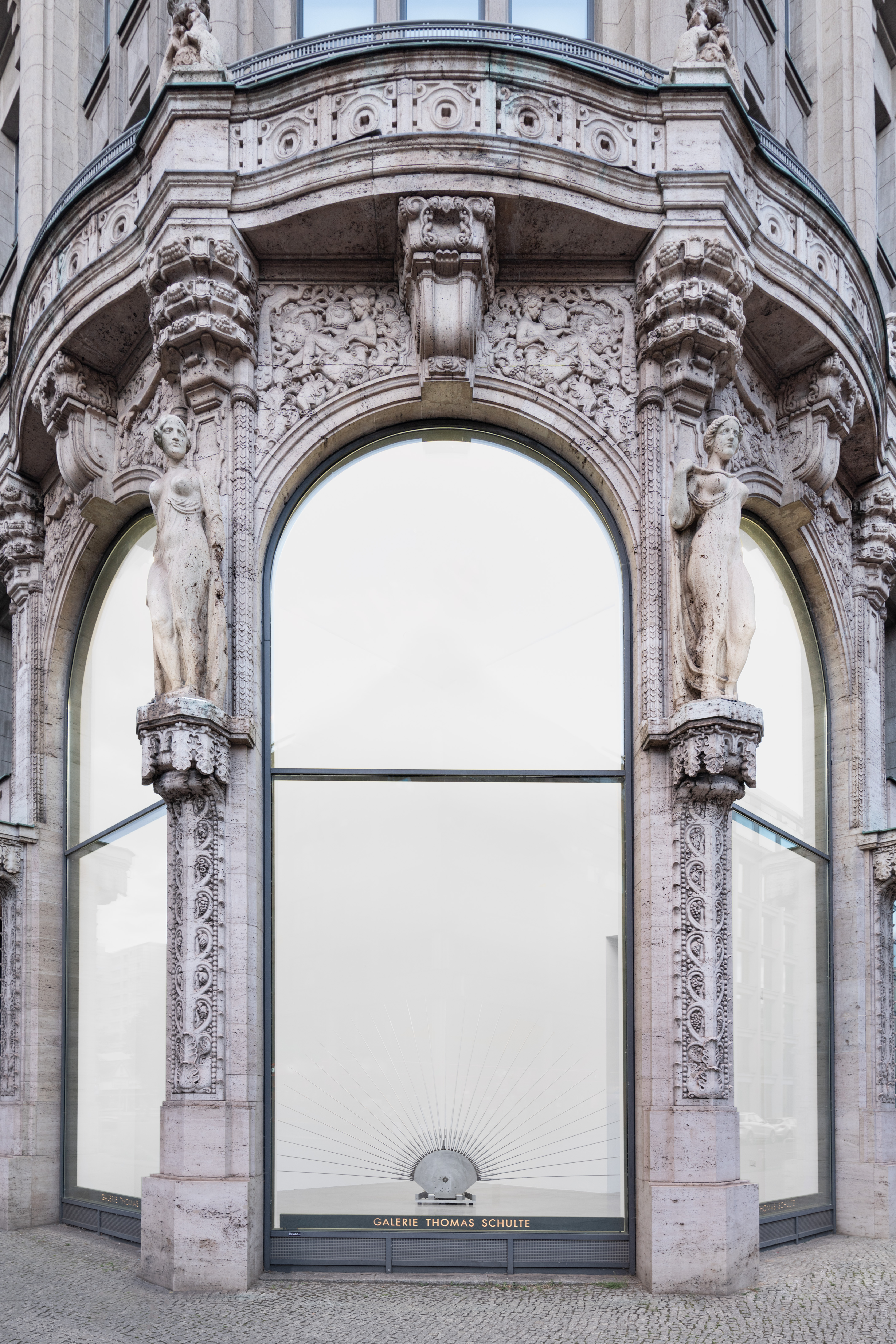 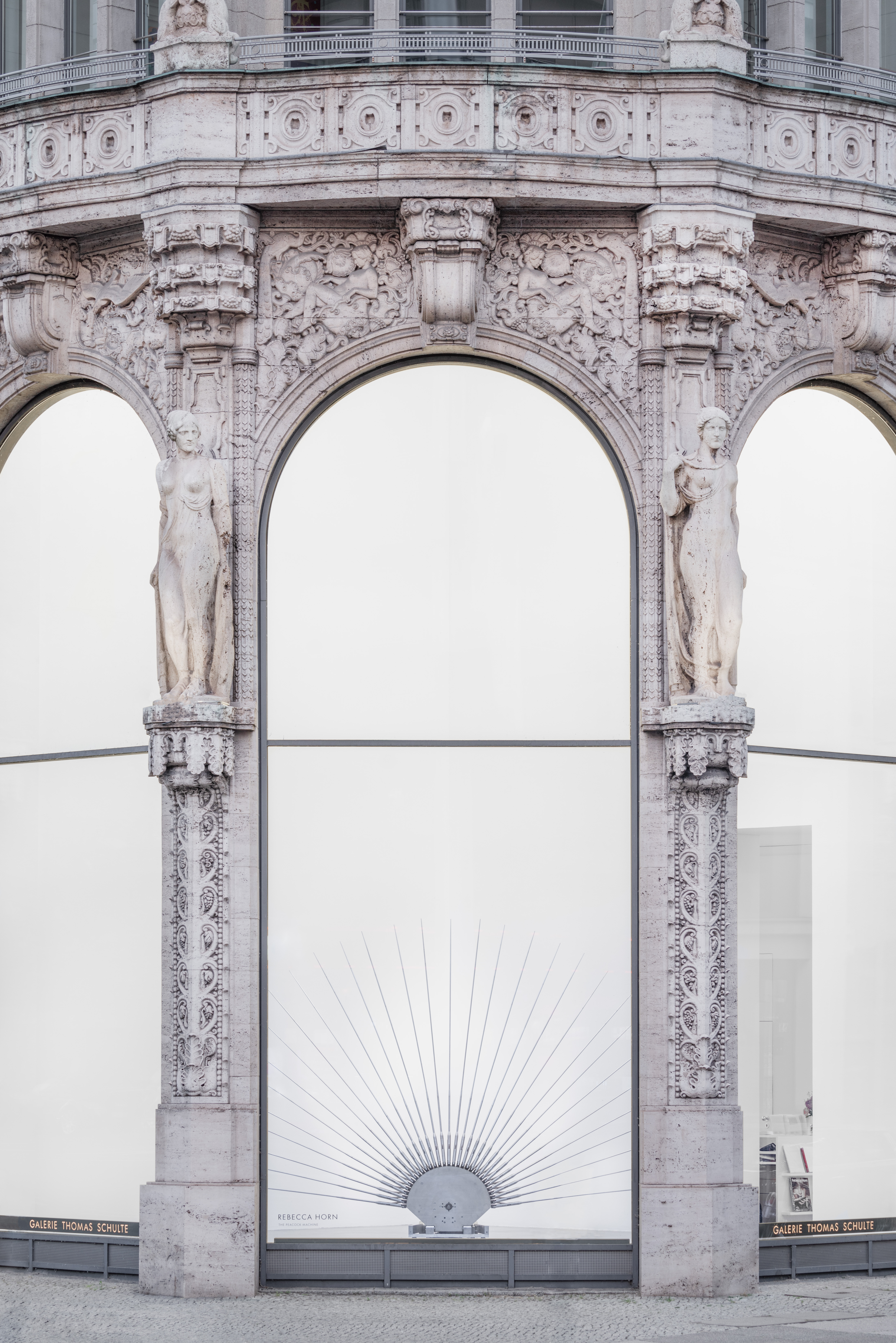 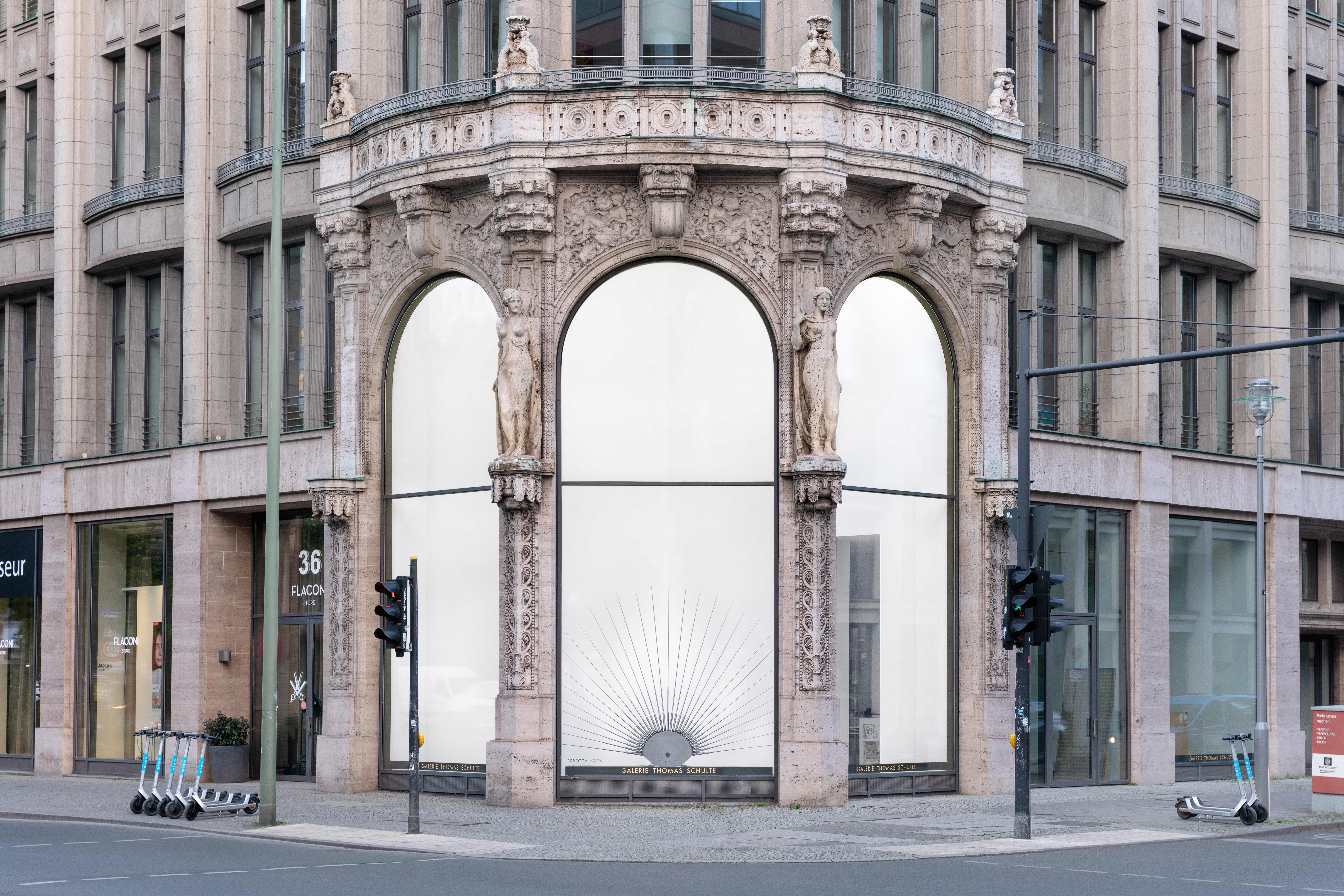 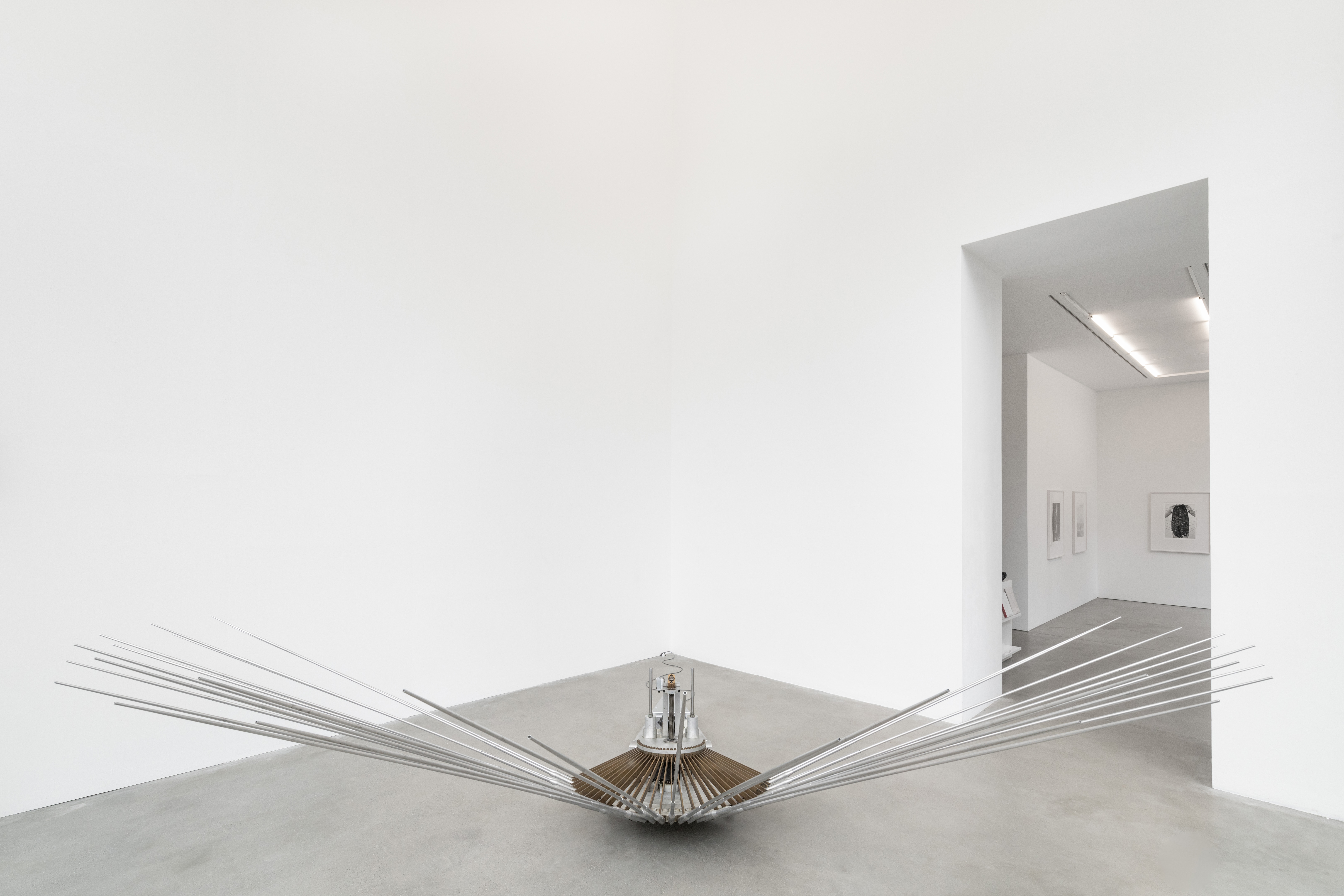 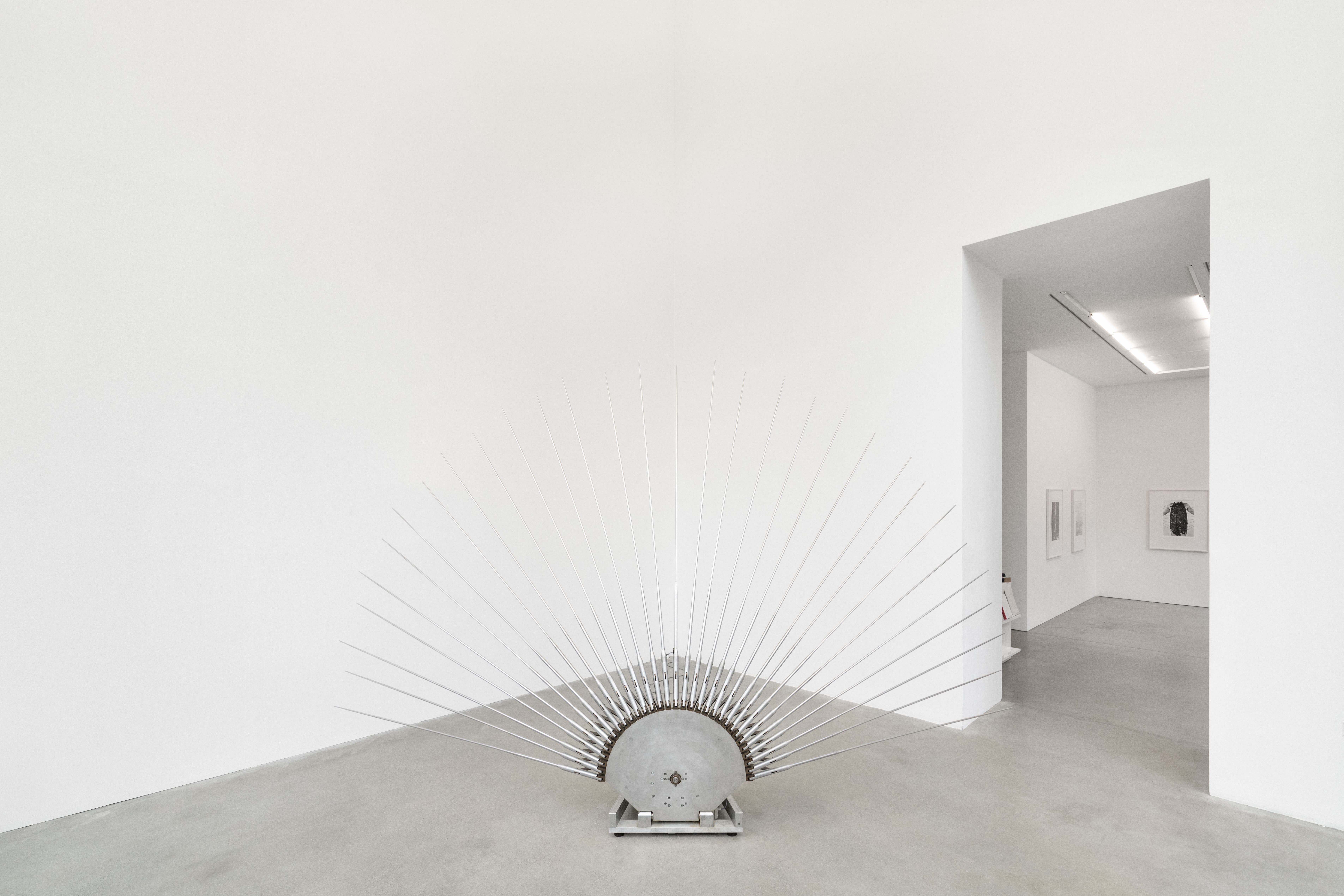 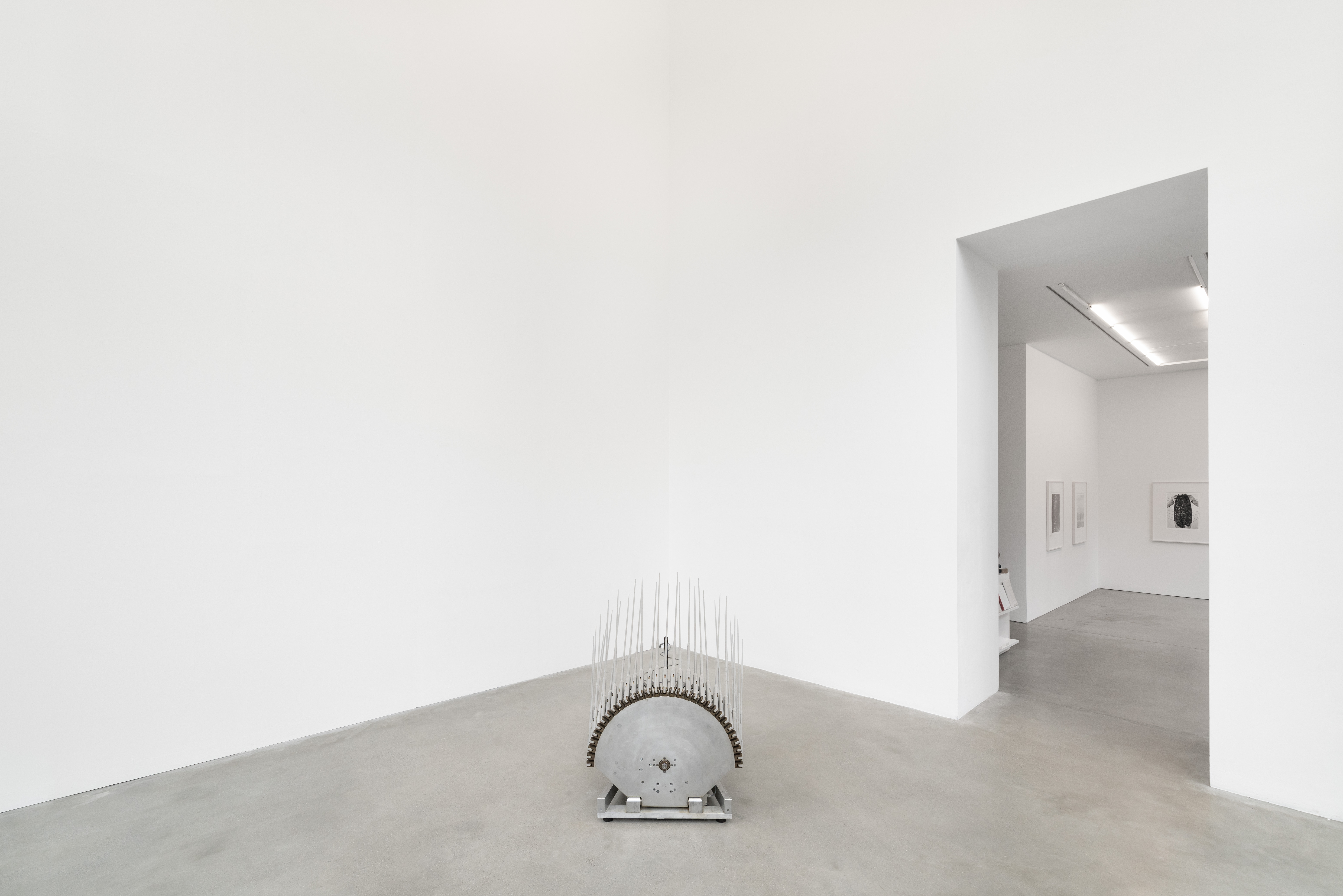 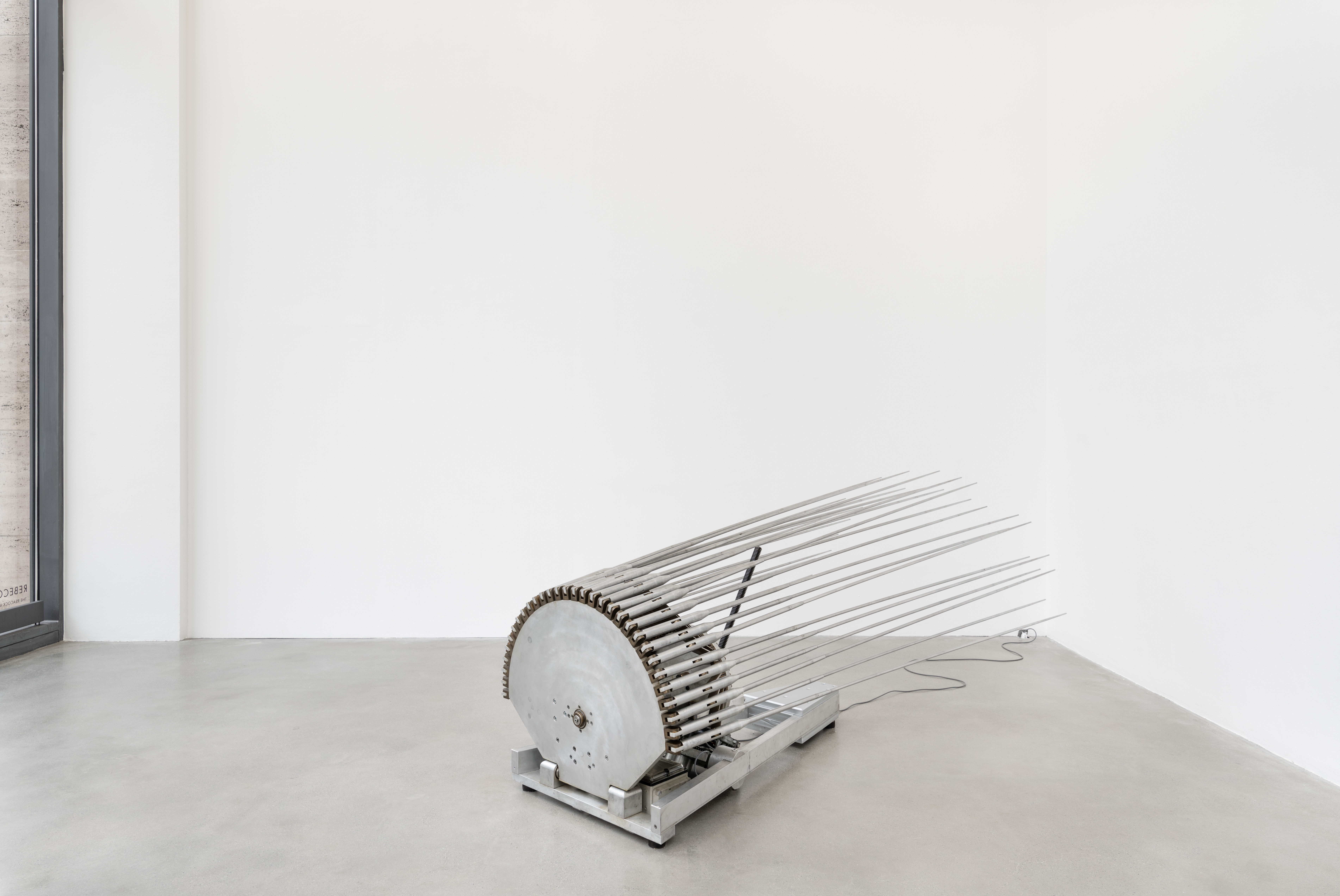 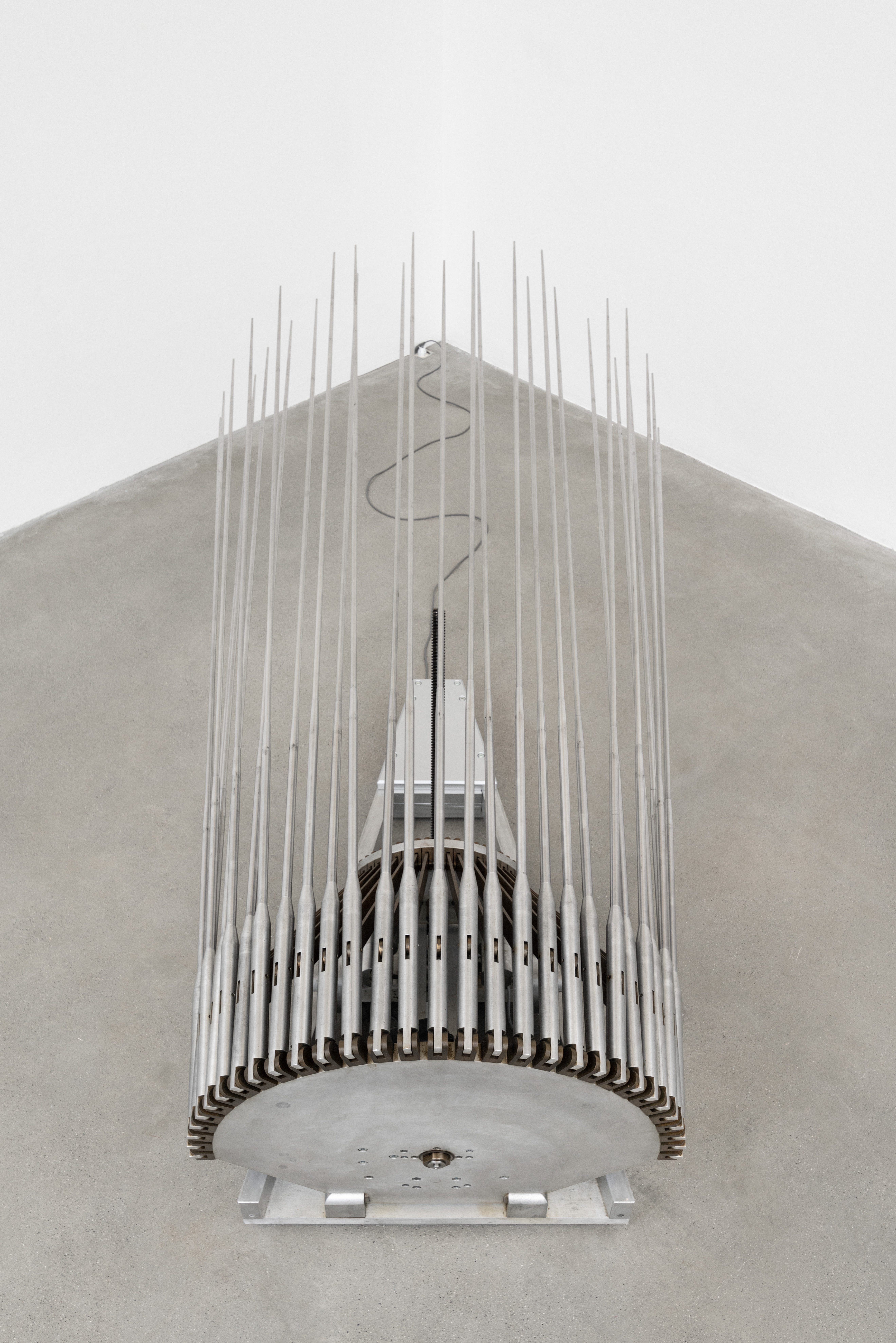 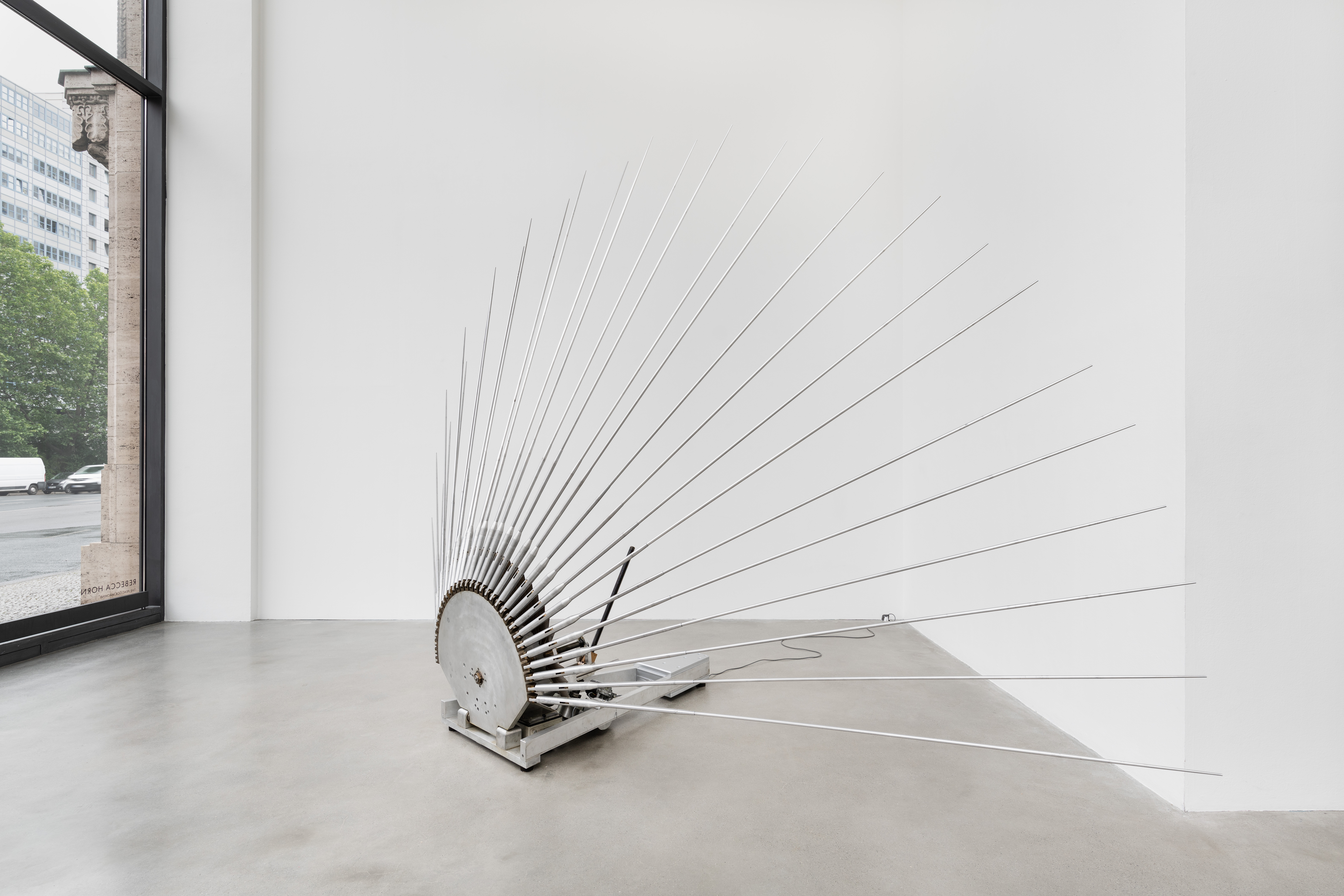 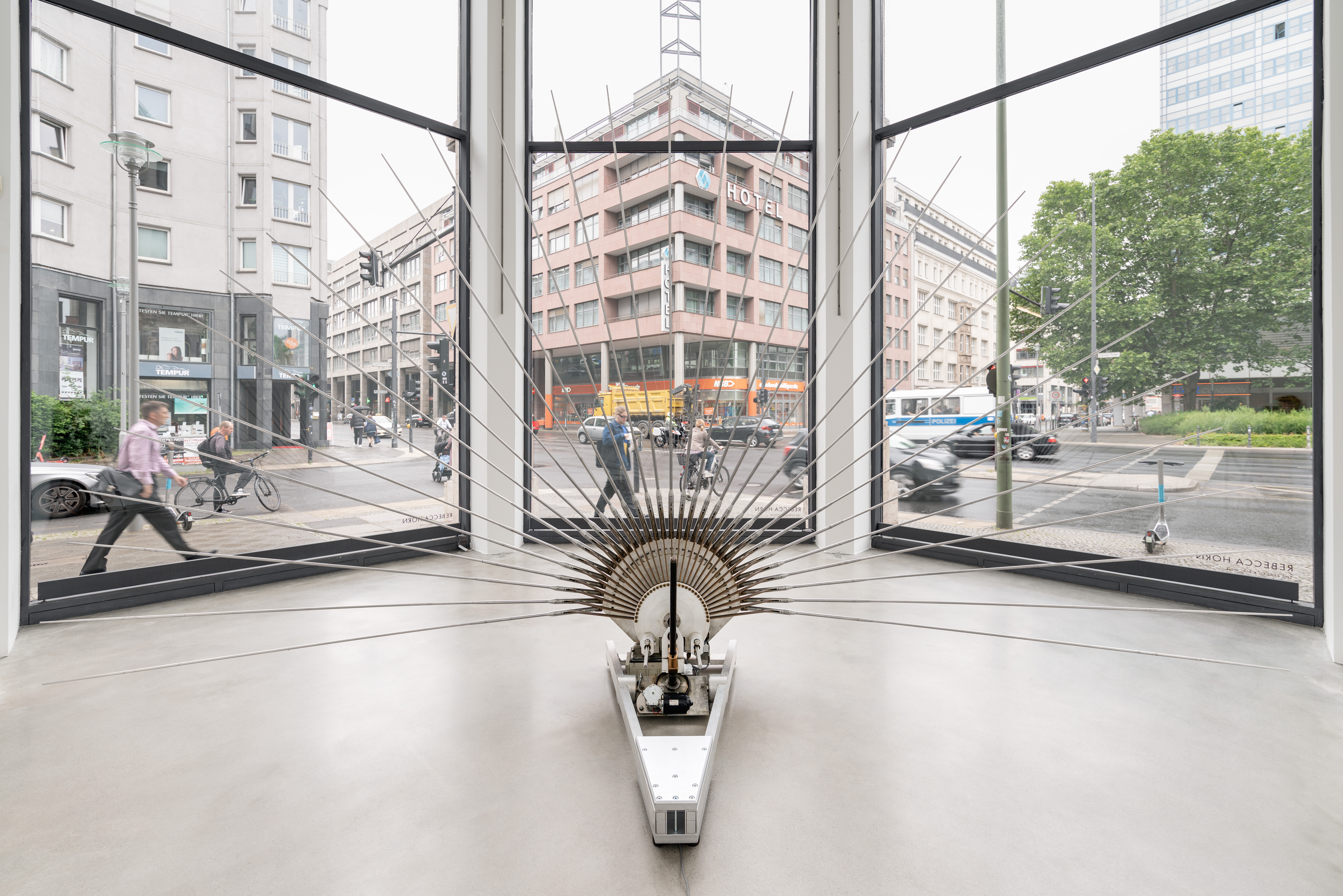 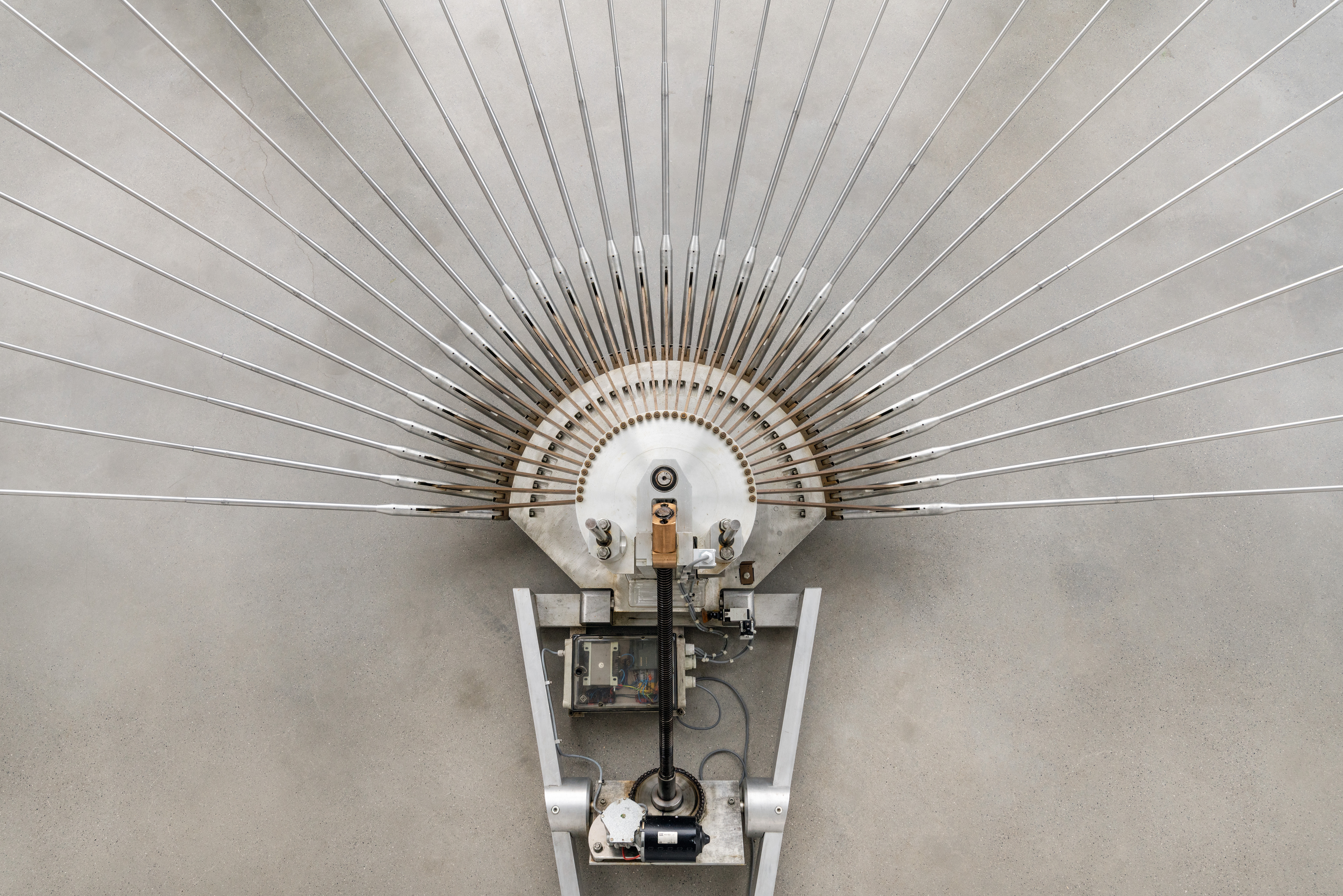 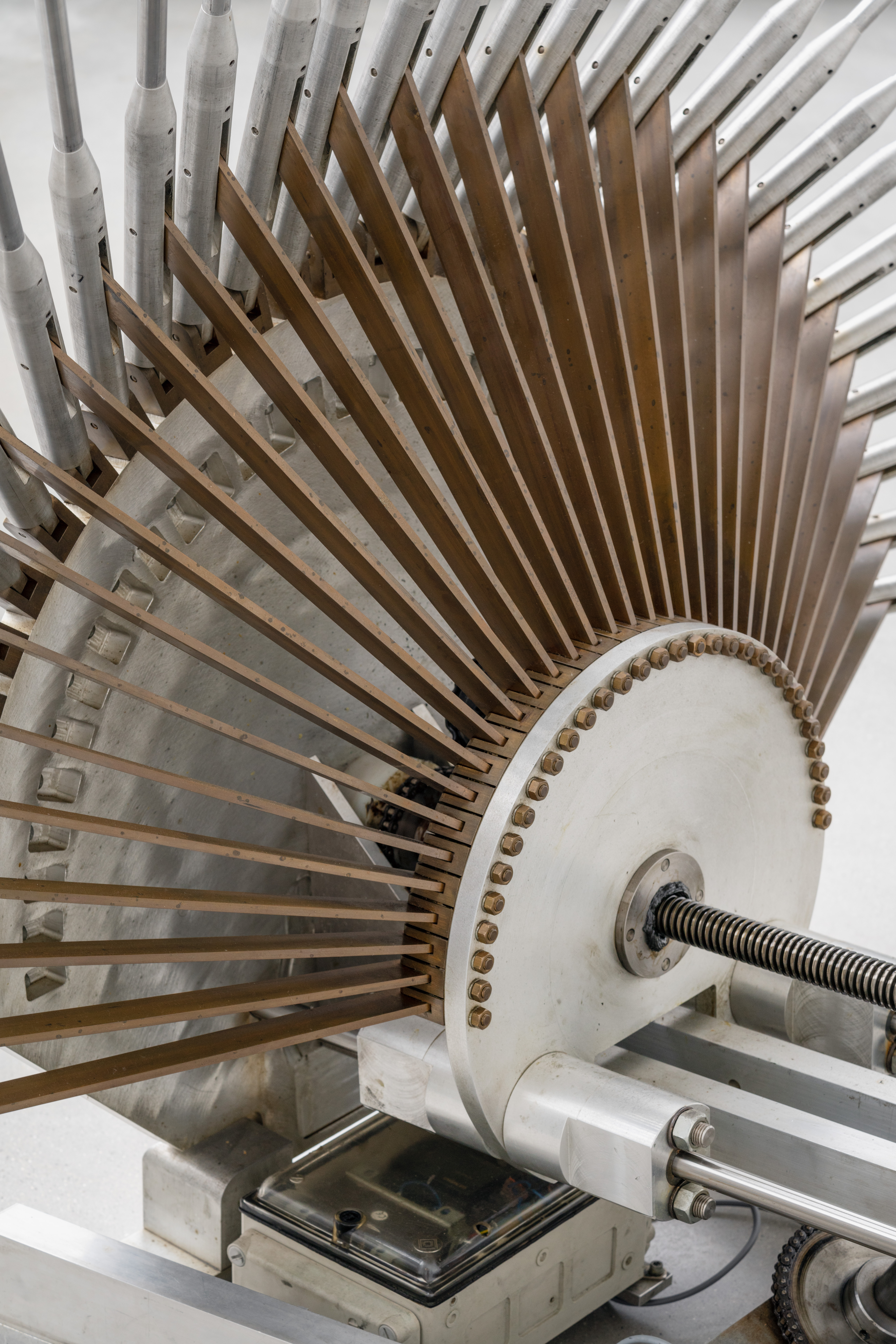 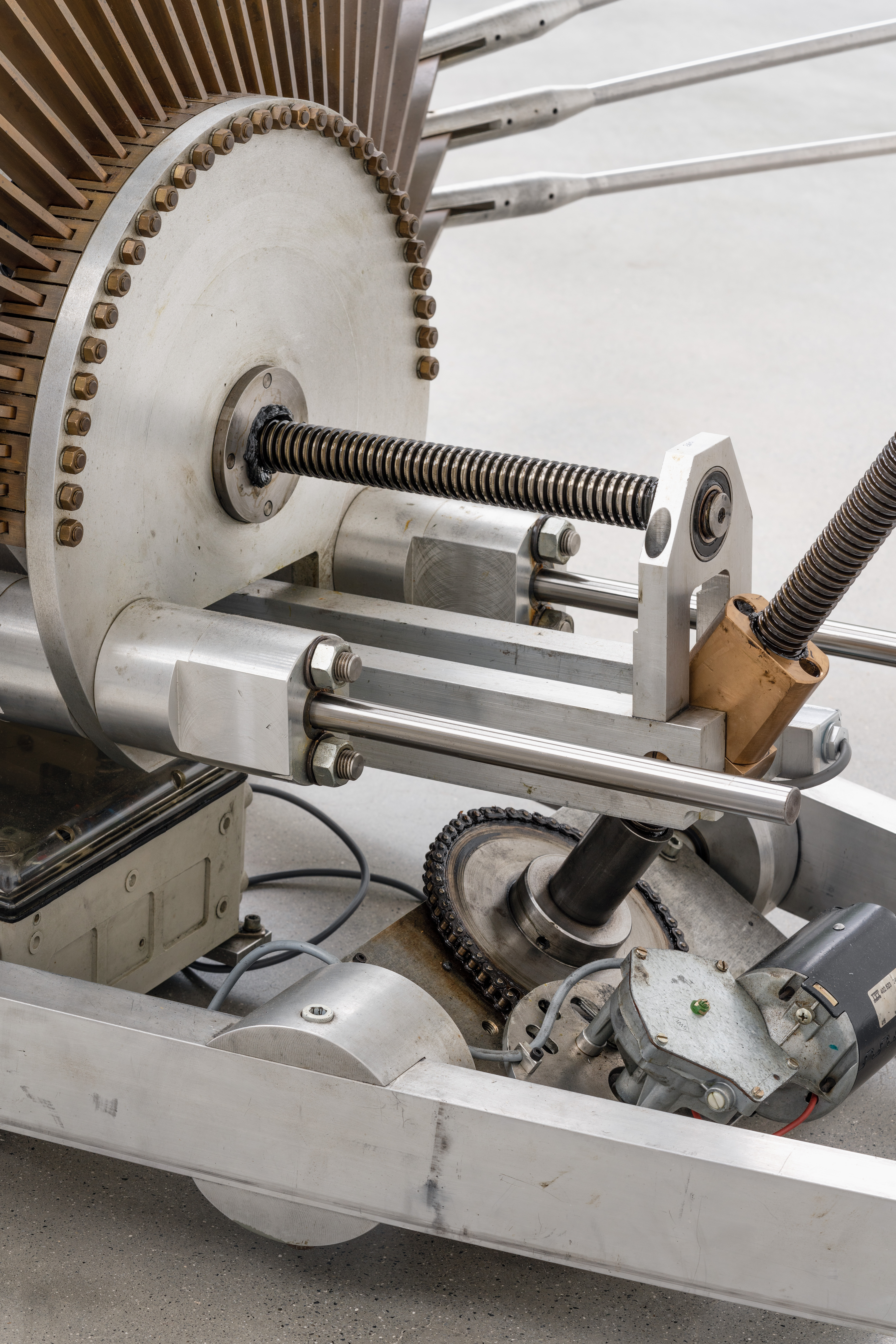 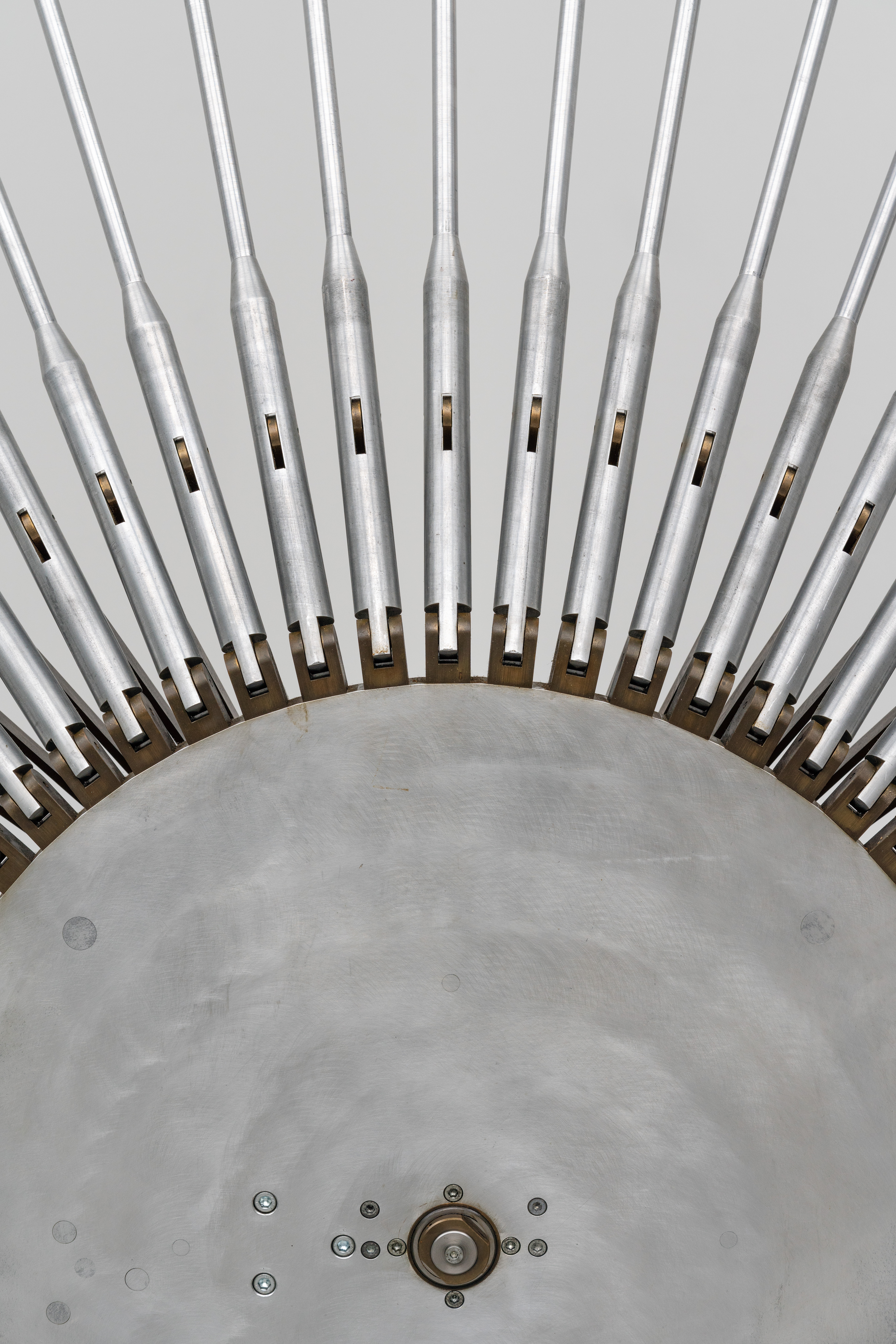 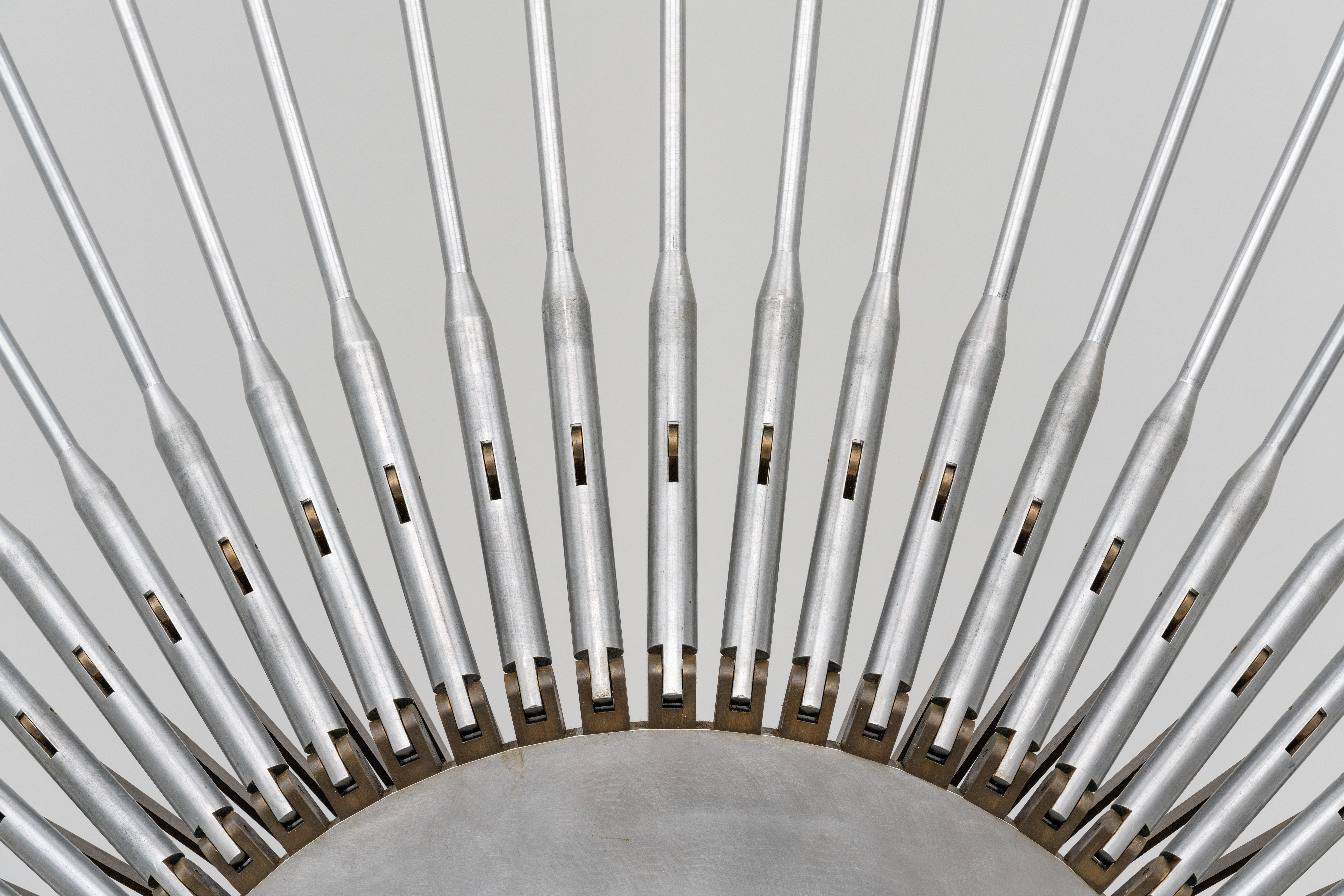 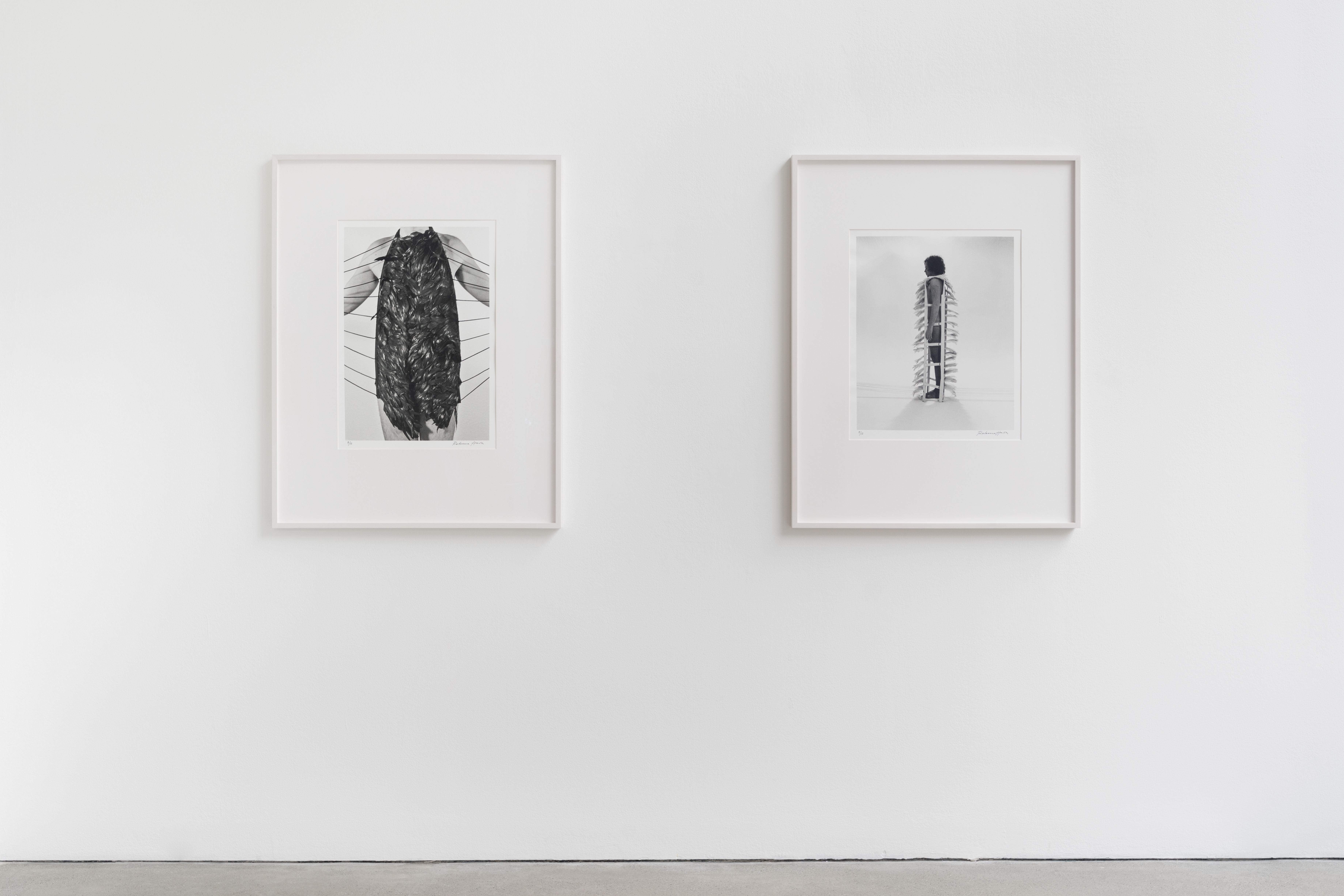 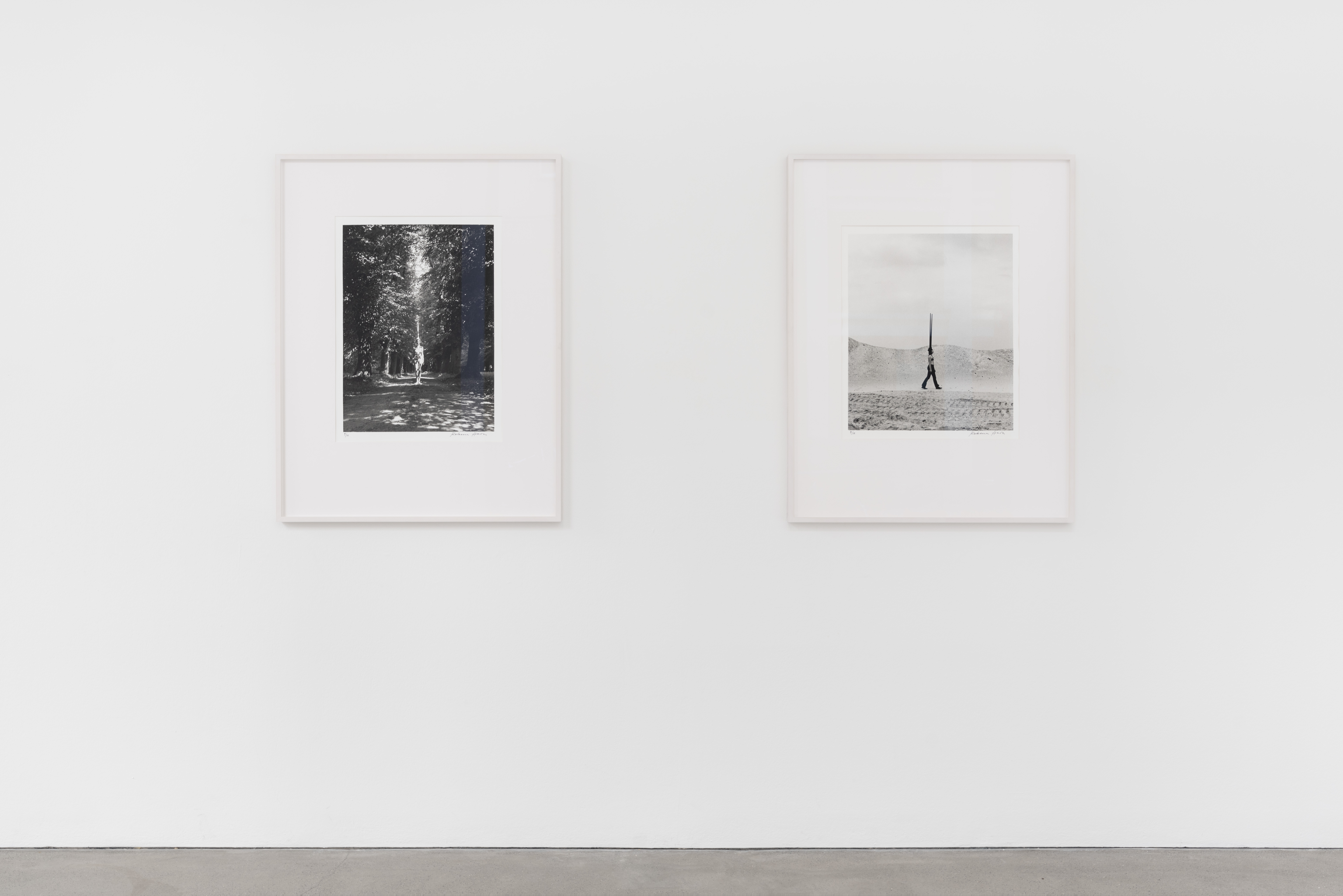 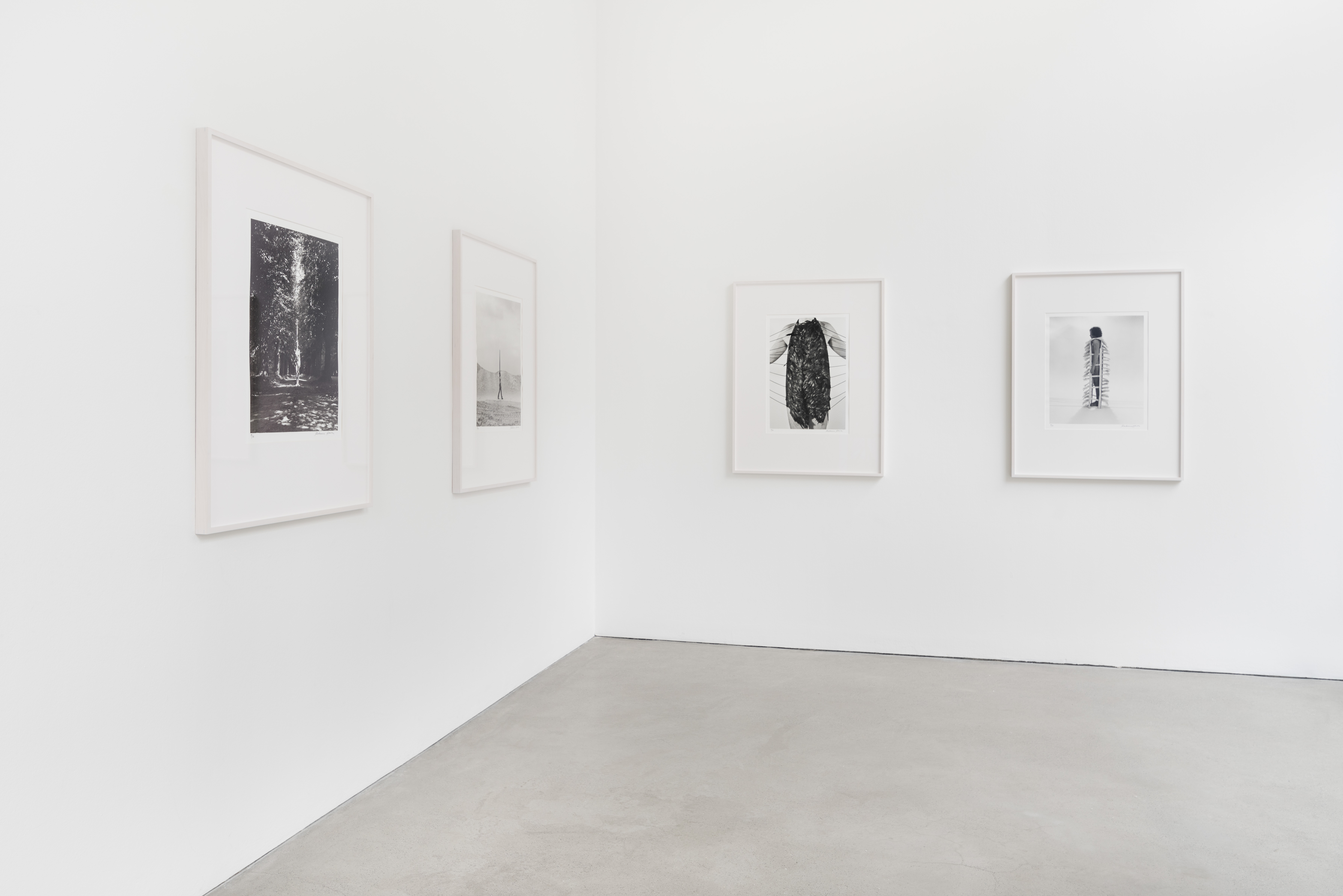 The summer of 2022 marks the 40th anniversary of Rebecca Horn’s iconic work, Peacock Machine, following its unforgettable debut at documenta 7 in Kassel in 1982. In celebration of this occasion, Galerie Thomas Schulte will exhibit the Peacock Machine in the gallery’s corner space, recreating the small temple-like structure in which it was originally shown.

In her poem, Horn writes of the Peacock Machine, “sparked by the cries of the courting male peacocks, a machine in the center of the eight-sided temple begins to stir and spreads its long metal feelers fan-like into the room, in deep concentration, startled as it brushes against the wall, soothed by the sound of the golden waterfall, the opened semicircular fan dips down to the floor protectively closing off the room” (Kassel, 1982)

Emerging from her performative work of the 1970’s, the early 1980’s saw body extensions, masks, feather robes and fans progressively being replaced by machine works. A year before the debut of the Peacock Machine, Horn developed a similar kinetic sculpture using real white peacock feathers for her feature film La Ferdinanda: Sonata for a Medici Villa. In fact, it was during filming in the Medici Villa Garden that this transition from performance to machine work was sparked. As Horn describes, watching the peacocks who lived in the garden, she observed that male peacocks develop their magnificent tail feathers throughout the year, only to display them in their full growth during the four-week mating season. By September, peacocks will have fully shed their feathers. It was the disappointment she felt after watching peacocks lose their feathers, which prompted Horn to construct her first peacock machine.

This marked the beginning of her particularly distinct method of machine production, typically involving large kinetic installations. From that point on, the works began to take on a life of their own, replacing though not necessarily imitating the human body. As Horn describes the machines “have a soul because they act, shake, tremble, faint, almost fall apart, and then come back to life again. They are not perfect machine (…) I’m interested in the soul of a thing, not the machine itself. I work closely with my technician, who actually builds the machines, but I know how they will look and function. It’s the story between the machine and its audience that interests me.”

While often constructed with technical precision using hard, cold materials, Horn‘s works – in concert with their temporal spacing and ritualistic movements – are emotive and sensual, often striking a balance between aggression and tenderness. In this way, Horn‘s bird and feather metaphor motif engenders a new form of visual poetry, legible in the Peacock Machine.

Having studied in Hamburg and London, from 1989, Rebecca Horn (born 1944 in Michelstadt, Germany) taught at the University of the Arts in Berlin for almost two decades. In 1972, she was the youngest artist to be invited by curator Harald Szeemann to present her work in documenta 5. Her work was later also included in documenta 6 (1977), 7 (1982) and 9 (1992) as well as in the Venice Biennale (1980; 1986; 1997), the Sydney Biennale (1982; 1988) and as part of Skulptur Projekte Münster (1997). Throughout her career she has received numerous awards including Kunstpreis der Böttcherstraße (1979), Arnold-Bode-Preis (1986), Carnegie Prize (1988), Kaiserring der Stadt Goslar (1992), ZKM Karlsruhe Medienkunstpreis (1992), Alexej von Jawlensky-Preis Wiesbaden (2007), Alice Salomon Poetik Preis, Berlin (2009), Praemium Imperiale Tokyo (2010), Pour le Mérite for Sciences and the Arts (2016) and, most recently, the Wilhelm Lehmbruck Prize (2017). A first mid-career retrospective of Horn’s work was organized in 1993 by the Guggenheim Museum, New York. It was the museum’s first solo exhibition dedicated to a female artist. The exhibition traveled to the Stedelijk Van Abbemuseum, Nationalgalerie Berlin, Kunsthalle Wien, Tate Gallery and Serpentine Gallery in London, and the Musée de Grenoble. A second retrospective was presented at the Hayward Gallery in London in 2005. Another retrospective took place at Martin-Gropius-Bau in Berlin in 2006. In 2019, two major exhibitions of her work took place simultaneously at Centre Pompidou Metz and at Museum Tinguely in Basel.