Interview: A conversation with Carolin & Gernot Seeliger from HEIT / Berlin 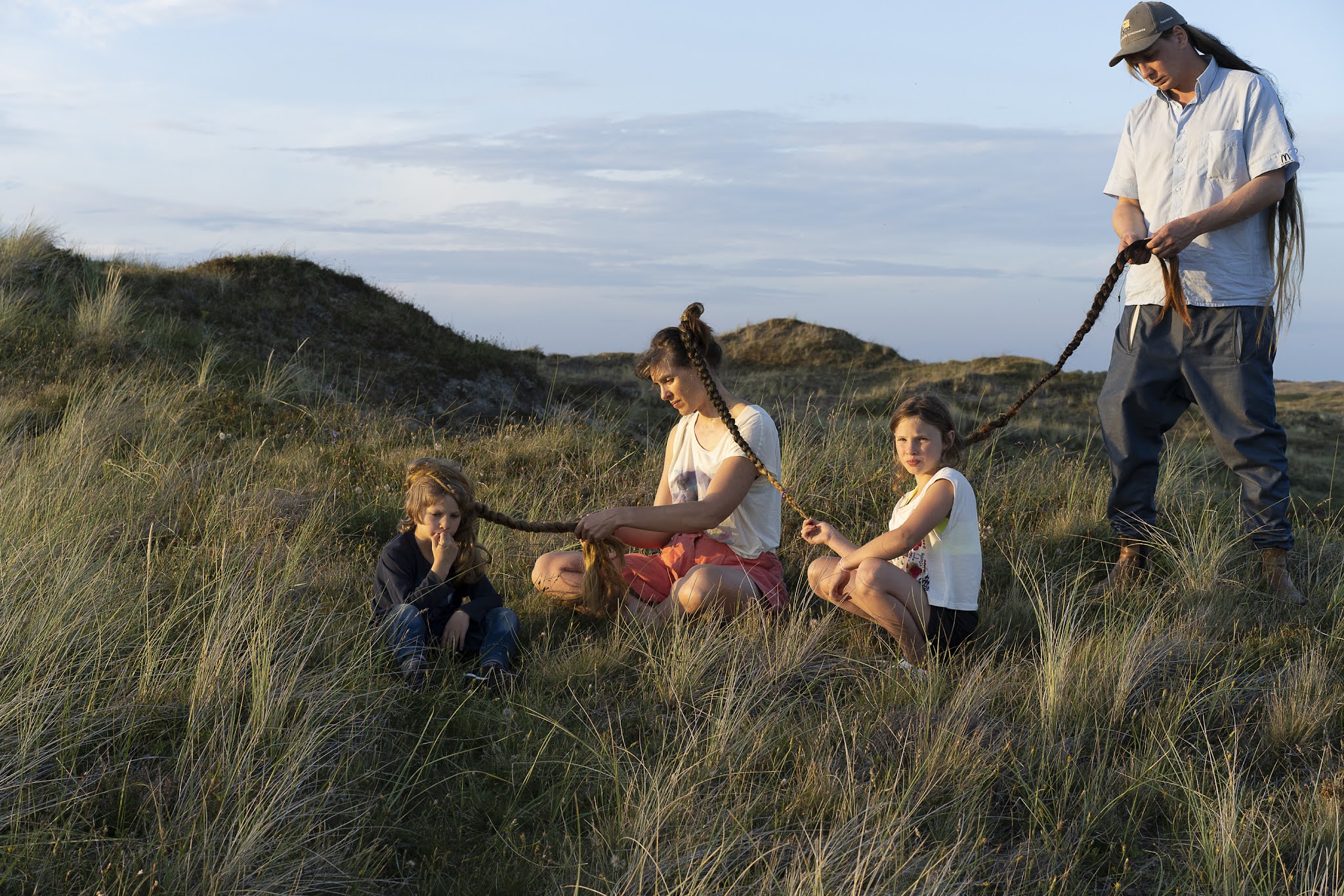 Tula Plumi: HEIT was founded 10 years ago. Can you tell us how it all started?

Gernot Seeliger: It started with a lot of renovation and physical work. The location that Marius Glauer discovered was a former SM-Club and needed a makeover. We had the plan to build another darkroom, because we were four photographers at that time. Marius Glauer, Maria Laub, Carolin Seeliger and me. We wanted to develop our prints there and use the rest of the location which included a little bar for exchanging ideas with our colleagues and fellow artists. But already after one year of renovation it became clear that the first idea for the space - a private salon and darkroom - was obsolete. Stepping out of our comfort zone of a private showroom and showing exhibitions in a public space became more tempting for us now. At that time Marius Glauer began his studies at UDK and this gave us the first impulses towards the first exhibitions at HEIT. Unfortunately, at this time Maria moved back to Copenhagen and left the rest of the team during the first year. Since 2017 Carolin and I are running HEIT as a duo. 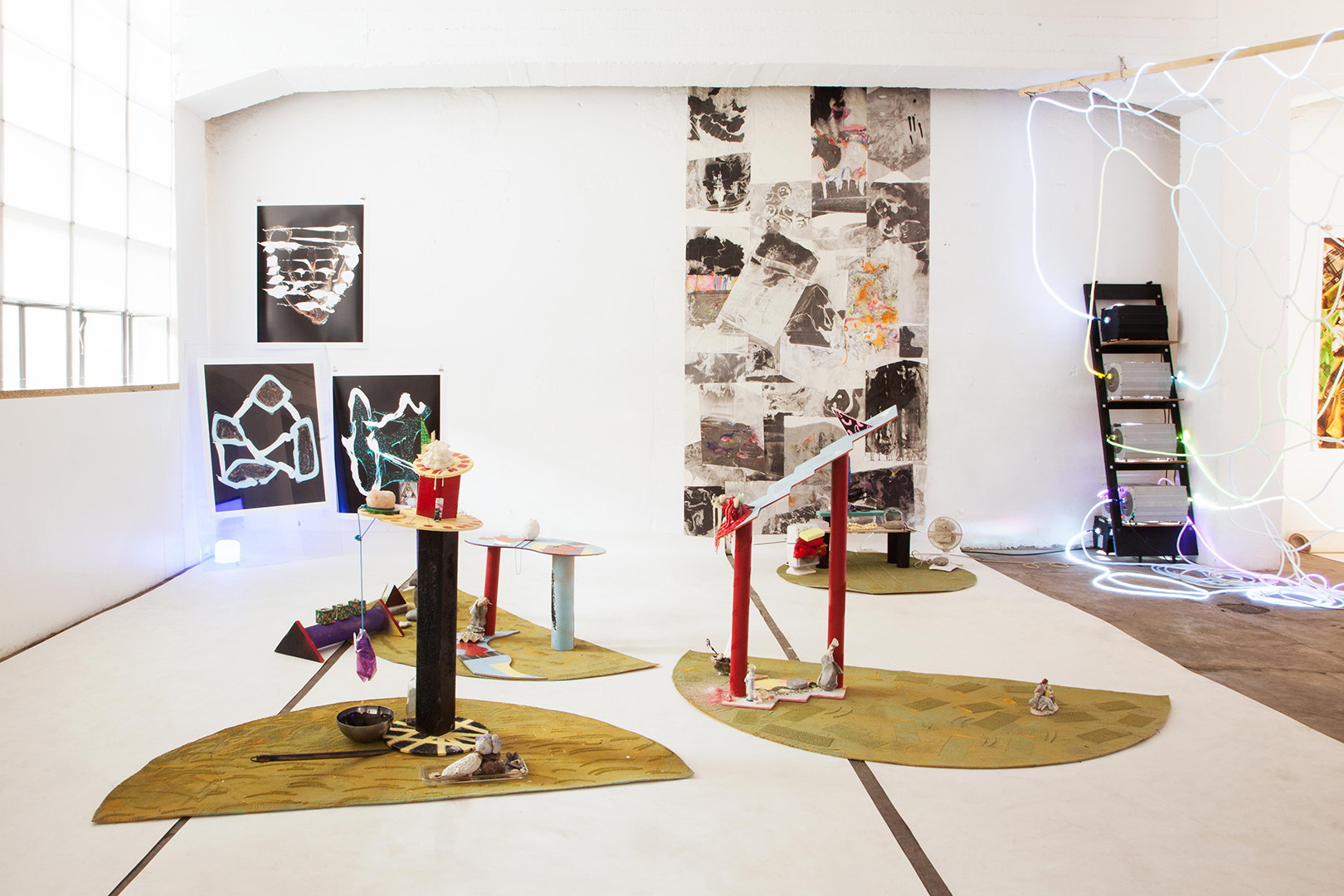 Heit at BSMNT - Howl of the Coconut

Tula Plumi: How did you come up with the name?

Carolin Seeliger: We chose the suffix HEIT as the name for our gallery, because we think it is exciting that the suffix only gets meaning in combination with another word. This is also what we – figuratively – want to create in our work with the artists: We invite them not just to come into our space and present their own work, but to connect with the space itself in their artistic practice so that something new and meaningful emerges.

TP: Your space is very special. It's underground, low-ceiling and it reminds you of a cave or a labyrinth. How did you choose it and how did you modify it over time? Is it a challenge to place works in this particular architectural space?

C.S. and G.S.: At first, we were very happy to find a place that is so charged with a special atmosphere. Not having  a “white cube” as our exhibition space made us more ambitious right from the start. However, we had to learn to deal with the limitations that come with the low ceiling and the cave-like feeling of the rooms. But in most cases we've learned to see it as an advantage that we had to develop new and unconventional ways of installing. Many of the works shown are created on site and are produced especially for this location, for example the work „Schablonen in Aktion“ by Theodor Dathe, Michel Wagenschütz and Paul Niedermayer that was an installation made from stucco manufactured onto the walls at Heit and made a brilliant comment on the narrow character of the venue.

Luckily we were allowed to change a lot of the architecture to fulfil our needs as best as possible. The room became like a sculpture itself that we've formed in endless hours according to the needs of the art that was shown there. The artists' interventions have also resulted in architectural changes such as the removal of walls and thus the emergence of new visual axes.

When the artists engage in this challenge, the work takes on a meditative character, cut off from the world; in the basement, without daylight, usually without cell phone reception, one enters into a unity with Heit and loses the sense of space and time. 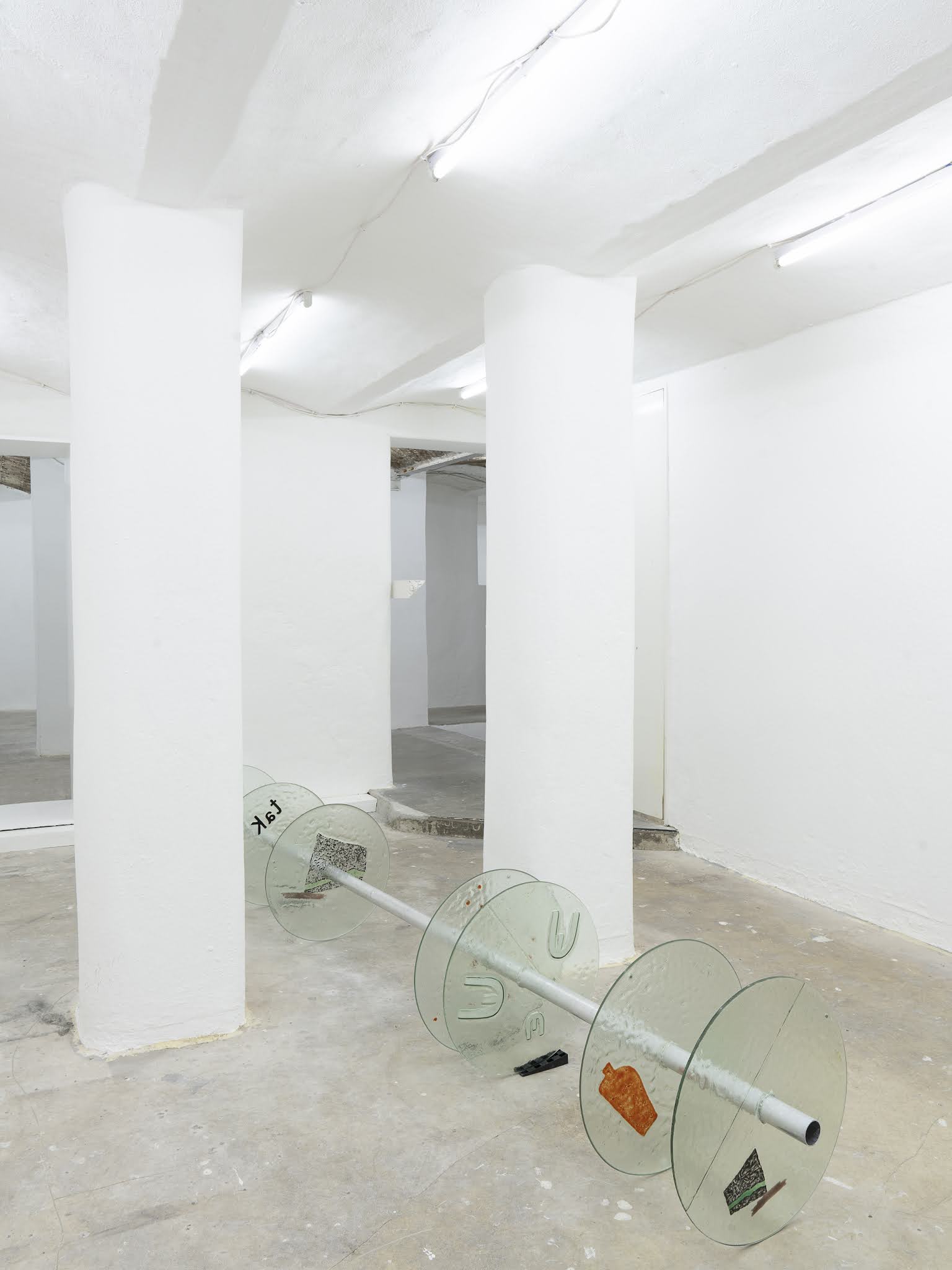 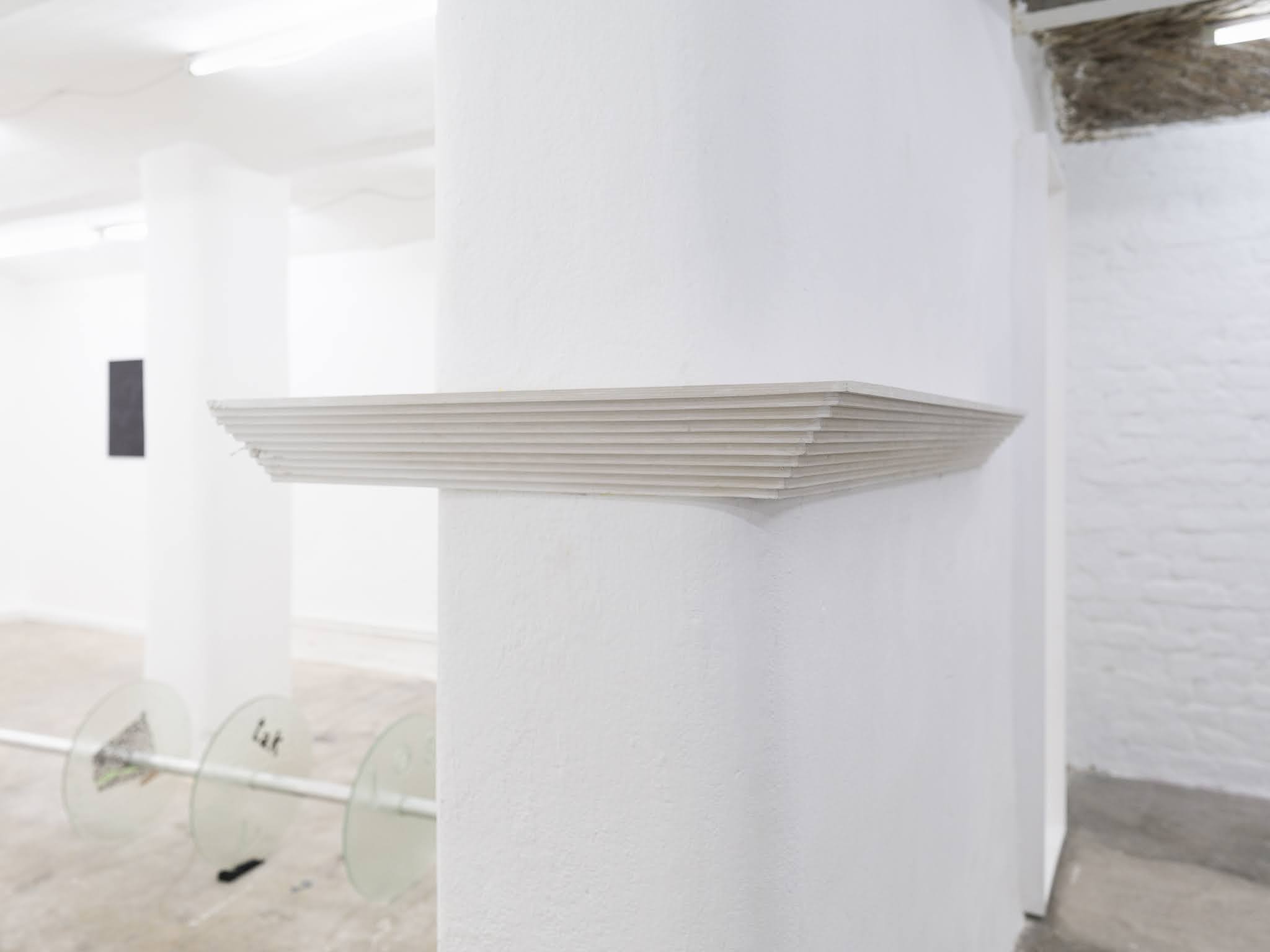 TP: HEIT was closed in 2020 because of COVID-19.  What is it like to return after a one-year break. Do you think the pandemic has affected the behaviour and number of visitors?  Also, have you had time to reflect on your journey so far and to plan your future projects?

C.S.: The Covid-related break gave us the opportunity to pause in the middle of the operation, to take a step back and from this distance to take a new look at Heit and to reflect on the past path. So it felt very fresh to start an exhibition series again after a year and a half with the help of the funding of Neustart Kultur. Certainly, a new awareness of the social significance of exhibitions has grown among us as hosts, but also among the artists. 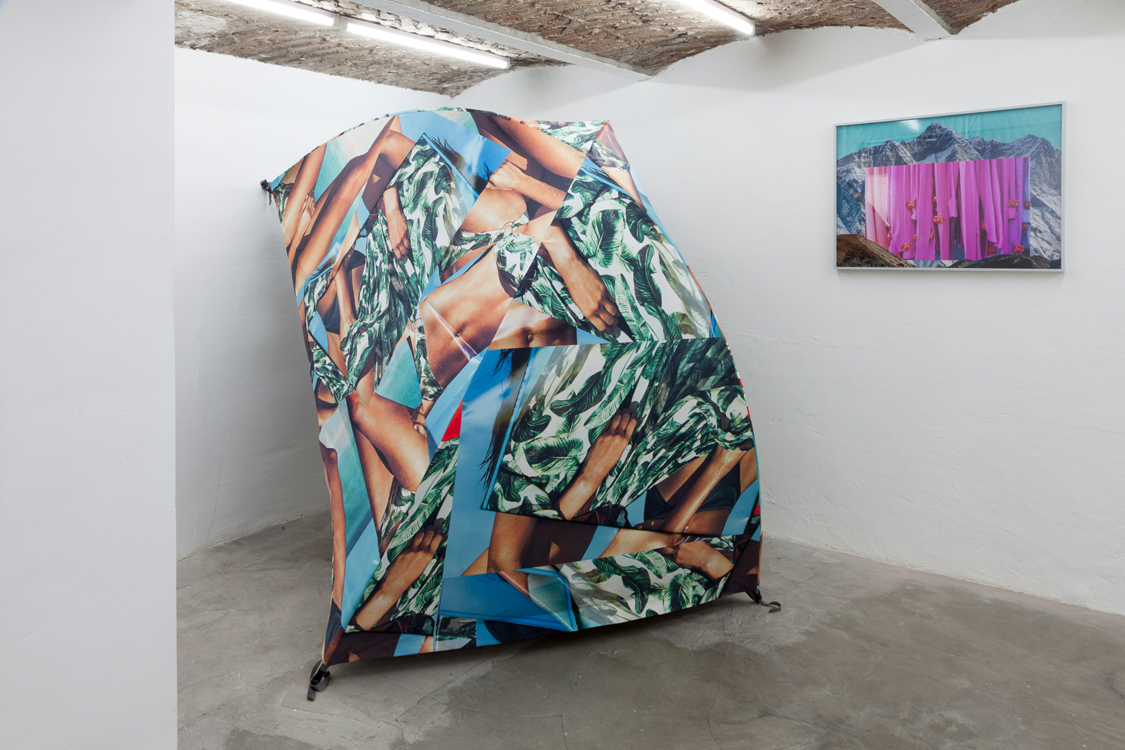 TP: What’s your favourite show at  Heit  so far?

C.S.: It is very difficult to decide on one favourite, but I would like to share one very special experience with you: The duo “Maik alles Gute” built a sauna into the Heit, whose infusions were extracts from the air from various service locations in Berlin (kindergarten, funeral home, cell phone repair service, etc.). At the opening there was a live sauna which people could sign up for, building a living fresco, which the rest of the audience was able to watch through the glass door. Afterwards, a sculpture was created by the used towels. The emergence of the actual artistic work during the opening and the collective experience and creation made “WENIK” a very memorable exhibition for me. 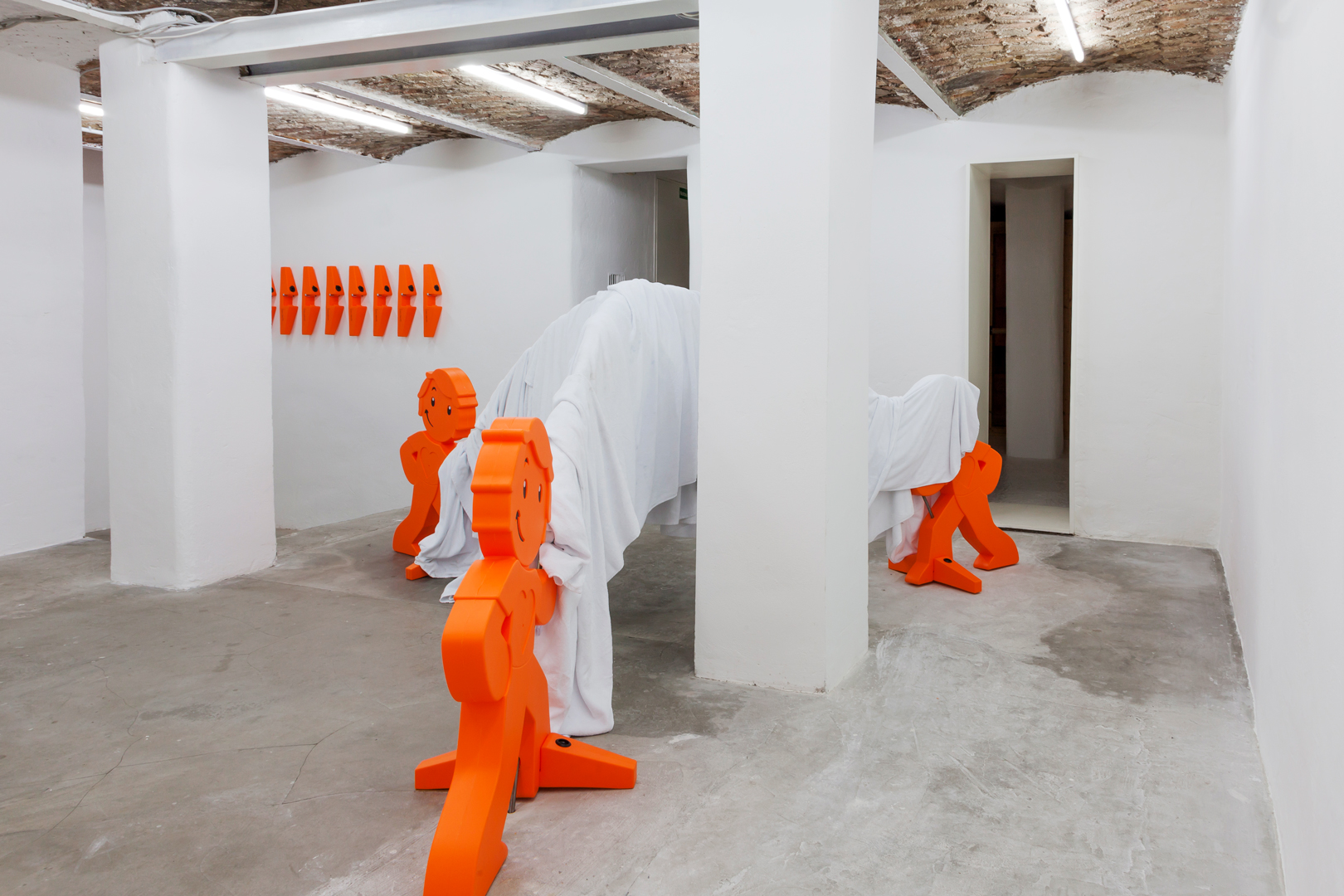 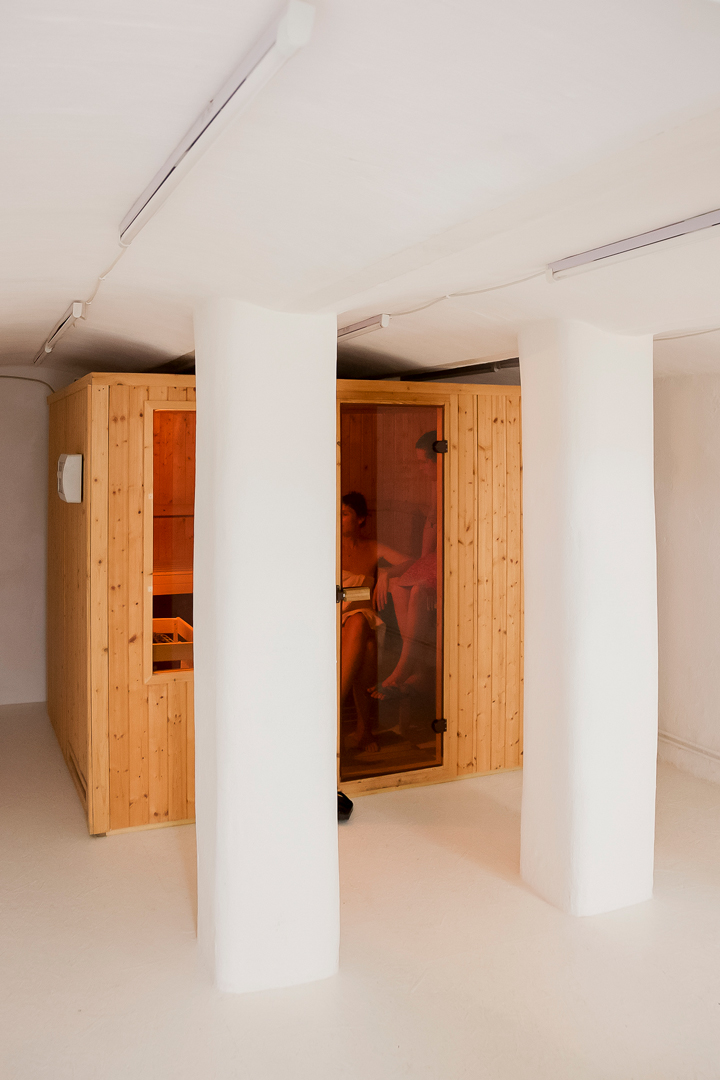 G.S.: One of my favourite shows so far that I would like to point out was “Troglodyt” by Dargelos Kersten and Anton Peitersen. It was at the time when Heit was in transition and was totally run down – the 2 artists underlined the cave feeling and created a humid and dark environment. At the entrance of the cavern one was given a torch to find the way through the exhibition. Strange blobs filled with water were hanging from the ceiling and eye sight was disturbed by nets that went through the room. In particular I liked the numerous details in this installation, especially when there was a synth drone played one evening and two leeches were released in a water basin. The leeches' shadows were projected at the wall by a single torch and it appeared as if they were dancing to the music. 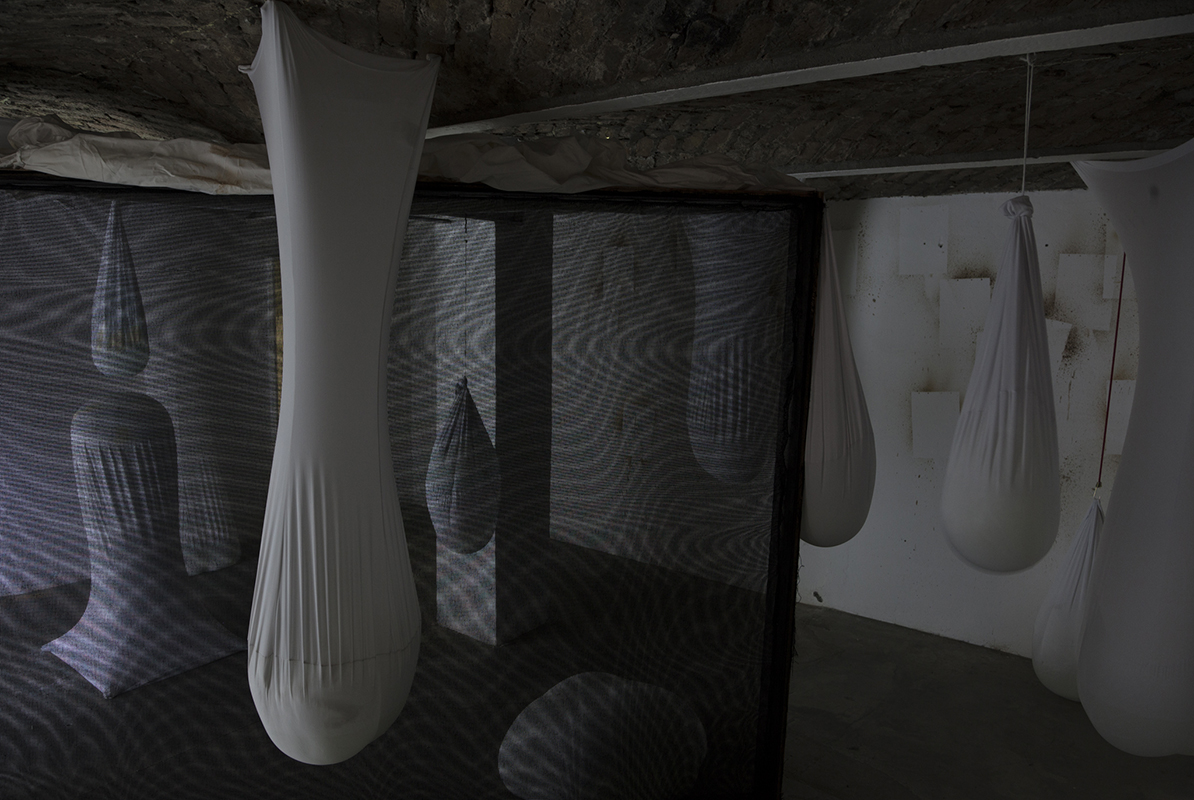 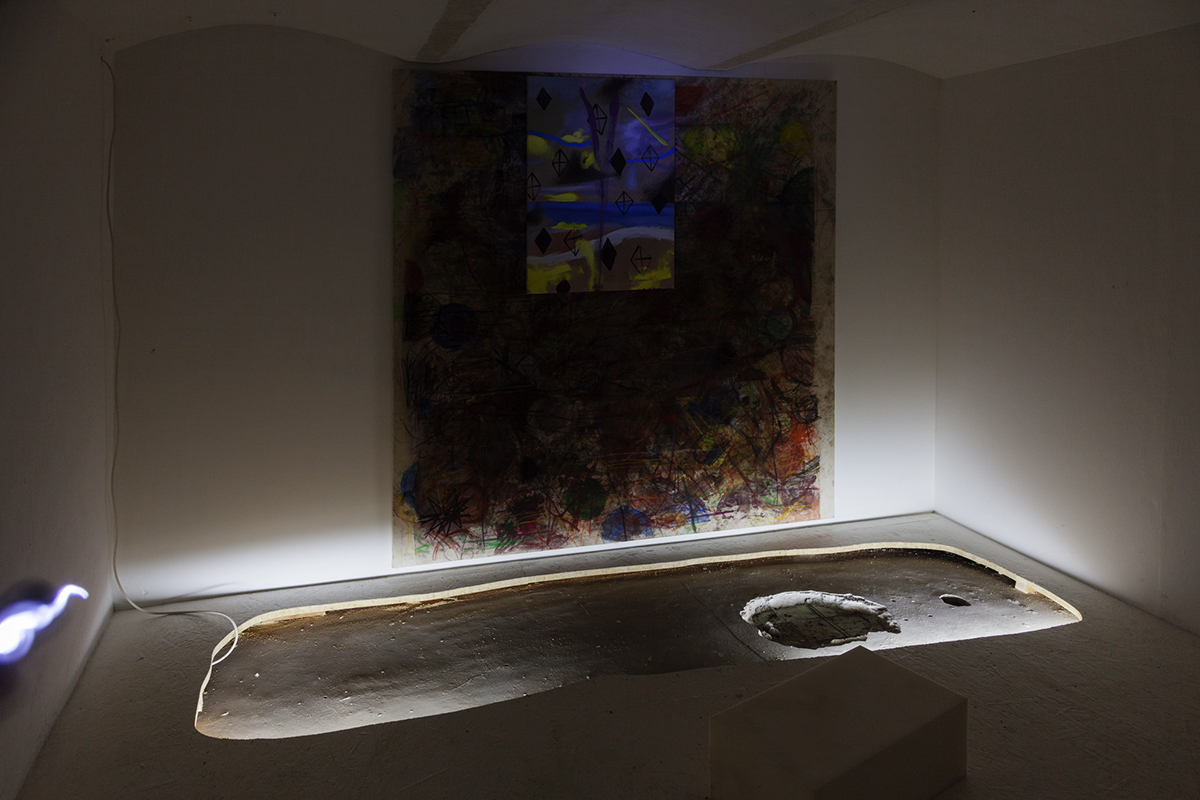 TP: Can you tell us a bit about Pegasus Product?

G.S.: Pegasus Product is a shared artistic practice between Dargelos Kersten, Anton Peitersen and Gernot Seeliger. Challenging one’s authorship and habits in creating art, blurring lines between art and design leads to installations often referring to interior furnishing. Sometimes a private or public place is represented or altered and then becomes a stage for a corresponding performance. For example at the current Installation Taxes & Tantra at Galerie Georg Nothelfer, Berlin. There is a massage salon built in the gallery where visitors can receive a tax consultation during a tantric massage. 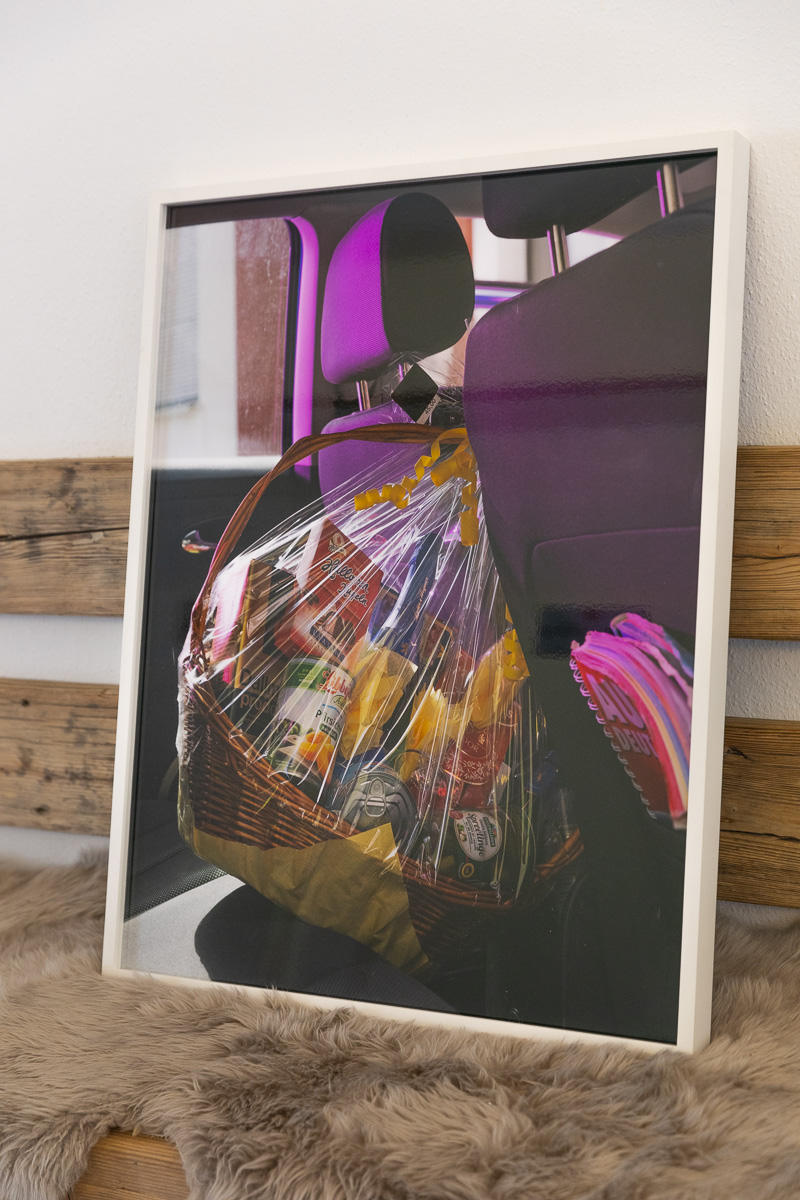 TP: How do you choose the artists you show?

C.S, G.S.: As you mentioned before, the Space is difficult and needs a tailored solution so we are looking for artists that can deal with dungeons.  In general we prefer an exciting installation over a commercial aspect. But also this doesn’t mean that it is installation based work all the time. Since we don't have a traditional artist list, we are free to make a varied program.

TP: What is the impact of parenting on your work, both as artists and gallerists? Is parenthood considered a taboo in the art world? What is your experience?

G.S.: When we started Heit our daughter was born. First of all, I think parenting is a big challenge for all who haven't set up their careers yet. You work with a very limited time frame and when you come home from the studio or the gallery you still can’t relax completely but you have to switch to family duties. It is hard for oneself to accept and also for the people you work with that you can’t be available 24/7. It is still necessary for us to set the right priorities work-wise and also to slow down from time to time.

I think Gallerist and Artist are jobs that have a lot of social events you want to attend and it’s not so easy to do this with little kids. There were for sure a lot of situations when we were afraid of missing out.

C.S.: I think that parenthood or children are not really taboo, but it is often preferred that the children do not appear at art shows. Strangely enough, children up to a certain age are denied an understanding of art and you don't even consider debate or exchange, which I think is adultistic (discriminating) behaviour. 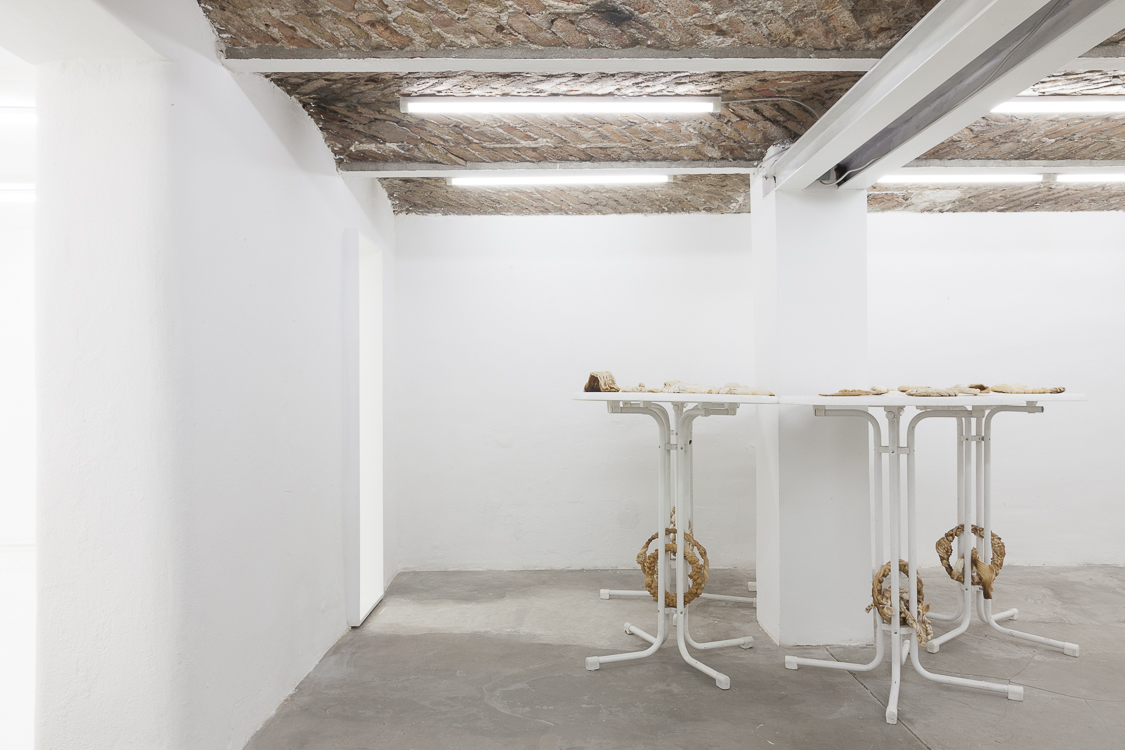 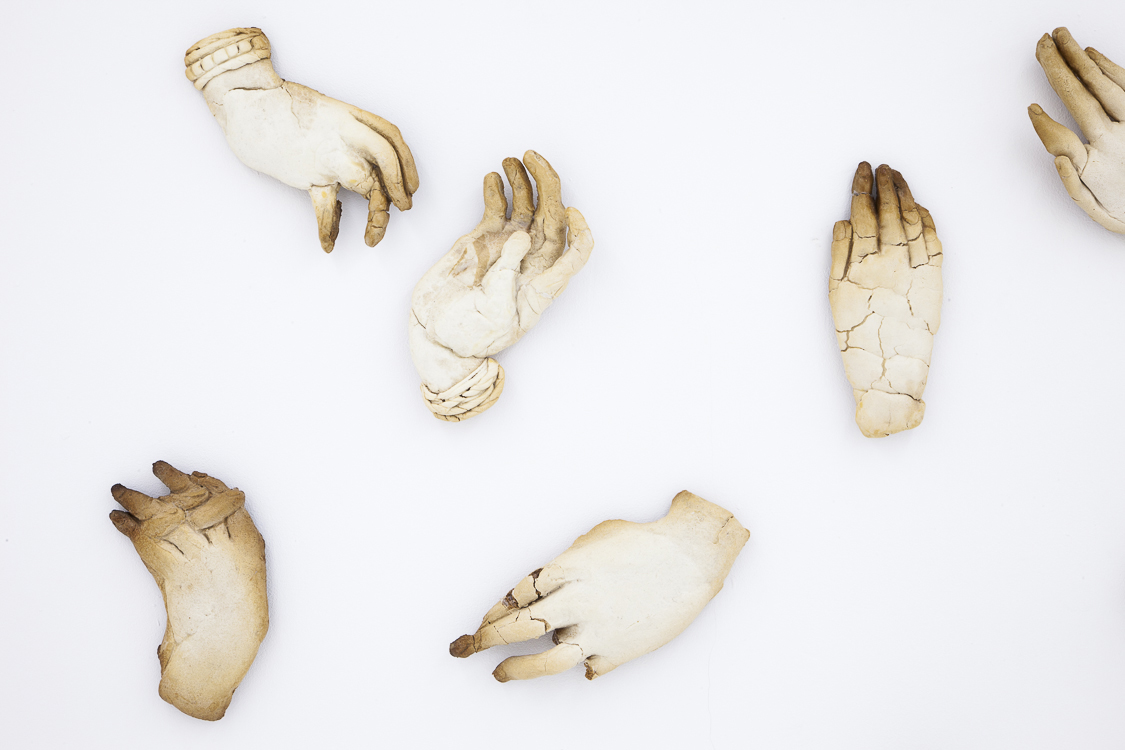 TP: I mentioned you before as gallery owners. I know that Heit started as a not- for- profit organization, however it has recently received financial support from the Neu Start Culture for the gallery sector. Which identity expresses you the most? Which facilitates the functioning of the space the best?

G.S.: Actually we started as a producers gallery - a gallery that is run by the artists who show their works and are working as a kind of collective to fulfil all the gallery tasks together.

However, this was more difficult than we thought, because we were more or less greenhorns with the business side of art and since then it has been a learning process that is still on.

Although sometimes there were doubts if it would be better to be non-profit and therefore get some funding, there was also a mentality and motivation among us that we wanted to see how far we could get as a sales based initiative. What is the price for independence? I think mainly because we are all artists ourselves, the question was what, besides the art pieces, creates an atmosphere for sales in the field we are working in? Can we create such a setting on our own? The honest answer would be: sometimes.