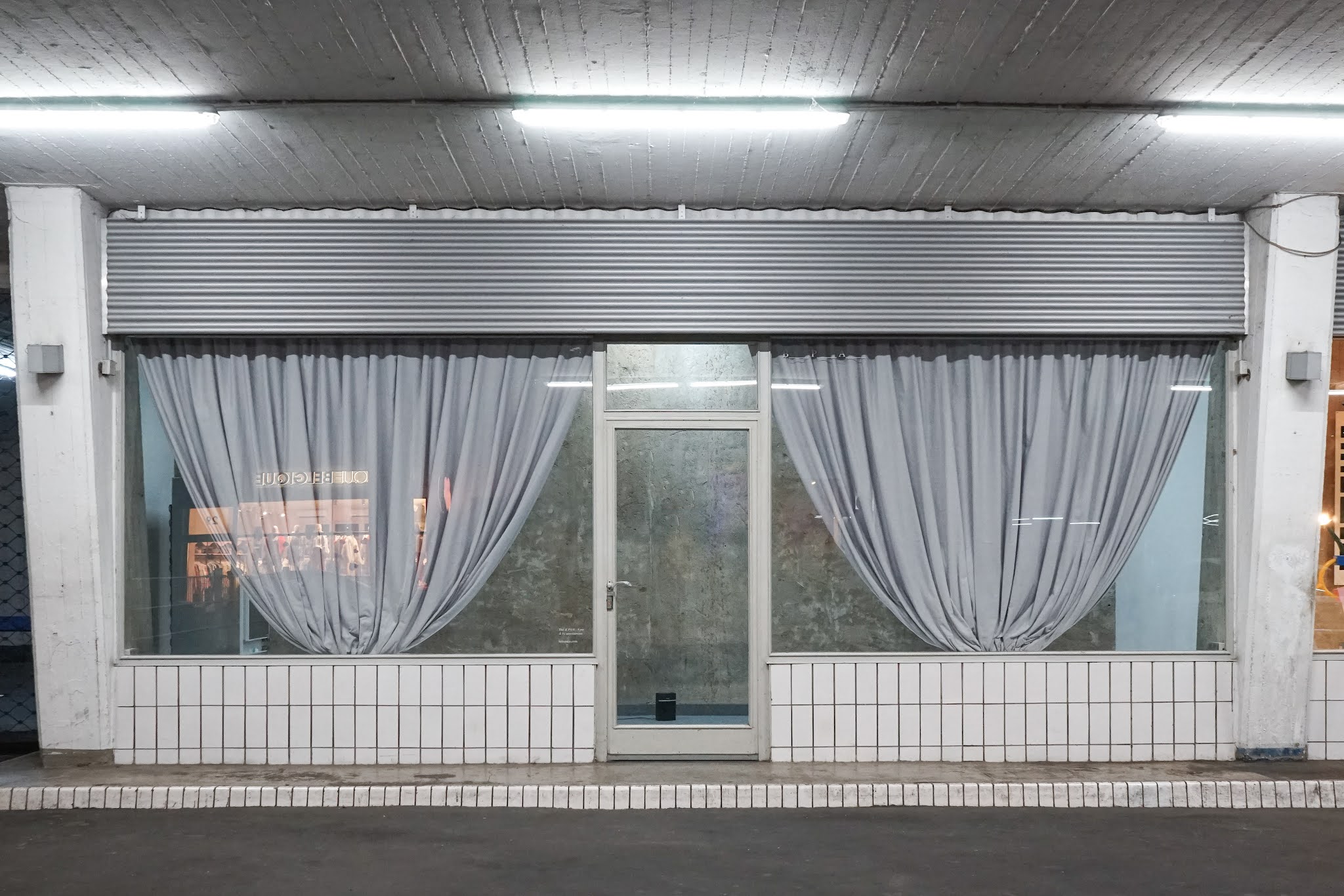 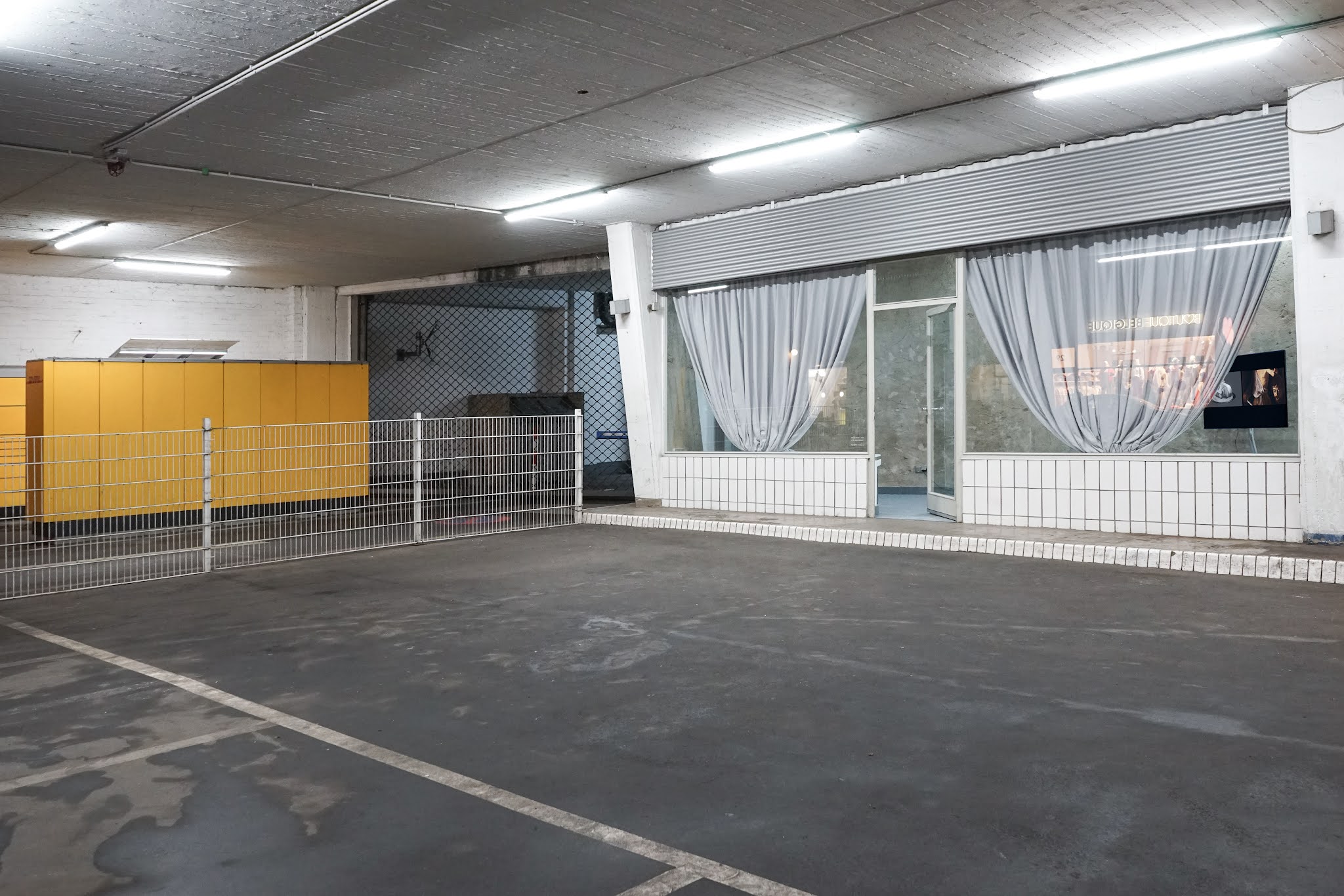 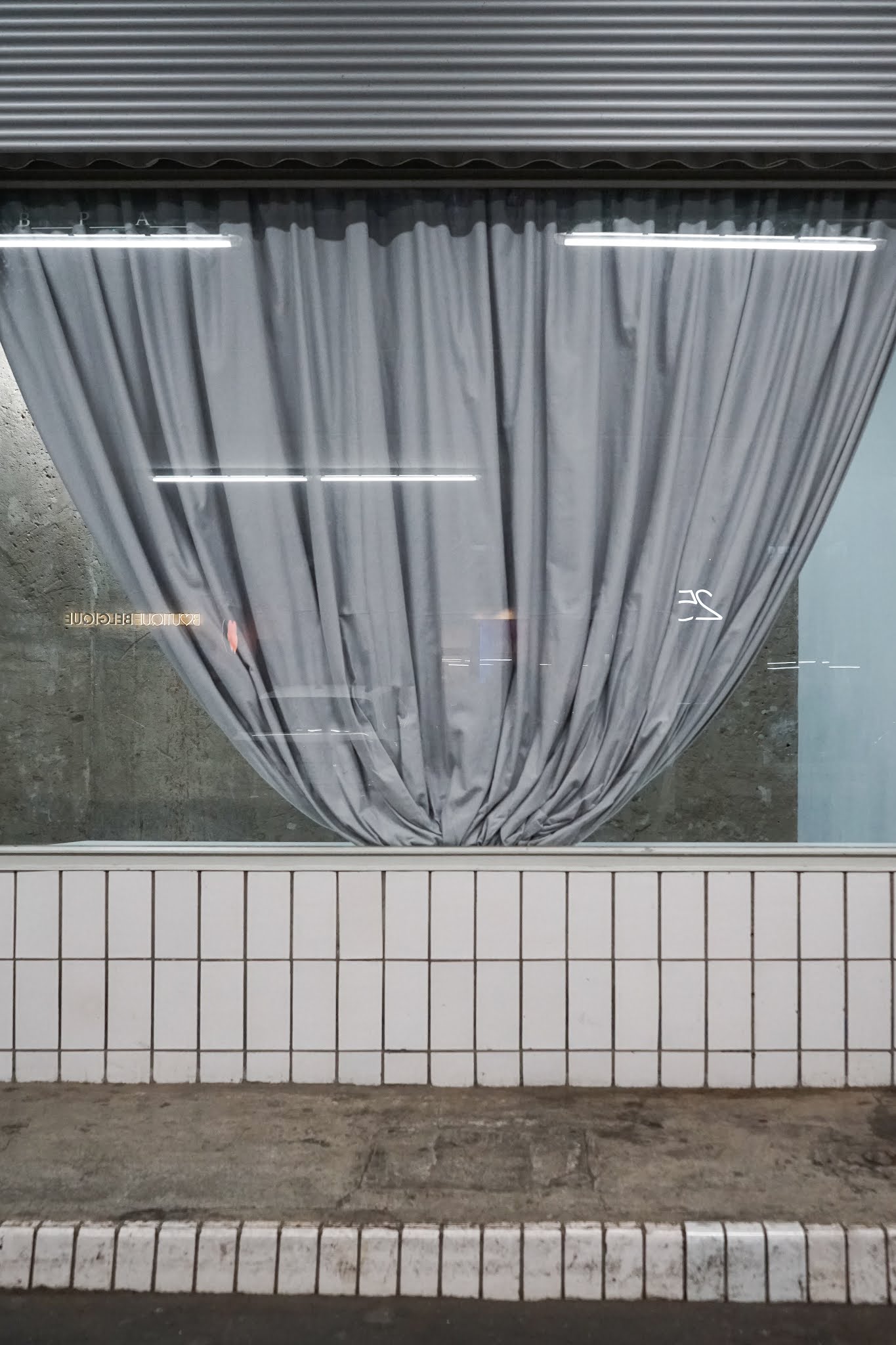 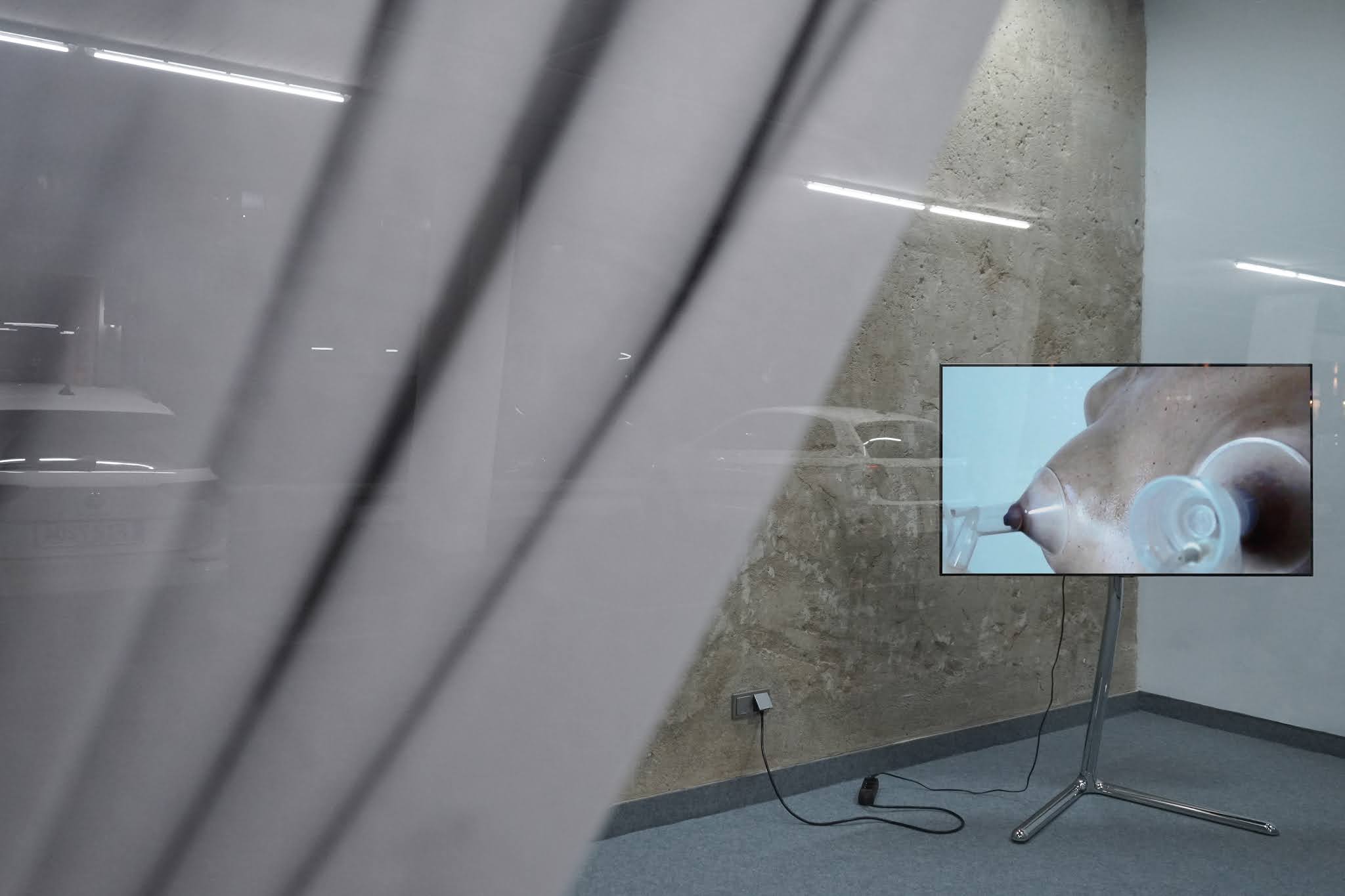 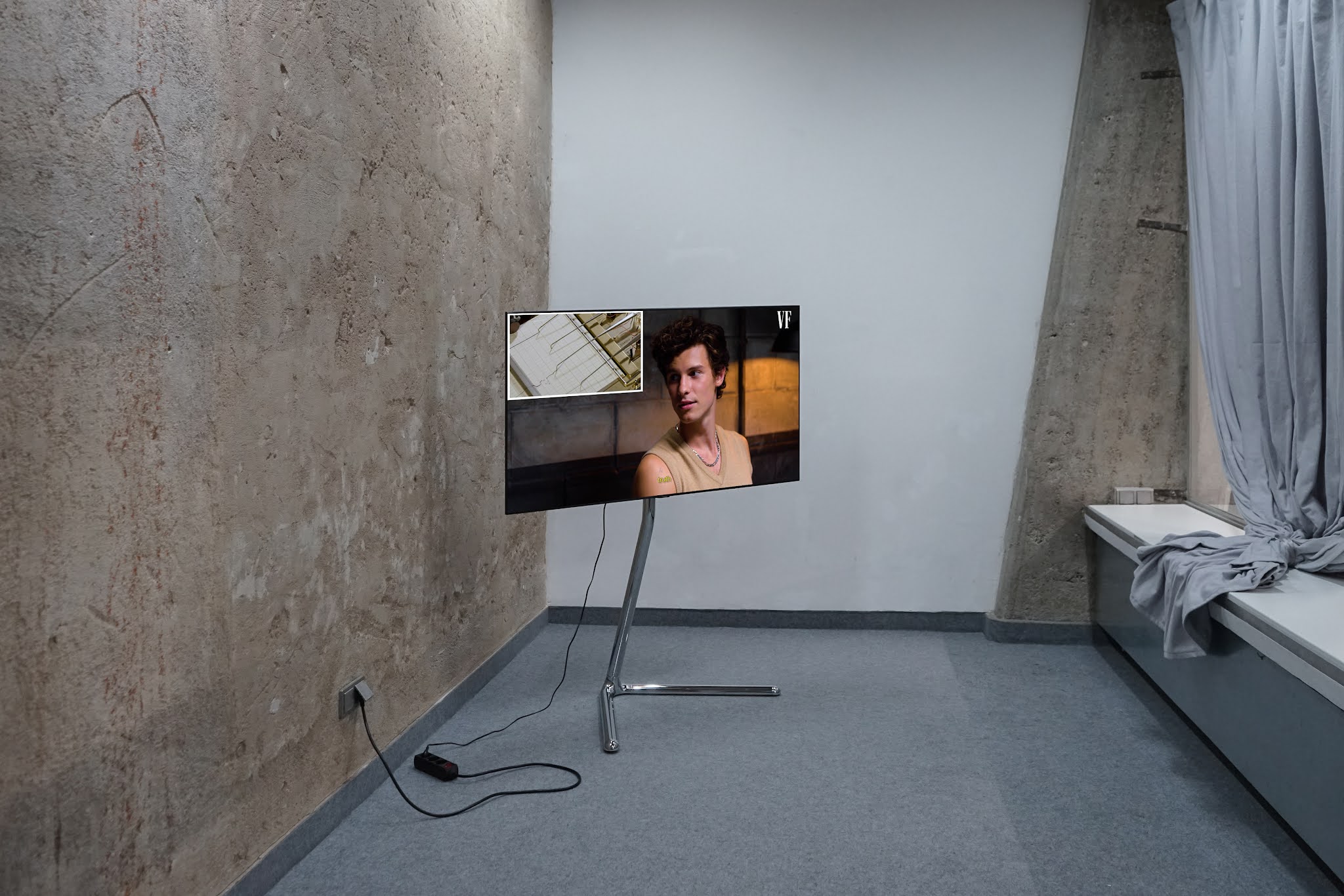 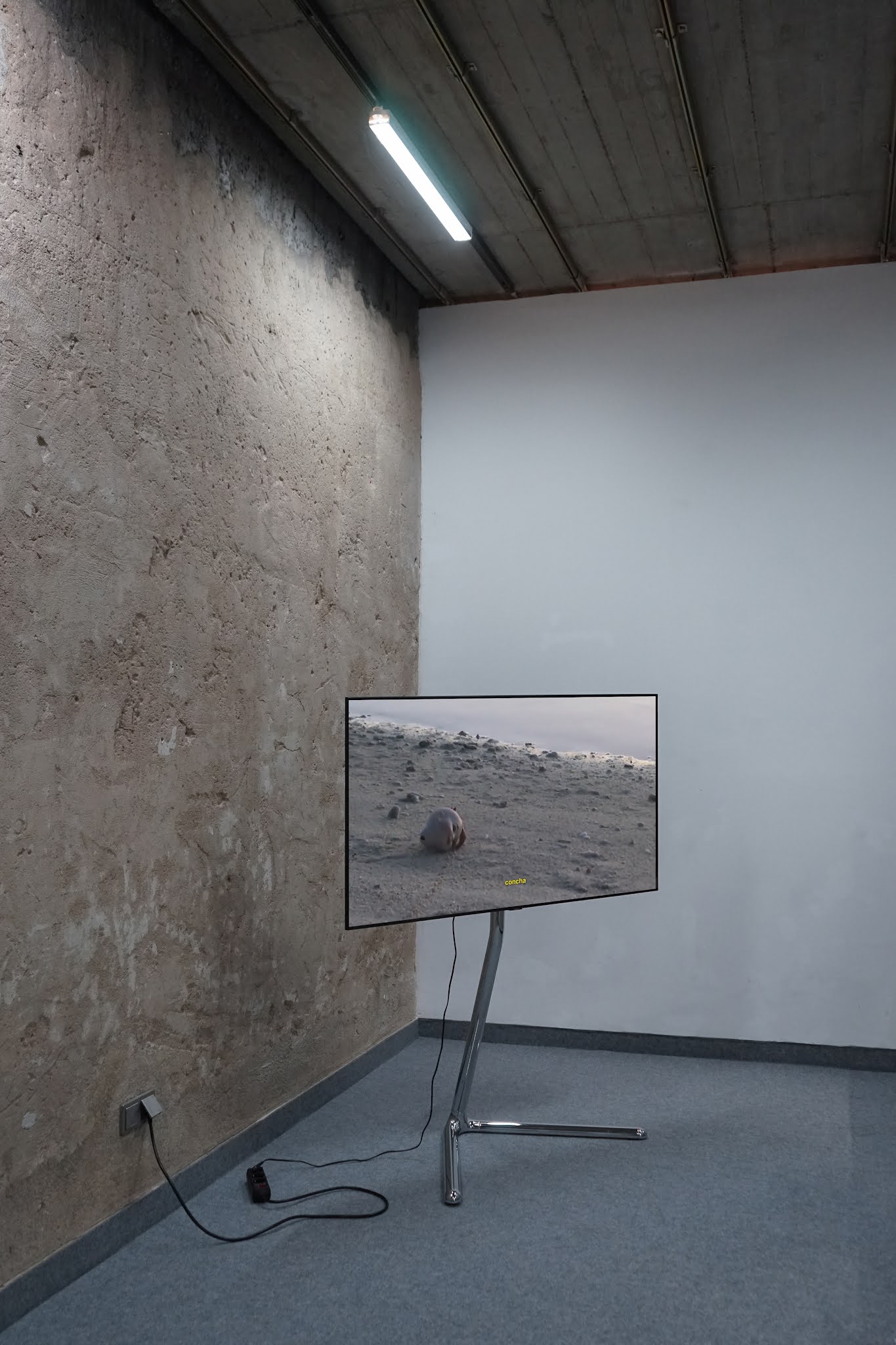 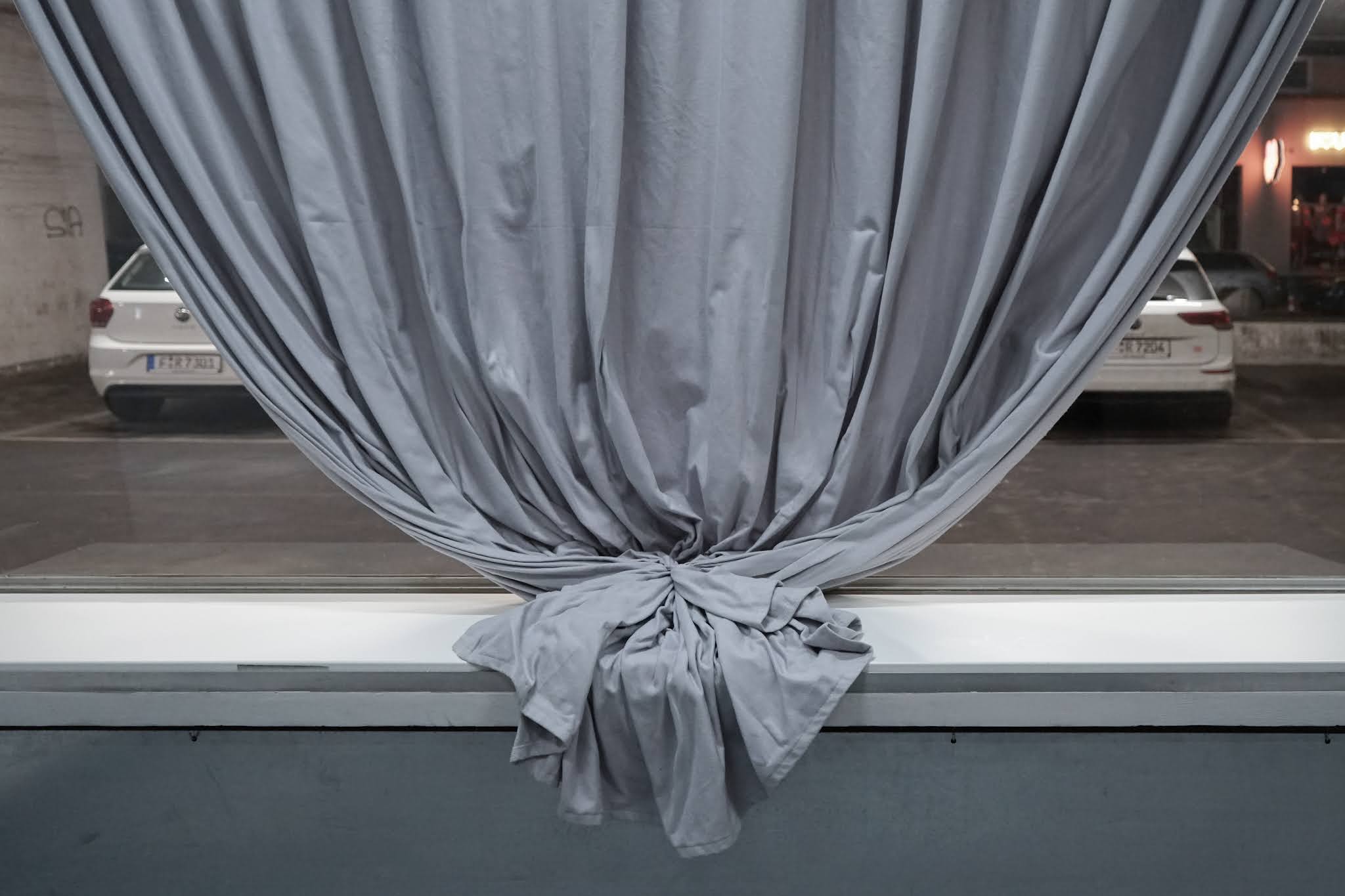 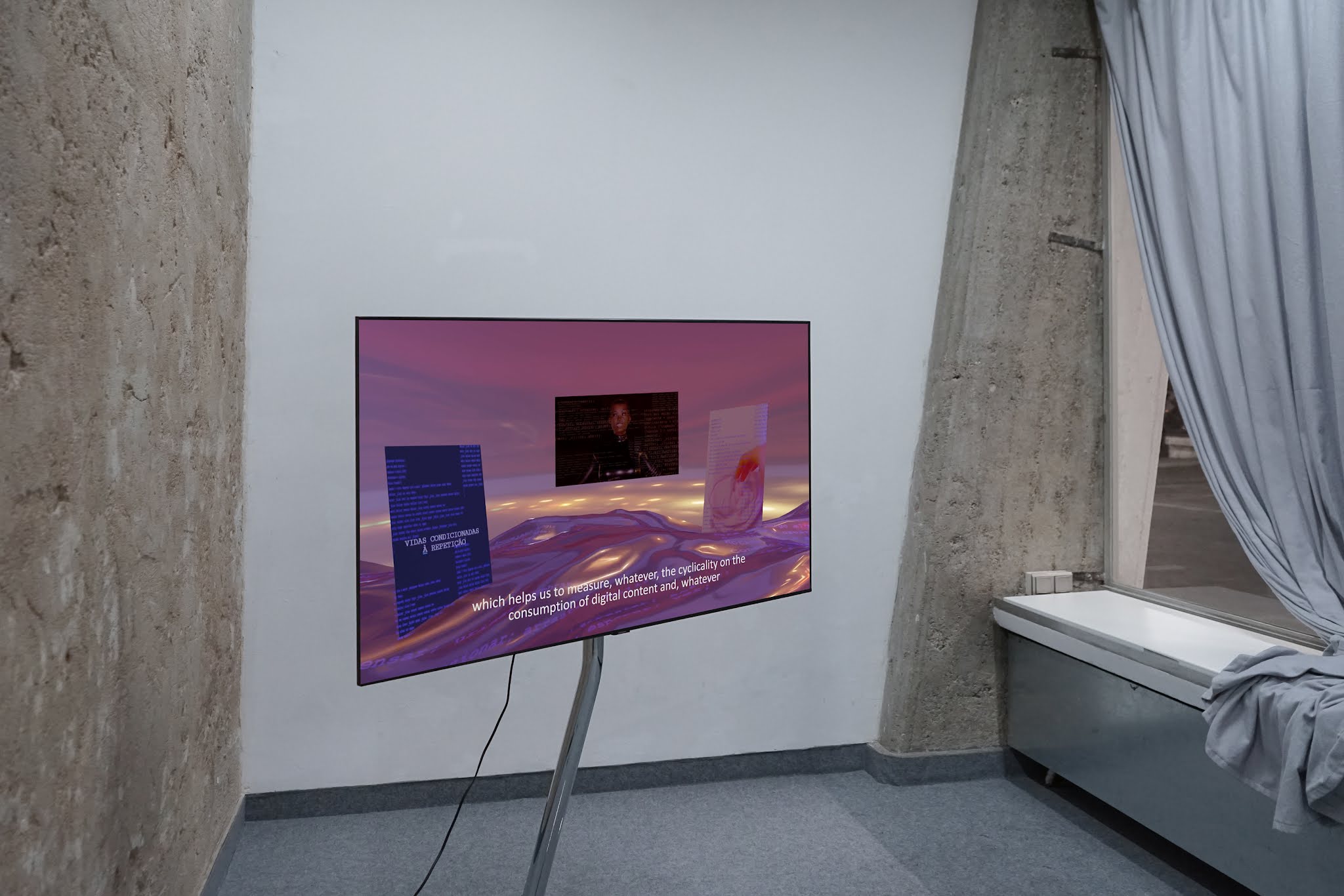 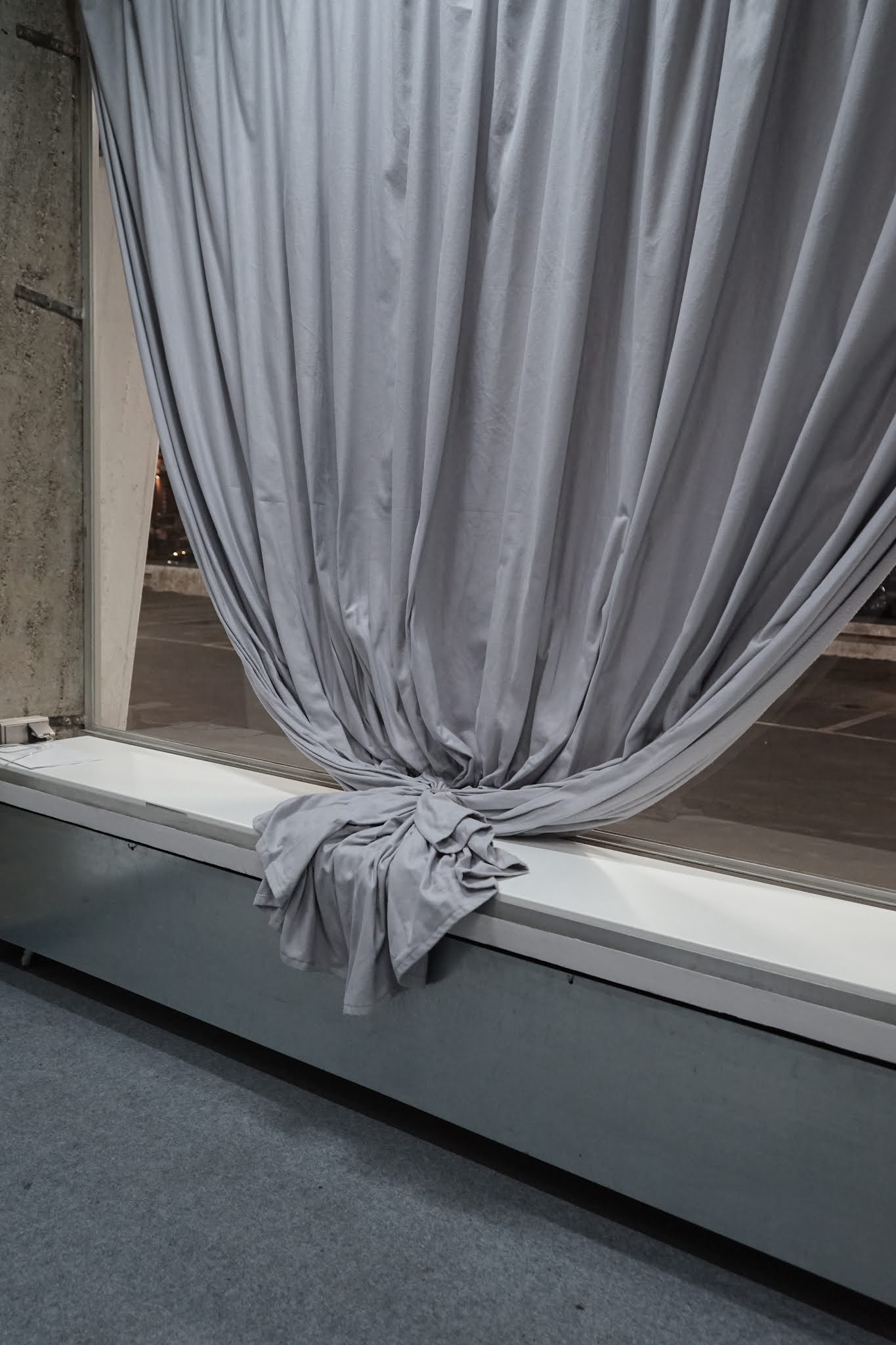 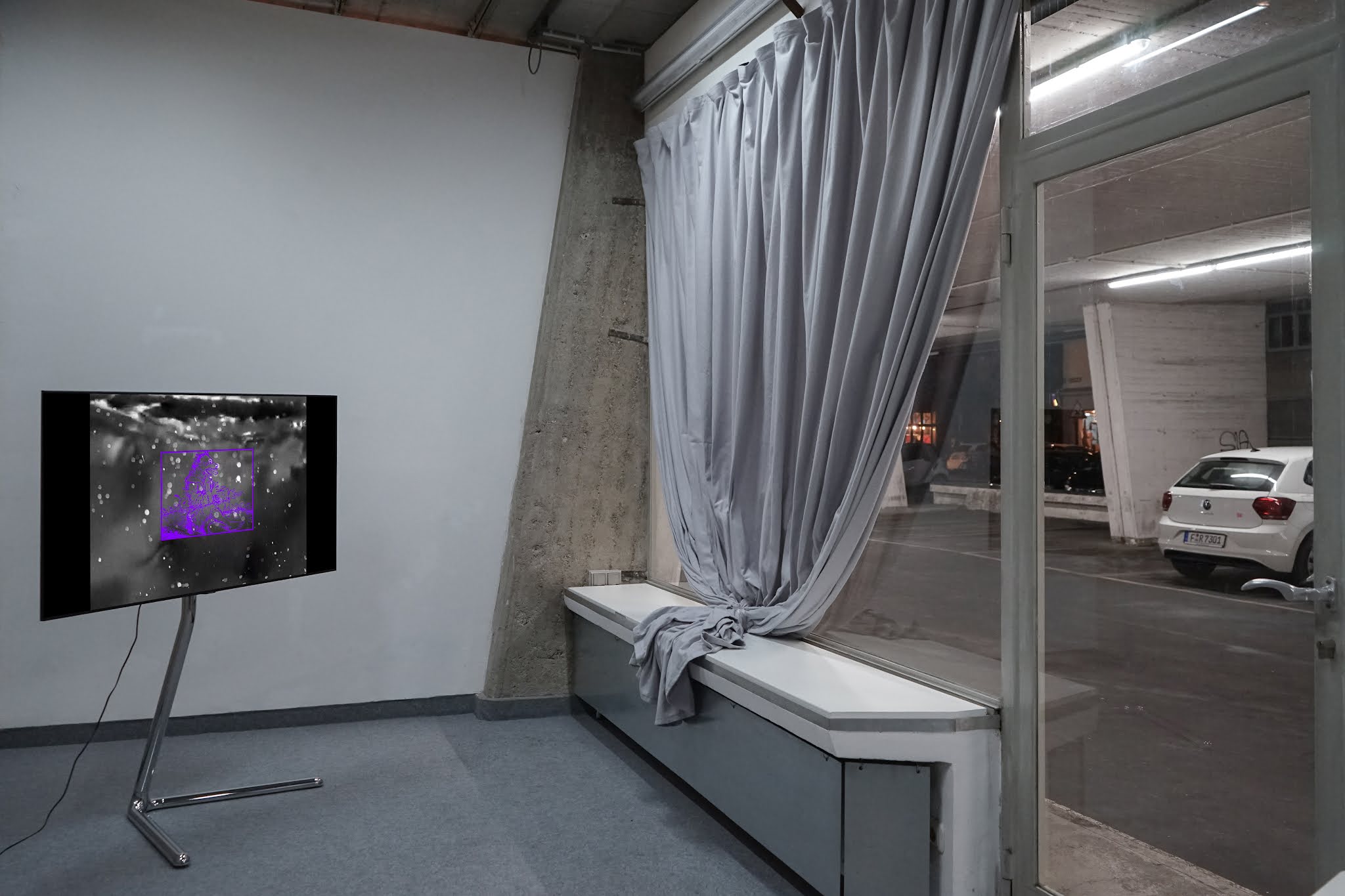 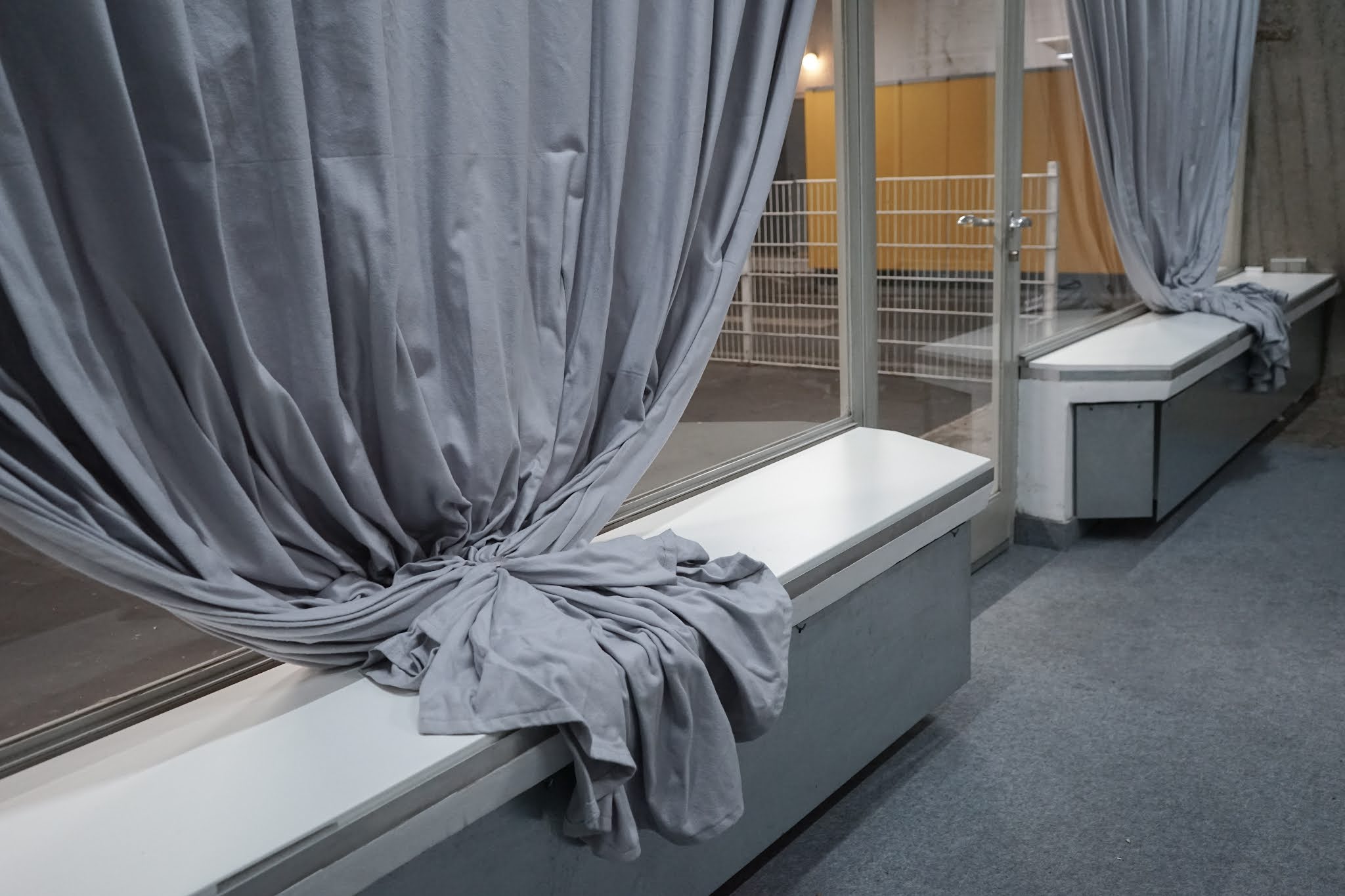 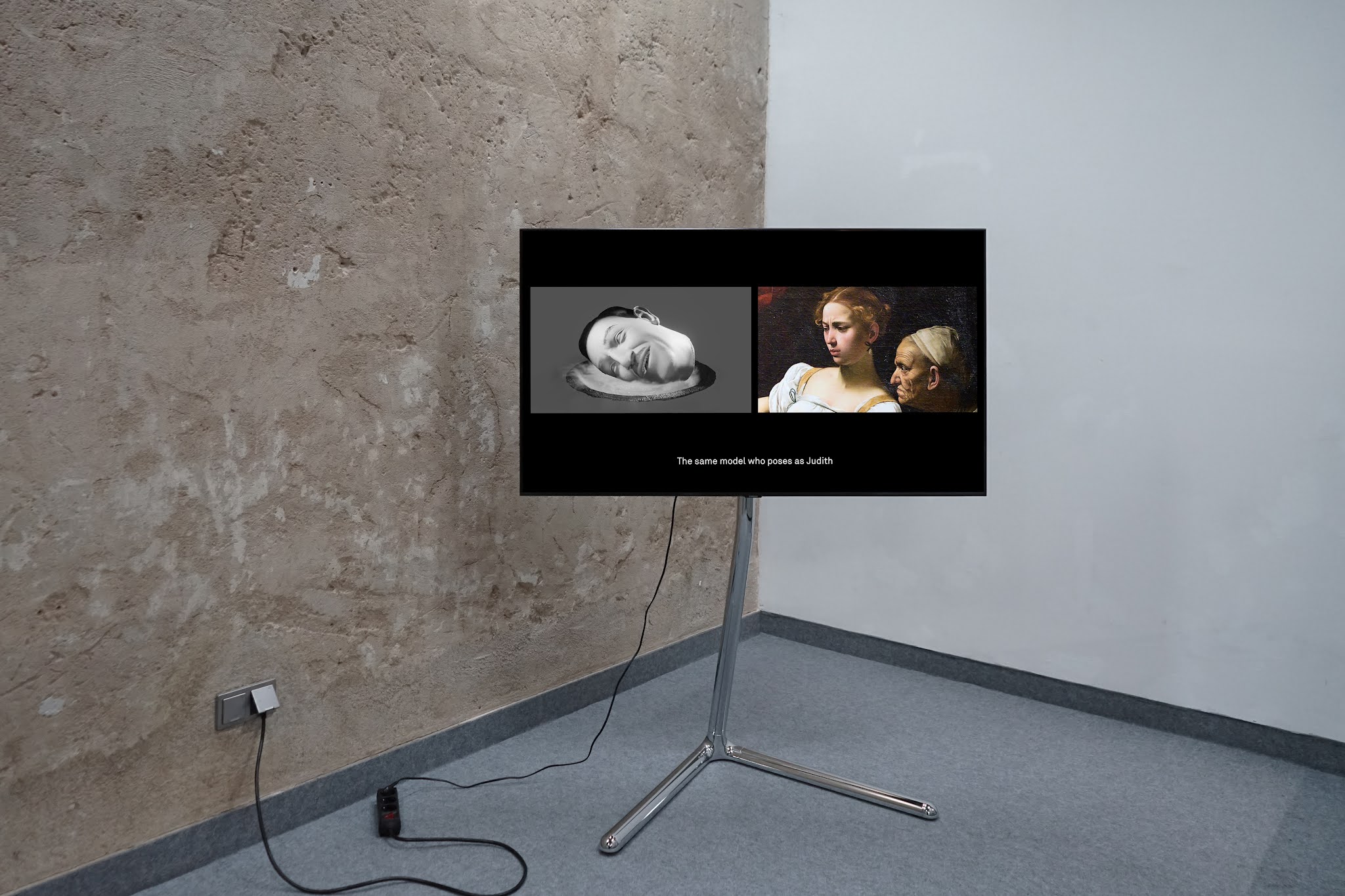 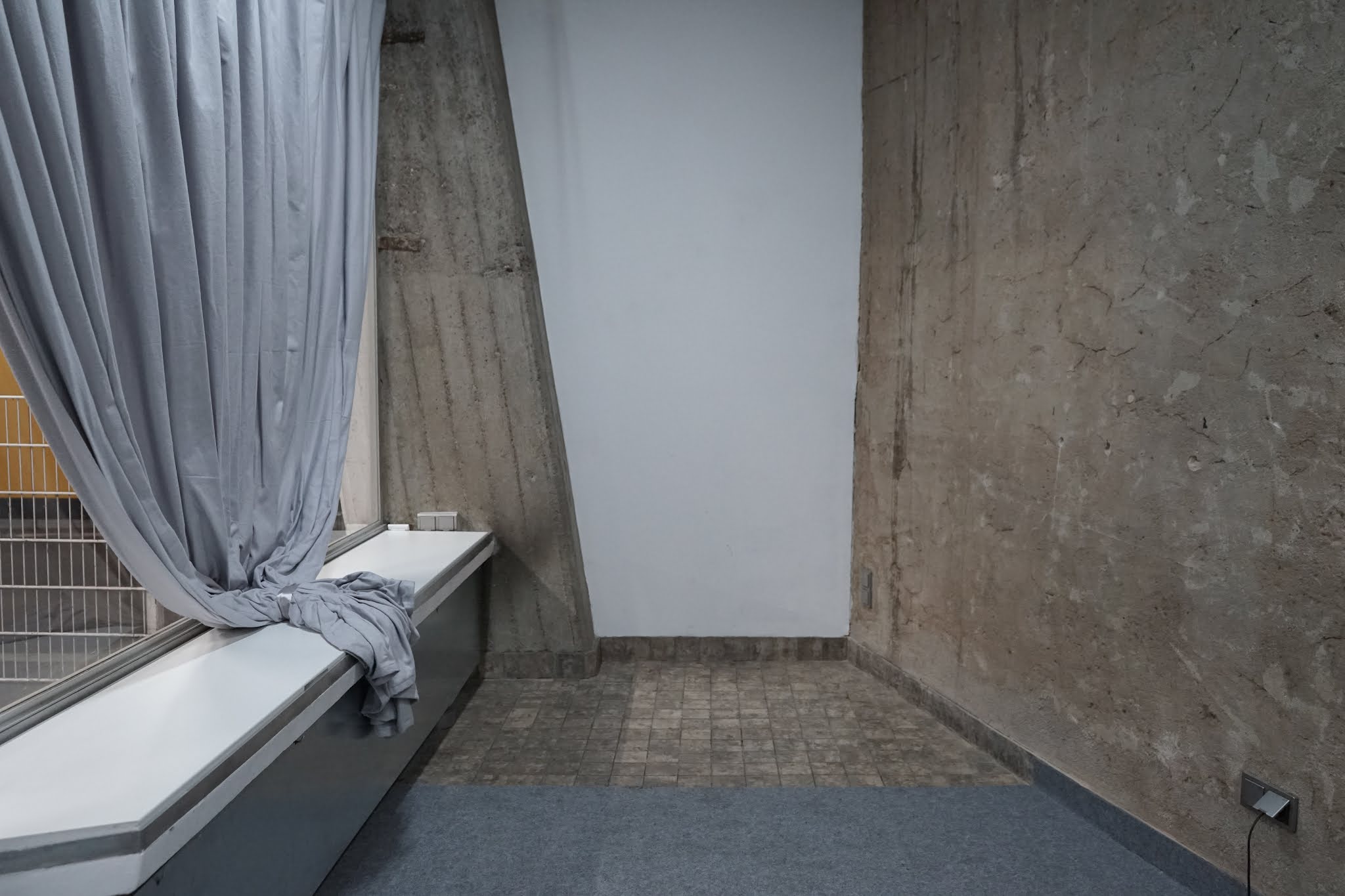 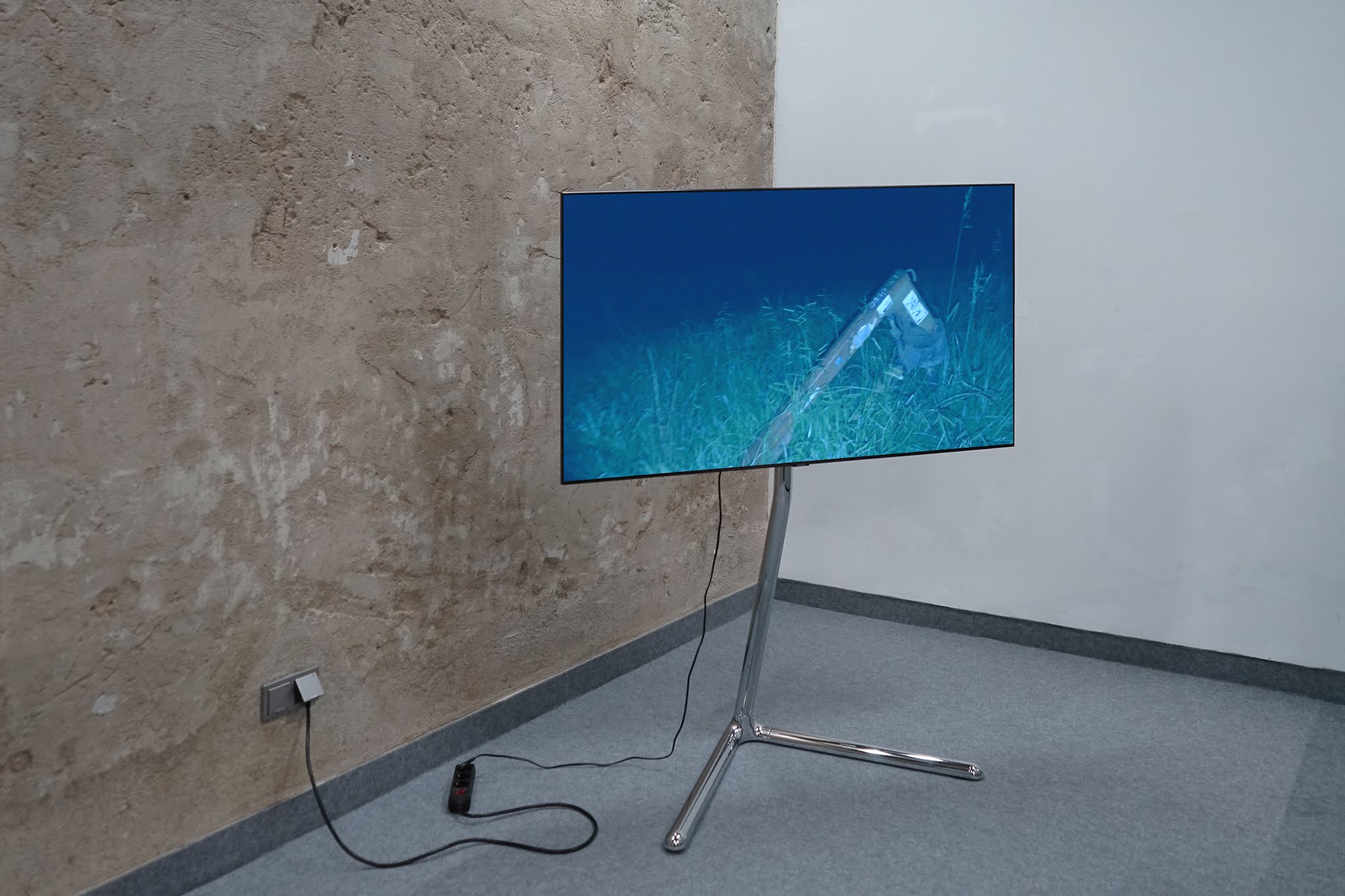 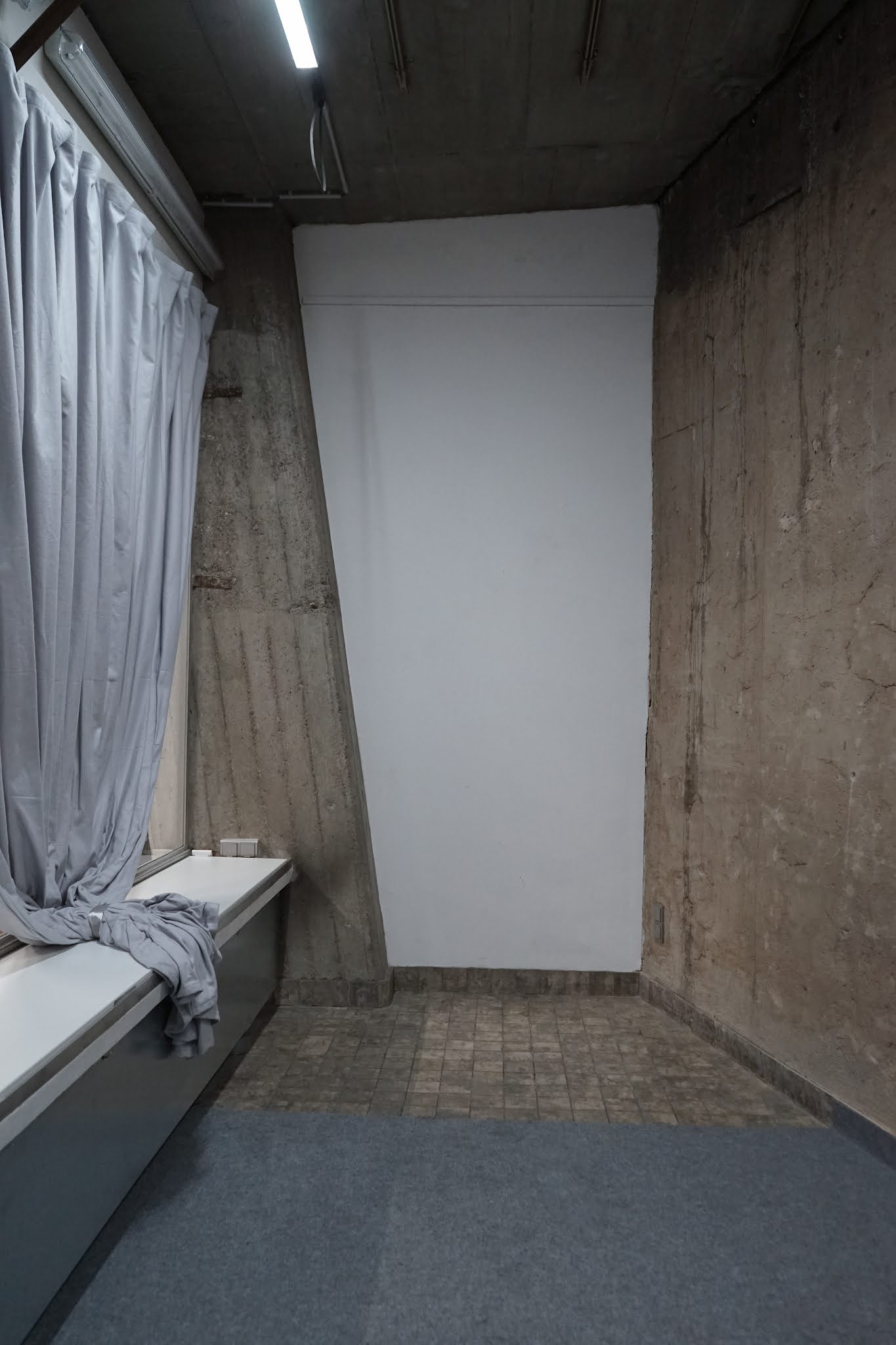 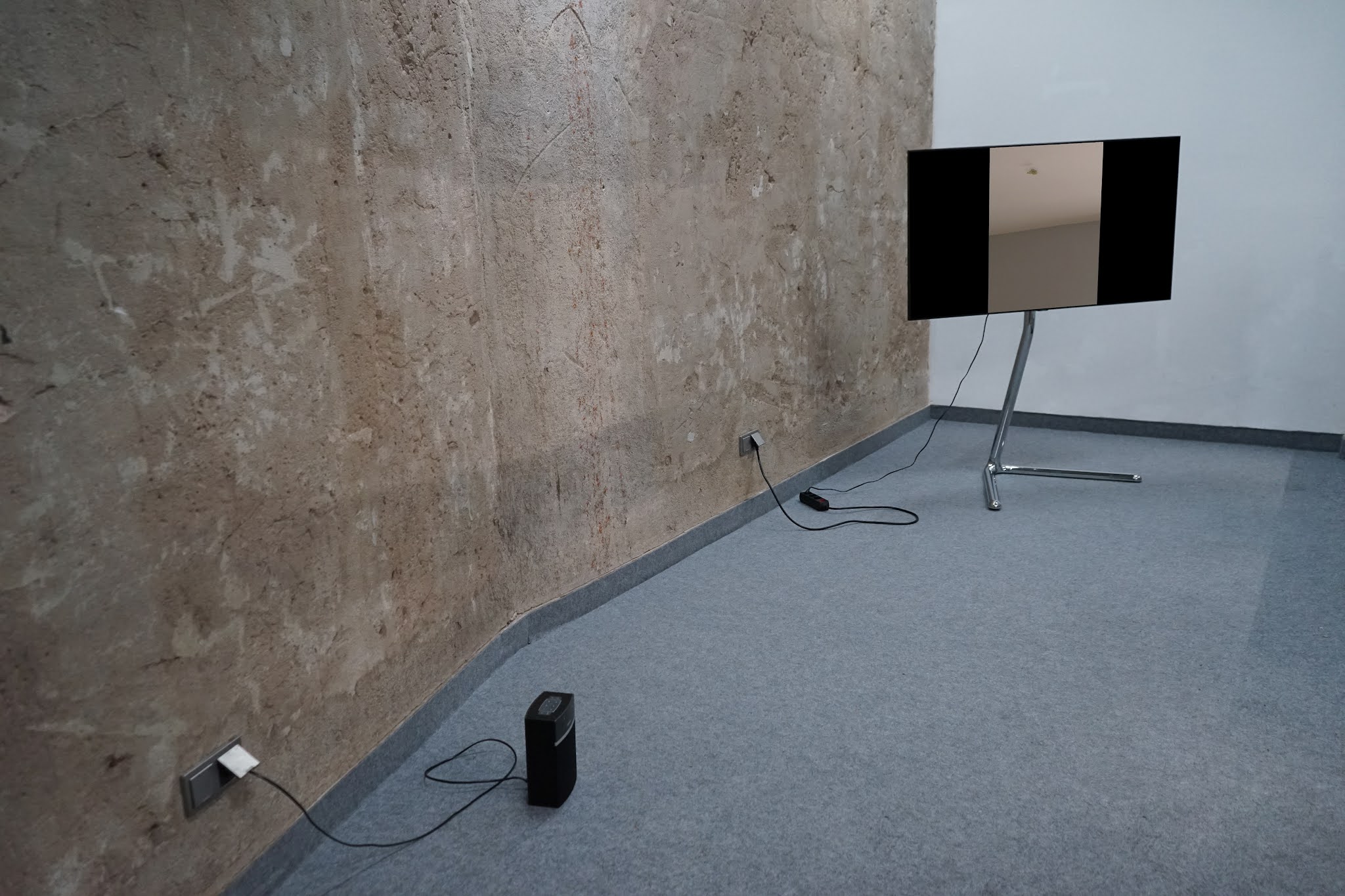 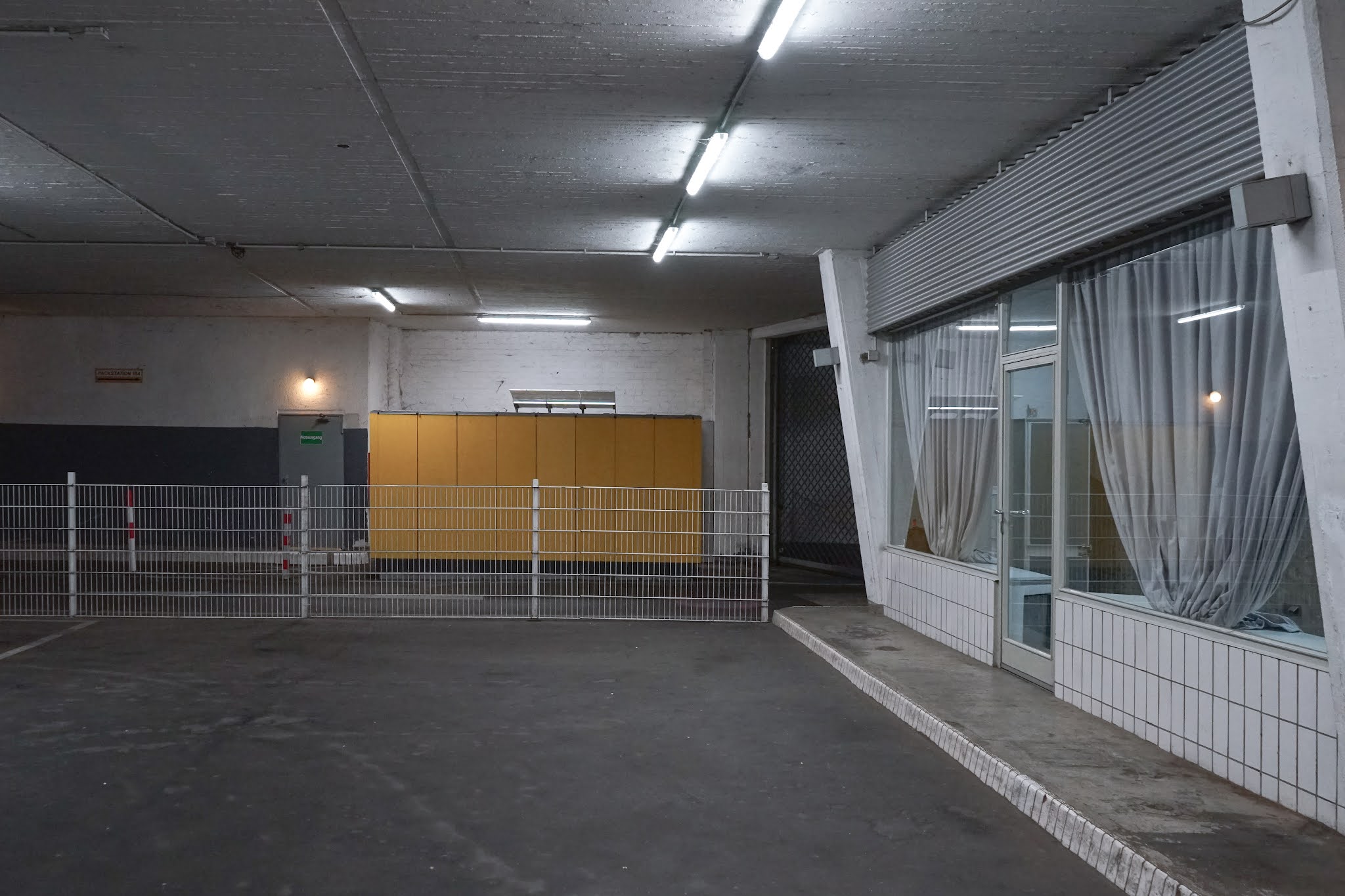 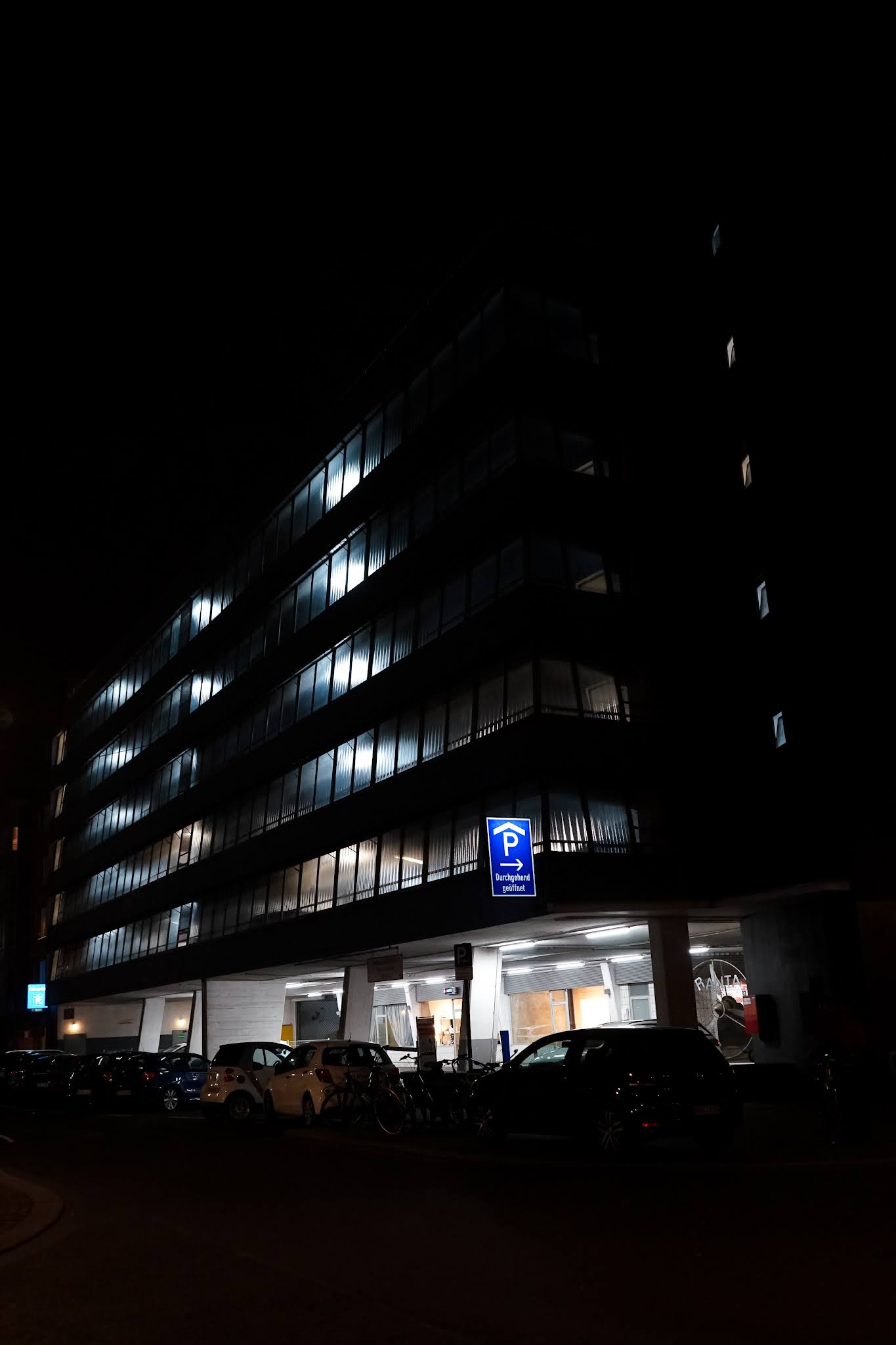 All images courtesy and copyright of the artists and BPA Space, Cologne.

Invited to write a text in response to the project first installed in São Paulo, Lívia Benedetti and Marcela Vieira highlighted a relationship between the works presented at the exhibition and the universe of the artist Kanye West. The parallel built by the writers possibly resides in the fact that the work of the artists in SUPER-NATURAL exist at the intersection between fascination and criticism – something that Mark Fisher once qualified as a juxtaposition of celestial longing and hypernaturalist kynicism when analyzing Spaceship, a song that Fisher pointed out as the heart of the rapper’s first album. Although Benedetti and Viera were commenting on the sculptural practice of the artists, the same link can be observed in the video works now presented at BPA, Cologne, and previously at MASSIMO, Milan.

Milking (2020), by Nídia Aranha, documents the extraction and monitoring of the breast milk flow from the artist's body, that of a synthetic woman, in her own words. This process is part of a biohacking investigation conducted on the possibilities of induced lactation in transvestite bodies through specific hormonal diet and mechanical extraction stimuli. The research reveals an almost fictional reality that resides in the limiting hegemonic inconsistency about the corporeality of the species.

BAG 2 (2021), by Wisrah Villefort proposes a parallel between the plastic industry and petrocapitalism with a video essay format by overlaying appropriated media material. The fact that marine crustaceans have been using plastic waste as shells and the evolution of the Anglo-Dutch oil multinational Shell logo is the narrative's starting point.

Caput (2021), by Ilê Sartuzi, weaves an associative tissue of links and references between the image of Walt Disney's head and the decapitated heads portrayed by Caravaggio. This two-channel video essay establishes two distinct narratives, in parallel, having the relationship with death and the visual proximity of iconography of the decapitated head as the core of this approximation. The work maps a trajectory of ideas in overlapping layers speculating, ultimately, about cryogenics, virtualization, and death.

The repetition of images guides the reflection on the states of ecstasy in @ilusão (2020), by artist Vitória Cribb, - the same of the anxiety, stress, tiredness, and loneliness that continuously affect us when interacting with the other and with the algorithm, which determines our hierarchical position in the digital environment through the curves of engagement. In the face of current events, the Vitória Cribb confronts two extremes of repetition in our society, drawing a parallel between violence and its investigation of the content loopings to which we are exposed daily amid early virtual socialization and algorithmic racism.

Rurais (2017), by Adriano Amaral, features night shots of the artist’s grandparents’ farm. Filmed with a drone, the footage of storage sheds, empty spaces, and abandoned farming utensils conjures a post-apocalyptical scenario reminiscent of the pictures taken by robots during the Fukushima nuclear disaster. Known as ASMR(Autonomous Sensory Meridian Response), the accompanying audio is designed to elicit physical sensations in the listener’s body, not unlike a sound-tact kinesthesia phenomenon. This phantasmal dimension that Rurais conveys is further compounded by the pieces attached to the walls that surround the TV sets: a number of wasp nests and an ambiguous set of sculptures. Each insect structure gives off different artificially-designed noises that add to the sound that accompanies the footage. Altogether, they provide ambiance, adding to the tension and quirkiness of these organic bodies.

Licantropia (2019), by Janaina Wagner, is an atonement of the figure of the werewolf, a creature shaped by men-kind as a scapegoat to give contour to cruel acts perpetrated by humanity through the course of history. Narrated by the moon during the course of a night and merging fiction and reality, the film is a collage of 16mm, digital, engravings, text, and anonymous testimonies. The werewolf, a hybrid being, always operates “in between”, transitioning around the limits of reality and invention, lie and truth, history and stories: it is an amalgam that merges in one single image the human and the animal, operating as an approachable bridge to investigate civilizing processes of domination through history.

Wisrah Villefort (Buritizeiro, 1989) lives and works in São Paulo, Brazil. In their practice, the artist incorporates sound, readymade, score, instruction, text, photography, and video in installations and hypermedia works that explore the relationship between nature and capital considering modernity and colonialism. Institutional collections and commissions include Kadist, France; and Instituto Moreira Salles, Brazil. In 2020, Villefort was an AIR in the Pivô Research residency program. Recent exhibitions include solo shows at Goswell Road, Paris, France;  GUAVA, Brasília, Brazil; and group shows at the 14th Curitiba Biennale; OLHÃO, São Paulo, Brazil; MASSIMO, Milan; and SALTS, Basel. Forthcoming projects include an exhibition at Centre d'Art Waza, Lubumbashi, and a residency at La Becque, Tour-de-Peilz, to which they received the Swiss Arts Council Pro Helvetia Residency Grant.

Ilê Sartuzi (1995, lives and Works in São Paulo) is an artist graduated from the University of São Paulo (USP). His research involves sculptural objects, mapped video projections, installations and theatrical plays addressing issues related to the idealized image of the body, often fragmented or constructed from different parts; but also the absence of this figure in proto-architectural and digital spaces. The interest in the dramatic arts in recent years has given a theatricality to objects and installations that are animated by mechanical movements and interpret dramaturgy and choreographies. Repetition is recurrent either as a constructive element of modular objects, a cyclic structure, or as a dramaturgical strategy. Participated in exhibitions at institutions such as Videobrasil (2021); Bienal SUR (2021); Homeostasis Lab (2021); Instituto Moreira Salles (2020); SESC (Ribeirão Preto, 2019; Distrito Federal, 2018); CCSP – Centro Cultural São Paulo (2018); MAC-USP Museu de Arte Contemporânea (2017); Museu de Arte de Ribeirão Preto (2020; 2017; 2015); Centro Universitário Maria Antônia (2019); Galeria Vermelho (2017; 2018, 2019); the three in collaboration with the research group After the End of Art, which he has been part of since 2015. He presented theatrical plays, performing mapped video projections in spaces such as Oficina Oswald de Andrade (2018, 2020); Itaú Cultural (2019); Container Theater (2019) and at TUSP (2019). Working for more than a year on a specific project, he premiered his play without actors “hollow head doll’s foam” at Firma (São Paulo, 2019). He received the PIPA Award in 2021.

Débora Delmar (1986, Mexico City) lives and works in London, where she completed the Postgraduate Programme at the Royal Academy of Arts. She previously attended the School of Visual Arts in NY. Delmar’s work investigates the effects of globalization on everyday life concerning consumer culture and society. She is particularly focused on the societal consequences, such as class issues, cultural hegemony, and gentrification. This is born from the omnipresent influence of the United States in Mexico and on the broader world. Her work examines the contextual value of goods, analyzing their production, distribution, consumption, and disposal. Delmar references corporate architecture, non-places, and multinational chains that utilize homogenized minimalist aesthetics within her installations. These are commonly composed of various media ranging from photographic prints or modified appropriated objects to commissioned hand-painted signs and carved sculptures. She often also incorporates immaterial components within exhibitions, such as sound, scent, and situations. The work of Débora Delmar has been presented in solo and group exhibitions, including the 9th Berlin Biennale (Berlin), Museo Universitario del Chopo (Mexico City), Modern Art Oxford (Oxford, UK), Museum of Modern Art (Warsaw), Museum of Contemporary Art Denver (Denver), Museo de Arte Contemporaneo de Oaxaca- MACO (Oaxaca), Bikini Wax (Mexico City).

Vitória Cribb (Rio de Janeiro, 1996) holds a BA in Industrial Design from ESDI, UERJ Superior School of Industrial Design. A daughter of a Haitian father and a Brazilian mother; the artist has been creating in recent years digital and visual narratives that permeate techniques such as the creation of 3D avatars, filters in augmented reality and immersive environments, using the digital environment as a means to explain their investigations and current issues traversed by their subconscious. The artist investigates the behaviors and developments of new visual/social technologies and transposes her thoughts through the immateriality present in the digital. In 2021 "@ilusão", the artist's film and digital installation, were mentioned and gained prominence in reviews such as the XR panel in The Art Newspaper. Among exhibitions are Futuração (Galeria Aymoré, Rio de Janeiro, 2021) stand out; Disembodied Behaviours (bitforms gallery, New York and Newart.city Platform, online, 2020), The Brazil I Want (Centre d'Art Contemporain Genève, online, 2020), AINDAMTNADA (online, 2020), Are you seeing me? Are you listening to me? (Casa Niemeyer, online, 2020), Beginning of the Century (Galeria Jaqueline Martins, São Paulo, 2019).

The work of Adriano Amaral (Ribeirão Preto, 1982) involves an examination of the nature of things in the world, the materiality and substance of what is around us, and its value and transforming power over time. His practice starts from an intuitive and plural approach and results in complex immersive installations that are always sensitive to the context in which they are inserted. After completing his MFA at the Royal College of Art London in 2014, Adriano did a two-year artist residency at De Ateliers in Amsterdam and received the Mondrian Fonds Work Contribution Proven Talent in 2017. His recent institutional exhibitions include solo projects at Kunstinstituut Melly (Rotterdam, Netherlands), Vleeshal Zusterstraat (Middelburg, Netherlands) and Bielefelder Kunstverein (Bielefeld, Germany). Group exhibitions include projects at Mudam (Luxembourg), Sixty Eight Art Institute (Copenhagen), Moscow Museum of Modern Art, and Beelden Aan Zee (The Hague, Netherlands).

Janaina Wagner (São Paulo, 1989) works with the relations of limit, control, and contention that human-kind establishes with the world. Searching for contact points between the human character and the constructions that humanity edifies, Wagner investigates the forms and ways that his efforts represent issues that refer to their finitude in itself. Her work aims to present a critical and questioning imagery narrative around the structural, concrete, and subjective human fragility towards the universe that he inhabits. Holding BA both in Fine Arts and in Journalism, and a middle school video teacher, many of Wagner’s references derive from the procedures mankind registers and articulates its progress and legacy. Journalism’s sociological bias functions for her to approach the mechanisms that validate a story as a true one – a constellation of tales, facts, and images. Janaina develops her plastic work in a “decoupage” process, rearticulating images and texts already inserted in media circulation. Currently, she is a Ph.D. candidate at Le Fresnoy-Studio National des Arts Contemporains (FR). Janaina lives and works between Roubaix and São Paulo.