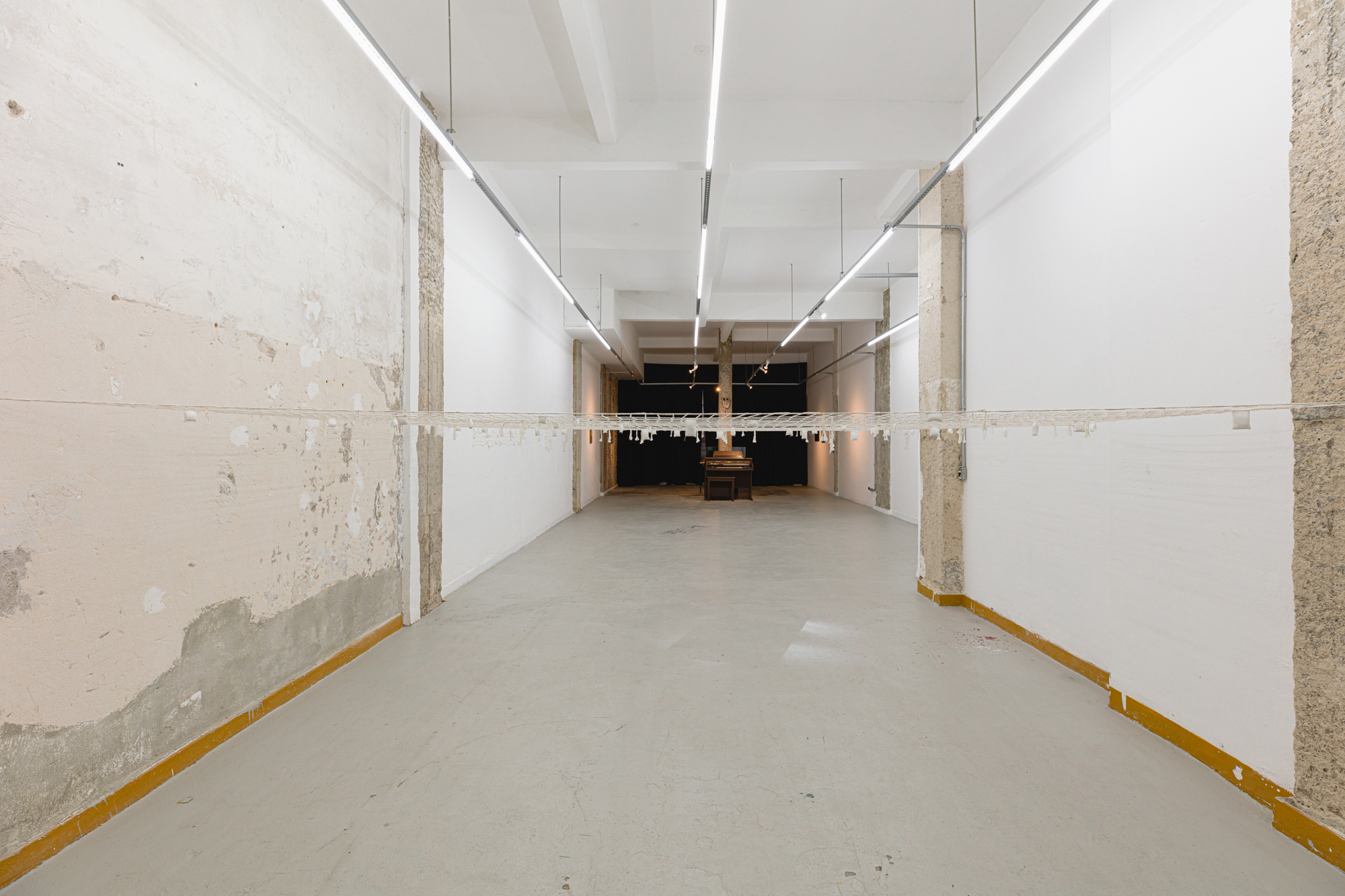 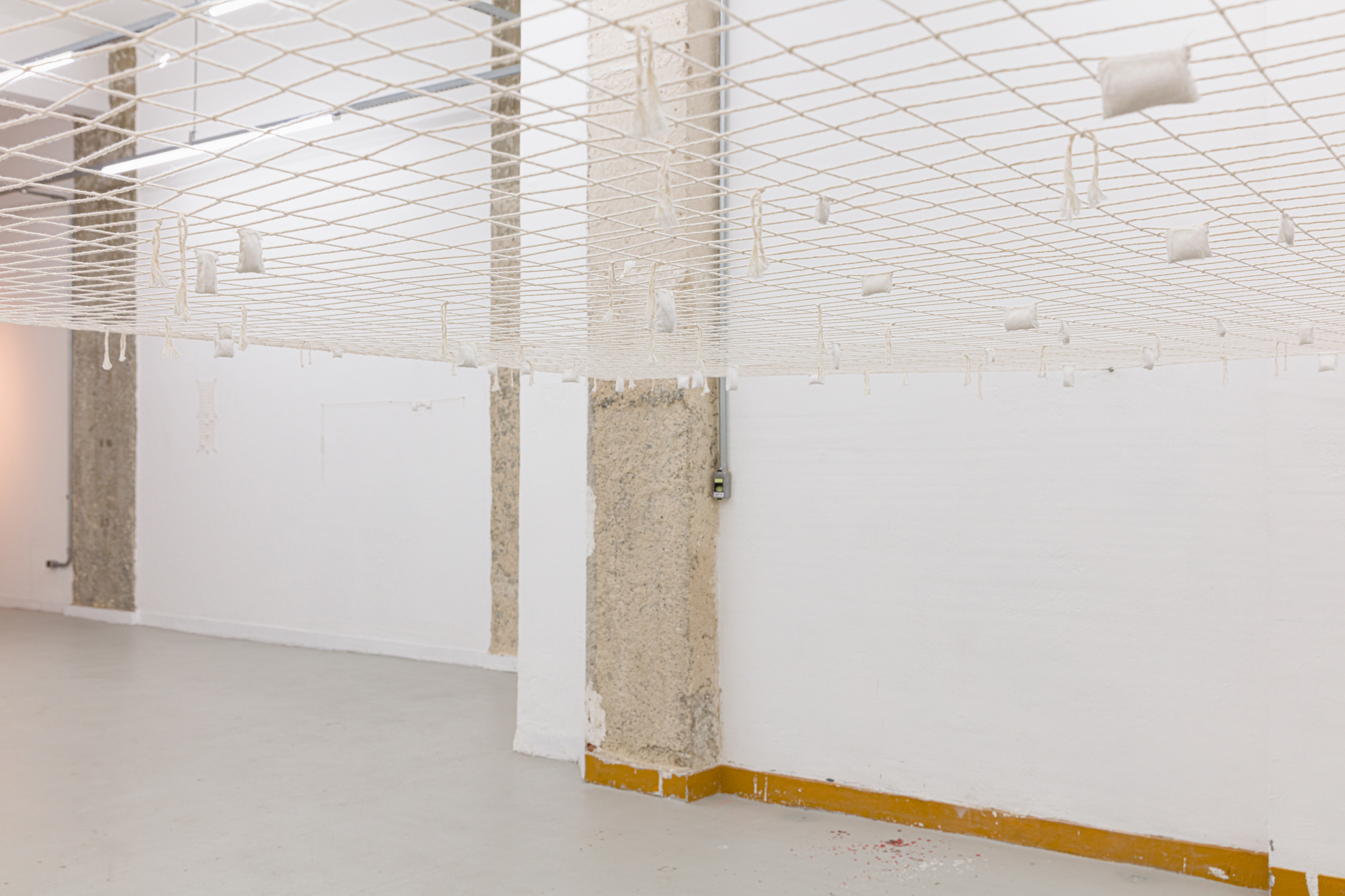 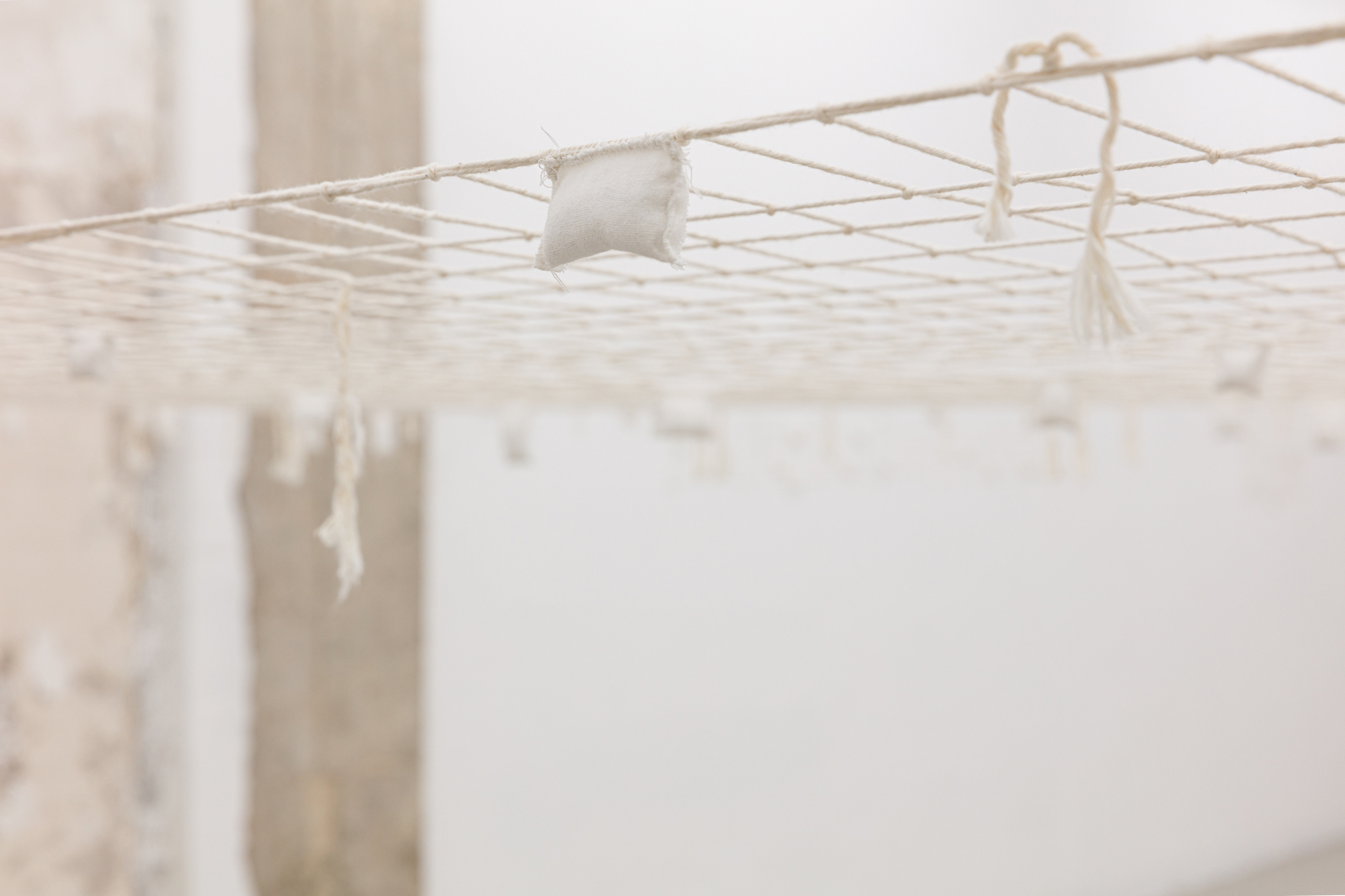 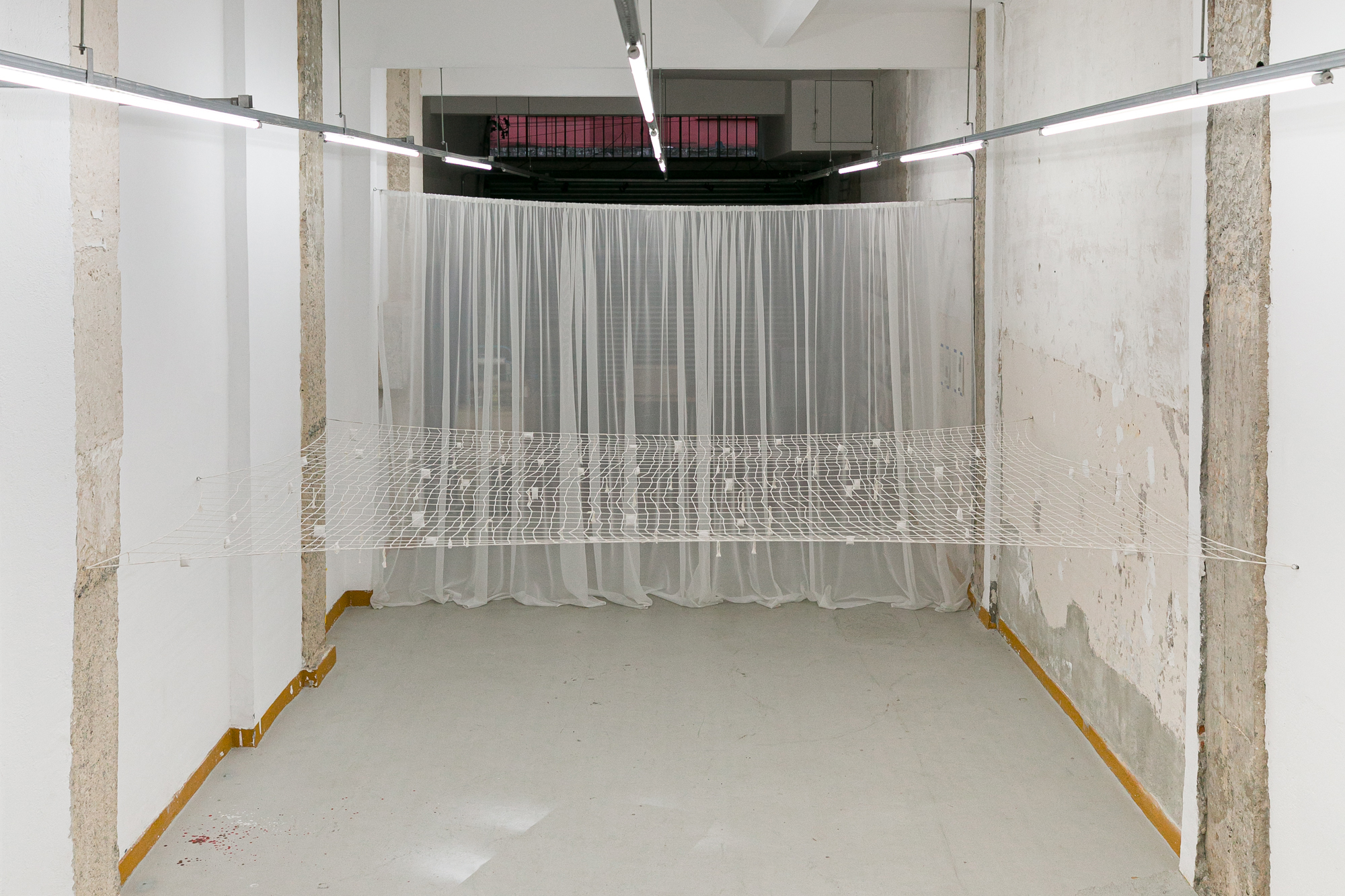 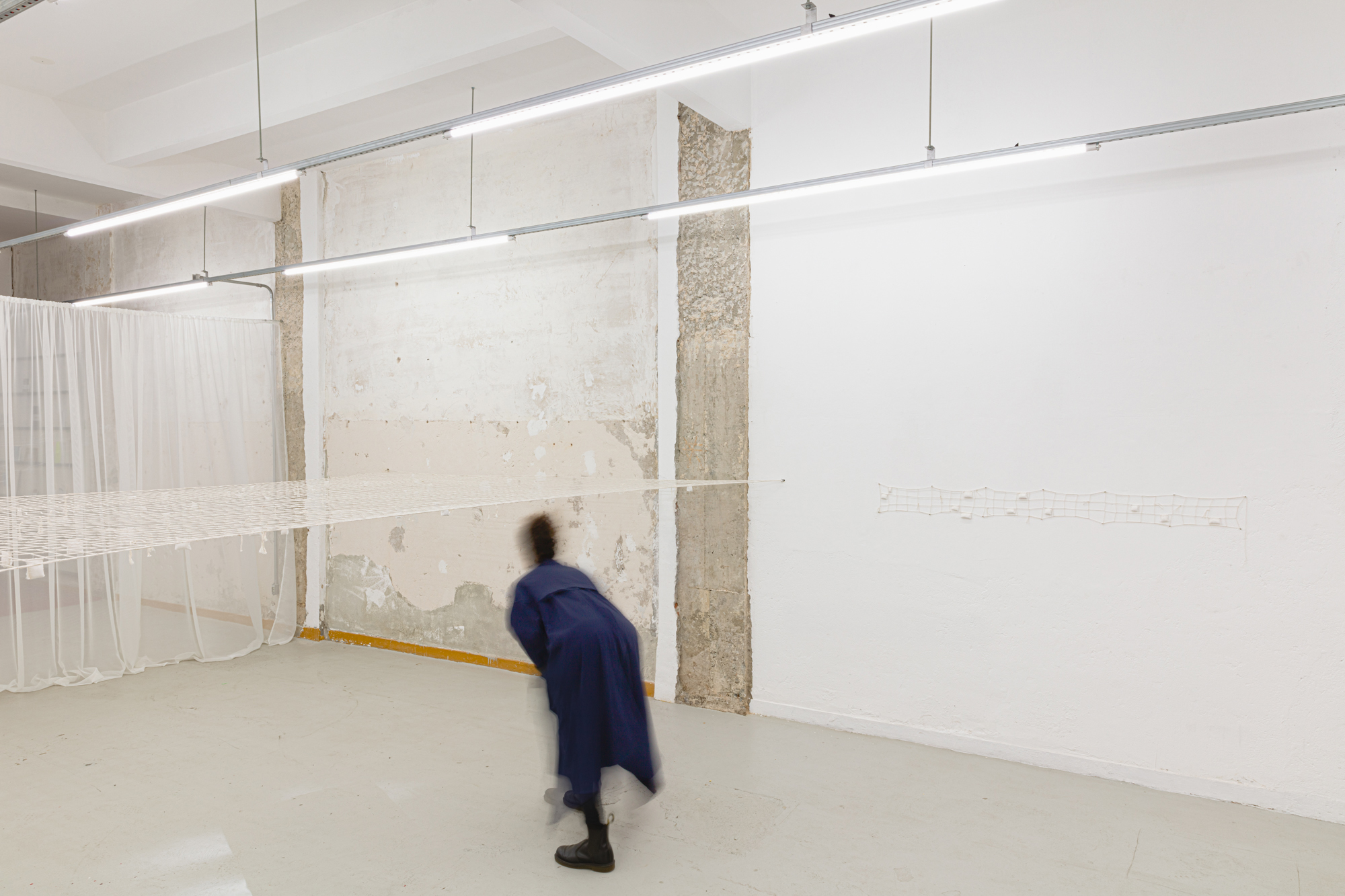 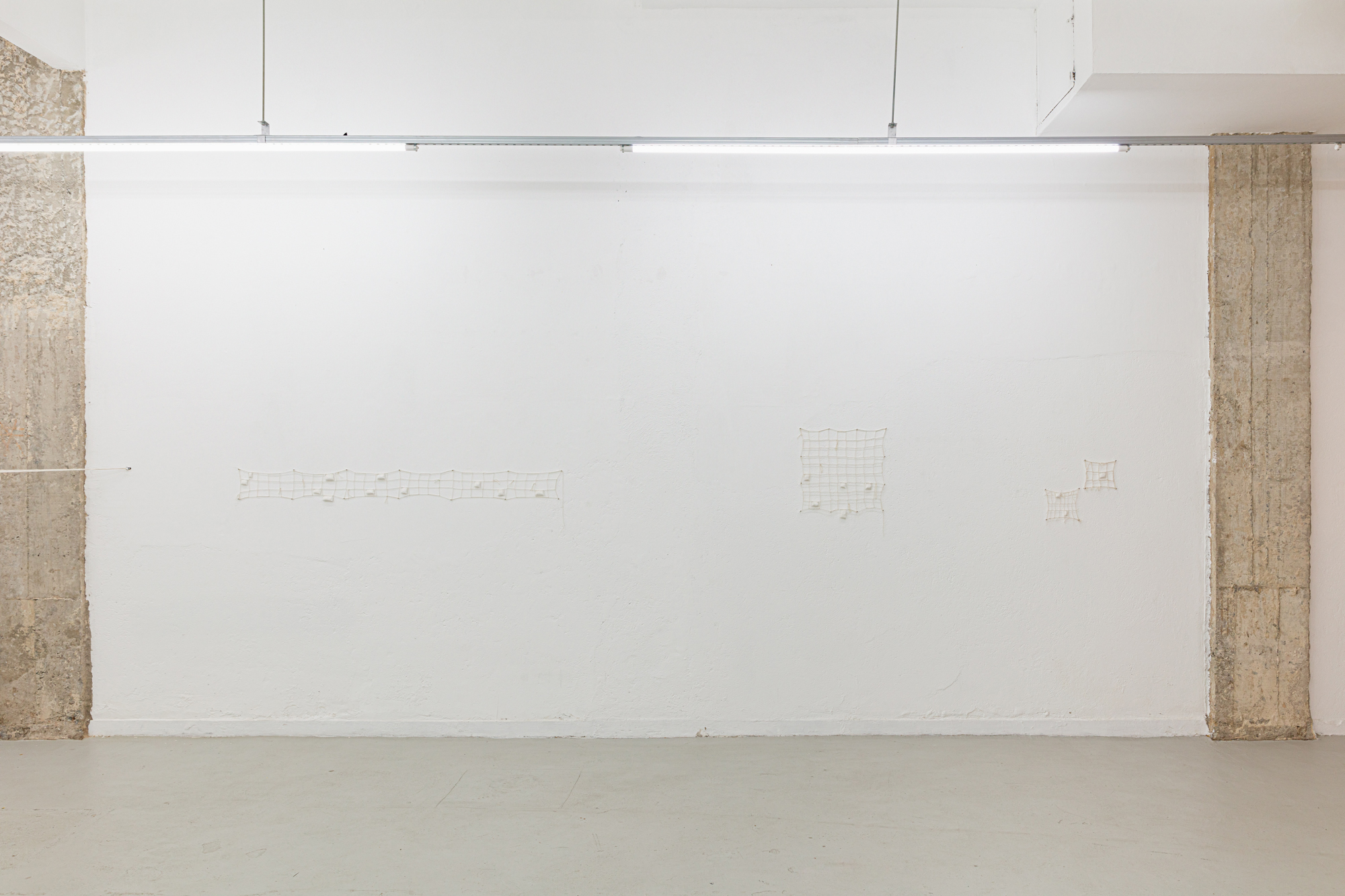 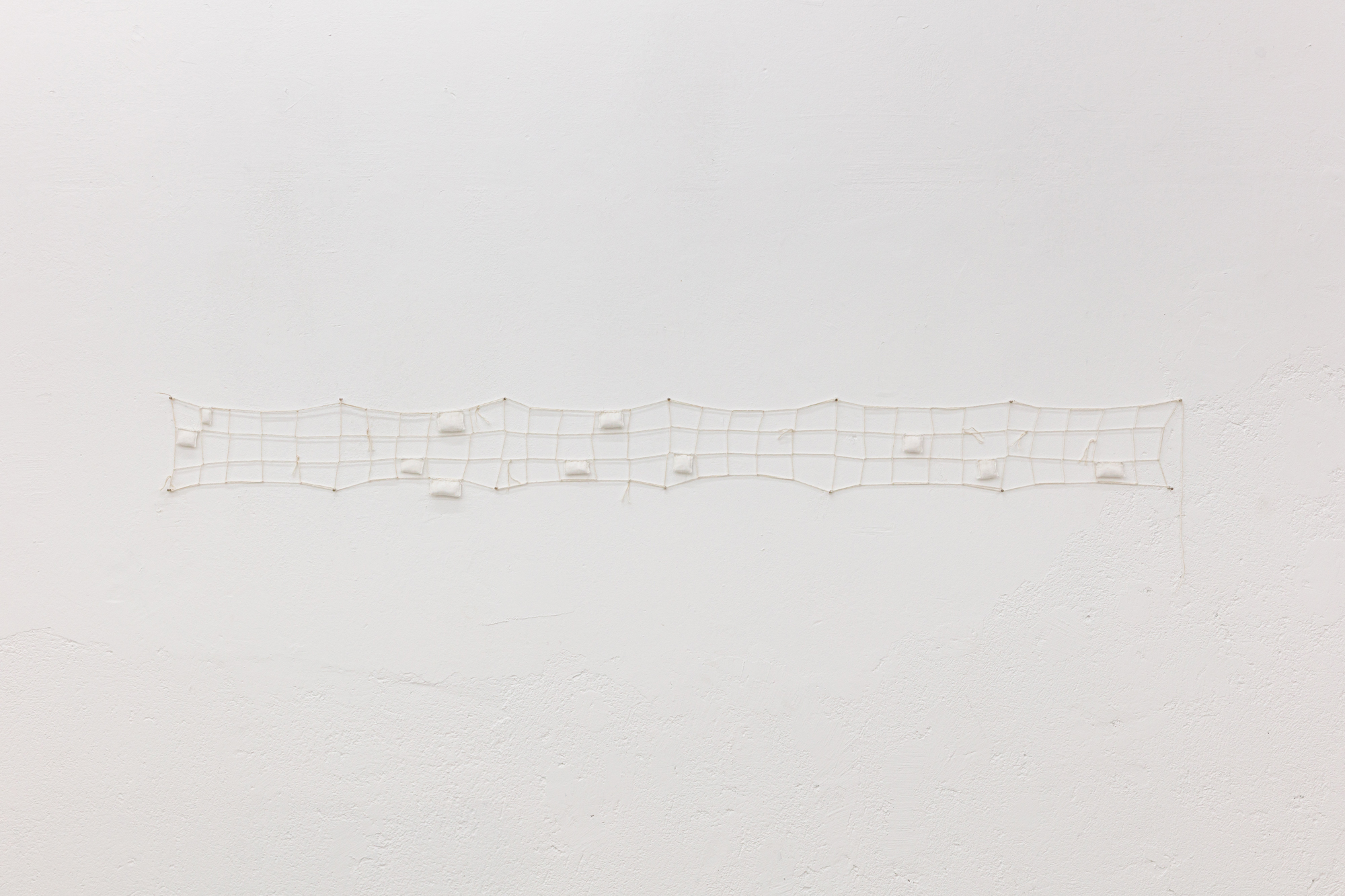 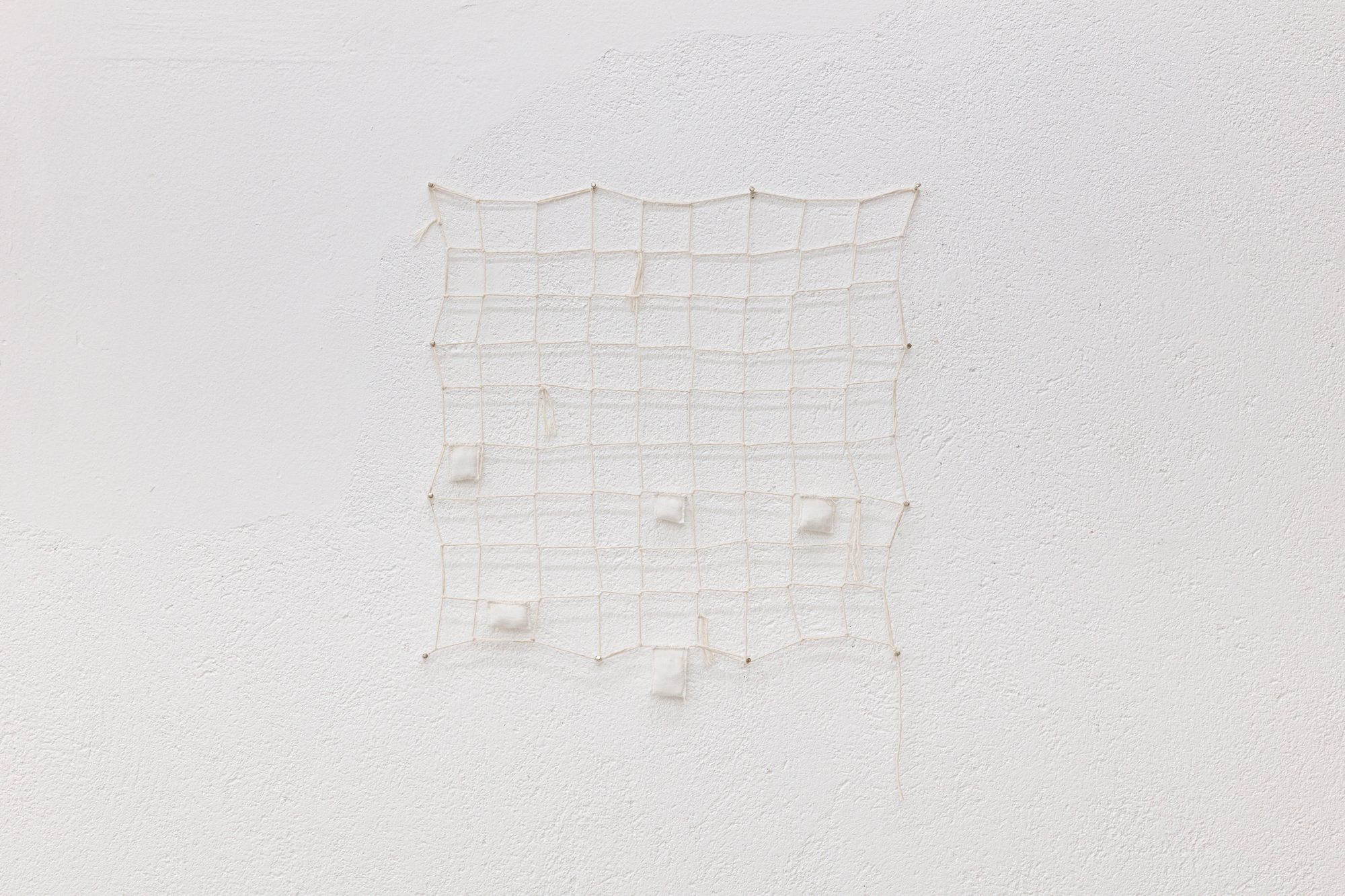 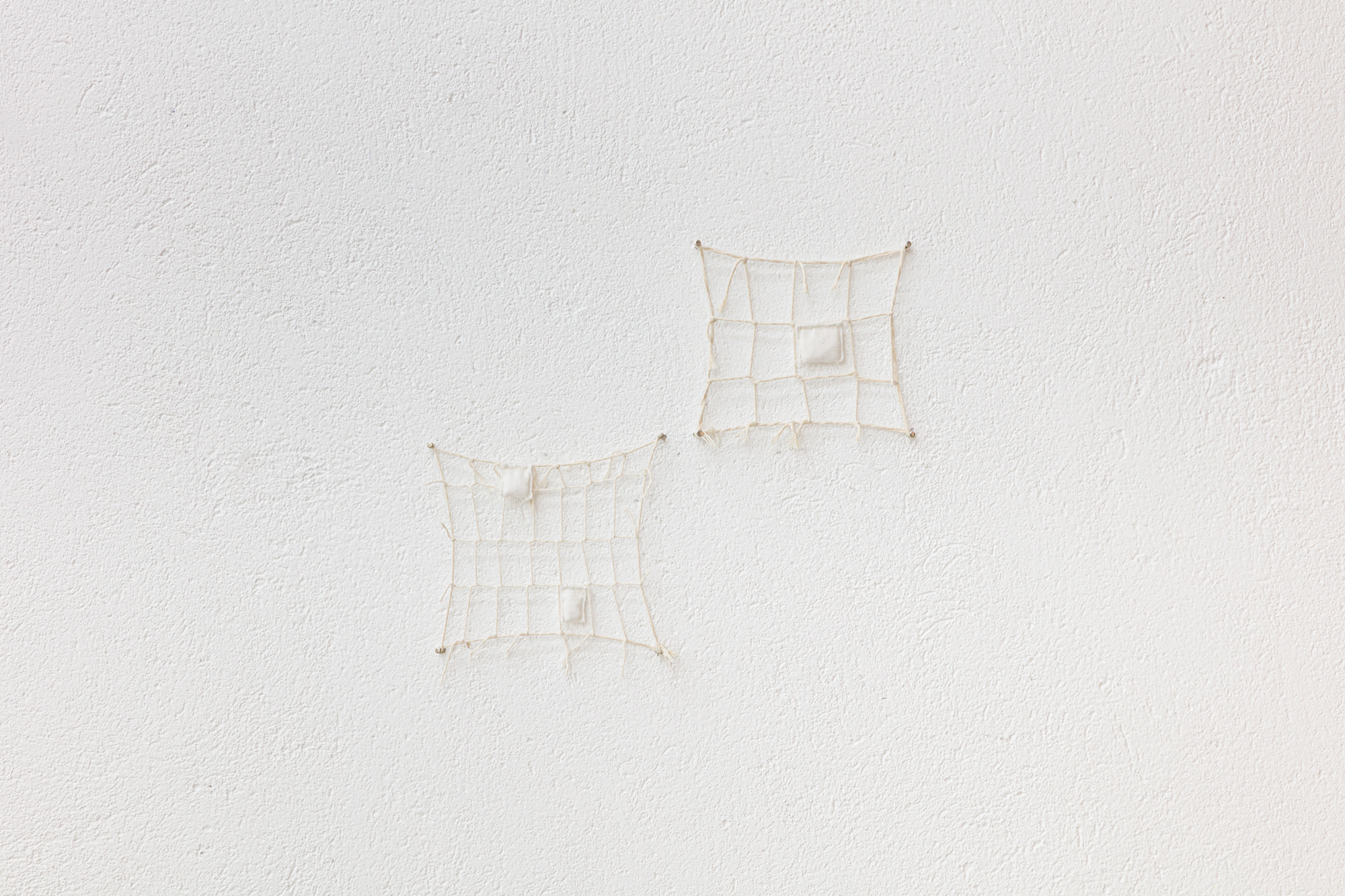 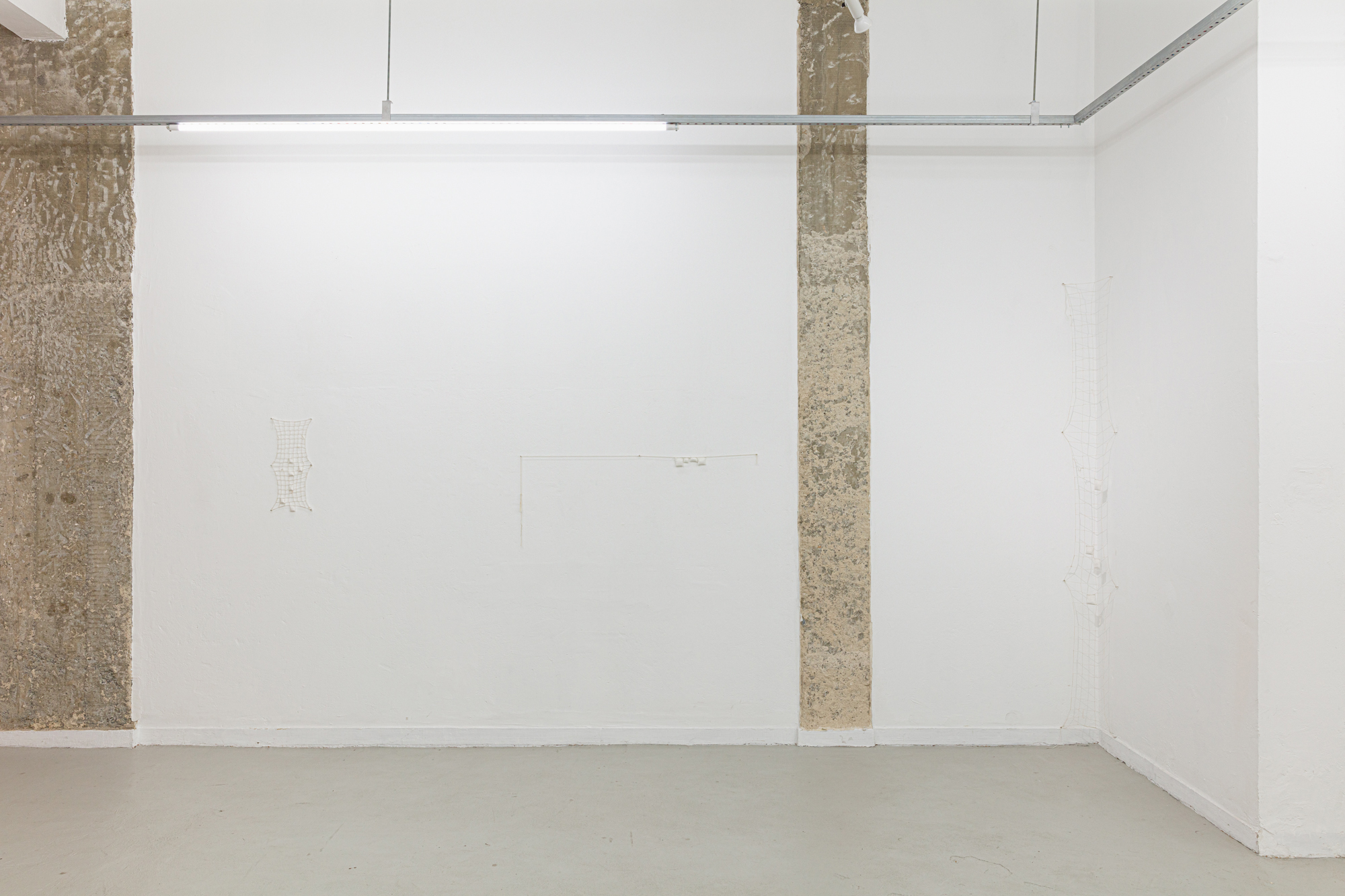 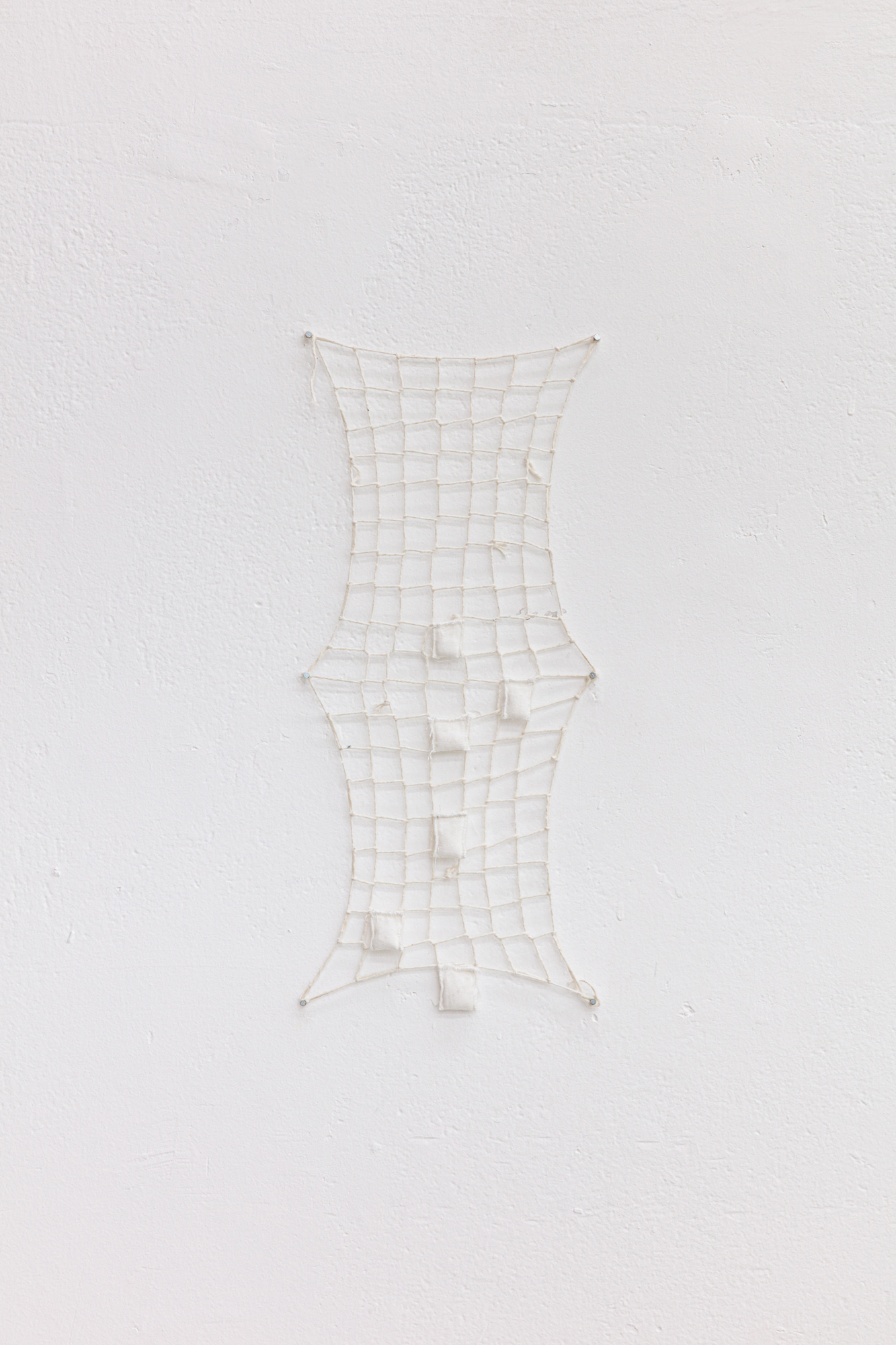 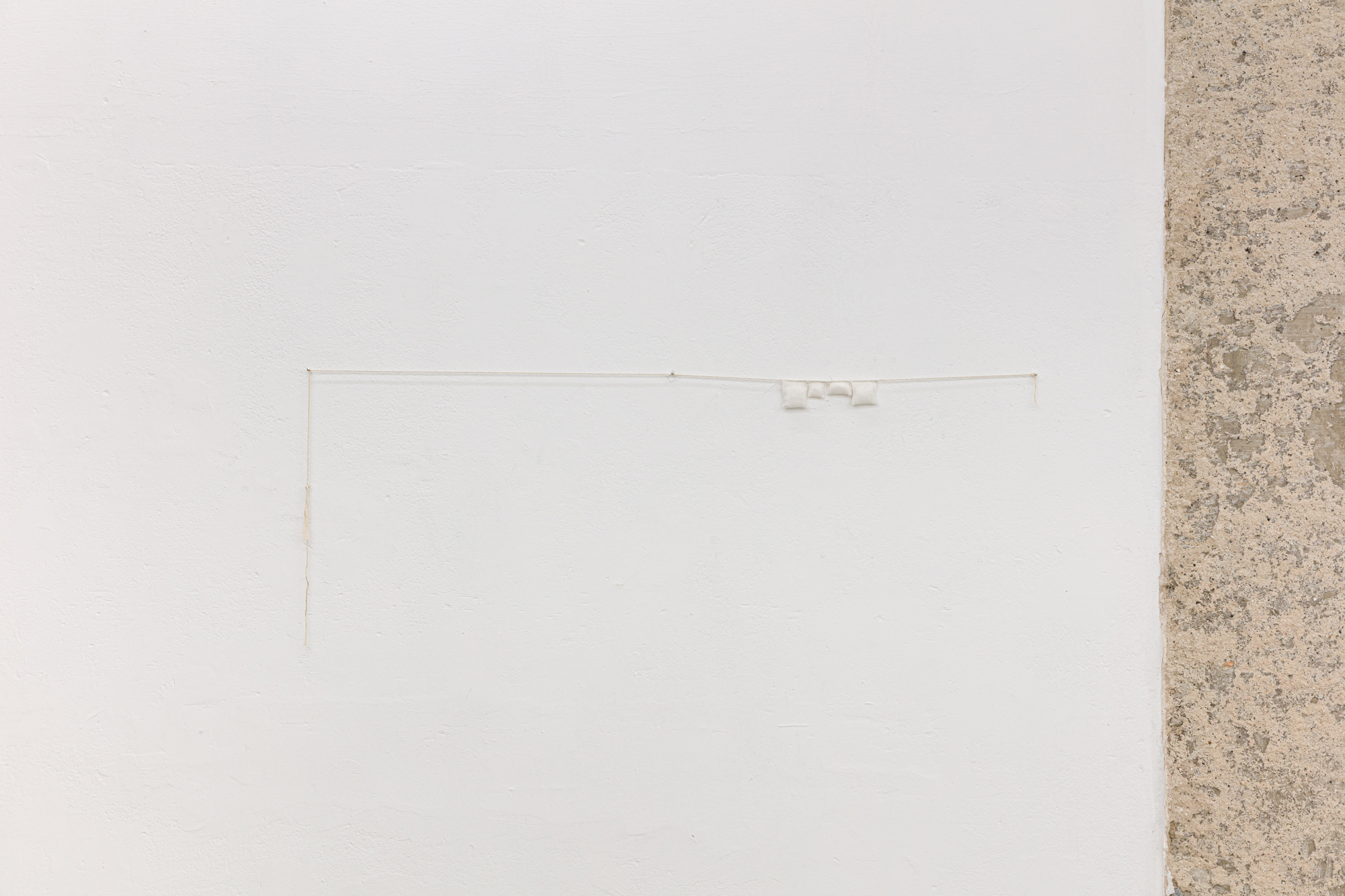 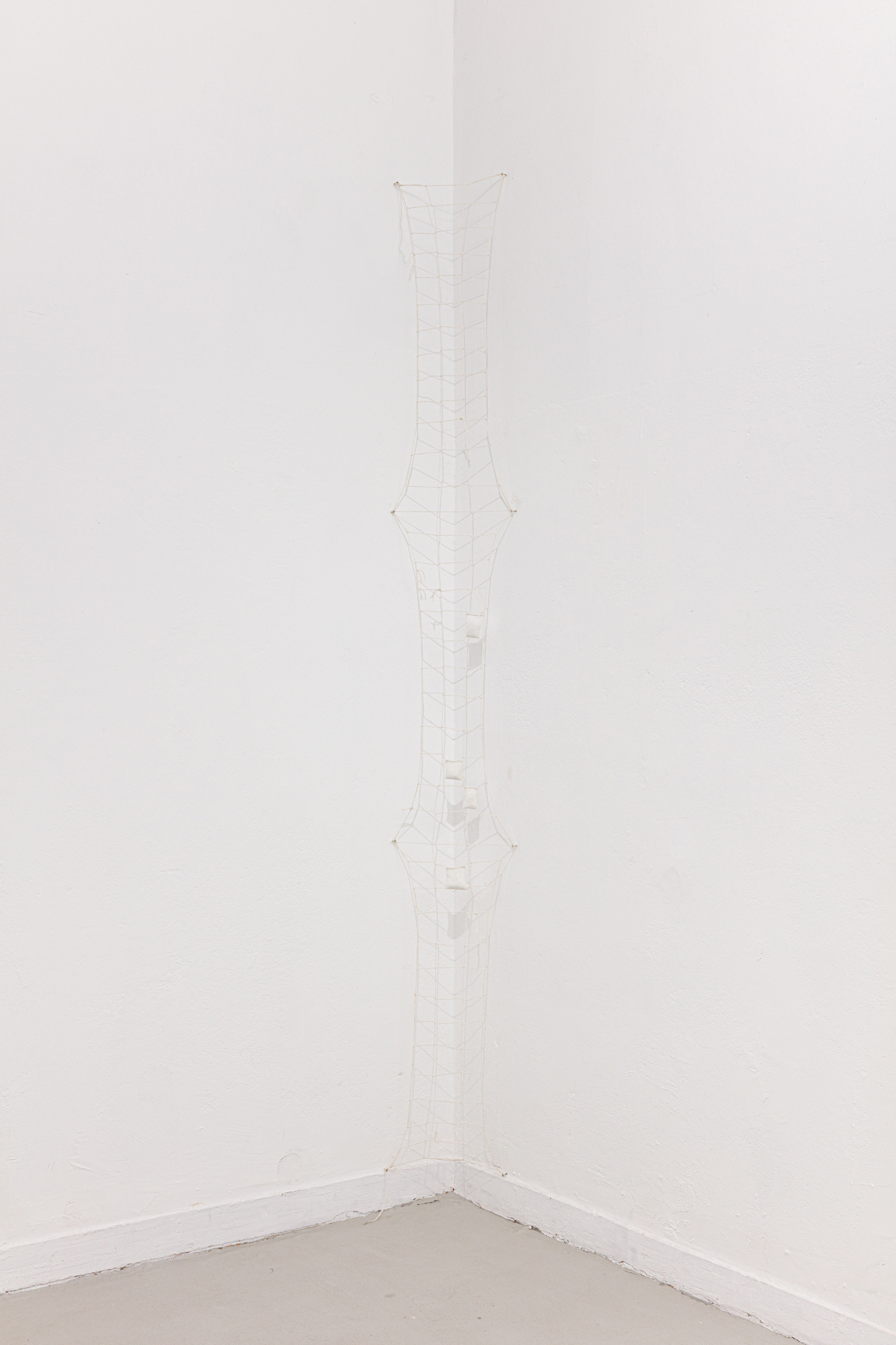 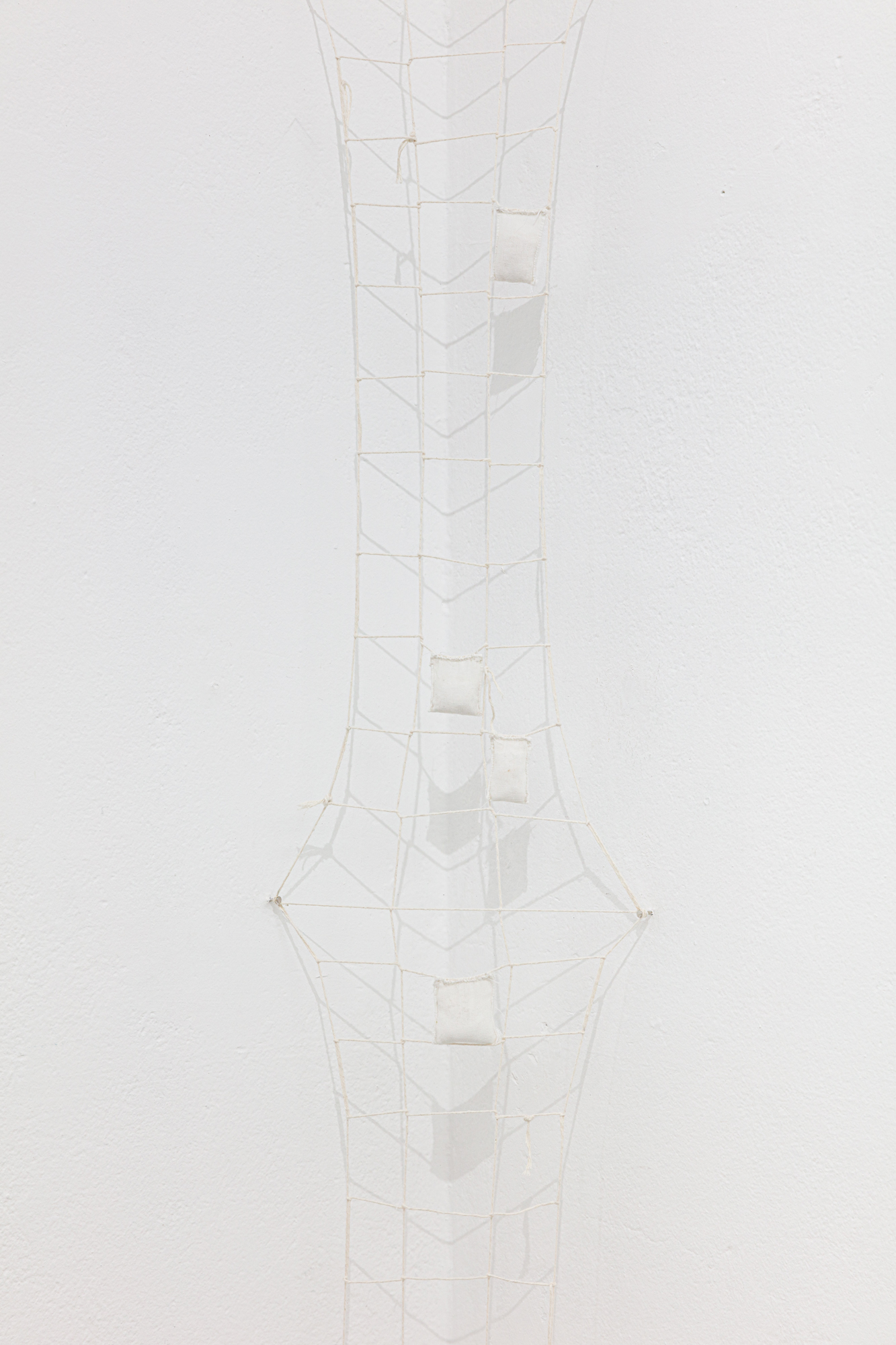 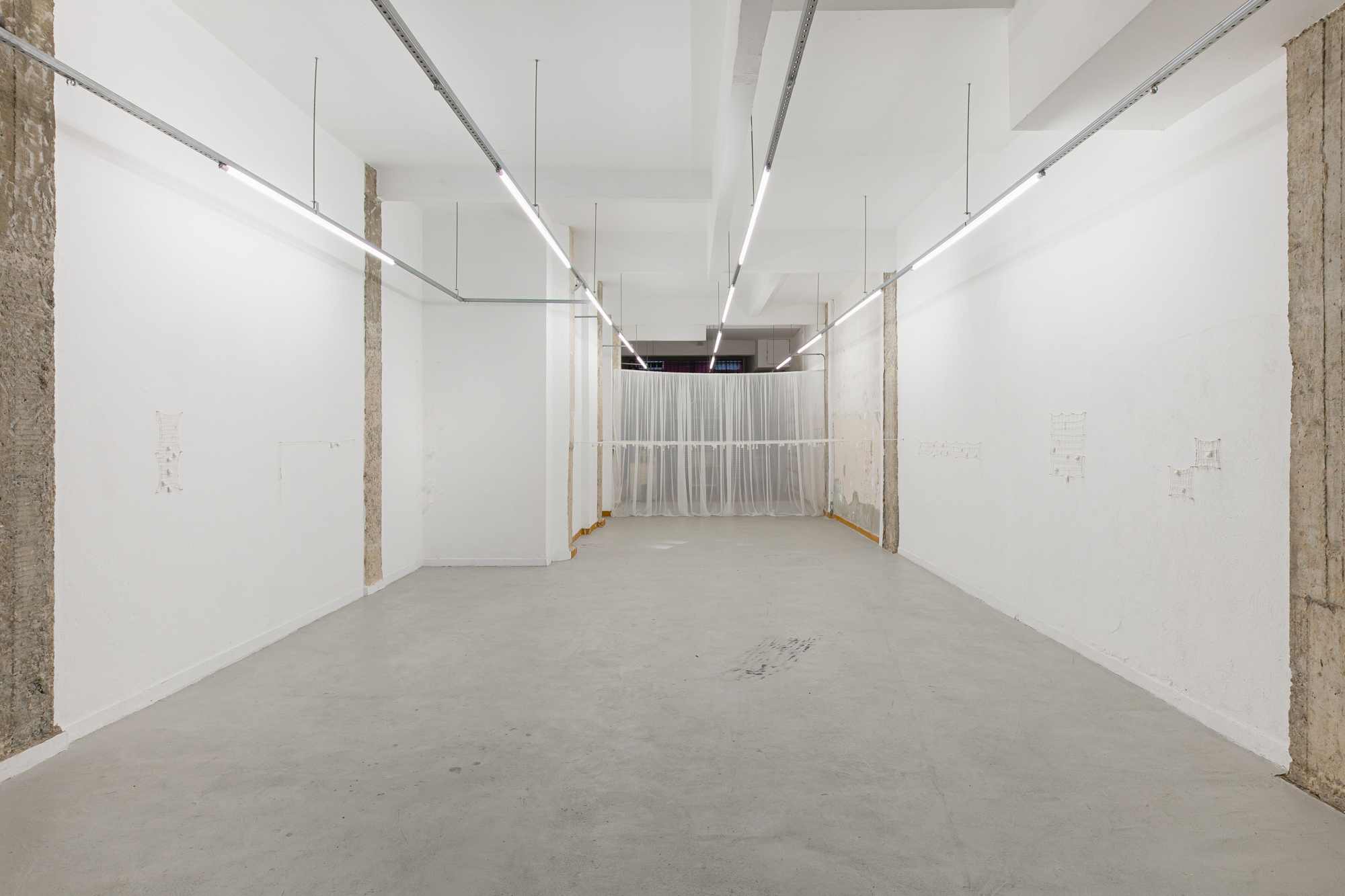 All images courtesy and copyright of Carolina Cordeiro and GDA. Photos by Ana Pigosso.

The project carried out for the exhibition is part of a trilogy in progress: América do sol, América do sal, América do sonho. (These titles are referenced after a phonetic game with the subcontinent name, South America, América do Sul in Portuguese, and are freely translated as sun america, salt america, dream america) Carolina Cordeiro chose to start the work with salt, weaving a large net of string inside the space. The net holds small bags of salt at different points. The height of the net is equivalent to the height of the artist's neck, bearing in mind that the bags can be thought of as ‘patuás’, a protection element, and the salt as a purification element and cleanliness, Cordeiro considered the fact that salt baths are always done from neck down, never directly over the head, so the measurement of your neck became the reference for the positioning of the net in space and also for the positioning of salt in all other nets.

The poet prays the chaplet,

and the thread runs inside,

without the poet seeing him,

So that’s how Magma begins, the first work of the writer from Minas Gerais, Guimarães Rosa, in his early days and in the midst of the chaplet preaching. In his debut work, Rosa groped the cure. From poem to poem, in a meditative tone and an anagogical impulse, he moved to the last verse in search of ascension. In this however initiating path, in dialogue with his land-continent and diving into internal and surrounding landscapes, Rosa approached the pains, prayers, poetic preachings and the free movement of the waters.

Today, Carolina Cordeiro shelters us in her force field. She inserts us in the drawing that projects protection and walks through a dialogue with her own prayers and inside forums. Her gestures of immersion gather in a mere allusion to the Rosiana literature, a mere approximation between the strength of the silence of those who pray with their chaplets and those who carry their patuás. But still, here also meets the scrutiny of the wisdom that lives in matter and things and that helps us to evoke a wake and raise our inner body.

In works such as Cheia or Água Benta, previous works by Carolina Cordeiro, the water course was already present. Now, although physically absent, he appears in América do Sal's visual imagery. After all, the image of bathing, cleaning and the flow of time that washes everything in its path hovers in the fabric that organizes the space. But if America is made of salt, built on dry land, on burned land, on healed land and sacred soil, it is also a field of tension. That's why, with the guide in hand (a fist that spins the soul thread), Carolina guides herself between the strings: part of the knot, the rope, the trapezoids and their oscillations to create space between the lock and the support. And along with the spatialized network, it aligns your body

to the surroundings – also lining up in its piece of infinity... And so, the prayer ends. And so, ends Magma.

I no longer need to laugh.

The long fingers of fear left my forehead.

And the vacancies dragged me

to the center of the whirlwind of great force,