Jessika Khazrik Nor The Society of False Witnesses / Abeyance & Concurrence 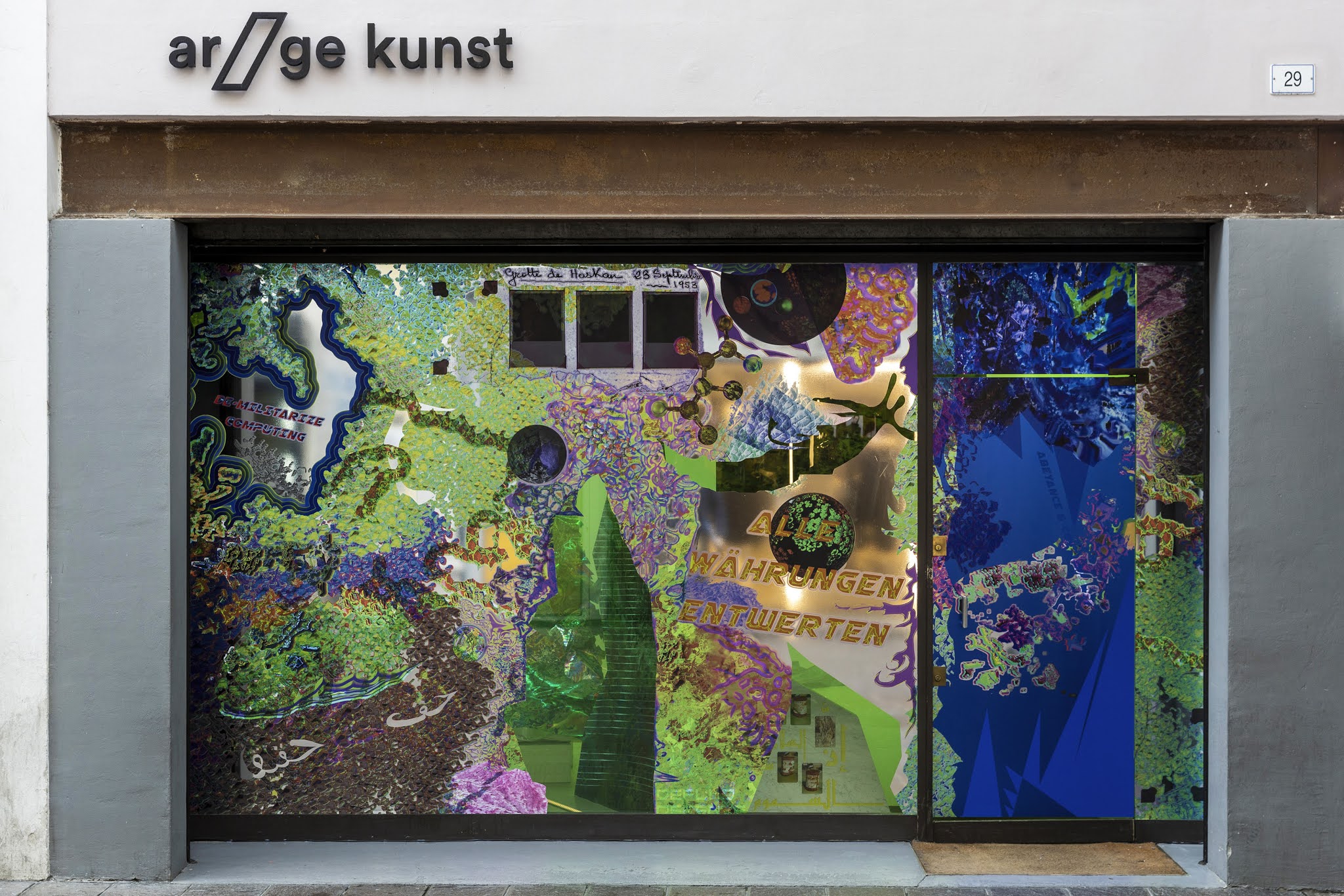 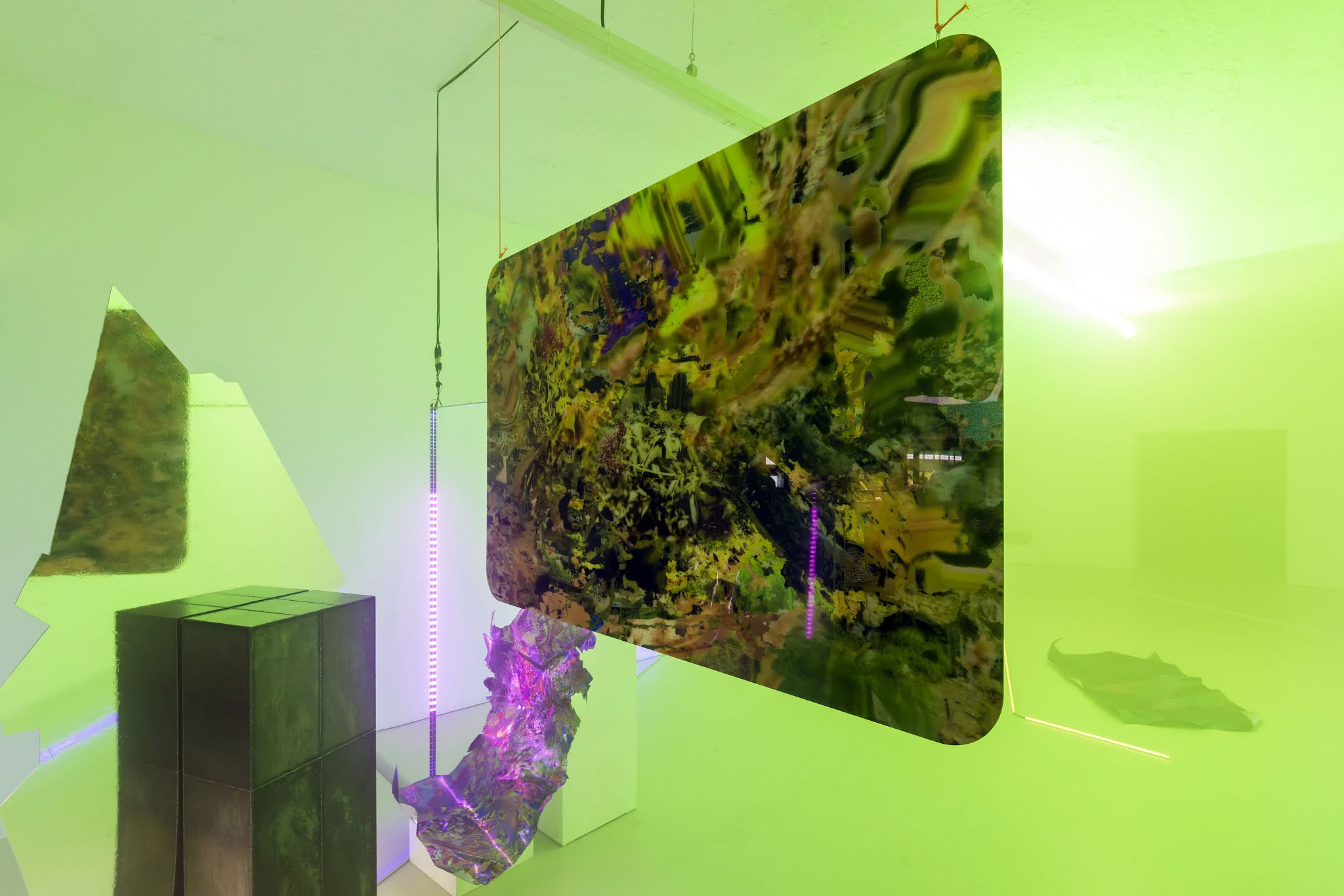 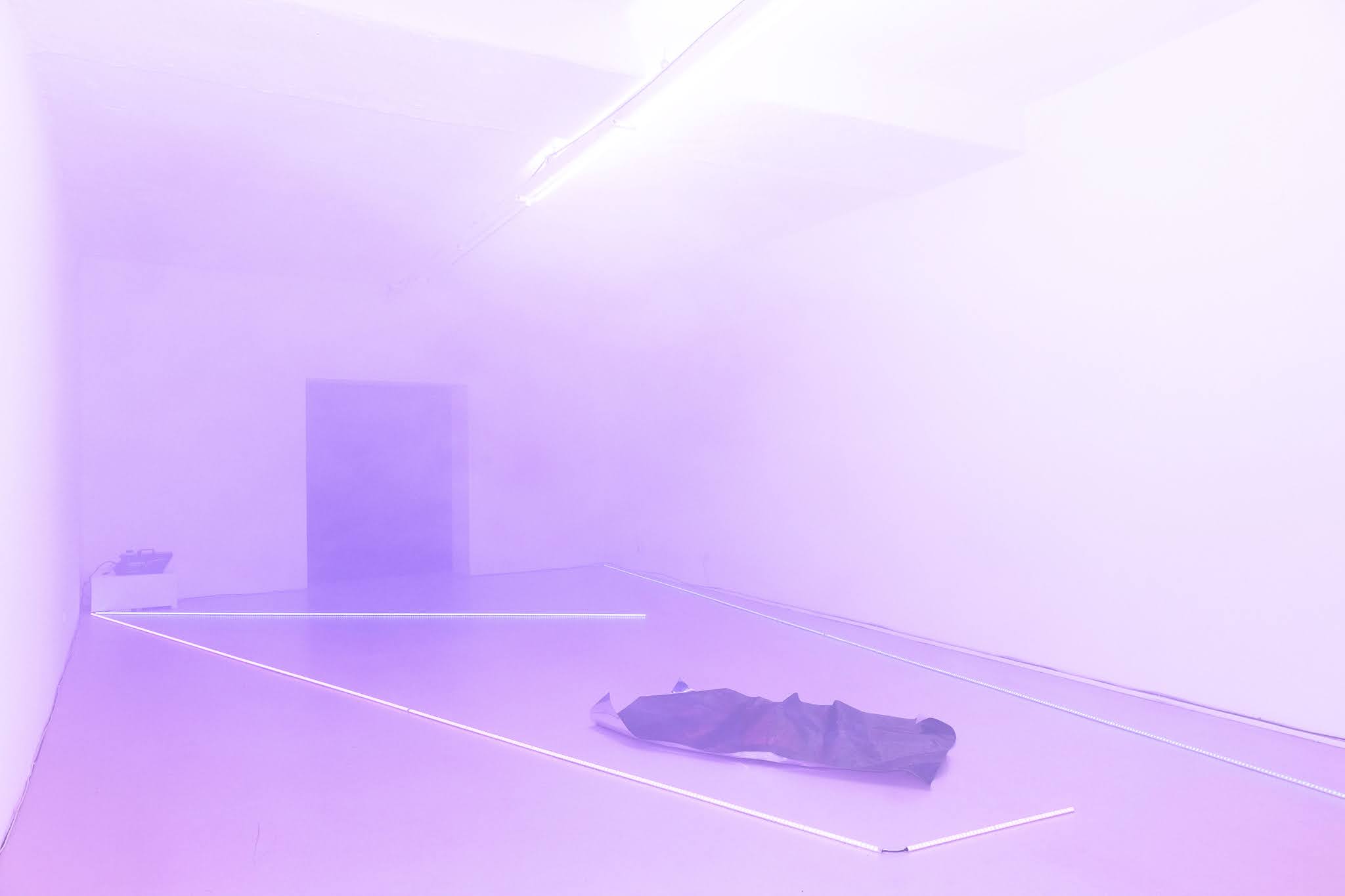 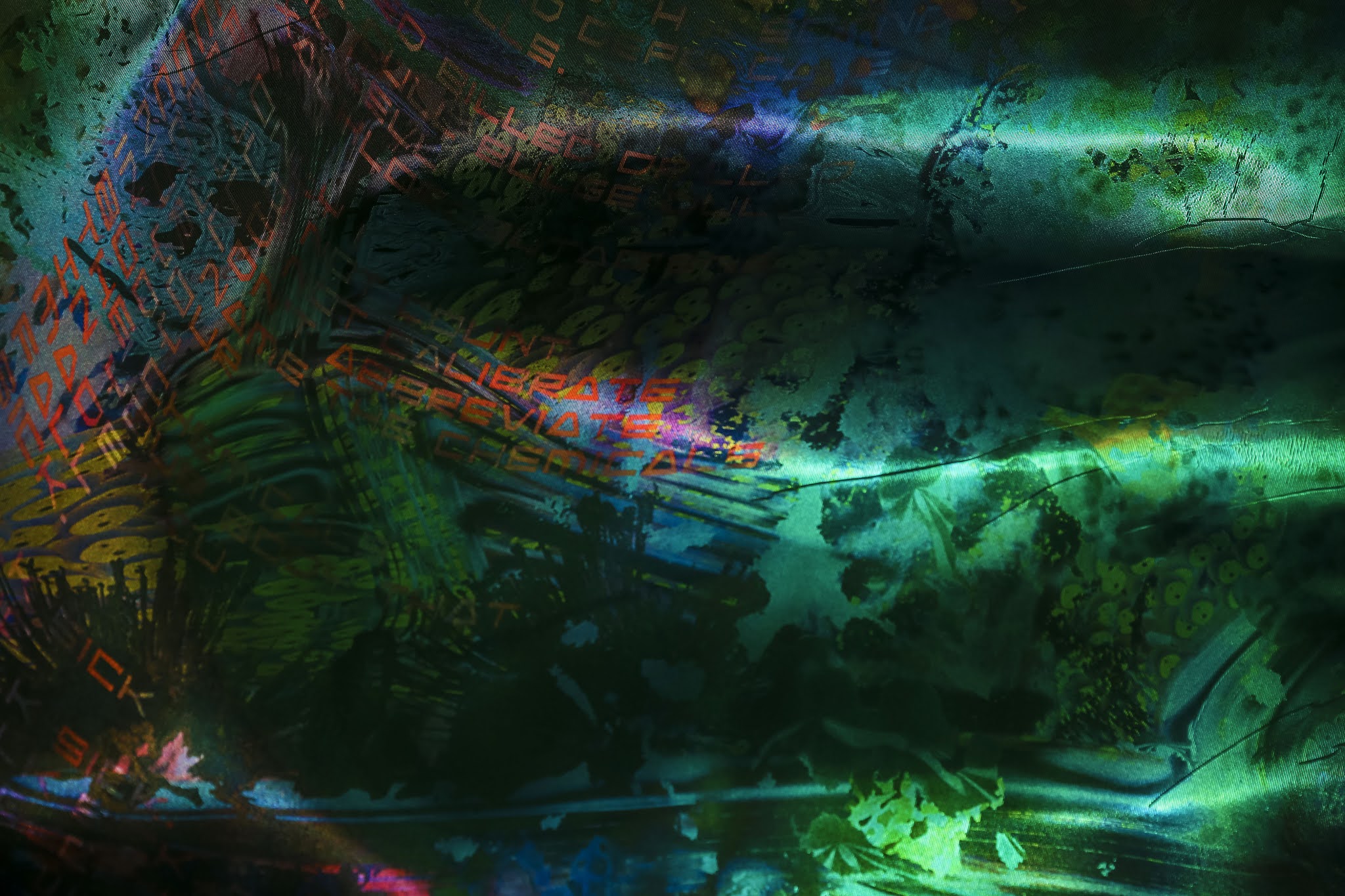 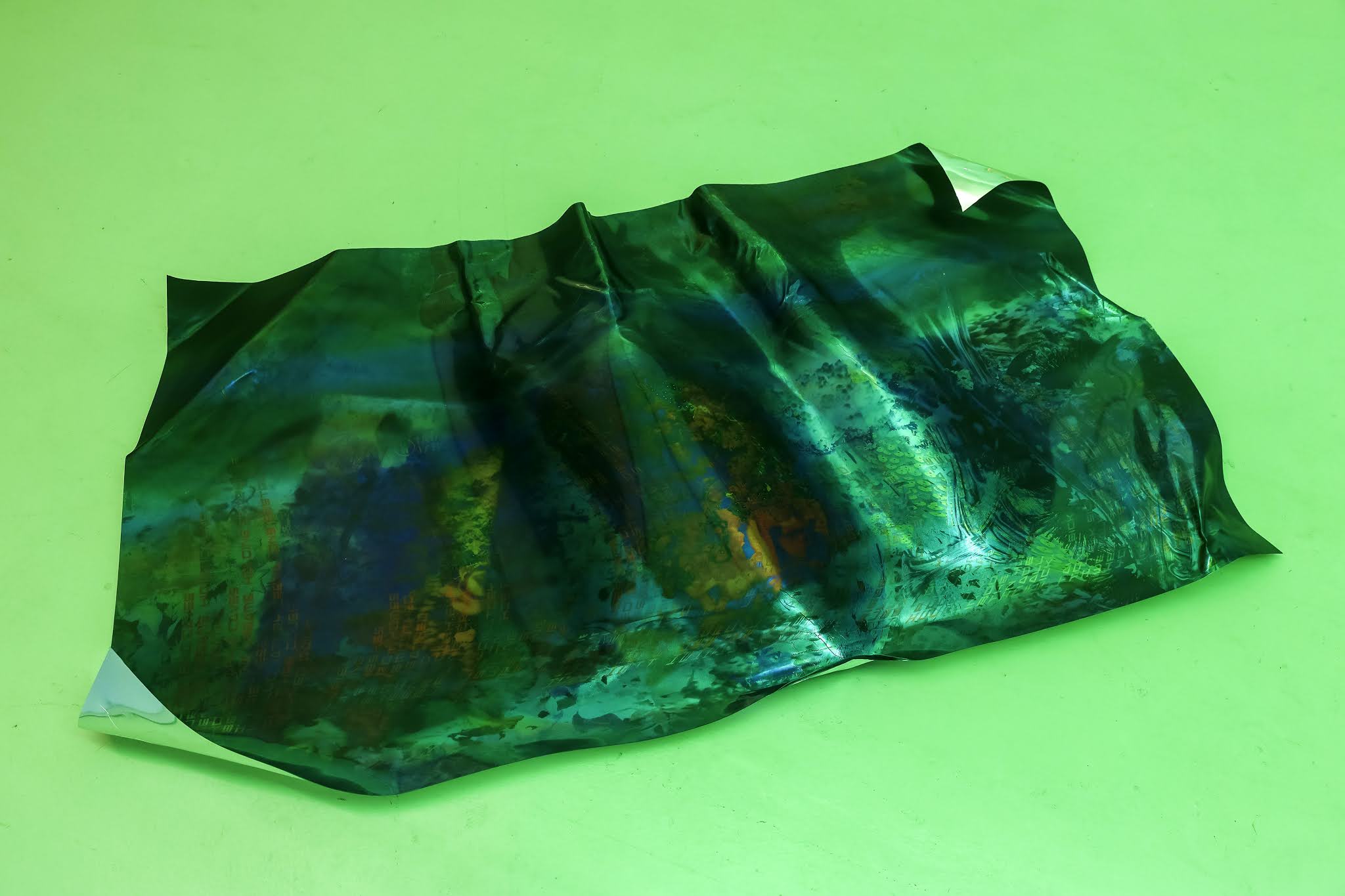 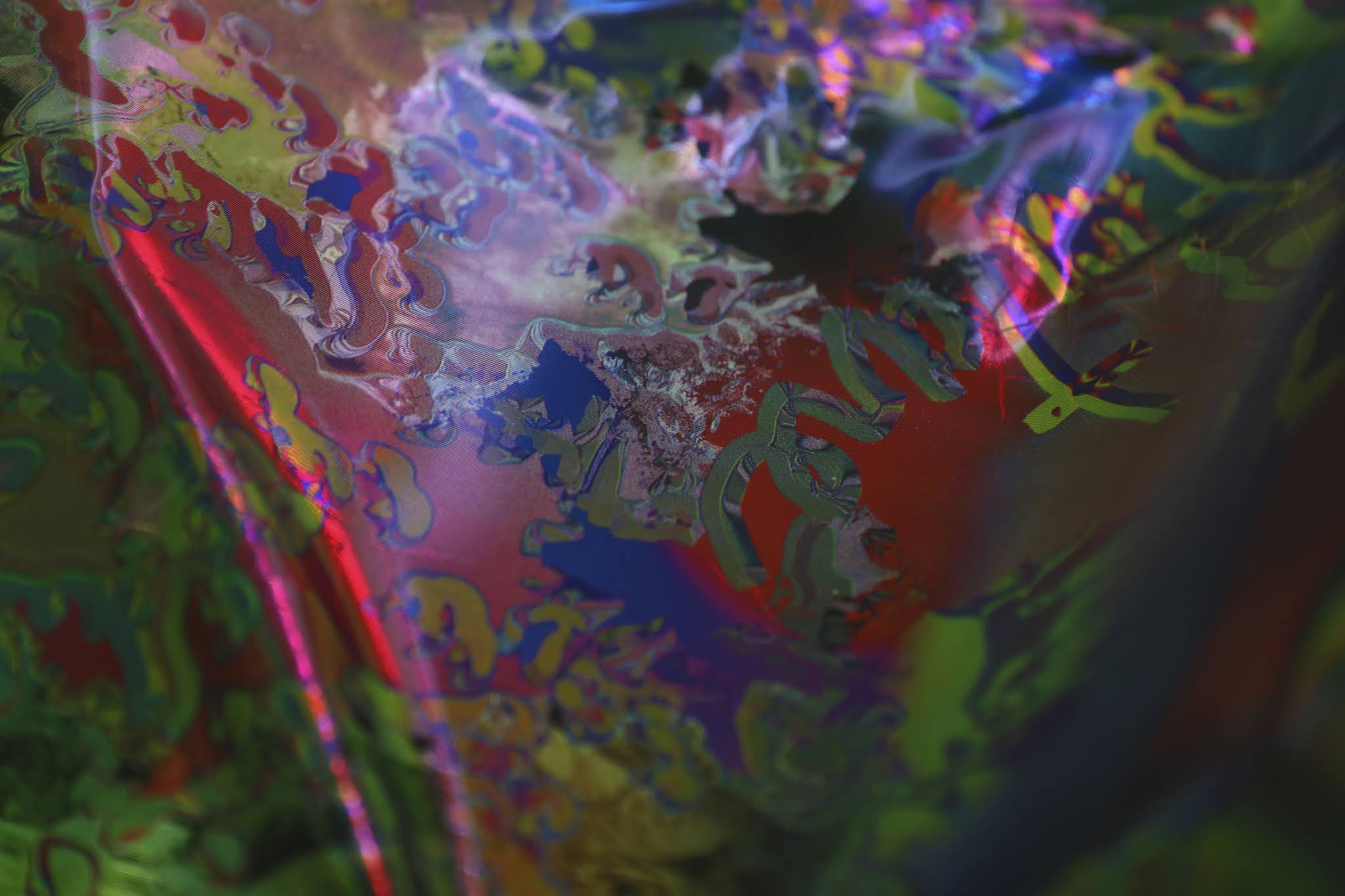 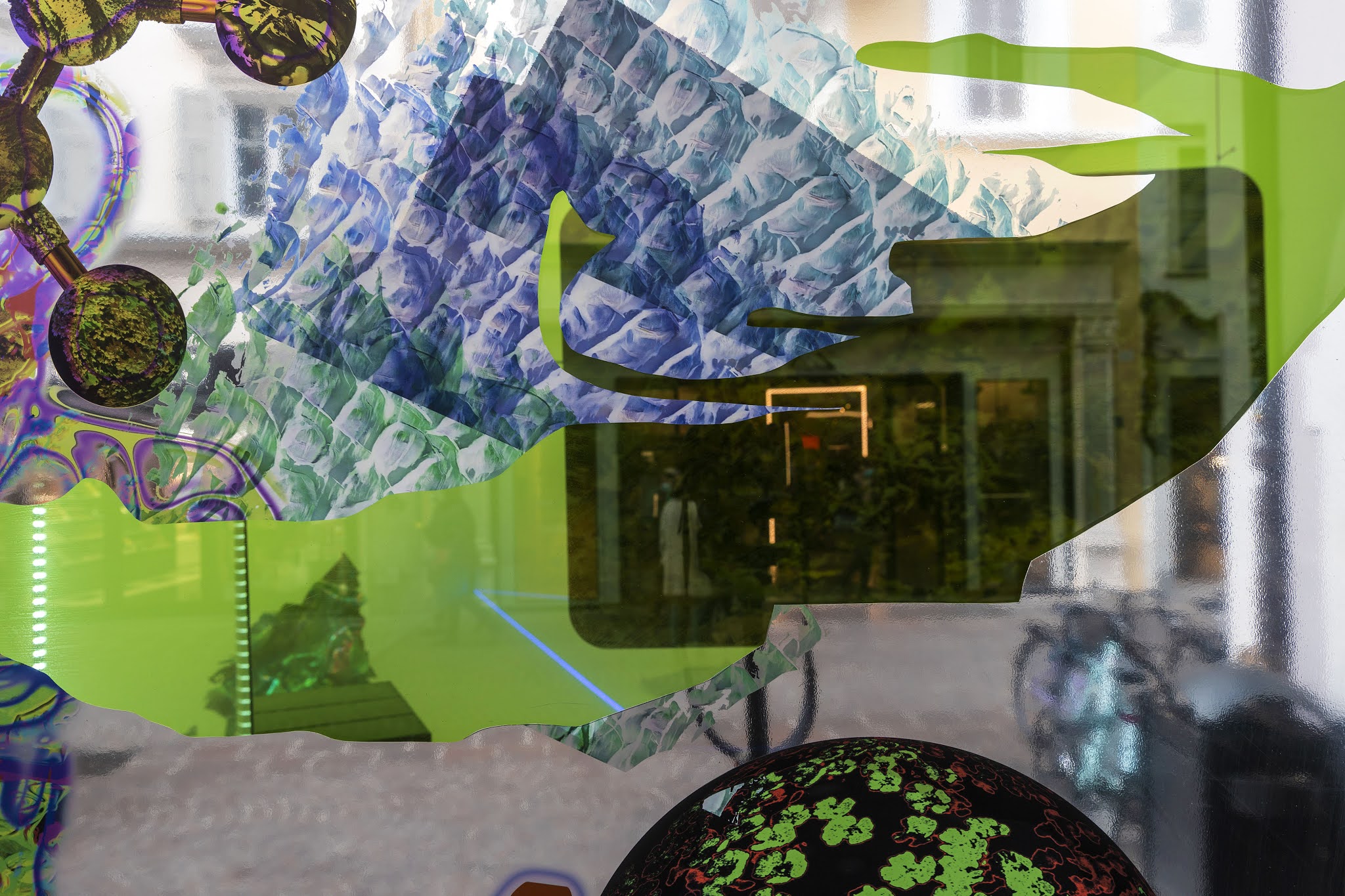 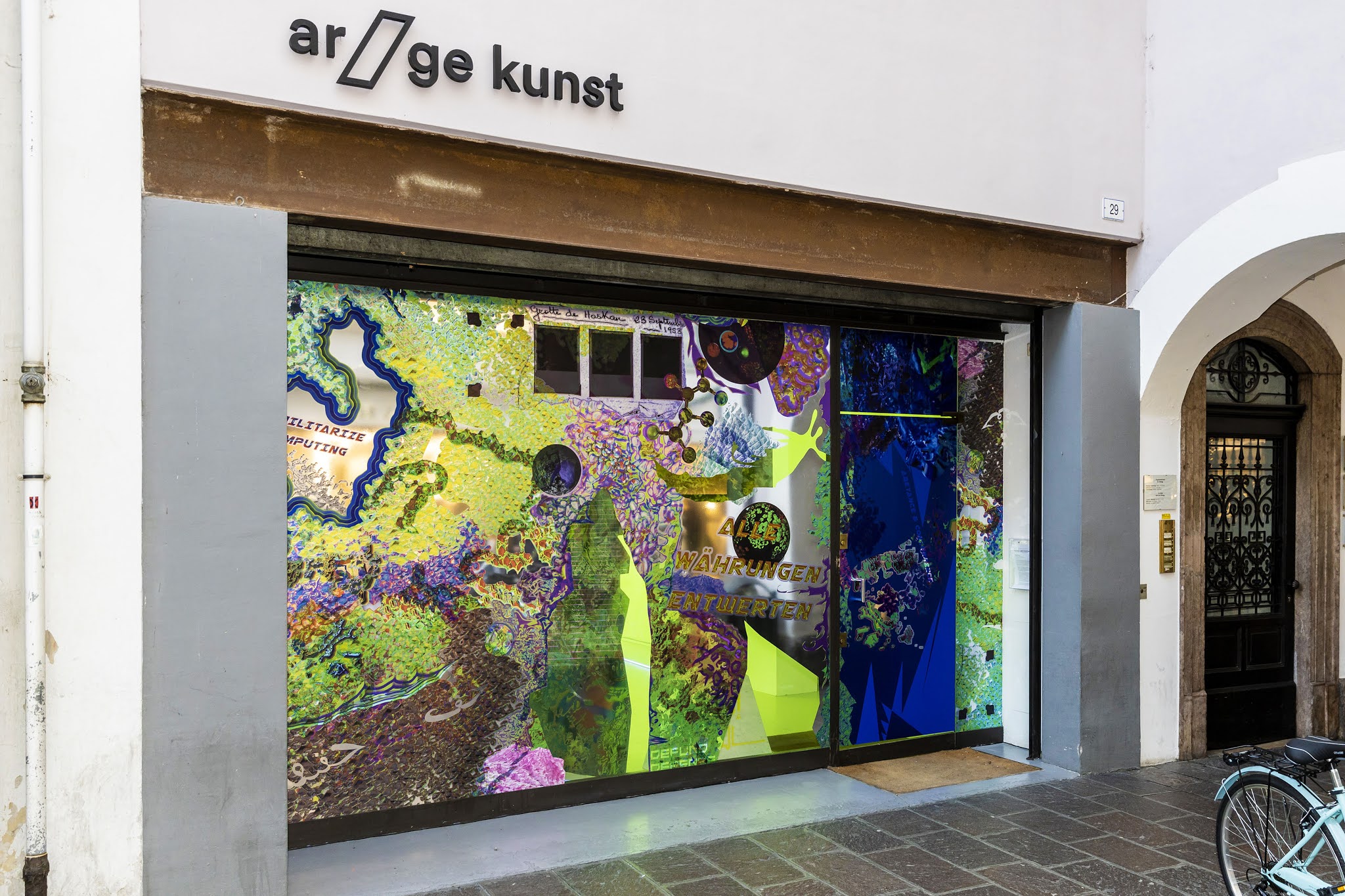 For her first solo exhibition in Italy, Jessika Khazrik nor The Society of False Witnesses has reconfigured her work to assume the form of a multi-layered, remotely controlled installation that can be exclusively experienced from the street, despite current regulations of closure. Abeyance & Concurrence acts as a response to the protracted temporality of the (post-)coronial present and discarded past in light of recent collective and personal experience of uprising, solidarity and arrest. It attempts to appose the structural fault lines of the international law with the colossal eruption of slow violence and the concurrent search for transformative justice through collective disruption.

Having had to recently relocate from Beirut to Berlin with her right to mobility still withdrawn, Jessika Khazrik nor The Society of False Witnesses has rendered the premises of ar/ge kunst accretively accessible by turning its vitrine into a refractive, multilingual platform, broadcasting sound, light, smoke, code and optical illusion. These multi-sensorial elements are operated long-distance, from the artist’s studio in Berlin, with the support of allies in Bozen/Bolzano. ar/ge kunst’s interiors will remain inaccessible throughout the show’s duration.

Abeyance & Concurrence extends from Blue Barrel Grove, the artist’s ongoing indisciplinary research project that began in 2013 with an investigation into a secret toxic waste trade conducted between Italy and Lebanon in 1987 and partially dumped in a quarry adjacent to the artist’s childhood home. Abeyance & Concurrence is a continuation of her meticulous inquiries while studying the complex ties between ecocide as armament and banking as statecraft, and necessarily reacting to the latest occurrences that impacted her home and life—the October 2019 Revolutions, her dispossession and unlawful arrest during Lebanon’s ongoing banking crisis, the August 2020 explosion and the Covid-19 syndemic*.

It urgently investigates the abeyant links between the political economy of sanitization and state hygiene and the regimes of invisibility and co-morbidity that follow the disregard and circulation of toxic waste and weaponry. The act of examining the body becomes an act of examining the state.

Strata of steganographic images and lenticular sculptures created and computed by the artist using machine learning coupled with a collage of photographs found in scientists’ domestic laboratories are superimposed on to the mirrored street window of ar/ge kunst. Short phrases in Arabic, German, Italian and English calling for the demilitarization of computing, industrial disarmament and the collective establishment of a universal anti-currency are subsumed within this iridescent stratification. Cut-outs of this ‘frontal screen’ render the gallery’s interiors only partially permeable, view-able and audible. Using the glass vitrine as a platform for transmission and friction, the artist has built an 8-channel speaker system out of sound exciters and weather-proof speakers used on ships. Several sound pieces and conversations around trans-regional alliance, healing, and nanopunk are accumulatively hosted on the throbbing DIY sound system comprised of transducers. This dynamic diorama will be subject to variations and transformations during the un-known course of the show.

*  Developed by medical anthropologist Merrill Singer in 1995, a syndemic is the aggregation of two or more concurrent or sequential epidemics or disease clusters in a population with biological interactions which exacerbate the prognosis and burden of disease. Syndemics develop under health disparity, caused by structural violence.

Jessika Khazrik (b. 1991, Beirut) is an artist, technologist, electronic music producer and researcher whose indisciplinary practice ranges from composition to ecotoxicology, machine learning, cryptography, performance, visual art and history of science and music. Khazrik holds BAs in Linguistics and in Theatre from the Lebanese University and a MS in Art, Cul-ture and Technology from MIT where she was awarded the Ada Lovelace prize. In 2012-13, she was a fellow at Home Workspace Program in Ashkal Alwan and in 2018-19, a fellow at the Digital Earth. While concurrently working as technologist and researcher in different collective and institutional settings, her work has been presented at The Normandy Landfill, the Stanford Research Institute, CTM Festival, Manifesta Biennale, the Arab Image Foundation, Kunsthalle Wien, Les Urbaines, the Museum of Modern Art Warsaw, Times Museum Guangzhou, LUMA Foundation, Haus der Kulturen der Welt, Amnesty International, Center of Documentary Arts and Research at UC Santa Cruz, her house, the internet, secrets and Theater der Welt, among others. Her essays and short stories have been published in Bidayat Journal, Kohl Journal, The Funambulist, Almodon and Ibraaz, to name a few. Besides her solo practice, Khazrik composes the sound-track of the GEOCIN