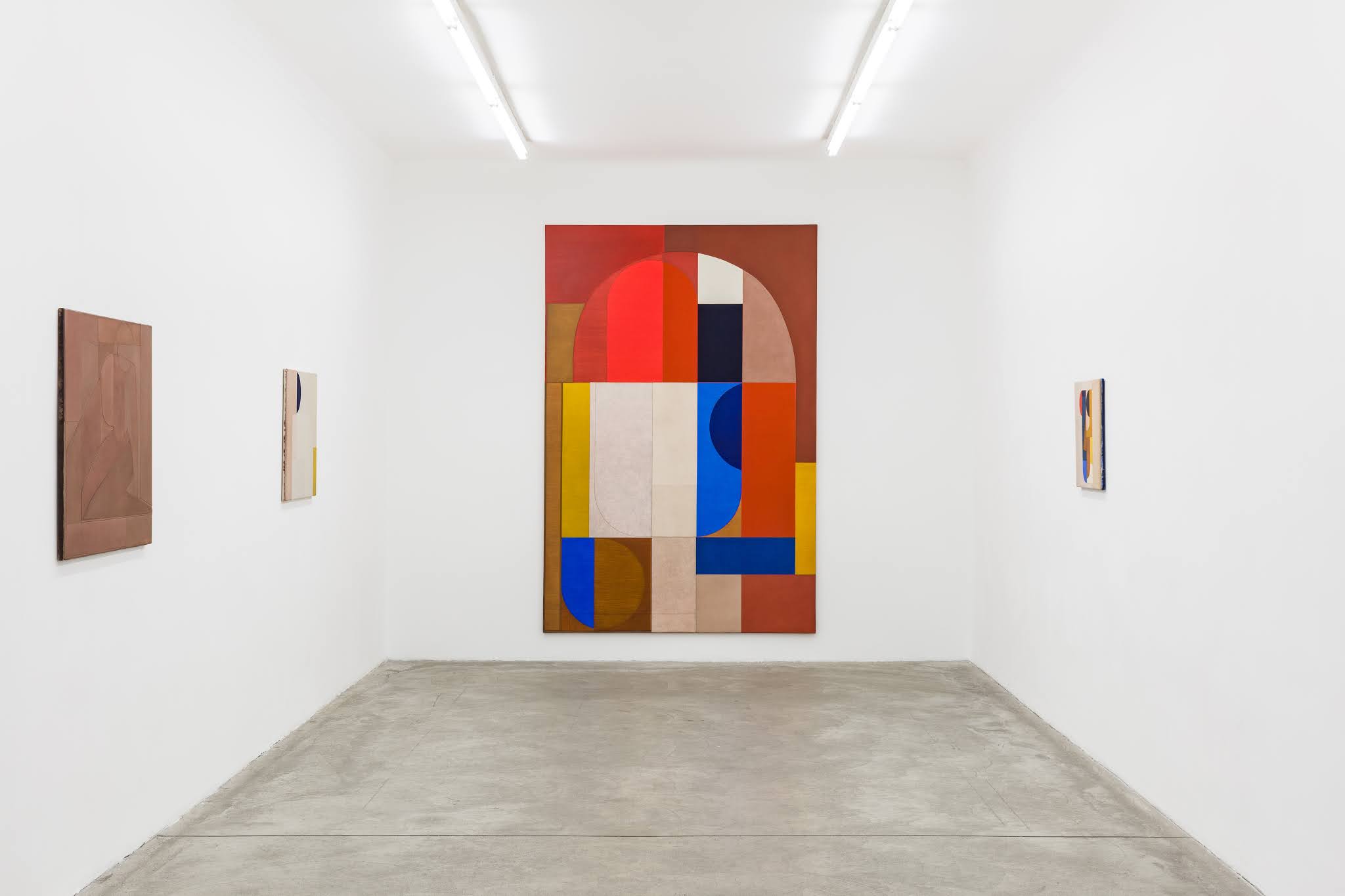 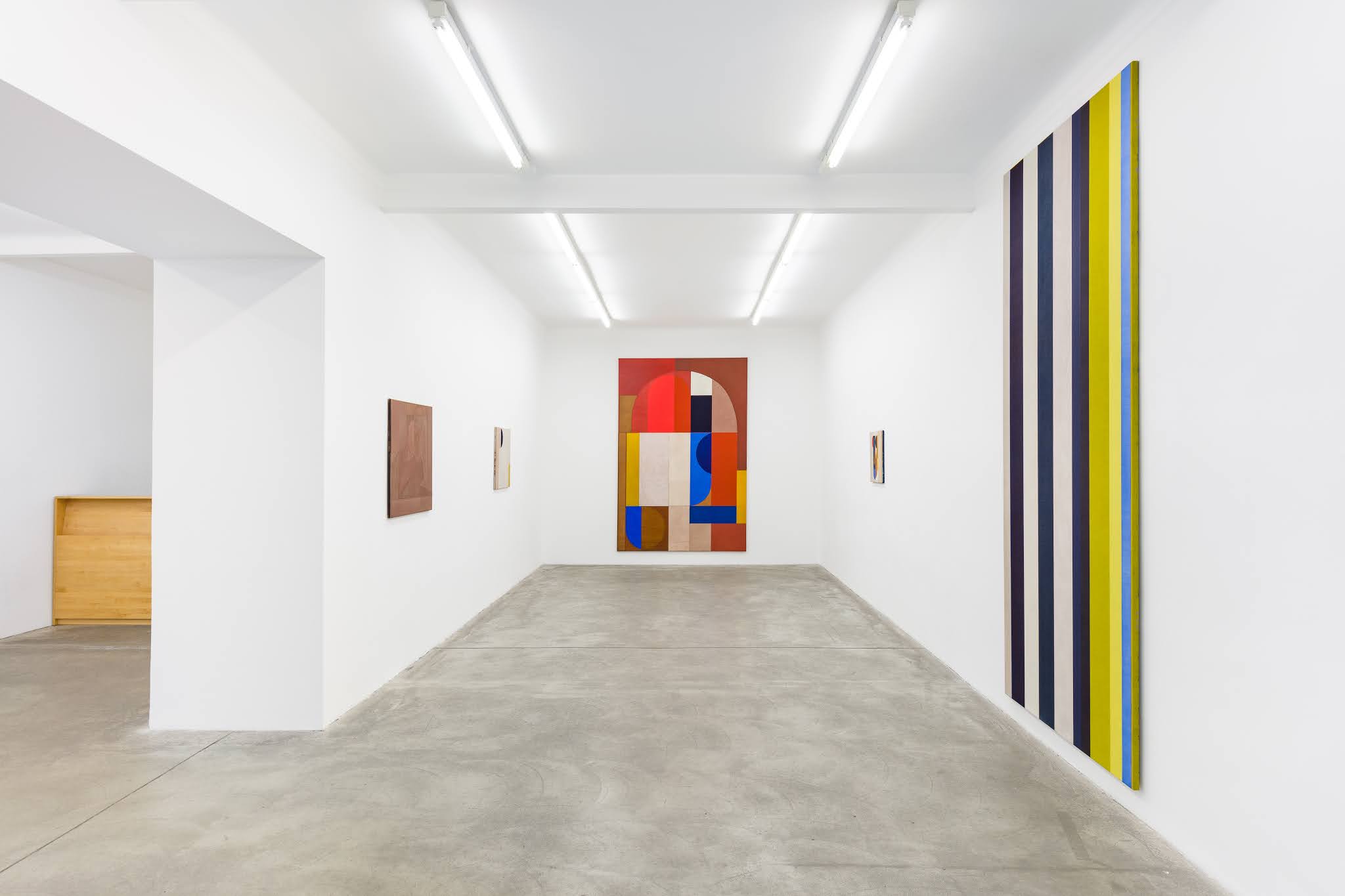 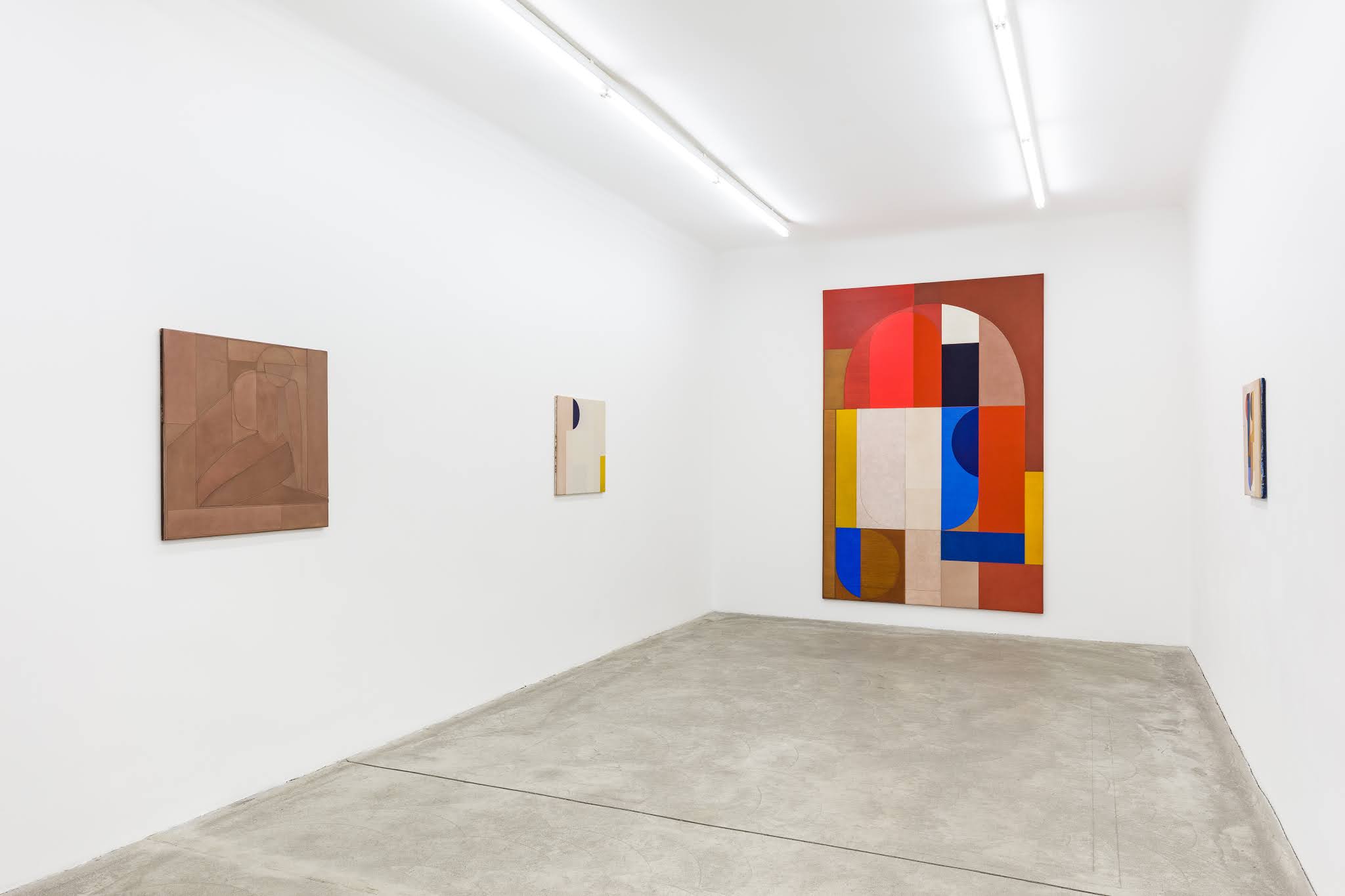 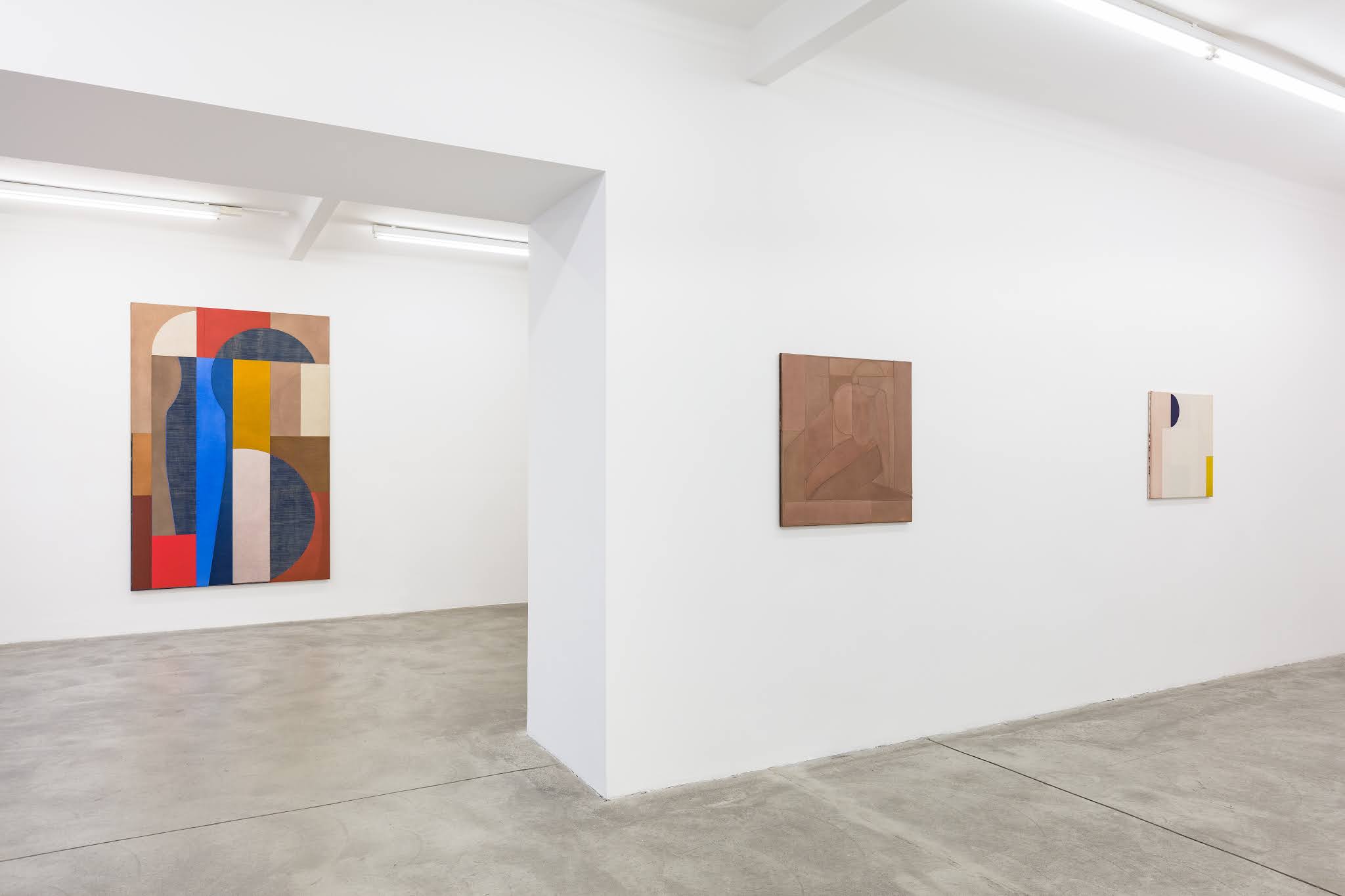 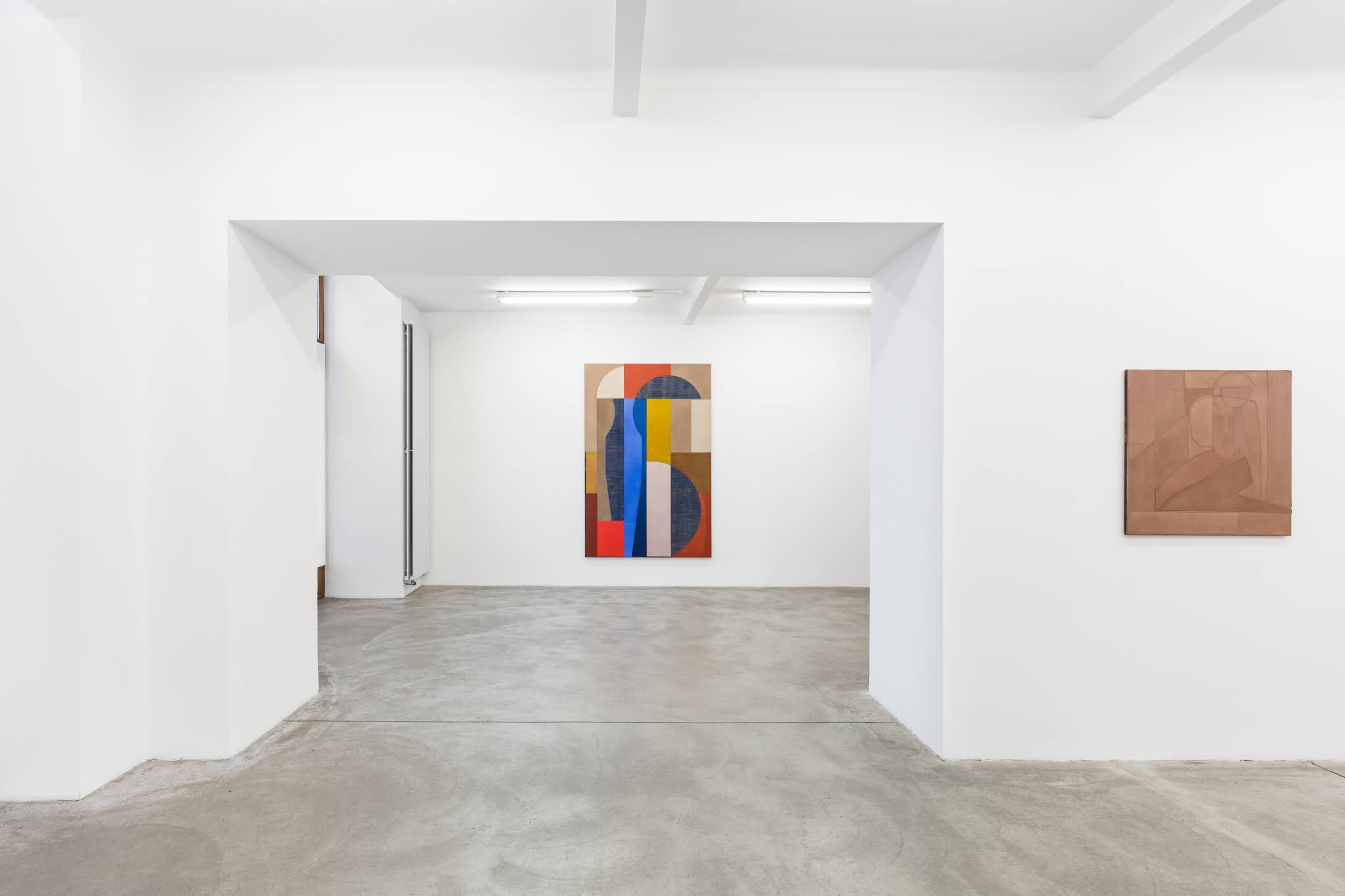 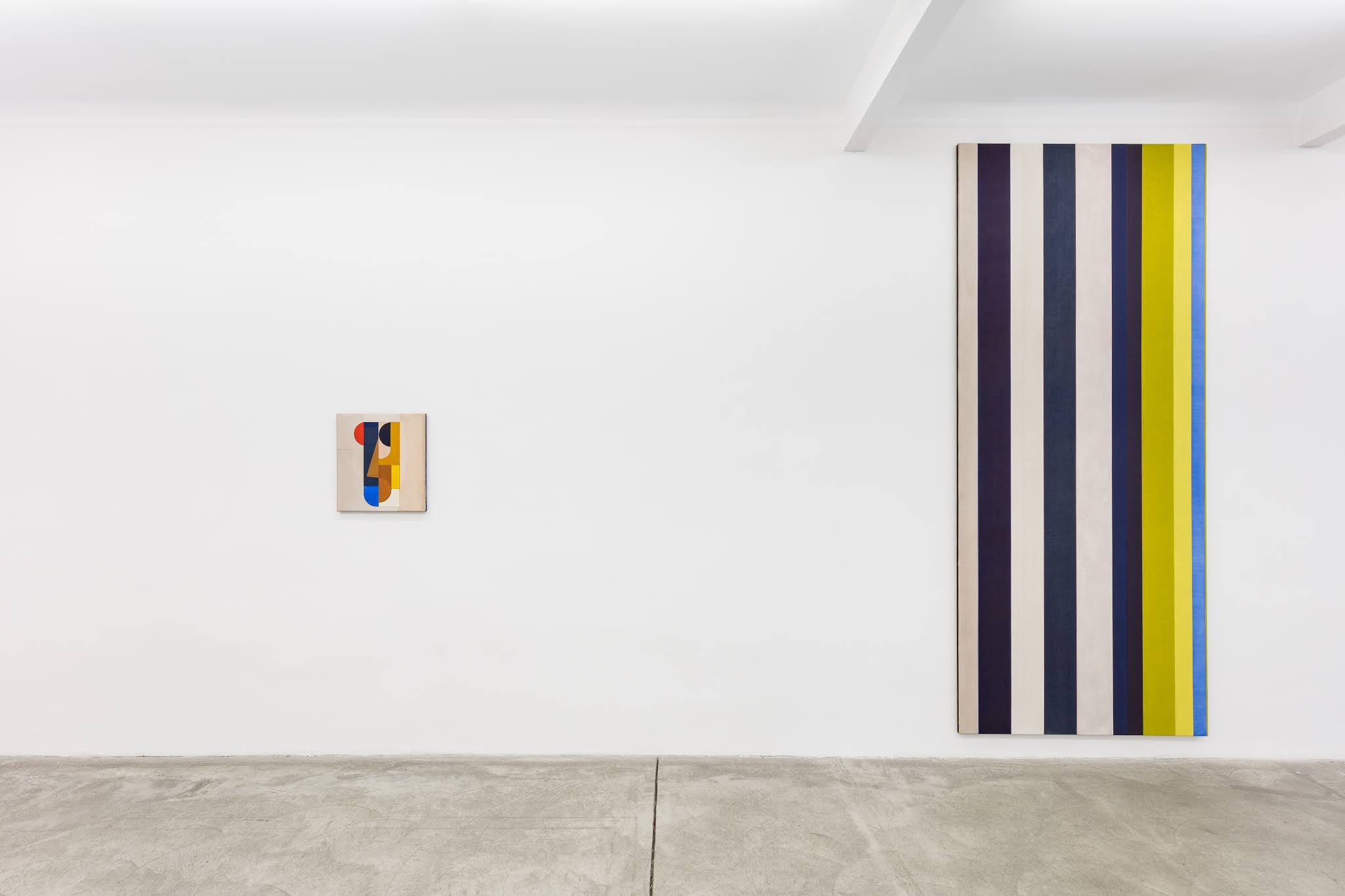 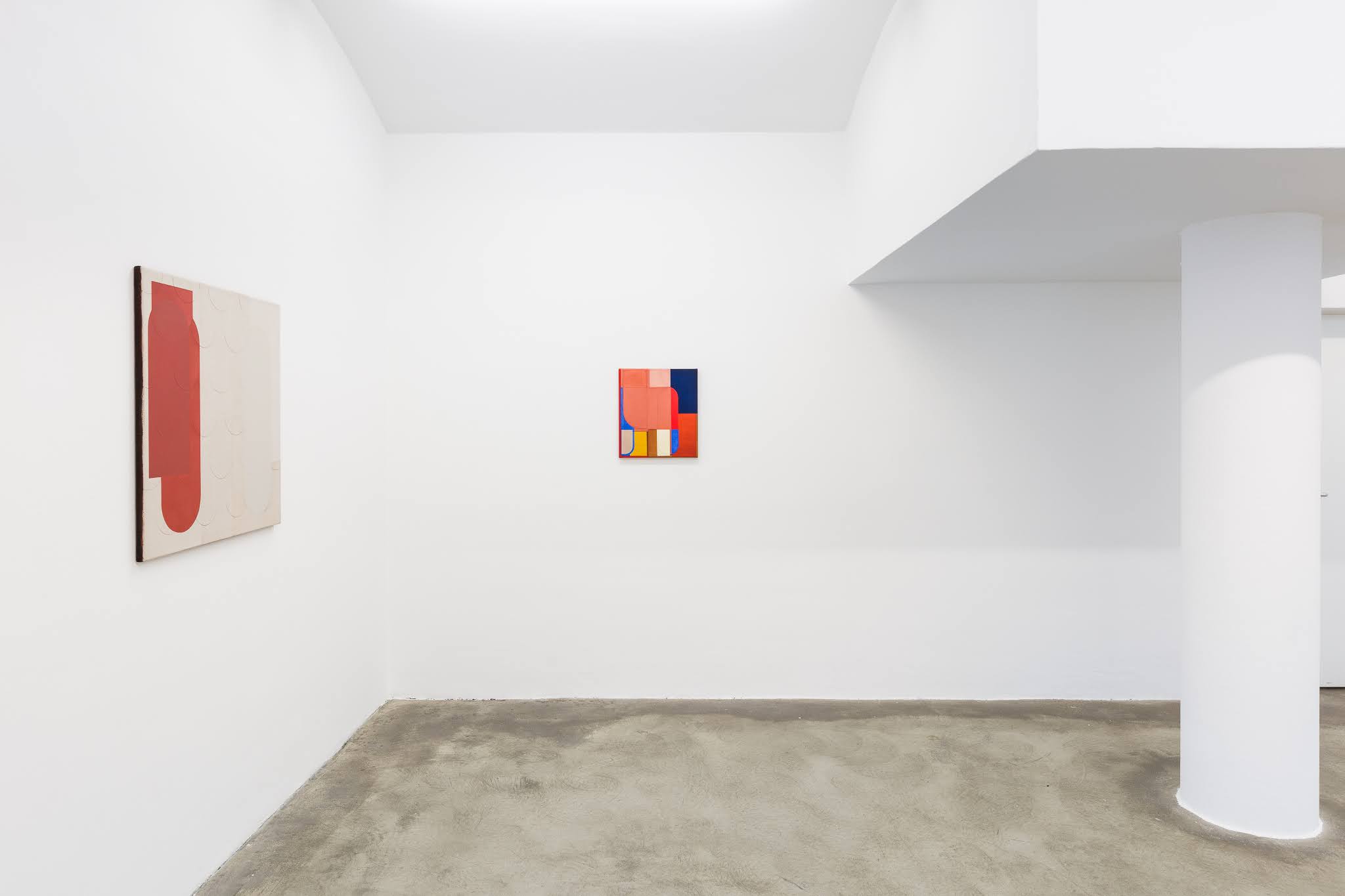 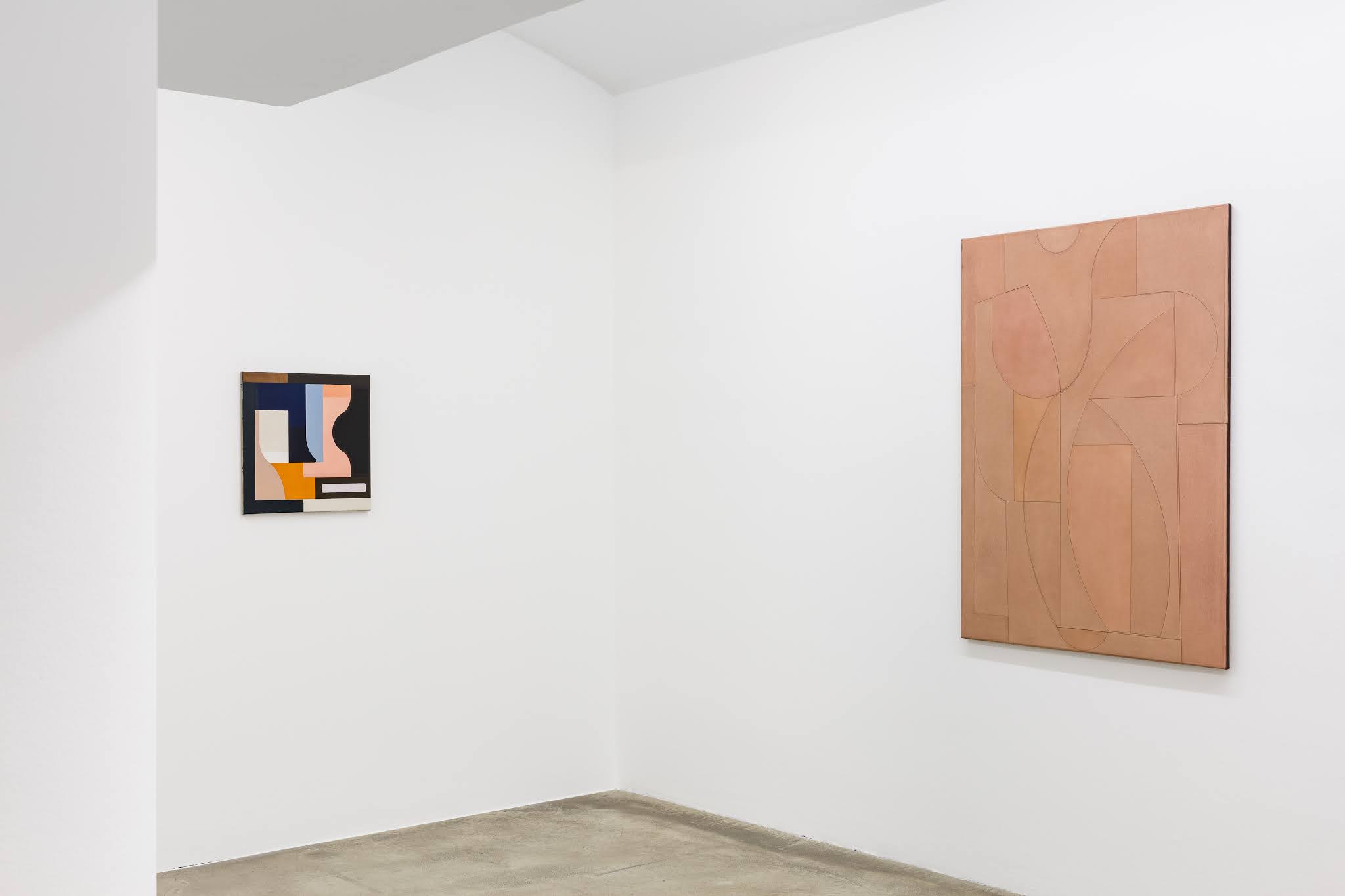 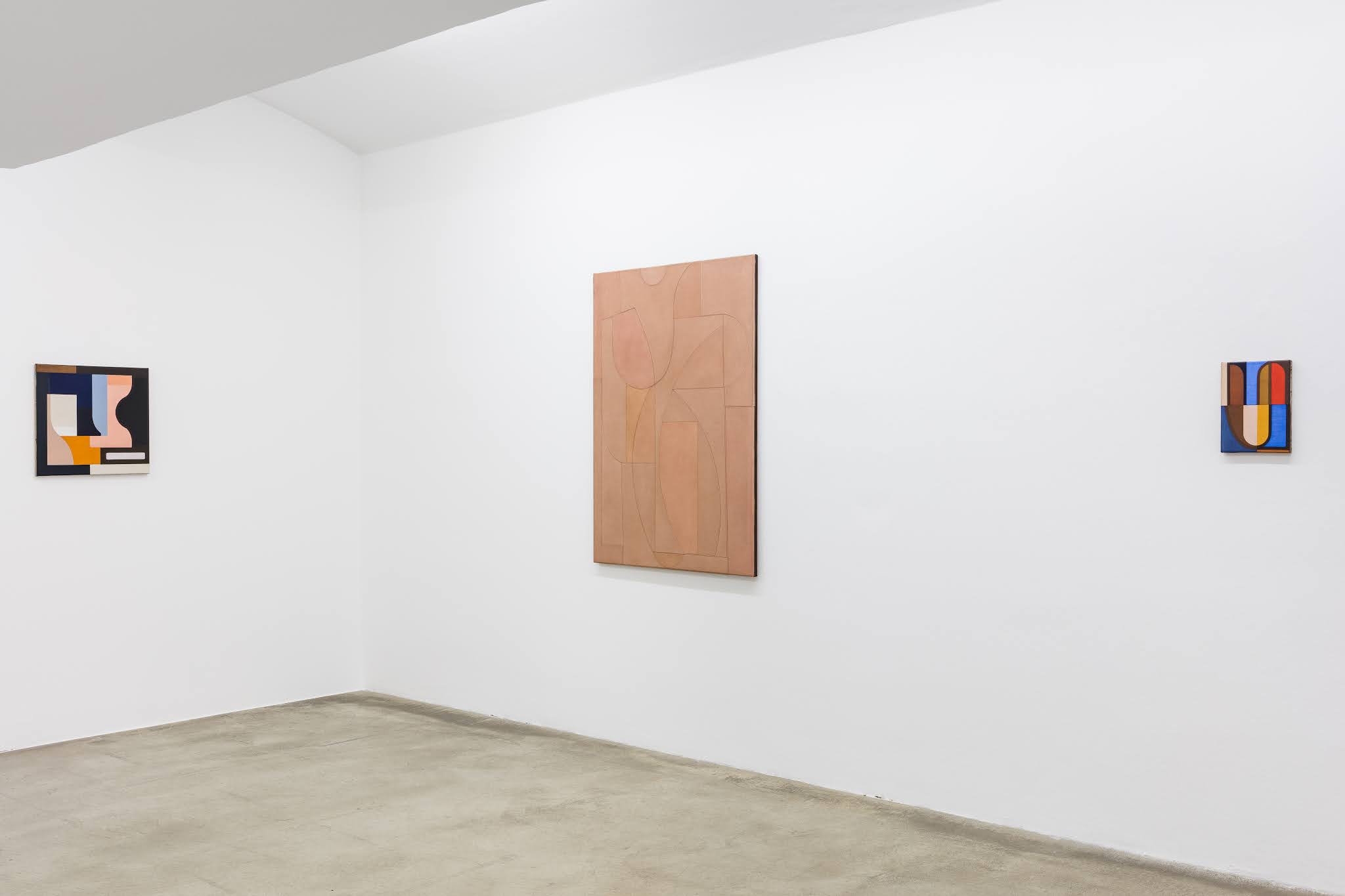 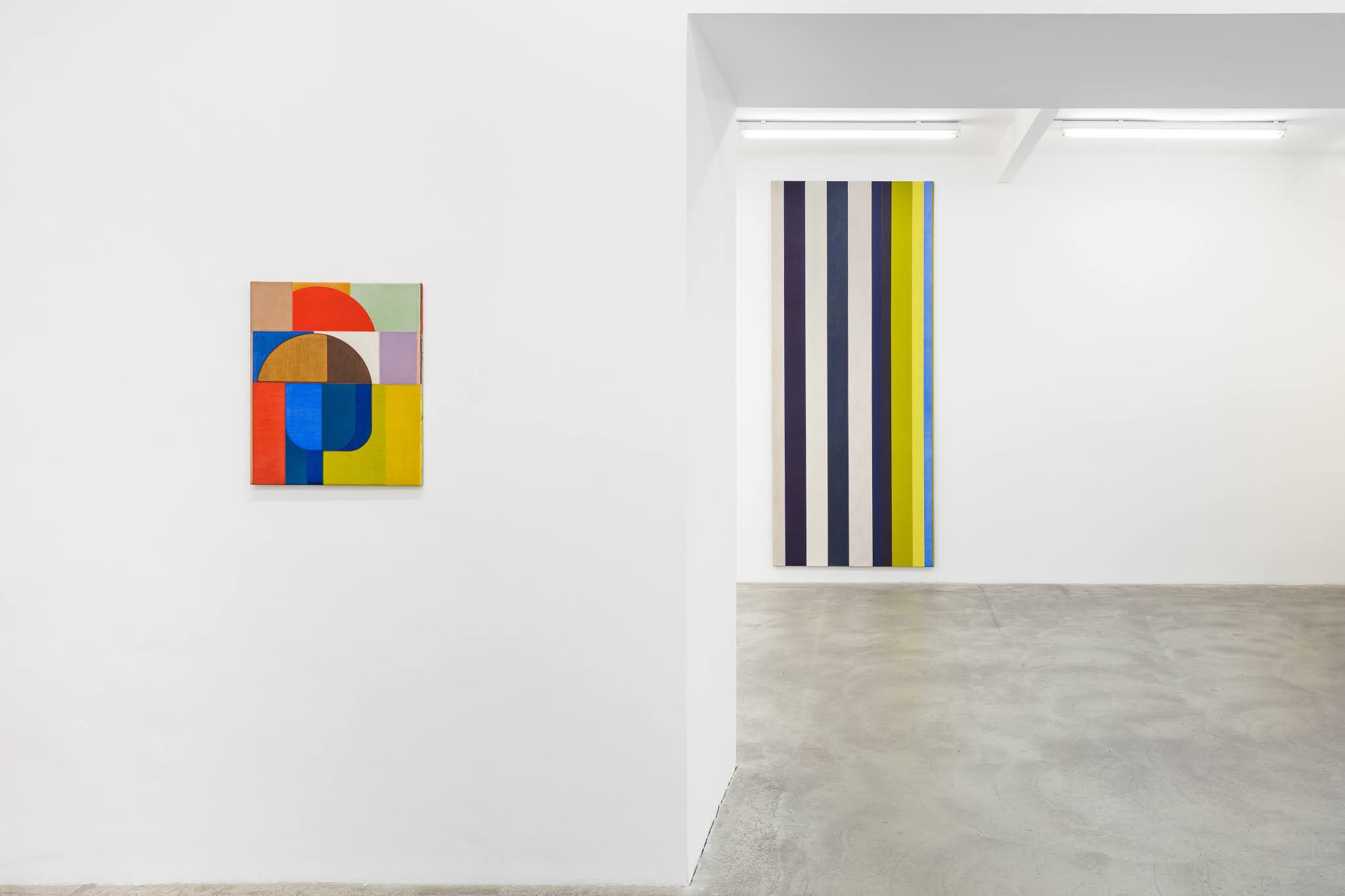 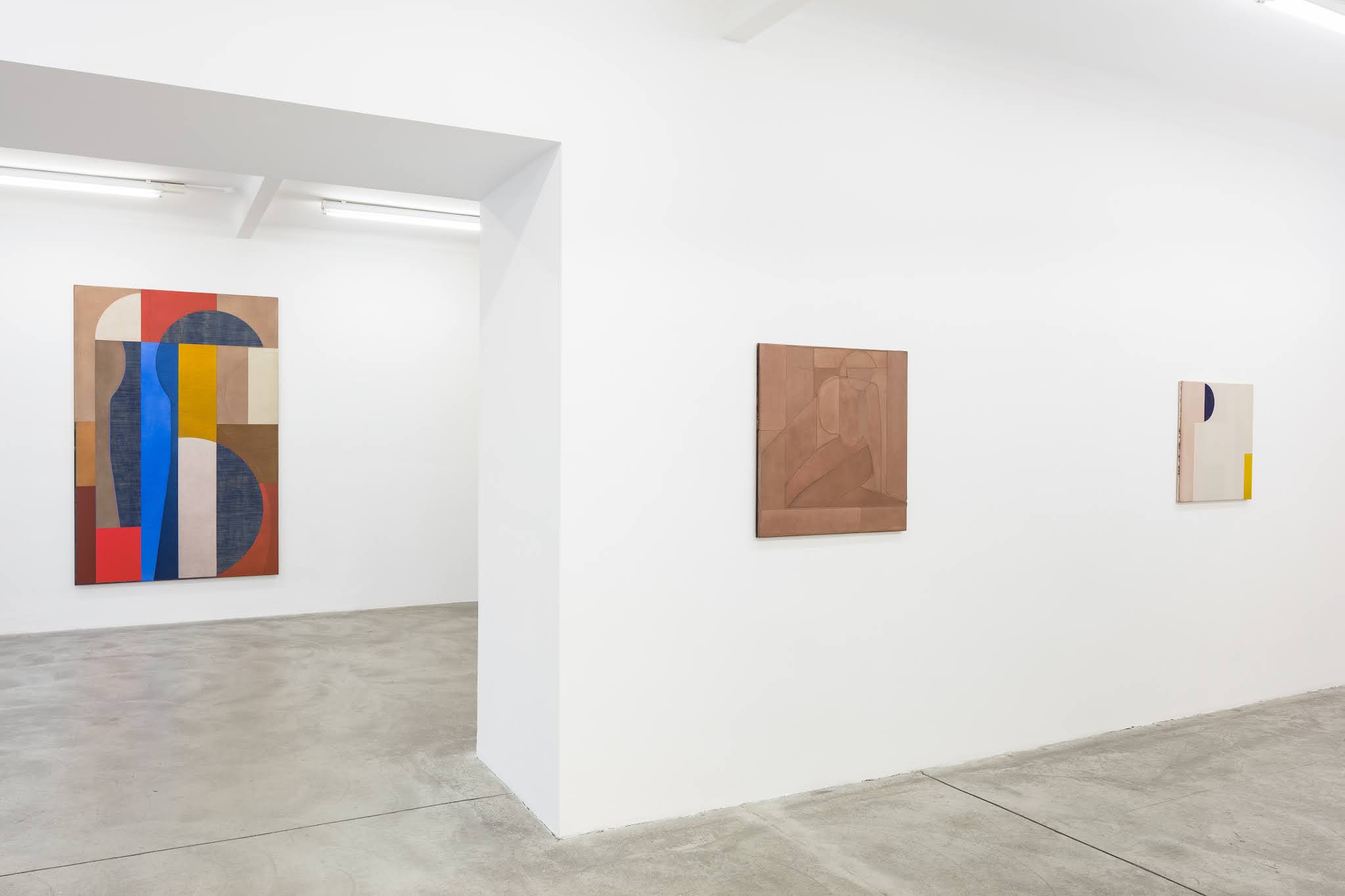 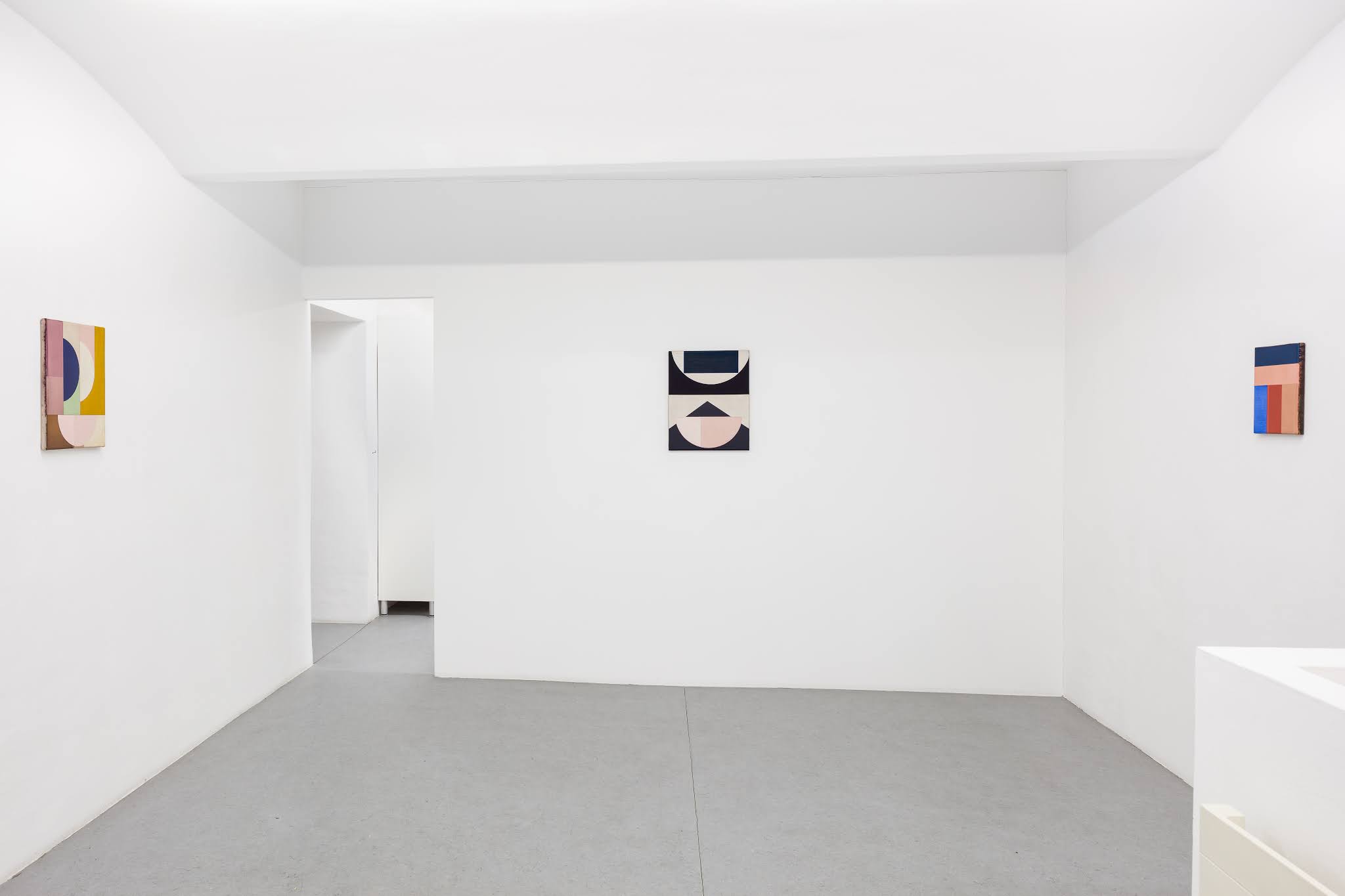 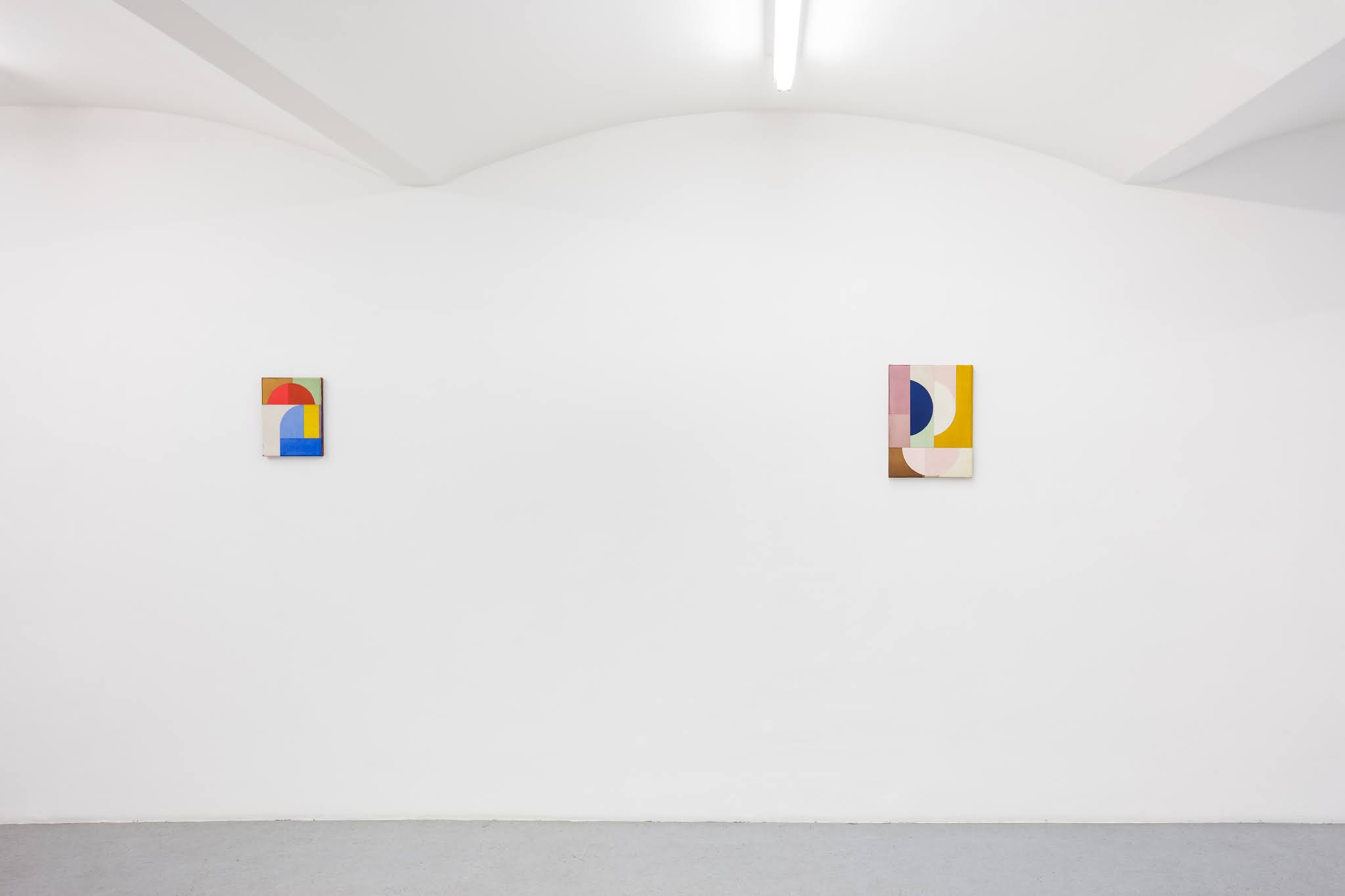 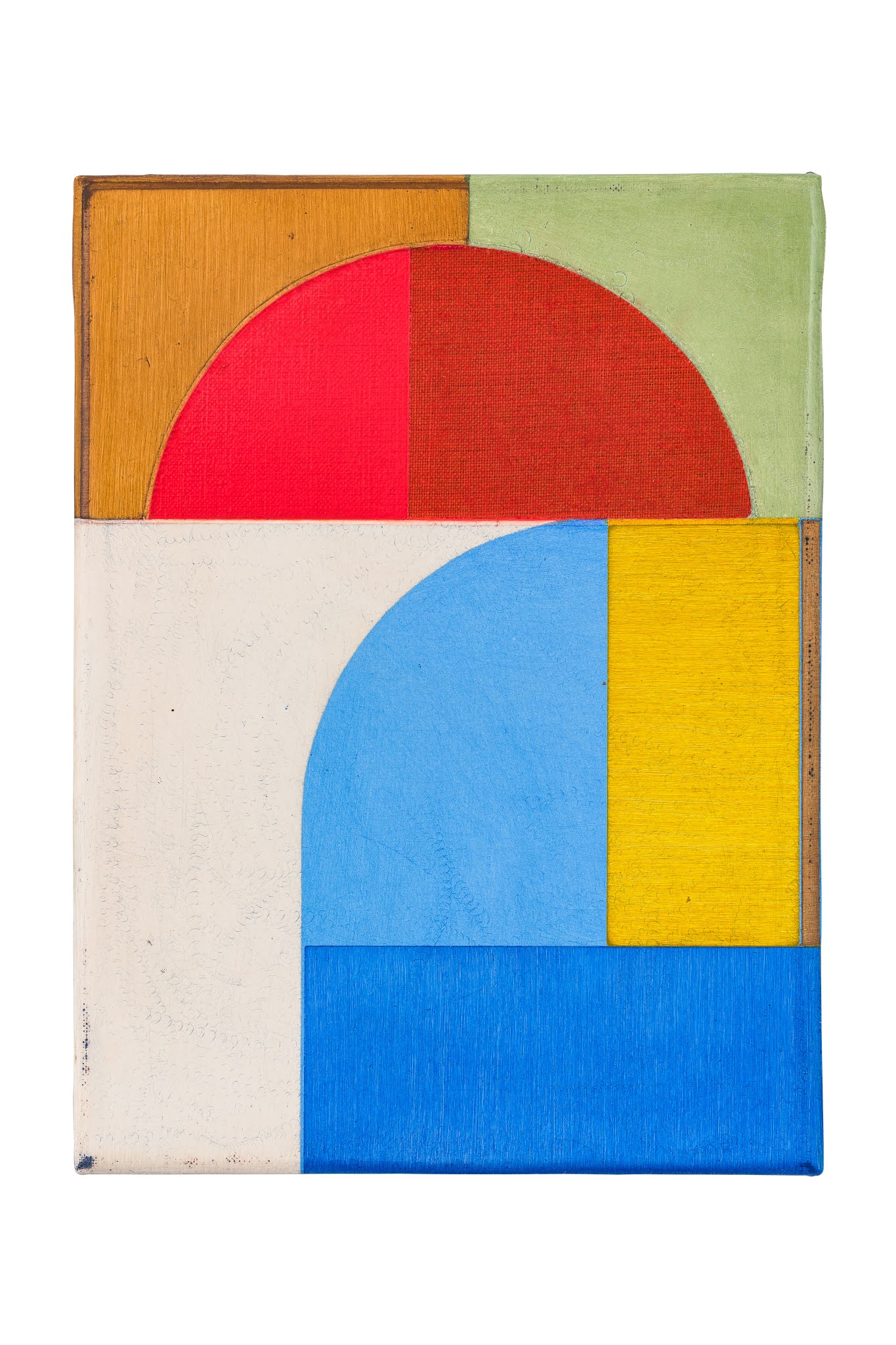 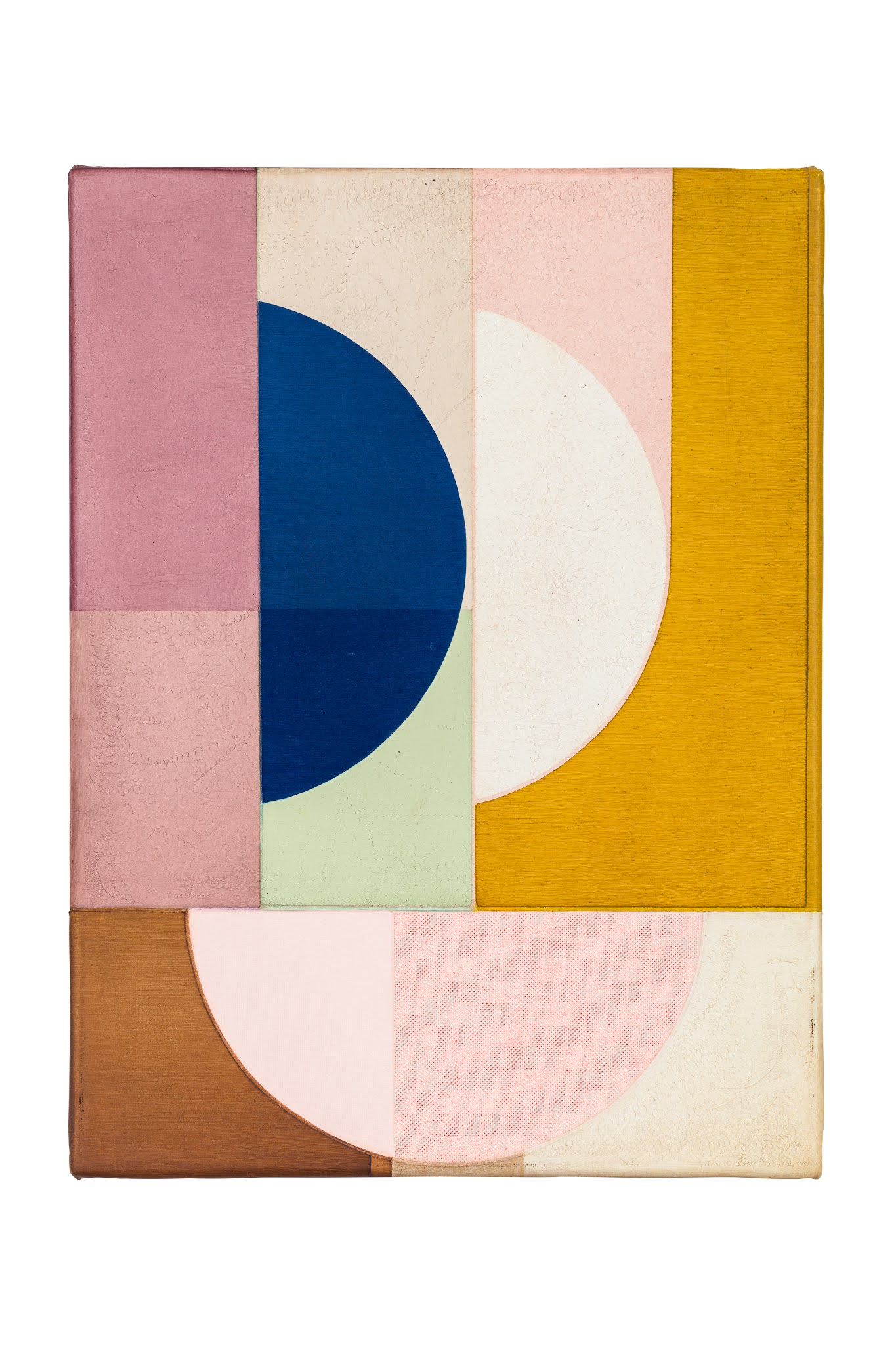 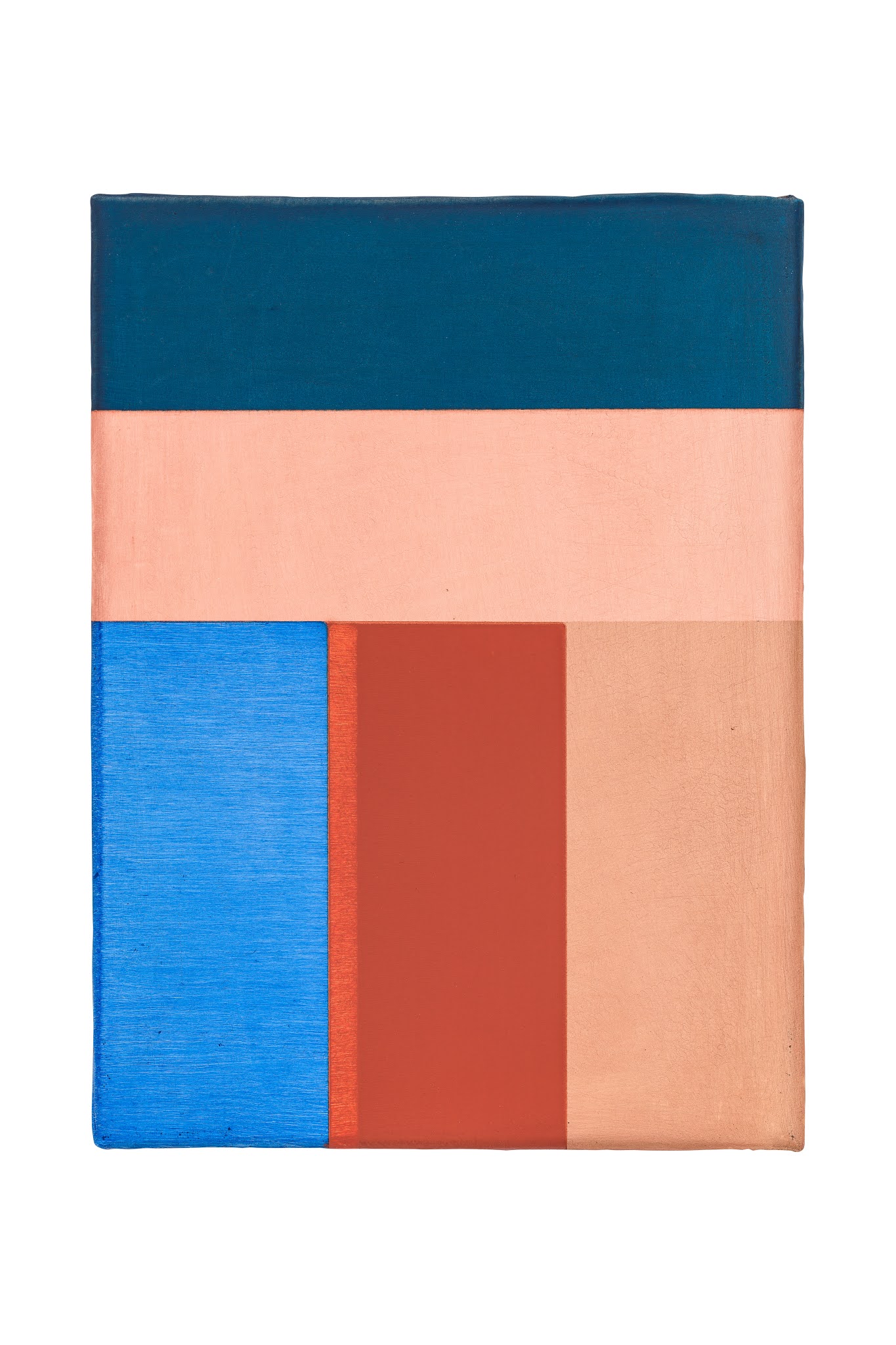 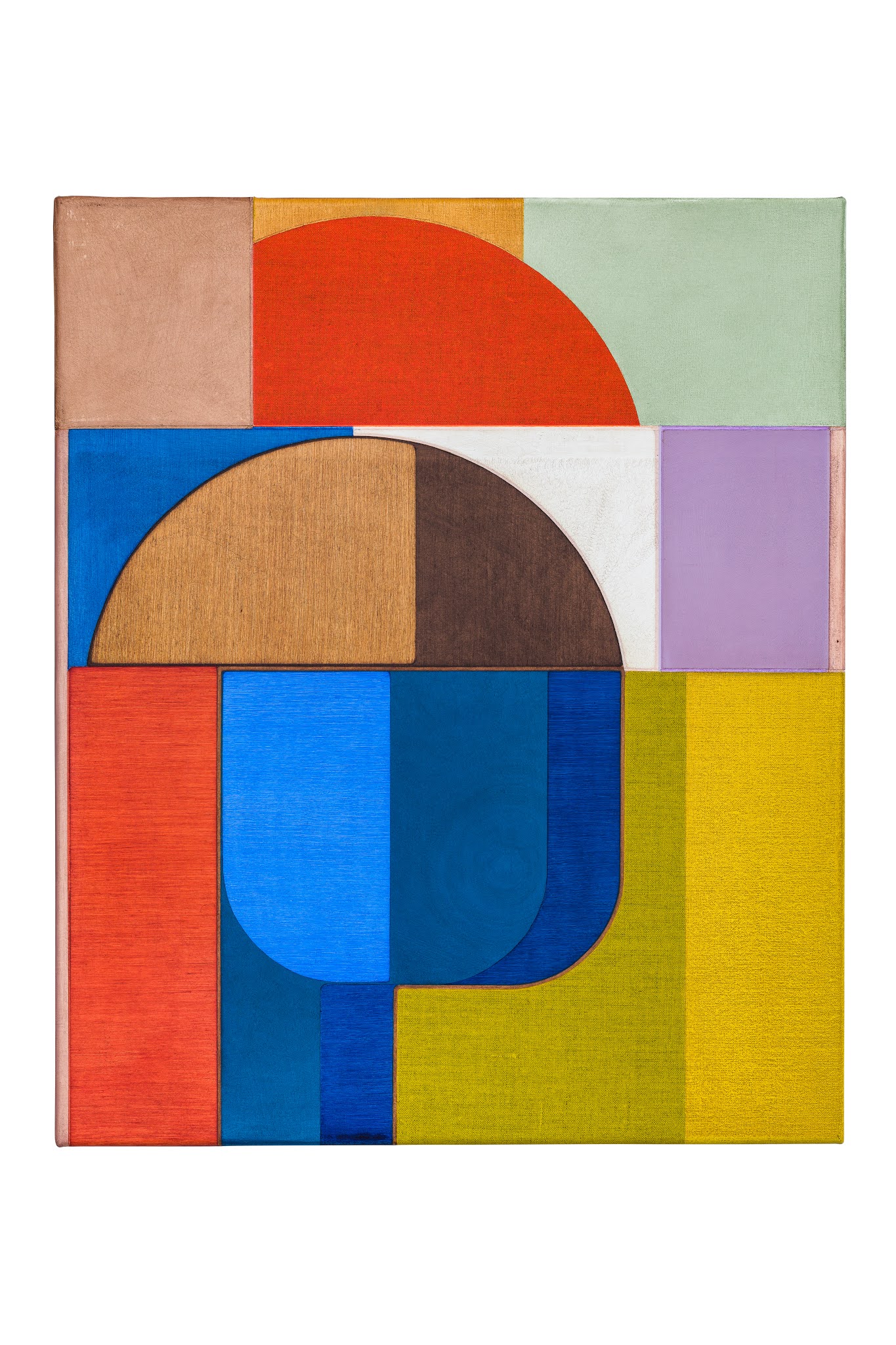 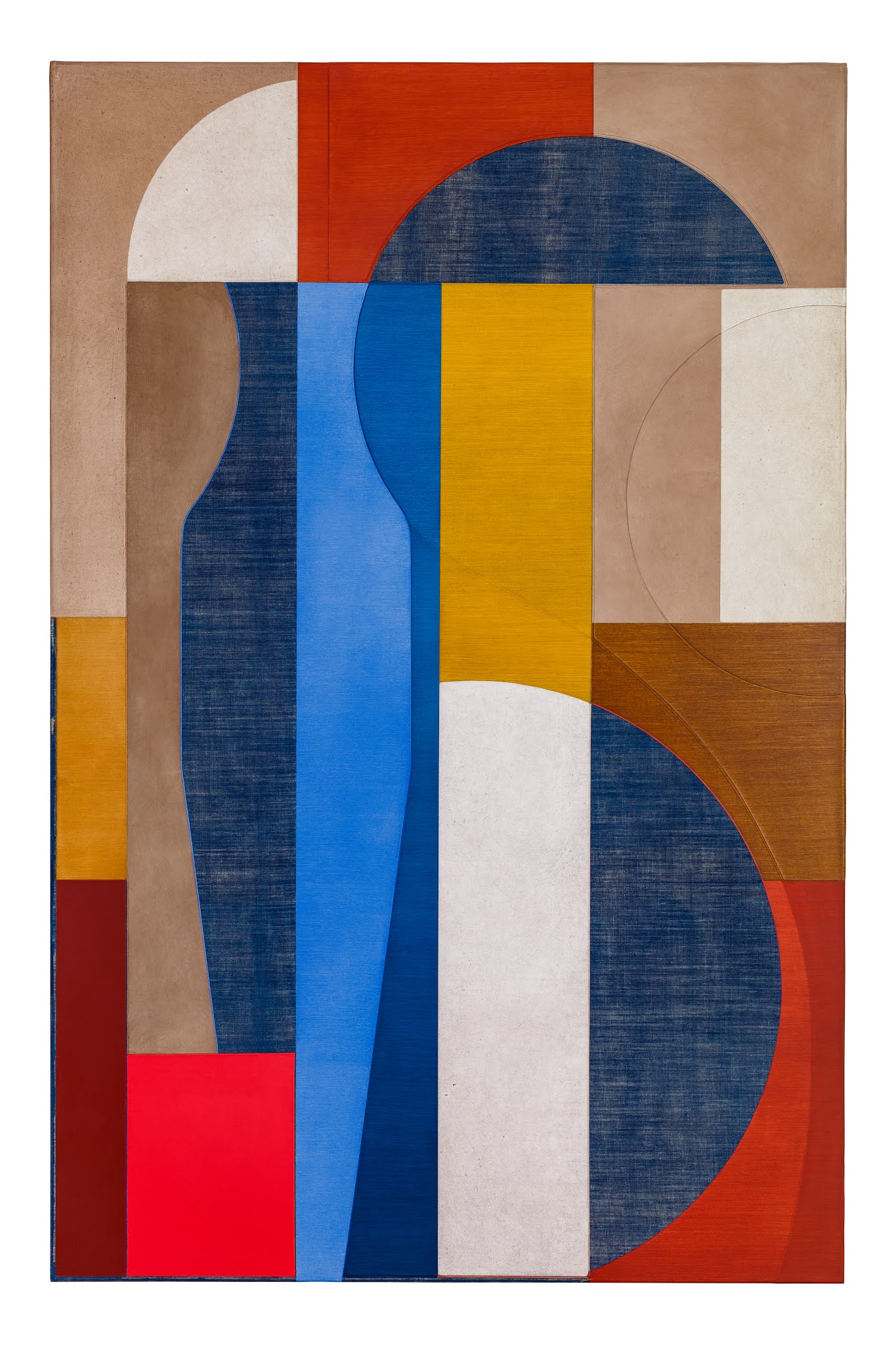 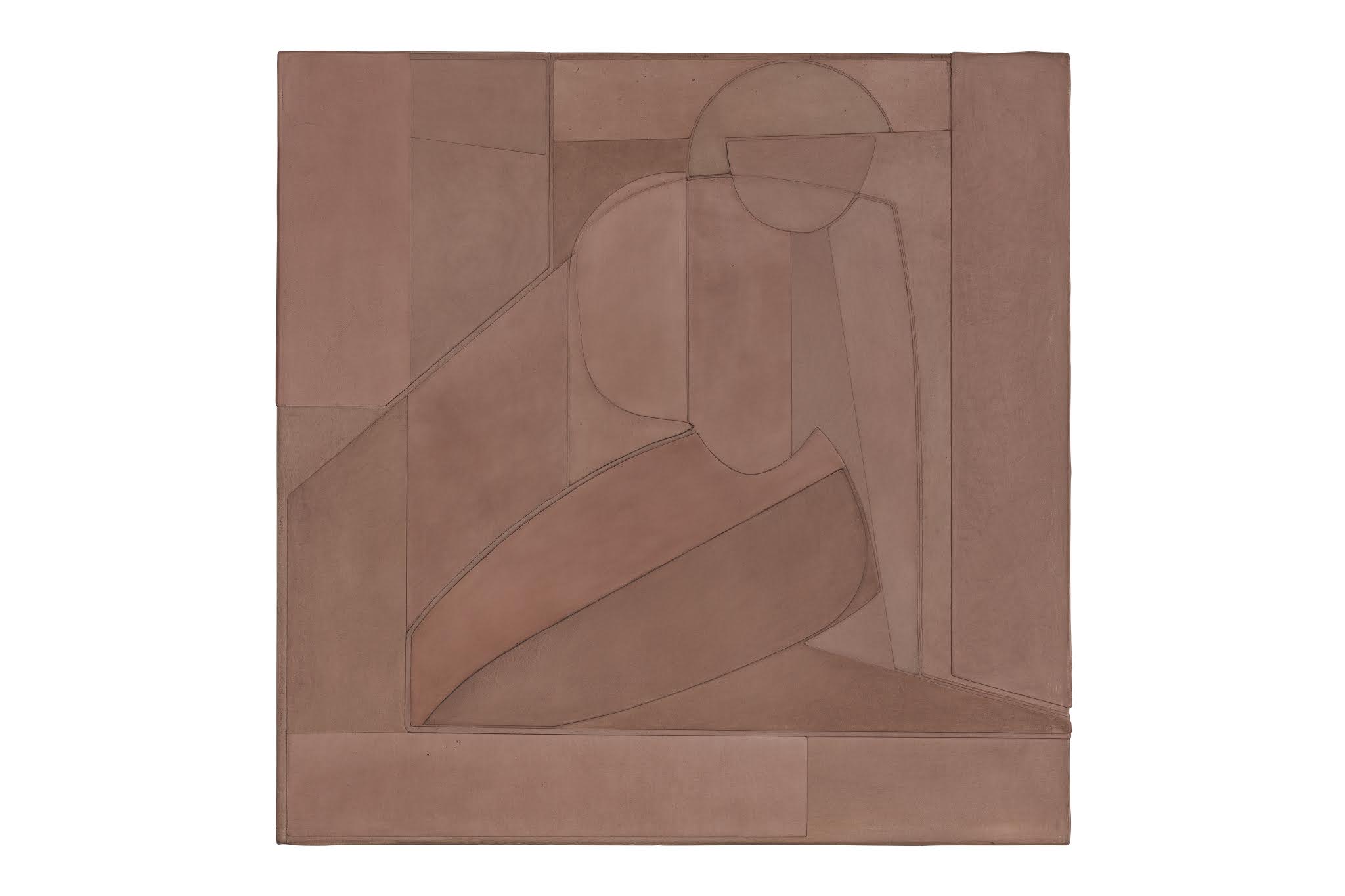 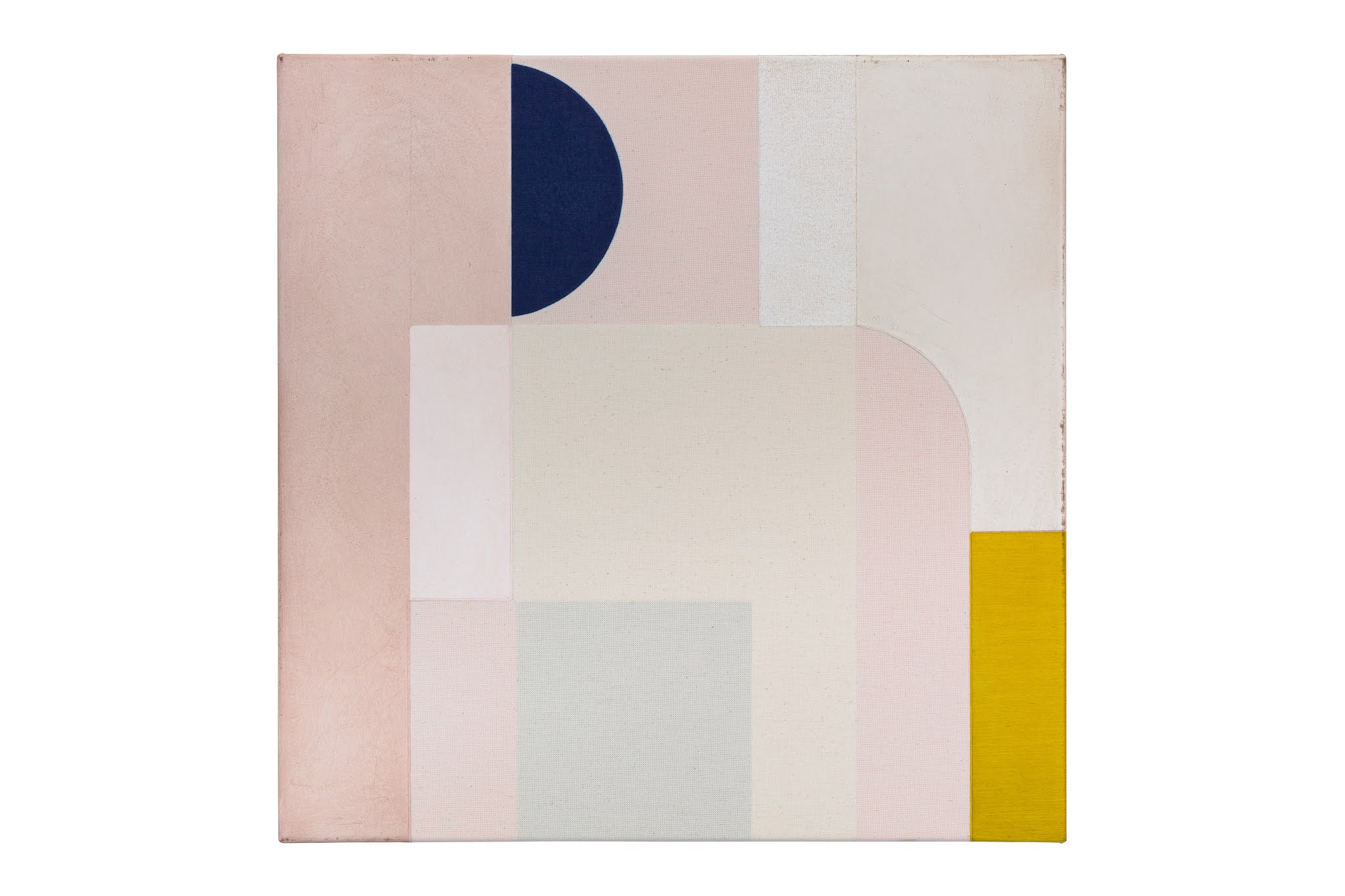 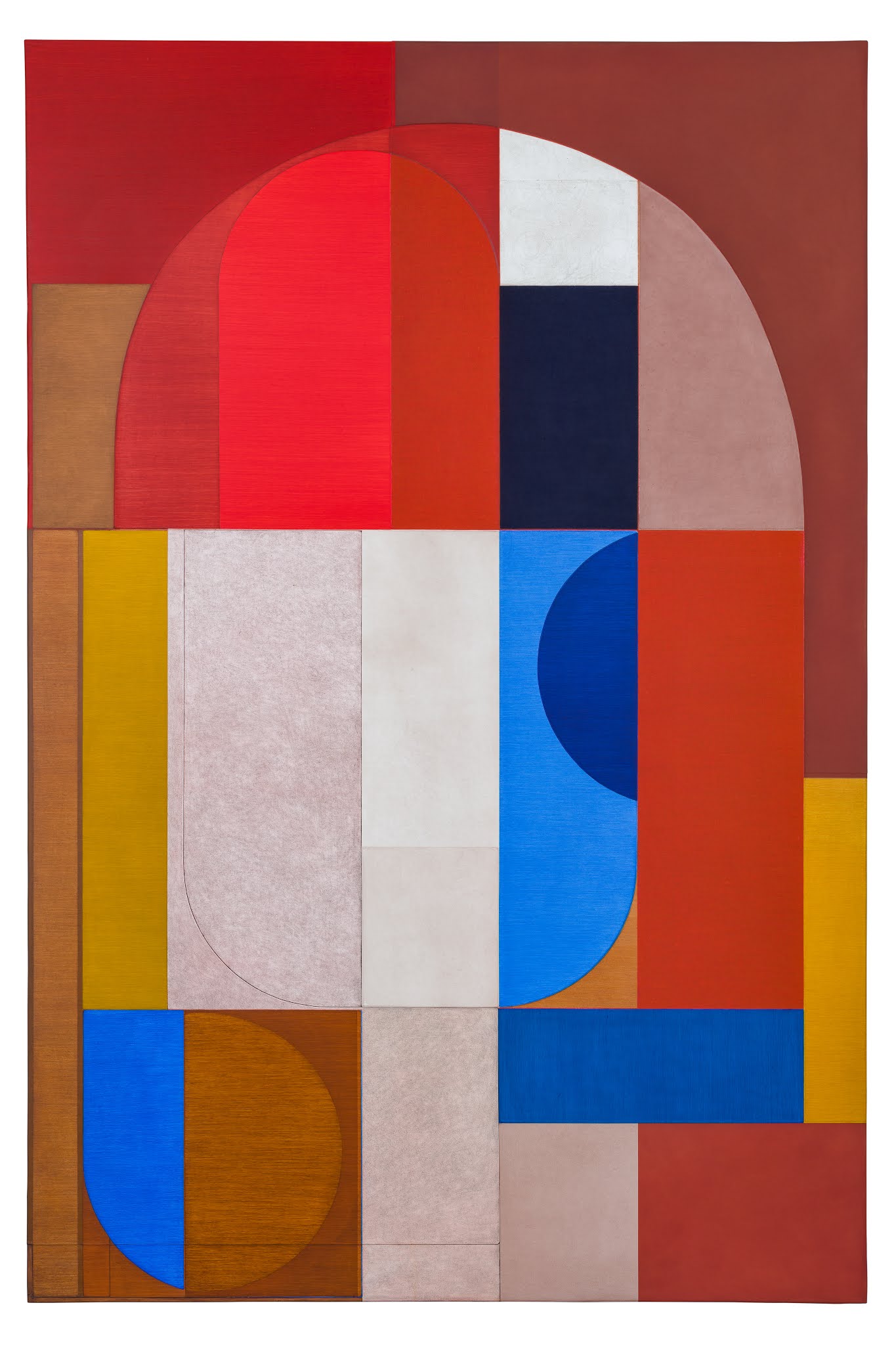 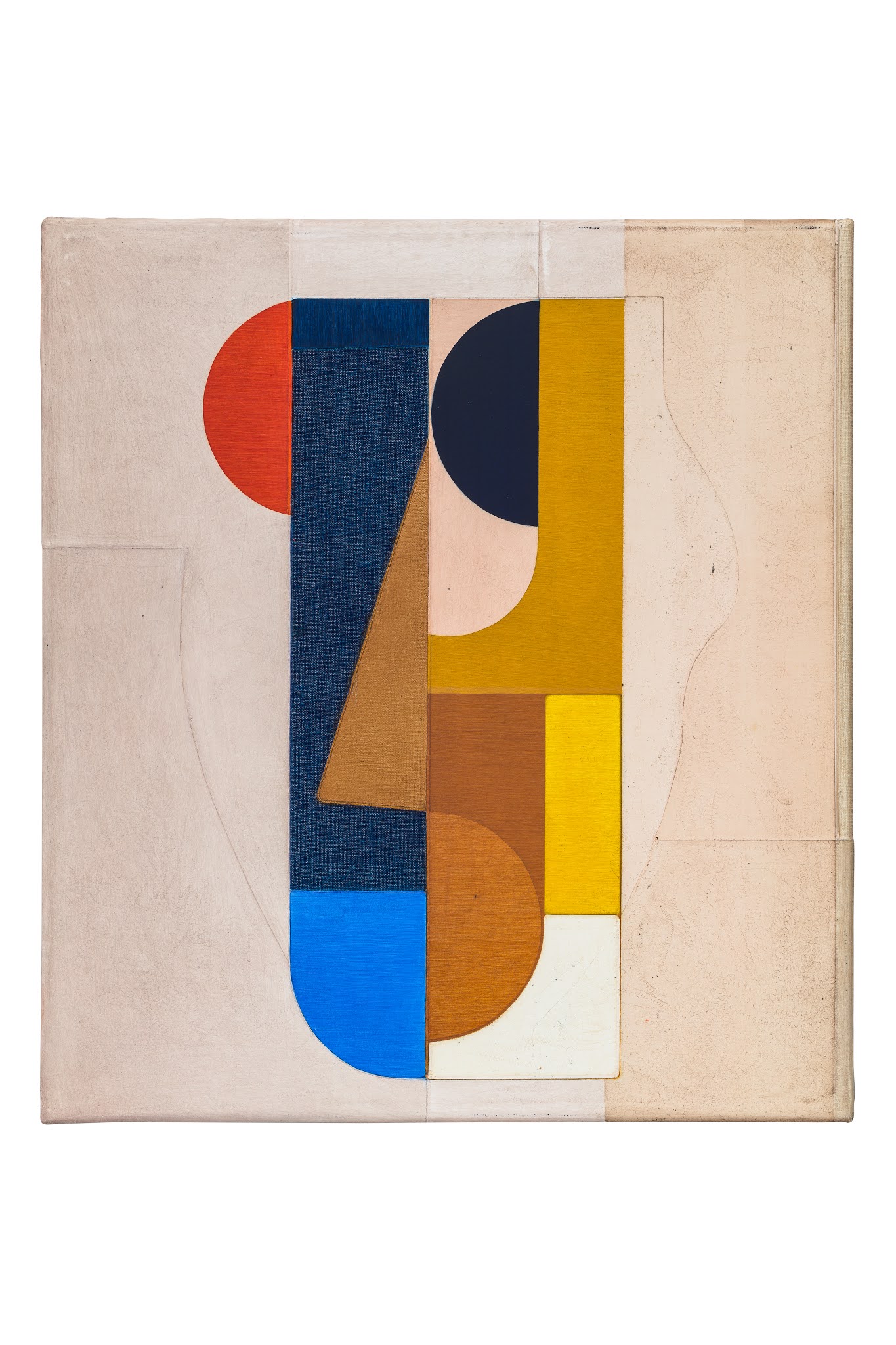 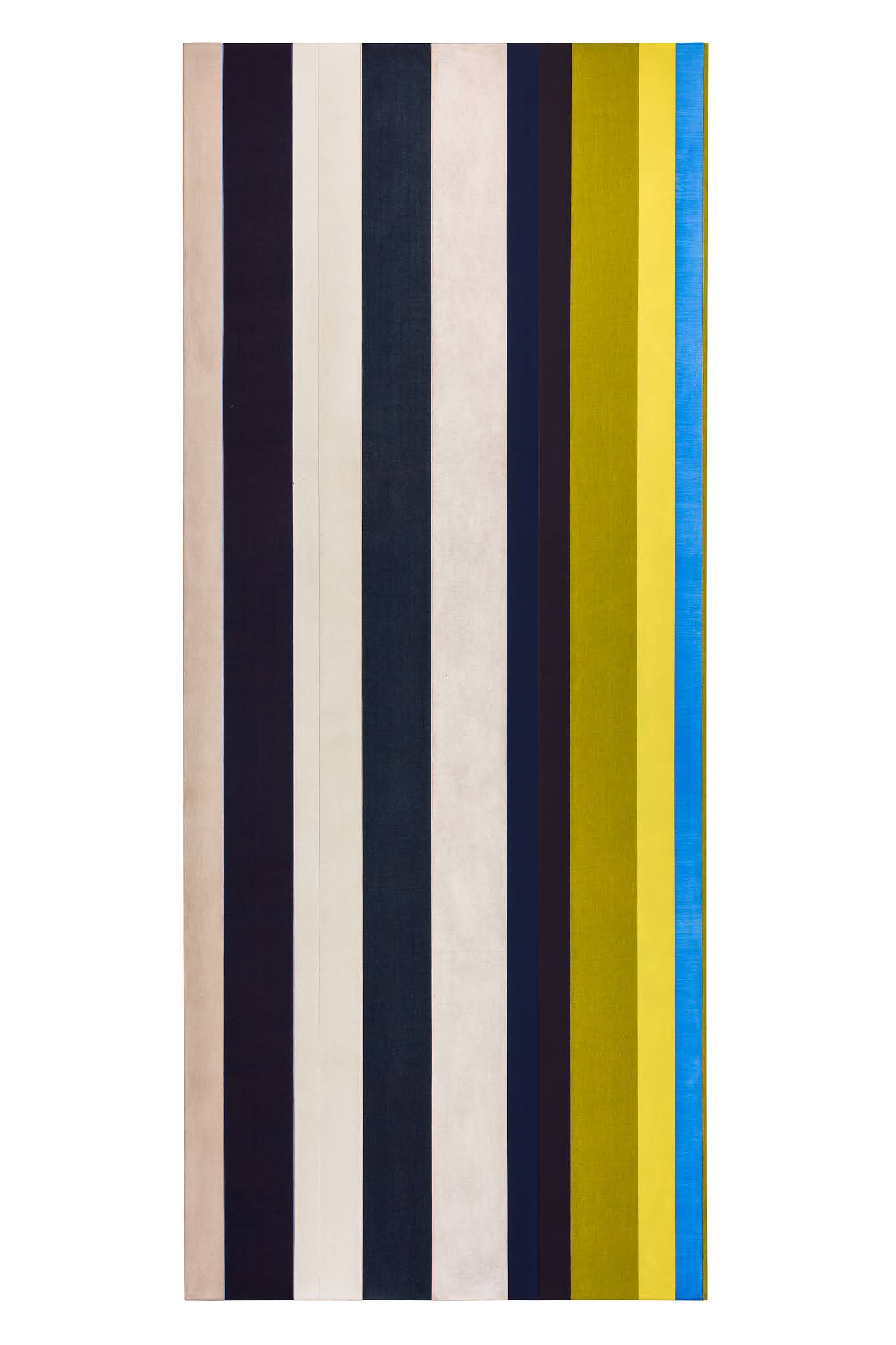 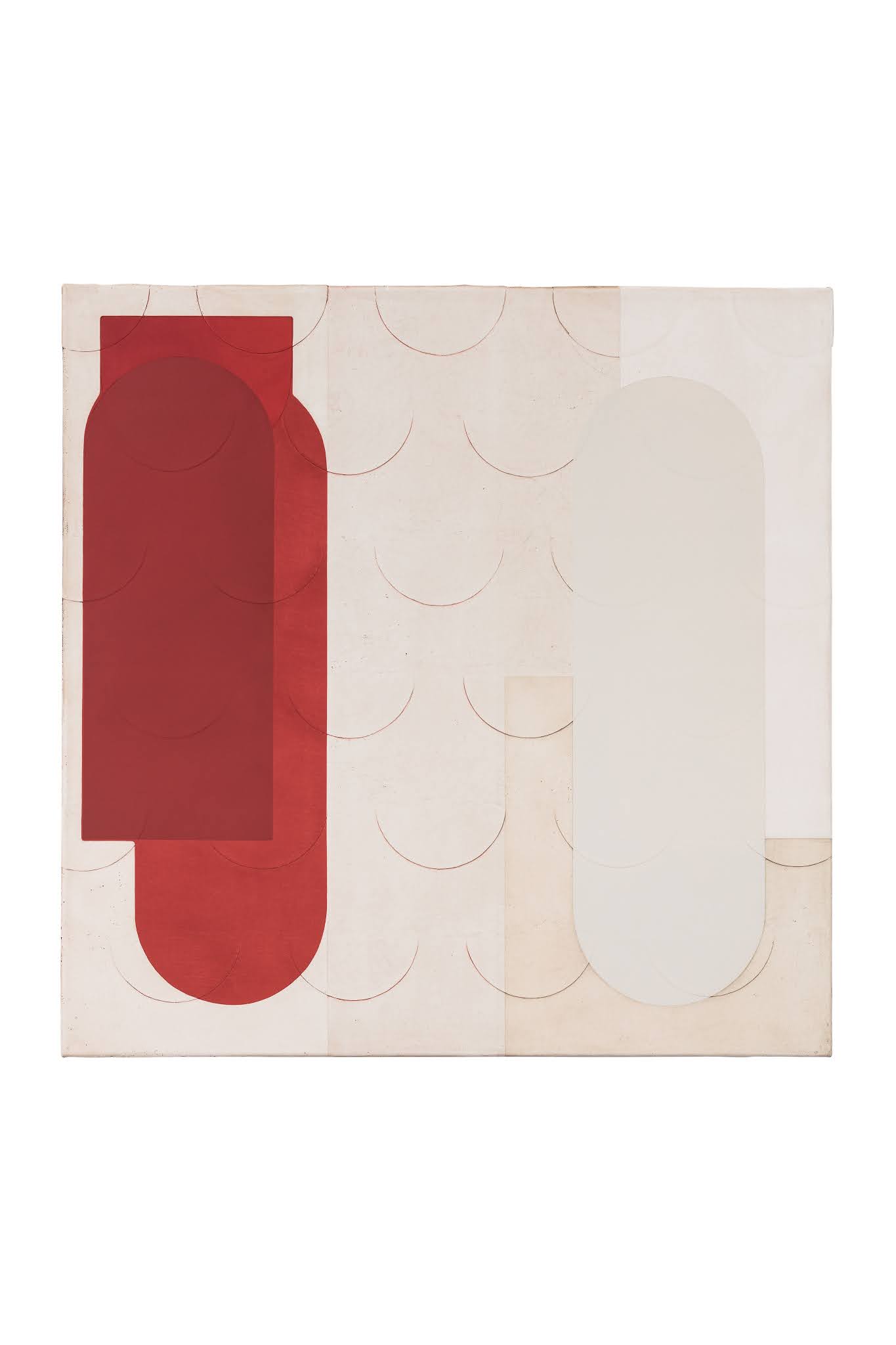 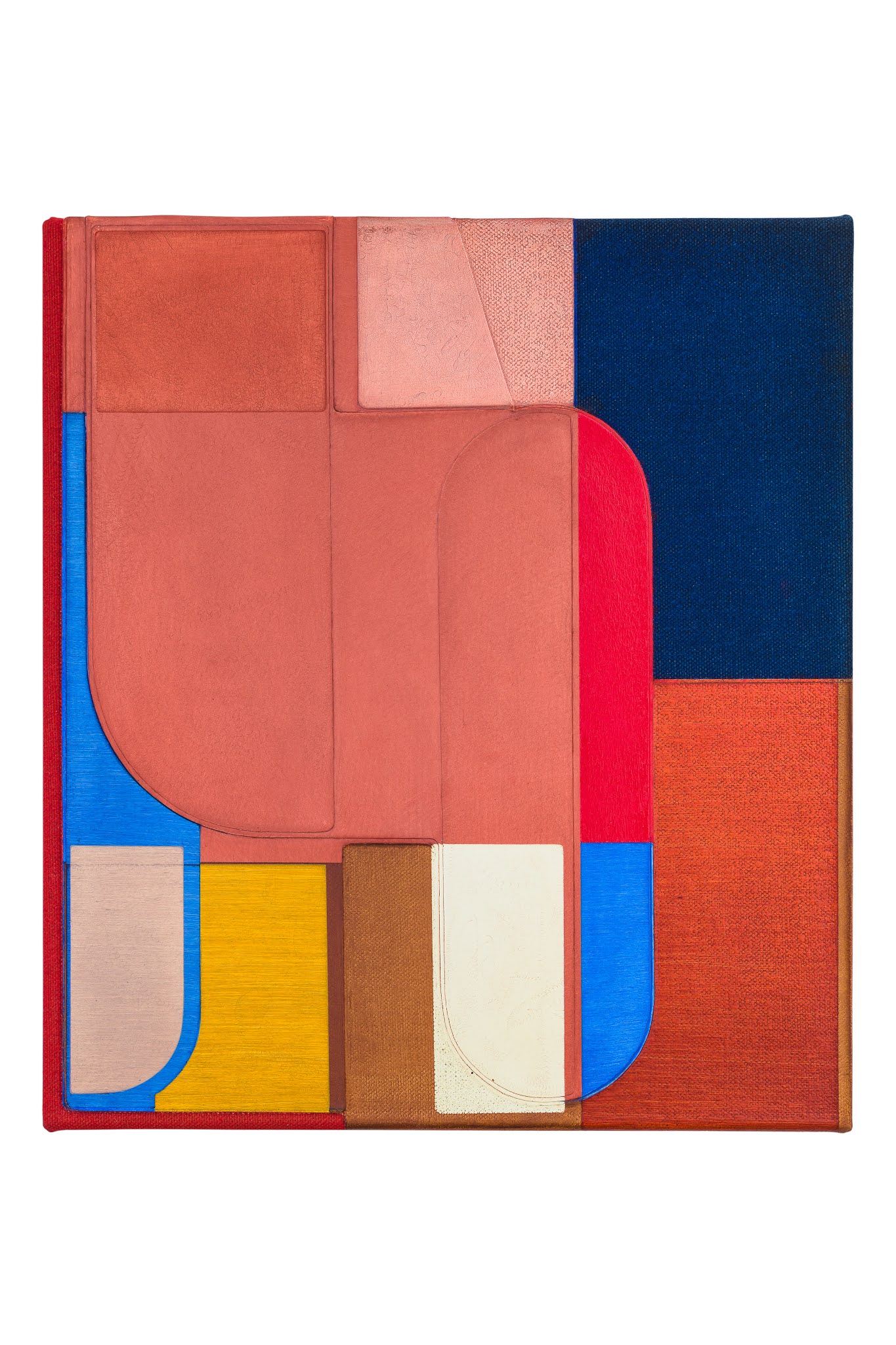 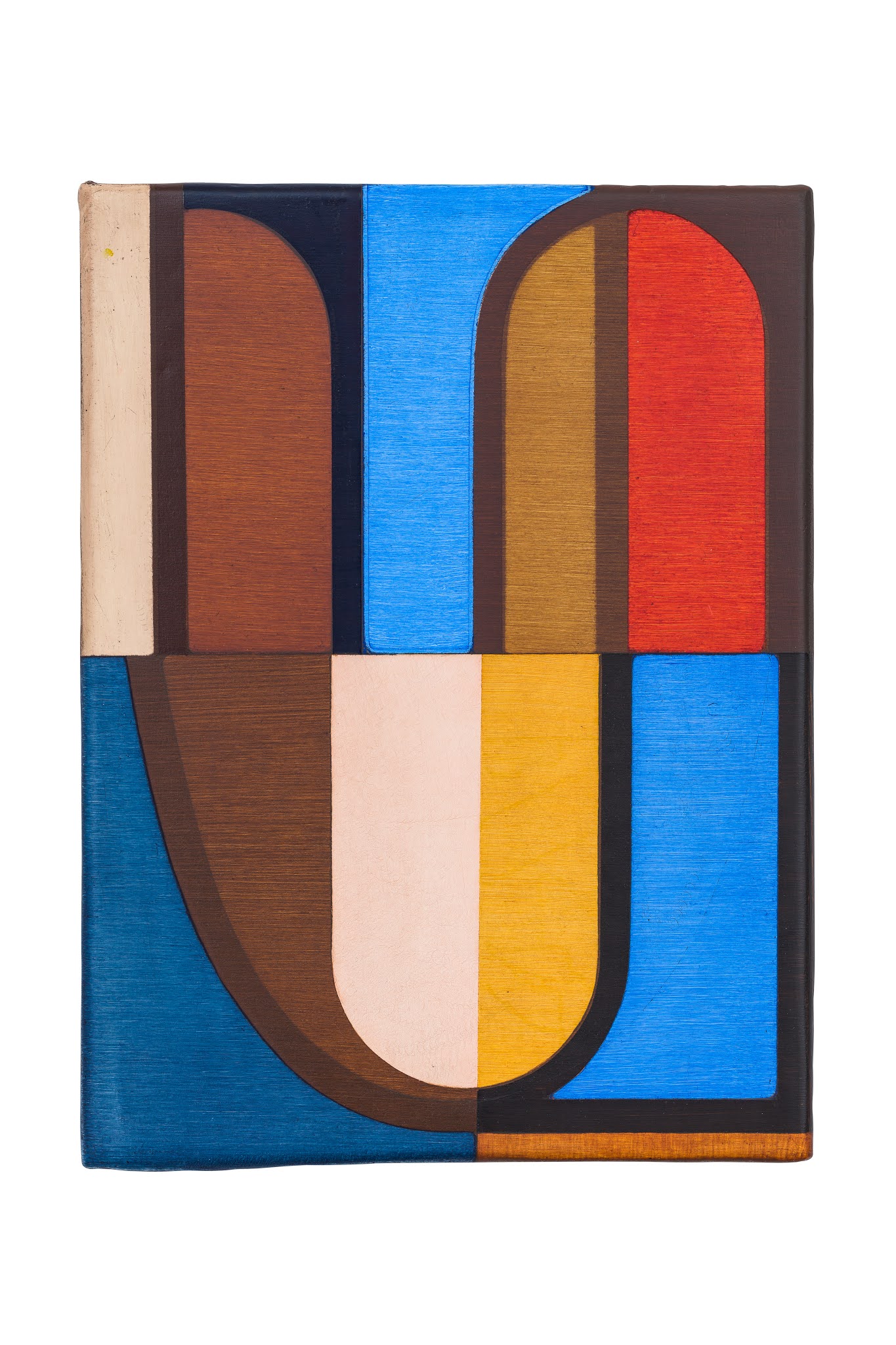 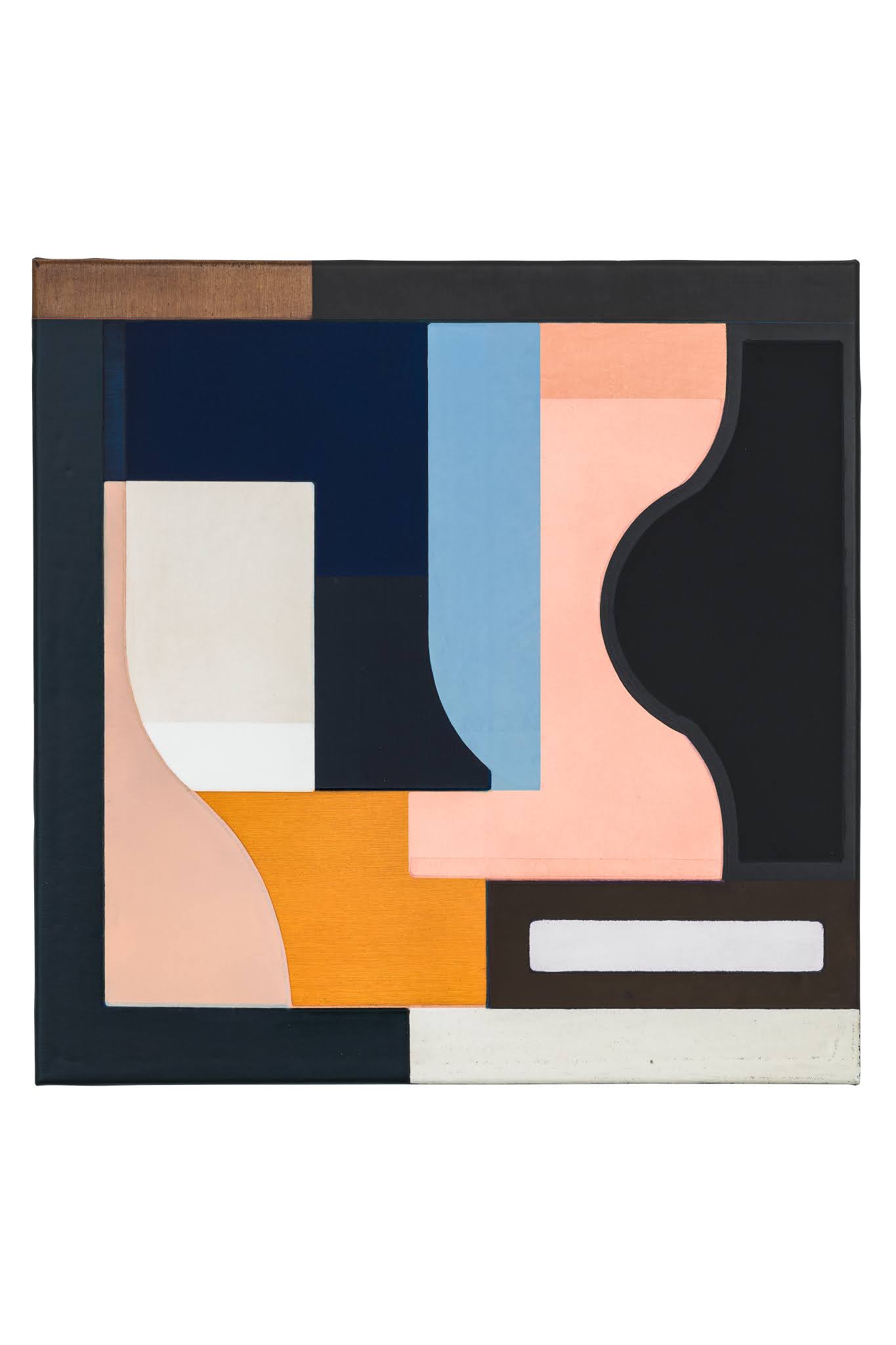 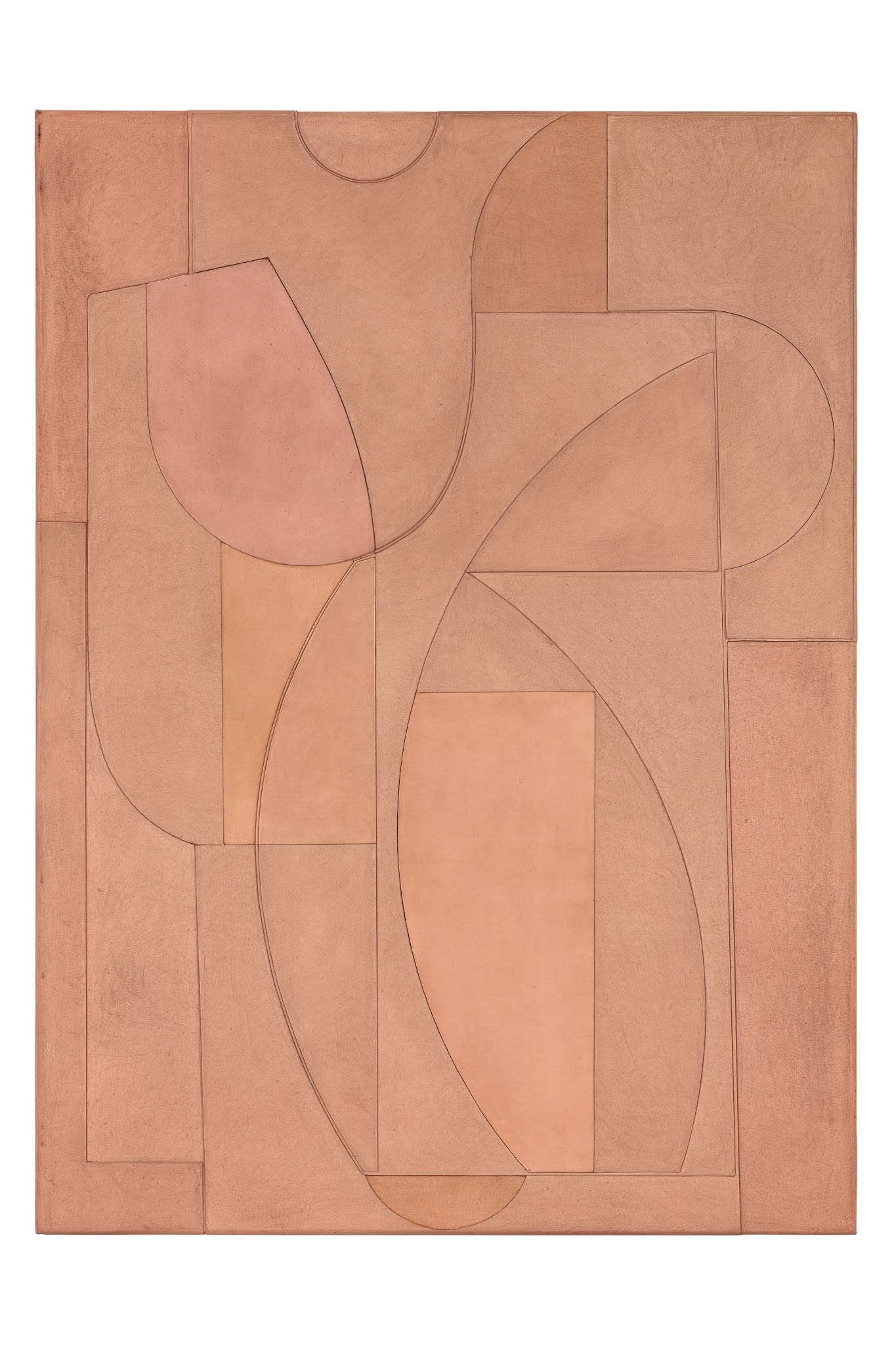 Worlds Beyond the Frame: On Svenja Deininger

Only in a purely physical sense do Svenja Deininger’s paintings end at their edges. Each of her canvases appears self-contained, yes, and tends to feature a degree of internal cohesion and refusal of the expressive, searching brushstroke which together suggest, implausibly, that all of these compositional elements arrived at exactly the same moment, fell cleanly from the sky. Yet move through one of Deininger’s exhibitions and you find, as it unfurls in real time, that her paintings are in animated dialogue with what is outside of them; that the display, a scenography orchestrated by the artist – to the degree that one can determine a viewer’s path – is a dynamic system whose parts continually inflect and, in the spirit of serious play, rewrite each other, undo each other.

Take one of the largest works in the present show, a colourful network of interlocking planes built on rectangles and curves, infilled in winy reds, bright singing blues, heavy yellows and a range of pallid tertiaries. The figure-ground relationship, if there is one, is hard to disentangle, but there’s a large arched form that contains a neat myriad of smaller rectangles, semicircles, bisected and inverted arches, etc, which due to the properties of colour seem to sit at different depths, making the apprehension of a totality trickier. The painting, taken on its own, is a ride for the eye that feels broadly non-representational. Experienced in conjunction with other works, though, it modulates, borrows their accents. A smaller, square painting veers rather closer to figuration, even though it speaks the same language as its larger cousin: here, a pair of semicircles in the upper half, a fairly central long triangle, and a semicircle below – the whole multicoloured arrangement centred within a field of off-whites – are strongly suggestive of a face, albeit one whose mood is beclouded. If, as Deininger has suggested, her shows are structured somewhat like a sentence, syntactically, then this might be a key noun, or verb, or – literally – modifier. You go back to the larger work and it’s different now: an entity, with the slippery beginnings of human features.

This process of disruption and revision continues. Cued by the ersatz physiognomy, we might start to see more echoes of the bodily in the various canvases’ curves and protrusions, to glimpse form against backdrop even where the paintings are nearly monochromatic. Longer looking, as ever, pays dividends, as the subtlety of Deininger’s harmonies asserts itself; further, you might note that each section of the painting is its own little world, distinct textures ranging from stains on the canvas verso that retain everything of the weave to heavily built up and sanded-down layers that are inhumanly smooth. At play here is a sense of one thing, one reality, constantly meeting another. It happens within the compacted drama of a few centimetres of painting, and it happens when you view Deininger’s practice as a whole.

Case in point: her art is suffused with nods to modernist abstraction, and to specific painters – this is part of their gaming – but it couldn’t be further from the principles of modernist autonomy, in which the real world did not intrude and each painting was a self-contained island. The figurative hints in the art let the world in; the cross-associations within Deininger’s exhibitions let other paintings in. This show, unusually for the artist, is built on primary colours – as if in self-challenge, the maker wondering how to harness their trumpeting loudness into subtlety – but it then counterpoints the red, yellow and blue with woozy tans, bleached pinks, watery creams; whatever we focus on, we can find its opposite nearby. At one point, having established these paintings’ approximate vocabulary, Deininger delivers a much taller painting built on stripes, which sits in the space like an oracle.

Indeed, juddering scale shifts are fundamental to the works’ effect per se, these leaps being themselves countermanded by other consistencies. Just when one is getting used to a stained-window colour aesthetic, the painter pivots into a mid-sized aria of browns which, for good measure, contains the exhibition’s closest veering towards a full-body figure. When you’ve gotten used to the idea that Deininger will never show you a brushstroke or even the evidence of her labour, you move to the side of a canvas and see all the previous layers, spilling over the edge, pointing to the occluded truth: that what might have appeared to be a composition worked up through drawing and then plotted coolly on canvas is in fact the deceptively unruffled endpoint of febrile improvisation; there was in fact no plan, and the painting emerged through a process as open-ended as that of an action painter; the canvas is a swan, kicking wildly and invisibly beneath the waterline.

The push-pull here is one of dynamics, it’s perpetual, and it is relatedly generous to the viewer. Multiple passes at the show operate similarly to multiple passes at one painting; what you thought was there isn’t, what you thought wasn’t there is, and were these paintings arranged in a different sequence, they would resonate anew. (A joke about writing: the writer has all the words, they just have to put them in the right order.)  Deininger’s work, here, is a demonstration of the contingency of meaning in the visual arts, but to say so is to go against the spirit of her work. To say so would complete the art, encode it, end it, whereas the experience of looking, here, is precisely the opposite: these paintings, you suspect, will go on talking to each other even after you leave.