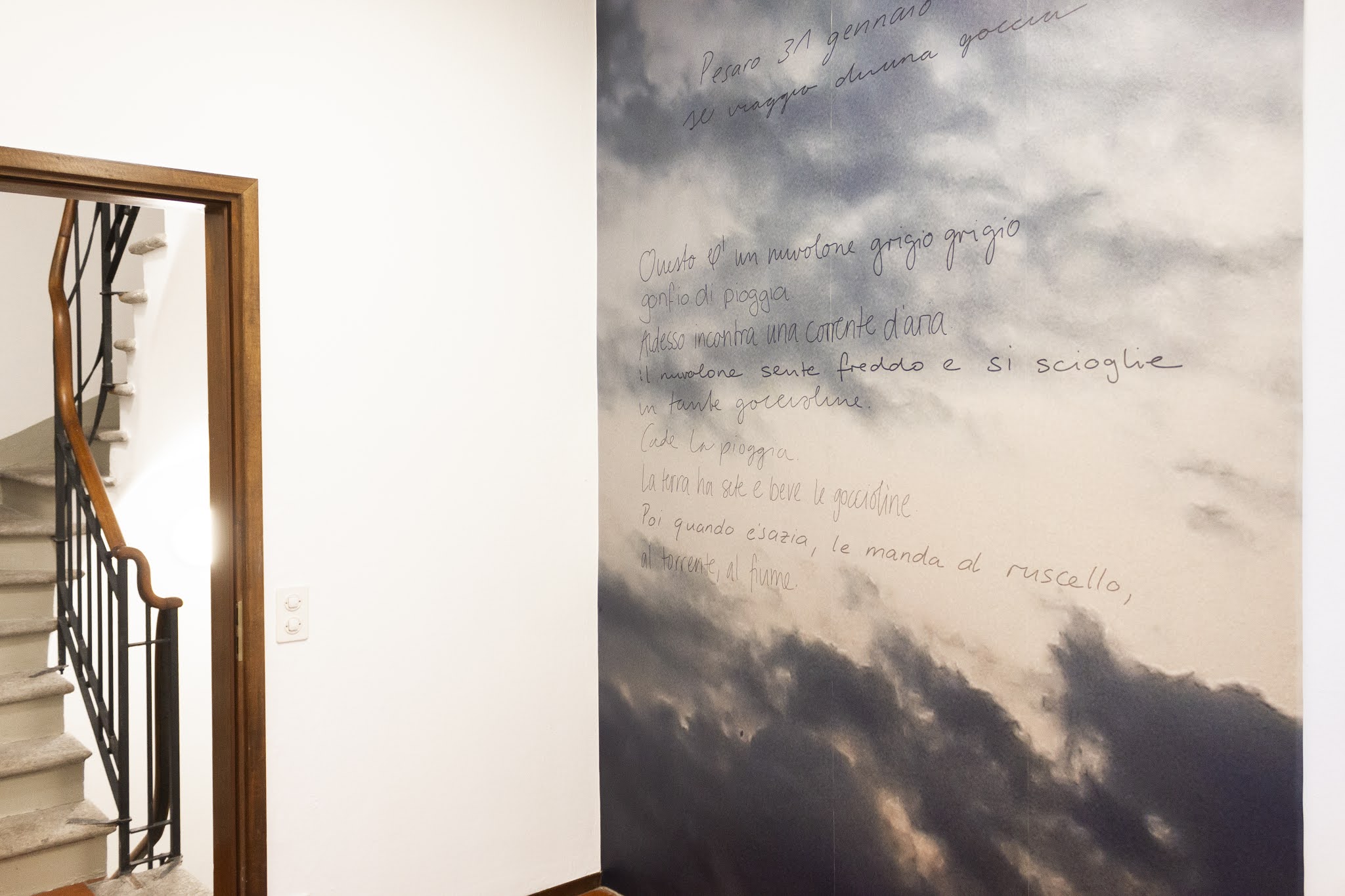 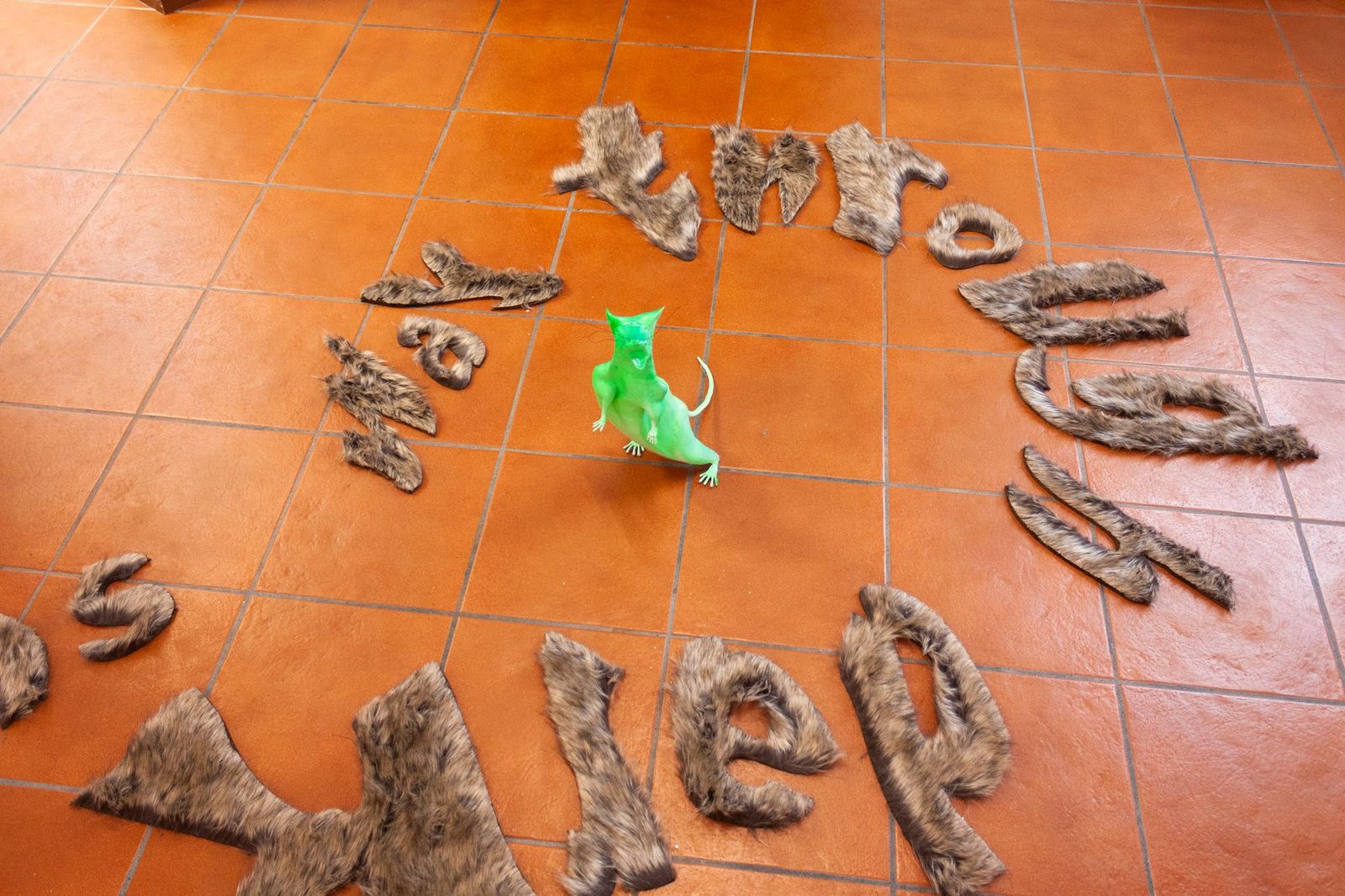 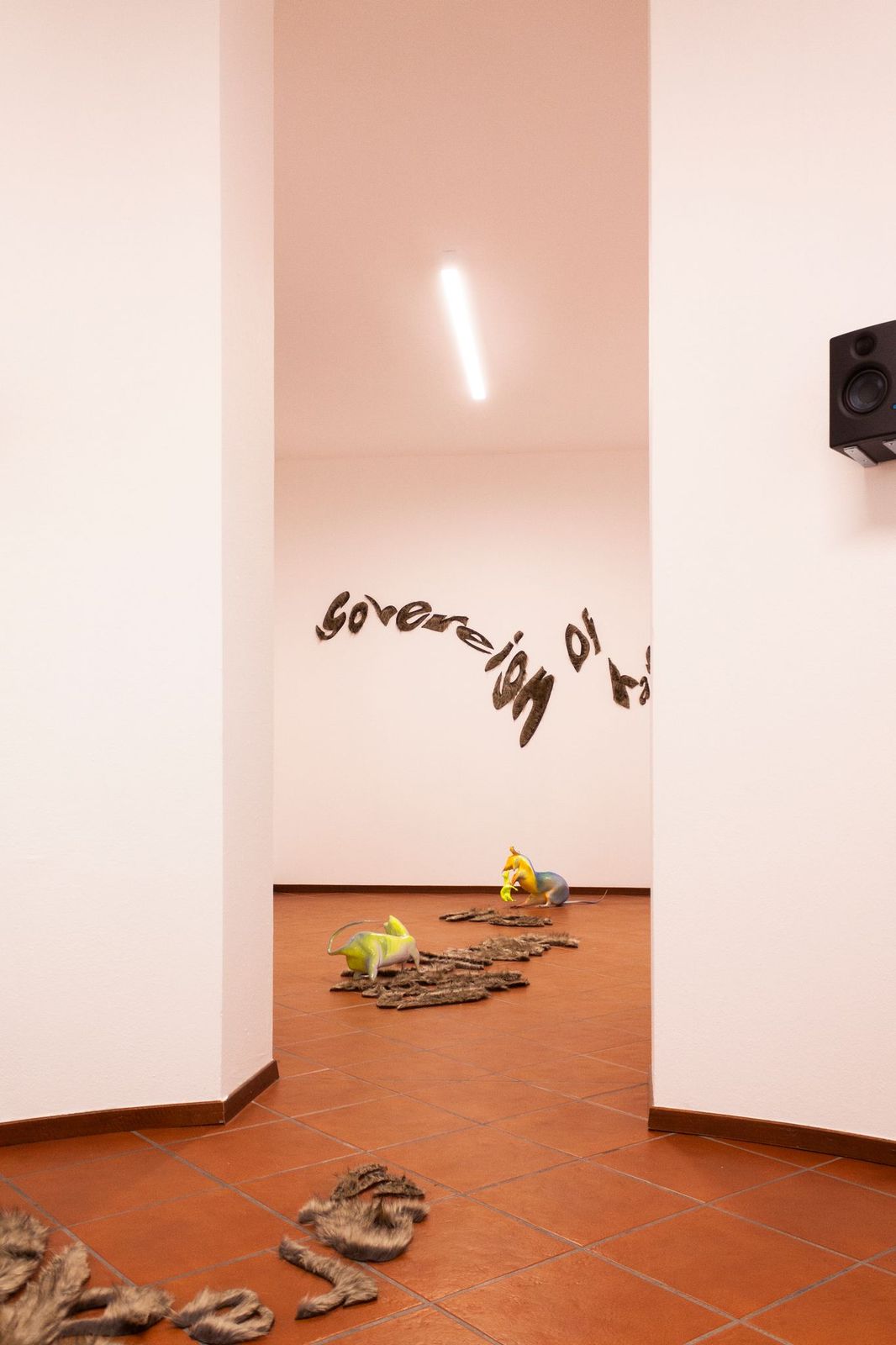 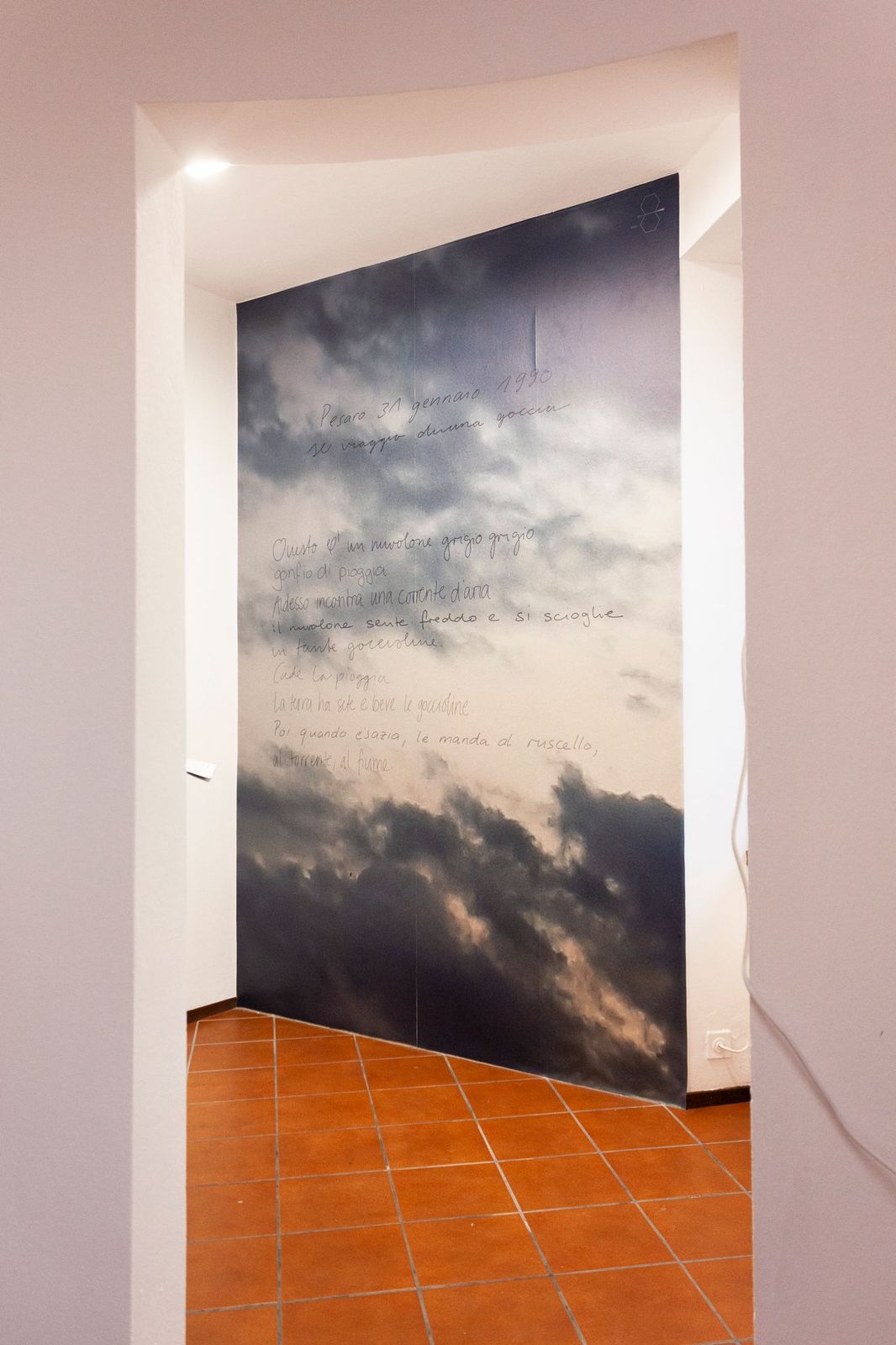 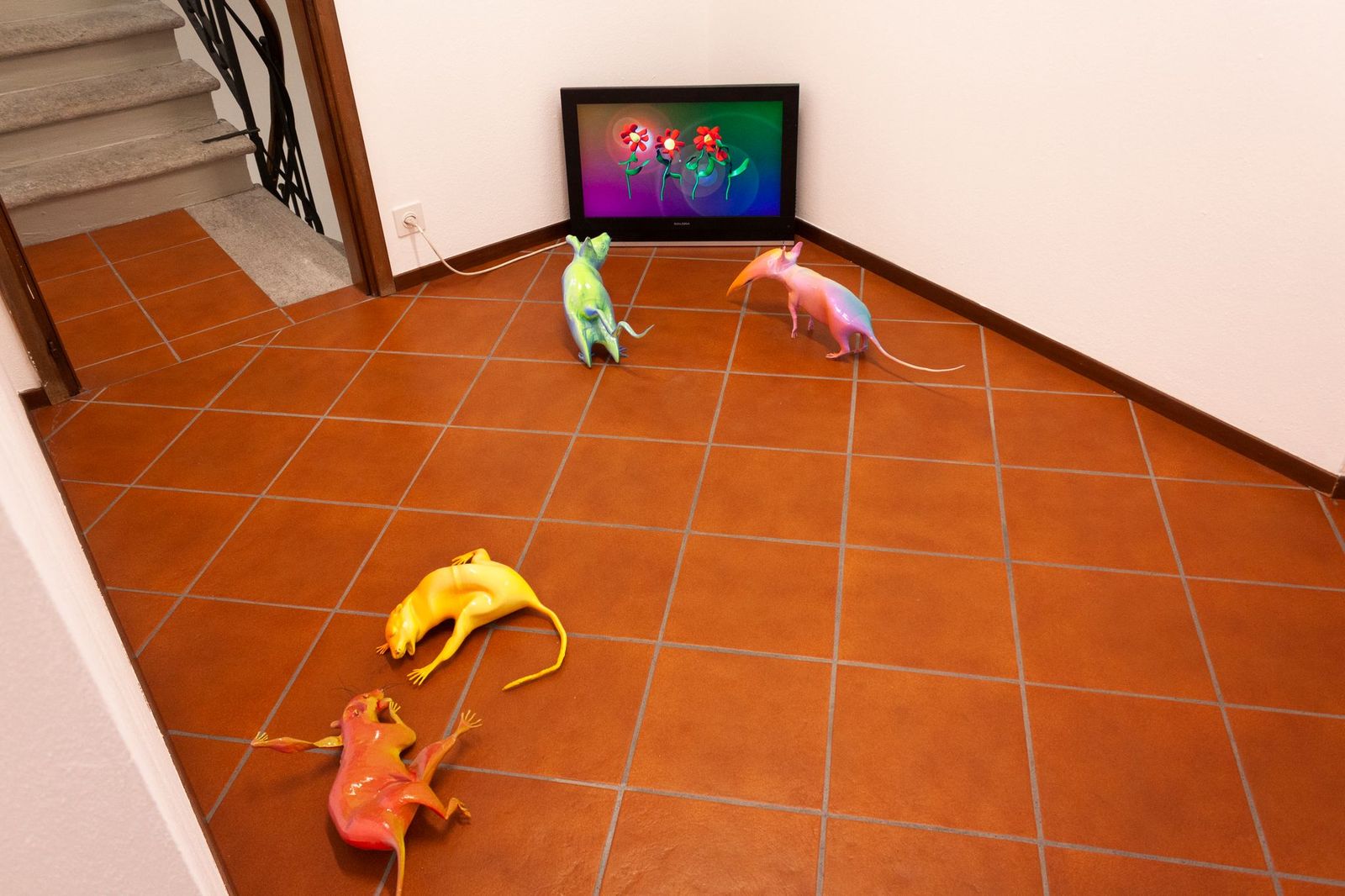 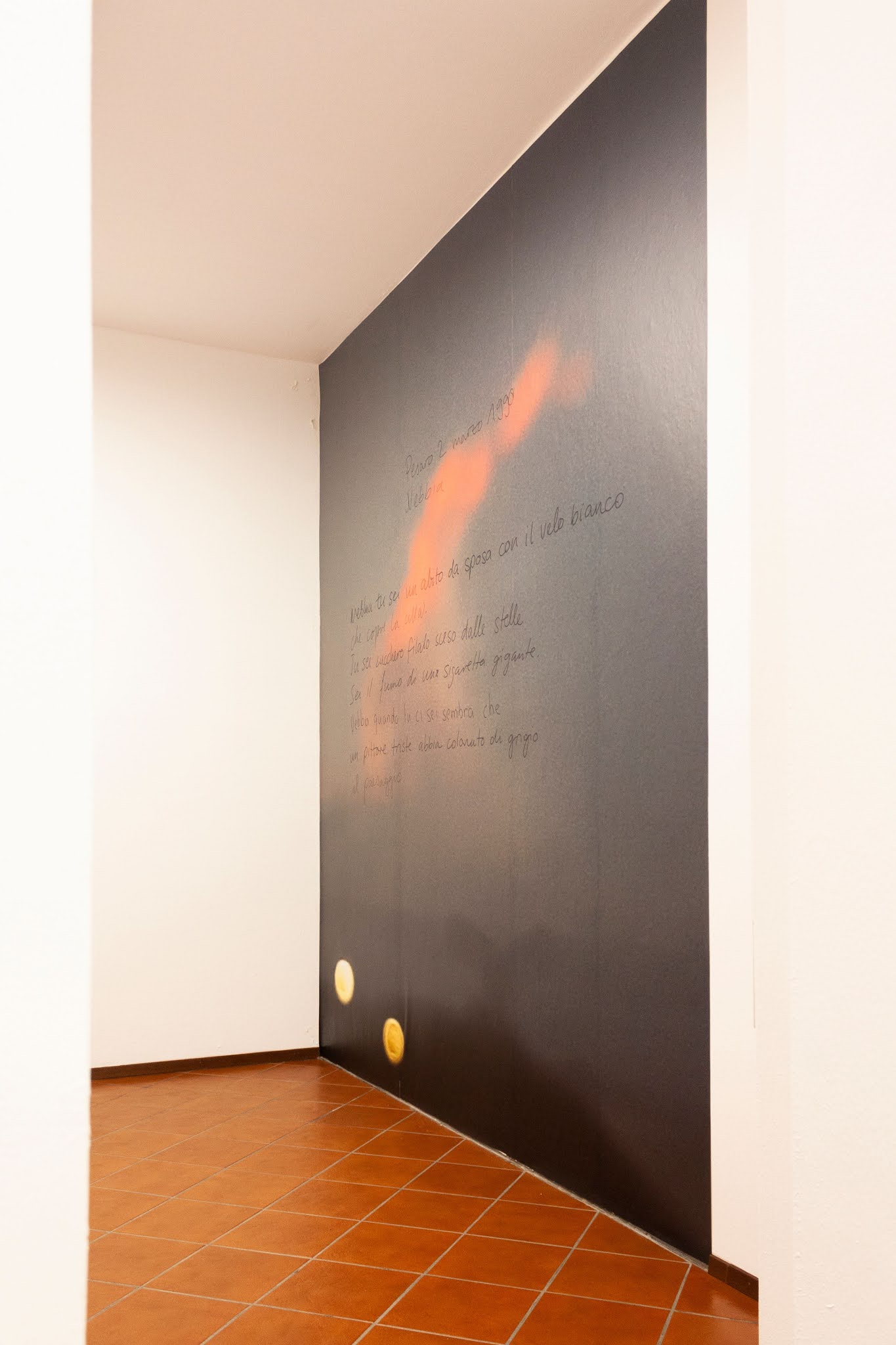 The first temporary exhibition venue will be the caretaker's house of Villa Florida in the Loreto district. Inside this early 20th century Villa, artists Caroline Schattling Villeval and Enrico Boccioletti presented their works. The two artists explore and inhabit together the spaces of Villa Florida, investing with their practices the three floors of the building.

A warm smell invades the nostrils. It is the smell of the asphalt touched by the rain in the summer, a city smell. It reminds of petrichor. Many of us can feel this smell of artificial cohabitation. On July 9, 1968, an ethologist launches an experiment called Universe 25 . The idea is to build an ecosystem where eight mice can live together in optimal co nditions. The result is an underground structure with a square perimeter of 2.7 meters per side, 1.3 meters deep, where the mice live and breed with no looming danger. The perfect surveillance technology both protects and threatens them at the same time. The absence of predators and the availability of infinite food resources would ideally lead the four pairs of mice to reproduce up to a total number of three thousand eight hundred, housed in two hundred and fifty - six nests. The entire system is connected by channels that allow movement and communication between its inhabitants. The construction of a theoretical paradise. In practice, something goes wrong. After a first period of adaptation, the population starts to double exponentially, reaching in a sho rt time the maximum capacity of the structure and exhausting the social roles available in the community. Growth does not stop, living space shrinks, individuals are coerced into forced intimacy. The rapid saturation of the utopian architecture begins to g enerate physical and behavioral anomalies. Some mice begin to attack females and newborns. Others become pansexual, trying to have intercourses with everyone. The females, left alone, take refuge in the highest nests, bringing their offspring along. But th ey cannot provide for them because they are engaged in defending the territory. The vast majority of the young are left to die. There should have been harmony. That is where behavior sank. And here come the beautiful ones . They are quiet individuals who placidly dwell in the antechamber of extinction. Crepuscular individuals, relicts of a social order that is approaching nightfall. Bewildered by the sense of superfluousness and by the noise of information, they find themse lves isolated even when in company. Communication languishes, then breaks down. Their living no longer involves social interactions beyond that represented by the contiguity of bodies. They never engage in sexual approaches, they do not fall in love, nor d o they face each other in combat. Their pelage is in excellent condition, for their main occupation consists in brushing it. Which is why they are beautiful, so beautiful. Their fur becomes the thread of a story: a tale of rats. A thread that is not red an d linear, but grey, hairy and broken. The parasites inhabiting it multiply the stories it conveys, like many windows that open on unknown chats and dark nets. Mice, rats and pests, like vectors, move together in space, their every movement is surveilled. T heir feeble chants echo in the round rooms. If they do not sing, they remain silent. As if afflicted by a strange syndrome, they fantasize about decline. The eyes of the beautiful ones gradually dry up and peer vacuously. Yet, curious eyes never run dry , the informer replies.
And, solo, he dances.
GO+CP
Tags Daily Lazy Exhibition., Enrico Boccioletti, Lugano, SONNENSTUBE
Newer Post Older Post Home