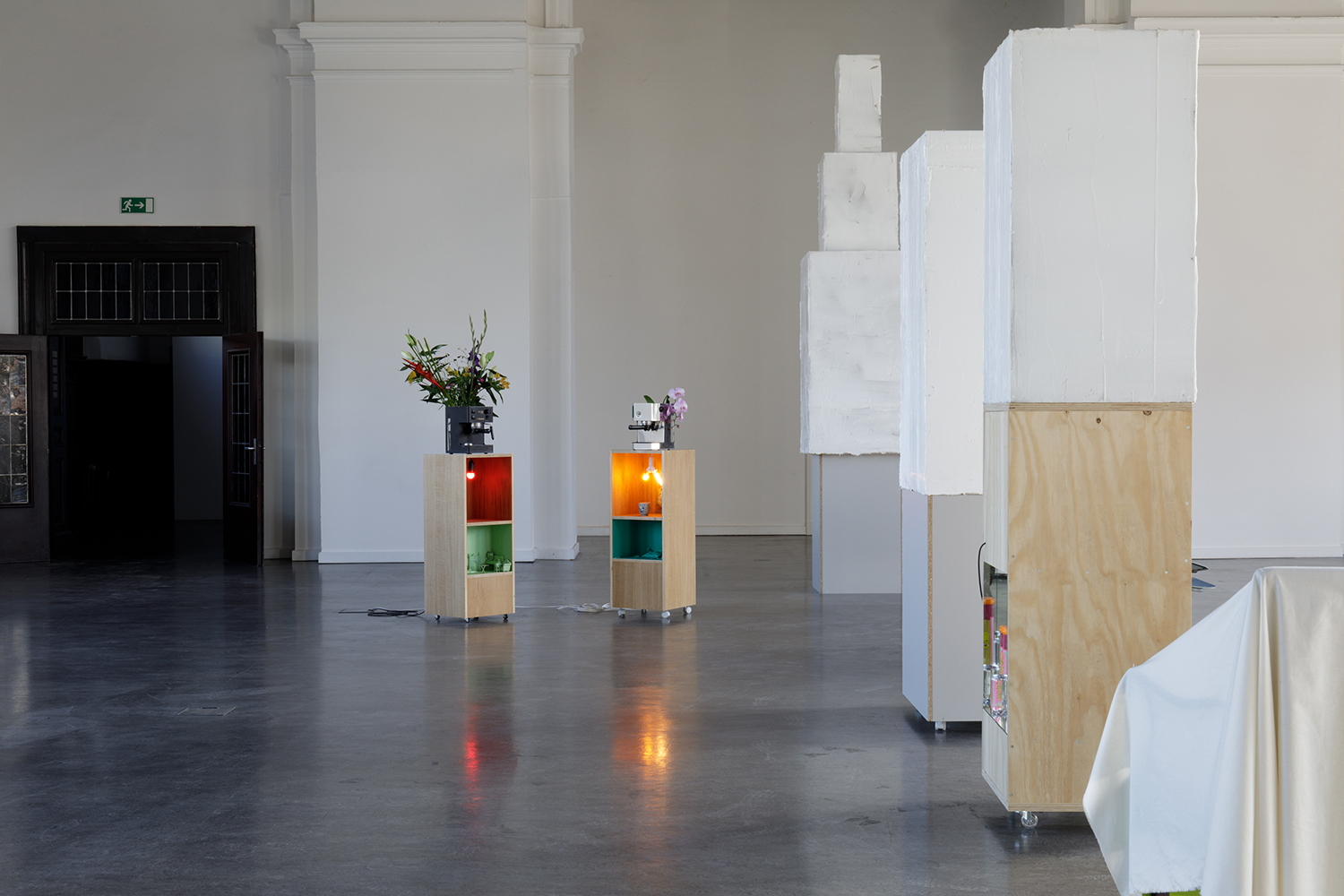 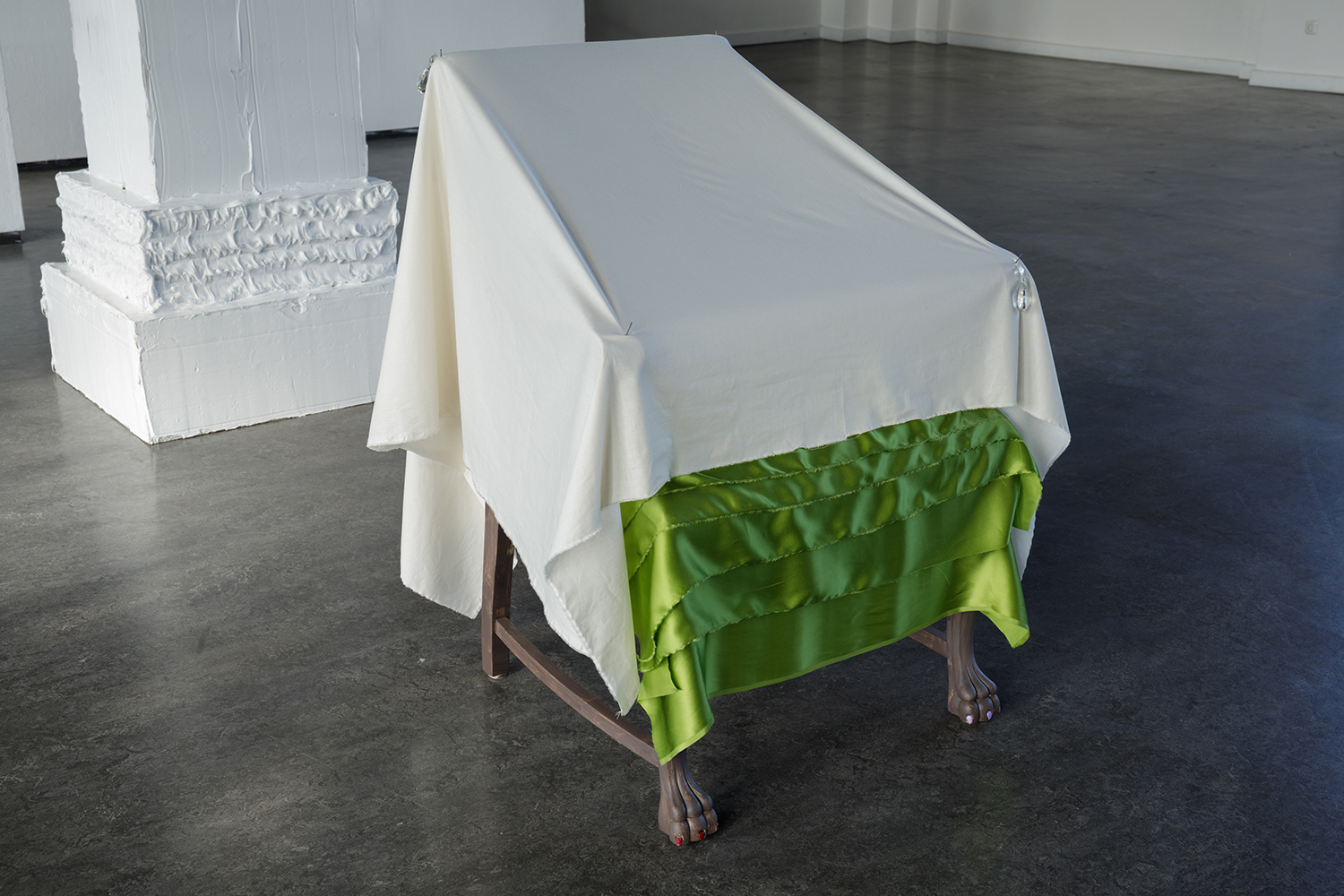 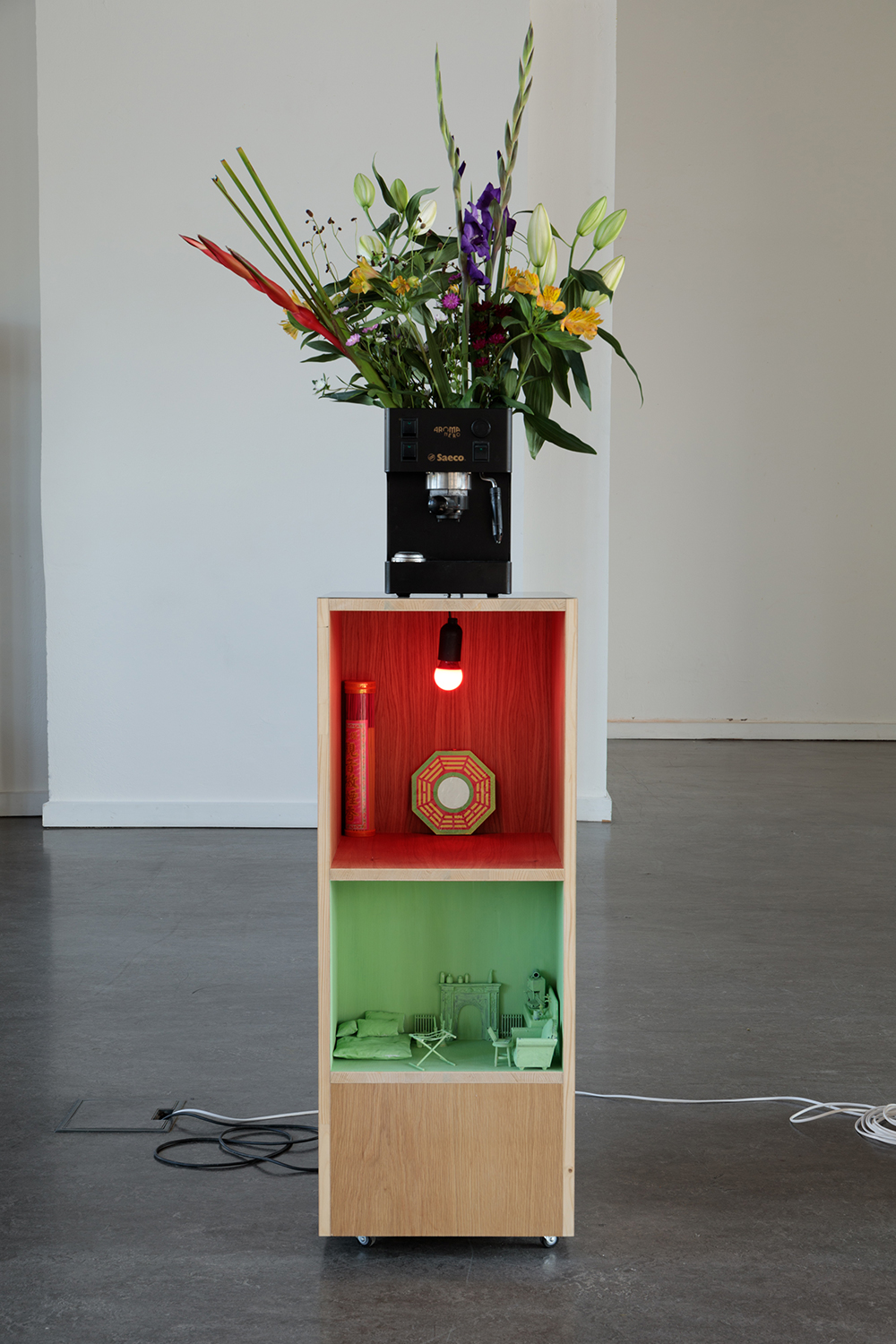 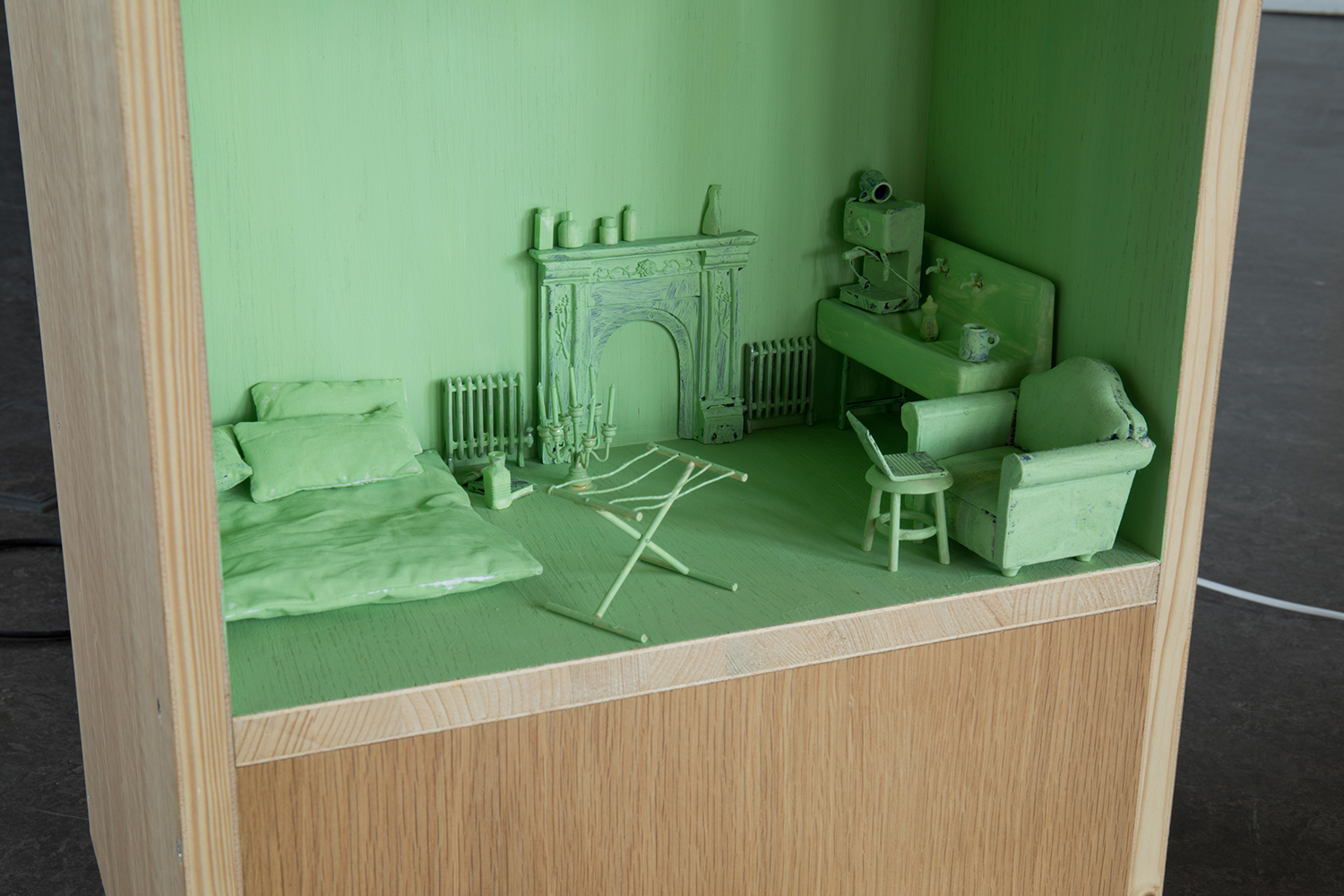 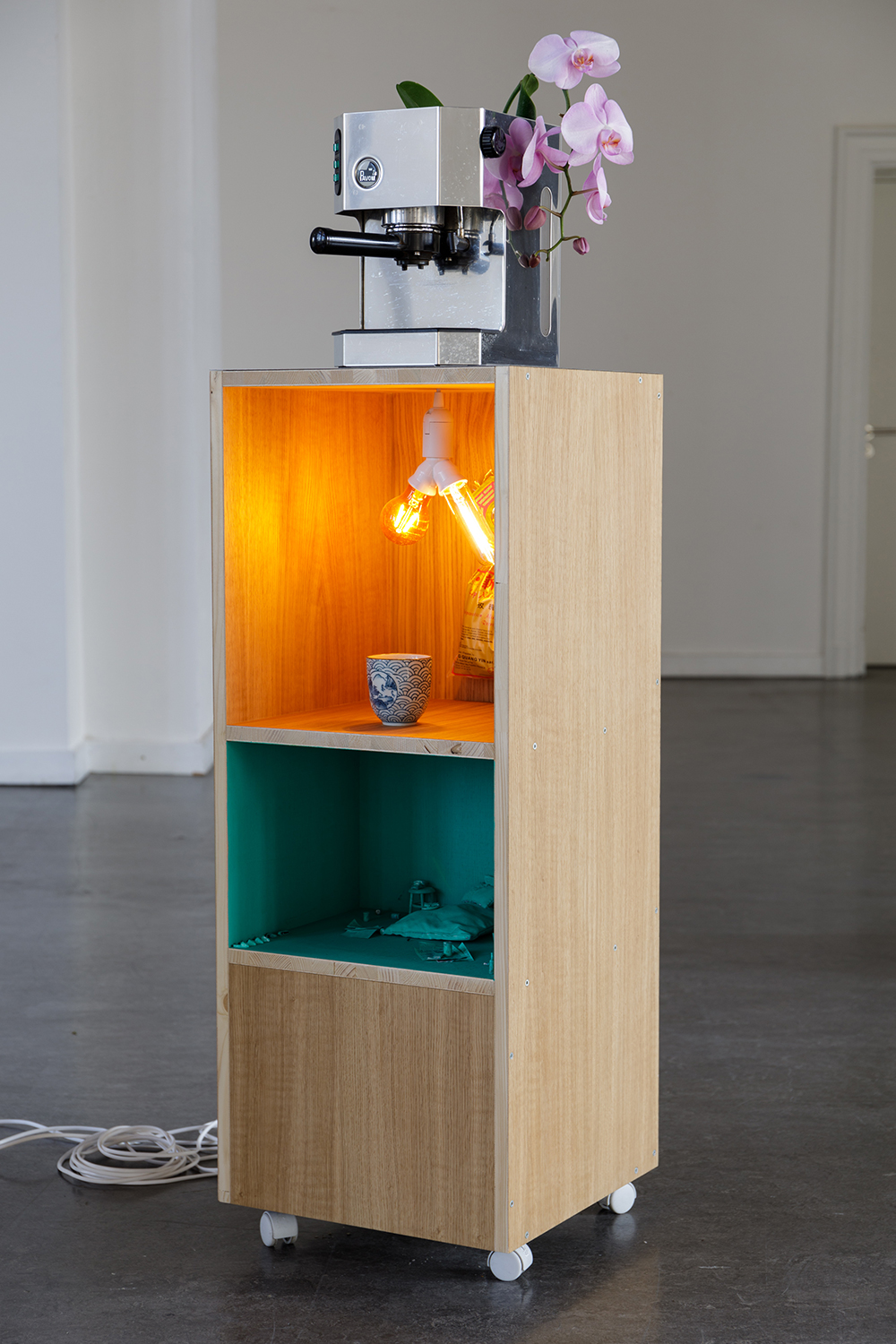 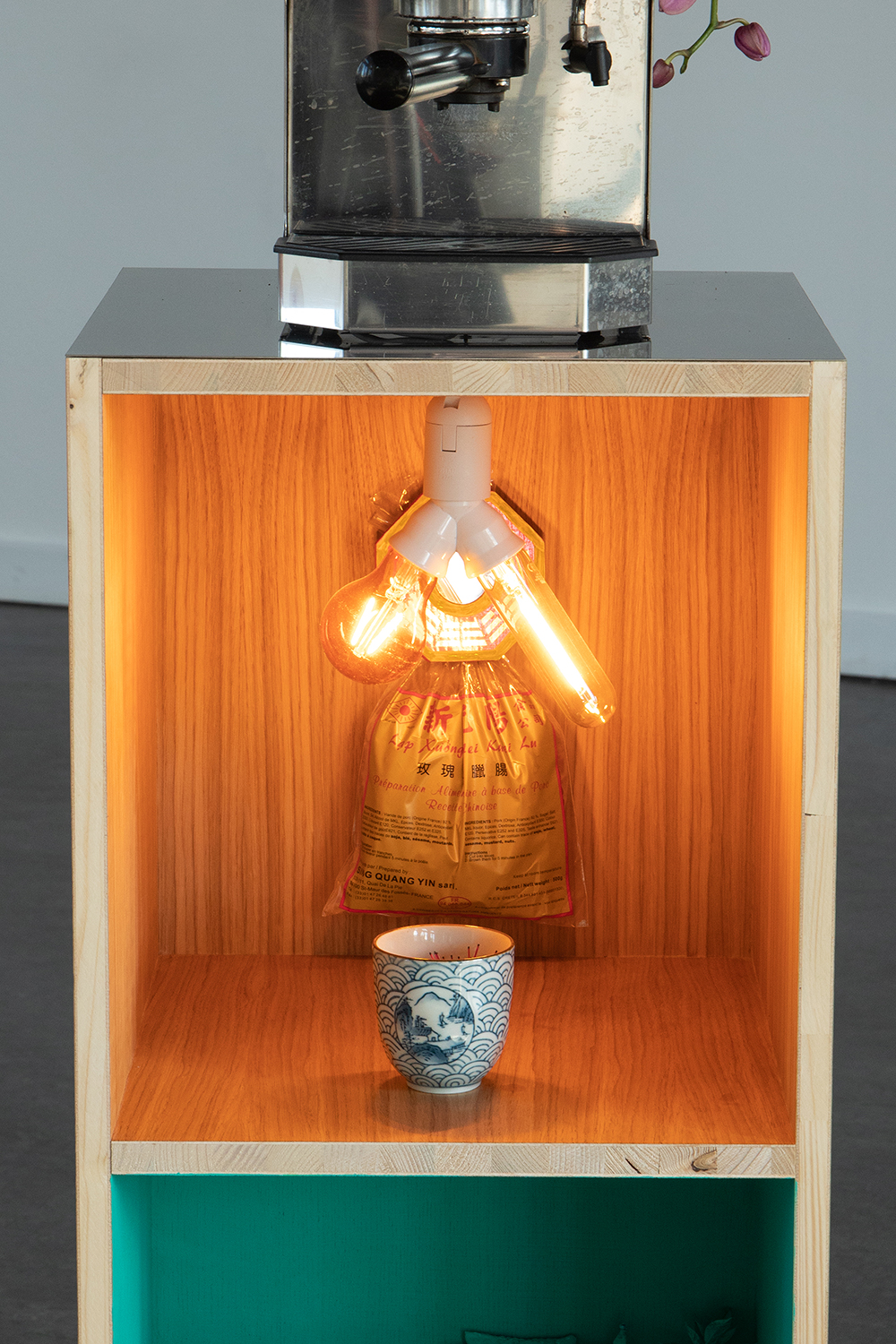 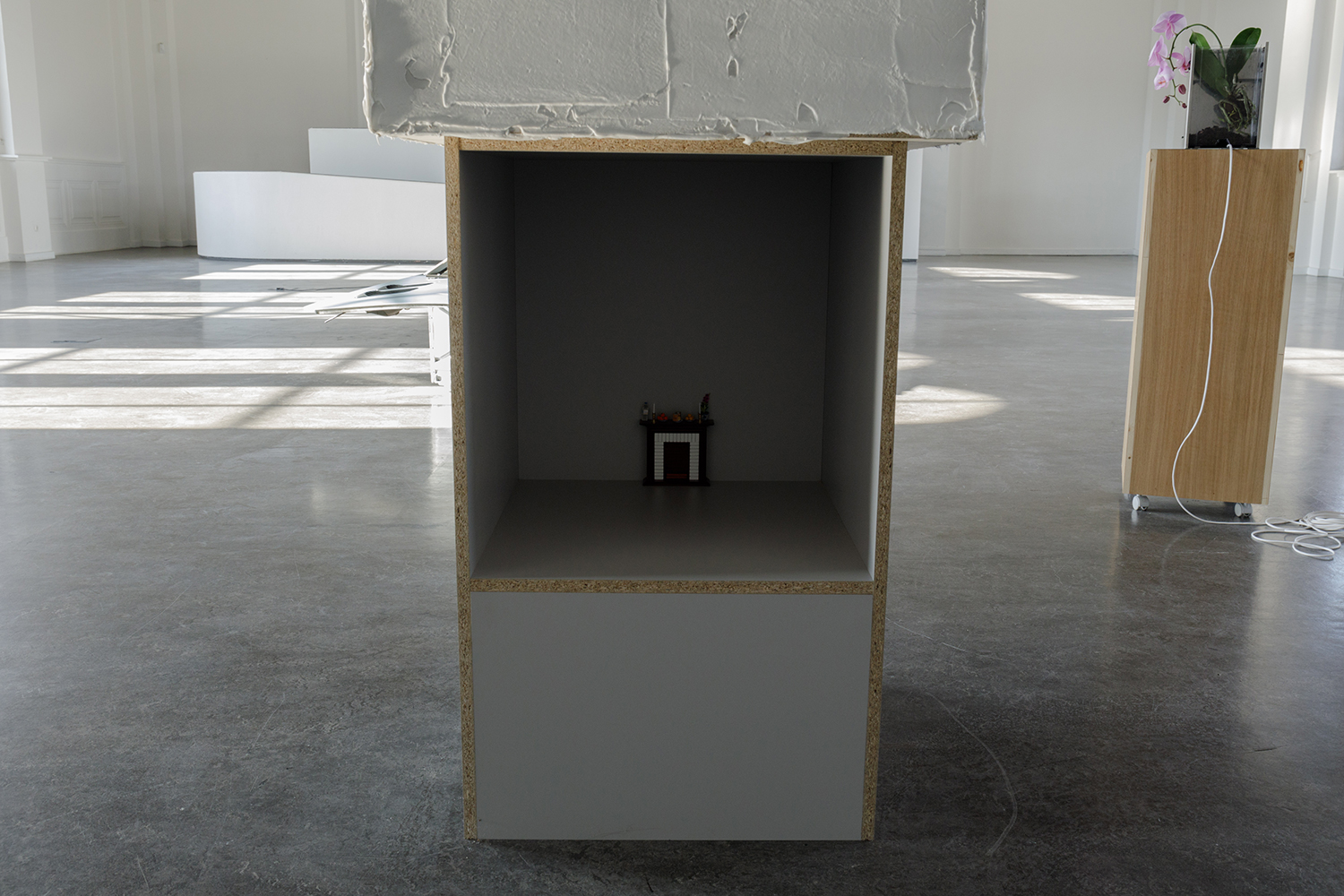 Café Chardonnay – alles nehmen is the title of the exhibition by the Essen-based Vietnamese-German artist who’s been making a name for herself in the Rheinland since 2016. Her work often revolves around questions about the meaning of life, the status of consumption within it, and the roles one falls into all too easily, not to mention the ruptures between them that happen every day and the cultural contradictions that emerge. Drawing on Vietnamese Buddhism, there seems to be an insurmountable gap between the belief in accumulation in the here and now and in life as a station between birth and death running through her work.

The paradox Phan pursues in her multimedia works unfolds somewhere between consumer goods, self-stylization, and projected role models. They contain a sober kind of humor that would normally make you laugh—but, on closer inspection, their uncanny realism makes the laughter stick in your throat.

Phan’s videos work with a seemingly private everyday aesthetic of trivial self-stylization that makes you think they weren’t a precisely planned spectacle, but that’s what they are in the literal sense of the word. Architecture, furniture, picture-in-picture situations, and the protagonists oscillate in their depictions and actions between inner desires and outer representations, between their own notions of identity and the gazes of “Others.” Her camerawork and editing evoke YouTube videos and suggest a kind of intimacy that goes hand in hand with a sense of aimlessness and restlessness. Yet this aspect also makes them equally inaccessible at times.

For her exhibition at Kunstverein Harburger Bahnhof, she has produced a new video and two new groups of sculptures. The empire-style furniture wrapped in banana leaves and sheets with only lion’s paws and painted red claws sticking out recalls the elaborate precautions taken against dust in 19th century drawing rooms, where you would receive guests and fulfill the social obligations appropriate to your status. The reliance of this status quo on hard, often female, domestic labor usually remained hidden. And even today, well-kept furnishings convey the achievement of a certain status in life, while the work needed to get there is often concealed by their attractive sheen. Take everything—and give everything.

The second group of sculptures combines model trolleys with megalomaniacal wedding cakes made of silicone, which could just as well be models for skyscrapers. While the beauty articles and small domestic altars arranged like sets in a type case below speak of a planned and organized life, the oversized cakes testify to oversized expectations. Together they illustrate the contradictions of living in a post-migratory, neoliberal post-capitalism, where everything can be subsumed under the desire for individuality. Or at least that’s the kind of thing you’d think before noticing that your power to achieve your own vision of success is also a commodity in itself.