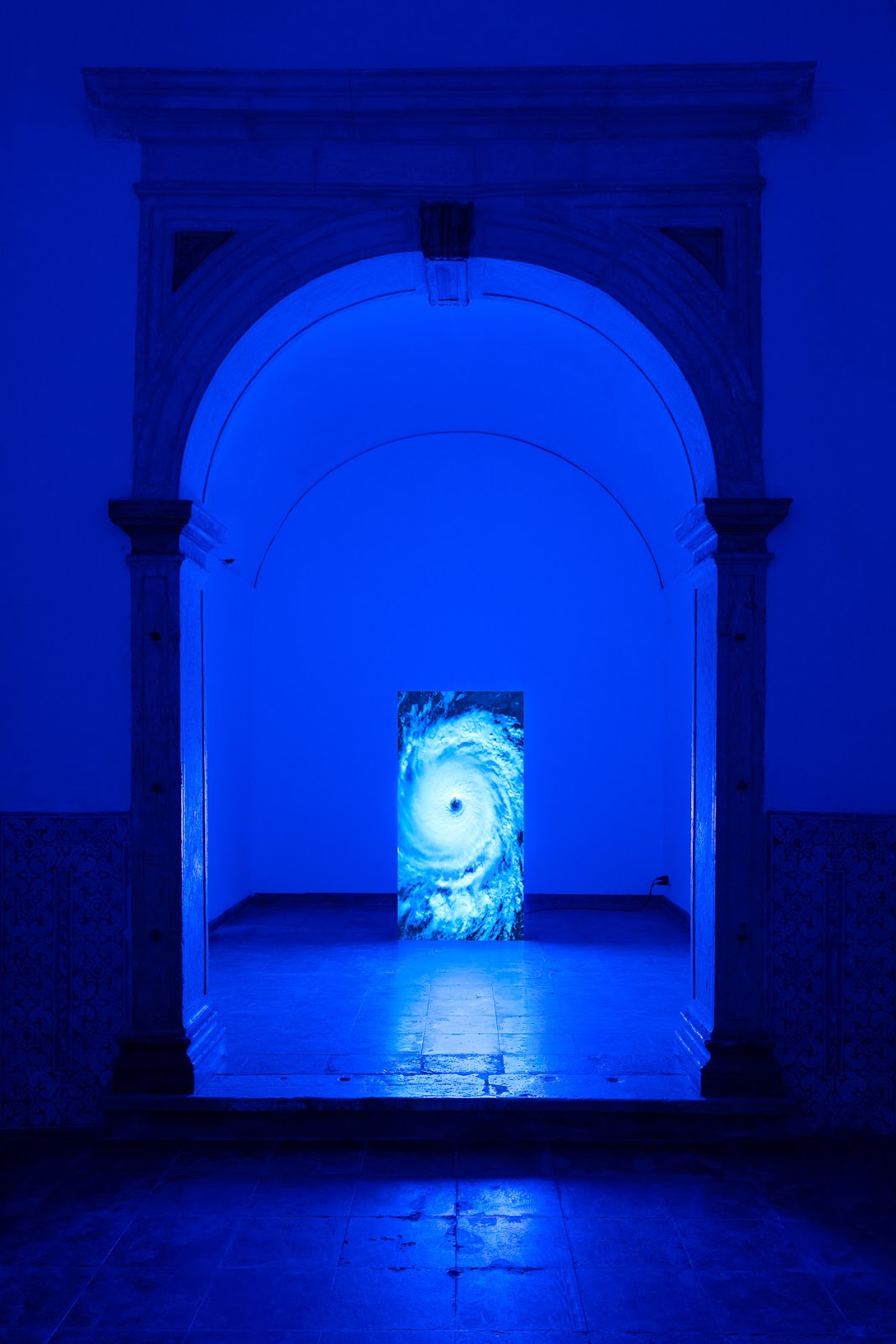 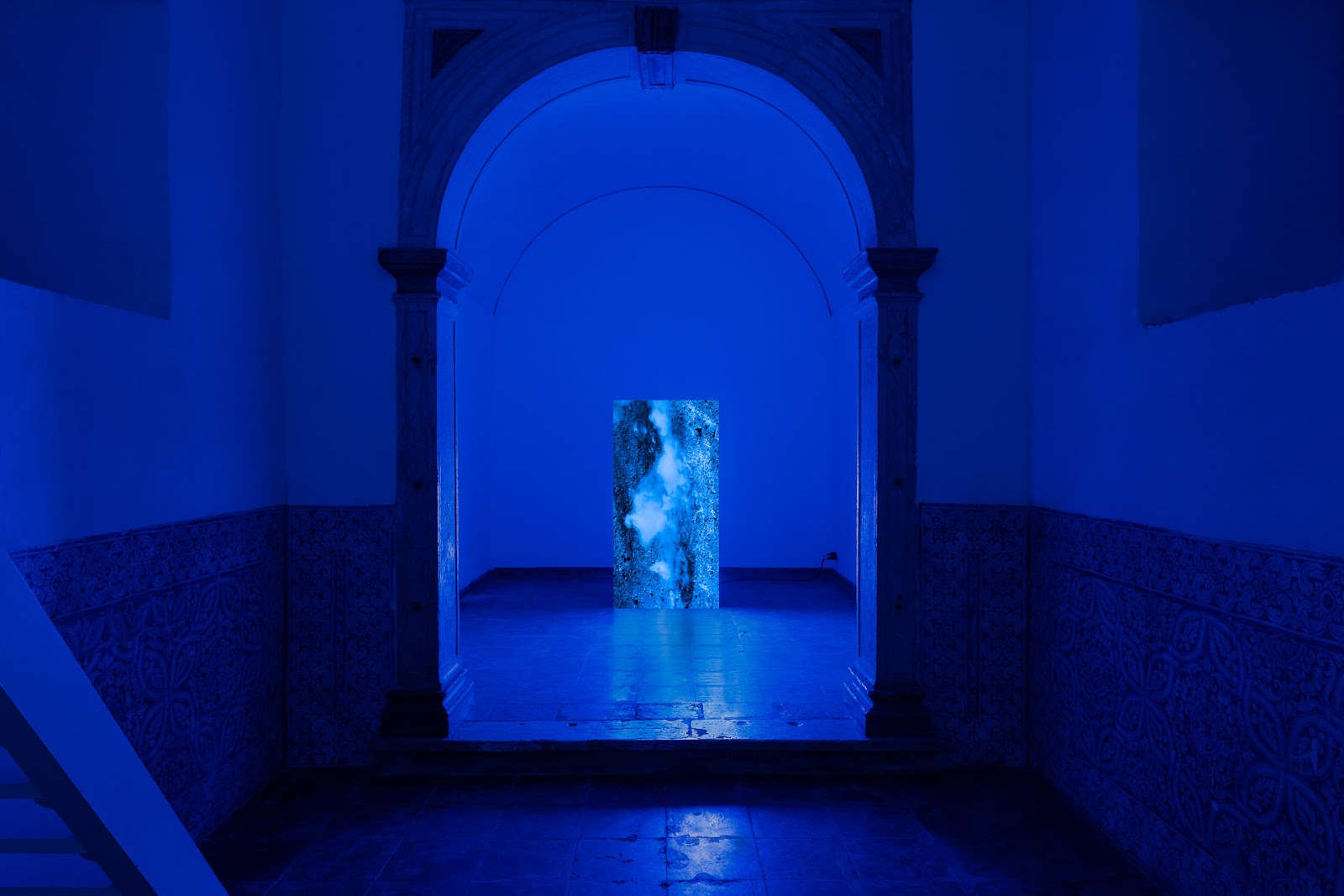 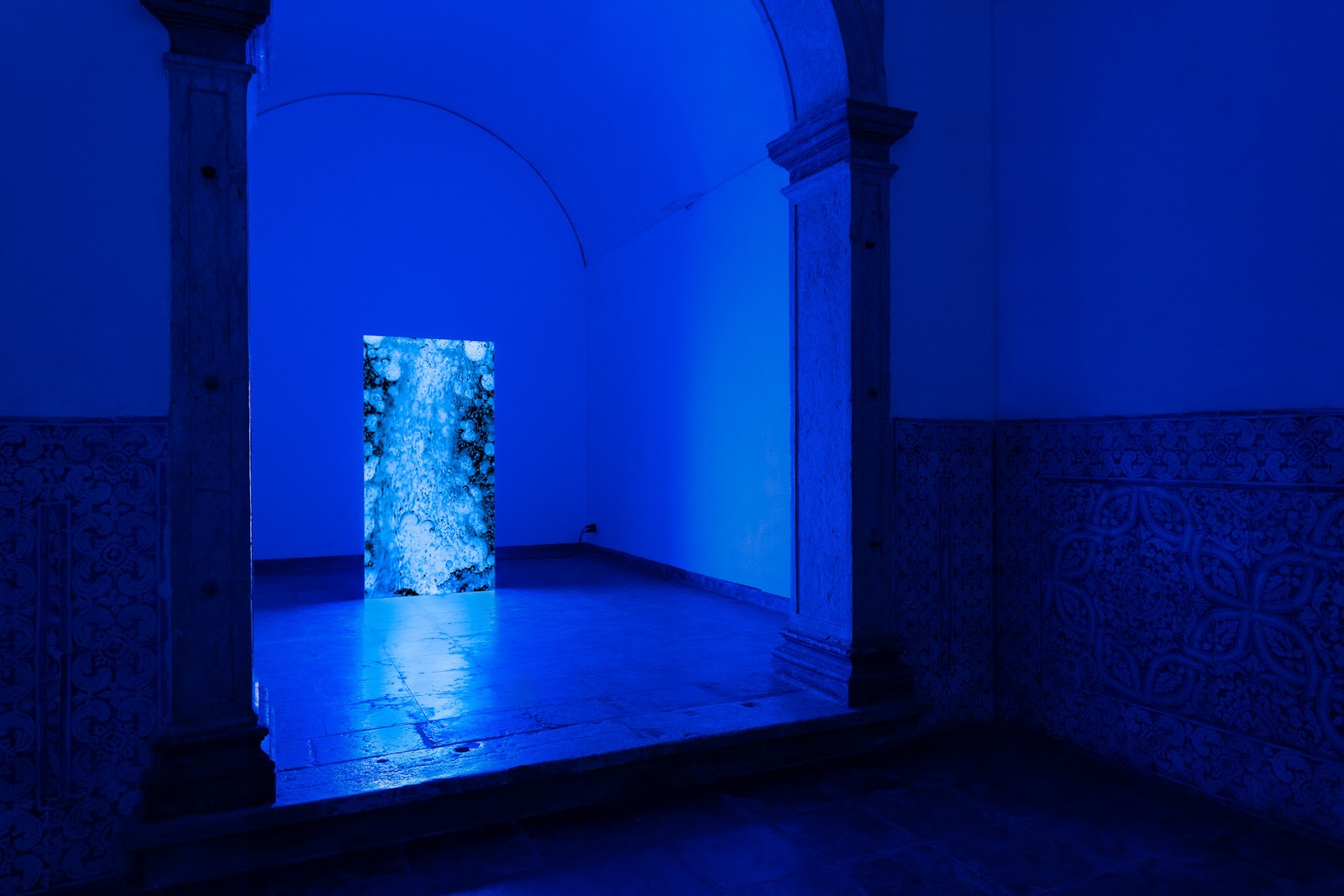 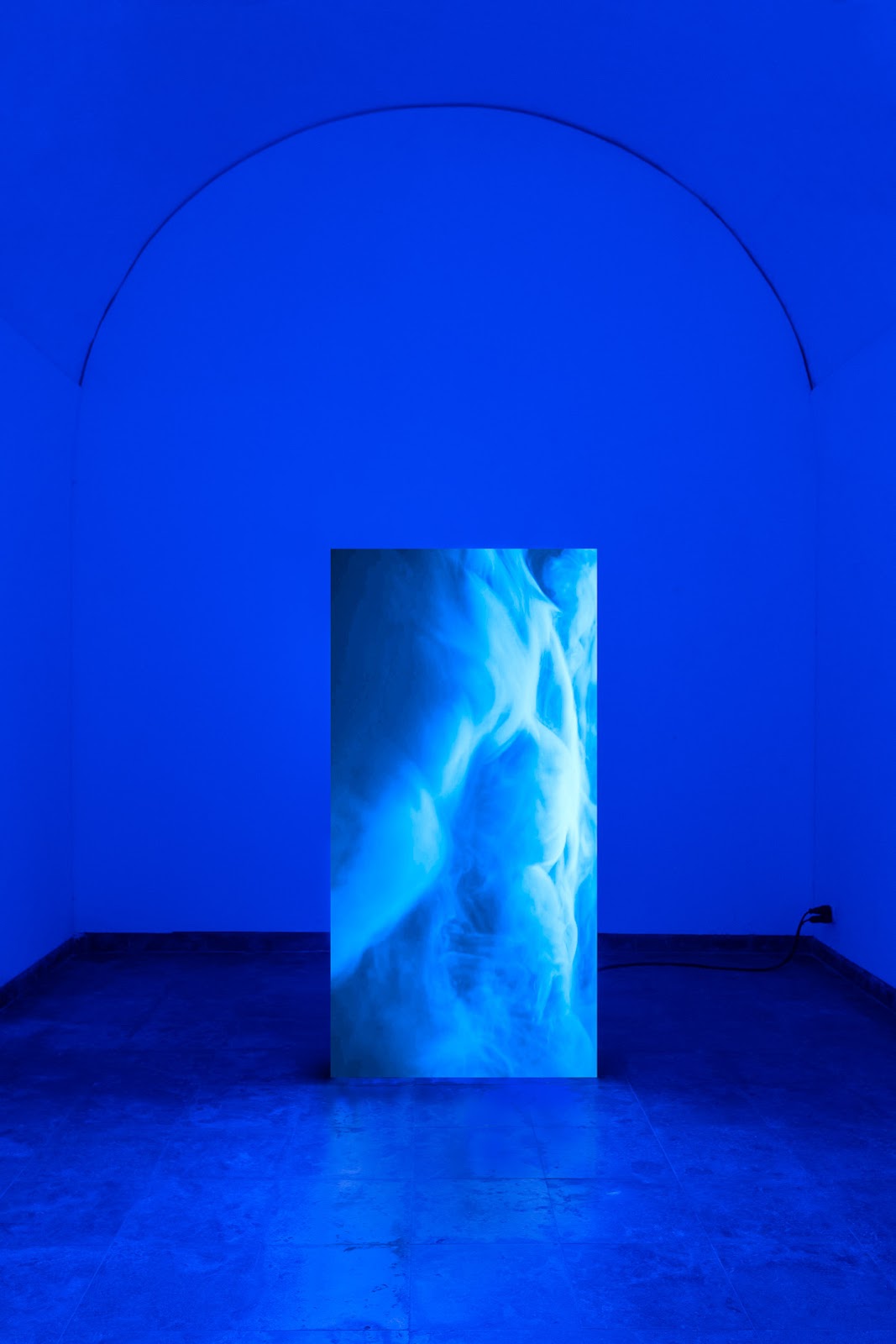 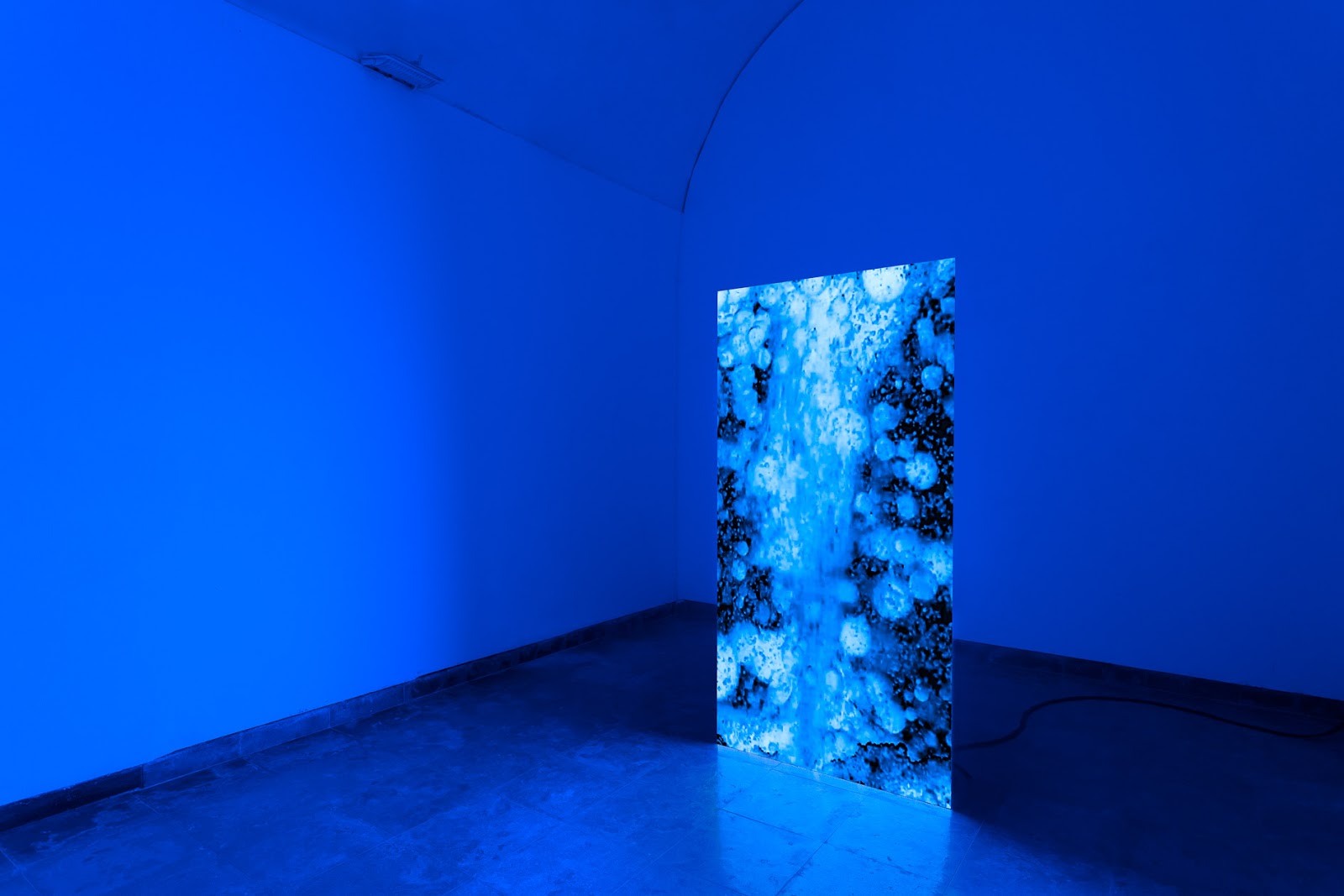 The waves broke and spread their waters swiftly over the shore. One after another they massed themselves and fell; the spray tossed itself back with the energy of their fall. The waves were steeped deep-blue save for a pattern of diamond-pointed light on their backs which rippled as the backs of great horses ripple with muscles as they move. The waves fell; withdrew and fell again, like the thud of a great beast stamping. – Virginia Woolf, The Waves

Sometimes one encounters a boundary along which two elements are coming together or pulling apart, with momentous consequences. When two opposing energies, like liquid and gas or warm and cold meet, they do not mix as one might suppose. Each keeps its own individuality. When one gains supremacy, the other retreats, creating new phenomena in the wake. Paulo Arraiano’s inspiration for many of his works is the sea near the Azores with fault lines where tectonic plates come together/pull apart. The movements of these plates is a force shaping the materials and features of our planet. Below the bursting seams of the open wound lies a sort of smithy forging of materials, which bubbling to the surface carry important elements. Can this place where heat and water meet be the cradle of life? This dragging, pulling, rising, bulging and evermoving action animating our world?

What is life? In an age when biologists push their research by using digital technology and computer simulations to model living things, this question seems to have many possible answers. The definitions of what life is proliferates as much as life itself. I am personally still most comfortable with biologist Lynn Margulis’ approximation that living things are those that grow and multiply. They create copies of themselves and grow their own scaffolding structures. In this sense life is a pulsating (collection of) cells that separate inside from outside through a semi-porous membrane. Life hence describes multiplying entities that breathe, love and consume.

From water and oxygen, all living beings were able to grow and colonise this planet. To use the words of Stefan Helmreich in Sounding the Limits of Life. Essays in the Anthropology of Biology and Beyond, “[w]e can think of water and oxygen as once universal and multiple. Water becomes universal through the circulation that spans space and time. It becomes multiple through its presence in different bodies, and through a variety of cultural meanings. Water, like life, an amalgam of the conceptual and actual, is also becoming newly readable as a substance-concept with unsteady identity.” Particles, atoms and cells float in suspended space, dancing around one another, breathing and pulsating, as if stars when you are spinning freely with arms extended under the night sky.

The space of the video, Inhale, Exhale (Self Breathing Kit) at Travessa da Ermida spills out to the space and envelops you in an embrace. You might find that the whole room is breathing to the same rhythm as you. You are transported to the bottom of the ocean, or transformed into tiny particles running through air vents and bloodstreams… It is as if the sound is coming from inside your body. You feel suspended, floating in the ocean, the waves around you each bringing with them new sensations. They contain both the mundane and the everlasting, love and war, individual and shared experiences within.

Water and oxygen flow through us as much as we flow through it. They flow through difference. We are implicated in all other living beings through the waves and swells of water that course through and replenish us. As Astrida Neimanis writes in Bodies of Water Posthuman Feminist Phenomenology, “[f]or us humans, the flow and flush of waters sustain our own bodies, but also connect them to other bodies, to other worlds beyond our human selves. Indeed, bodies of water undo the idea that bodies are necessarily or only human. The bodies from which we siphon and into which we pour ourselves are certainly other human bodies (a kissable lover, a blood transfused stranger, a nursing infant), but they are just as likely a sea, a cistern, an underground reservoir of once-was-rain. Our watery relations within (or more accurately: as) a more-than-human hydrocommons thus present a challenge to anthropocentrism and the privileging of the human as the sole or primary site of embodiment.”

And in me too the wave rises. It swells; it arches its back. I am aware once more of a new desire, something rising beneath me like the proud horse whose rider first spurs and then pulls him back. What enemy do we now perceive advancing against us, you whom I ride now, as we stand pawing this stretch of pavement? It is death. … The waves broke on the shore. – Virginia Woolf, The Waves