with curatorial support from Miriam Bettin 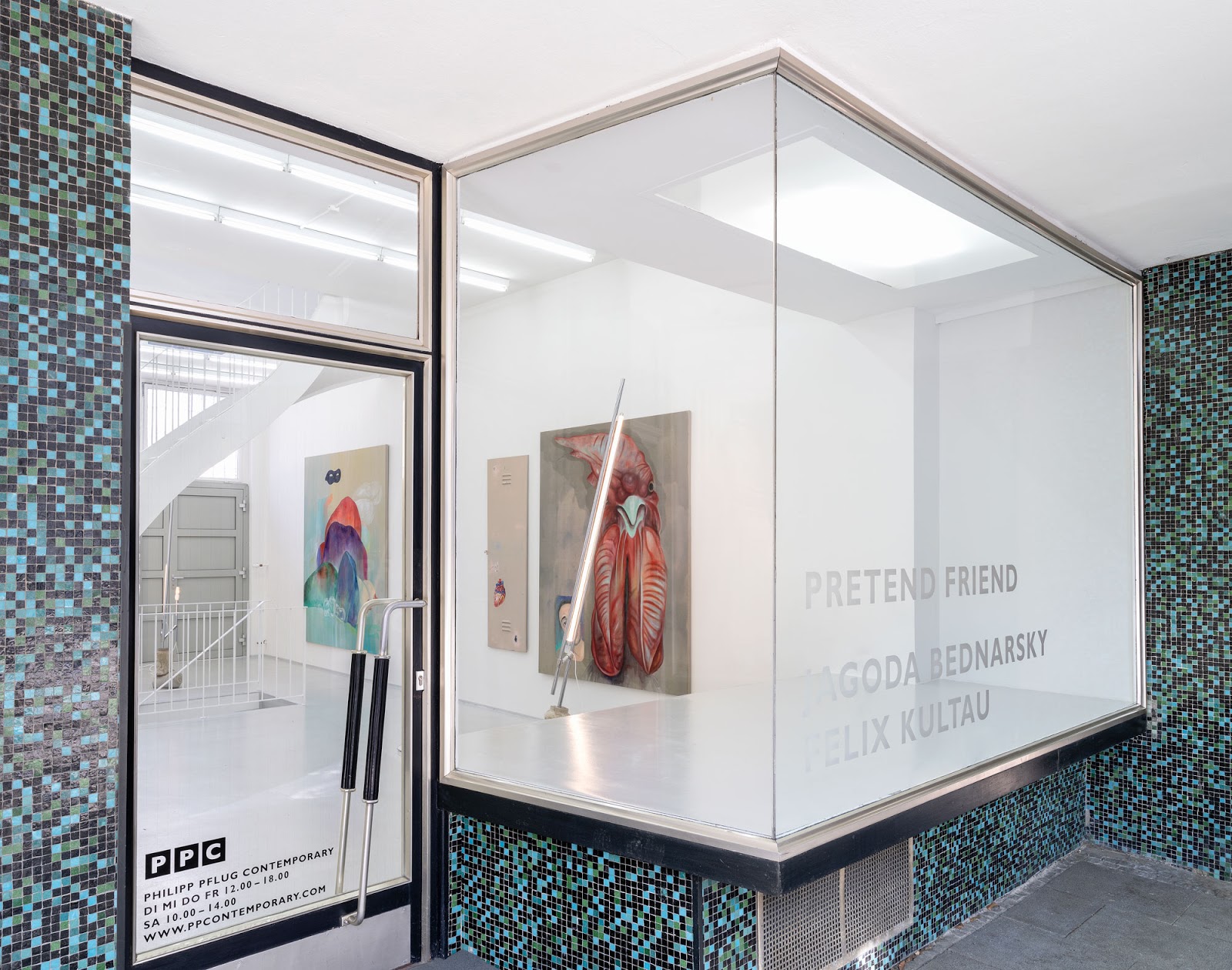 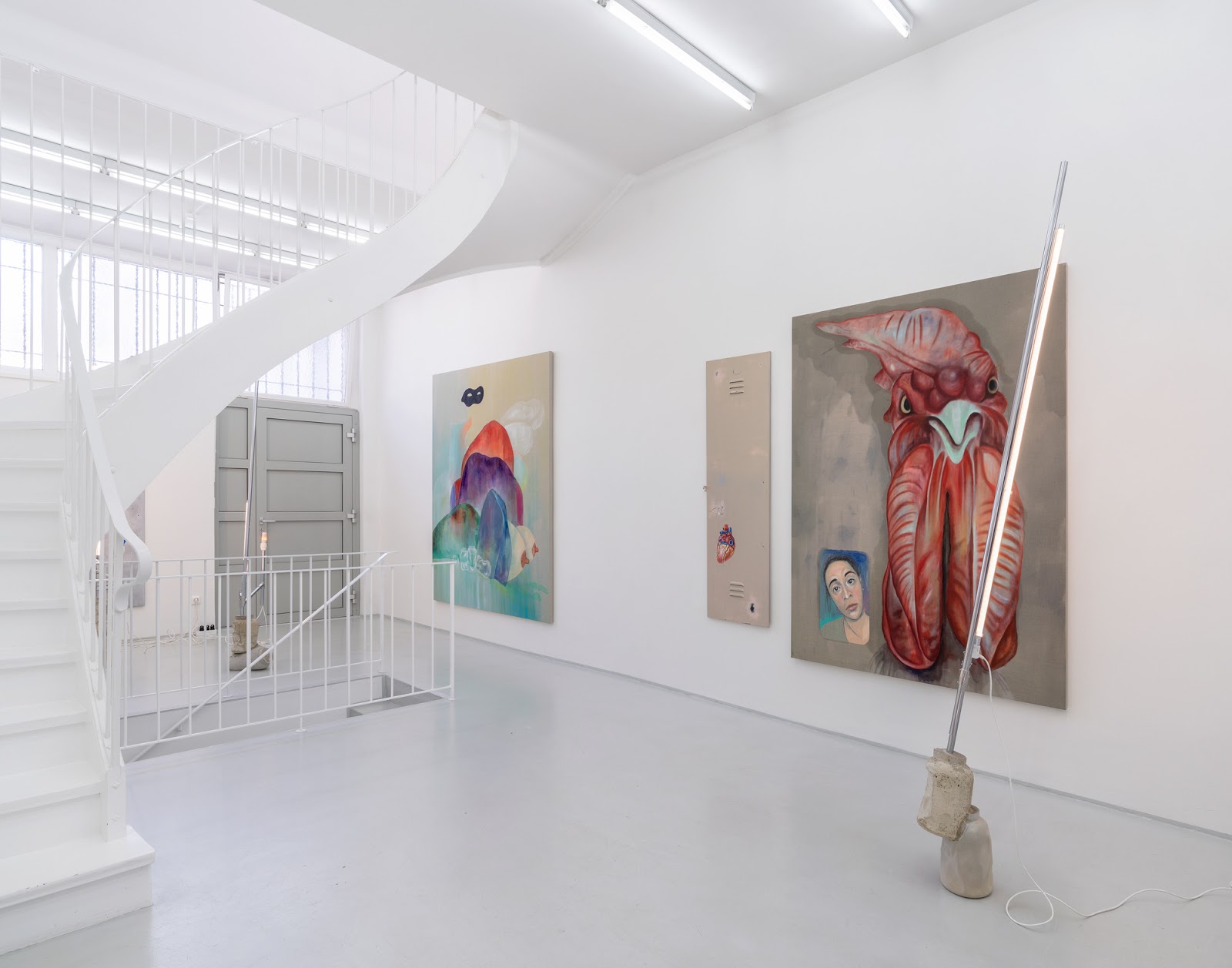 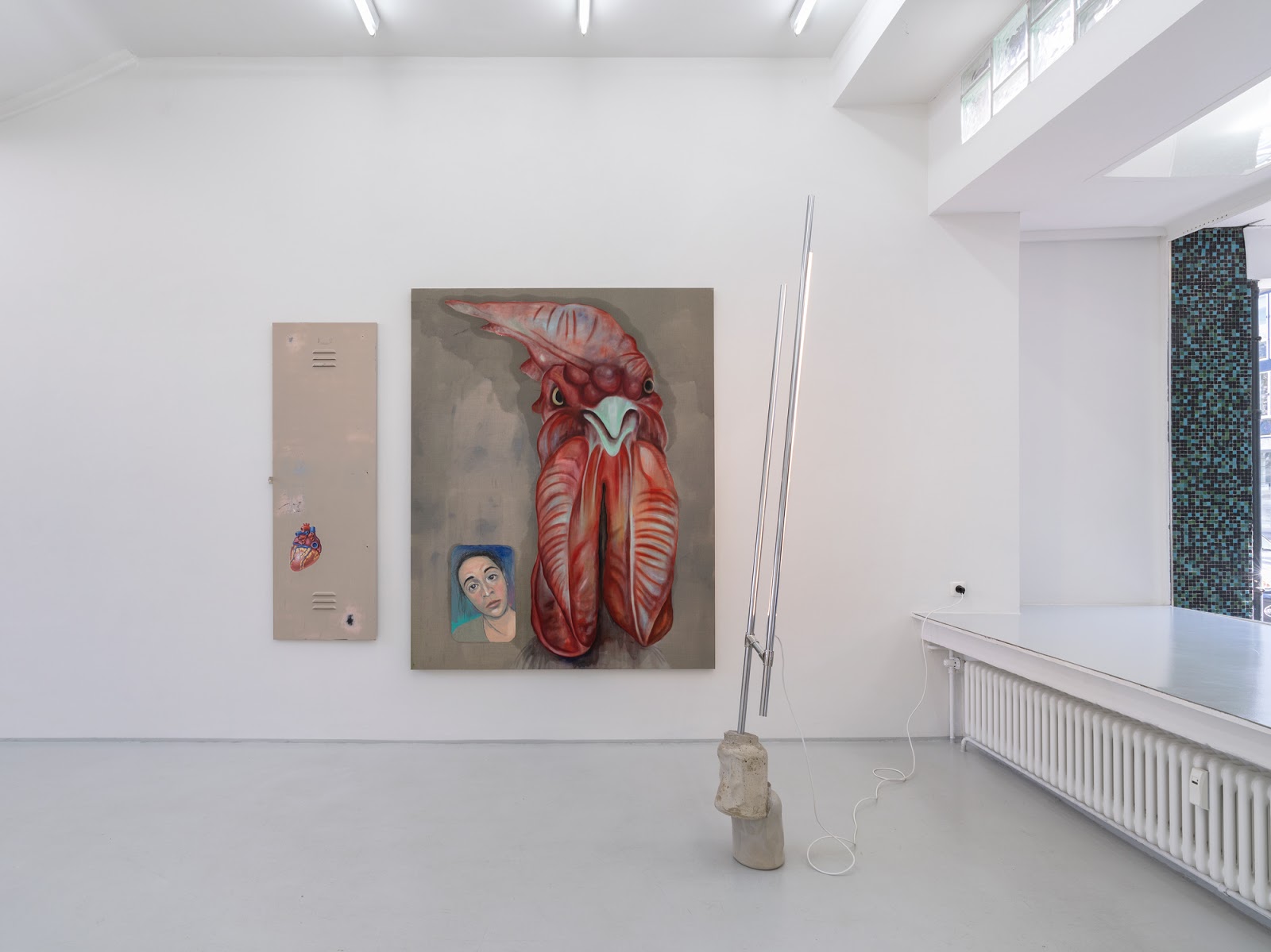 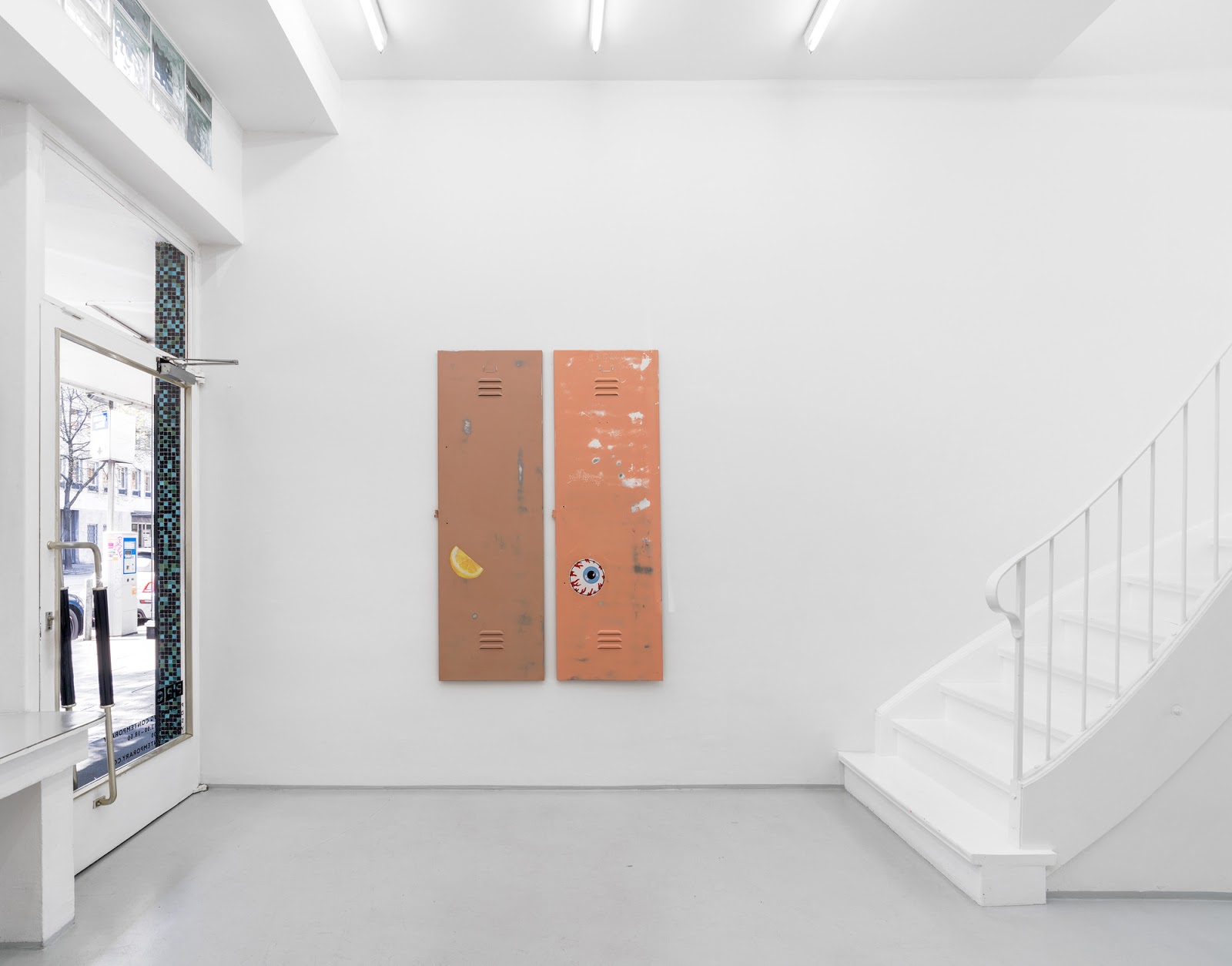 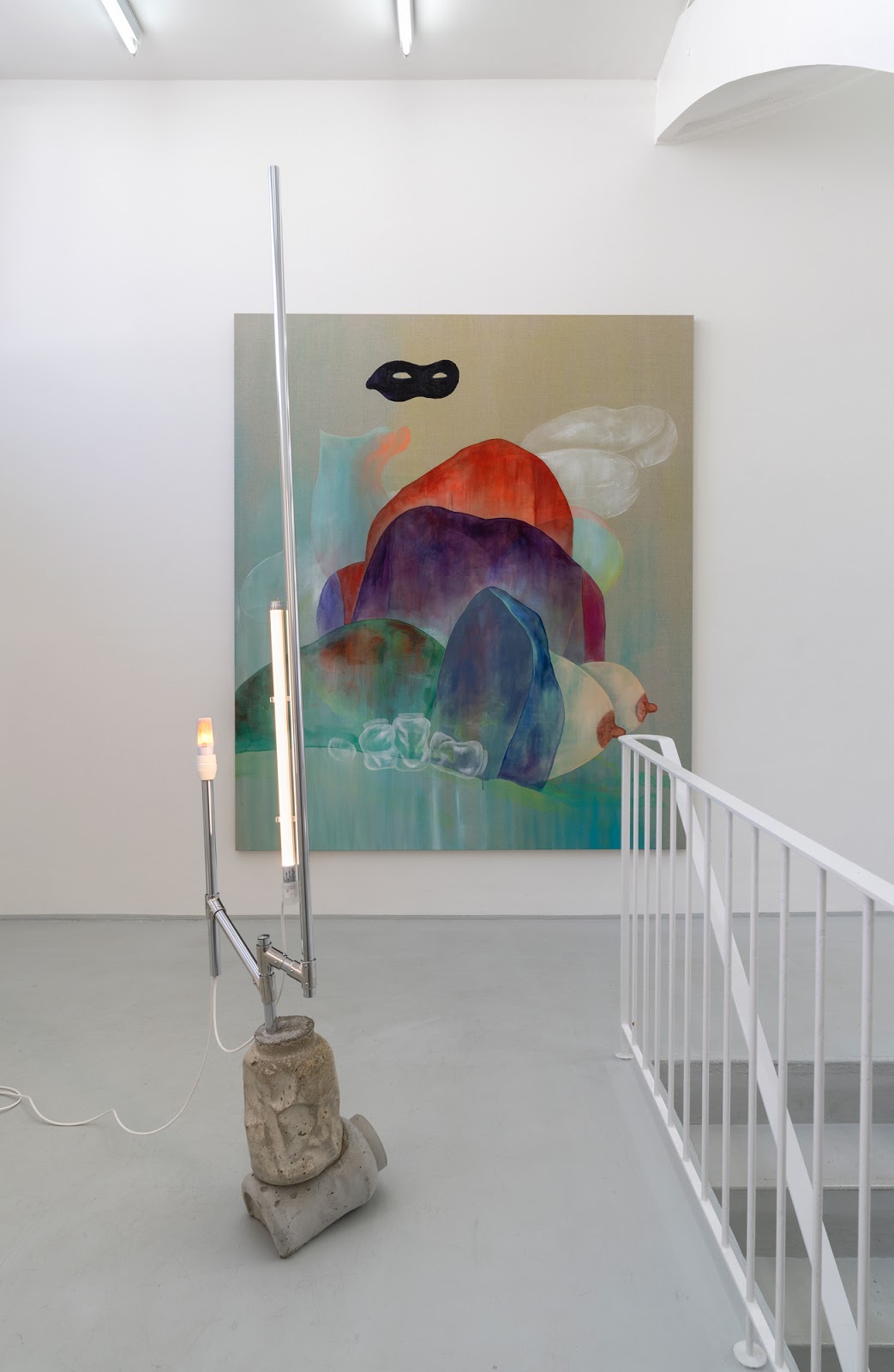 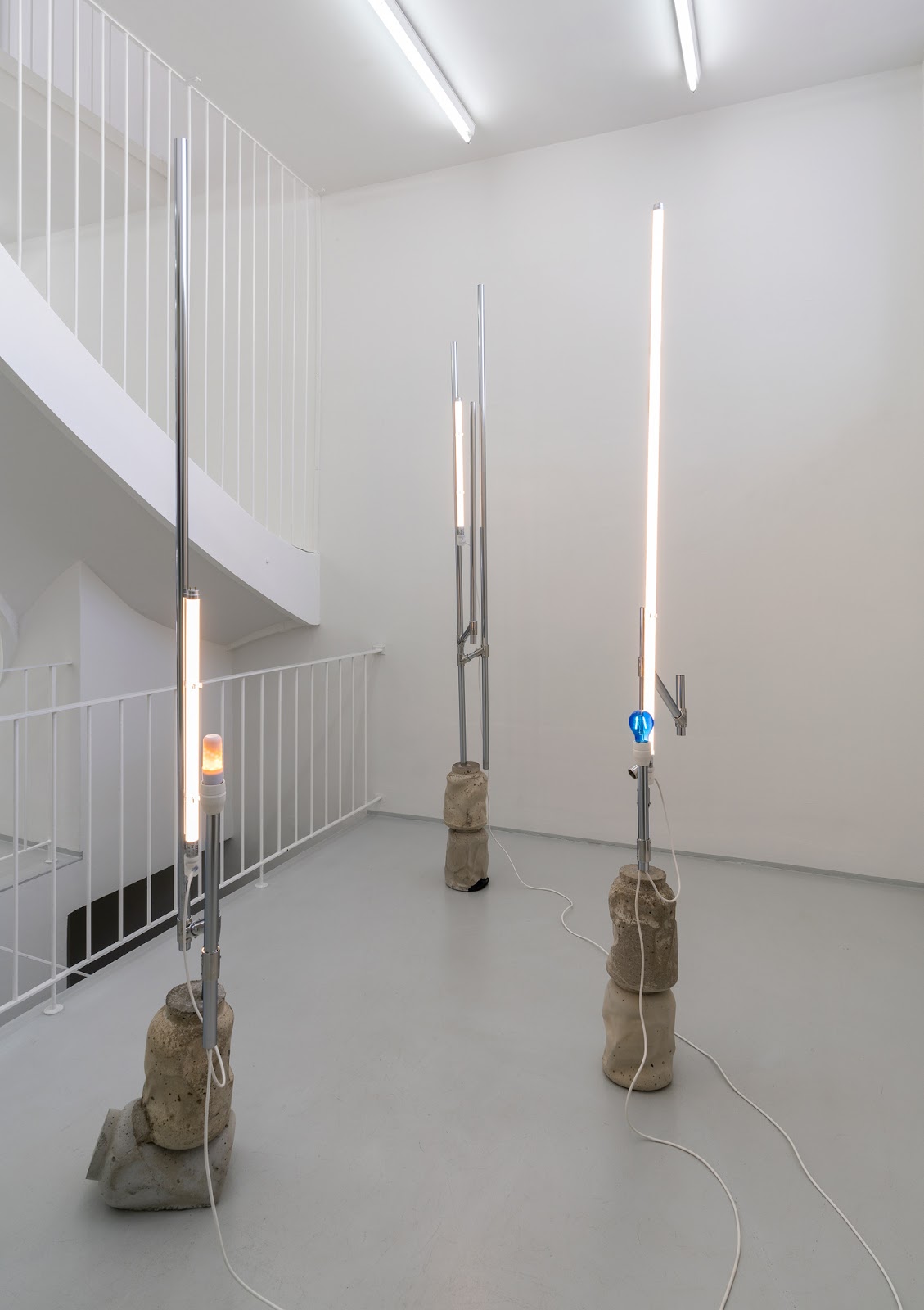 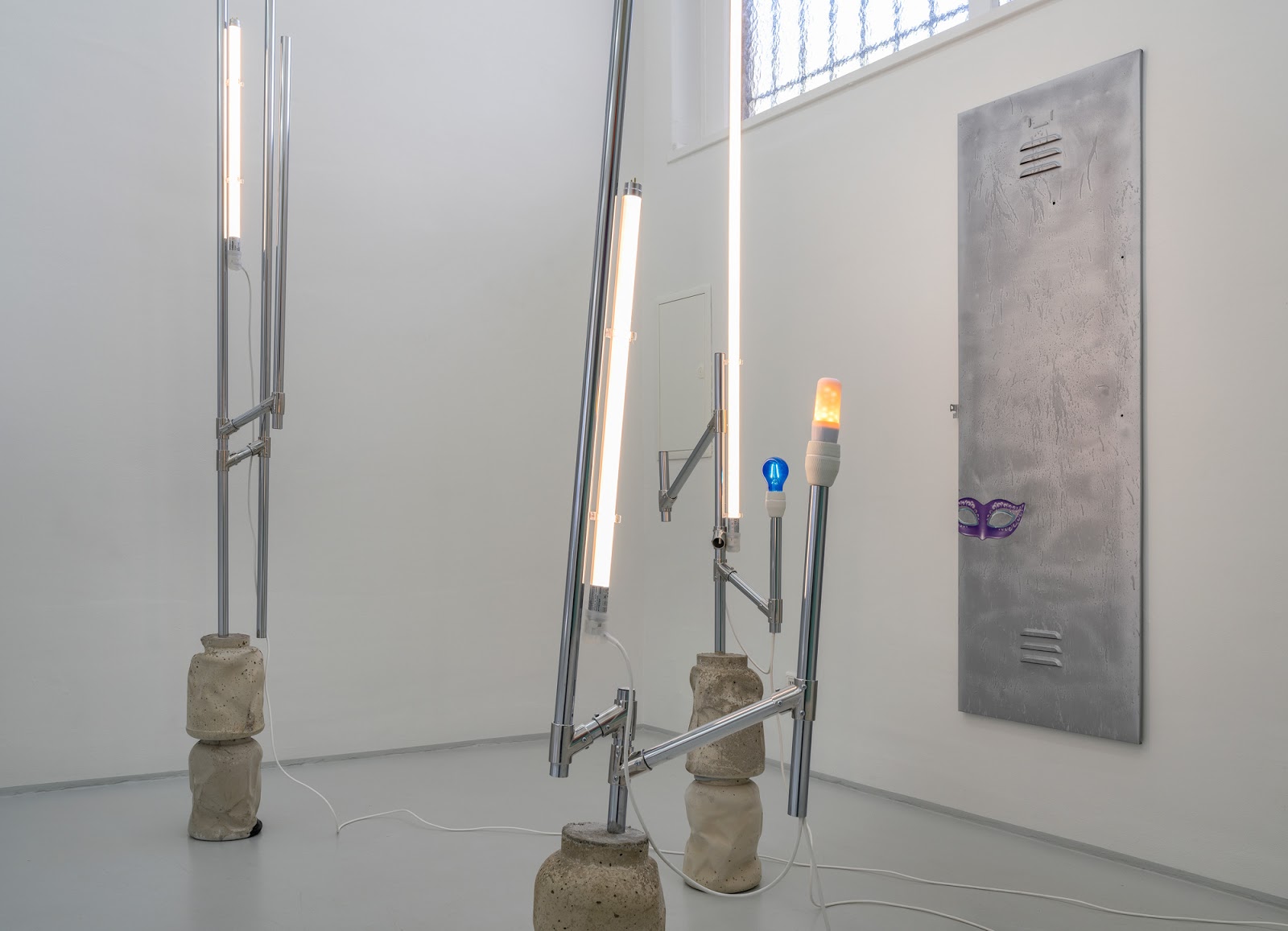 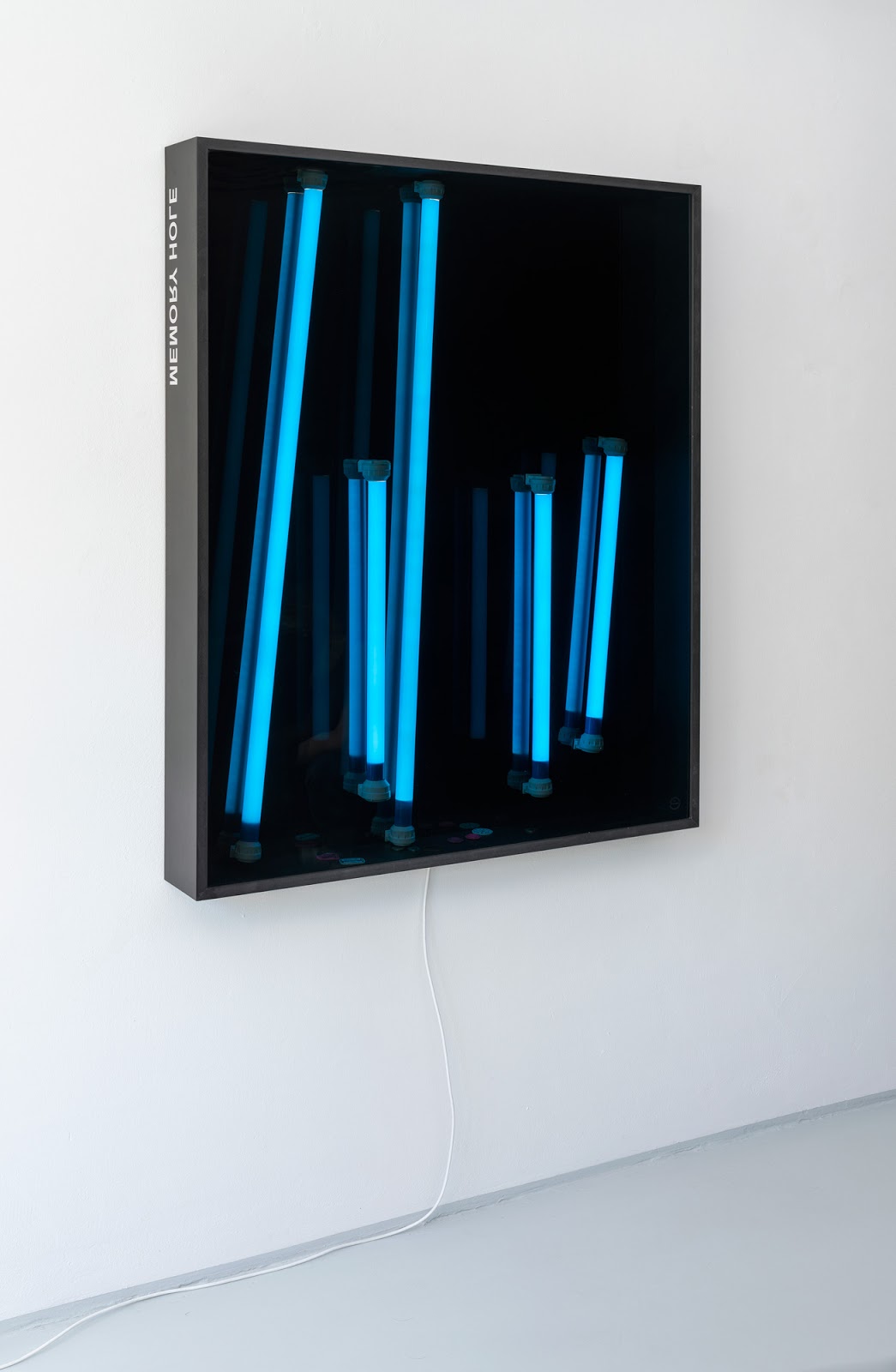 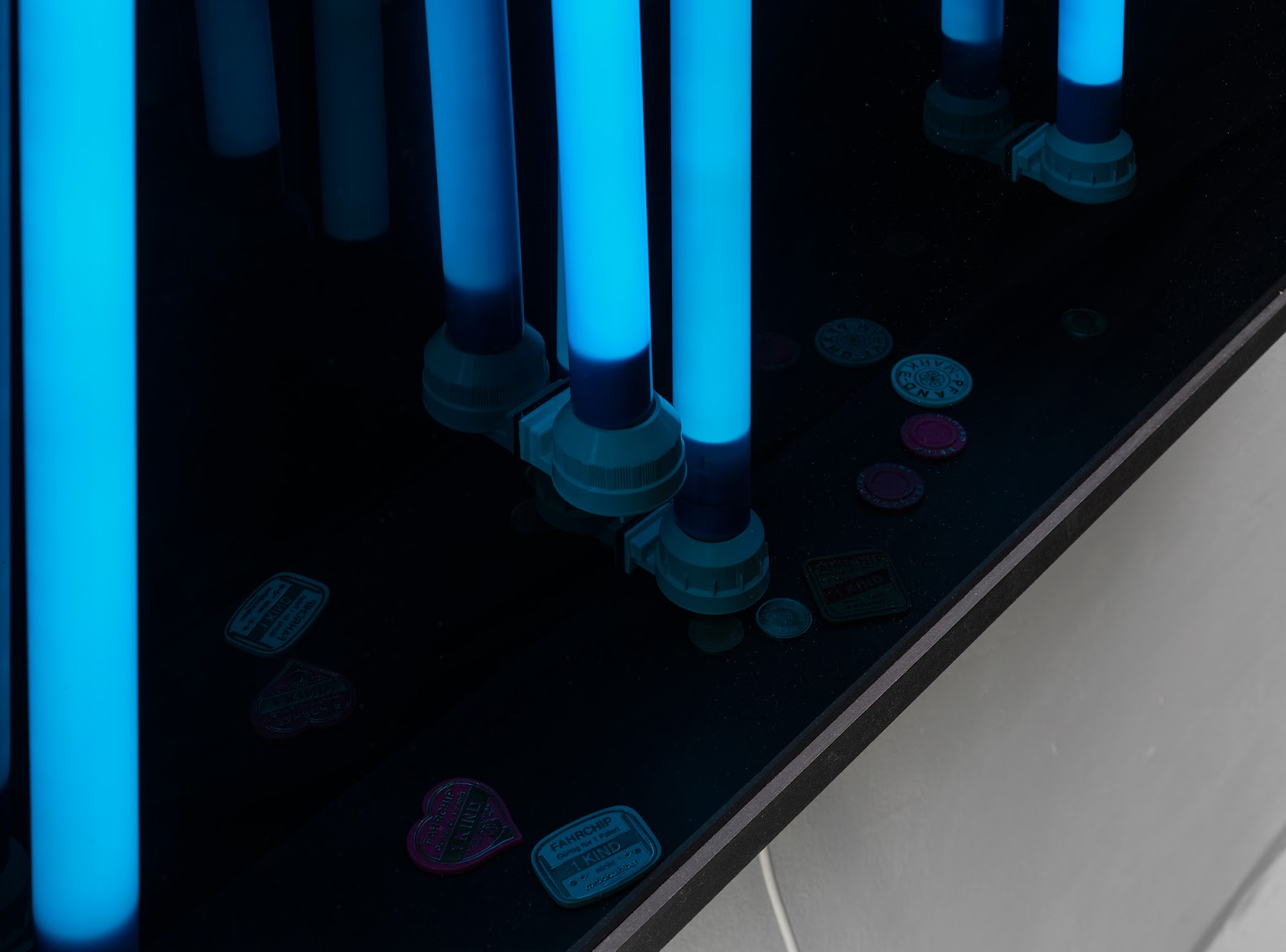 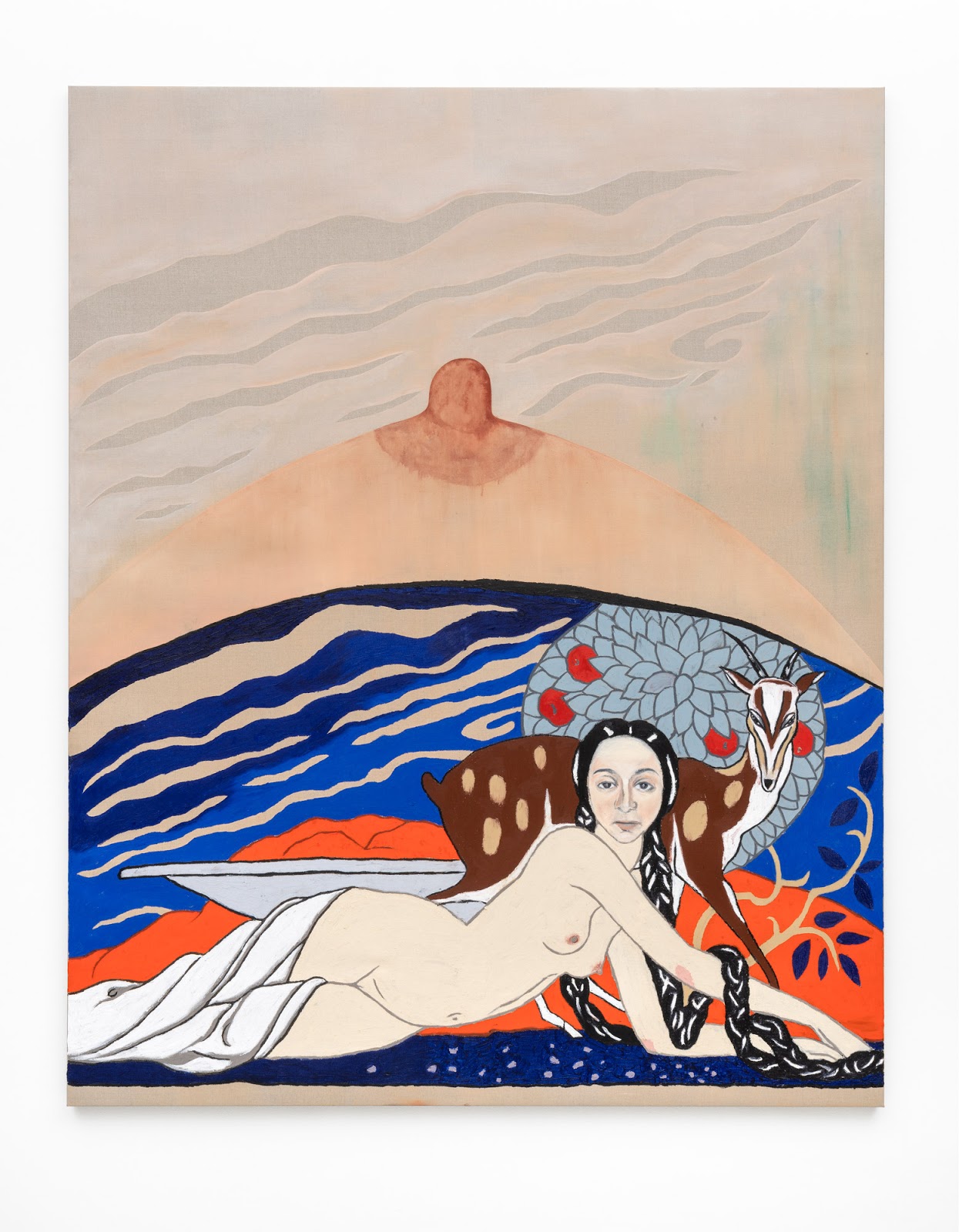 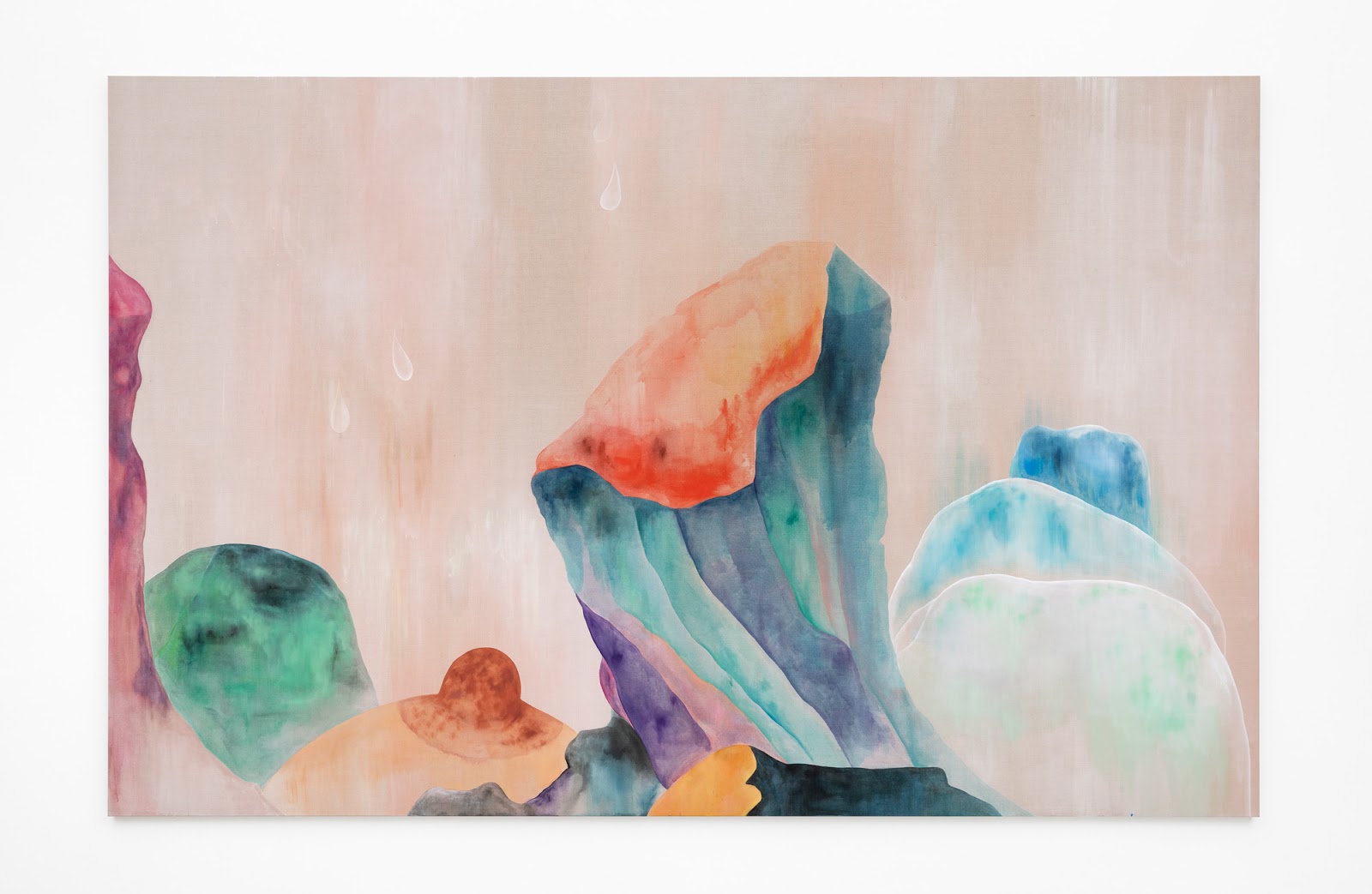 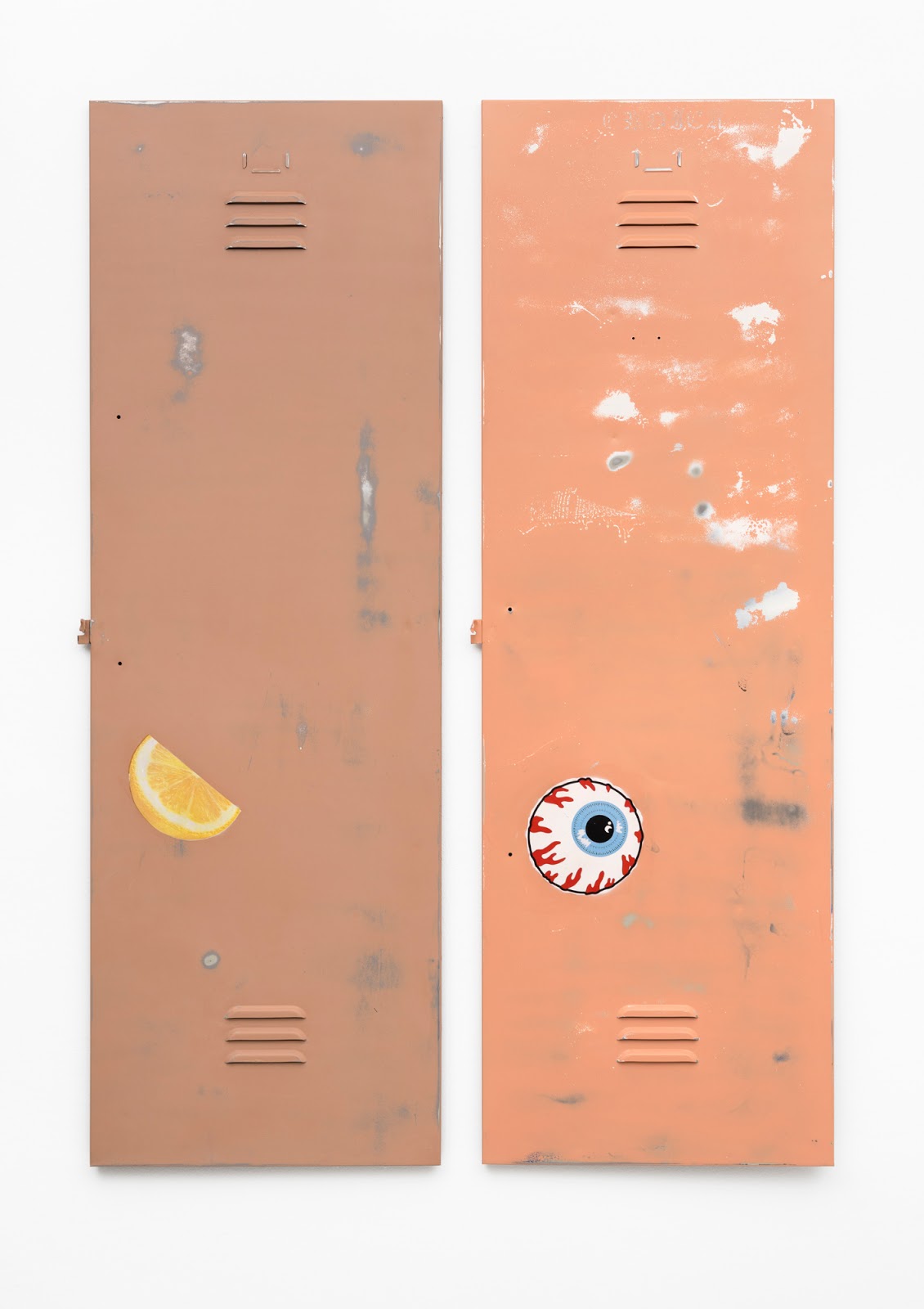 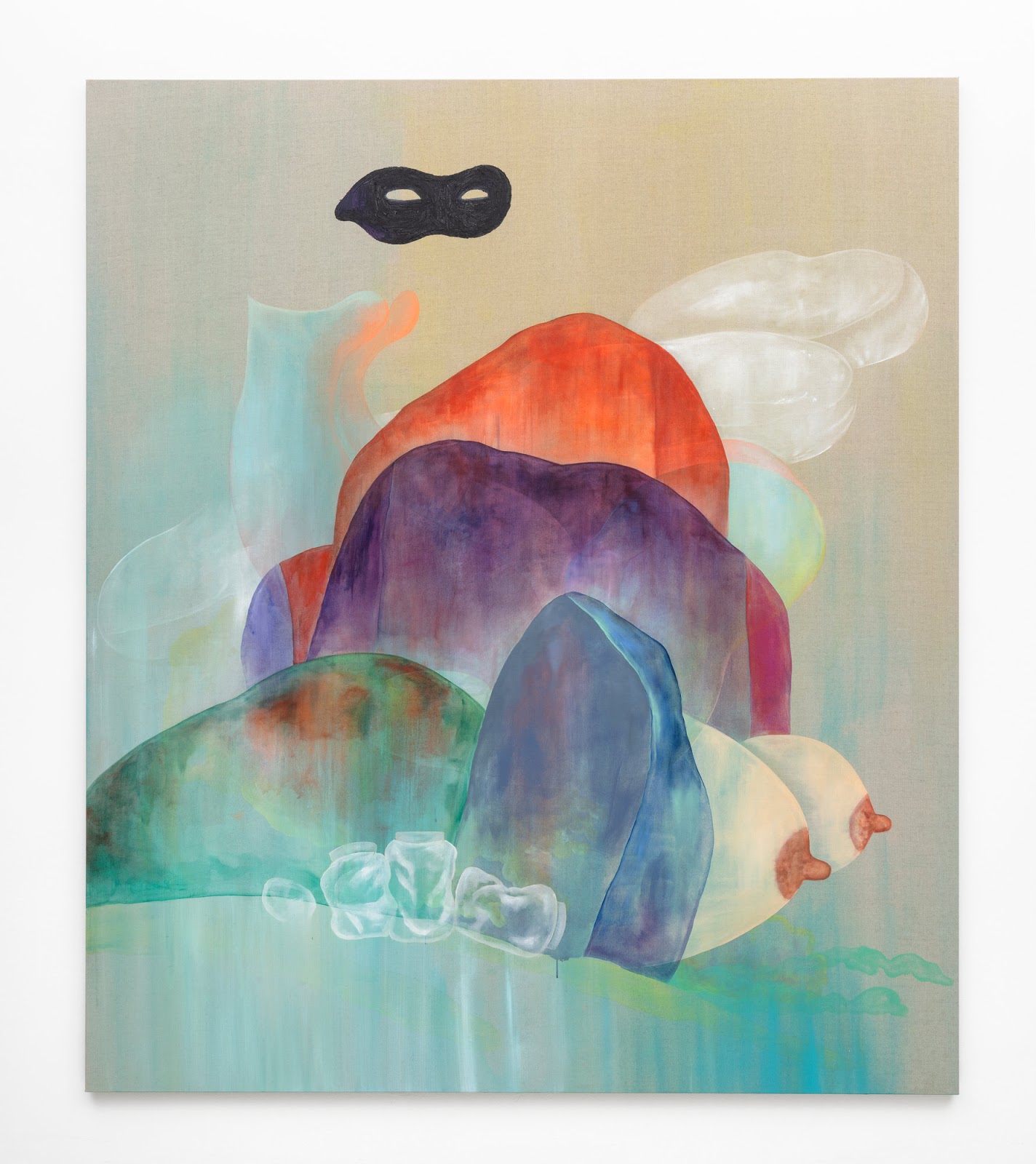 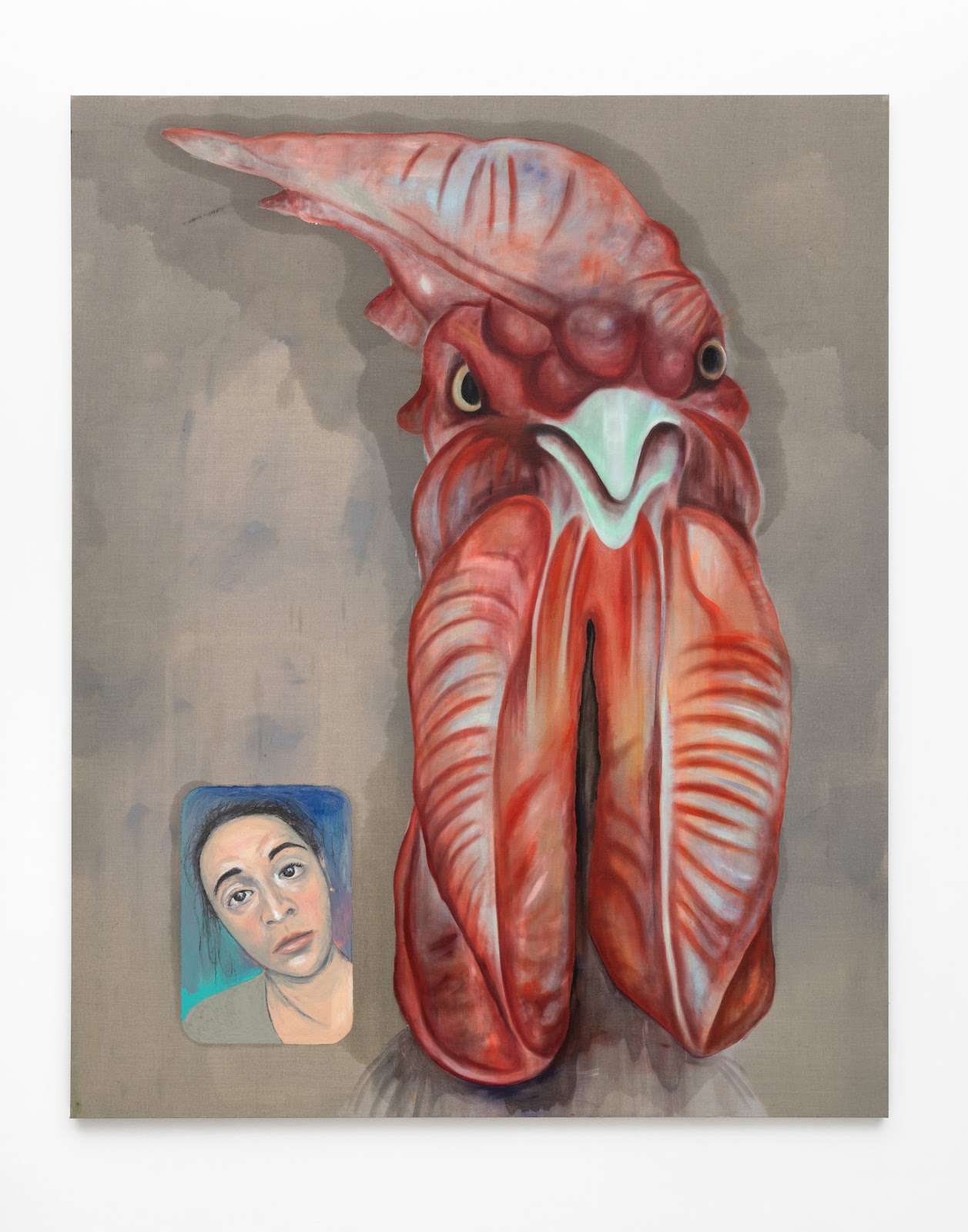 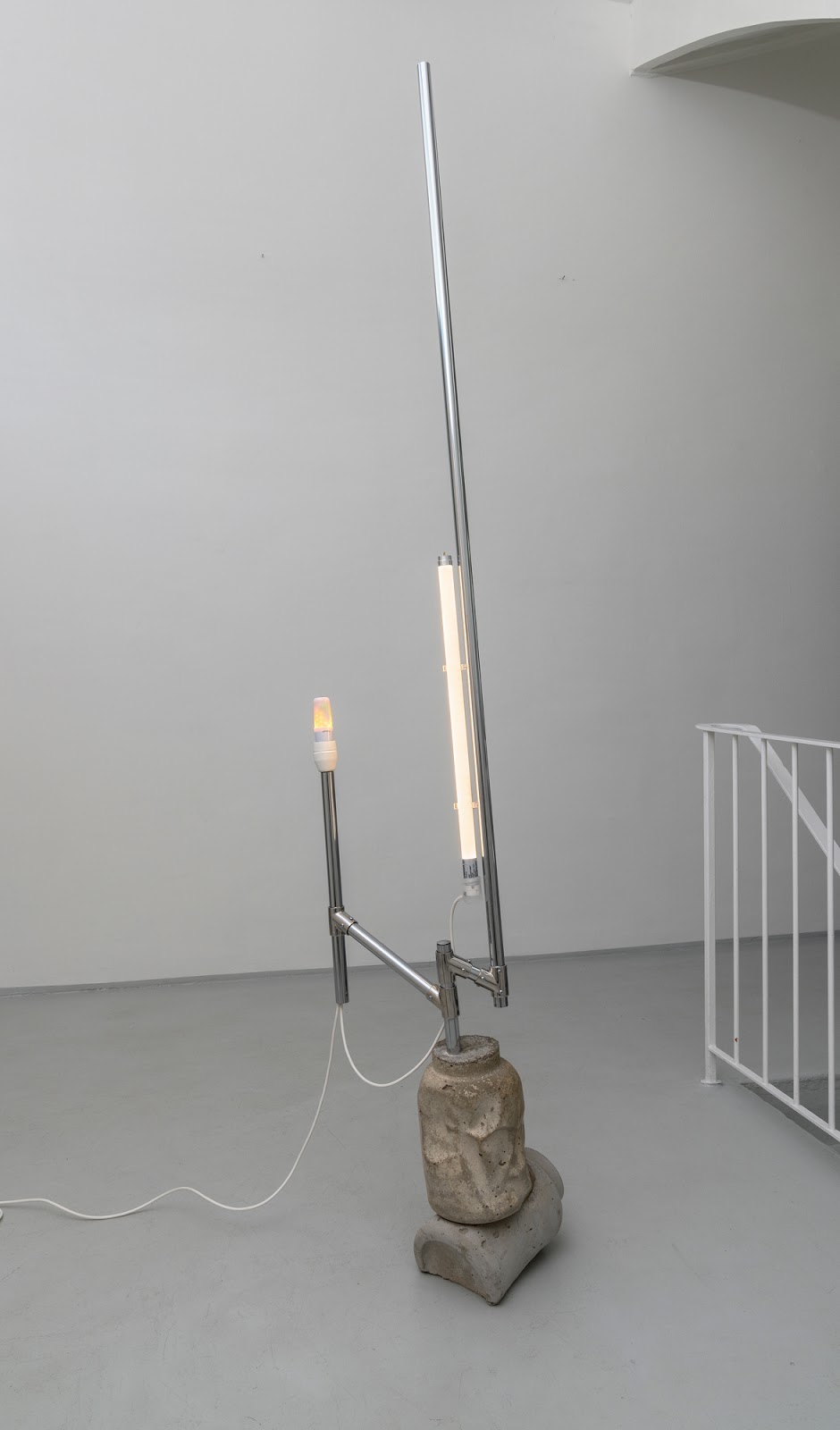 Jagoda Bednarsky and Felix Kultau are showing works together under the title PRETEND
FRIEND, with some of these created especially for their two-person exhibition. The artists
address gender roles and clichés in the media of painting (Bednarsky) and sculpture
(Kultau).

In Jagoda Bednarksy’s case, this concerns the image of a wife and mother, materialized in
her Shadowlandwork series in landscapes of rolling hills made up of breasts, in milk
pumps, vaginas, depictions of flora and fauna, figures from Greek mythology. The title of
the series is taken from the culture magazine “Shadowland”, first issued in New York in
1919 and bringing together contributions on visual art, film, dance and theatre as well as
Art Deco illustrations, caricatures, photographs and poems.

Jagoda Bednarsky’s compositions bring together visual elements based on a large
spectrum of source materials, with these individual components co-existing as equals in
the pictorial world of her paintings. Her mode of constructing images rests on the visual
structure of screen views and smartphone displays, which in some instances also appear
in her paintings as such. In all of this, her paintings have a lightness of touch that both
lends them authority and at the same time does justice to a contemporary perspective onto
an at times male dominated discourse of painting. Bednarsky’s depictions are frequently
rife with humor, irony and subtlety and caricature traditional role models and pictorial
modes. They reach their climax in the large format work Shadowland (Artemis), which
features a self-portrait of the artist as Artemis, goddess of the forest and birth, who here
appears as a protector of women and children. This is juxtaposed with a portrait of a
cockerel. In the oversized, frontal confrontation with the viewer it appears downright
menacing. Yet beside the machismo symbolism of the theme found throughout art history,
the way in which the animal is portrayed lends it a definite vaginal aspect. The otherwise
hypermasculine cock becomes emancipated through transformation and lampoons the
purported duality of the sexes. The artist puts herself in the picture alongside the rooster in
the shape of a FaceTime portrait.

In contrast, the works on view by Felix Kultau create stereotypical images of masculinity:
His light sculptures placed in the space employ concrete cast protein powder cans,
chrome-plated steel poles and strip lights. They evoke associations of bodybuilding: in
terms of shape they are reminiscent of gym equipment, as well as of physical
constructions subjected to (self-)optimization.

Felix Kultau works primarily with cool, industrial and found material, emphasizing their
fetish character through his interventions. In their perceived smoothness his materials
nevertheless time and again exhibit traces of decay and vulnerability. His locker doors are
a continuation of his work series on shipping container doors. In the exhibition they
become part of the idea of the fitness studio, but in contrast to the demonstrative, large
gestures of the chrome sculptures they instead express privacy and withdrawal, qualities
that also stand allegorically for adolescence – our view of which is of course shaped by the
genre of the Highschool movie.
Next to these works, viewers see themselves confronted with a solid wood sculpture that
reflects the final outcome of male fantasies of power and violence: What we can
appreciate in detail here is the trace of an application of force onto the wood beam. Felix
Kultau’s sculptures seem at the same time fragile and brutal, they exude an inner conflict
and fragmentation, much like that described by Klaus Theweleit in his notion of the
“Fragmentkörper” (fragmented body). “This body, which I call the fragmented body, for
example does not abide equality – whether this be equality with women, equality with
children”[1]. These deliberations stem from the author’s principal work “Male Fantasies”,
first published in German language in 1977 (English language version 1987), which now,
40 years later, has been re-issued due to its unchanging, if not increased relevance to our
times. The author sees the fear of a dissolution of the body as the root cause for the
development of hierarchies, fascism, abuse of power and violence: “And this fragmented
body attempts to solve its problems, which it is unable to integrate into its psyche, through
violence. (…) This type wants society to be organized in a hierarchical way, with clear
superior and inferior distinctions, and to know its position within this structure. And this
type sees men, a certain kind of masculinity, to be superior in this construct.”[2]

In the Jagoda Bednarsky and Felix Kultau’s exhibition this duality of traditional gender
roles is expressed – hypermasculinity and machismo vs. matriarchy and motherhood –
and at the same time punctuated and irritated time and again. The two artists’ works
complement, cite and comment on each other. They coexist in analogue and digital space,
as though they were defending their own position in their interaction. As pretend
friend (much like an “invisible friend”) they demonstrate their independence while
simultaneously being stimulated by the knowledge of each other’s existence. The
hierarchies are revoked, the battle of the sexes abates.