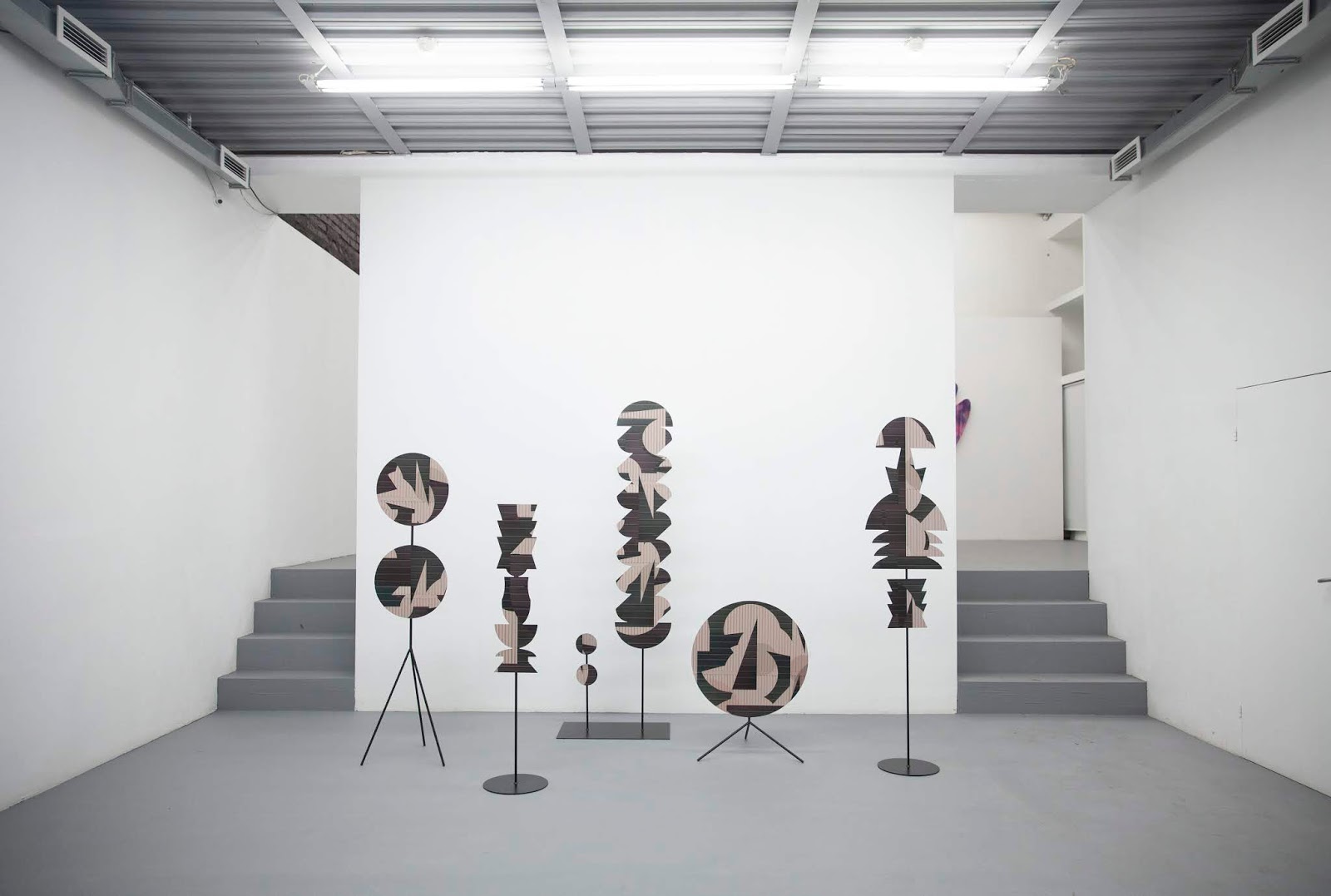 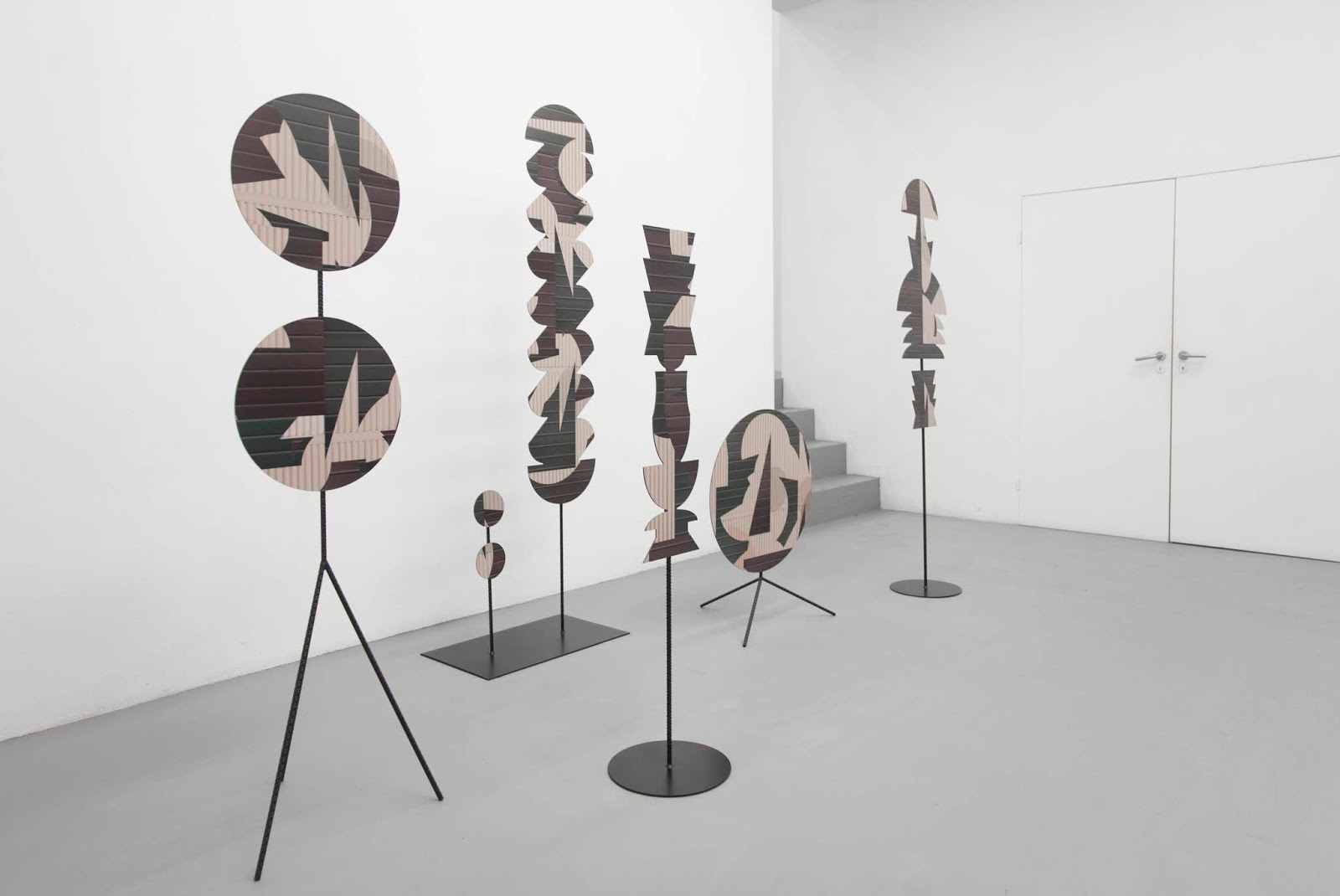 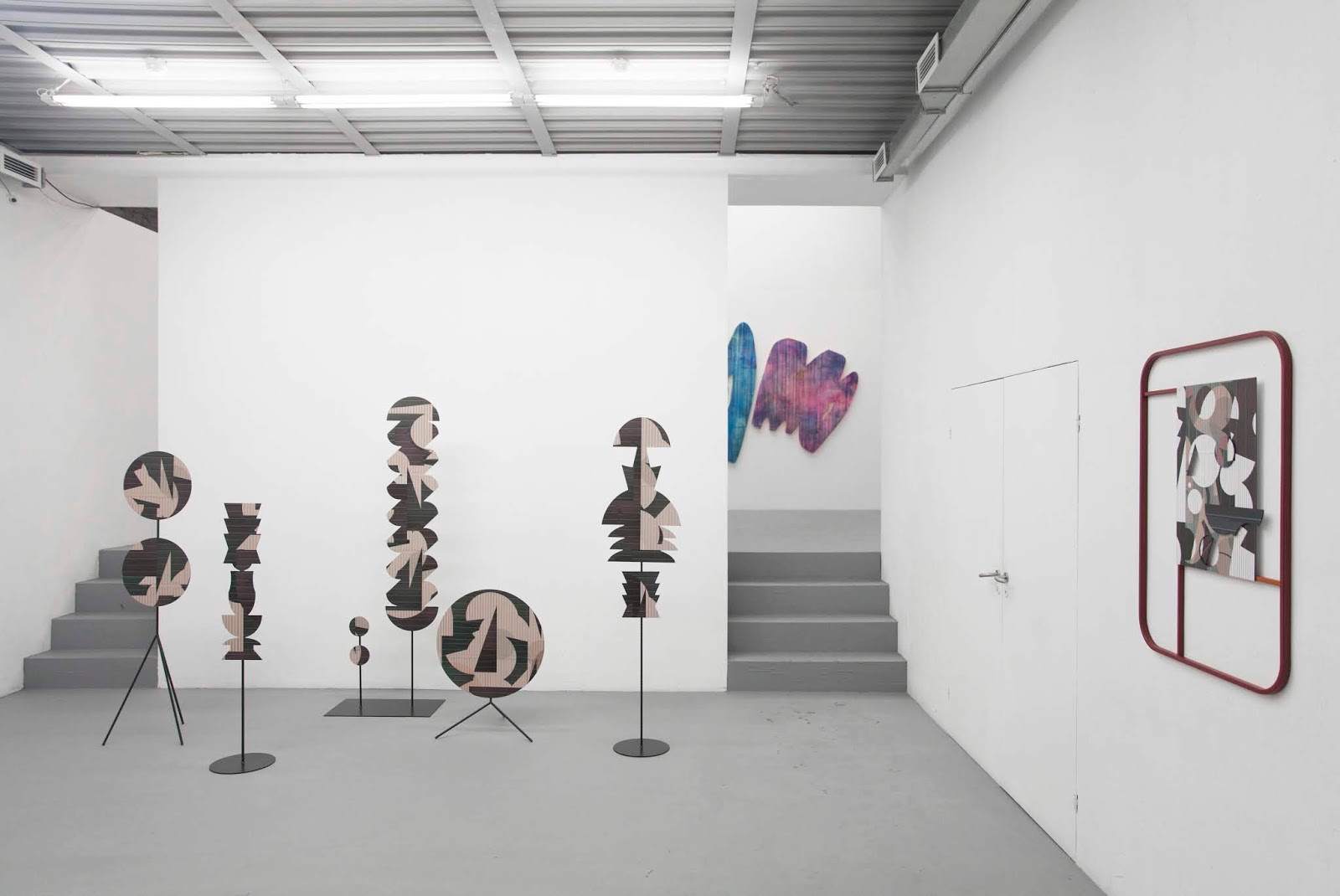 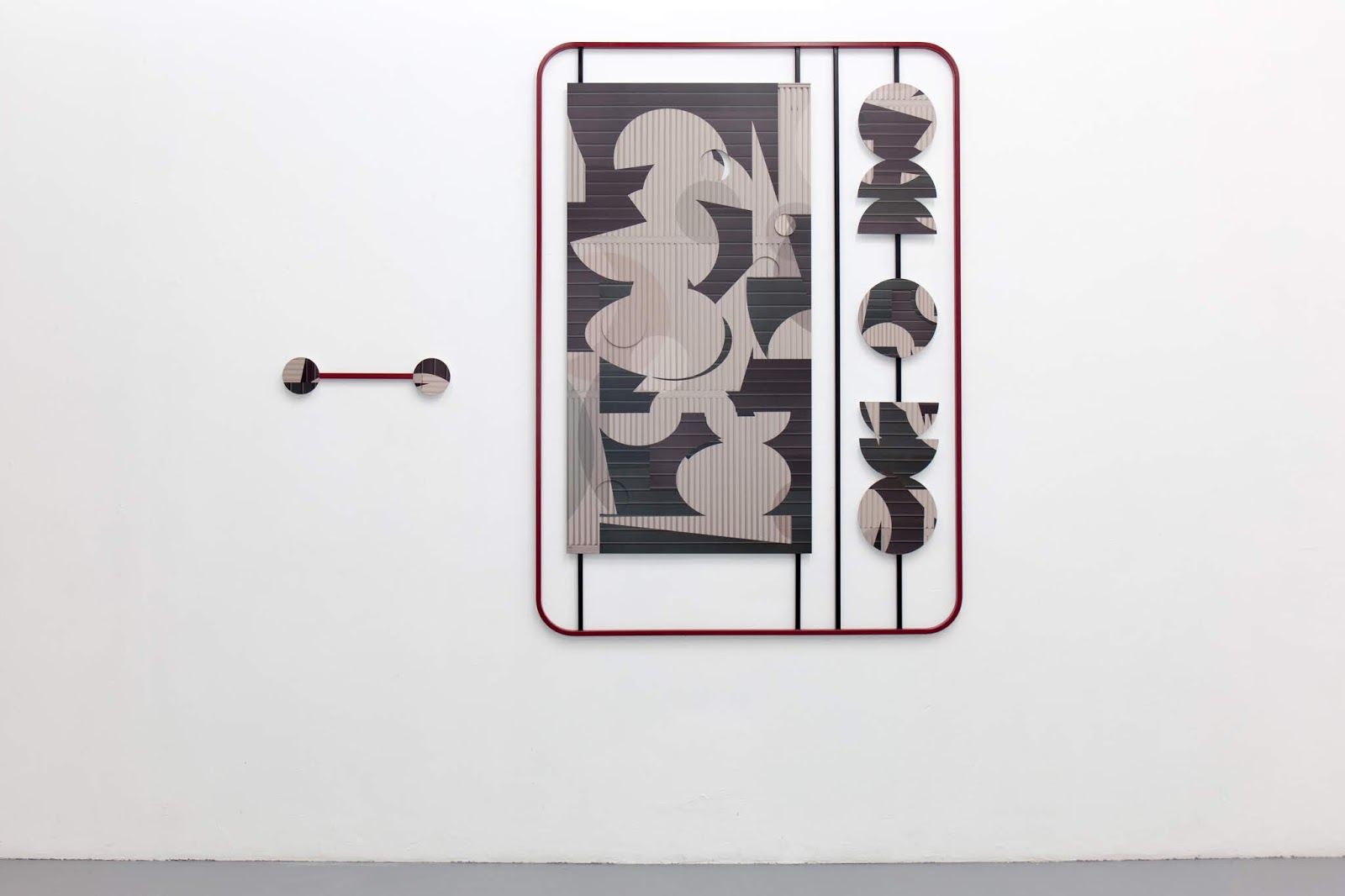 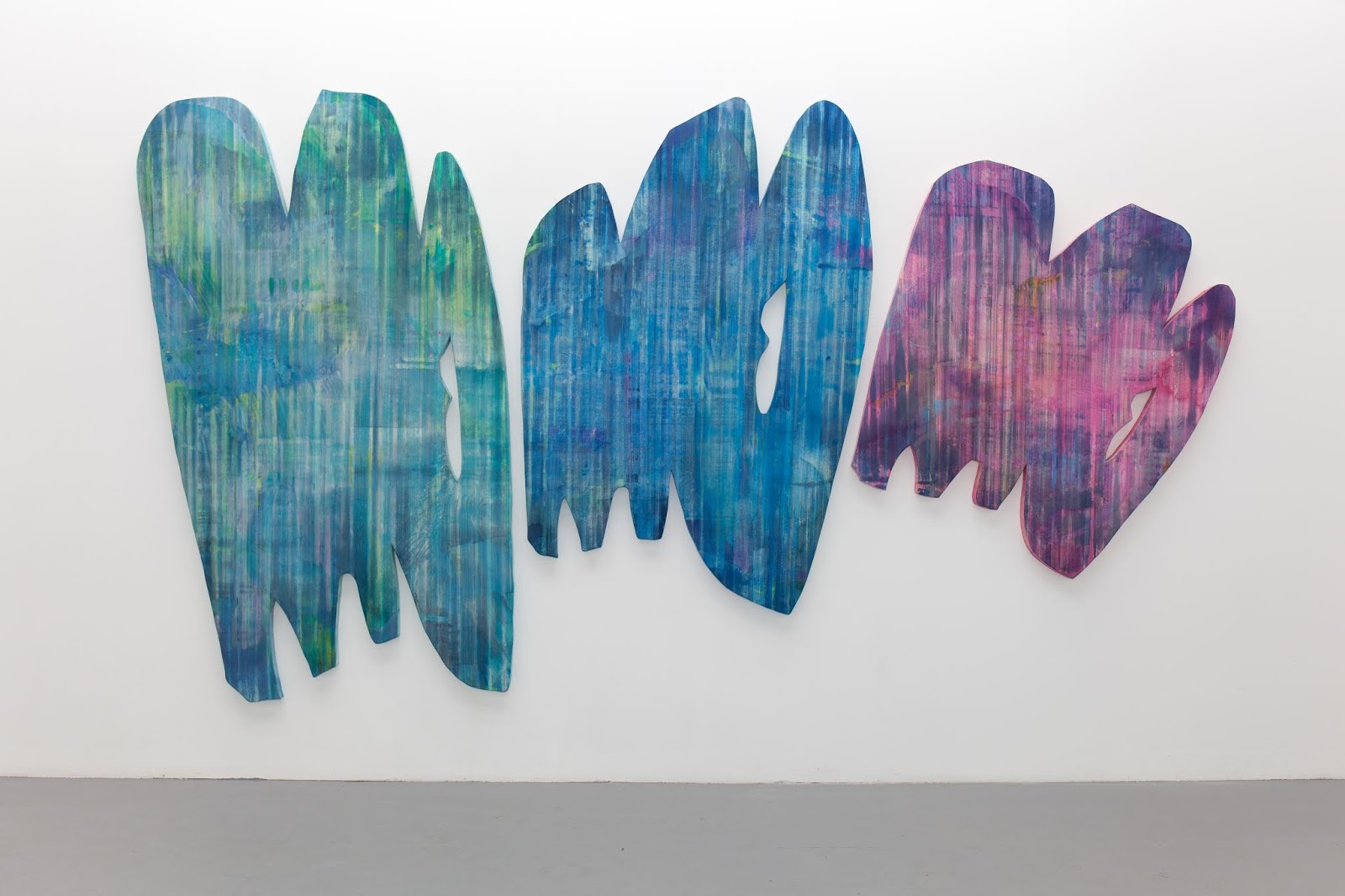 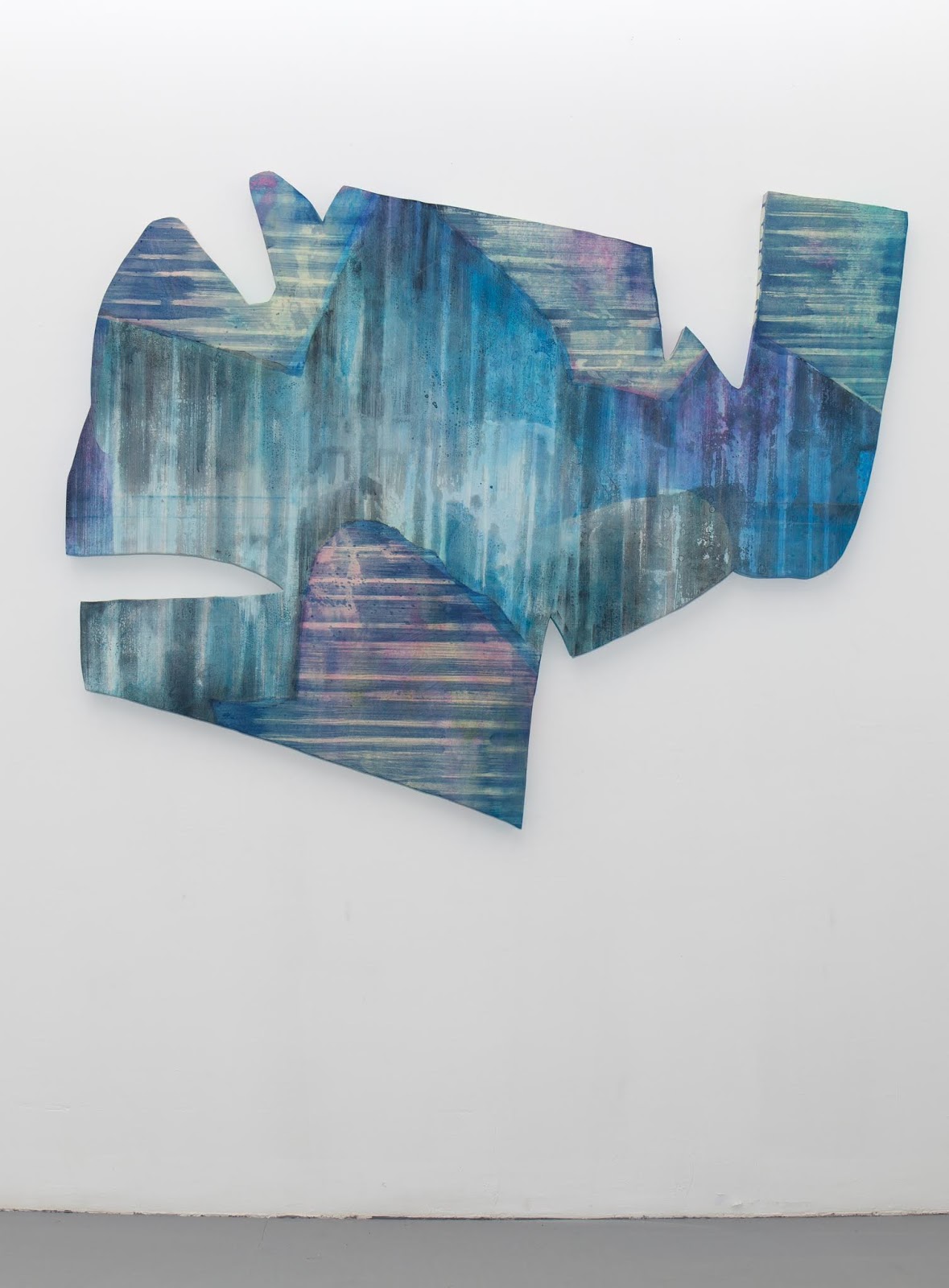 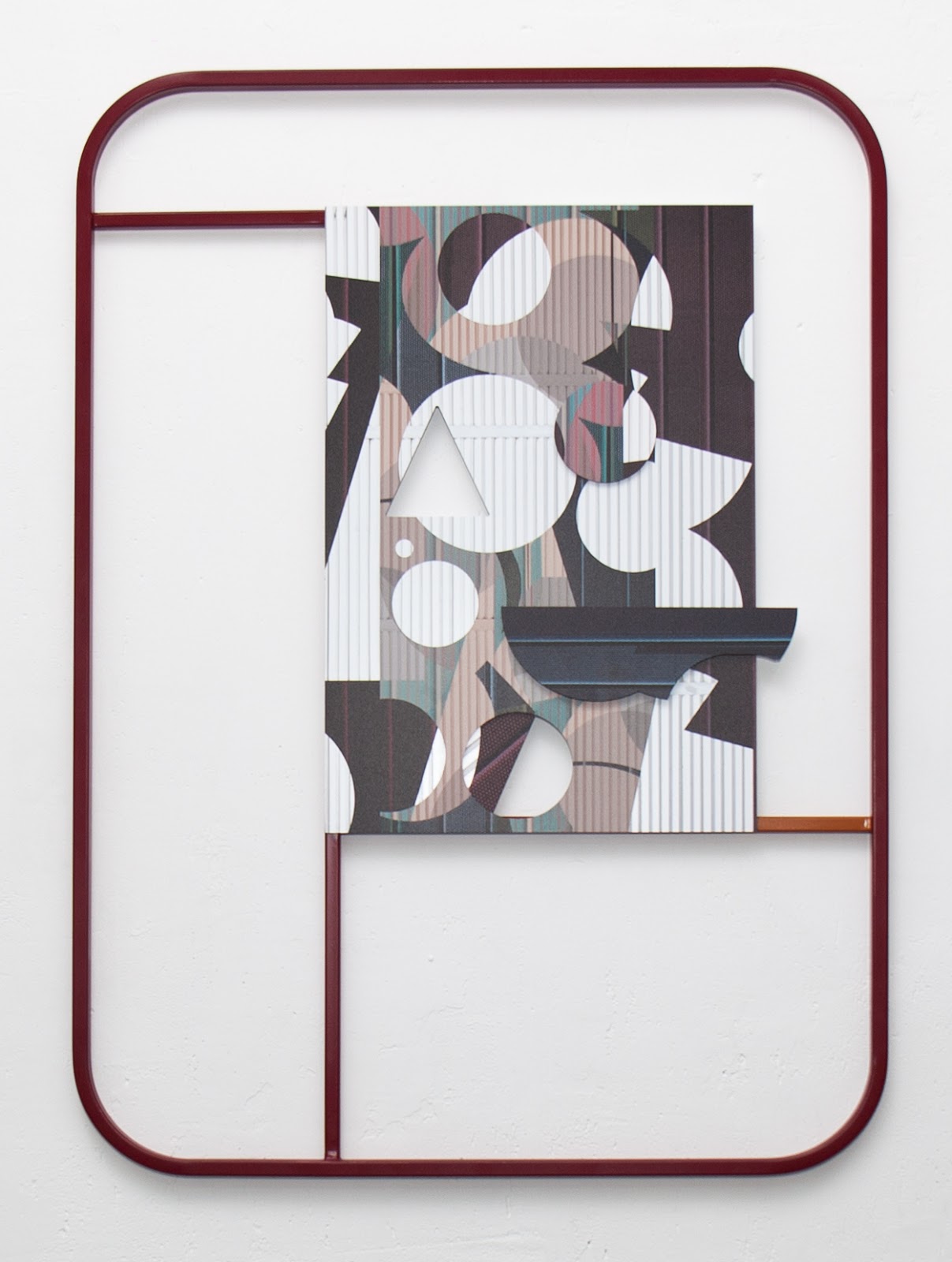 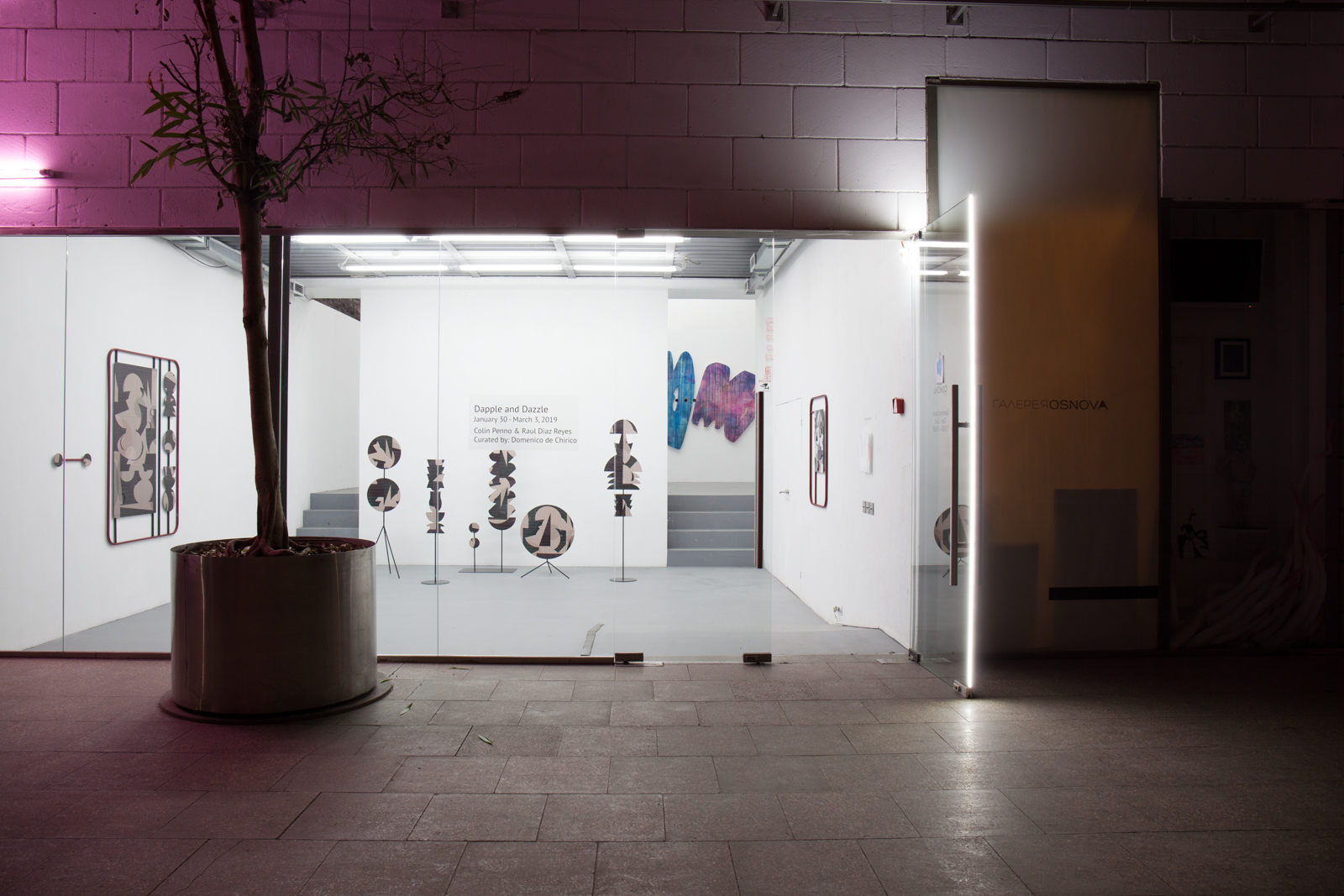 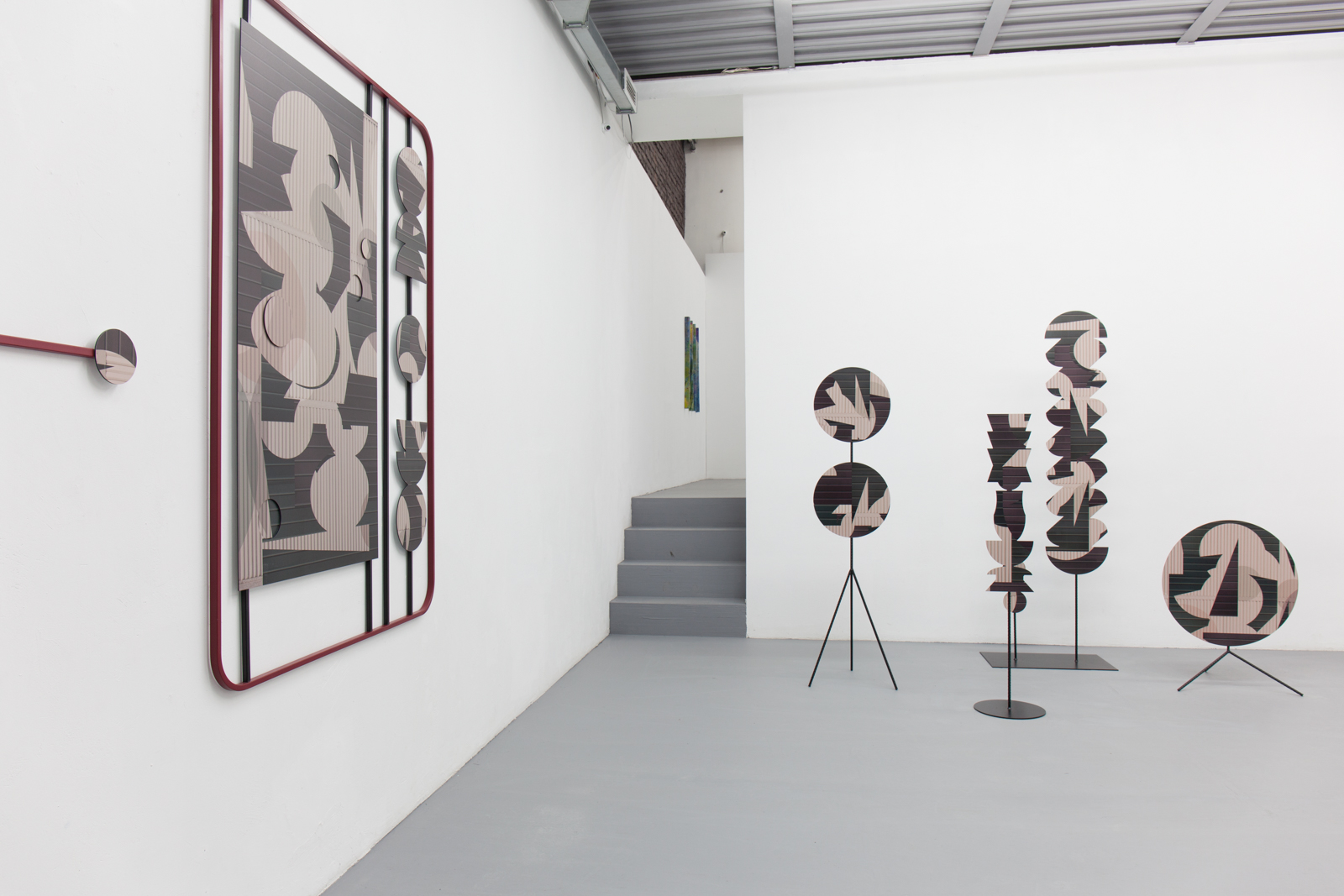 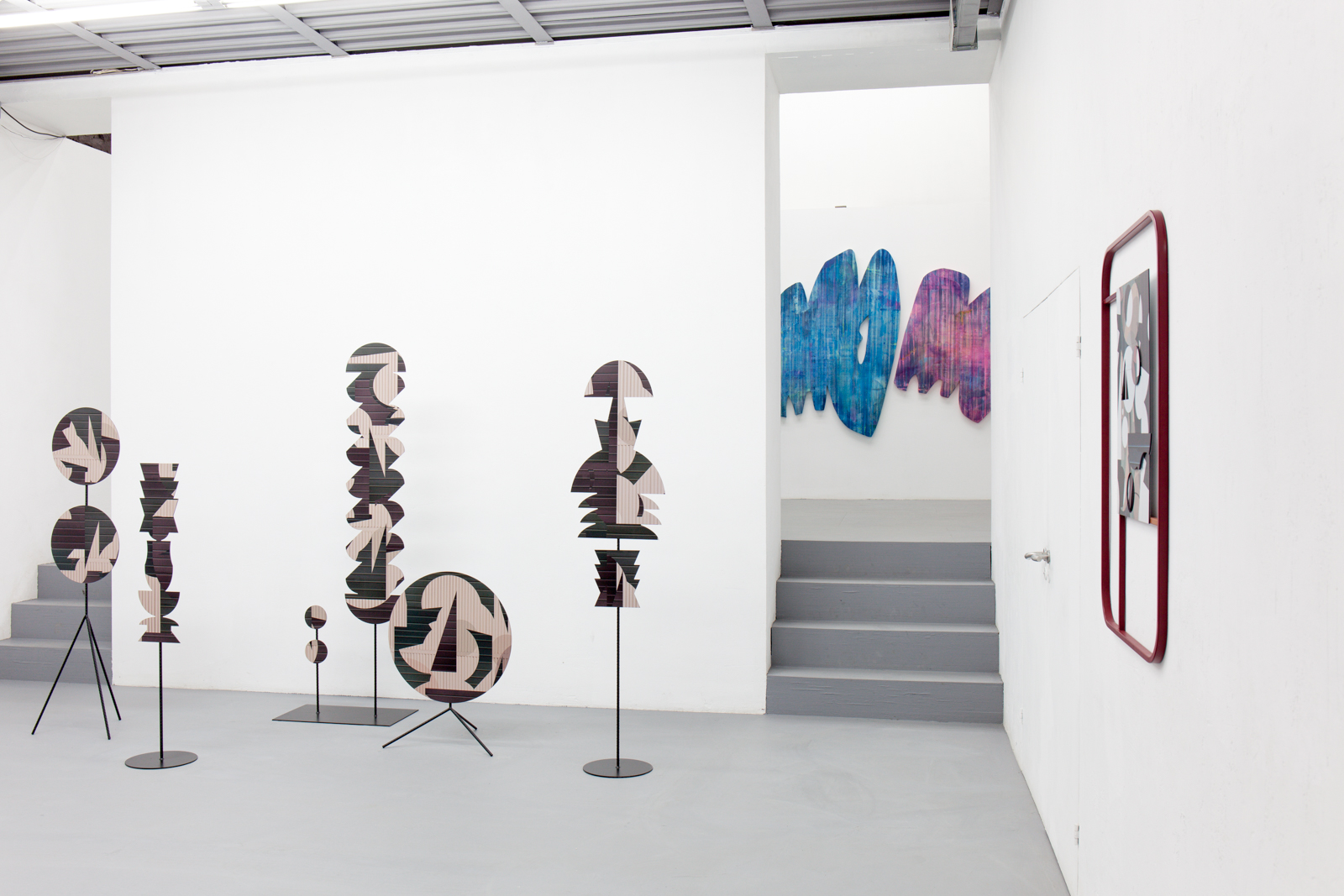 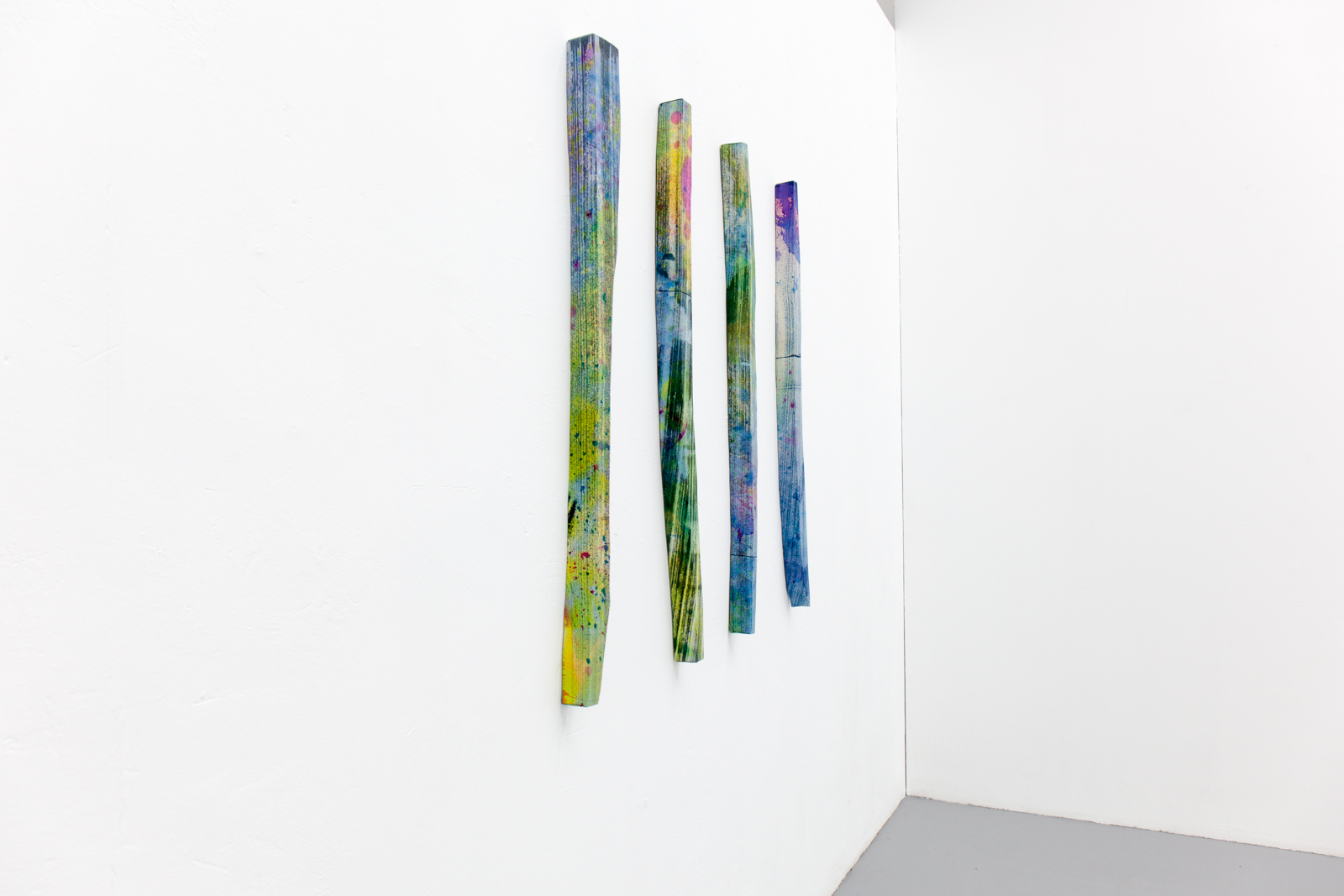 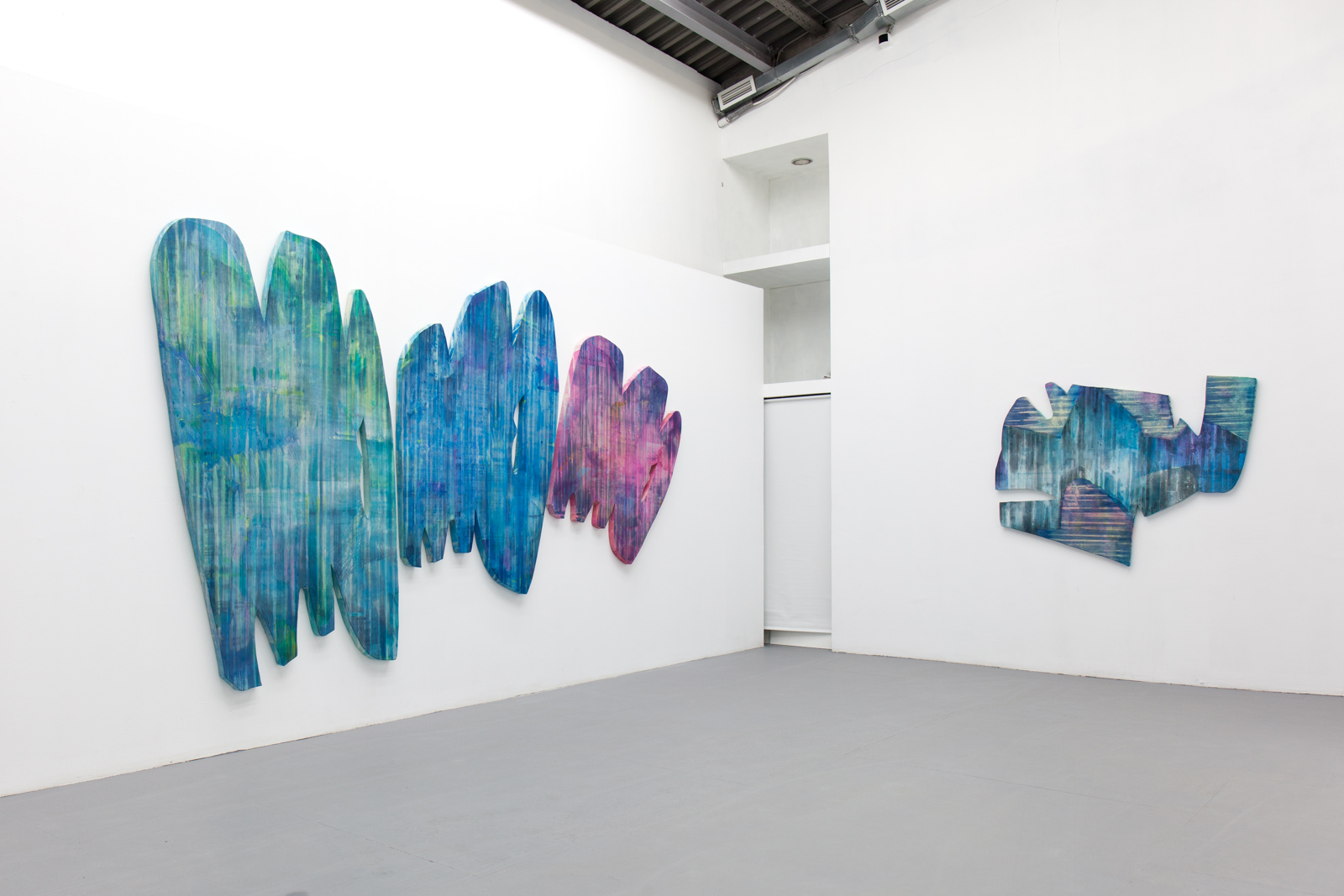 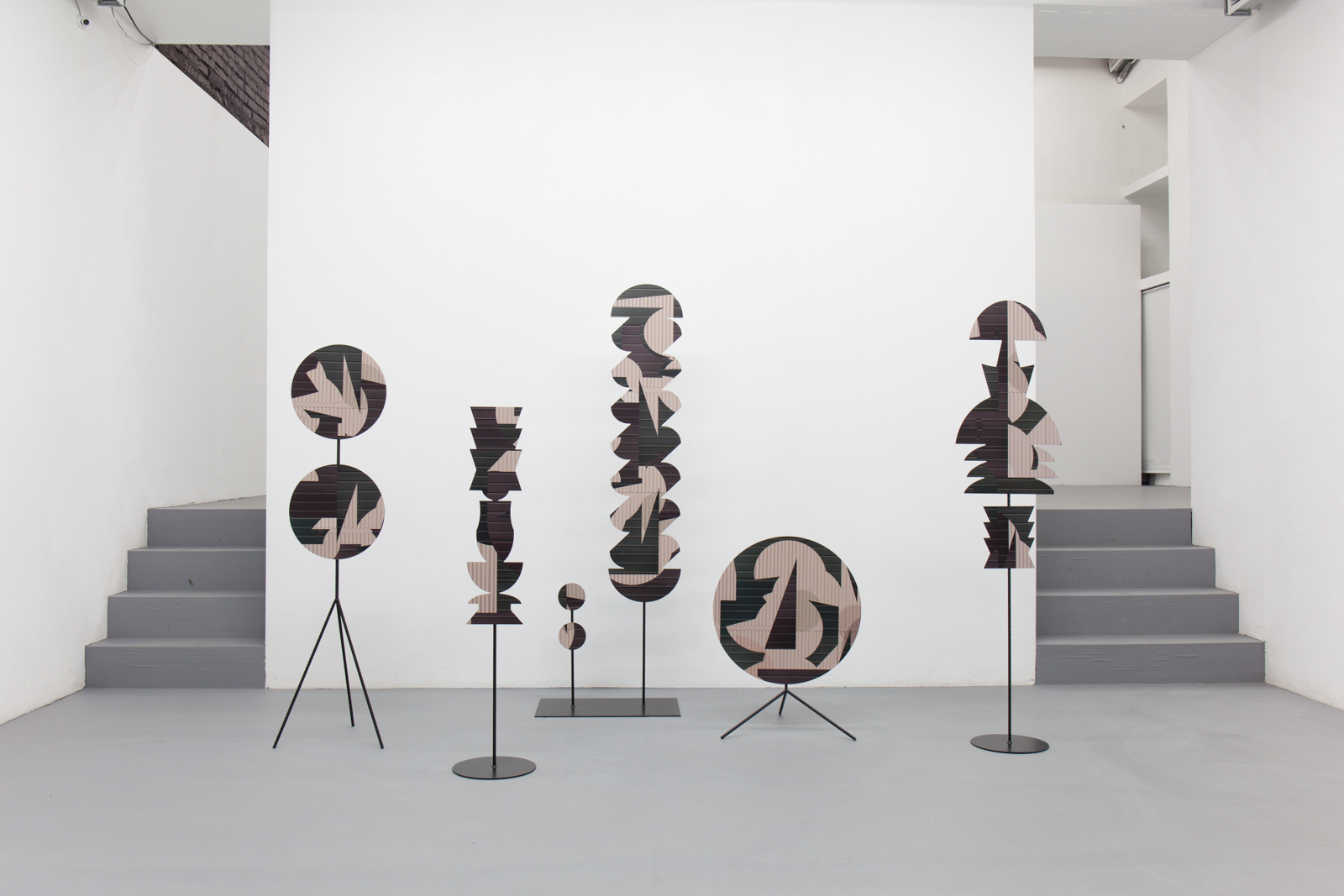 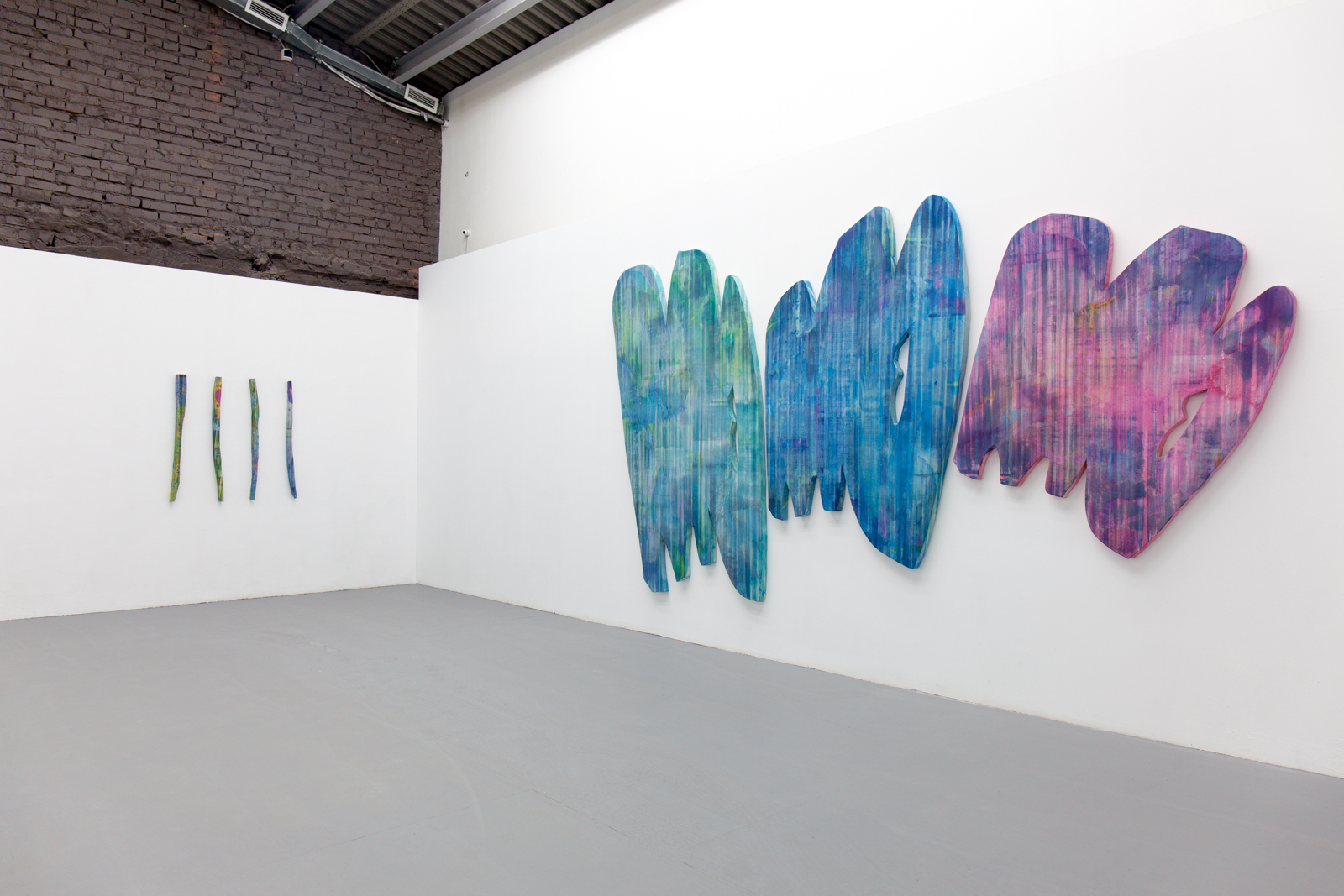 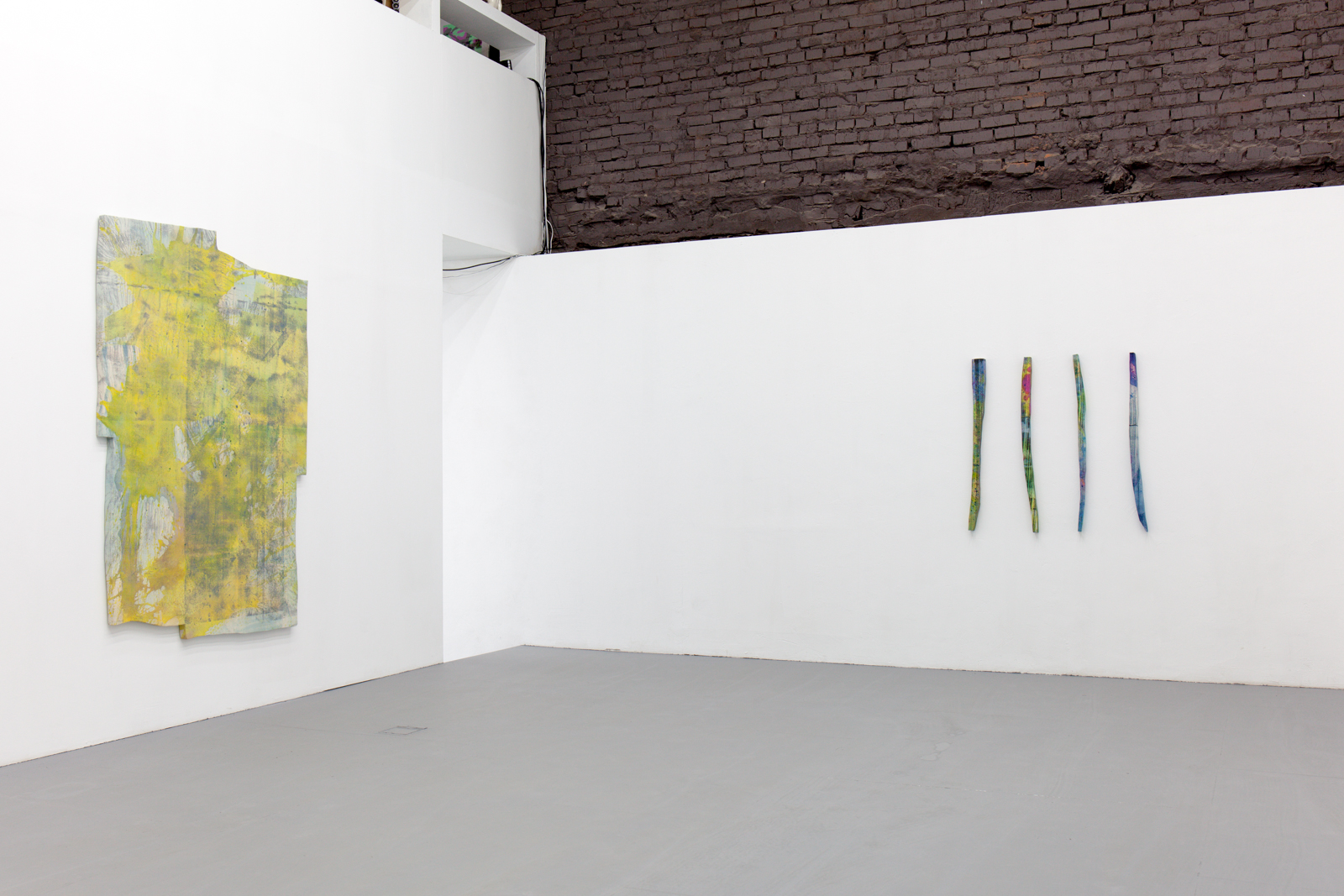 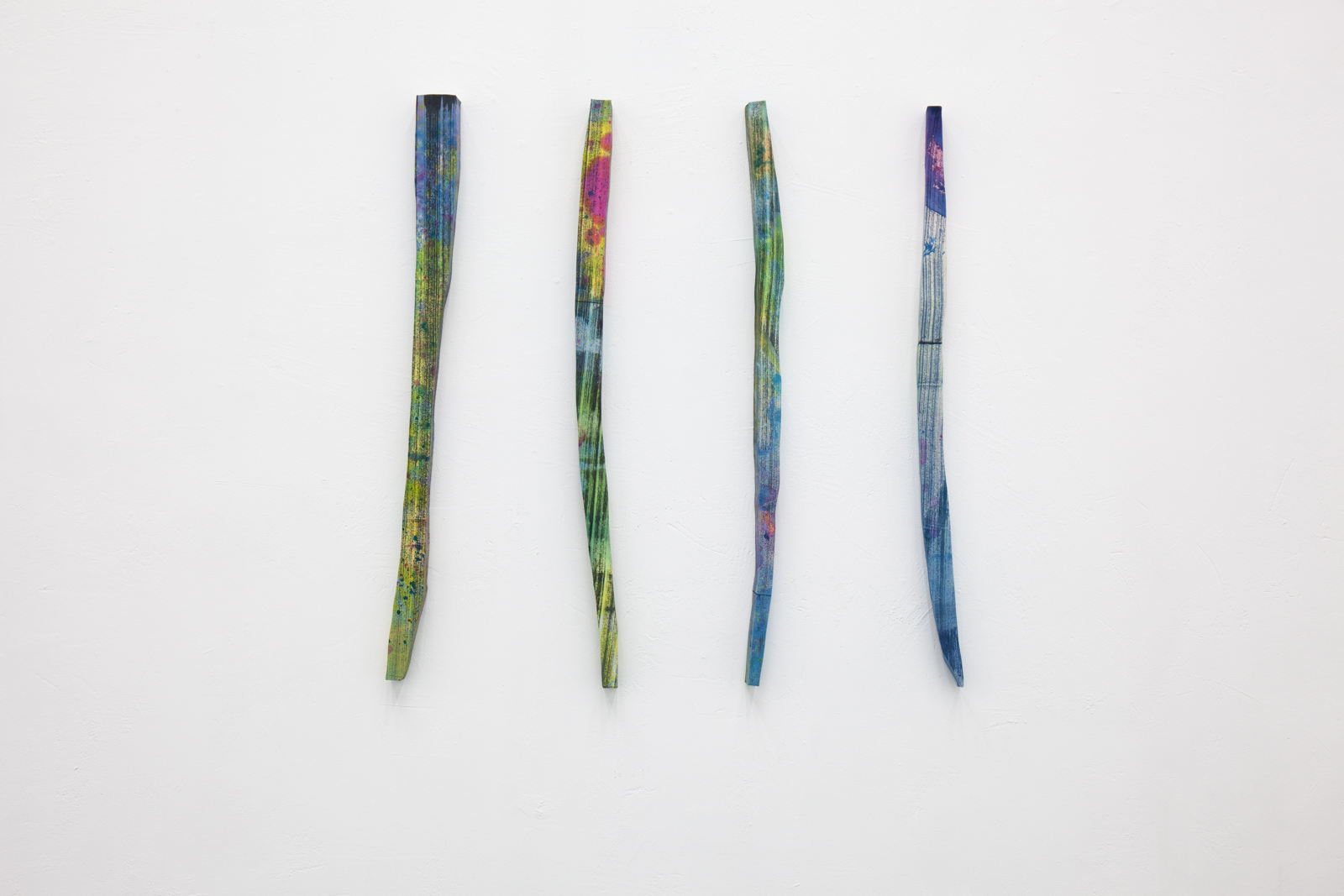 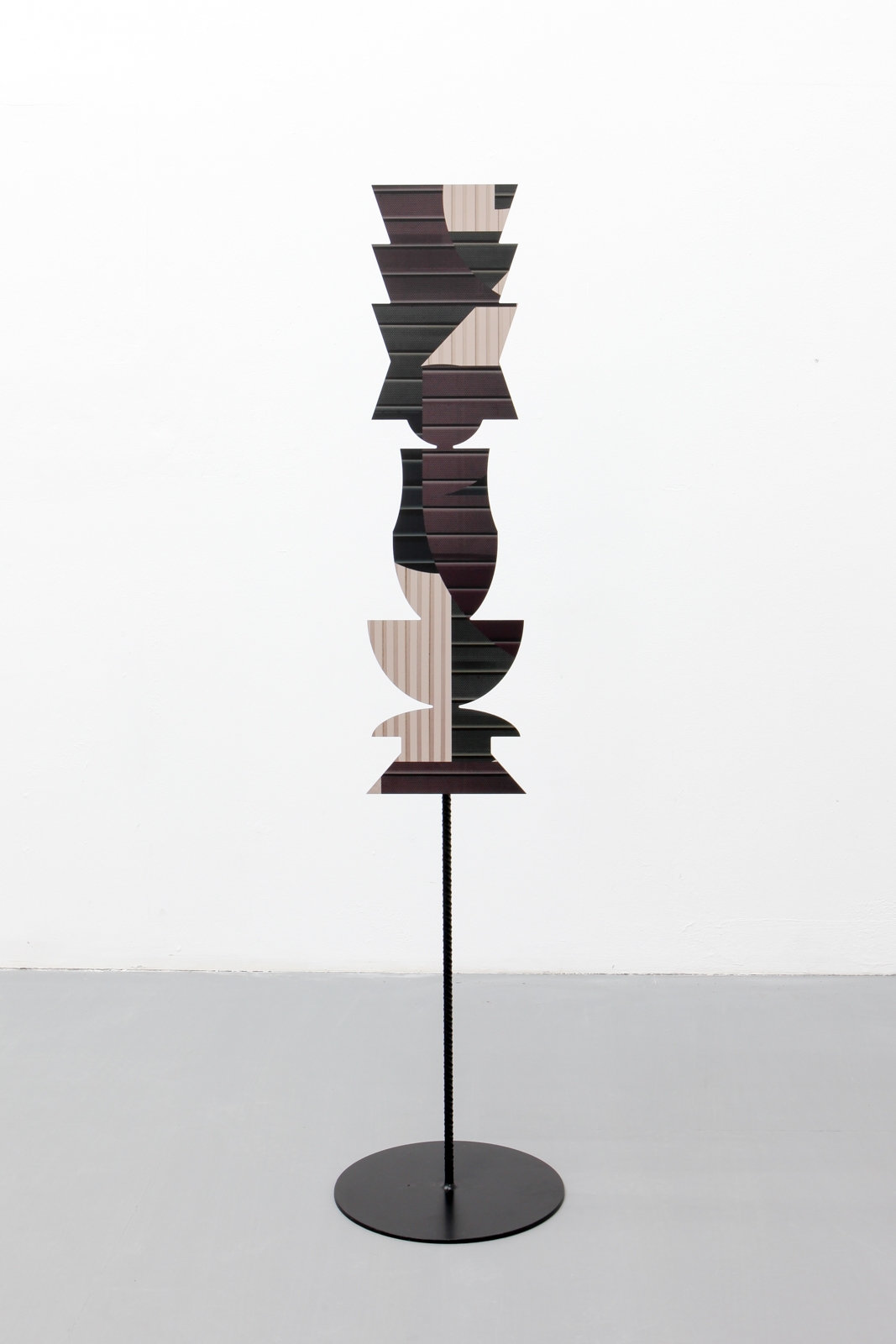 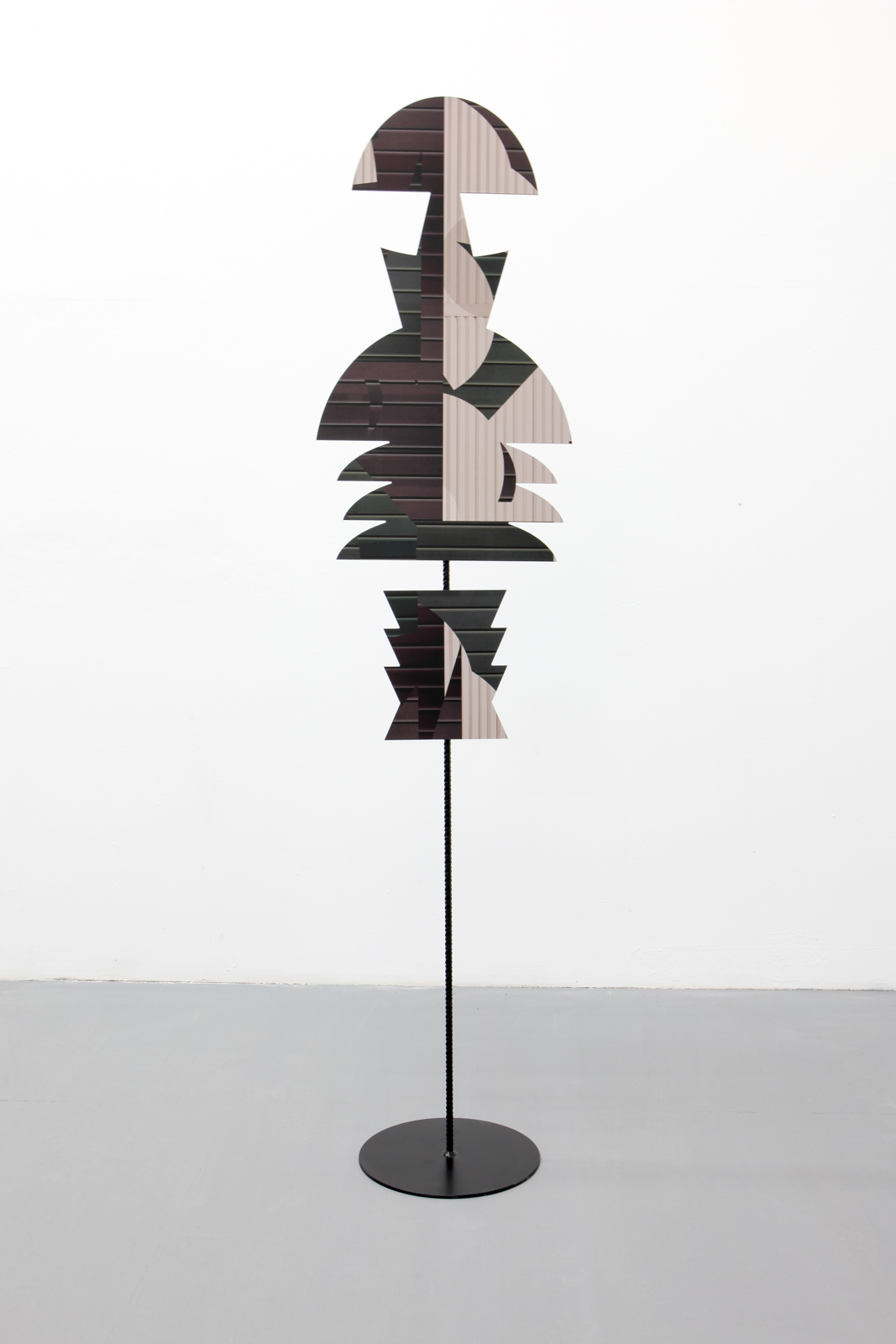 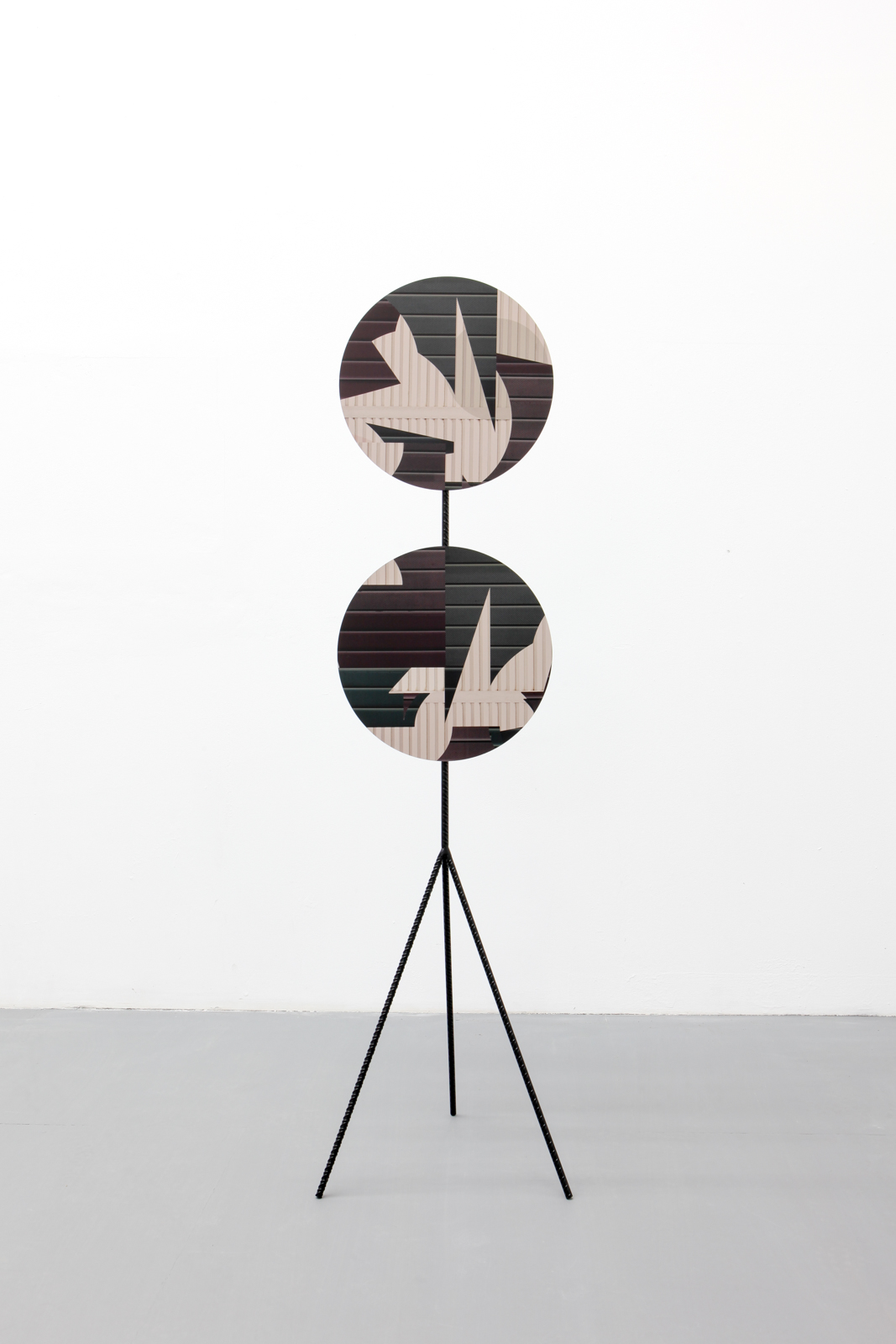 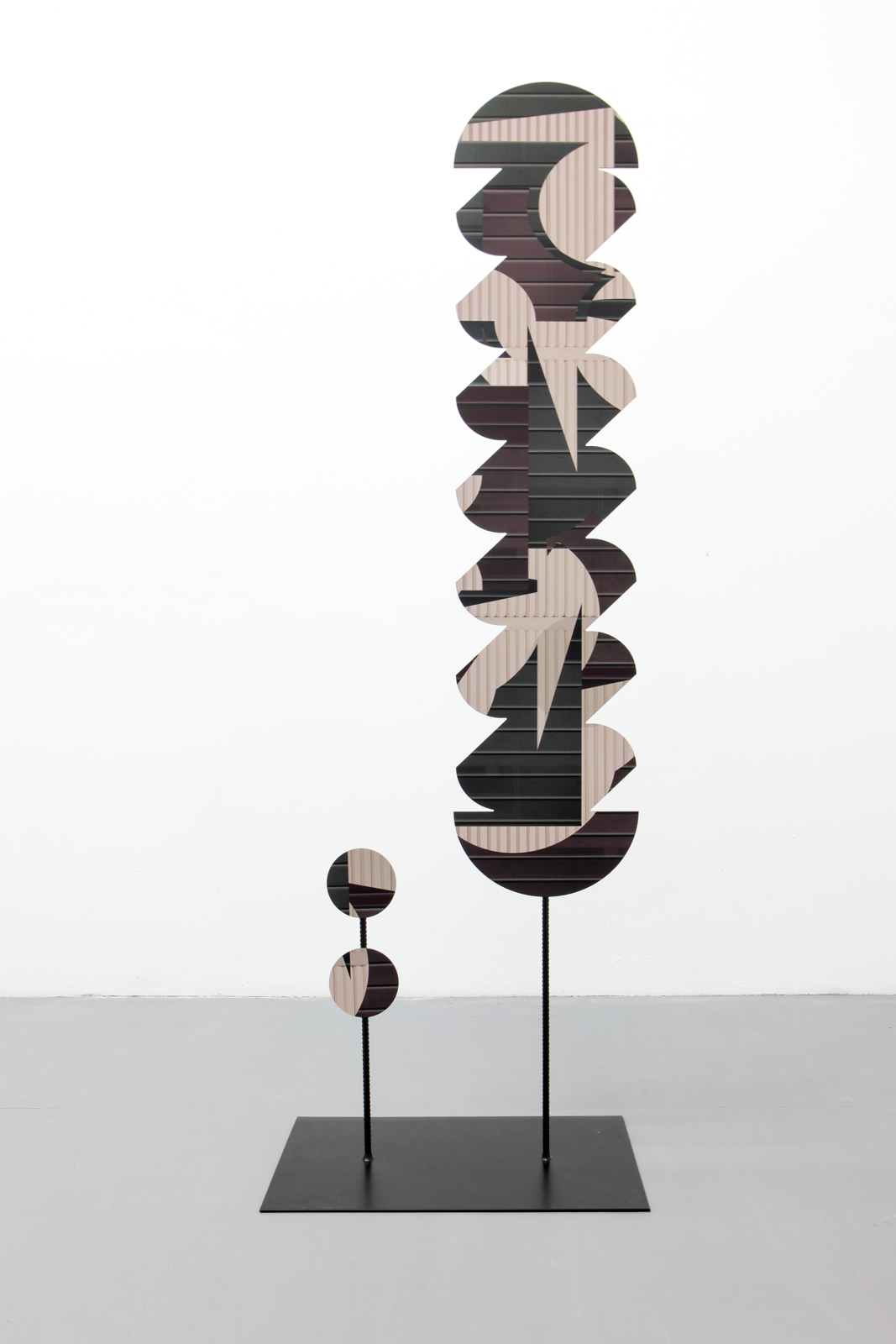 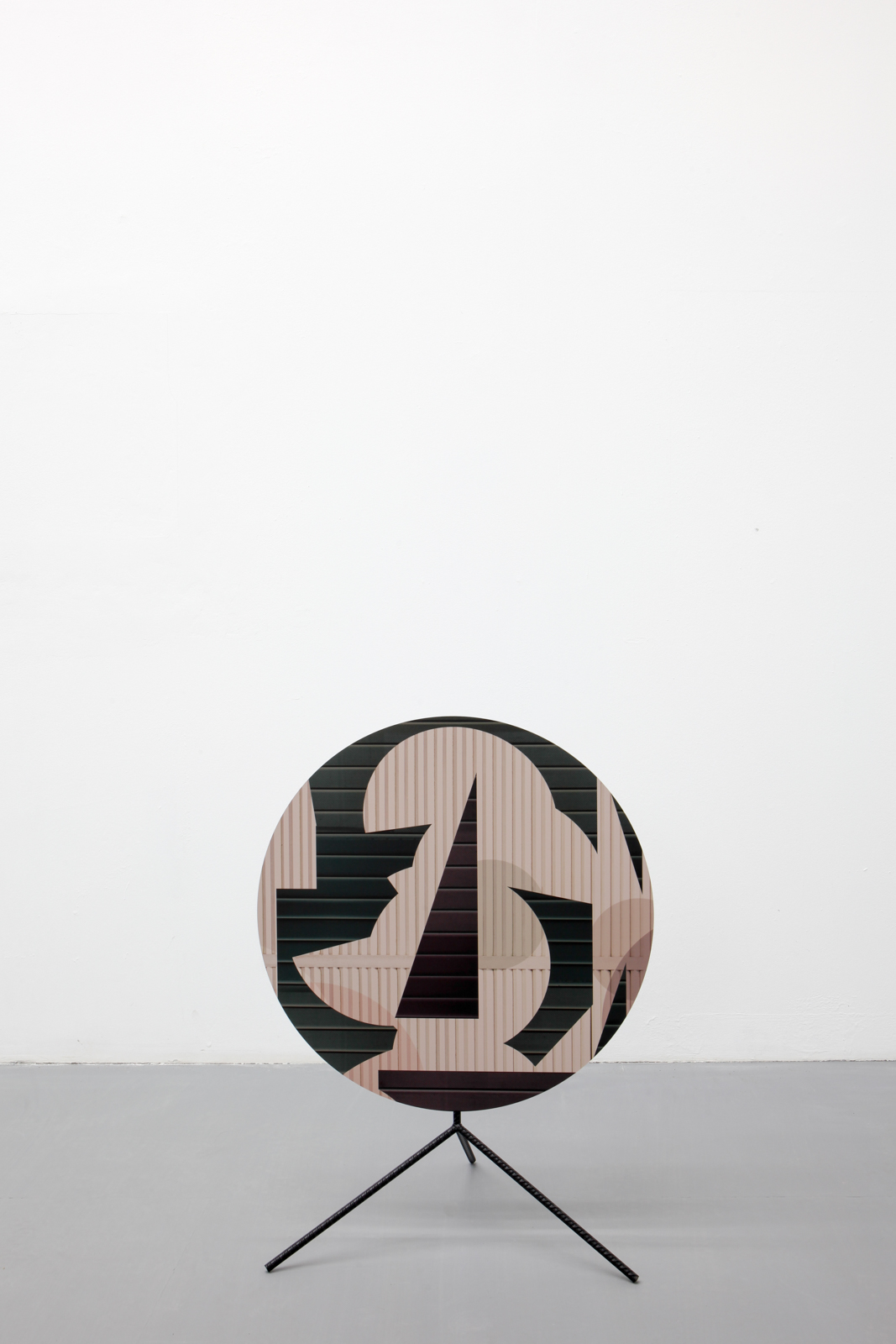 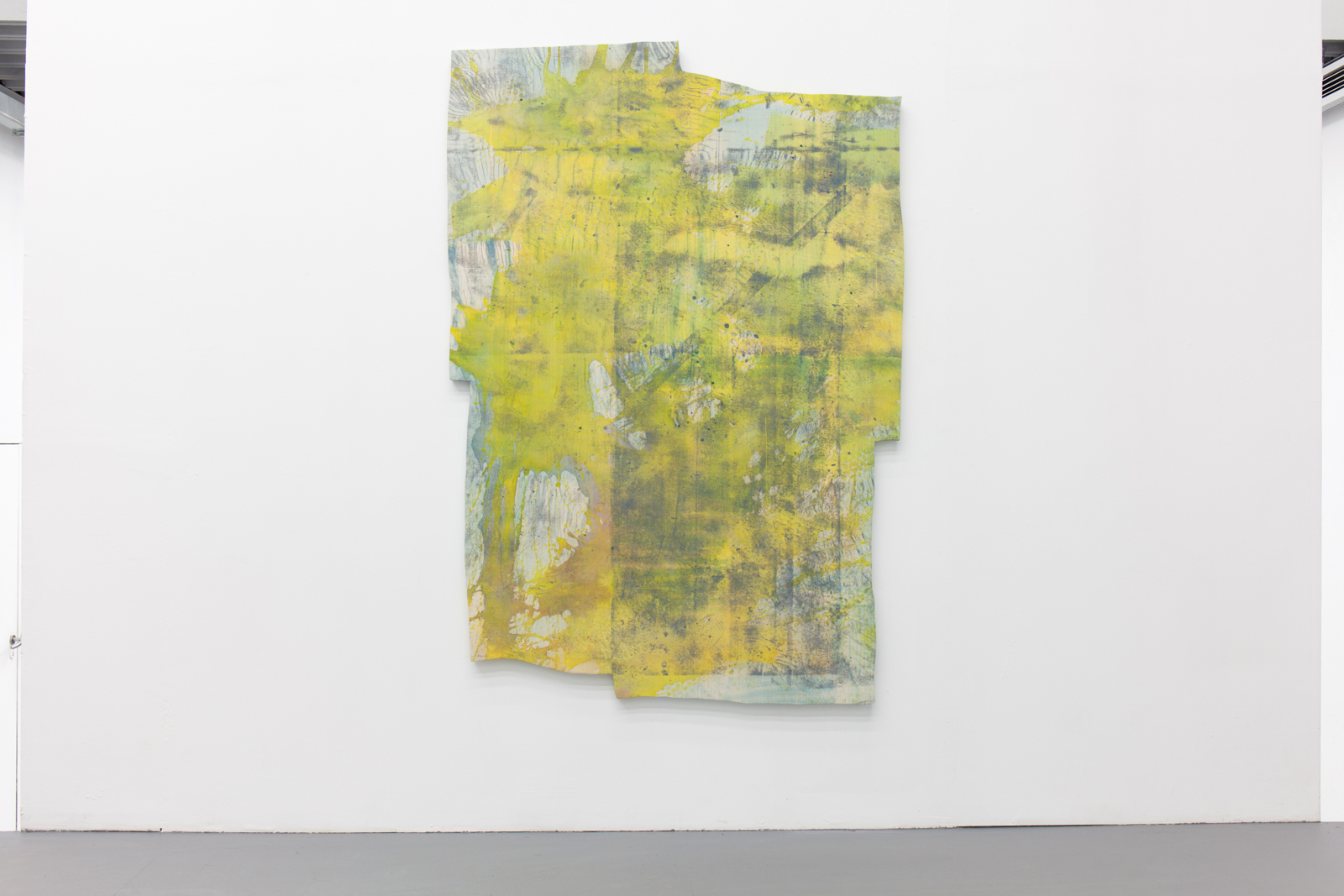 Etymological meaning of the word «Dapple» is «differing in color». Thus we should focus on the dialectic of the infinite visual work. What makes dapple a dapple is not a dapple itself, but it’s distinction from what surrounds it. From this point of view, art gesture (only exists as a result of other art gestures’ existence or vice versa due to its’ absence) exists only because of the existence of another art gestures or their absence.

Dazzle, represented in one of the works, is etymologically dual: it origins from the word «to change», and it is the changing of perception that makes a dazzle. Works by Collin Penno and Raul Diaz Reyes, presented at the exhibition, continue this constant dialectic, incorporating it with the dialectic of space exploration, which in its turn creates third round (circle) of dialog between two dualities: form and space.

This never-ending search of relations between color, form, space and subject, which occur on the verge of or inside the work, seem to fully support the fundamental idea of «difference» formulated by French philosopher Jacques Derrida: everything that exists is always decentralised in comparison with itself and, therefore, mostly cannot be expresses with signs. Sign system, visual, in this case, is understood by Derrida like «bundle», tangle of feelings or power lines, constantly searching for balance between the line and its own dimension. Distinction of elements turns out to be the powerhouse discourse, that finds its personal, closest to reality, meaning in its states’ dissimilarity, (being constantly uncovered and drawn nearer) numerously times uncovered and numerously times zoomed on.

The energy of contradiction in Collin Penno’s work, which might occur in comparison between three-dimensional form and colorful «formulation», is filled with most certain meaning of word «difference». The never-ending sound occurs from this contradiction.


In fact, Penno does not want and does not look for harmonization of formal grounds. What appears to be the hardest, is to choose either the perception of complicated form or focus on extensive internal artistic concepts. The latest works of his might be understood as final chapter of the longterm conceptual and experimental analysis of representational, intermedia and transmedia conventions. Colin Penno initiates polemics in the field of typical perspective and dissolves borders between media and academic disciplines.

Сoncept of «difference» in the work of Raul Diaz Reyes can be seen in simultaneous presence of visually «blured» forms and more definite element, referring us to the postmodern architecture. Unity or, to be more specific, separation of these two elements, which finds balance in the works of Reyes, generate surfaces within space limits or technical laws: the image is observed as a figure, the image becomes its part, generating new landscapes with variable compositional opportunities. Final system of signs tells about sculptural abstractions, in which edges of form construction play with bigger tactility, due to usage of various materials.