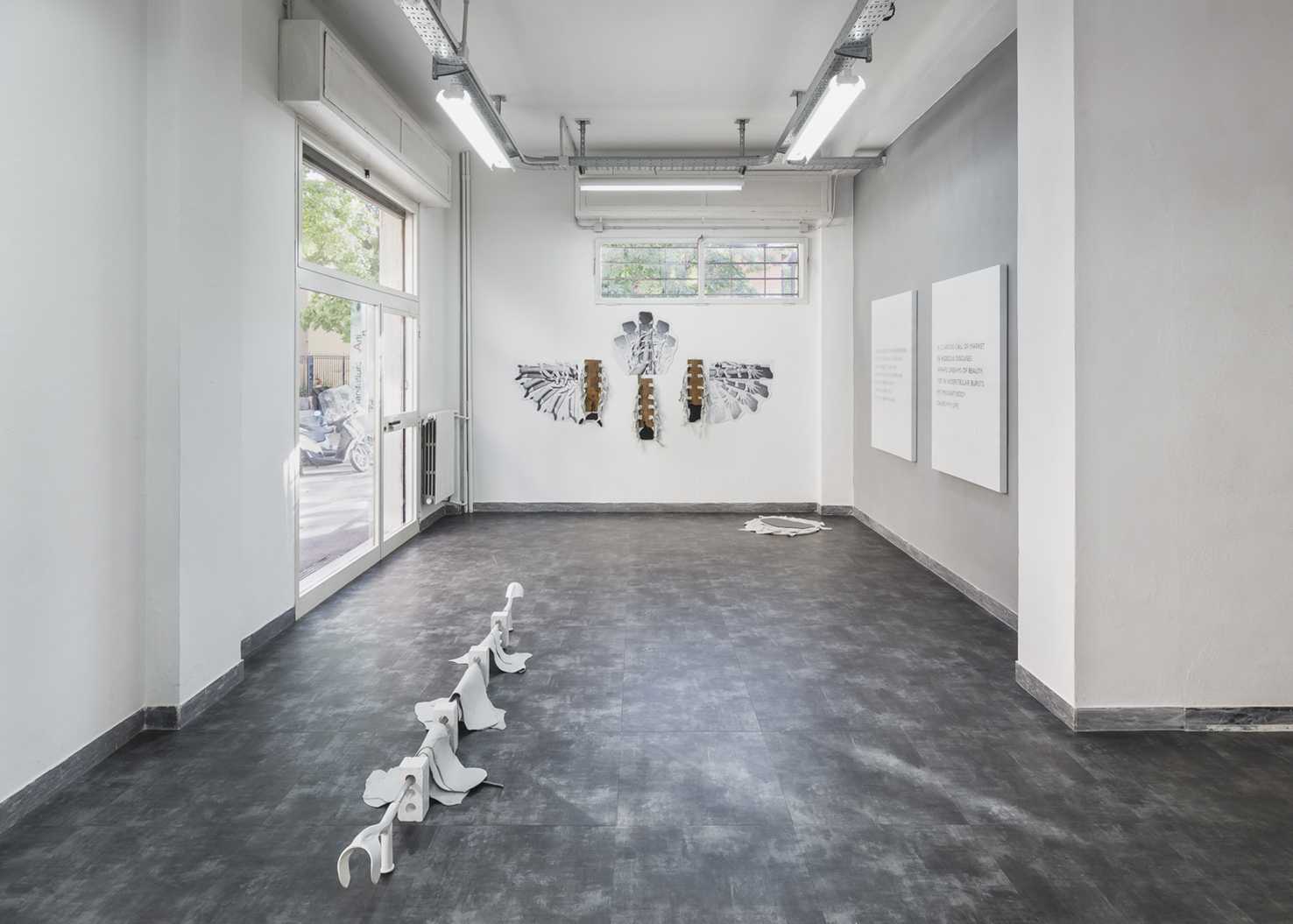 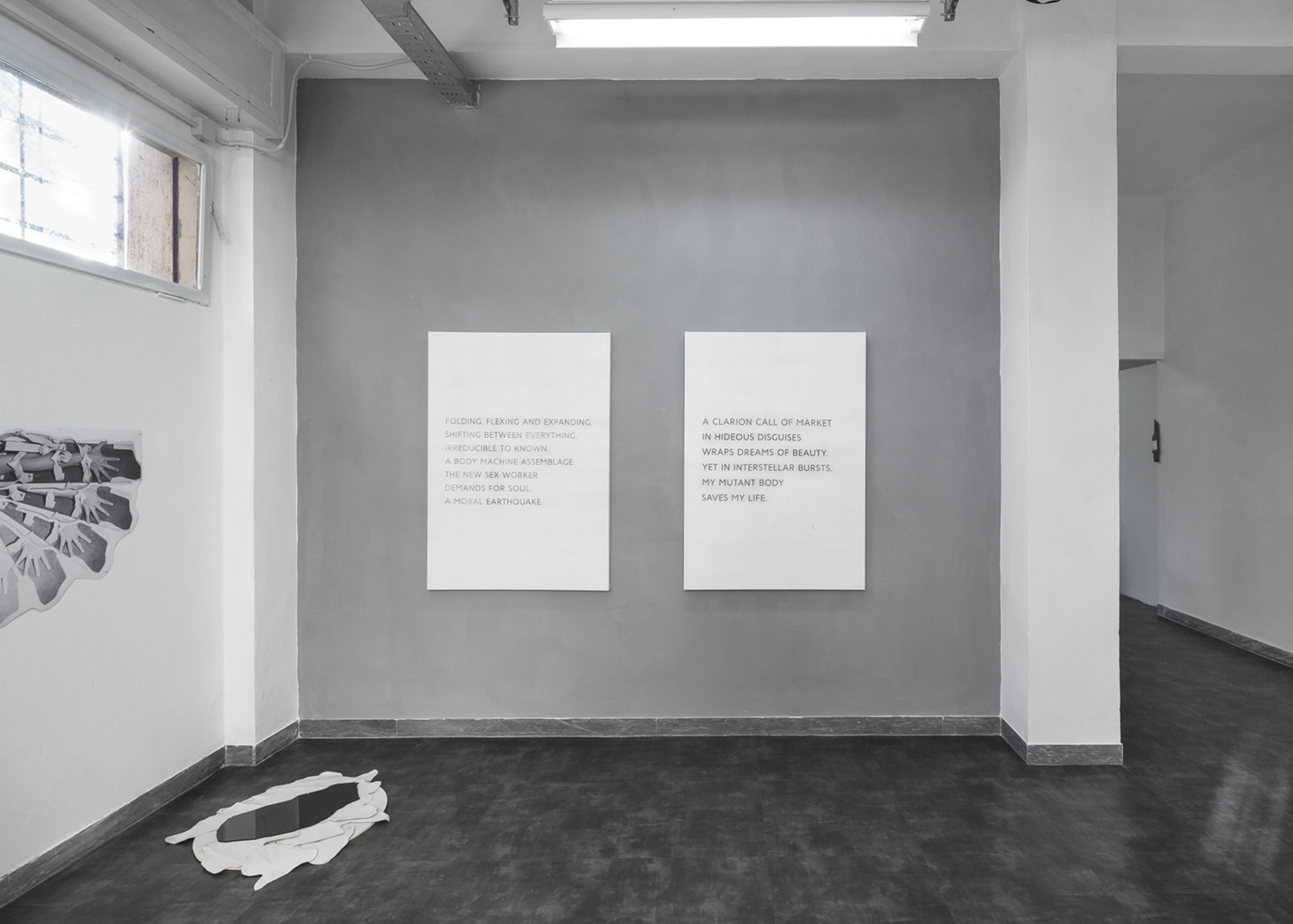 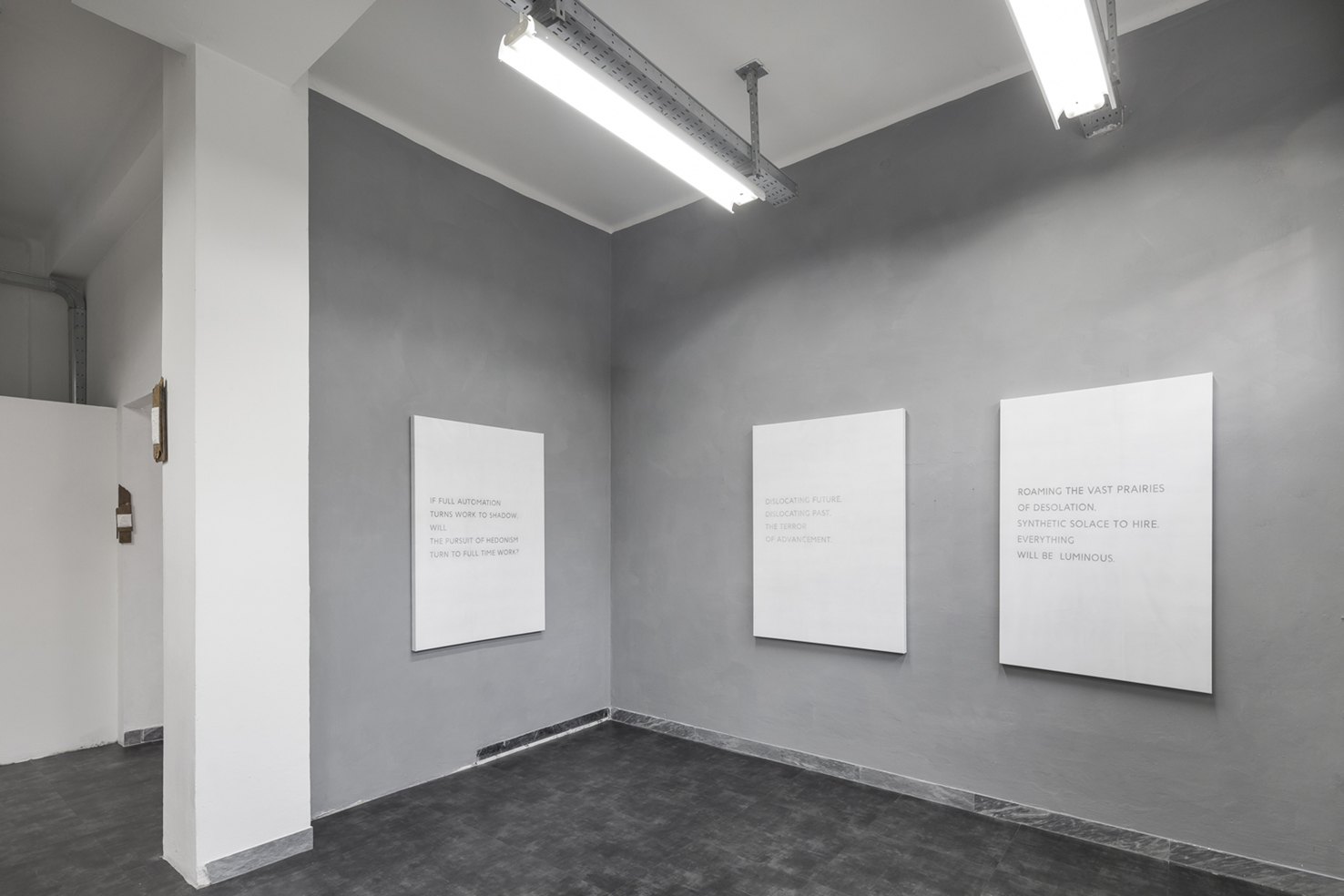 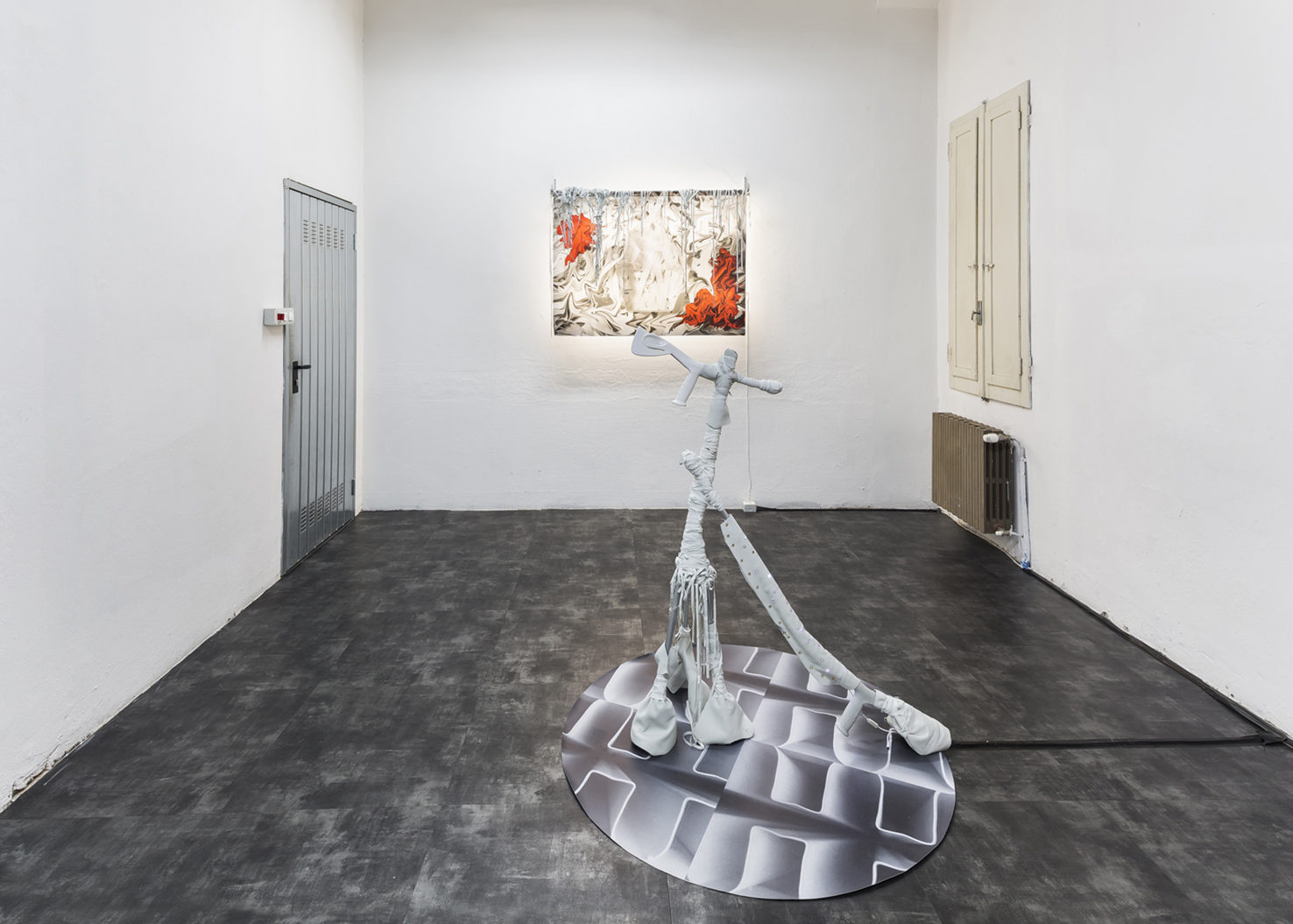 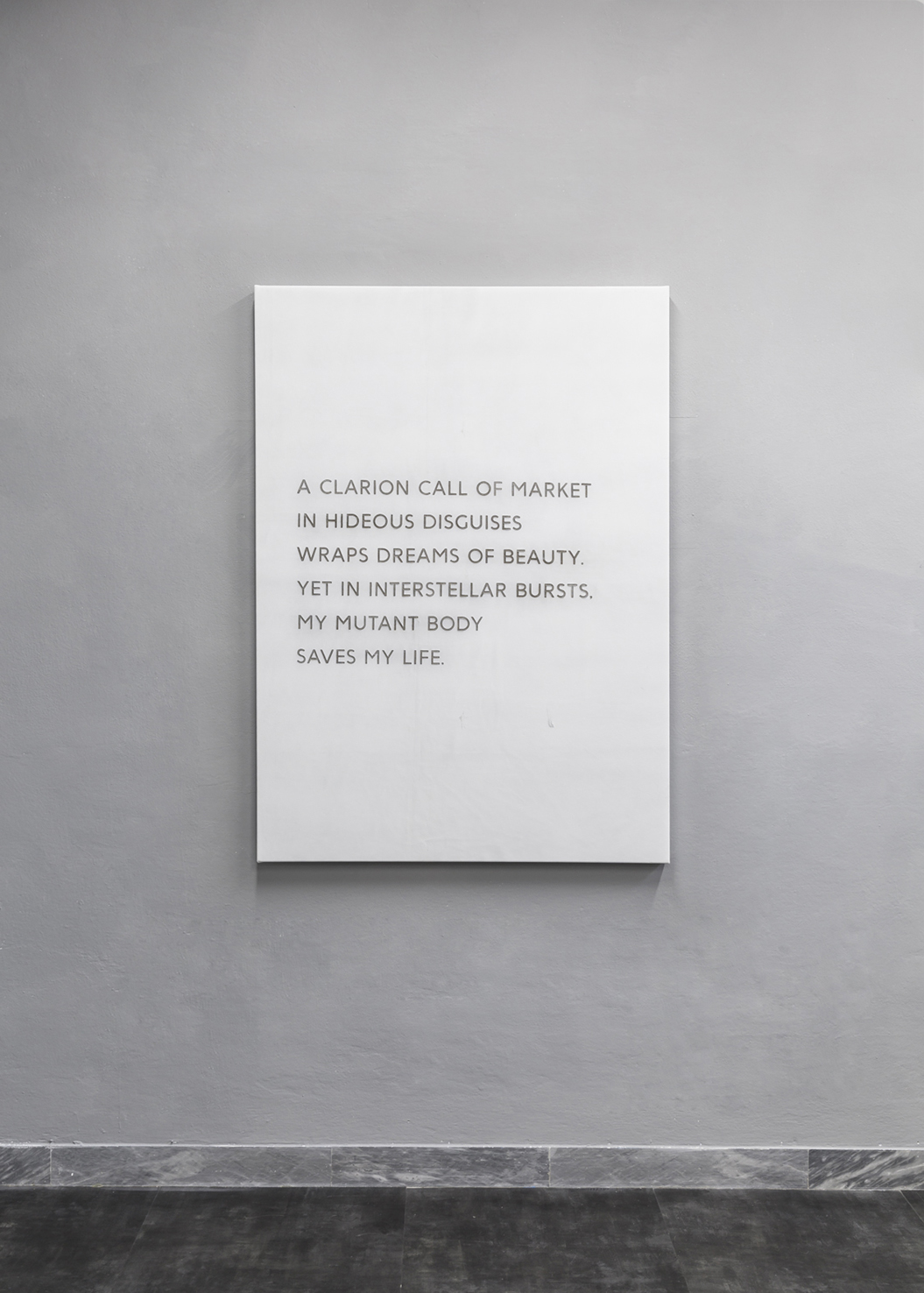 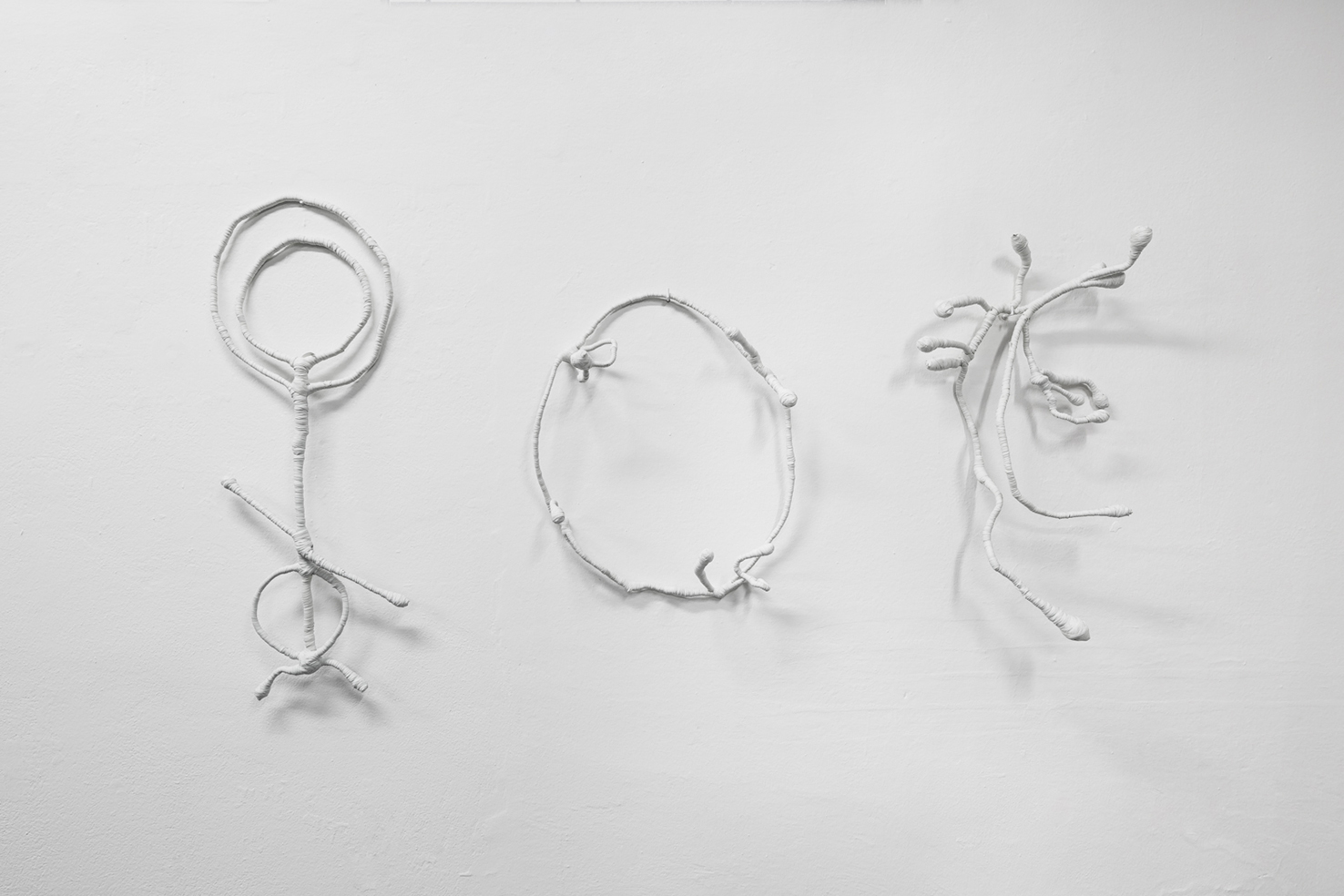 GALLLERIAPIÙ presents “Arrangements & Haze”, the second solo show at the gallery of Apparatus 22, art collective based in Bucharest and Brussels.

While the previous series of leather works “Several Laws. The Elastic Test” was placed in the misty times we are living as a critique of countless norms shaping the body in contemporary society, “Arrangements & Haze” shifts the perspective.
By moving the reflection about the body in a far-away future, the collective advances poetic thoughts meandering between visceral and digital, between pleasure and abuse and most importantly between impossible and something that could be plausible only by way of radical imagination.

Prosthesis for wild imagination, Arrangements & Haze is all about the process of placing together and intertwining thoughts, energies, objects and elements beyond what is known, irrefutable and manifest in order to conjure Apparatus 22‘ (possible) realities of the body in the future.

A section of the “Arrangements & Haze“ exhibition is the set of eight texts on large pieces of leather exploring radical-body scenarios in relation to work, technology, spirituality, extreme ergonomics and economy.
No holding back to the imagination, nor linear traces of realism.
To highlight the tension built between the limited formal means - a rectangle of white leather tattooed with text - and the intense, quintessential quality of the wording, Apparatus 22 coined their approach hardcore minimalism.

Intensity delivered in such a restrained form turns out to be possible, paradoxically, through an overflow of imagination, love and criticality combined.
It is a process very much related to SUPRAINFINIT, a world-making attempt by Apparatus 22 to imagine a universe where hope is used as a critical tool.

Which brings in the exhibition the other body of work: some tools, some outcomes of a fictional rudimentary prototyping studio set by Apparatus 22, this group of works unfolds a ritual space to engage with essential problems of imagining a radical new body.

At once clumsy and driven by imagination, rough and fragile, shamanistic and imbued with (peculiar) logic, the heretic daydream is shaped over and again.
Crafting the titles of the works has as much importance as crafting the objects and the ways to overcross the arbitrary limits of today.
All these well aware of the very long-term perspective of any form of radical change, but also on the need to tackle the ethical trouble and the danger of scientific research to be arrested in the hand of corporations etc

A clandestine fluxus-like prototyping could be.
In penumbra, little things grow.

Apparatus 22 is a transdisciplinary art collective founded in January 2011 by current members Erika Olea, Maria Farcas, Dragos Olea together with Ioana Nemes (1979 - 2011) in Bucharest, Romania. Beginning with 2015 they are working between Brussels and Bucharest.

They see themselves as a collective of dreamers, researchers, poetic activists and (failed) futurologists interested in exploring the intricate relationships between economy, politics, gender studies, social movements, religion and fashion in order to understand contemporary society. A recent topic of research and reflection in the practice of Apparatus 22 is SUPRAINFINIT universe: a world-making attempt to use hope critically in navigating present and future.

In their very diverse works - installations, performances, text based-shapes, reality is mixed with fiction and storytelling and all merge with a critical approach drawing knowledge & experience from design, sociology, literature and economics.