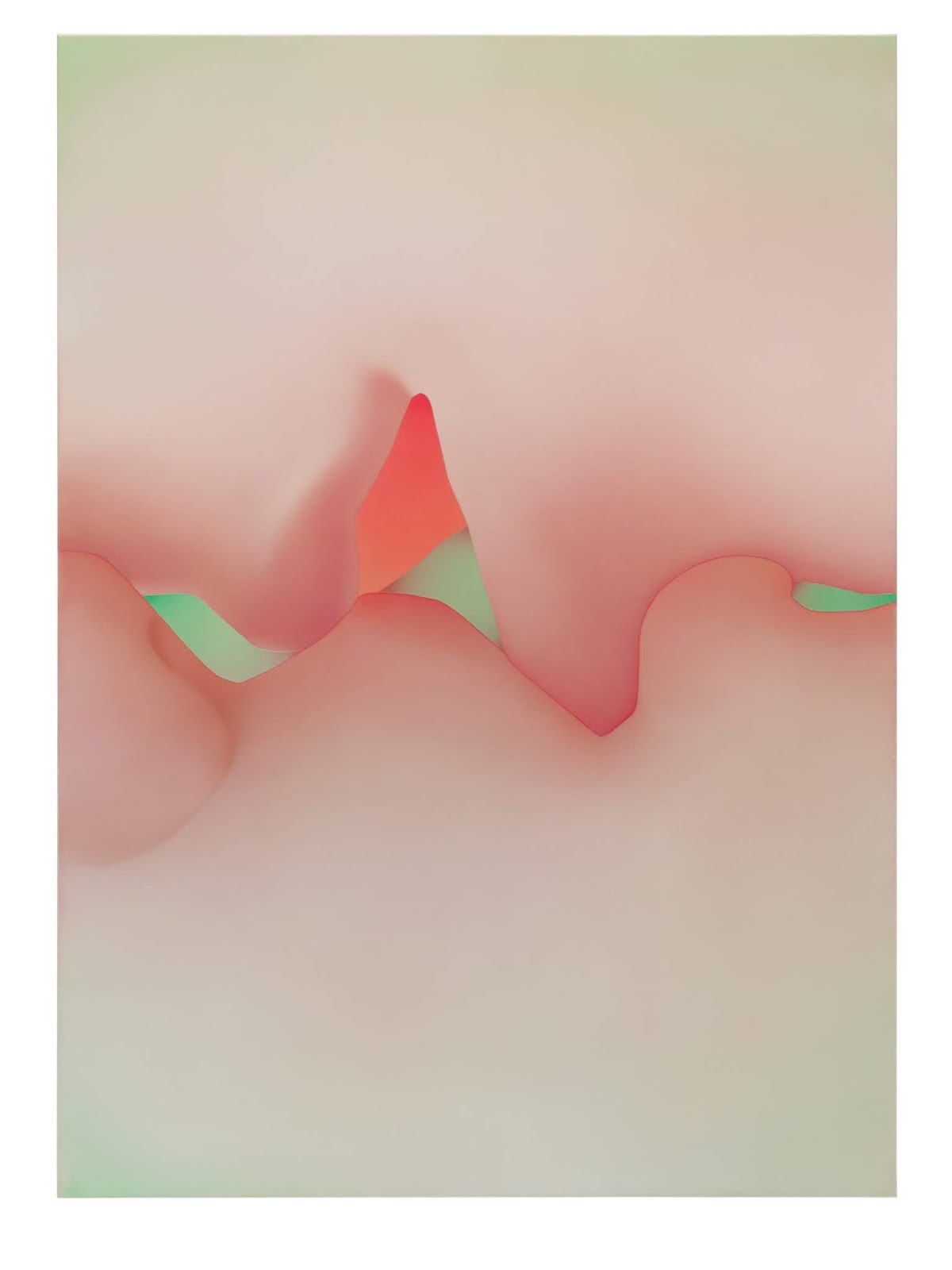 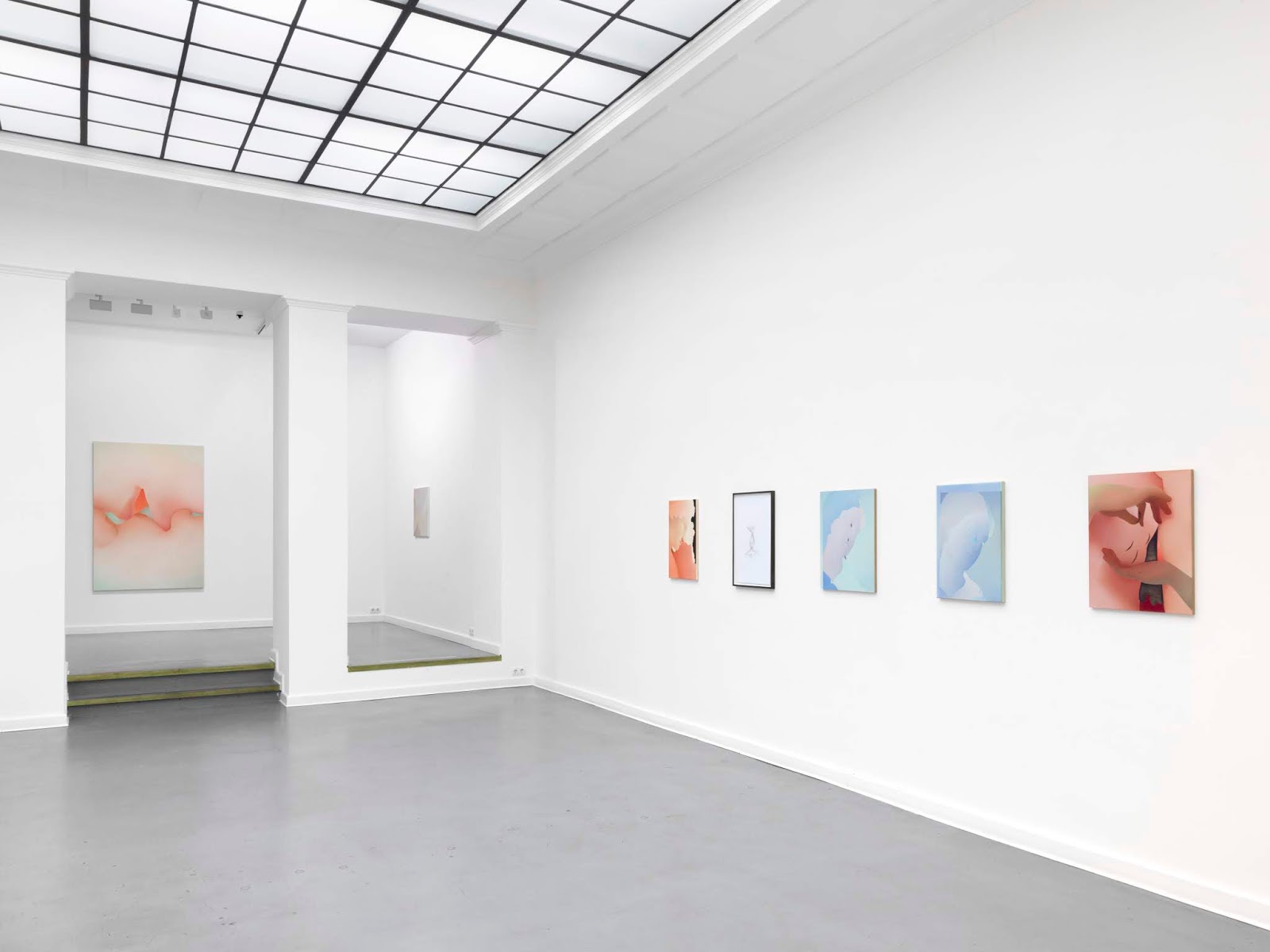 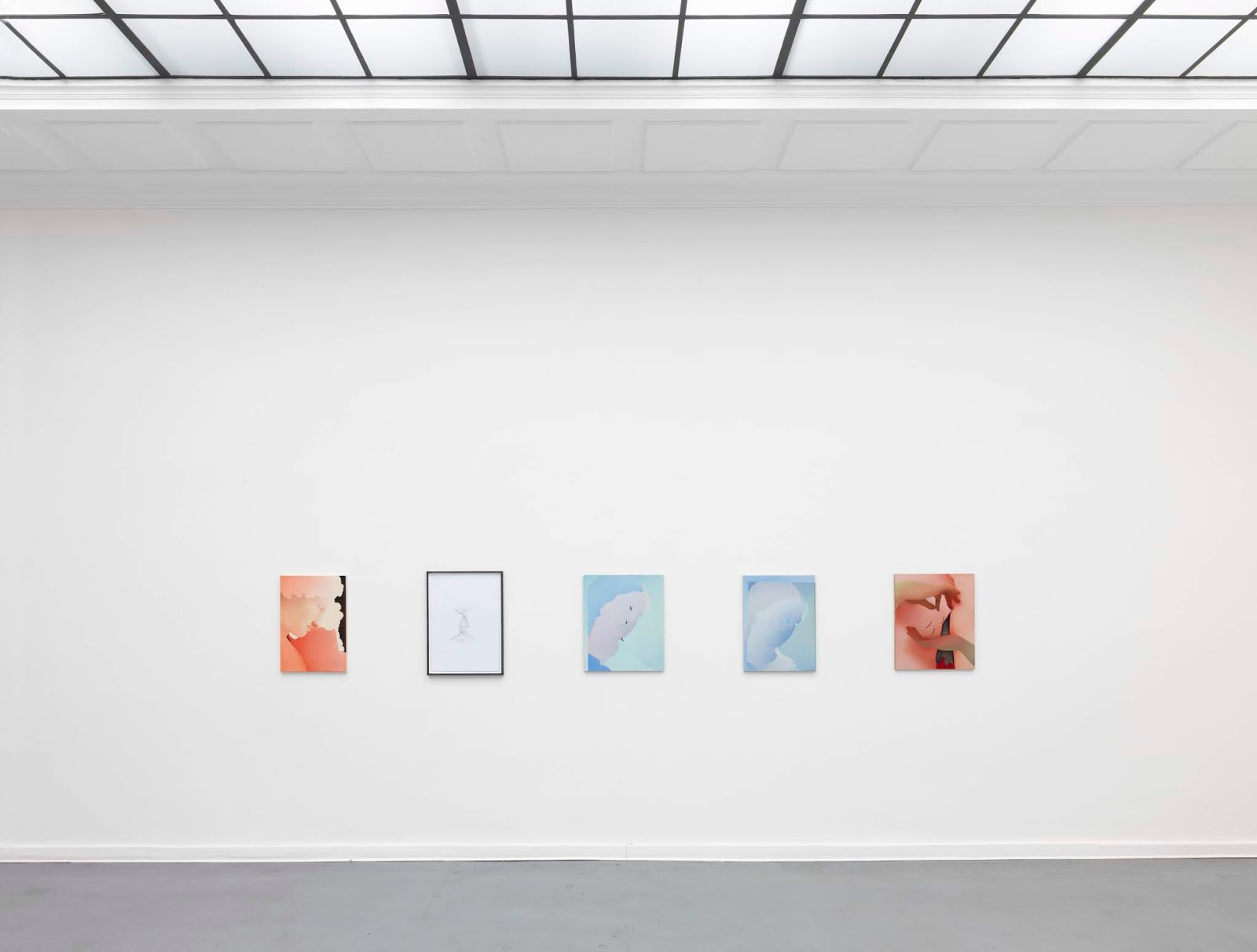 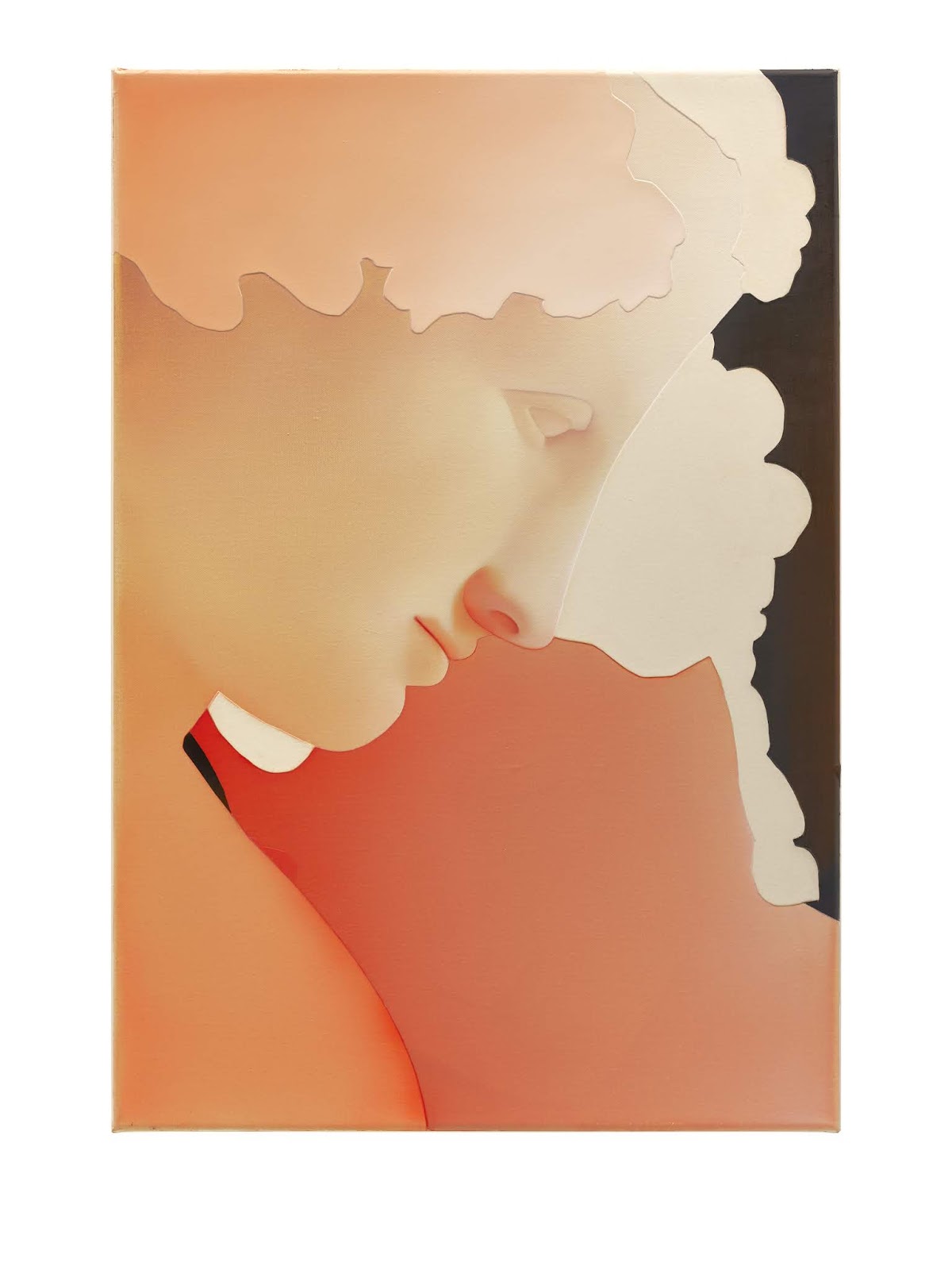 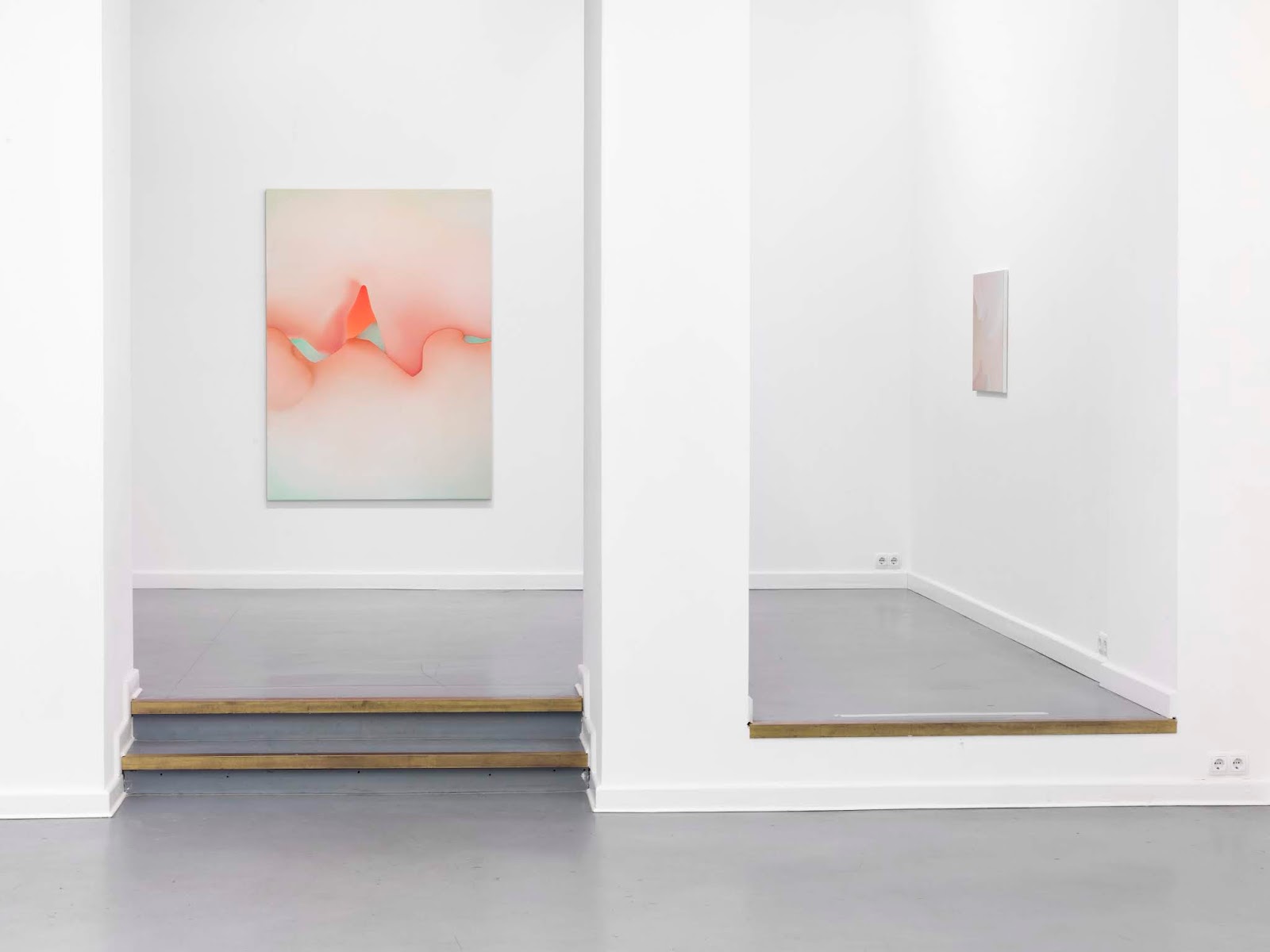 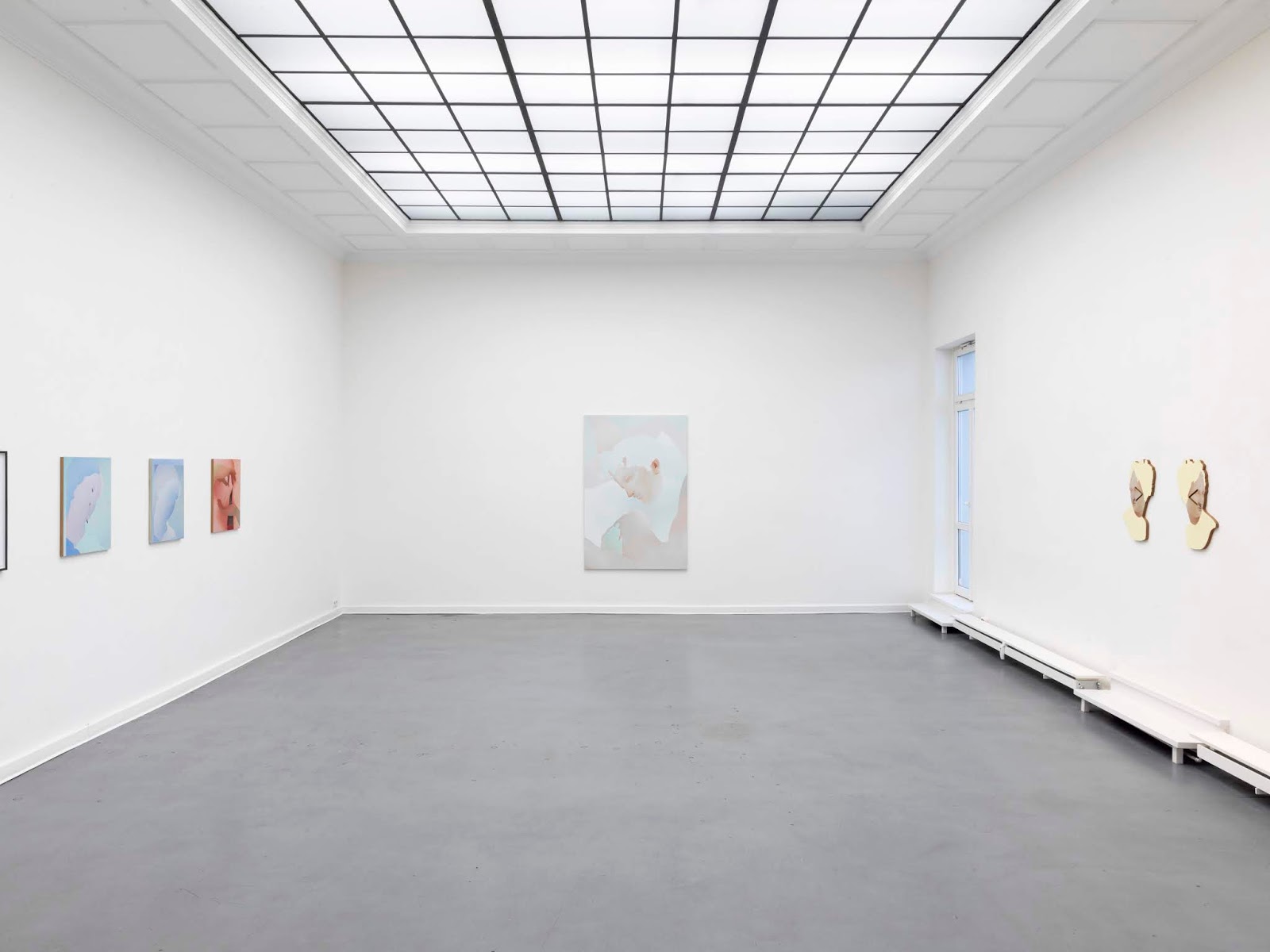 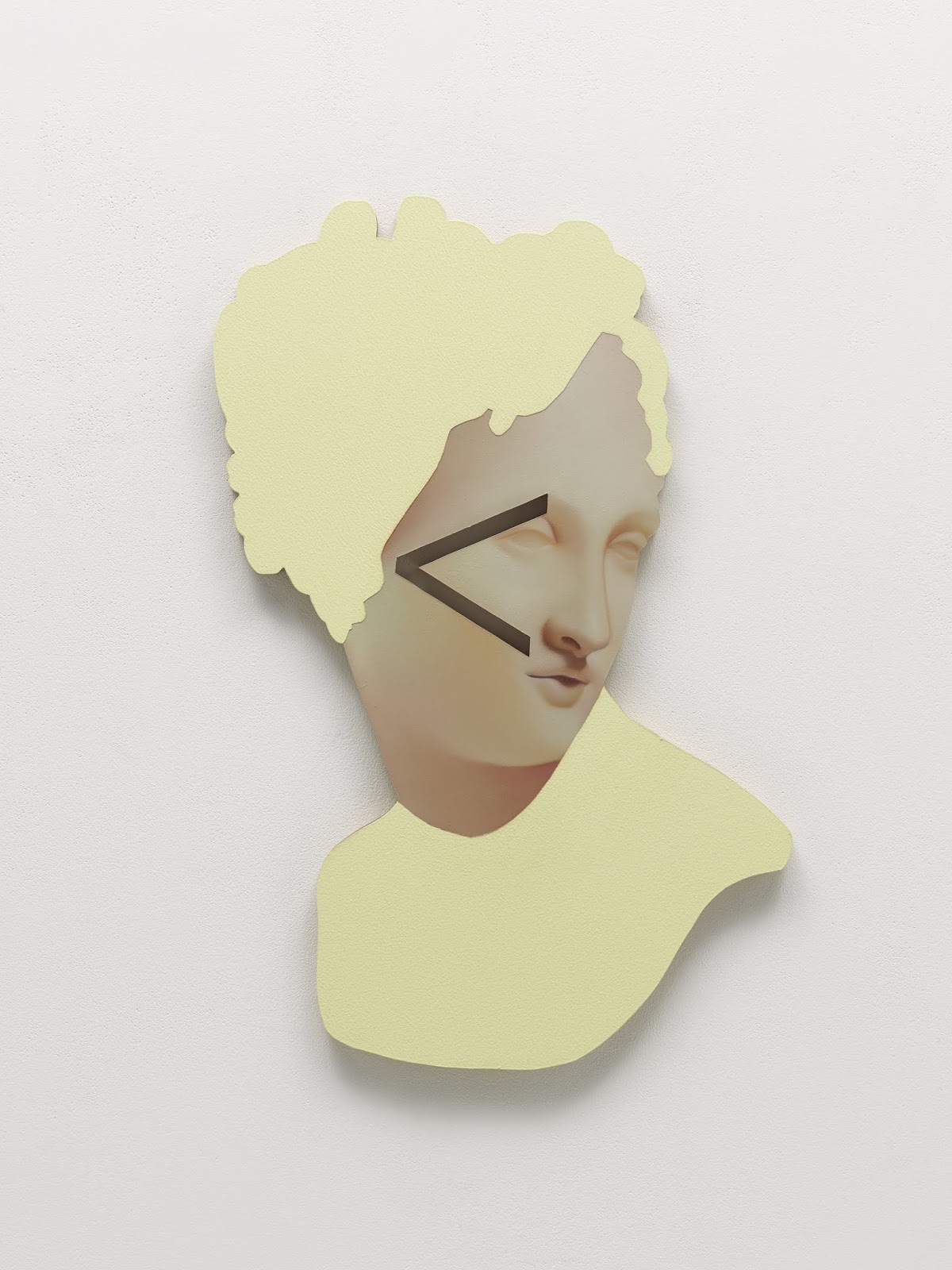 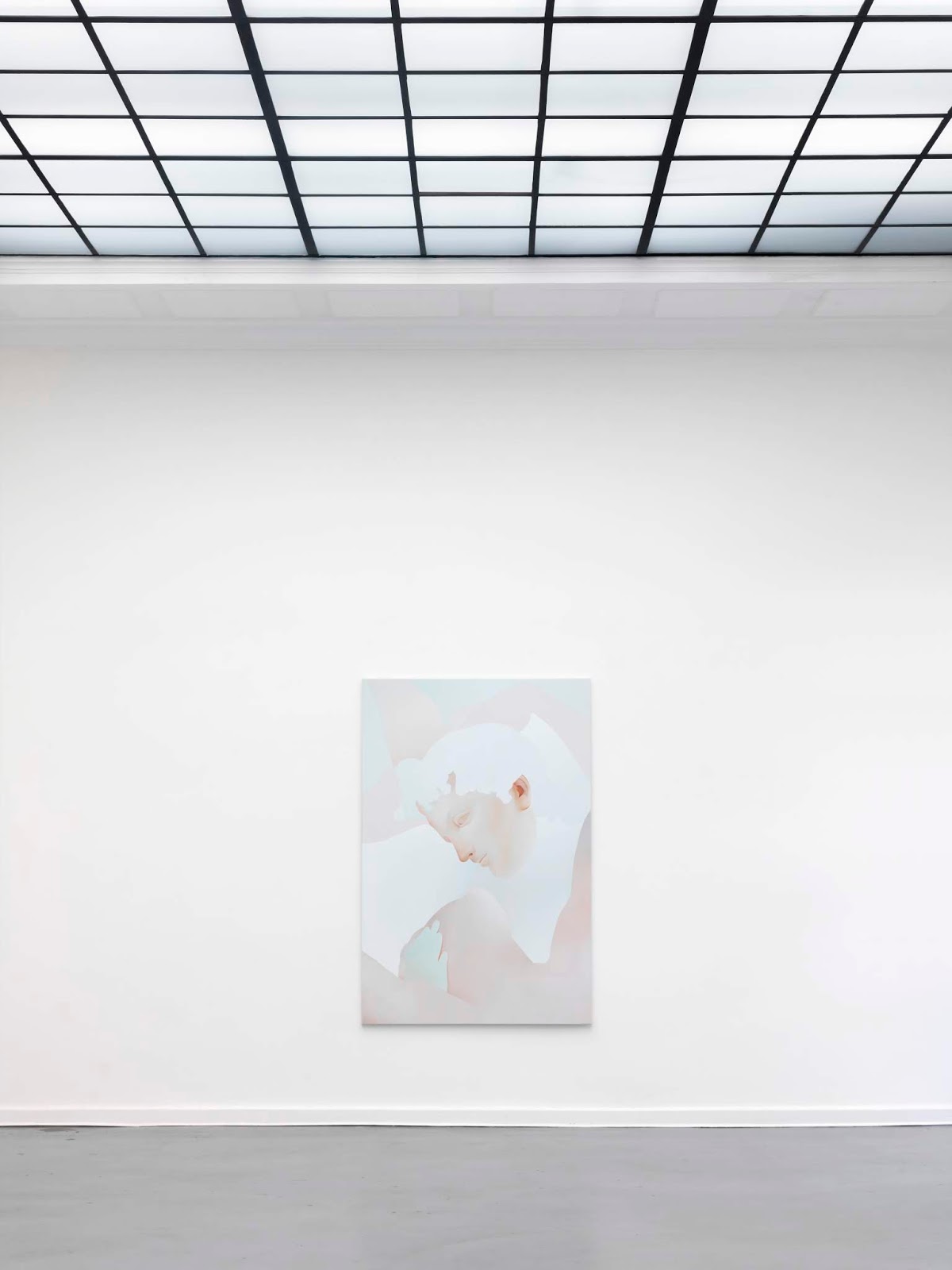 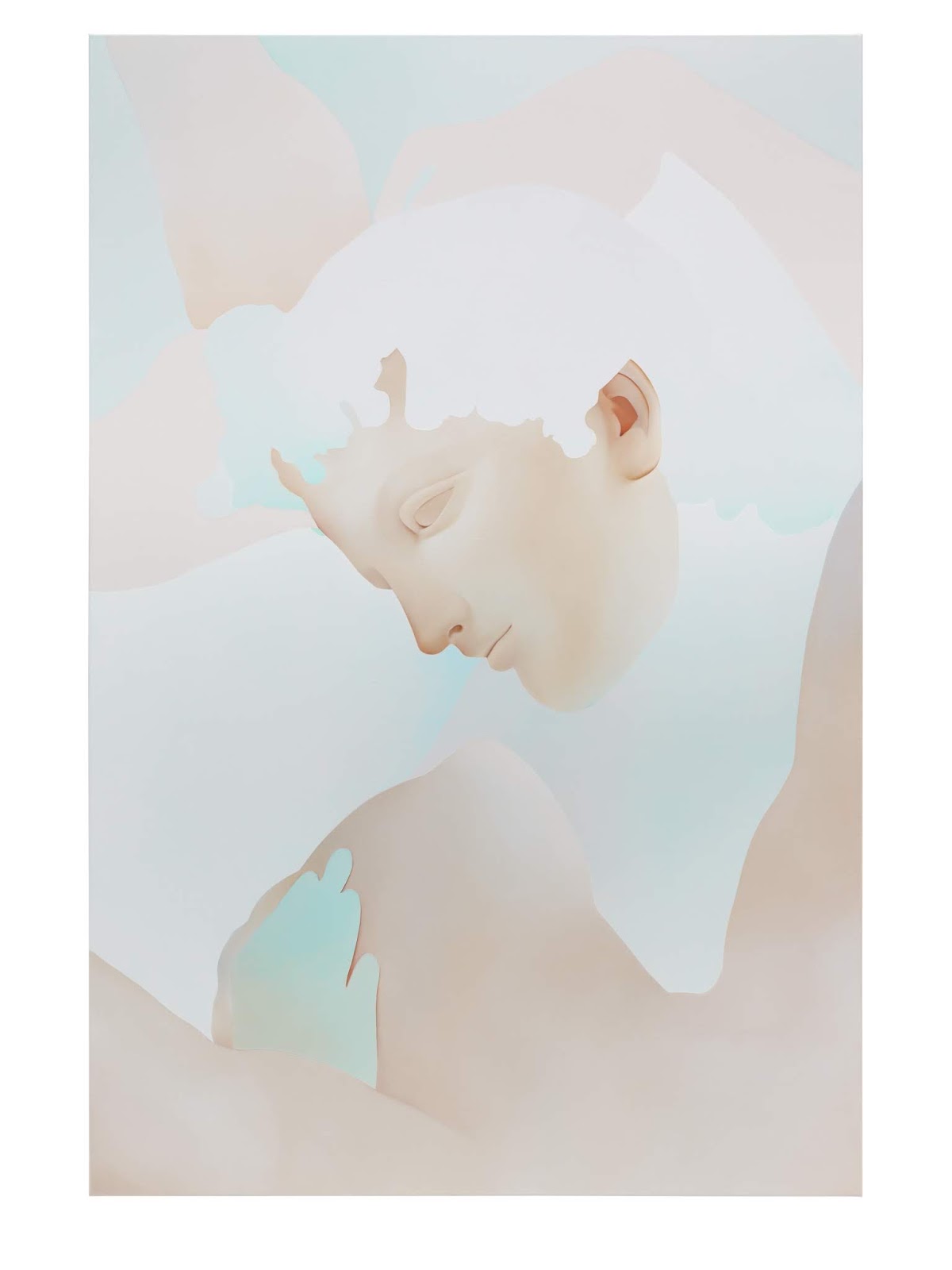 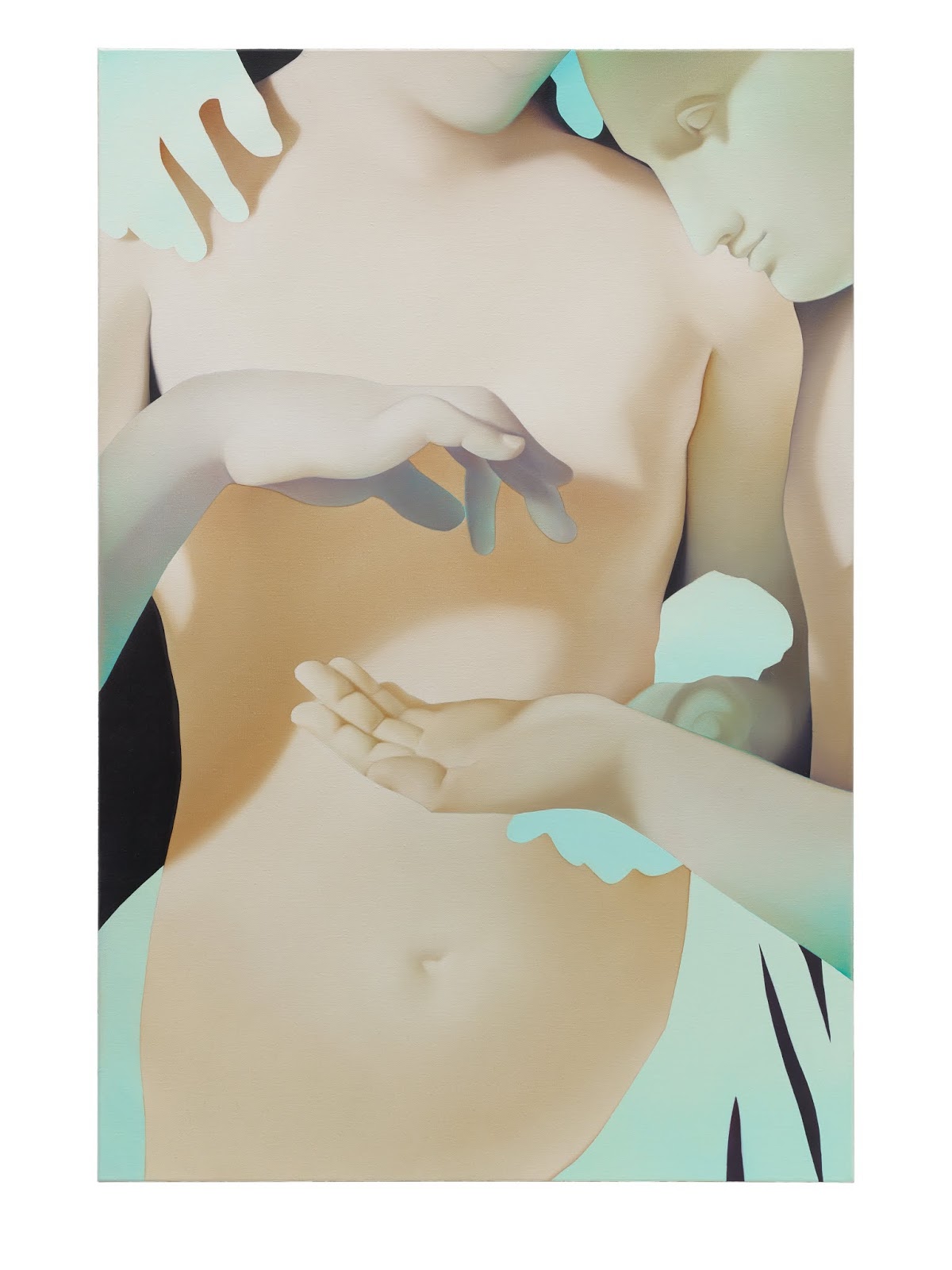 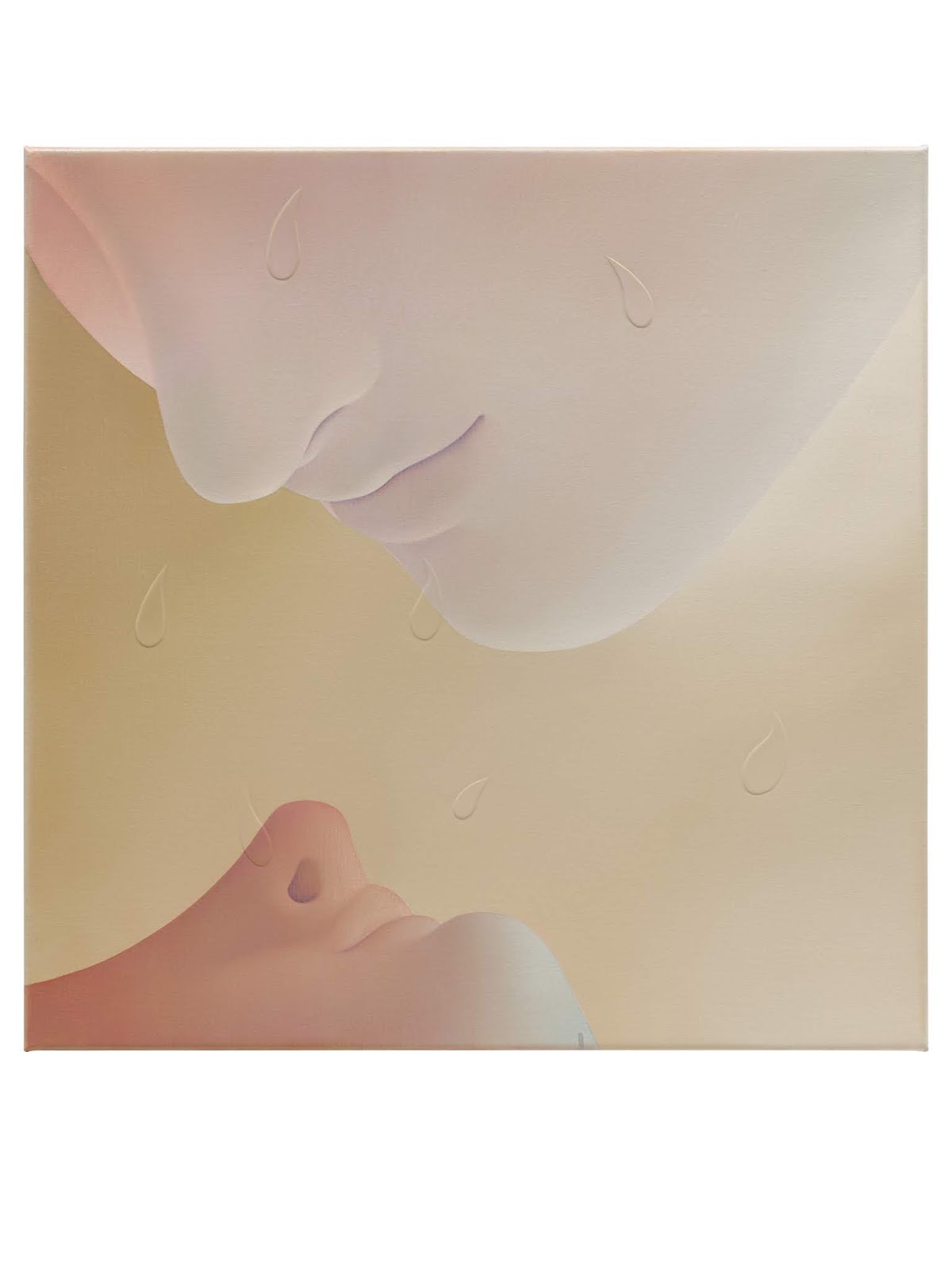 For Vivian Greven, the story of Amor and Psyche is the starting point of her new works. It is the ancient tale about a unity destroyed by Psyche‘s desire to recognize the real figure of her lover: her mind demands to see the nature of Amor, for what we see is easier to comprehend. Knowledge and visualization are central themes in the art of Vivian Greven. As an artist of a generation that grew up with the Internet, she transfers the mechanisms of media image production to the construction of her artworks.

The digital distribution of idealized images is now permeating all areas of life. Characteristic is their seamless surface, which usually presents nothing else but itself. Immaculacy and smoothness are attributes that promise success, and the pursuit of it explains the ubiquitous urge for selfoptimization and the excess of design. Vivian Greven paints such surfaces. Finely elaborated flesh colors collide with monochrome tones, volume with incorporeal surface. The hybrid is symptomatic of our era. And equally typical is a flood of media images in which a focused view isolates fragments from their context and claims their significance. Vivian Greven isolates such elements from her paintings and gives them independence. A tear turns into a hole, a hole becomes a comma and the gap becomes meaningful. She also focuses on Psyche‘s hands, albeit without showing the butterfly, whose wings were plucked by Psyche, and which, without its wings, becomes a soulless body. The gap in the picture symbolizes the barely tangible and incomprehensible.

By exploring the limits of natural and artificial, animated and inanimate, Vivian Greven´s art simultaneously becomes a reflection of a postmodern subject-perception in the digital age. Art no longer mimics life but life mimics artificiality. The smooth surface is a facade and the substantial human behind it barely noticeable. Amor only visited Psyche under the cover of darkness to hide his divine entity from her. The human stain in Psyche was her unrestrained longing to recognize the true nature of her lover. With the light of an oil lamp she wanted to see his face, but a drop of hot oil hurt him, and disappointed in her breach of trust, Amor turned away from her, leaving Psyche in despair and deep sorrow. Injuries show up in wounds. The painted surface in Vivian Greven’s works is immaculate only at first glance. It shows fine scars and cracks and in a relief even knife-like cuts. Looking at a surface always raises the question of what lies beneath it. This is exactly the question Vivian Greven addresses.

Vivian Greven, born in 1985 in Bonn, lives and works in Dusseldorf. She studied English language and literature and painting at the Kunstakademie Dusseldorf. There she was a master student of Prof. Siegfried Anzinger. In 2016 she received the Strabag Artaward. In August 2018, she received the Providence College Galleries scholarship in Rhode Island, USA, including participation in the exhibition Classic Beauty: 21st Century Artists on Ancient Form (until November 17, 2018). Her works are part of the exhibition Ekstase at Kunstmuseum Stuttgart (from September 29, 2018 until February 24, 2019).
Tags Aurel Scheibler, Berlin, Lazy exhibitions, solo show, Vivian Greven
Newer Post Older Post Home