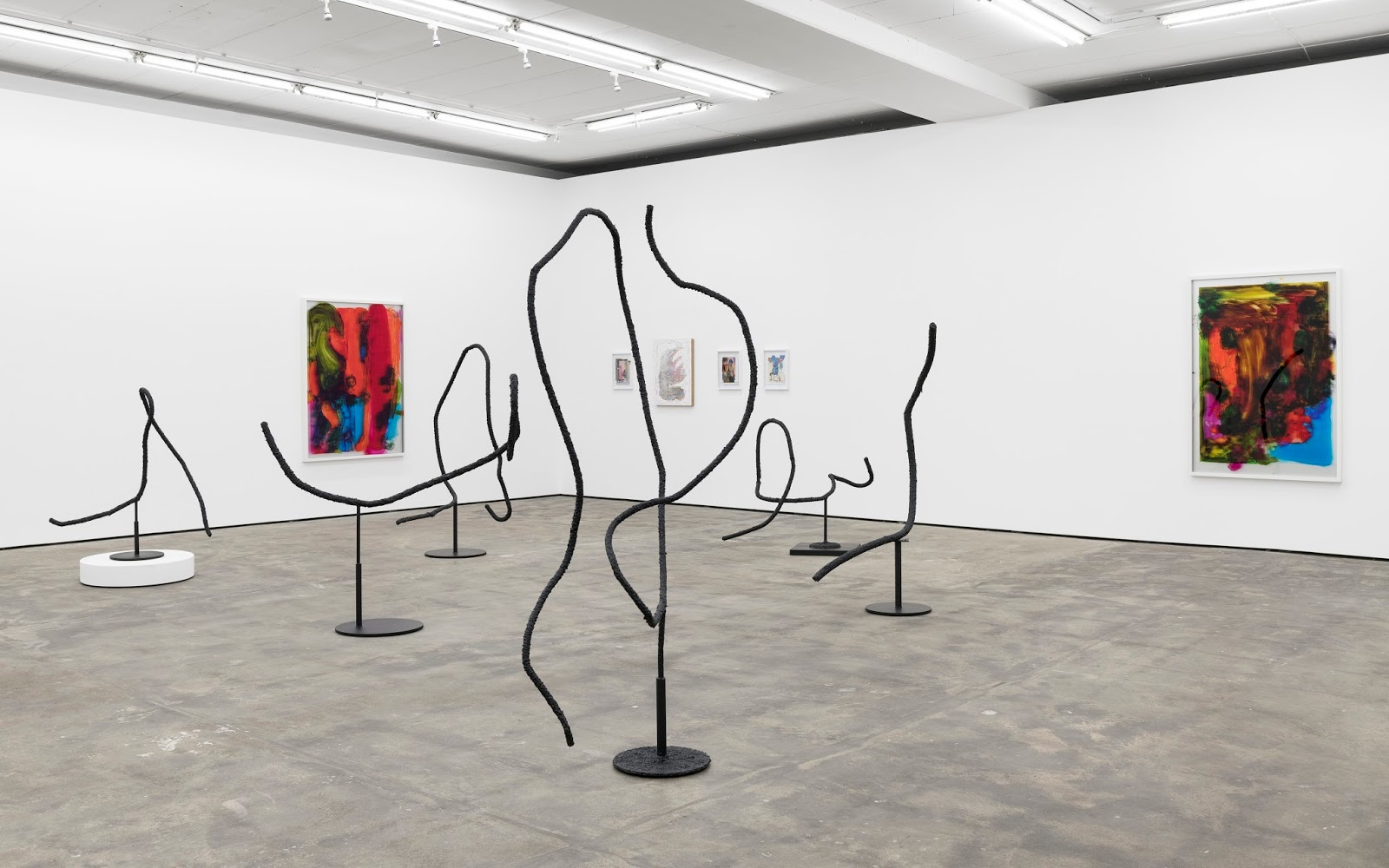 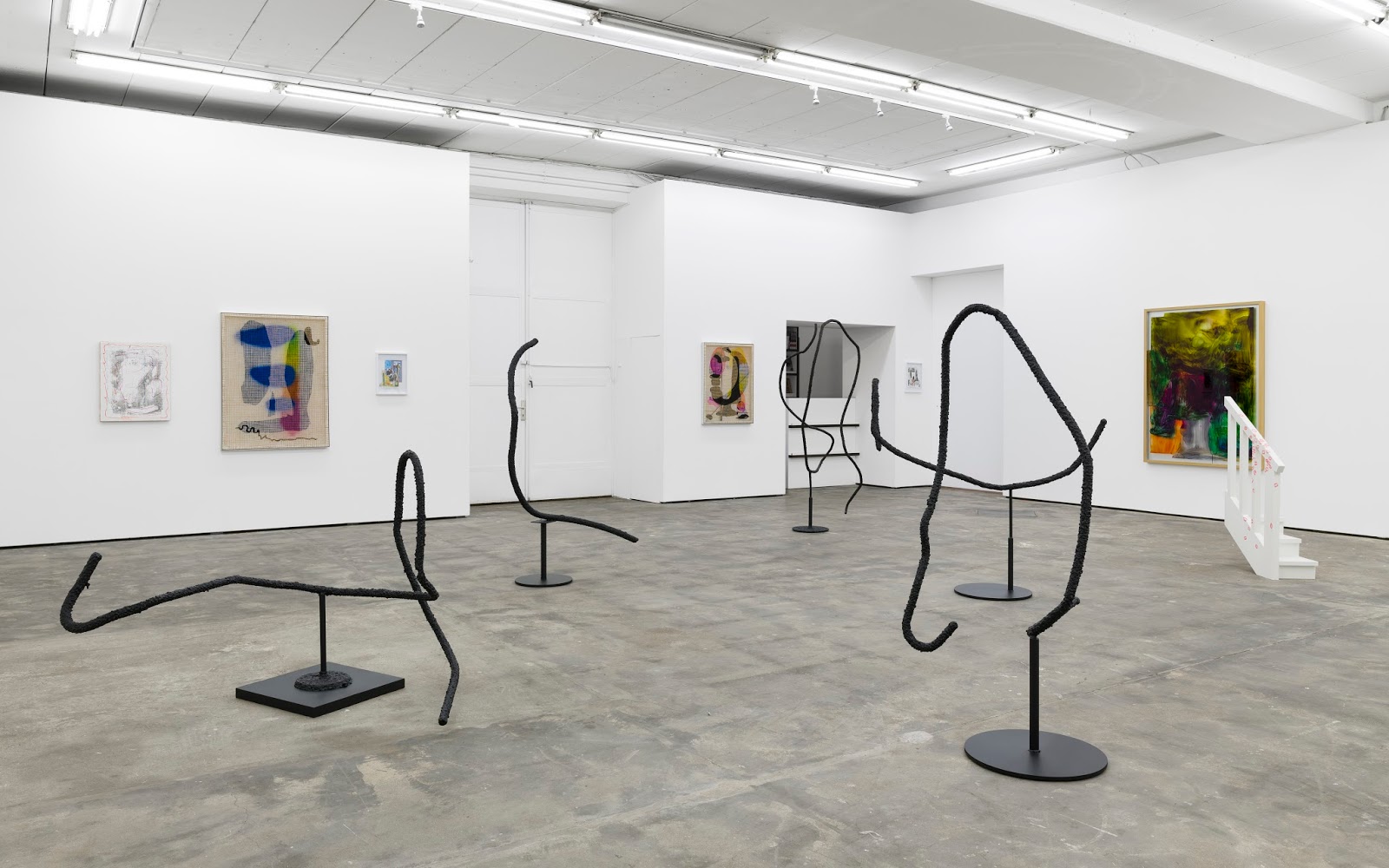 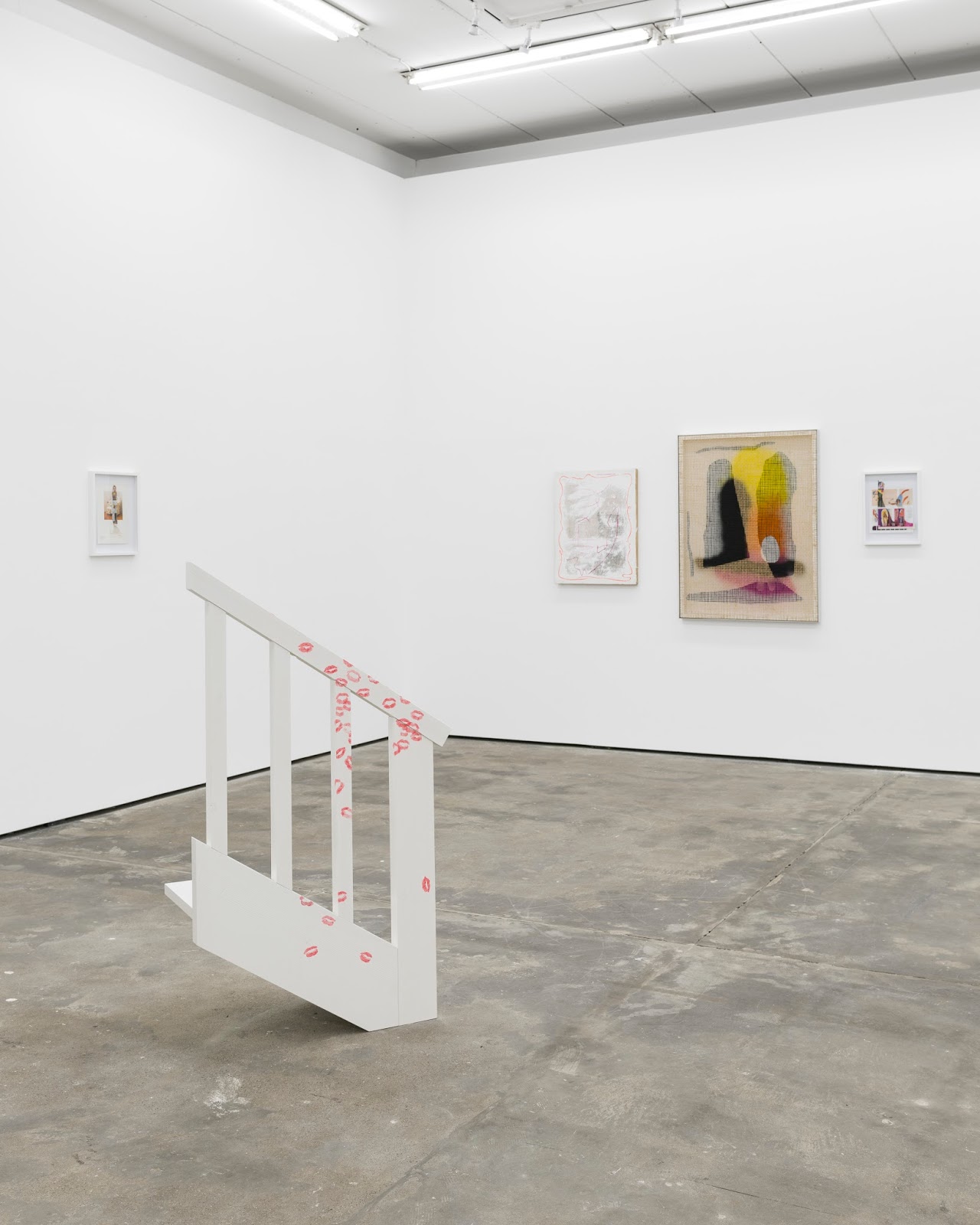 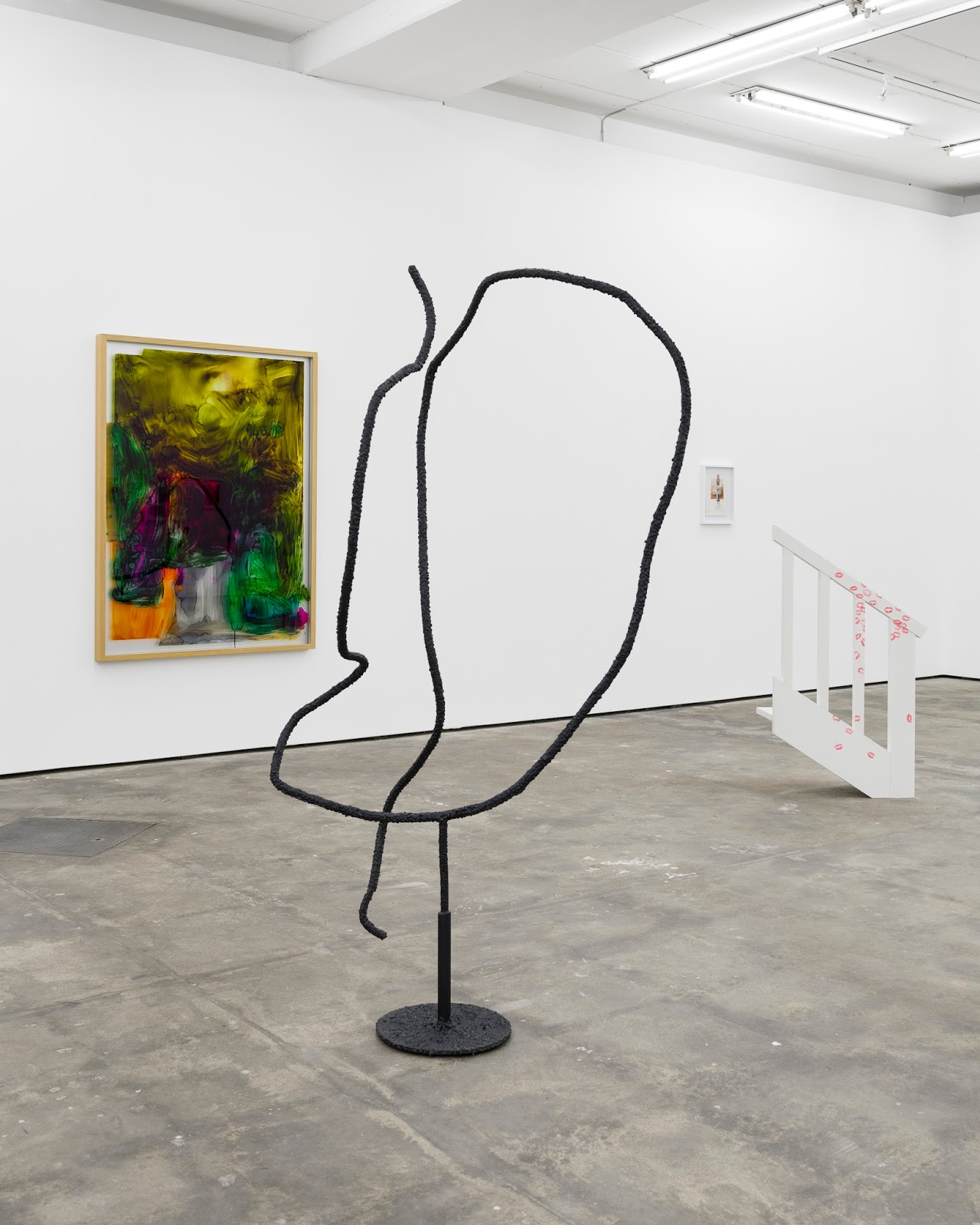 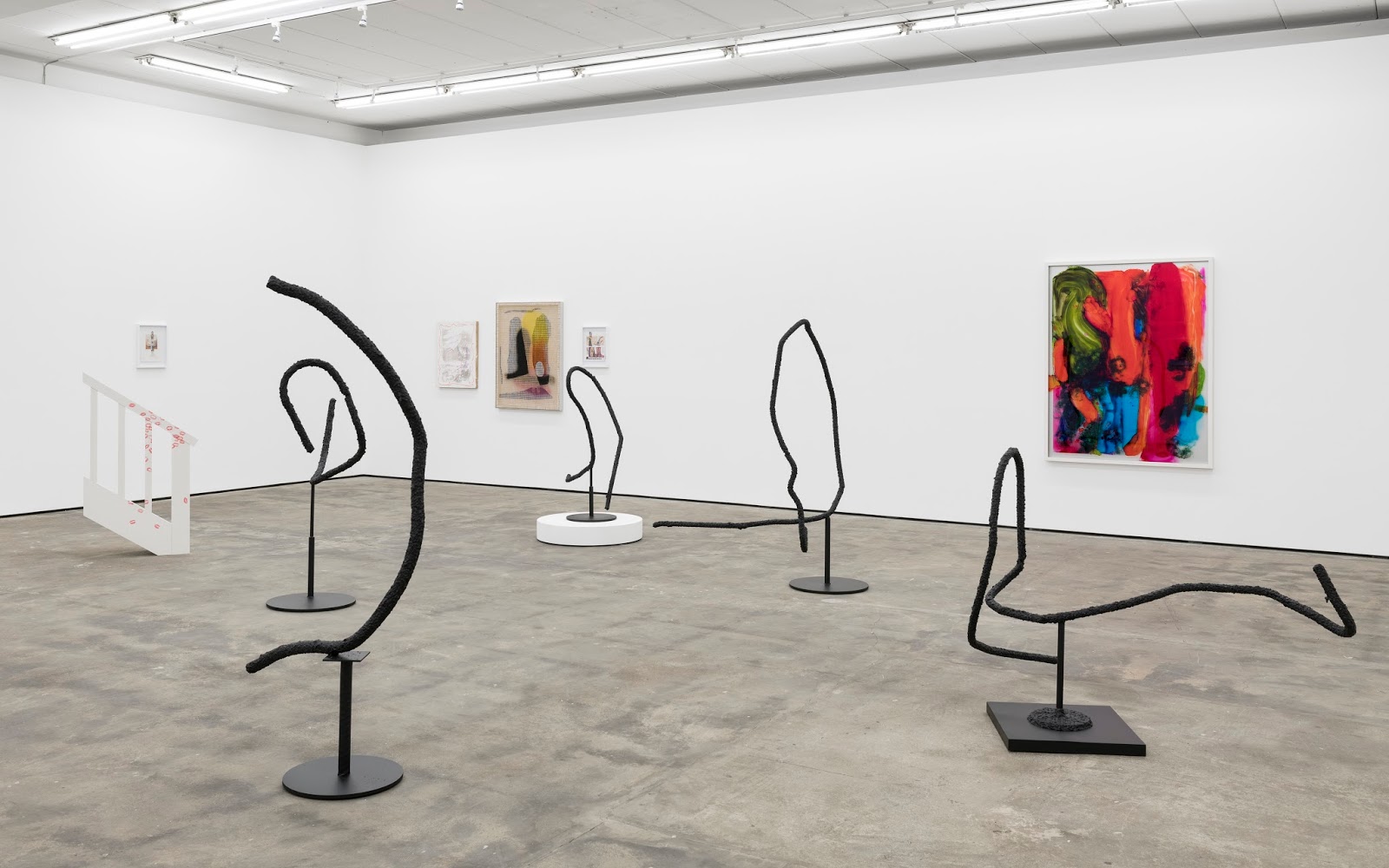 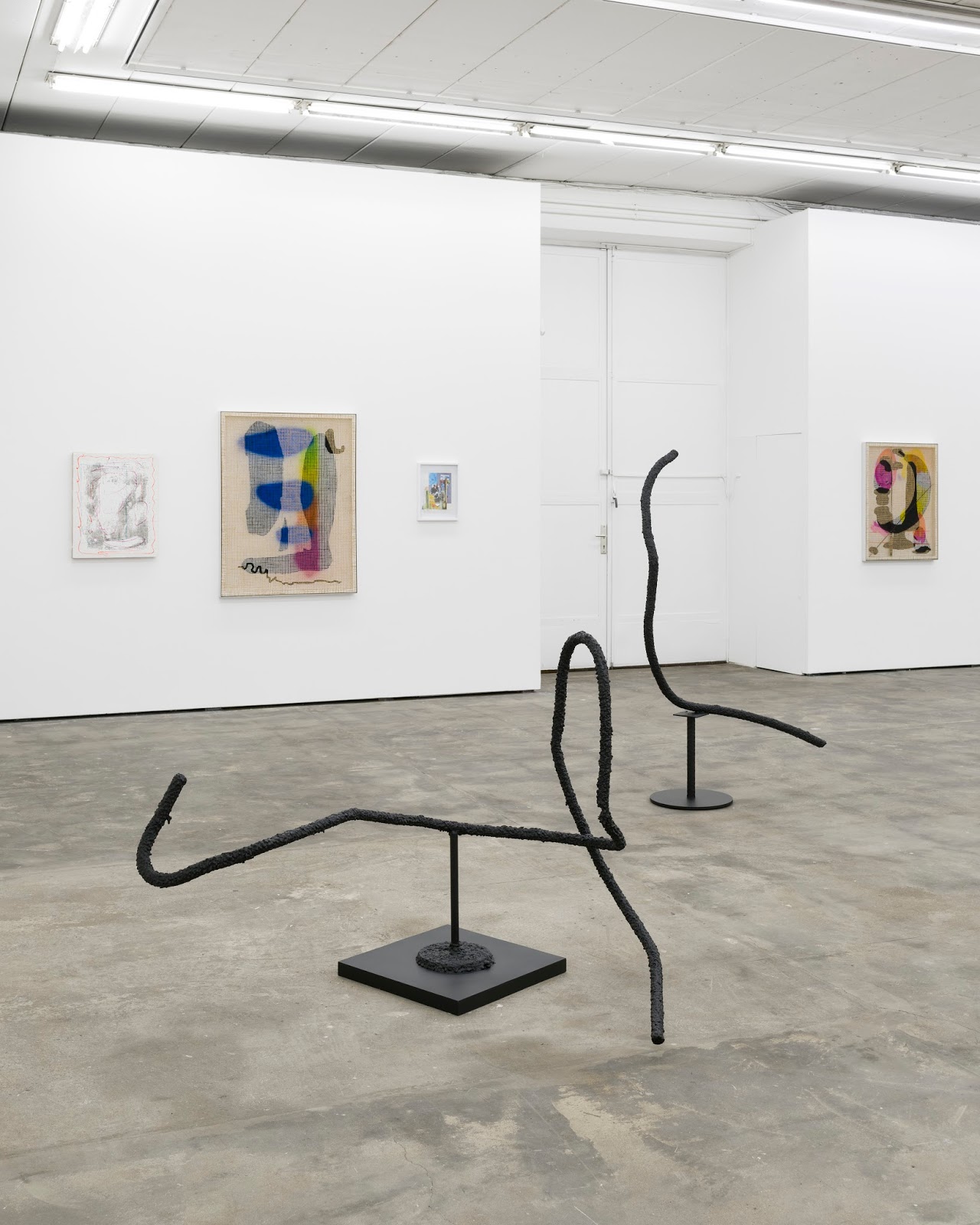 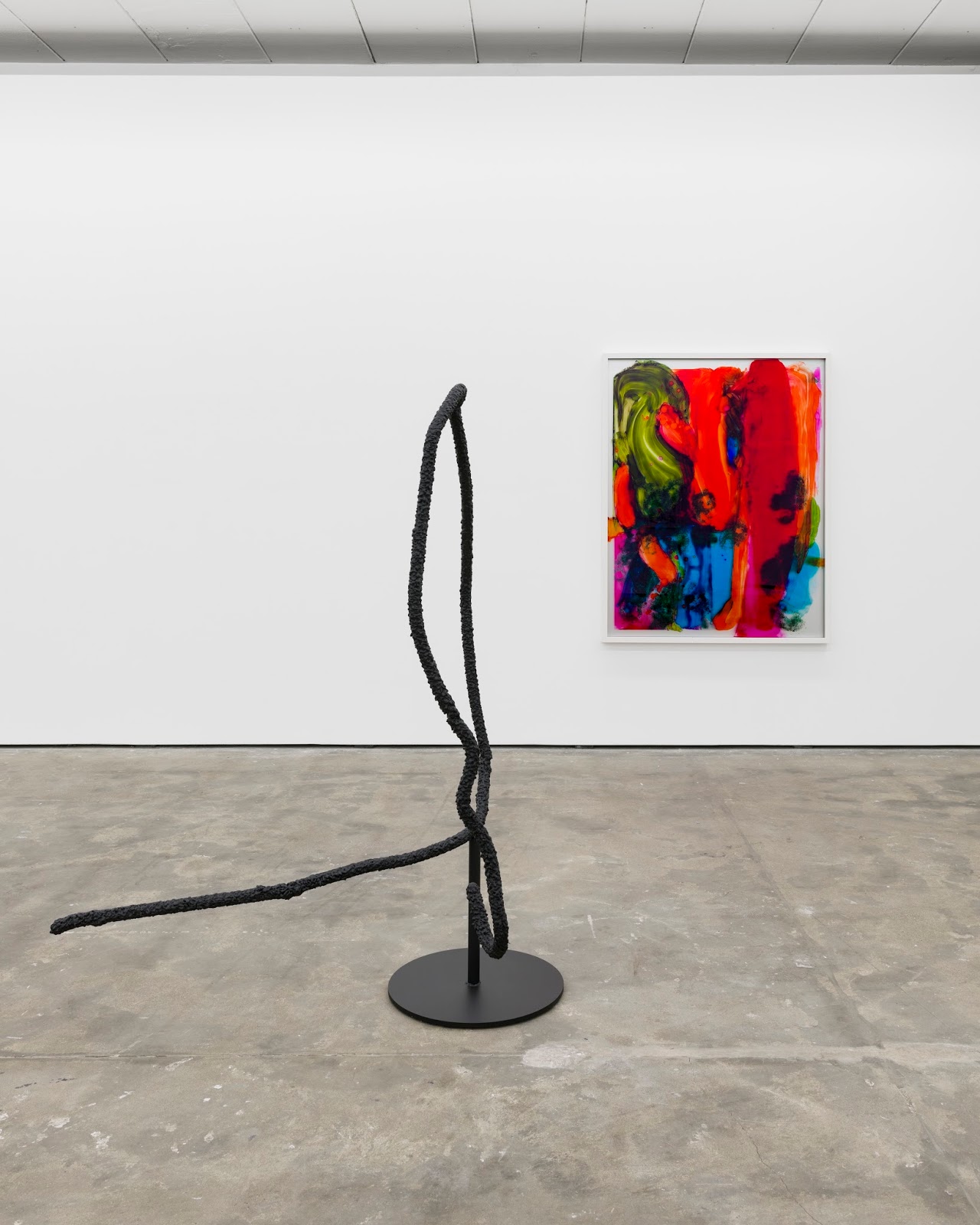 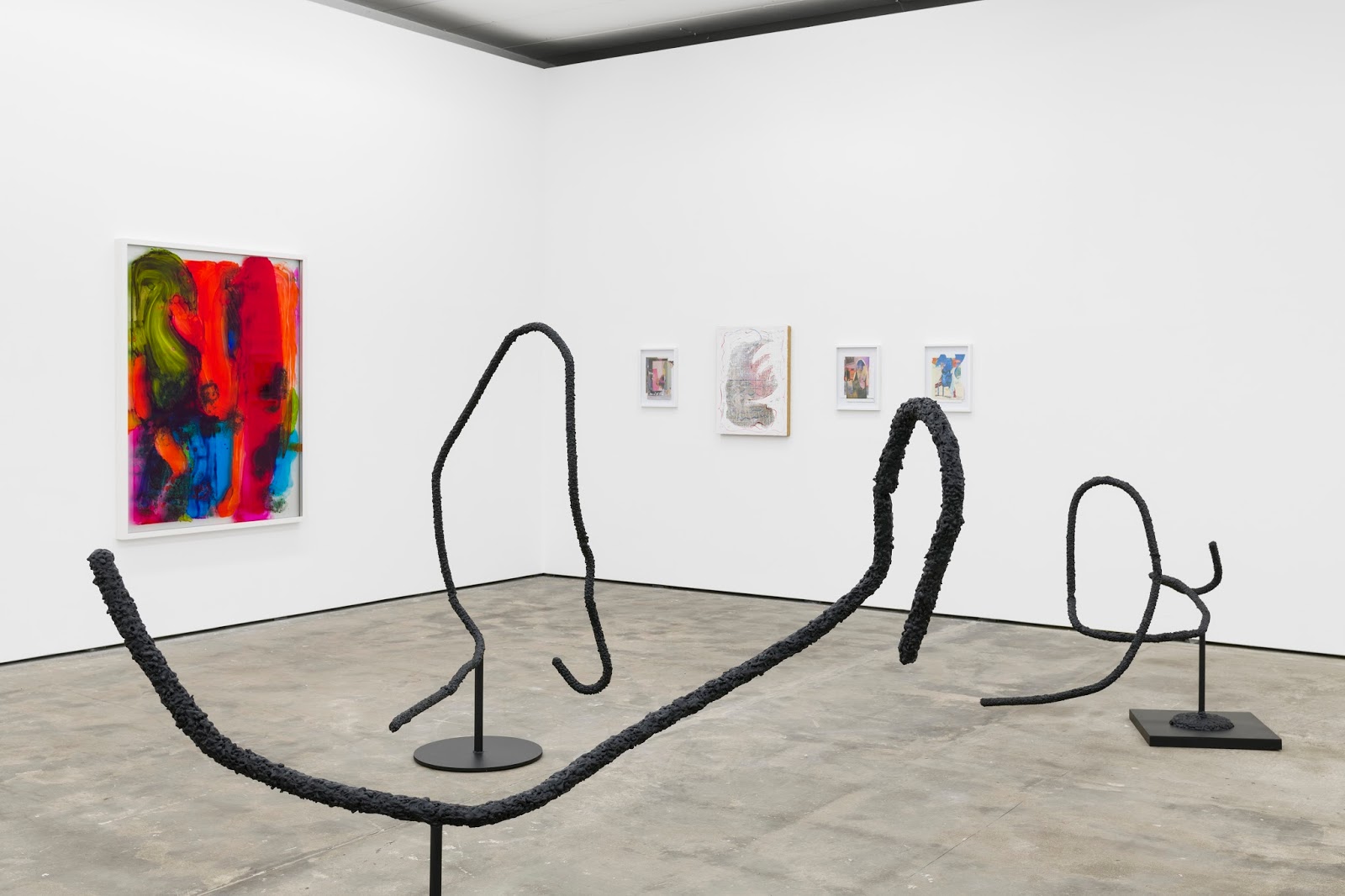 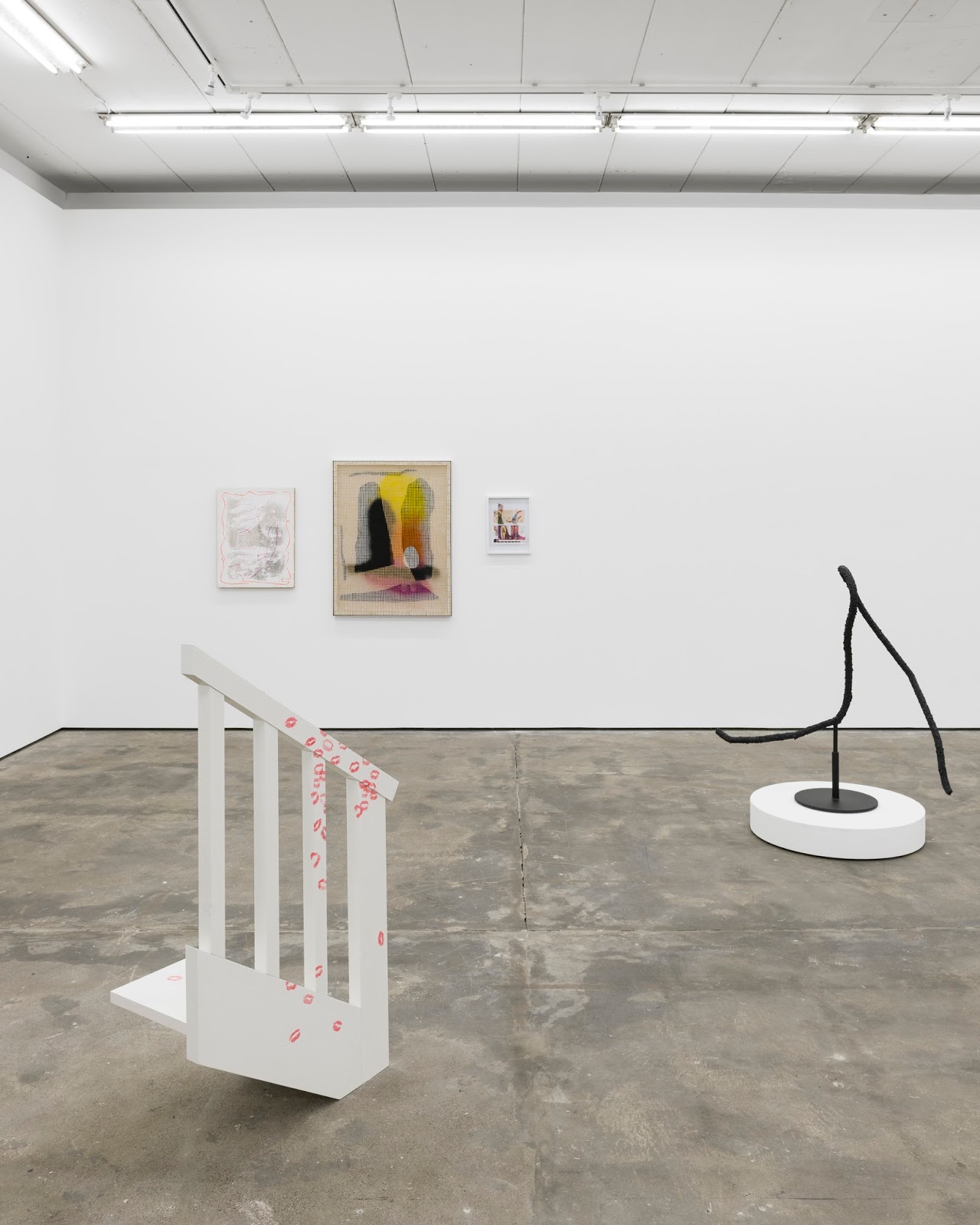 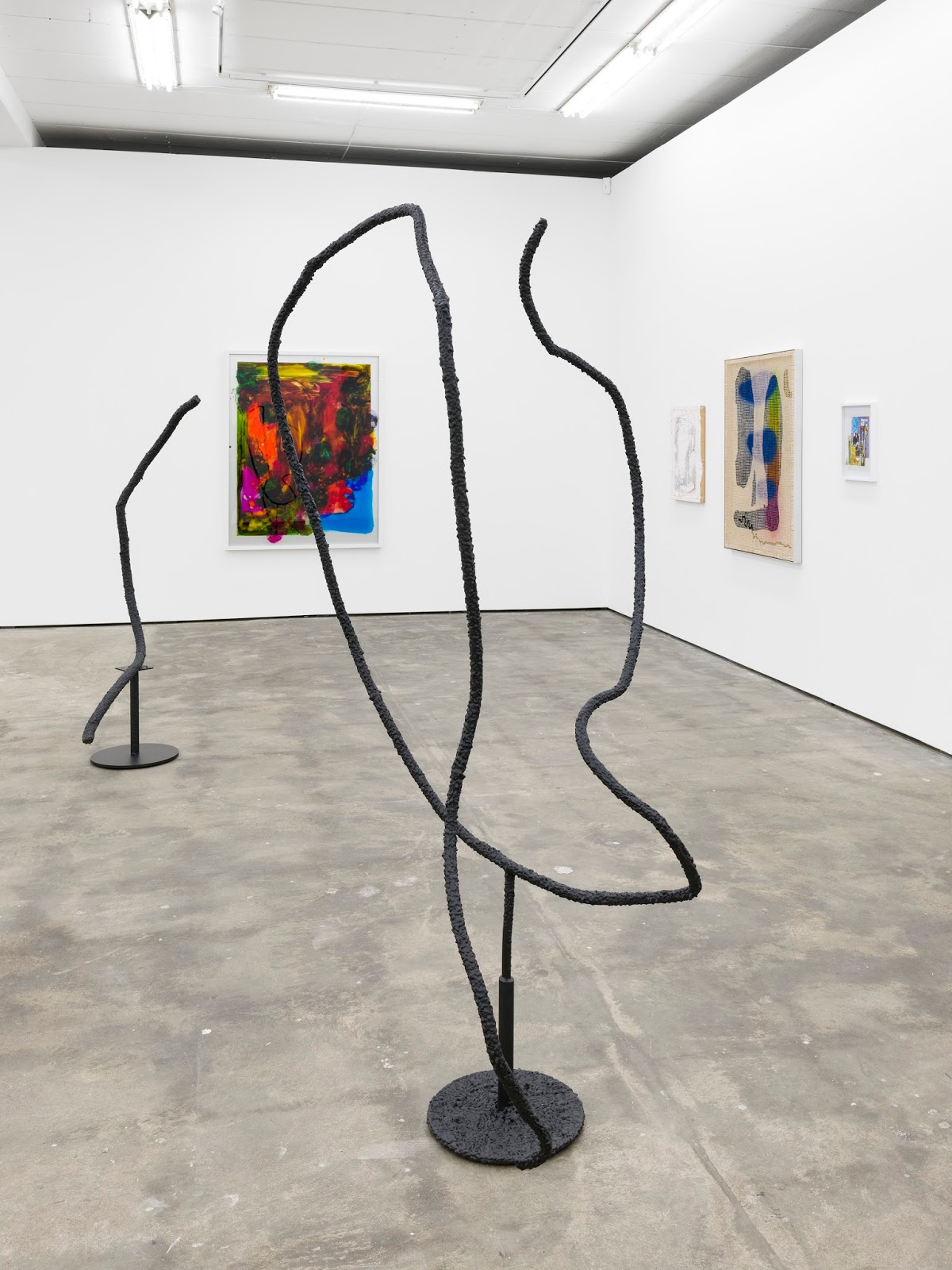 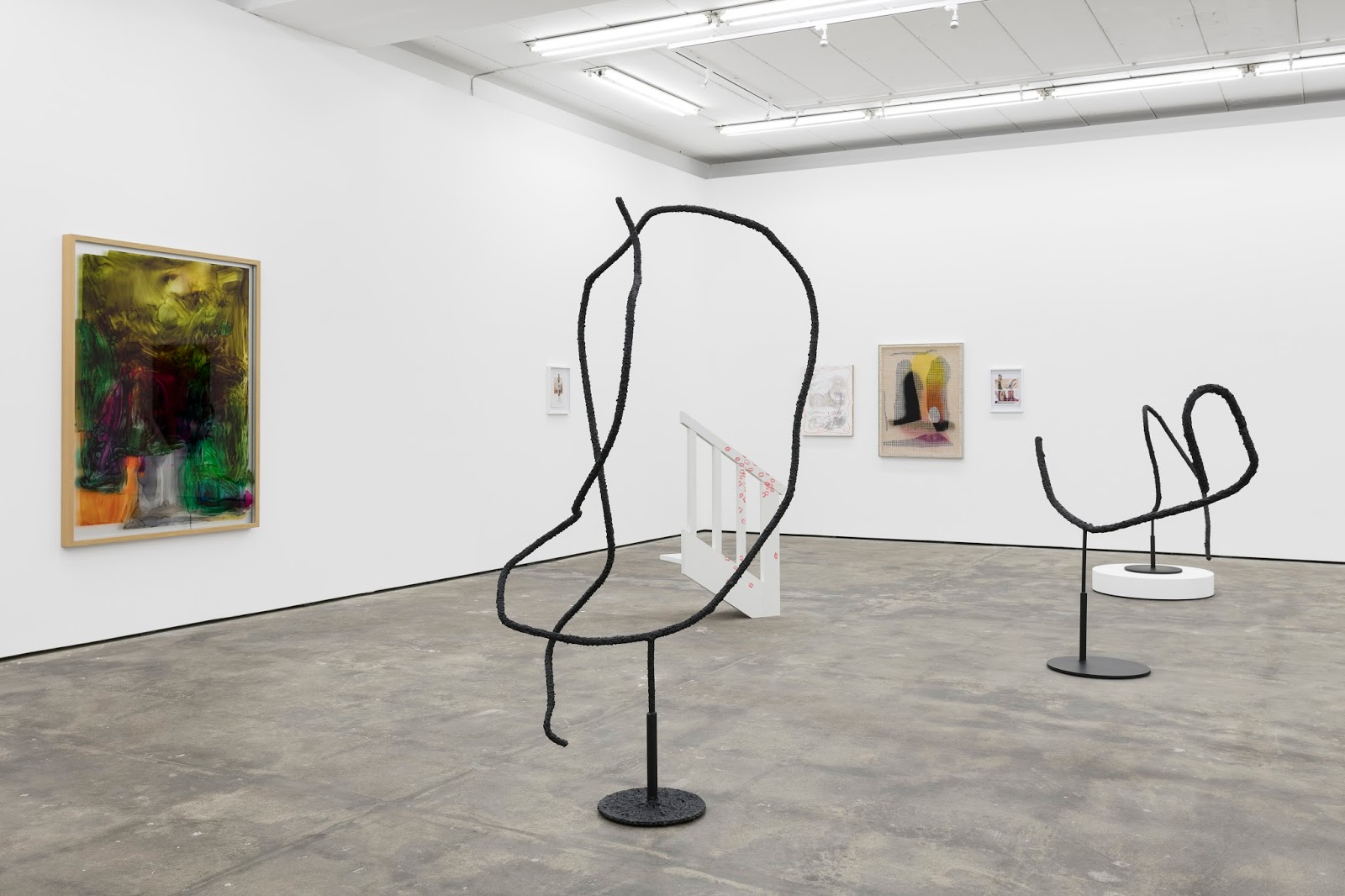 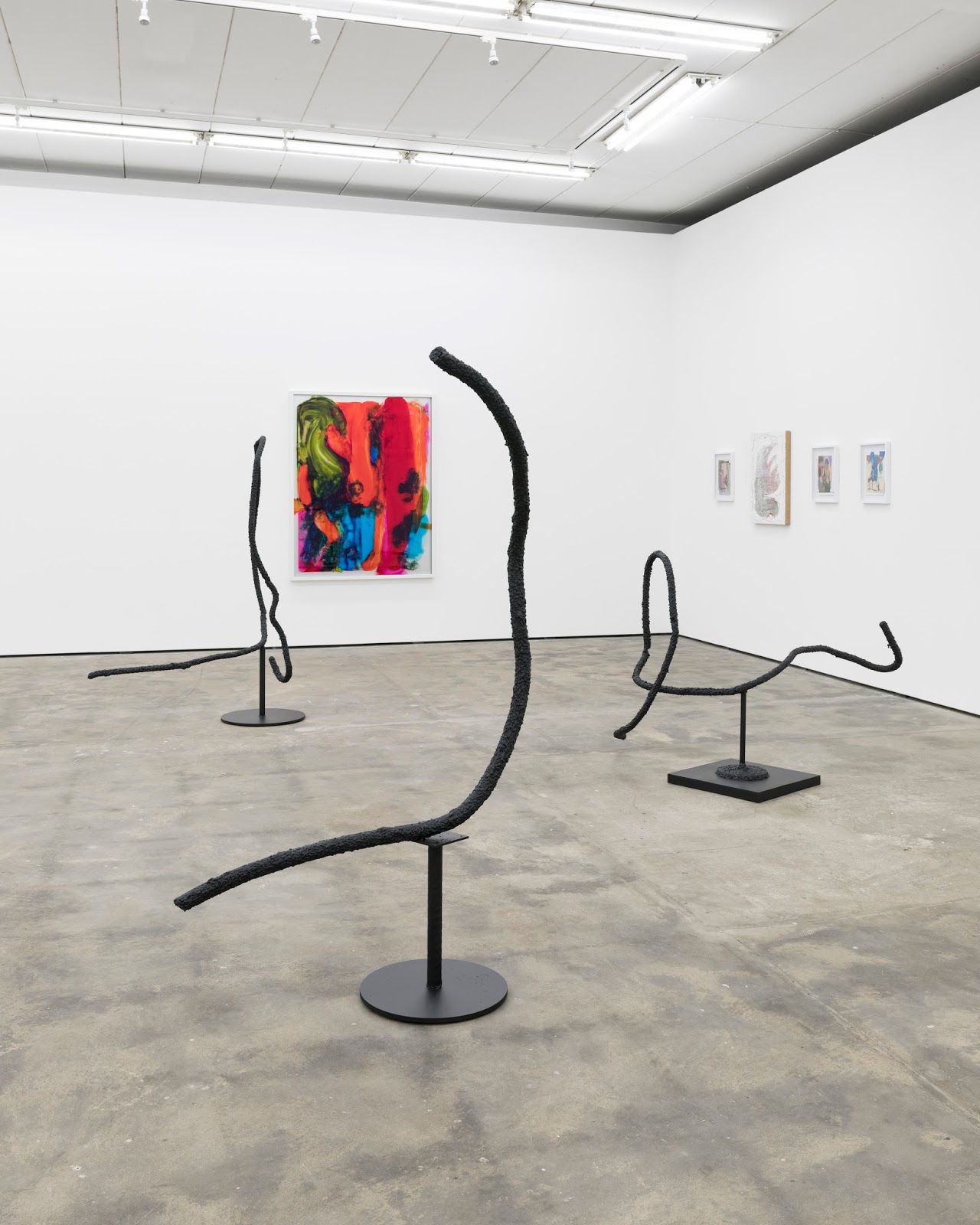 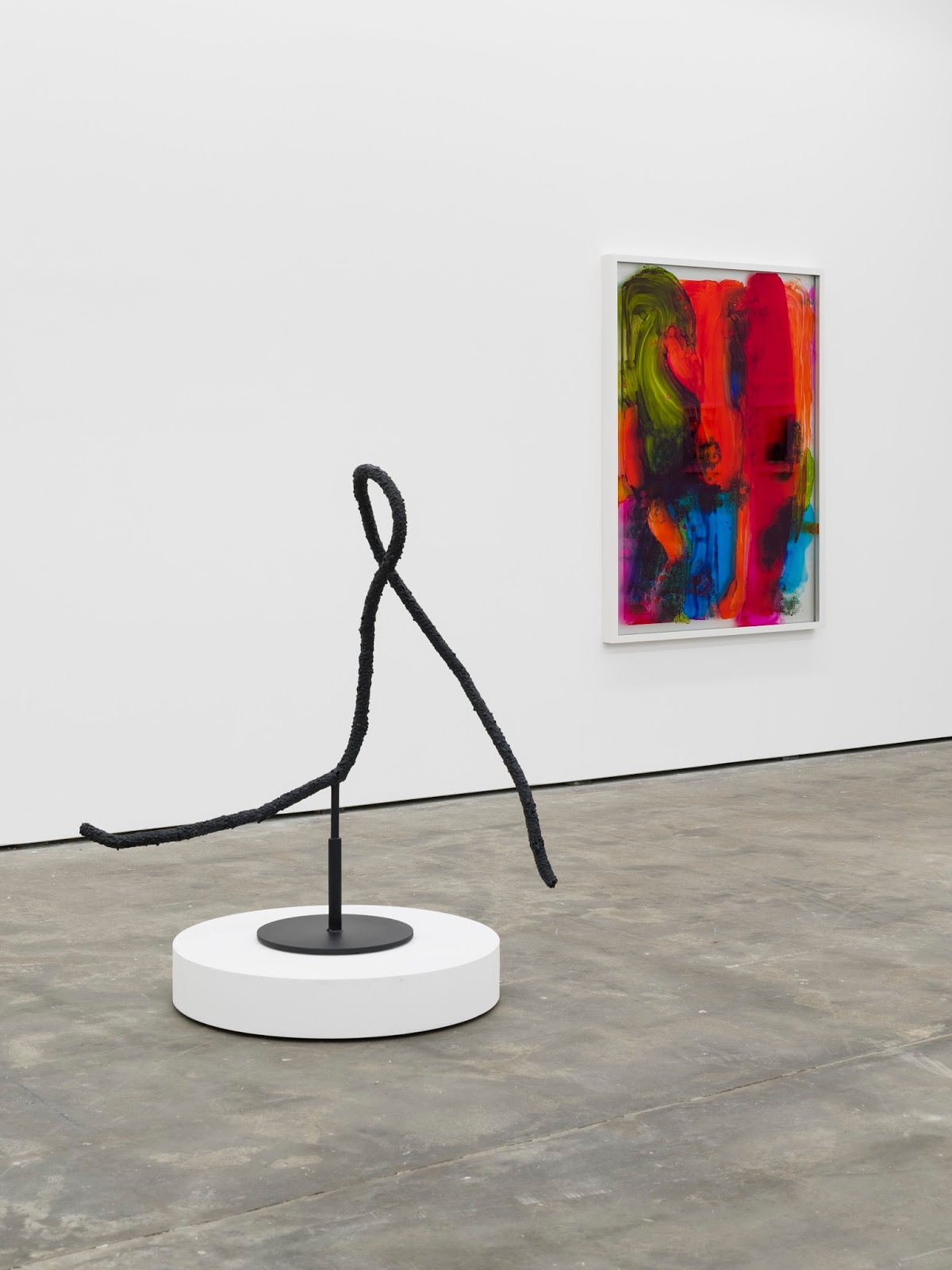 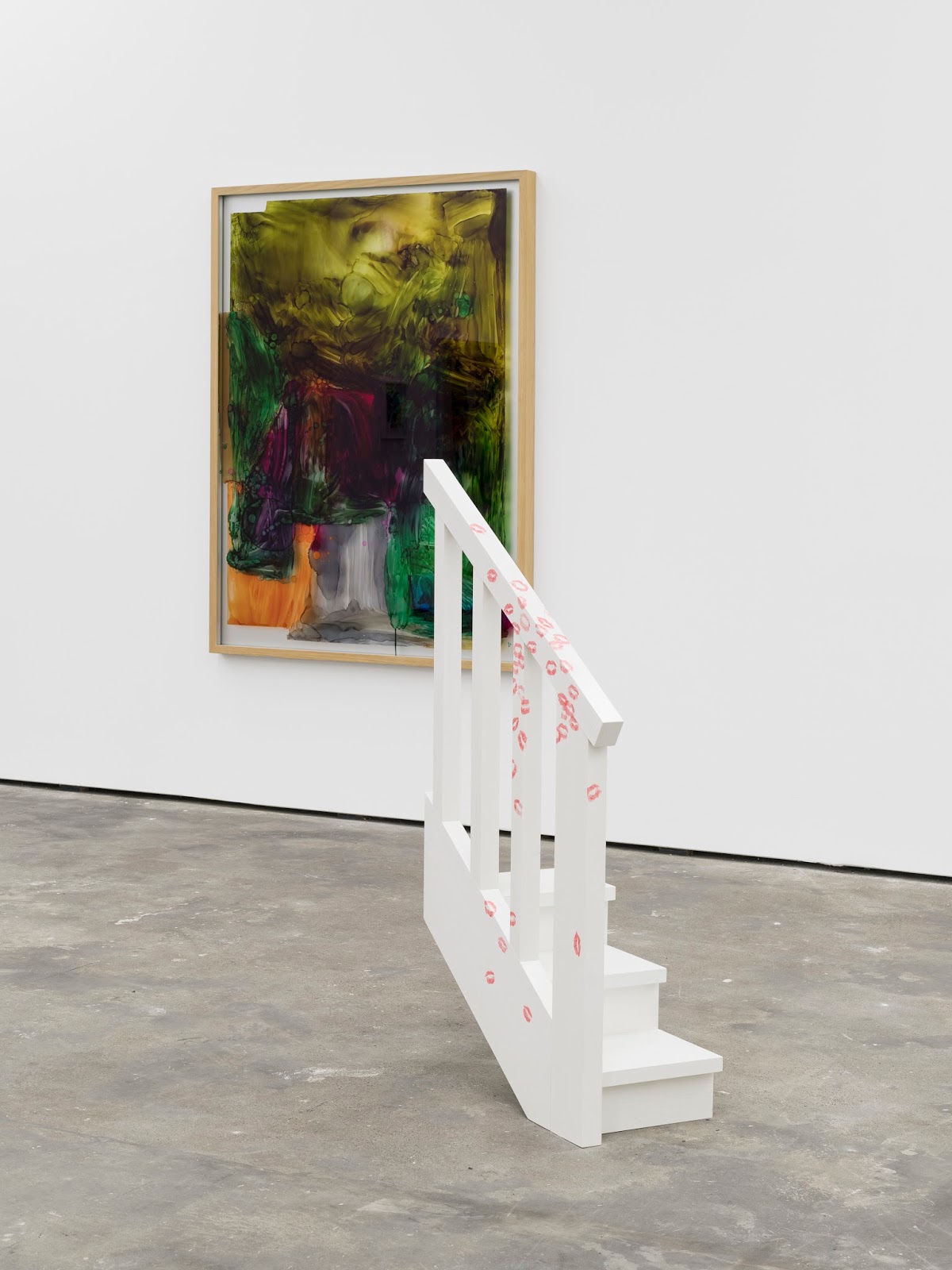 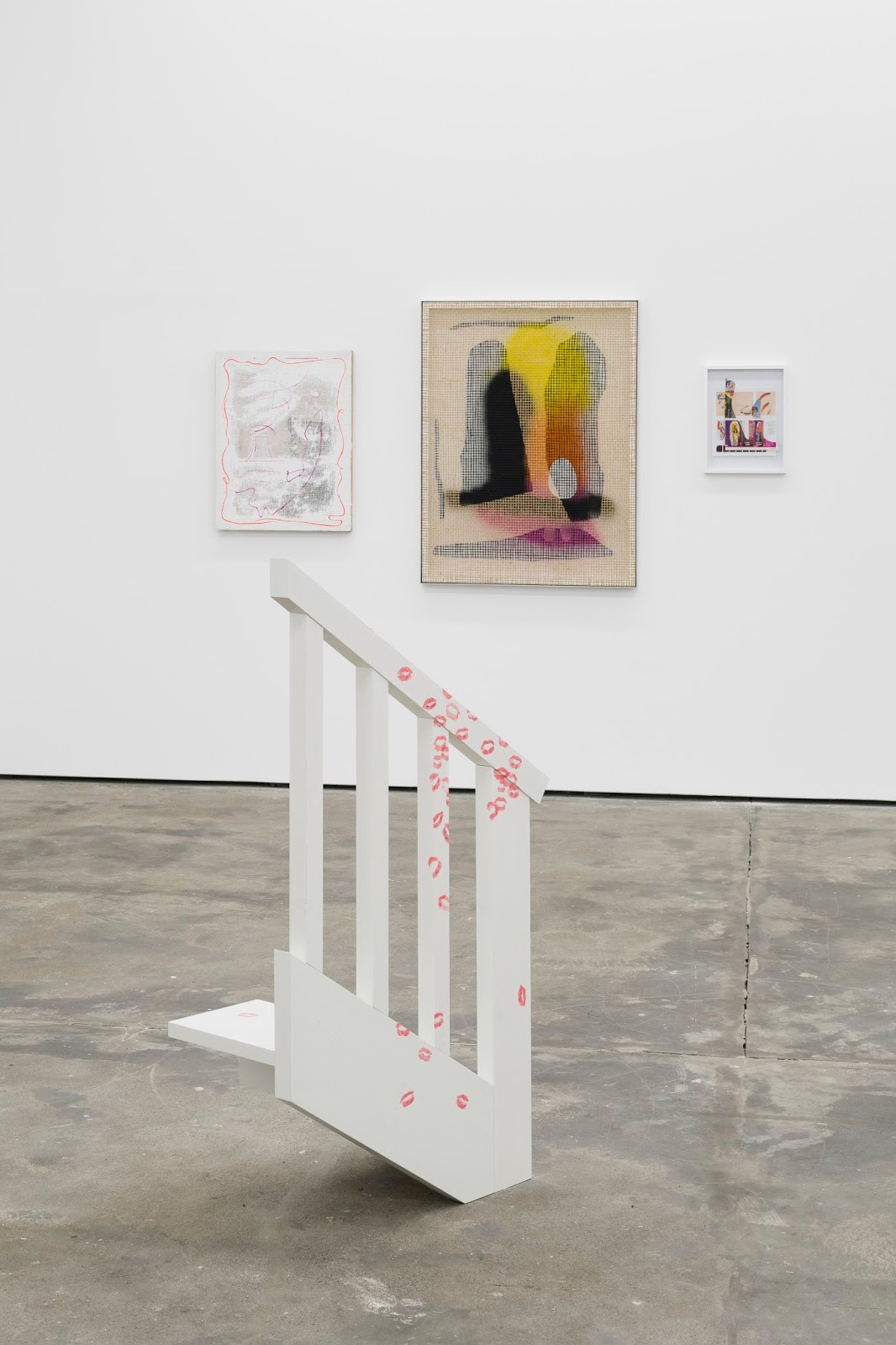 The shapes of his new black iron sculptures are reminiscent of free expansive drawings. It is possible that we don’t perceive the floating lines as sculpture. Our eye looks for references to forms, it is difficult to associate the lines with anything. We are called upon to find our own access.
At the same time, the workmanship reveals a strong reference to the figurative bronzes by Alberto Giacometti. Renggli imitates the uneven surface of Giacometti’s bronzes, which have become classics of modern sculpture, by covering his abstract sculptures with weld seams. The original purpose of this technique, which is basically to connect different parts, is cleverly misused by Renggli, who doesn’t hide this element of his craft, but rather transforms it into structure.
Visual traces, as well as traces of meaning, are emphasized without explicitly pointing to the paraphrased context. A vague promise, a dream in a vacuum, an unfulfilled longing. Similar to a melody that floats like a sketched-out slogan before our inner eye, sometimes present, sometimes not, but which nonetheless contains a whole world.
The figures don’t know a real “front” or “back,” there is no prescribed perspective. The surface structure that is seemingly naturally inherent to Renggli’s sculptures transforms itself into a new figure with a quite autonomous formal vocabulary. A dialog with supposedly original reference works emerges, but due to its idiosyncrasies in the end dissolves again into thin air.
We get to see a deliberation of the boundaries of real and unreal. At a time when phenomena like fake news and the manipulated meaning of content cause increasing confusion, Renggli is interested in consciously creating a double-edged truth that on the surface avails itself of originals without simulating its most essential guiding idea.
In an ideal way, artistic invention goes hand in hand with social research here. Like a serious parody, on the surface Renggli avails himself of the characteristic ur-elements of the genre, whose meaning he then dissects, literally playing with the surface. “The bronze,” an artistic practice that has become proverbial, is questioned, but its authority is neither derisively devalued nor ironized. The wittiness of the critique lies in the exaggerated affirmation. Thanks to this subversive act, Renggli’s sculptures demonstrate how certain materials have apparently categorically established themselves for certain situations and contexts to signify importance and valence. With this ambivalent reflection about their meaning—and their slowly emerging meaninglessness—our scale of values begins to falter. What fascinates Renggli here is the coexistence of opposites and contradictions. By limiting his “fake bronze” to a pure symbol, Renggli confronts us with the irrefutable myths of modernism, and enters into a cheerful dialogue with them.
In his collages, too, Renglli tries to fathom how the value of things is defined. Through surfaces, through content, or through other attributes? Can shells feign content, as for example celebrities do in the public perception? For his figures, he uses largely so-called “people magazines.” In these magazines, numerous pictures are used to create content that in reality has no substance. Their daily business of suggesting that something banal is important is at issue here. Desires are created artificially, and Renggli reverses this reality in a fascinatingly vexing manner. By directing his attention to color and form, and thus overcoming the content of the composition, he succeeds in dissolving the figures into an abstract image. From this perspective, in the end, we perceive only the geometric order, and no longer any pictorial representation.
The reverse glass paintings from the well-known series I love you are characterized by a bright presence of colors. The phrase “I love you” is used in an inflationary manner by the majority of people, and thus loses meaning when it is meant seriously, to describe a true emotion. Renggli transfers this principle to abstract painting, by making its sincere beauty so extremely visible that it threatens to become mere superficiality. He exaggerates the omnipresent desire for an authentic and artistic style with an exaggeratedly applied fingerprint identity.
In his grid paintings, Renggli zooms into the support material of painting, canvas, and penetrates with a microscopic gaze through the thinned out paint surface in the foreground. Through the superimposition of various levels of figures (only graphically alluded to in the foreground) on the one hand, and motifs hidden behind the wide-meshed grid on the other hand, multi-part pictorial possibilities, almost impossible to grasp, emerge in the interstices.