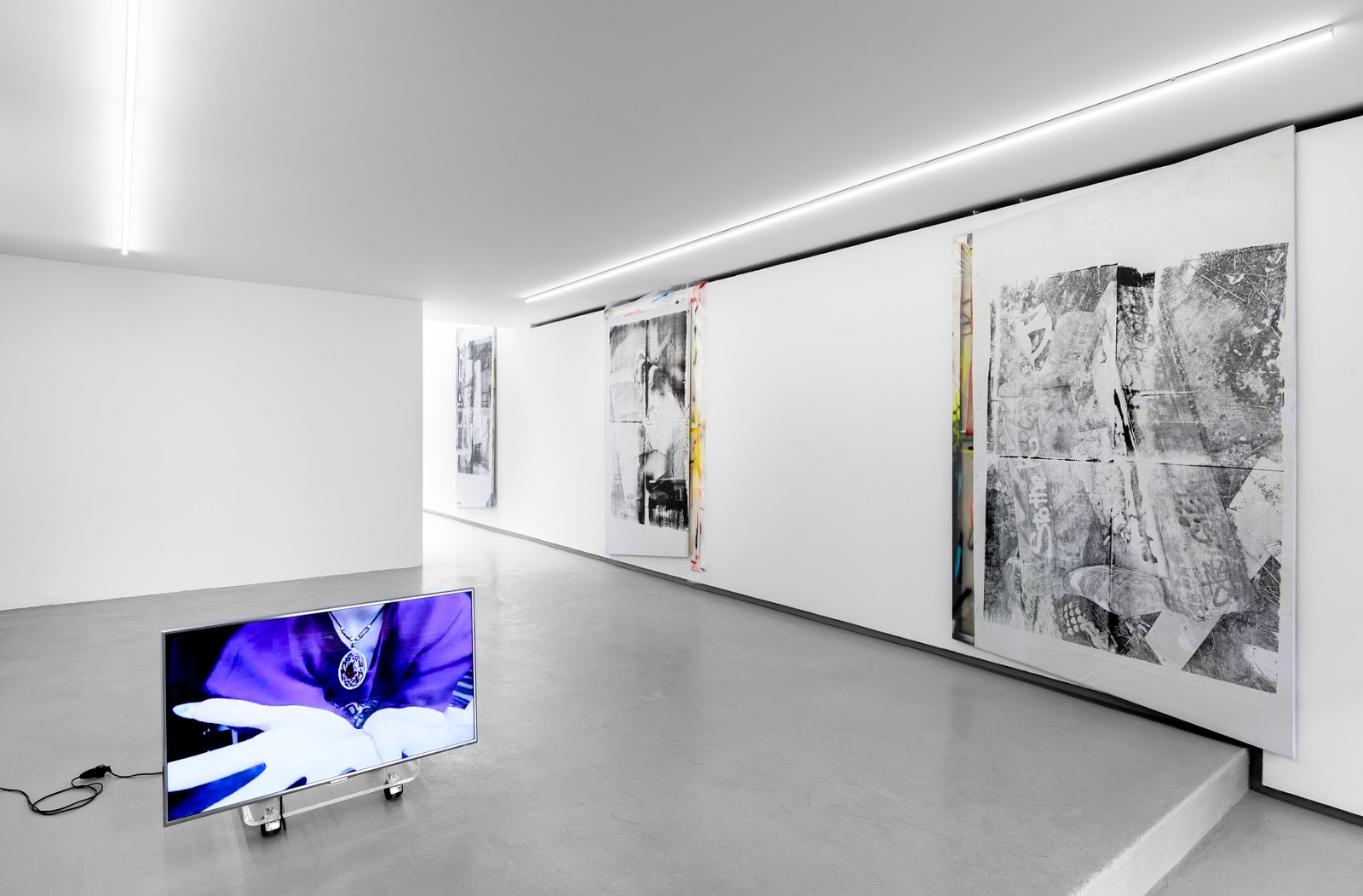 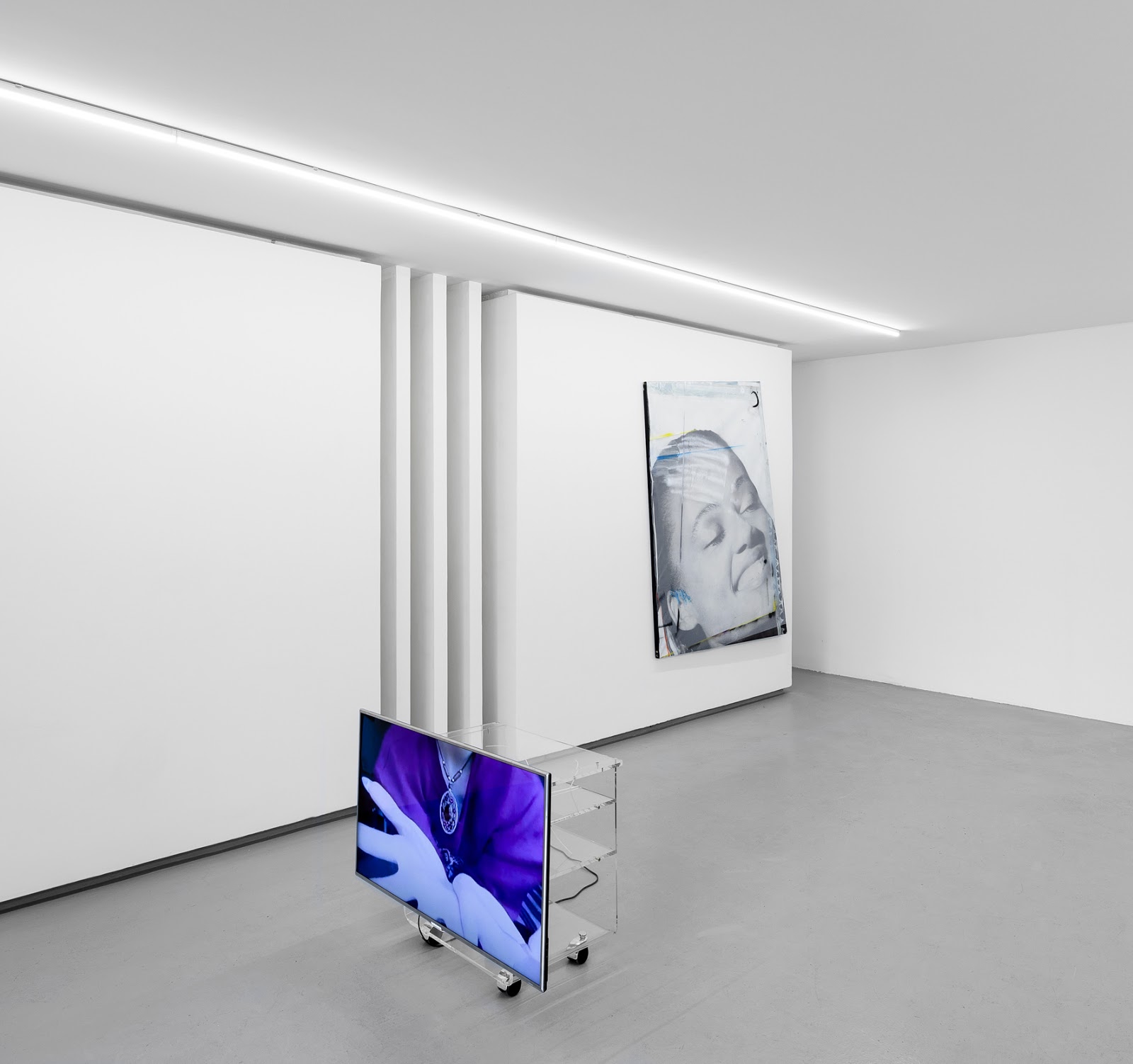 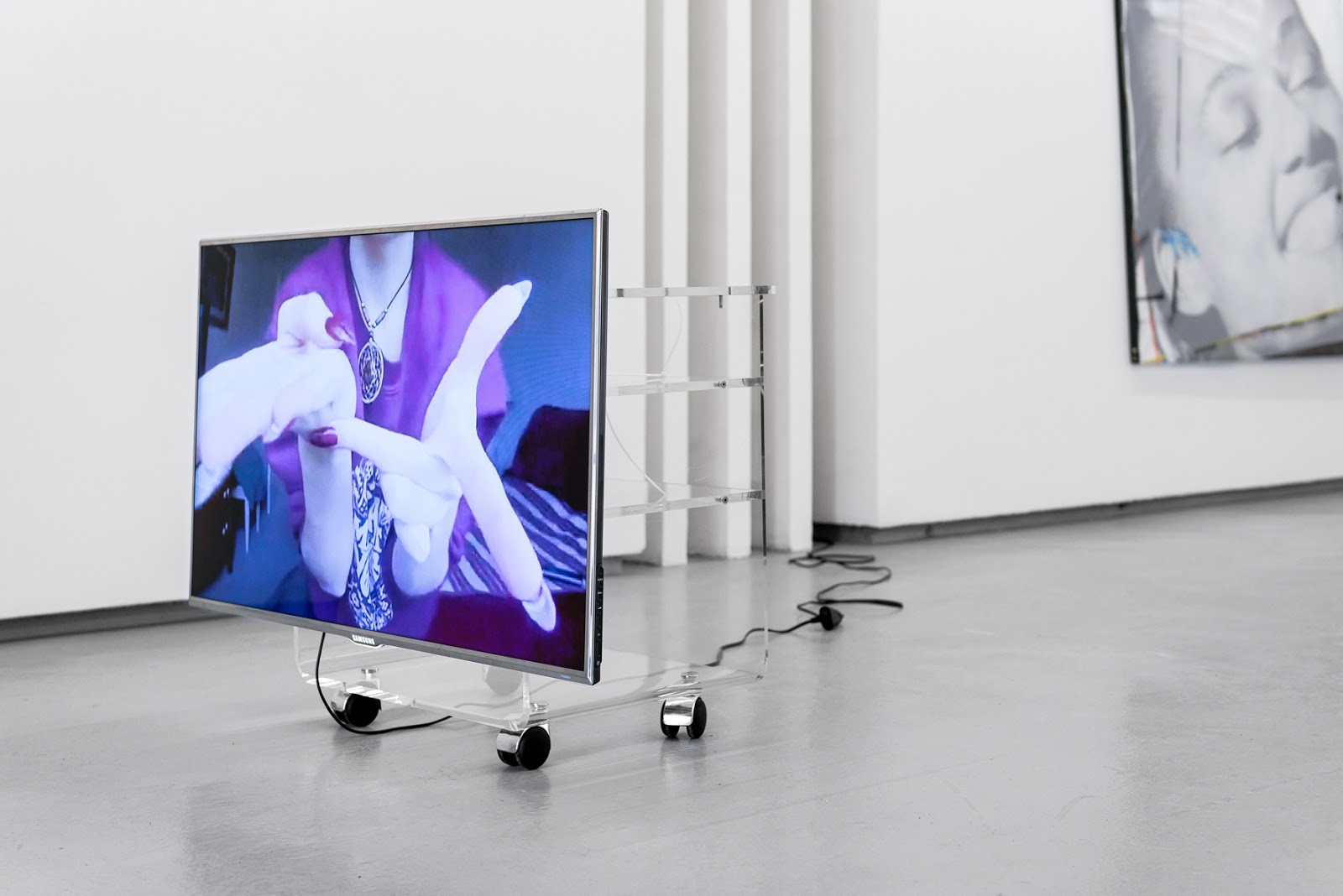 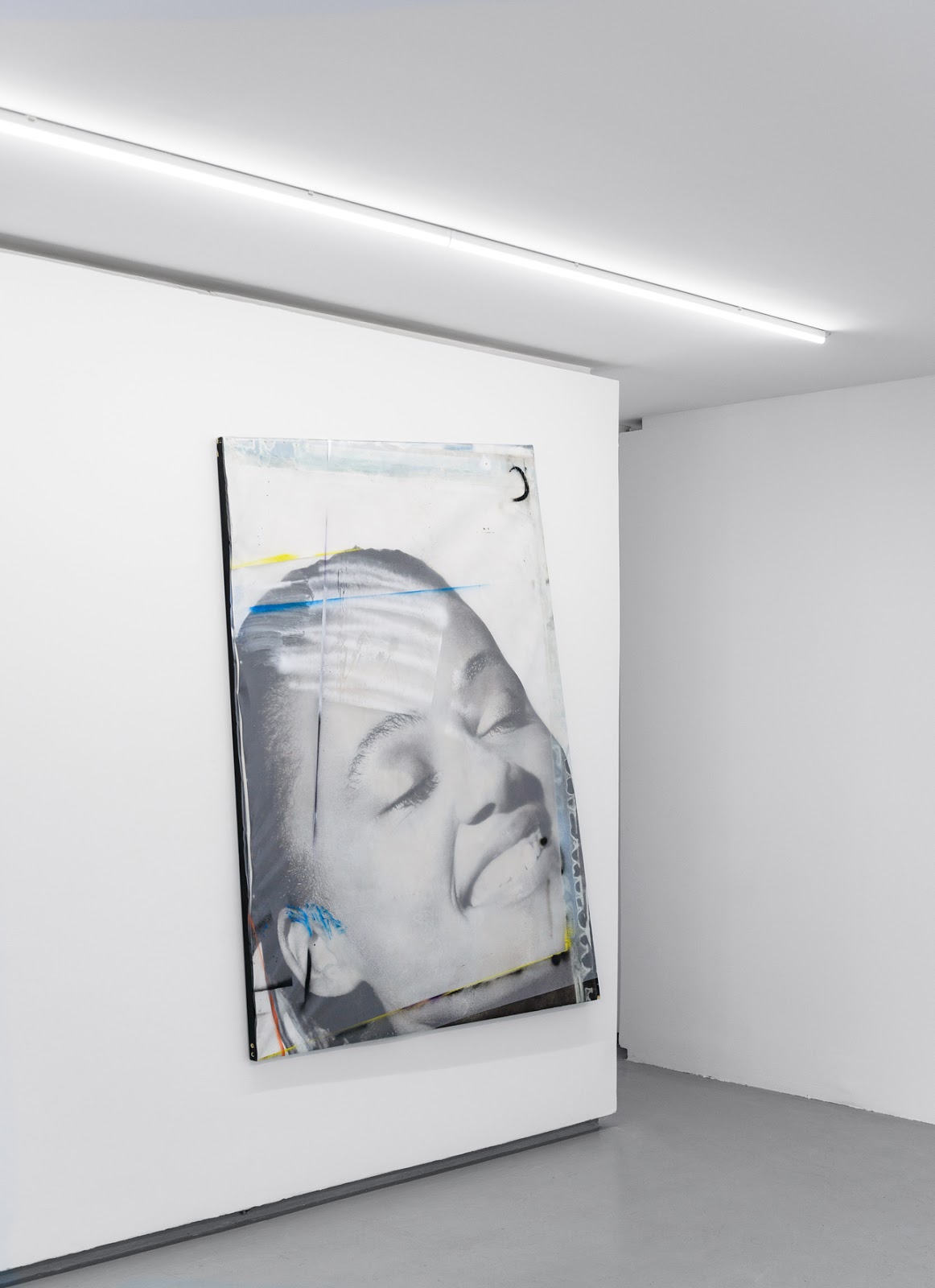 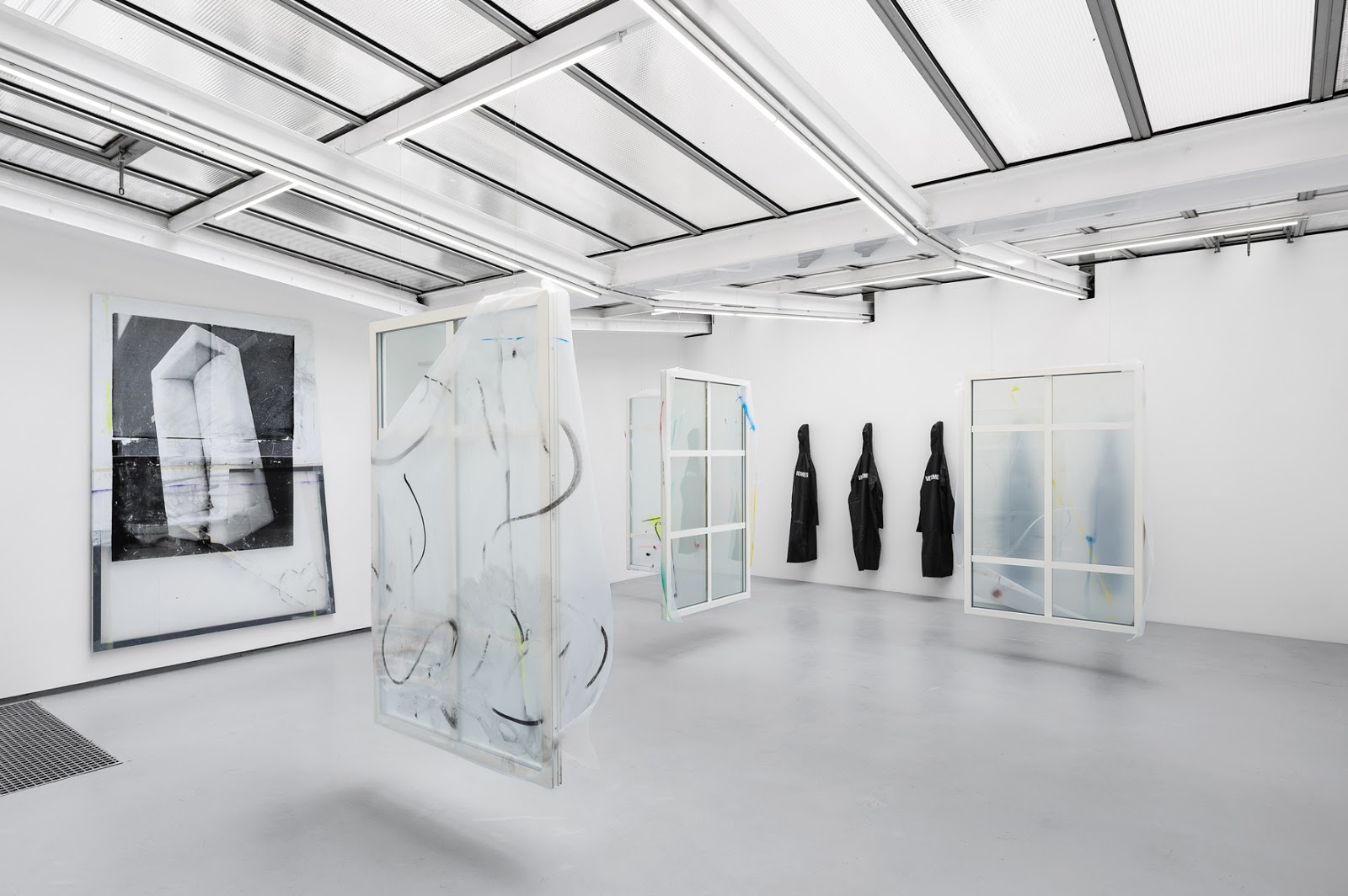 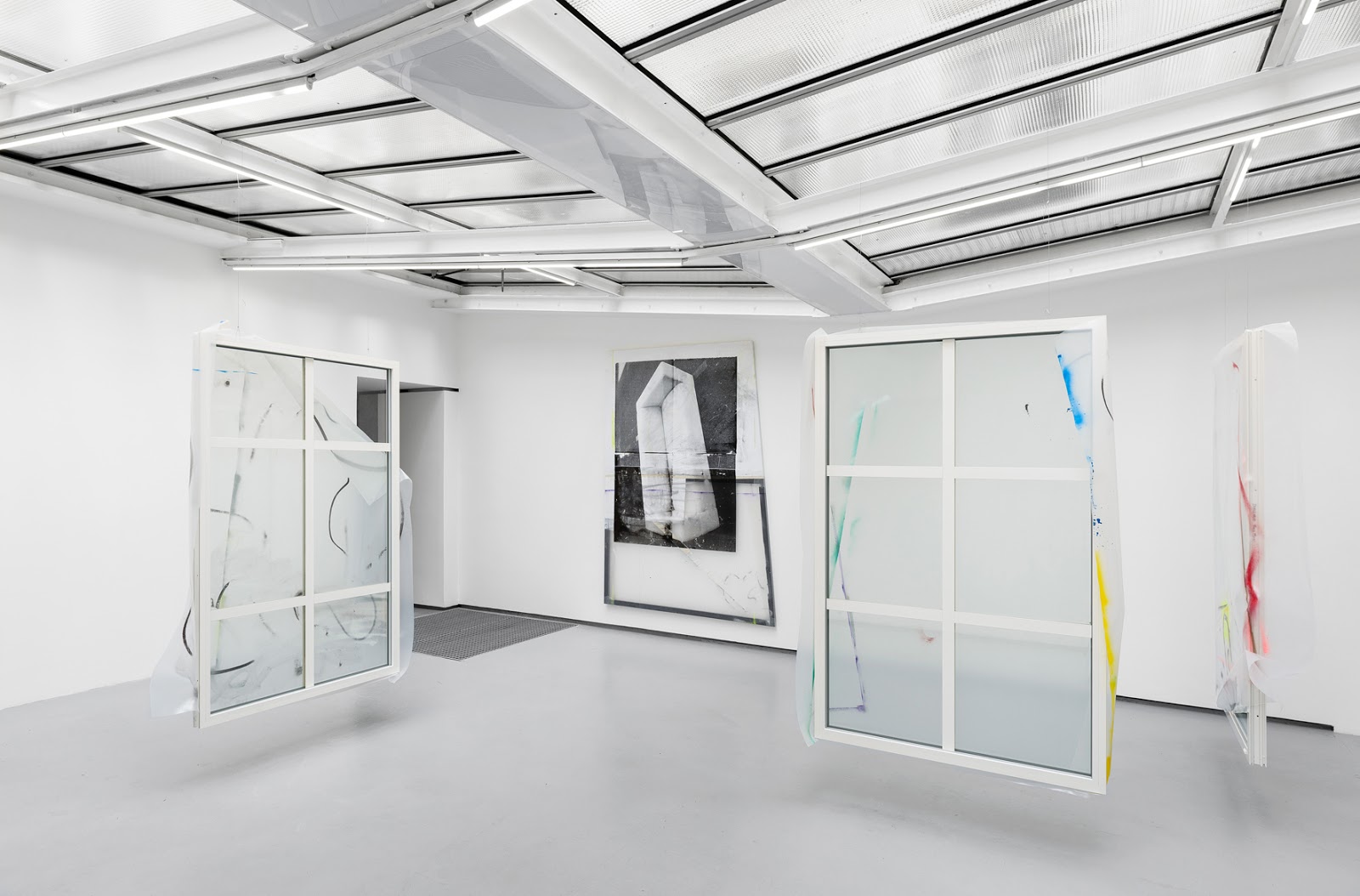 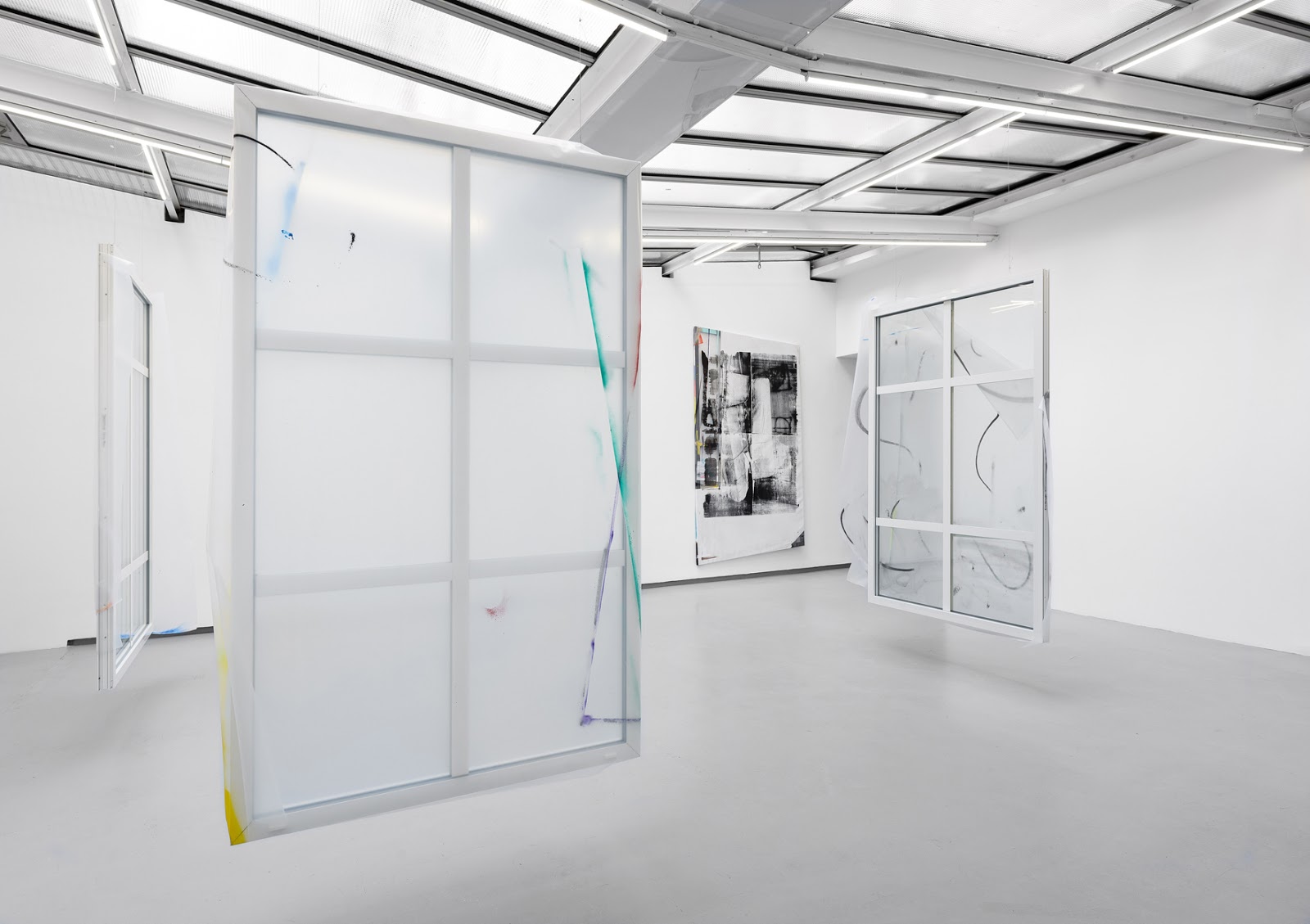 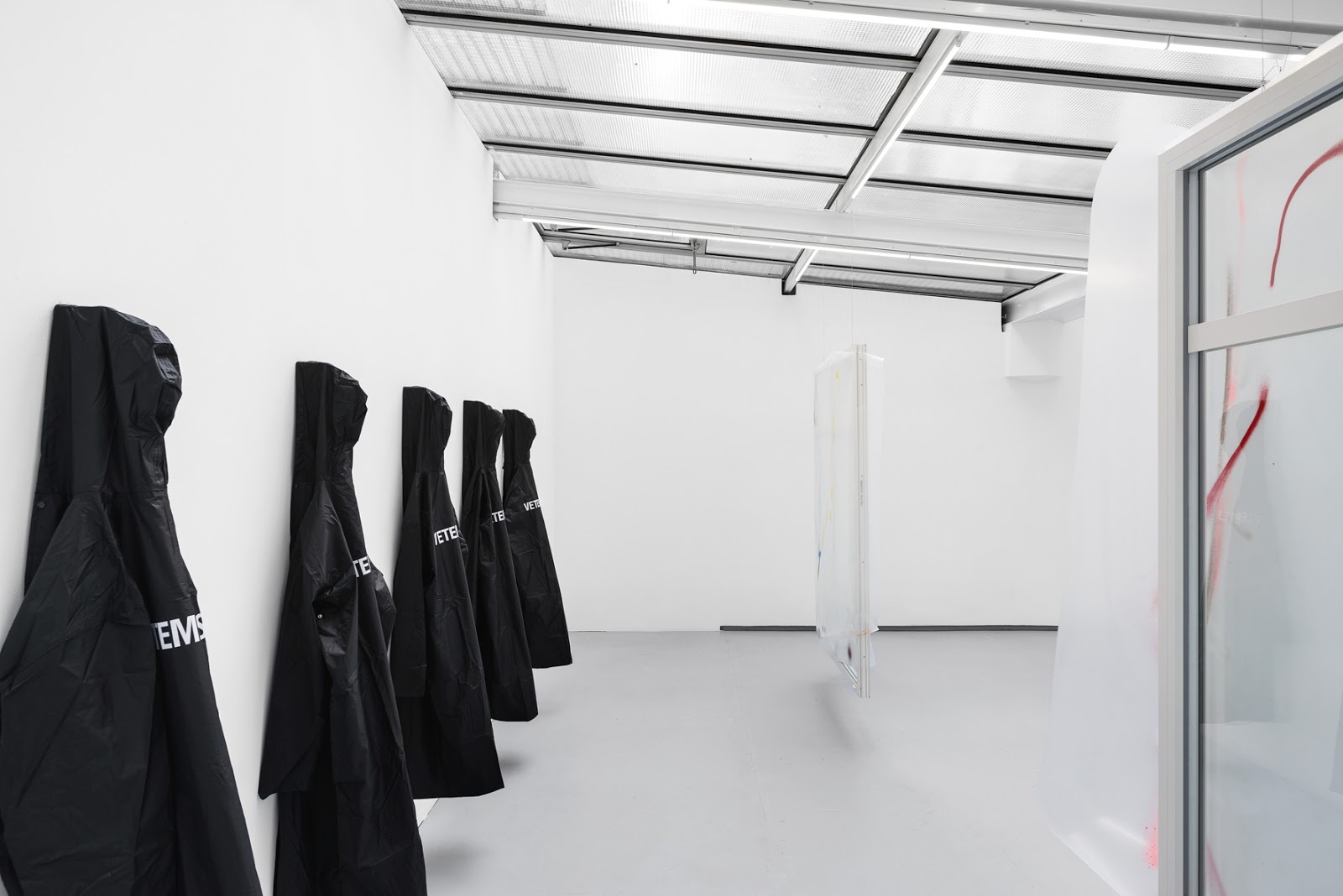 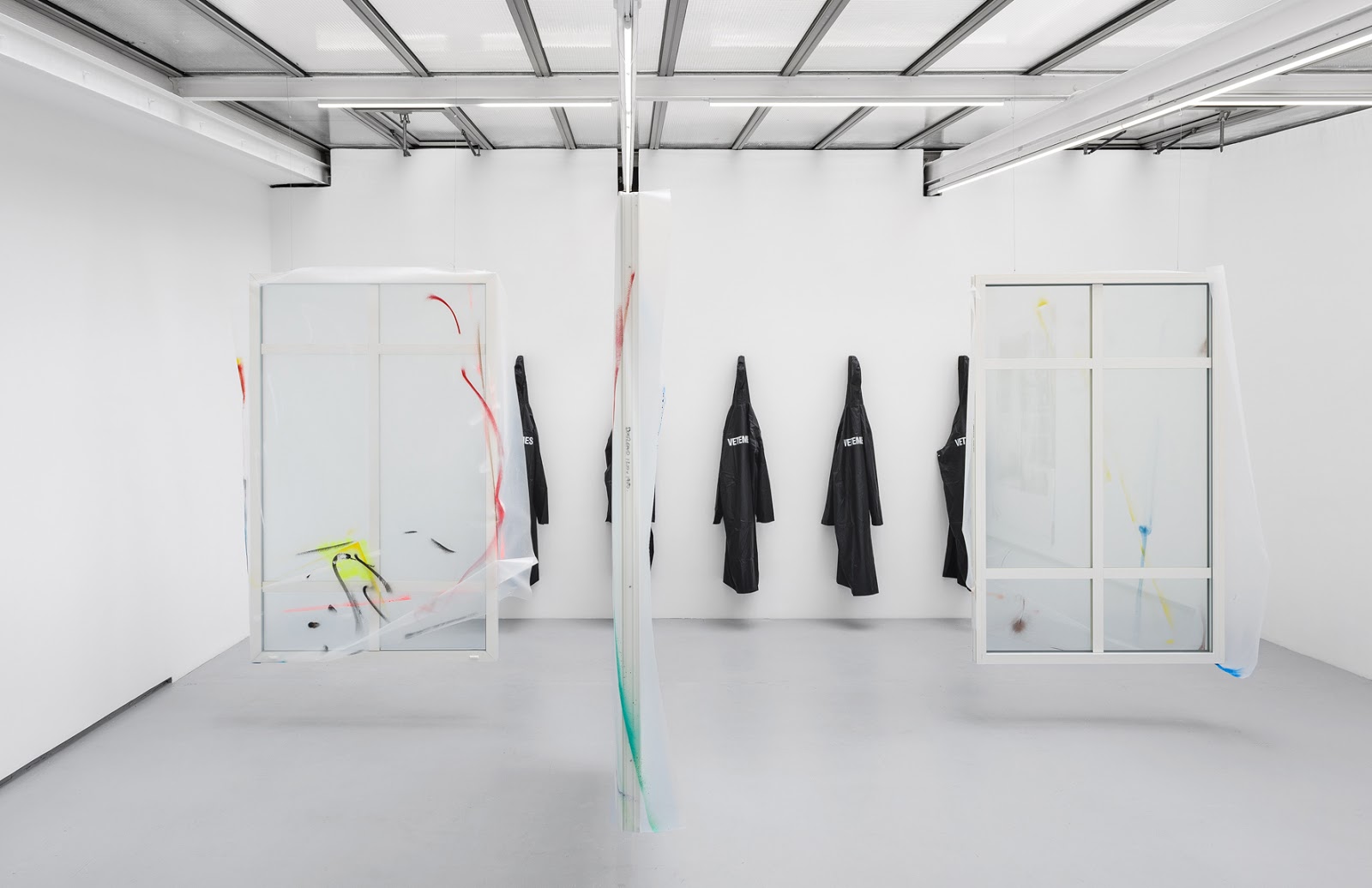 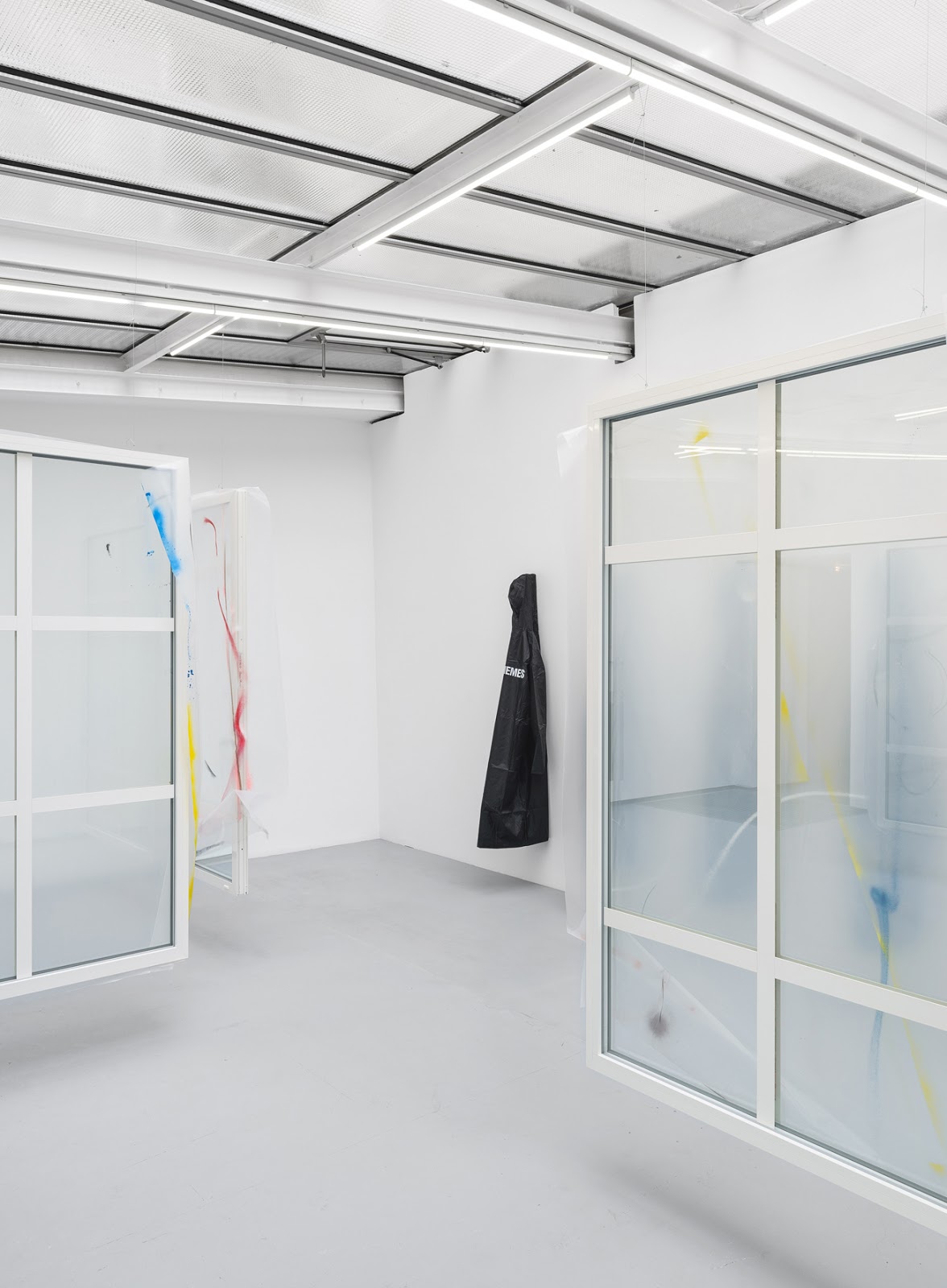 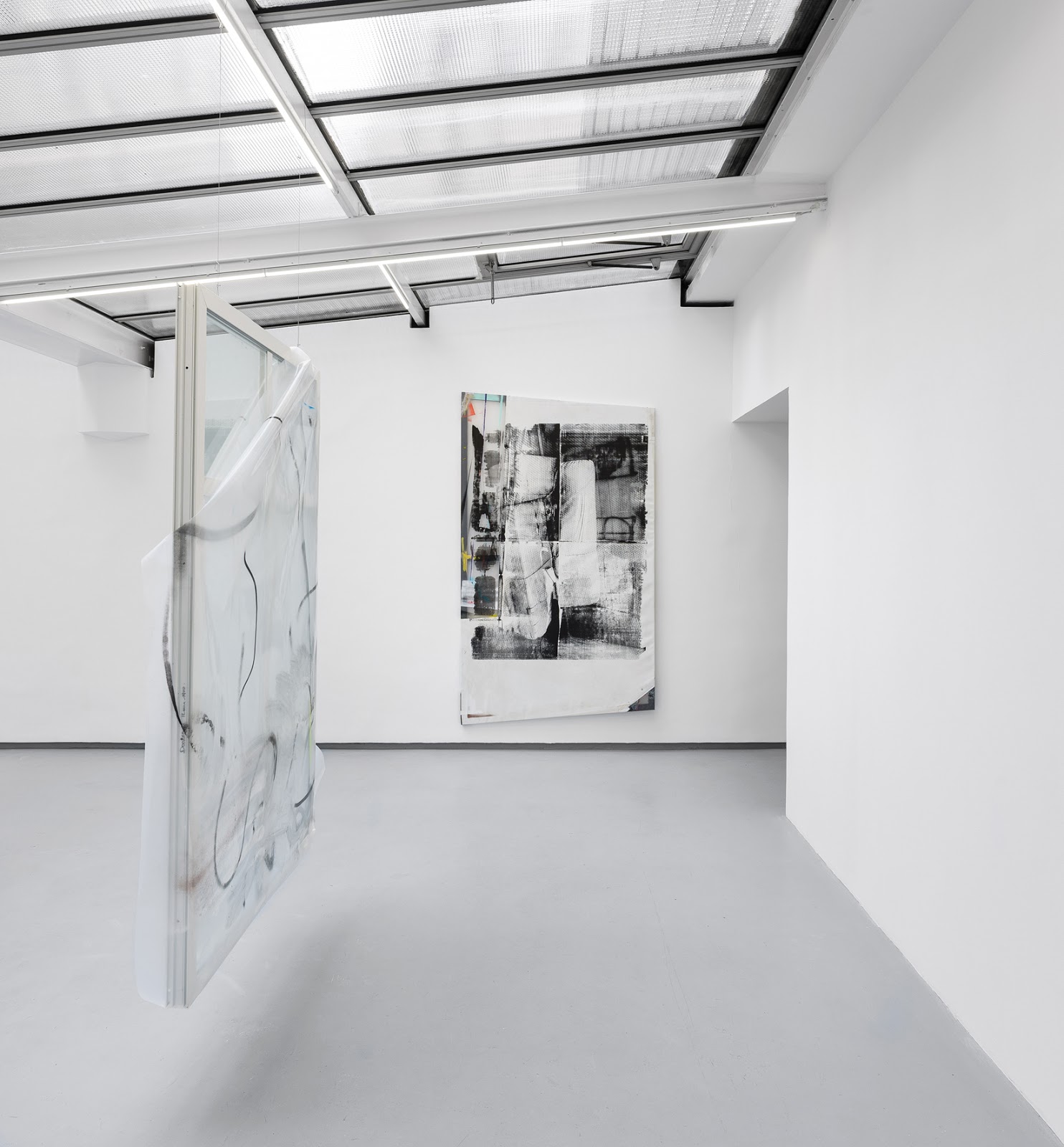 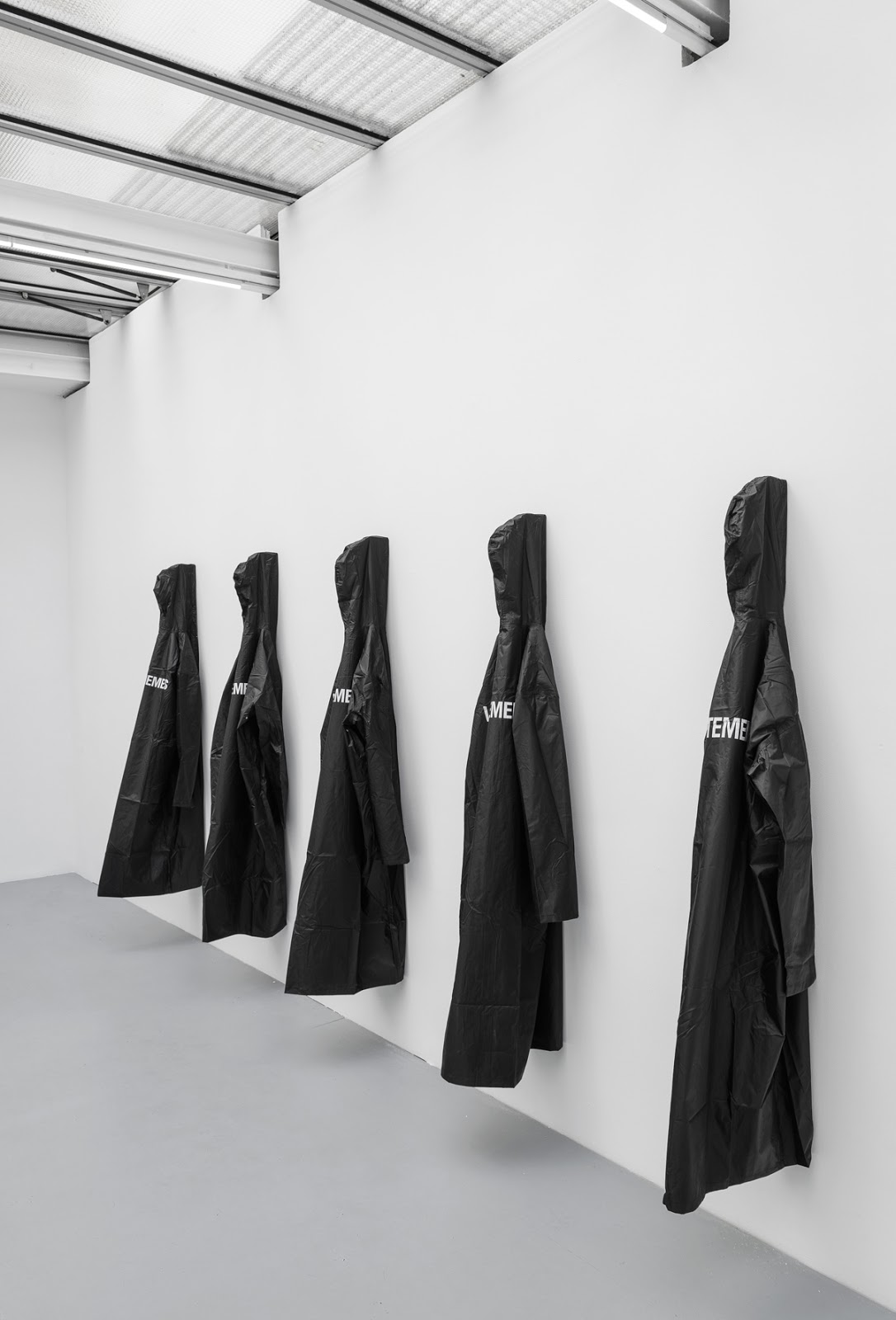 © Photo: Grégory Copitet / Courtesy of the artist and Valentin, Paris.

‘De 10h à 4h du matin’- Je vis je visser - PNL
In every of their songs - besides fancy clothes, money and trips - they rap above all else about
their routine hard work. All day everyday standing at the street corner, selling, making calls,
turning the street into an office ; stranded couches into office chairs ; dealing is like working at
the factory ; it comes down to helping the family ; in the summer going away on holiday then
coming back and starting all over again.
I wanted to reflect on these references to hard work, practice and training.
The imagery silkscreen-printed on tarp collages borrows to this street narrative while factoryproduced
windows bearing light tinted plastic sheets divide the space and induce intimacy,
echoed in the video of a teenager performing hand gestures until perfect dexterity. A series of
oversized raincoats hang on the wall like ghost figures hovering in the space ; or might be
simply a uniform to cover yourself ; while painting in the studio ; or selling drugs on the street.

We enter the gallery, passing a flight of large scale work on stretchers; imagery the artist
collected of disfunct billboards and discarded pass-by objects, sitting in the streets of his day
to day commute through Paris' neighborhoods.
In contrast to the eclectic "faire la bise", the gallery's main exhibition space presents a new
body of "transparencies", reminiscent of previously produced, semi translucent two-sided
paintings. Prefabricated window panes carry foil the artist decorated individually with his
default signature mark making. Lined up along the gallery walls are Vetememes coats the artist
tracked down online, miming the street - turned high -fashion label Vetements; the artist
conflates network tongue with anonymous production standards, defining a language around
individual and communal production within the economy of appropriation.