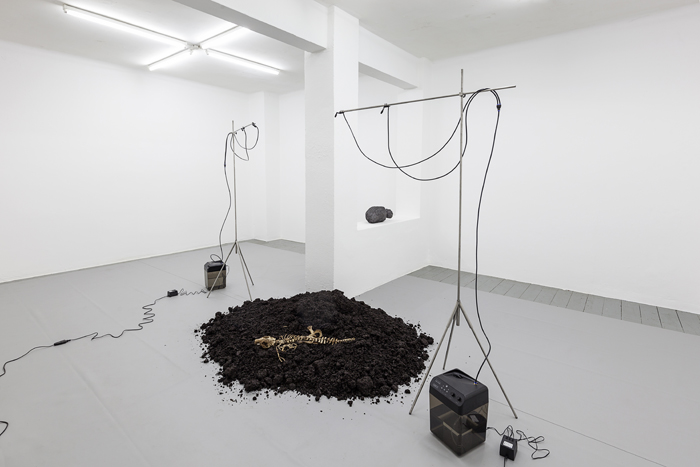 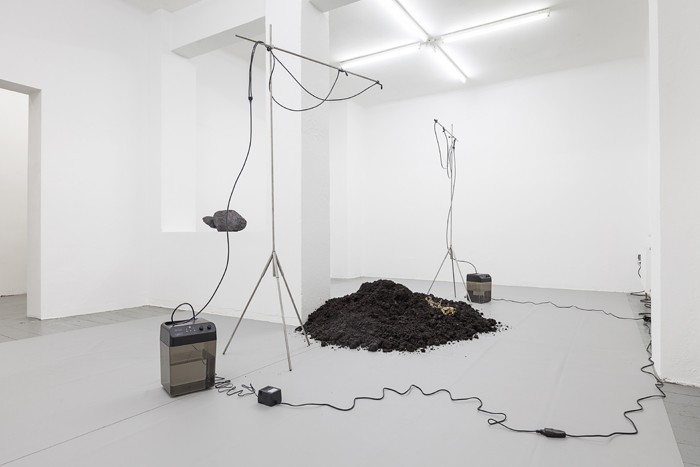 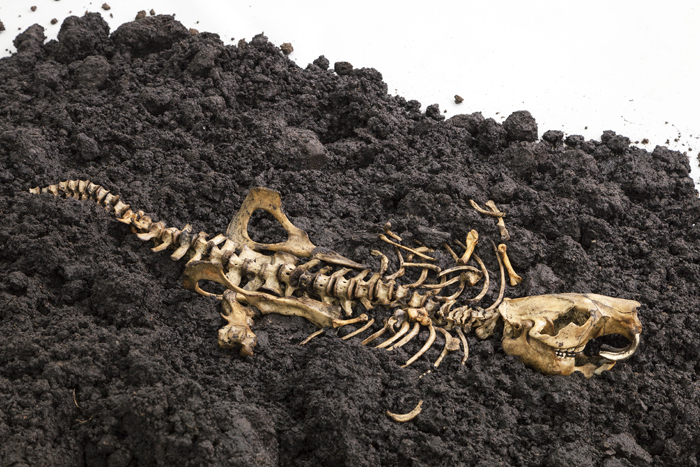 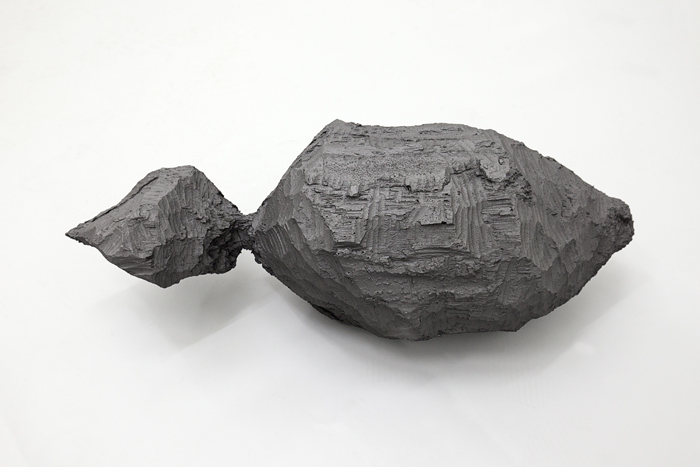 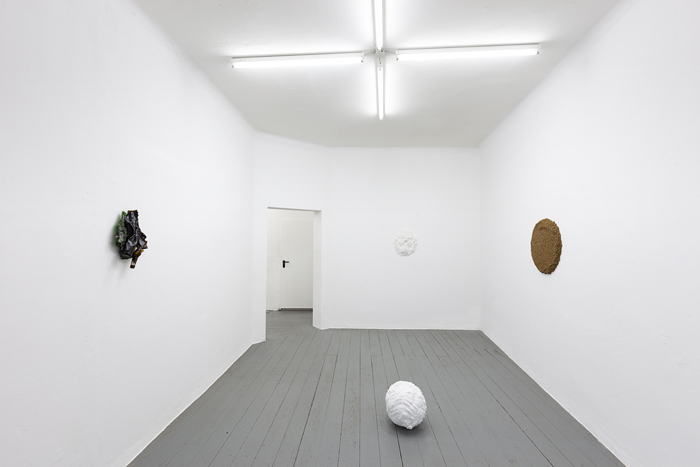 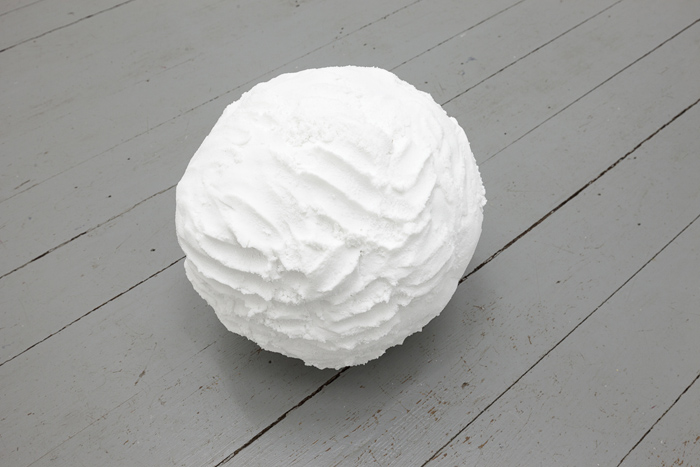 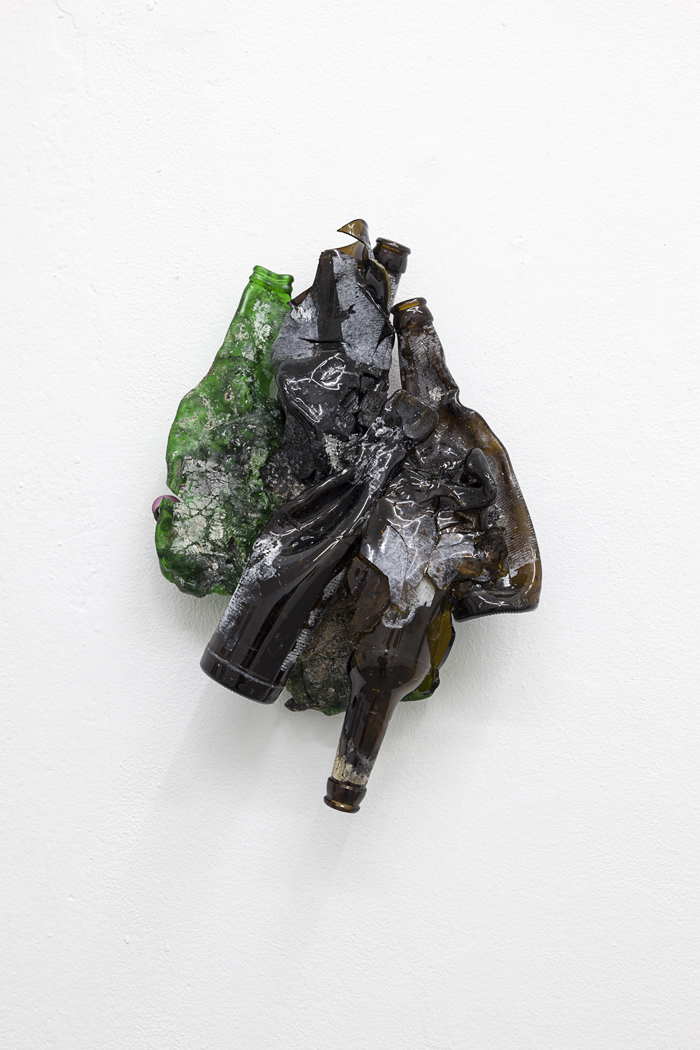 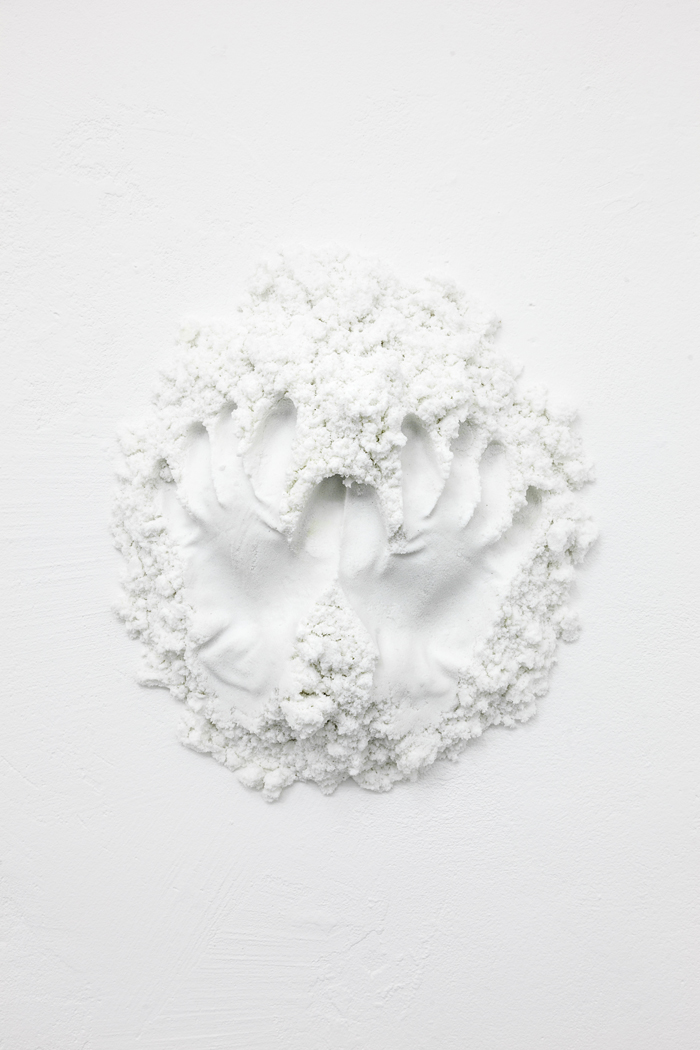 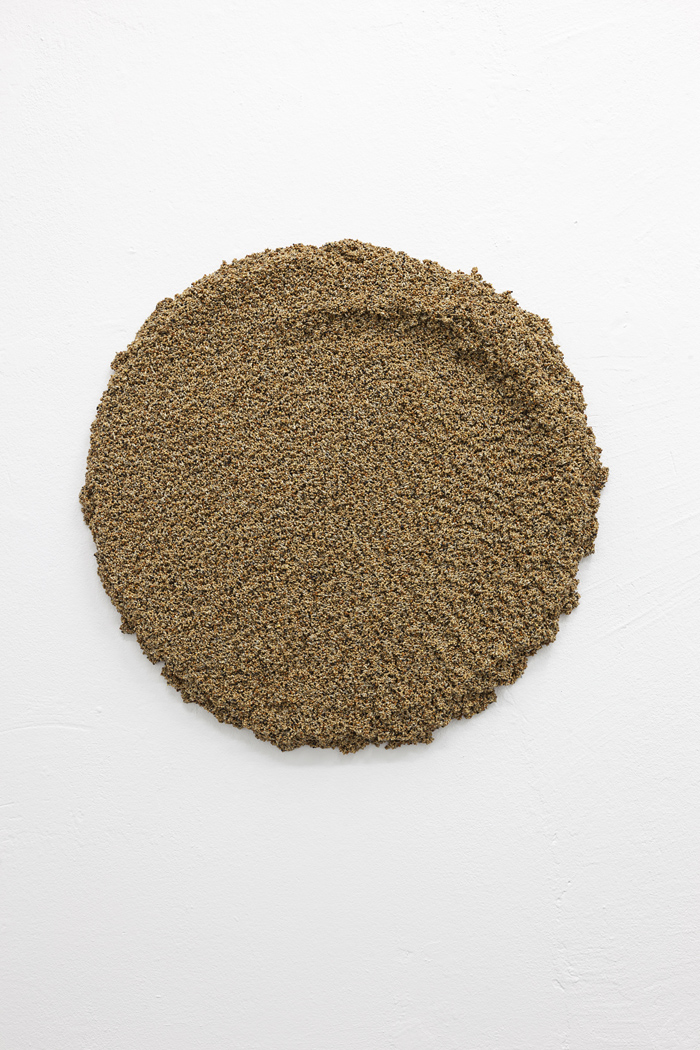 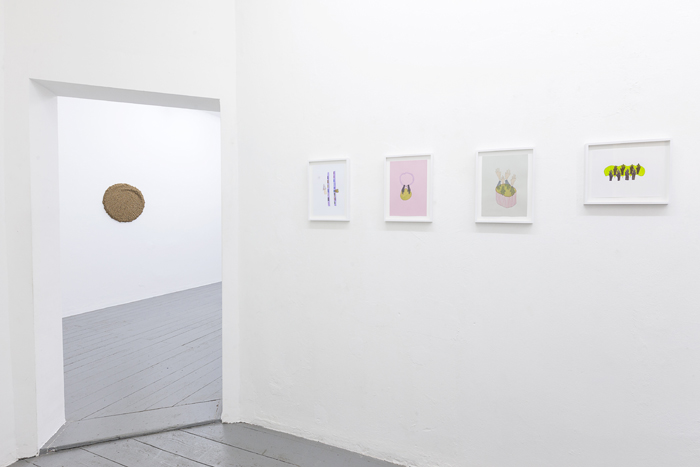 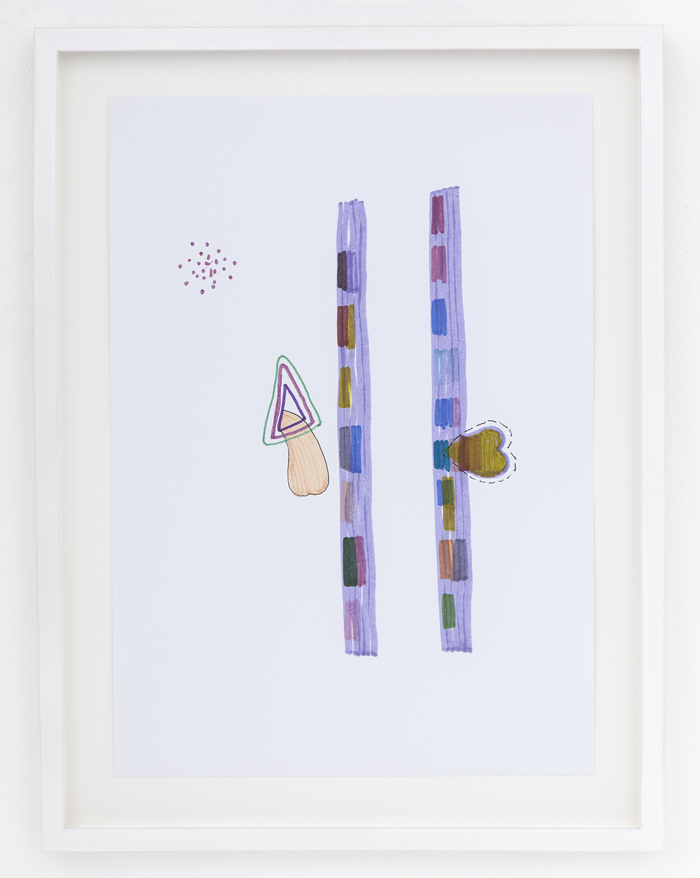 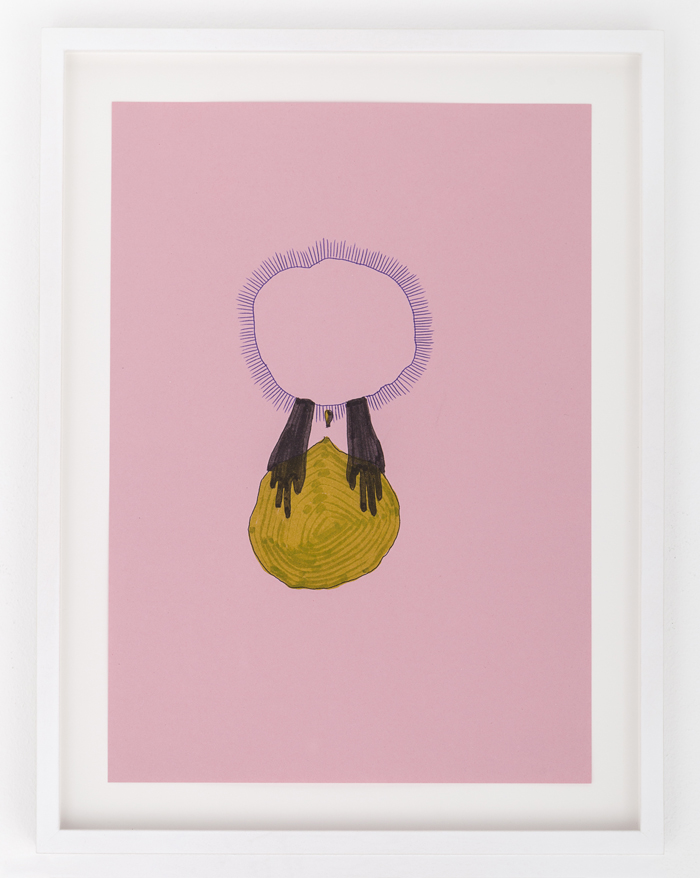 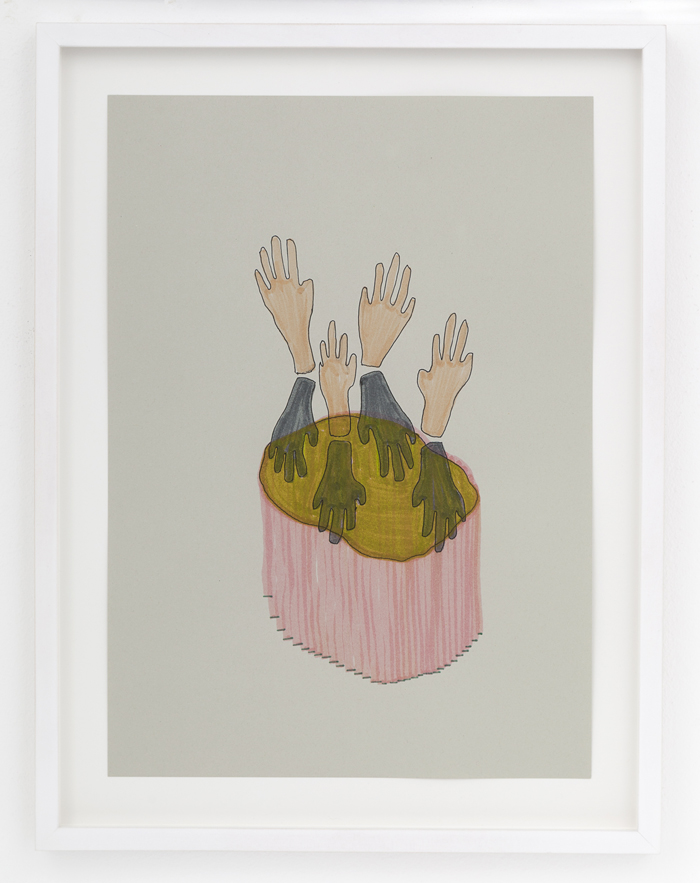 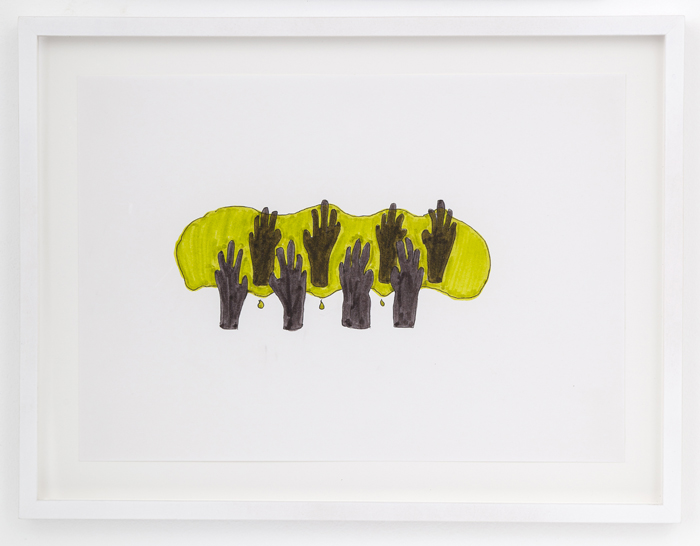 The beaver’s image is pretty bland. Aesop portrays him as a rational animal: frugally handing over his most prized possession - his genitals - at the moment of danger. In the fable he is the clever and eager wood dweller, in Goethe's Reineke Fuchs he appears as Bokert, the diligent notary and clerk of the king. The beaver is not superhero material, unless it comes to toothpaste commercials. And yet he plays the role of motif and accomplice in Jan Bünnig’s new work “Mein Künstler wurde aufgefressen“, 2015 (“My artist got eaten”). The unwearying, even compulsive worker that Bünnig sees in the rodent has been chosen as representative for his own artistic practice.

The animal, or rather its remnants, are the central aspect of the work: a wetland diorama – kept moist by a monsoon irrigation system from the pet store. The base of the diorama is made of healing clay, a material that Bünnig has often worked with. Fragments of sculptures made of polyurethane lie on the surface. Bünnig has adapted their form from beaver-gnawed trees. Brancusi's endless columns also come to mind, gnawed-on wood, plants, residues. Only the skeleton of the once industrious rodent remains. It sports a single golden tooth. The resulting space is in a way spiritual: a visual reflection on creative excess, stress and strain, but also on questions of authorship: on producing or having produced.

“Wir machen dich zum Klops”, 2015 (“We’ll turn you into a meatball”) is Bünnig’s second work in the exhibition. This work also illustrates, albeit in a different way, what is most important for the artist’s practice: the creative process and not necessarily its result. The sculpture was formed in 30 minutes and is the result of a collective, sculptural act. It is large snowball in winter gloves: a conglomerate of synthetic resin and aquarium sand.

All of Bünnig’s sculptures possess a raw and almost archaic quality. They elude interpretation and seem disconnected from time and space – as if they were from far-off worlds, or relics centuries of years old. Often the works seem not quite finished, as if the artist’s process was interrupted or they were snapshots preserving a moment of transformation.

Bünnig analyzes the properties of the materials he uses and their transformations from one state to the next, visualising these for the viewer. Perhaps one could call him a ”material’s companion”. The contrasting banality of his materials of choice - Bünnig finds them at the hardware store or even in the forest - and the alien strangeness of the forms he creates from them brings tension to his work. His objects often continue to evolve in the exhibition space, developing a life of their own – sometimes apparently at random. And sometimes a beaver’s paws are in the mix.

Jan Bünnig (born in 1972 in East Berlin, lives and works in Berlin) has completed an apprenticeship as a metalsmith and studied at the University of Arts in Berlin, in the class of Tony Cragg. He has had solo exhibitions at Galerie Tobias Naehring, Heidelberger Kunstverein, Akira  Ikeda Gallery, Tokyo, New York, Berlin, Neuer Berliner Kunstverein and participated in group exhibitions i.e. at the Neue Nationalgalerie in Berlin, Den Frie, Copenhagen, Berlinische Galerie, Städtische Galerie, Dresden.