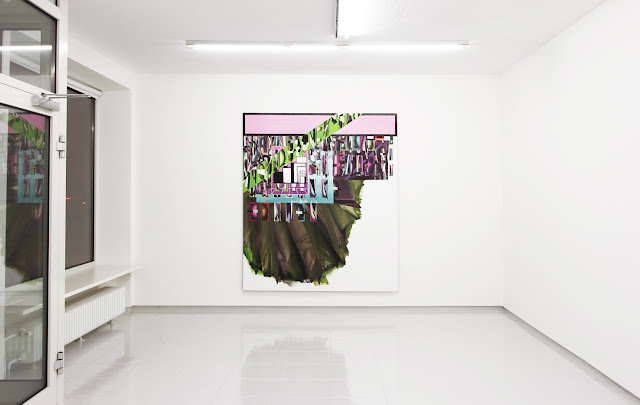 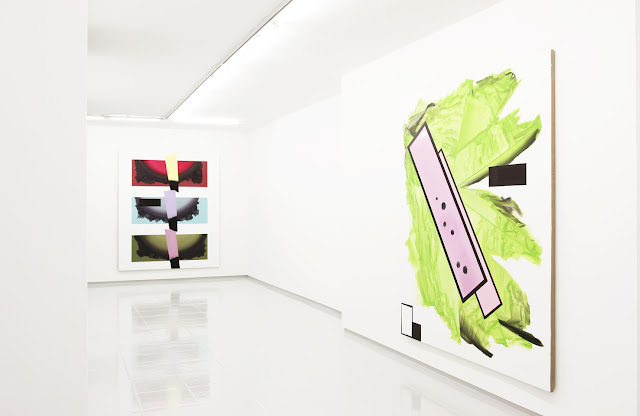 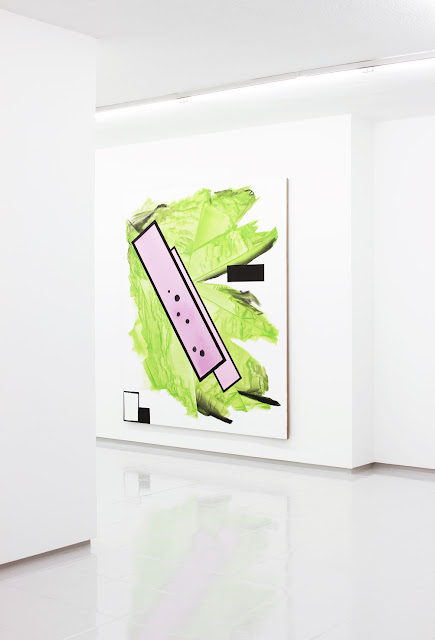 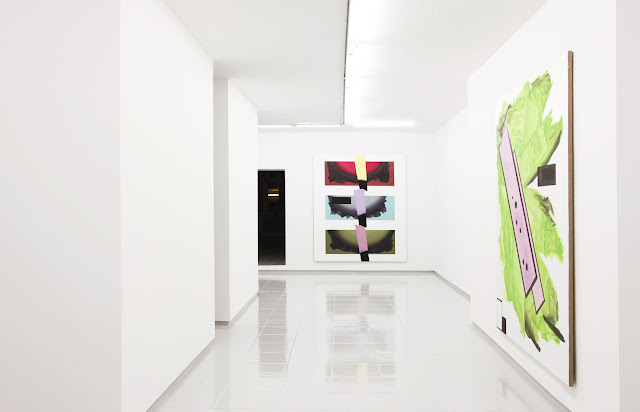 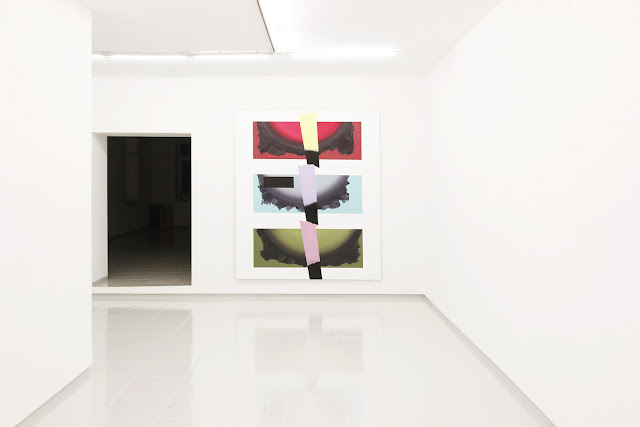 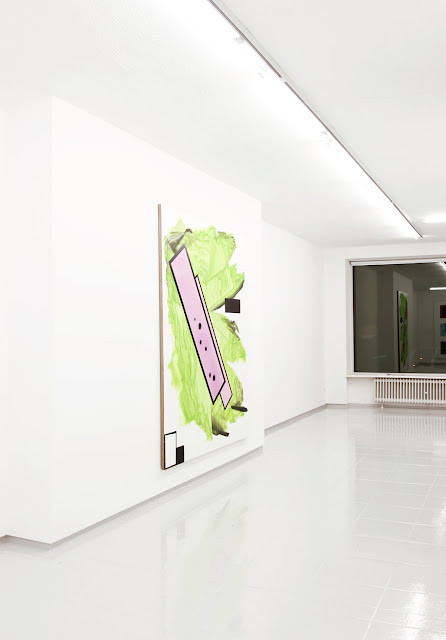 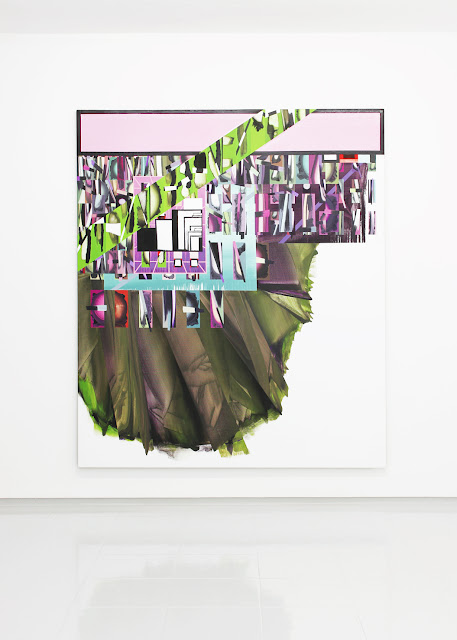 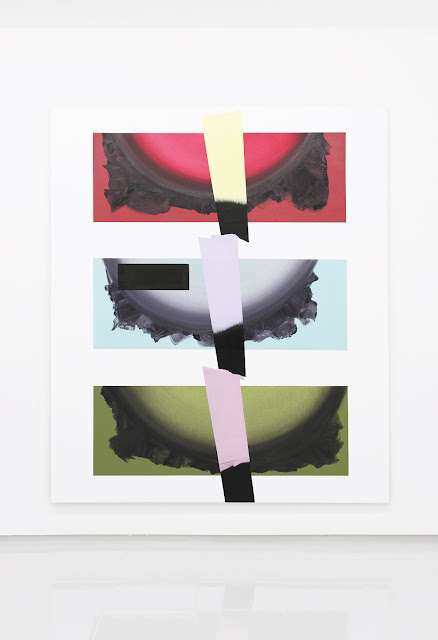 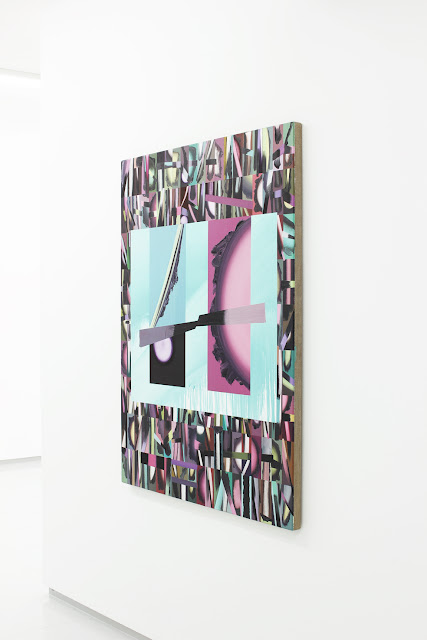 The problems of painting – colour, contrast, figure/ground, surface/line, texture, gesture, realism/abstraction – their presentation and reception are complex insofar as they are not solvable in the traditional sense. Each particular solution reconfigures the questions of the whole. The painter Klaus Merkel (b. 1953) has taken on this dispositive in his practice for over 30 years. His earliest exhibitions already positioned themselves again the auraticisation of individual paintings by means of unorthodox installations – images installed as clusters, blocks and series – while self-consciously addressing their character as a specific form of showing. These image installations culminated in his 1988 solo exhibition at the Kunstverein für die Rheinlande und Westfalen in Düsseldorf where he presented 25 large format paintings on a single wall of the otherwise empty exhibition space, transforming the paintings within this ‘hyper-frame’ into a single image. Influenced by an age of ongoing crisis in the artistic, economic and ideological spheres, what soon followed was a sharp rupture in his painting practice, a turn that would open up unexpected perspectives and potentials with regard to what can be negotiated in an image beyond the ‘Crisis of Representation’ (Ann Goldstein).

Klaus Merkel first presented his Katalogbilder (catalogue images) at Galerie Annette Gmeiner in Stuttgart in 1993. In a series of freestanding panels, Merkel presented a serial index of his entire, previous body of work, each image repainted at one tenth of the original scale. He thus managed not just to devalue the unique image with respect to its copy or its copyability per se but also to integrate the organisation, reception and circulation of images (and their copies) – a catalogue as a left over derivative of the ephemeral structure of the exhibition – into the images themselves, asserting this organisation, reception and circulation, so to speak, as his own right.

He subsequently created an index which provided him – as well as the recipient – with the foundation to ‘paint images with images,’ as he often says. By removing the loaded factor of artistic creation from the equation, he managed to produce a certain emptiness (not unlike On Kawara, Ad Reinhardt, Louise Lawler and others) through repetitions in various arrangements, series and formats and increasingly it is this very emptiness which allows one to focus on the constitutive meta-levels of artistic production and reception. Beyond the medium specificity and material dynamics of painting, he succeeds in aestheticizing the surrounding, constitutive contexts of art, thus making them directly experienceable and objects of negotiation.

Upon considering our era’s hyper-specific, accelerated circulation and consumption of installation views, Klaus Merkel’s investigations become more relevant than ever. Platforms like Tumblr or Instagram, alongside blogs, magazines and catalogs, are, at least quantitatively, becoming the primary form of reception and more and more images of art are being seen than ever before. But under which conditions and with which consequences?

In response, Merkel formulates the demand that each image must be able to stand alongside other images and contexts, i.e. somehow good. An image must always be more than just a reference in the ‘painted discourse,’ (Markus Brüderlin) through which a sophisticated system of recombinations, in which each individual element configures the coexistence of all, becomes possible. He thus uses every painterly register needed, not just to present the images agents but also to produce an inventory of his own craft. Flat surfaces against rough brush strokes, hard vs. bleeding edges, washes, wet in wet, much flatness but also pastose spots, transparencies and opacities. Thus the Salate (salads) series, started in 1995 with its spontaneous, expressive and non-reproducible gestures, became somewhat of a stabilising antagonist to the rigid structuredness of the Katalogbilder. The series became stabilising in the sense that the works provided and still provide a real foundation, potentially developing new surfaces and platforms for, stages so to speak for the Katalogbilder’s installations.

These movements within the painterly rhizome, shifts in its visual inventions, enable new perspectives and insights just as much as they confront us with new paradoxes and dilemmas. The works made for and presented within the framework of the exhibition hydra at Galerie Max Mayer, three large and one middle format image, are testimonies to just such shifts. All of the works on display address issues of modification and adjustment as well as the entanglement of diverse spatiotemporal layers. They are new investigations and postulations but not without the possibility of progression, not without the possibility of carrying the other within oneself and thus creating an awareness of the end of the end.
Finally!