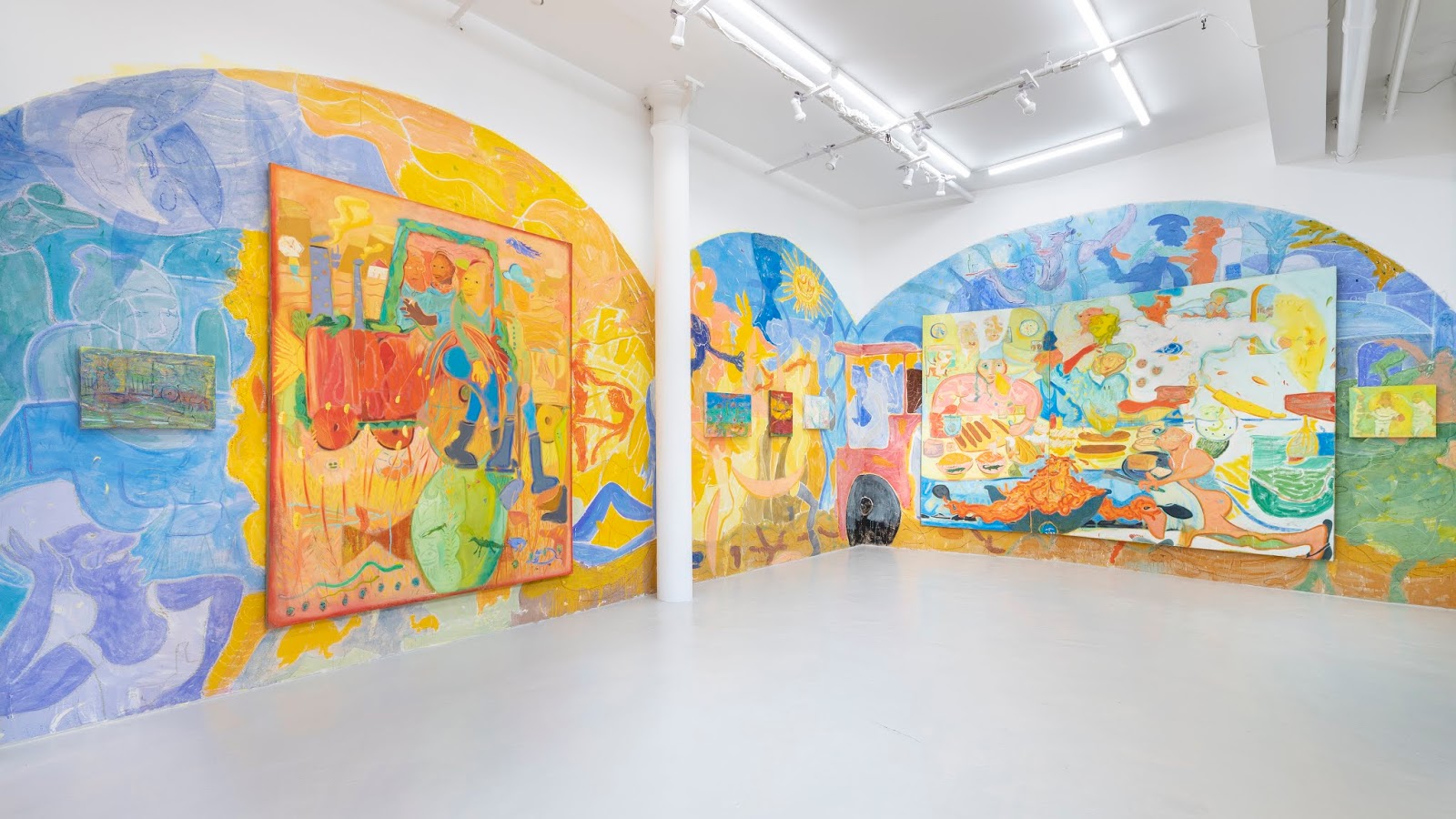 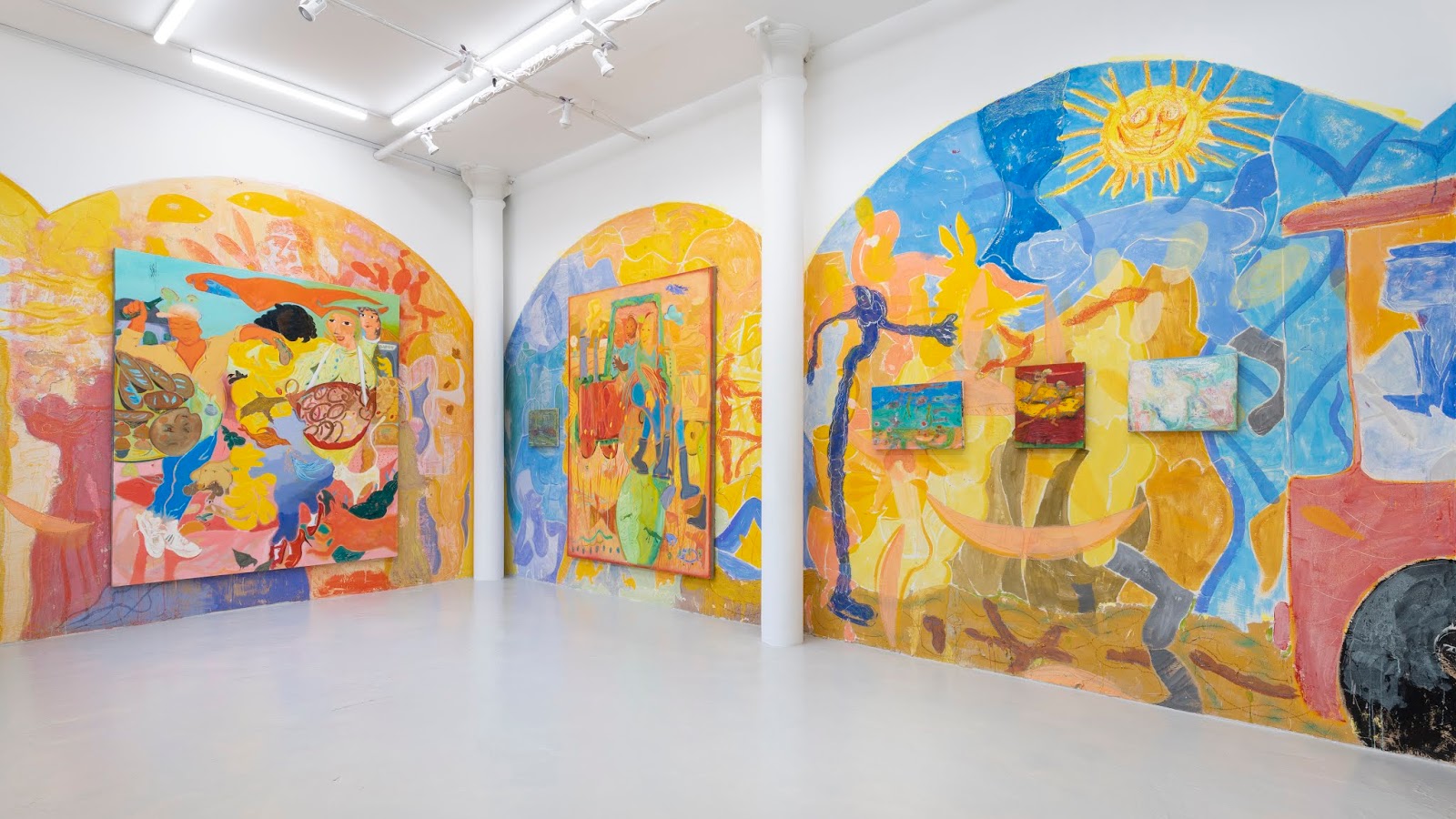 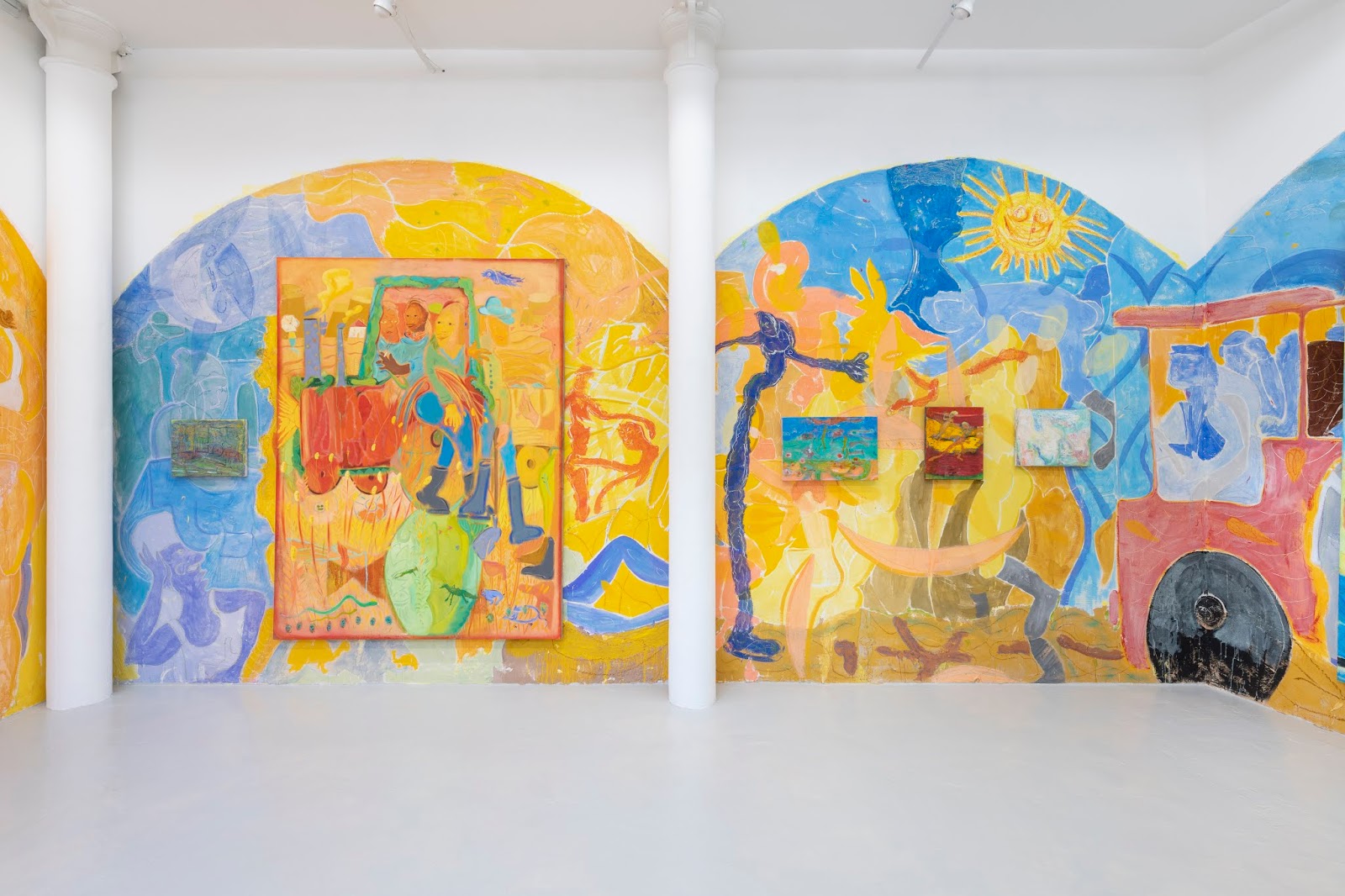 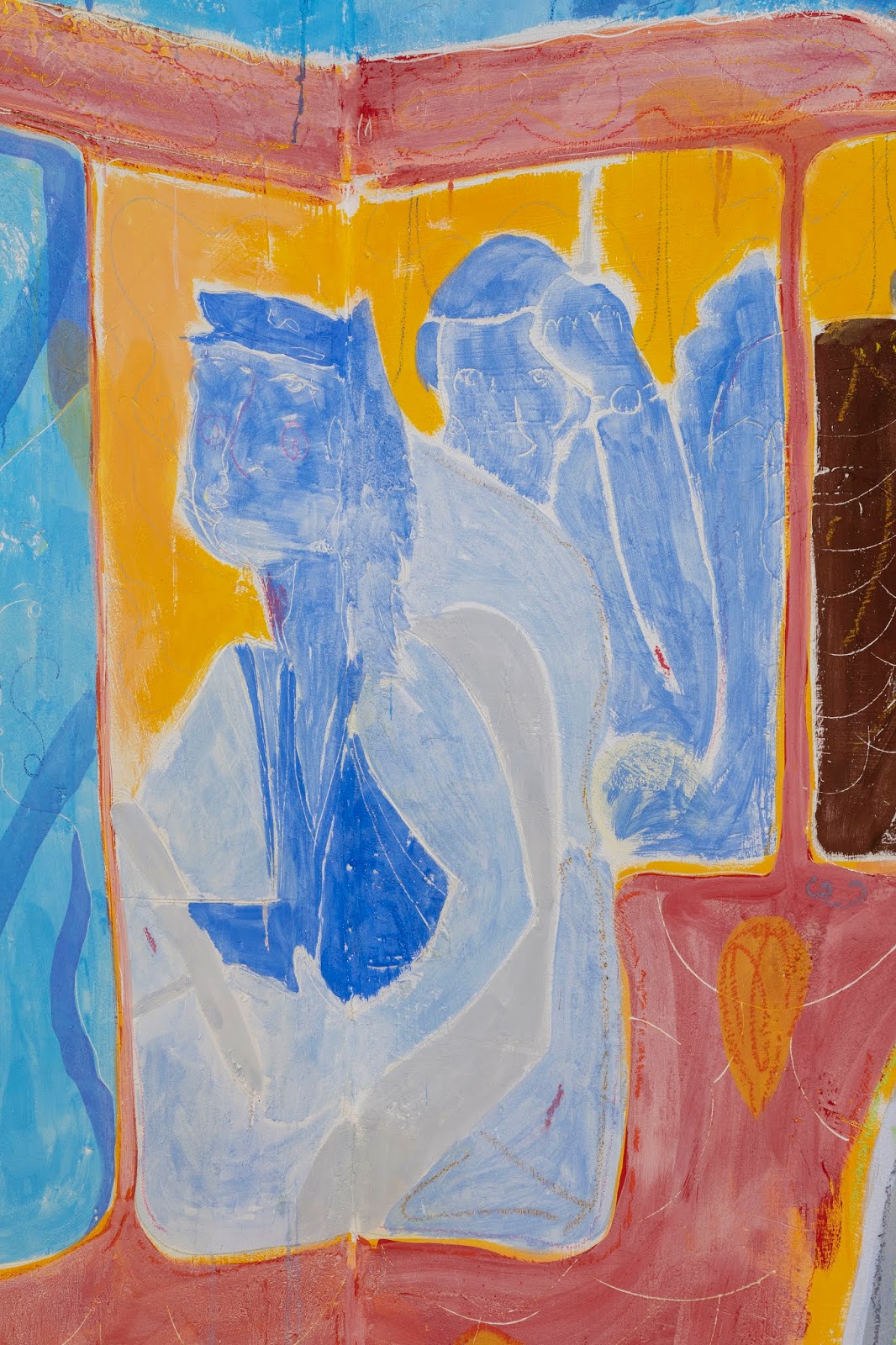 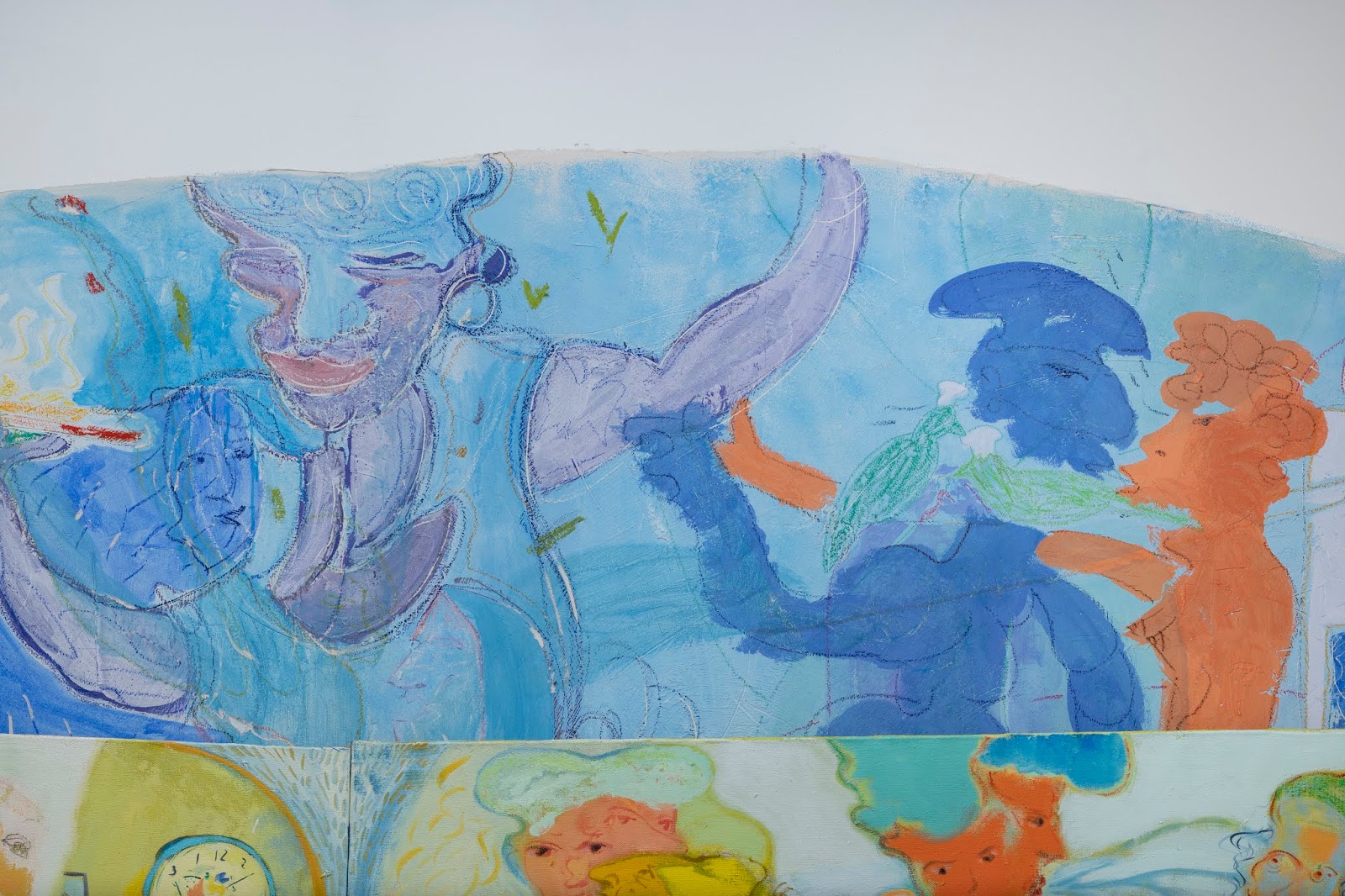 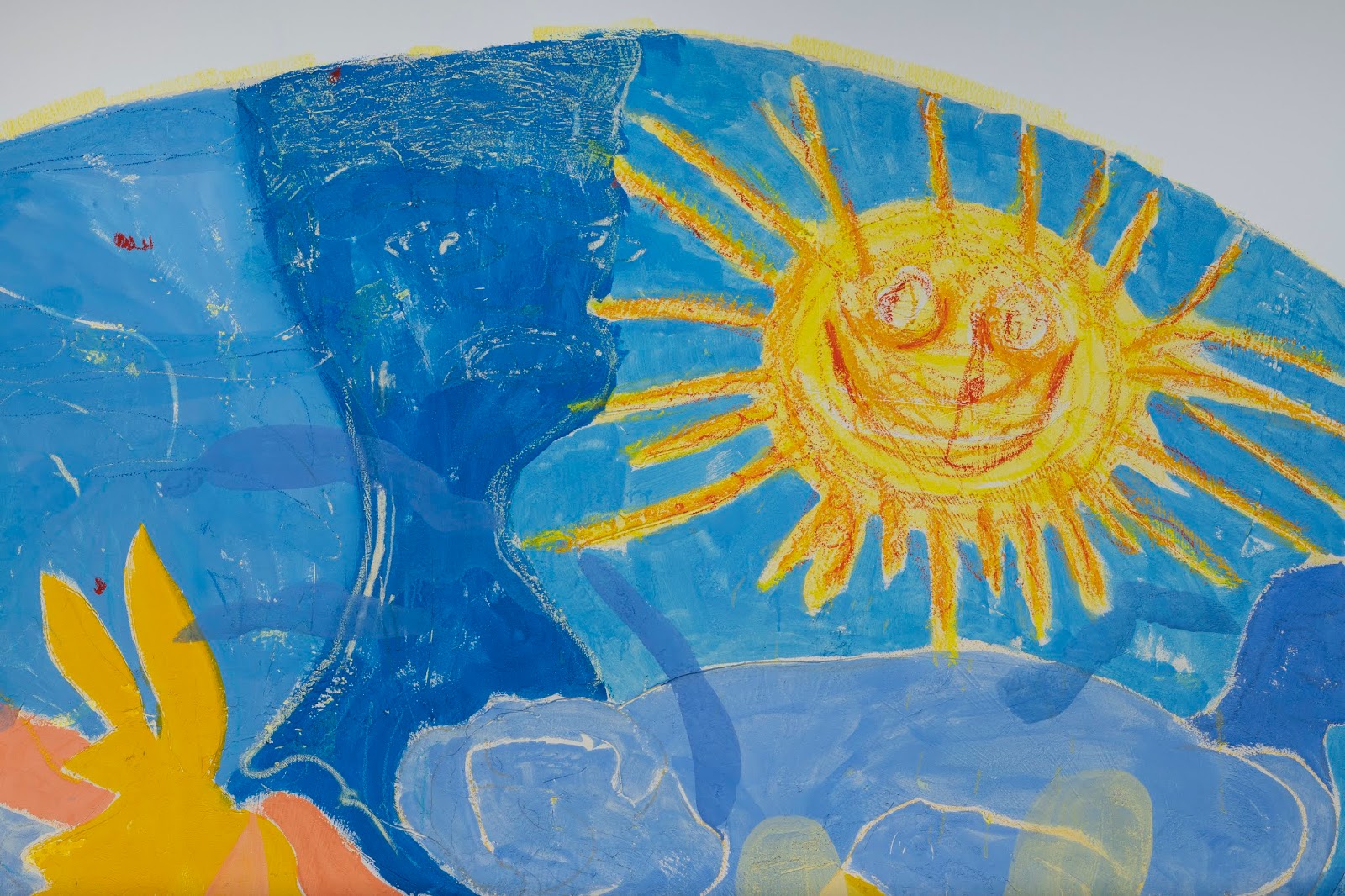 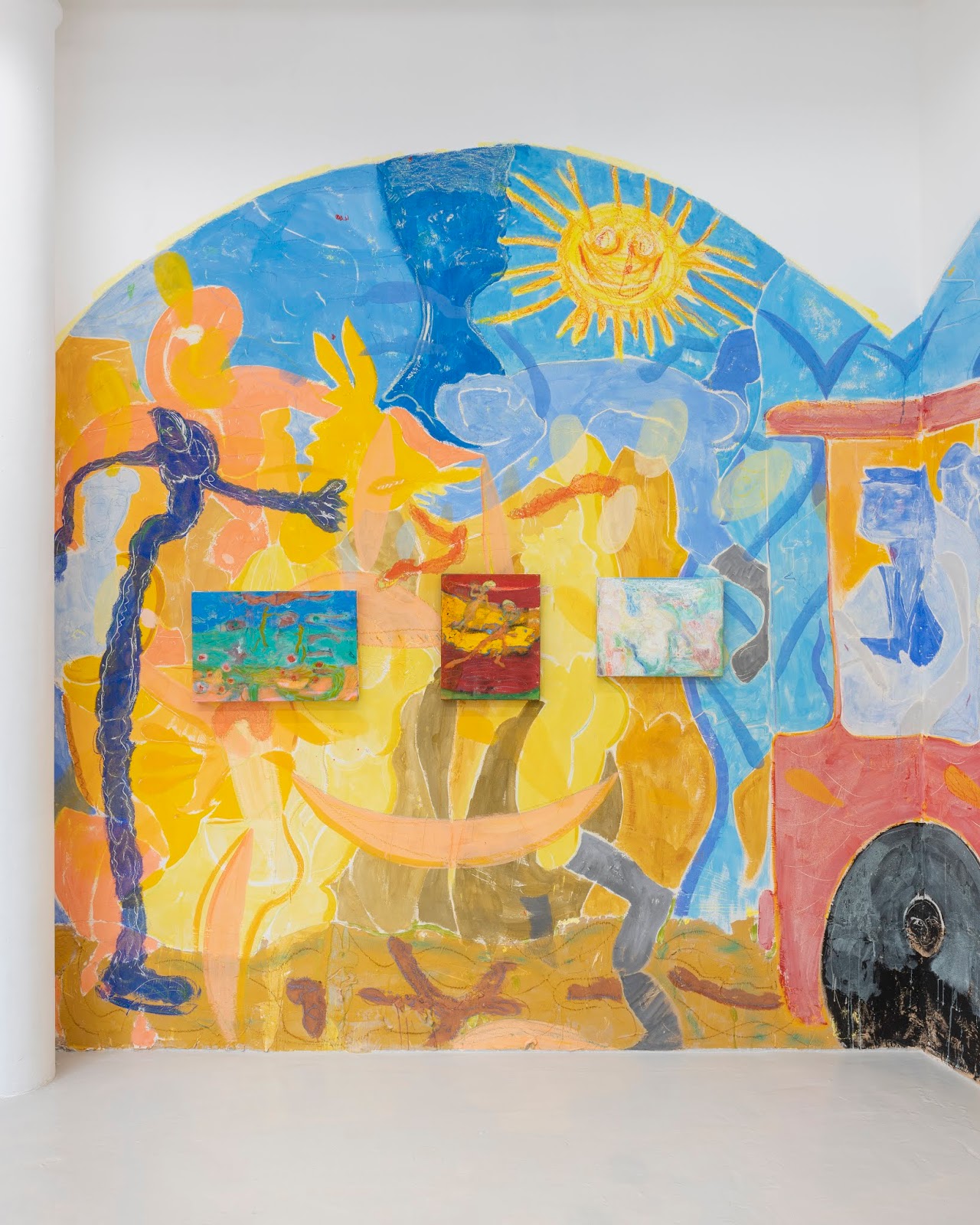 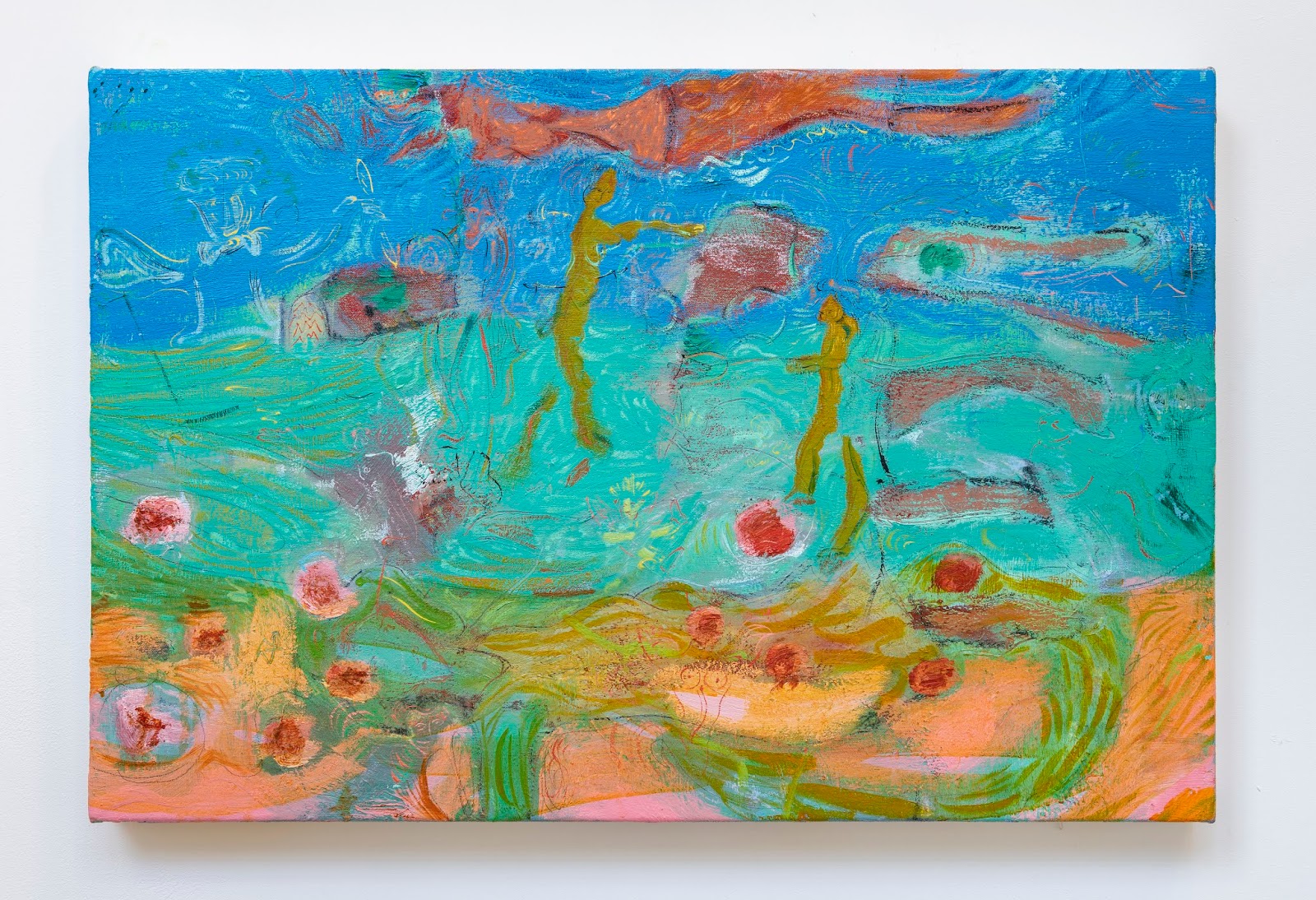 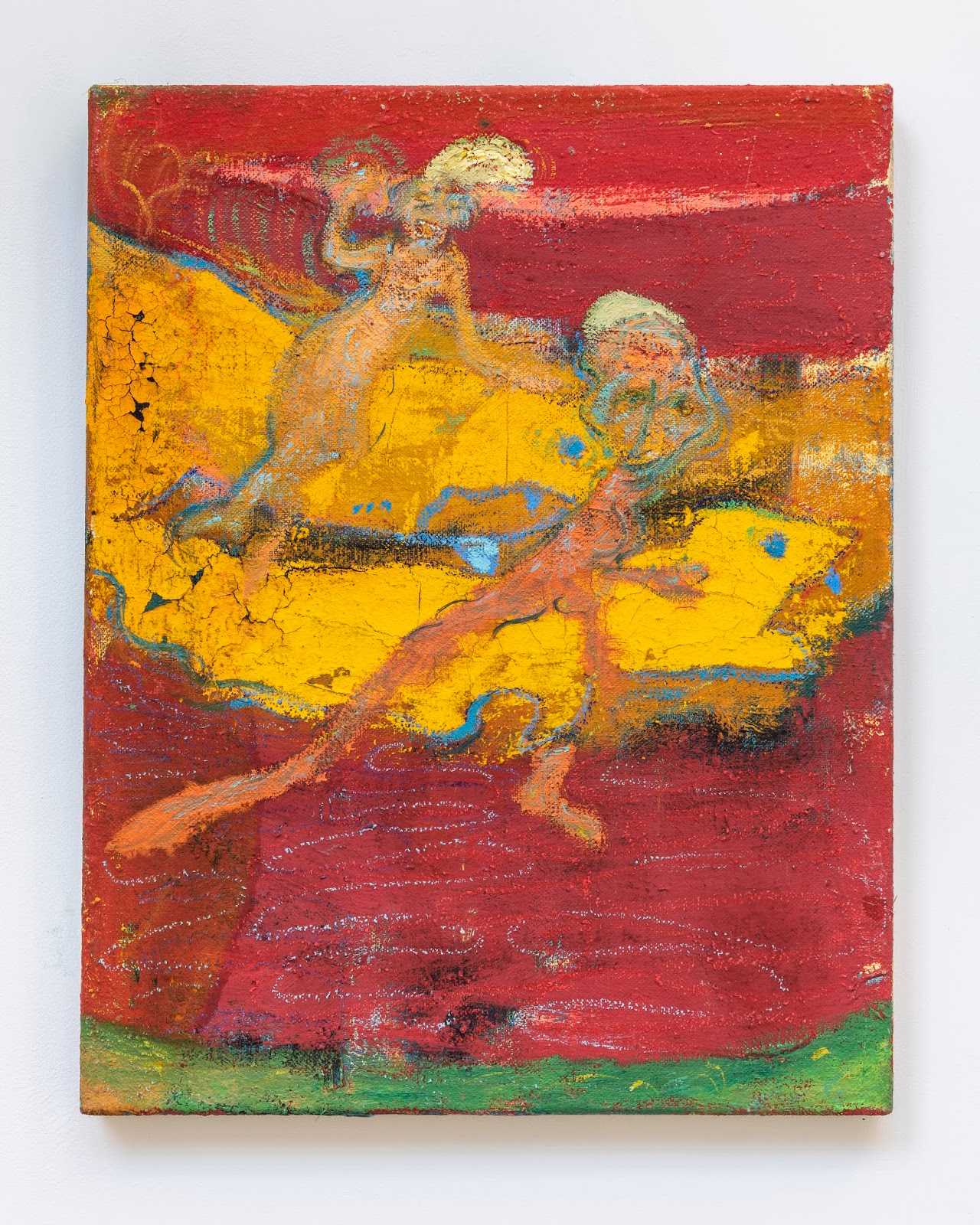 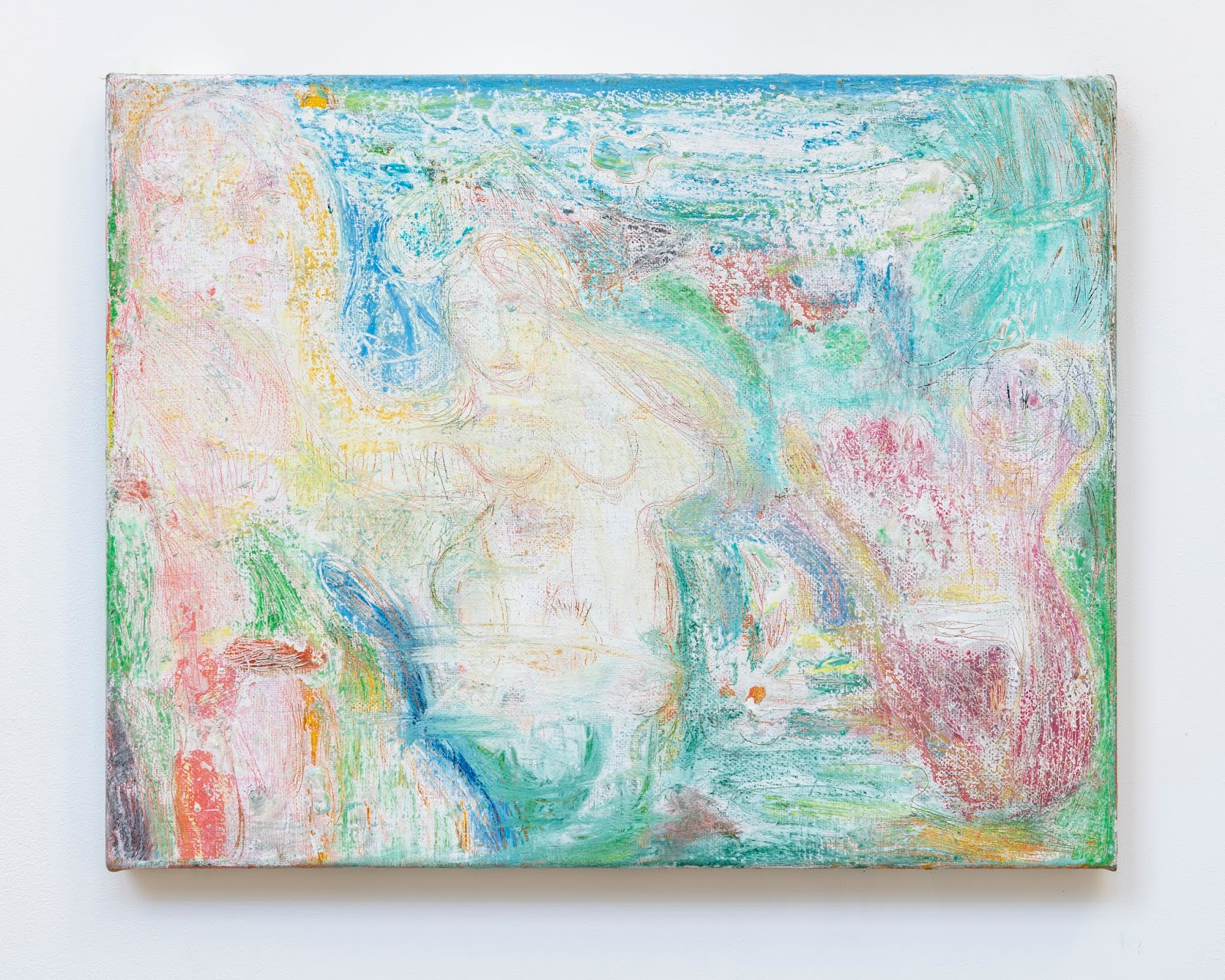 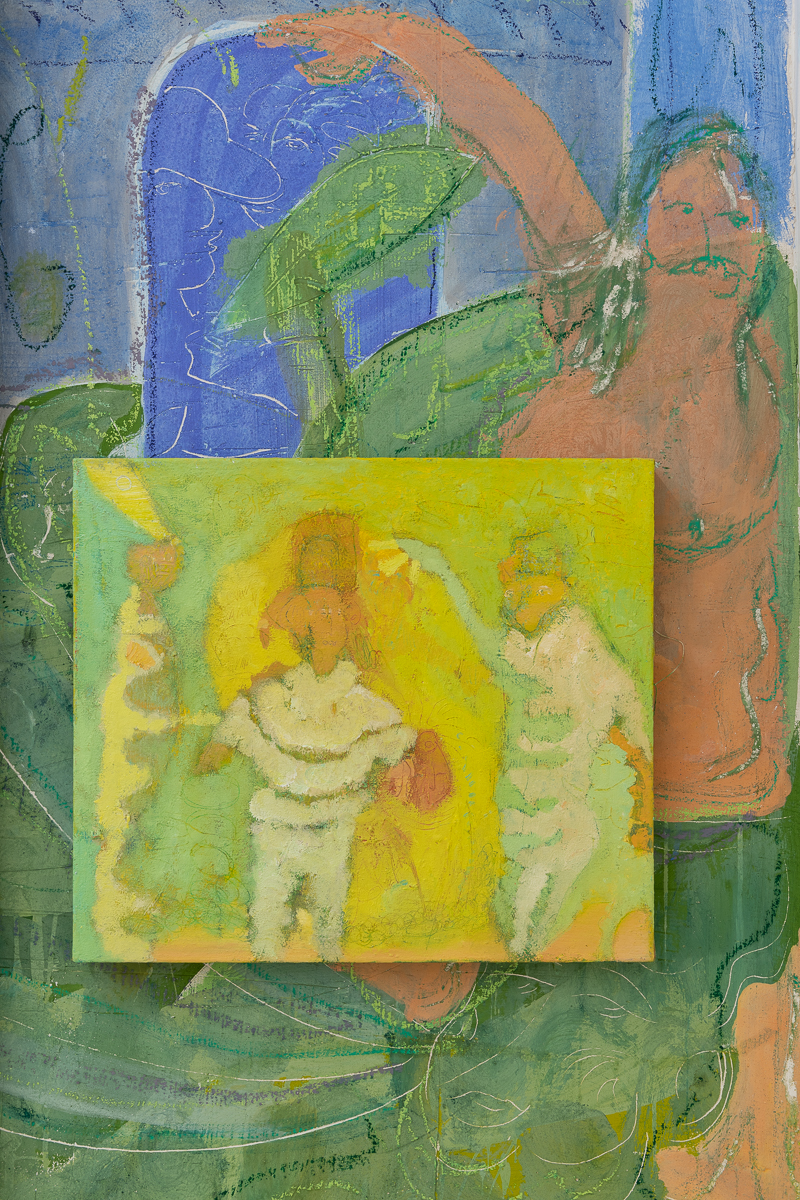 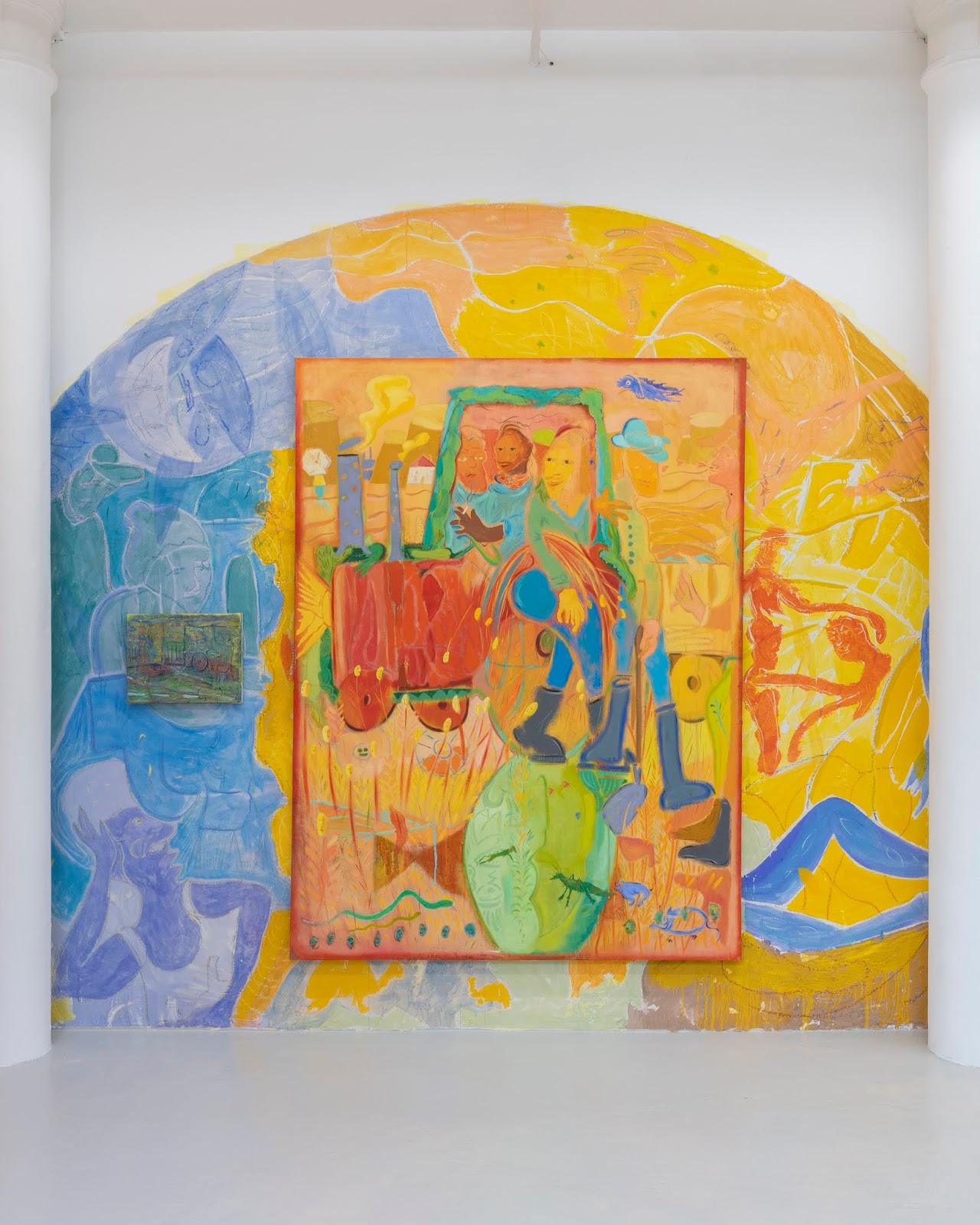 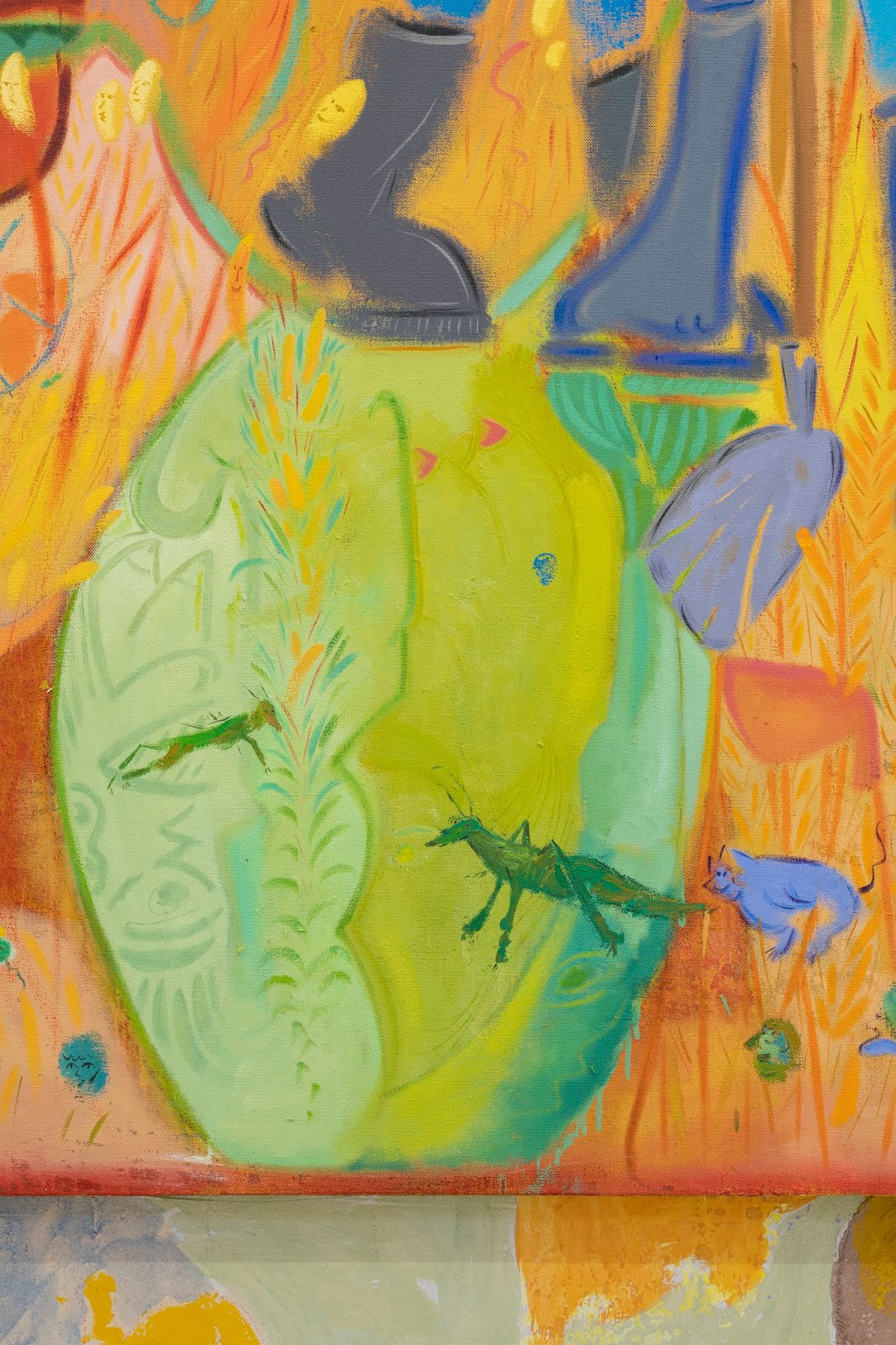 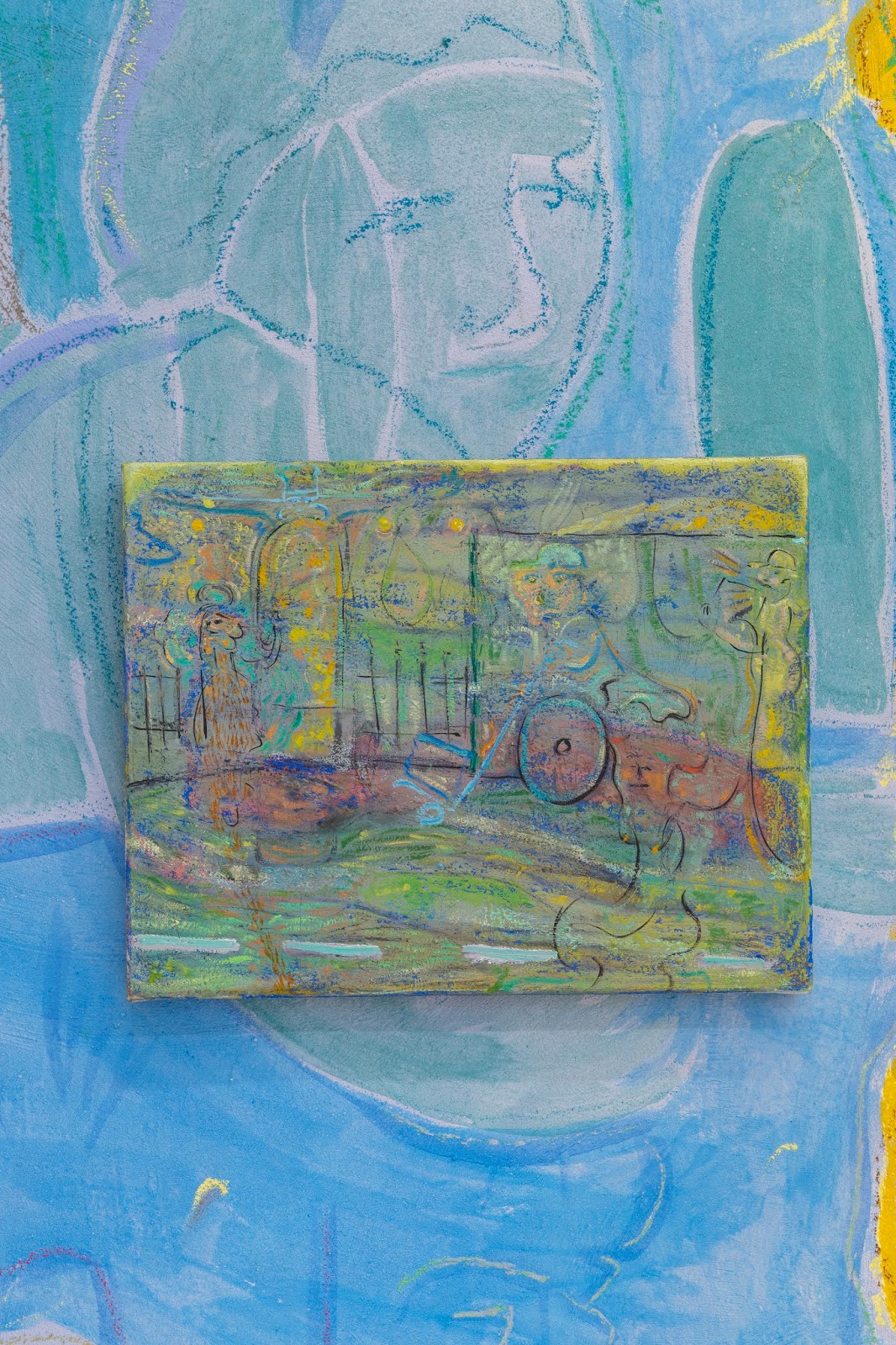 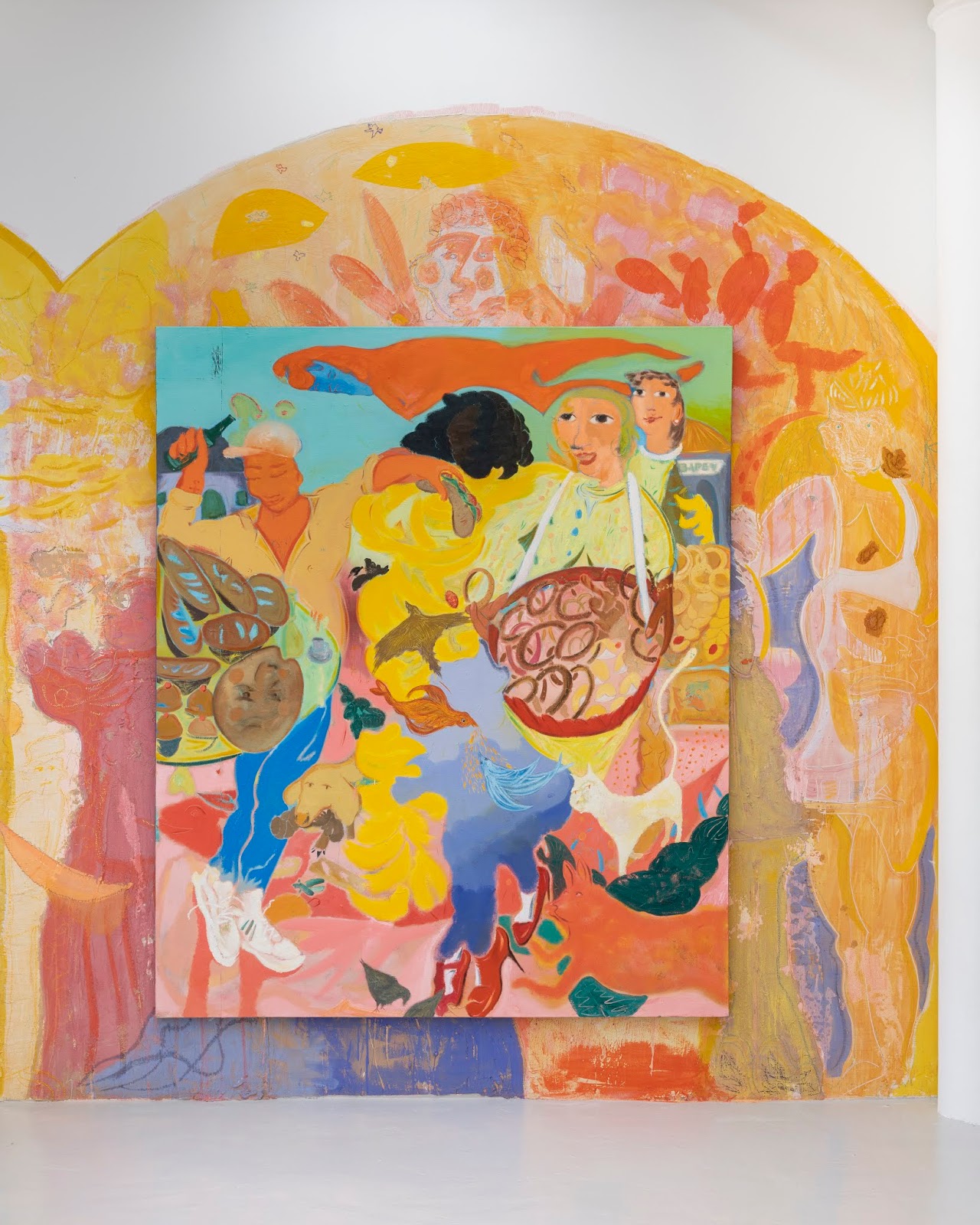 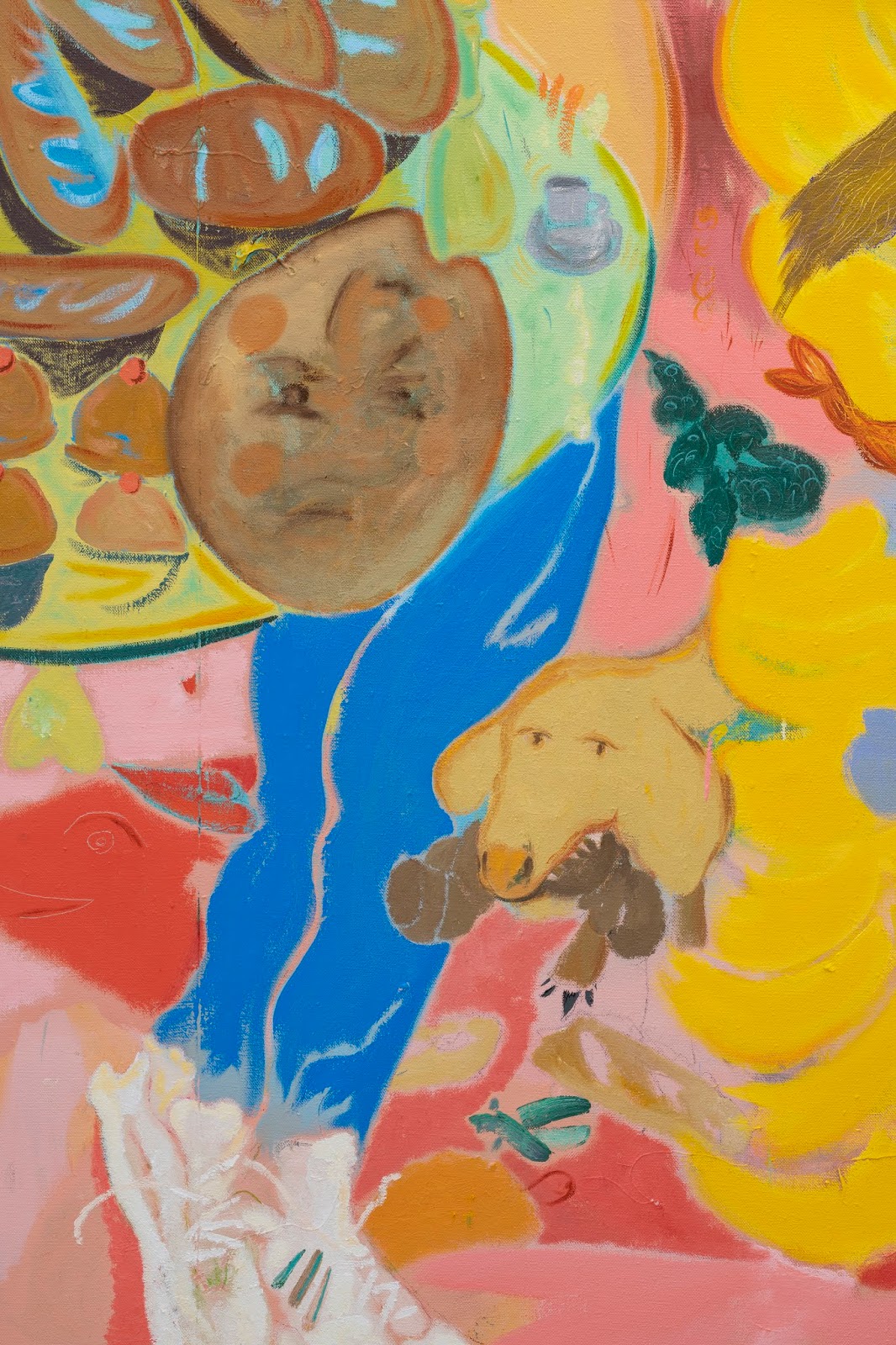 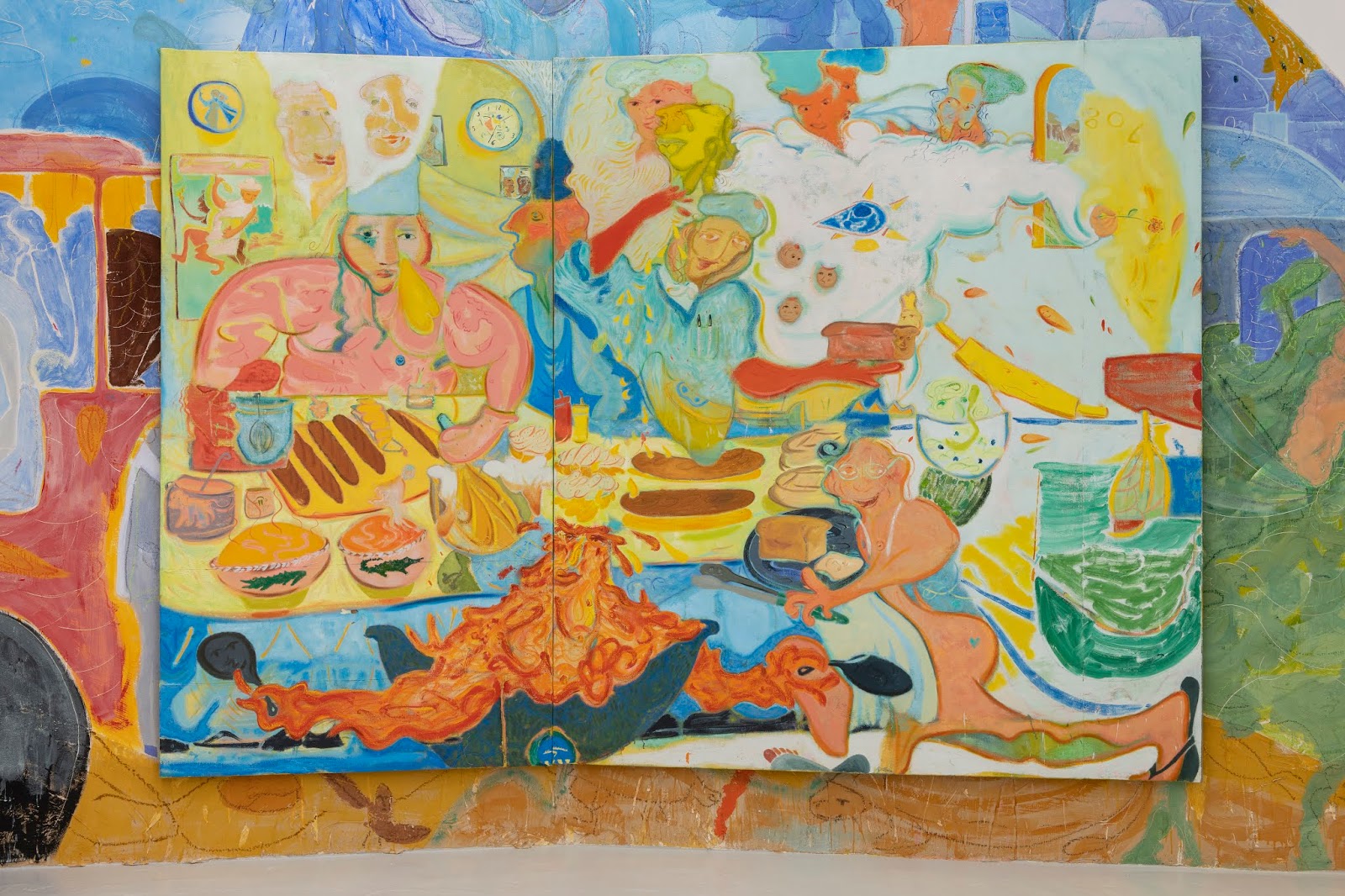 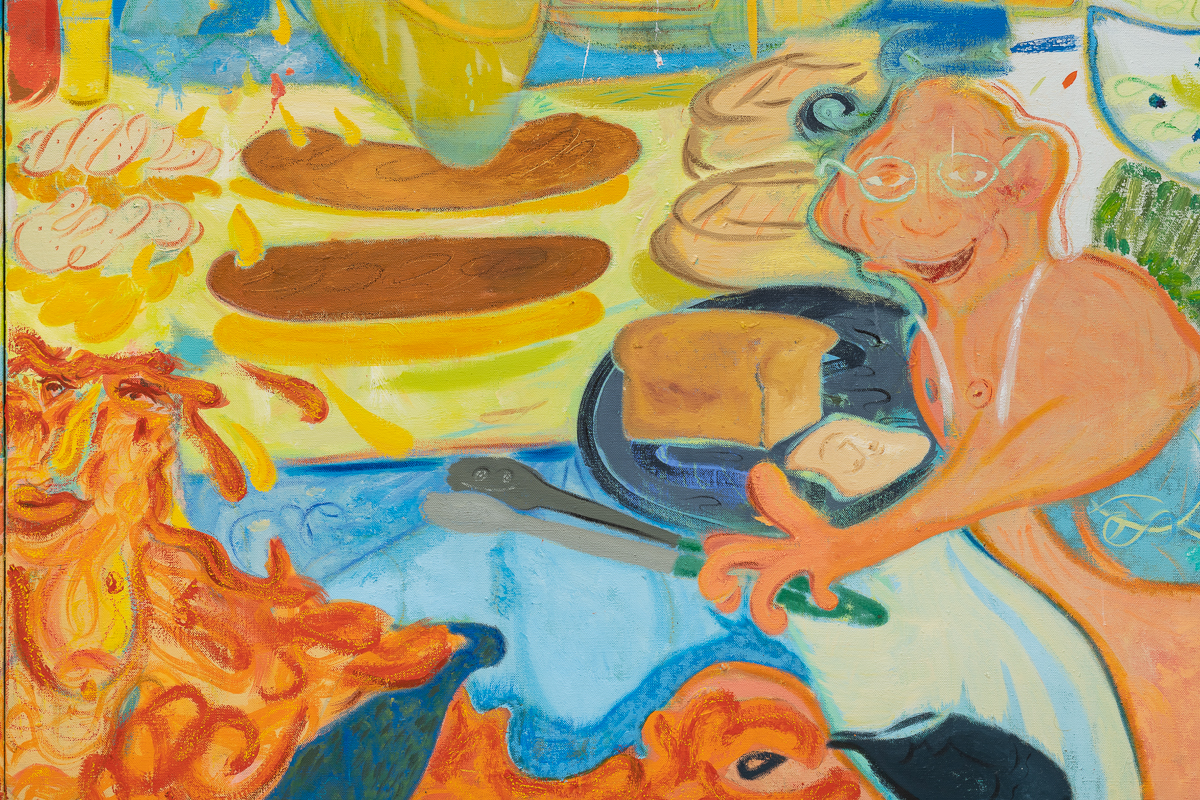 All images are courtesy the artist and Bosse & Baum.

Bosse & Baum is pleased to present Kneaded, an exhibition of new paintings and wall murals by the Greek artist Kostas Sklavenitis. This is the artist’s first exhibition with Bosse & Baum, and in London. In this body of work Sklavenitis investigates the social significance and symbolism of bread. The production, sale, and sharing of bread forms a key narrative and symbolic element, which results in highly emotive works that evoke comparisons with both prehistoric cave drawings and modernist abstraction, giving the paintings a sense of historicity and timelessness. The worlds that the artist creates are bright, filled with light and movement, with figures overlapping and conjoining, as their lives are impacted by the various processes key to the production of this essential component within worldwide cultures and societies.

In the series of three large paintings in the exhibition, Sklavenitis distills the essence of this into nostalgic motifs commenting on wider ideas around production, distribution and consumption. The painting entitled Yusurum Party depicts bread sellers at a bustling market, the word ‘Yusurum’ describes a gathering of Greek immigrants who came to Greece after the First World War in the 1920s; the work StudioKitchen is filled with the sound of chatter and the tinkling of coins at the bakery; the deafening roar of machinery as the wheat is gathered is captured by ByzanTan, where the colour palette reflects the warmth and simplicity of expression. Bread is in essence universalising, consumed as a staple food around the world, often with spiritual, secular and ritualistic significance. It can be cheap and simple, or be altered in a virtually infinite number of ways to suit any culture or occasion. It is also one of the world’s oldest foods, having been consumed and adapted over millennia from its humble beginnings more than ten thousand years ago. Bread is therefore a shared experience, which has taken on significance beyond nutrition, that eludes geographic or temporal limits.

Sklavenitis stimulates all five senses, providing a visual feast of colour and line, combining the importance of taste and smell, as well as conveying a deep sense of texture emphasised by the inclusion of sand and jesmonite in the wall murals. He uses frescos, paintings on walls and canvas, to create a Gesamtkunstwerk, a “total work of art”. The exhibition space, like the paintings, has no specific focal point, drawing the eye in equal measure across the breadth and depths of the paintings and walls. The flowing compositions and striking colours create an immersive environment and are an important continuation of his style of work to-date.

Kostas Sklavenitis’ painting practice explores a range of media, materials and surfaces. The artist explores scale through immersive wall murals, large paintings and smaller works which perform like peeping holes into the environments he paints. Often depicting scenes of everyday life, his inspiration is drawn from his own personal experience of growing up in Thessaloniki, Greece, and from working in a culturally diverse city like London. He is interested in the subjects of tradition, religion, and culture, from sources as diverse as folklore tales, gatherings at church or Sunday markets and craftsmen’s workshops. These themes, through which the artist explores cultural myths and narratives around life, love, death, and faith, are communicated through colourful and vivid compositions in his paintings.