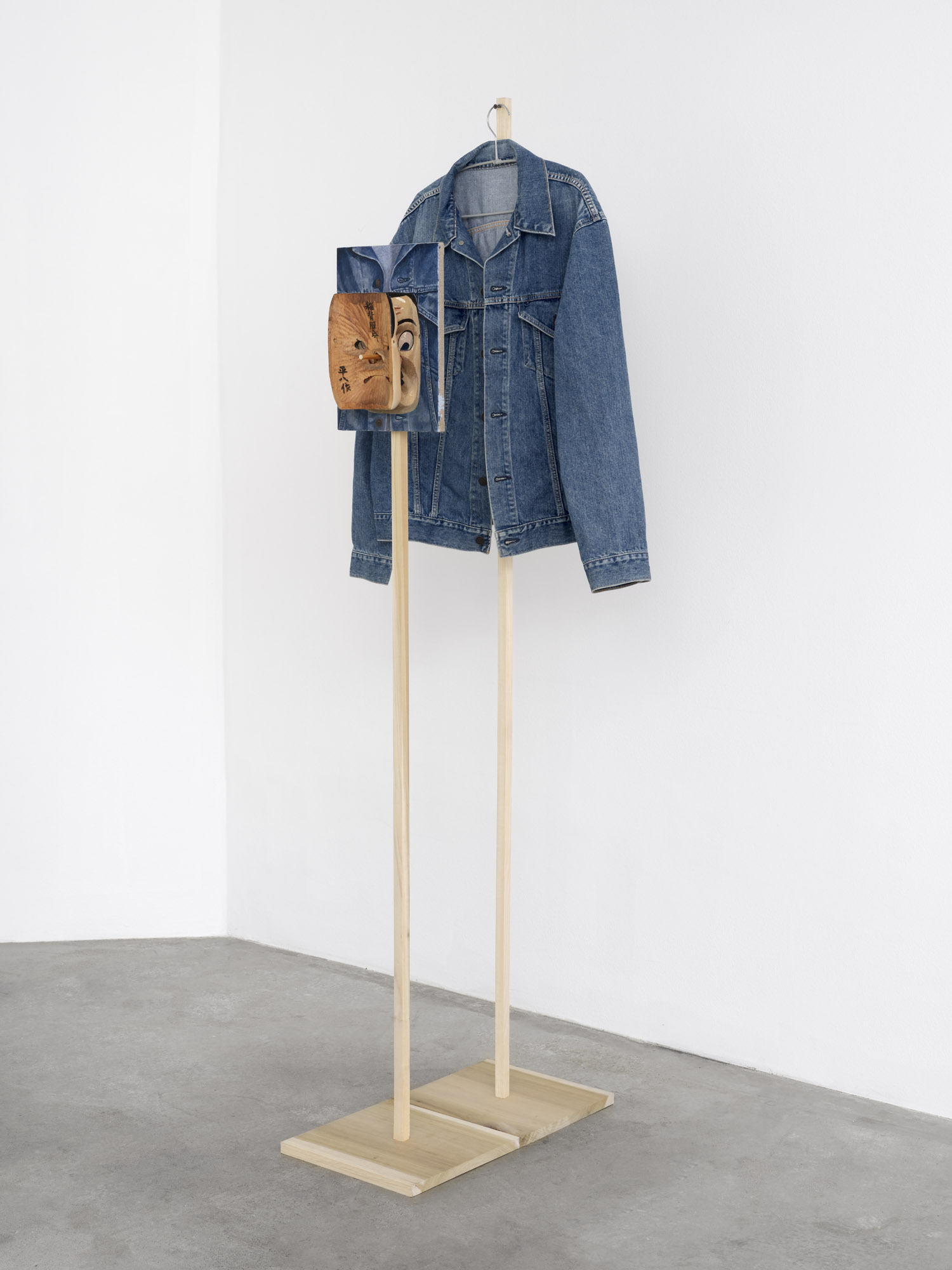 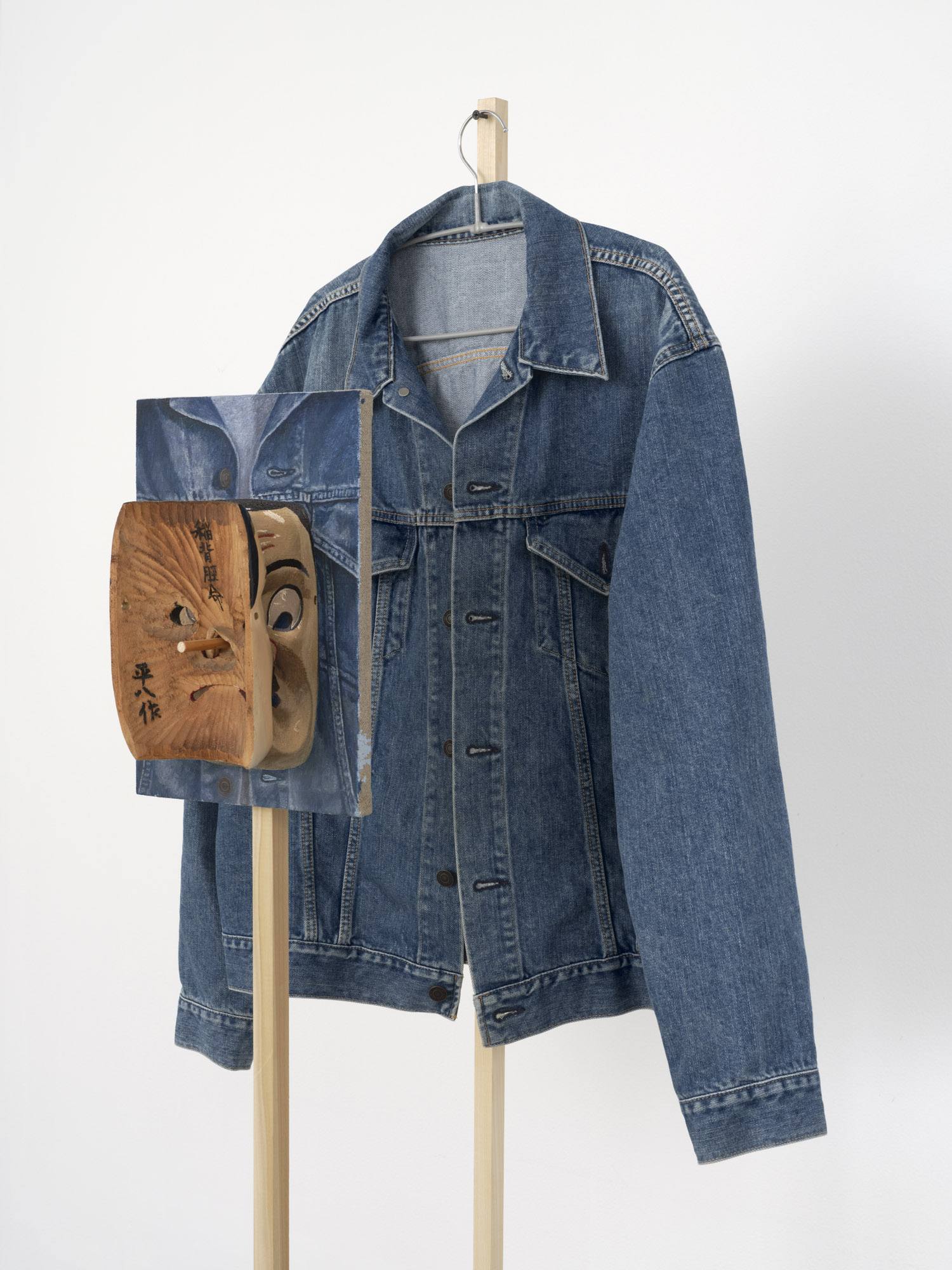 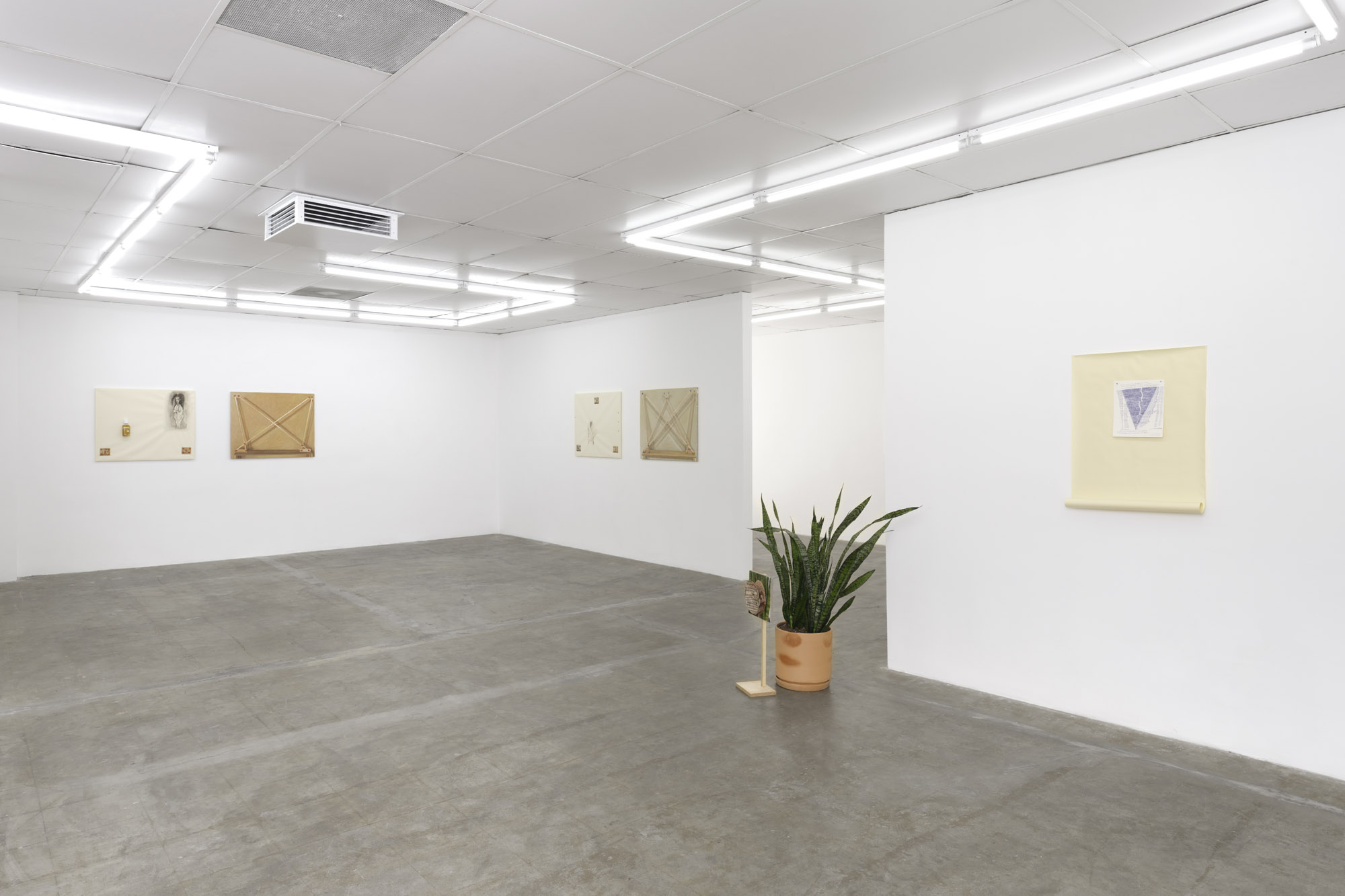 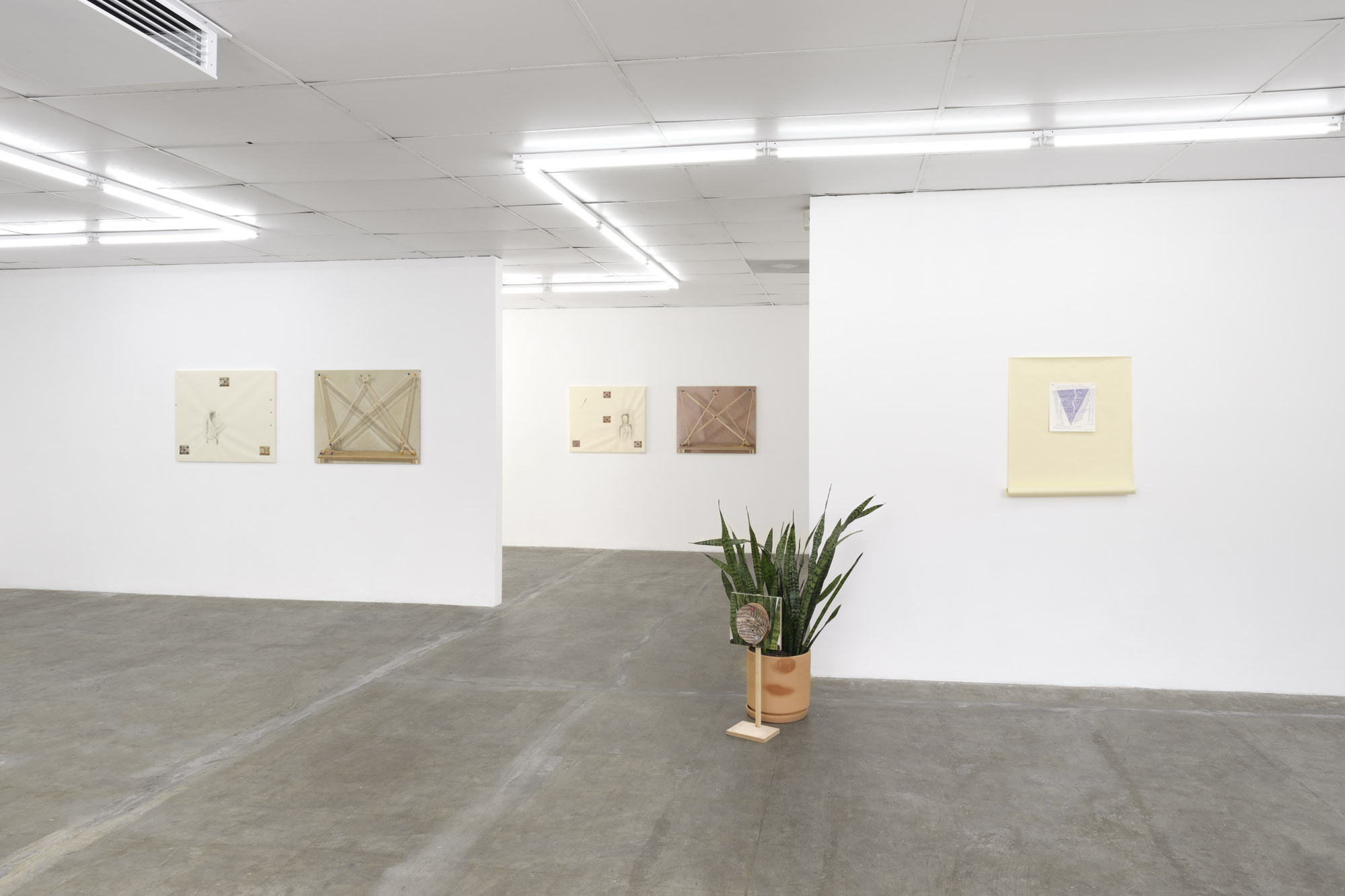 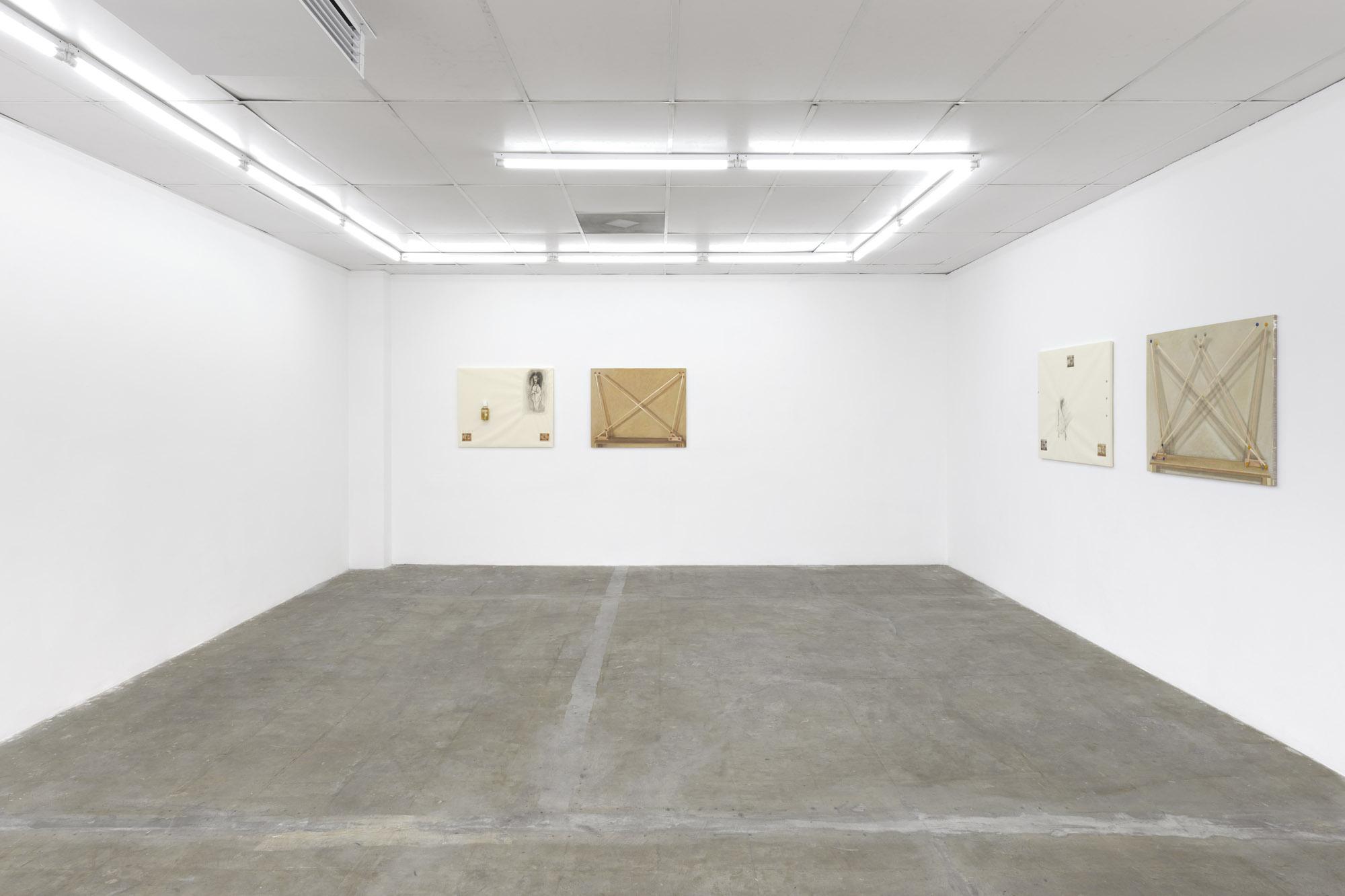 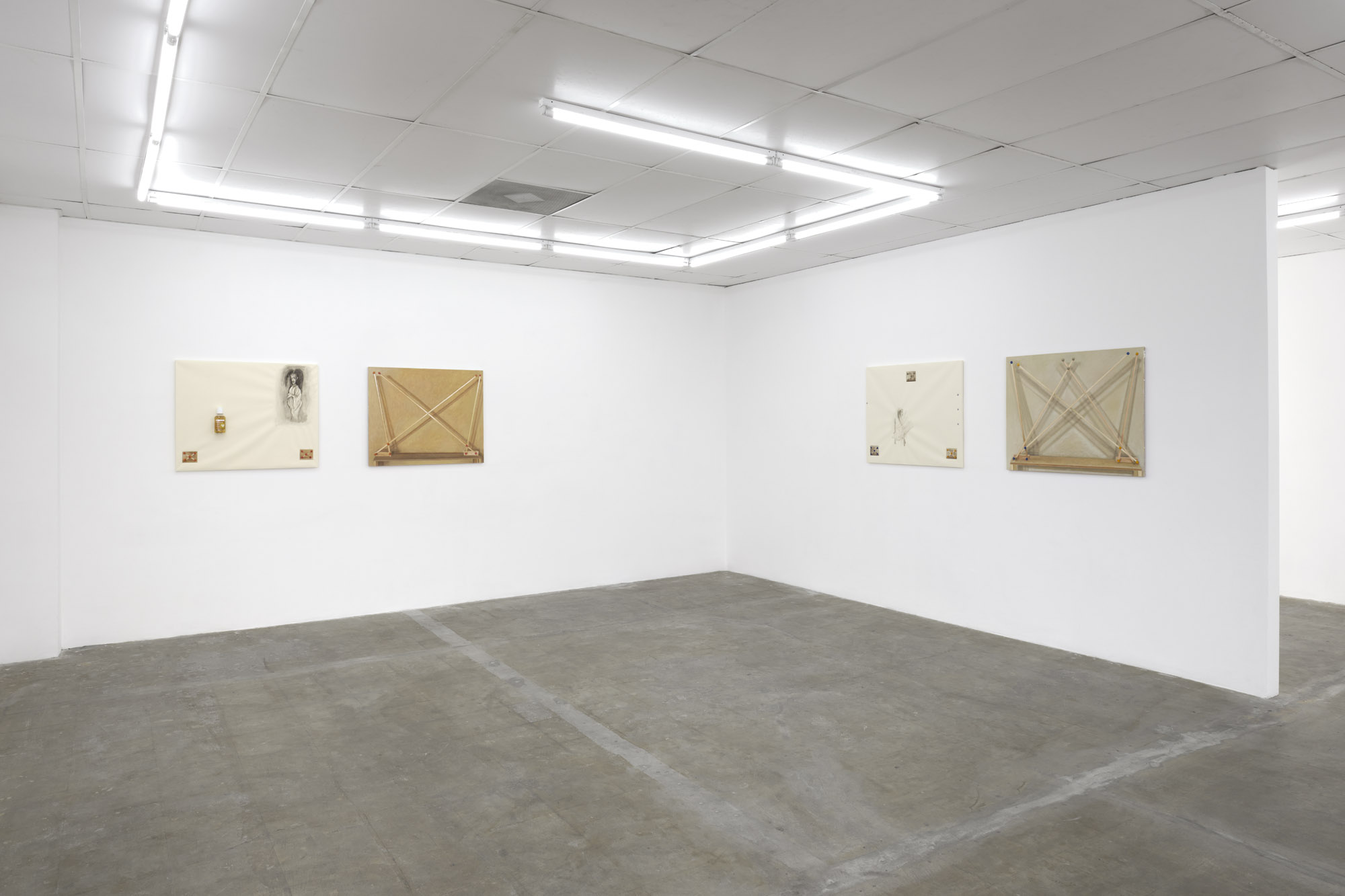 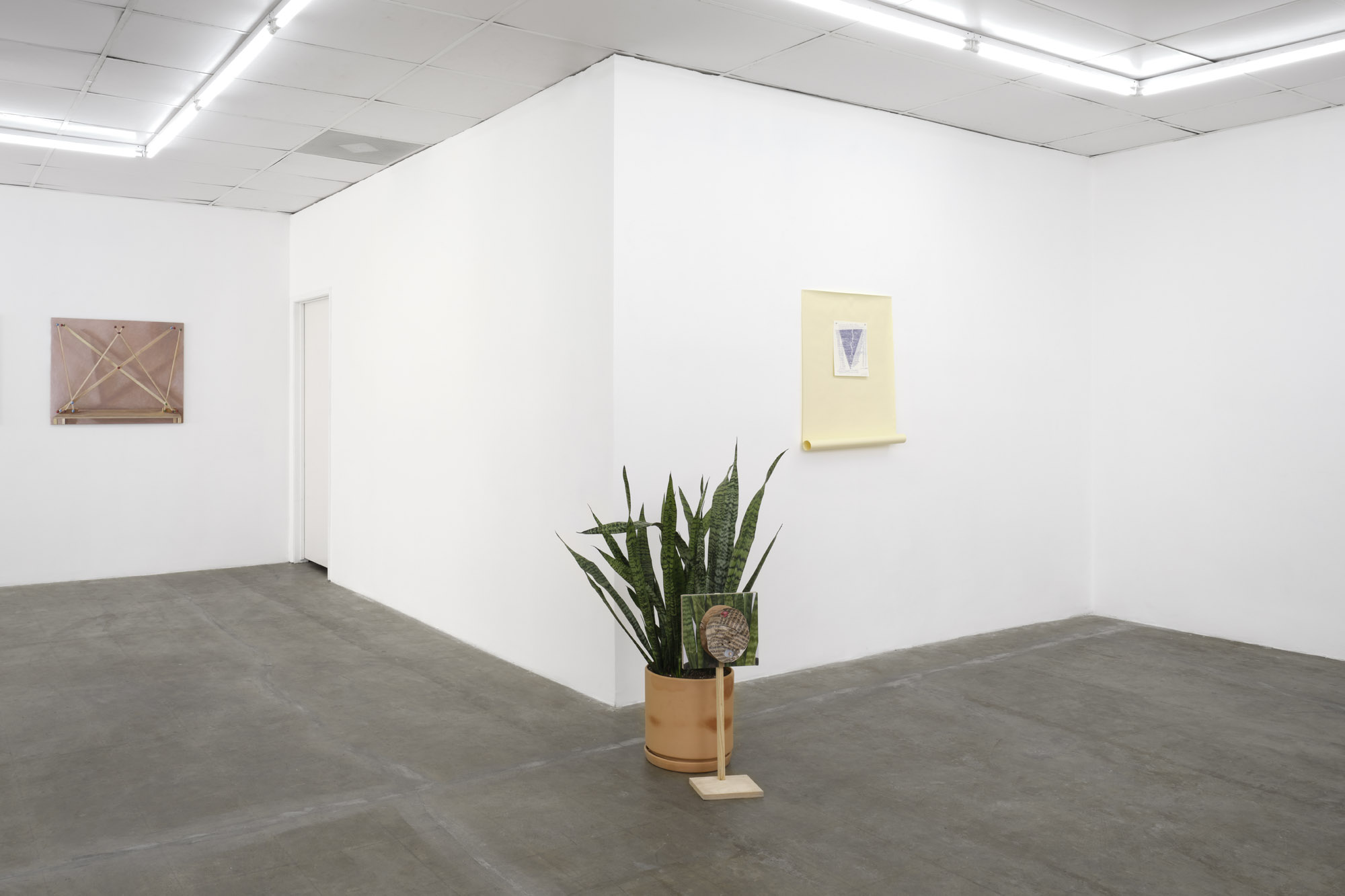 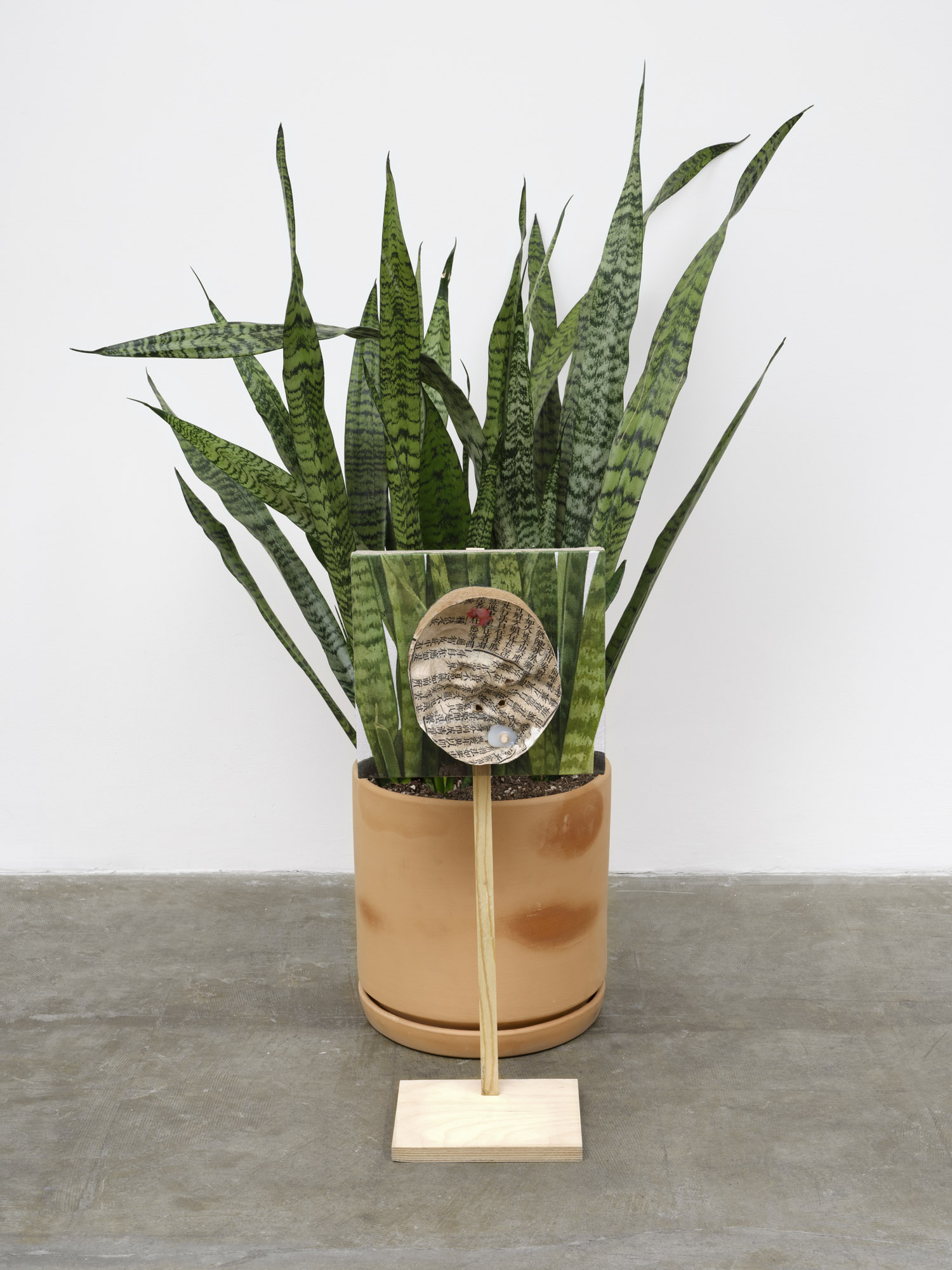 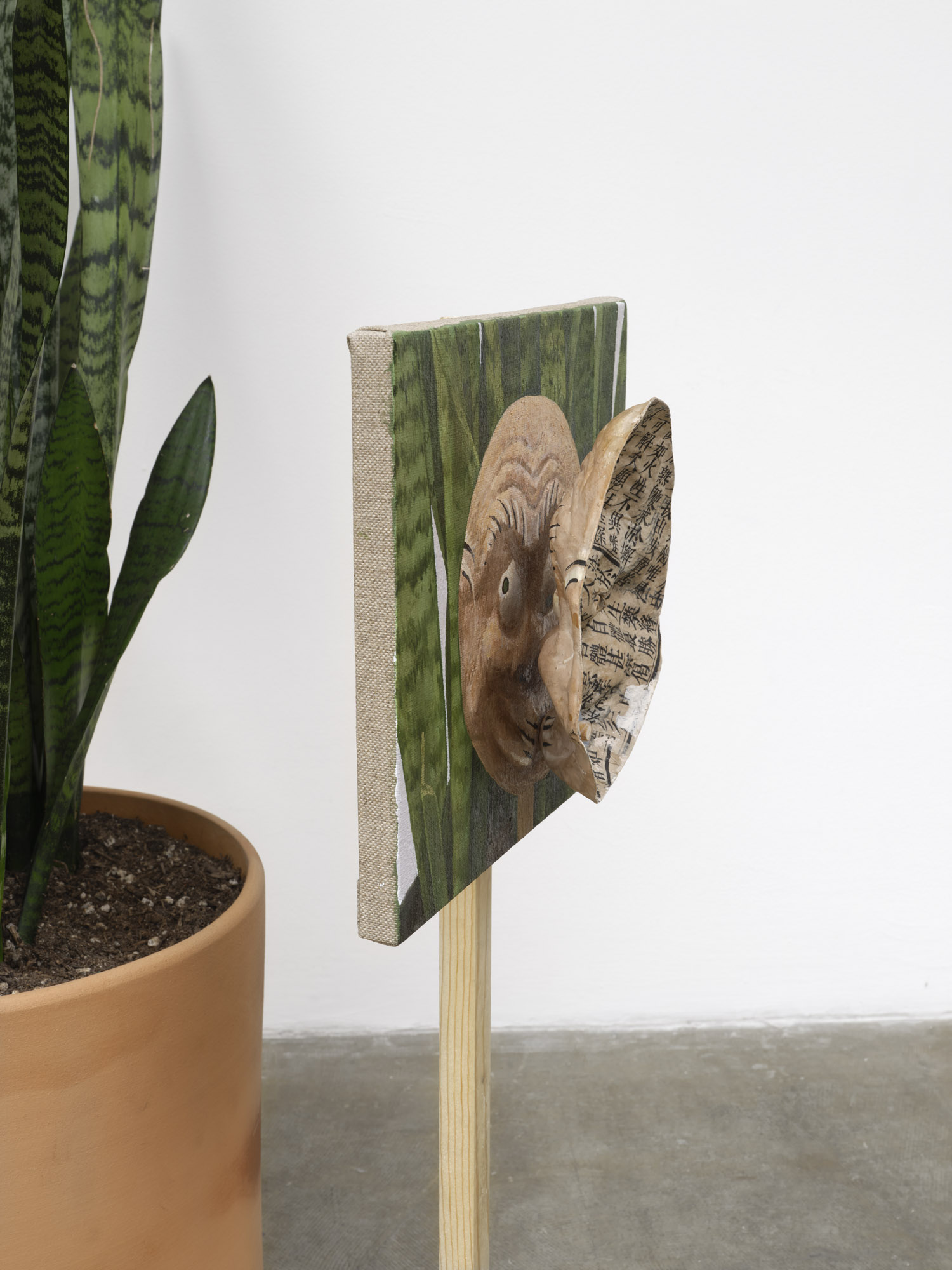 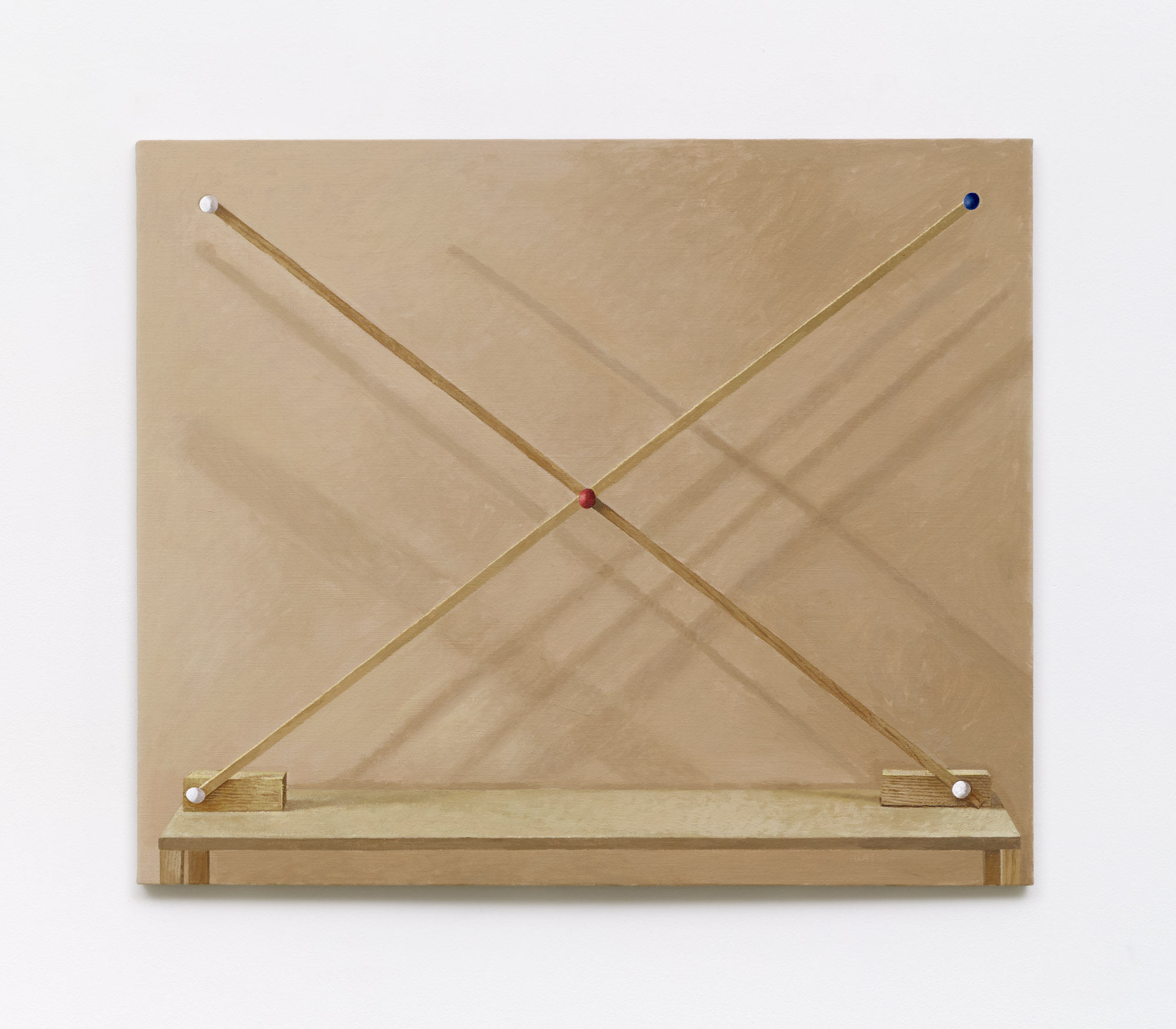 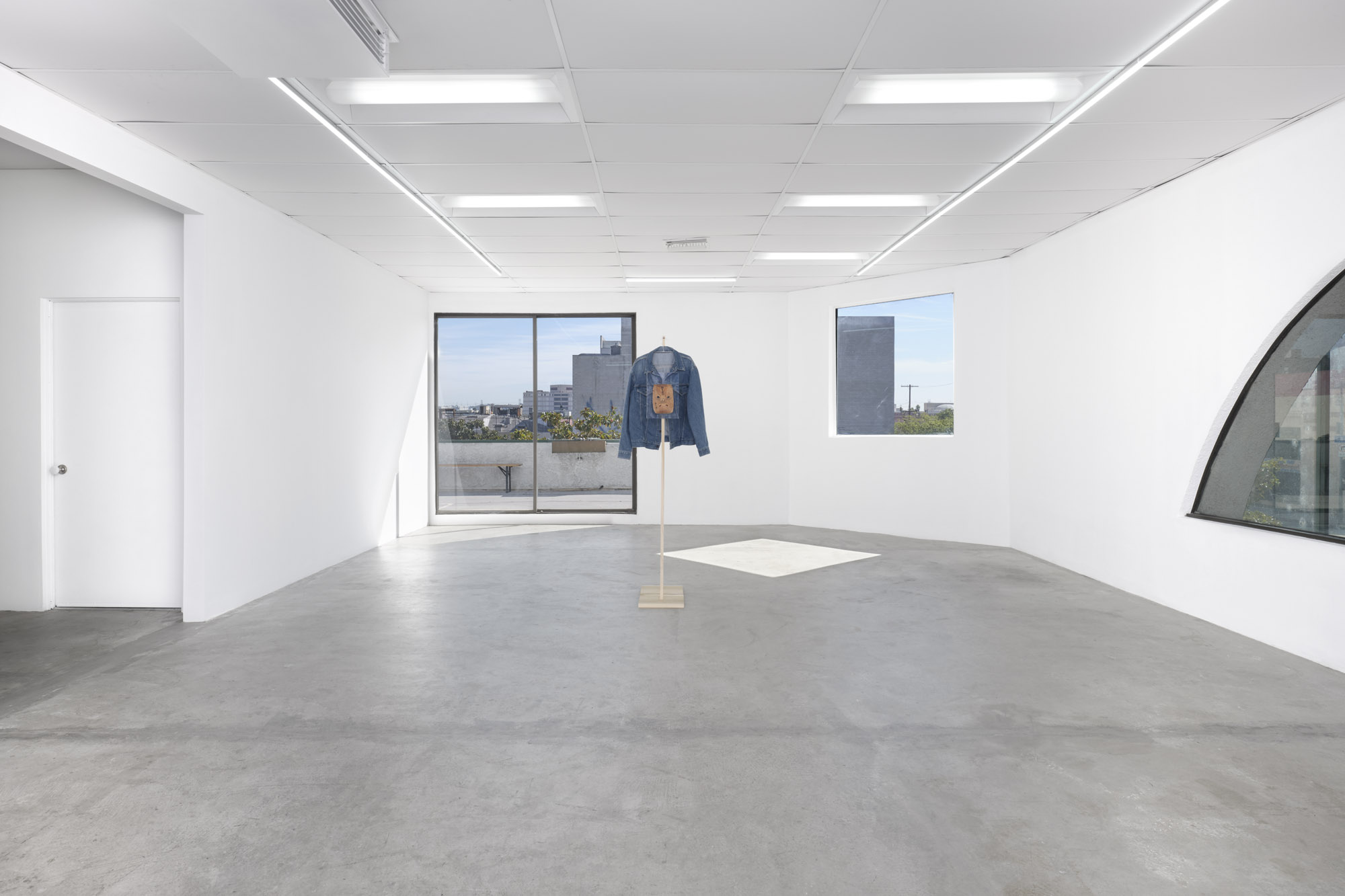 Photography: All images are courtesy of the artist and Bel Ami, Los Angeles.
Appearing talking about the object of regrets or obsession dancing leaving (resting in peace or just simply leaving) is masaya chibas first solo exhibition at bel ami, and in the united states. The title summarizes the narrative structure of noh stories, in which supernatural beings temporarily assume a human form. In his process, masaya chiba attempts to give physical shape to an intangible concept or memory. Constructing elegant sculptures from found objects, clay and wood, chiba observes how pulling a dream down to earth incurs a sense of loss. To record this complex feeling of grasping for pieces of something ethereal, chiba then makes still-life paintings and videos inspired by his sculptures. These two dimensional works return the sculptural experiments to the floating space of ideas. Masaya chibas philosophical musings and fine craftsmanship merge in a new series of diptych paintings with video components. One panel of each diptych is a still-life oil painting, paired with japanese paper folded over mdf. Within the paper panels, chiba embeds qr codes, smaller oil paintings on canvas, and ink drawings of edo-era spirits. In the exhibition, a haunting dissonance between objects and their representations becomes palpable, and it seems briefly possible that we are moving among ghosts. The diptychs in the show are all entitled like multiple objects intersecting as they grow / drawings with ghosts, qr code, sound, time, and present recurring motifs, which chiba explains: the sculptures depicted on the small canvases comprise five balls attached to a cross construction, representing the basic structure of matter: it may represent an atom or a whole stellar system; or it may represent a small community, such as a family, or a larger one, such as a nation or a civilization. The color combinations of the balls are sourced from paintings by giorgio morandi and steven aalders, and adidas sneakers. I begin my process by reproducing abstract ideas and thought models as gravity-based objects and then looking at them. Observing these abstract thoughts clumsily recreated in actual gravitational space, i find many pathetic details that make me say, this is not how its supposed to be. And, outside this still-life painters field of vision, a dizzying array of events, both depressing and comical, unfold with no respite. This is my attempt to show the limits of translation as still-life paintings: the kind of works that capture a layered perception, thats what im after. The ghosts [painted in ink on paper] are reproductions of drawings mainly from the edo period. In quoting them, i interpret them as traces of the edo-era painters sympathizing withor perhaps amused bythe bitter resentment of unfair and untimely deaths. Reading quentin meillassouxs essay spectral dilemma prompted me to draw these ghosts. The paintings extend their two-dimensional surfaces by linking videos and sound as qr codes: the video sage (2021), quotes from shinigami (the grim reaper), the rakugo story. Rakugo is a traditional japanese form of comedy, where the performer sits down to deliver a one-man show. Sage [which in japanese means lowering] indicates the bowing of the head at the end of the story-telling. In the shinigami story, a man makes a deal with the devil to successfully make a fortune, only to be killed by the devil when he greedily cheats him. I see this protagonist as a neoliberal businessman. In the video, the weight of my pissing from atop a tree causes the object to lower its head, bringing the story to an end. Another video is footage of my beloved partner dancing and goofing around. Such joyful moments should also be embedded in my still-life paintings. The sound was recorded on a winter day in 2020, when at dawn my cat started telling me something. The exhibition also includes a sculpture, hyottoko (old-timey comedian) (2022), composed of a mask and its painted reflection resting on the edge of a potted plant. Chiba says: the mask painting functions like a device to generate a place where two things [or worlds] are brought to the very edge of each other. Masks symbolize characters that have their own meaning within their worlds, while allowing anyone to insert themselves into them. And those who take on these characters put aside their social roles and feel their very souls. Masaya chiba (b. 1980, kanagawa, japan) lives and works in kanagawa. Selected exhibitions include masaya chiba exhibition, tokyo opera city art gallery, tokyo (2021); painting and ... , gallery m, tokyo (2018); perry rhodan and my life, art center ongoing, tokyo (2018); mam collection 006: materials and boundar-ieshandiwirman saputra + chiba masaya, mori art museum, tokyo (2017); what to do with memories by utilizing things such as indirect lighting in light box style, yatsuzaki halo, feeling of wanting to kiss, family story, sagamihara stone burger, forget medusa, and element 50m ahead, shugoarts, tokyo (2017); discordant harmony, hiroshima city museum of contemporary art, hiroshima (2015) (traveled to seoul and taipei); and roppongi crossing 2013: out of doubt, mori art museum, tokyo (2013). He is a teacher of painting at tama art university, tokyo.
Tags Bel Ami, Los Angeles, Masaya Chiba
Newer Post Older Post Home