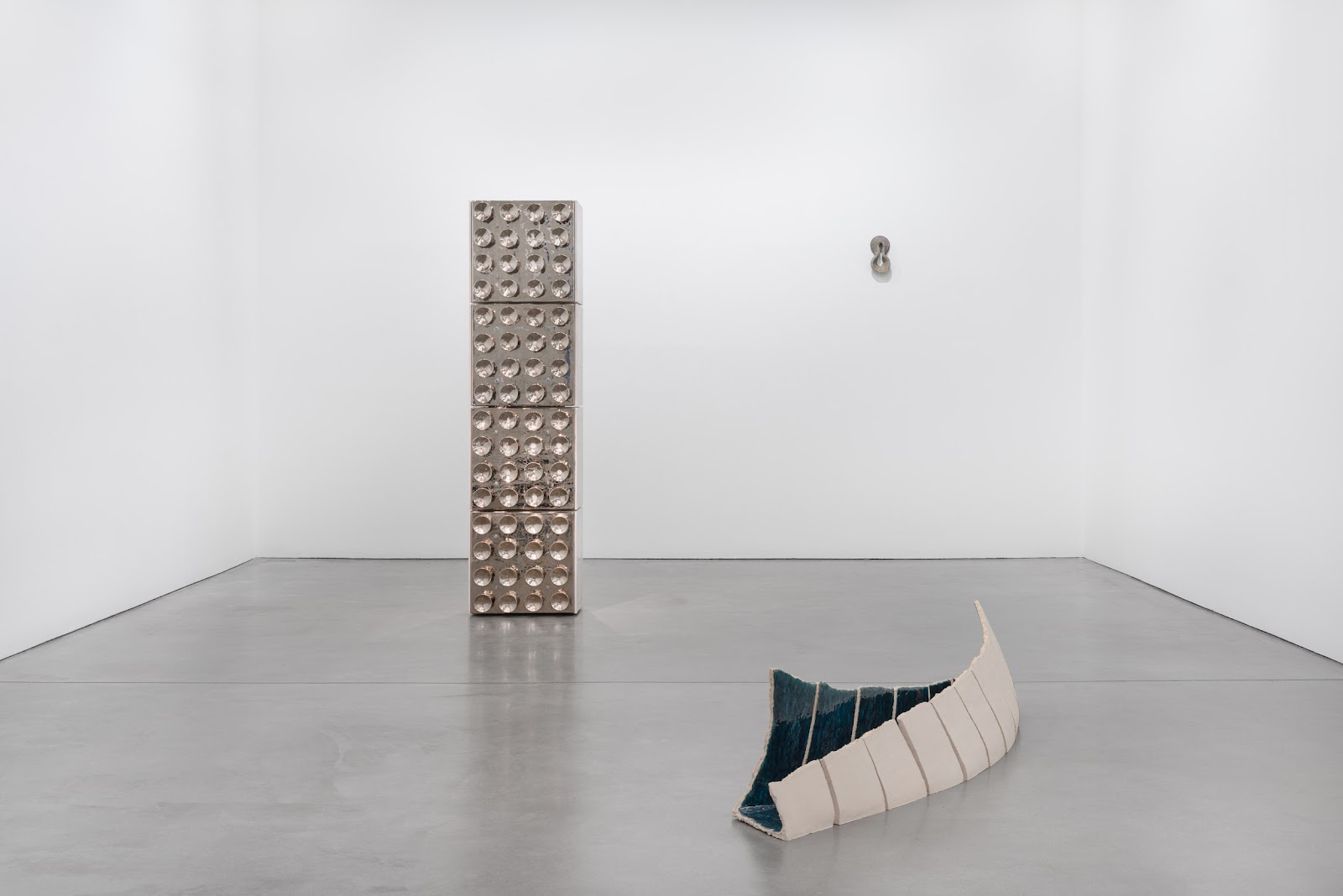 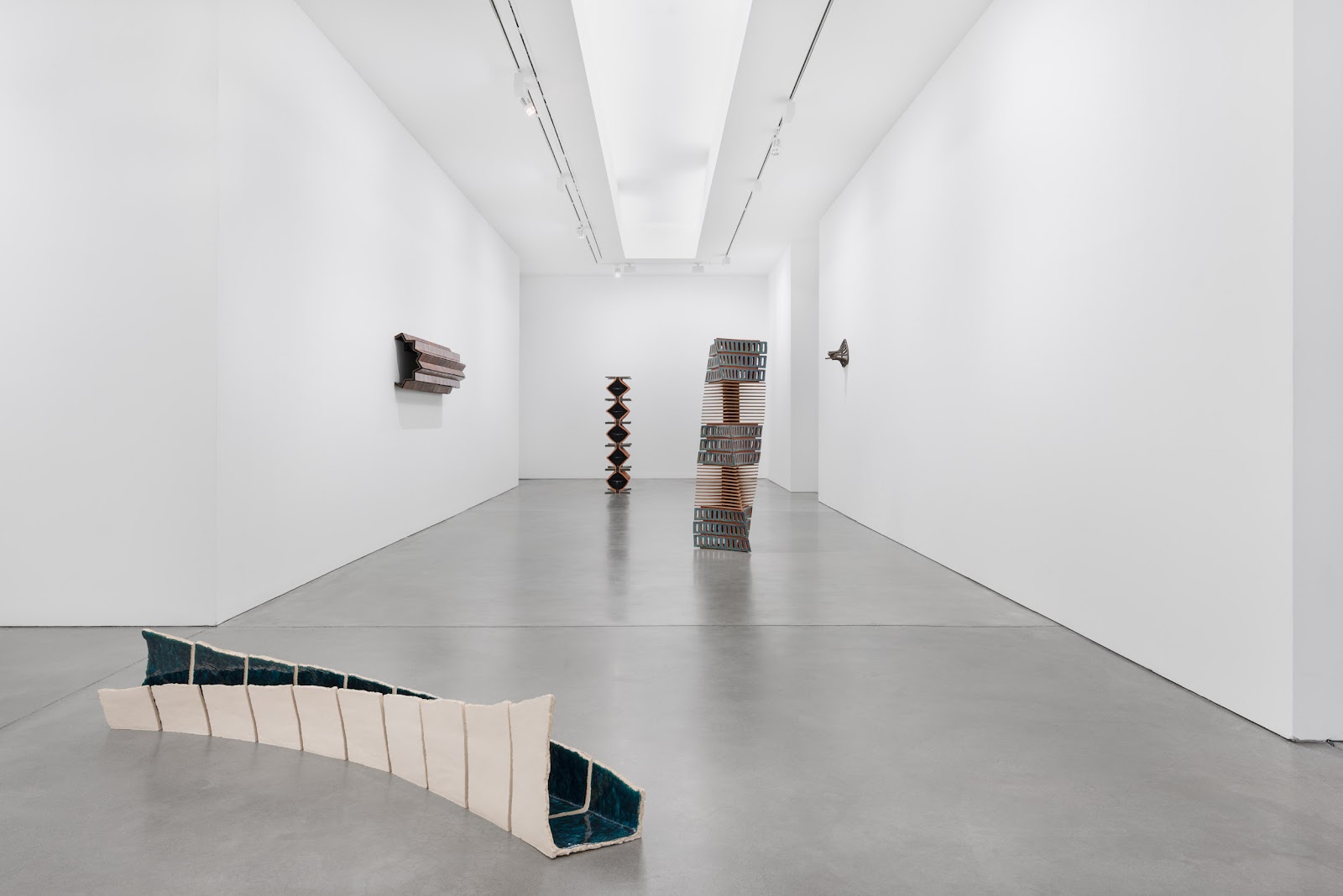 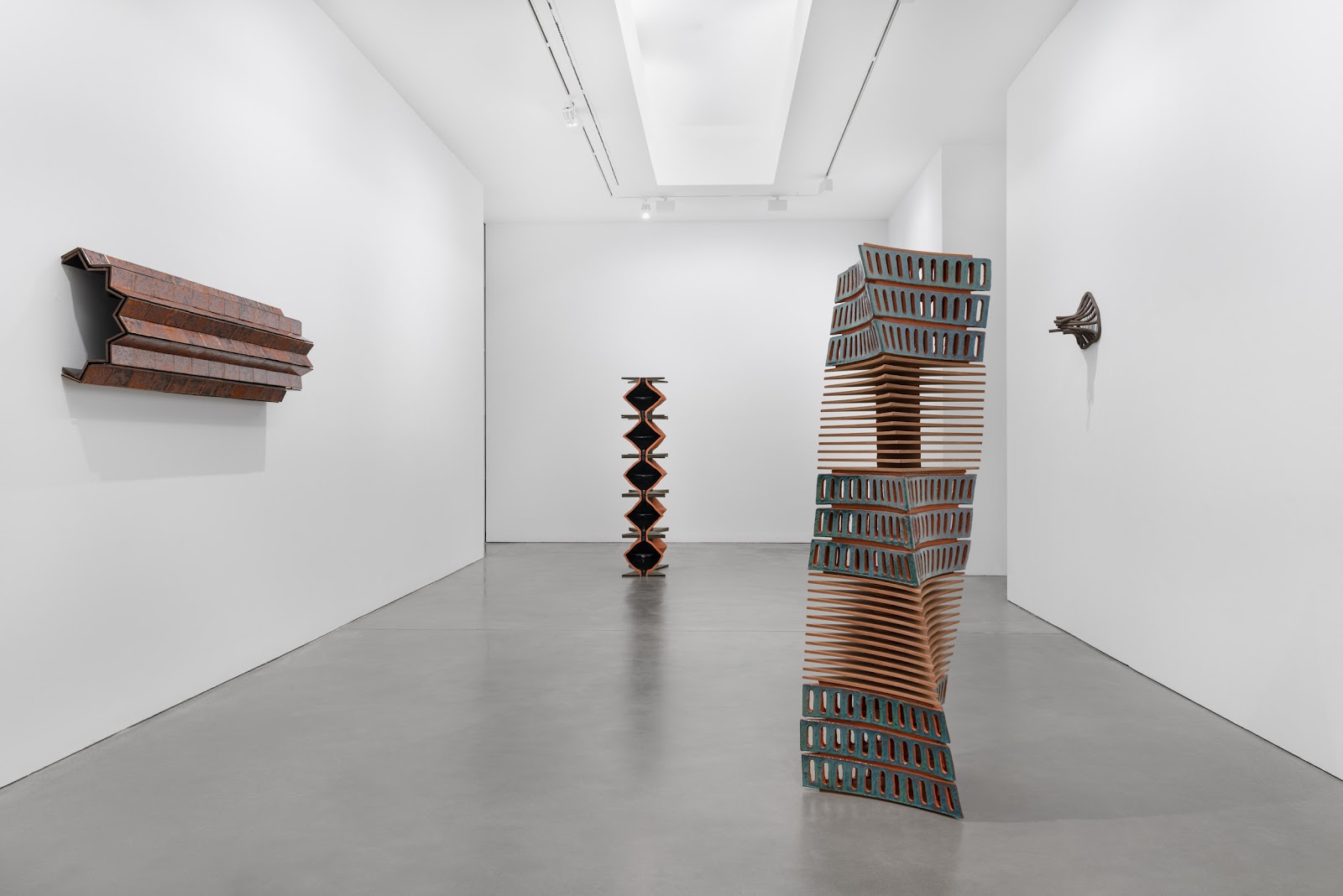 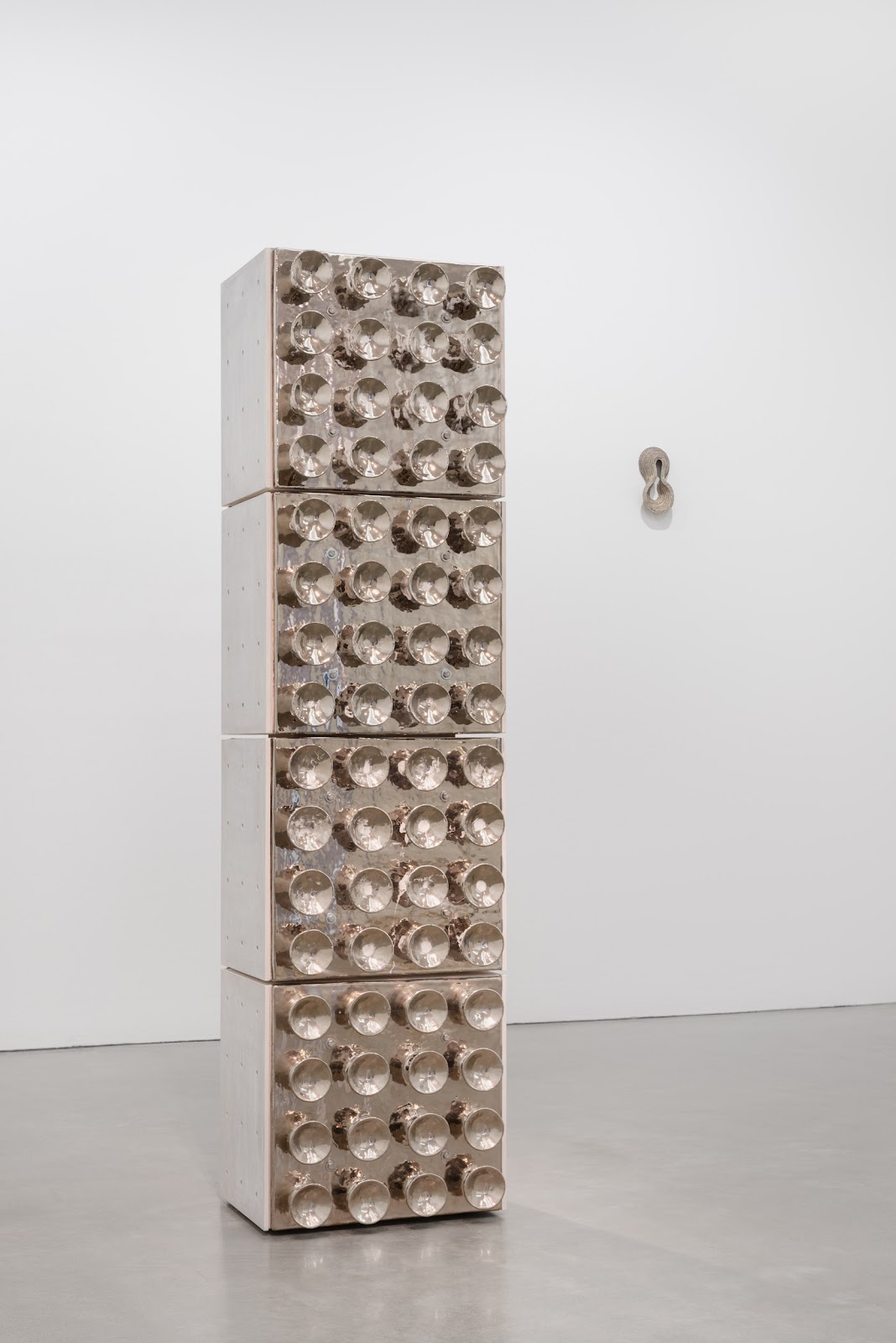 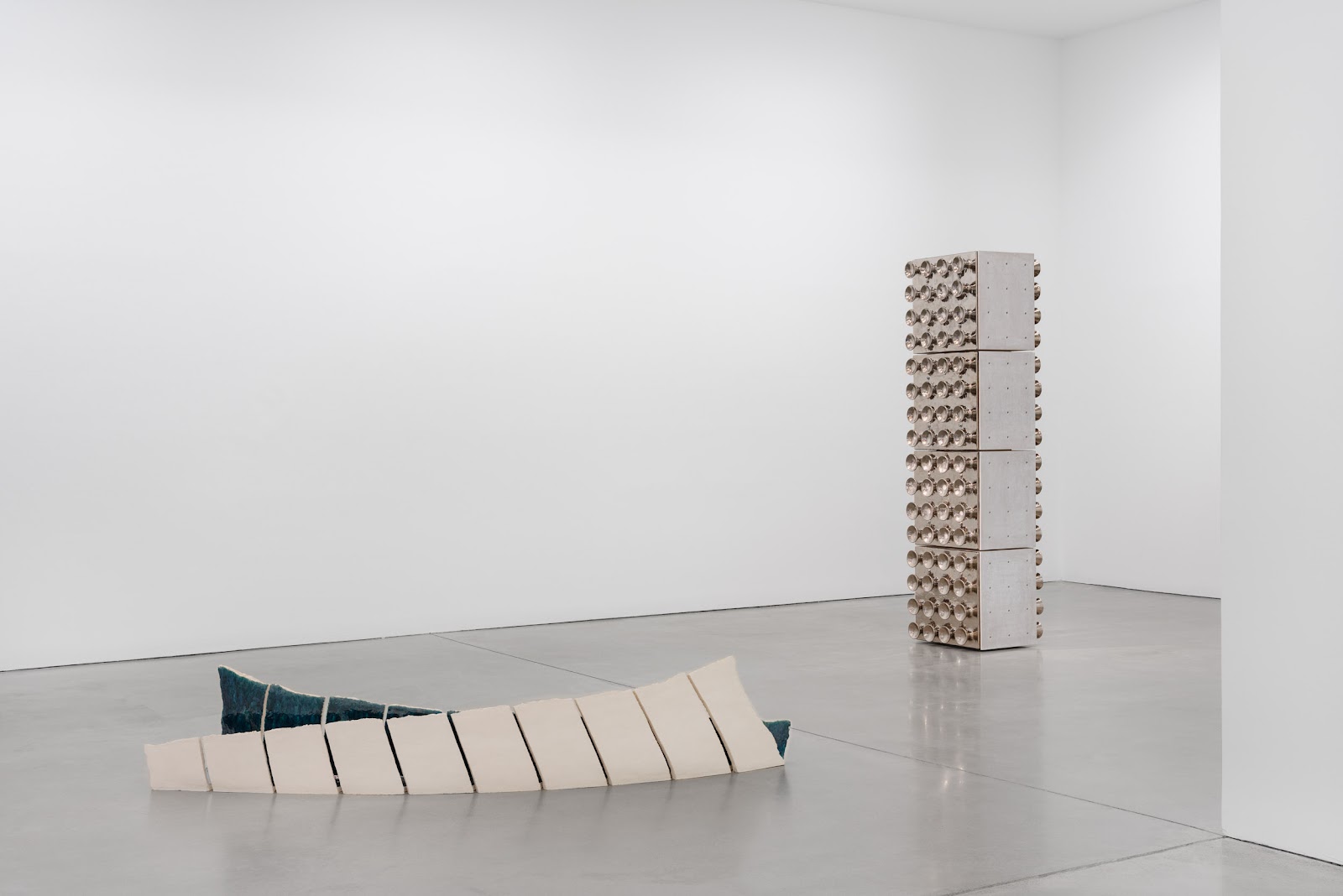 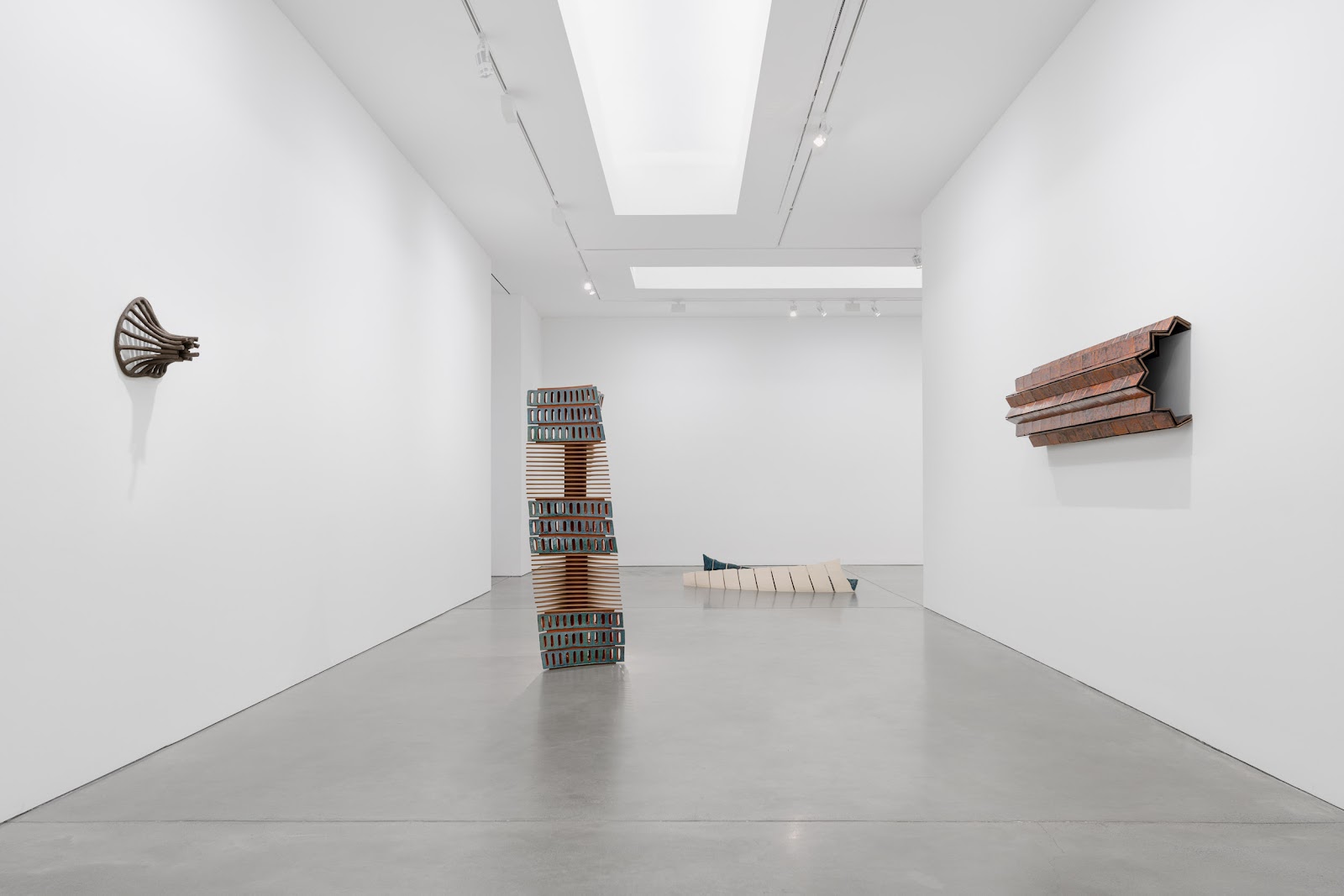 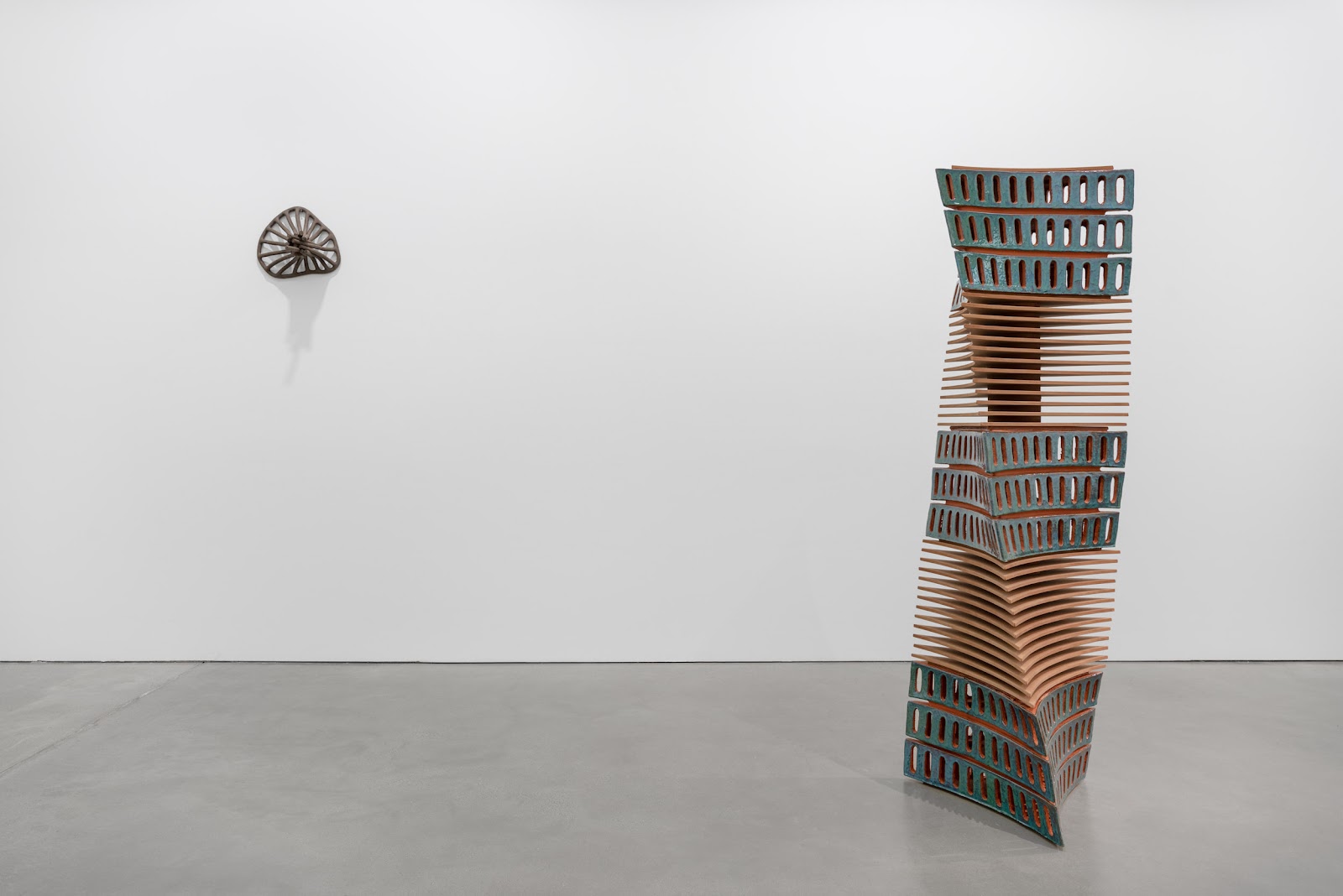 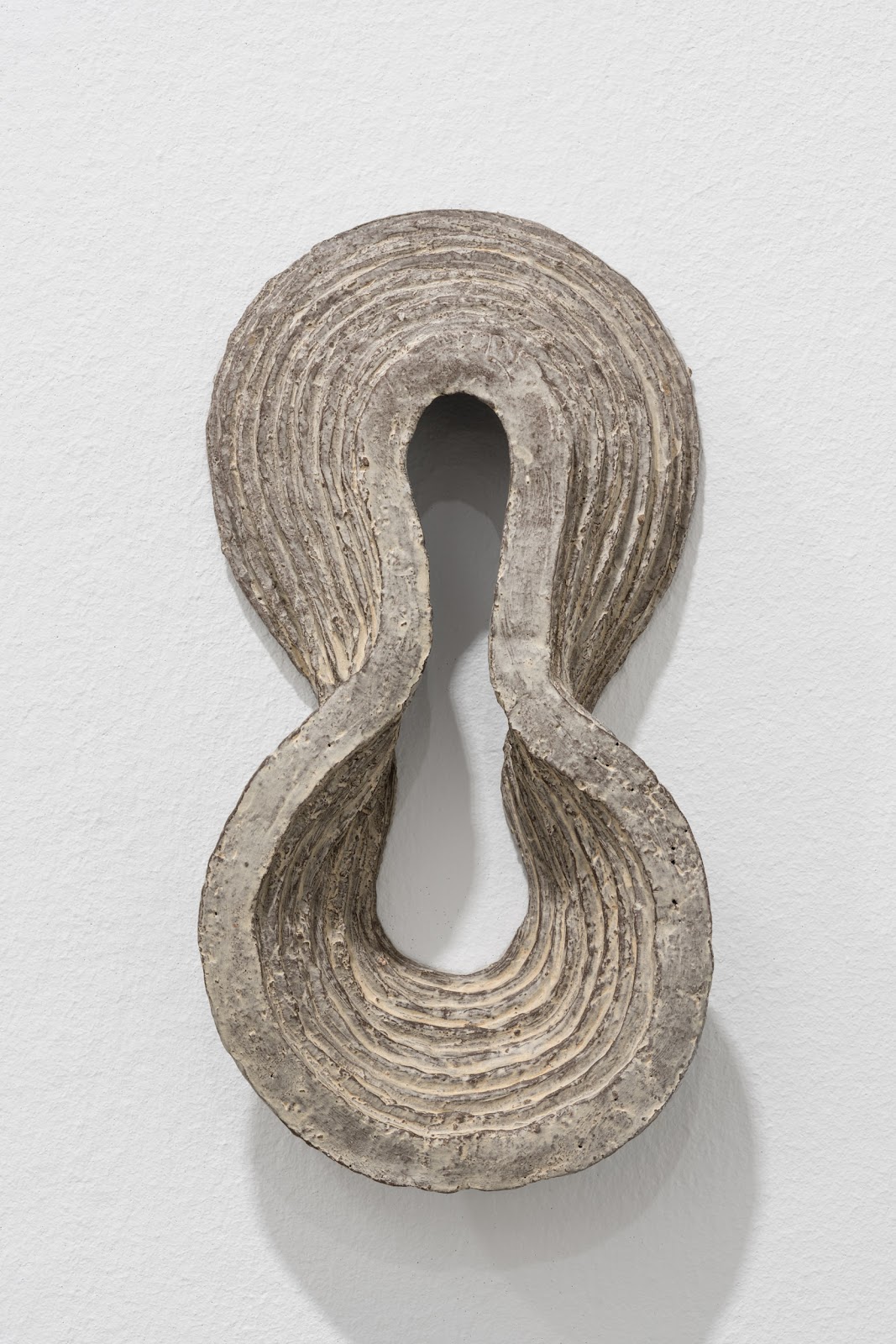 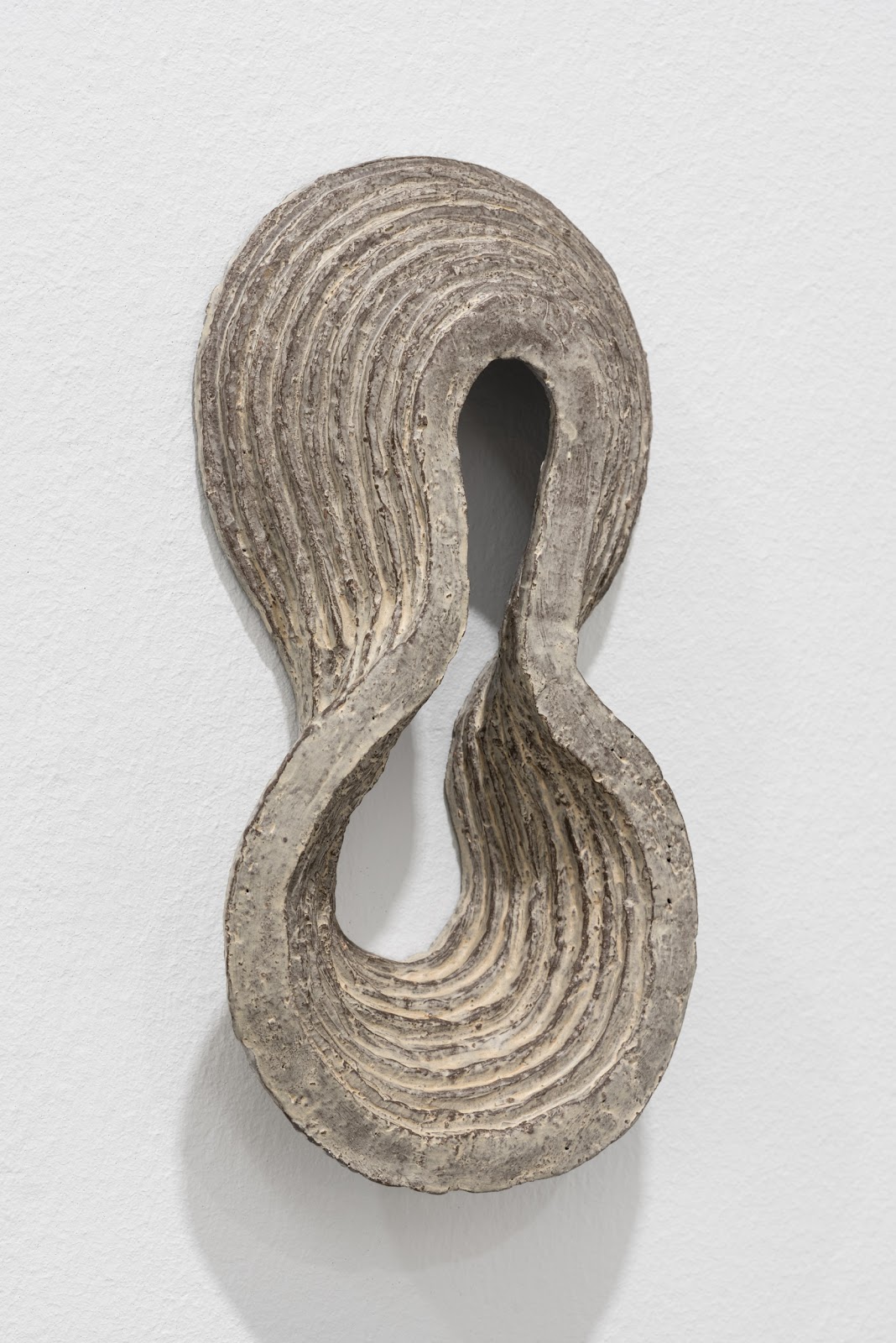 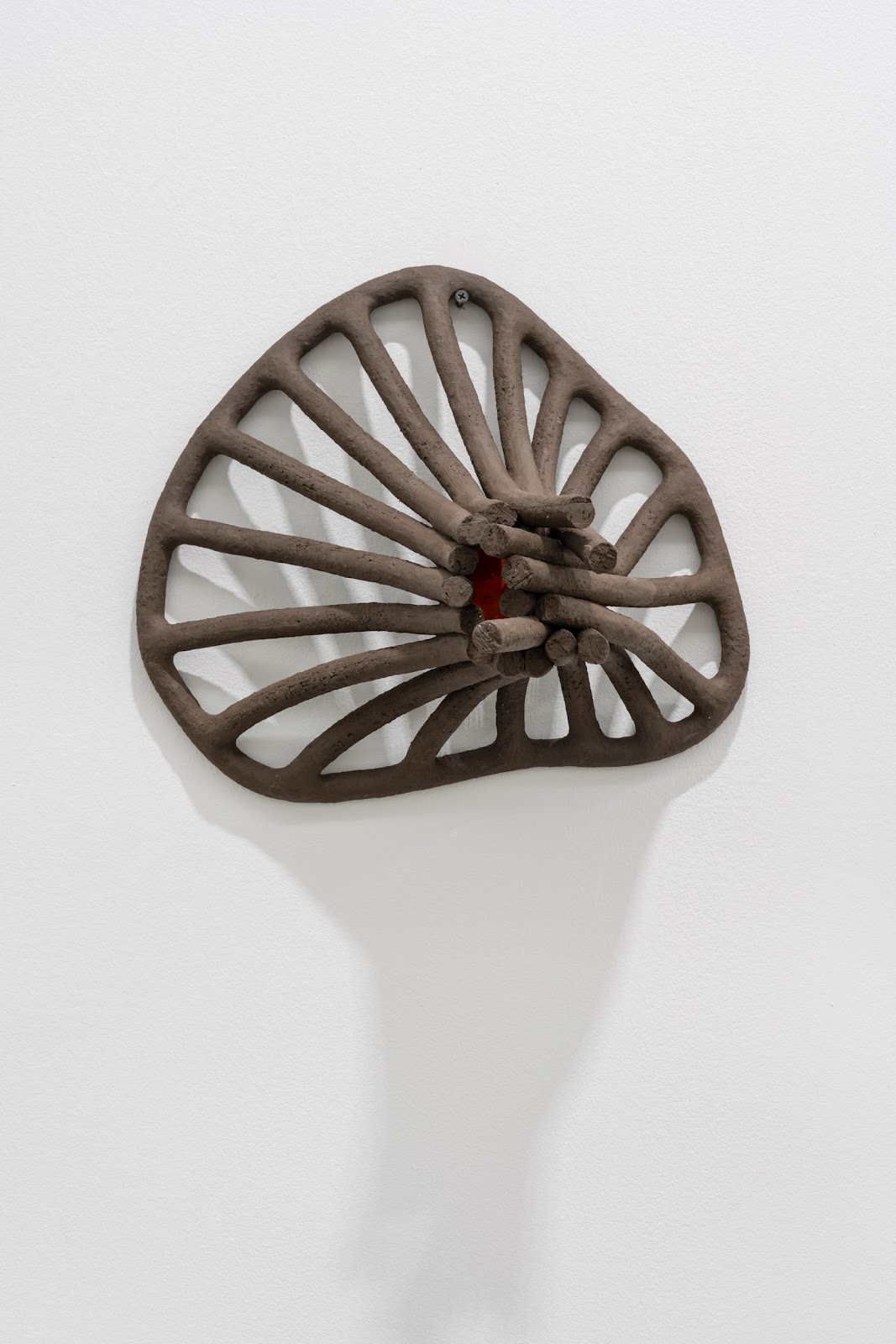 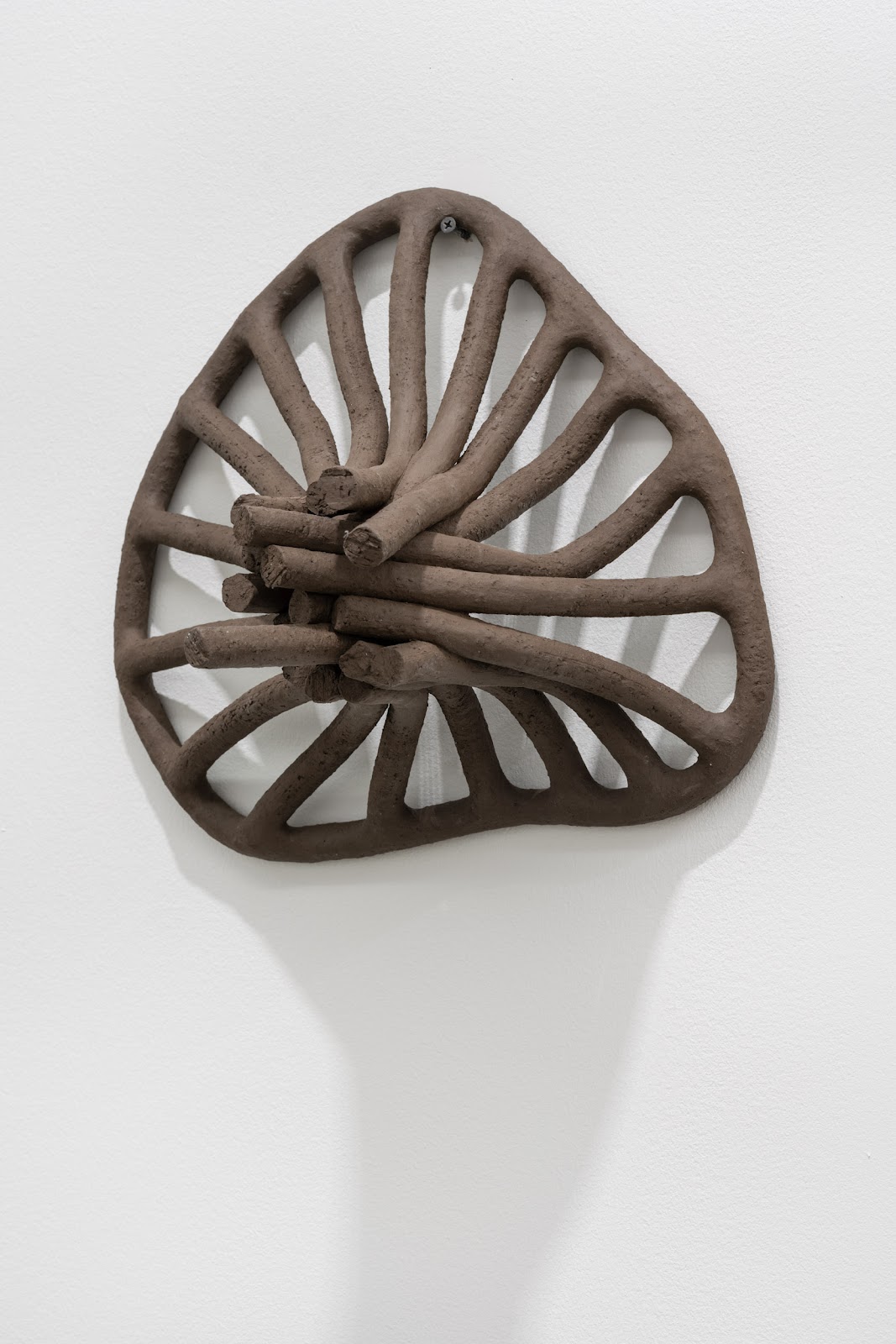 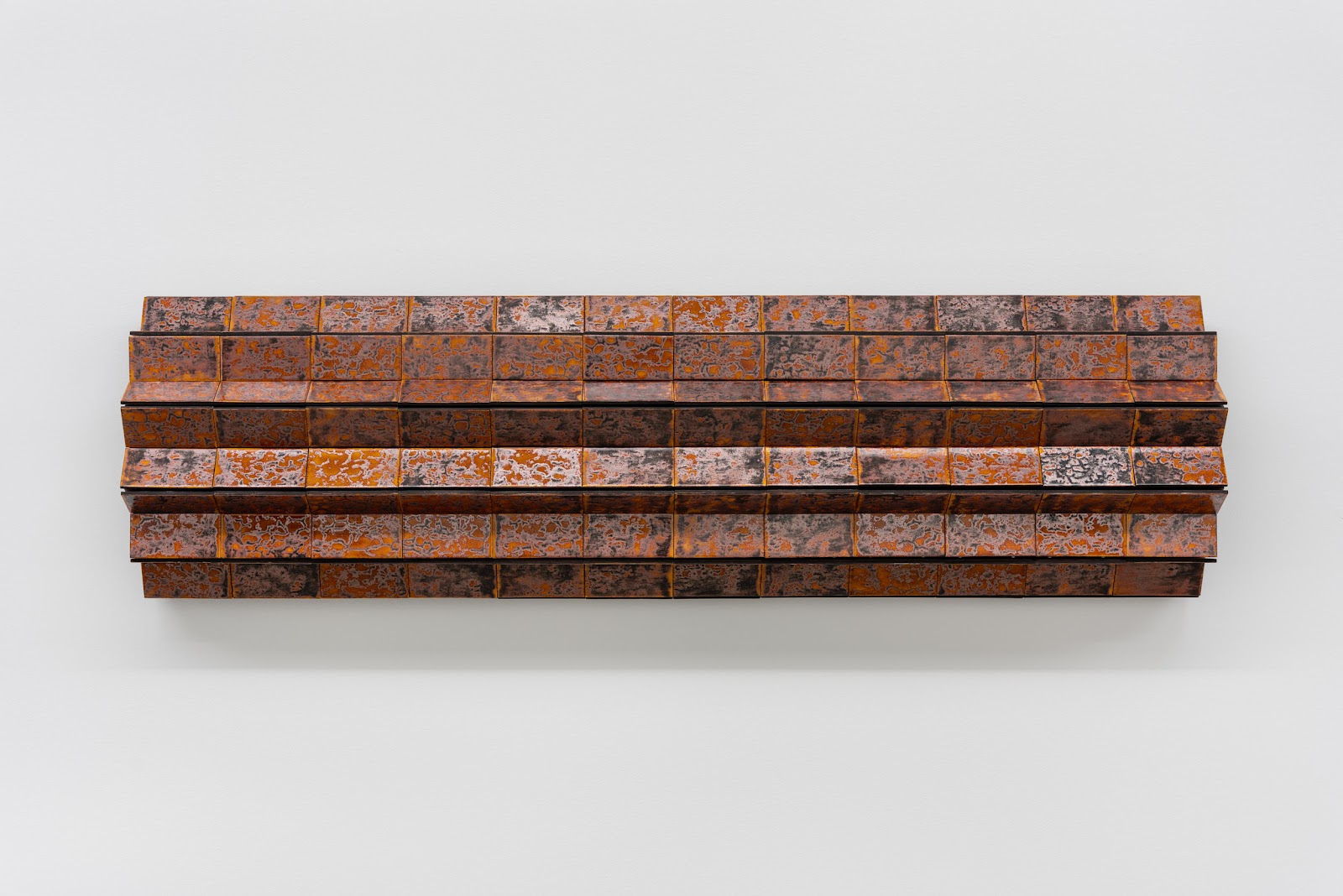 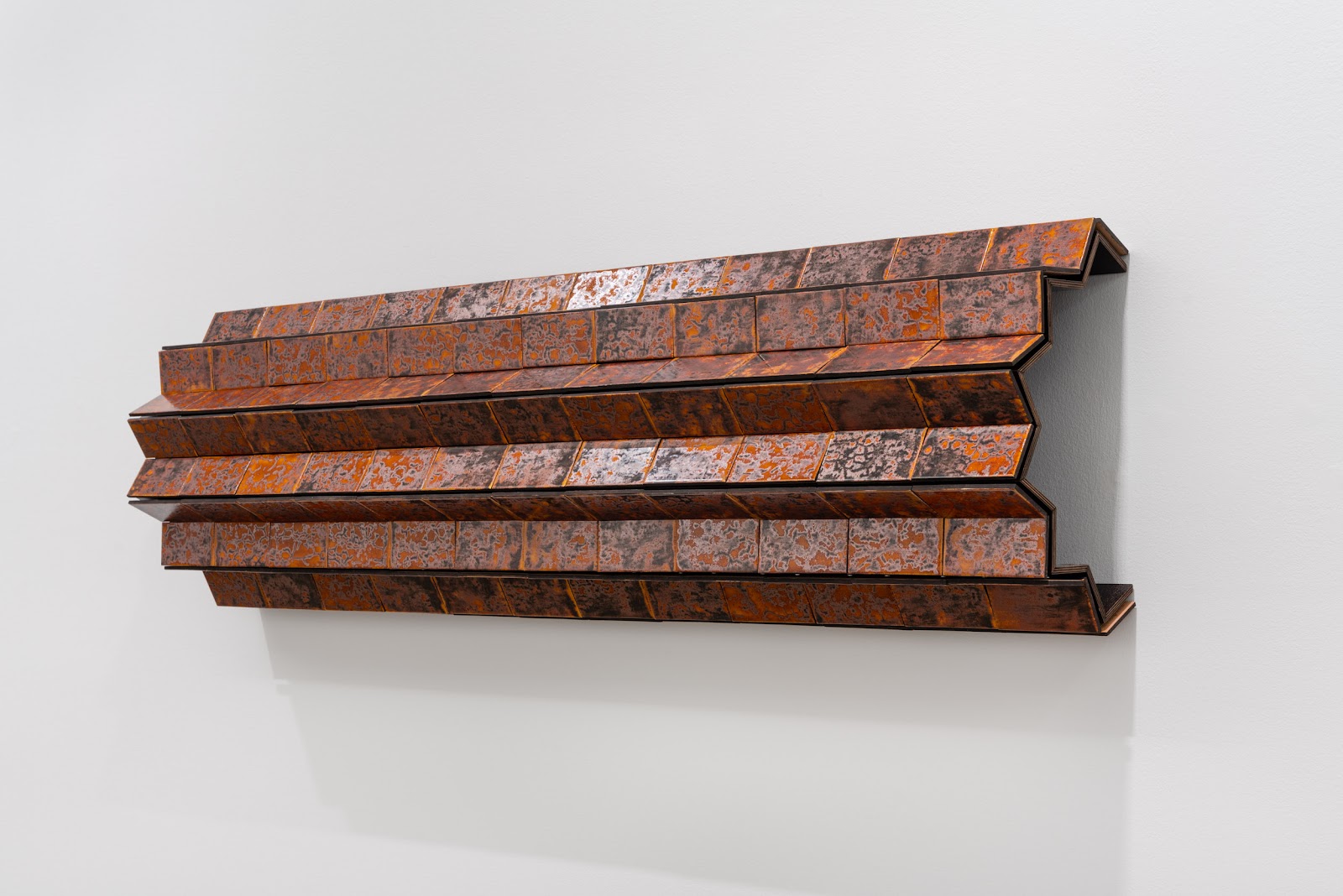 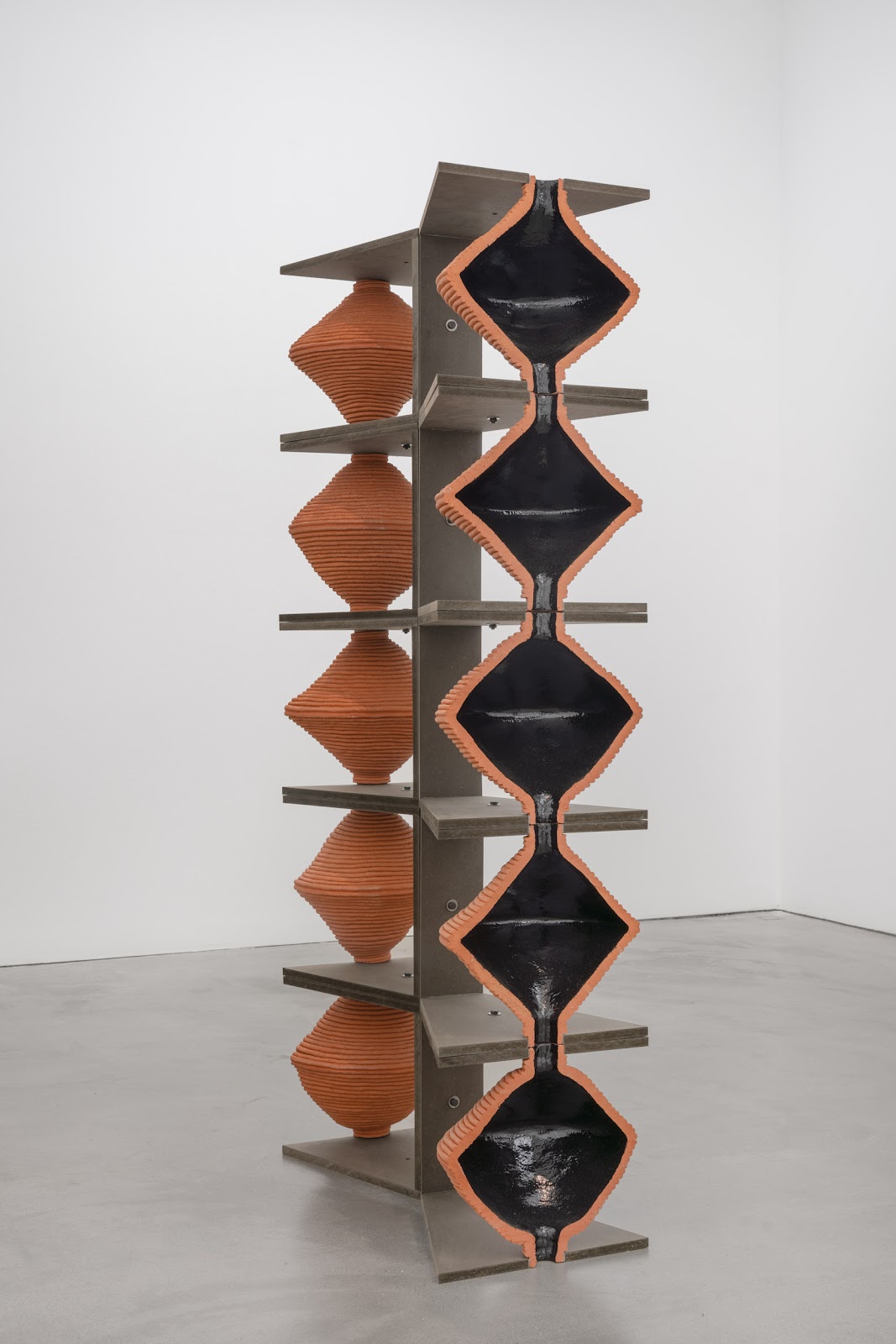 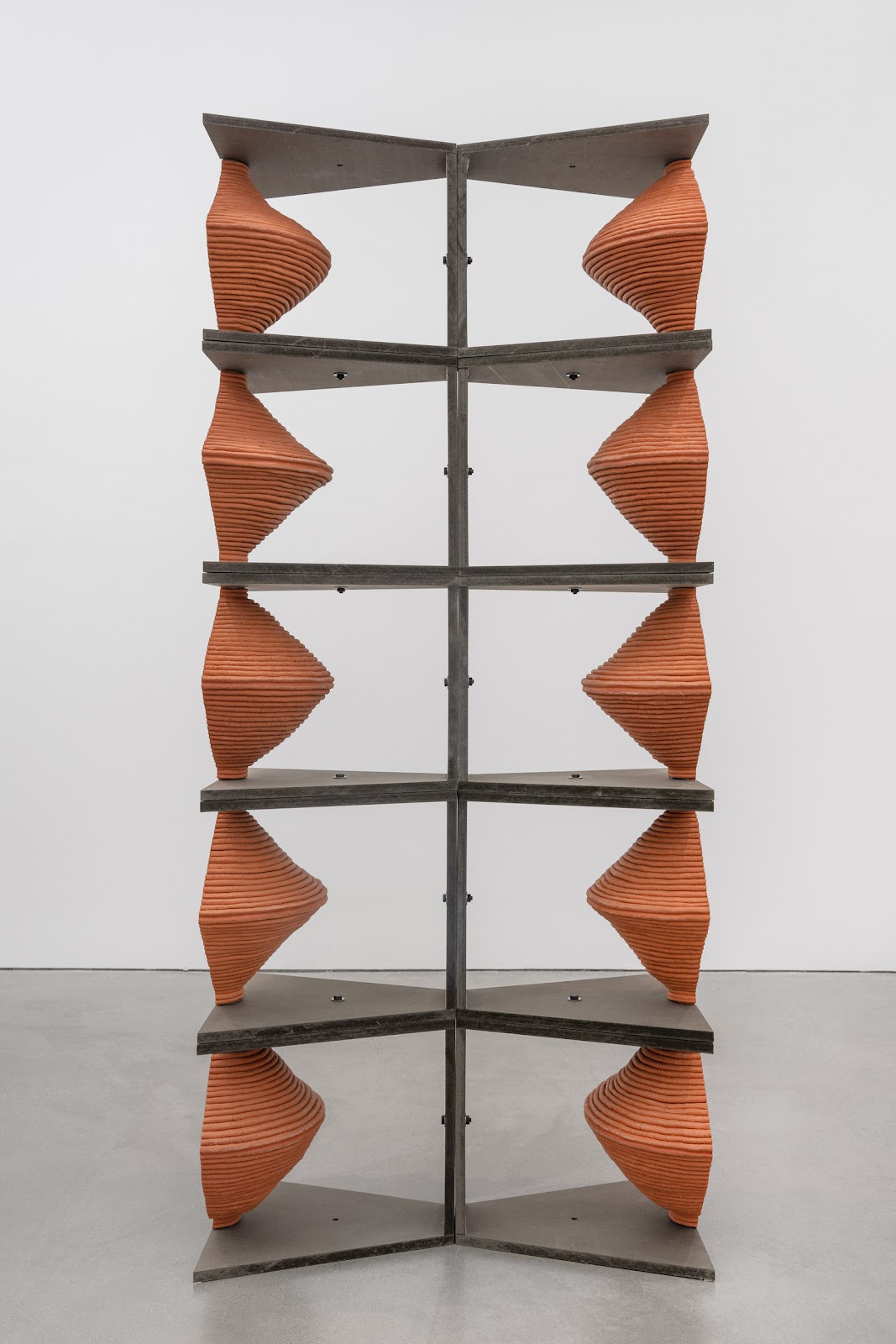 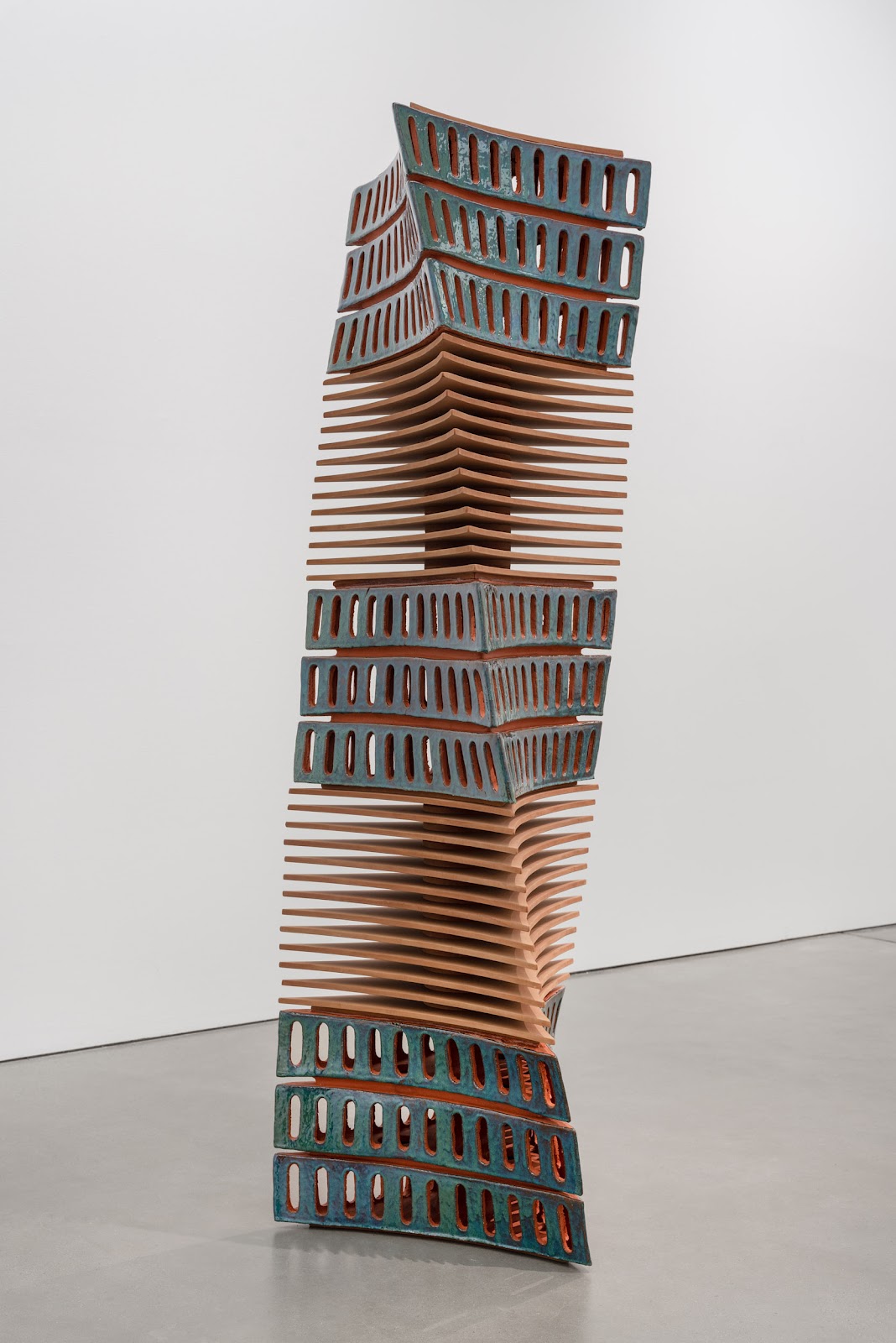 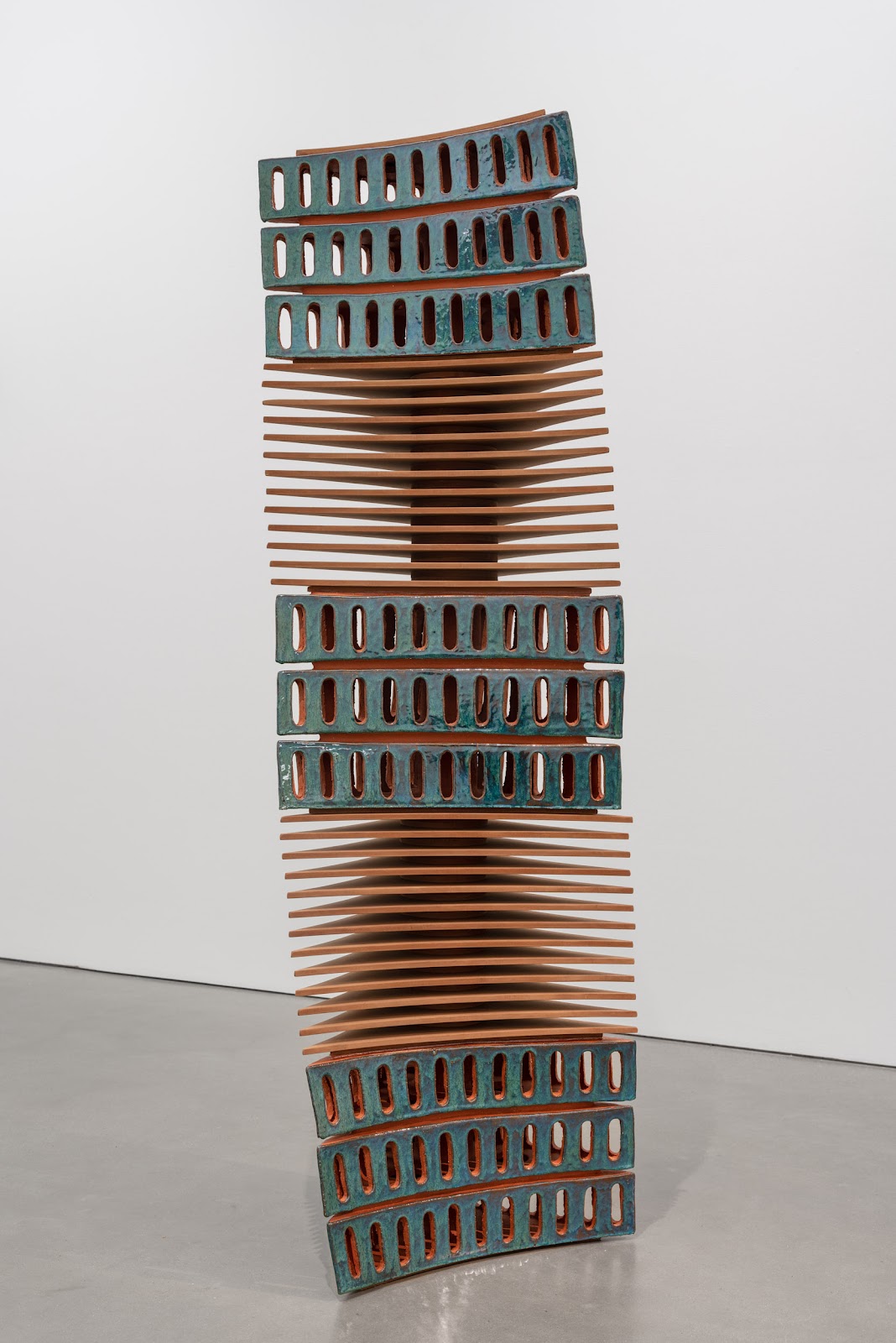 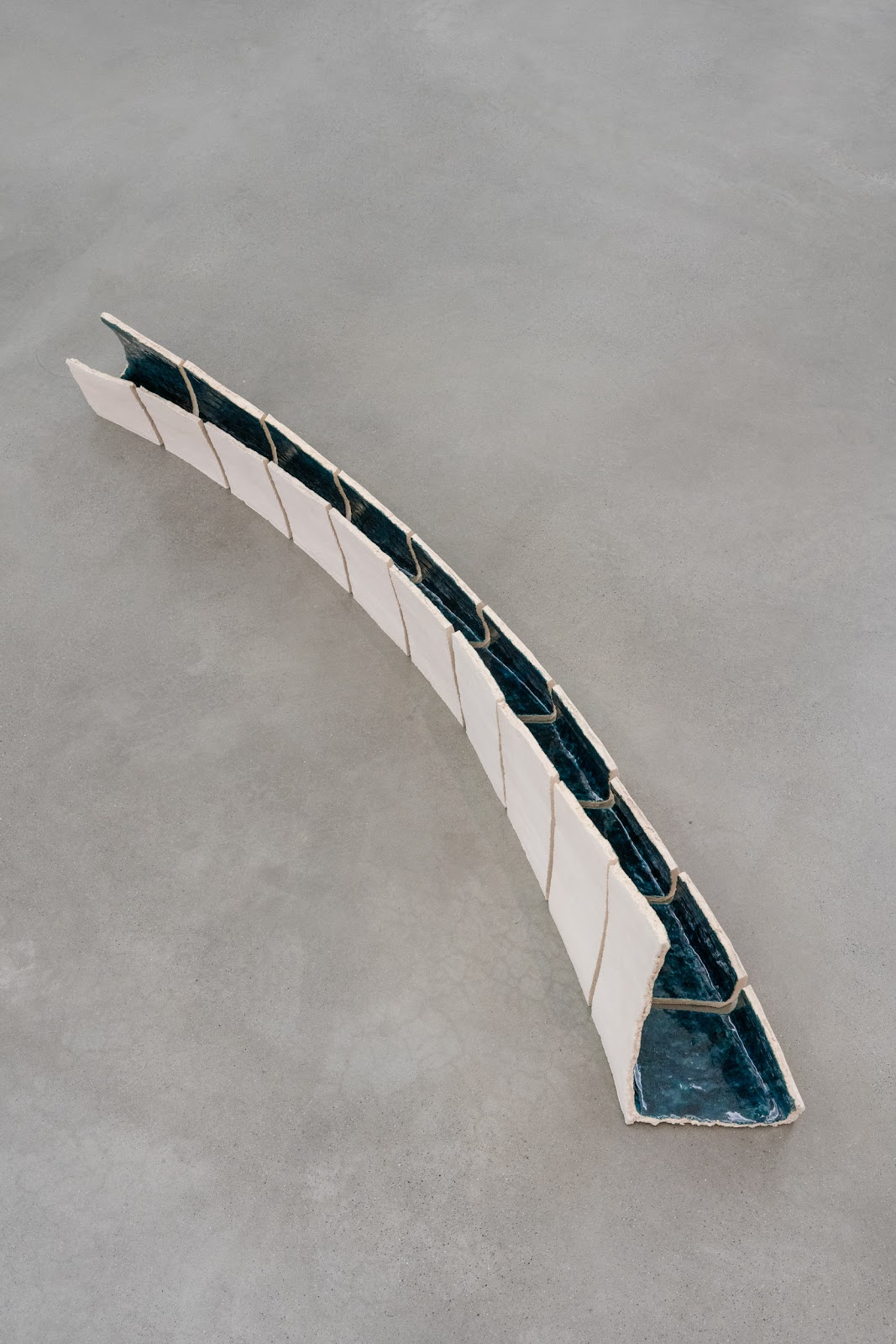 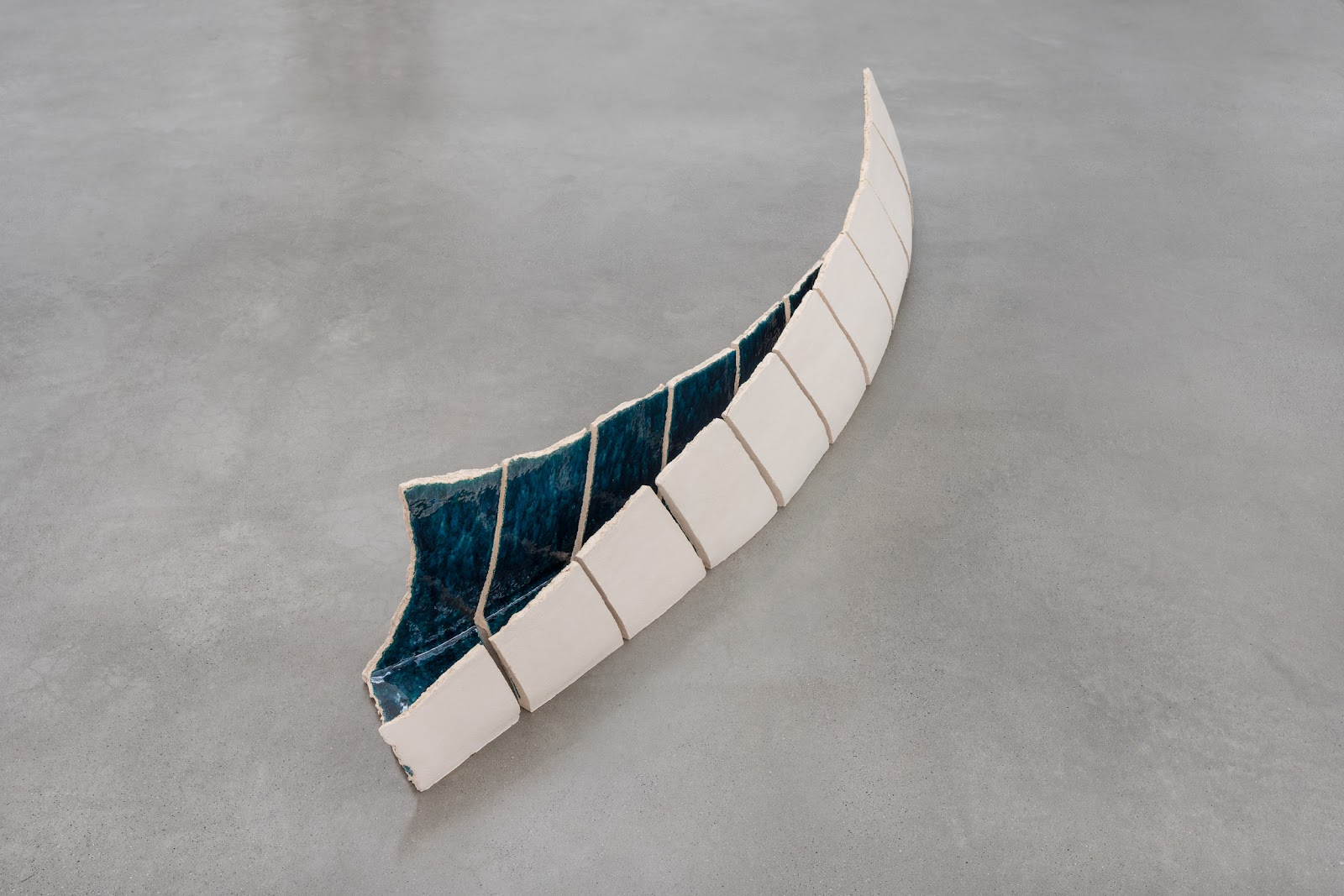 To encounter the works of Leunora Salihu is to encounter a noticeable presence. They make themselves felt with their human dimensions, the power of their form and materials, their balanced and conversational relationships with and to each other in space, and the amazing crafting techniques used to make them. These sculptural-architectural chimeras are characterised by their “being-there and being-so”.[1] All these qualities are ones the artist has been working at consistently and tenaciously for the last two decades.

In 2021, using the title Pieces, Salihu curated a selection of her recent sculptural works for exhibition in the well-lit pavilion of the Waldfrieden Sculpture Park. Enigmatic arrangements, displaying the rapprochement of nature and technology through the cooperation of their organic and putatively functional elements. Wood and clay—which bring together the nature-technology pairing that is so central to her art—are unsurprisingly her two most-used working materials. Wood as an industrially processed product and clay as one of the oldest natural working materials in the world. If one takes the titles literally, then it would seem that these most recent works deal with energetic phenomena such as light, sound, heat and water, which transmit themselves in wave form and materialise in open-ended systems and sequences. In Resonanz (2020), the sculpture stretches out horizontally in a row of ceramic shapes resembling sideways vases, which seem to oscillate in their expansions and contractions in between the technoid fibreboards that hold them aloft and connect them. Elsewhere (Welle, 2020), clay forms glazed on one side in a matte black attempt to insinuate themselves into a pre-existing rational system. The qualities at work here can be seen in the processing and handling of the clay. The self-confident perfection of the piece is both enlivened by and latently suffused with the obdurate nature of clay once it has been dried and fired, as well as by its ability to remember and reproduce “every touch”.[2] In Turm (2020), which from a distance resembles a powerful sound system, the role of communicating perfection is performed by sophisticated glazing. The rectangular tower rises up in blocky modules

and appears, at least from the sides made from fibreboard panels, to be straightforward and functional. The two other sides, however, are covered with rows and columns of black-green glazed ceramic objects resembling convex suction cups, which reflect the light that falls on them.

These kinds of natural phenomena inspire Leunora Salihu’s drawings as well. A medium that, in the course of her development as an artist, first came into play for Salihu during her studies in graphical arts at the academy in Pristina. The academic approach was strict, and instructors were unforgiving in their revisions, because,  after all, linework must be exact. “It was tiring […] but it was always a wonderful feeling to have made it through this process.”[3] The high degree of sensitivity and precision gained from her studies is still very much present in her current working method, which is intensive and characterised by its diversity of production processes. It can also be seen in her highly personal connection to the materials she works with.

The artistic language of Leunora Salihu is defined by a passionate grappling with materials, which find their way peerlessly into comprehensive new objects. The themes that are most dear to her are bravely and self-confidently brought out in her sculptures, even in these times of digitalisation, virtual reality and NFTs. They illustrate burdens and burden bearing, touch on gravity and lightness, acknowledge space and the space around space, and insist upon the tactile and sensory qualities of material. In their suggestive visual power, these works show themselves to be “carefully calculated flashpoints”, unforgettable situations—experienced, observed and developed out of the contrasts, contradictions and hazards of our modern world.[4] These entities by no means expunge what is known and familiar to us through the voiced silence of their obvious abstraction. Rich in ideas, evocative, powerful and radical, they much rather help keep the known and familiar all the more alive.

Leunora Salihu, born 1977 in Prishtina, Kosovo, from very early on, took up a very individual track which she continues to pursue, often combining in her sculptures different materials including ceramic, wood, and metal. Her sculptures, along with the spatial bodies and installations, explore the possibilities and limits of movements by using the repetition of organic and constructive form-elements. She has established a considerable and multi-layered vocabulary of industrial, architectural, and organic forms, which grant her works a sense of functionality, blurring the lines between where the sculpture ends and where the pedestal begins; between interior and exterior.

In 1999, she fled to Germany, moving her studies to the Muthesius Kunsthochschule in Kiel and then further to the Art Academy in Düsseldorf. Since then, she has received several awards and has been included in a number of group exhibitions at institutions including The National Gallery of Kosovo (2017), Philara Stiftung (2015), Herzliya Museum of Contemporary Art (2015), Temporary Art Centre, Eindhoven (2015), Museum Kunstpalast Düsseldorf (2014/15), and Kunstraum Düsseldorf (2012). Salihu’s first noteworthy solo exhibitions were in 2011/12 at the Lehmbruck Museum in Duisburg and recently at Skulpturenpark Waldfrieden in Wuppertal (2021), Philara Stiftung (2020), and at the K21 Kunstsammlung Nordrhein-Westfalen (2017). She was also nominated for the Prize of the Böttcherstraße in Bremen (2022). Leunora Salihu lives and works in Düsseldorf.