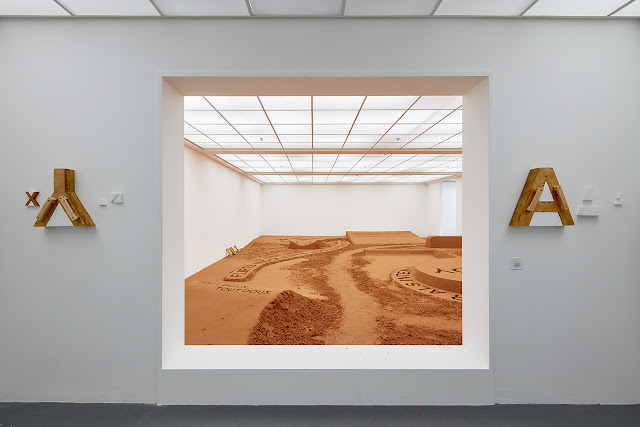 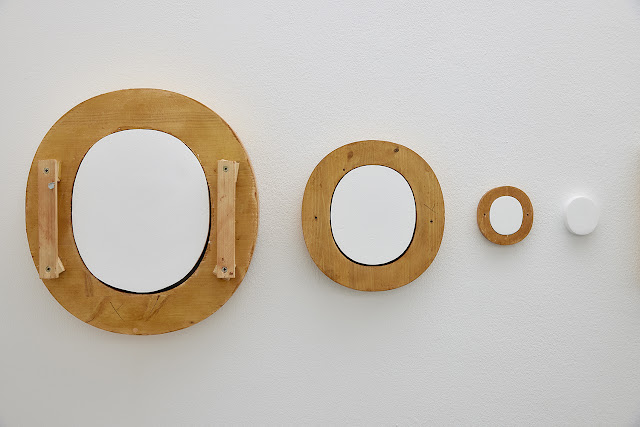 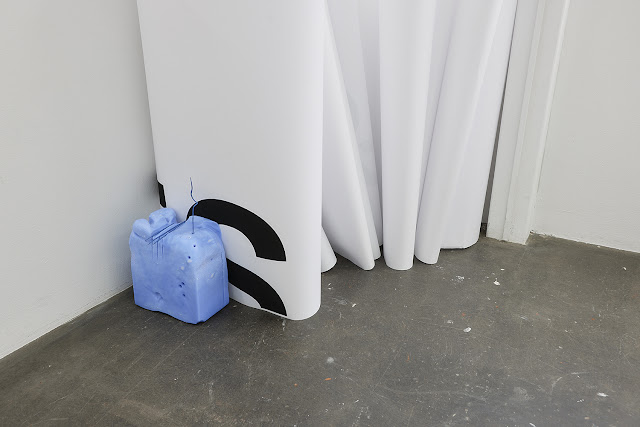 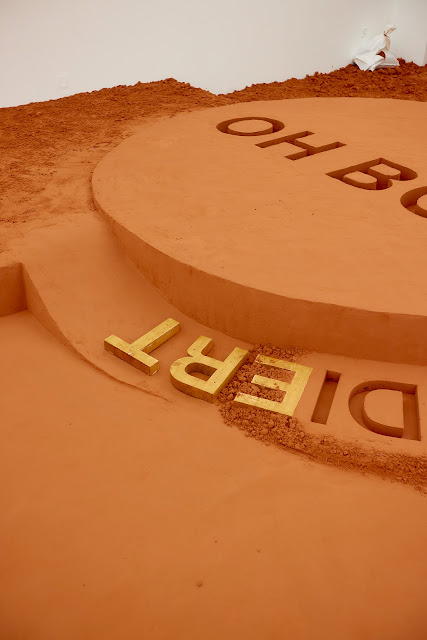 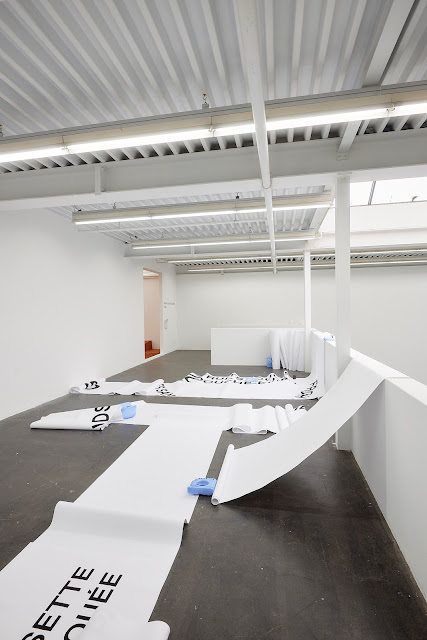 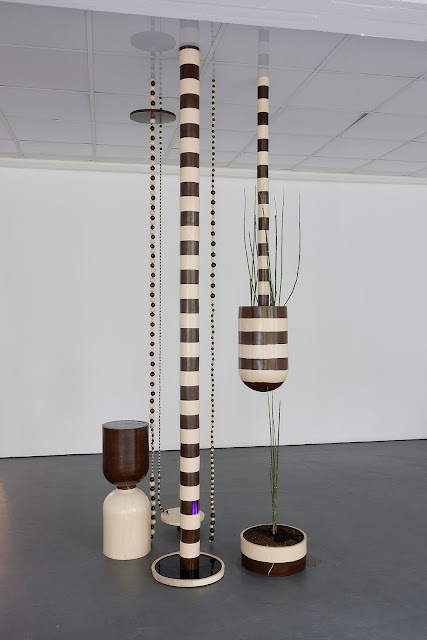 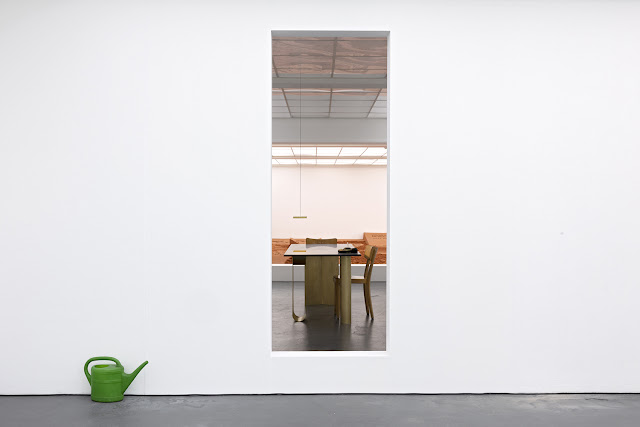 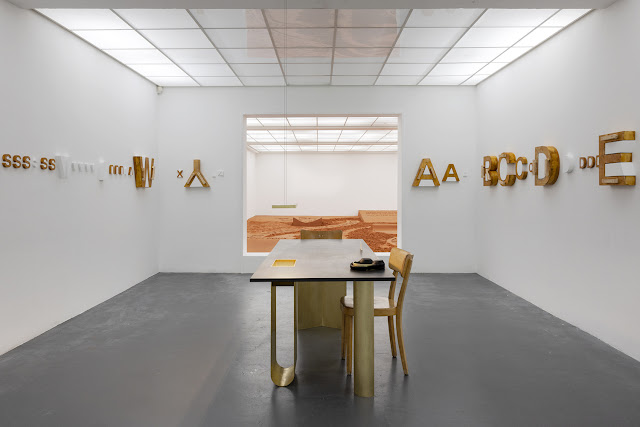 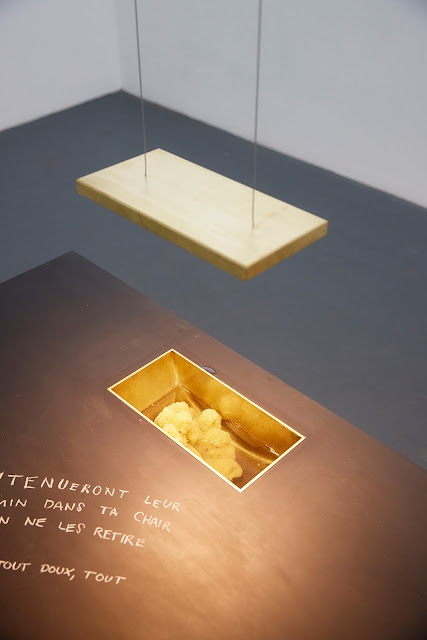 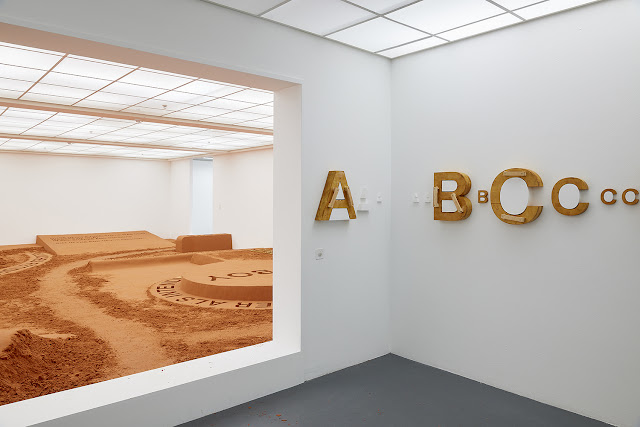 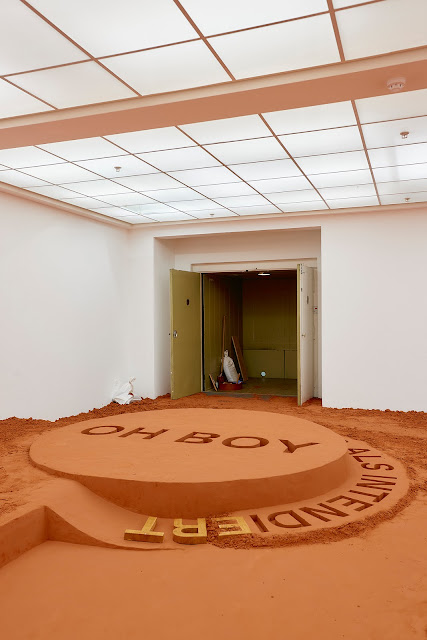 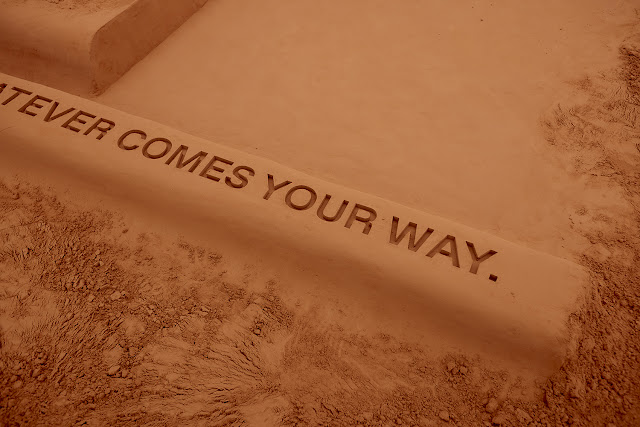 A space like a garden, a field of sand, a smooth surface, a sheet of paper, ready for what is to come. A space in which words condense, disappear, will reappear; where language, like an archaeological site, may gradually be exposed, remembered, condensed and understood in new ways. After all, Maude Léonard-Contant considers language a tool. A tool that can be used to create a garden, for example, but also to cover the new with the old and allow it to become overgrown. A garden that can be wild or also tamed and orderly, that can blend and mingle with the exotic and unknown.
The artist herself is at home in many languages, in their rhythms and meanings. Léonard-Contant grew up in Quebec, in the French-speaking part of Canada. The artist moved to Switzerland a few years ago, first to Lucerne and later to Basel, where she currently lives with her family. English, French, Swiss German and Standard German are both mother tongue and foreign language to her. They are also everyday life and material for her ongoing body of work.
Digs is therefore more than just the title of her exhibition at Kunsthaus Baselland; it is more like an apt descriptor of her process as an artist. Excavating words, language, meaning—digging them out, extracting them, immersion in them, at the same time also the settling-in, making one’s home in an unfamiliar place one has not lived before—linguistically or physically. Digs also implies exploring materials that lie beneath the surface. Sand, clay, slate, water, oils, and sea sponges are mixed with chalk, plaster, ink—or language, which the tongue is sometimes able to speak even when its meaning remains elusive.
Léonard-Contant’s arrangement is an invitation of sorts. An invitation to the viewer not to simply walk through the space at Kunsthaus Baselland, but to linger in it. To come back to and revisit the changing sand garden of text fragments and words again and again, to read the arrival and disappearance of meanings and contexts and find one’s own place within them. The large slate table in the spatial structure at the center is, likewise, an invitation to pause. Visitors listen through headphones as a speaker spells out words in three languages with their respective sounds and rhythms—words that may seem either foreign or familiar when written on the slate surface of the table in chalk. Every language is new to us at the beginning, incomprehensible, only sound and rhythm; every child has to gradually get used to the language spoken by its parents, the language that surrounds it. It must understand and attribute meaning to what is said.
The artist also invites us to spend time in the large, windowed room, a space where she shows a kind of condensation. Similar to the way letters can be used to form words and sentences, accumulating to create poetry, texts, and interpersonal communication, here we find clay vessels made of materials such as sand, sculptural formations made of salts, hues created with an accumulation of coloured pigment. A characteristic feature of the artist’s work is her use of various, diverse materials—clay, sand, bamboo, wood, paper, plaster, glass, etc.—to create delicate sculptures, mostly informed by growth processes and patterns found in nature.
Just as language and culture are malleable and changeable, Maude Léonard-Contant’s work must also be understood as an ongoing process of making. Accordingly, the artist herself can also be spotted in her exhibition from time to time—to see to the arrangement and continue developing it, but also to spend time with her infant daughter. Being a mother and an artist also means managing one’s time, making use of it and striking a balance between life and work: finding harmony between them, but also ensuring a flourishing of both.
As a result, Maude Léonard-Contant’s work, which occupies several rooms and the gallery, is like a delicate trace that is at once precise and definite, simultaneously personal, intimate, and collective. It is a language to be deciphered in layers and at different points in time, one that illuminates contexts and facilitates their understanding. Time and again, the artist both illustrates and questions the nature-culture divide that appears so often in language use, and in general understanding. Why do we speak in terms of either/or, rather than both/and? An outcome of this is that materials in the exhibition—elements such as sand, salts, slate etc., with their stories and complex contexts—become exhibition protagonists in their own right. She works with them to engage us in a dialogue. The artist considers every exhibition an open door to be entered, a chance to listen, pause, write, and reflect, regardless of a visitor’s linguistic or cultural background. Intrinsic to every language and its development are not only what is meaningful or can be clearly named, but also what is silent and what is loud, a particular sound and rhythm, a poetry of the fundamental. (Ines Goldbach)