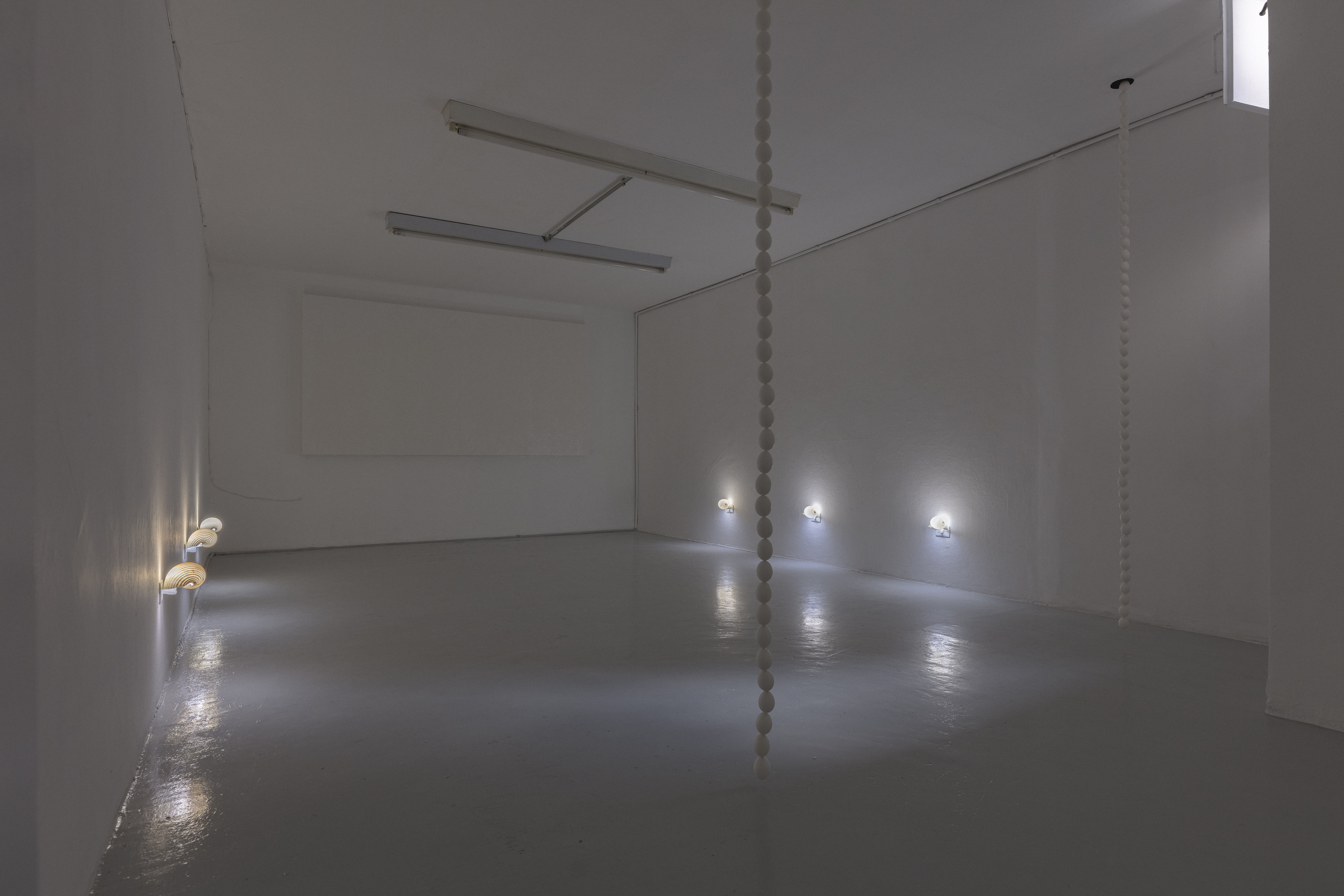 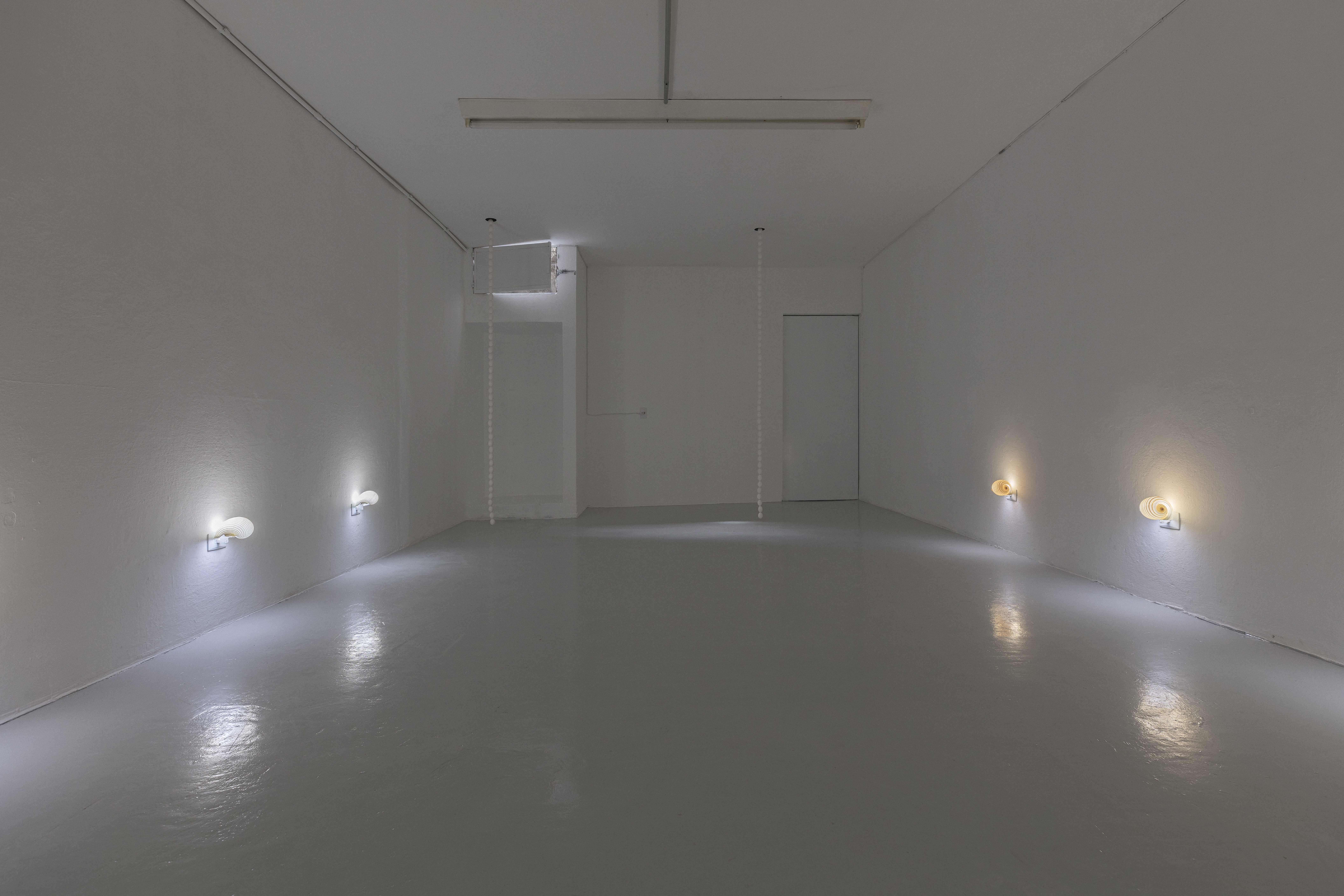 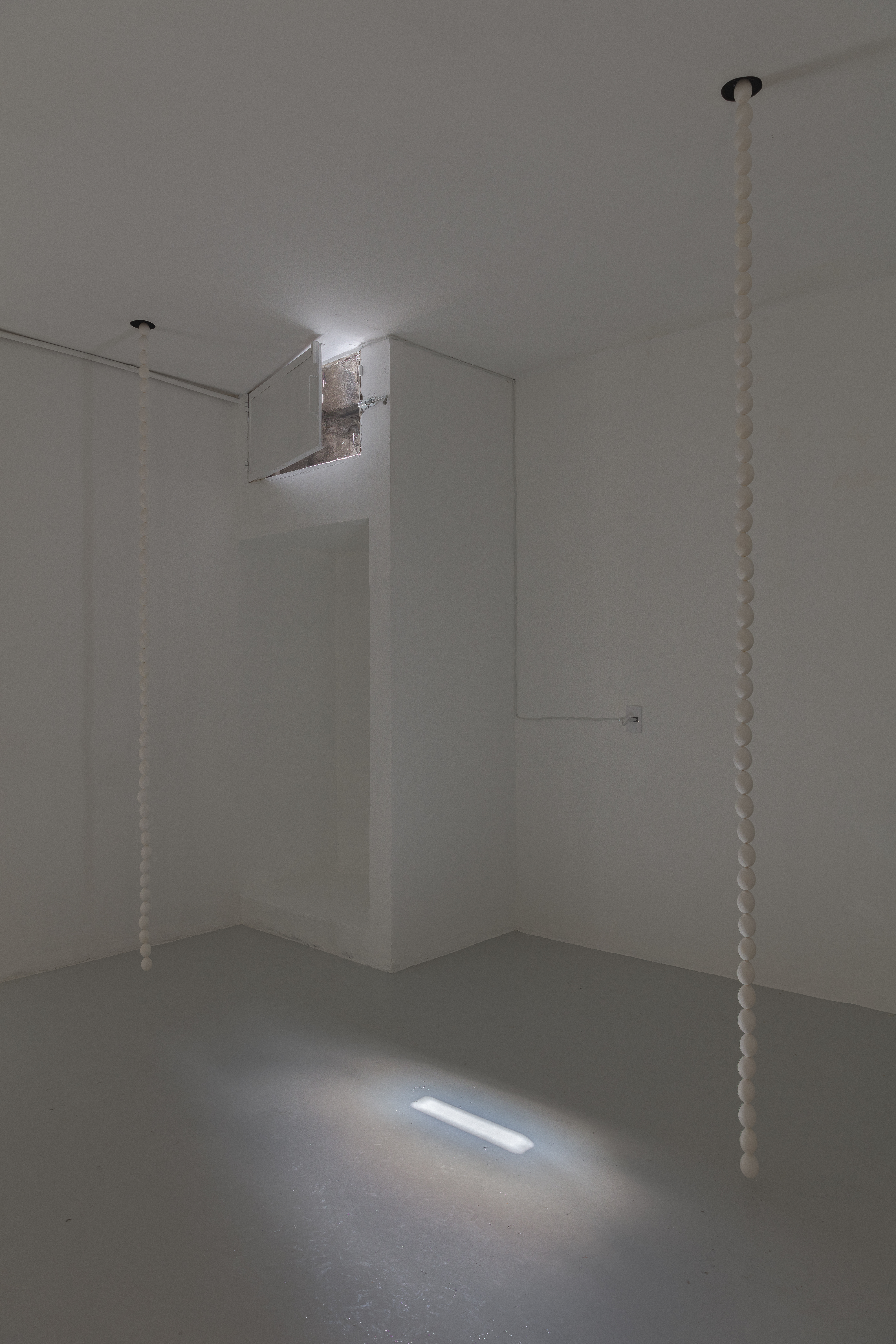 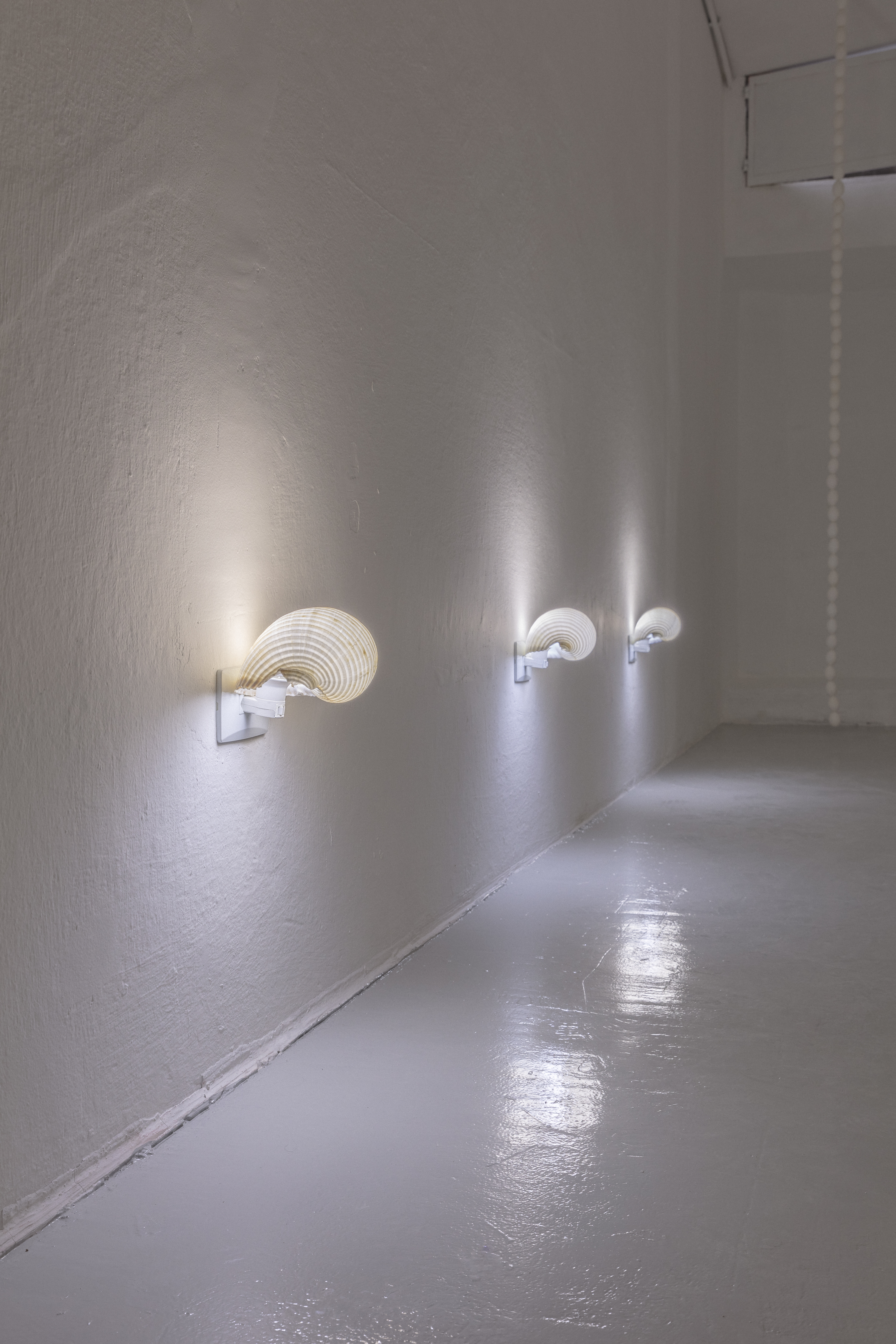 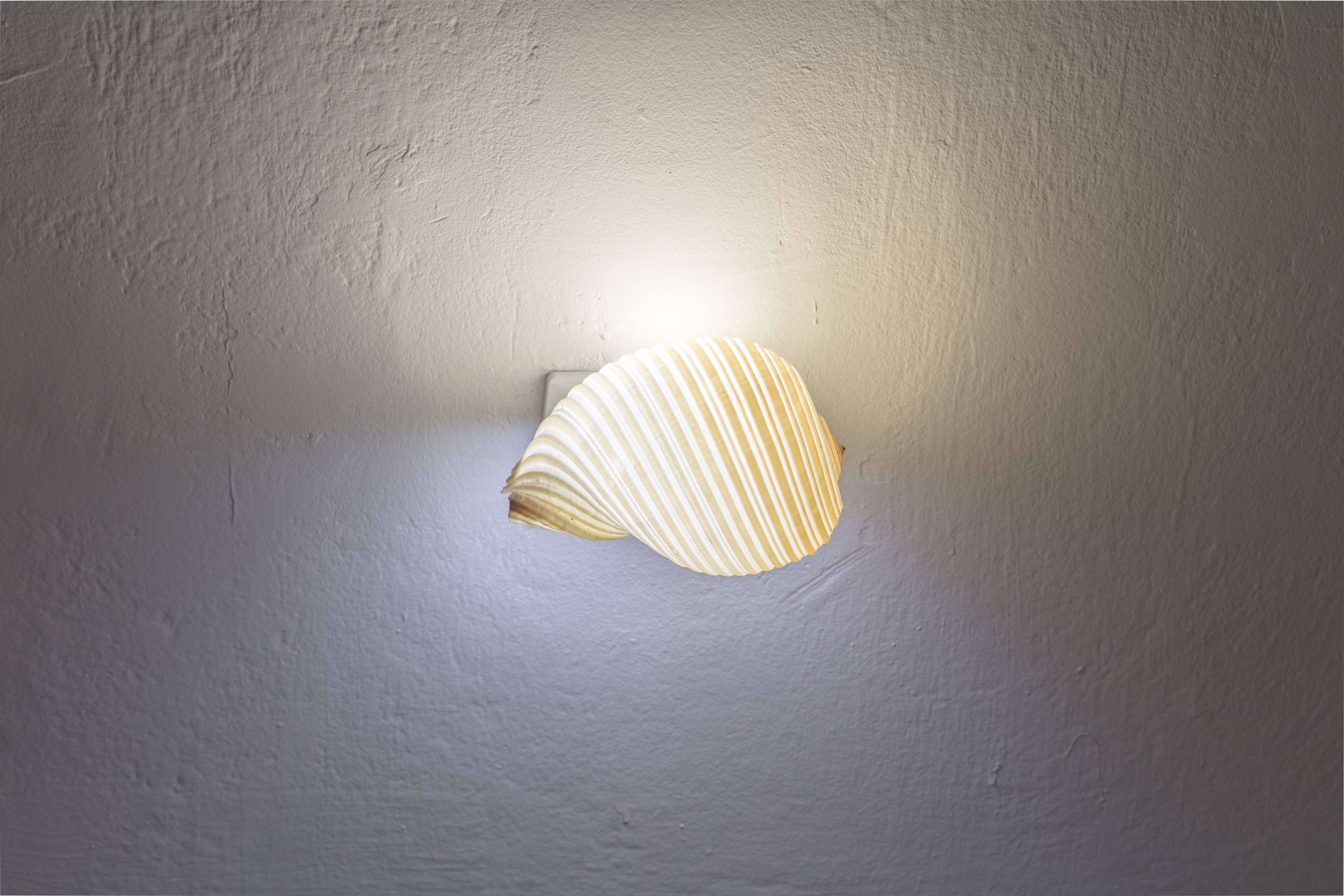 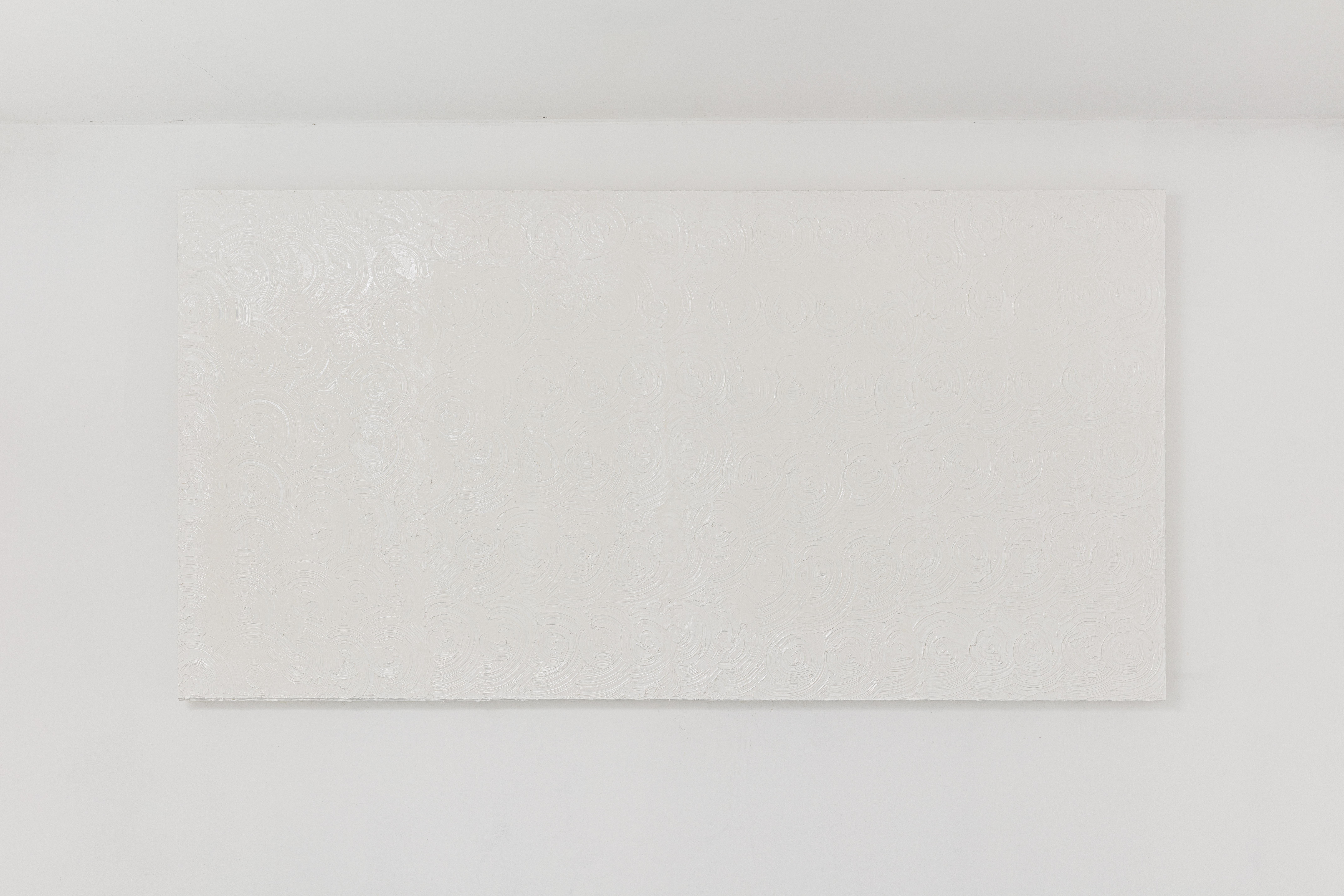 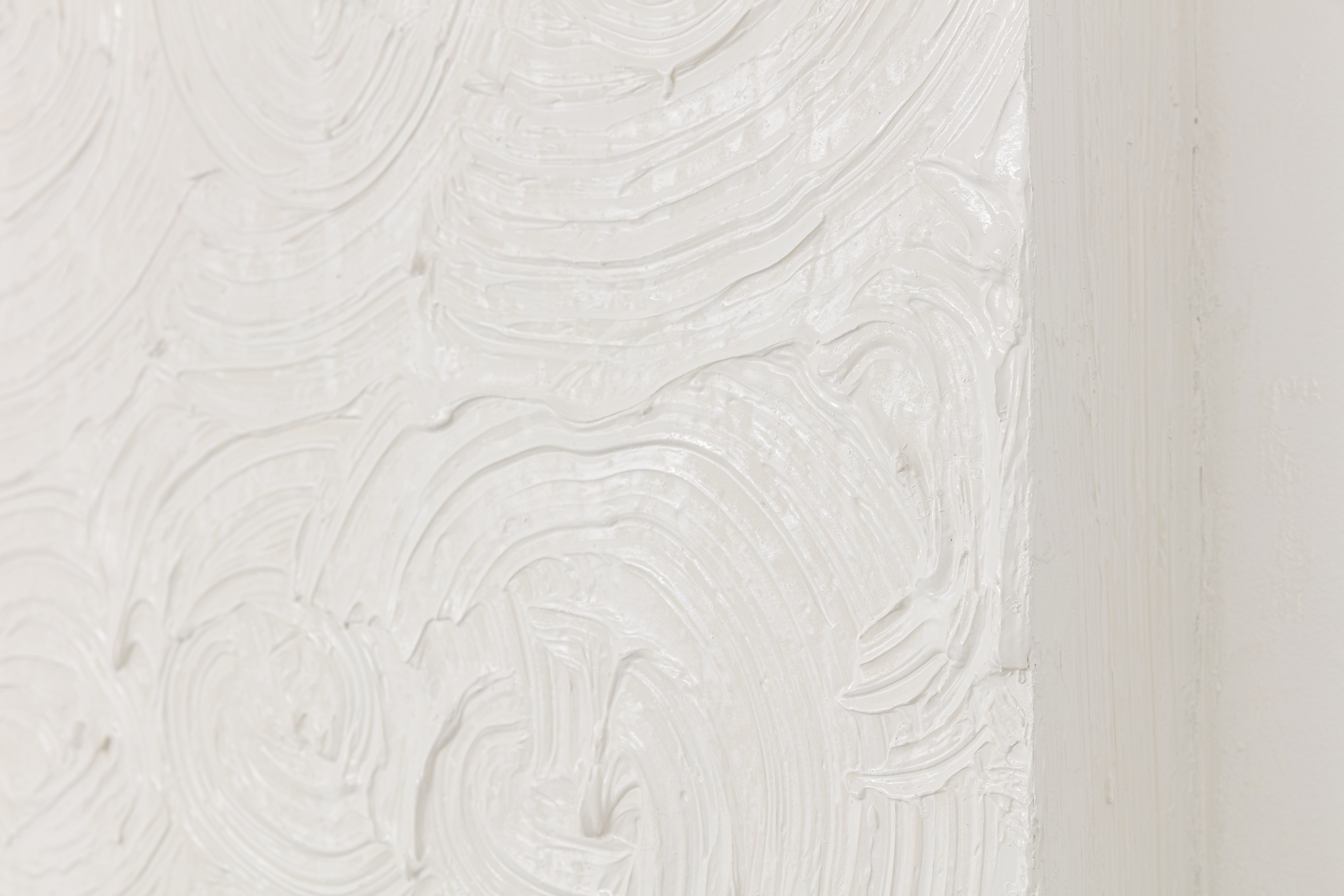 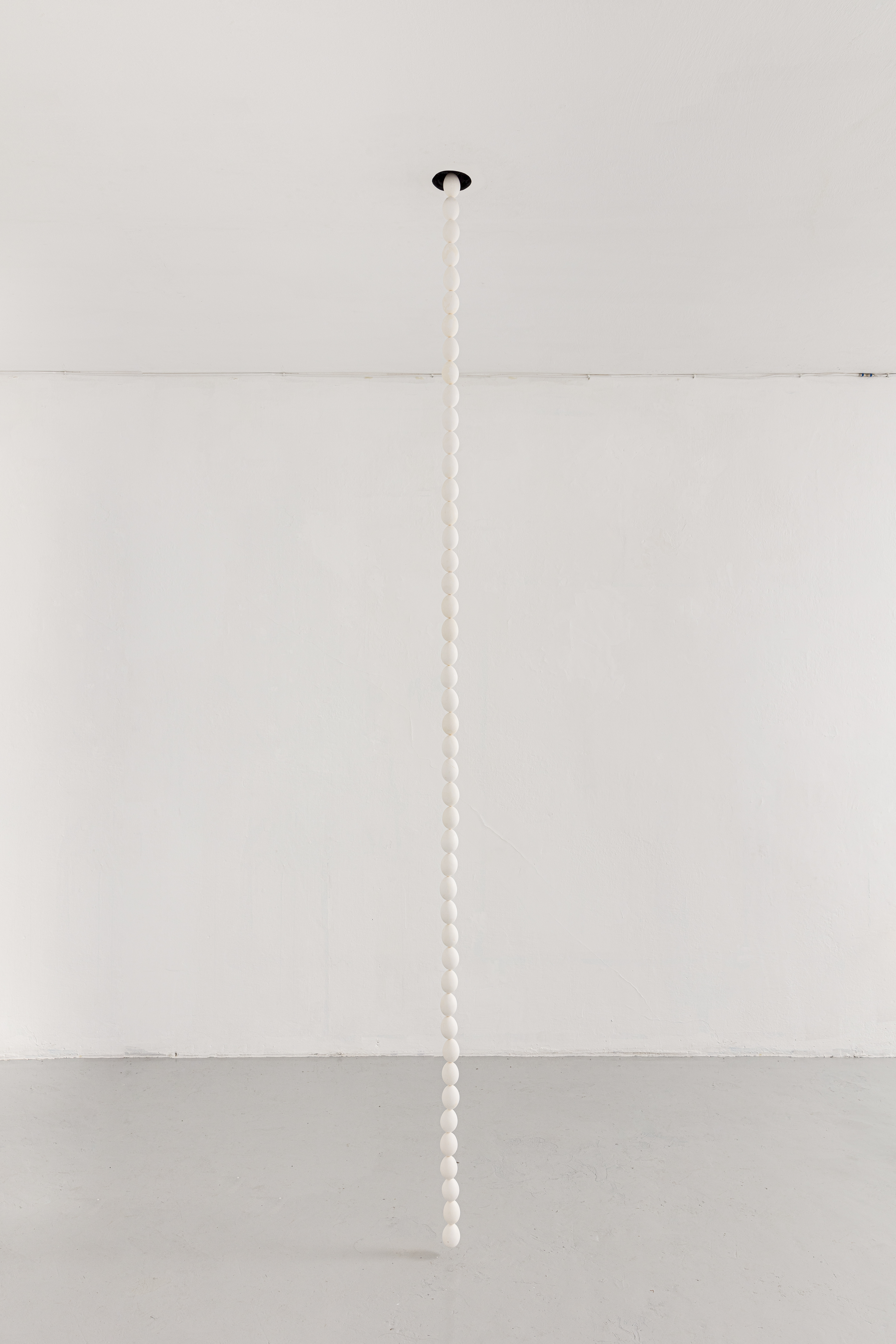 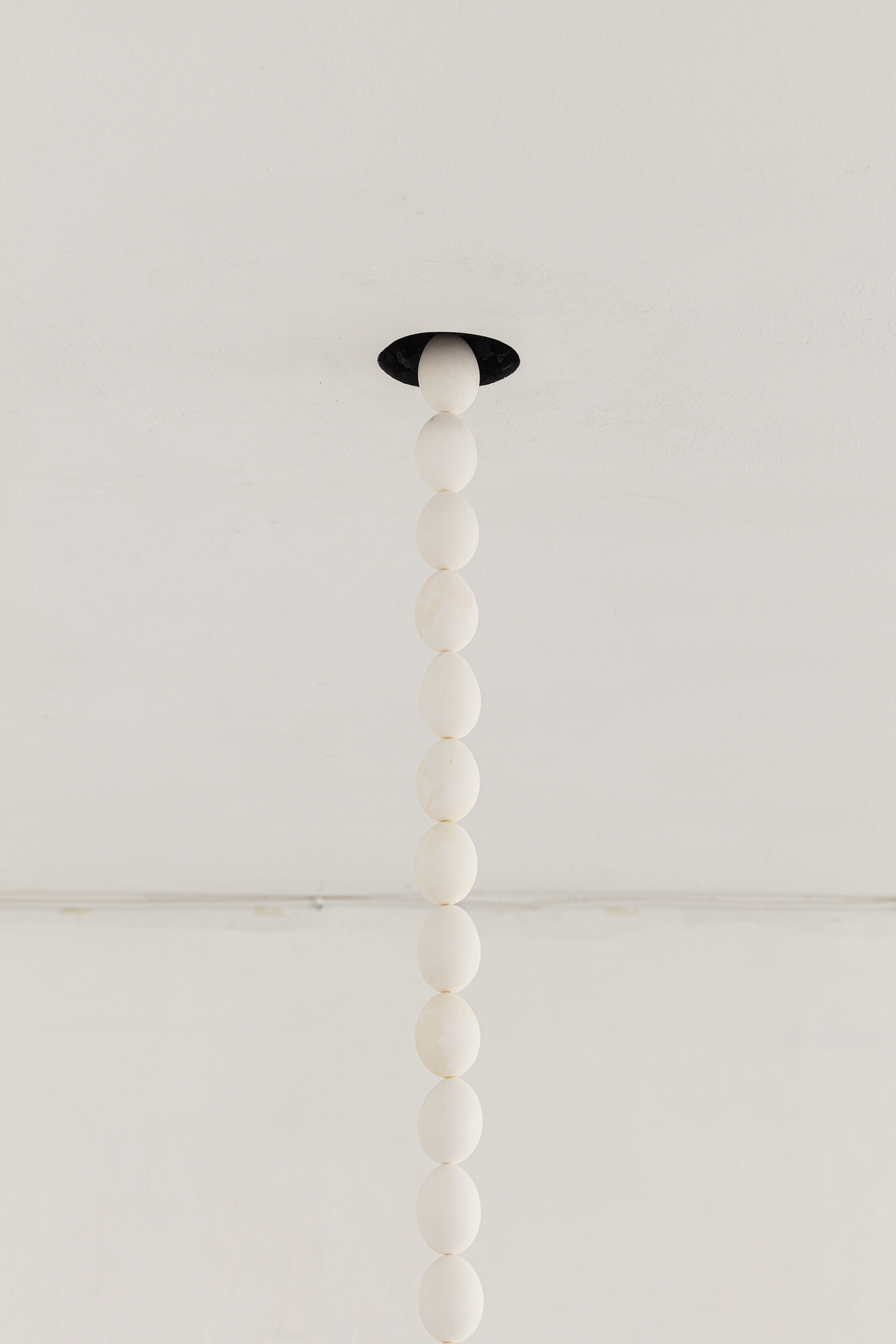 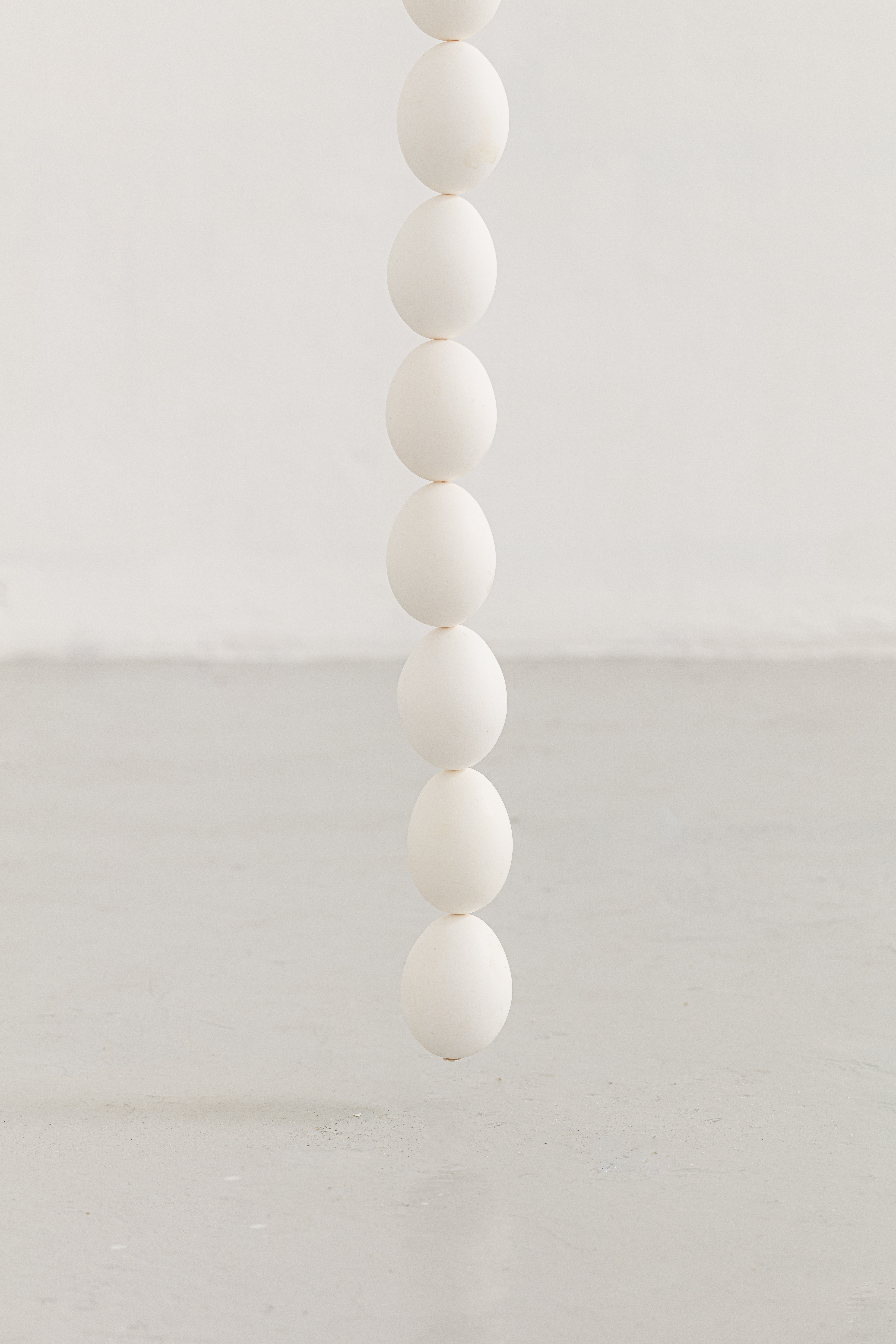 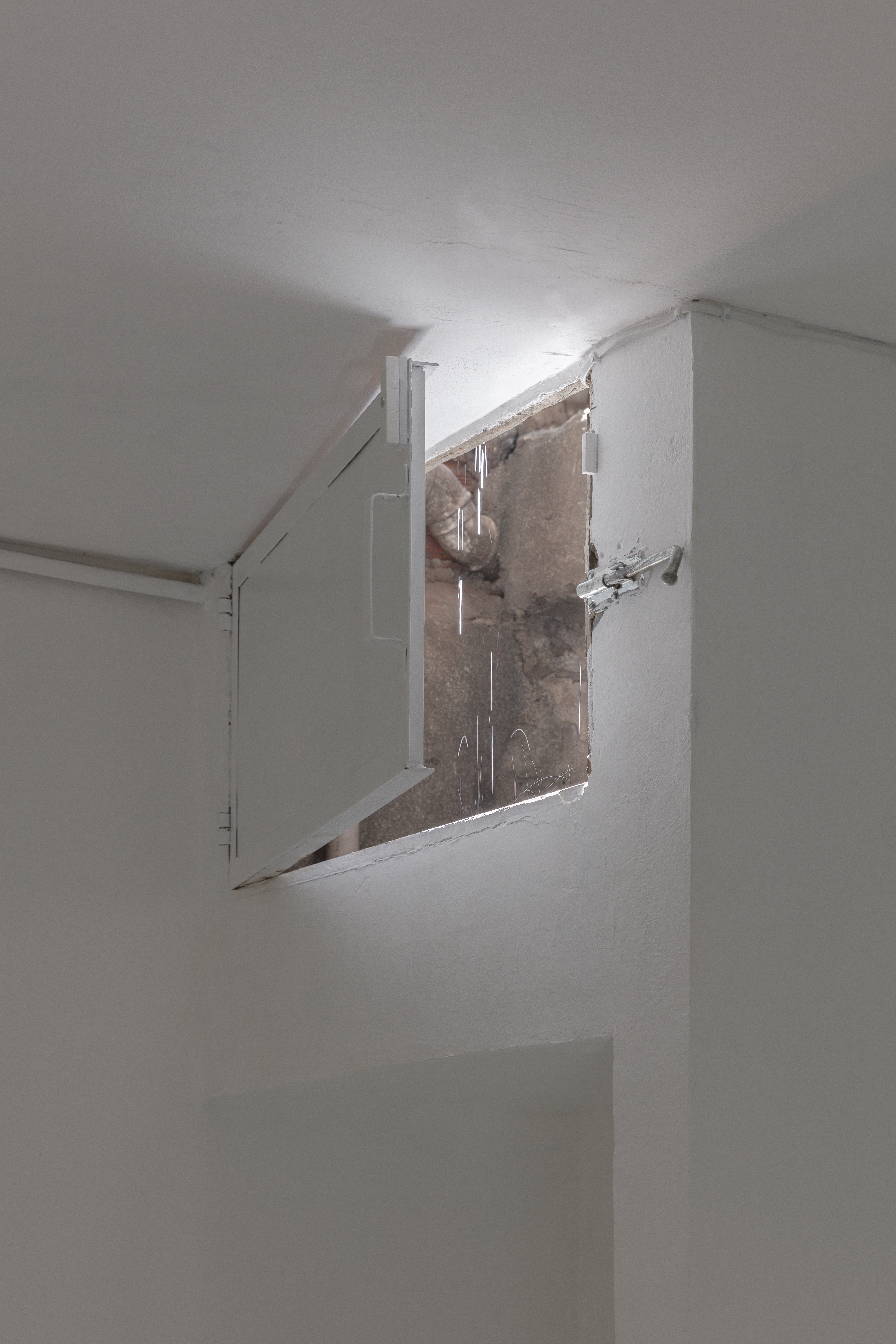 All images courtesy and copyright of the artist and gallery. Photos by Ana Pigosso.

Flora Leite presents ‘Crust’, an exhibition that has its place as a generative element of the works, investigating its holes, coatings and sockets, which are translated by her repertoire of interest in landscape, decoration, and exhibition spaces. The works operate like a crust: shaped closely to the space, hollow in their materiality. Made in the entanglement between the artist's production and the room, 'Crust' generates an exhibition event that is both mimetic and idiosyncratic.

Four works are constructed in the encounter between the artist's production and the room itself, generating an exhibition event both mimetic - in the sense that they establish very intimate relations with the room itself - and idiosyncratic - as they resume particular elements within the artist's research. Mainly made of light hues, the works give room to a very particular atmosphere.

'Flood' lights the exhibition using six symmetrical sockets: luminosity runs from six shells, closely to the glowing, gray floor. Two 'Cloacas' hang from the ceiling, lines of hollowed eggs coming out of its holes. The holes, existing since before the exhibit, are a constitutional condition of the work, thus co-opting the building structure into the work's mechanisms: the building becomes part of it, and from its cloacas eggs are spilled.

In the back of the room, covering the window, we can find 'Coating', a rectangular structure in texturized finishing. Such coating is a common pattern found frequently in domestic decoration, and at the same time its circular drawings in shimmering finishing become cake frosting. The seizing of the window, trough the work, collaborates with the dense and subtle climate of the exhibition, creating a kind of haze.

Works with running water are recurring in the artist's practice: under an awning, over a window, from the inside of an aquarium backdrop. They are part of a repertoire engaging in the presence of natural phenomena and its apparition in exhibition sites, wherein water is also a contemplation motif. Through a slightly opened door, 'Chororô'* drips on a whim, unnoticed by some of those who gaze at the exhibit. Given its precision, some even interpret it as a leak waiting for a plumber. Its murmur is always heard throughout the exhibition.

As such, the works are shaped closely to the space itself and hollow in their materiality, transforming the temporary space through an attitude of installation, which in its specificity guides the spectator in examining not only that which is visible through the eyes, but also the decisions and procedures that lead these works to present themselves - to the eyes - exactly as they are. Puddles of light, puddles of water. Rain that doesn't touch the ground. Covered window. Eggs coming out of holes. Works that all all encrusted into the space, made wherein the artist's production meets the room, such as a Crust.

Leite invited the artist Wallace Masuko to create a graphic dialogue for the exhibition. The artist made a series of 5 postcards, one for the exhibit as a whole and one for each work. The postcards invite us to imagine the exhibition as a place from which we take souvenirs when visiting, carrying a memory or sharing the visit with those who weren't there. On their backs, the artist inscribes notes, drawings, images that dialogue with each work, not only in subject but also in their conception: fullness in that which seems empty, precise in that which seems loose.

*Chororô is a Portuguese word used as a synonym of crying in a soft manner, specially in inadequate situations.

Flora Leite (b. 1988, São Paulo) is an artist and researcher. Her work moves through both independent and institutional spaces, where she proposes installations, texts and debates. Flora develops strategies to investigate the materiality of the world and her own field of work. By asking what (hi)stories and fictions do objects and spaces carry, Leite produces subterfuges of observation and the negotiation of meaning, in art spaces and out of them.

Leite is finishing her Master's degree in Visual Artes at the University of São Paulo. She has held solo shows in institutions such as Centro Cultural São Paulo (2011) and Oficina Cultural Oswald de Andrade (2017), besides commissioned projects for aarea.co (2018), arte_passagem (2019) and Casa de Cultura do Parque (2020). Leite has participated in group exhibits at spaces like Olhão (2019), Espacio de Arte Contemporáneo (2017) Caixa Cultural - RJ (2015), SESC-SP (2015), and Instituto Cervantes (2012), besides other art spaces and galleries.

The exhibition is held at GDA Galeria de Artistas, the initiative of four artists proposing self-representation and temporary representation of young brazilians. Besides being a gallery, GDA is a platform for circulating and presenting artworks, making them viable, besides positioning itself actively within the financial, legal and market issues of brazilian contemporary art.