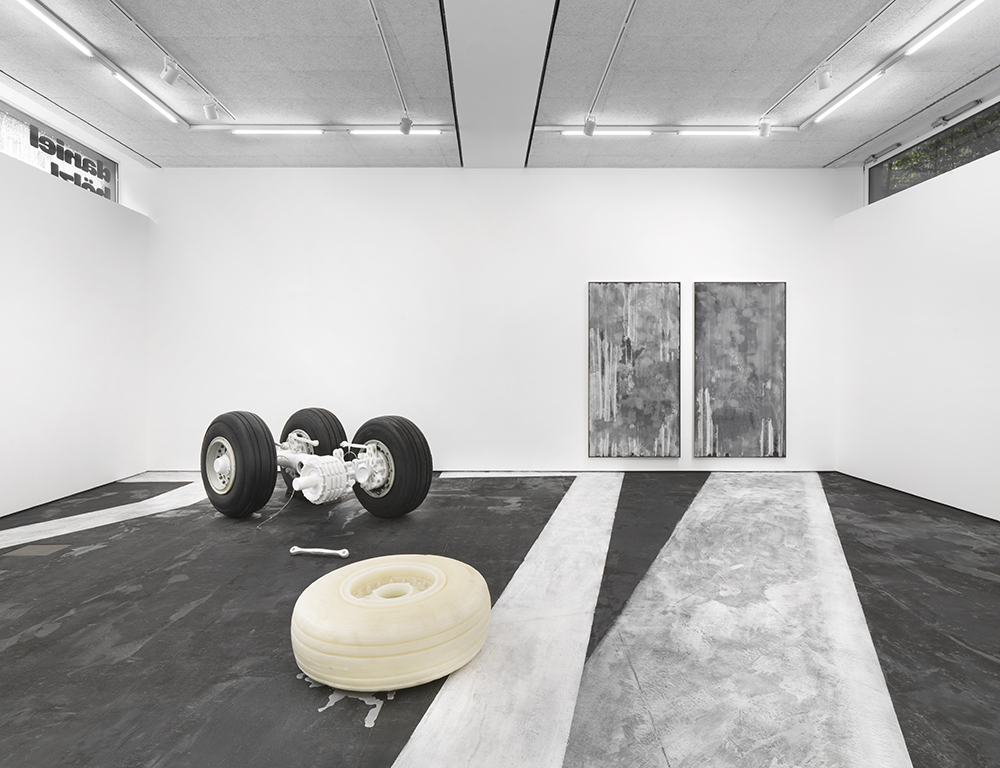 The nose of a plane bares down on the entering visitors; stripped of its wings, it appears as a silvery shark out of the blue. It is a dramatic start to Daniel Hölzl’s first solo exhibition, GROUNDED at DITTRICH & SCHLECHTRIEM. Mainly working with site-specific installation, Hölzl piqued Berlin’s interest with his presentation of exposed interior spaces in AUSHANG for 48 hours Neuköln, 2021, and BAIT during Berlin Art Week, 2021. In each instance, a room was precisely measured to enable a replica to be constructed from parachute fabric. Once sewn together, it was inflated out of a window like an enormous room-shaped balloon, illustrating the architectural volume of the corresponding space. While these works float with the lightness of air, the current series on display questions what and who stays grounded. The title of the exhibition derives from the aeronautic community. A term used when a plane has reached the end of its life or is forbidden to take off. Hölzl is interested in the life cycle of materials and their transformation after the death of their current use. The concept is mirrored in the first piece, the gutted fuselage of the DA42-VI aircraft, named END-OF LIFE cycle one (2022). Diagonally suspended from the back wall, the aircraft guides you down the stairs onto the tarmac for END-OF-LIFE cycle two (2022). The flooring is a direct replica of the runway at the former inner-city Templehof Airport turned park. During the blockade of Berlin, planes were said to be landing every 90 seconds to deliver vital supplies to those cut off in the West. Constructed from 100% recycled carbon fibre imprinted with paraffin wax, the surface is rigid under foot and carpets the entirety of the downstairs. The black carbon peers through the white wax, producing an impressive simulacrum of the well-worn landing strip. 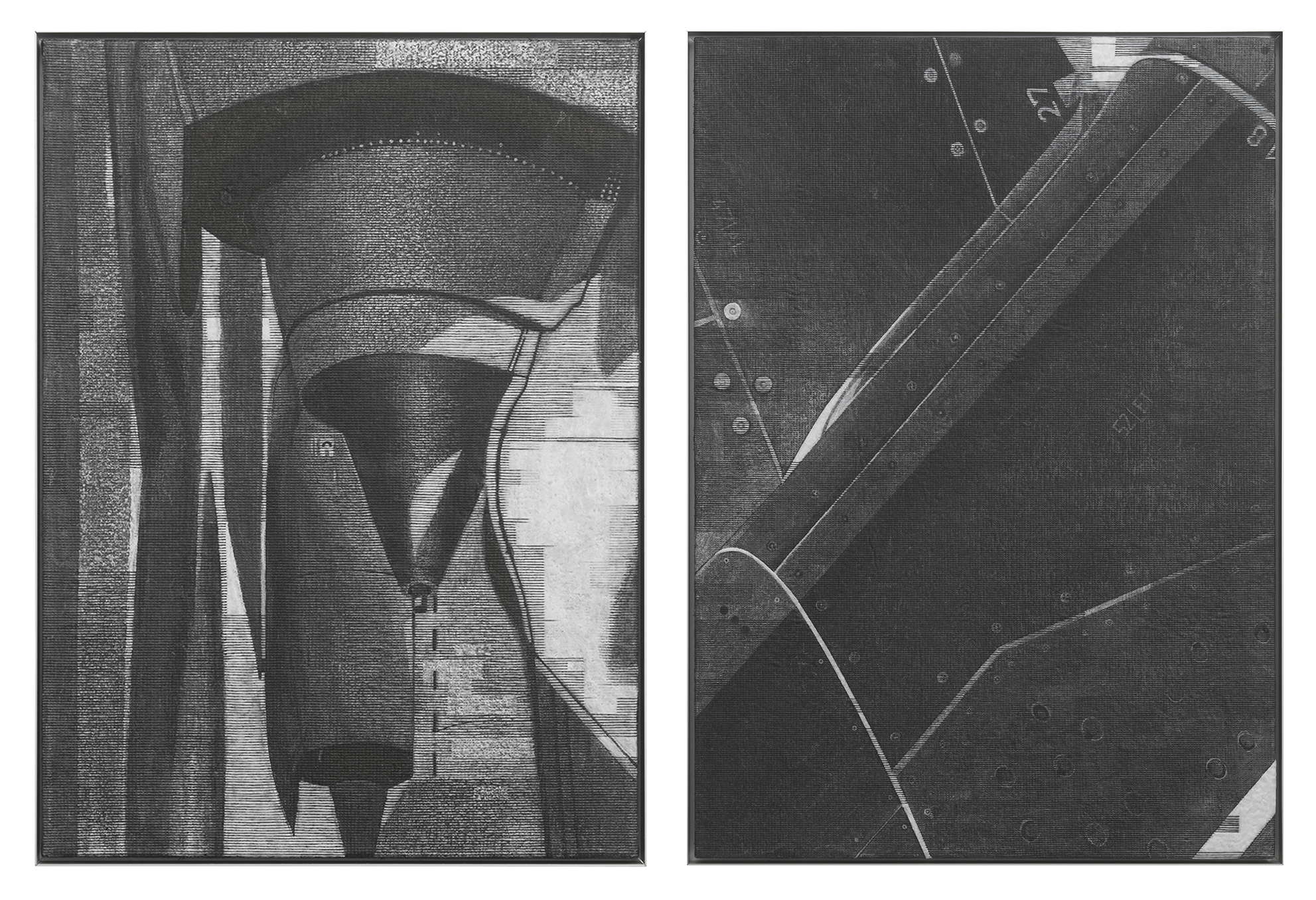 On the walls hang separate series of works, repeating the same materials but with vastly different effects. Some have the appearance of intricate drawings depicting industrial machinery created using a complex process of layering the wax and then stripping it away. The effect produces subtle gradients of grey, picturing metal sheets bolted and riveted together in a patchwork. GROUNDED TARMAC NO. ONE and NO. TWO (2022) are more like abstract paintings with the molten wax of recycled candles impregnating the ridged surface of the carbon fibre in drips and pools. Imprints of tire tracks trace across the work as the wax cracks like ice. A smaller series cuts sections from the ground, taking the proportions from aeroplane windows and spacing them at identical intervals. This sequence is frankly titled GROUNDED WINDOW NO. ONE through to NO. EIGHT (2022). Every detail in the exhibition is purposeful and sets the stage for the viewer to ponder this complex industry that is, on the one hand, vital in contemporary society and, on the other becoming increasingly problematic. 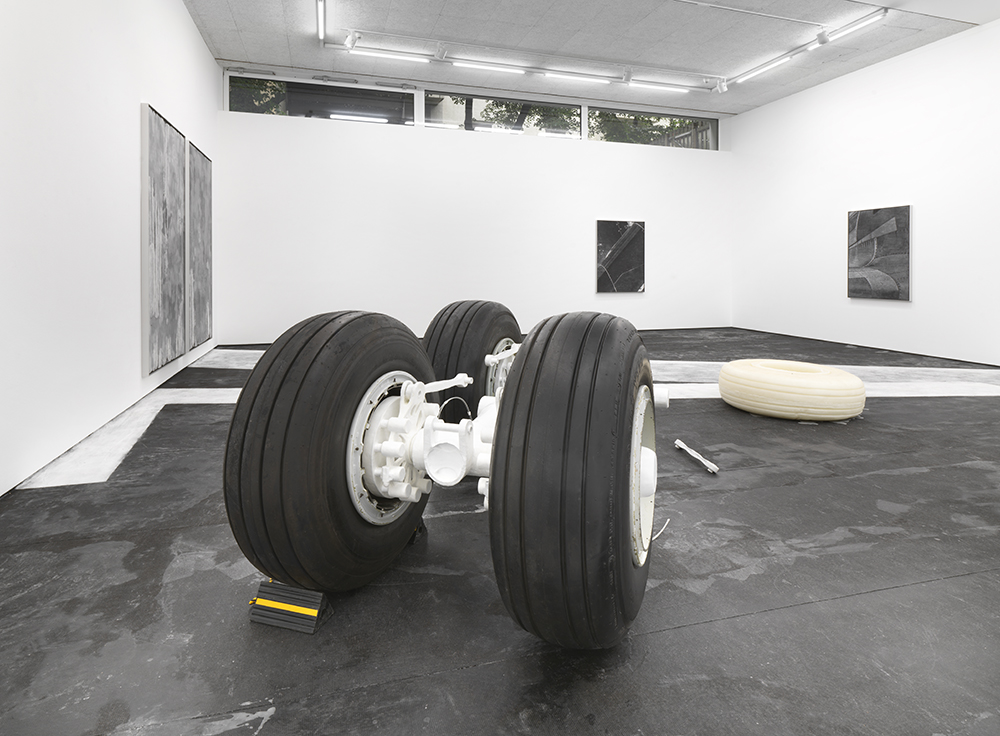 In the second room rests the landing gear of an Airbus A300. Three tires remain in place while the fourth lies nearby, sculpted from paraffin wax, ghostly white compared to its counterparts. Under the Berlin sun, the space warms, and the ephemeral material melts with the help of a heating panel, slowly spilling onto the floor. It seems unfathomable that these four points of contact can carry 250 people, 170 tonnes at a speed of 270km per hour to the safety of the ground. Aviation is an industry where alternative materials are hard to come by. The rubber of the tires, for instance, cannot be synthetic. It must be produced from the sap tapped from rubber trees, where a white latex drips from incisions in the bark - referred to as the devil’s milk due to the history of exploitation of people and the environment in its extraction. The tire in GROUNDED seems to be regressing to its initial form of a silky translucent liquid. The dependence on unstainable materials is repeatedly emphasised in the use of carbon fibre and paraffin wax which seep into all aspects of this exhibition. These revolutionary substances enable aviation to be what it is today as planes are lighter and more streamlined thanks to carbon fibre, and petroleum containing paraffin produces jet fuel, playing a crucial role in globalisation. 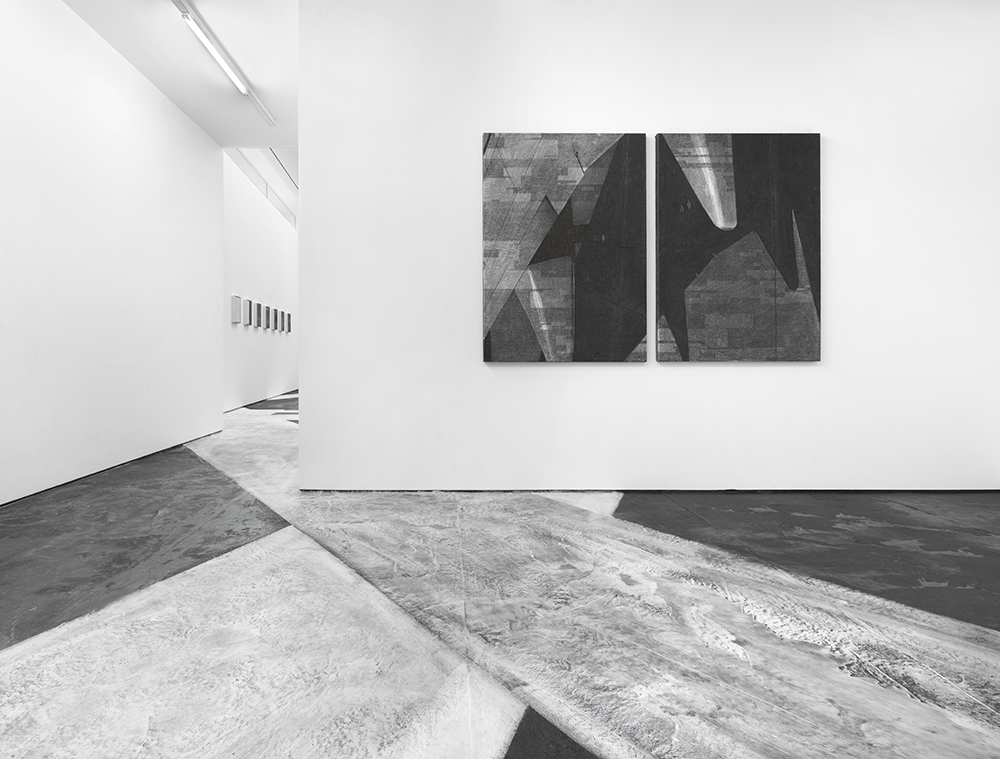 The show is deeply conceptual but does not rely on the press release, as the work speaks for itself. Too often in contemporary art, the stretch between the written words and visual outcome can only be reached by a leap of faith, misguided faith. Instead, the exhibition is accompanied by an essay by artist/curator/critic Mohammad Salemy who creates food for thought for those that want to dive a little deeper and understand the broader context of issues that arise from the pieces. All aspects of the show feel intentional. At no point does Hölzl veer into the decorative. Yet, with this unostentatious approach, the exhibition remains impressive and enticing. 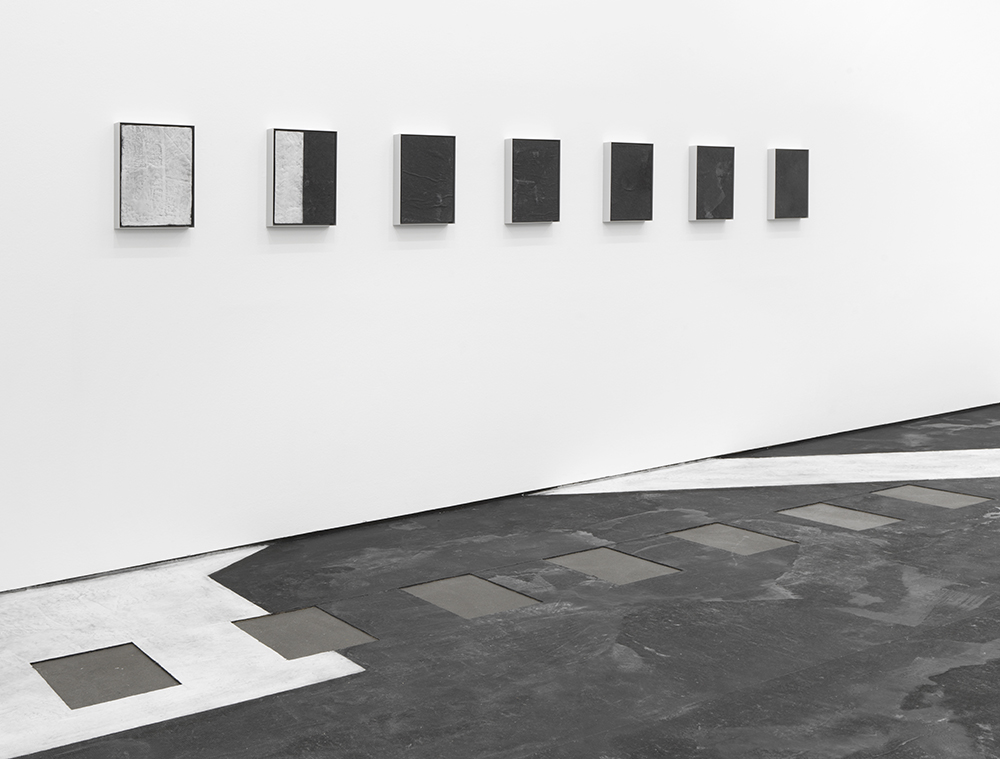 Anna Ratcliffe is a Berlin-based art historian who curates and writes.