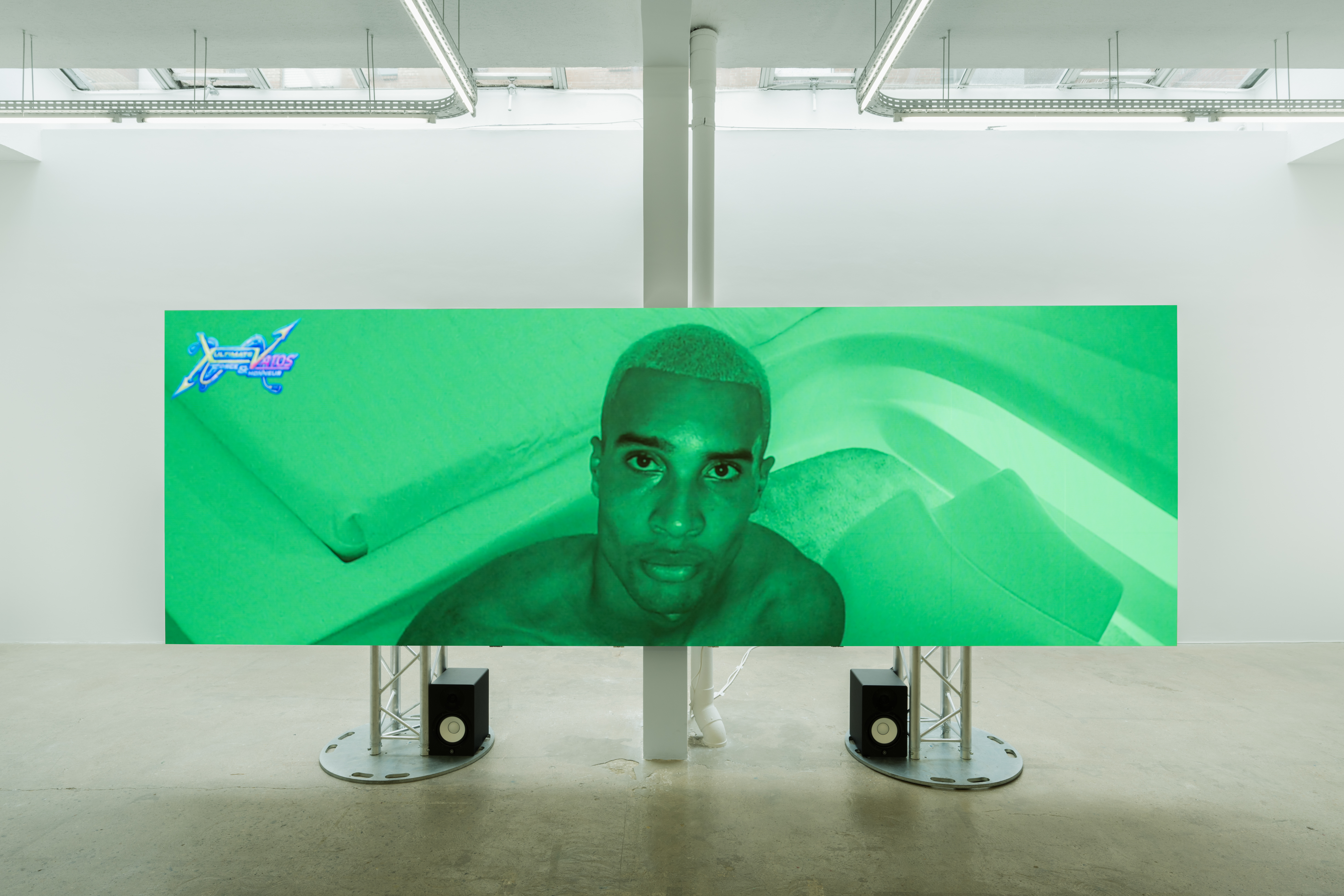 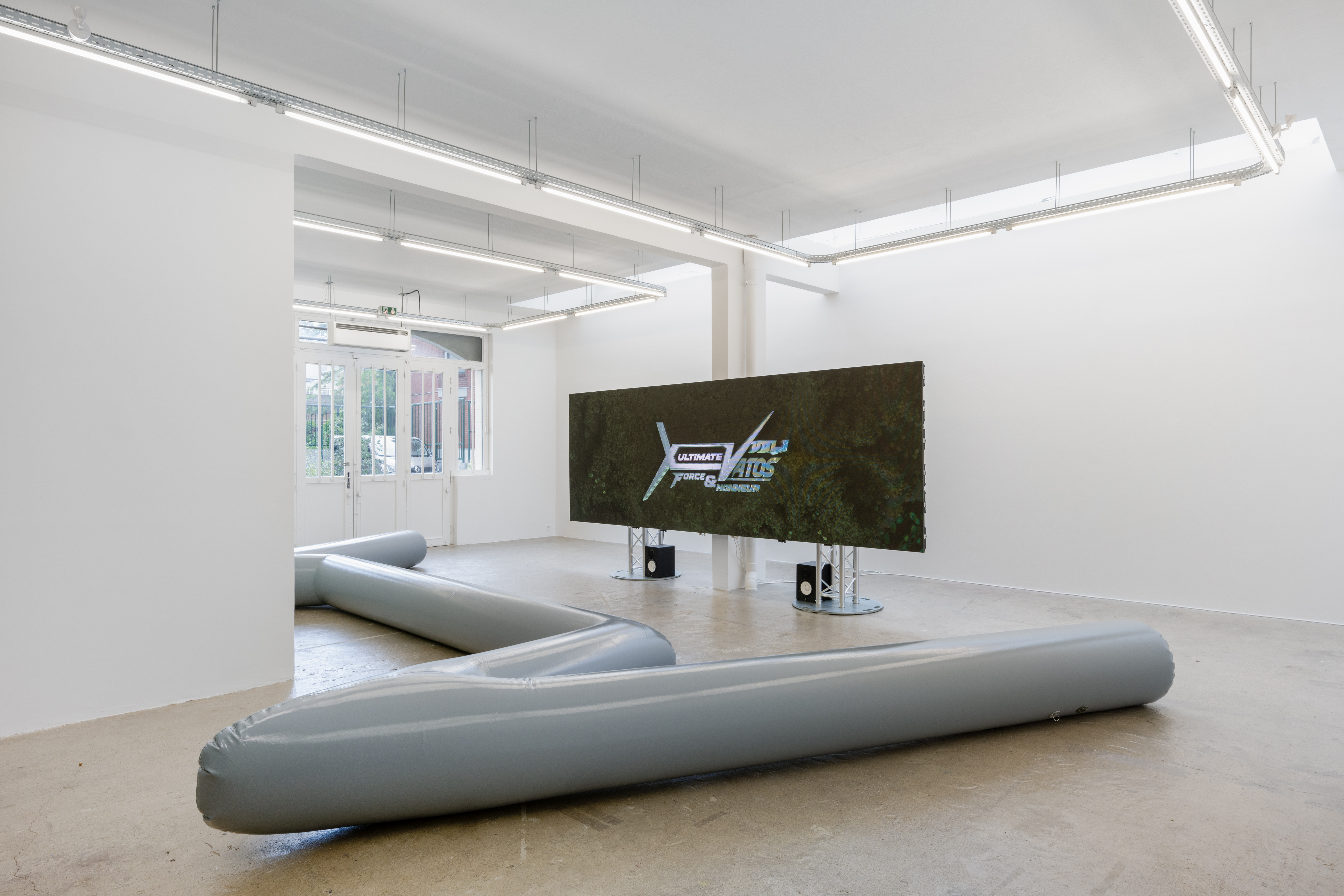 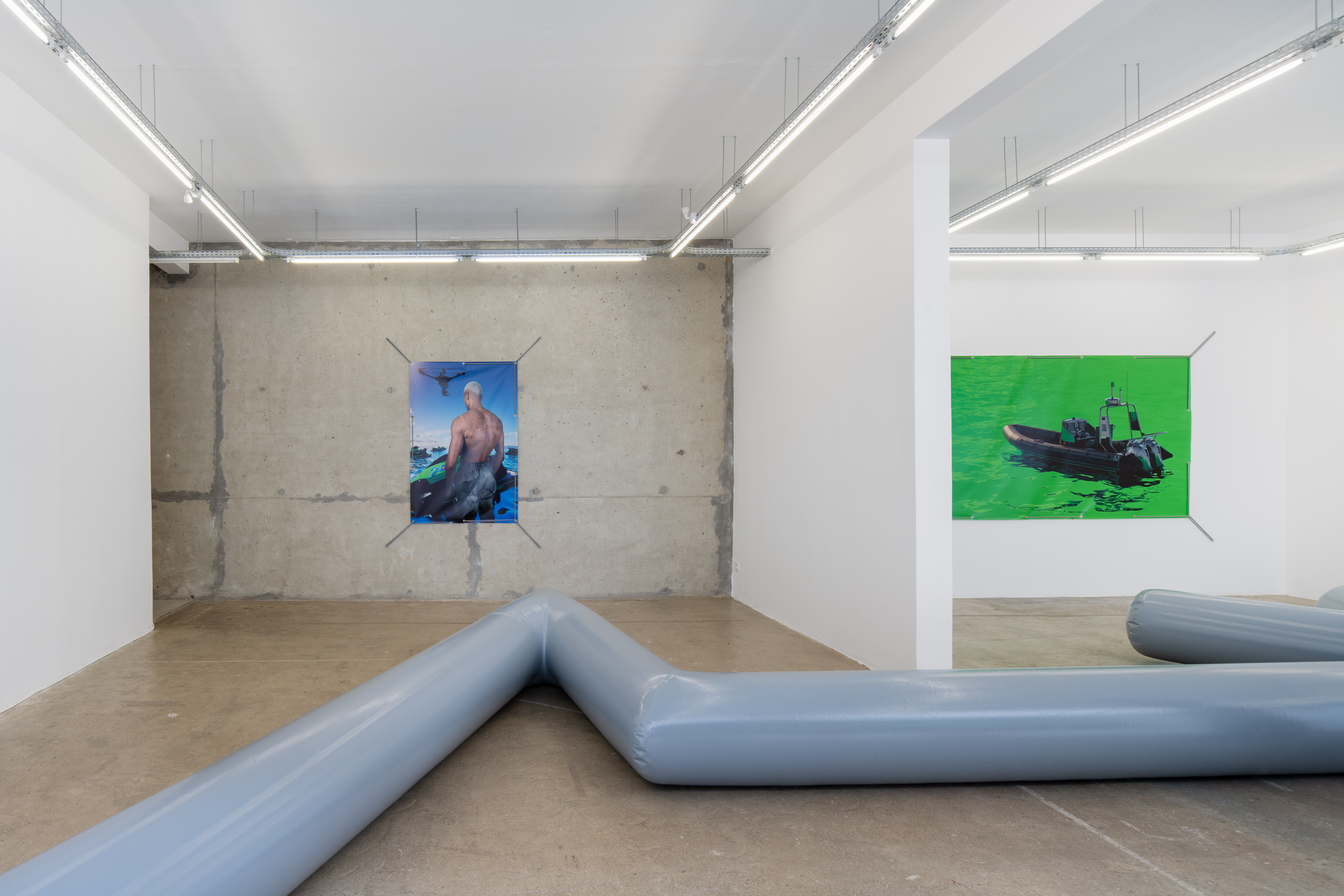 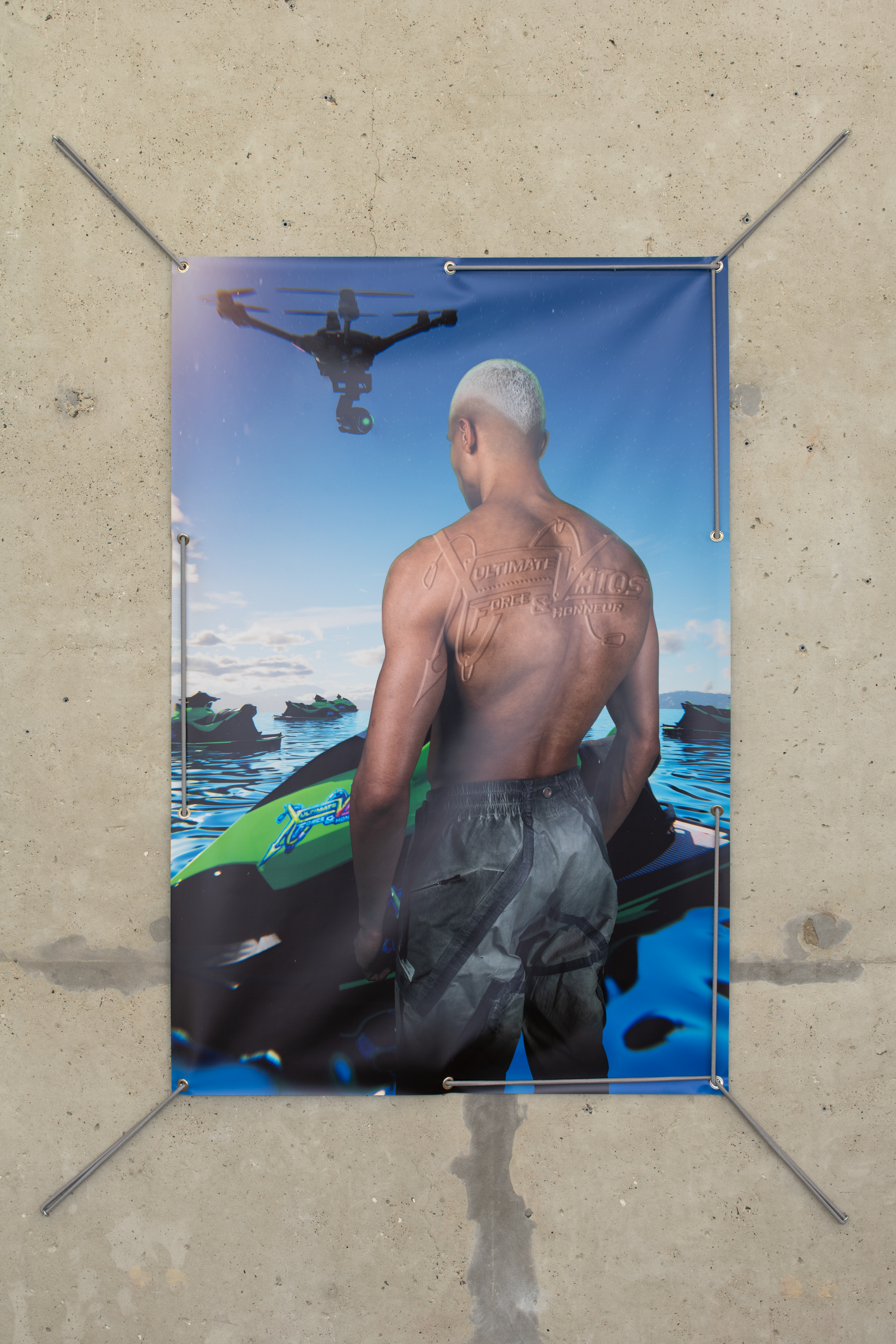 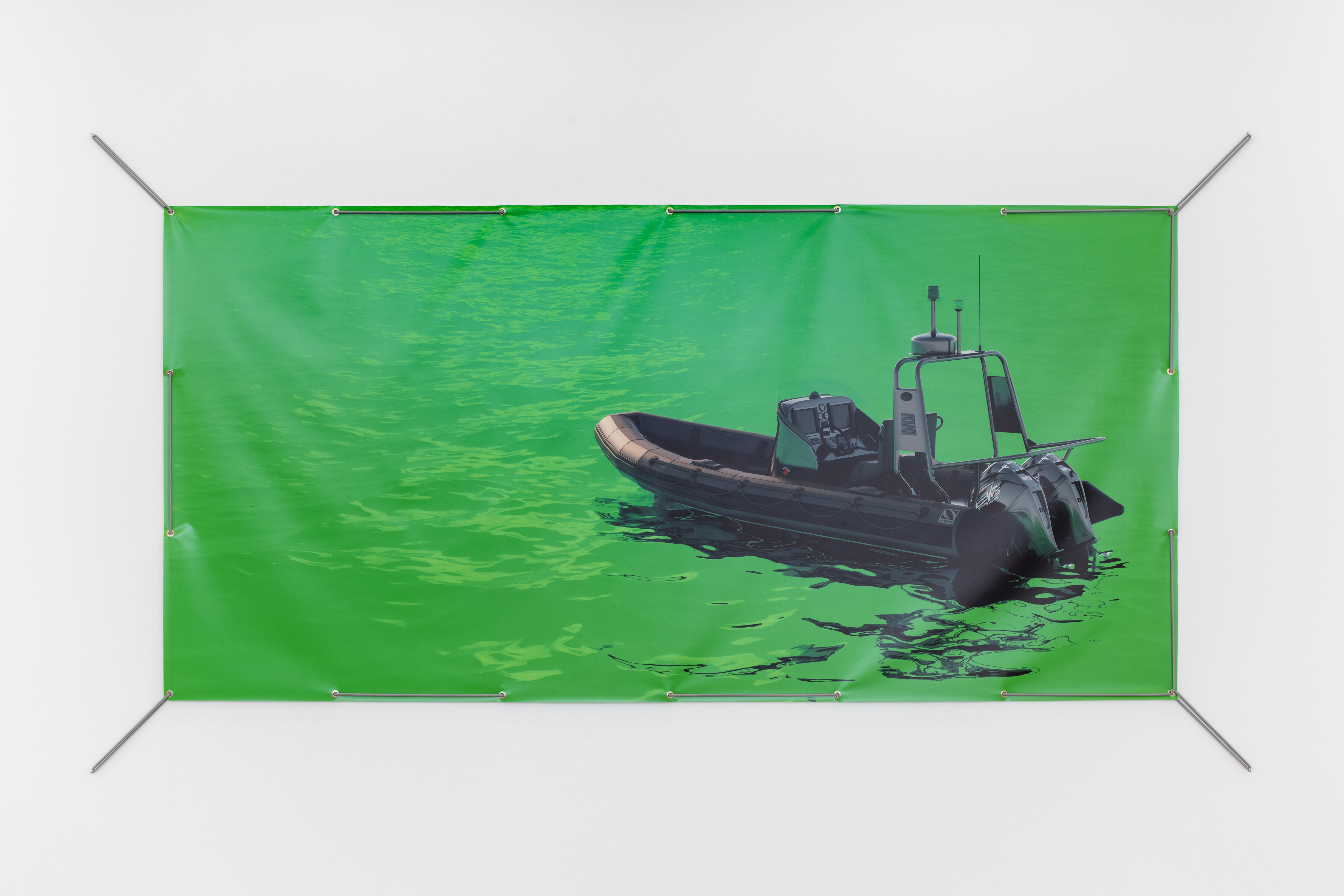 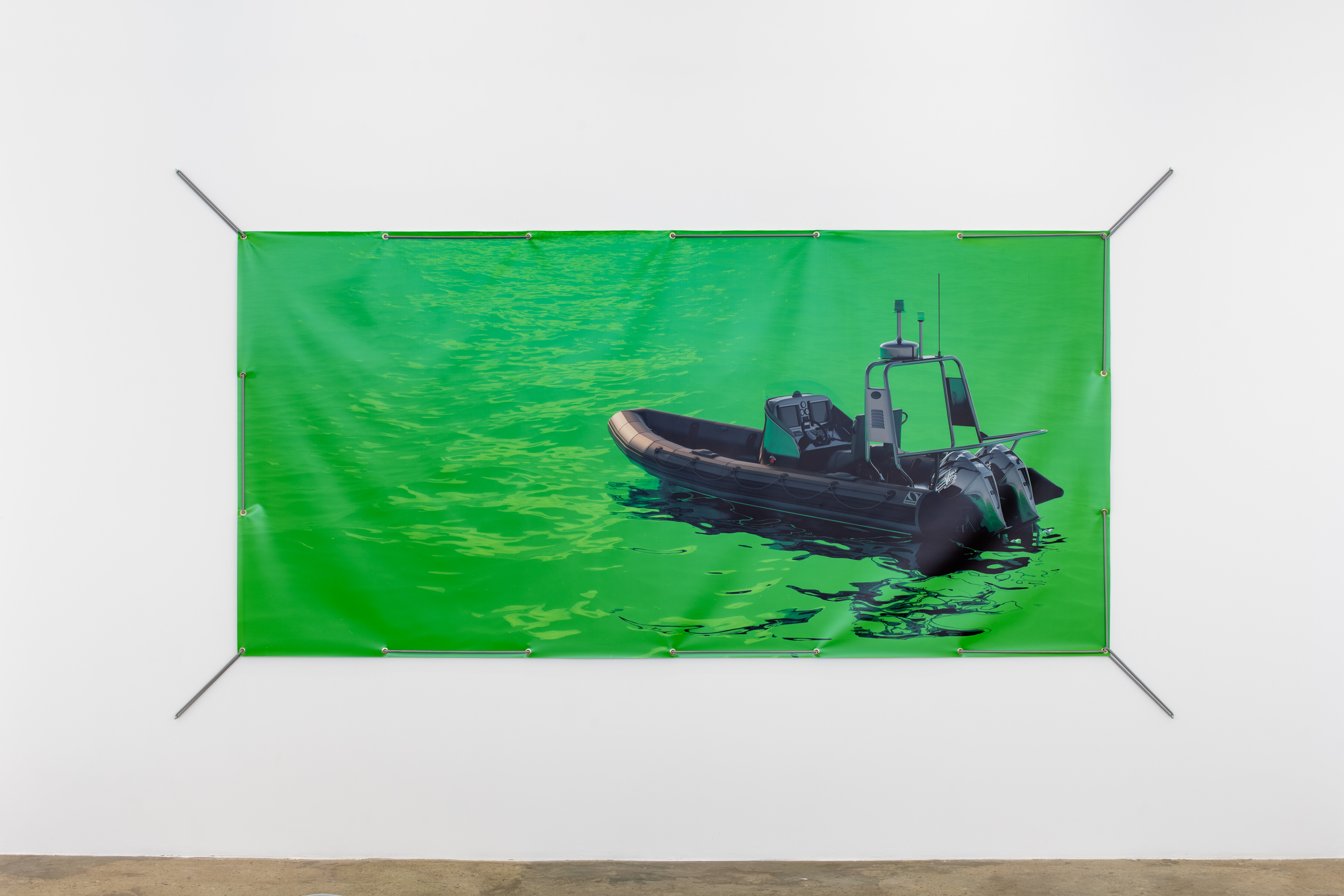 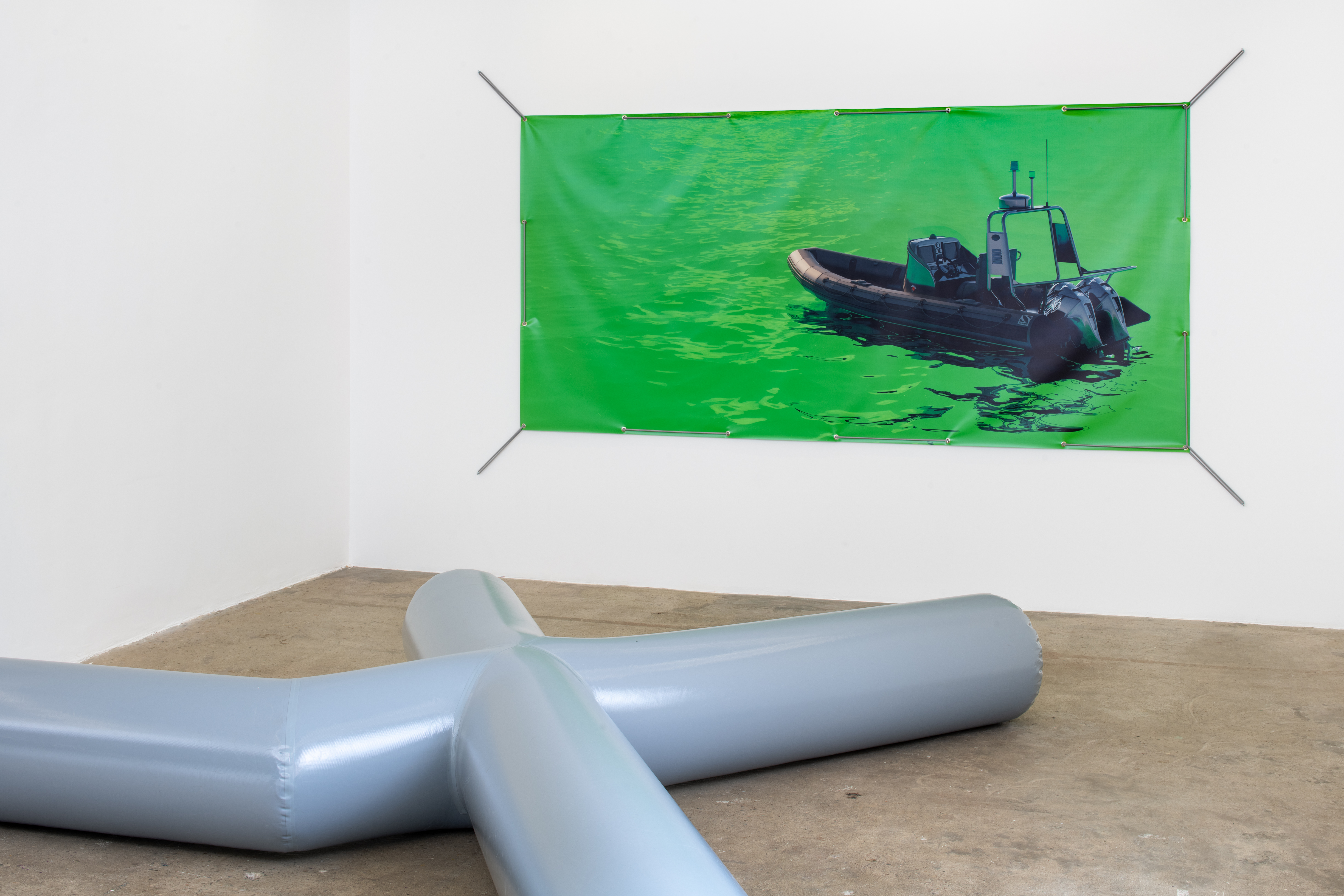 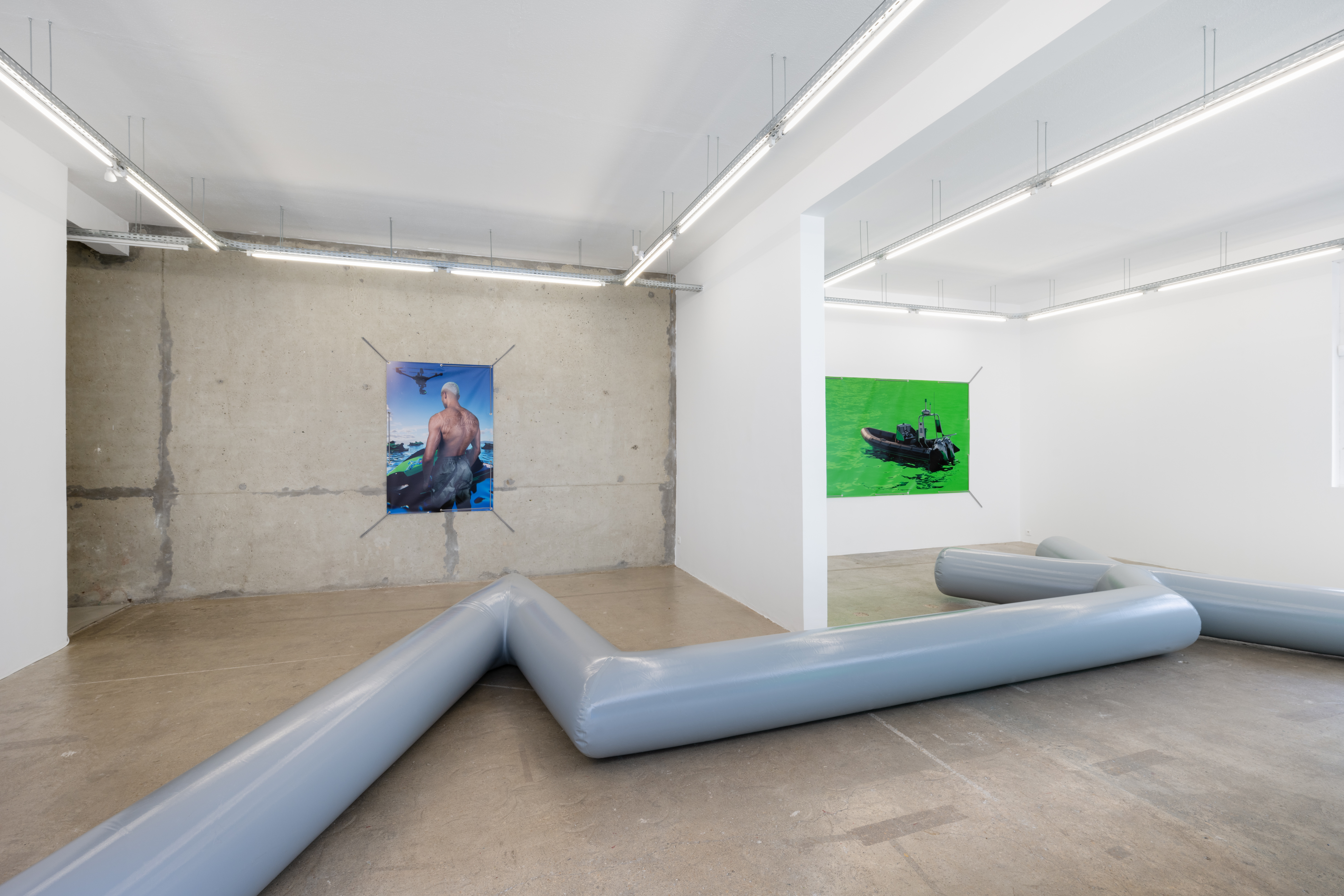 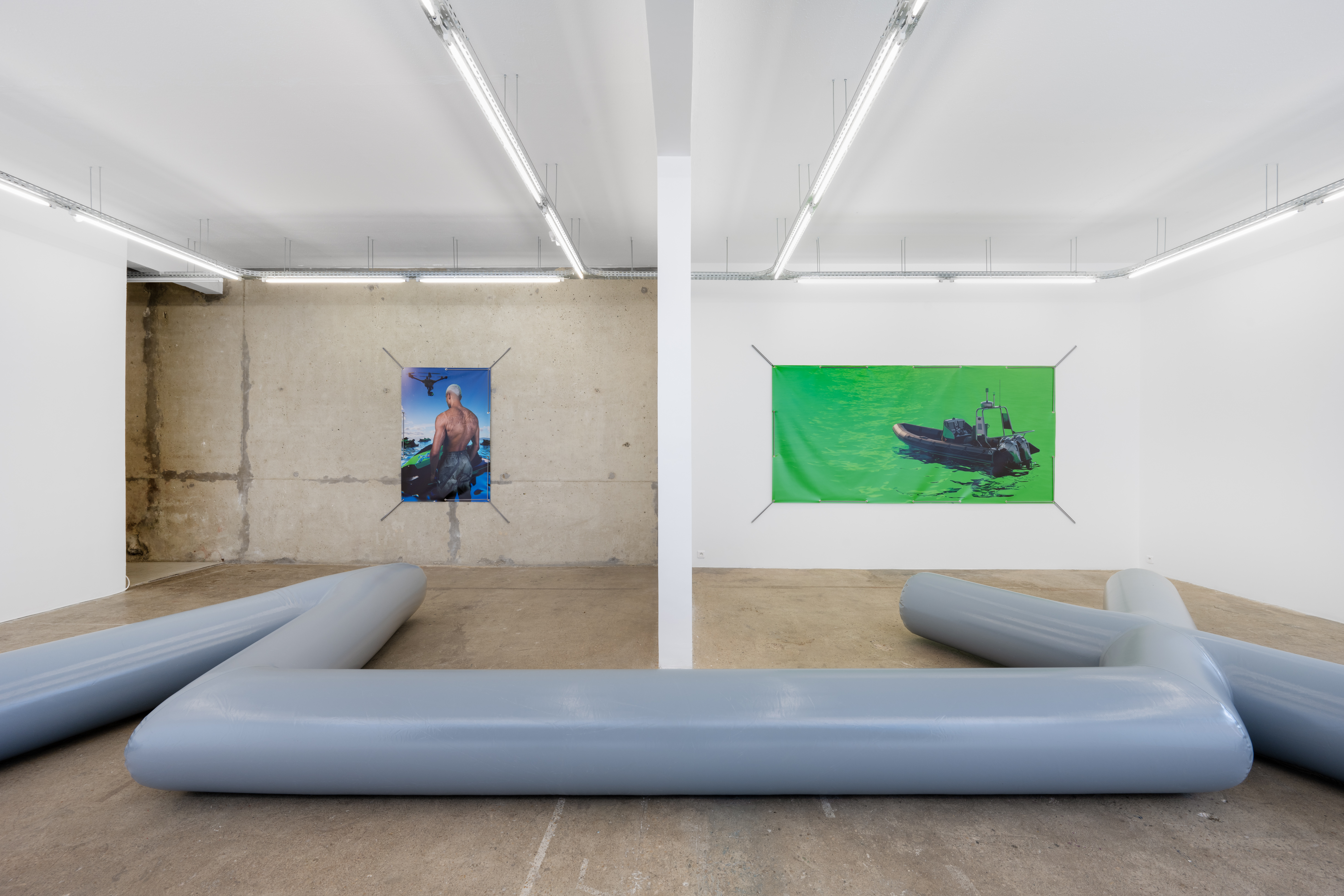 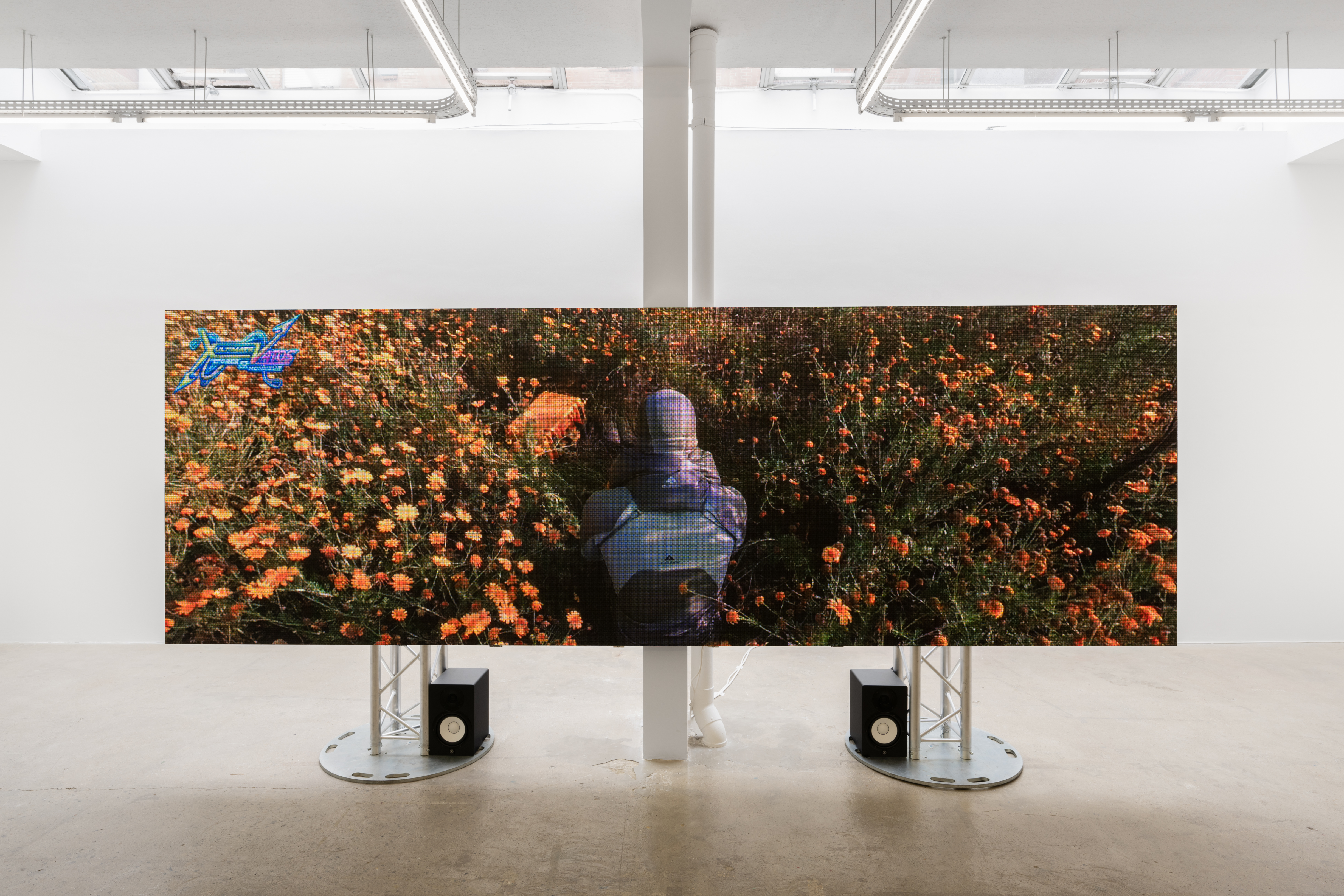 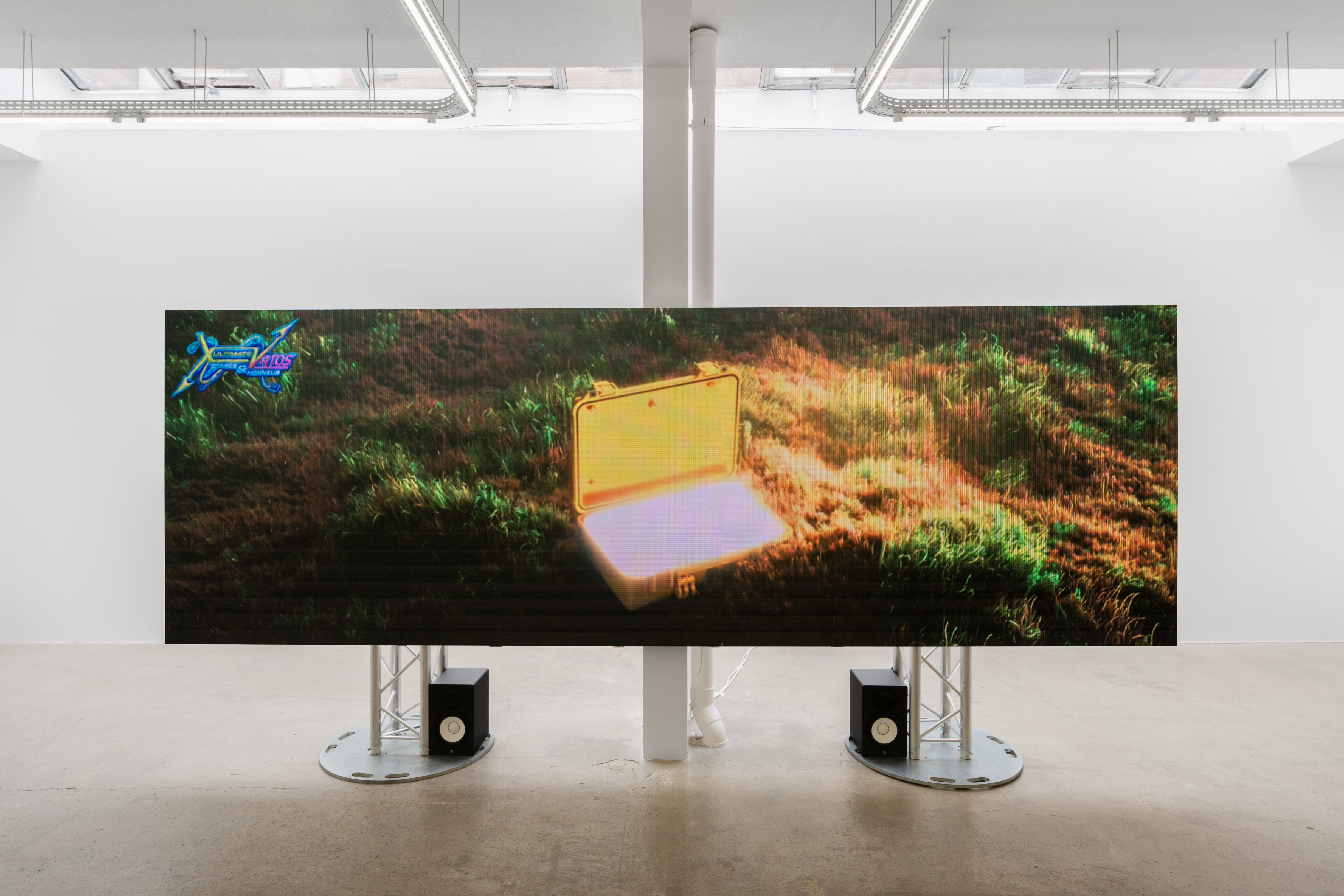 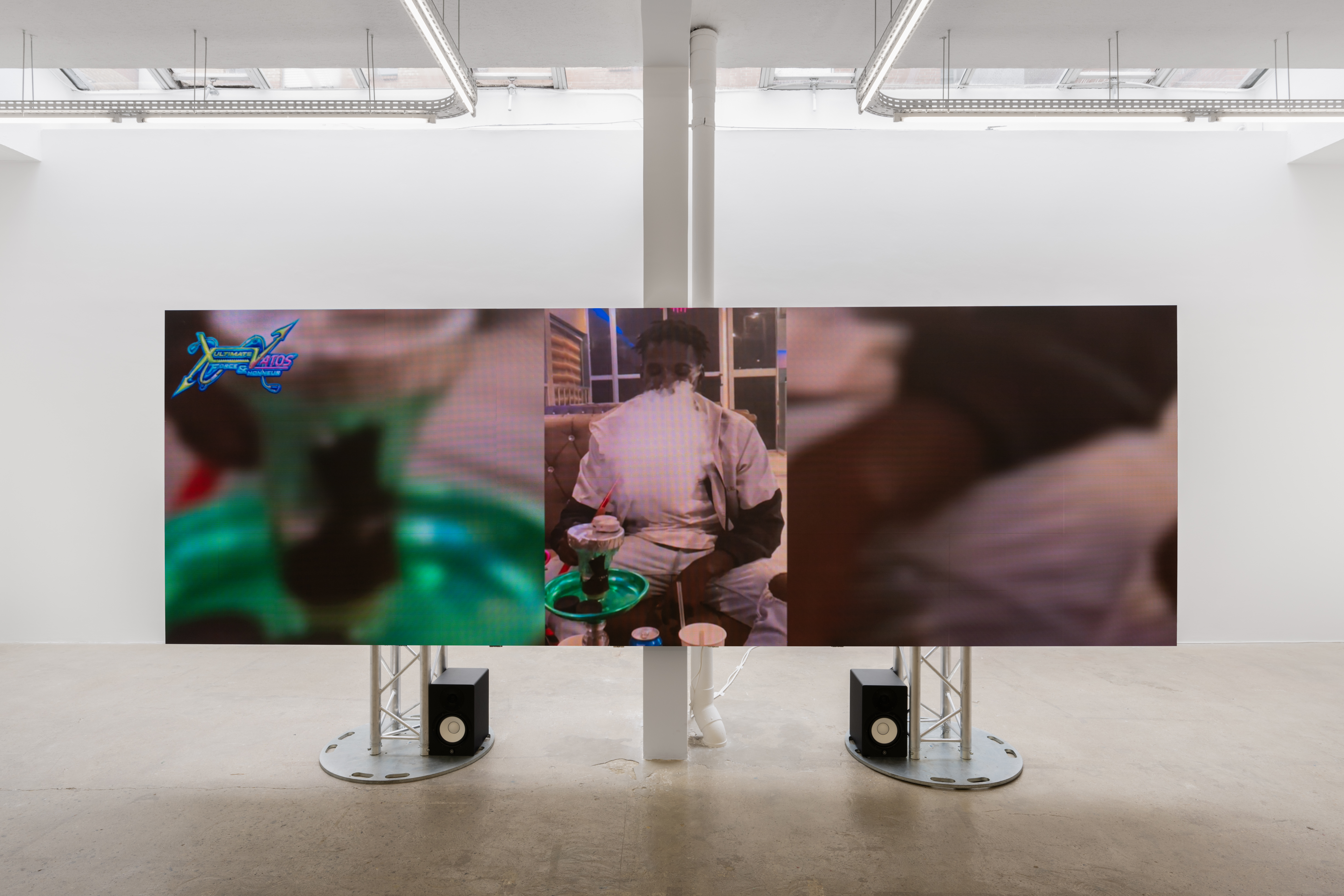 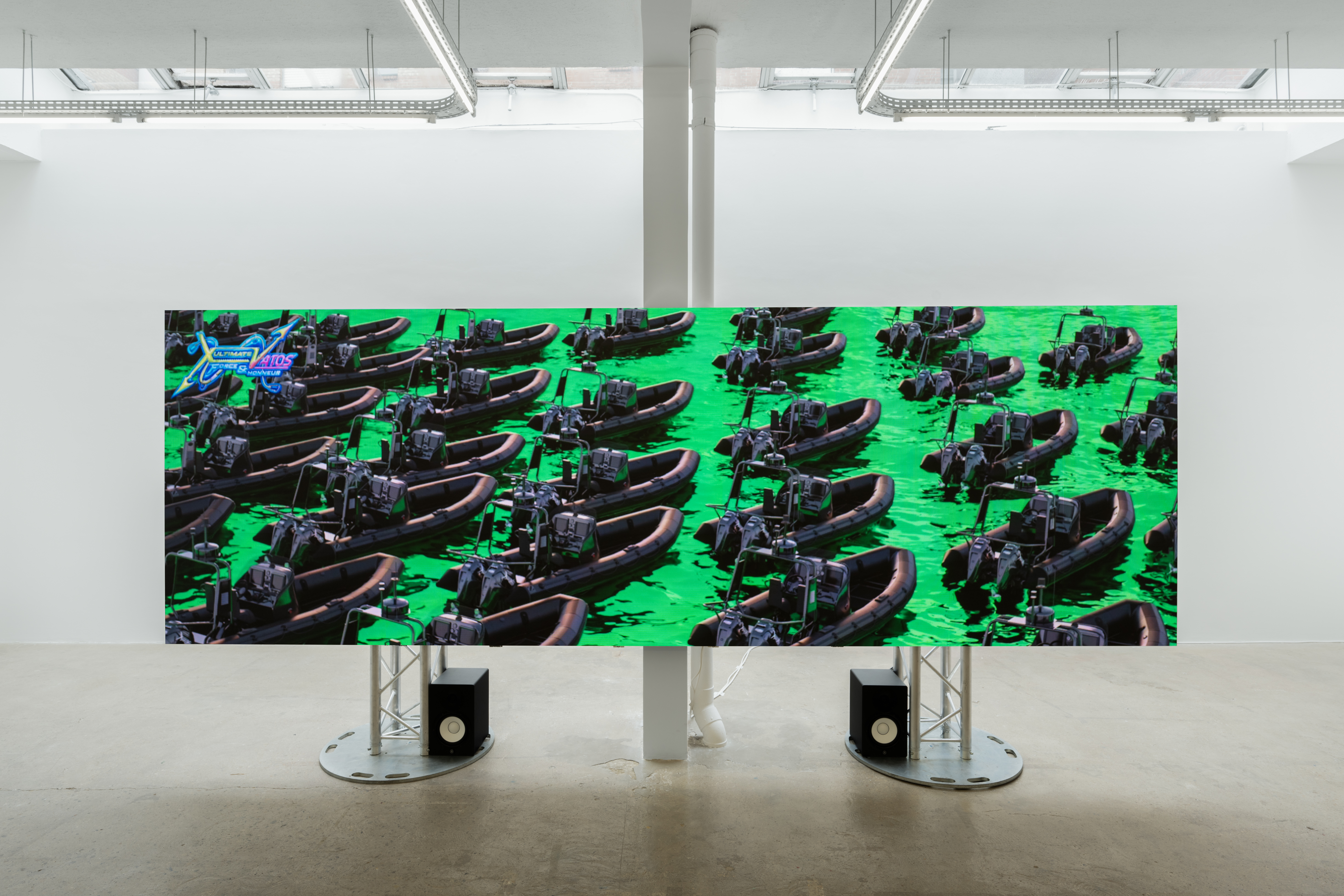 For this first exhibition at the Galerie Crèvecoeur, the film being shown, Ultimate Vatos,
brings together video sequences from several different sources (outdoor shots, indoor shots
like telemonitoring, 3D images...) and borrowings, which creates a combination of various
aesthetics/dynamics of moving pictures. Can you define what guided your choices of images?
How did you conceive the exhibition’s visual environment?
The important point in the creation of this film was to develop a combination of
images that provided the possibility to blur the frontier between the real and the
virtual. For the outdoor sequences, the film was entirely shot with onboard cameras,
thus adding the effect of CGI and of video games, both from the positioning of the
cameras, and the angles, but also the glitches this led to, like bugs reminiscent of
the effect of constructing environments in video games, as the characters move. The
process entailed using only this type of cameras, while playing with them until the
effect I wanted was obtained, to such an extent that you wonder how certain shots
were created or filmed. There are also some videos from social media in the new
film, as in all my work. This is a material that I use above all to add a documentary
dimension to fiction, and to give depth to the characters through images taken from
their real lives.
The film features a single character in a world which is both closed and isolated, where the
sole reference point is a highly demanding competition. In this film, as in previous ones,
the question of an individual identity being constructed through a series of trials is clearly
present, as in an initiatory journey. In Khtobotogone or in Carnalito Full Option, the
environment seemed quite close to a certain reality, based in Marseille. Here, the setting the
character advances through is intentionally mysterious. What are the relationships (either real
or symbolic) between the individual and the collective that emerge from your latest film?
When it comes to this film, there is the same way of dealing with the establishment
of a site for a fiction in a real space, it being the city of Marseille. In Ultimate Vatos,
this is the Parc National des Calanques de Marseille, which I used as a game arena,
Stone Island. The narrative of the film follows the structure of a trial made up of
different tests which the character has to go through and unblock. This is a recurrent
structure in my work. It allows me to place my characters in situations outside their
everyday lives, as well as to set their words in a different context. During this trial, the character is completely alone, left to his own devices in the arena. This isolation
inevitably leads him to talking to himself, which takes the form of a voiceover that
follows us constantly. Through these internal monologues, in which he talks of his
states of mind, the main character also conveys a collective voice, made possible by
the writing process consisting of collages from numerous sources such as French rap,
in particular PNL, Booba and Timal, Louisa Yousfi’s book Rester barbare, as well as
slogans taken from the Army’s advertising campaigns or the mottos of French Foreign
Legion regiments.
For the character, it is necessary for him to submit to the organisational rules, in the hope of
victory, which will provide access to a new situation. He is profoundly marked, both physically
and physiologically. What does the mental side come down to here? After a series of projects
based on love (Hlel Academy) – evoking feelings of being in love but also friendship – what
does this reflexion about personal transformation in this new film inaugurate?
Here, the focus is on the figure of a fighter and factors in his construction. Parts
of the text provide us with some information about the causes of his desire for
insurrection and his need to become the Ultimate Vatos, which represents for him the
ultimate warrior, the pirate. The character and his construction were inspired by the
concept of the body-as-weapon and the concept of transformation, which are proper
to anime, often motivated by a wish for vengeance or the need to prove yourself. As
with the figure of the Kage in Naruto, the Saiyan in Dragon Ball or else the Hunter in
HxH, here it is the status of Ultimate Vatos that the character wants to attain.