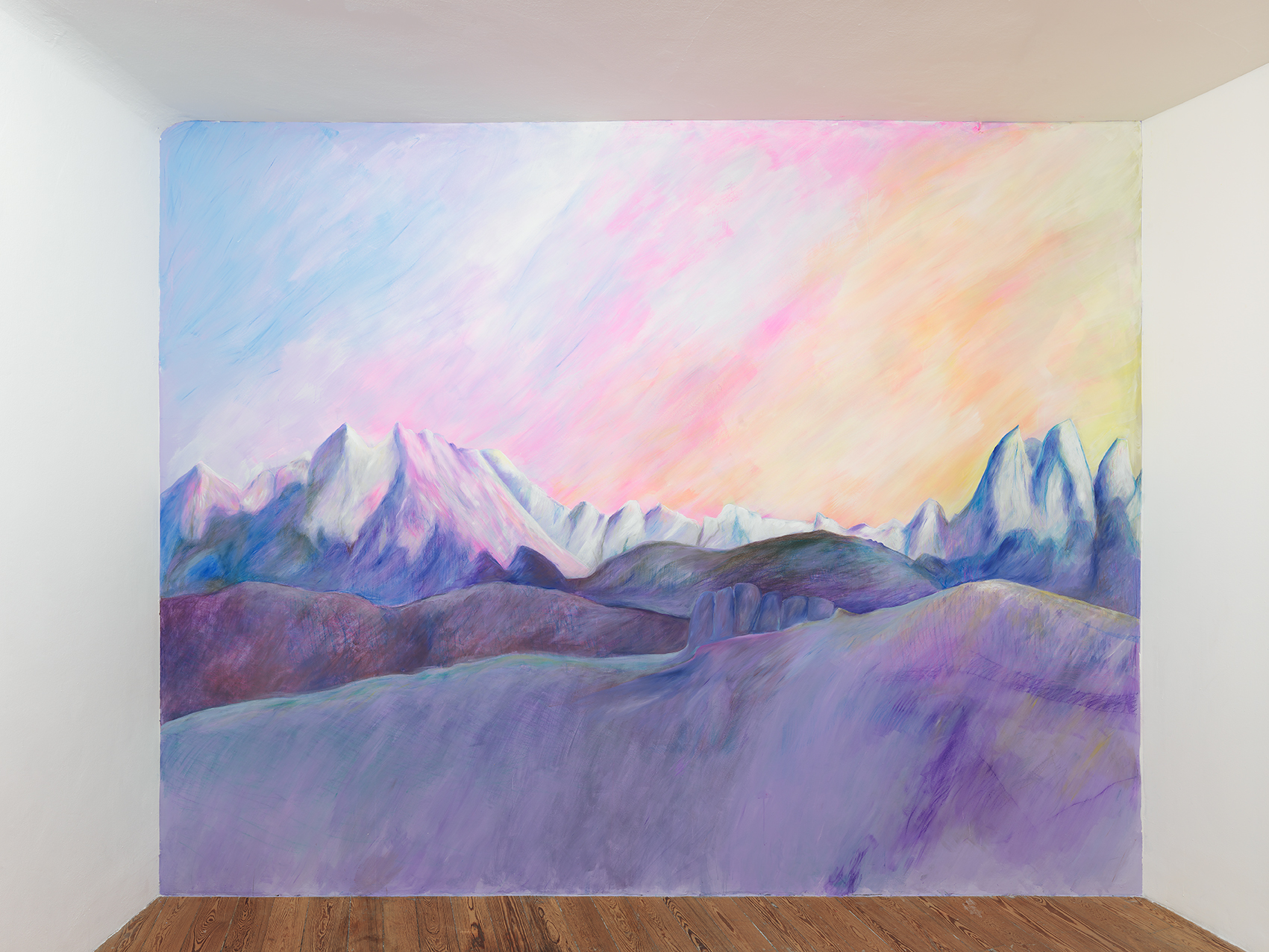 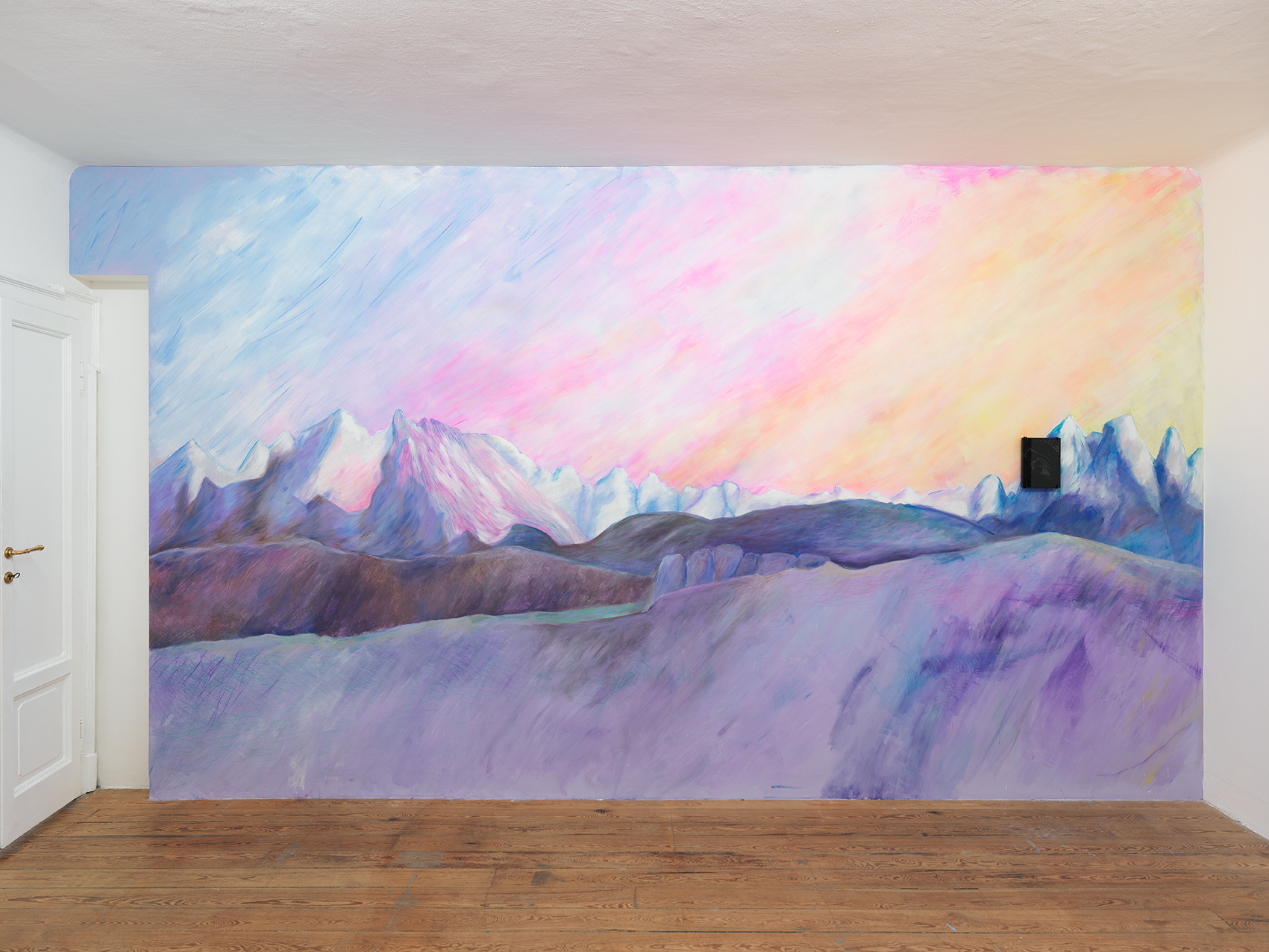 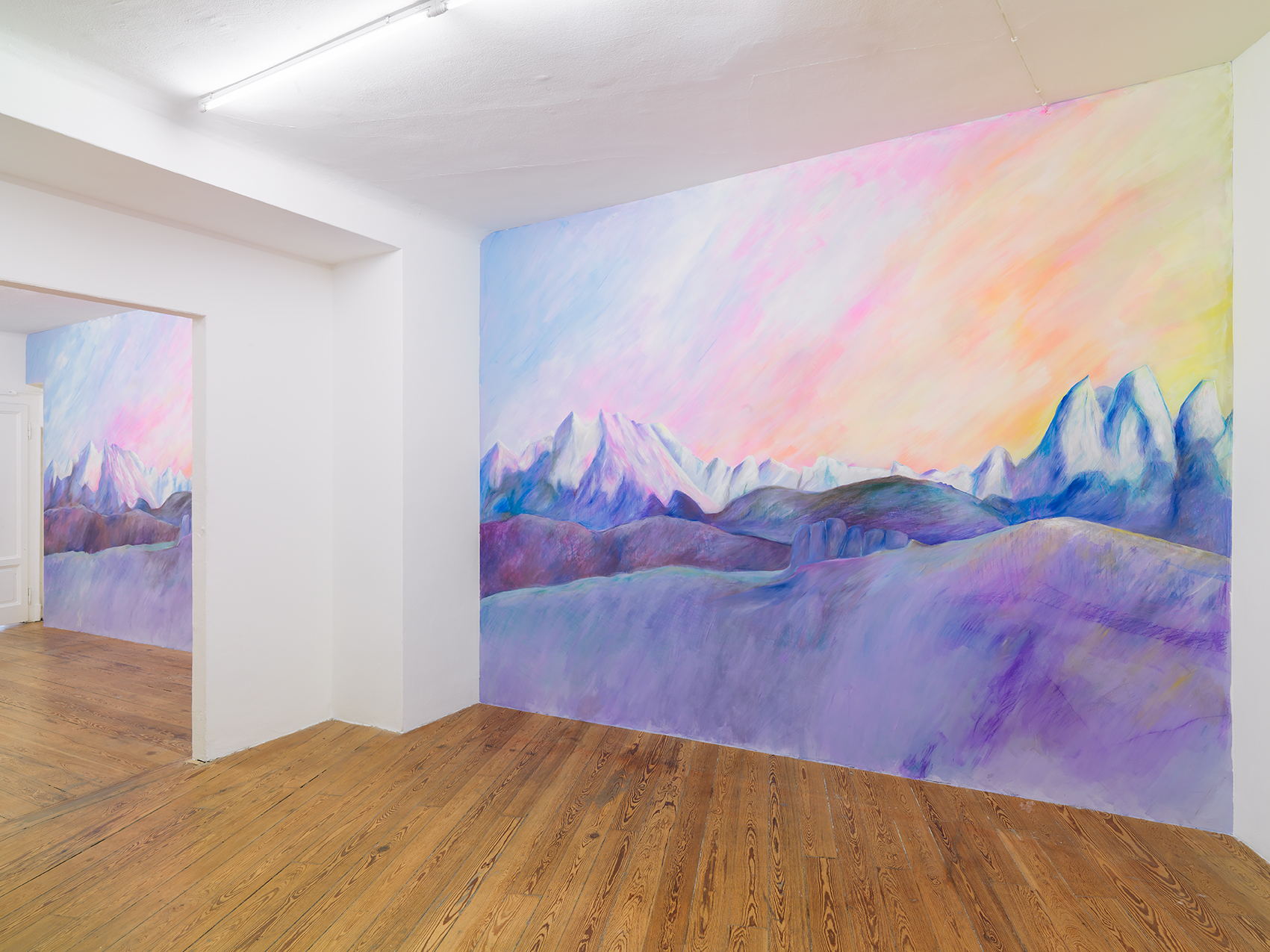 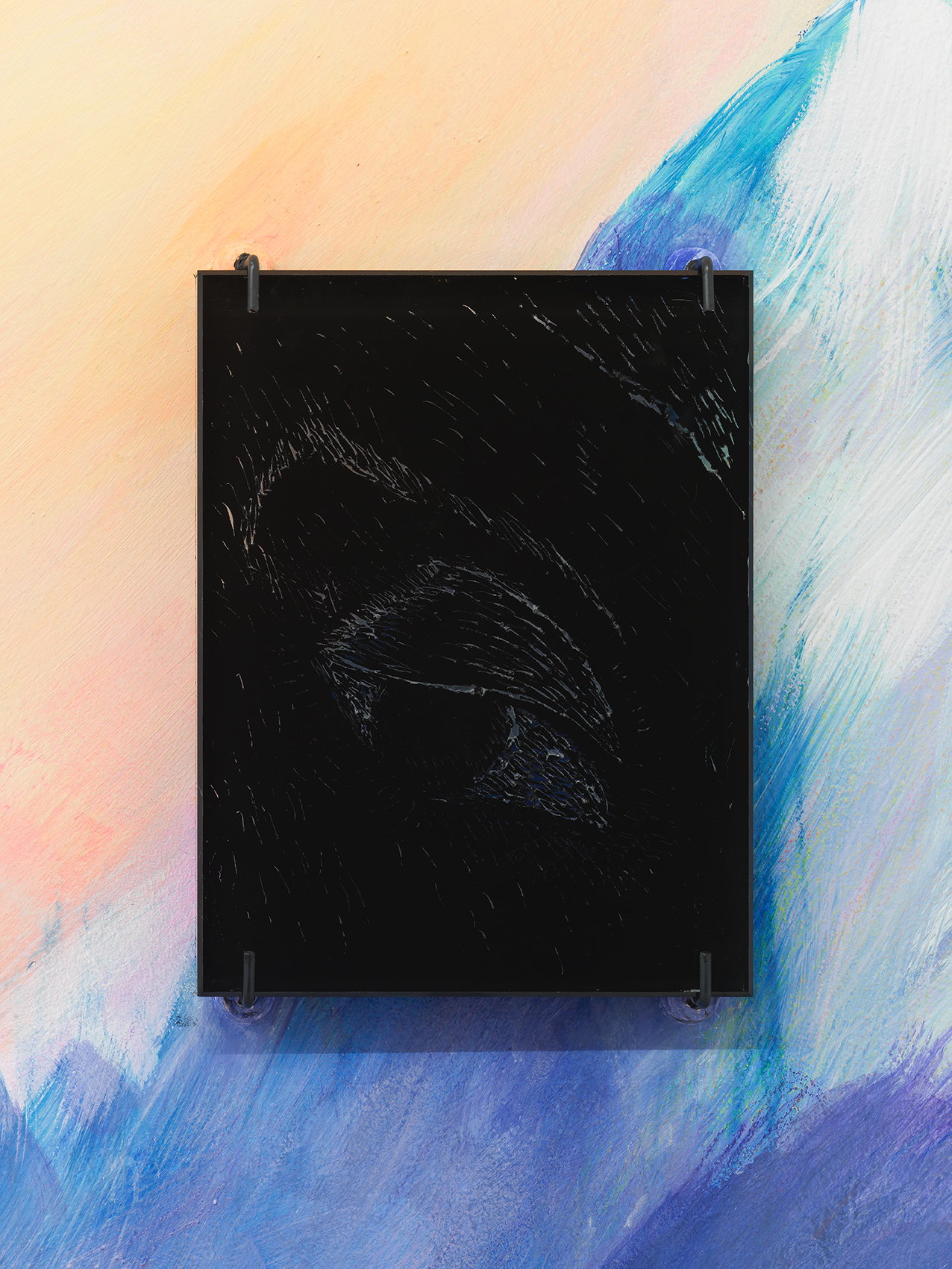 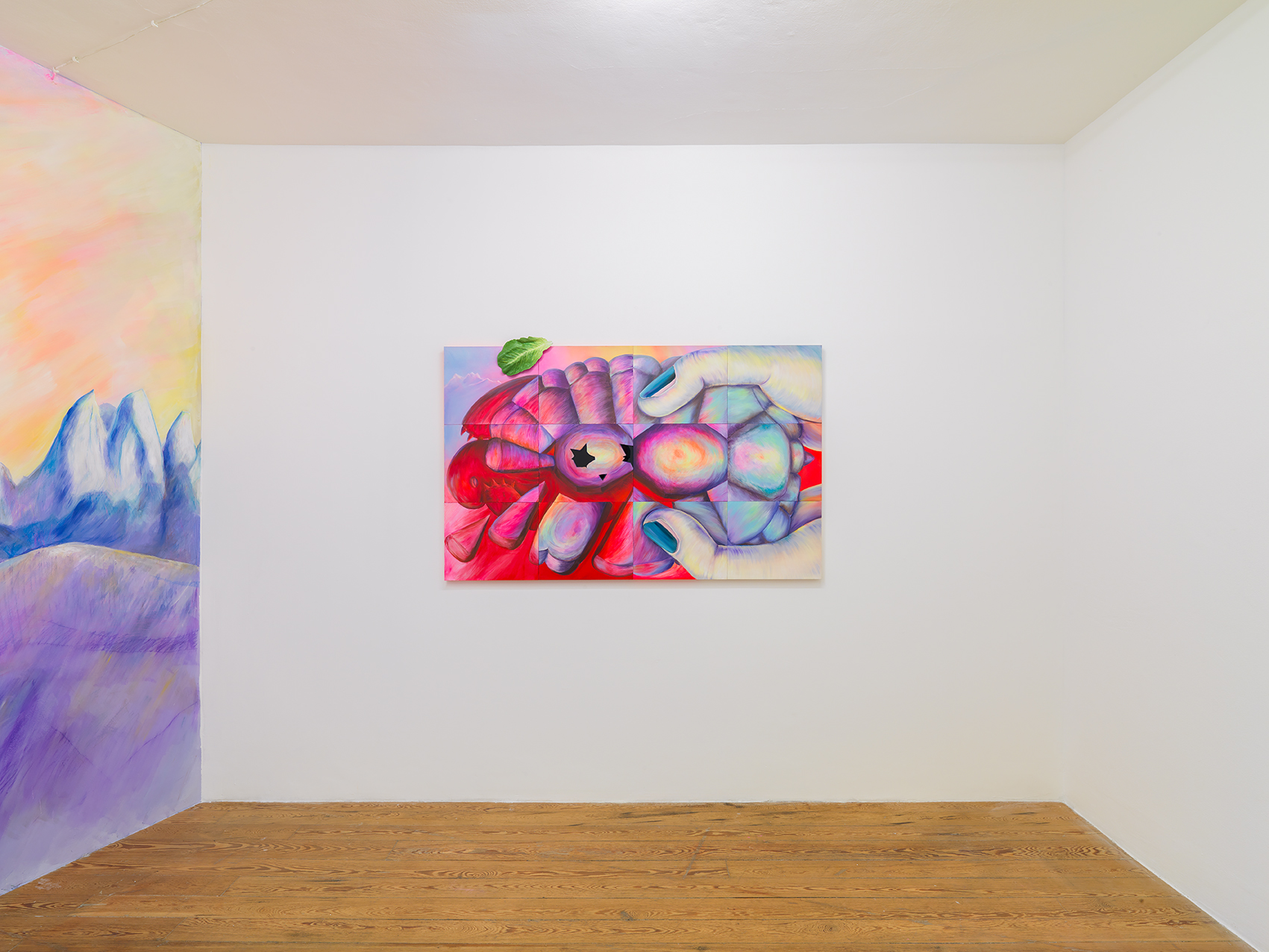 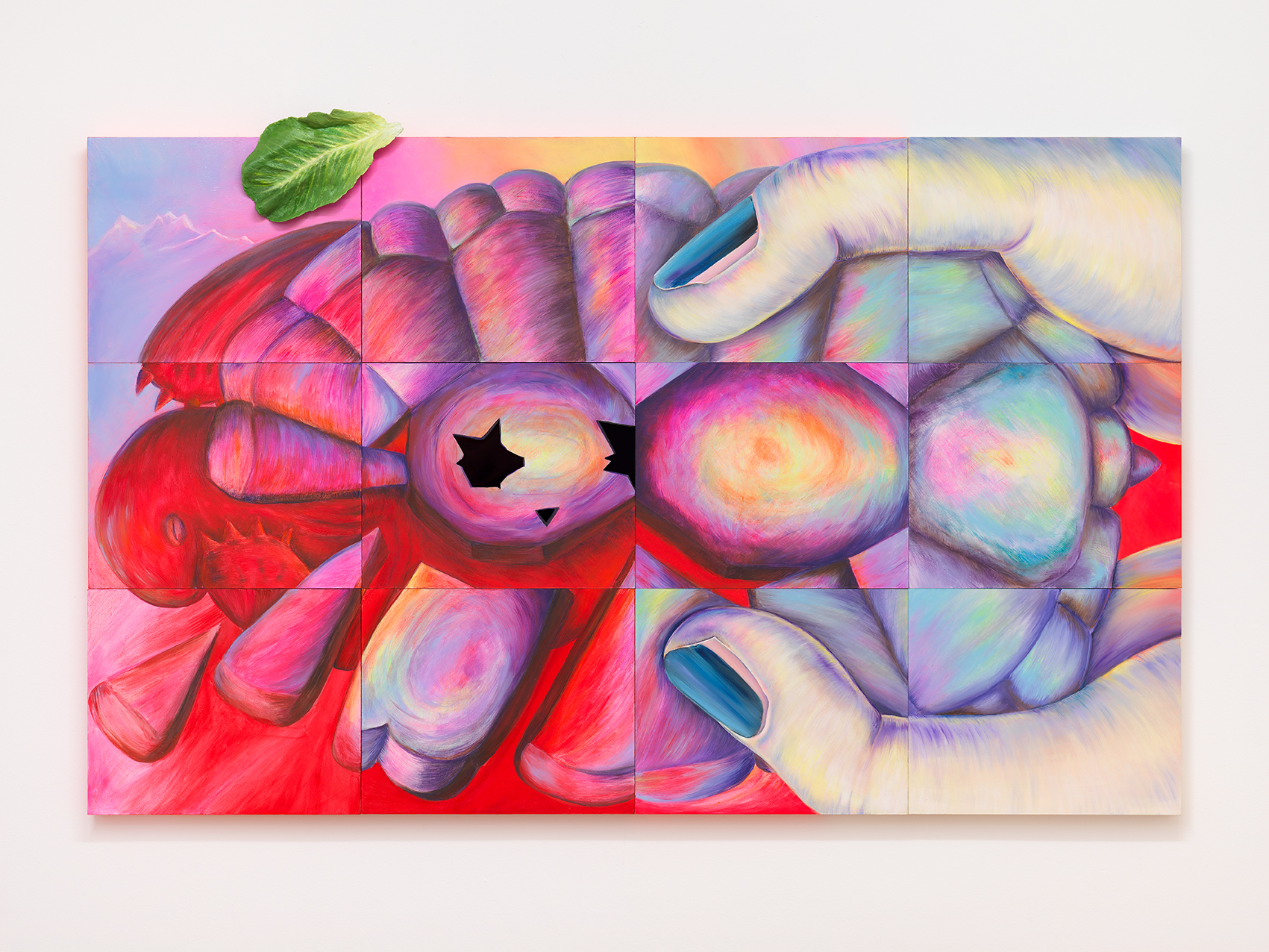 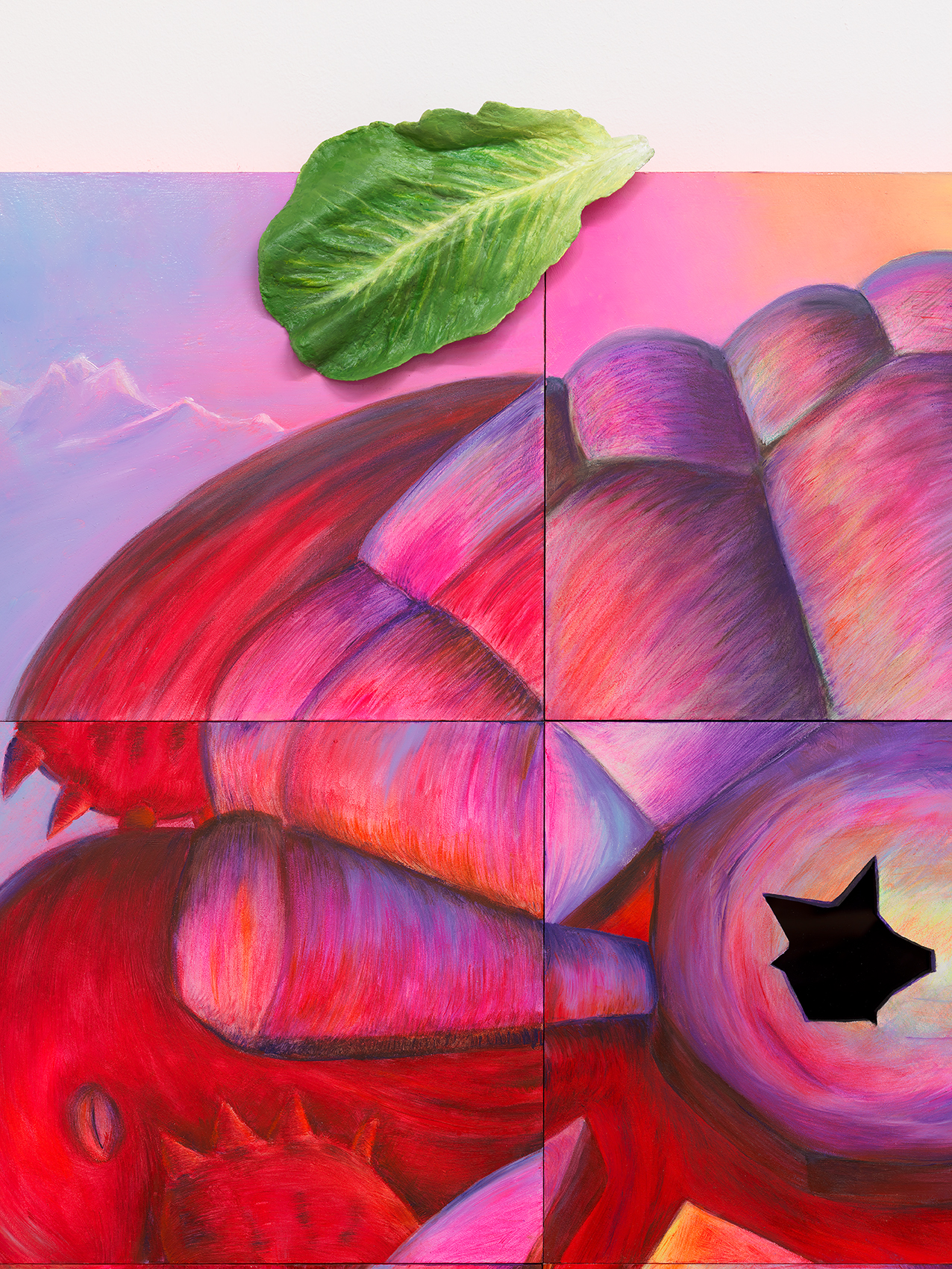 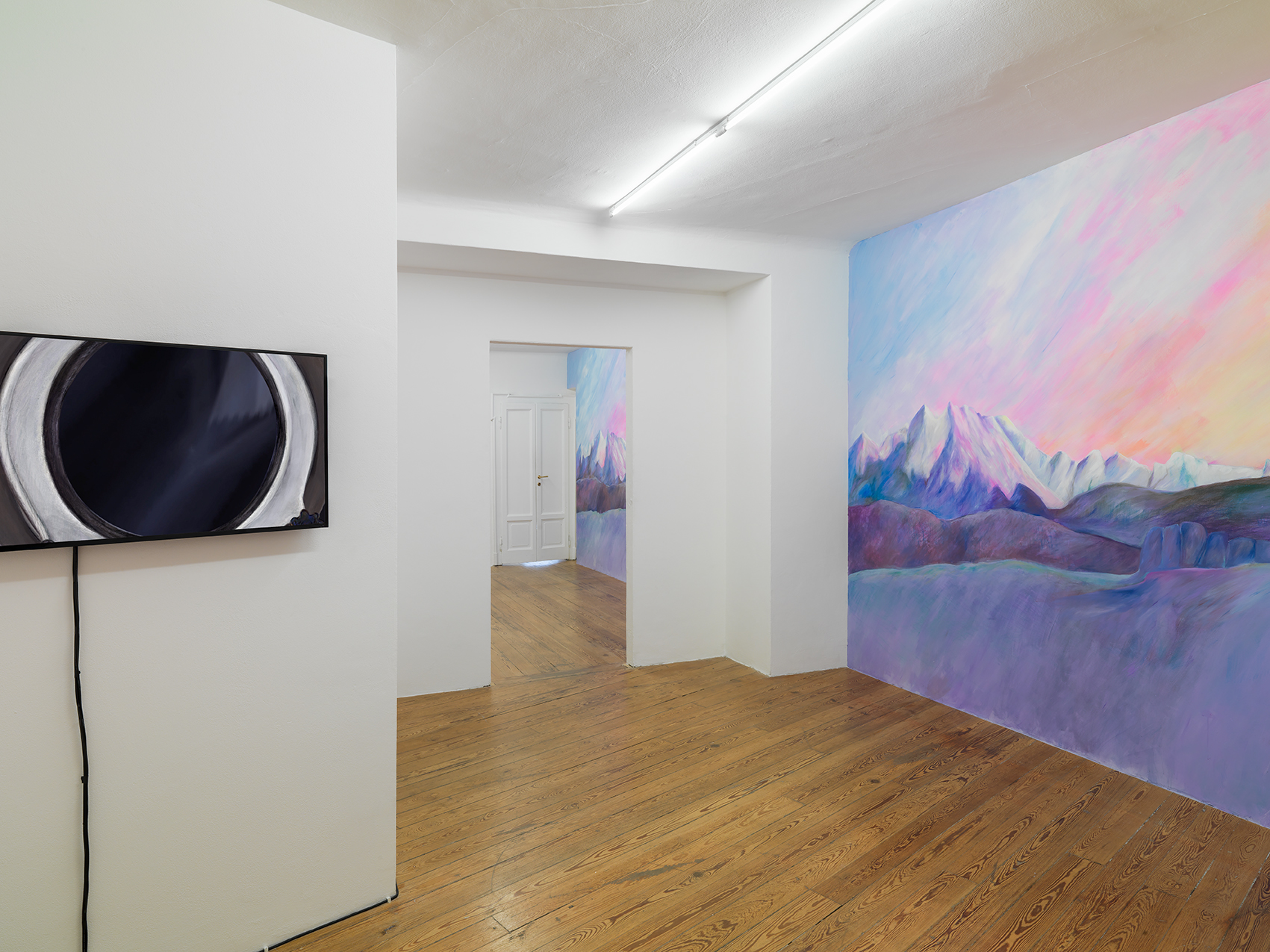 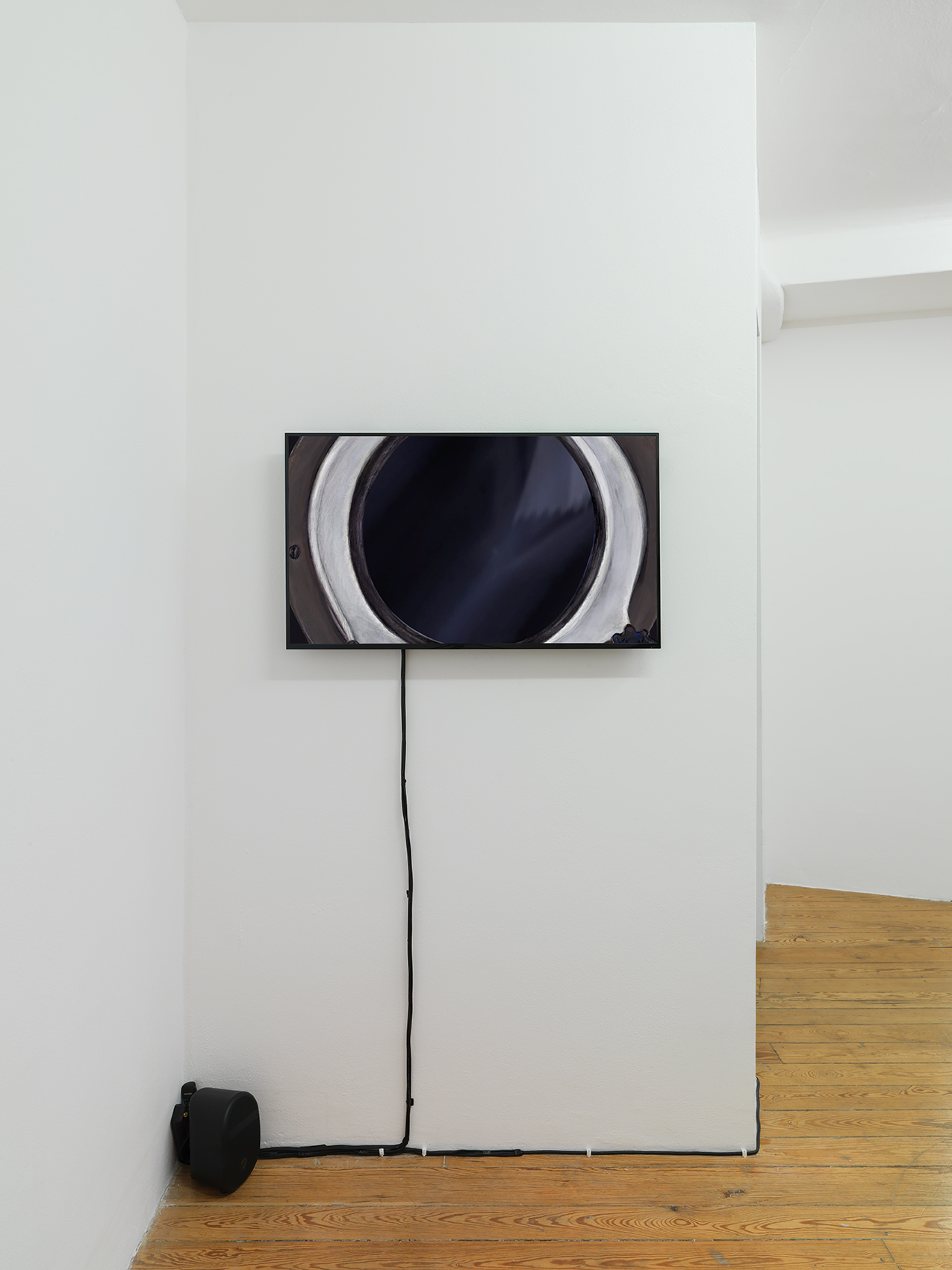 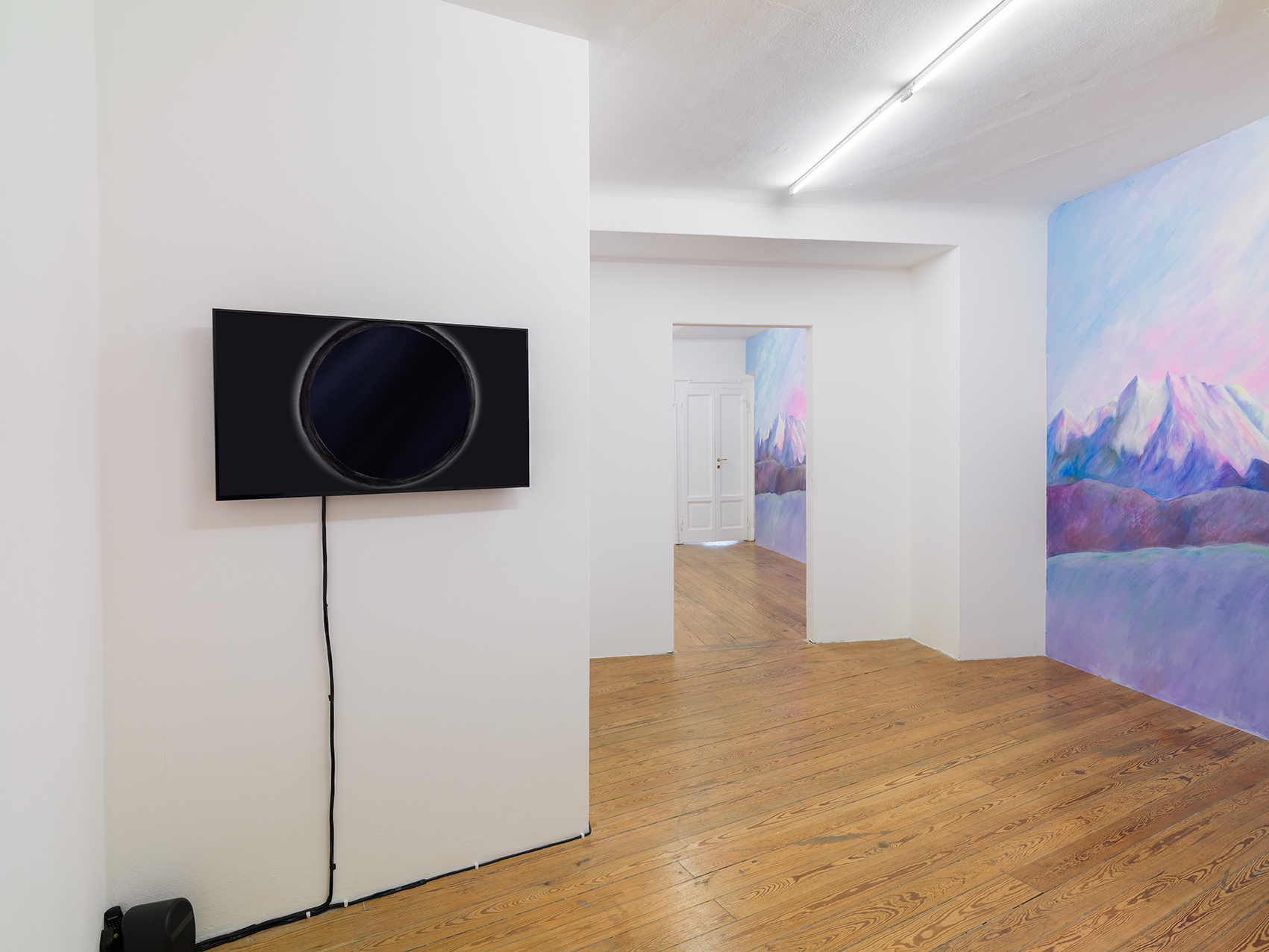 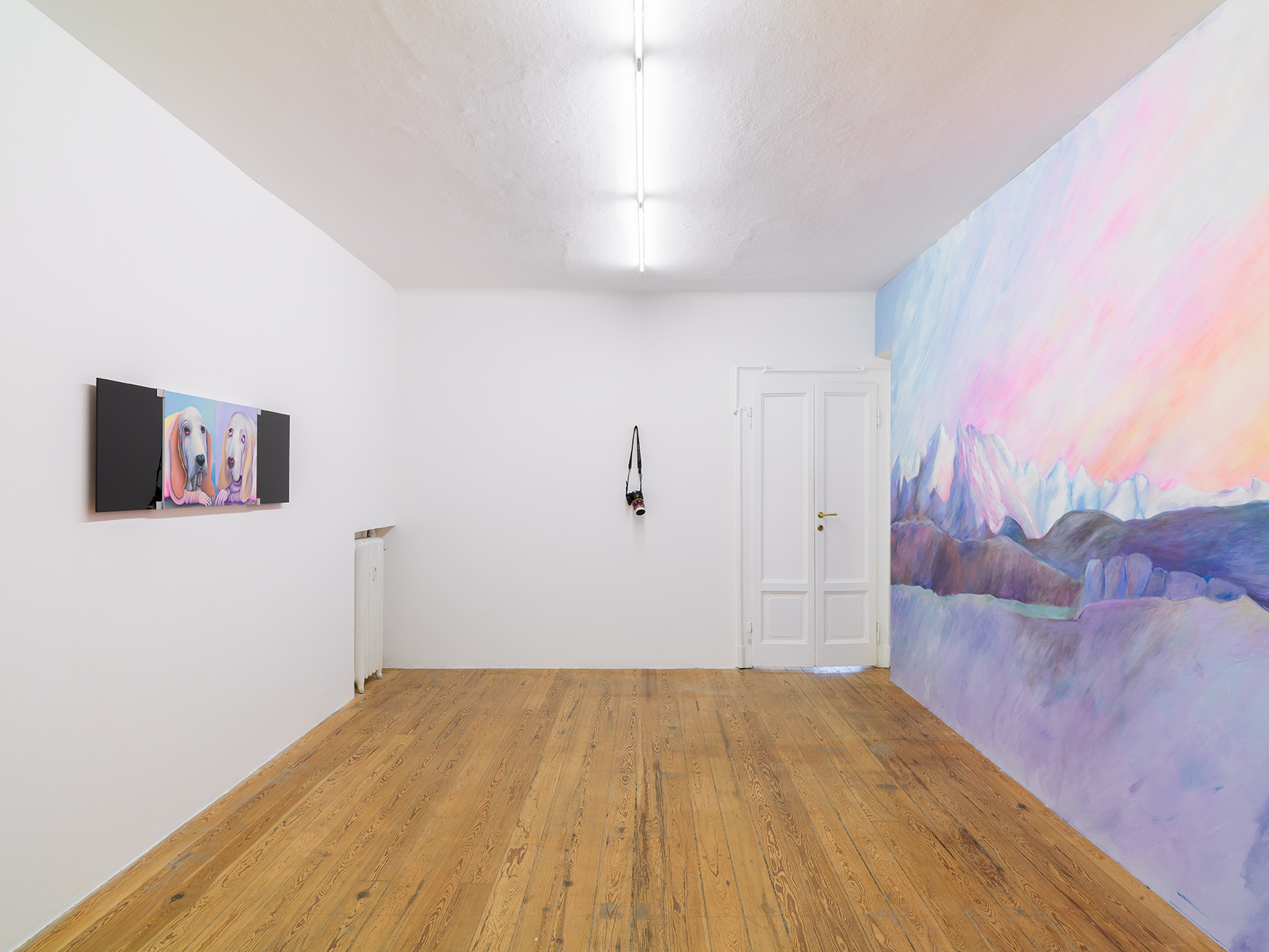 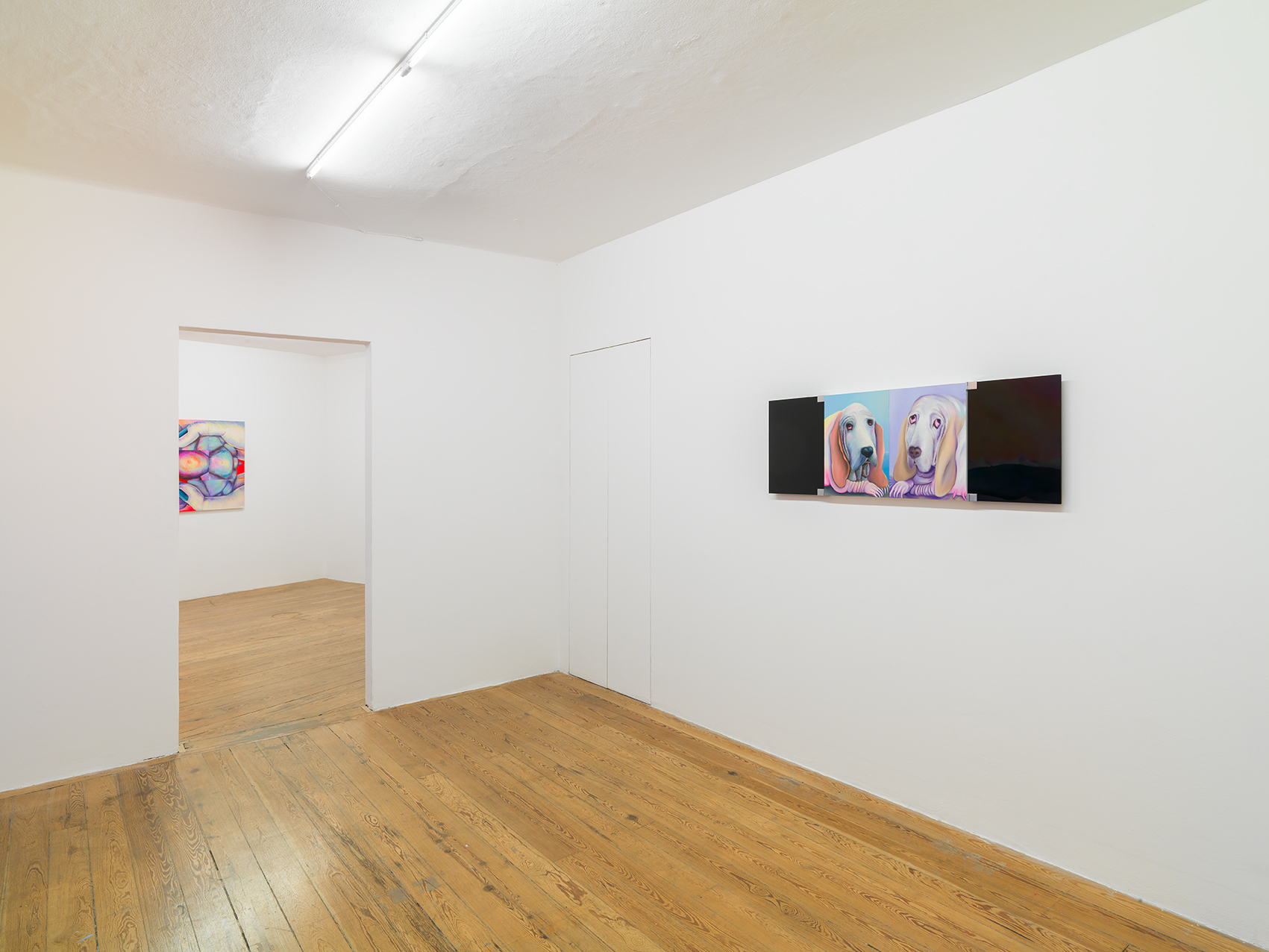 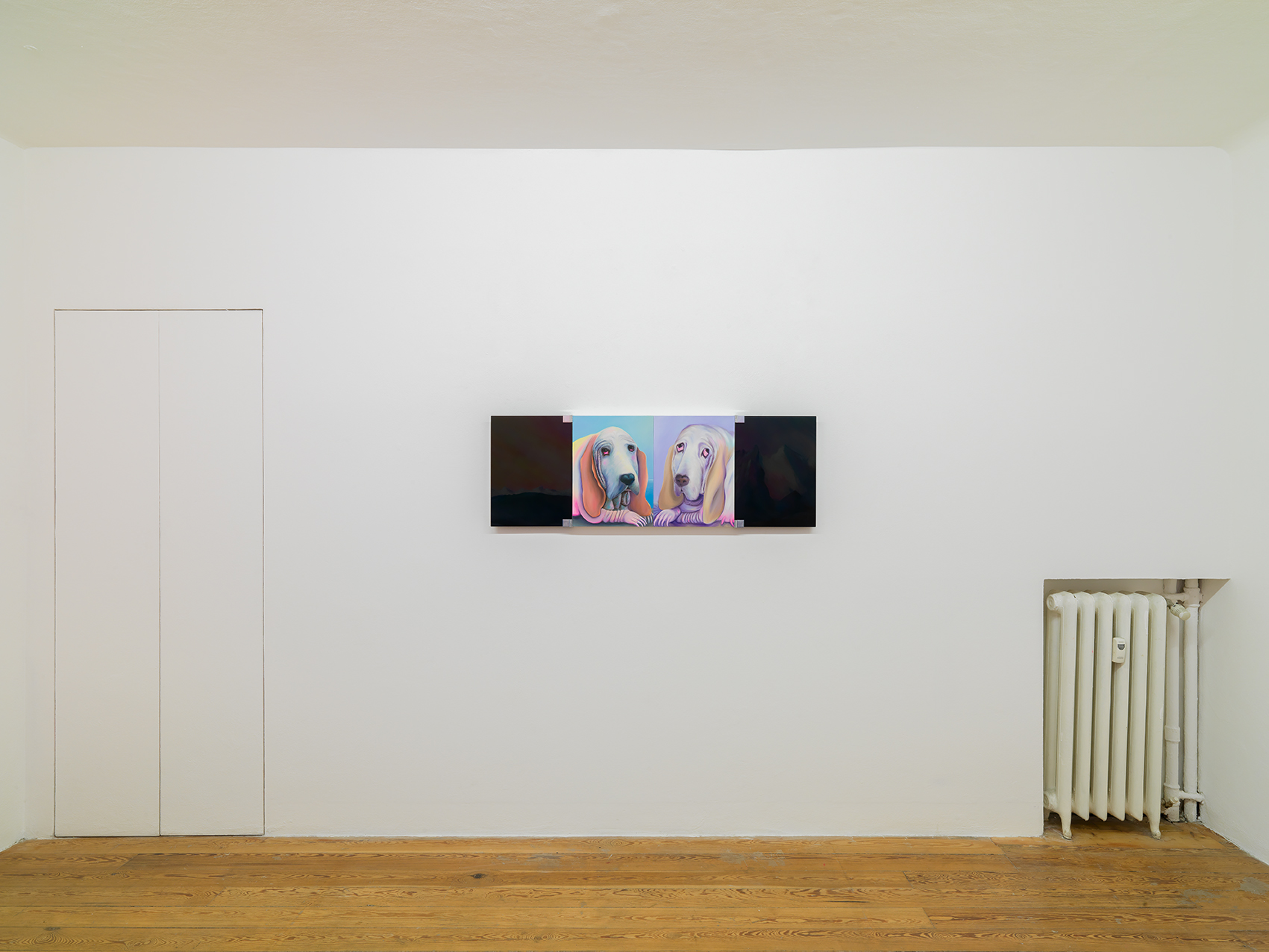 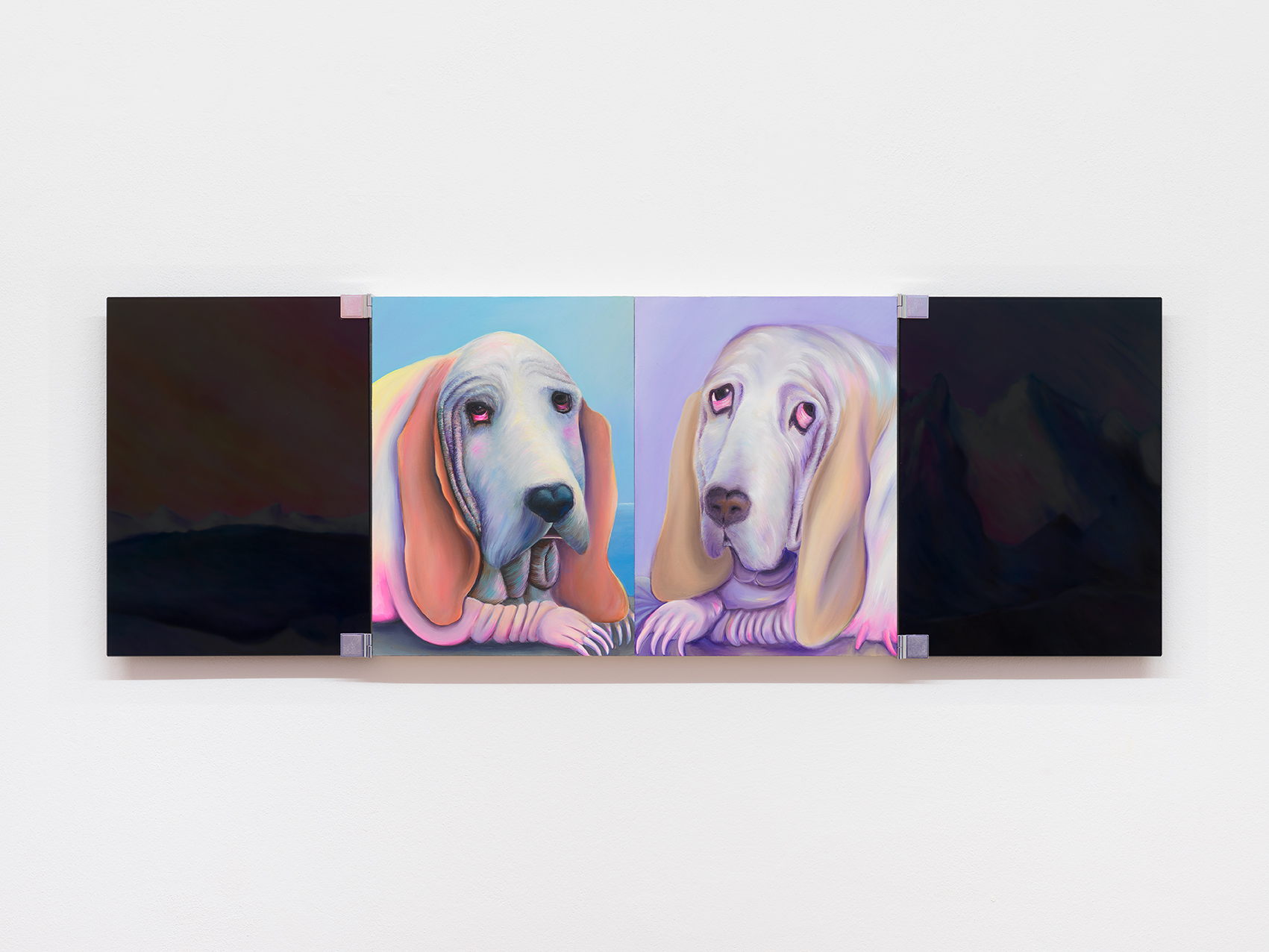 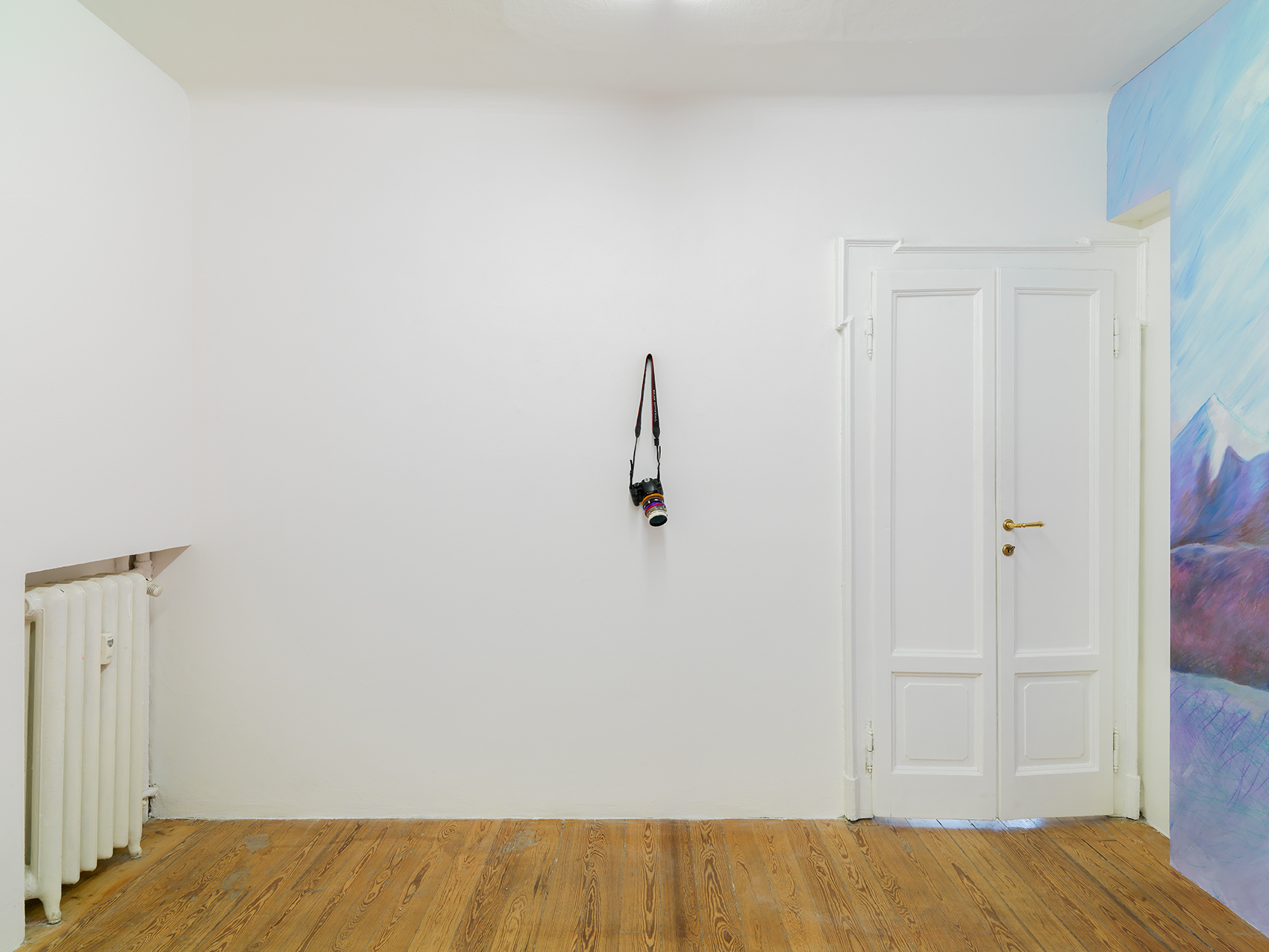 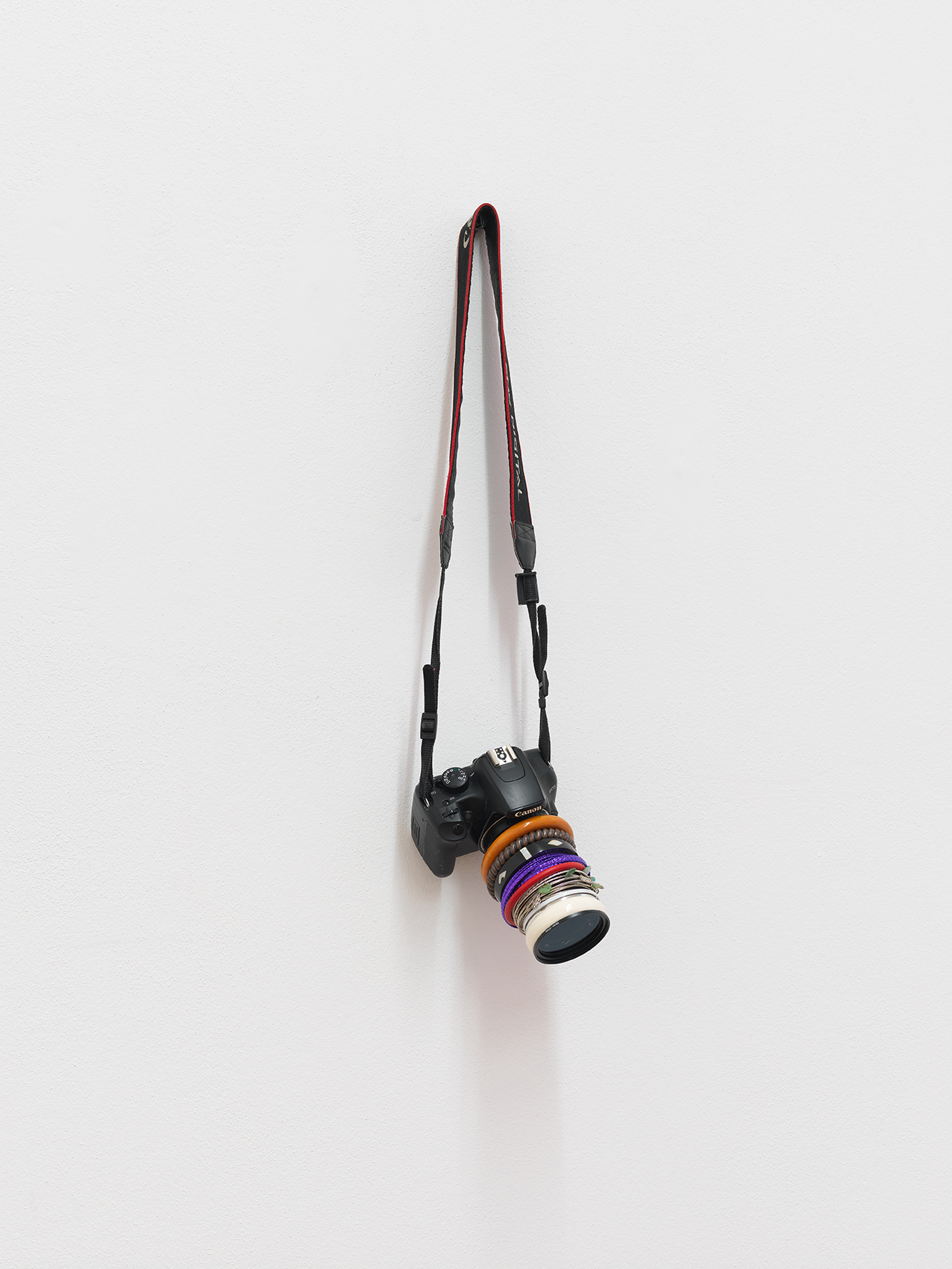 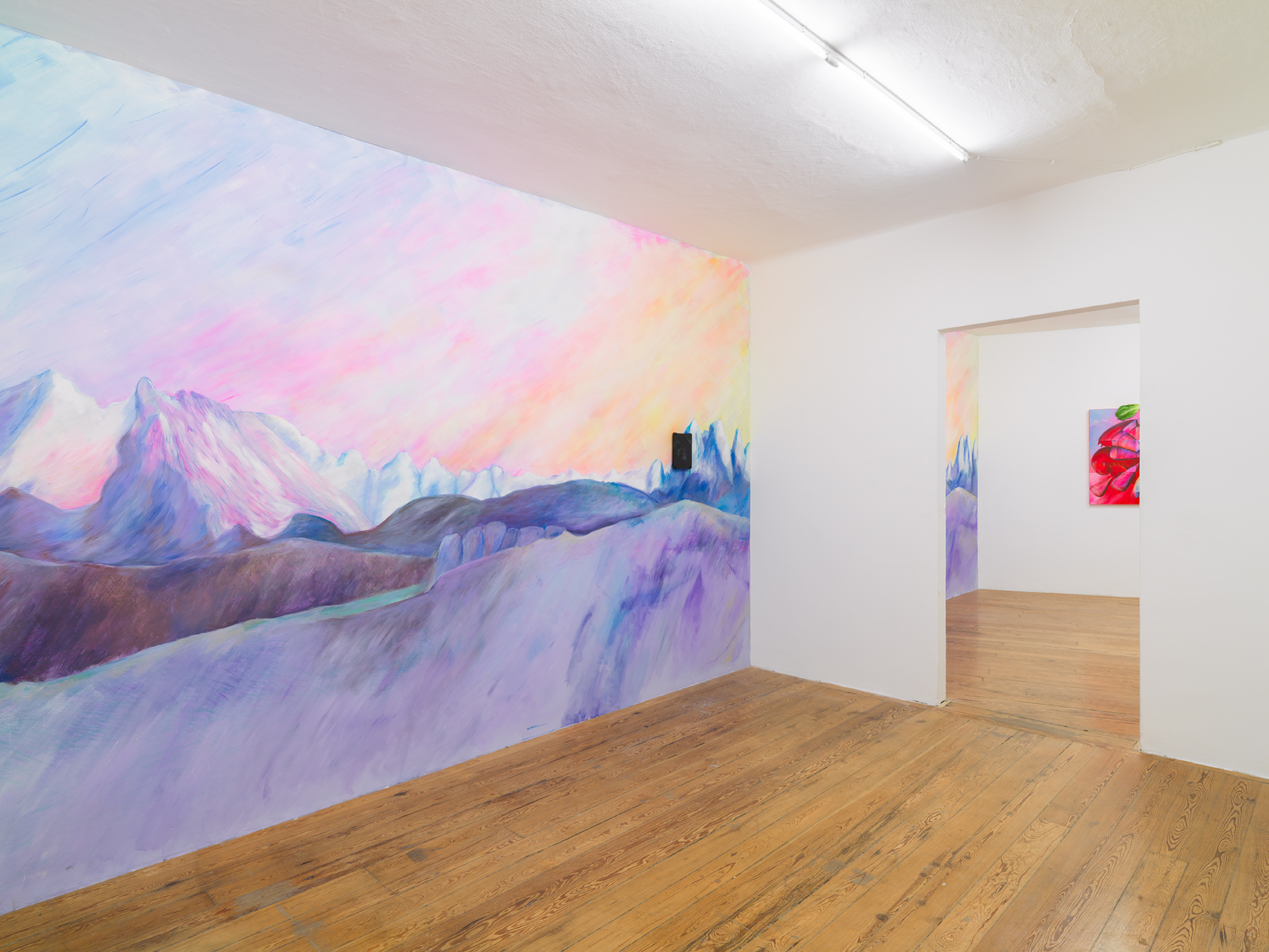 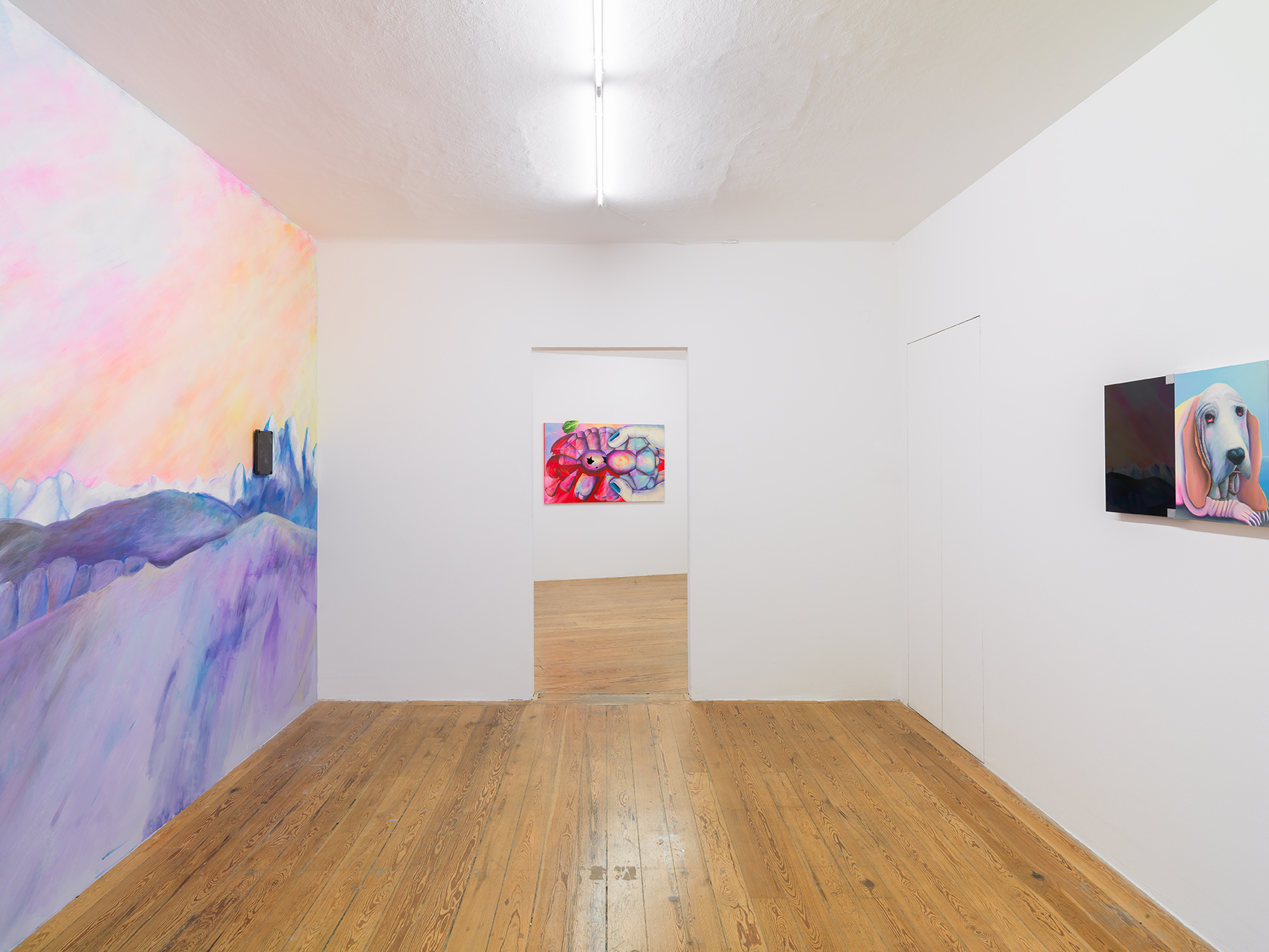 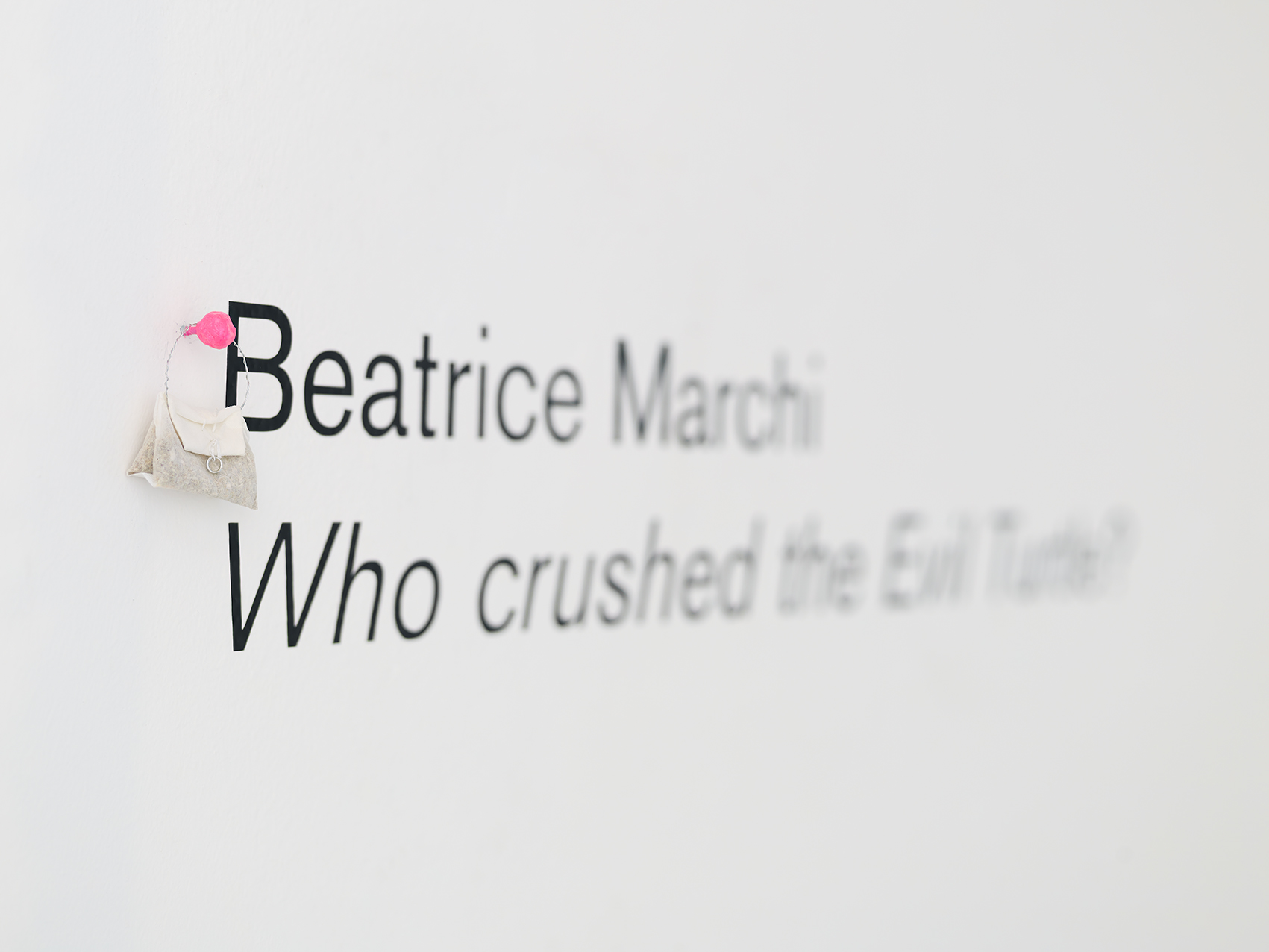 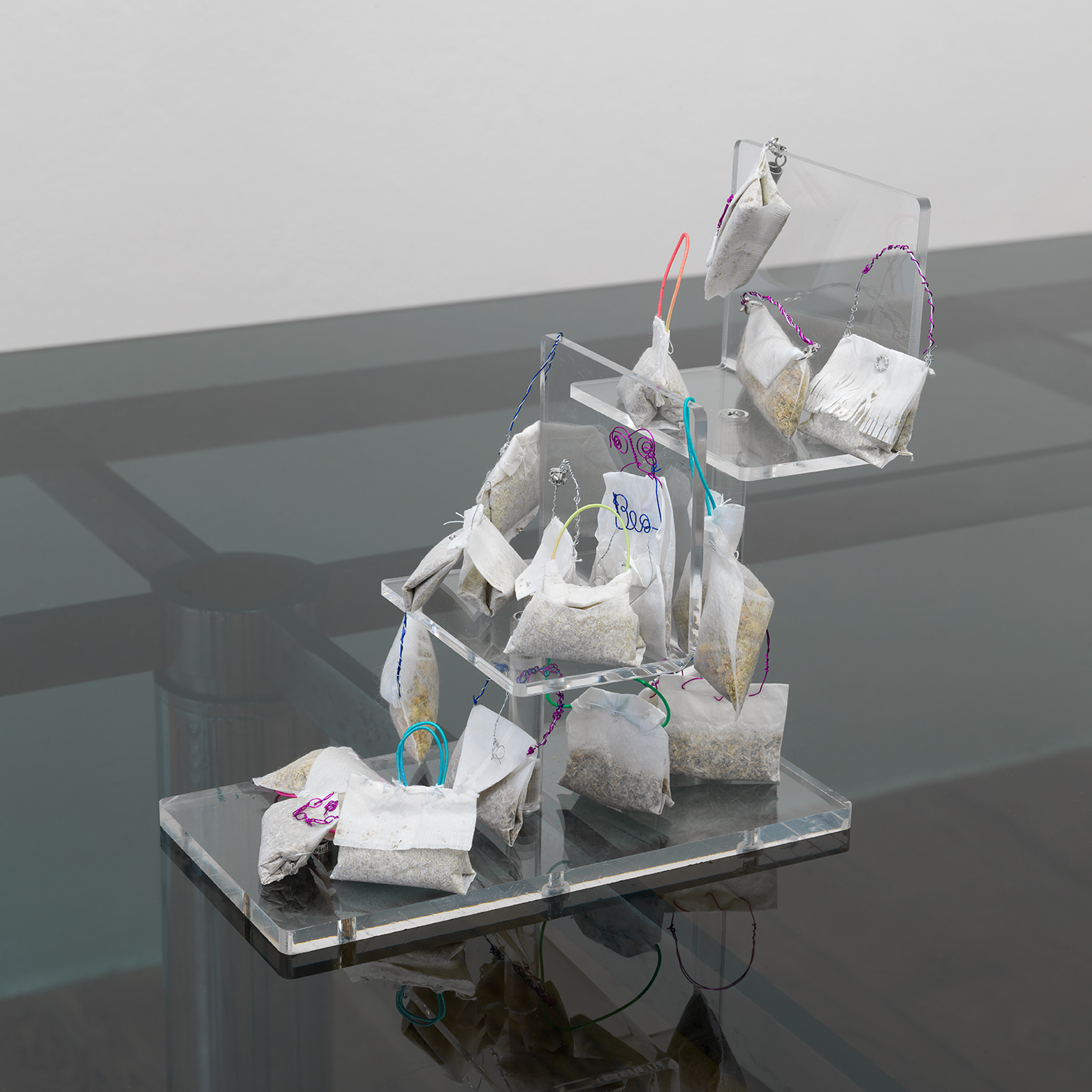 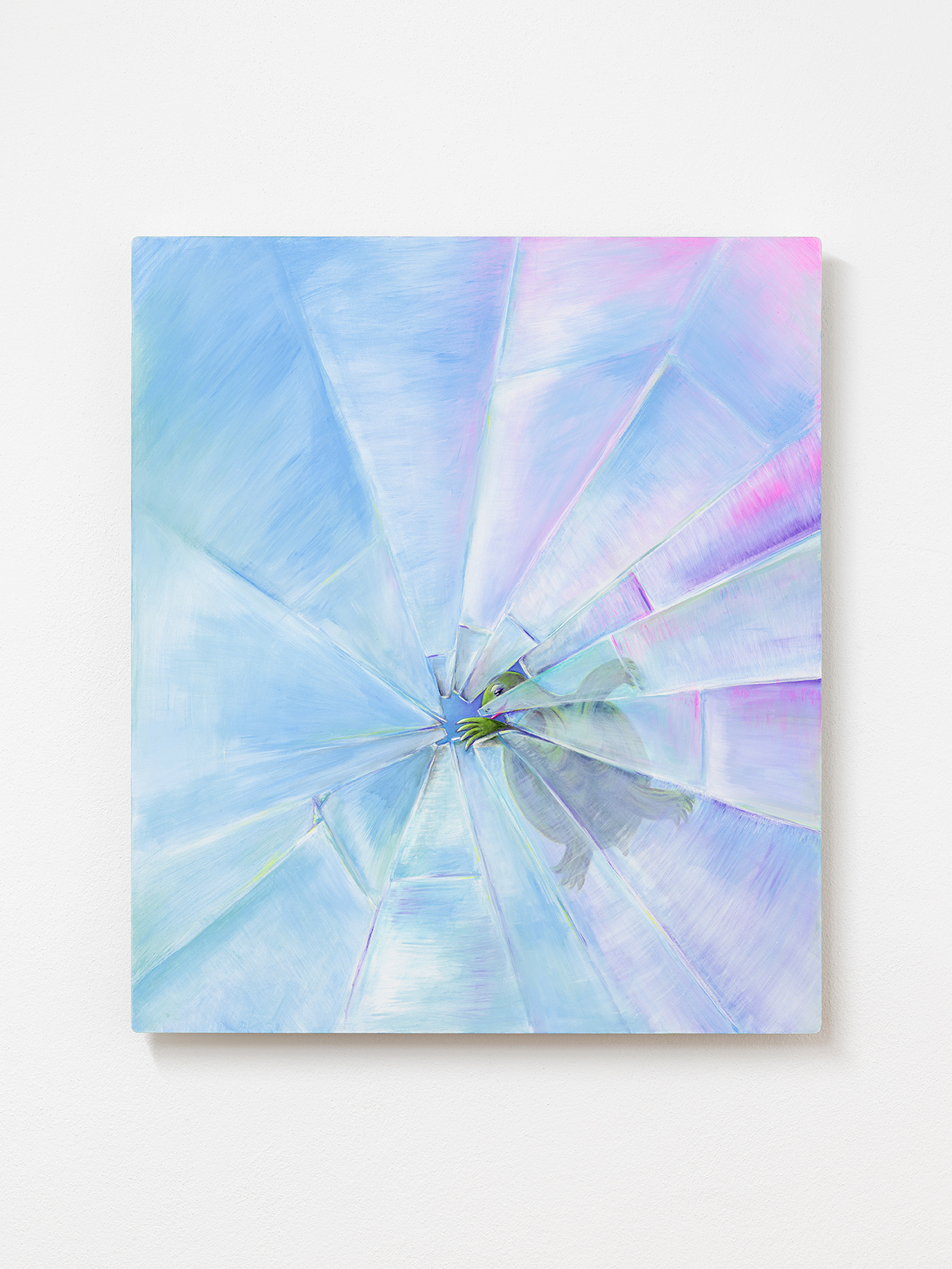 Photo Alessandro Zambianchi
The story goes like this. Two portraits were commissioned: a version that presented the person as good and another that presented them as bad, and when they died, the living decided which portrait to display. Which version befits the life lived — good or bad?!?!
Beatrice’s diptych The Good/Bad Mafalda echoes this story, compassionately depicting her family dog who died in old age. Two colourful portraits of Mafalda with droopy eyes, are flanked by panels of glass painted black that are easily mistaken for tablet screens. These can be folded over to show only one side of the painting, hiding the other. Another animal protagonist in the show, takes the form of ag turtle. In one painting it appears to be clawingnat a crack in a glass ceiling. In the other painting the turtle is itself breaking apart, held between two thumbs quite like a phone, painted on a surface that is modular quite like a turtleshell…. This character is the ,evil turtle’. And there is a real story which inspired it. She was found crushed, twice: once behind a door and once a dog broke her shell. She survived b u t she became very aggressive.
Obliquely, I’m reminded of a Youtube video titled Envy from Contra Points. The host of this channel, Natalie Wynn, refers to Friedrich Nietzsche’s Genealogy of Morals and the reversal of attributes once considered good and bad ((((Ancient athletic gods were worshiped as good while the weak and sick equaled bad; until slaves revolted and claimed that suffering equaled good and noble!)))).
Wynn applies Nietzsche’s Genealogy of morals to social media and the court of public opinion, proposing that in many instances where public figures are taken down in the guise of social Good, it is rather envy sublimated to contempt. I think Beatrice’s comically aggro turtle and the colourful pooches are similarly fallible creatures.
The wallpaintings titled «La vendetta della vacca lussuriosa» (Revenge of the Lustful Cow) are inspired by a Giovanni Segantini landscape, especially by a story of how he painted it (…and I don’t mean which brushes he used).
According to one account, he spent 6 months outdoors in the mountains, setting up the scene with cows and farmers. To fix the cows in position, he poked or cut the cow so that by licking the wound, the cow would hold the same pose. “I don’t know if this is true” Beatrice remarks about this story and that of the double portraits. But they’re wild tales and possibly quite a bit more.
Julia Dubsky
Tags Beatrice Marchi, Galleria Federico Vavassori, Milan
Newer Post Older Post Home