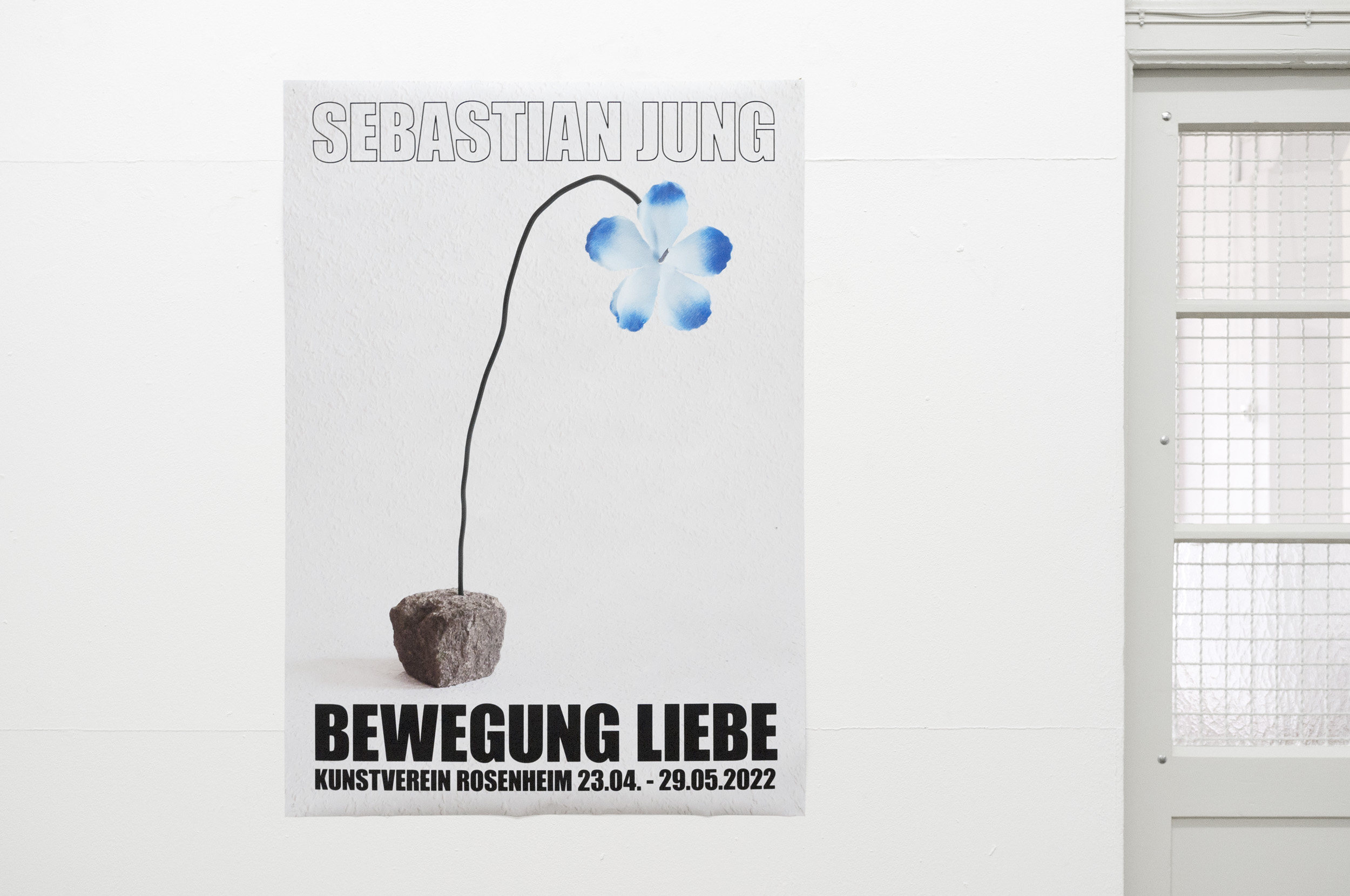 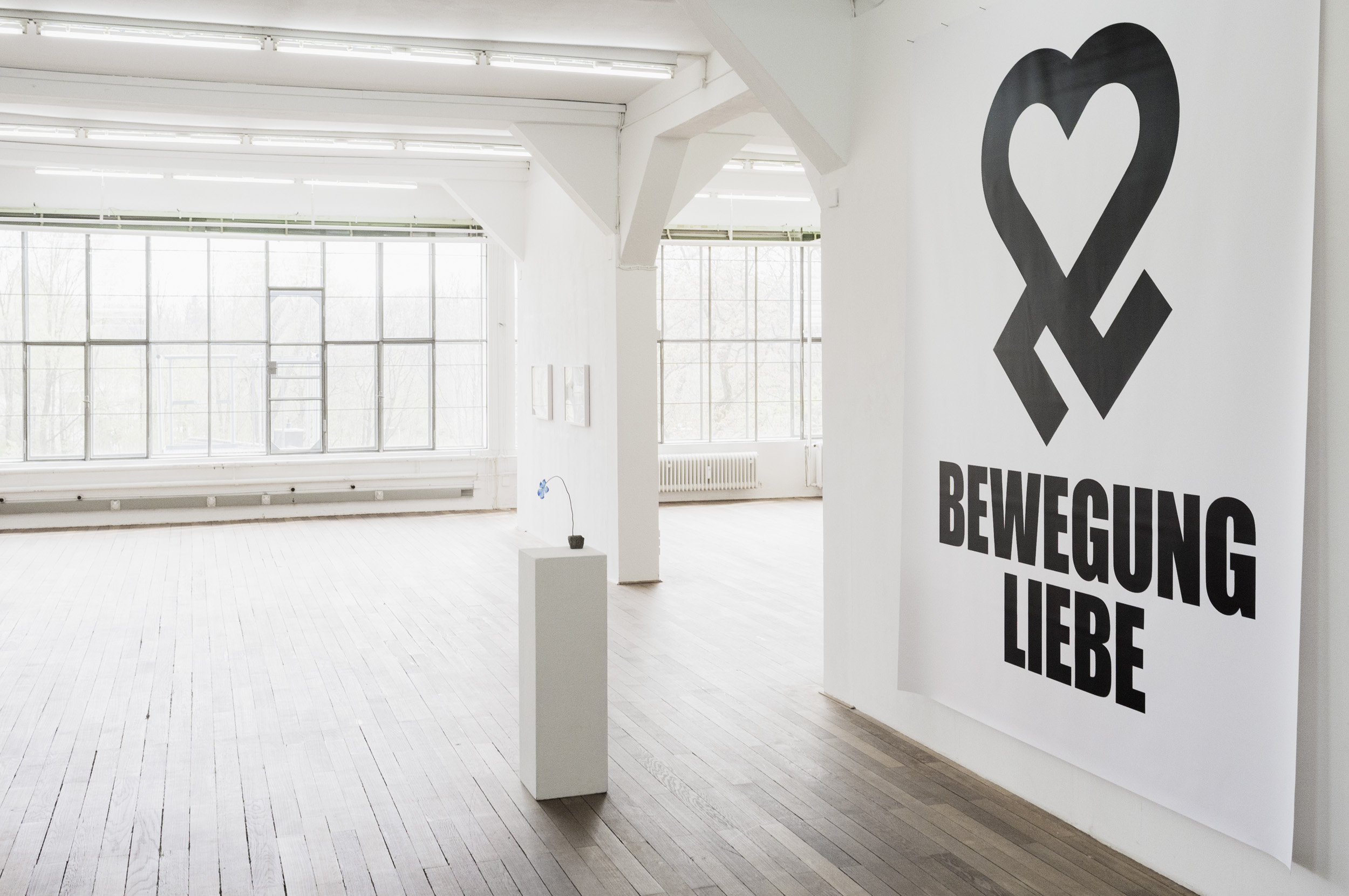 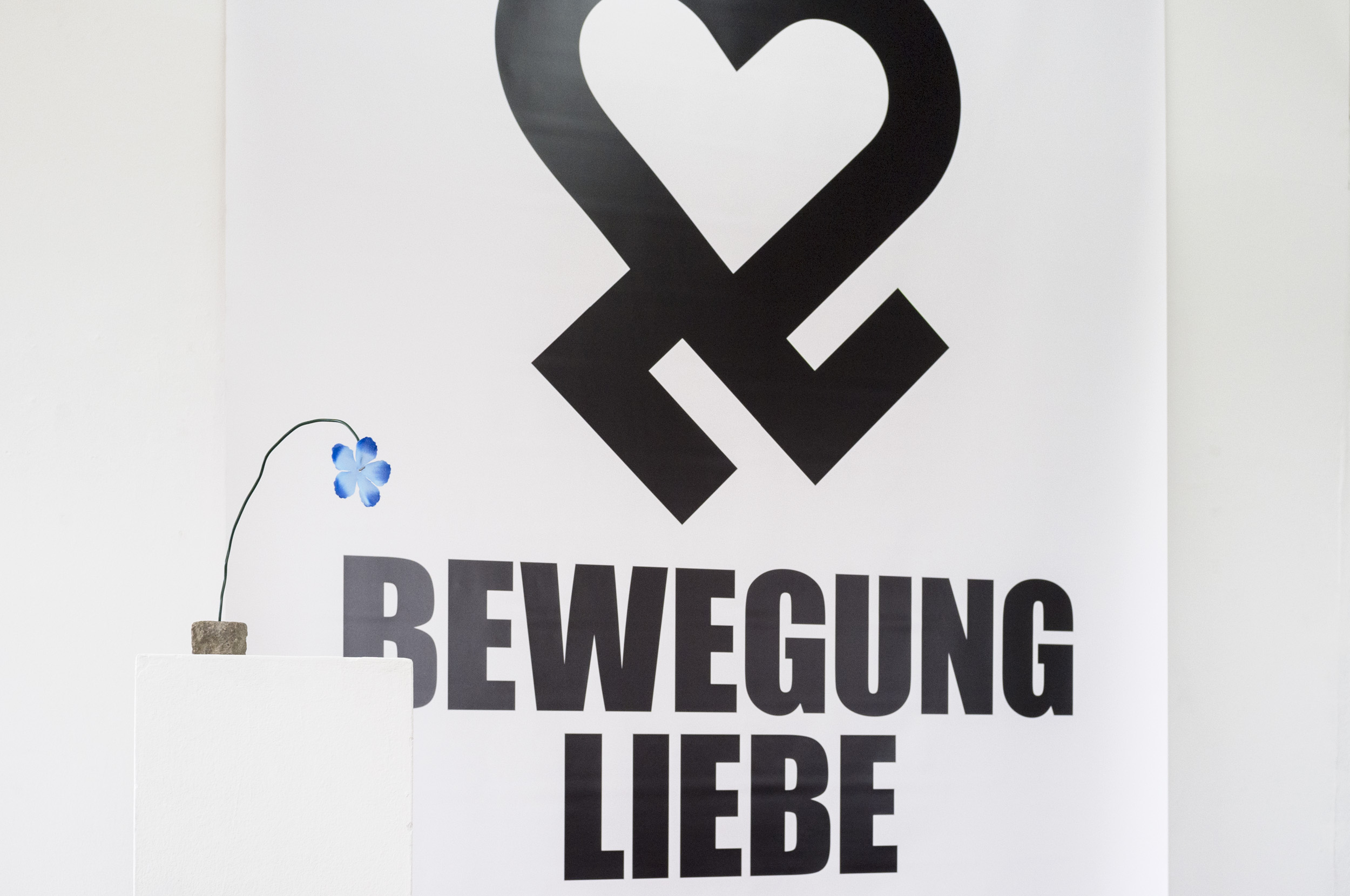 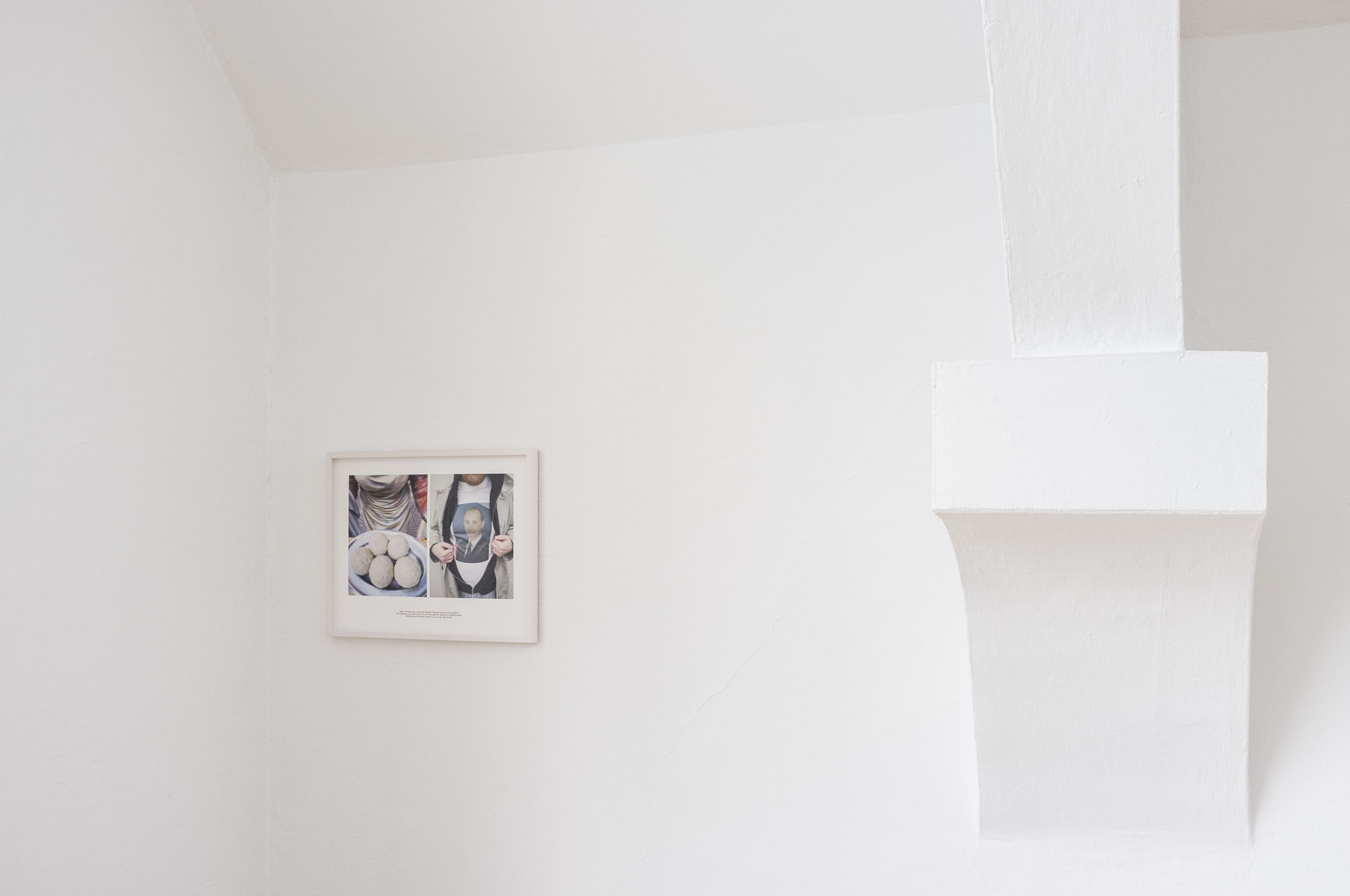 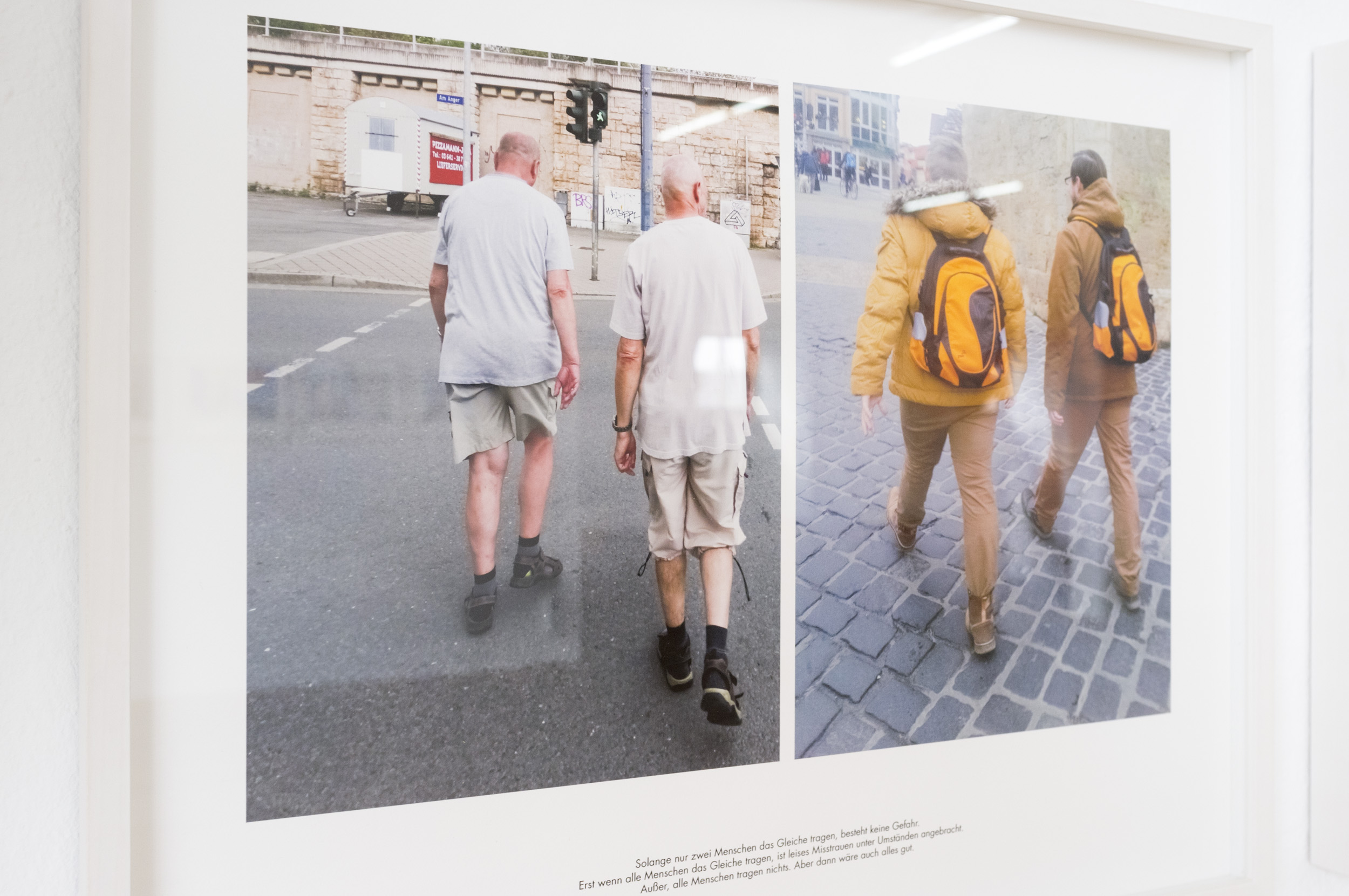 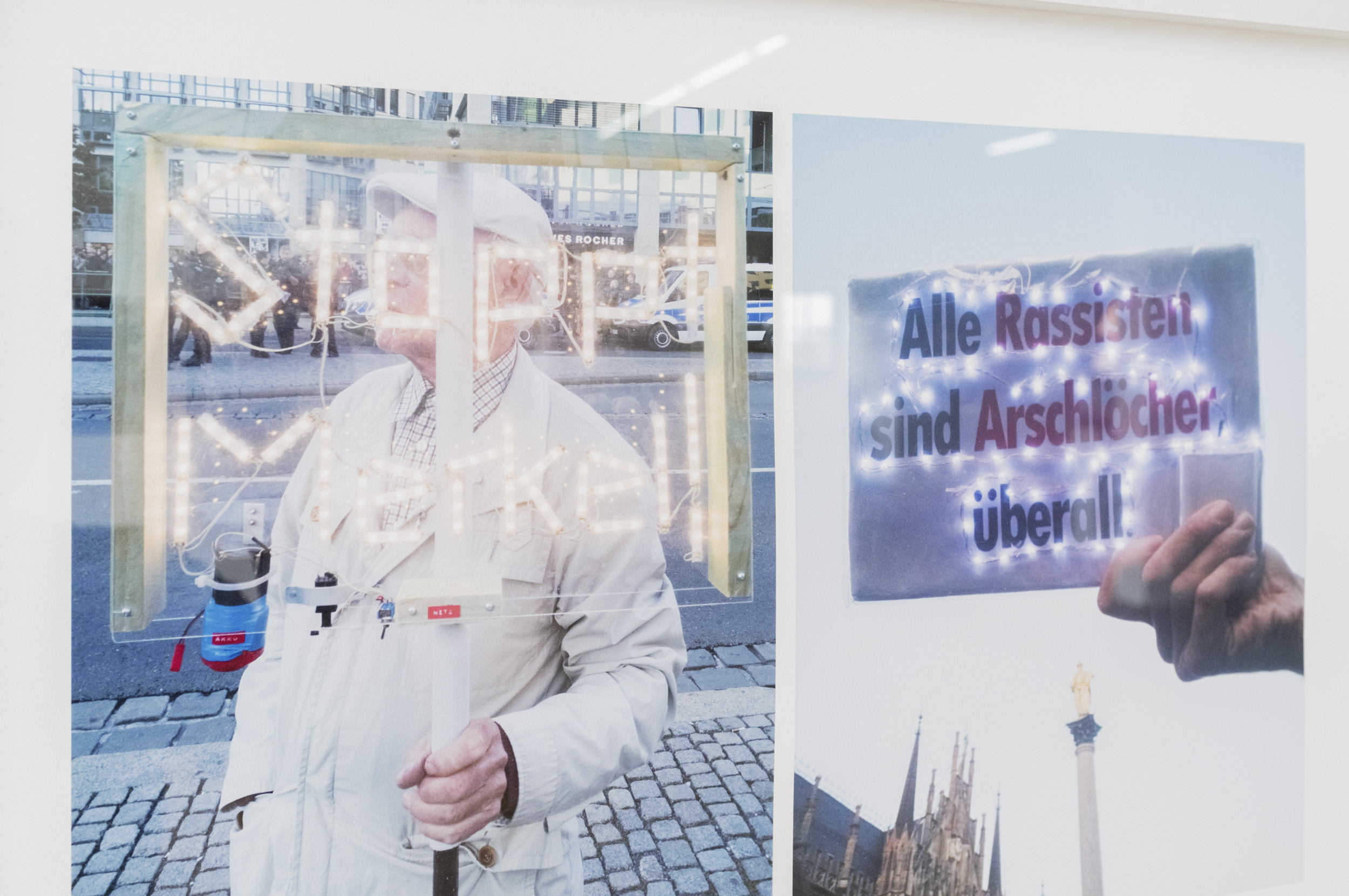 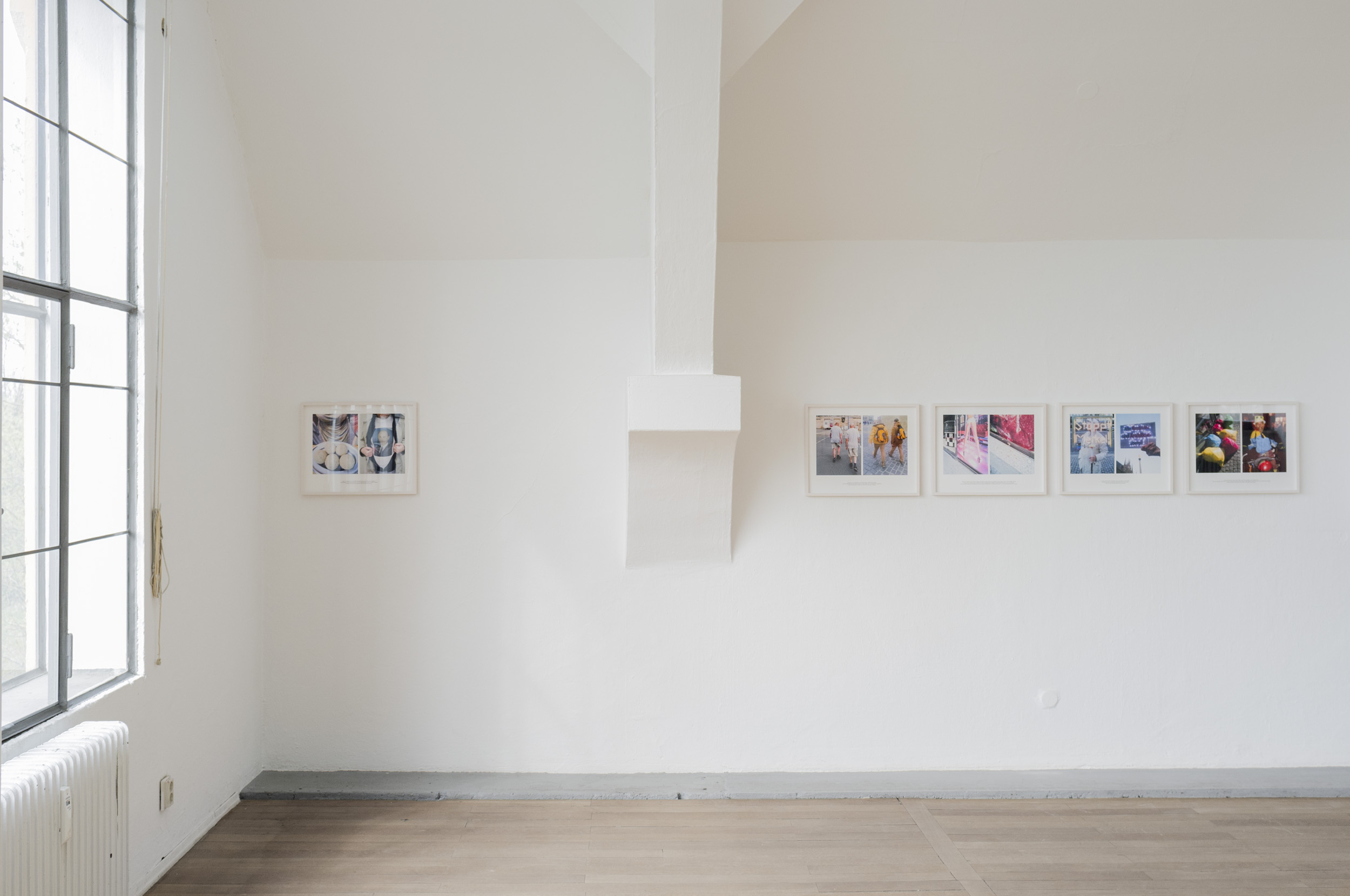 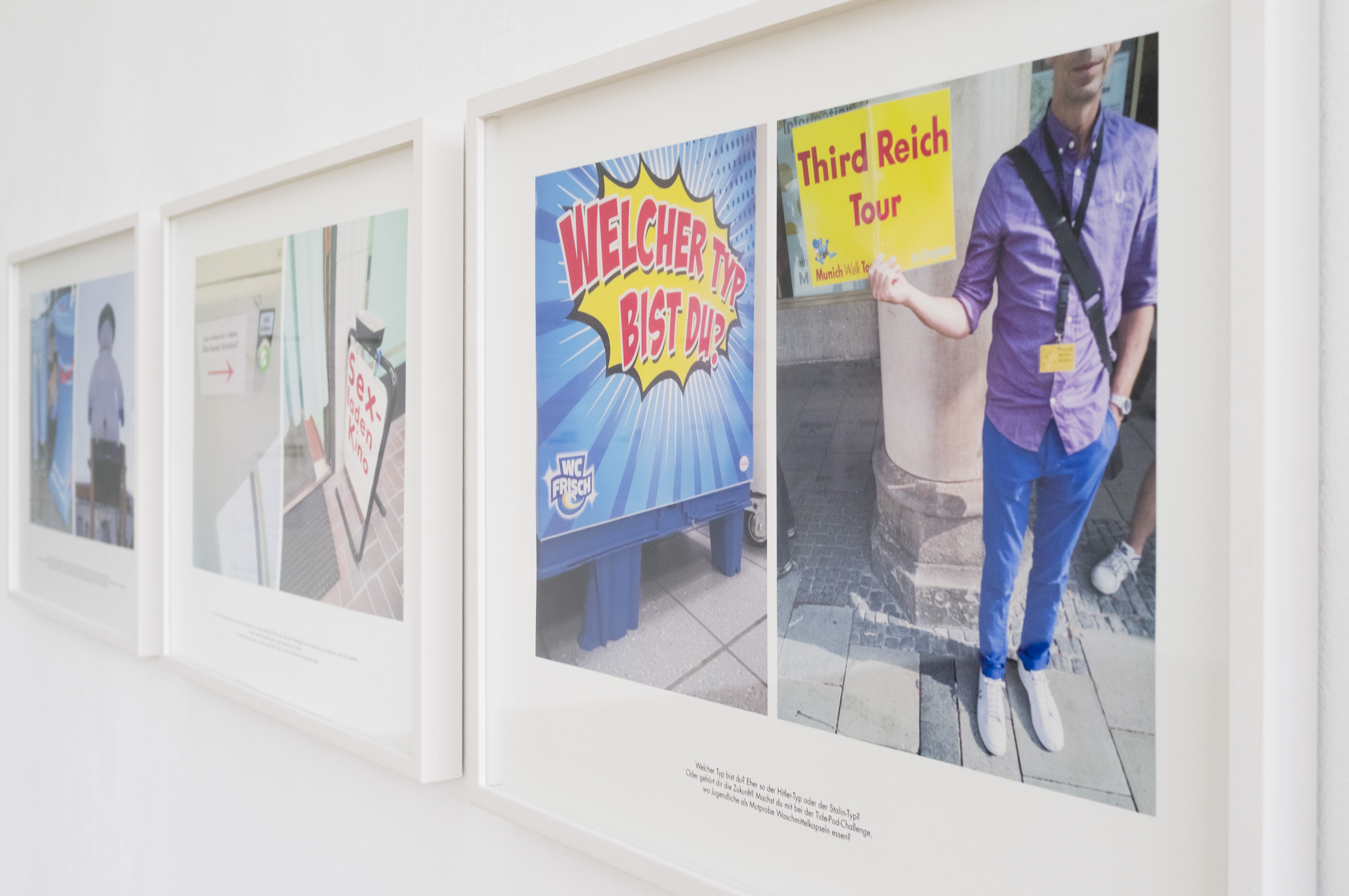 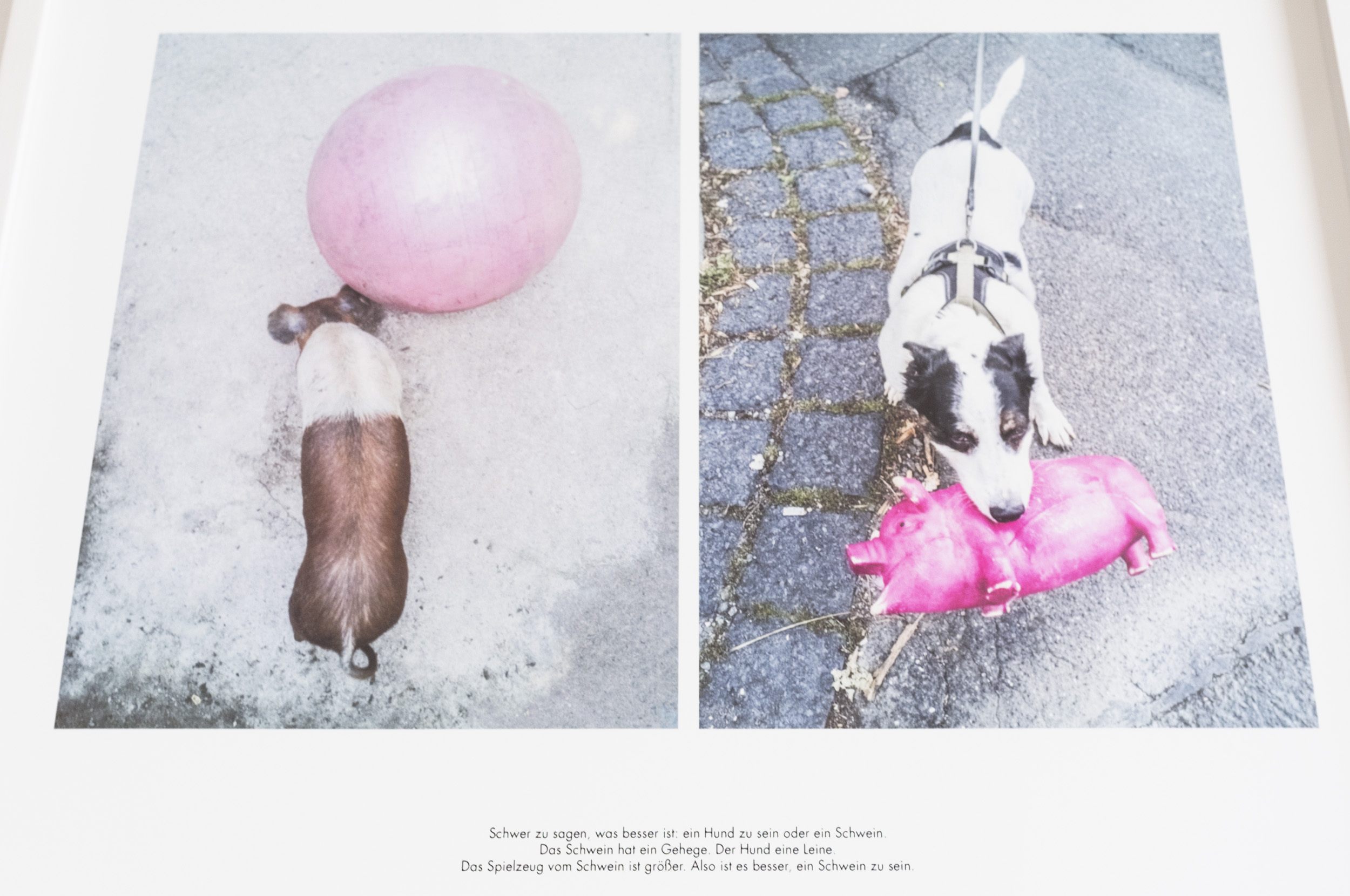 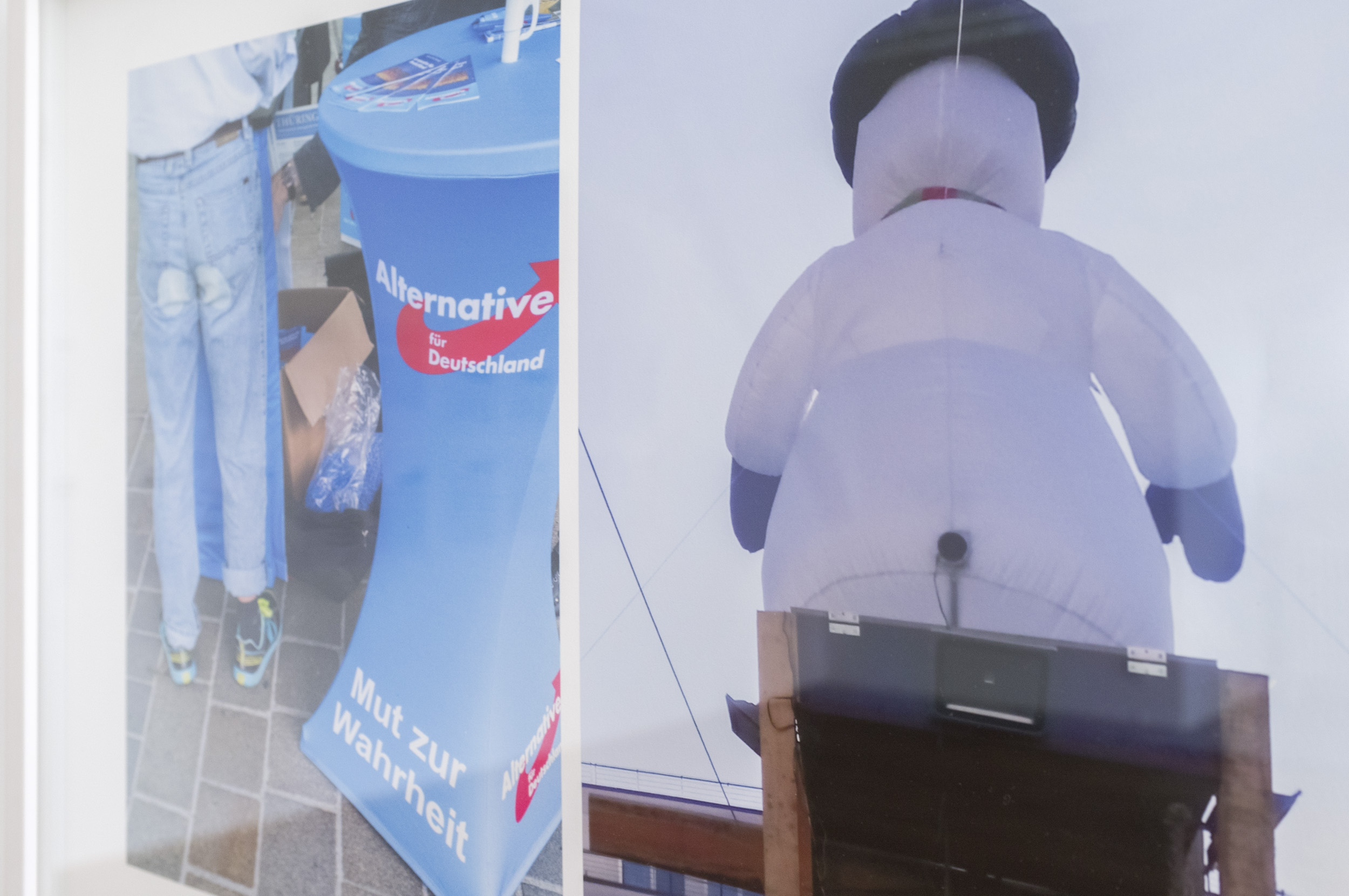 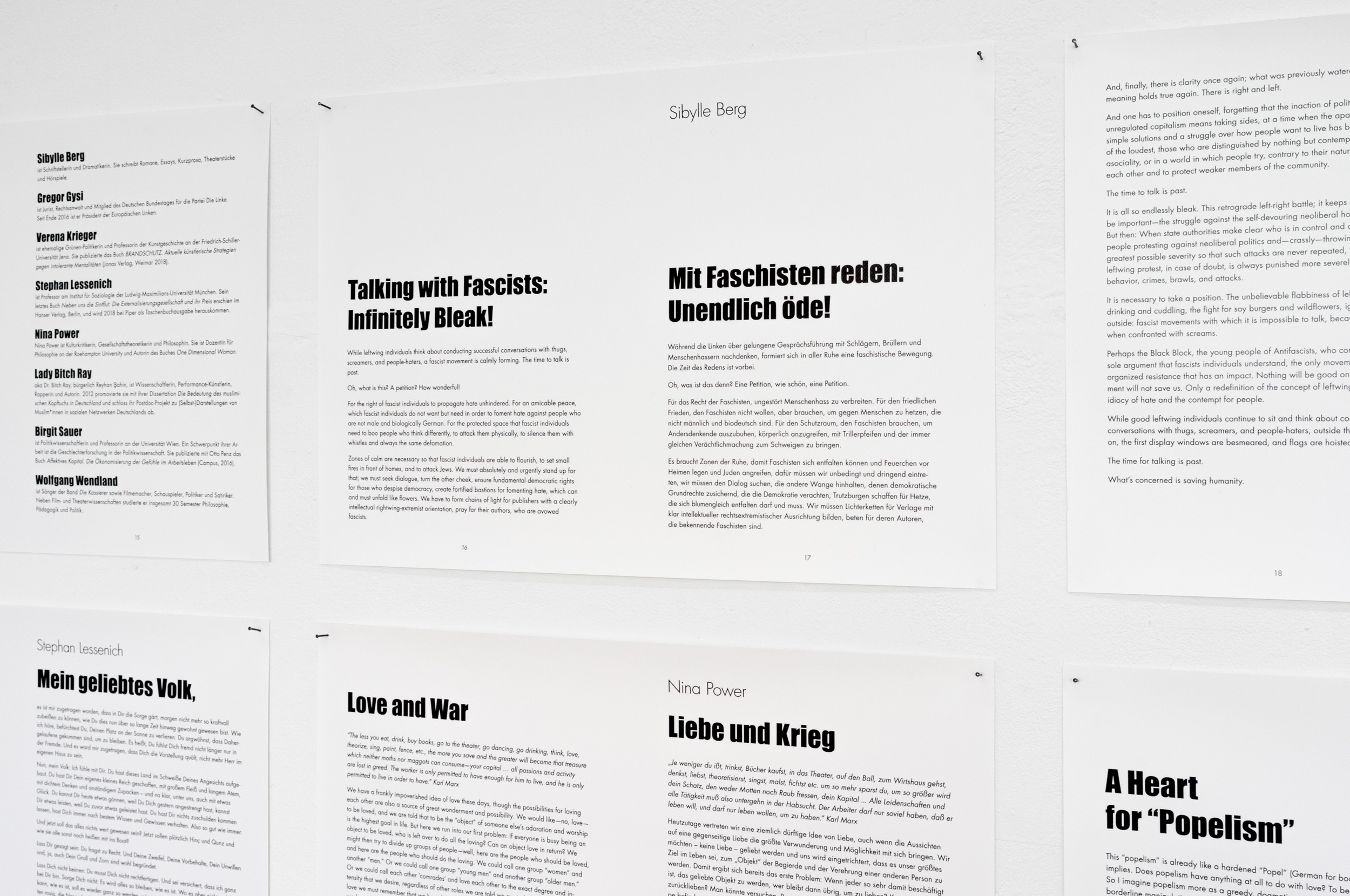 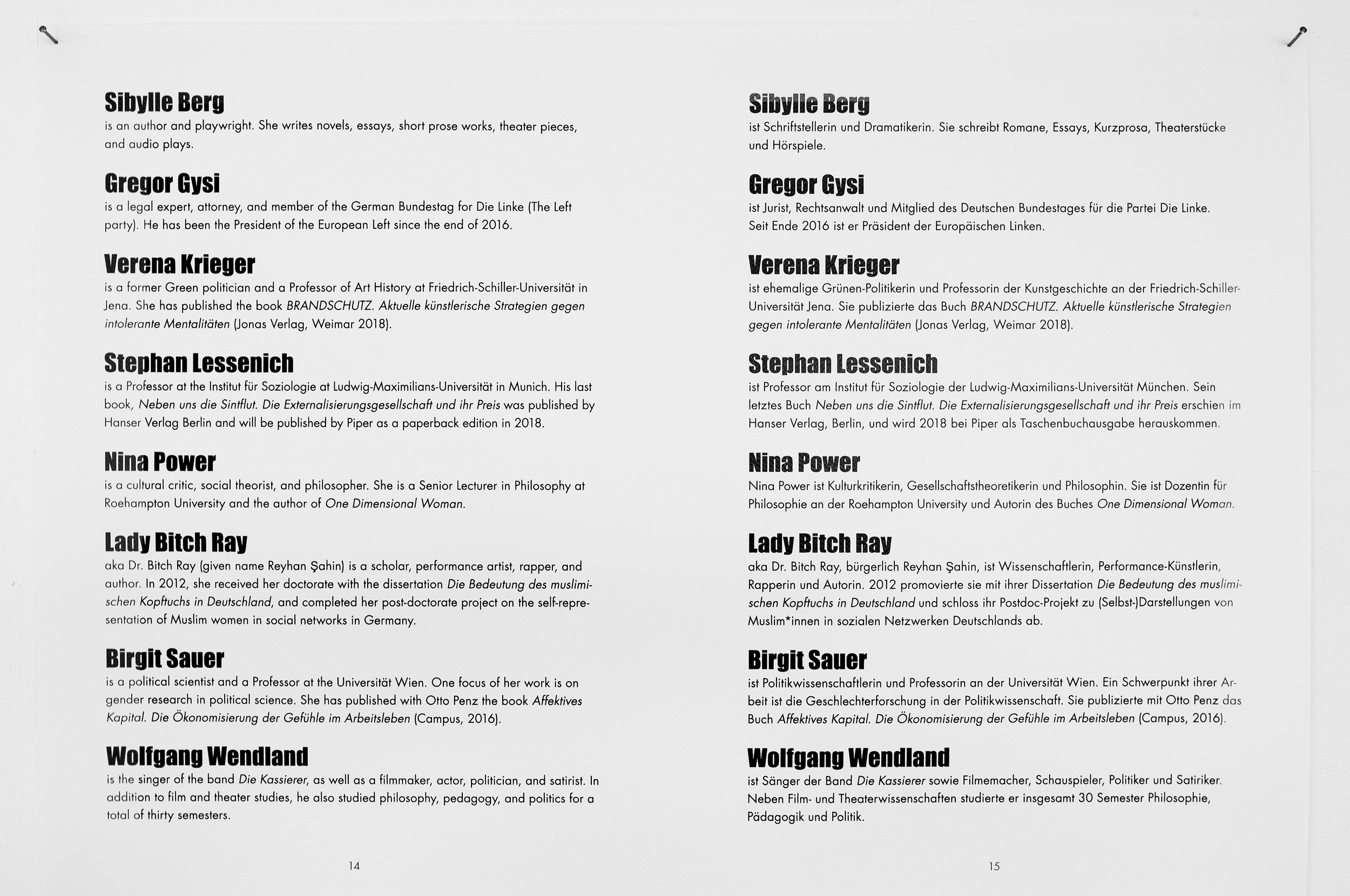 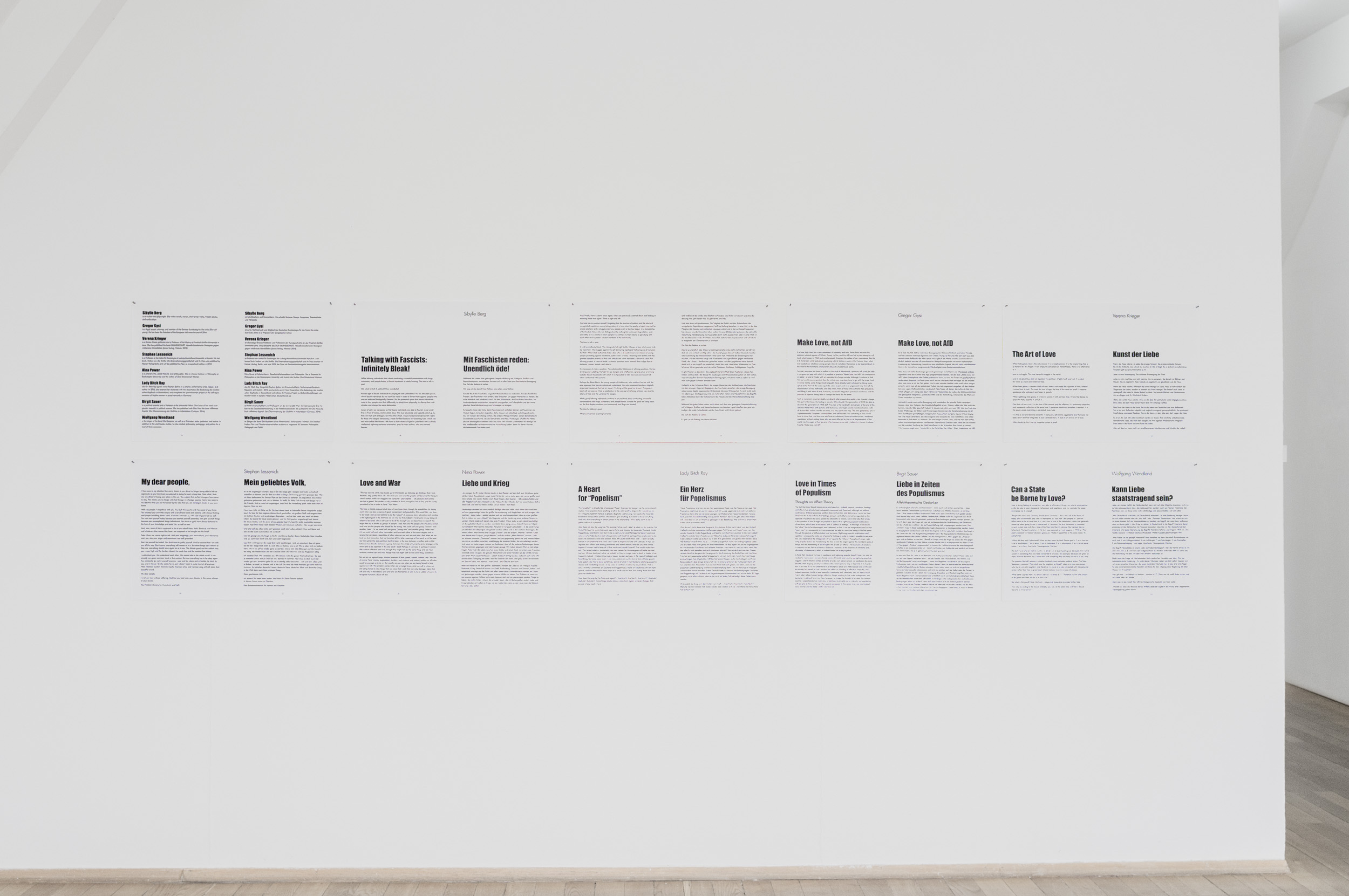 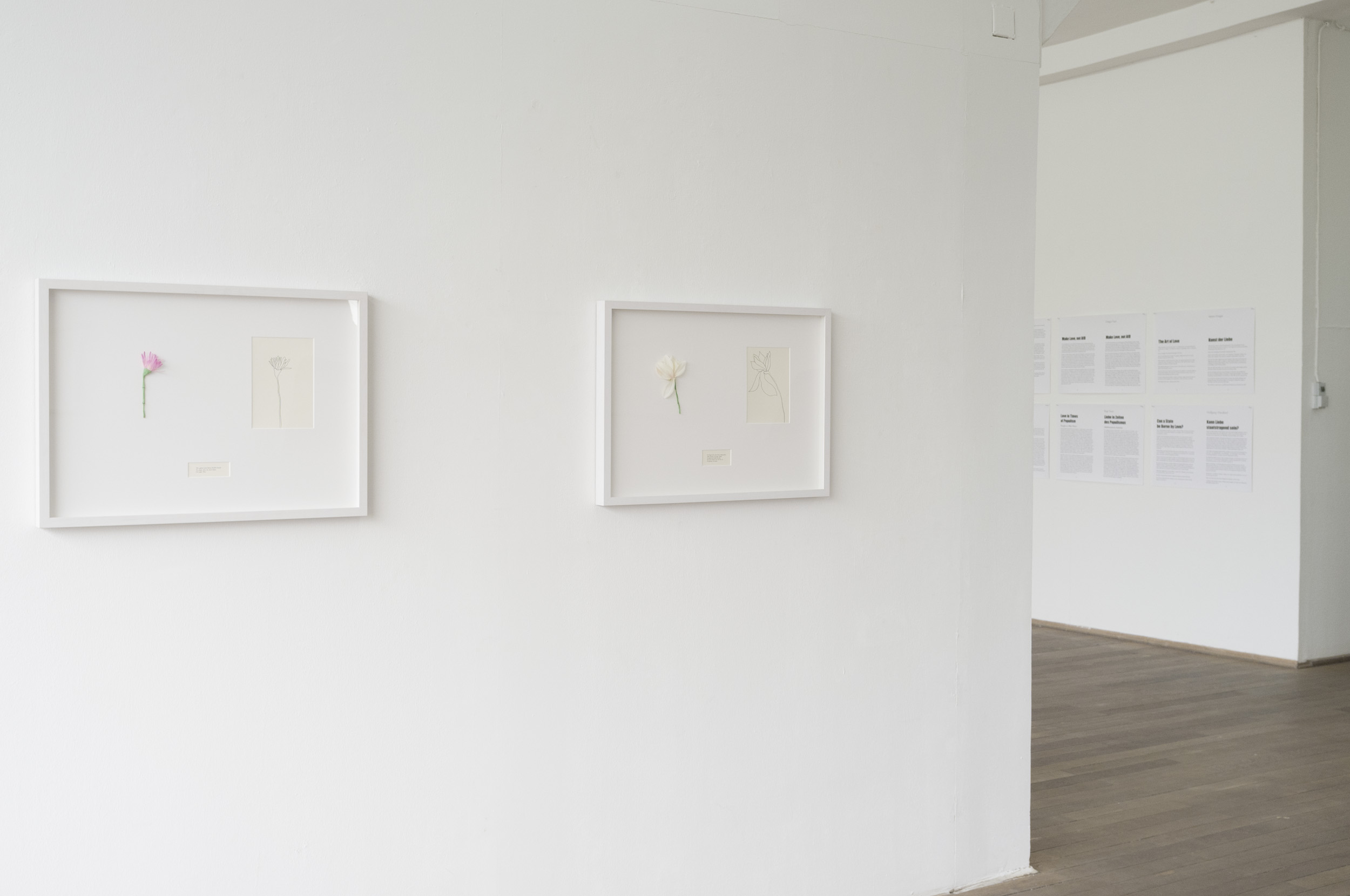 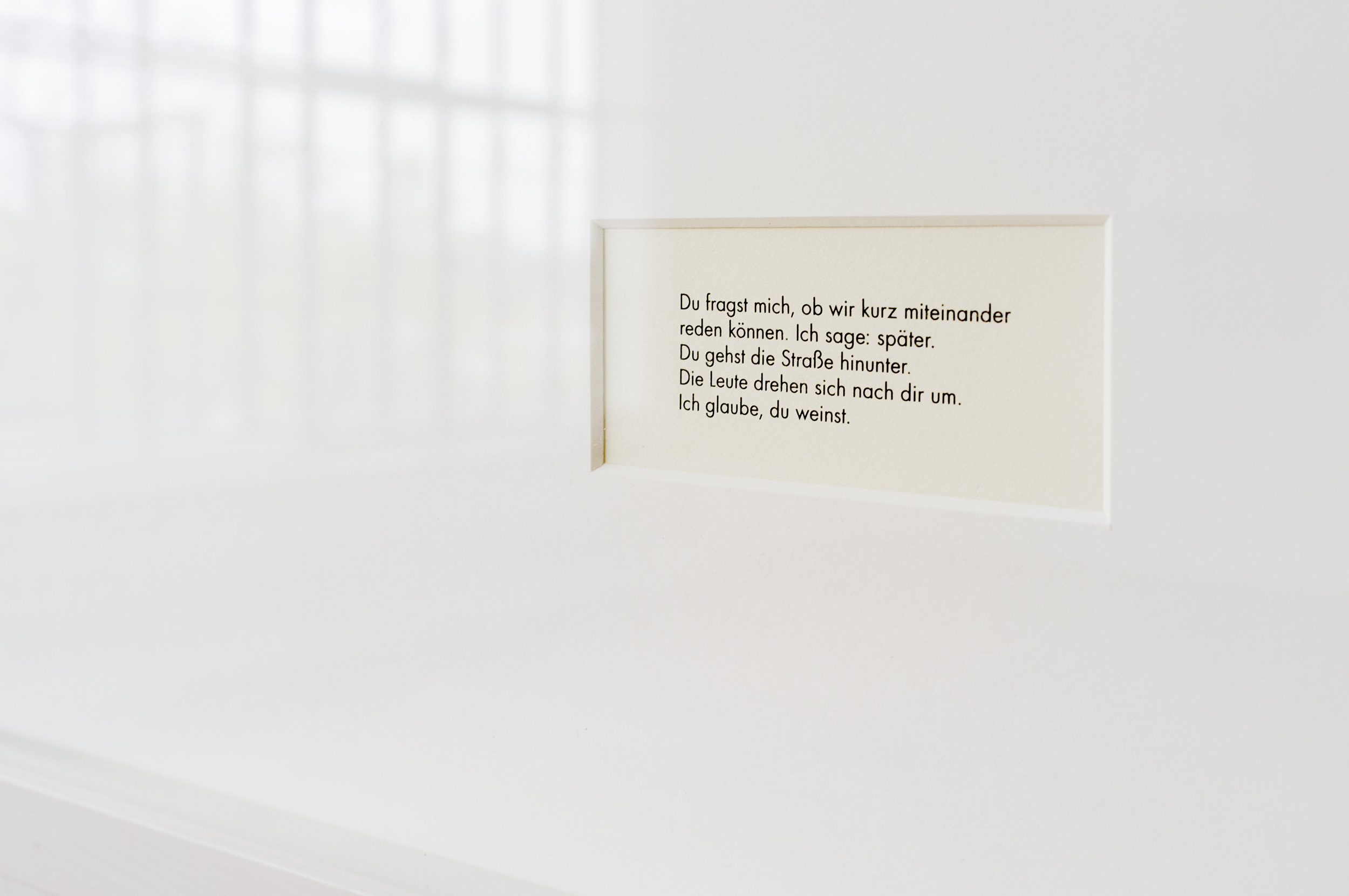 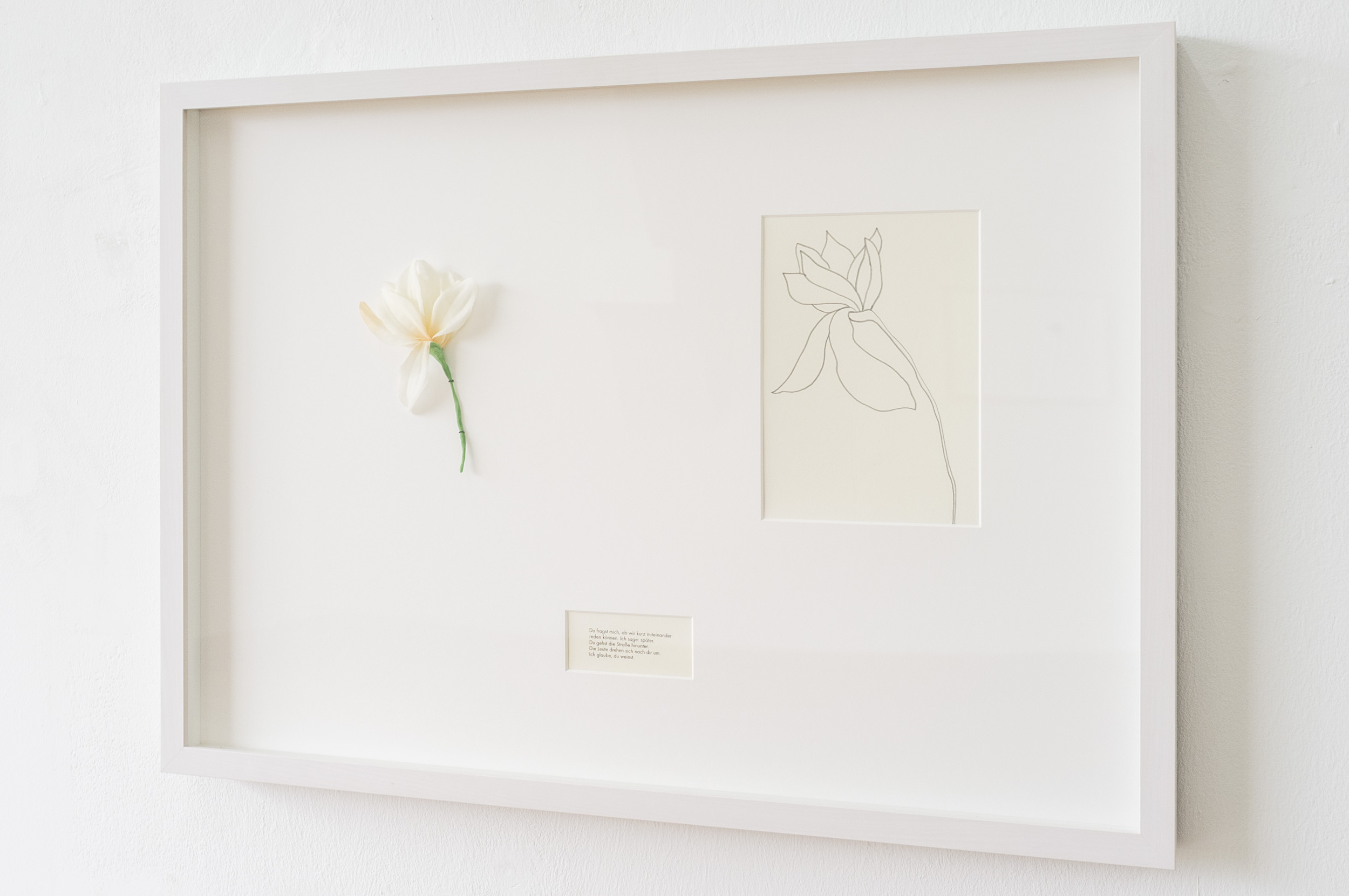 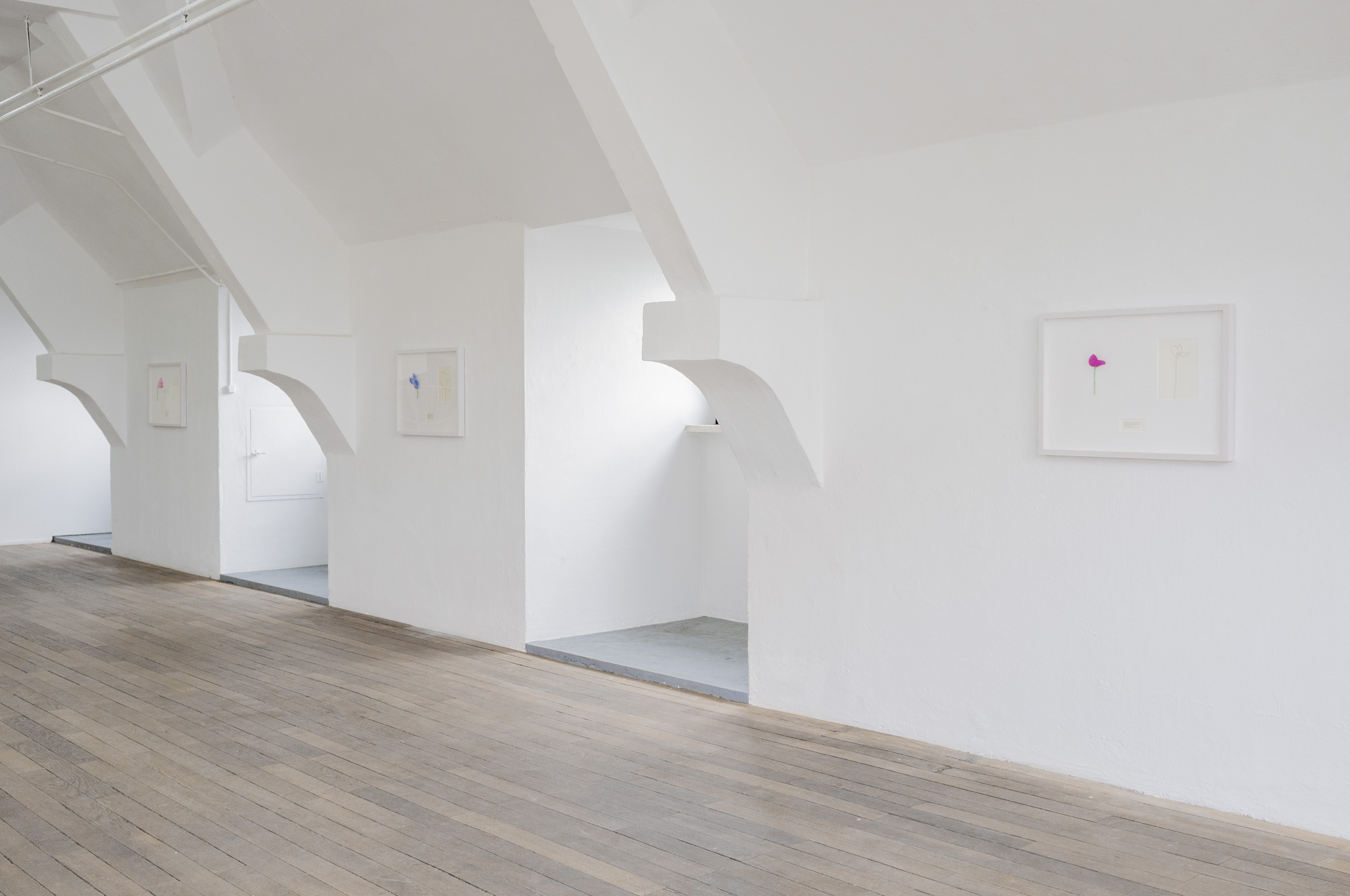 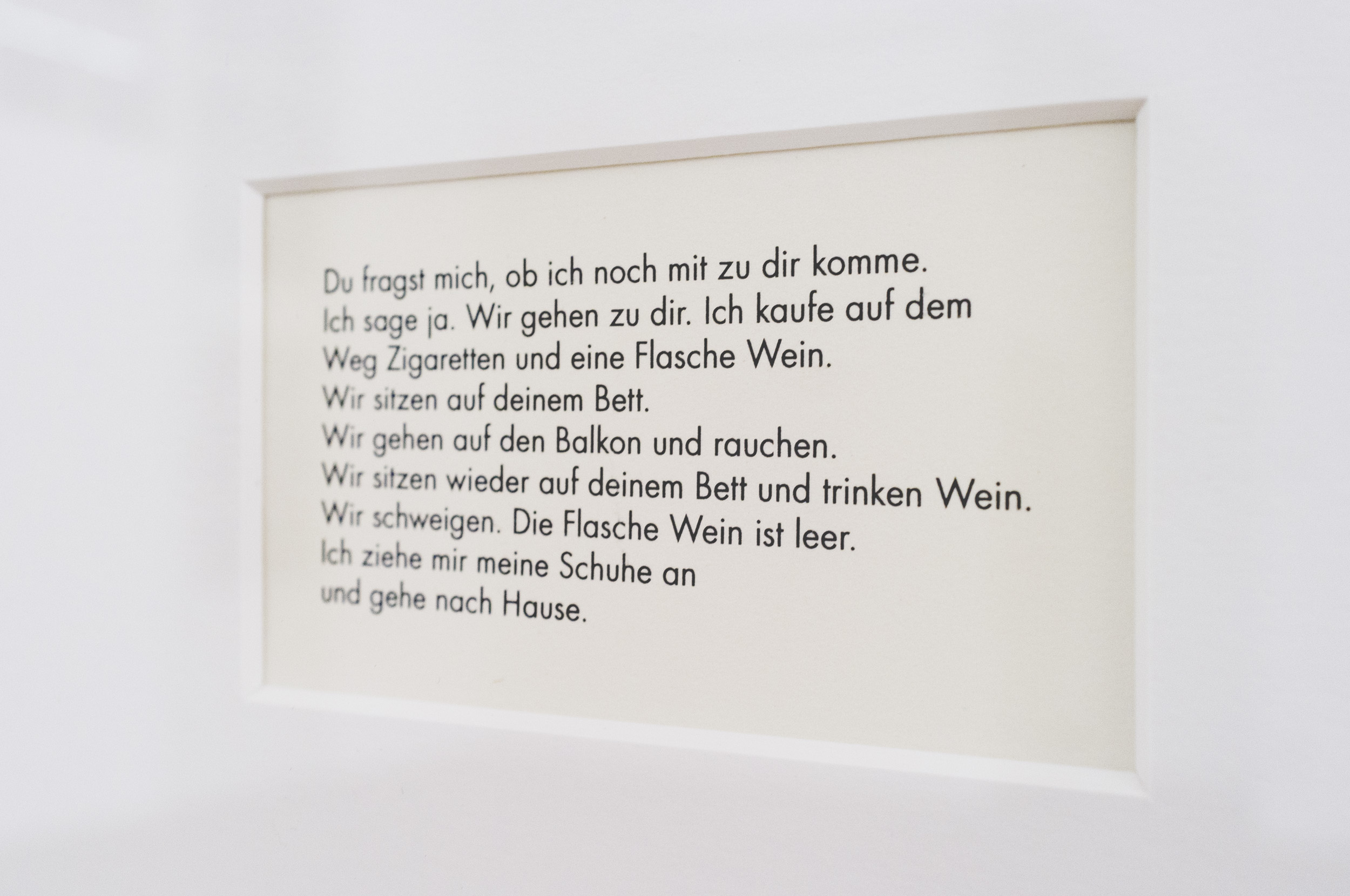 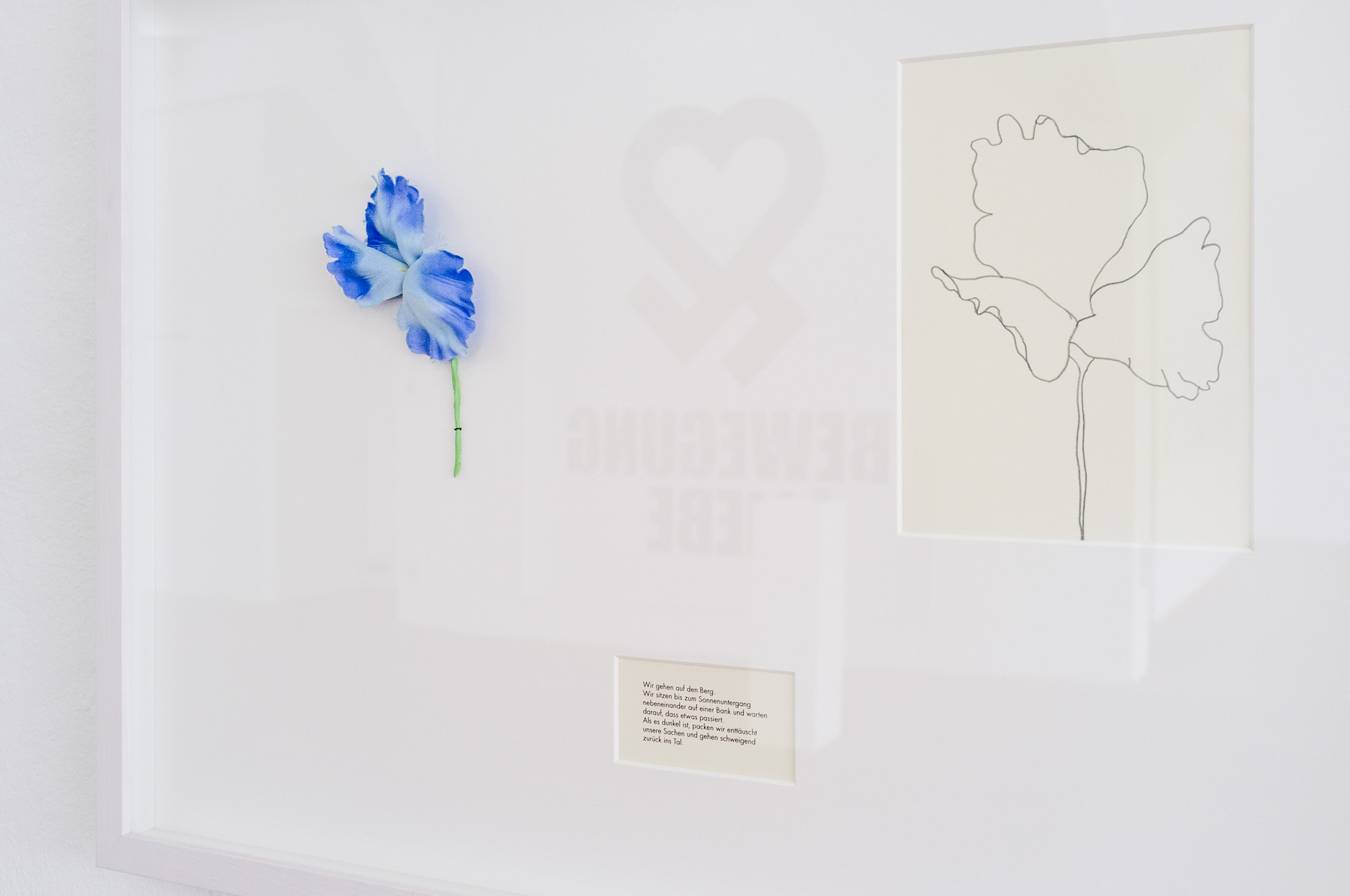 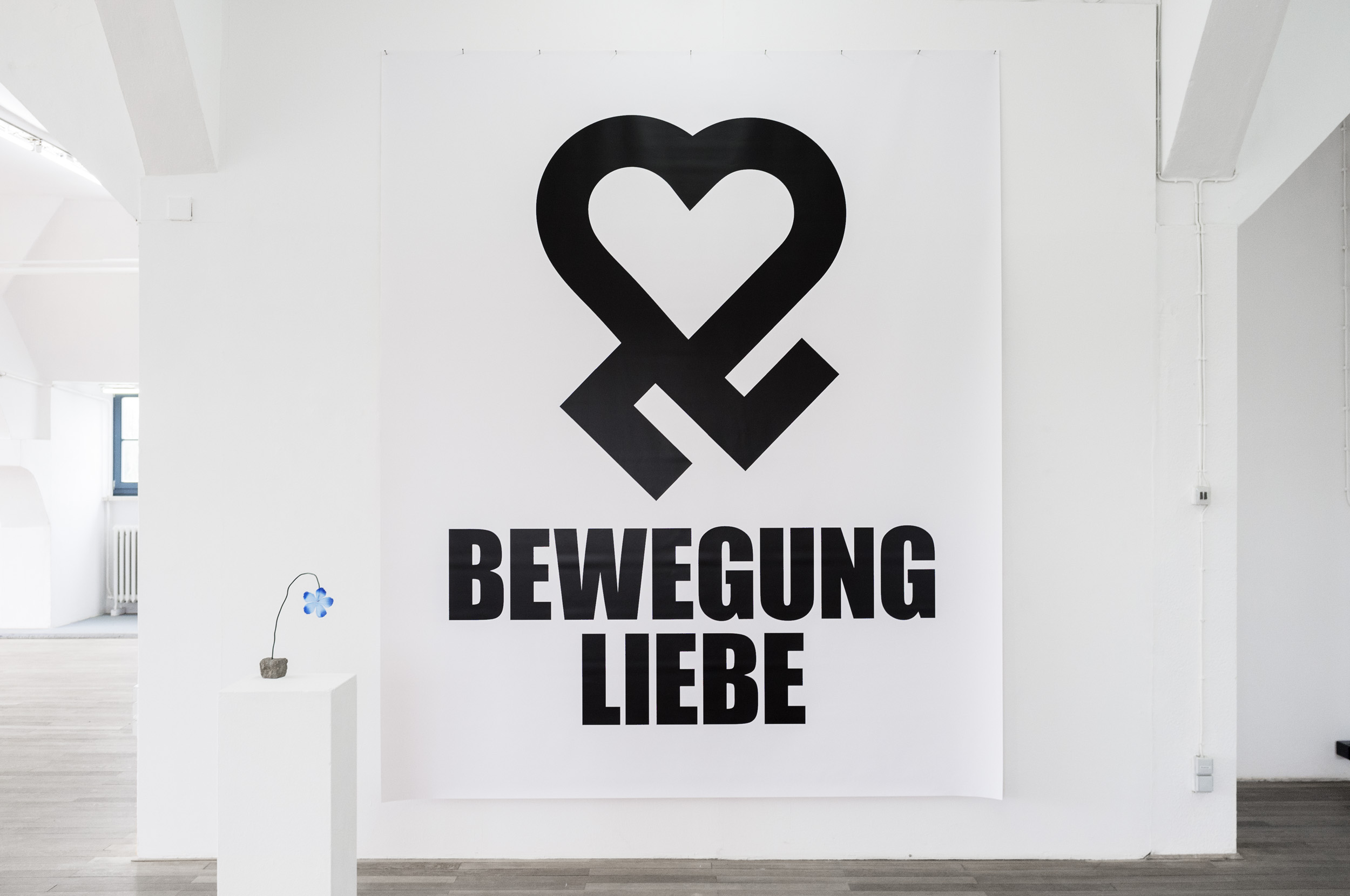 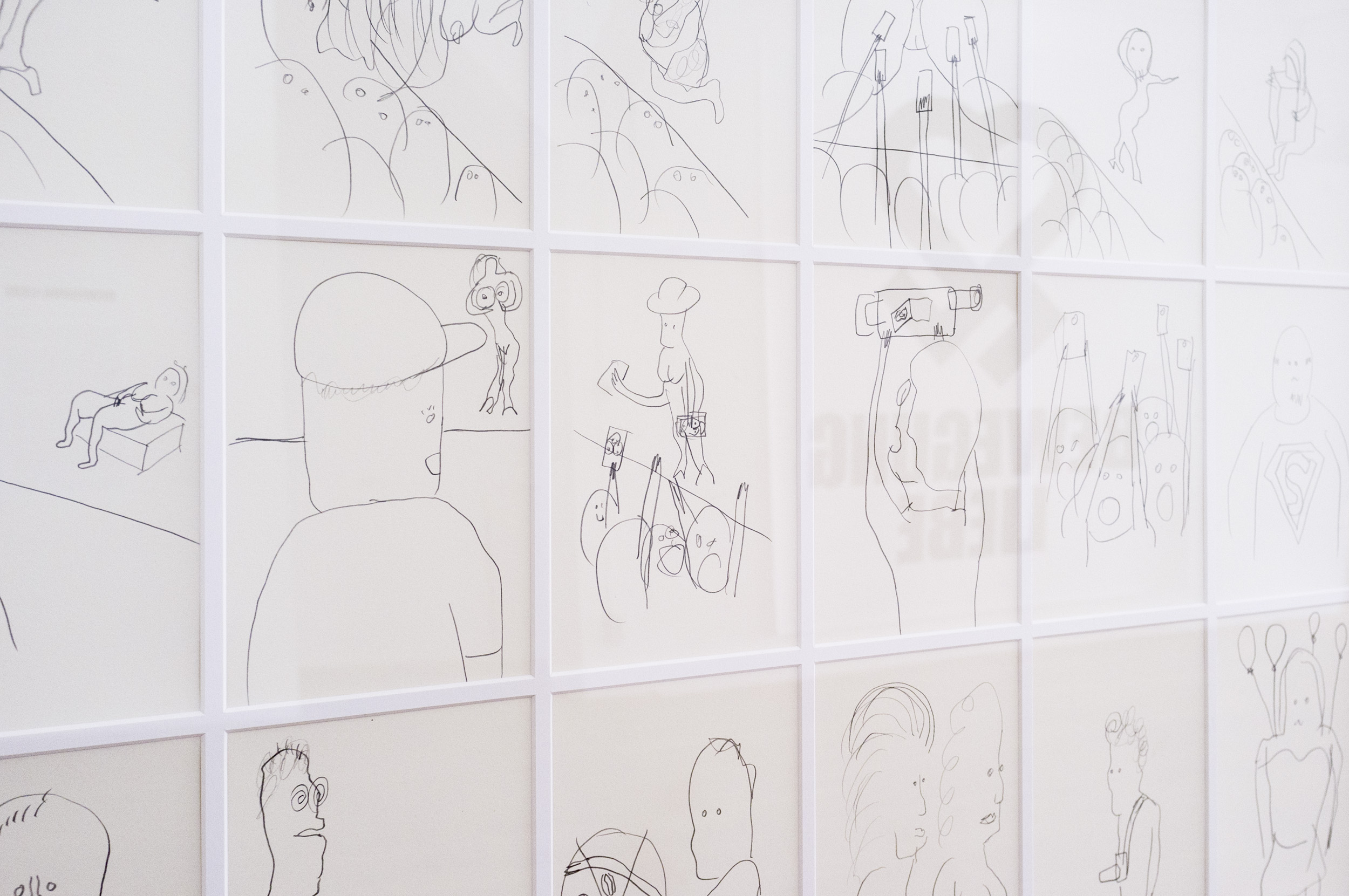 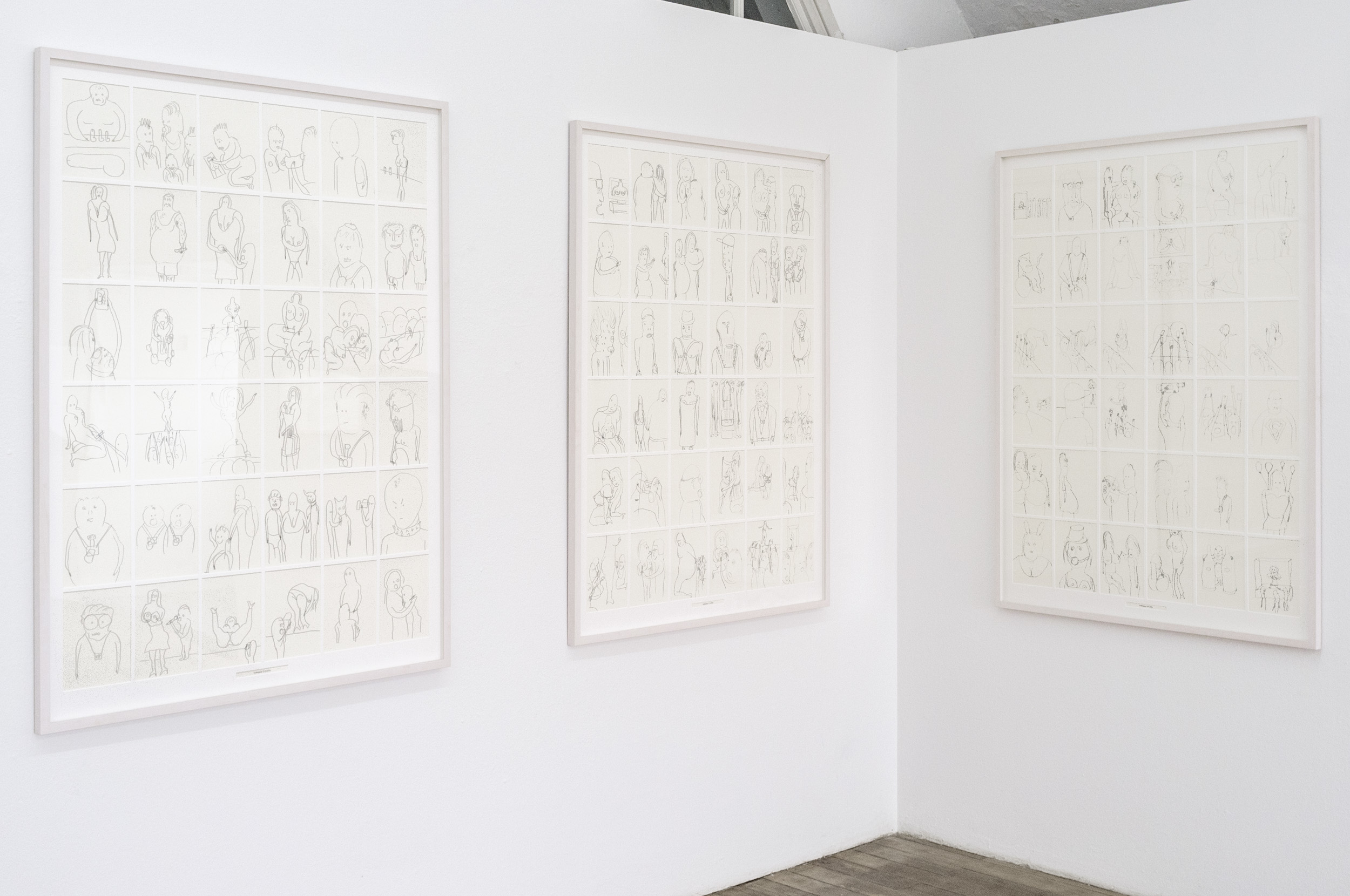 ------Translations-of-the-texts-in-the-installation-views------
You ask me whether I still want to go home with you.
I say yes. We go to your apartment. I buy cigarettes
and a bottle of wine on the way. We sit on your bed.
We go to the balcony and smoke. We sit on your bed
again and drink wine. We say nothing. The bottle of
wine is empty. I put on my shoes and go home.
You ask me if we can talk for a moment.
I say: Later. You go down the street. People turn
around to look at you. I believe you are crying.
----------------------------------------------------------------
Sebastian Jung. Love Movement
"Love is an effort. The most beautiful effort in the world"
Verena Krieger
"Love Movement. Populism against Hate" is an interdisciplinary project initiated by Sebastian Jung for the first time in 2018 at Theaterhaus Jena. In the year 2022, in the face of the war in Ukraine, many aspects that the artist communicates here seem frighteningly topical.
Jung deals with sensitive topics: love and politics. Love is difficult to define, everyone has a different concept of it. It is usually described as the strongest form of affection and devotion, a strong feeling with the attitude of intimate attachment that is not limited to interpersonal relationships. It is a phenomenon that is irrational and idealised like no other. And that is why it is abused by politics. Every election campaign appeals to feelings, every party claims to defend values. At the core of these values, it is often precisely this feeling of selfless devotion that is claimed and brought into opposition to the values of the opposing party, which in the worst case can lead to fear and hatred - the usual mechanism of populism.
Sebastian Jung explores these mechanisms in his experiment. He has designed a logo for his "Love Movement" that shows a heart with feet, reminiscent of a swastika - accidental or intentional remains open. It is an apt satire on the symbolism of totalitarian regimes, which often argue with love - for the people, the fatherland or God - and only ever cause hatred and suffering. Think of the "Z" that has been spread by Russian ideologues ever since.
Jung made an attempt to counter populism with his own means. To do this, he assembled an eight-member think tank from representatives of the visual and performing arts, literature, pop culture, science and politics, which dealt with the phenomenon of love on various levels. They wrote short texts directed against racism, fascism and intolerance of all kinds. Much of it can be read like political appeals. You make propaganda against hate, for love. Perceptive, emotional and not always gentle.
Sebastian Jung adds a manifesto to this exchange of ideas, which is staged acoustically. It sounds like an attempt to define love. It shows how all-encompassing and controversial this concept, this feeling and our ideas about it are: "Love is its own proof and its own contradiction," it says. This contradiction, with often polar perspectives on the same love, causes relationships to fail. And so the manifesto is followed by a conversation between two lovers who can no longer get together because of their differences. It is intimate, touching and sad. One cannot shake the feeling of being an unauthorised witness and yet cannot stop following the conversation.
The artist follows the text with three series of paintings: Artificial flowers, drawings from an erotic fair and mobile phone photos. The drawings are 108 small formats, all made in one day during a visit to the erotic fair in Berlin. Quick strokes, schematic, hard facial features, mask-like facial expressions, affected gestures - elements that are characteristic of Sebastian Jung's drawings. Yet the artist is not concerned with drawing caricatures or denouncing anyone. As Sophia Pietryga writes: "Rather, the area is shown that contains all parts of society: loneliness, sadness, banalities, but also funny moments; Jung does not exclude us, does not delimit us, but shows that the unreflective, need-oriented is what is human".
The mobile phone photos tie in with the themes of the drawings. They are often shot quickly and unnoticed from the hip. They are everyday observations that do not shy away from the supposedly ugly, without moral or aesthetic judgement, but with a critical, compassionate eye. The photos are complemented with short texts that deal ironically with the depictions.
With the artificial flowers, Jung creates an interesting turn in the concept. Plastic flowers are hardly the epitome of fine aesthetics. Kitschy, cheap, garish. The artist rescued a slew of them from the dustbin in an Asian supermarket. He picked them apart, rearranged the flowers and gave them a new sensuality. He then made drawings of these flowers, combining them with short texts reminiscent of a diary of failed love. The work has an intimate character and conveys a vulnerability and sensitivity that is otherwise rarely shown in public, perhaps even more rarely by men. The latter is not insignificant; Sebastian Jung counters clichés of masculinity in many of his works. In "Love Movement", hurtful, but also wounded and vulnerable masculinity is addressed on several levels, not only in the art flowers.
For the exhibition at Kunstverein Rosenheim, the artist has designed a sculptural work. An artificial flower with a wire stem that seems to grow out of a paving stone, a stone that was thrown during a political demonstration on 1 May. It is a work in which love, politics and populism come together on a symbolic level.
Dr. Olena Balun, curator and art historian
Philipp Stähle, visual artist and author
Tags Kunstverein Rosenheim, Sebastian Jung
Newer Post Older Post Home