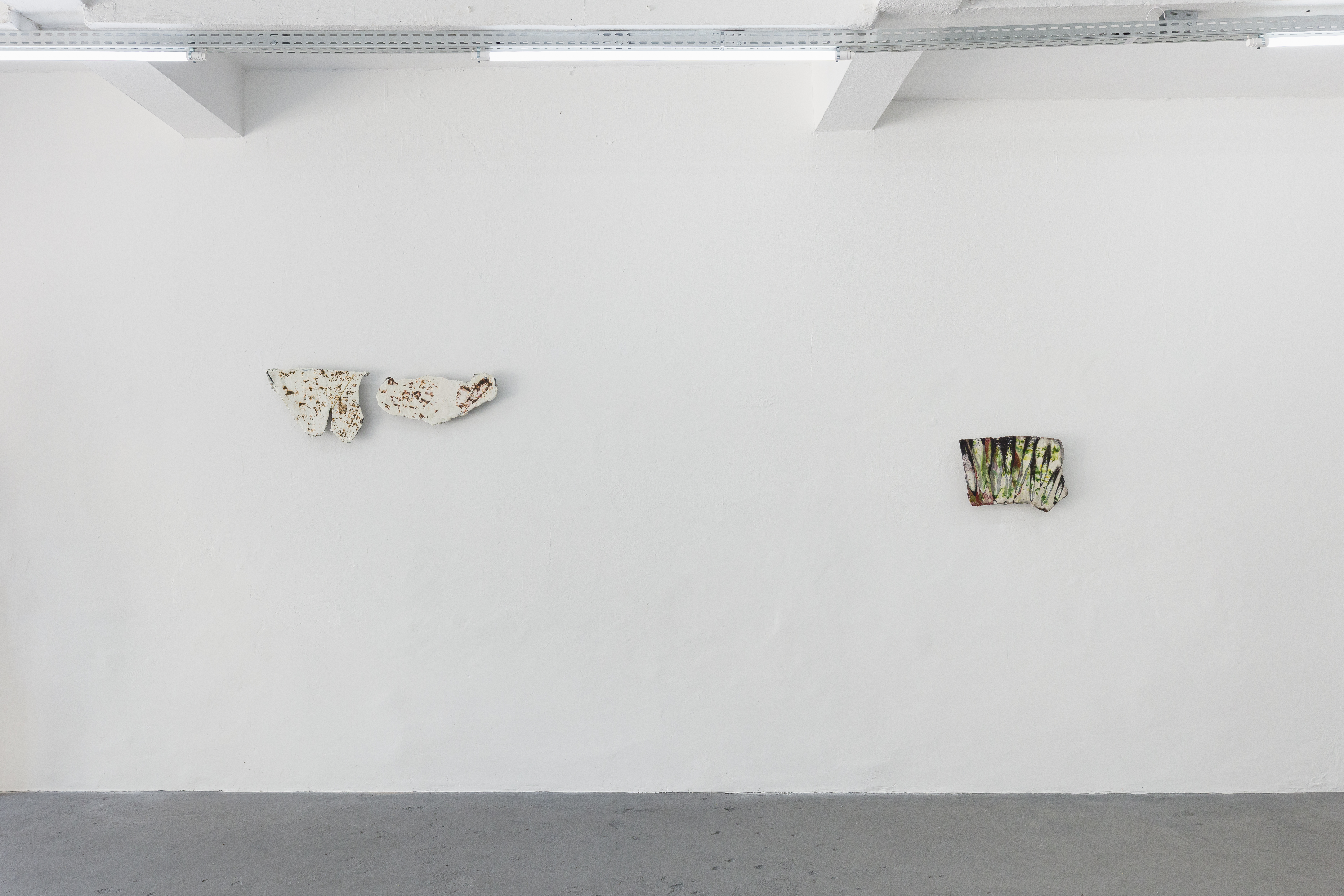 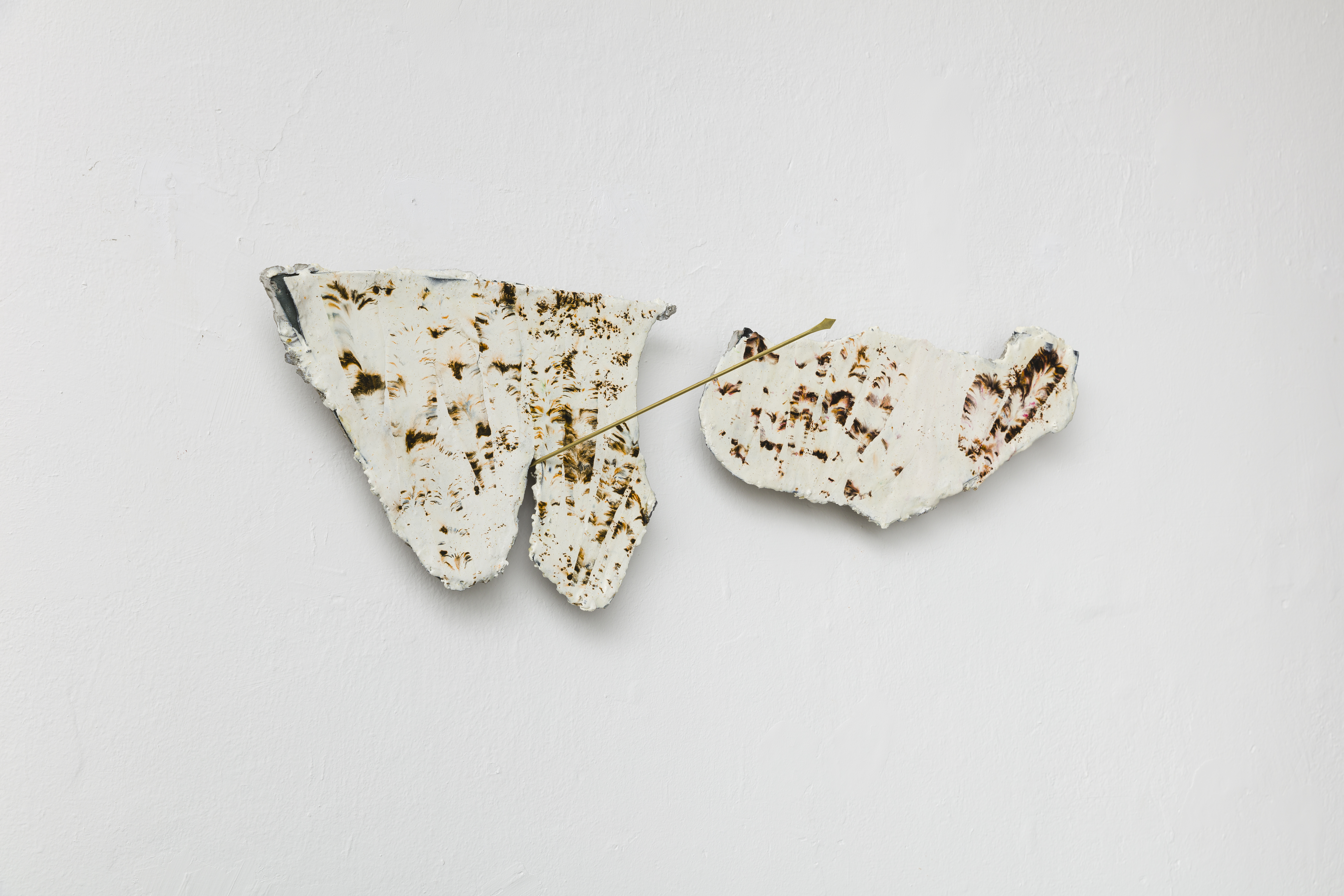 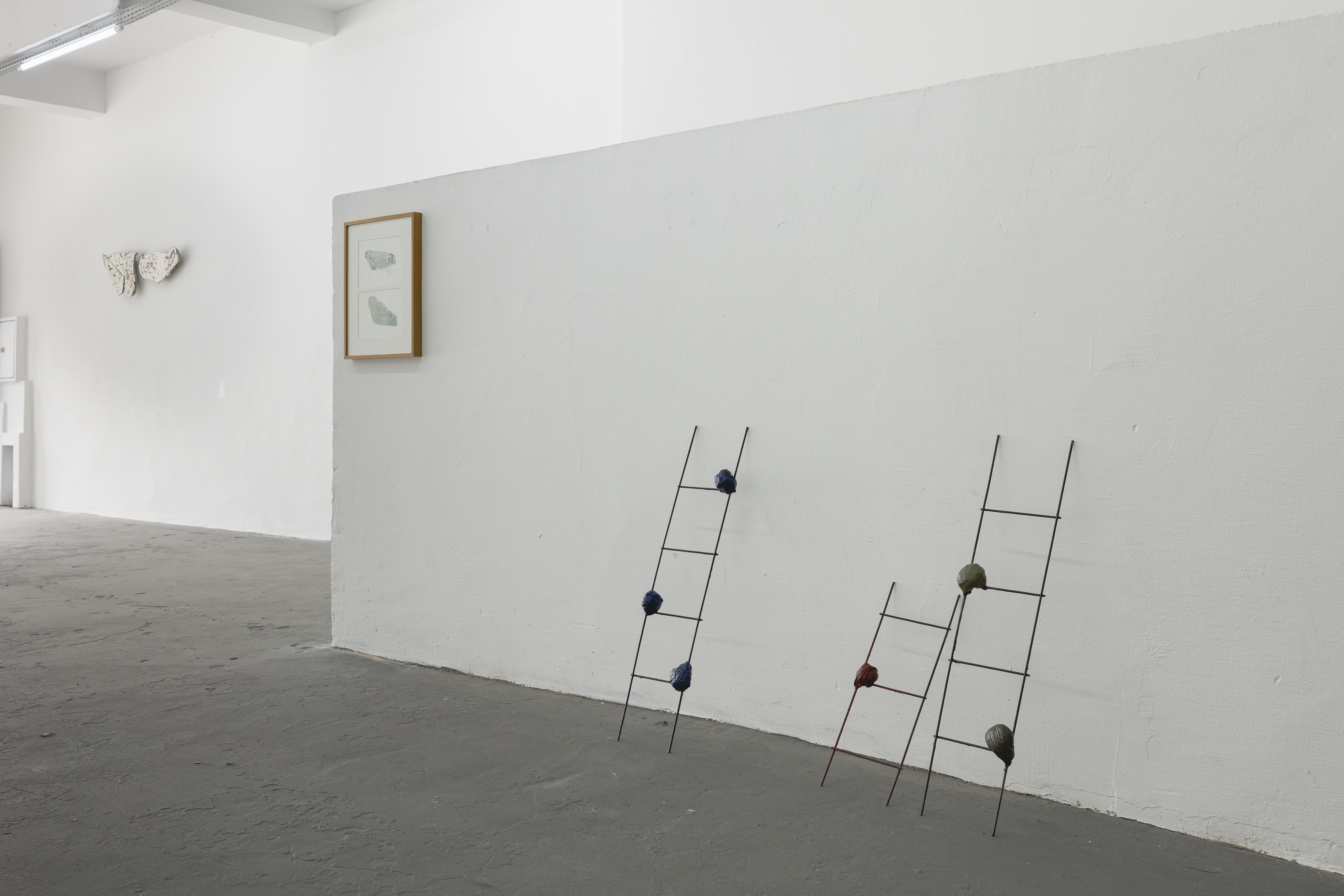 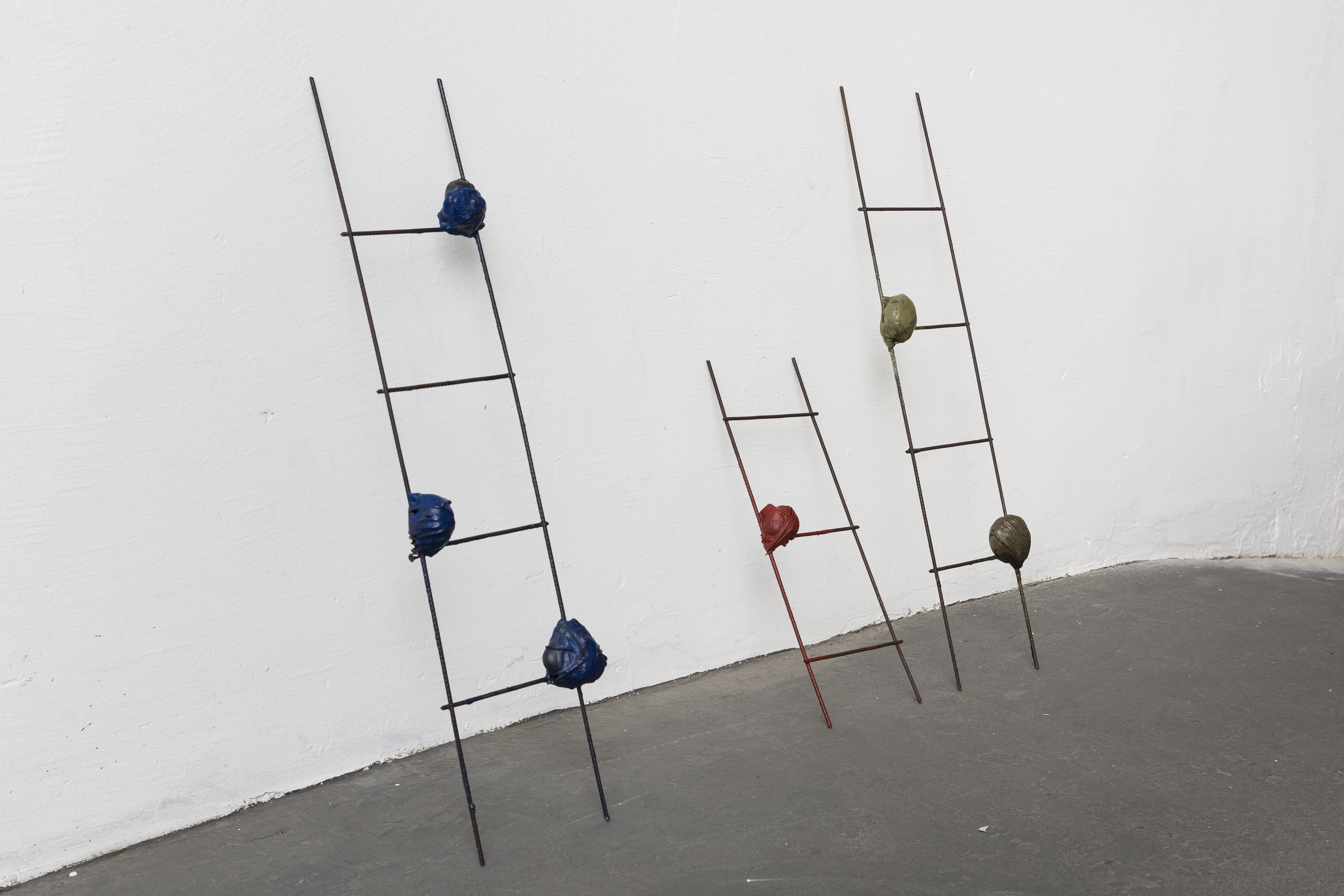 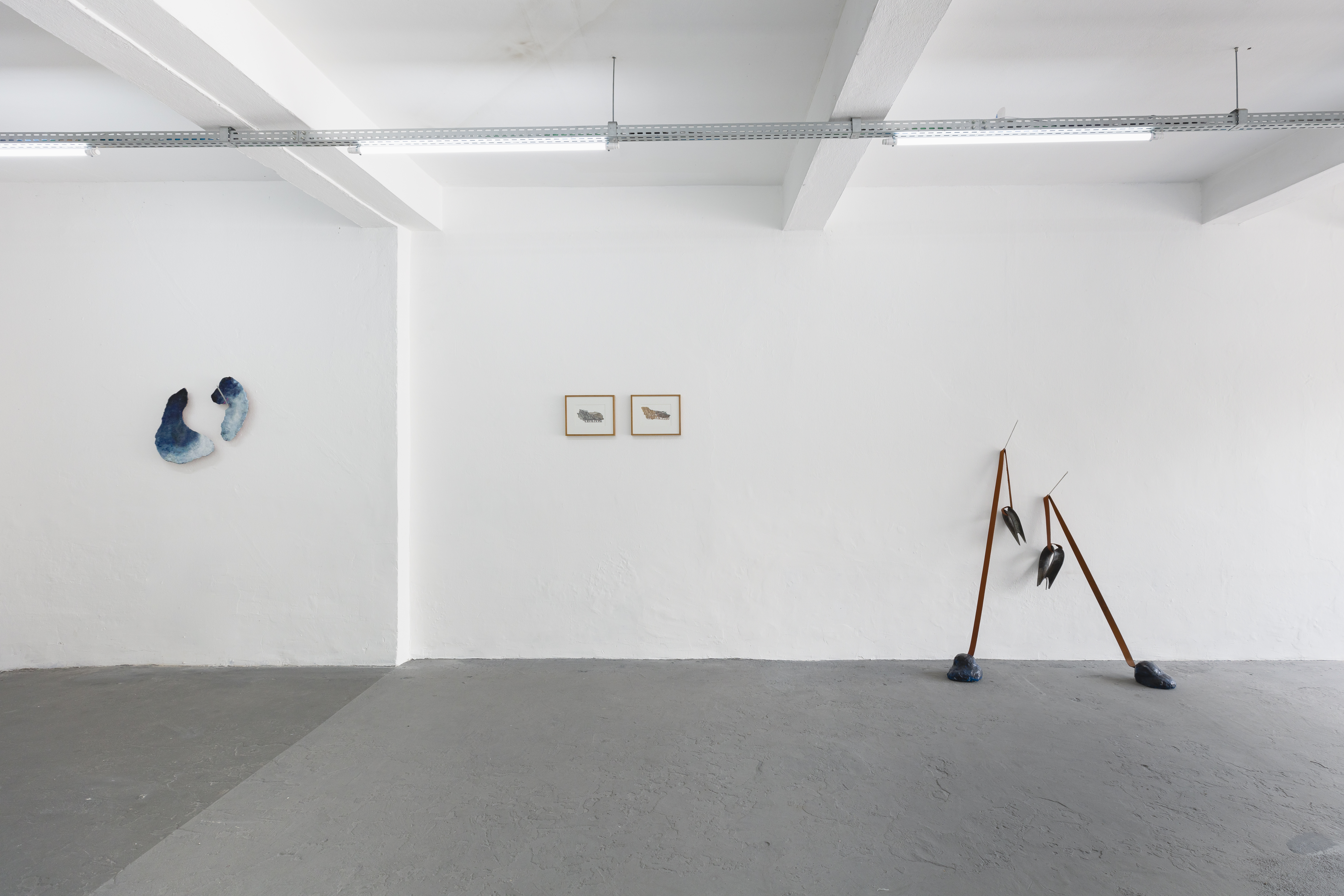 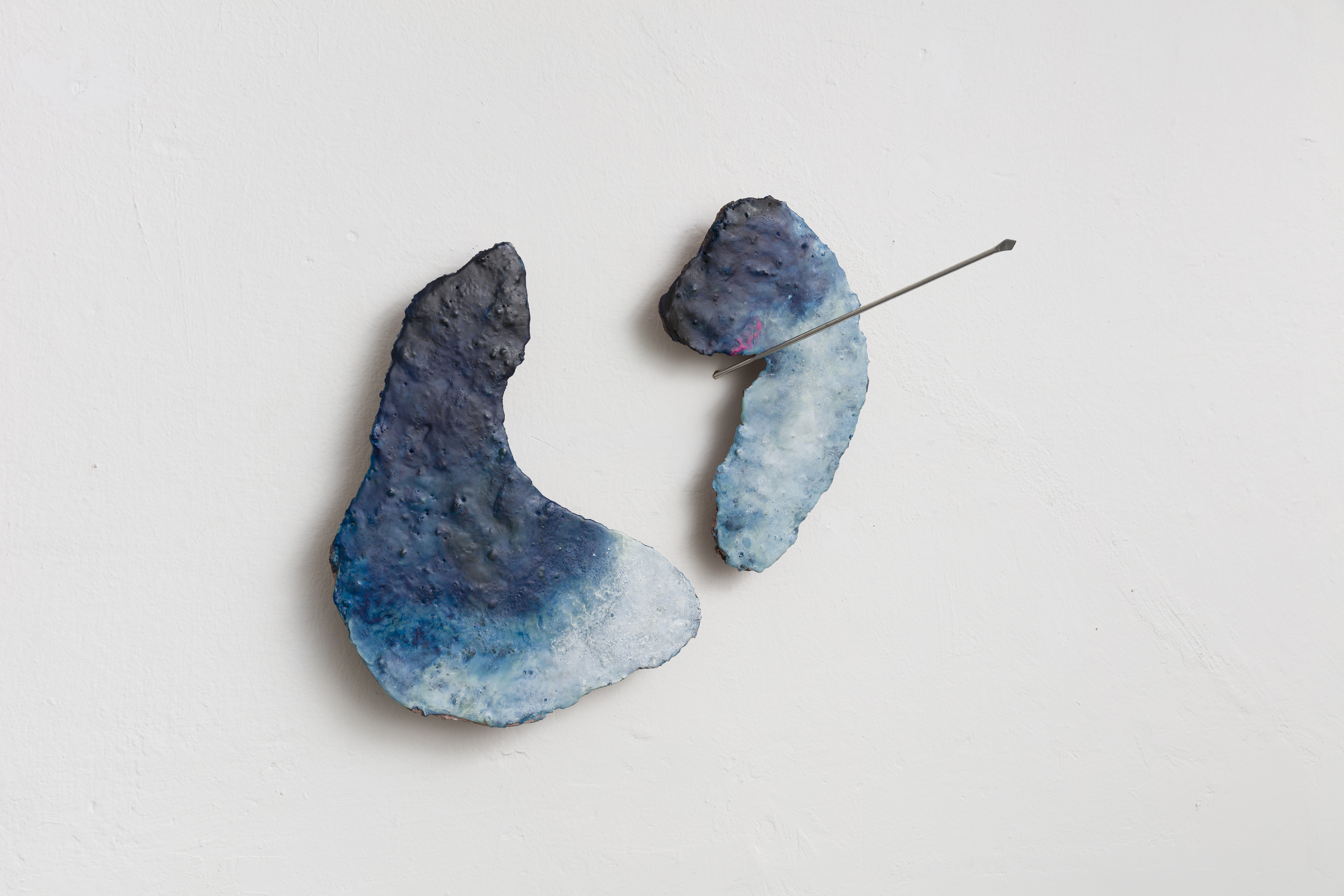 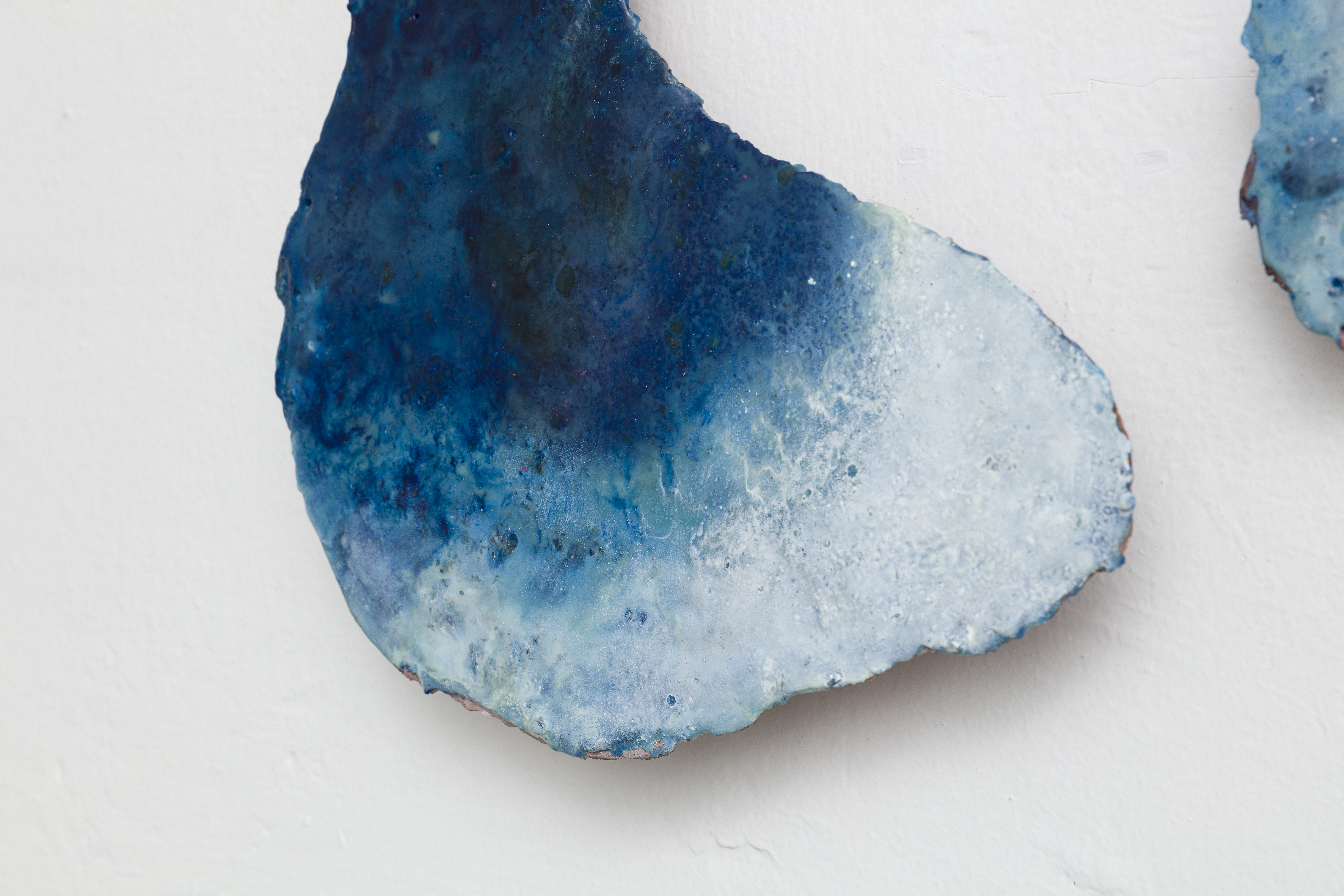 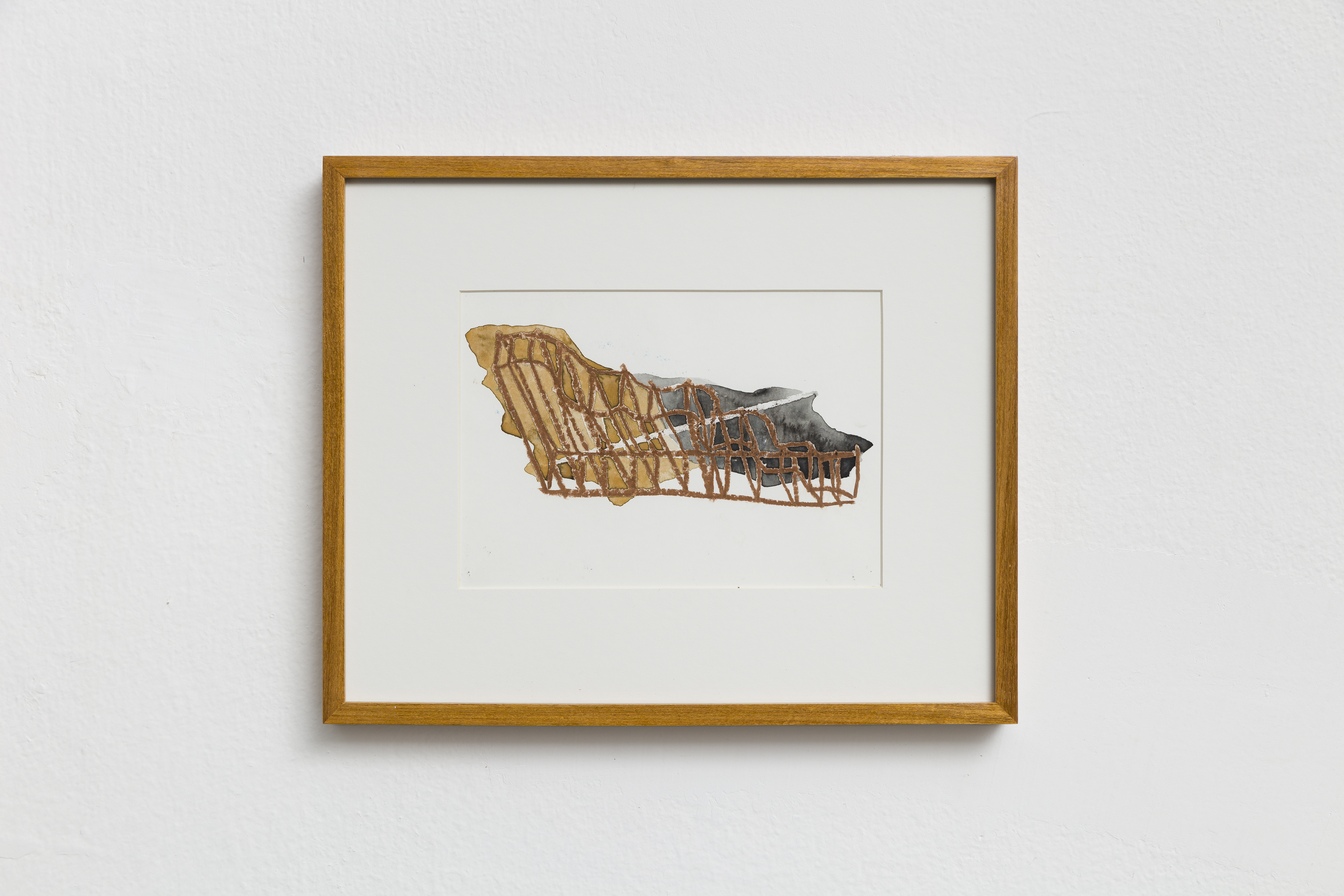 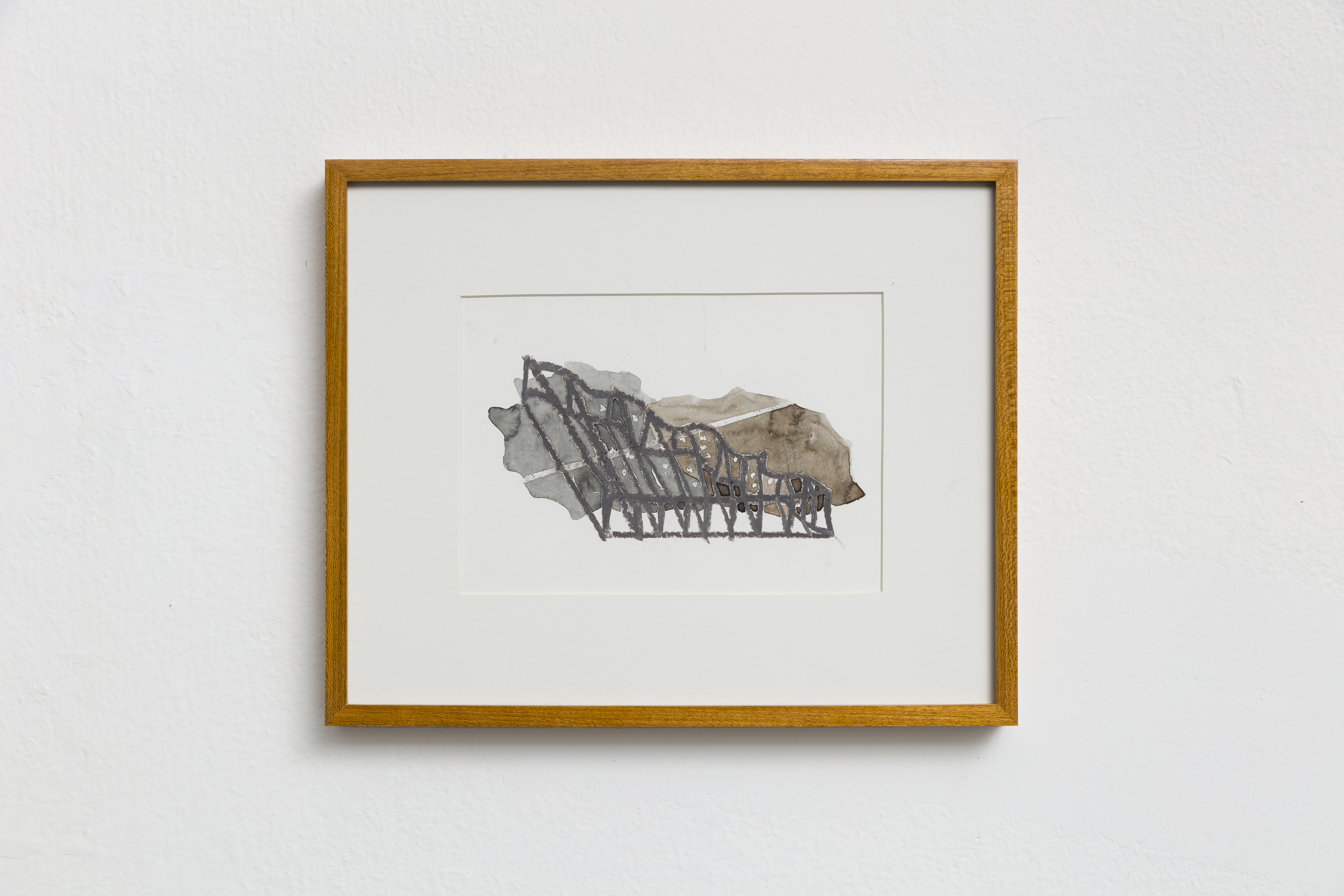 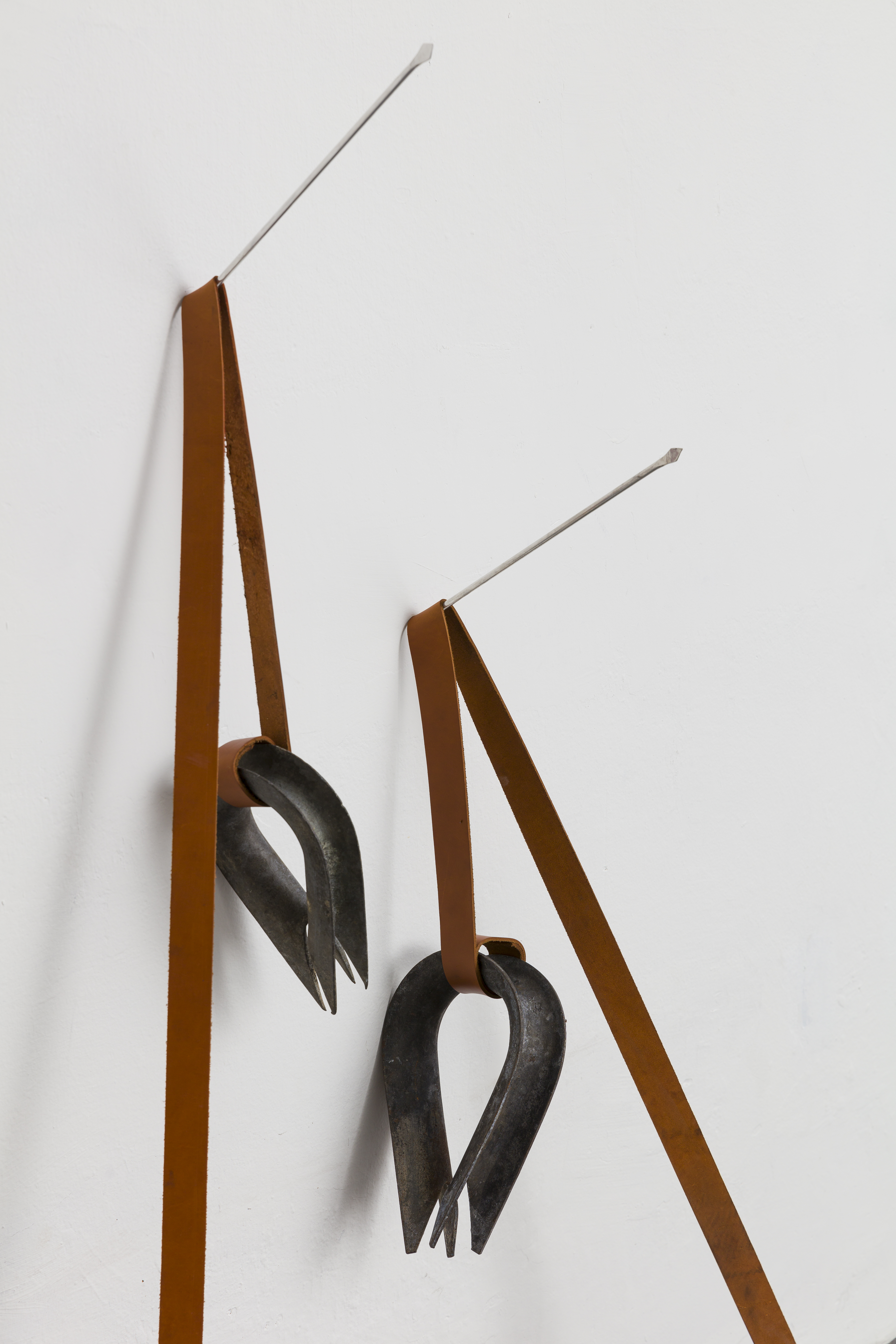 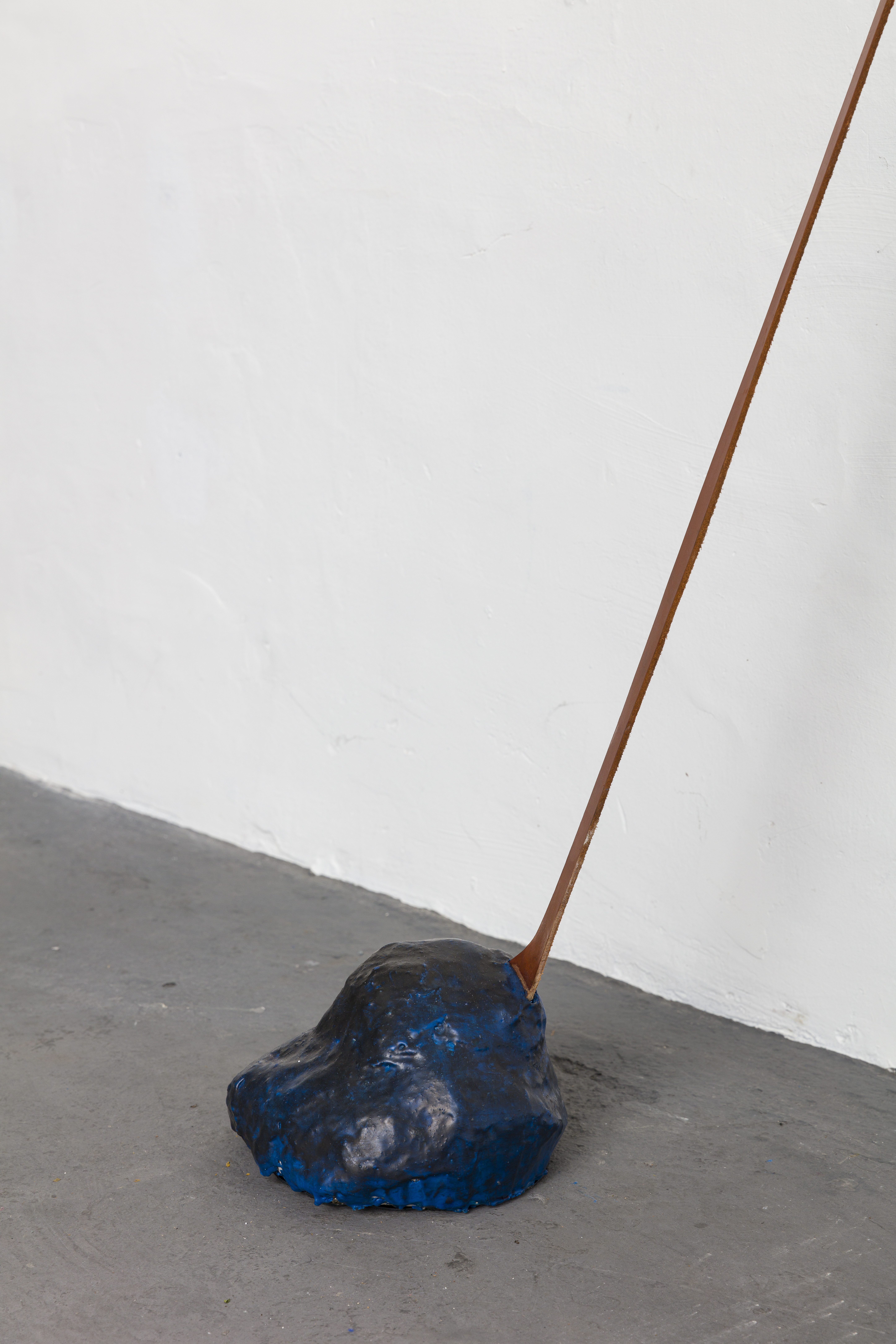 All images courtesy and copyright of the artist and space. Photos by Ana Pigosso.

Encrustation. This is the conventional name for a technique of Roman painting that, found in the 18th century between the ruins of Pompeii and Herculaneum, consisted of a visual device to make one material appear as another.

As its ruins testify, in many of the houses that boasted the famous paintings, what looked like marble was, in fact, a limestone stone. Ordinary rock appeared to be its metamorphic cousin – elevated to the exceptional category of marble because it had been exposed to high temperatures – because of the way it was painted. On its surface, sparse and colorful brushstrokes simulated the plasticity of marbling, evoking the visual effects of a single spectral heat.

When discovered, such paintings were known to be frescoes. With the passage of time and the advancement of research, it came to the understanding that, in addition to being made on wet plaster, many of them were also produced by means of heat. Through encaustic – a technique that combines wax, pigment and heat – and the protection of the solidified lava from Vesuvius that for centuries remained deposited on them, the paintings have reached the present day in a surprising state of conservation that is therefore indebted to the heating that marked them.

In addition to historical evidence about Roman culture, the rocks and their inlay painting from approximately 3 centuries BC. are witnesses of the traditional relationship between art and transmutation. Horizon of alchemy, subject of countless sciences and concept of so many spiritualities, the conversion between subjects and states was and remains as a rich territory of investigation for art.

No wonder, in his recent production – now included in the show birds and stones –, Gilson Plano, an artist born in the Brazilian central plateau, resorts to encaustic. On agglomerates he forged in concrete, he applies successive layers of wax and pigment, patiently heating them with a blowtorch. In doing so, he paints with fire and, in addition to producing an organic and almost velvety look, he also engenders a durable material.

Mostly called birds, Gilson's pieces are not intended, as in the Roman inlay, to appear to be what they are not. Far from any naturalistic appeal, they are nothing like birds and, heavy, embody the stubbornness of physics that, in an ambiguous agreement with gravity, makes things remain in the air despite their irrefutable tendency to fall.

The fact that they do not forge any material otherness does not imply, however, that these works are not disguising what they are. In this mistaking lies the silent gesture of the artist who, between concrete and encaustic, inlaid a layer of leather. Its invisible operation seems to carry out the suggested incrustation on the walls of Pompeii, embedding unsuspected presences under the silky surface of its birds.

If, from the perspective of science, we have been asking ourselves for centuries about what materialities have not revealed about themselves, Gilson Plano seems to want to attribute them even more subjectivity by suggesting that, in addition to not being fully manifested, matter can effectively be hiding. With a work designed in and for time, the substances that pass through his hands will live, it seems, largely studded with secrets.

While previous works consisted of weaving pearls behind walls or seeds below the floor of exhibition spaces, the mysterious gestures that form birds and stones renounce the extensive character of their installation practices and are reduced to small points and spaces. Contained, its objects become, therefore, concentrations of energies and existences that, even if invisible, are there.

Initiated in Candomblé, Gilson Plano exercises, in his work, the principles of the igbá (“settlement”, in the Portuguese translation). Presence of the òrìṣà (orixás) in the aìyé (land), the igbás are their way of being among us beyond their imagery representation, their figuration. They are not the deities themselves, but rather a way of interconnecting the spaces they inhabit: the physical plane of the aìyé (where we are) and the spiritual territory of the Orun, to which we are ancestrally connected.

In this way, some of the foundations that are both constructive and ontological in the artist's work come from the Yoruban knowledge of the igbá, such as the relationship between presence, (in)visibility and secrecy - since the settlements must be kept protected - or the implication between continent and content, interior and exterior, since the igbás are usually recipients that designate the presence of what cannot be contained.

As connectors between worlds and beings, the igbás are also ways of conveying the asè (axé), the invisible vital force that takes place in the movement of relationality, in the space between. In these terms, the rite of settlement performs its geometry of relationships: transitive, the igbá does not yearn to become a fixed and unavoidable landmark, but to be a position from which we can feel all life move, lending its shapeable body to the continuous flow of axé.

From the understanding of the circularity of the vital force comes another of the foundations of Plano's work: in it, what may seem stagnant is in progress. As the sculptural pair bird and stone (2022) makes up, if tension is needed to produce inertia, stabilizing the movement then becomes an act of force that, as such, is always on the verge of its own transposition. It is a cosmological understanding: axé is not exhausted or paralyzed. Therefore, if by any chance it comes to stagnate in some corporeality, then we must free it from the forces that imprison it.

Given its circularity, untangling the asè requires movement and, therefore, will constitute a new crossing. Vectorizing it through ritual devices and material agencies that can transfer its force becomes, in this way, an extremely relevant knowledge that interests Gilson Plano also from the perspective of artistic practice. It is no coincidence that his work is inhabited by transmitting signs (wires, strips, electricity, cables, arrows) that compose arrangements capable of – physically, spiritually and symbolically – approaching and implying materials, bodies and movements, thus catalyzing the axé of the world.

This vocation of his work and existence is made in duration. For this reason, the artist chooses the stairs, one of the Yoruba symbolizations of time (Iroko), to integrate his compositions of concentrated strength, placing them between the orthogonal planes of the exhibition space. In Stairs for Stones (2022), Gilson Plano interconnects the energy flows that life between walls sometimes causes to park in almost always dead corners, almost always without a spell.

Attached to the small stairs are enigmatic corpuscles, encaustic and stone formations whose positions make the directions of their climb ambiguous. By not revealing whether they are going up or down, they manage to blur the supposed univocity of the arrow of time in the immanence of its suspended movements. They are present without announcing where they come from or where they are going. They just keep going, but perhaps – as in other works in this exhibition or similar to what is hidden under the lava of Vesuvius – they keep, embedded in their bodies, secrets forged in heat and time.