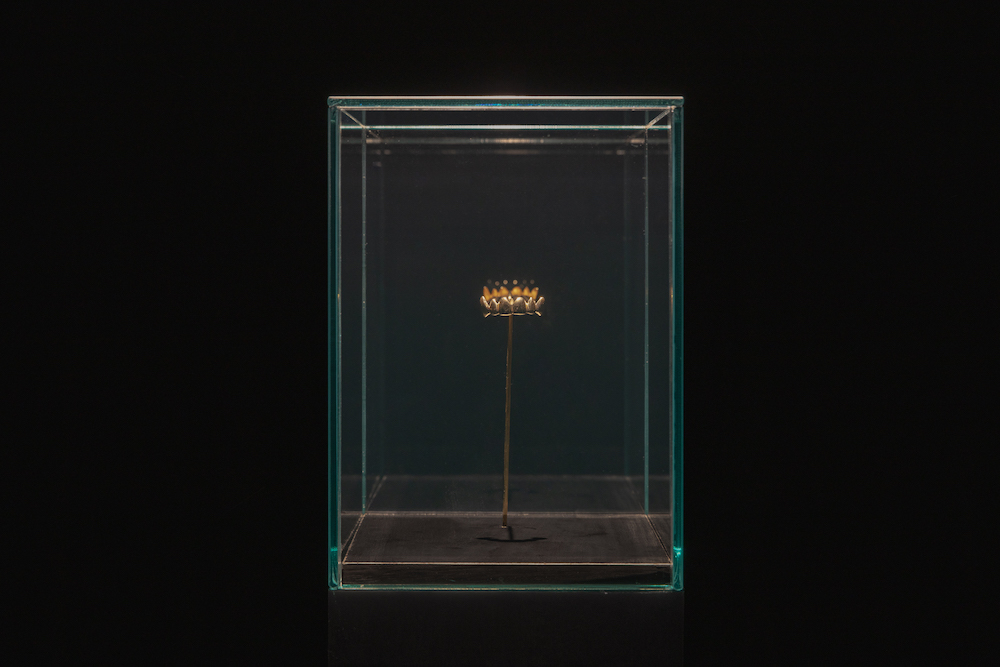 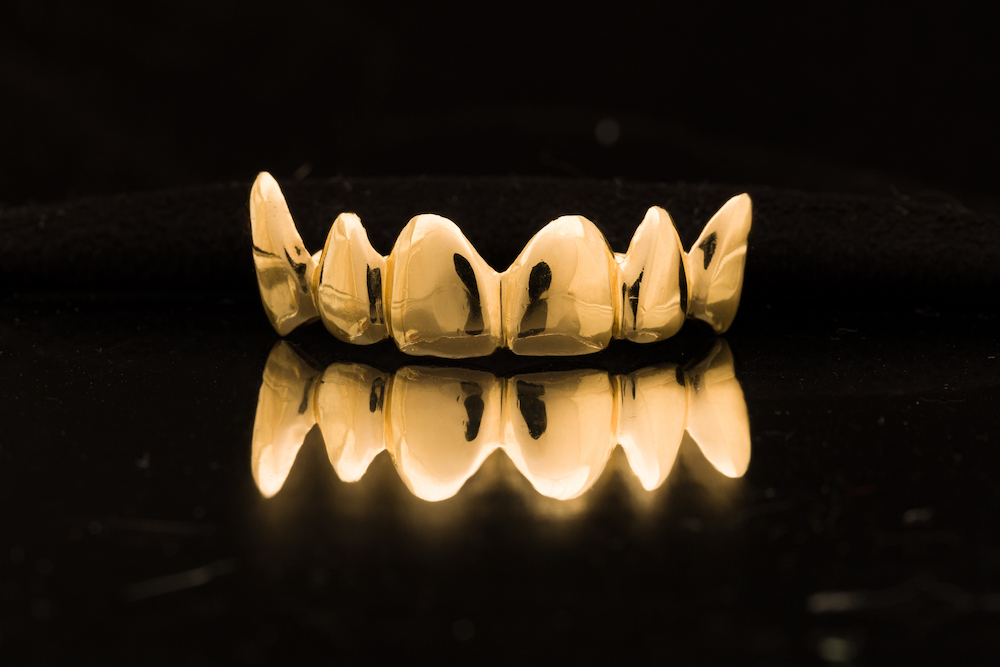 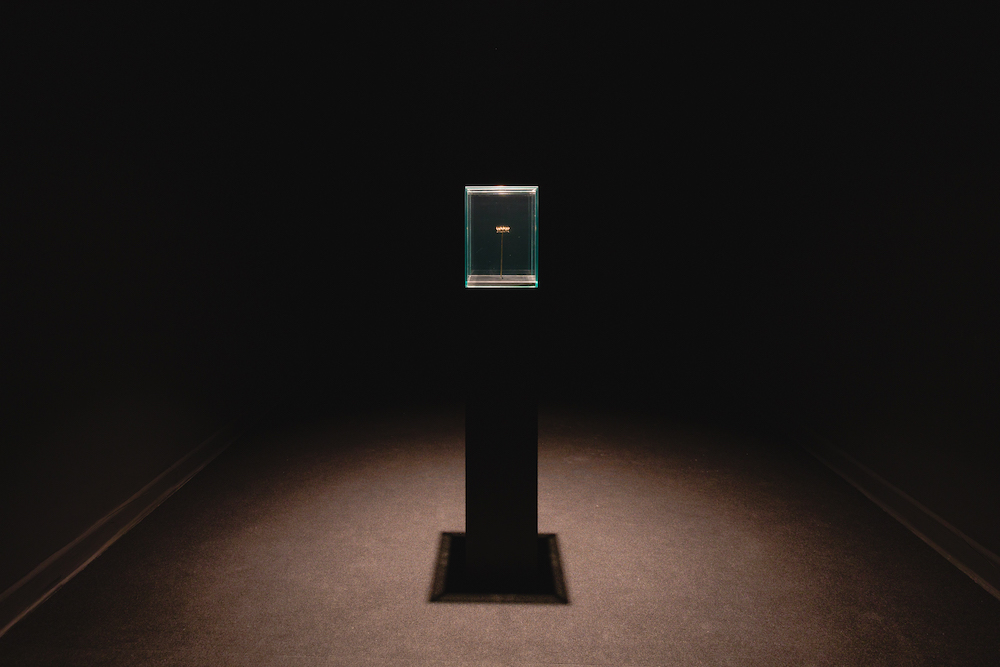 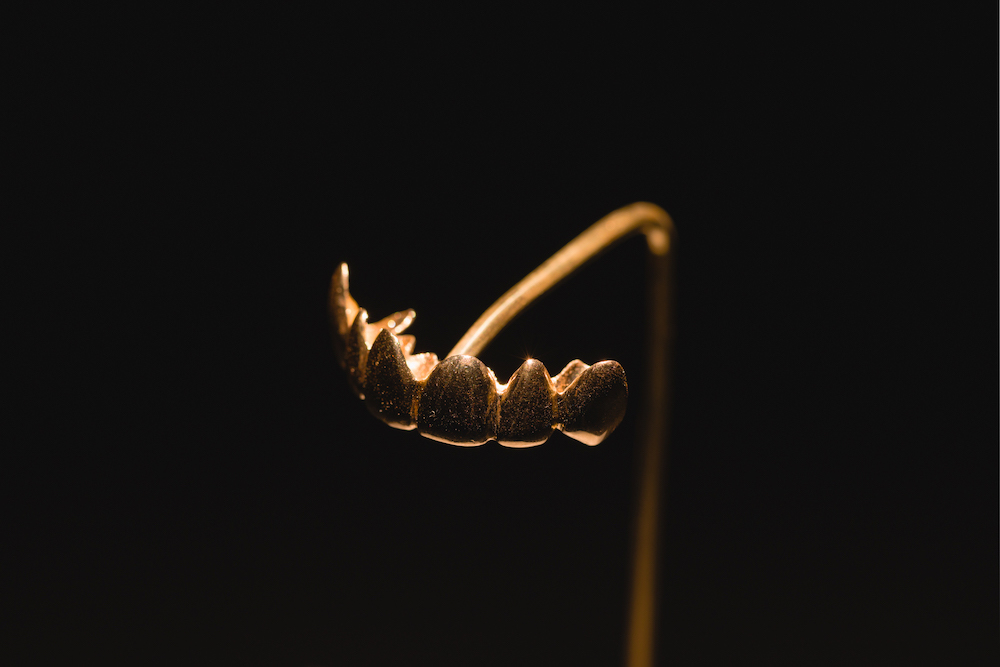 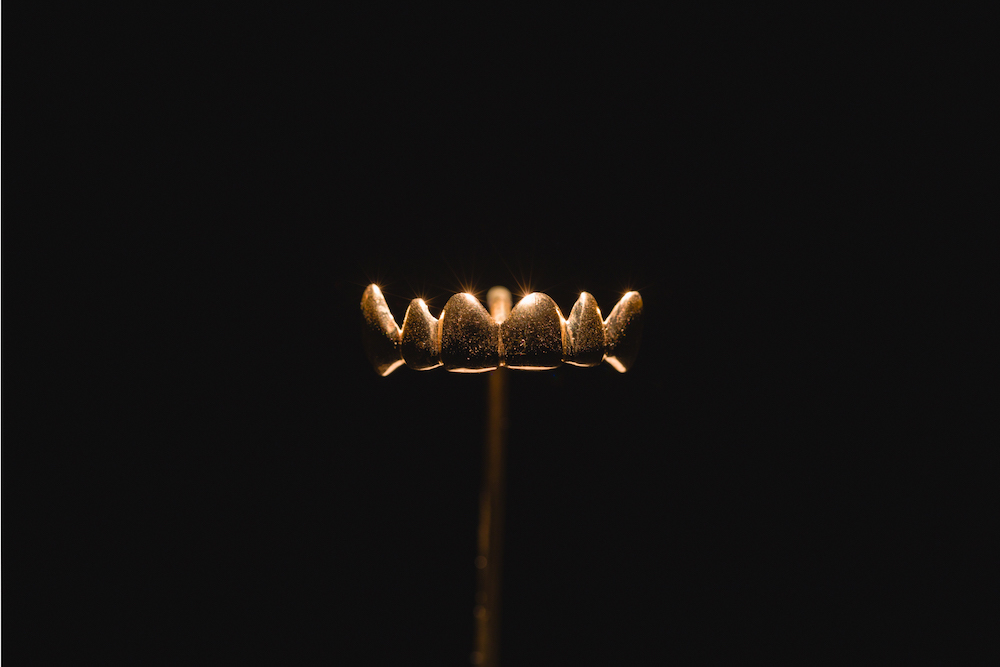 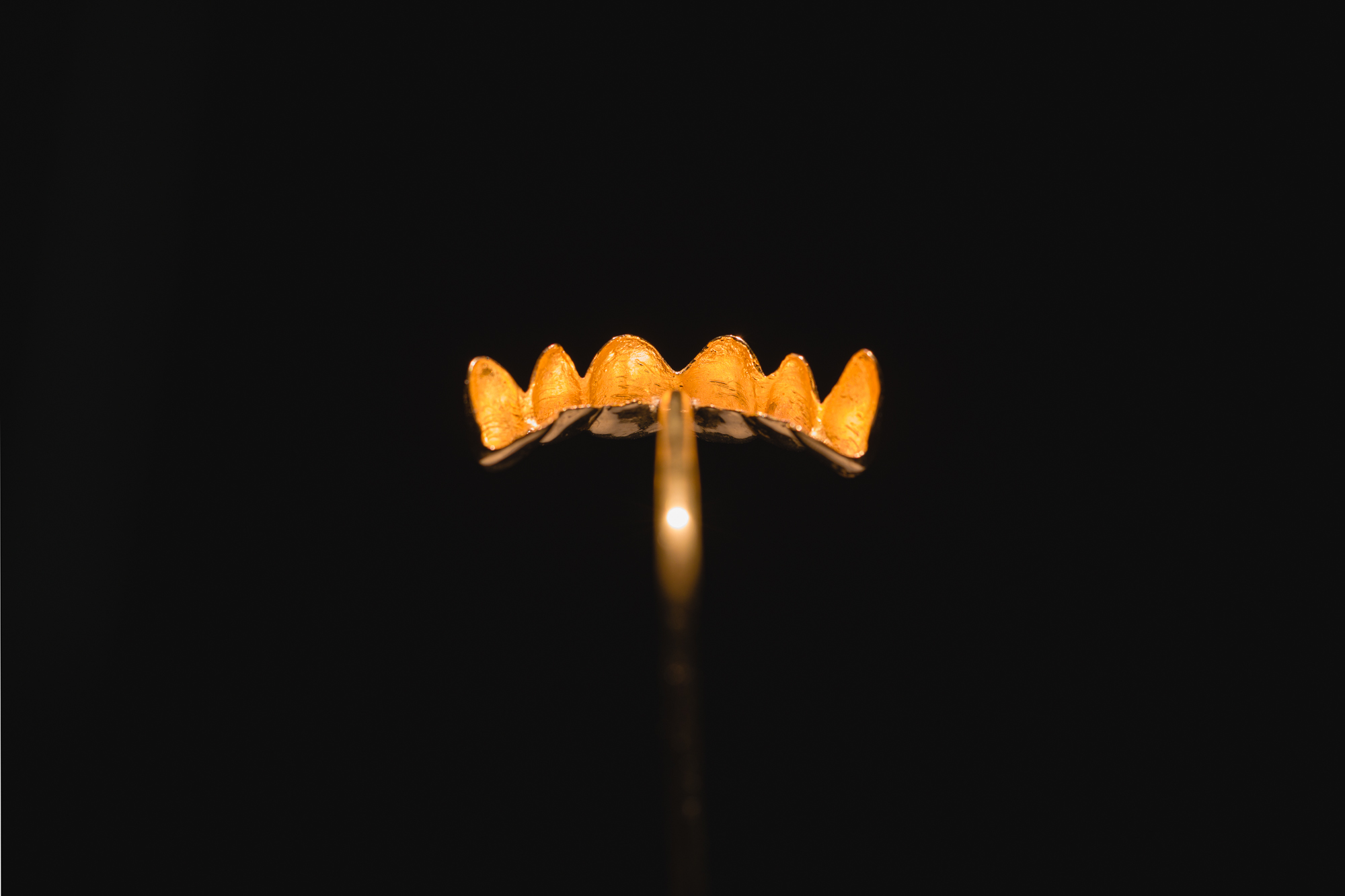 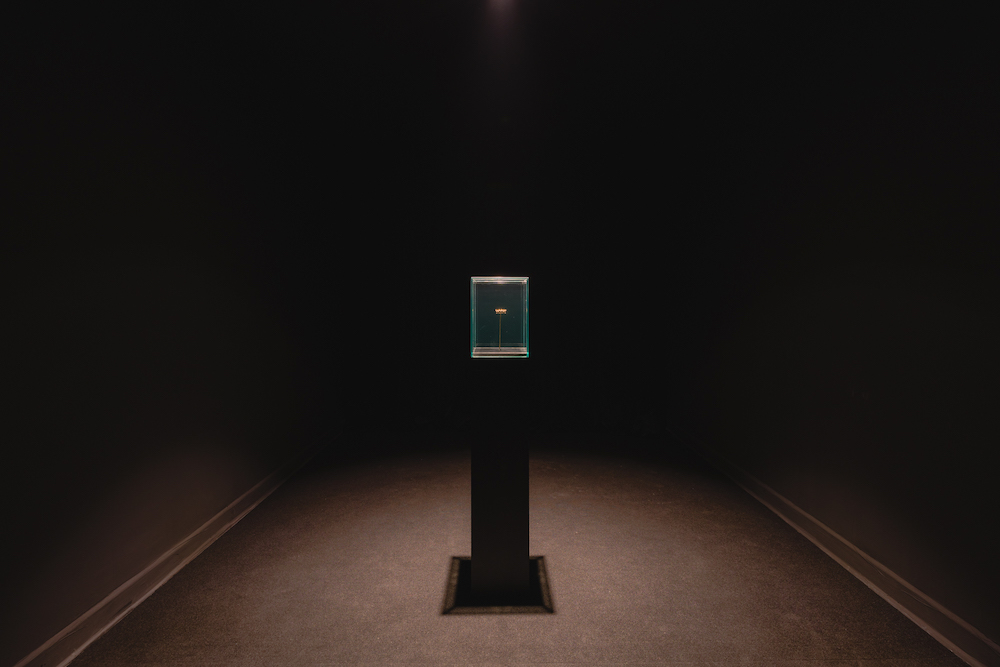 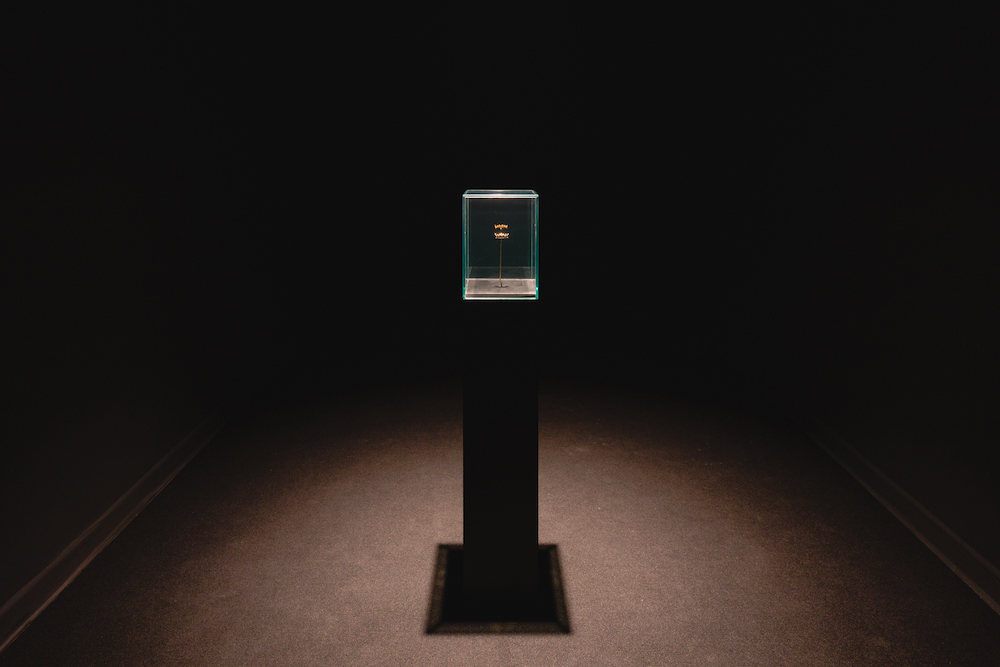 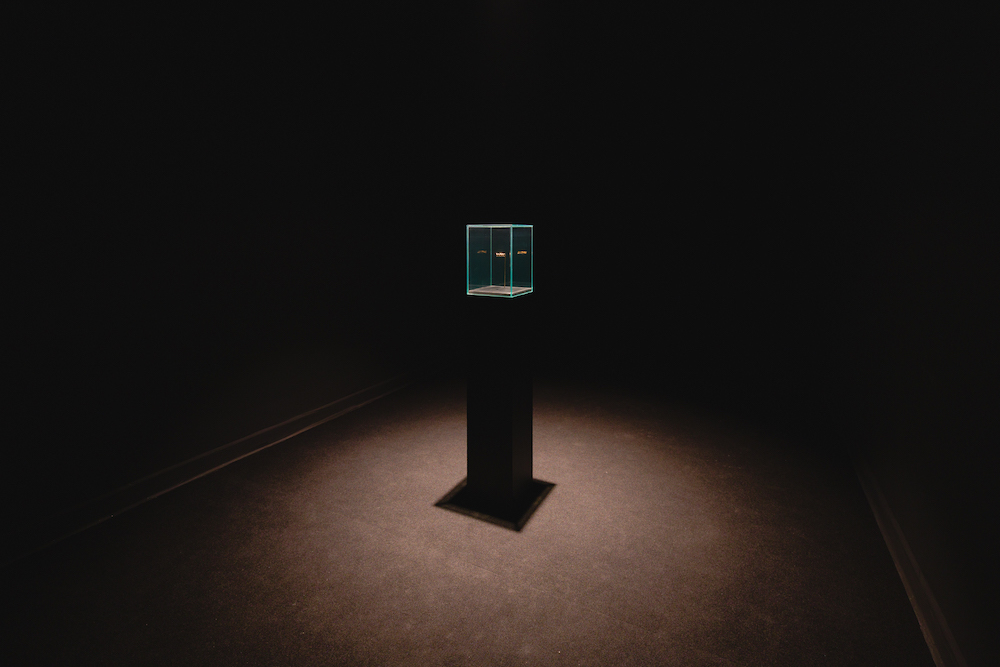 Images courtesy and copyright of the artist and space. Photos by Ana Pigosso.

The solo exhibition by São Paulo artist Bruno Baptistelli on the 55SP cultural platform entitled ‘Memento’* , is revealed to the public in a single work.

Made from a mold of the artist's teeth, a gold object is the main element of the proposition that is presented in a room that subverts the idea of ​​a white exhibition cube.

The installation, next to a dark, theatrical black box, has the object at the center inside a transparent display, with directed light, and stands out in the center of the room.

*object that evokes something or someone; remembrance.

With a critical text by Ademar Britto, the project opens on April 2nd from 11 am to 7 pm, at 55SP, located in Vila Modernista de Flávio de Carvalho, house 4, where Espaço CAMA is located.

Baptistelli was born in 1985 and holds a degree in visual arts from UNICAMP. His works are part of the collections of important institutions, including MASP and the Pinacoteca de São Paulo.

The exhibition will be on display until the 30th of April.

lives and works in São Paulo

Graduated in visual arts from UNICAMP, he uses several media in his practice, including from painting to installations and site-specific works.

His works are part of the collections of important institutions, including MASP and the Pinacoteca de São Paulo.

Ademar Britto Jr, collector and art curator, has a degree in Curatorial Studies from the Escola de Artes Visuais do Parque Lage (Rio de Janeiro) and Node Center for Curatorial Studies (Berlin), in addition to having attended the Postgraduate Program as a special student. in Visual Arts from the Federal University of Rio de Janeiro. He is also a doctor with sandwich training from the Universidade do Estado do Amazonas and Université René Descartes-Sorbonne Paris V, specializing in Cardiology and a Master's in Cardiovascular Sciences from the National Institute of Cardiology of Rio de Janeiro.

55SP acts as a cultural platform carrying out projects with contemporary artists. Its principle is to spread art and encourage new collectors, for this we work by commissioning projects and works in the most different formats, online or offline. Working with the help of curators in the production of editions, multiples and artist books, in a collection that extends to publication, objects, sculptures, sound art such as vinyl records and other media. We hold exhibitions, performances, occupations in public spaces, debates, among others.