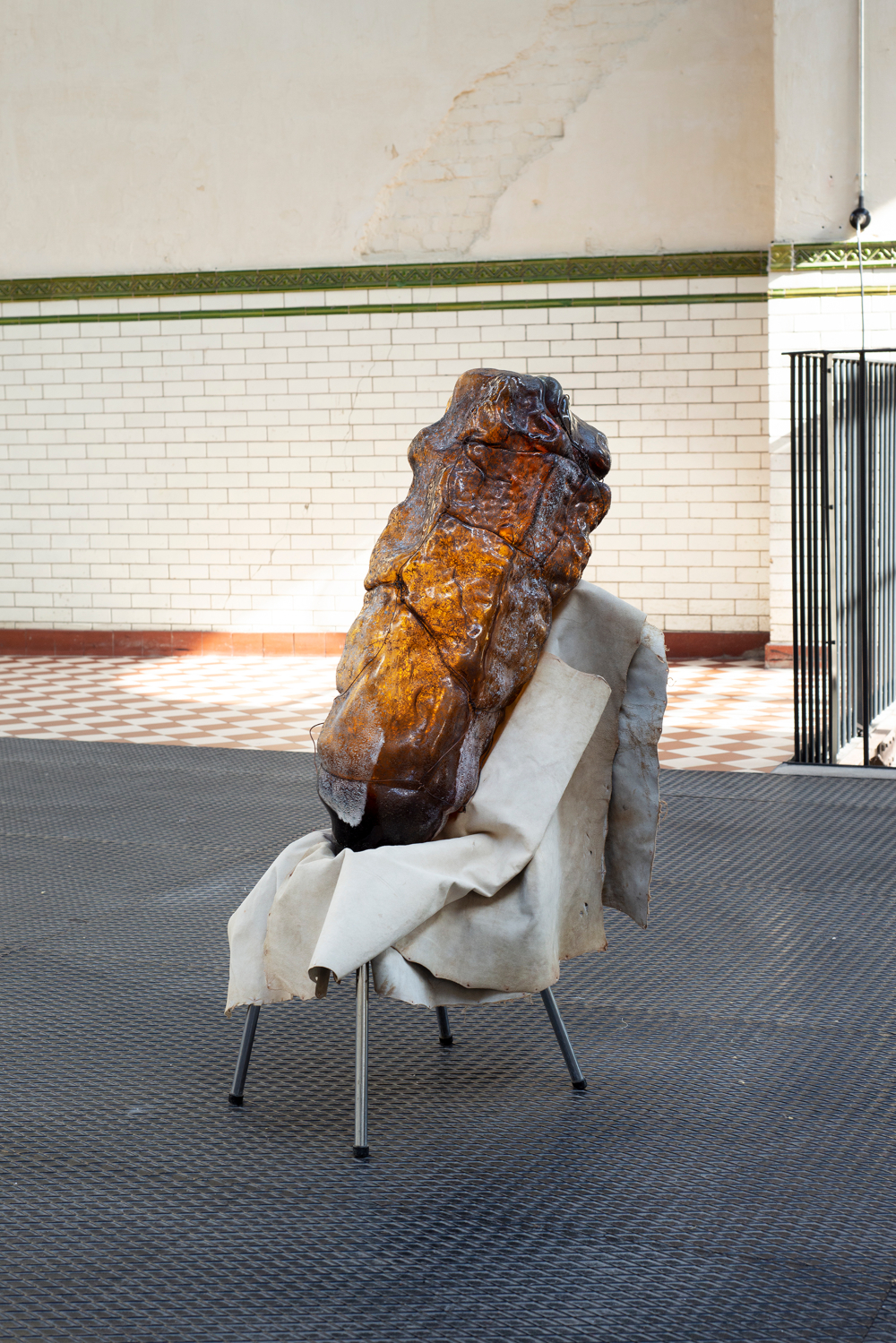 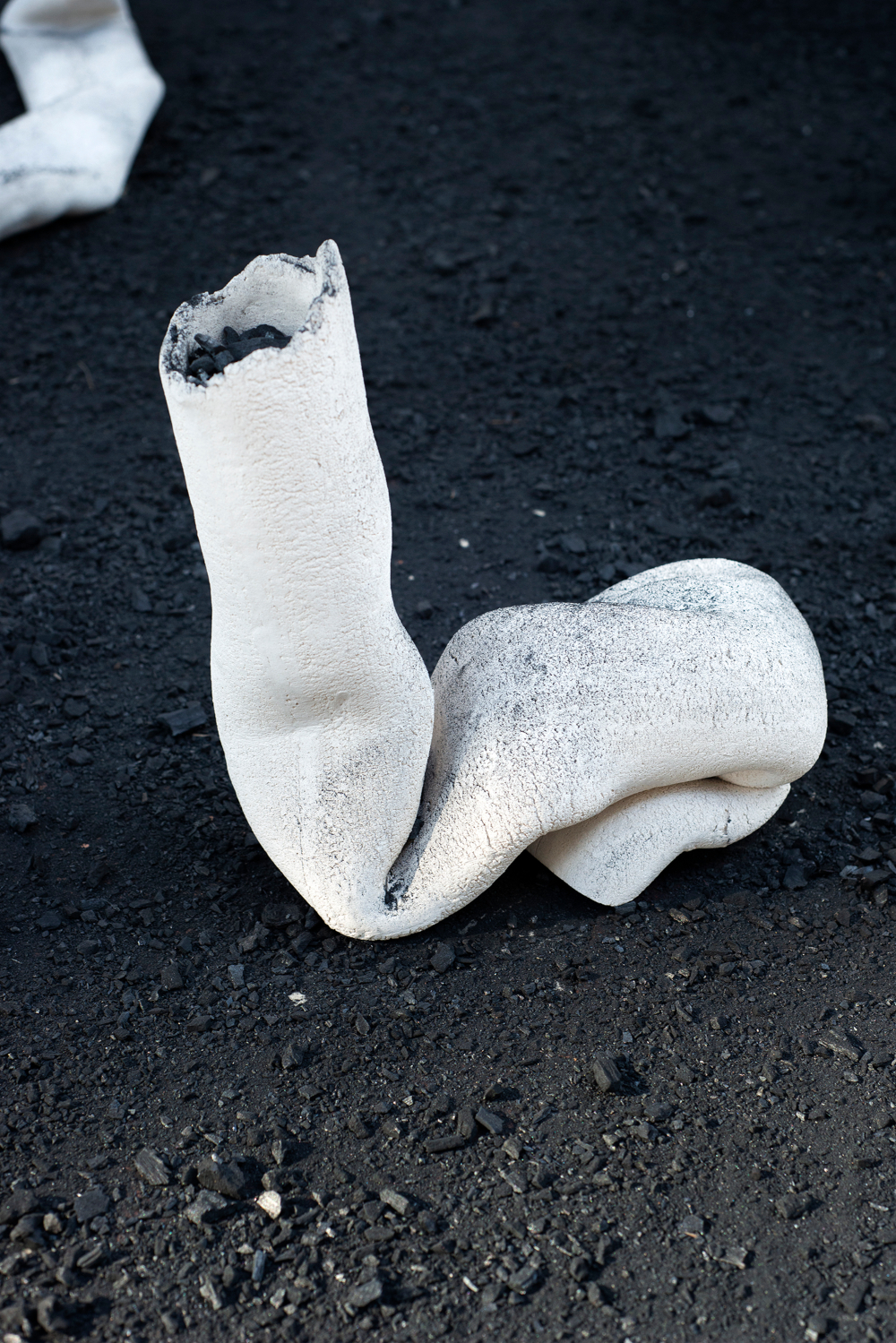 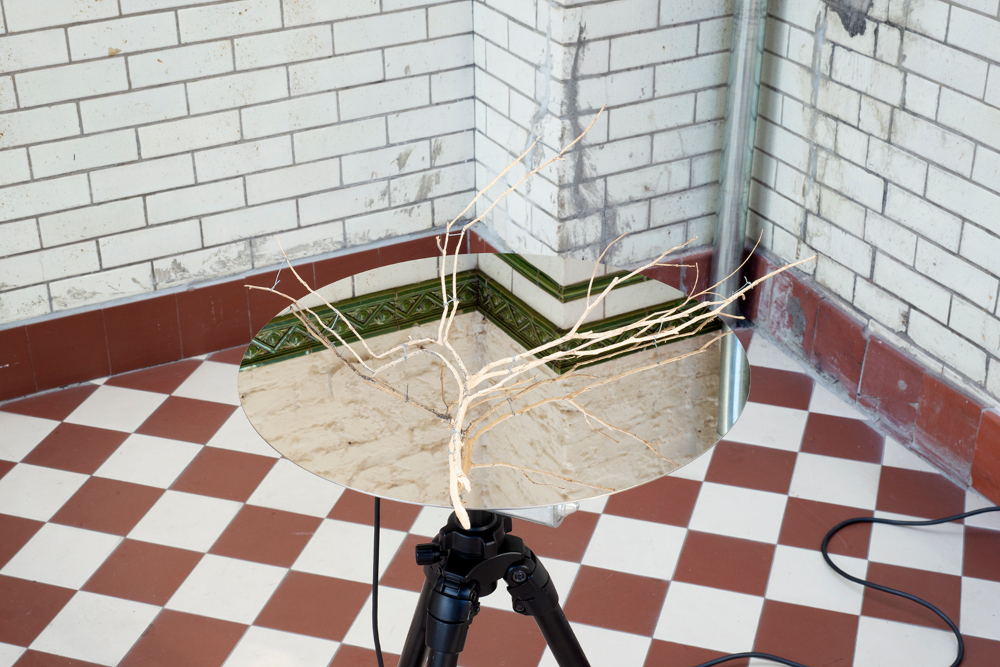 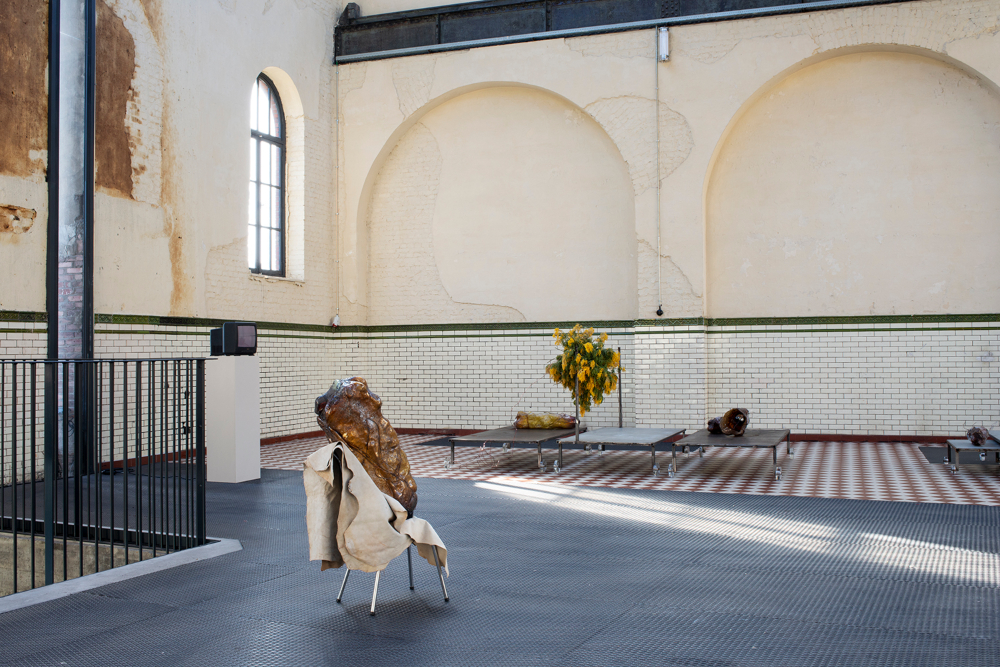 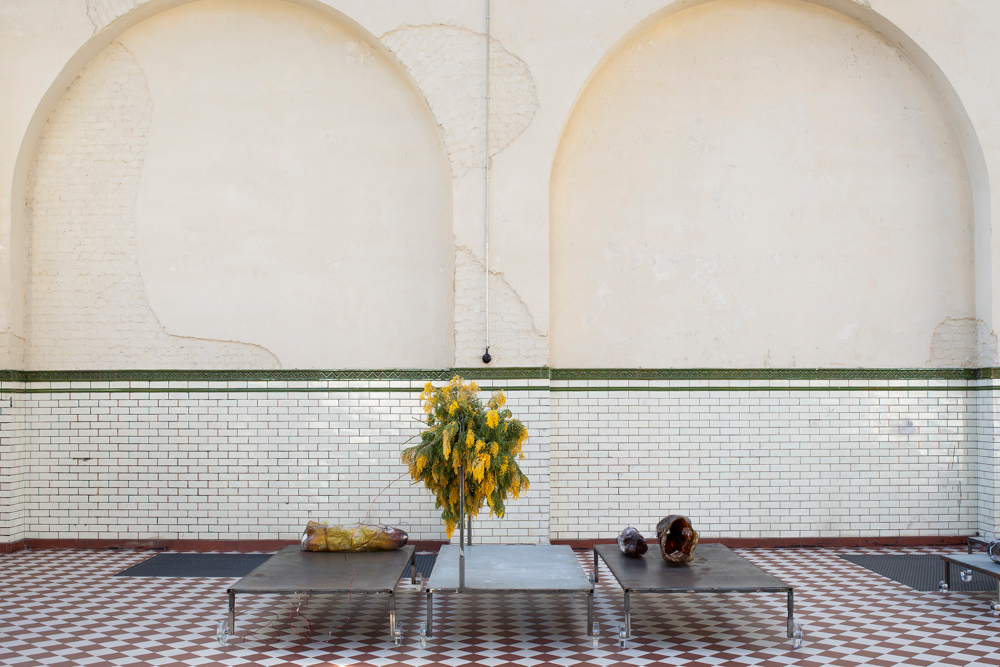 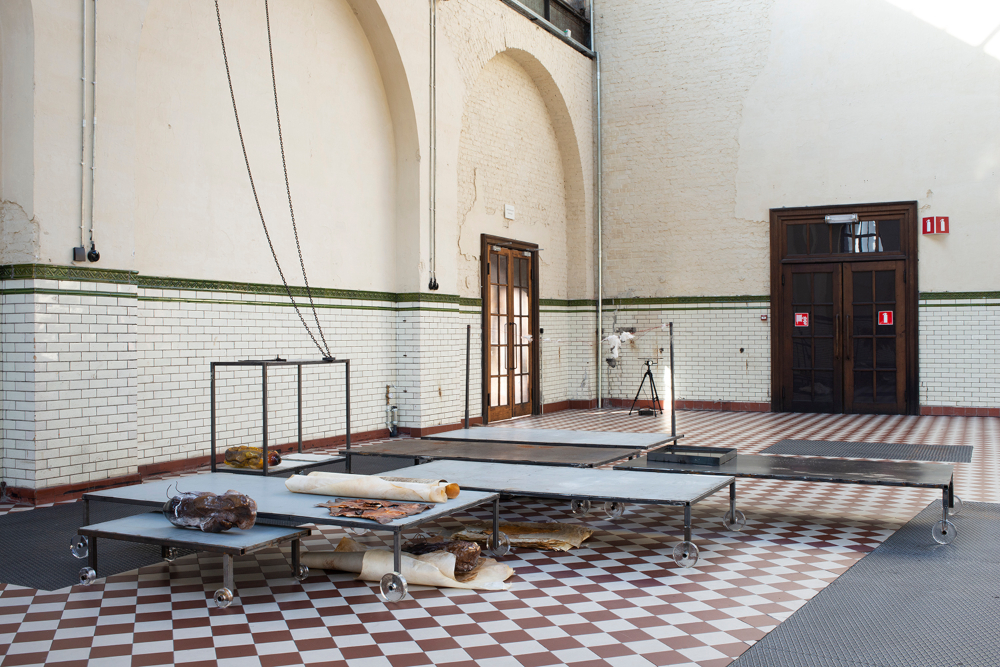 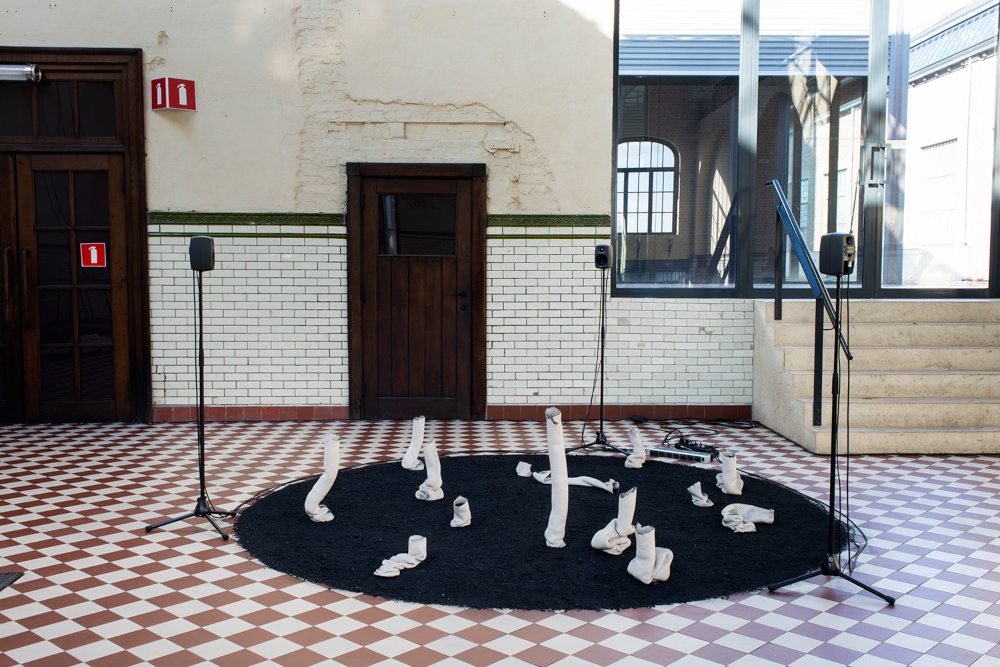 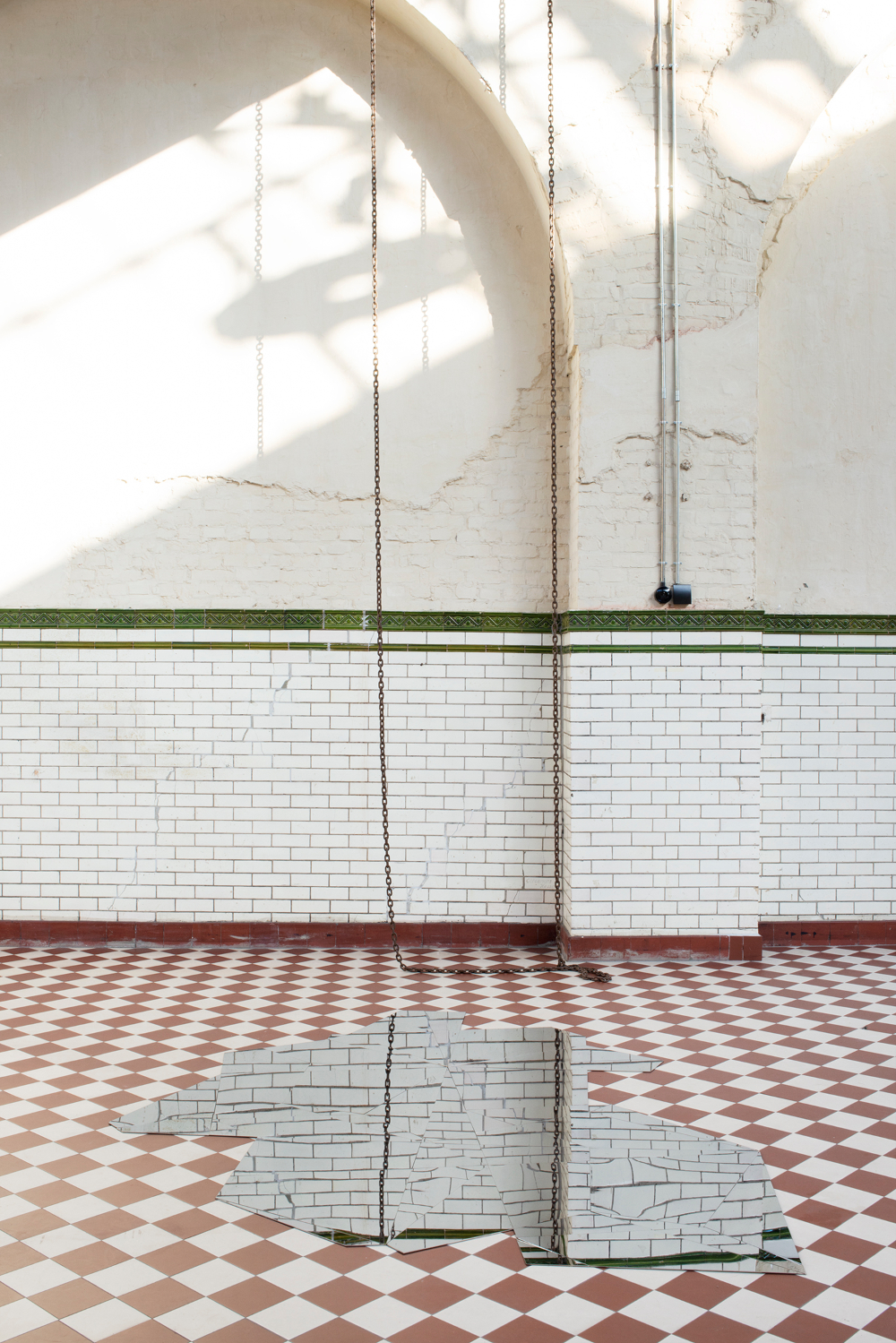 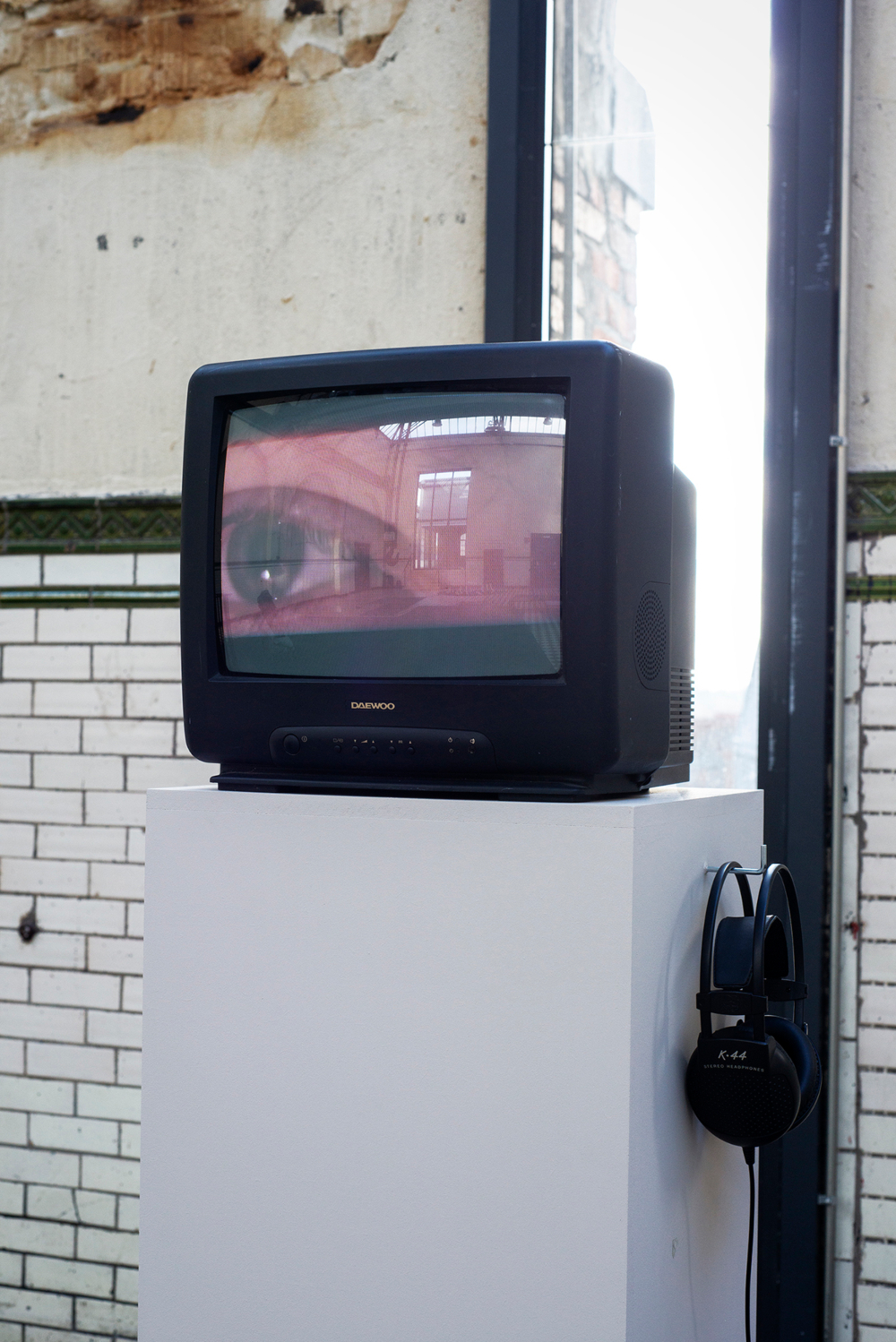 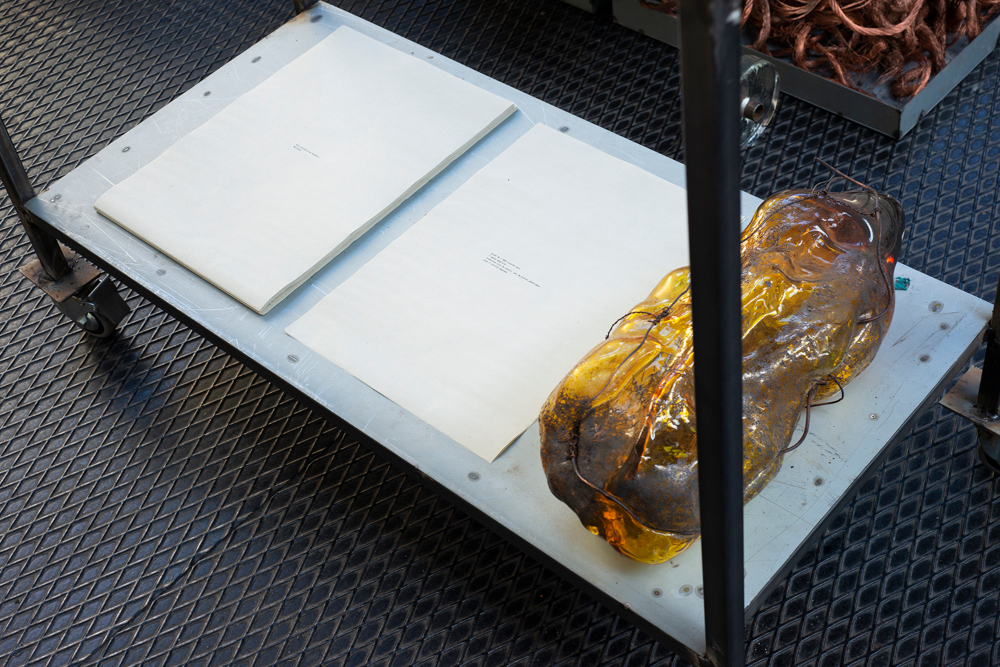 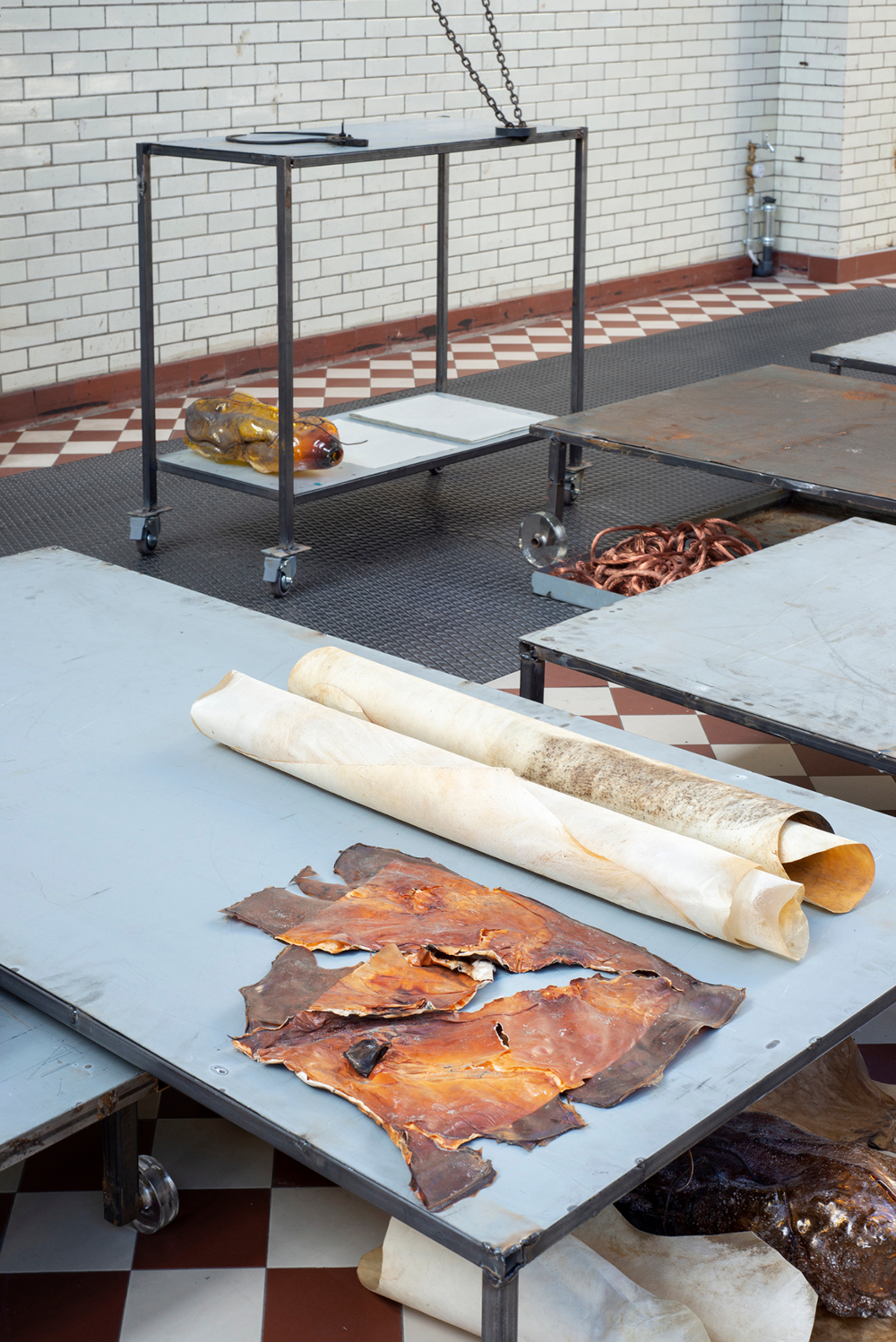 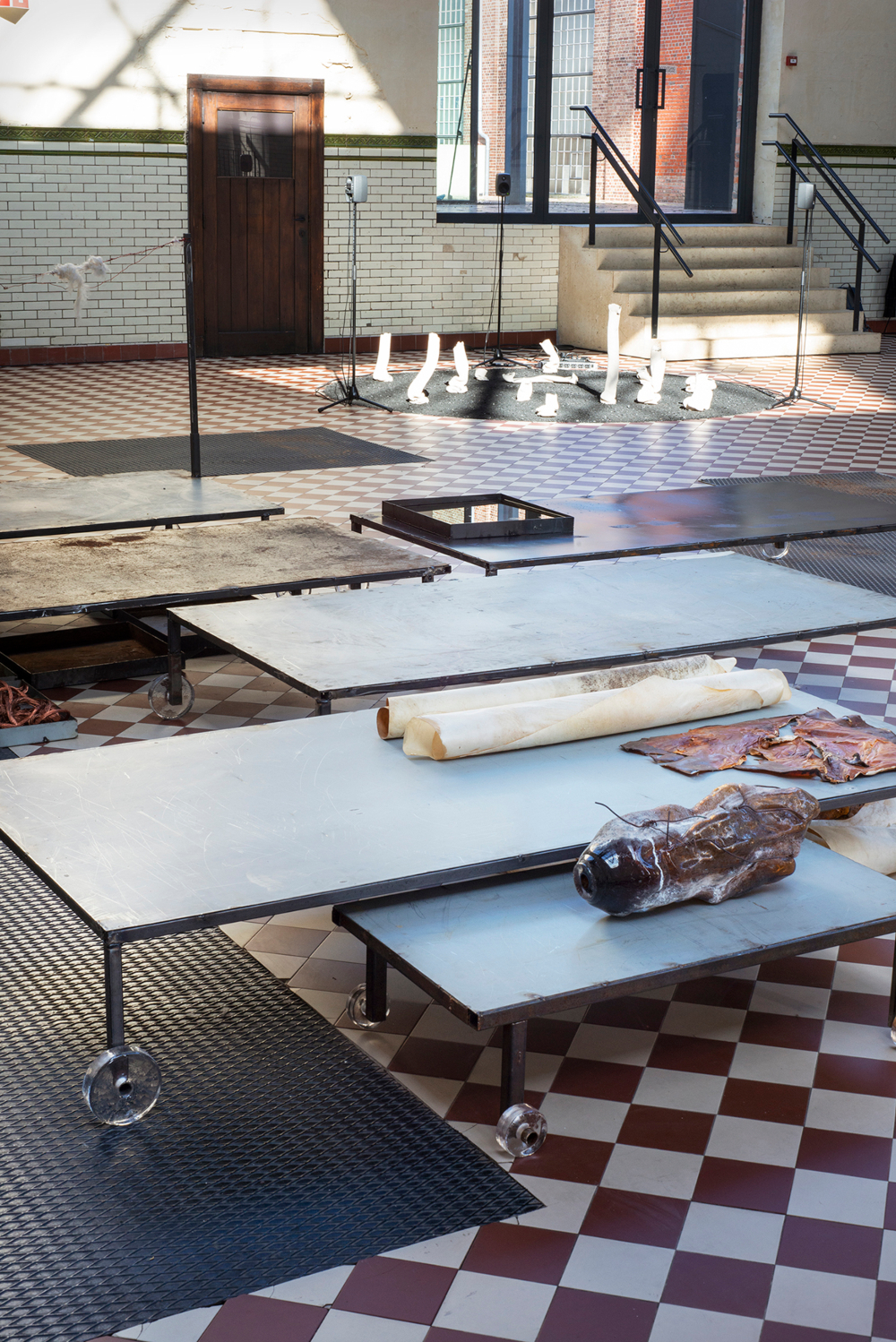 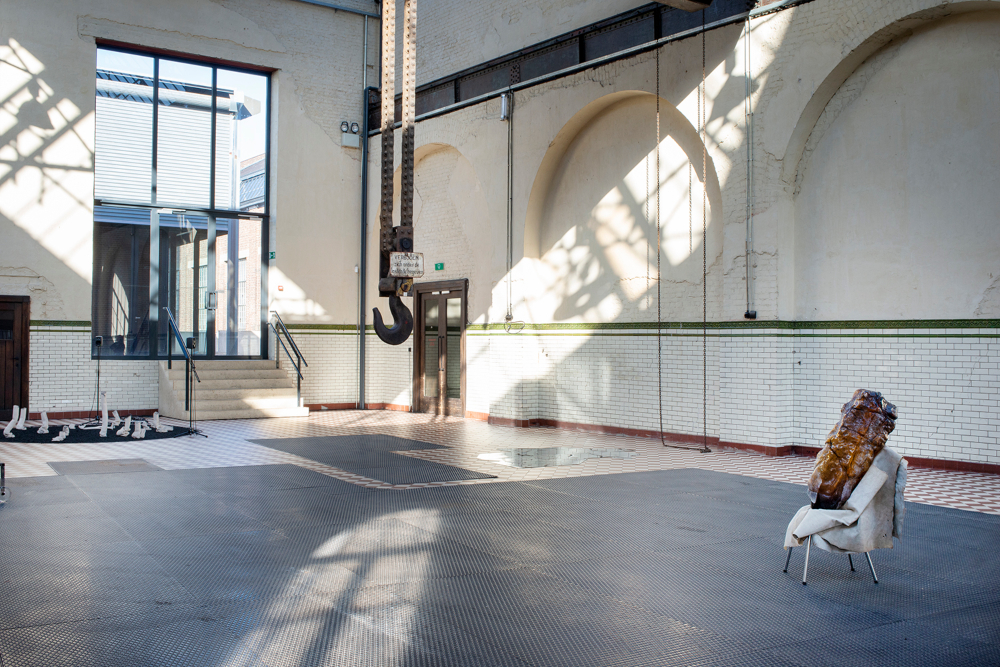 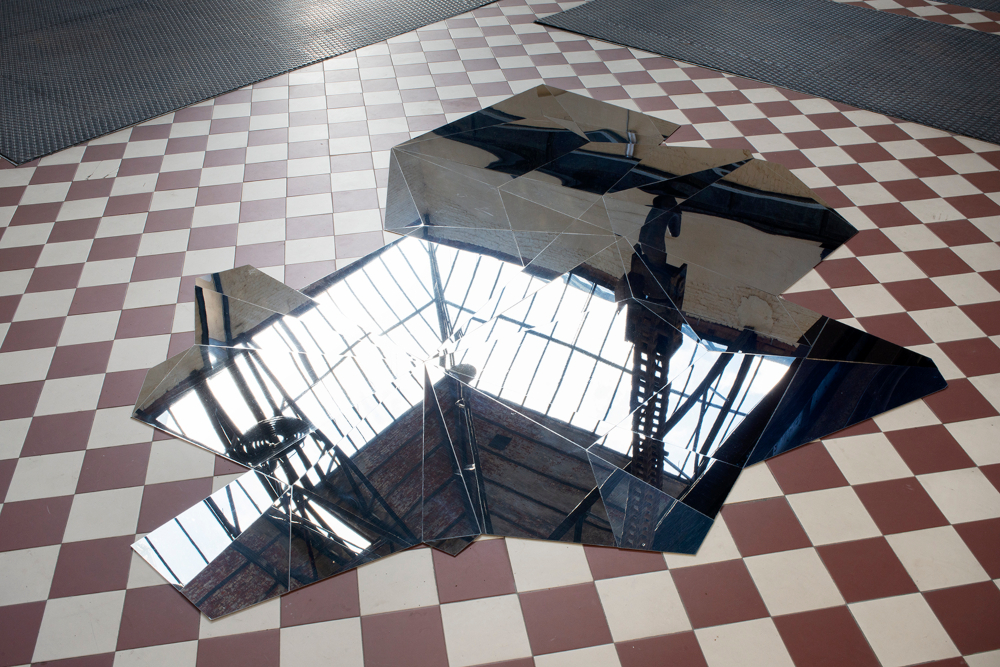 Laila Melchior and Koi Persyn — laureates of the second edition of the Lichen Curatorial Prize — present a transformative exhibition connecting three artistic practices and methodologies to the unique site of the former Winterslag coal mine. Having hosted an industrial complex of coal exploitation for approximately a century, this site embodies the capacity to generate and process energy not only through its history but also in its recent transformation into a creative hub.

‘Trope’ and ‘entropy’ share the same ancient Greek root in the word τροπή, evoking the ideas of turn and transmutation. Tropes are literary motifs that use figurative forms of language to increase the tangibility of meaning, stimulating associative perceptions. Entropy is a term that has gained momentum in current times. A scientific concept that stems from thermodynamics, it indicates a transmission process within a closed circuit. Drawing from this specific usage to a more general one, it has been widely used to exemplify the irreversibility of time, of processes that have a clear start but no defined end and that can become quite invisible, as much as they are omnipresent.

In parallel with, and inspired by such a mixture of possible approaches to the phenomenon of transformation, the exhibition itself undergoes a change over its course. Three Tropes for Entropy opens with clusters of works highlighting each participating practice and gradually evolves towards an intermingled diffusion of particles. These transformations will be marked by three activated moments or chapters - identified by the curatorial duo as exhibition’s ‘tropes.’ These gradual changes allow for interactions between the works themselves and the space, modulating intensities to render visible the mutability that circulates inside the engines of practices.

mountaincutters (FR, °1990) is a hybrid identity, living and working in Brussels. Their duo-practice consists mainly of site-specific sculptures that reconfigure the space where they are exhibited. Through poetic texts and analogue photographs, the duo often finds historical and/or material leads that form the basis of their sculptural installations. These constellations of glass, ceramic, copper and metal objects are in constant flux, forming a closed circuit between the different entities. The in-situ works balance on the threshold of inactive and dynamic, present and invisible, rough and refined. Like an echo of this confused identity, the installation adds an aesthetic uncertainty, favouring transitory situations and unfinished forms for seemingly fortuitous compositions. mountaincutters unifies phenomena that are considered incompatible into one coherent volume, therefore pushing the boundaries of the sculptural into conflict.

Angyvir Padilla (VZ, °1987) lives and works in Brussels. In her practice, she invites the viewer to look closer at the places we inhabit by examining how we embody memory. Padilla proposes that the traces of our past seep into a persistent present. Her immersive installations distil the concept of ‘home’ as an intimate, secluded place and relate this notion to people and nature. Padilla’s practice explores the discrepancies and intervals between identity, material and space. Her work turns around the sense of otherness one encounters once presence enters into a dialogue. Angyvir Padilla often works presenting objects and processing materials in relation to the spatial environment in order to connect emotionally with the viewer.

Daniel Steegmann Mangrané (ES, °1977) lives and works in Rio de Janeiro. His research is composed of subtle yet crude experiments that question the relationship between language and the world. Although primarily conceptual, his installations engage with the spectator’s imagination and exhibit a strong concern with the existence of everything we see, but especially on everything that we do not see. Mangrané’s work often traces the boundary where nature meets artifice. Lines, circles and rhombuses are drawn, cut and projected onto leaves; the delicate symmetry of branches is split in two. These precise interventions hold a powerful force of attraction: a moment of uncertainty between what is contrived and what is natural. In each of Steegmann Mangrané’s intricate compositions, we get to experience that, far from being distinct, the organic and the geometric, the vital and the abstract, define each other.

Laila Melchior is an independent curator and researcher investigating the fields of contemporary art and audiovisual aesthetics. She holds a master’s degree in Communication and Culture from UFRJ (BR) and a postgraduate degree in Curatorial Studies from The Royal Academy of Fine Arts (KASK). Laila Melchior works on projects related to arts, film and theory, looking to incorporate perspectives from the Global South into her projects. As a curator, she collaborates with art institutions. Some of her recent projects are the exhibitions Trojan Horse Behind Glass; Time, Times. Half a Time; and The Ghost Library. She is one of the founders and part of the curatorial board of Aventuras do Pensamento, a series of encounters between a children-composed audience and some of the greatest contemporary Brazilian thinkers, scientists and artists that since 2016 discusses pressing issues in the political, innovative and creative horizon of the country. Laila Melchior has also designed the Young Curators Programme, a project which she coordinates to promote a greater engagement of emerging curators in the frame of Belgian participation in the Venice Biennale. Formerly a lecturer at the undergraduate course in Cinema and Digital Media at IESB (Brasilia – BR), she has also published and presented academic works.

Koi Persyn is a Brussels-based independent curator and visual artist. He obtained a master’s in Fine Arts at The Royal Academy of Fine Arts (KASK) after which he completed a postgraduate in Curatorial Studies, also at KASK. During his studies, Koi Persyn founded and co-curated STOCK, a three-year-running residency programme in Het Paviljoen, Ghent. His artistic and curatorial trajectory encompasses notions of authorship and collectivity, employing experimentation with exhibition formats in unconventional locations. His curatorial projects focus on process-based, experimental, and interdisciplinary practices through open-air, collaborative, site-specific exhibitions and residency programmes. Koi Persyn participated in the exchange programme with BIDAI college of arts in Kanazawa (JP) and worked in the framework of the Young Curators Program as a mediator for the Belgian Pavilion at the 58th edition of the Venice Biennale. Koi Persyn co-curated Publiek Park, an open-air group exhibition in the Citadelpark of Ghent, as part of his activities in the frame of the Young Friends of S.M.A.K. Currently, Persyn develops the annual programme of Komplot in Brussels as a guest curator.

Lichen is a prize for emerging curators, established by CIAP platform for contemporary art and the department of Curatorial Studies at KASK School of Arts to foster and support curatorial experimentation in Belgium. With the support of the Flemish Community, the City of Genk, and the CIAP members.