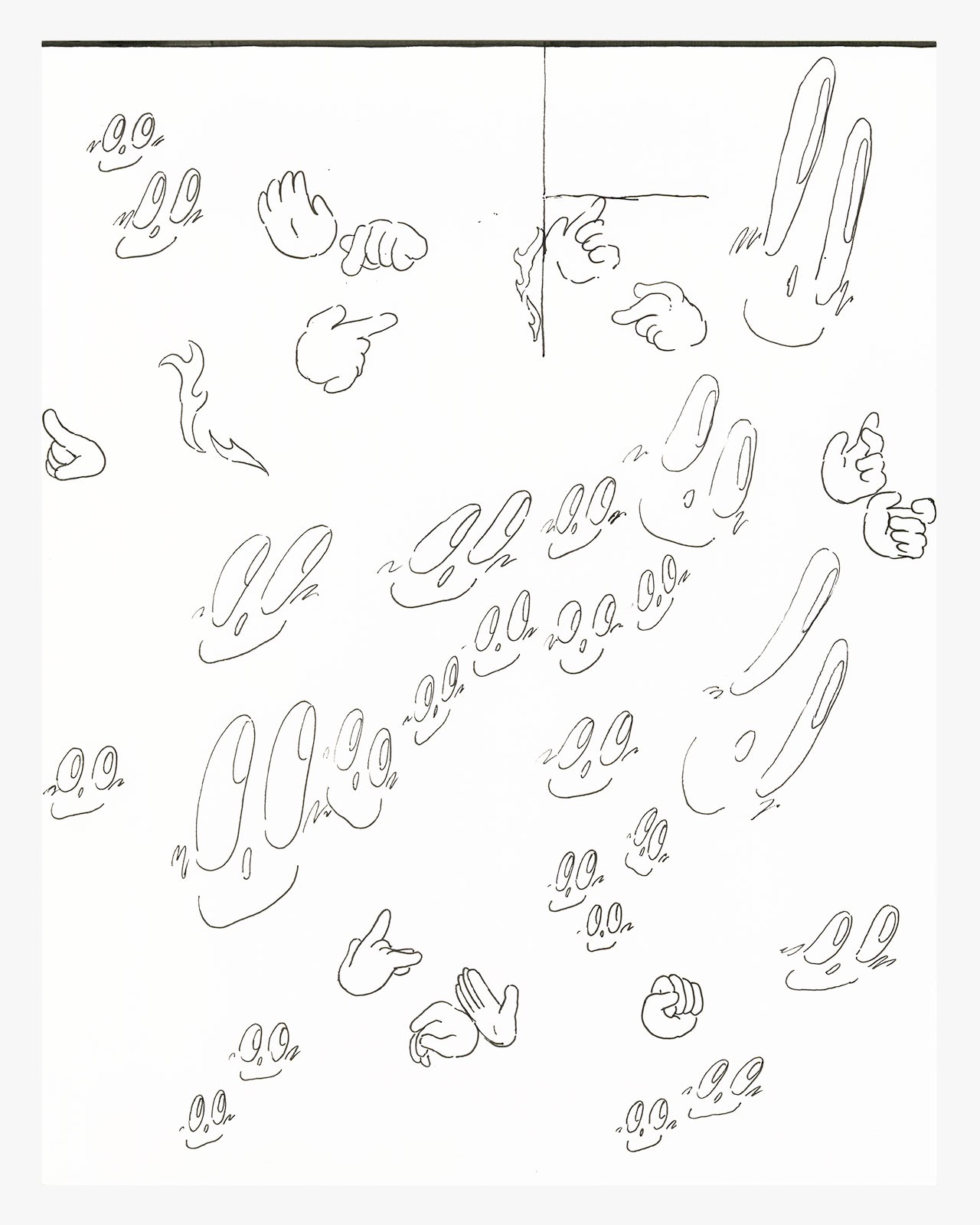 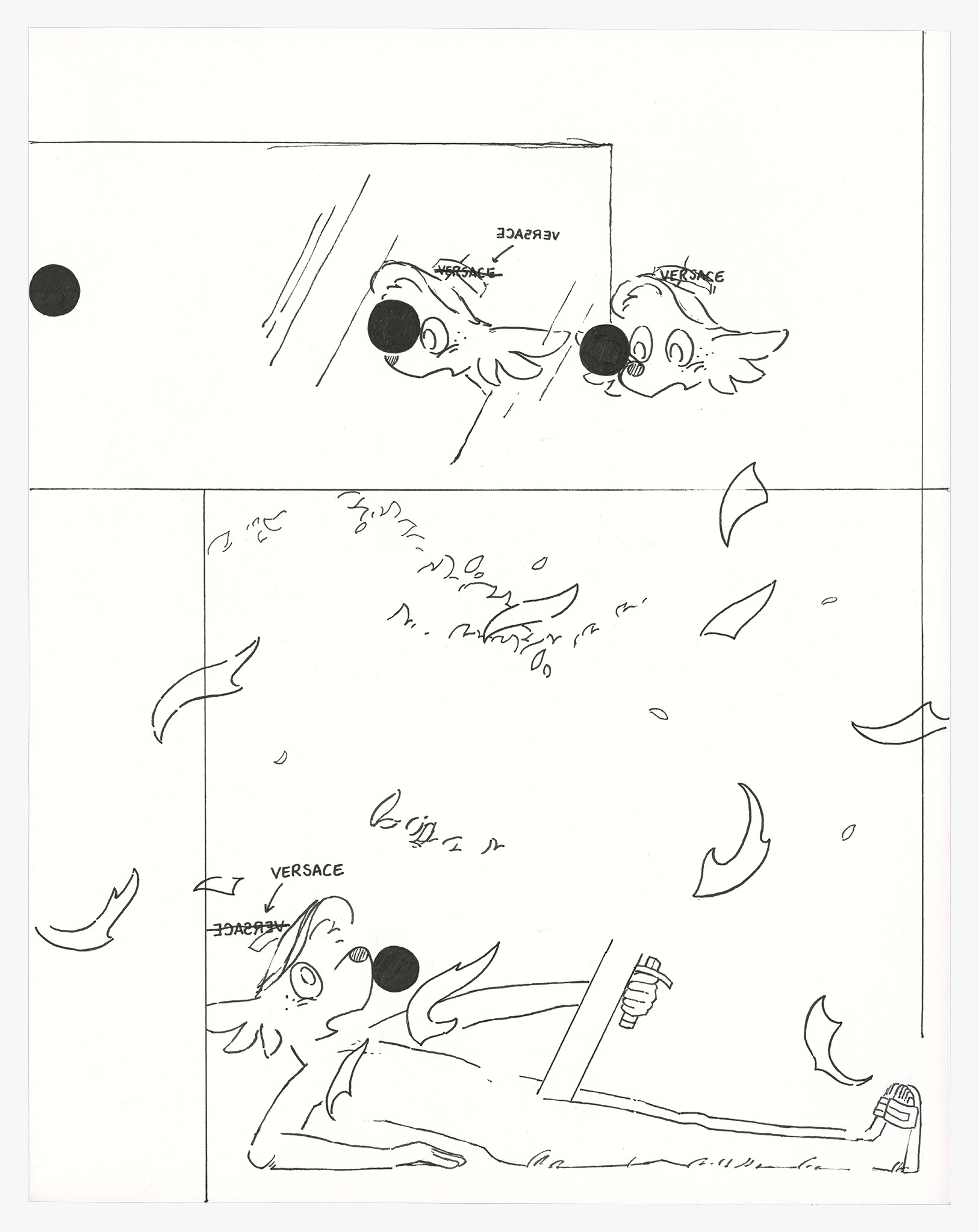 april april presents Heartland, Paul Peng’s first solo exhibition in New York.
I found Paul’s work online many years ago through a blog called alt-comics. What drew me initially to his drawings was the expanded notion that instructed the approach to reading them.  Like, what is a comic? It’s hard to locate a general theory of it, though the inquiry is fruitful. If standard comic strips abide by an orderly visual system in service of narrative through sequence, Paul Peng’s world of drawing explores a systemic breakdown, often to the effect of syntagmatic euphoria. Drawn containers, figures, language and so narrative, diffuse in the same way that atomic elements under certain conditions transform from solid to gaseous. The result is a heart-panging mystery, where meaning suspends between hints, winks, marks, monsters, cocks, logos, sentence fragments, landscapes, and illusions; where dimensions of emotionality and time pool together in the scheme of one page broken up into parts.
Paul’s propensity to cartoon comes from lurking within furry and furry-adjacent communities on websites like DeviantArt, an under-appreciated internet subculture rarely considered in global contemporary art discourse beyond maybe as token.1 The demon, dragon and monster boys that appear over again transcend their position within a narrative jumble to express a stunning range of feeling. This is unique to cartooning—it is captivating—a characteristic that Paul champions.
In Heartland (2020), the show’s namesake drawing, a moon-like orb peers down at a dragon boy, whose body is interrupted by a container of marks. The dragon boy seems jarred—albeit stylish, adorning AirPods, a ribbon on its tail—and the moon is enchanted, even hungry. Interpretations of the relationality among them flutter in the mind. Something about the marks feels prodding—is it sexual? Gastrointestinal? Titillation exits the head and enters the belly, signaling Paul’s commitment to both conceptually motivated practice and embodiment, improvisation. A sublime landscape informs the bounds of the world’s distances, into which we recede carrying the psychic weight of ambiguity.
Paul has talked about his work as “post-pornographic,” even “post-repressed,” relative to the circuit of content energized by DeviantArtists. Peng, in his ushering of Furry art to critical reflection in the fashion of modernist drawing, legitimates these shadows by illuminating them; the shadows of internet subculture cast by popular culture; the shadows of the page as negative space and thing in itself; the self’s shadows. Within this containment—let’s call it the heartland—there is an urgent perspective emerging.
[1] Post-internet’s cynicism left little room for anything else.
Paul Peng (b. 1994, Allentown, PA) lives and works in Pittsburgh, PA. He holds a BCSA in Computer Science and Art from Carnegie Mellon University and has also studied classical drawing at Barnstone Studios in Coplay, PA and experimental drawing at the Ox-Bow School of Art in Saugatuck, MI. Peng has shown in multiple group and solo exhibitions across Pittsburgh, where he also participated in the 2020–2021 cohort of the Brew House Association’s Distillery Emerging Artist Residency program. Beyond self-published zines, excerpts from Peng’s sketchbooks were released online by experimental comics publisher 2dcloud.
Newer Post Older Post Home