in collaboration with Alexis Bondoux and Noah Cohen 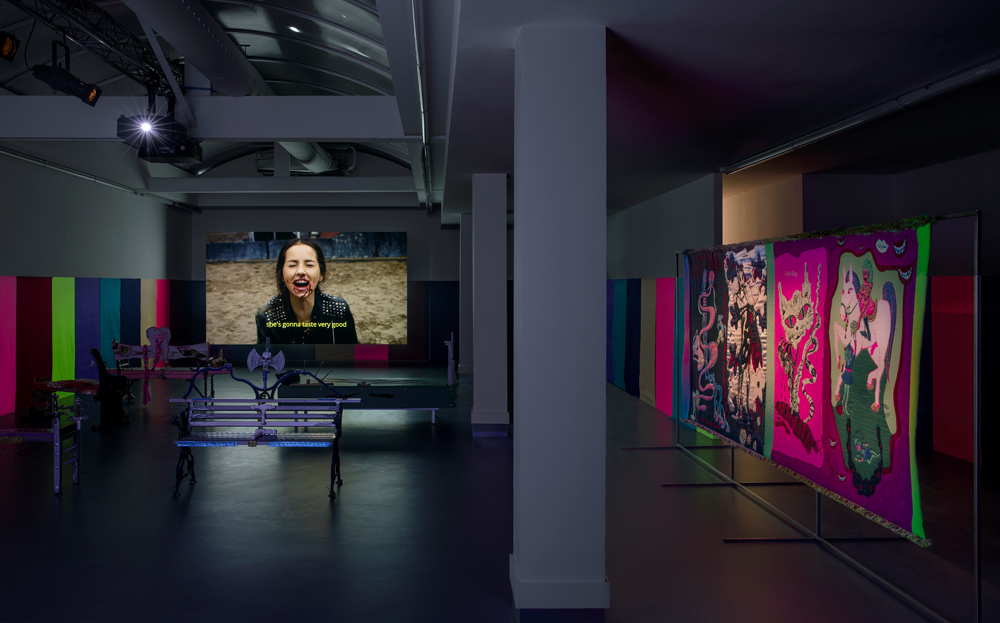 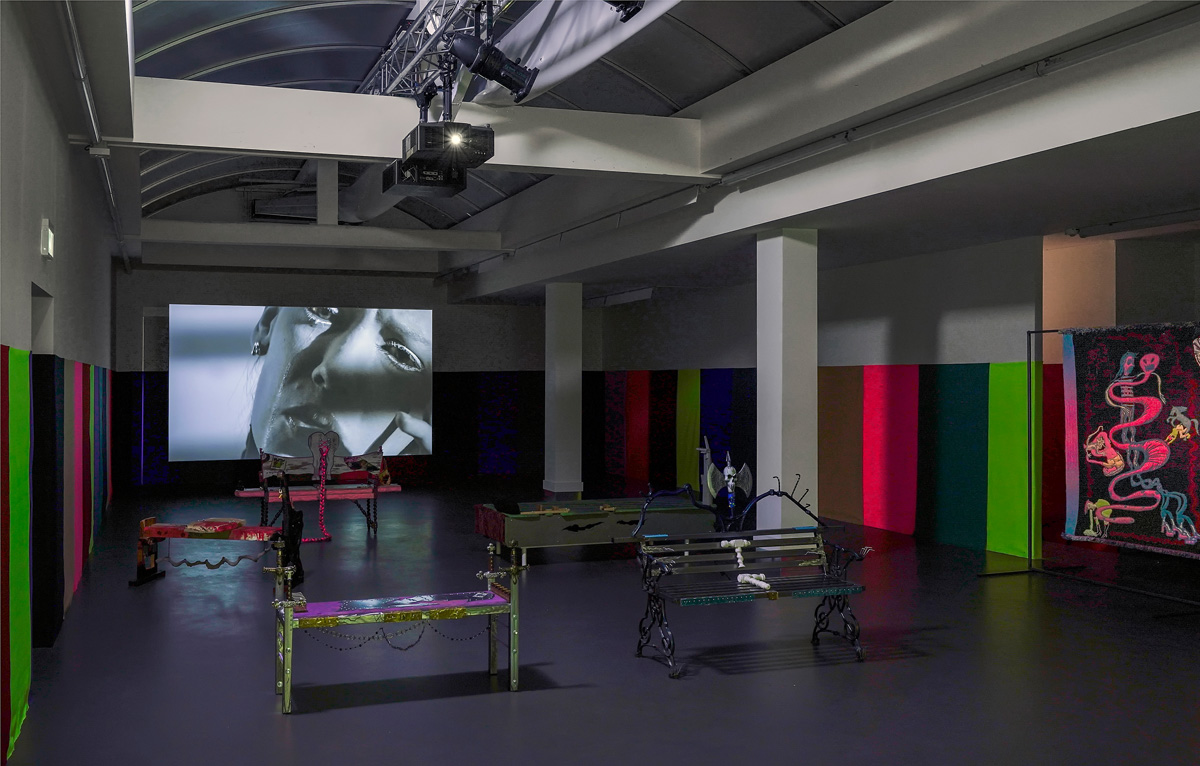 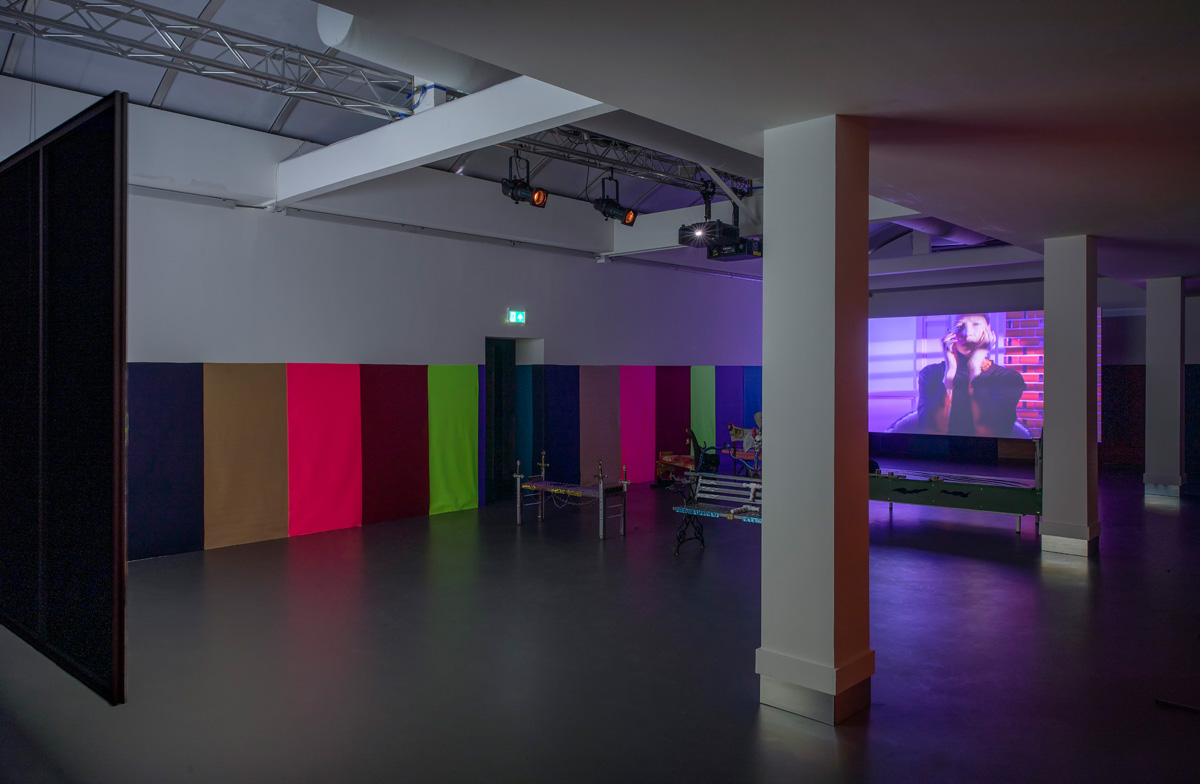 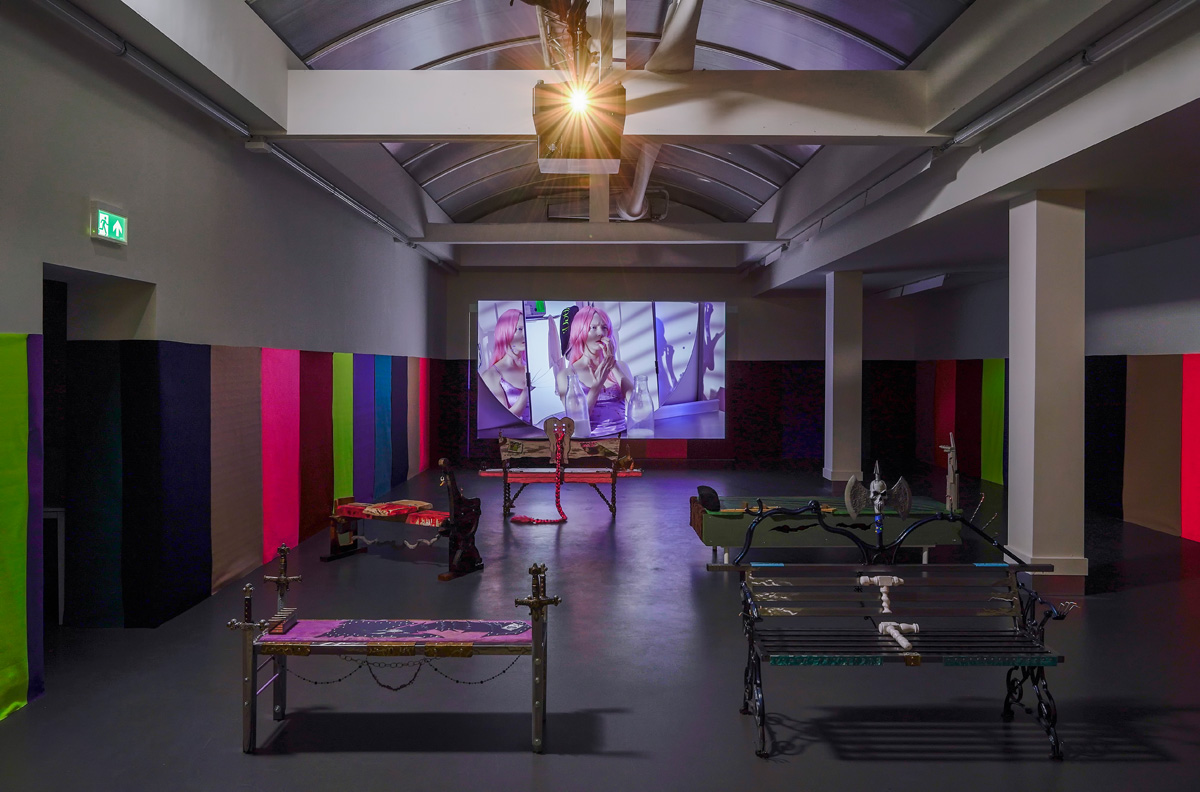 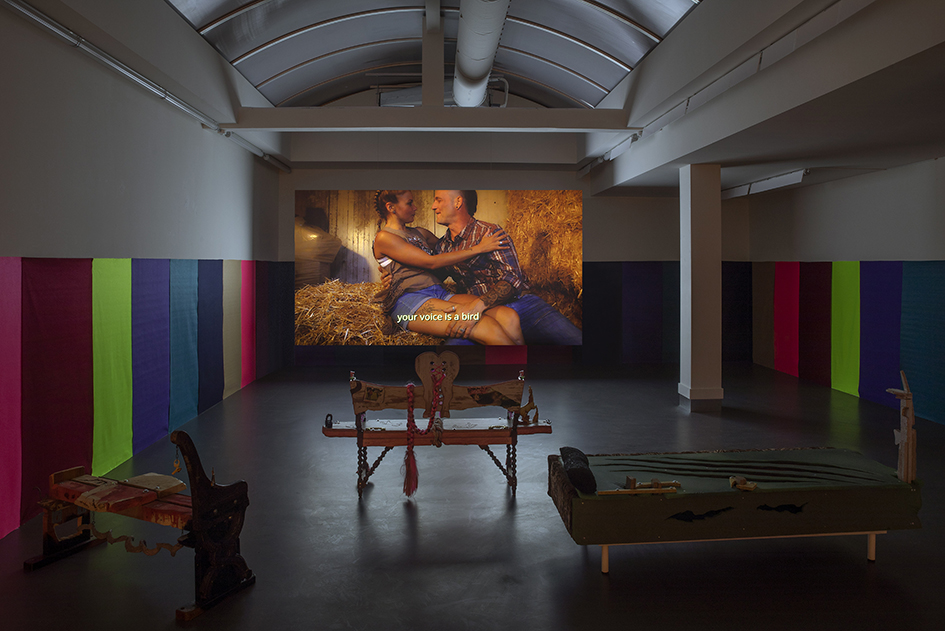 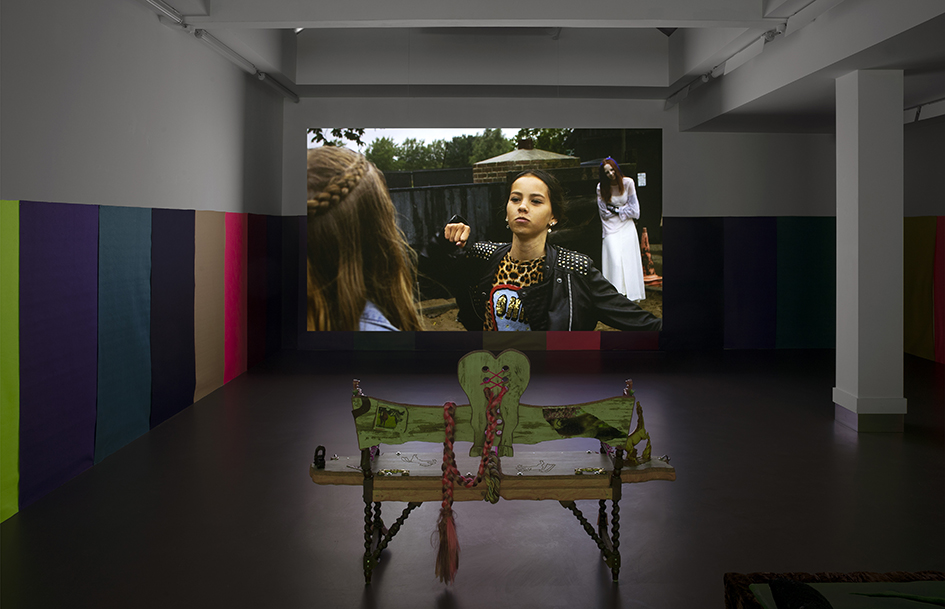 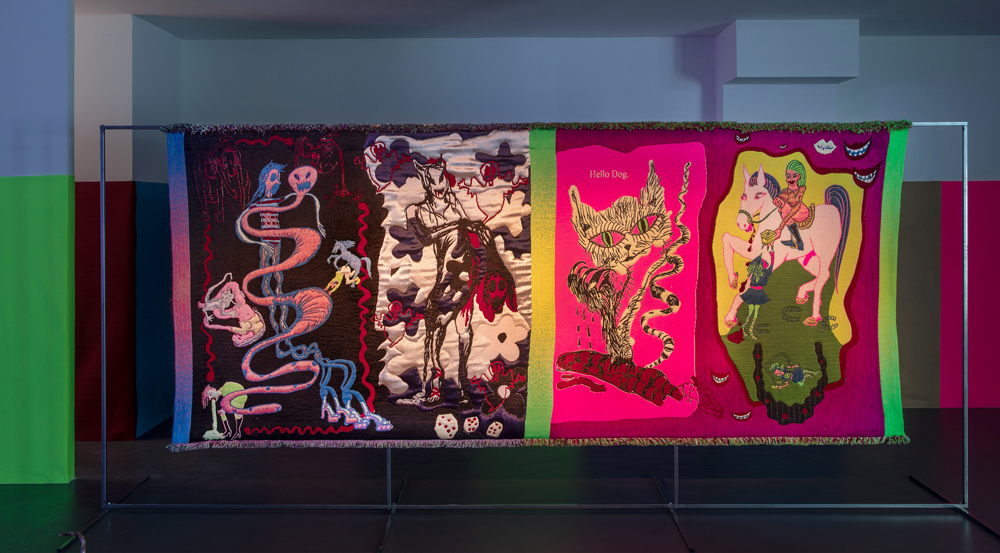 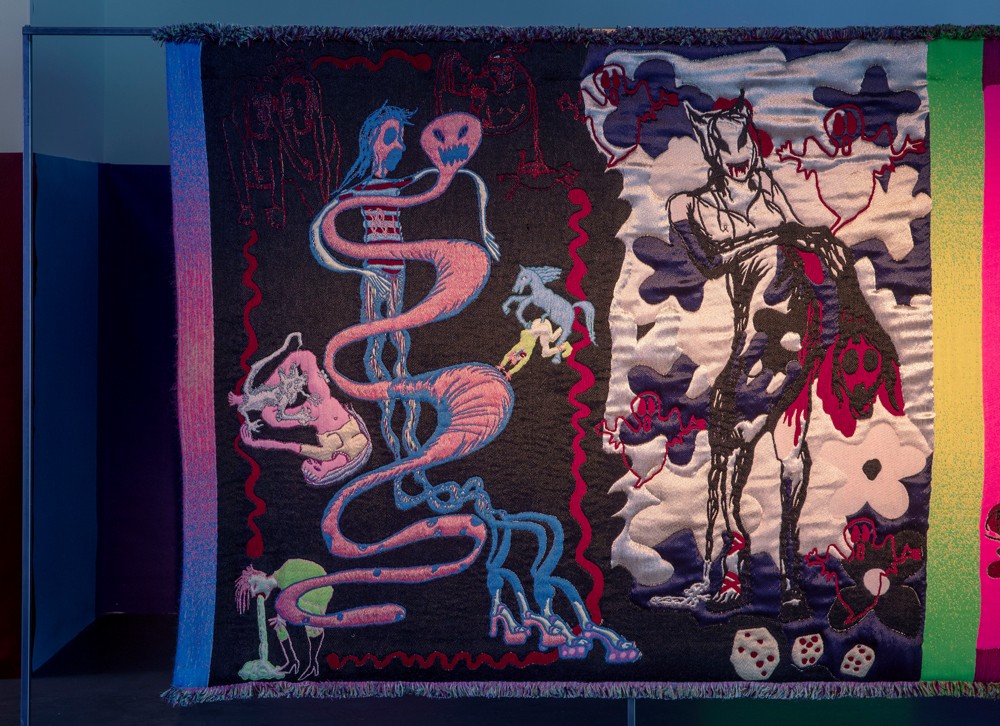 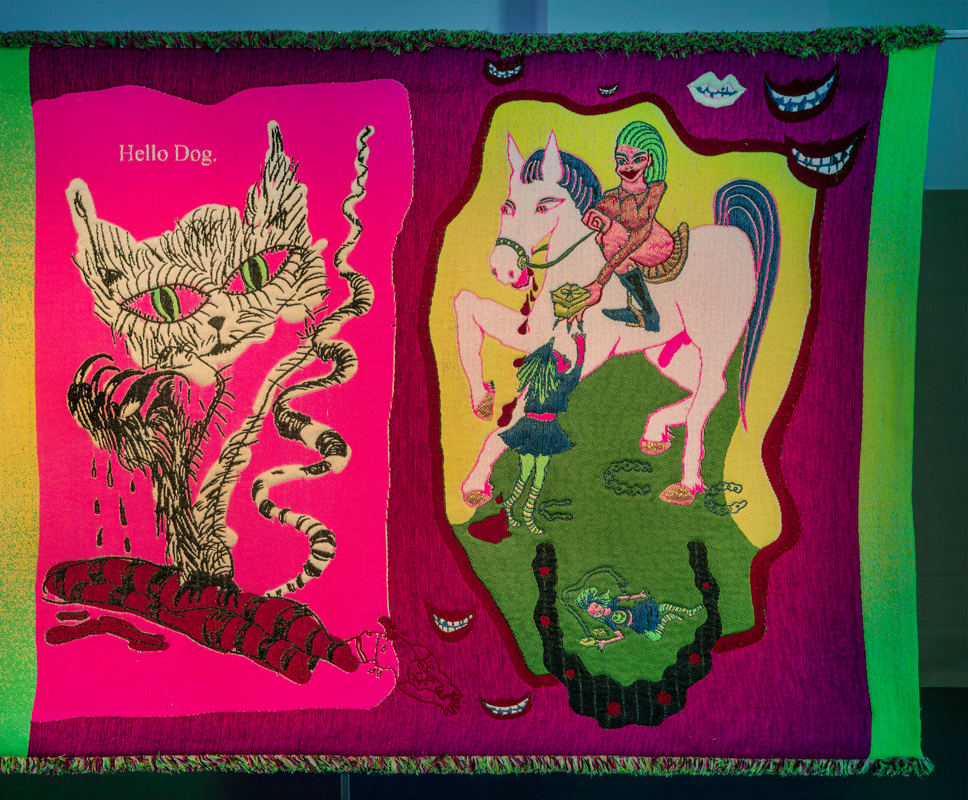 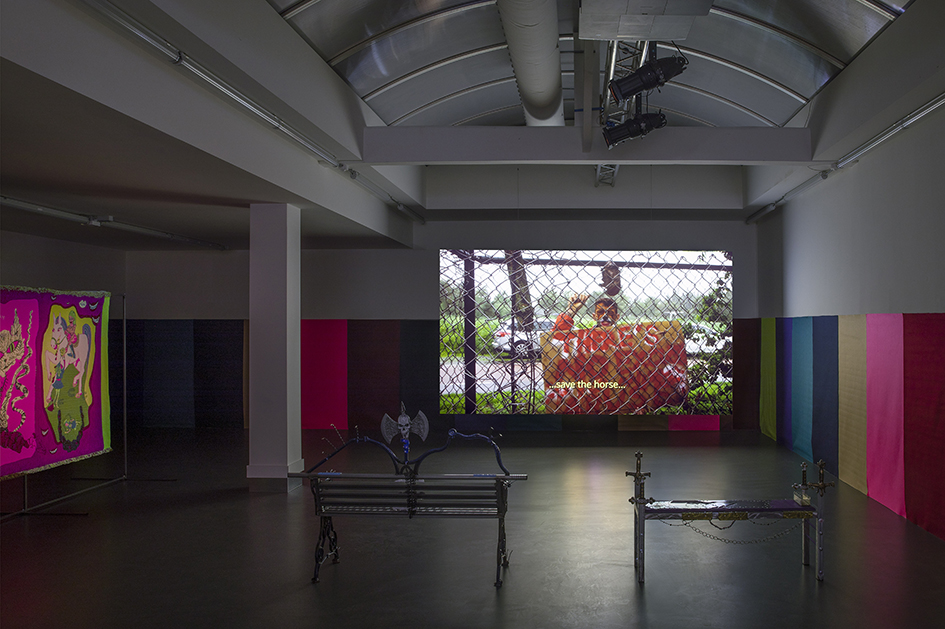 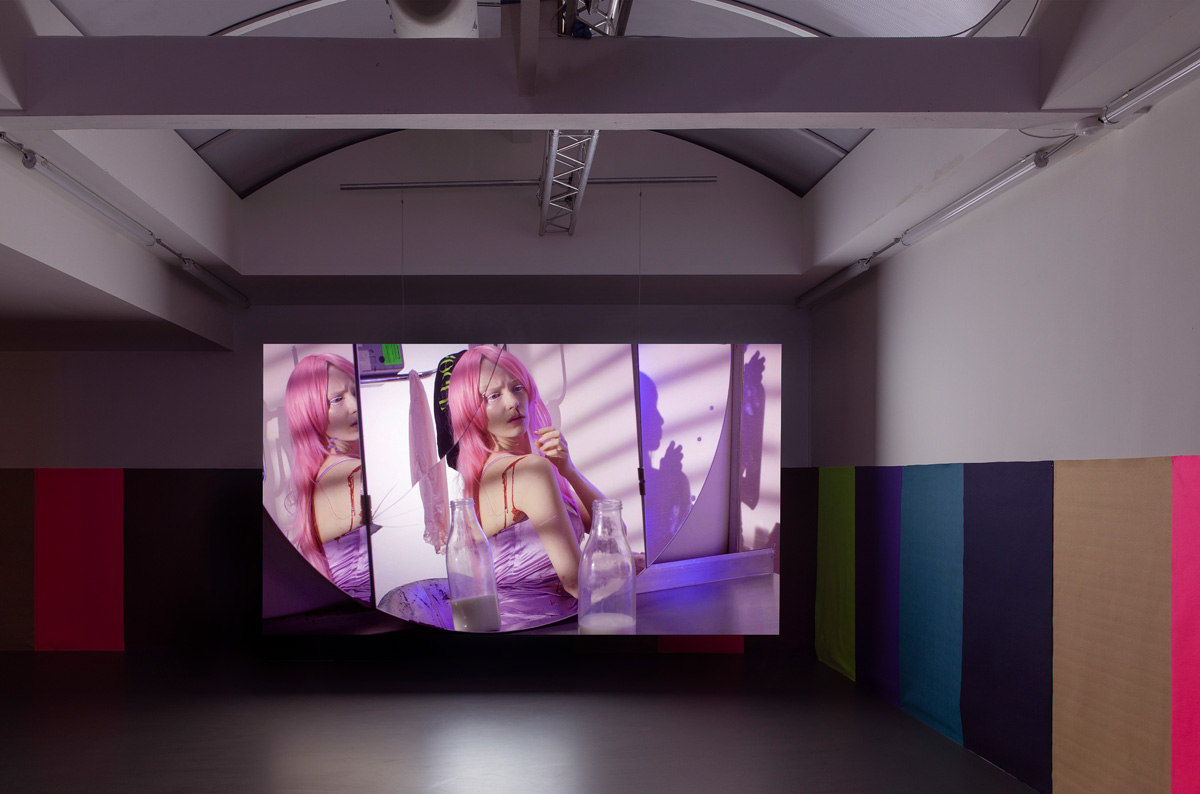 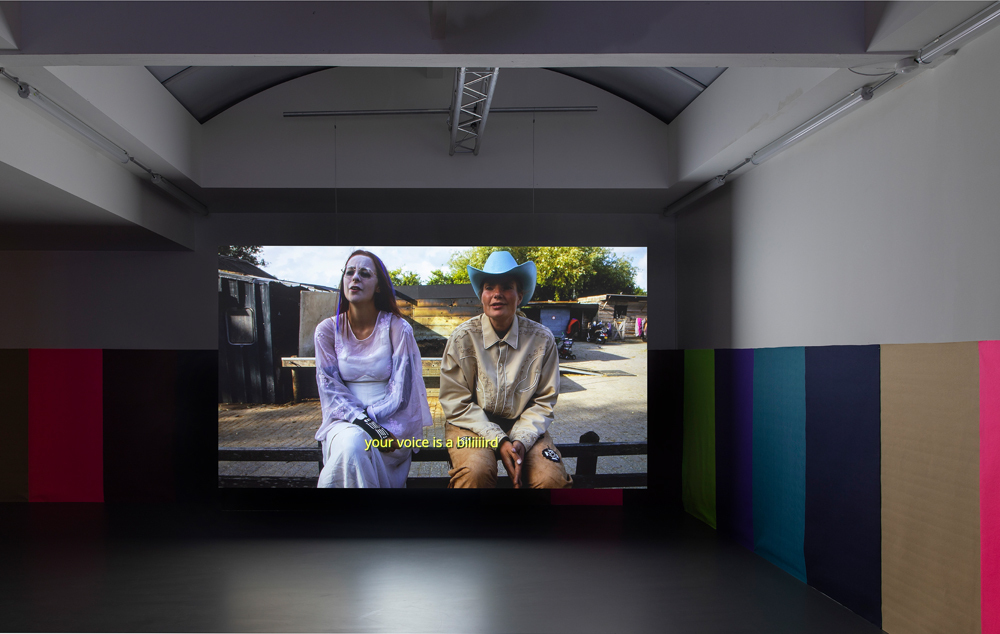 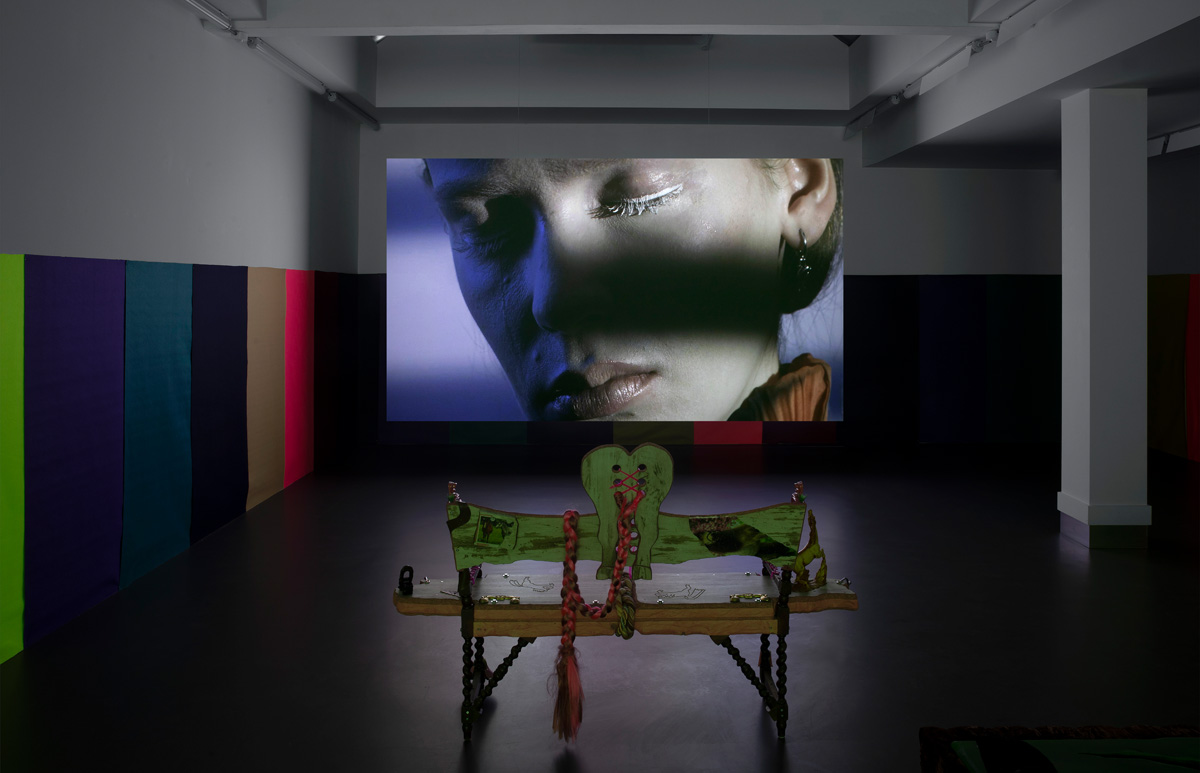 The Language of the Girl Is Blood: On Frenemies (2022)

Allow me to describe a room to you. Don’t worry – this won’t be a strenuous exercise. In fact, I think you’ll like it here. The walls of the room, for starters, are decorated like pinstriped socks, with vertical stripes of magenta, turquoise, and green. They remind you of the socks you’d order from a catalogue – the type of socks that girls would wear. Do you remember the excitement, of being underage and receiving mail?

Now, follow me inside. Close to the entrance of the room, you’ll find four tapestries. There’s one of a cat, a dog, a horse, and a fantasy creature – those central actors of the imaginary realm of the girl. On one of the tapestries, the one with the fantasy creature, there’s a woman vomiting all over her leather boots. Elsewhere, in the margins of that same fabric, there’s a genderless figure being fucked by a horse. The tapestry shows us both expulsion and penetration – the two main ways for the body to transgress. Is this what girls want? No. It’s the adult perversion of the girl fantasy, the kind that’s so often found in porn. Consider the cheerleader, the babysitter, and the waitress, and how they become the focal point of a fetishized banality. This is not how True Girls see their bodies, of course. A True Girl is a stranger to both fetish and banality. True cheerleaders, babysitters, and waitresses, they’re just doing their job. Their love for the cat, the dog, the horse, is ”pure” – for now.

Remember the first time you ever had to put down an animal? It’s a rite of passage, to feel the body stiffen, to feel the fur go cold. If you’re lucky, a dead animal is the first death you’ll meet. Some children like to put mice in a plastic bag and slam the bag against a wall, hard. And repeatedly. In killing these small animals, the children demonstrate their grit. Their potential for violence. The cold people they could become – if they worked for it. Death is a life event. It shapes you, like pop music, like pedagogy.

But you already know all of this, or you wouldn’t be here.

Why don’t you take a seat? When I first arrived here, I tried all the benches in the room. I sat on the cutesy pink bench with the horse sculpture, and then on the gothy one with the spikes and the skulls. Being a grown woman, I felt comfortable sitting on both – but maybe your identity is less flexible than mine. There’s something about these benches that underlines the heavy metal of the girlish: in that True Girls are innately drawn to visions of blood.

Now, don’t be alarmed. There’s a reason this room is entrenched in darkness.

In this room, there are two videos. They’re playing on opposite sides of the room, in a constant loop, as if they’re having a conversation with each other. The videos are about the violence – and the eroticism – of growing up. Of peer pressure and humiliation, of belonging and exile. Of saying goodbye to a body that you love very much.

The first video is Josefin Arnell’s Wild Filly Story (2020). In this work, the horse stable – that institute where many girls first learn to dote – is used as a metaphorical arena for feminine power play. It follows various pre-pubescent girls with braces and dreams, and the older women who teach these girls how to ride. In particular, it follows the events of a day on which one of the girls’ favorite horses is taken away to be slaughtered. Horse meat – the ultimate destruction of the girl fantasy. Arnell intersperses close-ups of hamburgers with images of a horse running free. The meal that the slaughtered horse ends up as is presented to us as both abject and fun, as the excuse for a carnivalesque gathering. The main girl of the show – our protagonist, with a perpetual nosebleed – winces as her cheeks are squeezed by a middle- aged man – he’s in charge of the grill. Flies buzz around the girl and her horse-riding friends, as if the lot of them are already dead. One of them knows Satan’s home number.

The blood streaming from this girl’s nose, is it biblical? Does it redeem her of some- thing? Hurt as she looks, she’s not bleeding from that other hole – the one we so classically associate with girlhood, its bleeding a harbinger of fertility. That other blood is a forbearer of both horrible and delightful things. But this blood, the one that’s dripping from the girl’s nostrils – and her friends’, once she gets her hands on them – feels like a different type of initiation. A crash course in human ferocity. You’re never going to see your horse again. She’s go- ing to taste very good. In allowing their blood to flow, the girls in Wild Filly Story discover the grounds on which the things they cherish – including each other and themselves – may be violated.

In the second video, Ashes by Margaret Haines (2022), blood is neither redemptive nor educational. Here, it’s not girls bleeding in unison but a grown woman alone, sitting in front of a mirror. She’s tending a fresh nosebleed – again, the more intimate holes are spared – and appears to lament the liquid oozing from her. She is, in other words, aware of her wound – and dreads it. Then again, she sucks on her vape pen with total composure. She is verbally eloquent, contemplative. She is both dramatic and blasé about being flesh. Meanwhile, a sun- set burns threateningly.

The woman in the mirror, she might be the grown version of the horse girls in Arnell’s video. She already knows the consequences of her own body – no further initiation is necessary. Perhaps that is why she appears so fearful, under her veneer of nonchalance? Because she knows that for her, no further matriculation is possible. She already reached the full potential of her feminine appeal. From here on out, decay is her only change. The blood may signal this incoming end of girlishness – the process from fertile body to “ripe” age.

These two videos in conversation, what are they talking about? About girlhood being a simultaneous process of assembling and dismantling. Friendships are forged, as well as dreams and expectations, only to be undone again at a similar speed. When you live as fast as girls do, alliances are deceptive. Someone who is trustworthy today may be an enemy tomorrow – including the body, that bleeds and leaks at lunar intervals. And then, just as the girl is used to her girl body, the skin she has become accustomed to starts to wrinkle. She learns that her transformation is perennially ongoing. No wonder the woman in Ashes is projecting her despair onto a mirror... She knows she’s about to be excluded from a profound and spiritual process. And that the culprit of her forced exile, her removal from the realm of power (be it institutional or existential), is her female form. Without this bleeding body, she would still be in paradise – riding horses, perhaps.

Look at that tapestry of the horse again. See how that woman riding the horse is half- naked? She’s holding out a gift to the young girl that stands beside her. The girl is holding her arms outstretched. She’s ready to receive whatever the woman wants to give her. It’s a hopeful scene, if you’re uncritical – if you only consider the moment of transaction. Because further down the tapestry, another young girl lies trampled (to death, presumably). And the horse the woman is riding is bleeding from its mouth. How generous is the transfer of a gift, if it means that some people have to suffer for it?

Consider the word “frenemy.” A frenemy is someone you are nice to despite hating them. You probably had plenty of them when you were a child. Unlike us, the autonomous adults, children are dependent on their circumstances for the possible friendships available to them. They cannot ‘seek out’ or ‘actively choose’ their allies – whomever they are sat besides, they’ll accompany. As a child, it’s possible to care nothing about a face – a person – you see every day. And when the moment of separation comes (goodbye, enjoy your new school!), the child will feel nothing in turn. It’s a cruelty most adults are incapable of, if you think about it.

But as an adult, you know that your time amongst the people you like is limited. You know that your body is a machine that’ll one day break down. And you know that the breaking down of the machine is often signaled by blood – by its sudden arrival, by its pulsing from a wound. Once you become familiar with the blood, your priorities shift. You start looking for intricate meanings in (hitherto) arbitrary signs. A full moon after a long day feels like a prize. A dead bird on the sidewalk, a horrible omen.

Who can afford to have frenemies when the wound is real? When the body is already bleeding? Girls do, our cultural models suggest. And so do Arnell and Haines, perhaps, in their esoteric explorations of feminine flesh, in which the blood is both a connecting force and a catalyst for banishment. But the work by these artists isn’t pointing fingers at “society.” Nor do these artists posit girlhood as a sentimental state, something wholesome and cherry-flavored to belittle and laugh at. Whether it be a horse stable or a boudoir, the girls – the women – in these videos are participating in a self-made fantasy. Though their environments are sexualized, they escape pornography – they are too ungovernable to be available for projection. Instead, their communal bleeding is a protection spell, that refuses the disposal of the girl as woman.

If you stay in this room long enough, you’ll find the ingredients for the enchantment. They include a pack of nicotine gum; a handful of horse hair; a cup of fresh, human blood. Mix them together in the dark. Swallow the mixture during a sunset. Resist the urge to chew. Don’t vomit. Wait forever.