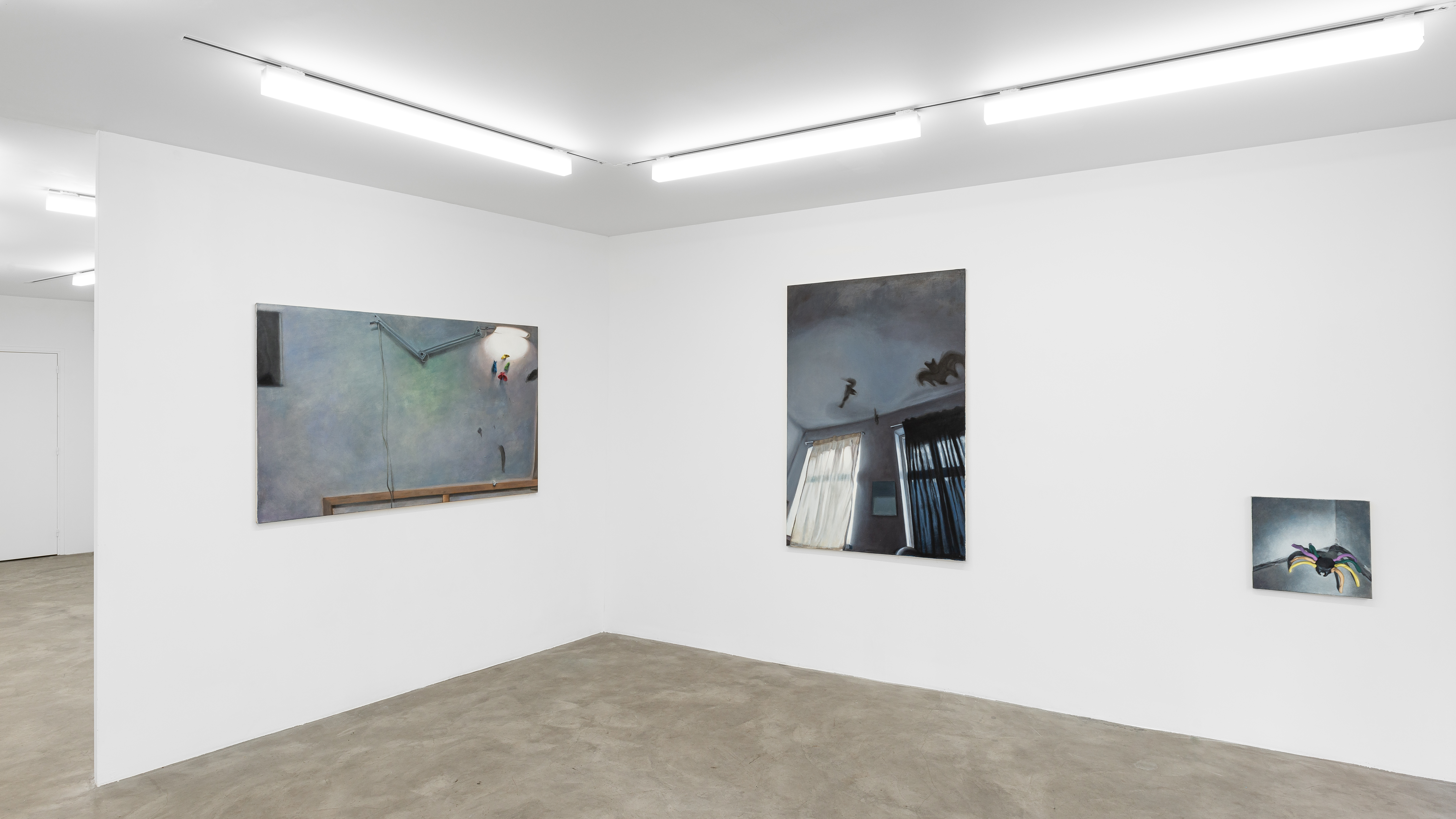 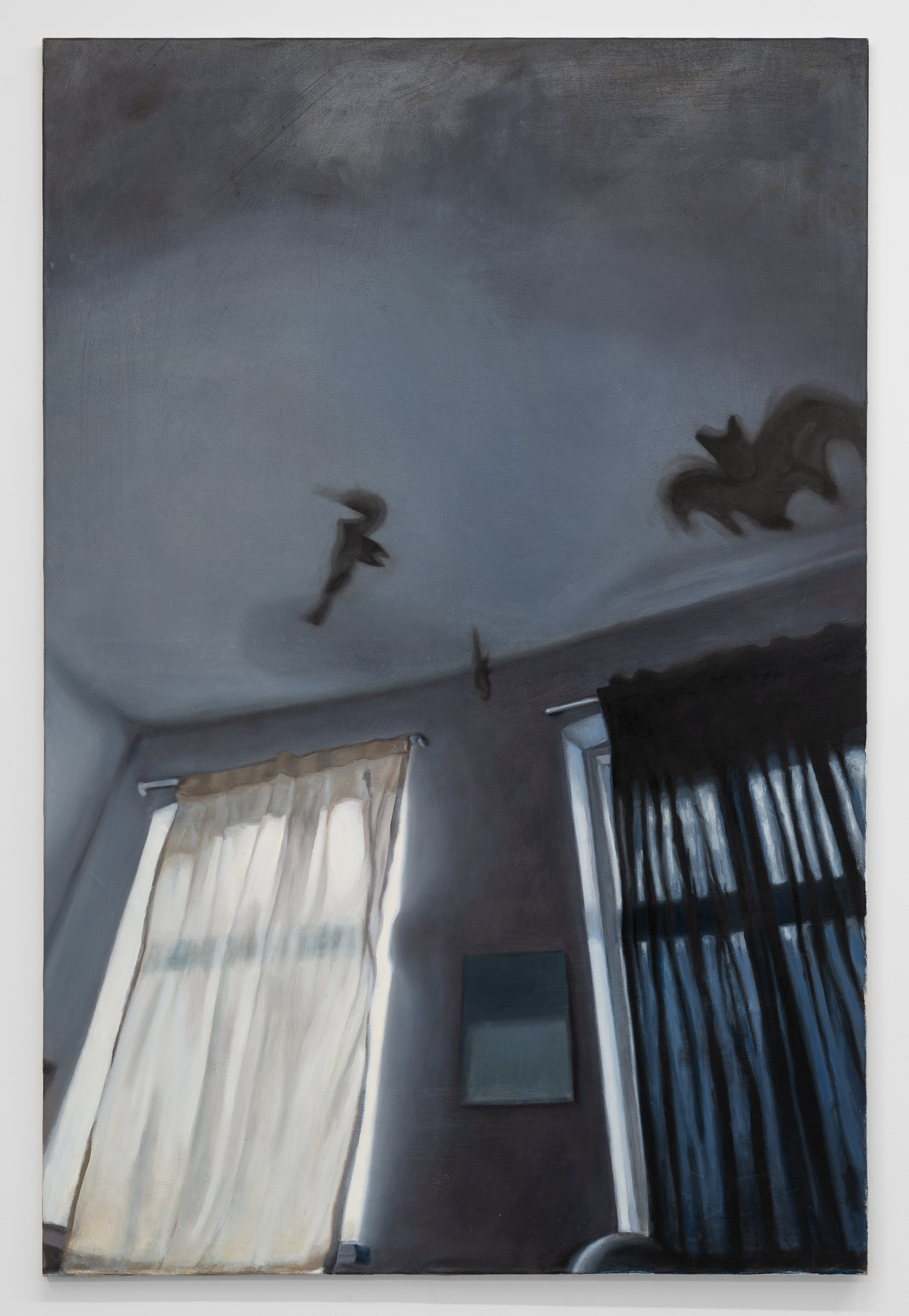 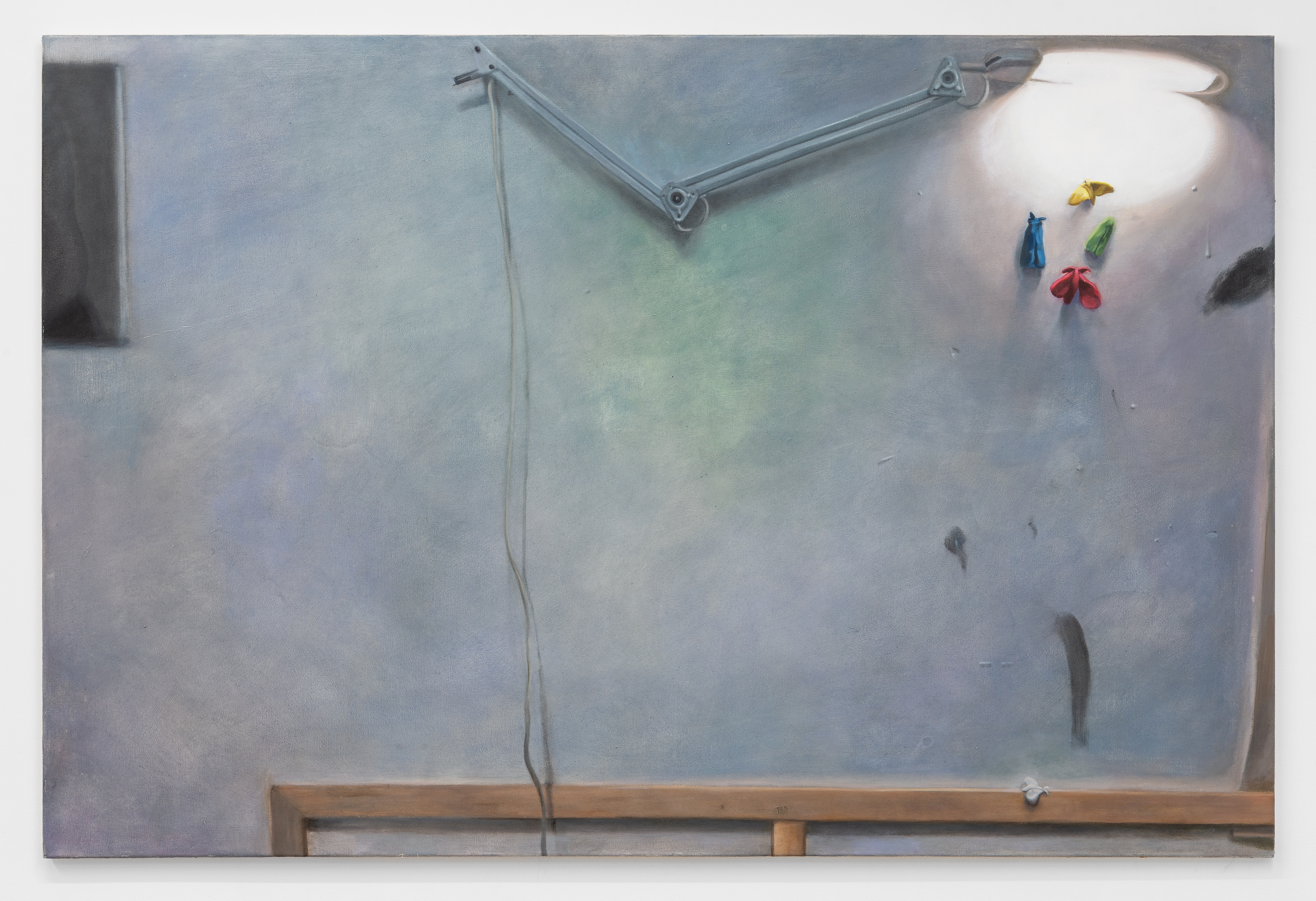 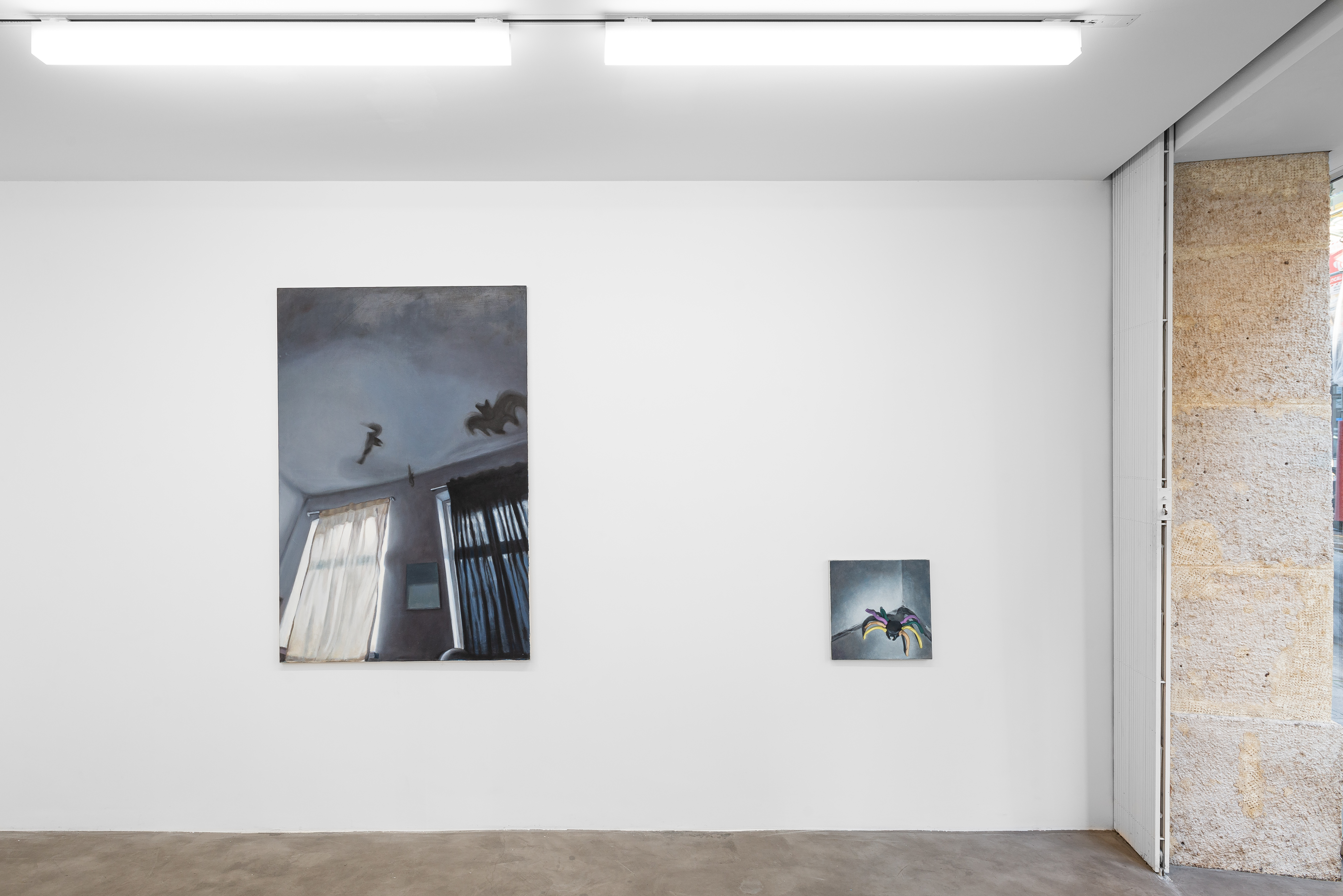 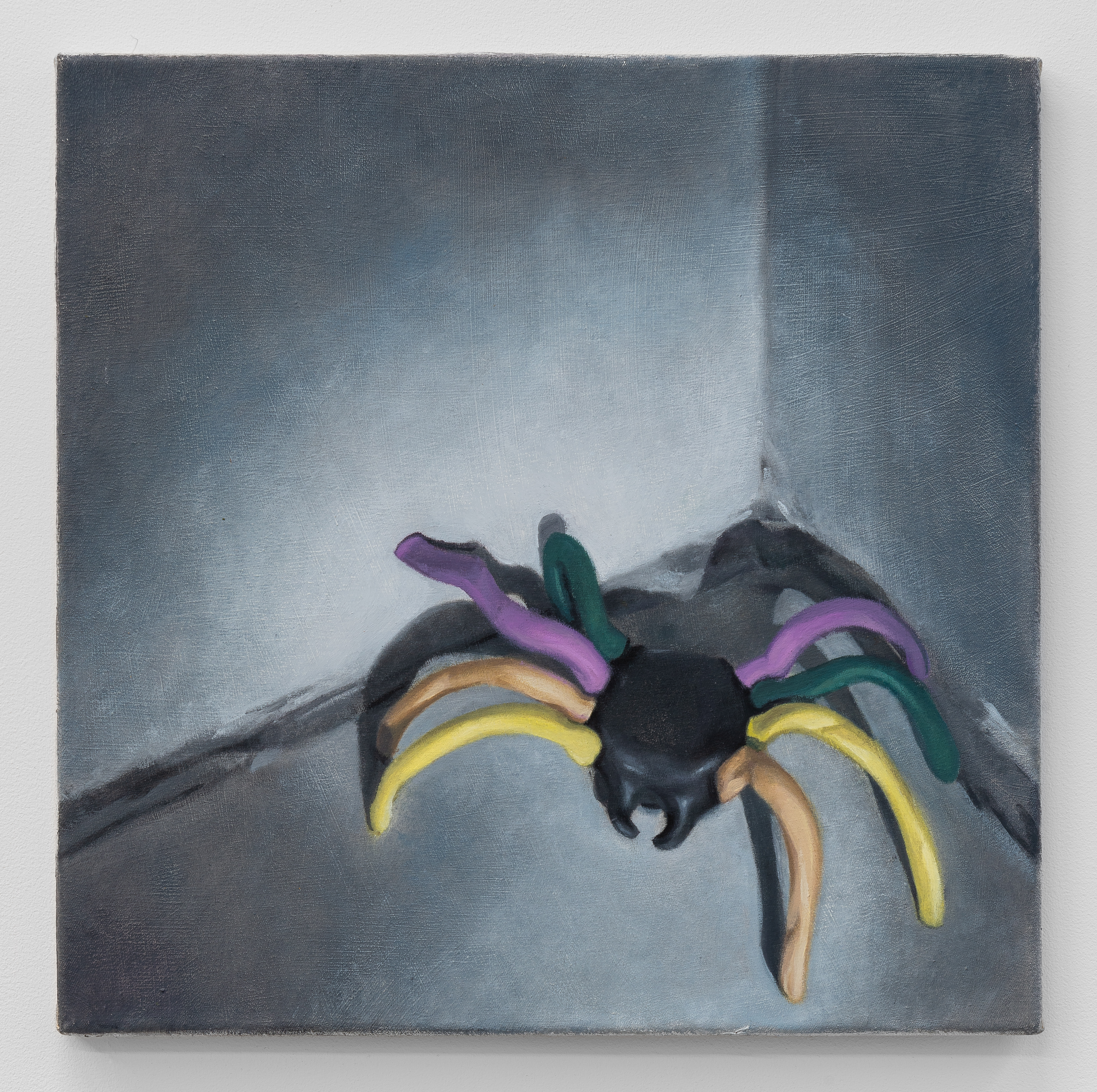 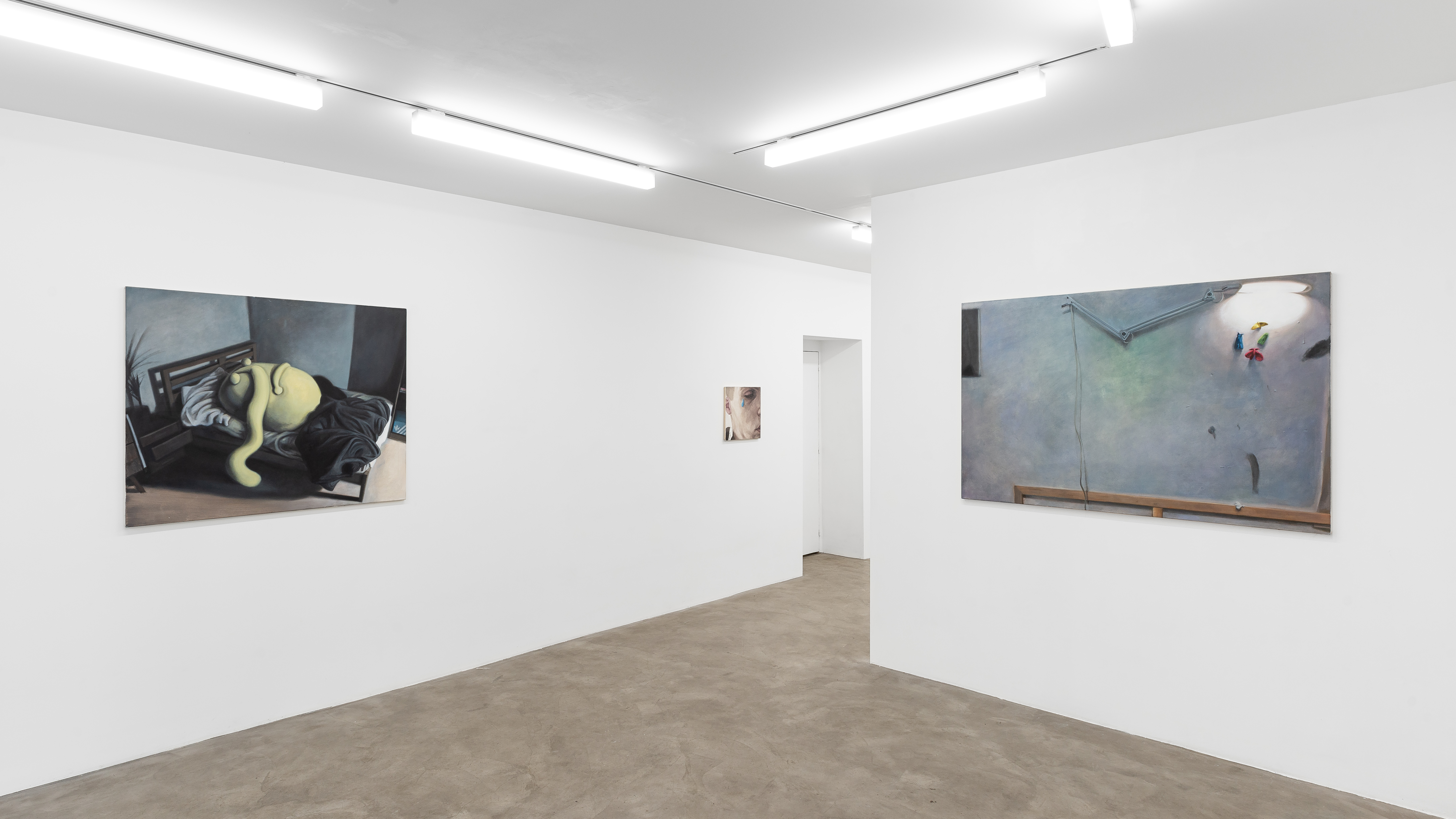 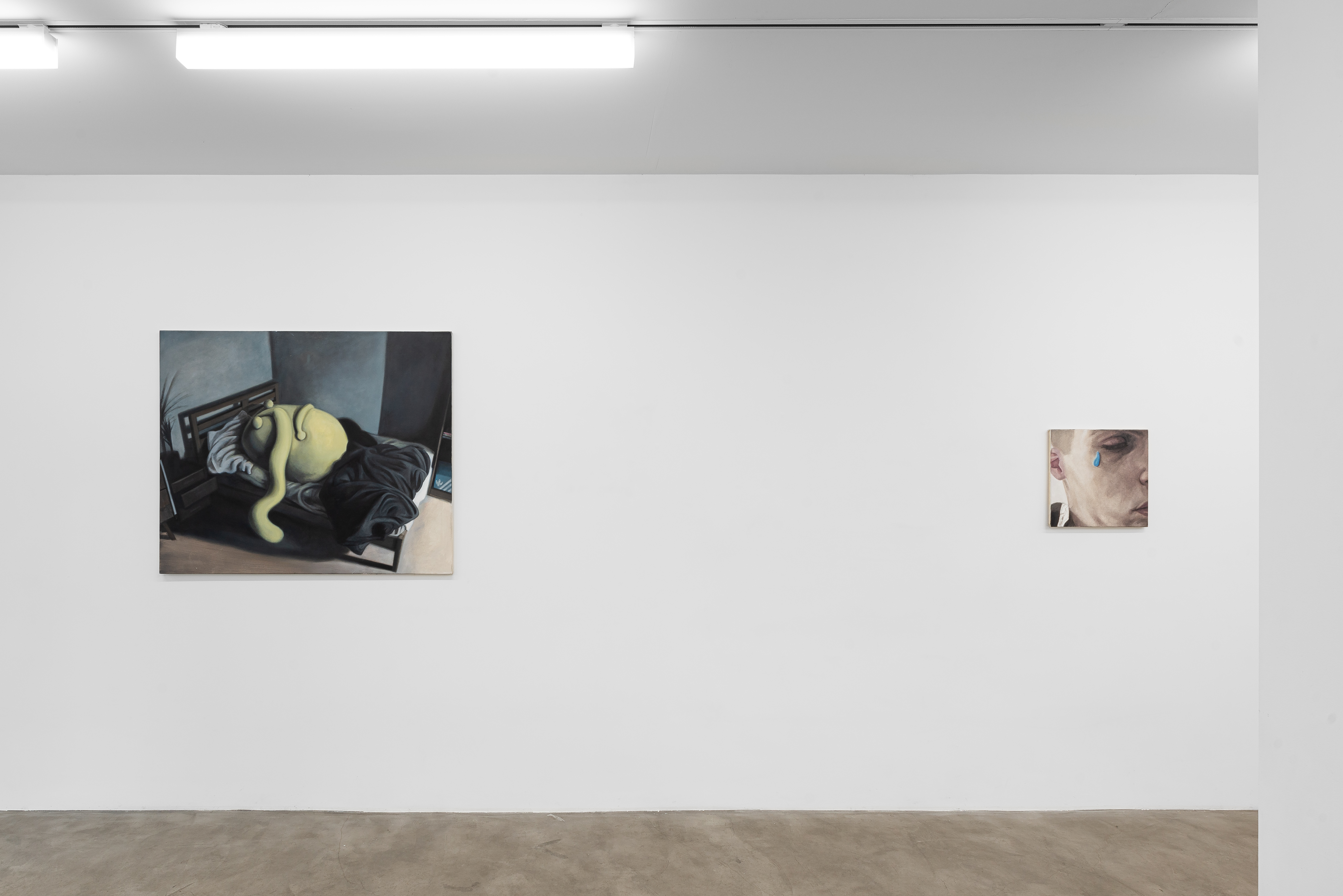 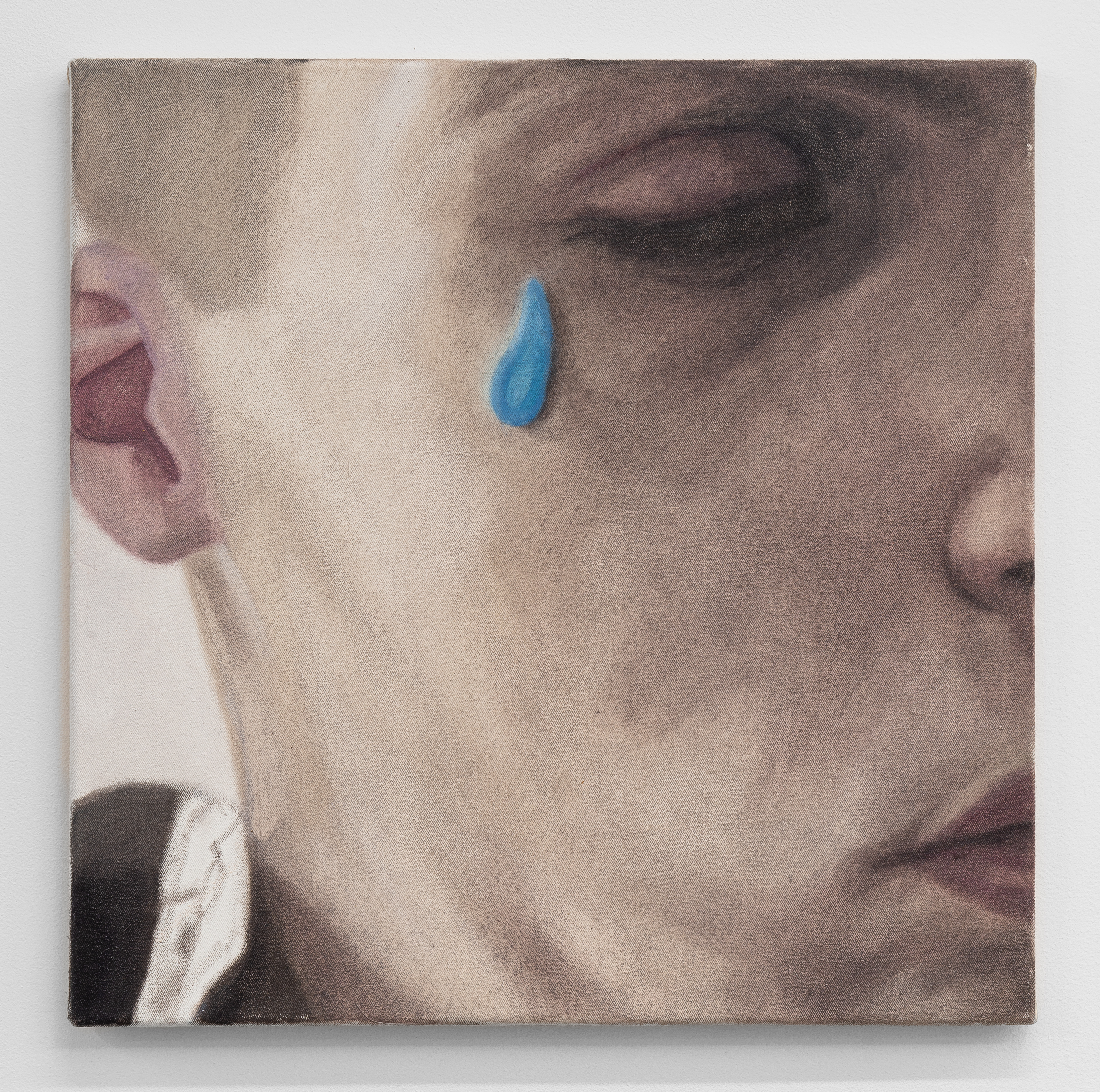 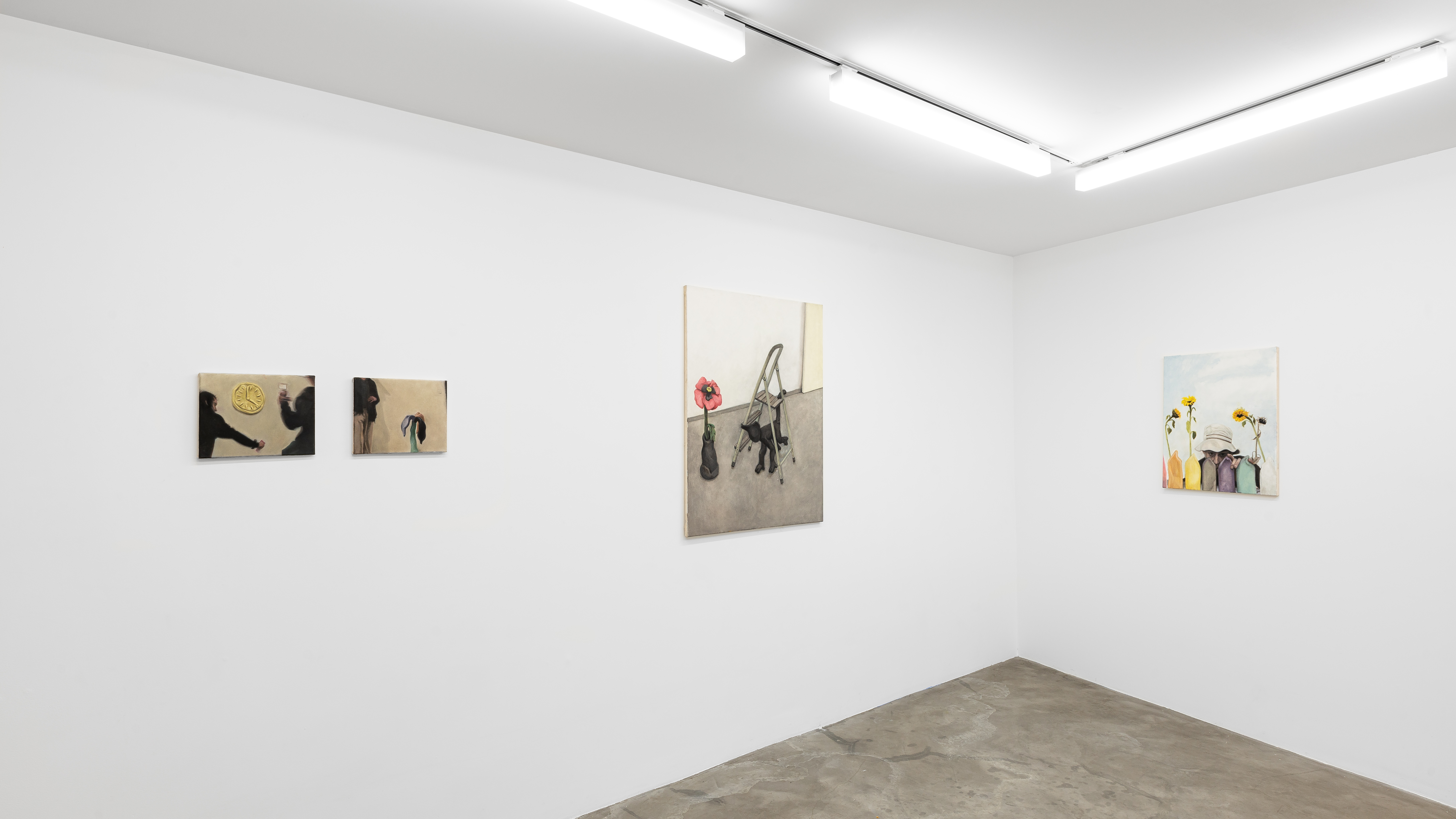 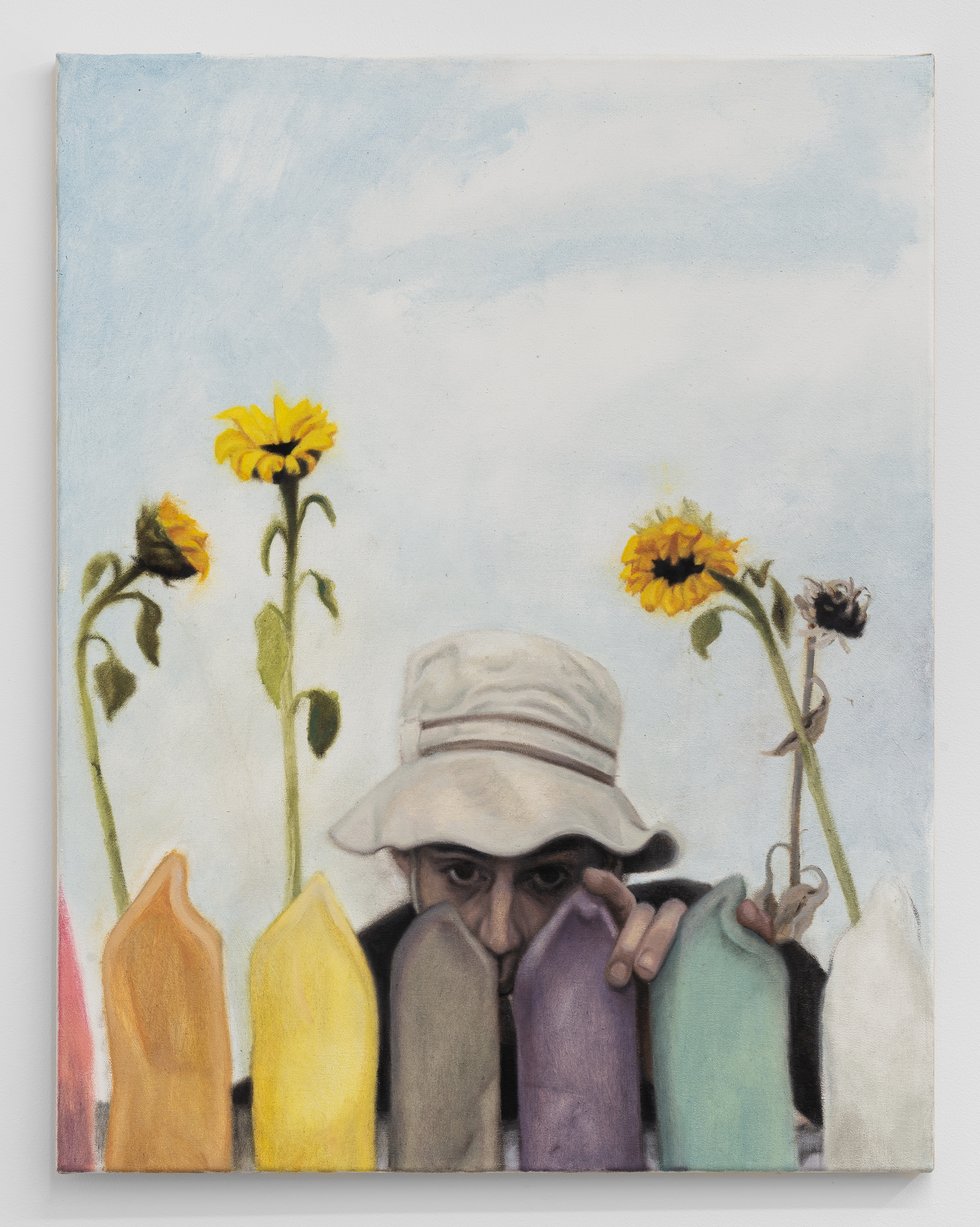 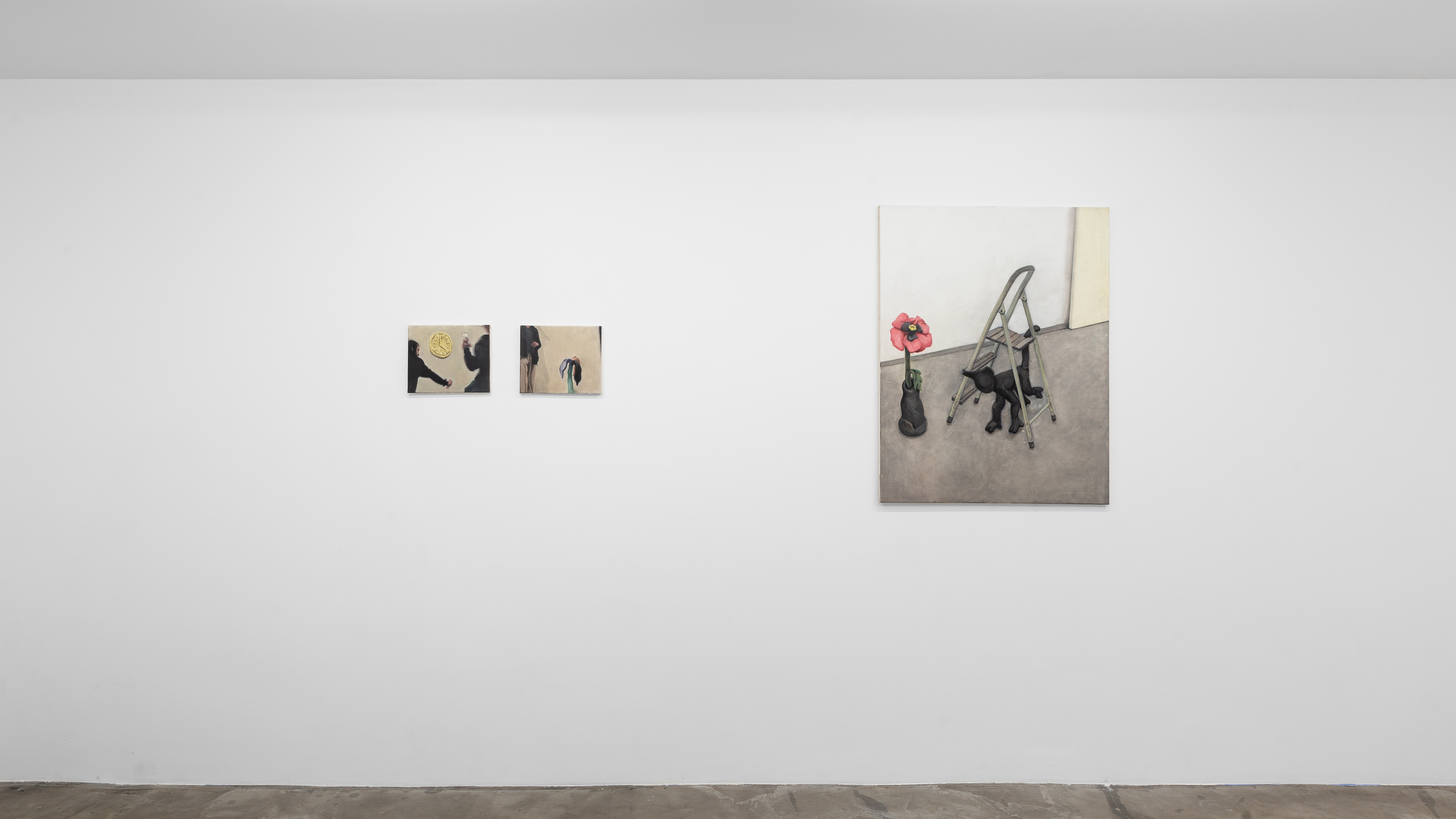 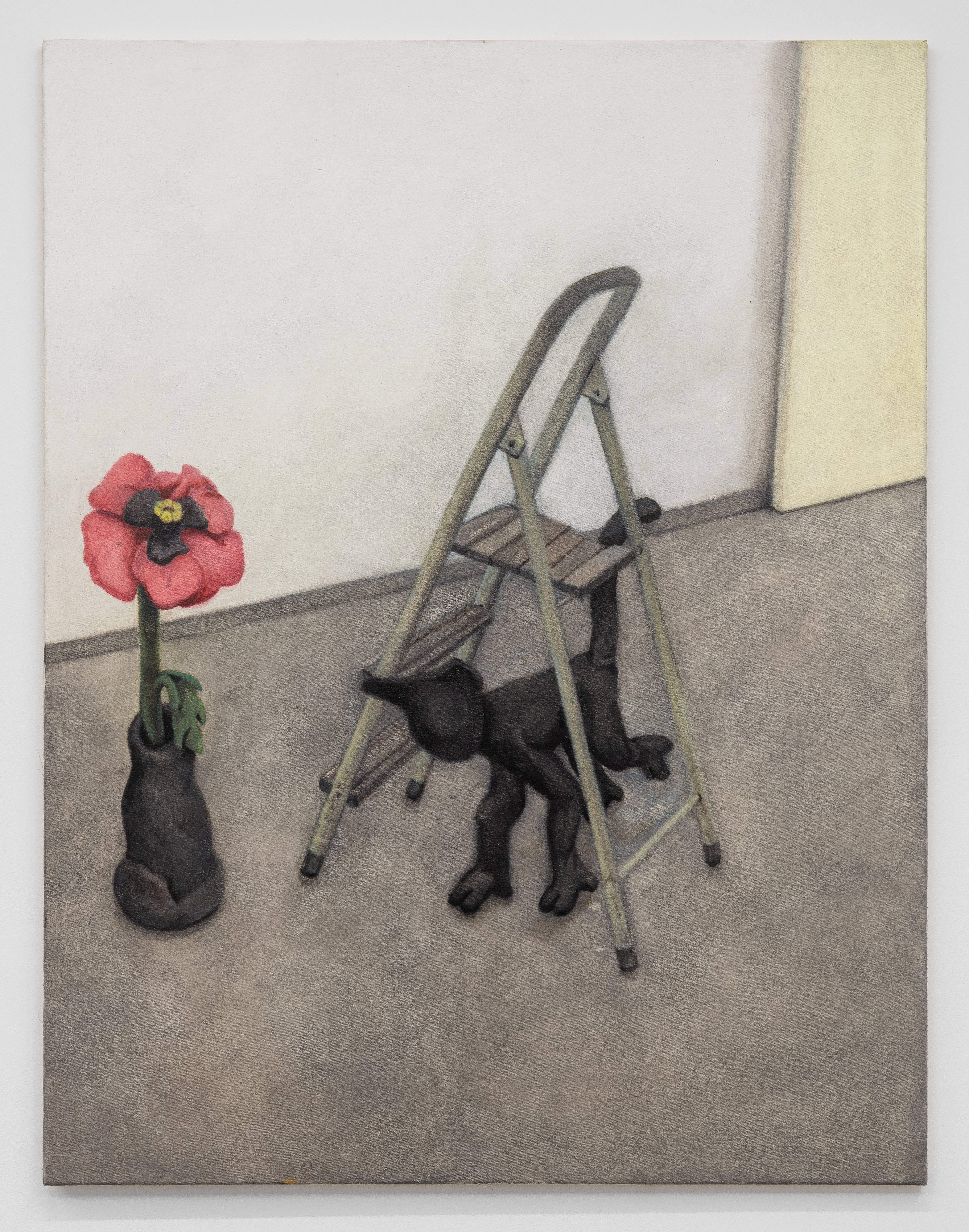 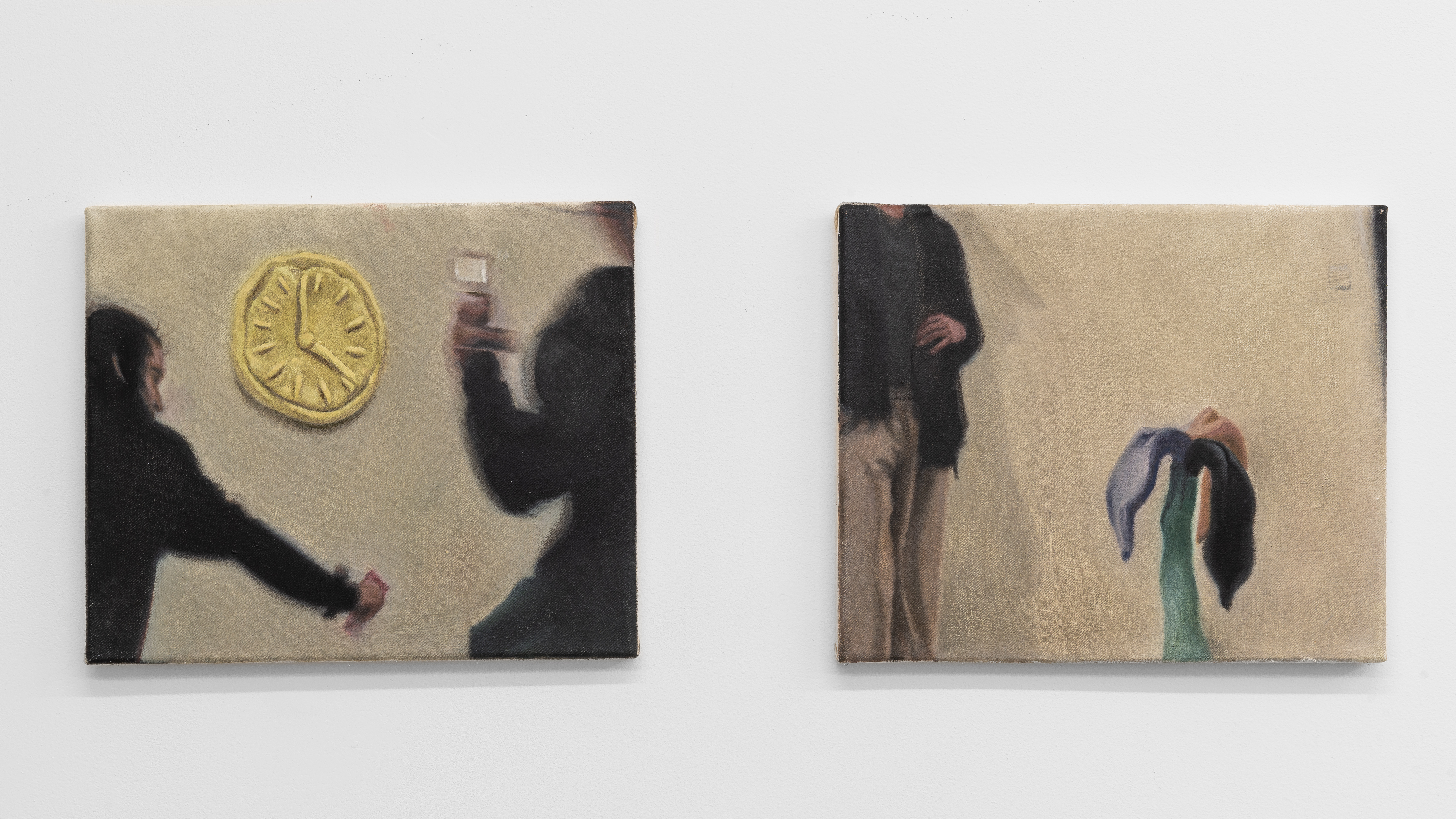 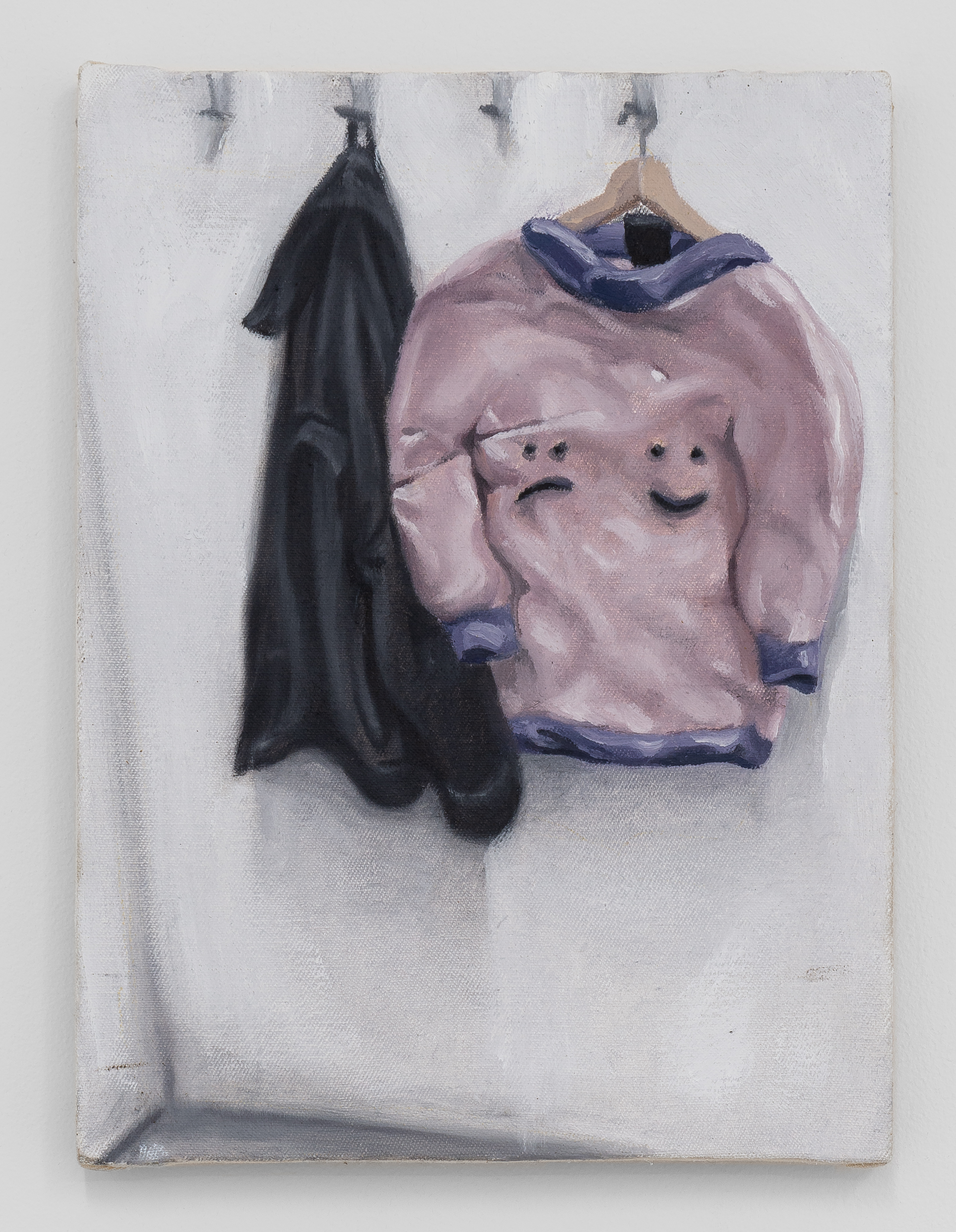 « In the era of the health crisis and lockdowns, how does one continue to make paintings from photos of « down time »,1 of letting go, and moments of nothingness where the dampness of clubs, the wisps of smoke and vapors of alcohol are amongst the characters to represent?

Torn from the Berlin parties he portrayed in his first solo exhibition Overexposure, Julian Simon presents here Softspots, a series of paintings born by accident – from the experience of lockdown.

Cut off from his lively subject matter, without the possibility of going to his studio, Julian Simon drew frantically: tracing, coloring, erasing and starting again to fill the vertigo of a halt to creating. Then, like a mania or a little inner music that appears to pass the time and quench solitude, he began to form mounds of eraser shavings like a machine. And it is precisely these « soft sculptures » that came to disrupt his usual practice as an attempt of redefining his artistic language.

Backhandedly, Softspots is a series of intimate paintings made up of layers of memories, dreams and mental sentences materialized by shapes formed from modeling clay. Flowers, cats and pendulums of an organic softness are embedded in anodyne scenes of life photographed then meticulously depicted. An interior cinema made of mental images in the setting of a figurative era, Softspots acts as a communication network between two usually parallel realities. Yet here, geography and temporality disintegrate and dissolve in the painting: the softness of the forms responds to that of the time that is stretched. In line with the surrealists, Julian Simon tries in his own way to reach the « sublime point », which in the words of André Breton is « the point of spirit from which life and death, the real and the imaginary, the past and the future, the communicable and the incommunicable [...] cease to be perceived contradictorily ».2

Childlike in their rough forms and pop colors, these figures contrast with the linearity of the realist scenes depicted in the background, just as reminiscences that become more embellished as time fades. Genre scenes, still lifes, landscape and portraits, even self- portraits, are all academic pictorial genres that Julian Simon diverts here.

The breakthrough of « soft sculptures » without much concern for coherence with the context disorients and tints each composition with mystery, weirdness and humor. By making these invisible memories as malleable as the clay they are made of, Julian Simon sets in motion a game of sensory perception that pokes fun at the viewer's interpretations, as seen in the work The blues I use. With this canvas constructed as the literal transposition of a word game, Julian Simon mocks himself and the psychologizing projections that can be made of him. Uncertainty about the future, melancholy about the past and questioning of his artistic practice, Julian Simon delivers his « soft spots » with malice and lightness.

The end of the party for the « photogenic painting »3 of Berlin's hot spots. Hello, sadness, introspection and self-mockery. Make way for the Softspots. It's going to go well. »