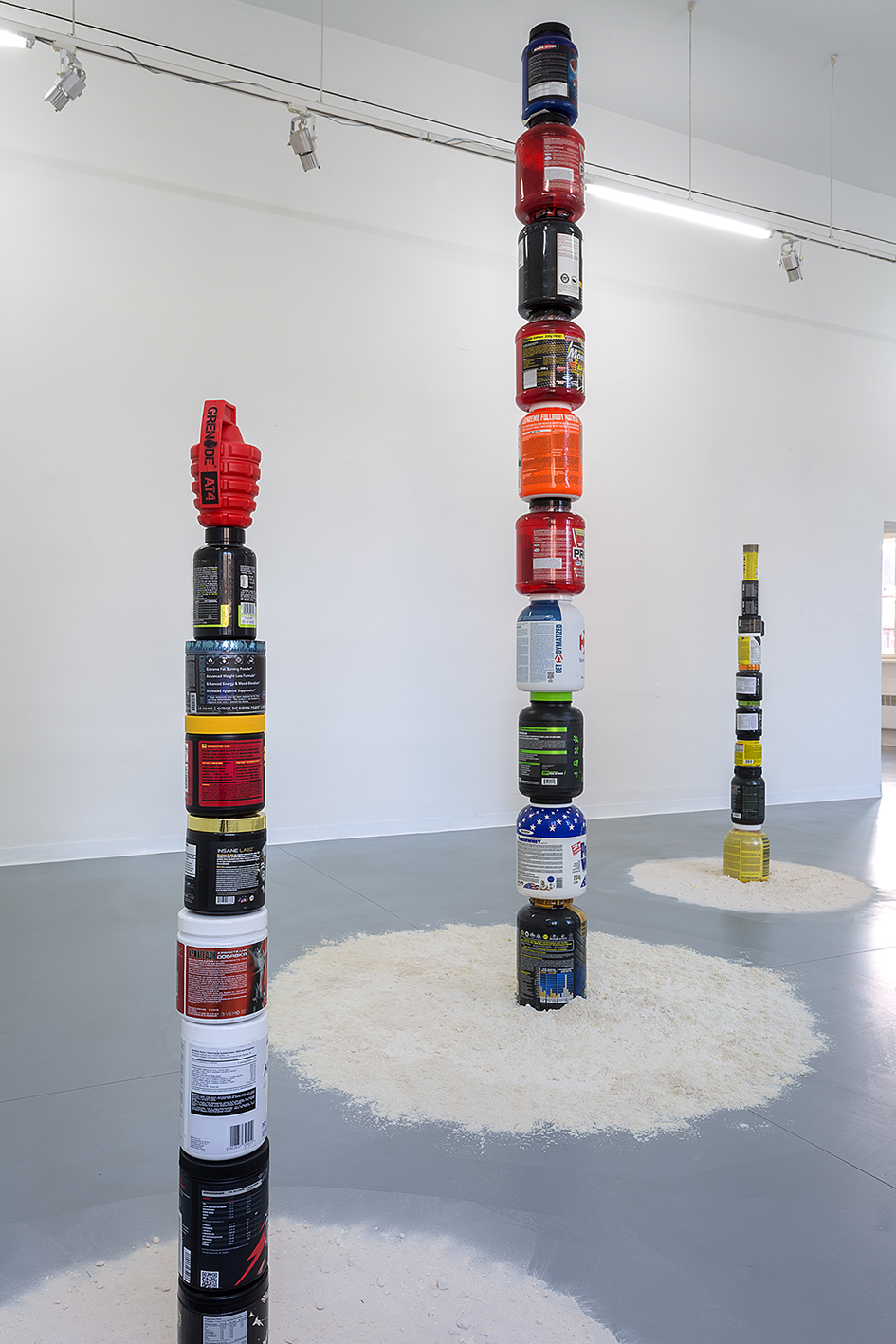 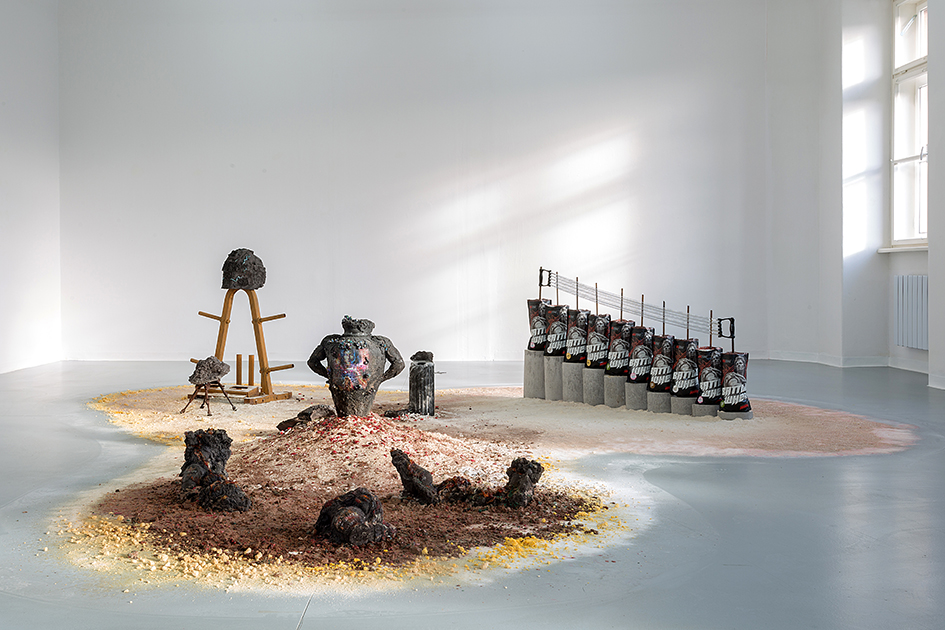 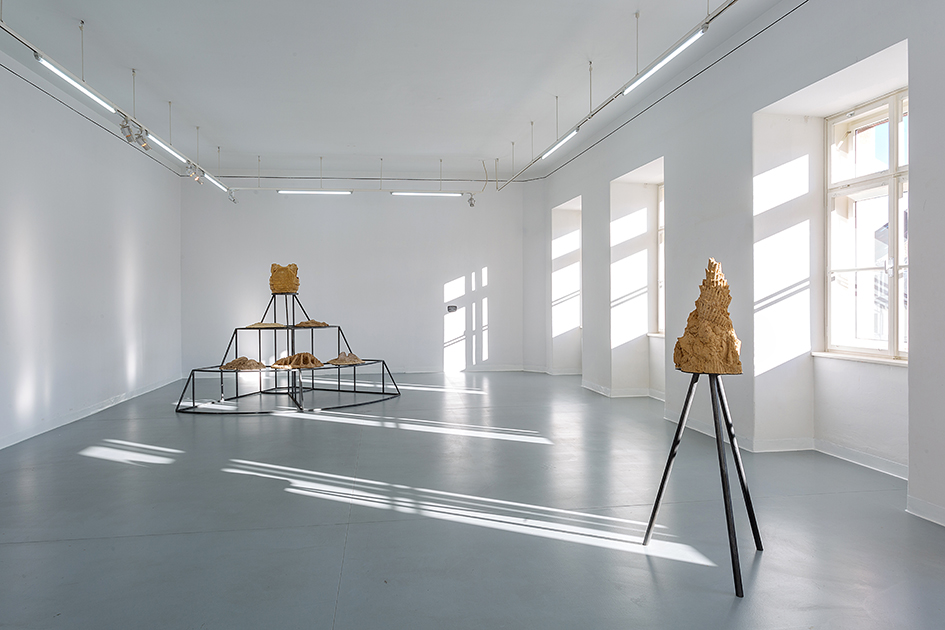 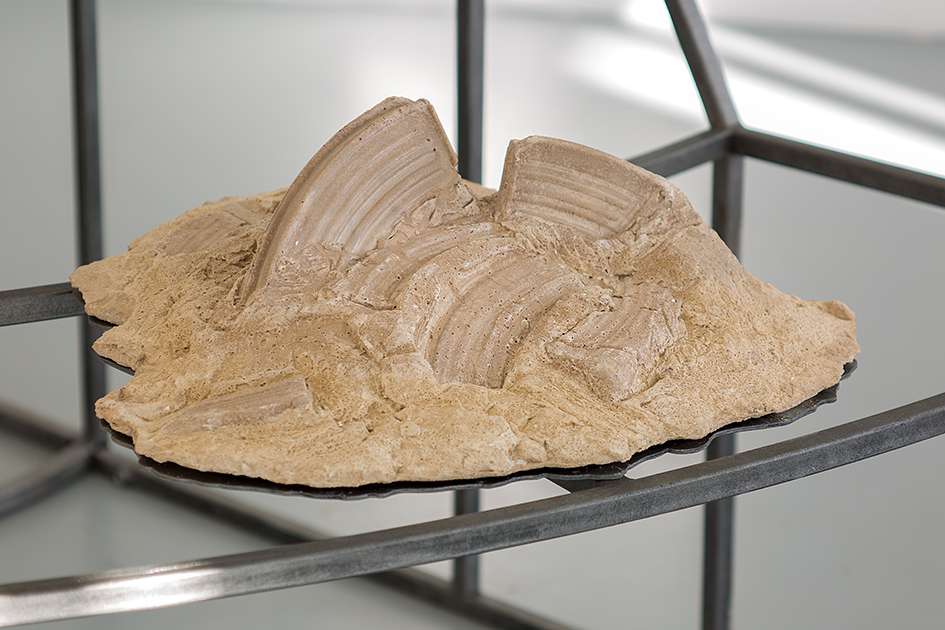 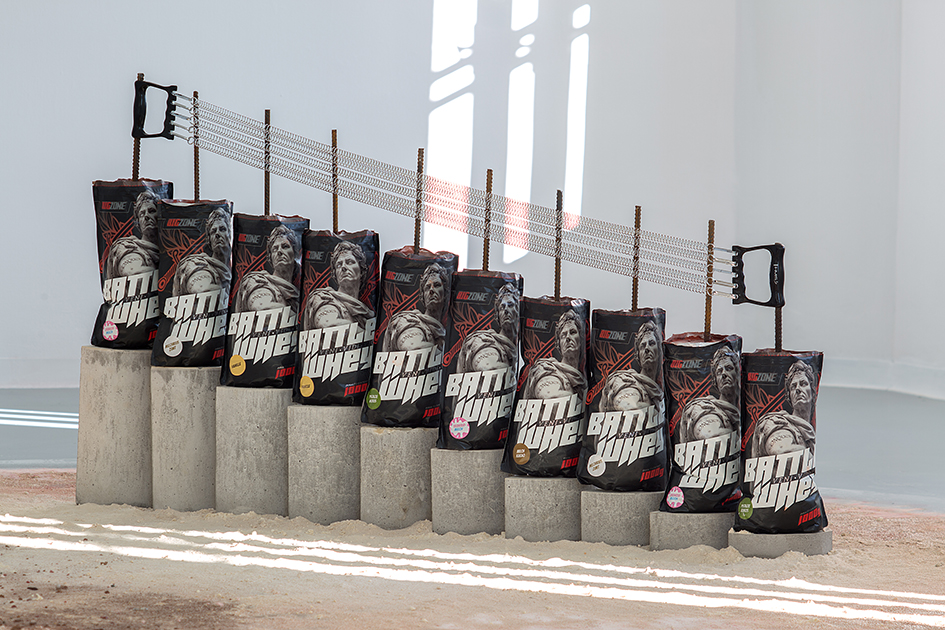 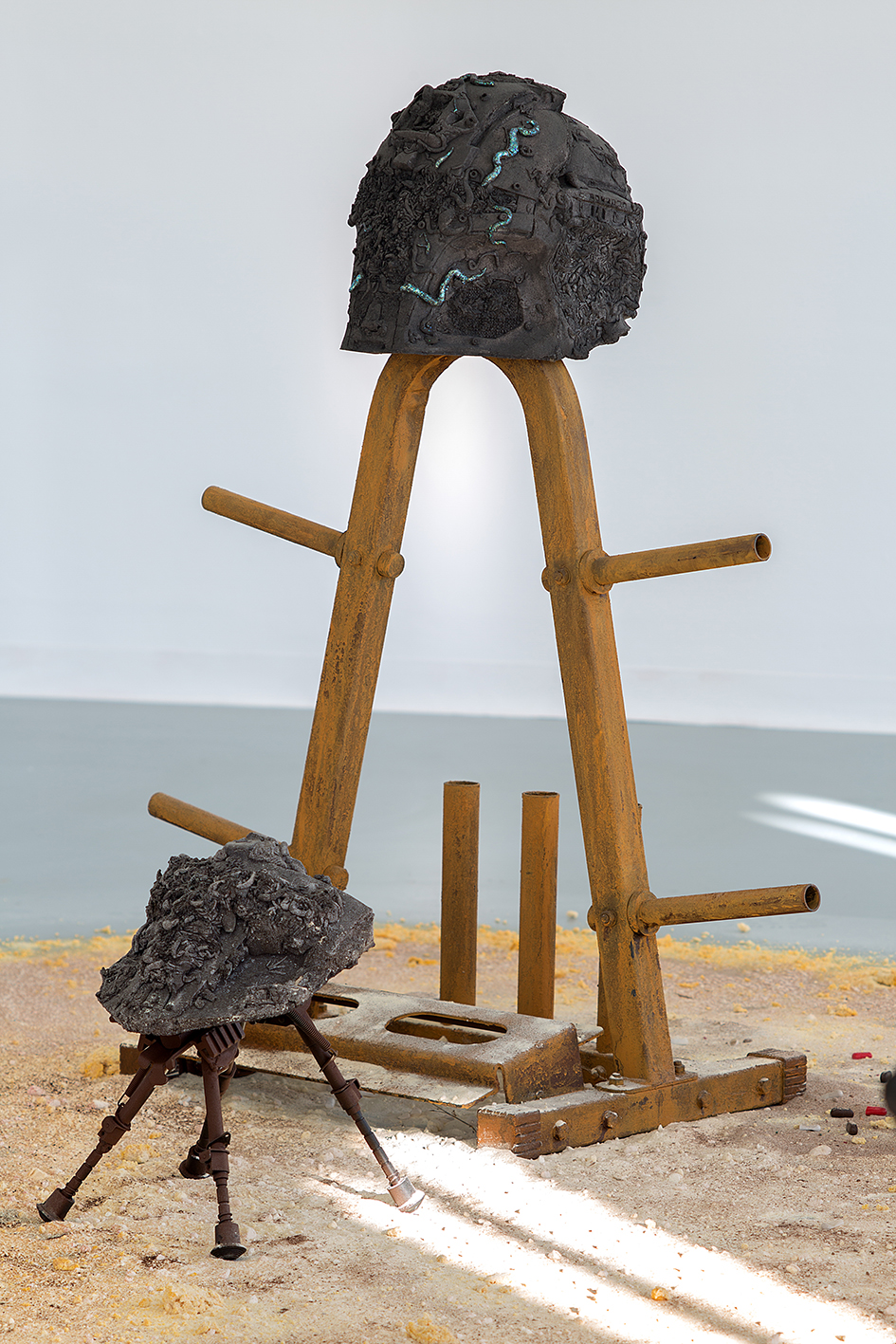 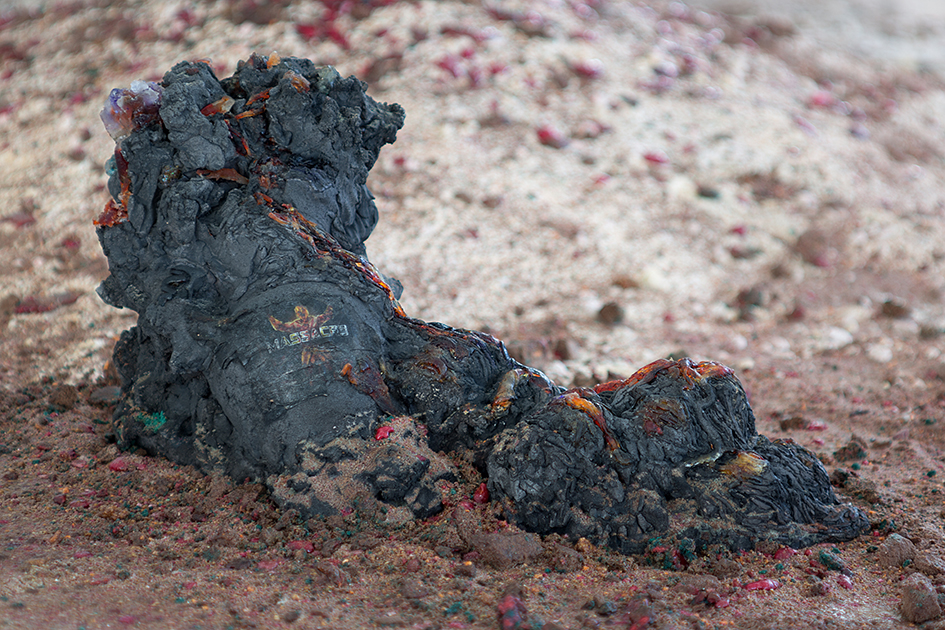 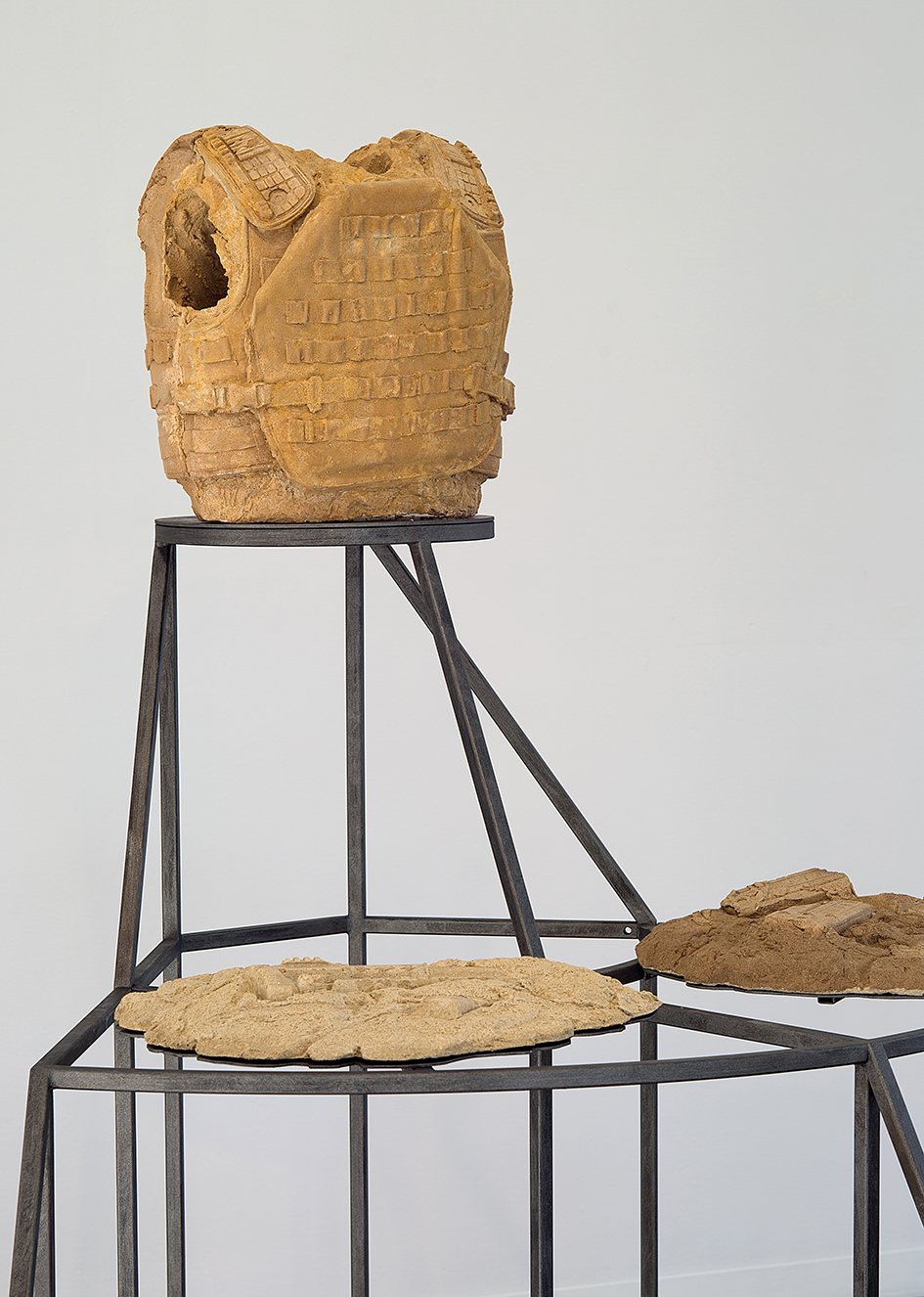 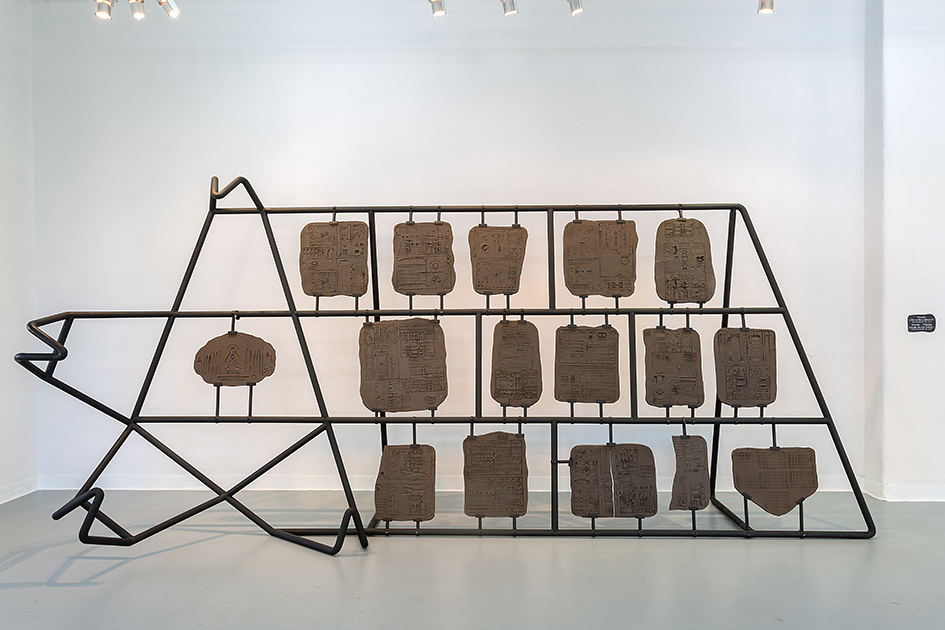 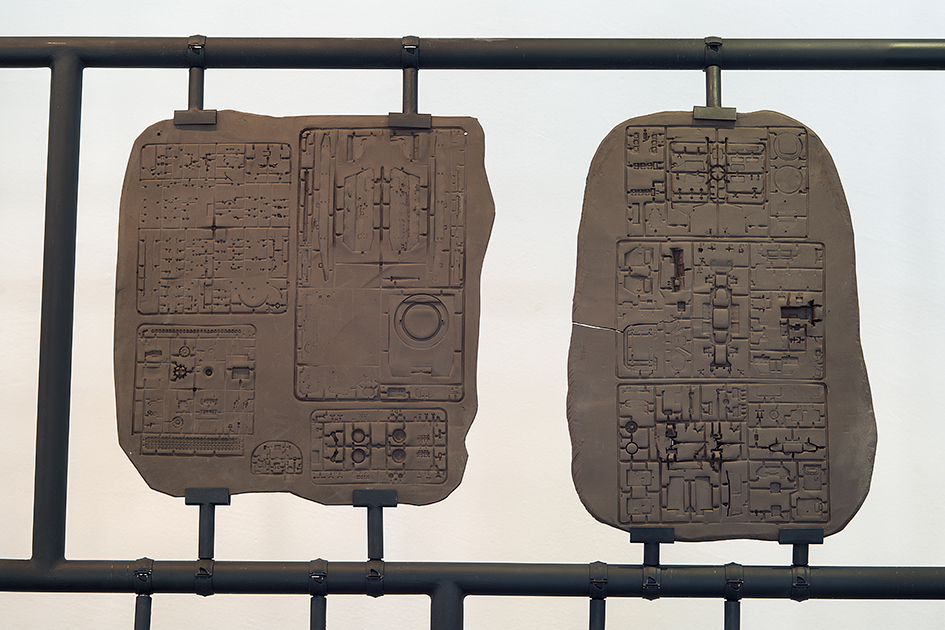 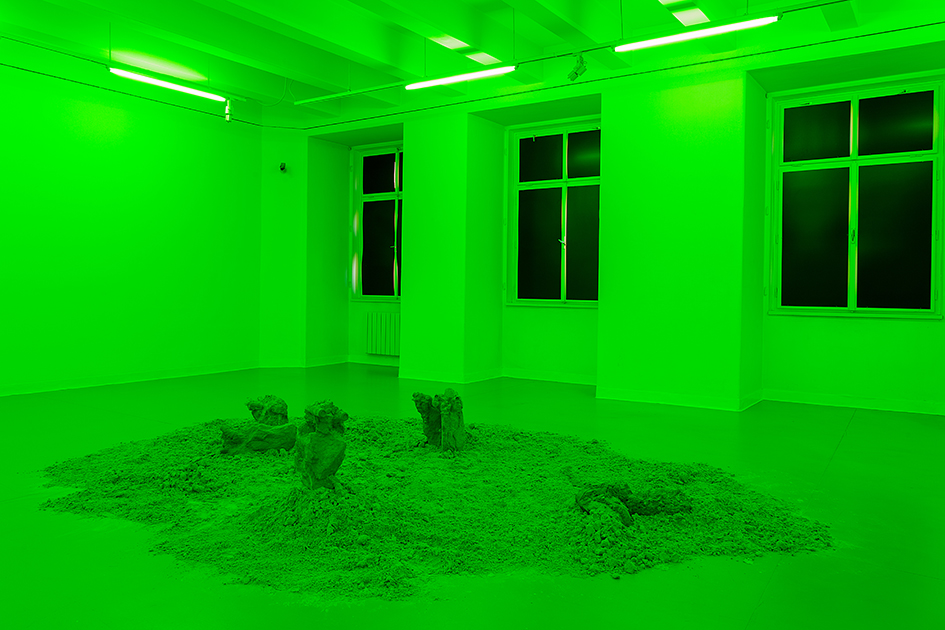 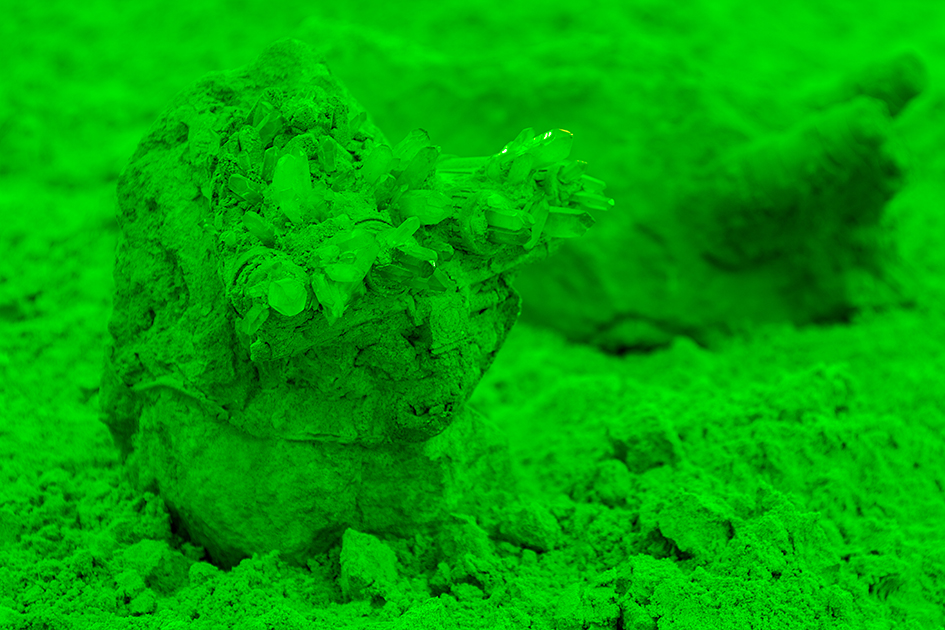 The exhibition explores questions of power and credibility through the exposure of the artefact within the privileged framework of museum practice. The focus is on uncovering, reconstructing and interpreting the traces and histories of an author's modelled reality with an indeterminate temporal anchorage. The artist's works of recent years play with the aura of archaeological fiction, using basal material solutions and traditional sculptural techniques. The freshest series of objects use the frame of reference of the so-called "(o)cult of the body", or rather the dystopia of its remains - objects of consumer fitness - culture and nutritional supplements, as a complex mixture of (artistic) materials stimulating chemical reactions in the body. In addition to the tension between objects and subjects, Čerevka reflects here on aggressive marketing strategies invoking new and old warriors from the archaic world of ancient heroes, ready to go into a new conflict at any time.
Radovan Čerevka
What impact does thinking about the rapid pace of transforming the present have on our understanding of the past and projecting the future? Is the age-old desire for power and physical dominance both the driving force behind the progress of civilization and the cause of its inevitable destruction and extinction? These and many other questions are raised by Radovan Čerevka's current exhibition in the Praetorium of the Central Slovak Gallery in Banská Bystrica. However, he does not offer unambiguous answers to them - on the contrary, it plays an associative game with the viewer through the overlapping of familiar, known and original forms. With a sense of artistic mystification, Čerevka reconstructs or re-builds the scene for dystopian future, which can be the past as well - it depends only on the perspective through which the viewer perceives his or her present.
The conceptual design of the exhibition in the storey Praetorium works with the idea of visual environments framed by individual rooms. The idea of the gallery environment is most prominently presented in the ground floor entrance of the gallery in a work entitled Optical boulders. Here the artist has created a suggestive landscape of a seemingly alien-looking geological situation, but a closer look at the objects reveals the paleontological features of fossilized militaria (specifically military night vision technology). The leitmotif of these works, and indeed of the exhibition as a whole, is thus the objectification of the human evolution of power - the transfer of its inanimate tools into the realm of anthropology.
The next floor of the gallery brings a slightly different concept of building an artistic environment. Here, unlike on the ground floor, Čerevka does not present a kind of landscape cut-out, but handles the sculptural objects with the language of a "museum" exhibition. This is particularly the case with Untitled ("Detection field"), which oscillates between a collection of trophies of dystopian conflict and an archaeological lapidary. Here too, as in Optical boulders, the instruments of military power are transformed into exoskeletons, or rather their remnants fused in a cataclysmic collision. The deliberate chronological ambiguity of the works, ranging from references to civilizational history to projections of an unsettling future, is also reflected in the solitary work N 1131 Stryker. In the same room, it is flanked by a larger-scale sculptural object entitled Zvezda ("He Who Plays Is Not Angry"). The works on this floor are unified by Čerevka's specific authorial language given by the choice of sculptural material, but also by the aforementioned allusion to museum artefacts. This particular sculptural object, on closer inspection, additionally bears the forms of a model building kit, namely that of the Russian concern Zvezda. This modelling firm is now seen as a strong promoter of Russian militarism, or even hybrid warfare, and is among the other ideological power symbols in the exhibition. Čerevka, however, again remarkably encodes these references in a language reminiscent of ancient text fields, creating timeless civilizational connections. The final work on this floor of the gallery is a sculptural-sound object entitled Community/Spoločenstvo. Again we perceive the author's handwriting given by the material structure of artificial stone, but here the art form is complemented by sound, more precisely by a documentary narrator. A male voice speaks about the behaviour of the bee community, but deliberately does not mention bees as such, and the viewer is thus unsettled by the natural comparison to the behaviour of the human community.

The last floor of Praetorium, Čerevka, like the ground floor, dedicates to the frame of reference of the author's modified anthropology. One of the two rooms is dedicated to a large sculptural installation assembled from works by Enviroment B. Here, the author again plays out a kind of scene of extinction, or rather the remains of attempts to reshape natural human bodily proportions into new titanic forms. Once again he introduces us to a disturbing world combining an antiquizing language with modern marketing products of the fitness cult(ure) sphere. He works with real nutritional supplements, which, in addition to a new artistic quality, represent a mixture of chemical reactions stimulating heroic physicality. The installation thus not only evokes the transformation of the body into some form of experimental vessel, but also acquires a new sensory quality of crystallizing "nutritional" mixtures. Similarly to the Optical boulders, where, as the author himself says - in the spirit of ethically conceived materialist concepts, the inanimate parts and instrumentalities of the former body - that is, the weapons, have their vital

properties, they also have their purposeful muscular growth. For from the perspective of materialism, it is a set of provoked chemical reactions amidst an extraordinarily complex mixture of living and non-living substances. In the adjacent floor space, these works are followed by an ideologically related set of objects called Pillars of heroes. Jars of protein and various powdered fitness stimulants form bizarre totems celebrating the posthuman body and, with inscriptions such as combat or predator, its fighting abilities. The columns are categorized by the expressive names and slogans of the product strategy of today's bodybuilding, reinforcing their subversive charge.

Radovan Čerevka's exhibition Detection Field brings together, from my point of view, a compact set of a fusion of his freshest work and works from the last few years. The artist's emphasis on basic material solutions and traditional sculptural techniques combined with current artistic language place his work within the specific framework of our art scene. With his work, he also demonstrates an example of the unusual vitality of the sculptural medium and thus sets a mirror to the theses about its weakening in the Slovak environment.