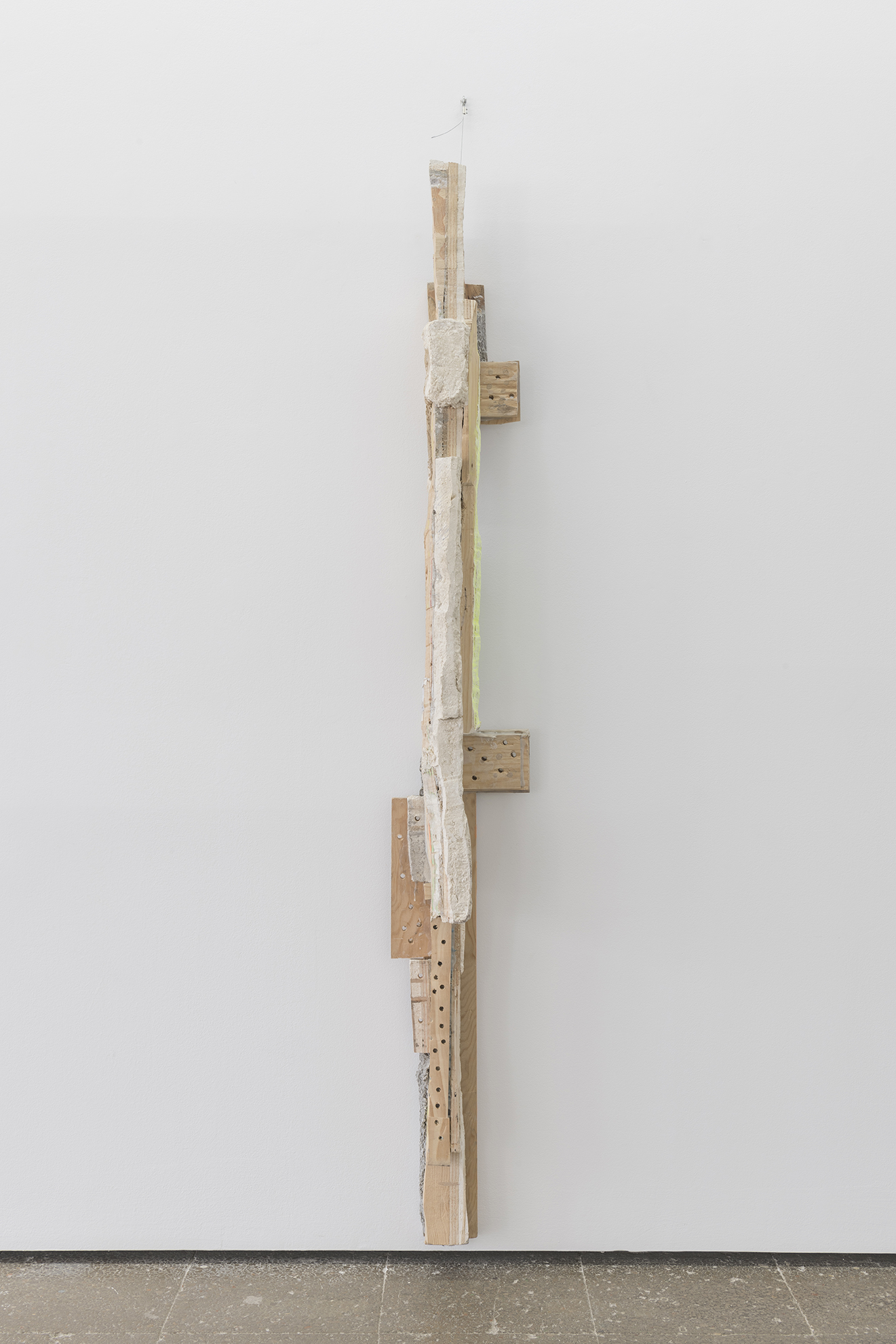 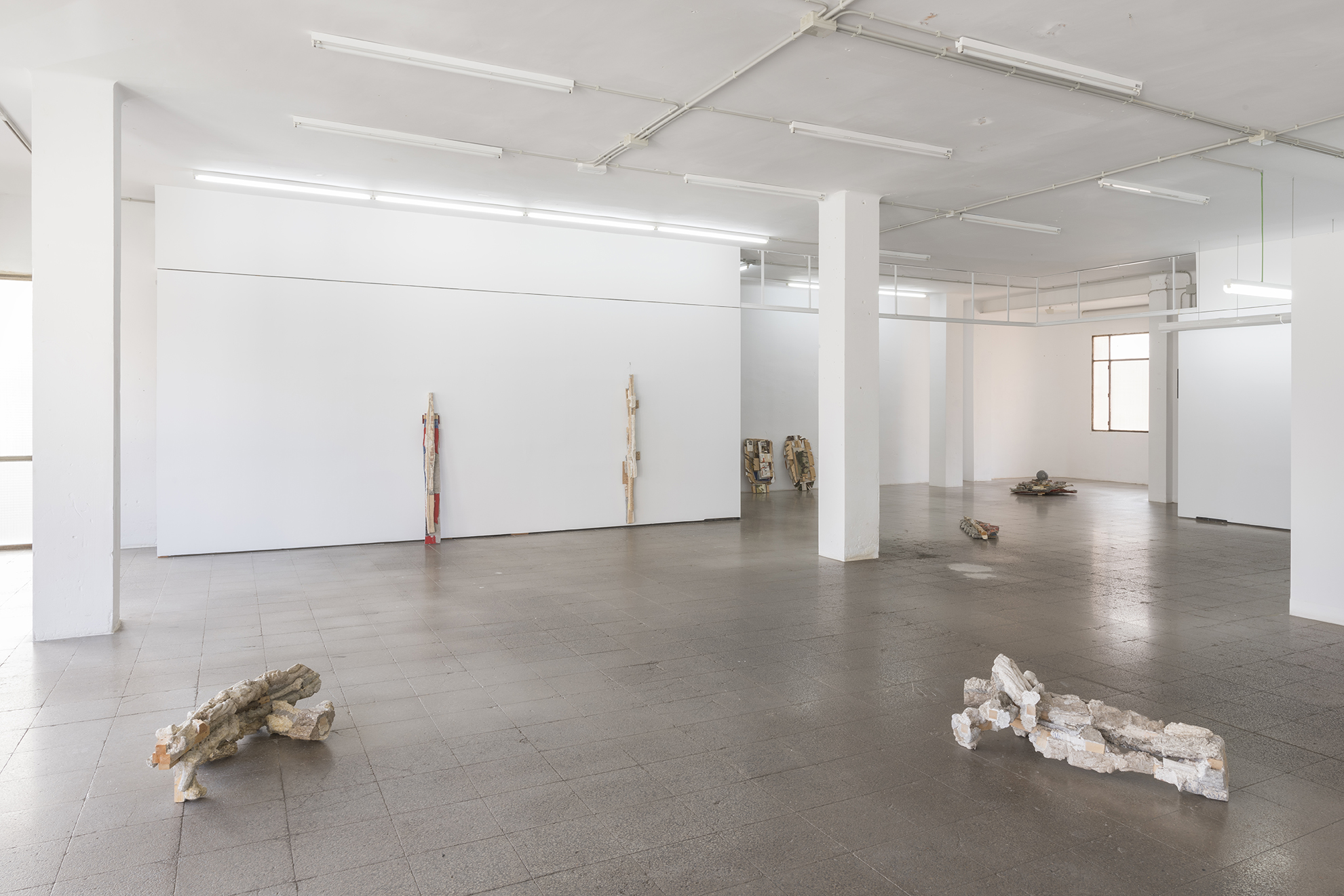 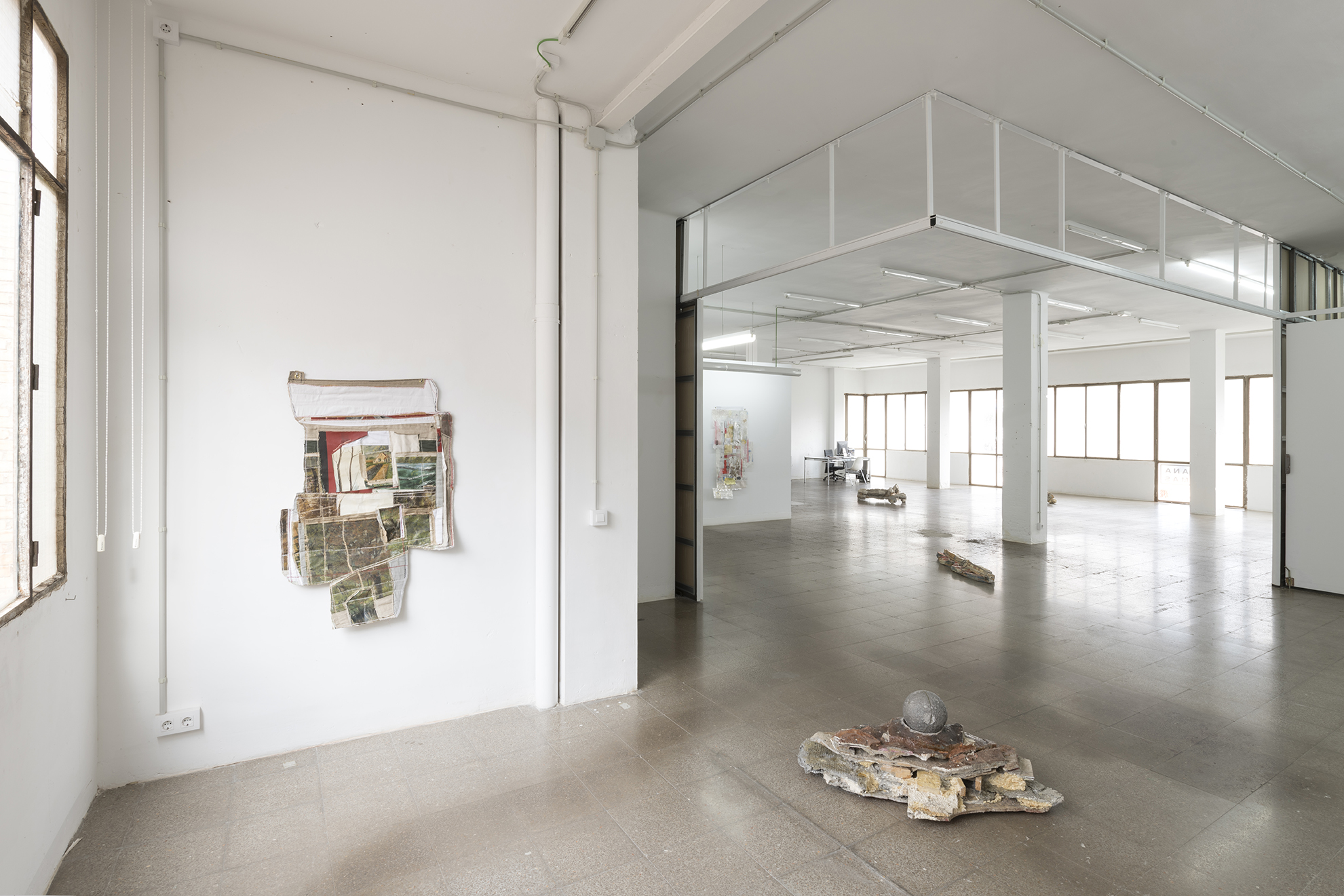 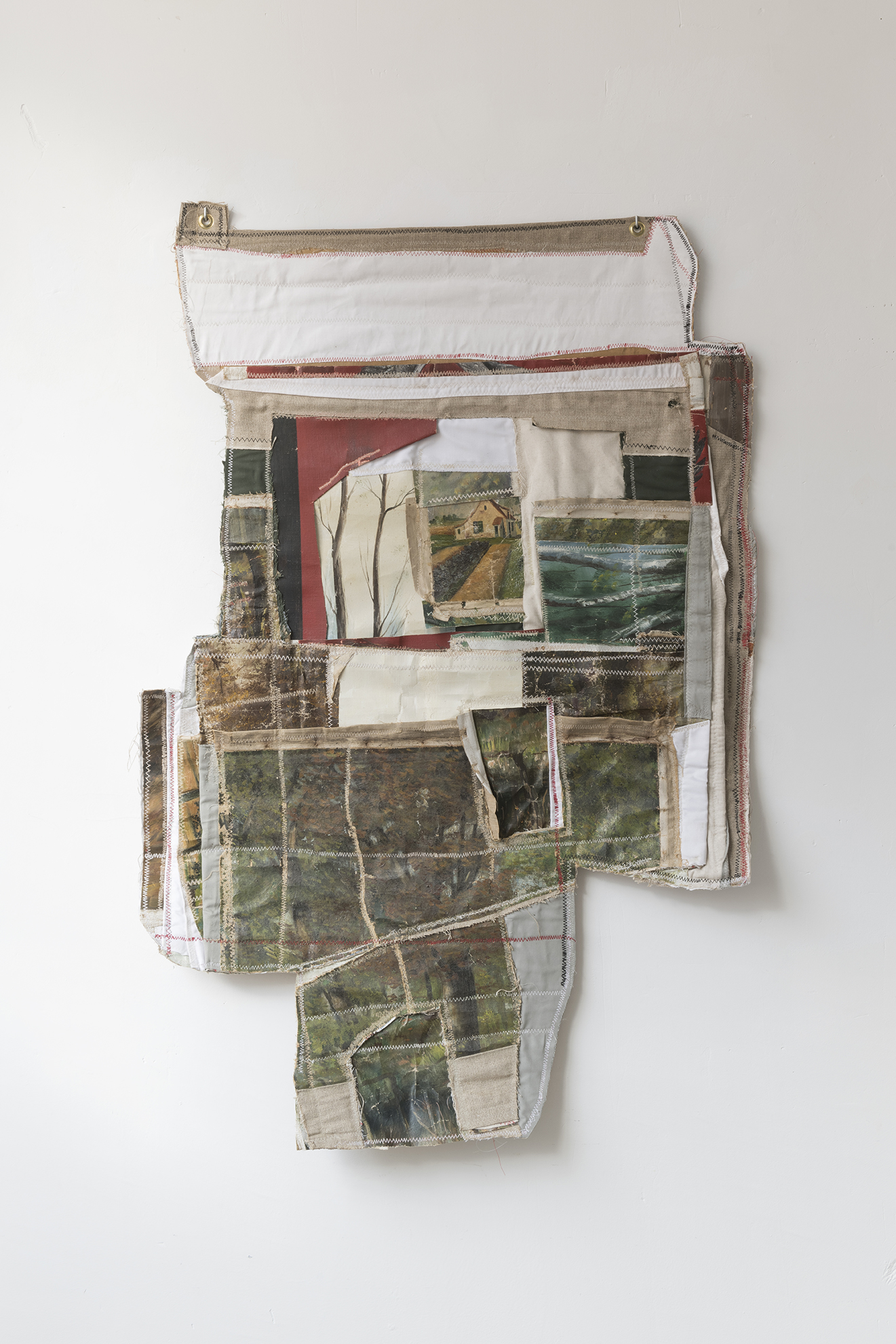 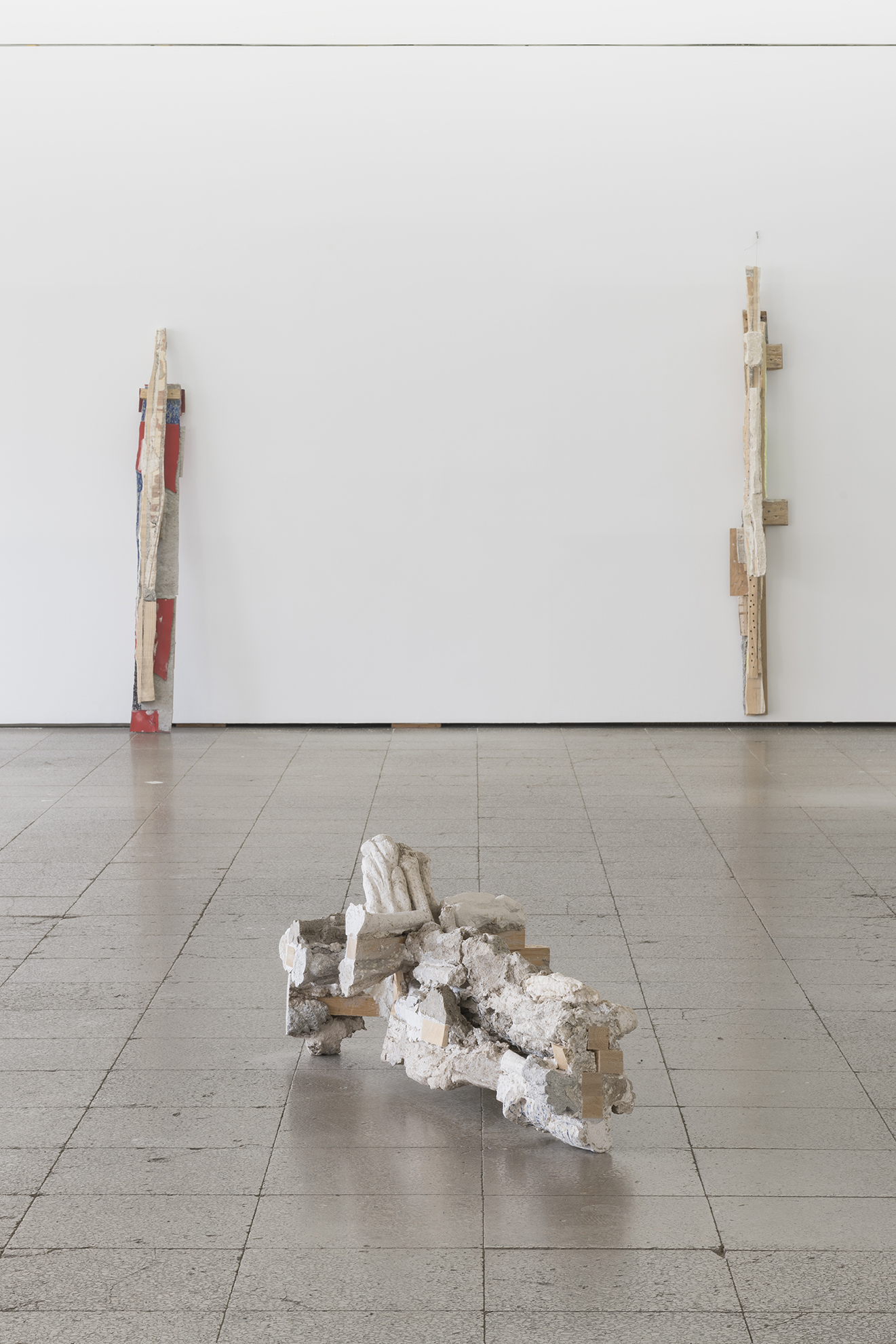 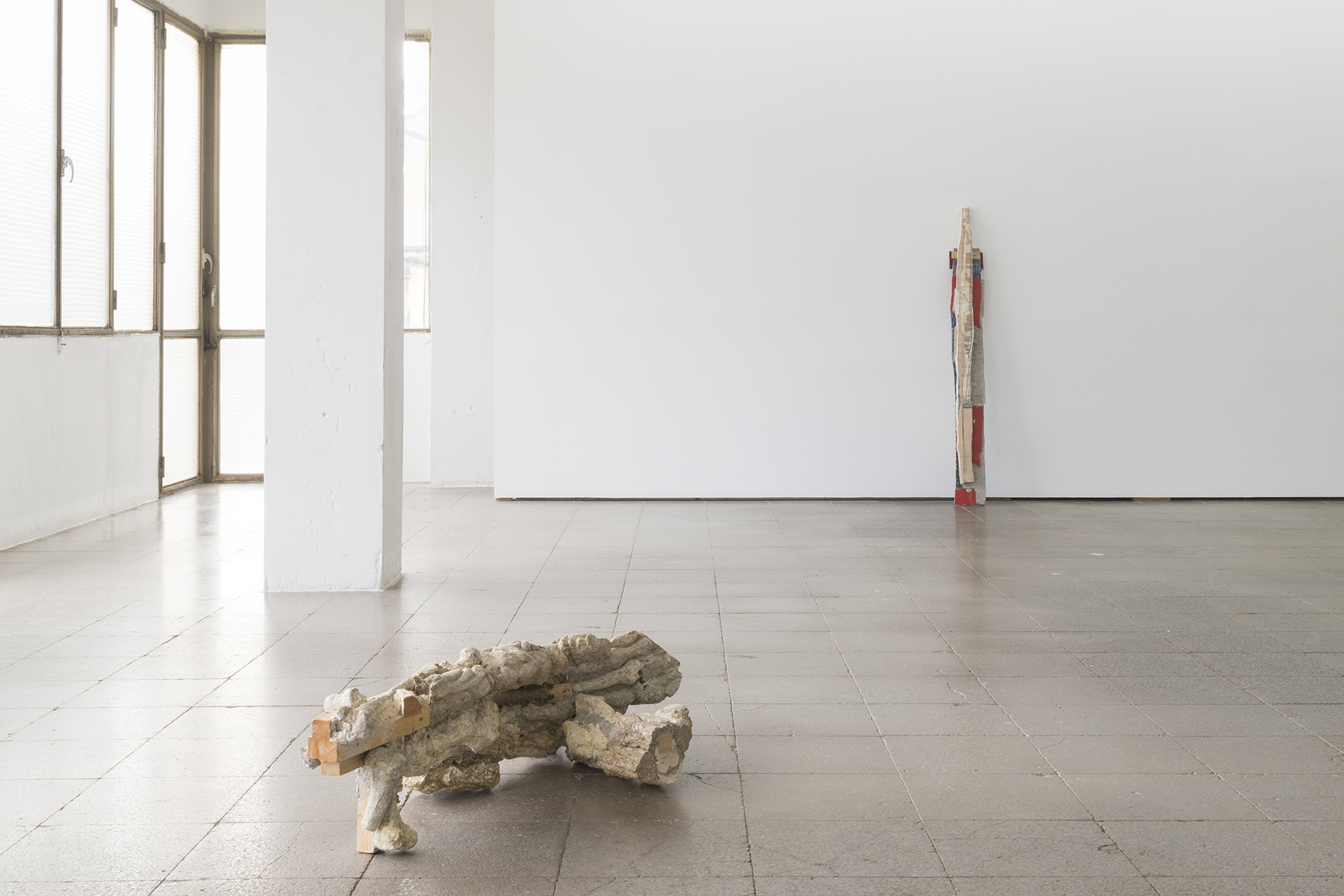 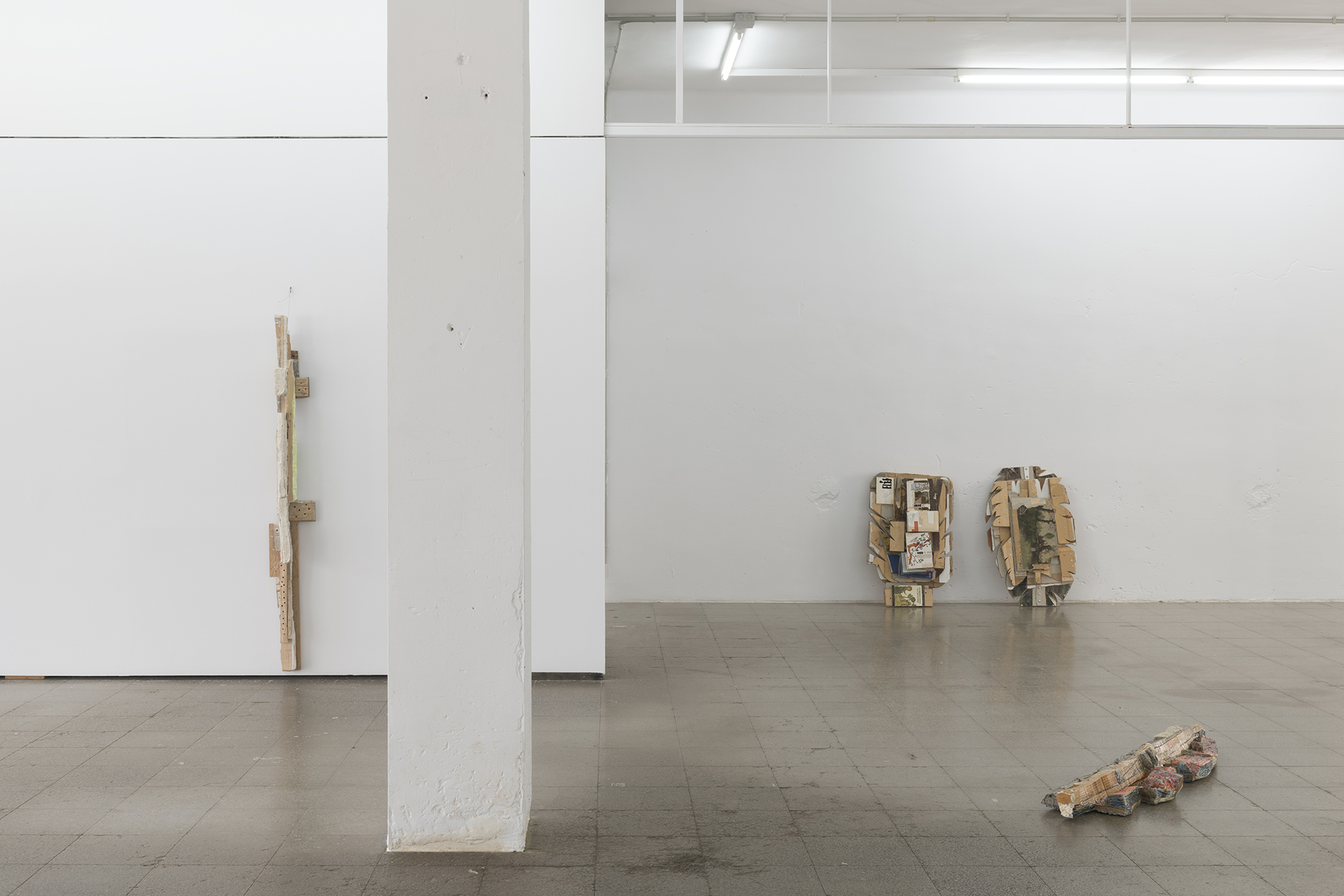 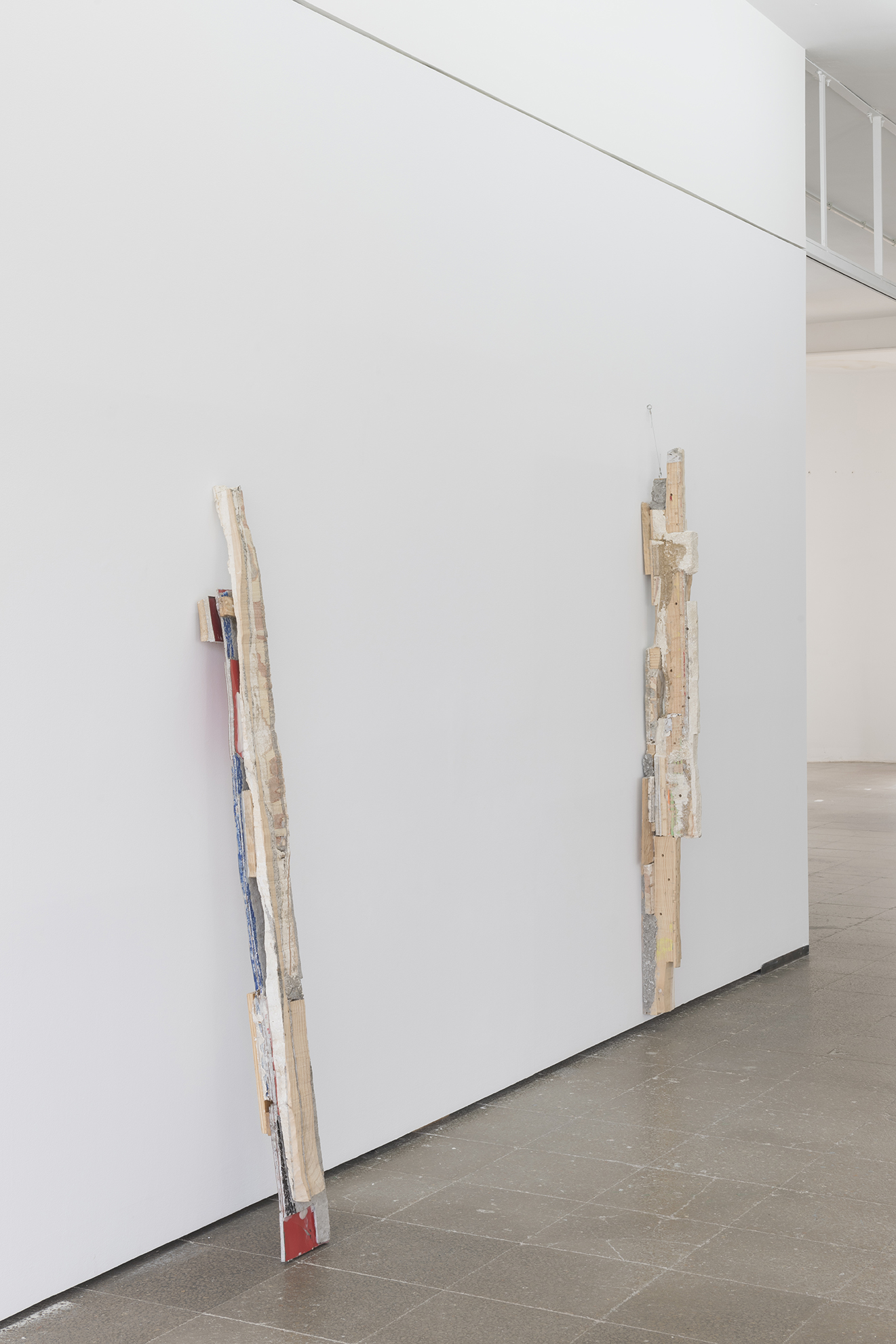 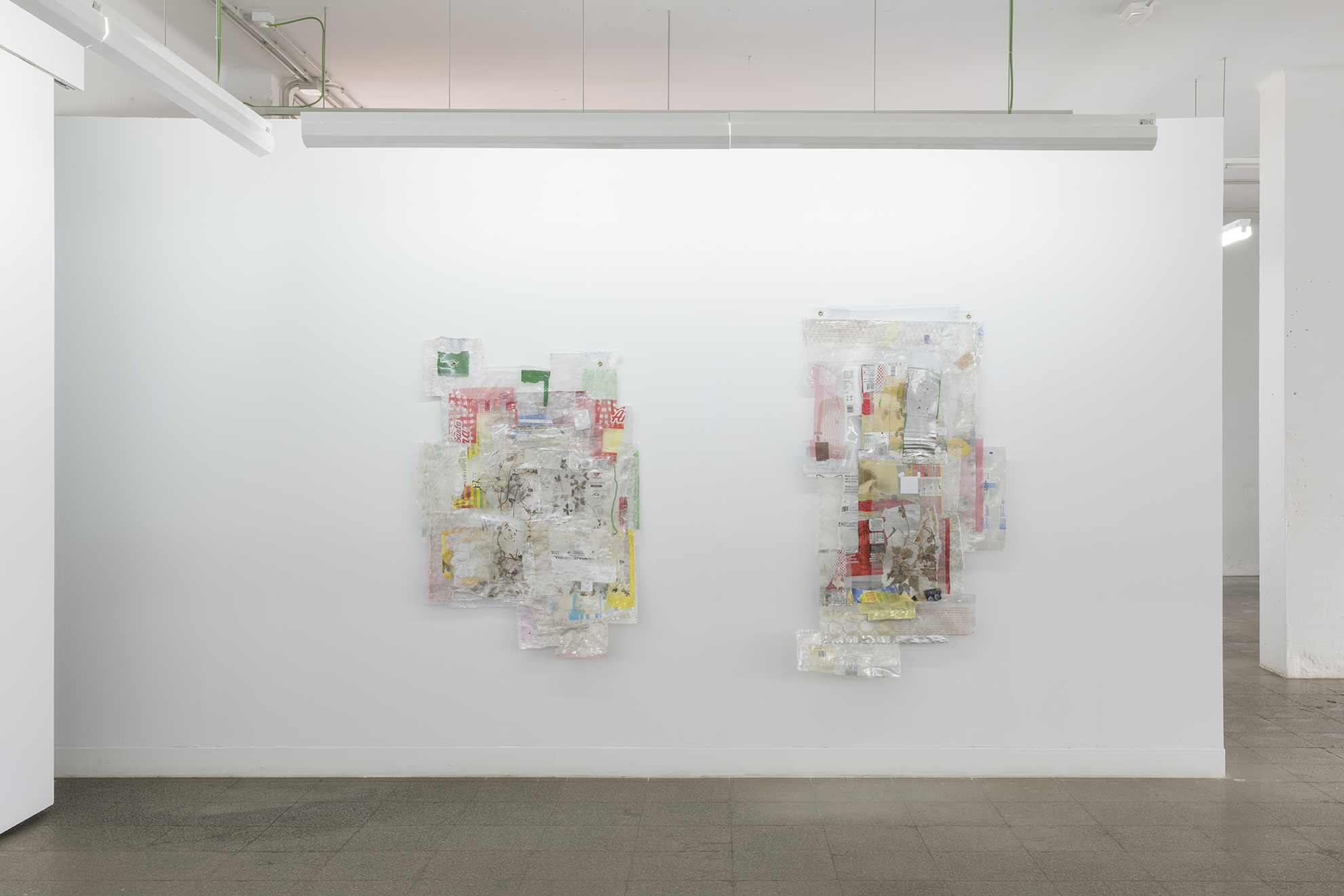 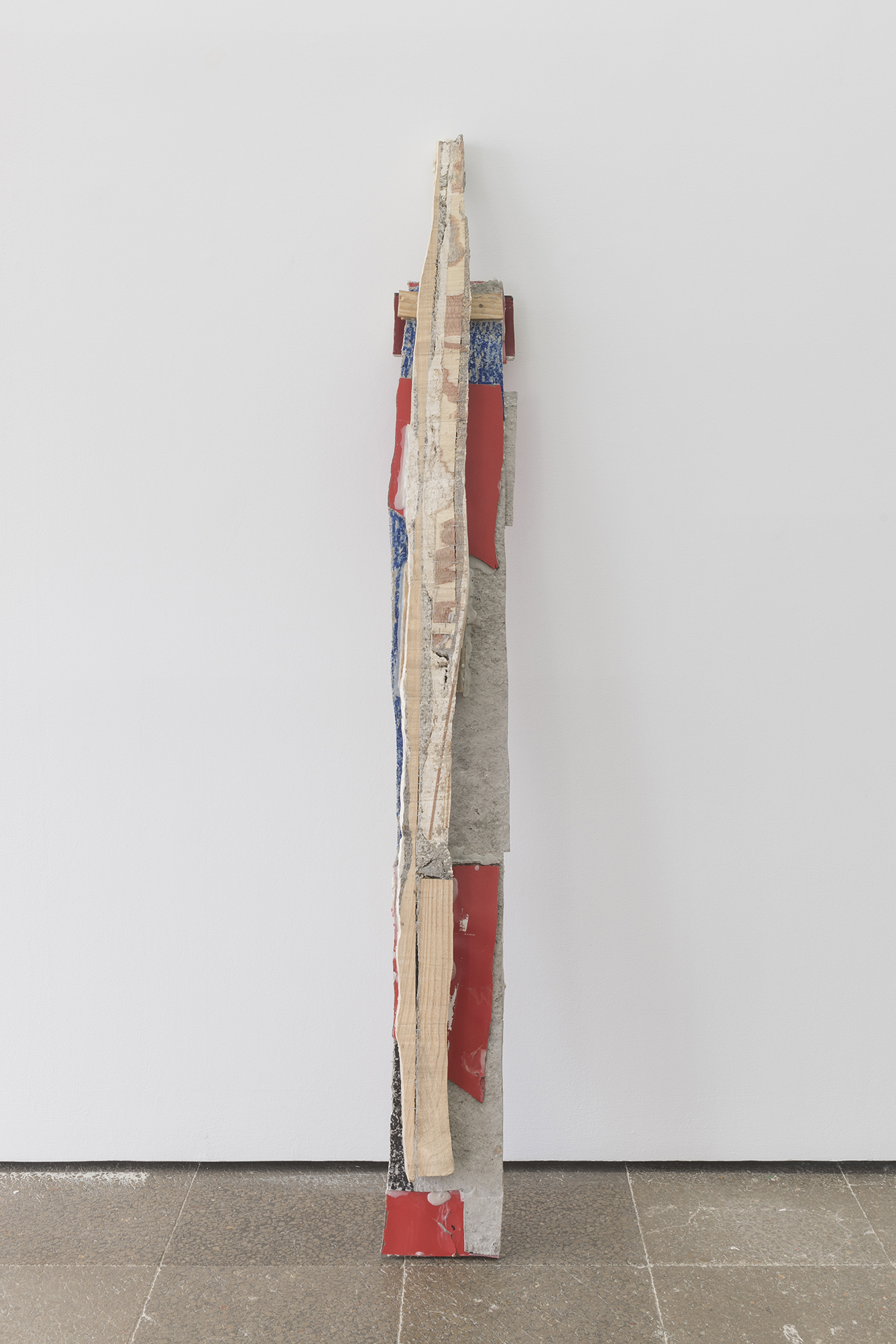 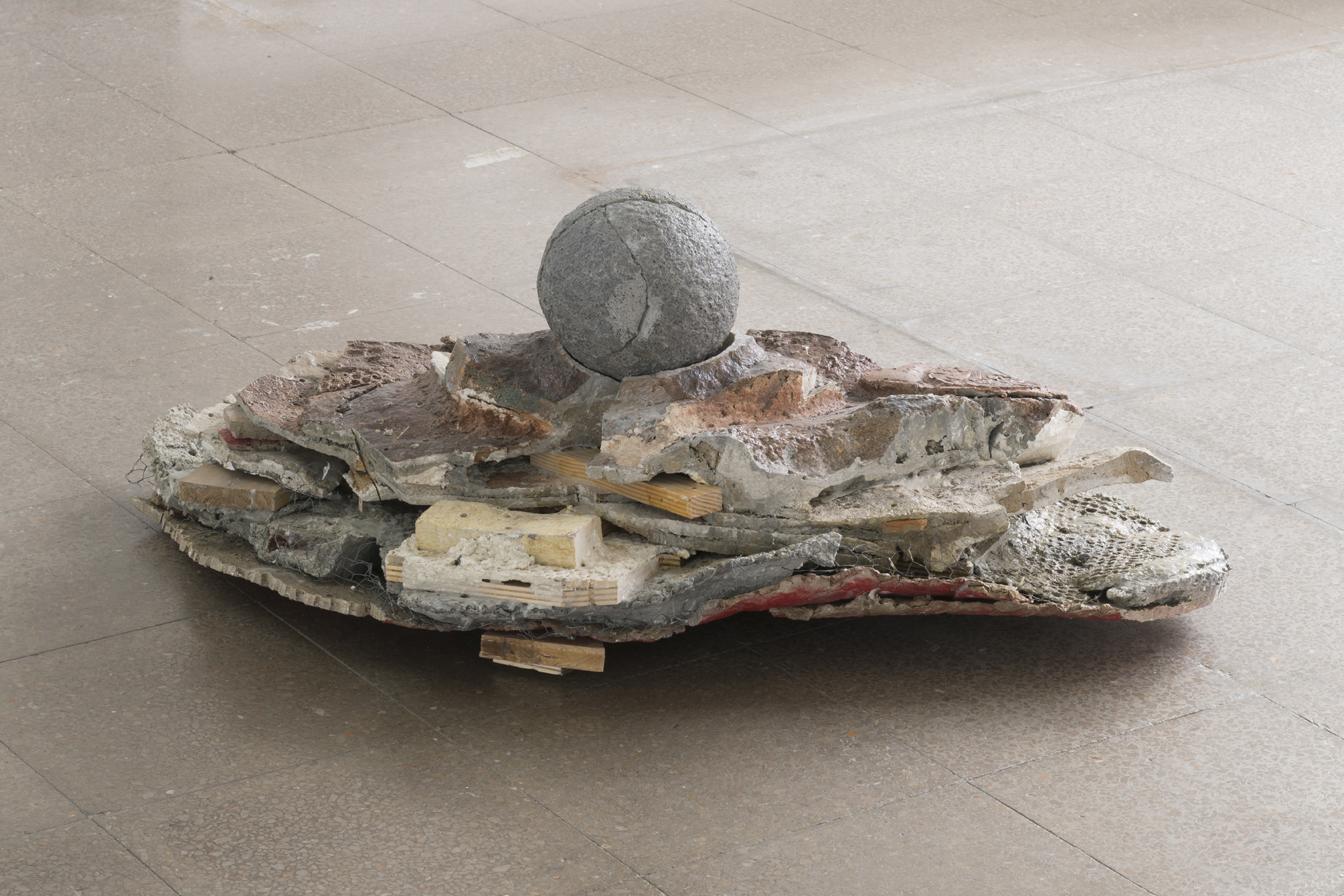 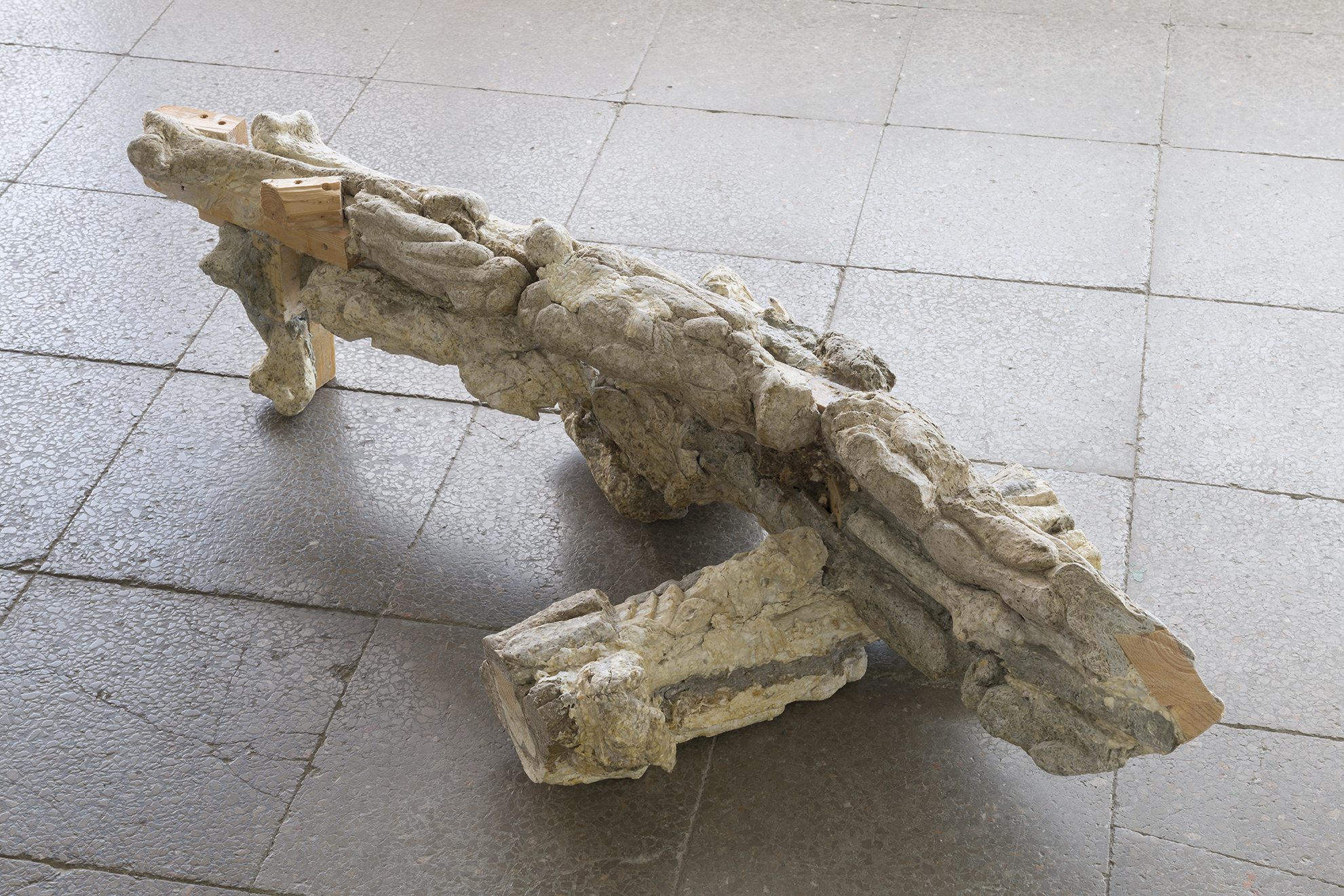 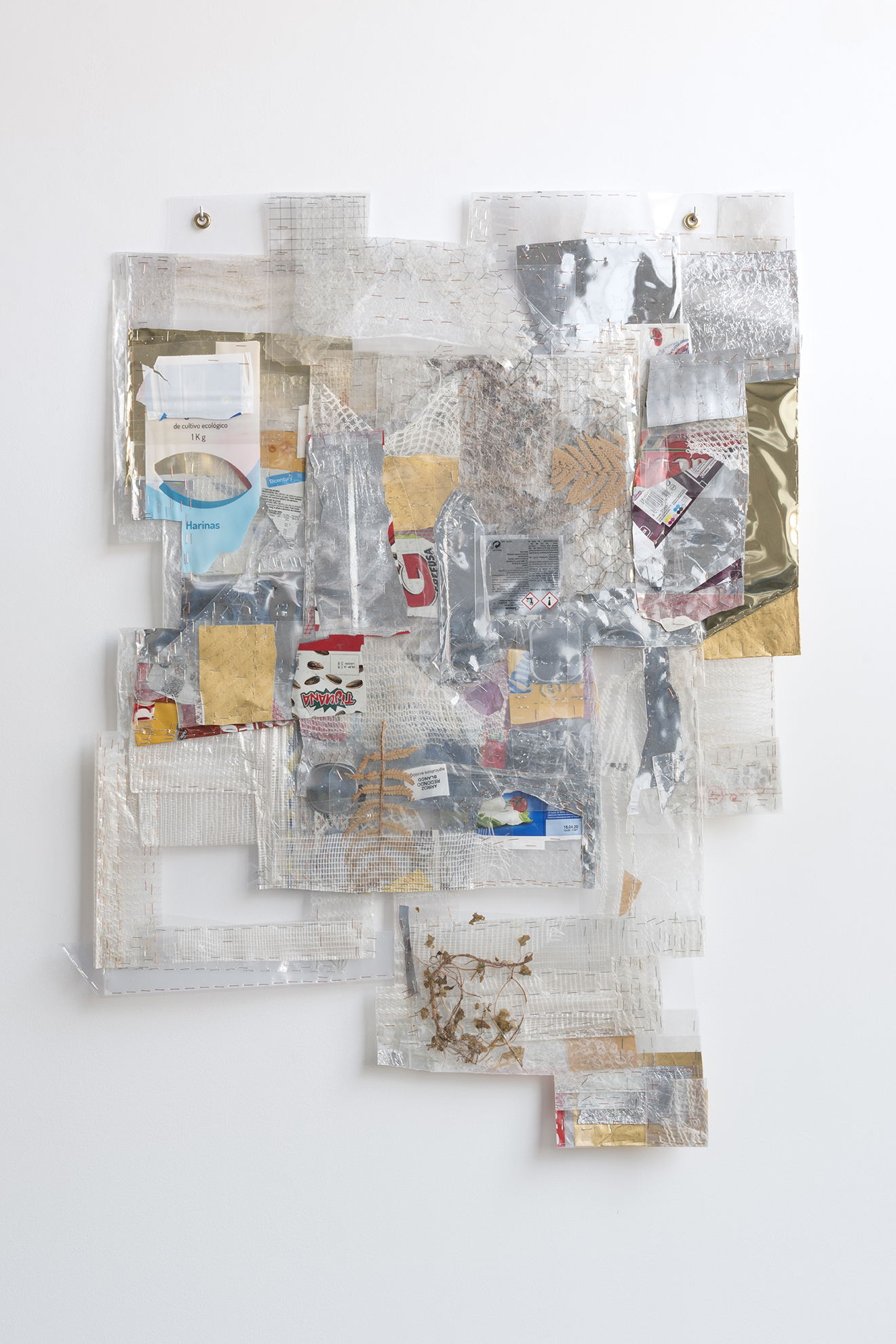 Ana Mas Projects is pleased to present “Nervio y Limbo”, a solo exhibition by Oier Iruretagoiena that sets up a dialogue between sculptures and collages produced by the artist between 2018 and 2021.
The sculpture Nervio y limbo (2021), the most recent and the one that gives title to the exhibition, resembles the shape of a long leaf, with a central rib and a pointed outline. In a natural and not too premeditated way, the motif of the leaf is an element that has gained special prominence in many of the works that are now gathered in the gallery. This is the case of Sin título (2020), formed by two assemblages leaning against the wall. Among the various materials that form part of it, we find books on ecology and possible natural disasters, and a painting of a rural landscape. They reflect an interest in how we currently imagine the future —generally, a dystopian world—, while at the same time the pre-industrial is romanticised.
That same interest can also be sensed in the works that hang on the walls. Paisaje sin mundo III (2019) is a collage made by sewing pieces of paintings of rural landscapes, and the plastic collages draw attention to two of the most common elements that we find in the neglected areas on the outskirts of the cities: “bad” weeds, such as nettles and brambles, and consumer product packaging. They are encapsulated between overlapping plastic layers, in a formal exercise that also draws attention to the kind of landscape that consumer society leaves behind.
Although far from plant reminiscences, other works are also related to Nervio y Limbo, due to their similar material composition and way of working: Sin título (2018), Bird & Bone I (2018), Bird & Bone II (2018), San Sebastián (veinticuatro) (2021) and San Sebastián (treinta y siete) (2021). All of them are made from an assemblage of wooden parts and papier maché, to later make the sculpture and the internal stratification visible through strong cuts.
Although the works were originally produced for independent contexts, they converse together in the space of Ana Mas Projects, tracing the evolutionary line of the artist’s work over the last four years, evidencing aesthetic and conceptual correspondences.
Oier Iruretagoiena (Errenteria, Gipuzkoa, 1988) started his career in experimental music, and has later been opening up to other formats such as sculpture and text. He graduated in Fine Arts at the EHU-UPV in 2011, including an exchange period with the University of Barcelona, and in 2018 he completed his training with the WIELS residency programme in Brussels. He has exhibited individually in the San Telmo museum in Donostia- San Sebastián (2021), in the Carreras Múgica gallery in Bilbao (2019 and 2015), and in the Halfhouse space in Barcelona (2014), among others. He has also recently participated in the following group exhibitions: “El sentido de la escultura” in the Fundació Joan Miró (Barcelona, 2021), “Generación 2020”; in La Casa Encendida (Madrid, 2020), “Le Petit Cercle Bruxellois” in the Institut de Carton (Brussels, 2019), “Bi Dos Two” in Azkuna Zentroa (Bilbao, 2018), “Cale, cale, cale! Caale!!!” in Tabakalera (Donostia-San Sebastián, 2017) curated by Juan Canela, and “Otzan” in the gallery Elba Benítez (Madrid, 2016).