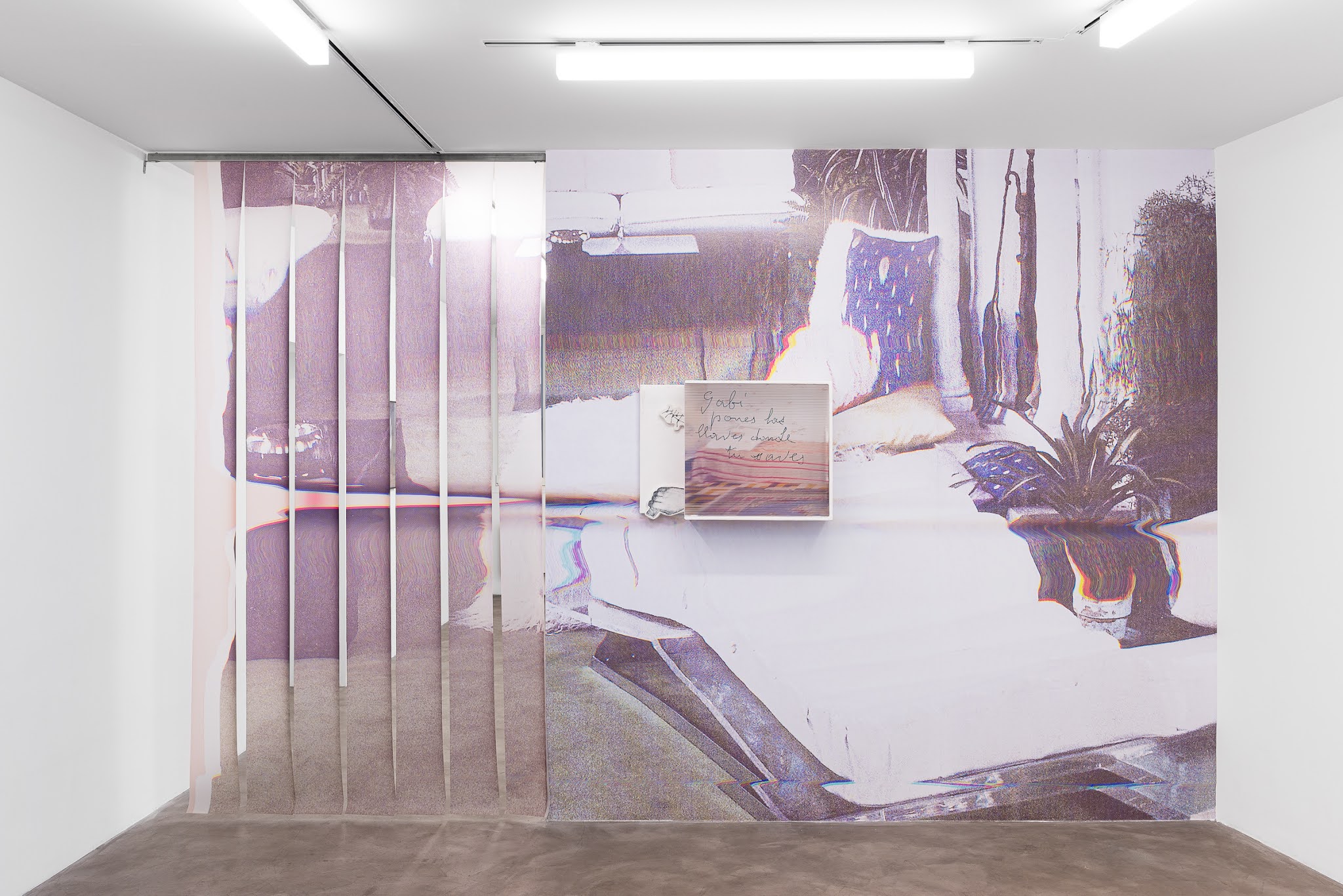 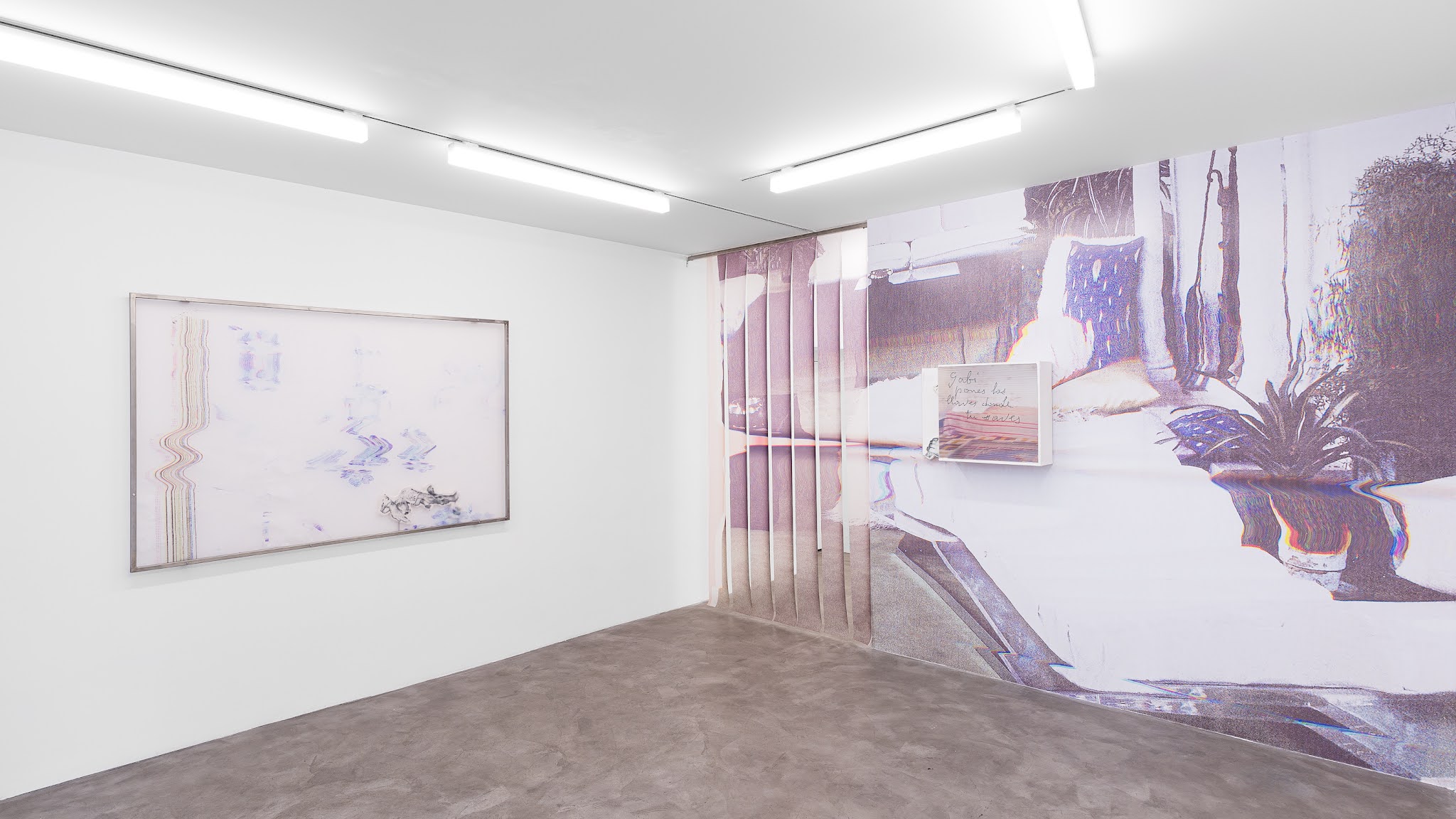 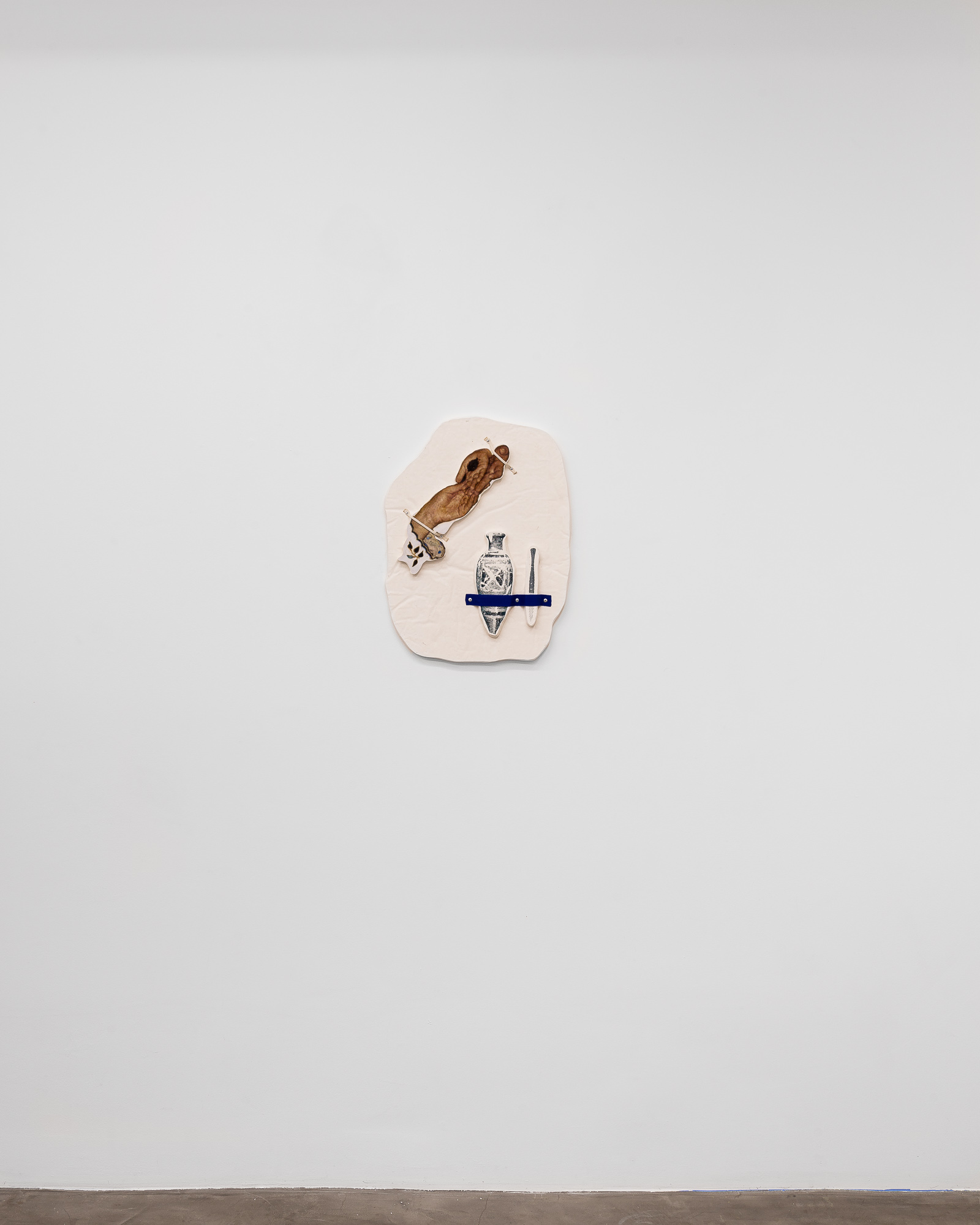 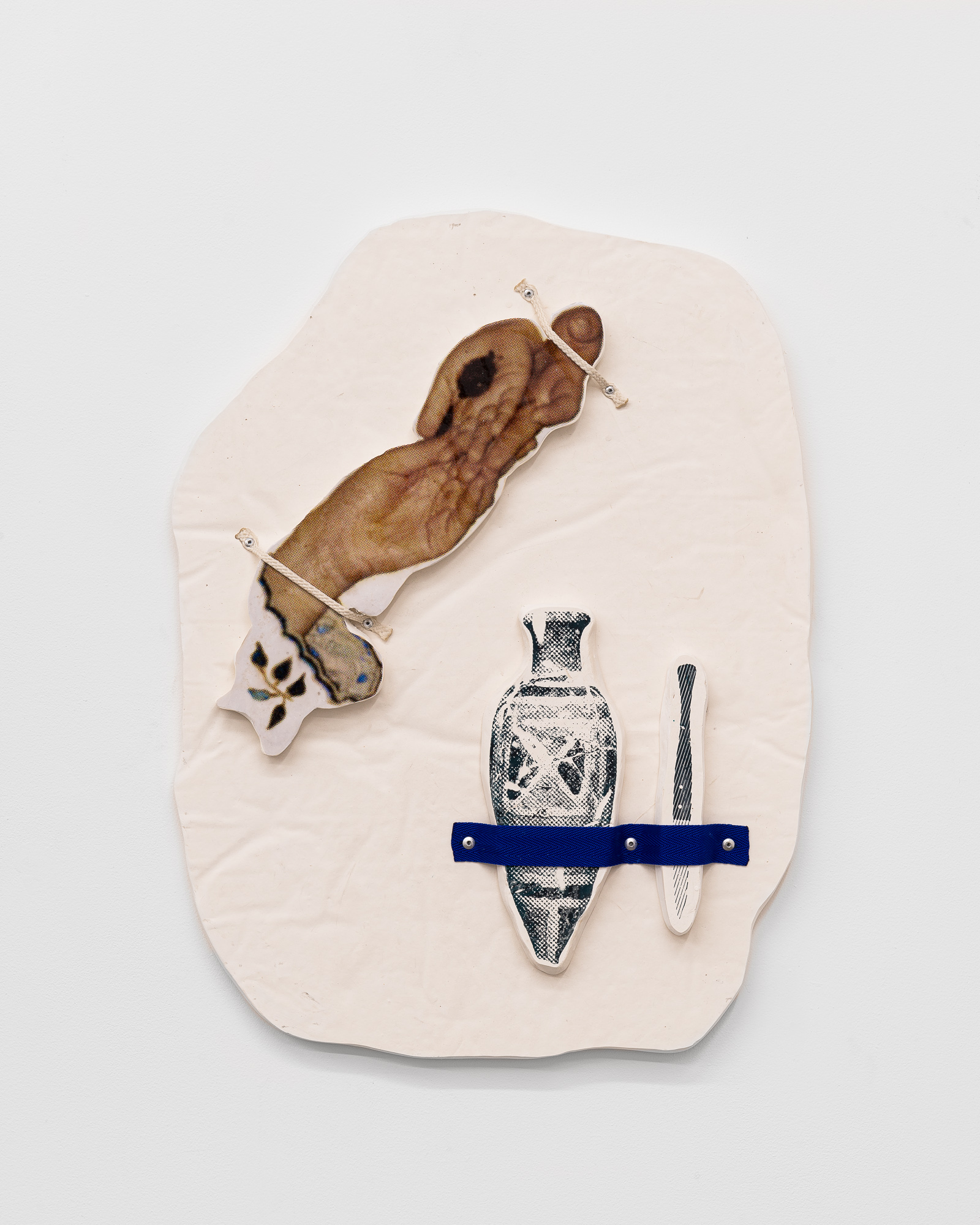 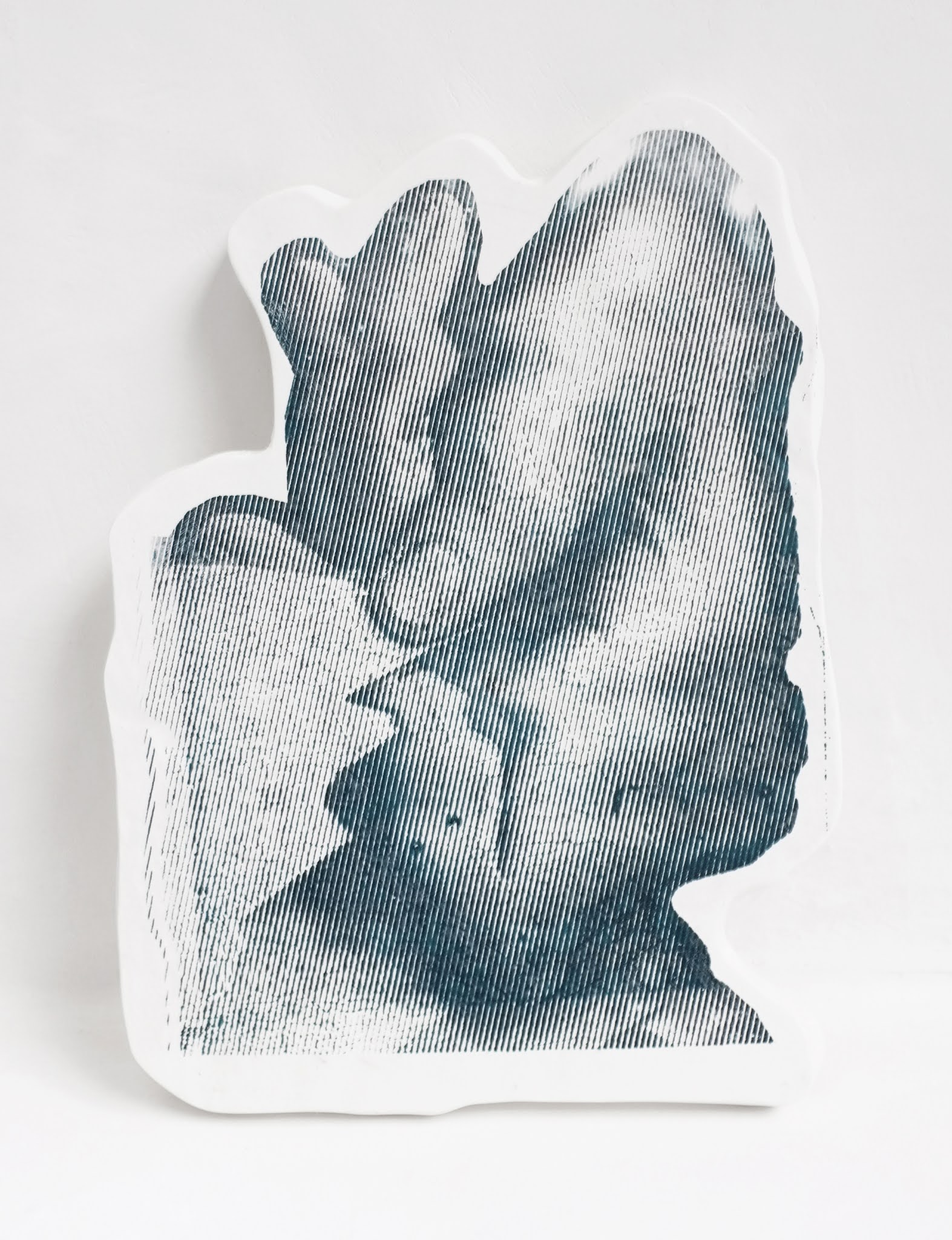 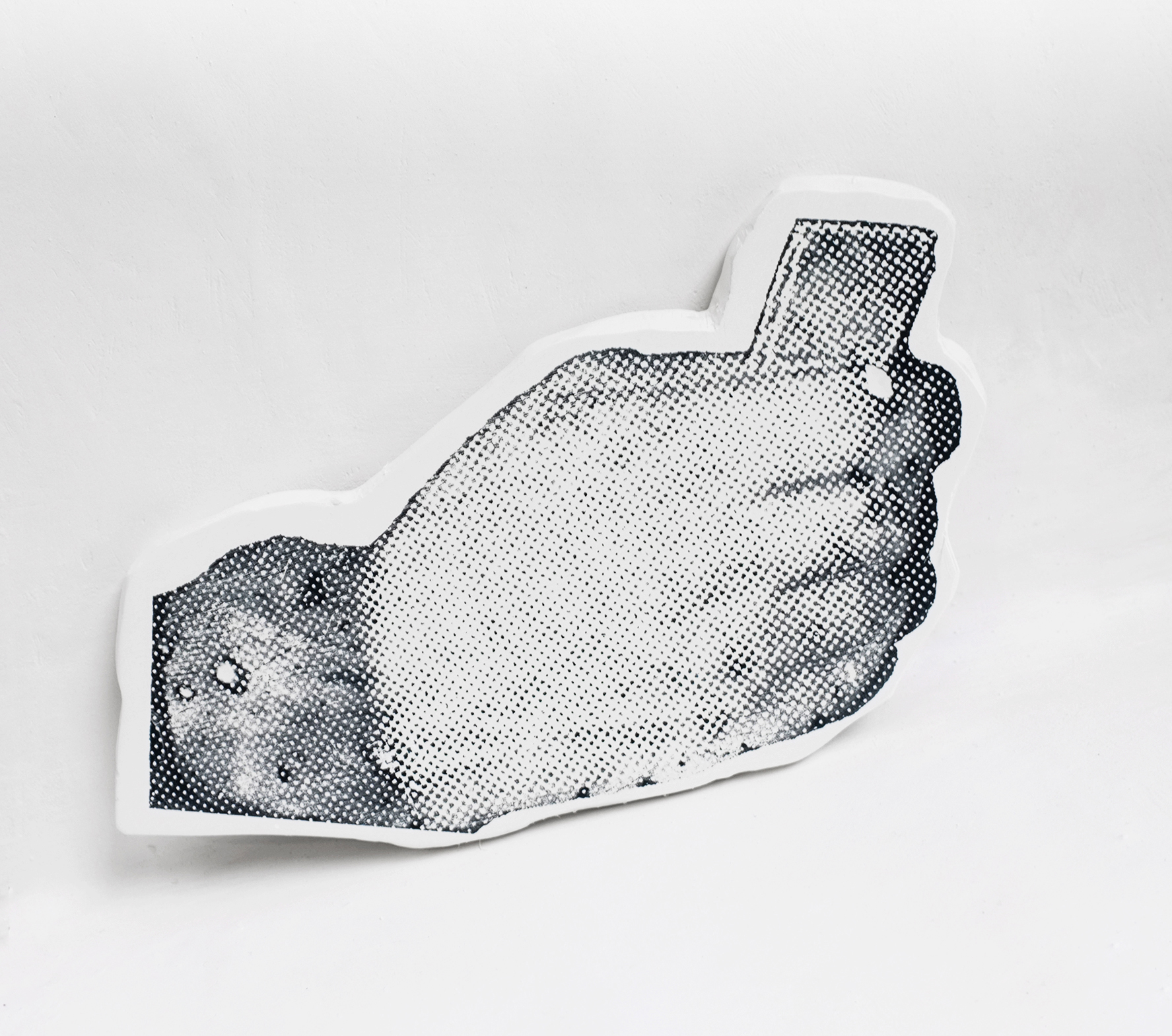 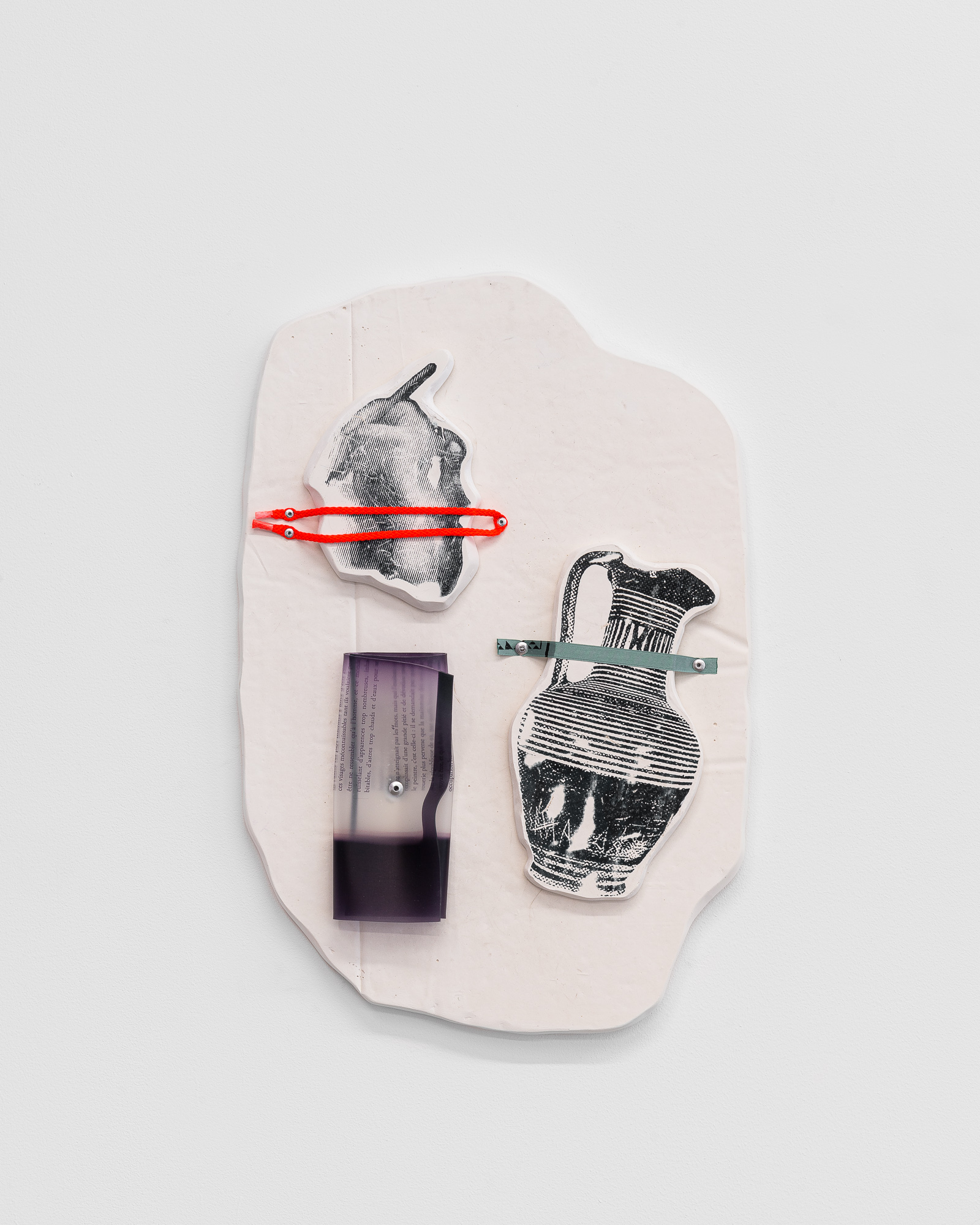 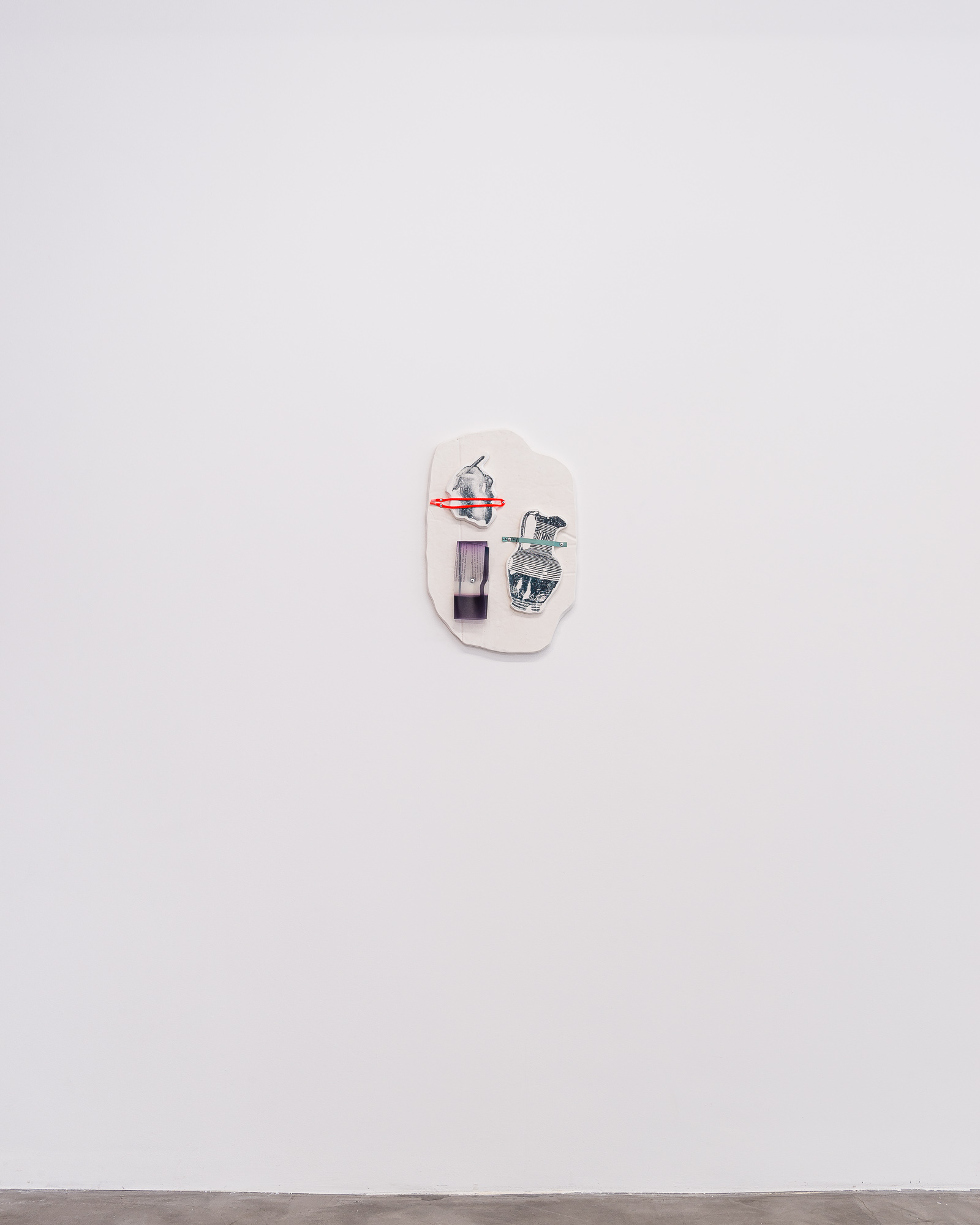 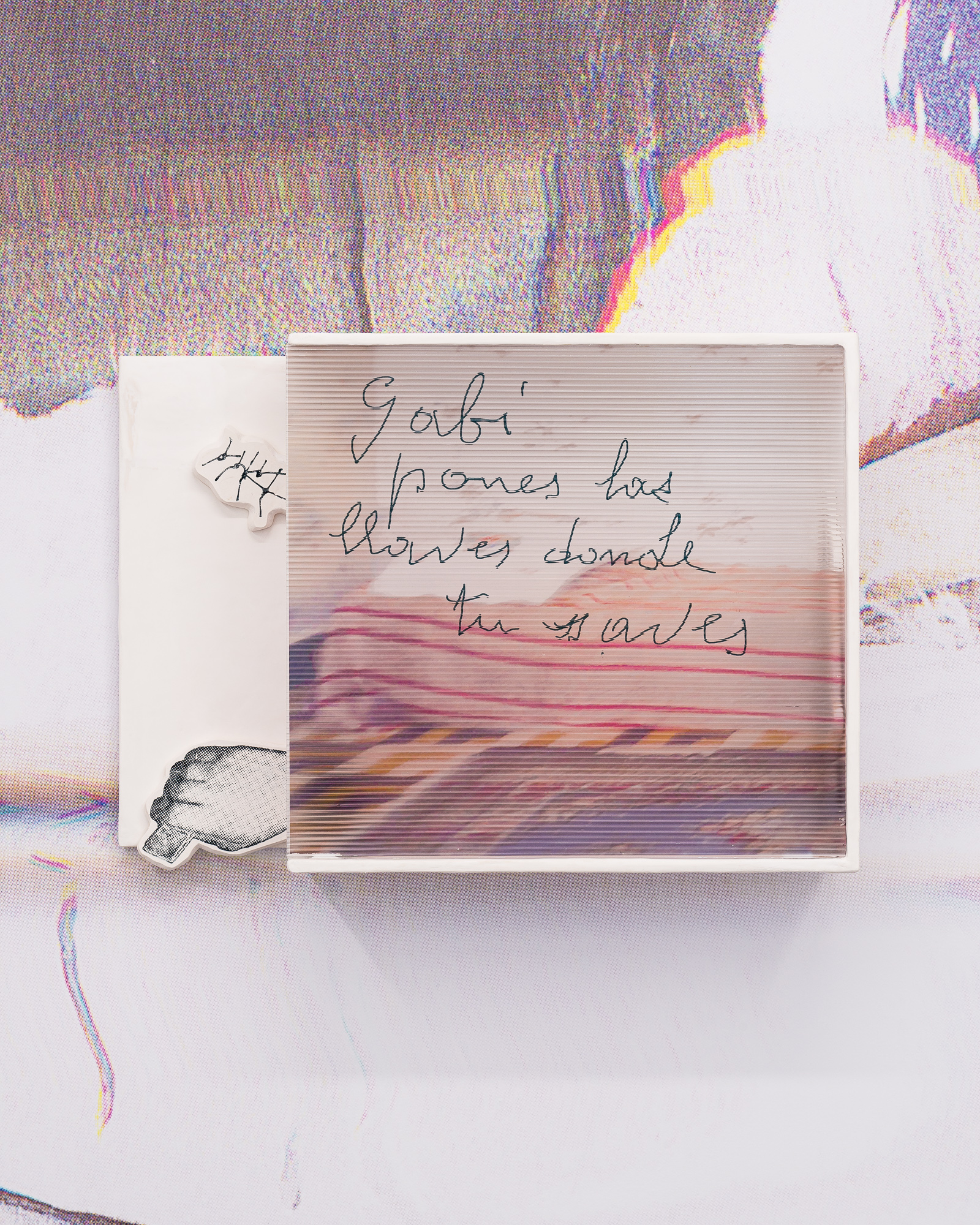 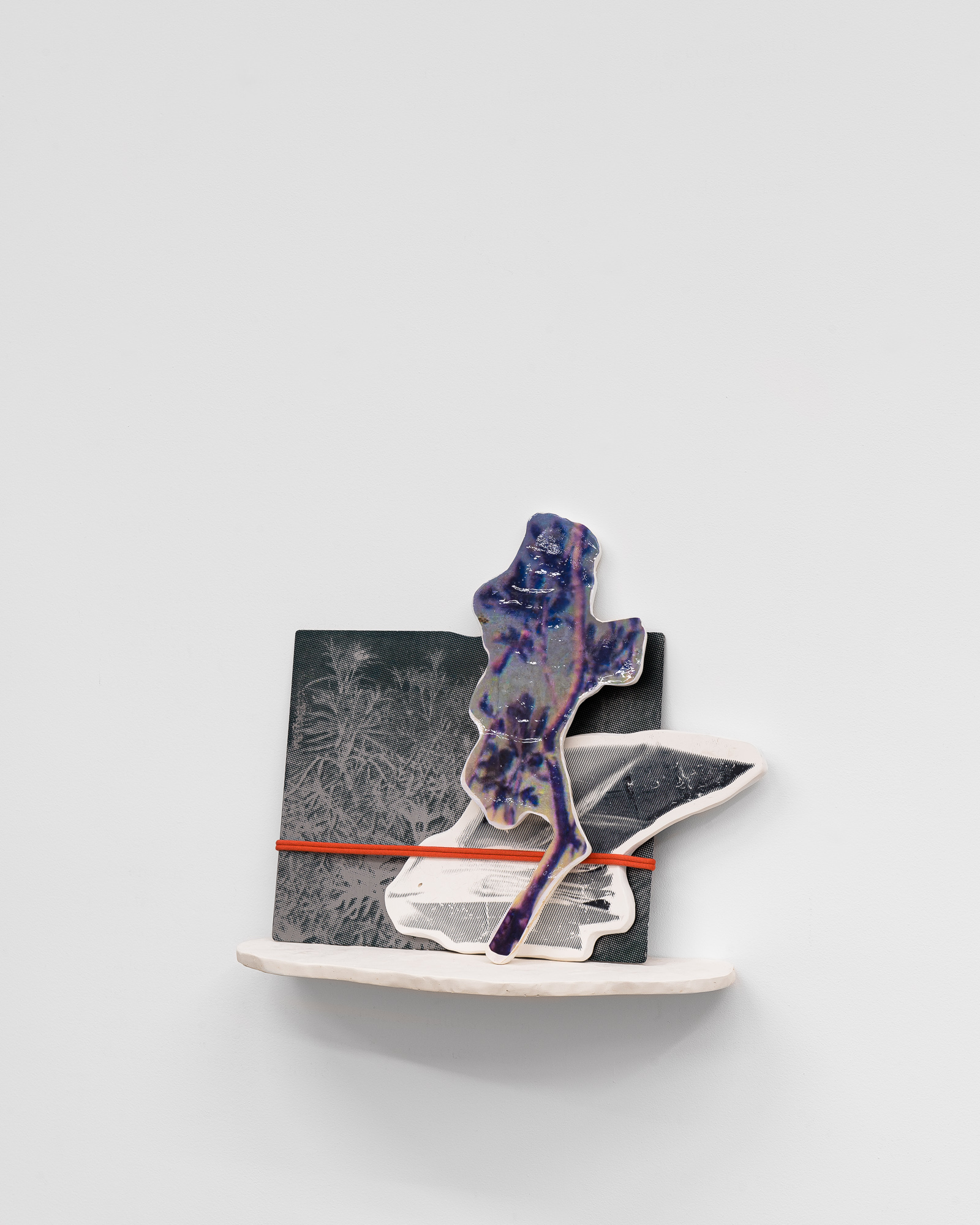 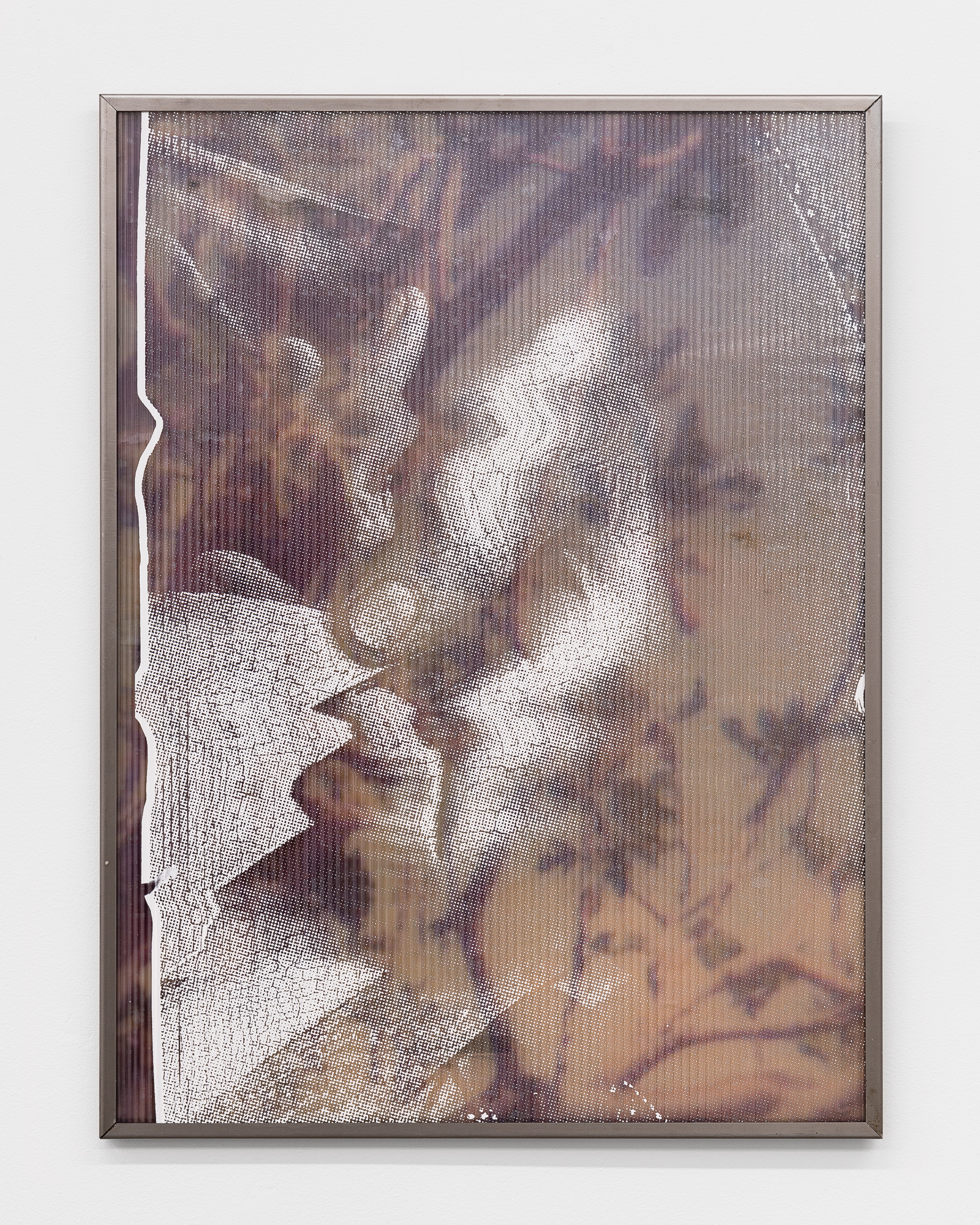 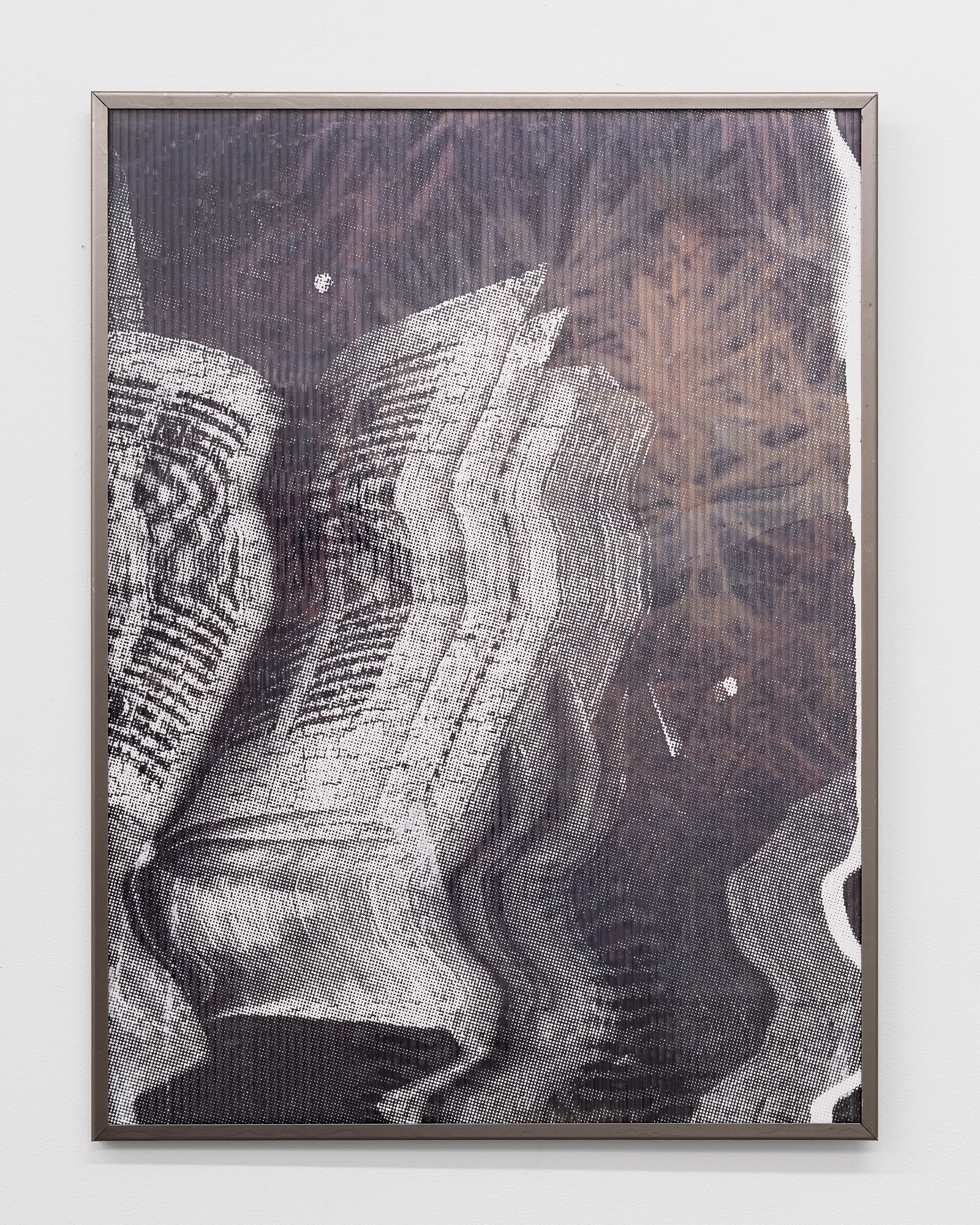 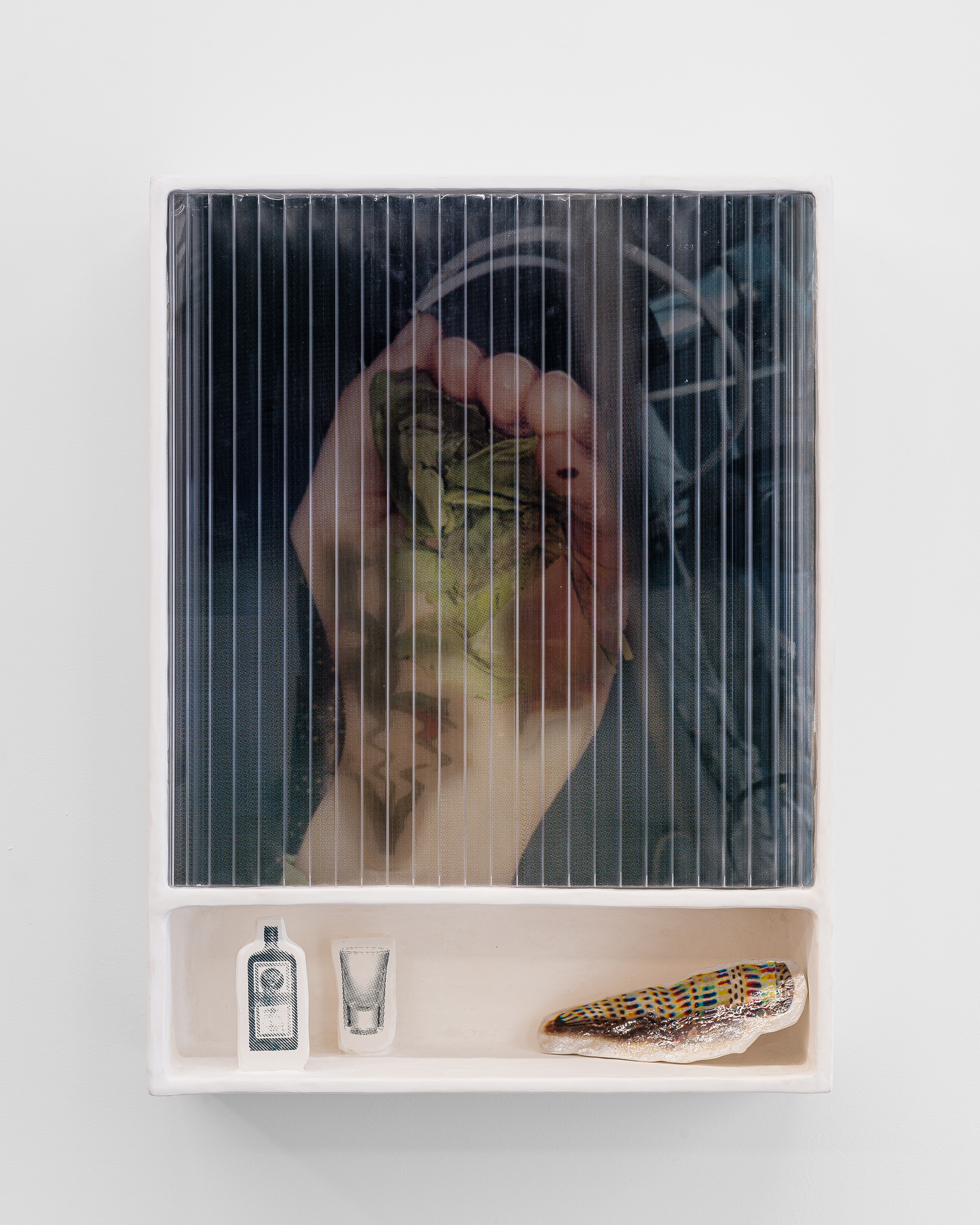 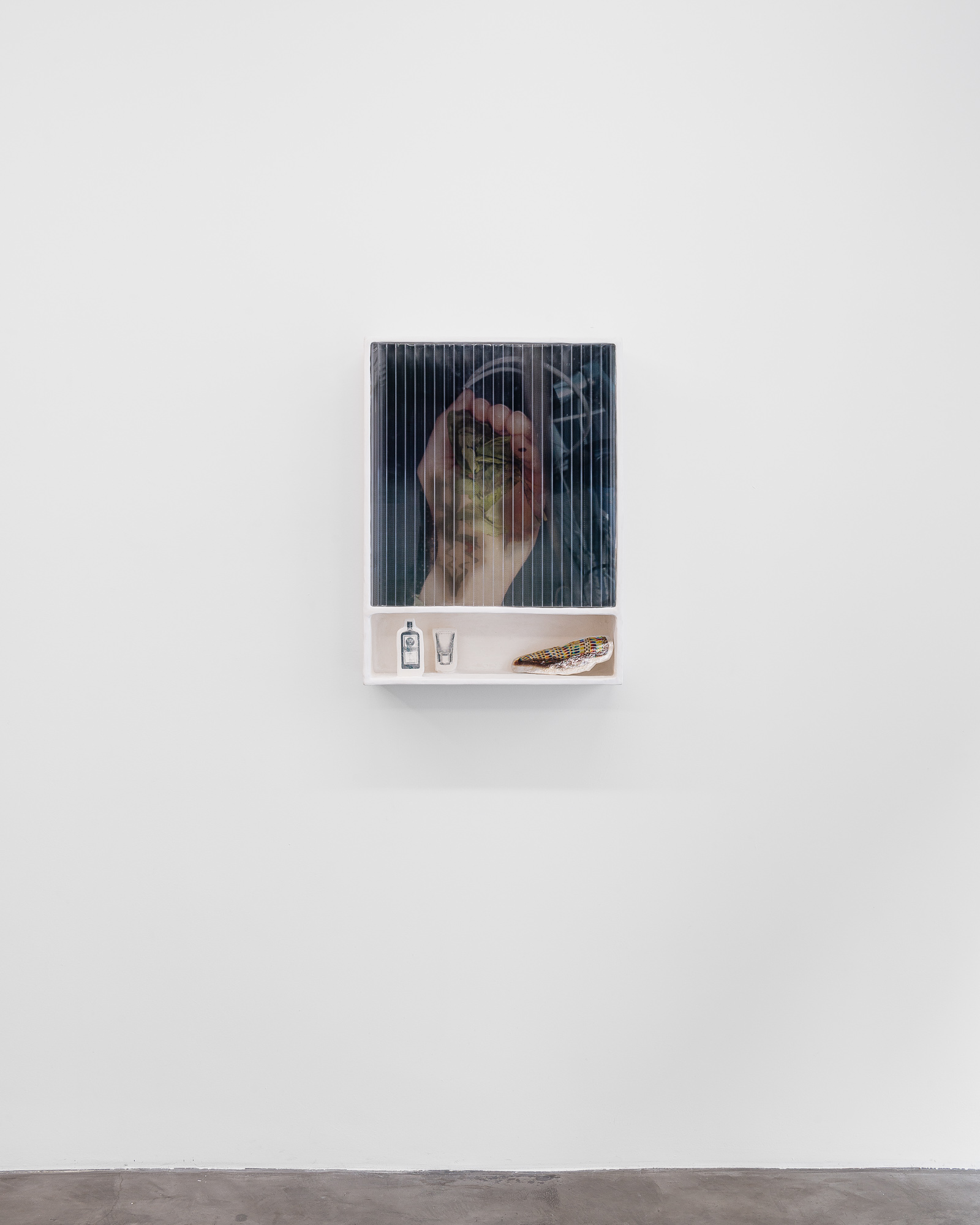 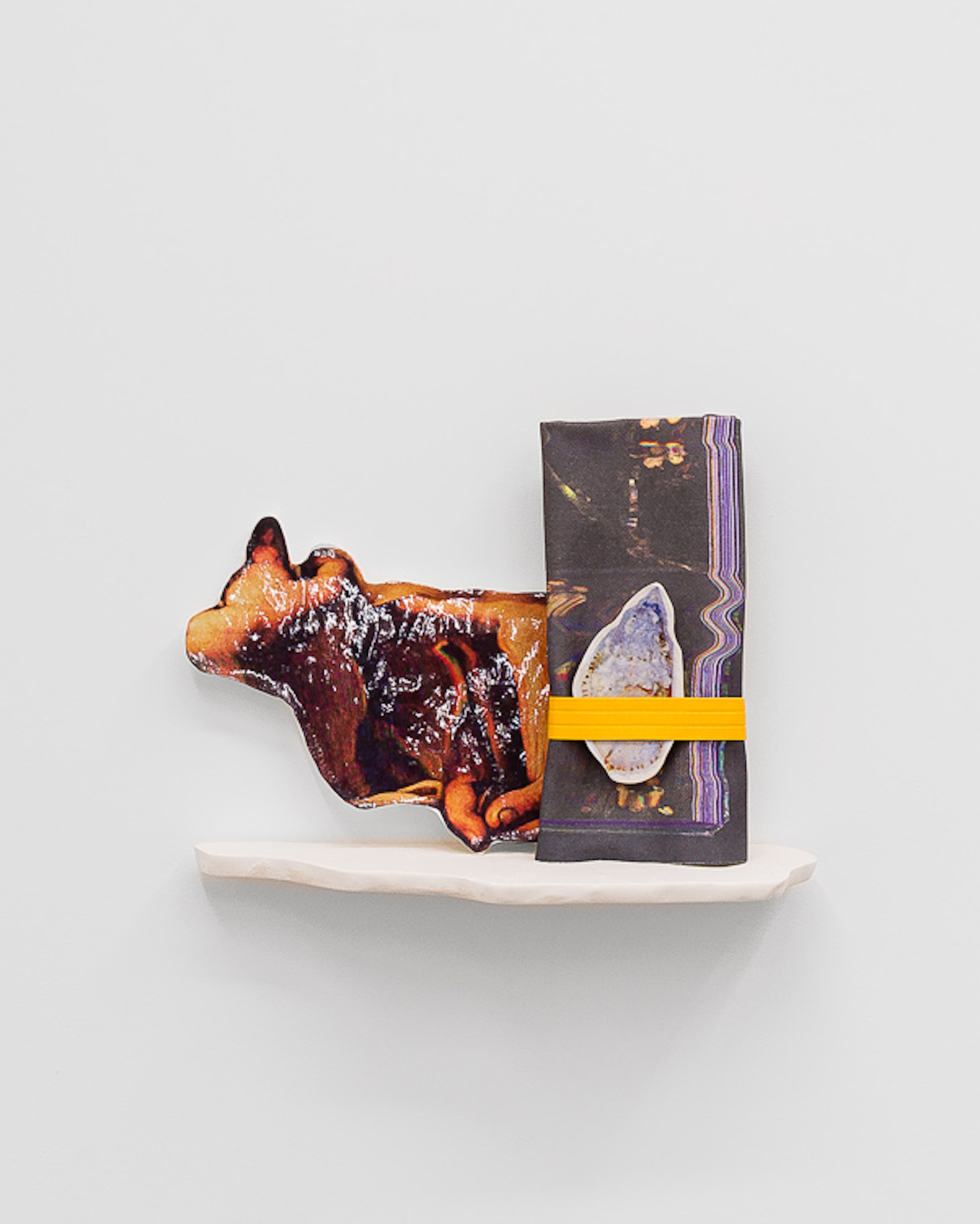 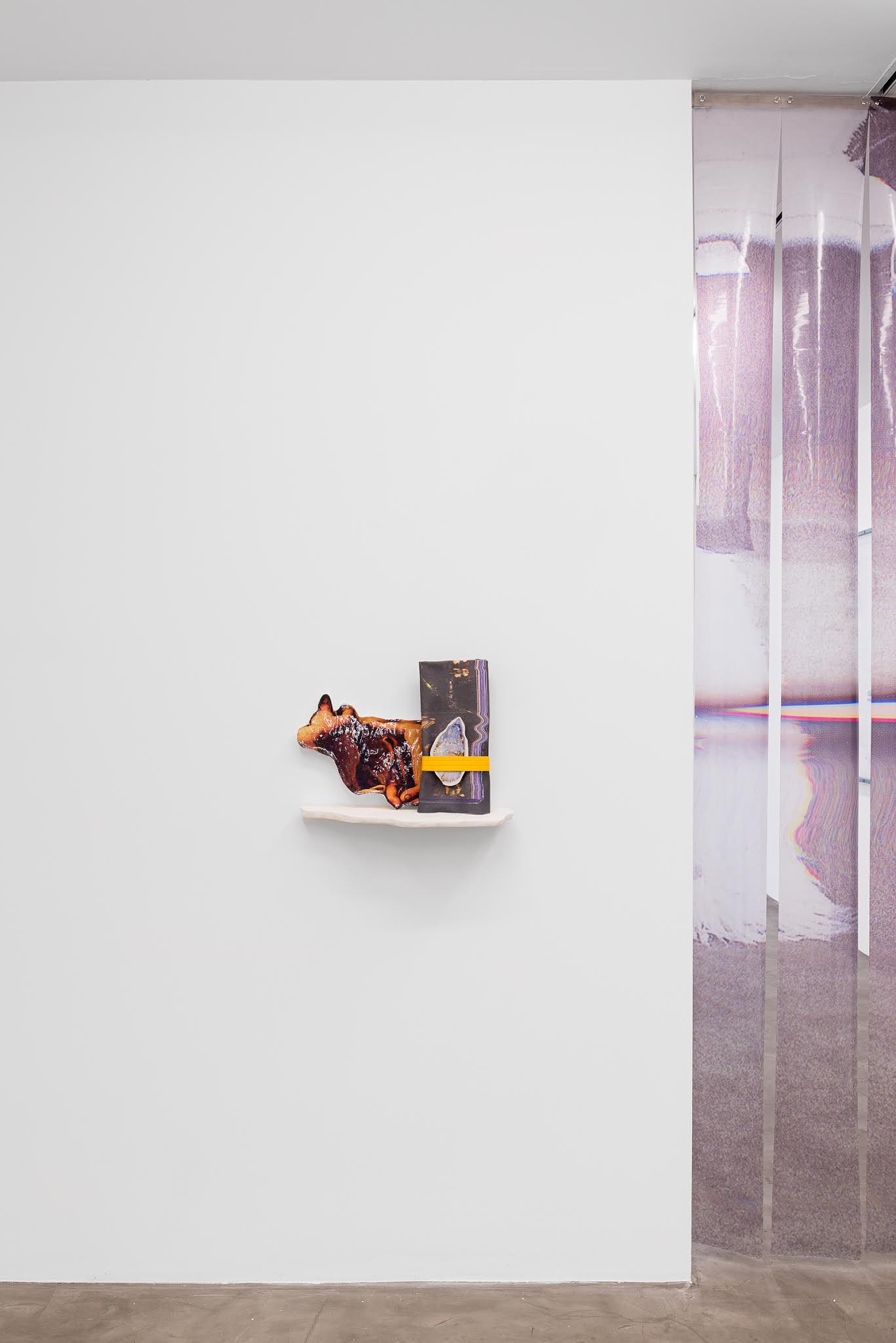 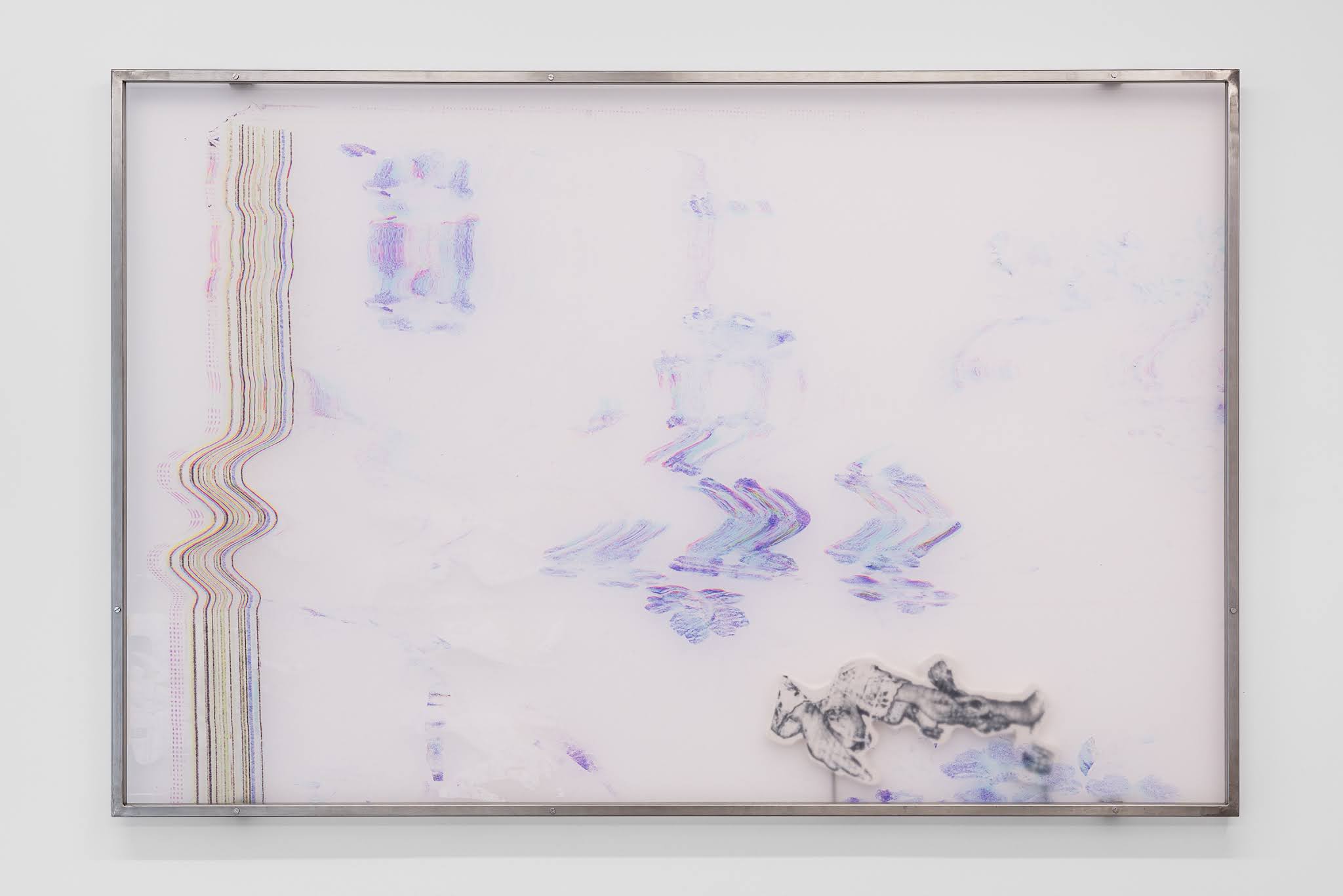 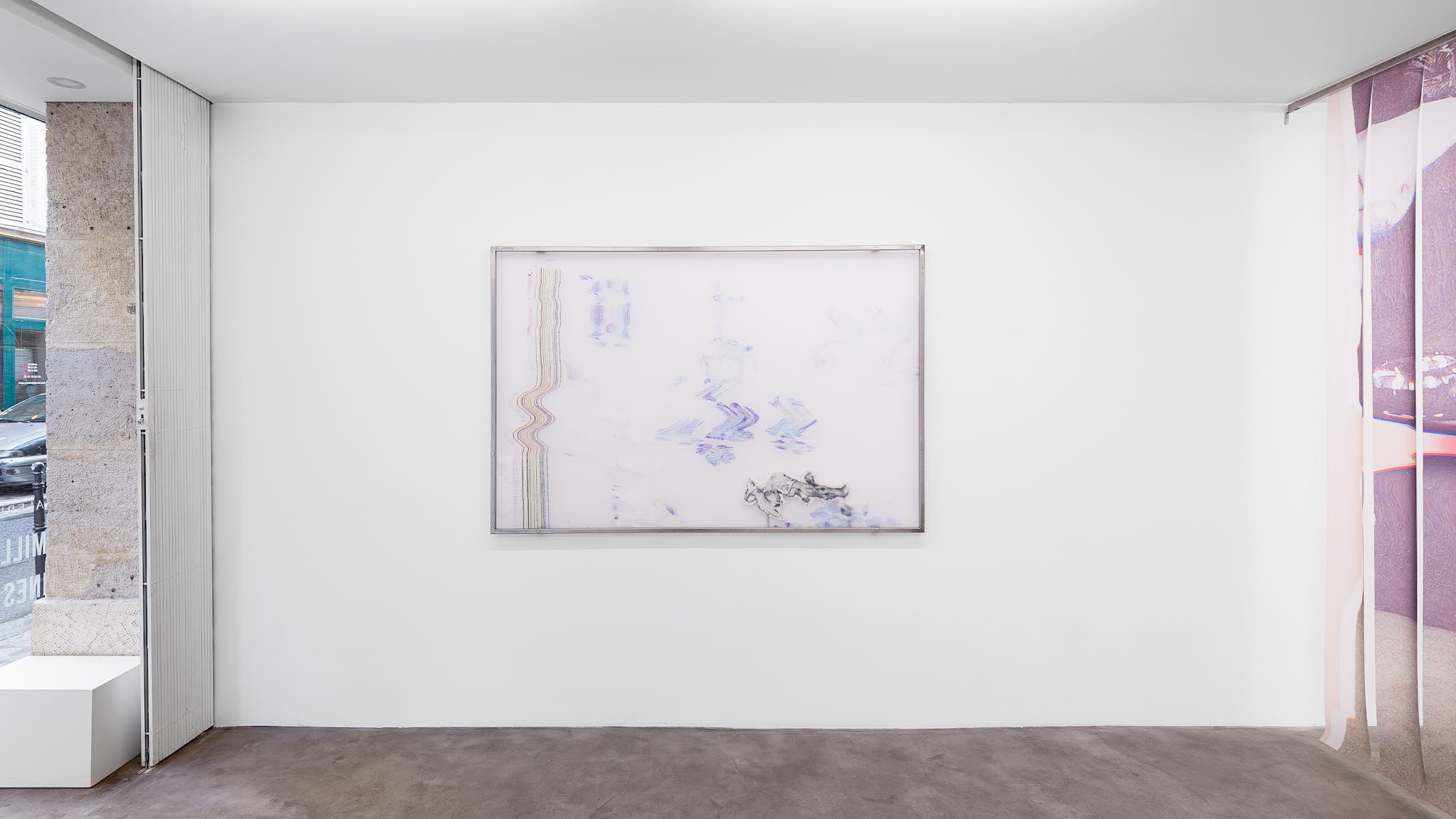 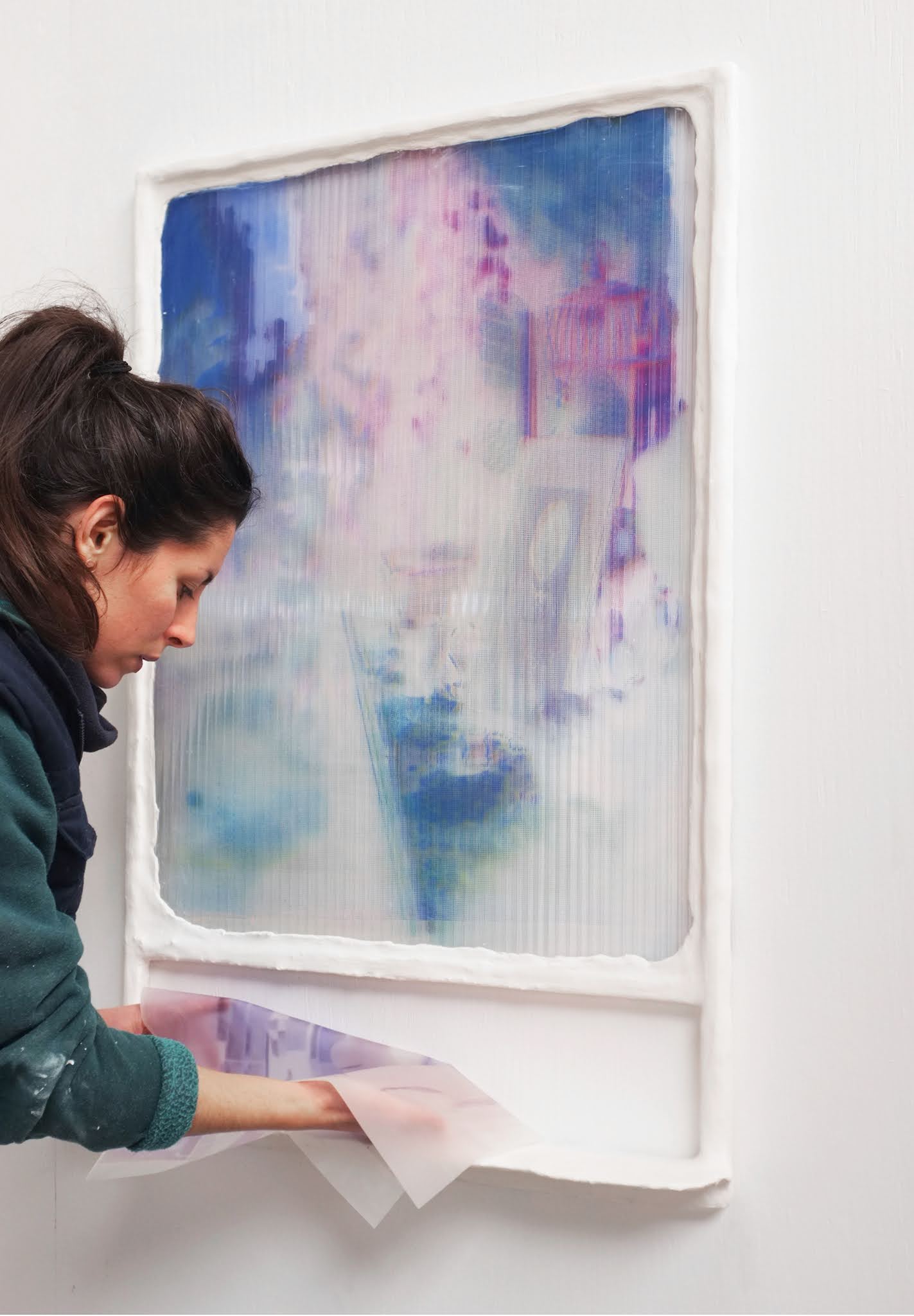 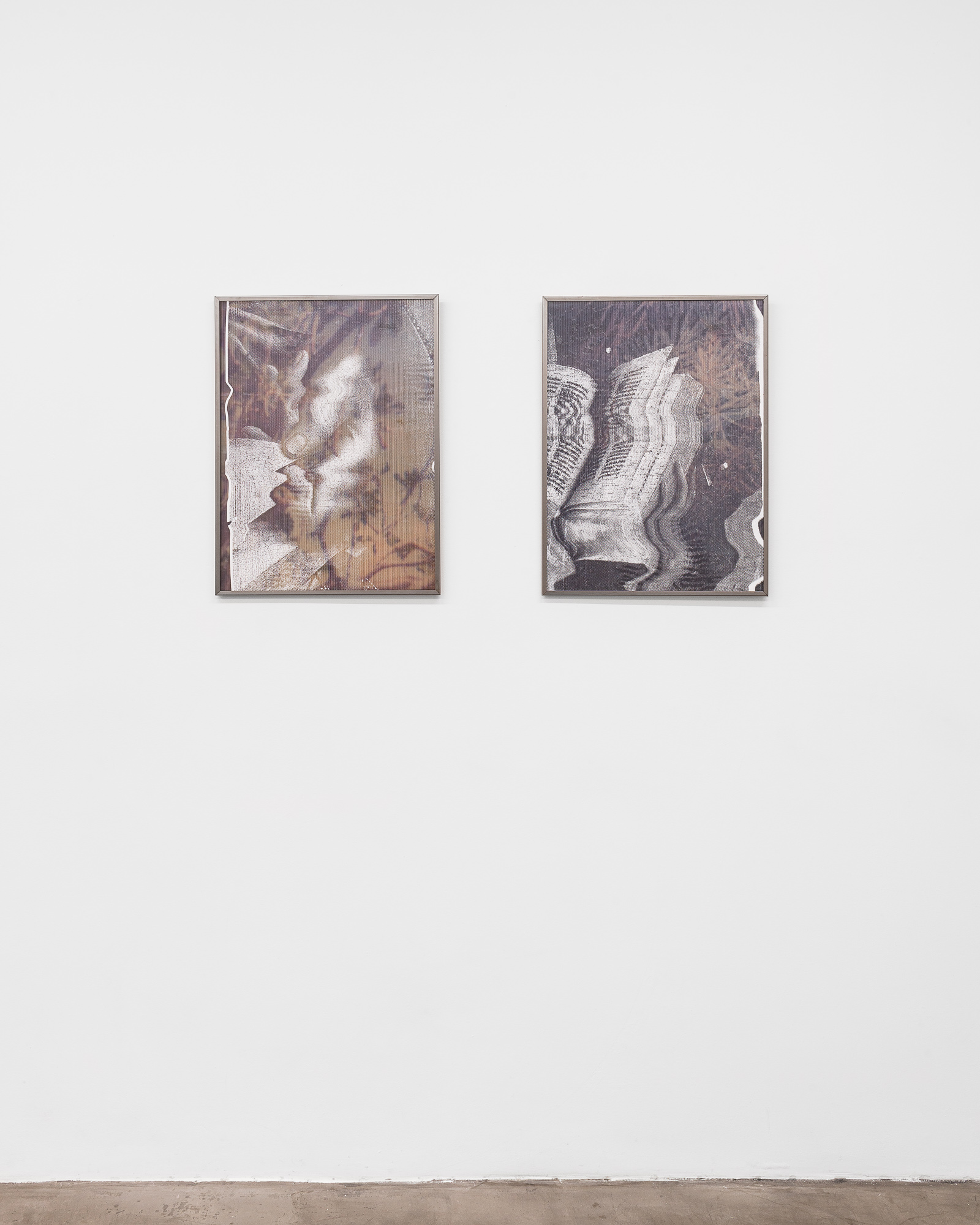 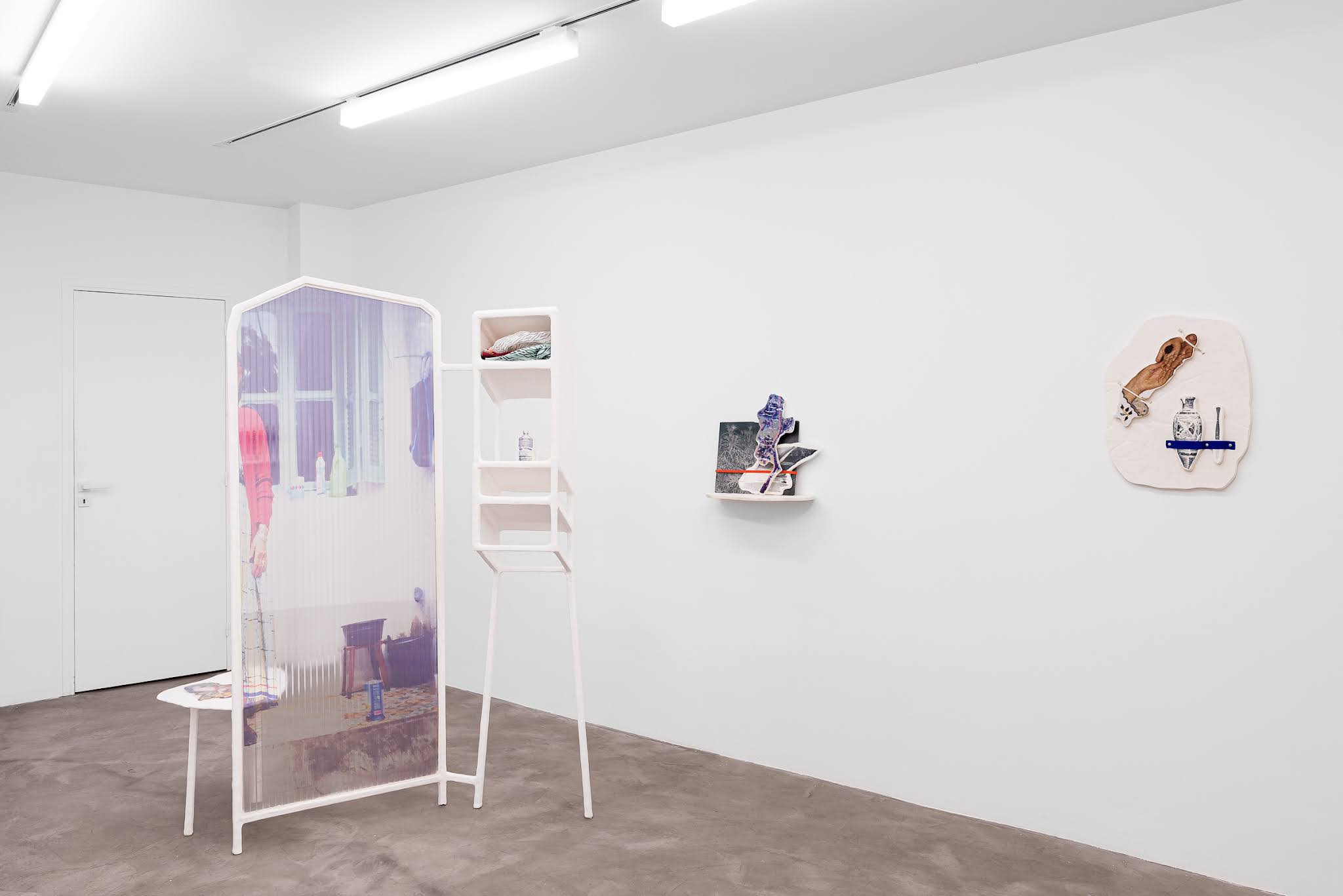 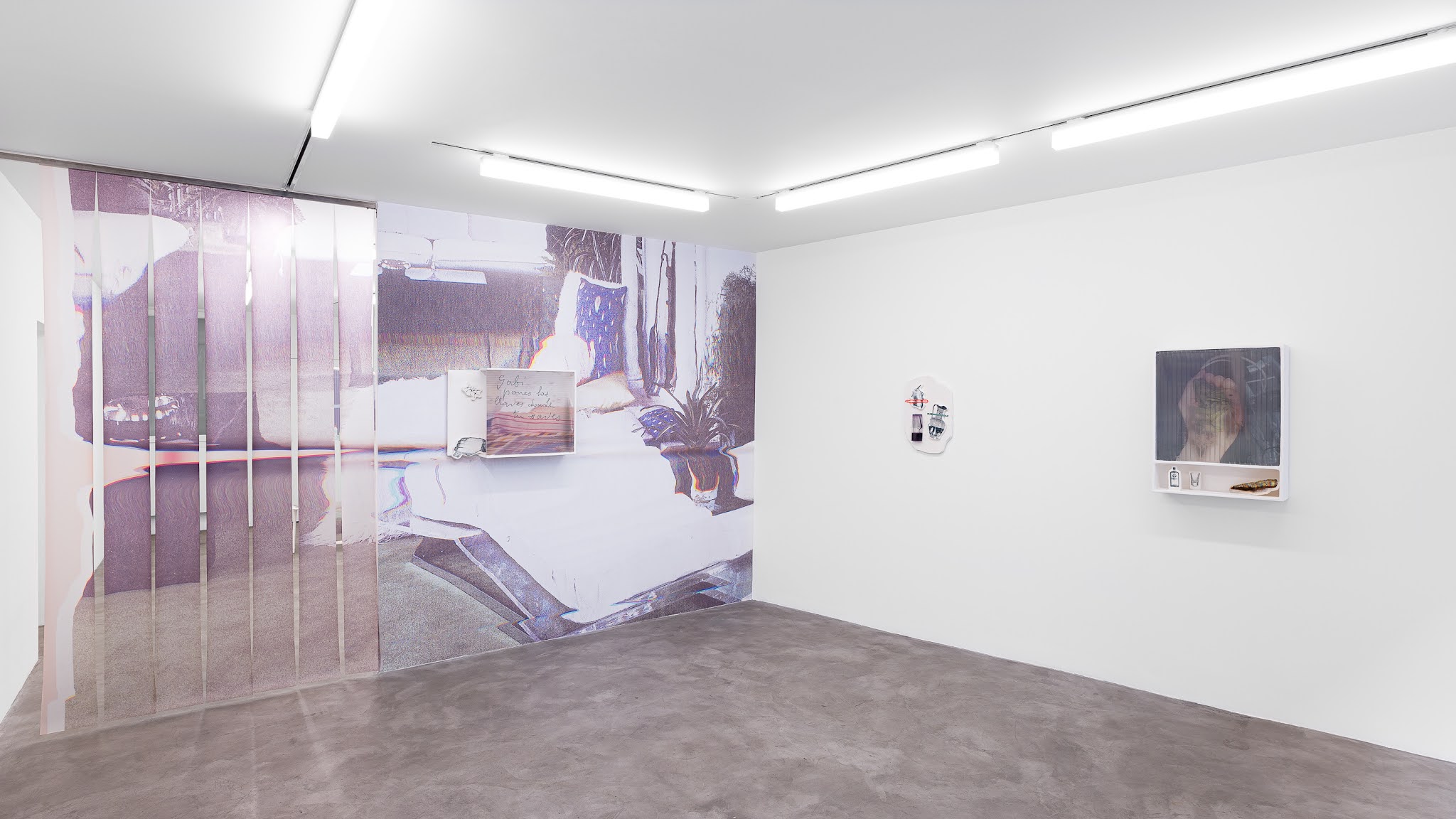 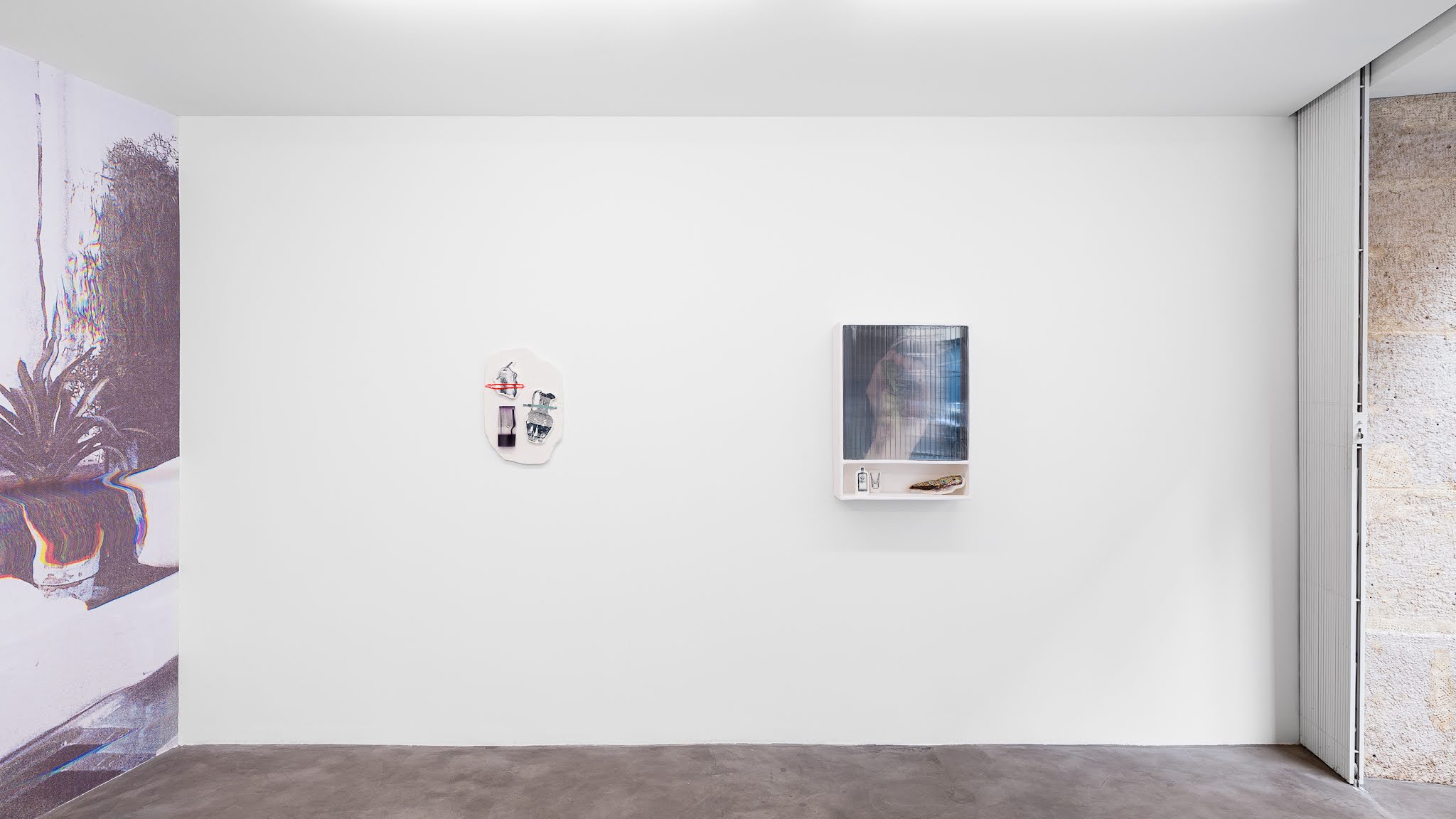 It’s a truism: we live in a world saturated with images. Why, then, add more? In this supermarket of images, Camille Benarab-Lopez is a collector. Using screen shots, photocopies and scans with deliberate blurring, she recuperates images of others during her curious explorations on the Internet and in libraries. Snippets of photography, corners of paintings, she exhumes details and miniscule lives in new materials. The now physical images become sculptures. Playing their textures, they present themselves as texts to be deciphered and as renewed vanities: flowers join shells; family archives are printed on advertising catalogues from the seventies, or are buried, haunted, under obscure baroque paintings. Composite materials and fertile anachronisms meet ad hoc with surrealist malice.

Because Camille Benarab-Lopez favours variety, she disorients us in the images to become a better depository. Through this gesture of appropriation and recycling, the artist- alchemist fights against the inflation of images and her own impossibility– her lost pain– of realising her own. Enticed by purity and order, worried by excess, she tries to contain the flow of icons with her steel-edged windows: she encircles them by surprise, creating incongruous dialogues, as the frame adds a meaning that always overflows.

A taste for secrecy responds to this obsession with order. Its perfume emanates from the nebulous aura of the works that the viewer is invited to discover, even if it means bending over. The artist arranges her tiny treasures, arouses curiosity, weaves the disparate to reveal clues, such as the note written by her Spanish grandmother. Abstraction flirts with the figurative, and the visual oscillates on the threshold of visibility. The work gives rise to a series of waves in which the images are successively hidden and revealed. The outline of a hand can be seen here, the outline of a page there, before everything is swallowed up by the mauve melancholy. Through this modest attitude of love, Camille Benarab-Lopez reveals herself by hiding in the sheets of signs that she composes.

In giving value to the discarded and favouring the marginal, she draws the memory of forgotten images back to the surface. For the exhibition, she recovered a box from her father’s scarce containing photographs of another life in Kabylia. How can we find the warm flavours of intangible summers? To what extent can one connect with one’s origins that have never been claimed? How can one inherit this history and transmit these images? For the first time, the artist is confronted with an intimate material in which the affective wavers. The act of recovering the images is simultaneously a familial appropriation. What responsibility is at play then? The artist brings a formal answer to this autobiographical posture. Without emphasizing a personal archaeology, Camille Benarab-Lopez operates through subtle undertones and amusing comparisons. One thinks of these two interiors of the same time: one vernacular desert atmosphere and another with a slick design she introduces. The landscapes serve as faces to the ancestors whose features are eclipsed amongst the cacti. The anonymity gives them the relief of the universal.

From a family of non-literate immigrants with modest photographic relics, the artist’s work bears witness to a certain distance– a chasm as much as an ascent. Alongside her love of images is a tenderness for books, seen in the caress of a finger on a page, on an ex-voto via the imprint of a work. While lost pain surfaces, sensuality touches us in this ballet of hands that reunite worlds. The skilled hand connects with those applying henna, grasping at the heterogeneity of forms.

All experience of viewing ends in a tactile experimentation, all act of seeing holds a relation with the touch, noted Merleau-Ponty in The Visible and the Invisible (2000), adding that, "it is necessary to accustom us to think that all visible is cut in the tangible," and that, "all tactile being is promised in some way to the visibility, and that there is encroachment, enjambment, not only between the touched and the touching, but also between the tangible one and the visible one which is encrusted in it.” The lacerated curtain only confirms this: the image is rendered sensitive while the bodies cross it. We learn in passing through the curtain that beyond the image, on the other side of this veil of cheap Maya, there are always more images. Camille Benarab-Lopez arranges them in small memory cabinets, arranges humble sacred objects, orchestrating the preparations for a ritual of daily life that is both familiar and foreign. Delicately folded patterned scarves sit next to votive plasters, the trivial next to the precious, the liturgical to the iconographic. The silver rectitude becomes rounded, the atmosphere softens, and the mystical is combined with the domestic.

With Camille Benarab-Lopez, the games of transparency darken as she highlights that truth has settled in the troubled water rather than in the crystalline clearness. Images, matter and memory are thus also lost pains to dress the wounds, to inhabit the void and to reconstruct the image: this complete Image, a puzzle in which everything fits together neatly, nicely, but which in life always remains absent, as Joyce Carol Oates writes (Blonde, 1999). As a response to the absence, Camille Benarab-Lopez claims that the image can only be images, that one always, continuously, slides over another. Indeed: the background of the image is always an image as infinite as sorrows can be, and as for the sweet mystery, it always persists.