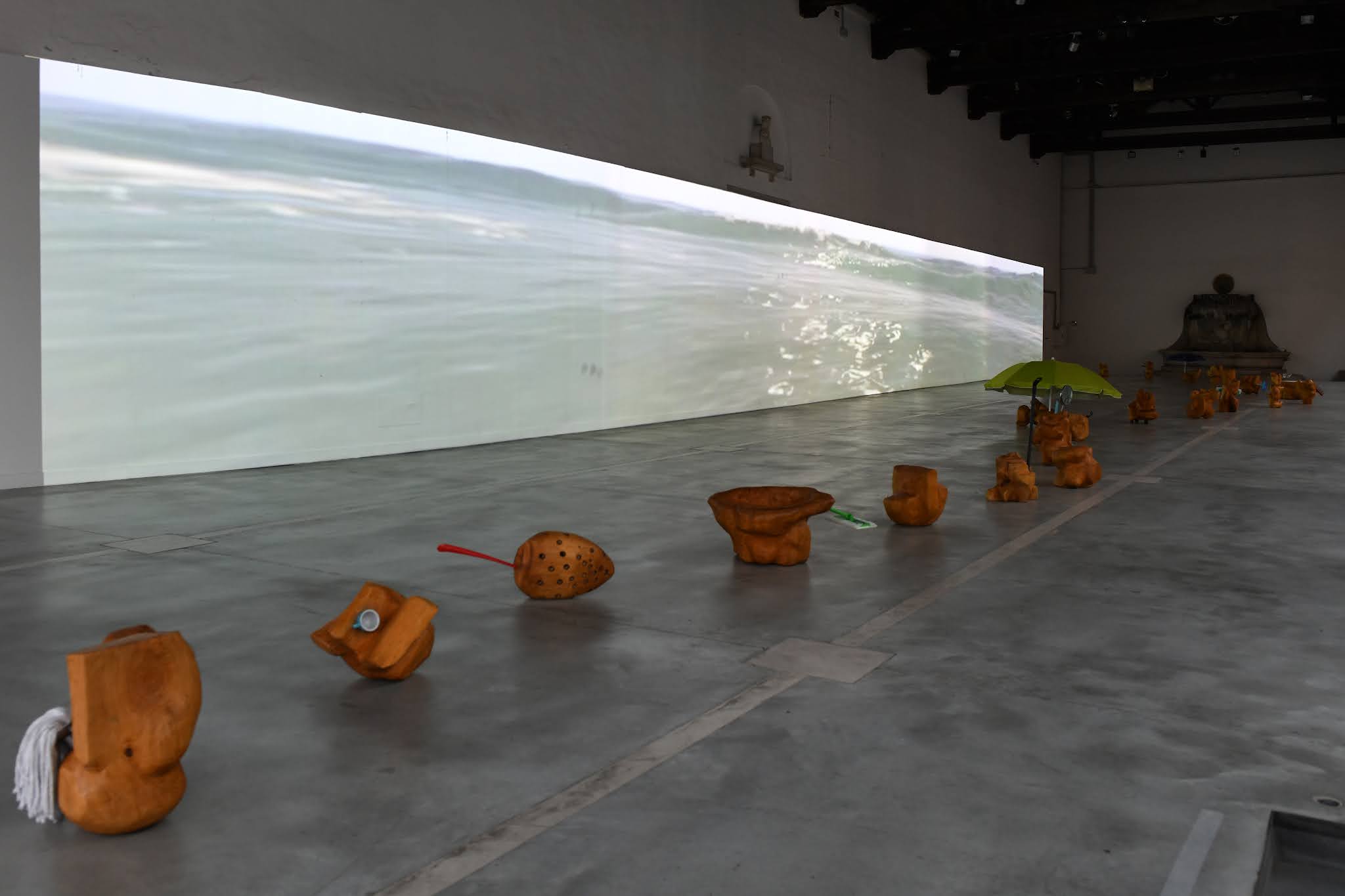 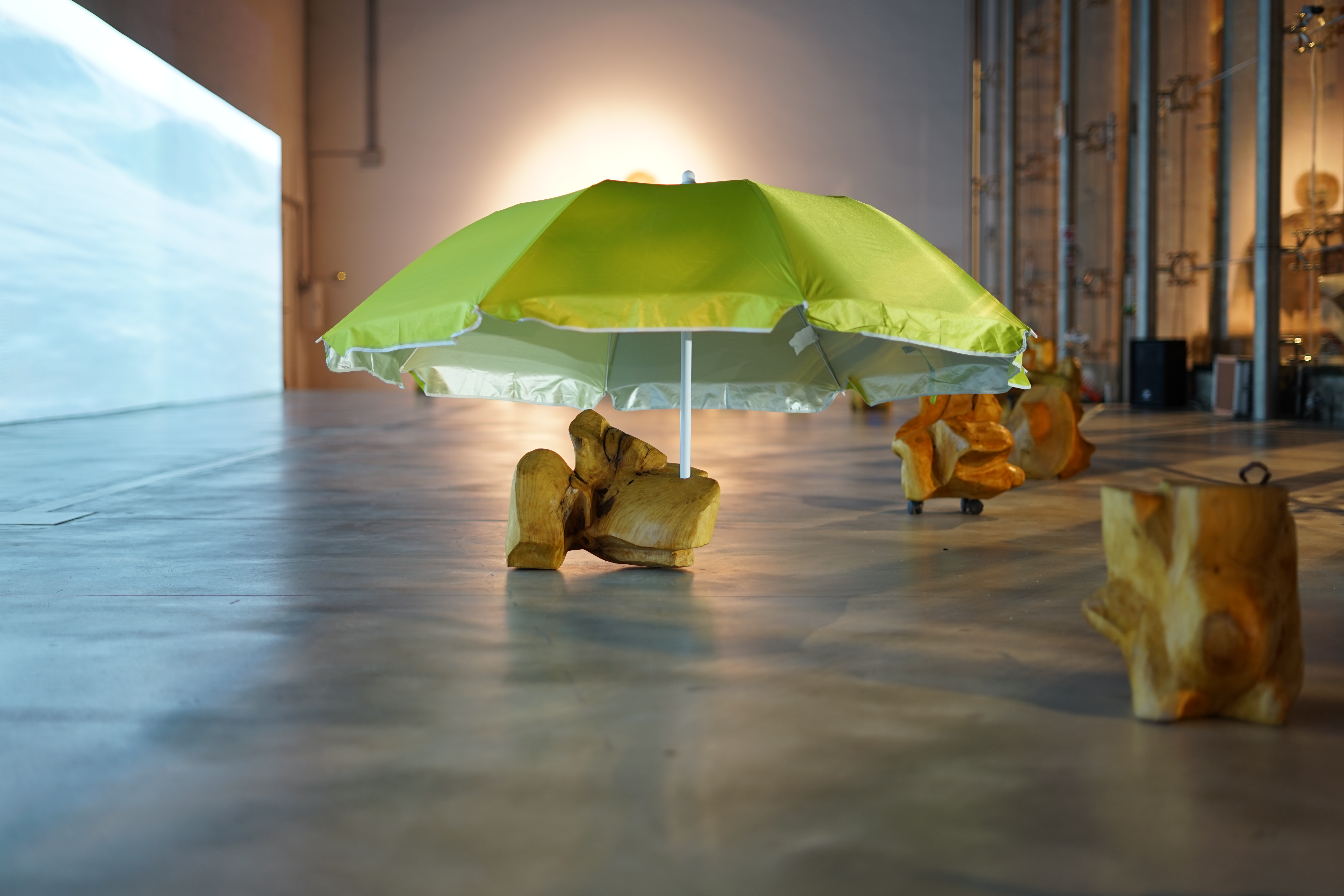 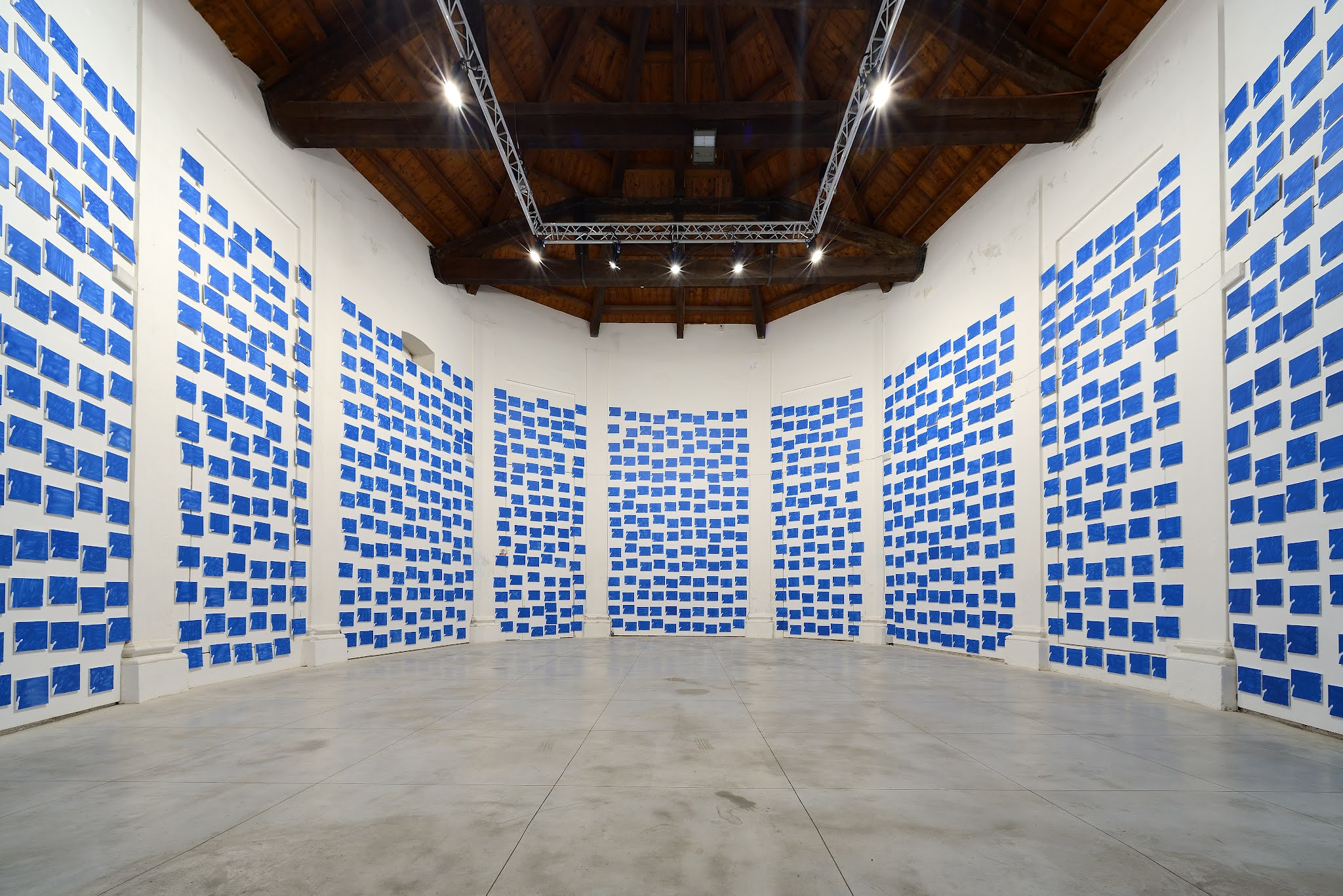 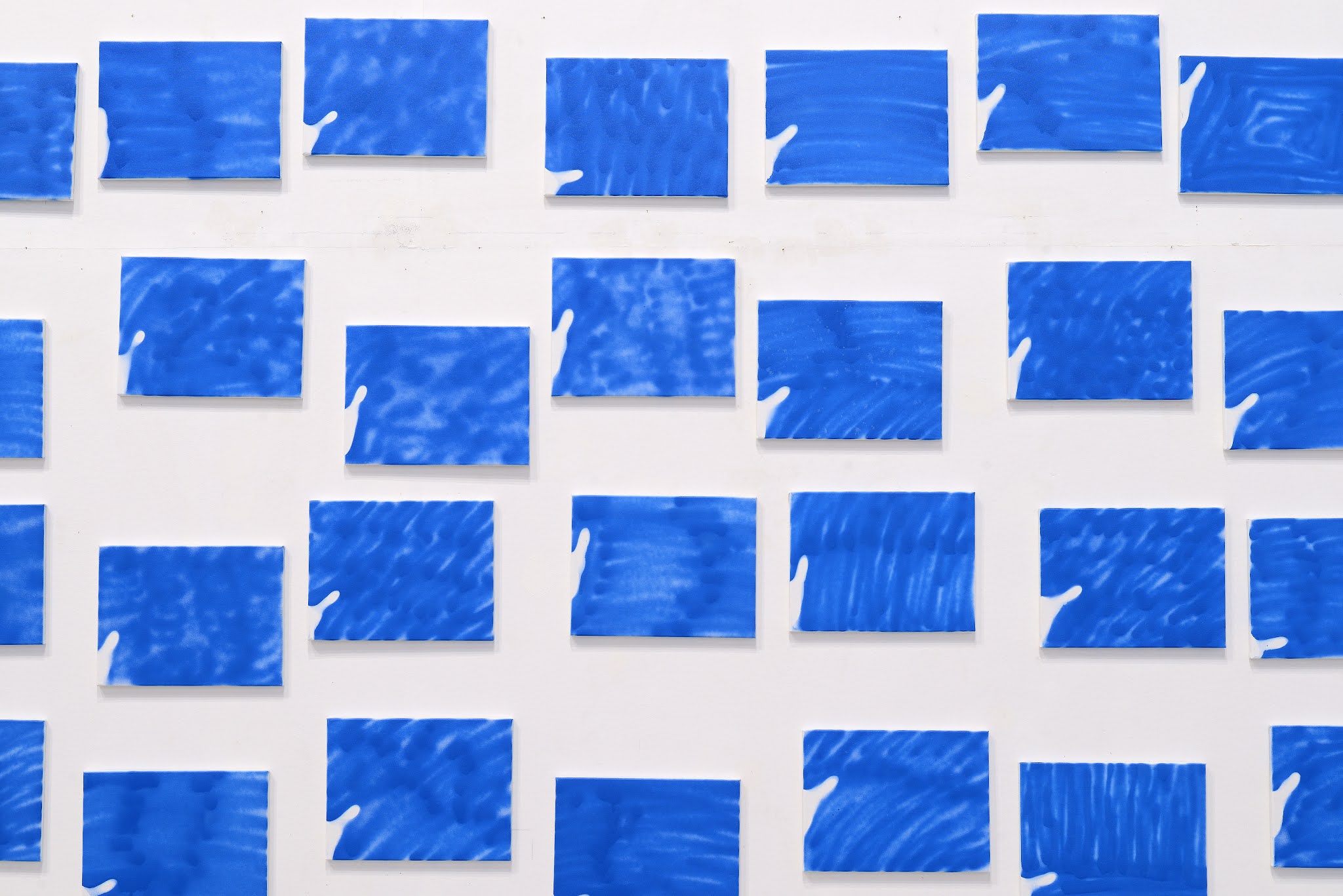 It is now July, and it would be terrible if Pesaro were not by the sea.
Mira il mare má lë – which is a playful mix of Spanish, Italian and Urbino dialect, meaning "look at the sea over there" – is the title of Davide Mancini Zanchi's first solo exhibition in a public institution. The site-specific project conceived for Centro Arti Visive Pescheria curated by Marcello Smarrelli, is the result of a work conceived by the artist during the pandemic and produced with the aim of establishing a dialogue with the architecture of the two spaces that characterise it, namely the Loggiato, home of the old fish market, and the Suffragio church.
Davide Mancini Zanchi creates objects and scenarios where traditional art media exchange roles and functions with common elements taken from everyday life. Colourful and playful, his works often contain obsessions and hostile aspects of conceptual culture and creativity.
In the long wing of the Pescheria, characterized by the monumental brick colonnade overlooking the street, the sea ideally returns bizarre wooden trunks to the beach. By moving through the space, the visitors discovers that these objets trouvés have incorporated other elements: strange metamorphosis that the sea creates by transforming the wood smoothed by the wave into everyday objects. These sculptures seem to merge styles and ways of working inspired by the ready-made, the medium that has defined contemporary life more than any other.
Acts as a background Trevor, a video projection of more than 30 meters, which drives visitors to share the same point of view as Trevor Philips, the protagonist of the PlayStation video game GTA V. The artist crystallises the character in an indefinite time frame in which he gets lost in the boundless horizon of the sea that opens up in front of him. Set in the bloody city of Los Santos (a dystopian double of Los Angeles) where day alternates with night and changes in the weather, the projection, occupies the entire back wall of the Pescheria, and features a constantly changing, swaying horizon. Hands appear frequently overlapping the waves, thereby revealing the artificial nature of this only apparently natural vision.
In the 17th-century Suffragio church, with its characteristic dodecagonal plan, the setting changes radically. While in the Loggiato the eye is 'forced' to look down to the ground to discover the sculptures resting directly on the floor, here it looks upwards.
As Gabriele Tosi writes in the text accompanying the exhibition, "the cycle entitled 1200 études pour le plus beau ciel du monde brings out the oblivion/non-oblivion condition of representational painting on canvas. The large installation, which occupies almost the entire wall surface of the Suffragio church, is composed of an irregular collection of pseudo monochromes". The walls are completely covered with 1,200 same-size (30x40 cm) paintings and are true-to-life copies of the sky above Baia Flaminia. Mancini Zanchi's icastic, playful spirit establishes a dialogue with the history of art by resuming the technique of en plein air painting, revisiting and taking the Impressionist lingo to extremes and replacing the oil tube with a contemporary spray can. On each canvas, there is a white outline: it is the fingerprint of the finger holding the canvas to paint the sky.
The exhibition is also a reflection on the relationship between nature and artifice, which, though a long-standing theme in artistic research, is particularly topical in this historical moment, as we witness a profound fracture between mankind and nature and between nature and objects. We live immersed in a world made up of artificial objects, in which the machines, which are deemed less and less unnatural, have become an integral part of a new mechanised, electronically integrated nature.
On the exhibition, the first monograph dedicated to Davide Mancini Zanchi – edited by Gabriele Tosi and published by Cura.books, with graphic design by Francesco Del Rosso –, which collects and analyses all the works made by the artist up to his solo exhibition at Centro Arti Visive Pescheria, will be presented.
The project, promoted by Fondazione Pescheria, is produced in collaboration with the Municipality of Pesaro and supported by the Marche Region – Department of Cultural Heritage and Activities.
Tags Daily Lazy., Davide mancini zanchi, fondazione pescheria, marcello smarrelli, pesaro
Newer Post Older Post Home