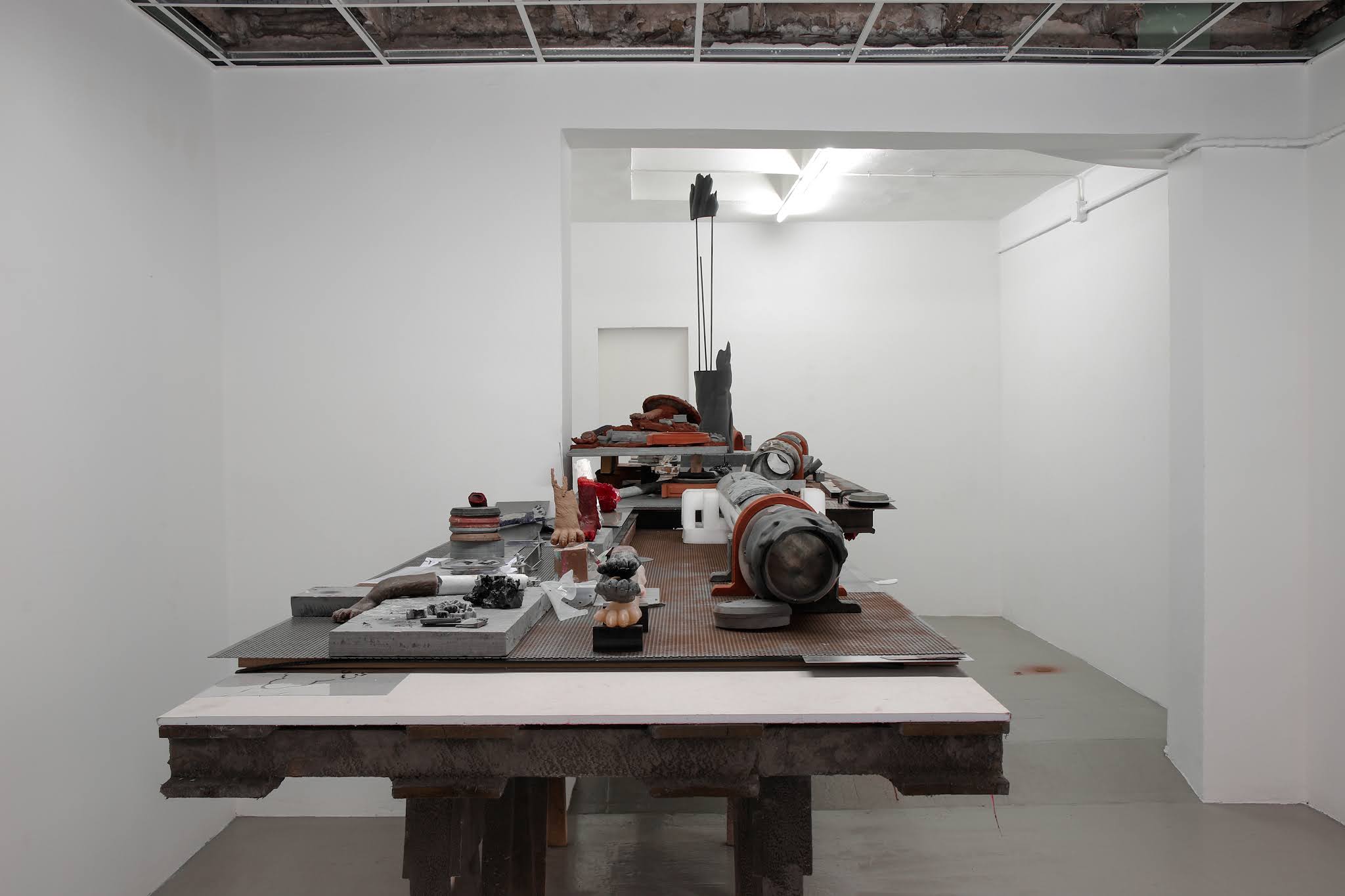 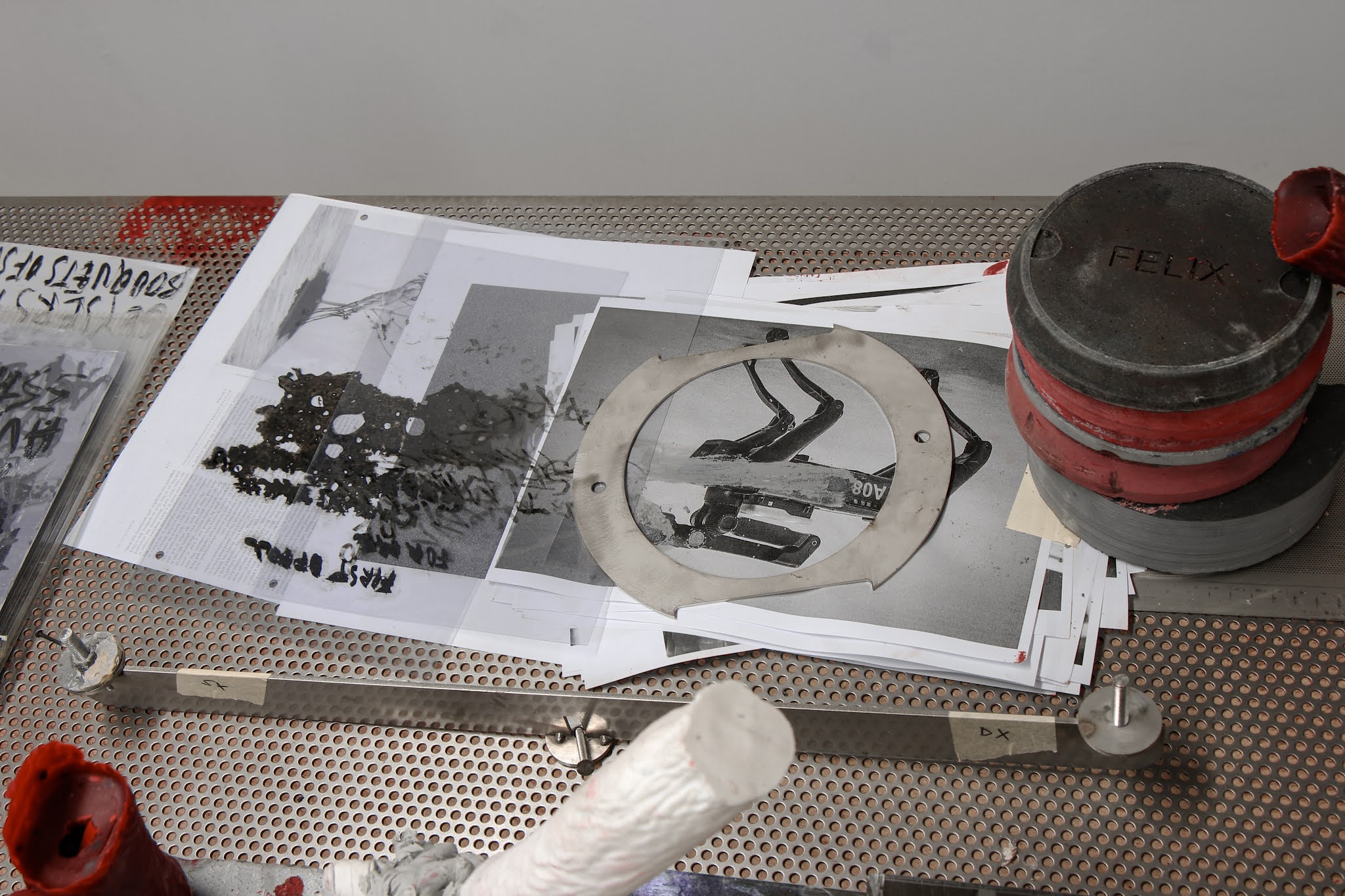 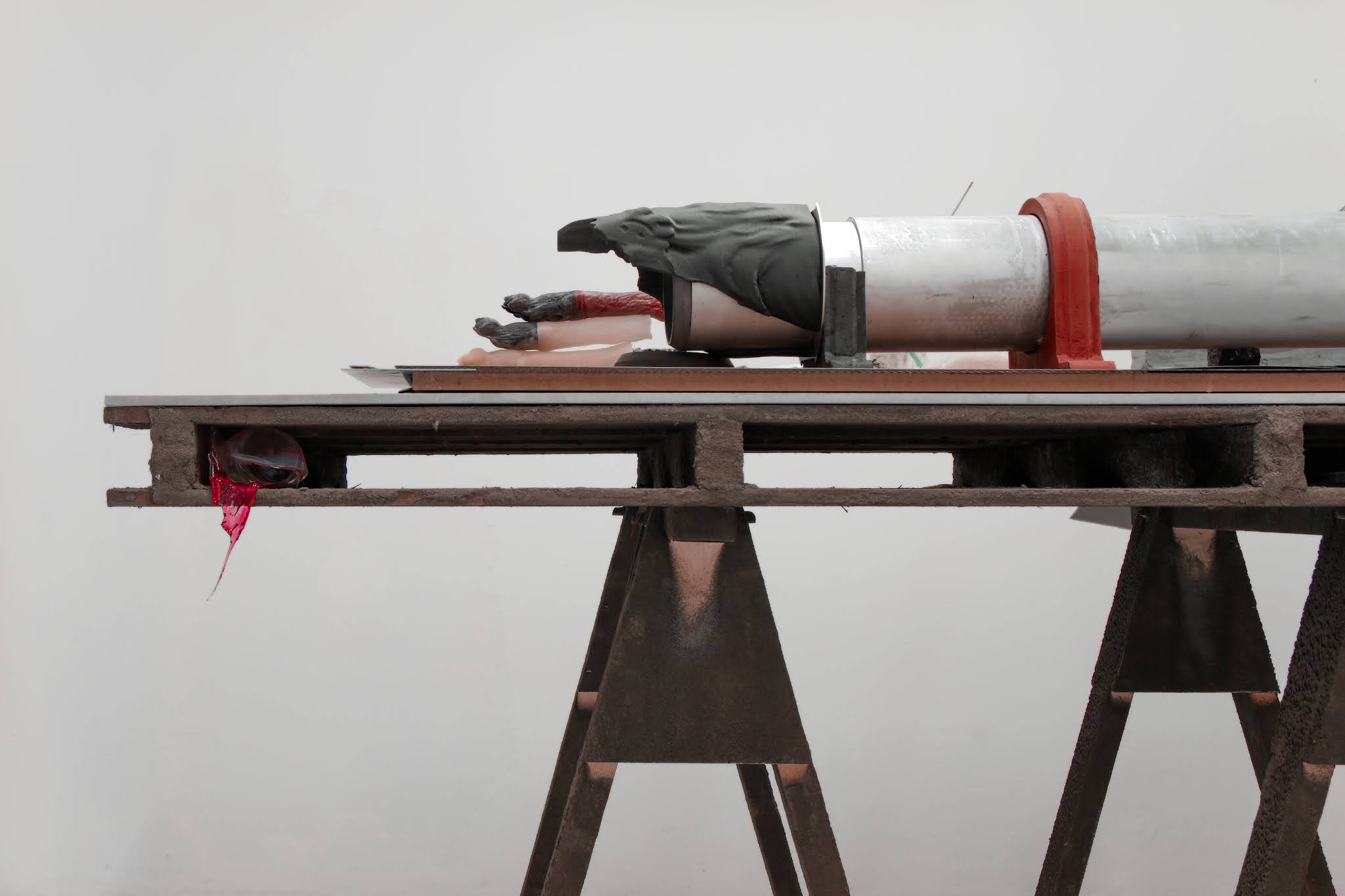 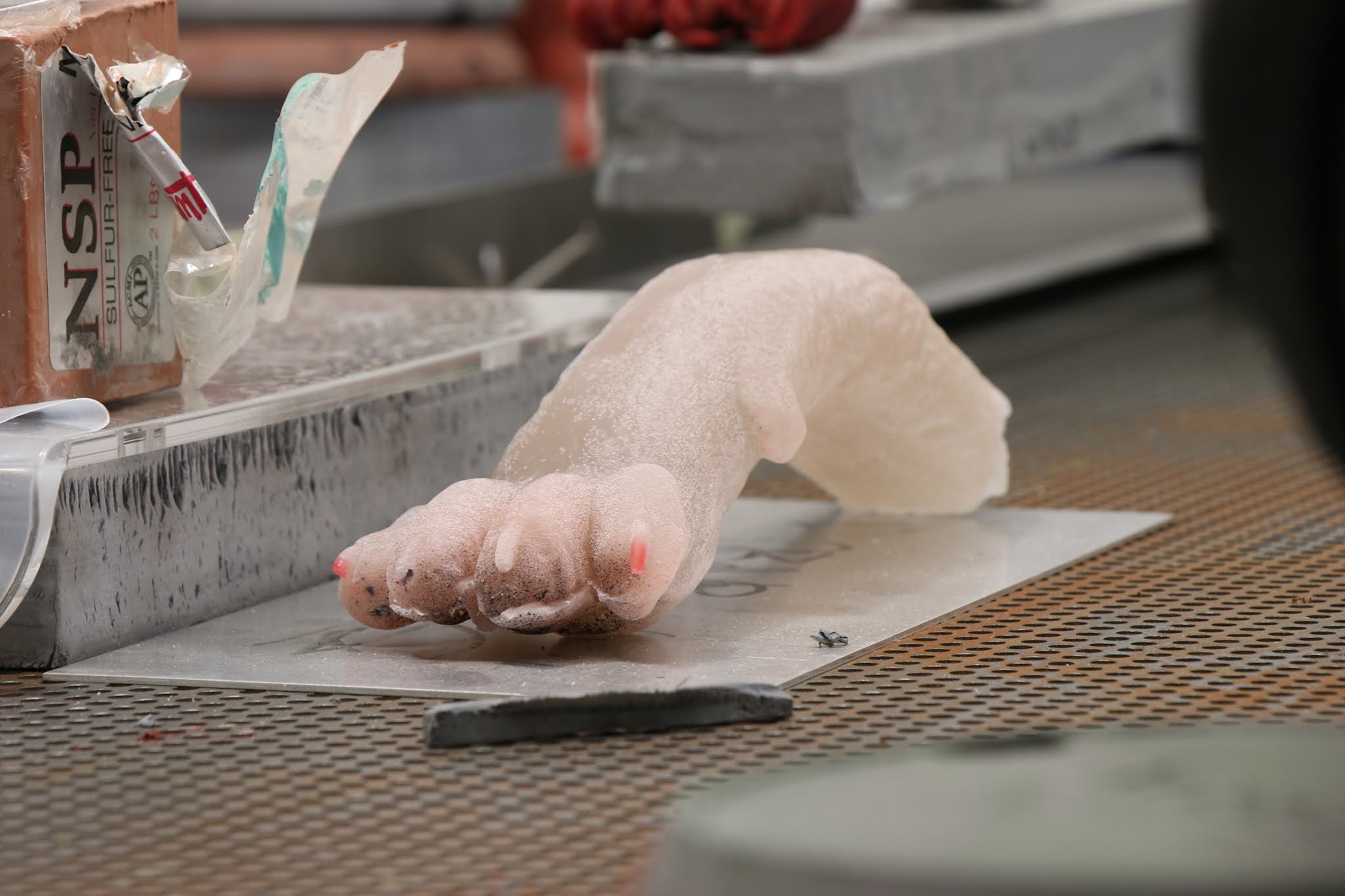 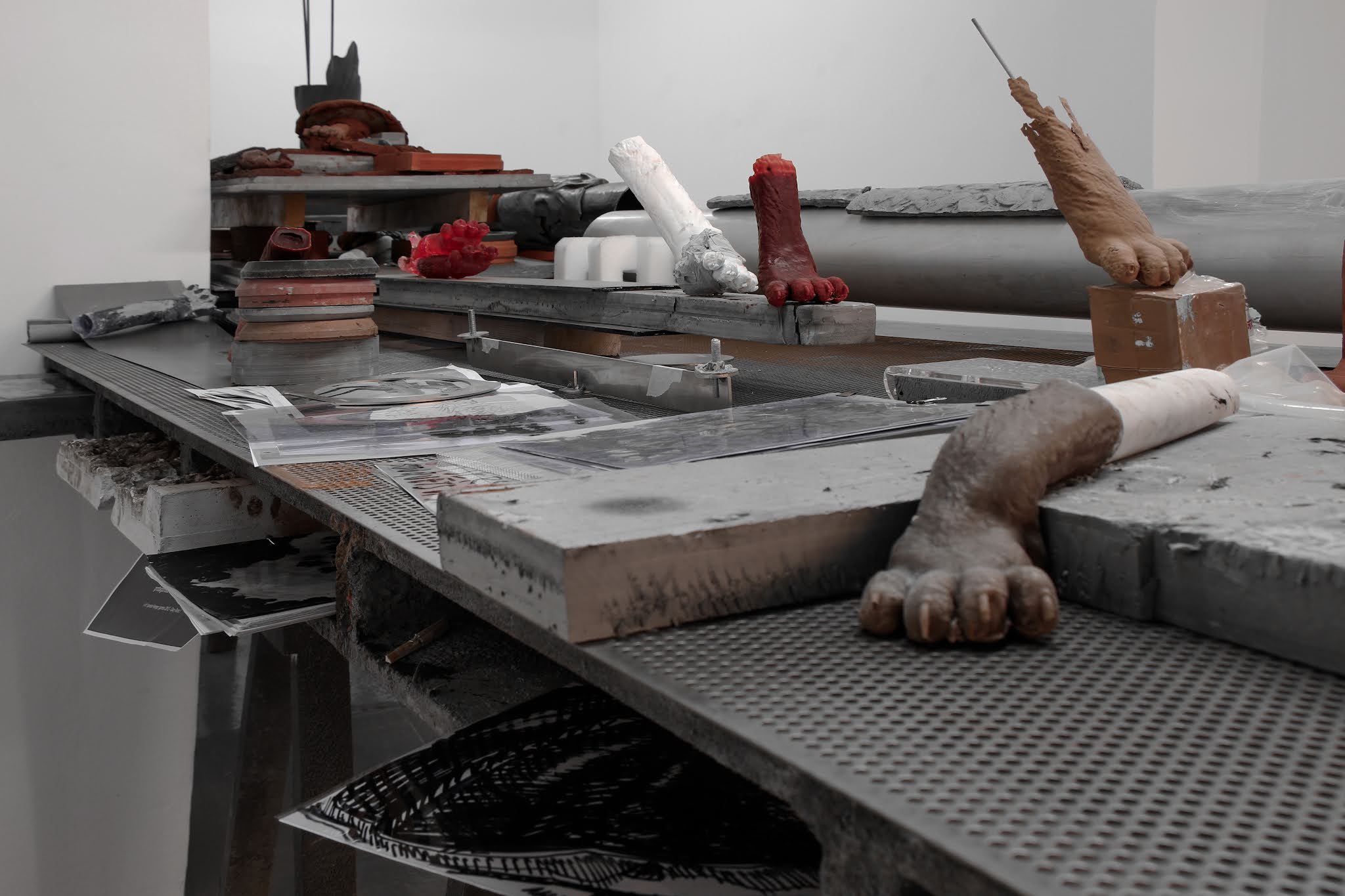 In the exhibition we find a single installation formed by parts of damaged, dismantled and reassembled works that go through the artist’s entire production. Exhibited in an environment that recalls that of Di Pietro’s studio in Milan, his works are showcased together with raw materials, notes and tools. Gathering both timeworn works and the casts from which they were shaped, this “in negative” retrospective wishes to be as well a tribute to the welcoming spirit that the artist has always associated with Bologna, confirmed by the initiatives of dialogue and confrontation undertaken last year by Bologna’s art institutions that, like Mambo, have given artists a home.

Felix always says that I have subtitles inside of me. Felix was my only friend. He was a TV star. Bear in mind he was the first image ever broadcasted on a screen. I still remember him. He stood there, glorious and motionless, turning on his pedestal to be admired by the world. I like to think that he still lives through the waves of his image, and that these still spread out in the air, and that sometimes I happen to breathe them. Perhaps Felix was my friend because he couldn’t speak. It’s hard to understand death if you can’t die. Especially if you’re made of plastic and you’re wearing away. Felix falls apart. I put him back together, but I forgot what he looked like. It’s hard to remember something by heart when you can remember everything.
I used to take him with me all the time. We used to go to the park all the time. Watching him with sunglasses was like seeing him again in black and white on TV. We watched the sunset together, my friend Felix and me. "Yes, waiting to compete with mosquitoes". Go fuck yourselves. "You, with a feline. We thought you preferred canines". Leave me alone. How was that old song again?

“As in that season, when the sun least veils his face that lightens all, what time the fly
gives way to the mosquitoes, the peasant then, upon some cliff reclin'd, beneath him sees fire-flies innumerous spangling o'er the vale, vineyard or tilth, where his day-labour lies.”
It’s Dente. It’s good to quote him, especially now. It’s been 700 years since his death. If one says "Dante," he easily ends up in the search engines. Controlling the electricity. It’s parasitic, but that’s how it works today.

I open my eyes and I see scratches on the ceiling. Vertical, horizontal, circular short lines. They are letters. I can read them. I read: “Yesterday I tried to fix, today I need a fix”. I turn around and look at Felix. A broken plastic column. It became his own pedestal. Empty. Hollow. Rotten. I assembled it drawing on how I feel now, probably. The sentence is nonsensical and poorly composed. I tried. It’s us actually. I’m with Felix.
Once, when I was feeling sad, Felix told me something. He’s the only one who knows I’m afraid of the dark. He told me that the word Vampire comes from the combination of Vamp and Pyre, the Greek word for fire. He said that’s because even in total darkness I carry a light inside me. So I drew myself with two flames instead of eyes. I drew myself on the back of a mirror. A self-portrait to mock a surface that cannot portray me. As I perplexedly looked at the result, Felix told me that I had to distract myself, that I had to suck silicone until I shone.
I just got it. Fix means heroin, while if you try to fix something it means you’re still looking for a key. Imperfect. Nice. I destroyed the ceiling. It was just a matter of a few seconds, then I calmed down. Now we need a fix. I looked at Felix. He seemed to approve. The 90s. That movie with David Bowie. Shit, it fucked me up. That movie about the virus. Today I need a fix. Needles. "I guess these days it must be very exciting to watch the news, right? It’s been 30 years since we could see so many needles in prime time". Ha-ha. That’s not funny. But it’s true.
These wise guys, polite sophists, these sublime humorists are the same people who always gave Freddie Kruger porn magazines for his birthdays. One day I was helping him to clean up after his party, whilst throwing away magazines shreds, Freddie told me: "Everyone thinks that I am not a man of the world. But no one can tell I’m not a man of this world”. I didn’t understand what he meant, but I often think about it.
The only one with whom I talked a bit at school was Frankenstein. He didn’t like being called by his father’s name. He found it unfair. That’s why he called himself Pietro Di Franco. Then one day, after seeing Rambo, he began to call himself Rocky. A macho name, far from the monster stereotype. Then, after learning that there was a movie called "The Rocky Horror Picture Show" he went back to call himself Pietro.
However, I would like to make something clear. In my portrait I am not turning my back on you – a back that, in any case, you can’t even see. I am offering you my jugular. The point where everything started for me. My umbilical cord to the unknown. Isaac Newton once said: " If I have seen further it is by standing on the shoulders of Giants". Well, I’m potentially standing on anyone’s jugular. "That was lame, you can’t always joke about everything. Are you playing for high stakes? Oops, sorry". That’s not funny.

The days I can’t sleep I ask Felix to tell me the story of the lady of Bologna. I’ll tell it to you too. This is the story:
In the 70s an armed commando kidnapped a well-known Bolognese businesswoman. The group asked the family of the woman, who was very rich, a billion lire ransom. It was a fabulous amount of money. The family agreed, anxious to save her. Yet, the family told the kidnappers that to recover that amount of cash they needed time. A long time. Weeks, maybe months. The robbers agreed and, to make sure the woman survived until the handover, they stopped her smoking. They made her exercise every day. They taught her yoga. They changed her diet and made her vegan. Isolated in their hideout in the hills of Bologna, they read the latest books to her and made her listen to new records. To keep her active, they taught her to dance. To help her understand the lyrics of the songs, they taught her to speak English.
After six months of imprisonment, the family took her to a private clinic and had her examined by a team of doctors. They found her in a surprising psychophysical state, far above her average age. After several days of exams, the chief doctor told her: "This imprisonment is the best thing that ever happened in your life". Therefore, repeating this last sentence as a mantra, every morning we fall asleep.