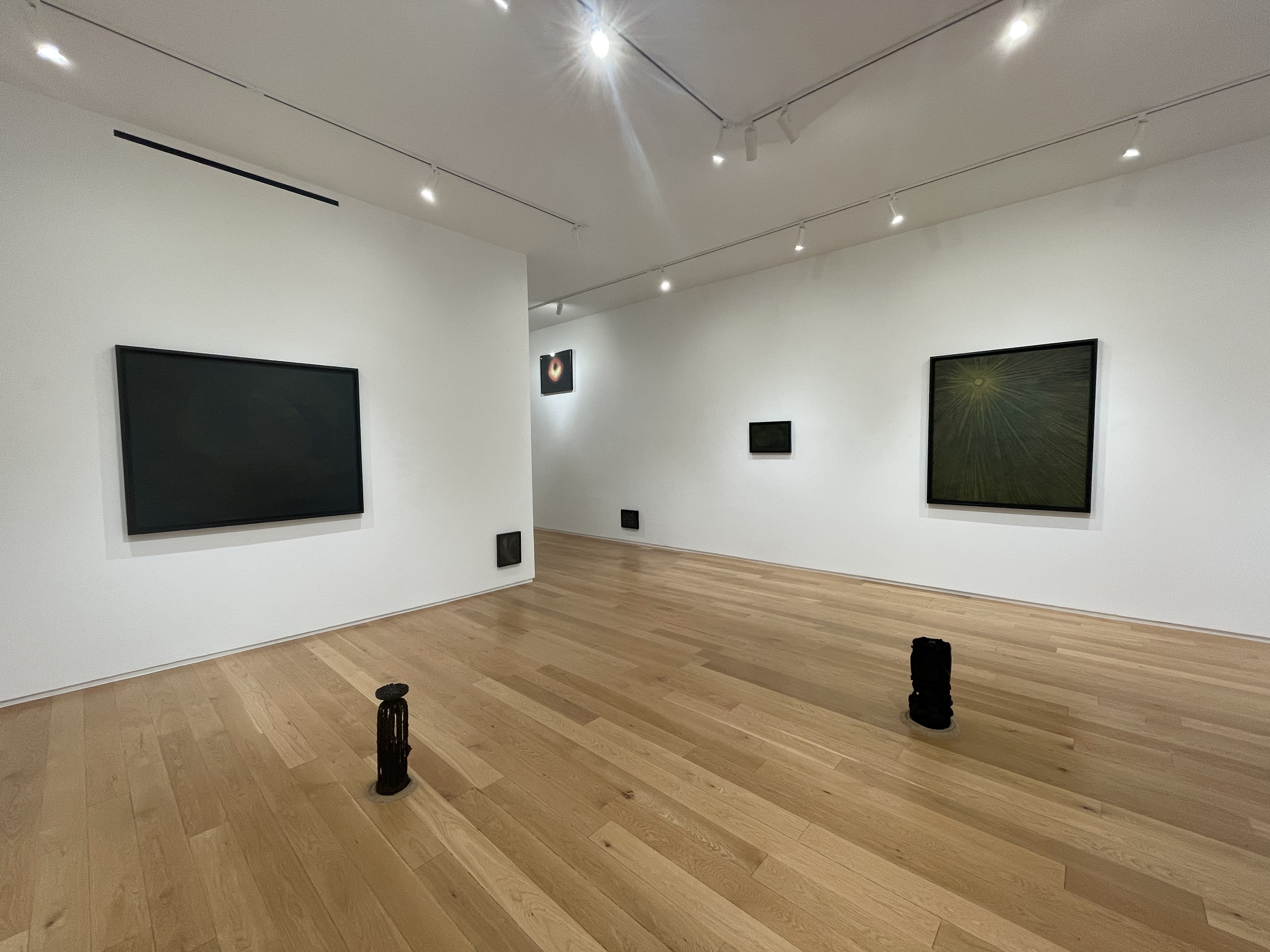 Upon exiting a small elevator onto the third floor of a building on Madison Ave you find yourself in a stark white room with thin lettering on the wall. There is a desk to your left with friendly faces welcoming you, yet your body is pulled toward the far right of the small, boxy but warm space: you’re in Alexander Berggruen, a gallery on the Upper East Side of Manhattan.

A collage of dark, yet bright objects fills a short hallway placed carefully, intentionally, and invitingly. They beckon you toward the end of the gallery like creatures awaiting your arrival, they are just as curious about you as you are of them. They range in size, some so small you crouch down to examine them, some so large you back up to admire them. These objects vary in medium and material, however, all were clearly made by the same loving hands. They appear both fragile and grounded. Multidisciplinary artist Angie Jennings’ first solo exhibition in New York City, Angie Jennings: Guides from the night fields is powerful and kind, one of its greatest and most unique qualities lies in its embodiment of duality. Jennings’ works provoke thoughts of consciousness, philosophical experiments, art historical references, and contemporary politics.

The exhibition presents an enticing juxtaposition between science and spirituality; some pieces, like Blackhole, a 23 x 29” pastel work, remind the eye of looking under a microscope, or at a close-up image of a burning star. While others, like the series entitled, Unnamed Spirit Drawing appear as though someone has captured a paranormal moment, a flashlight in the dark, or a child playing with a glow stick in the grass on a hot summer night. Jennings’ chalky works mimic nature as they call upon spiritual and ritualistic energies. 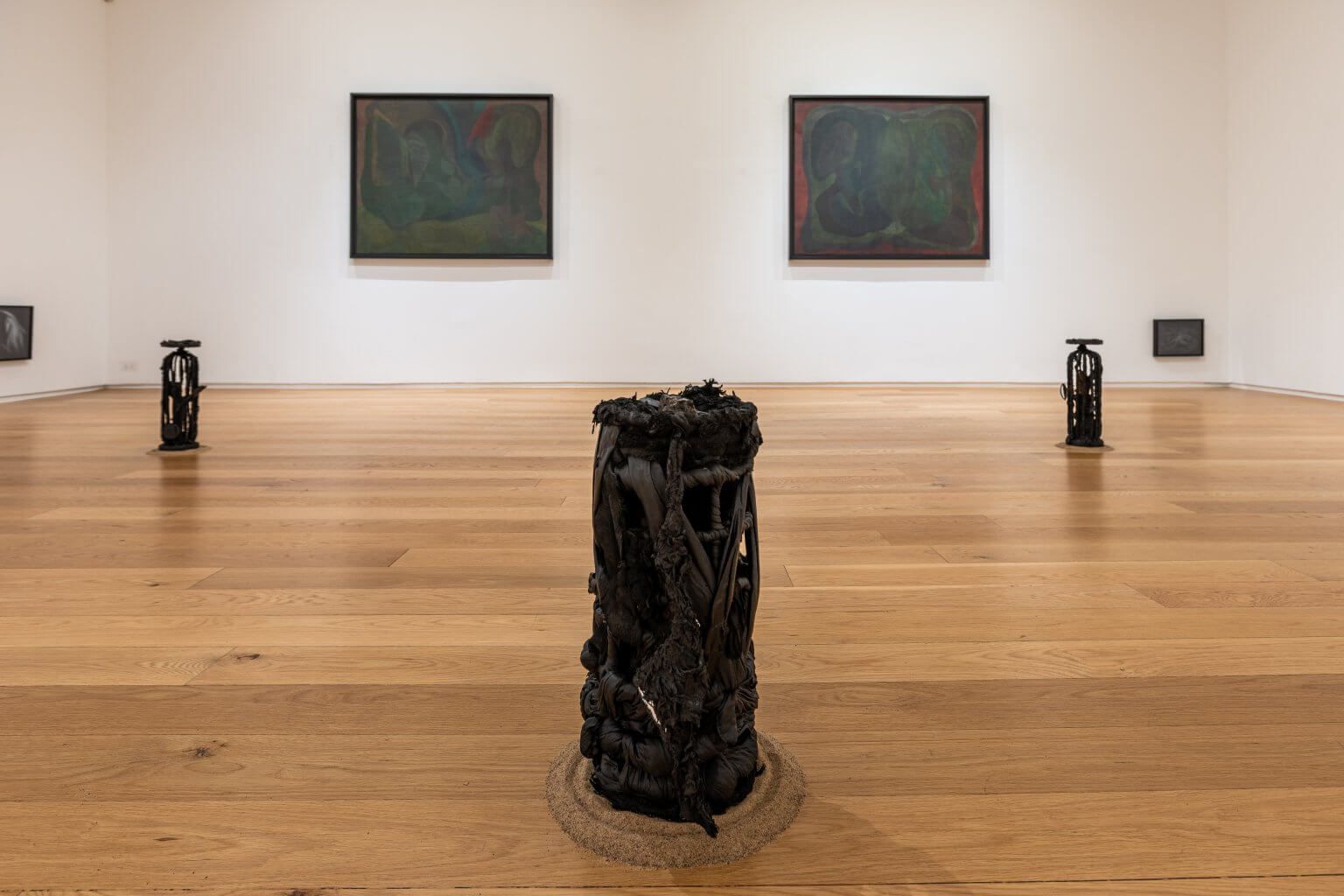 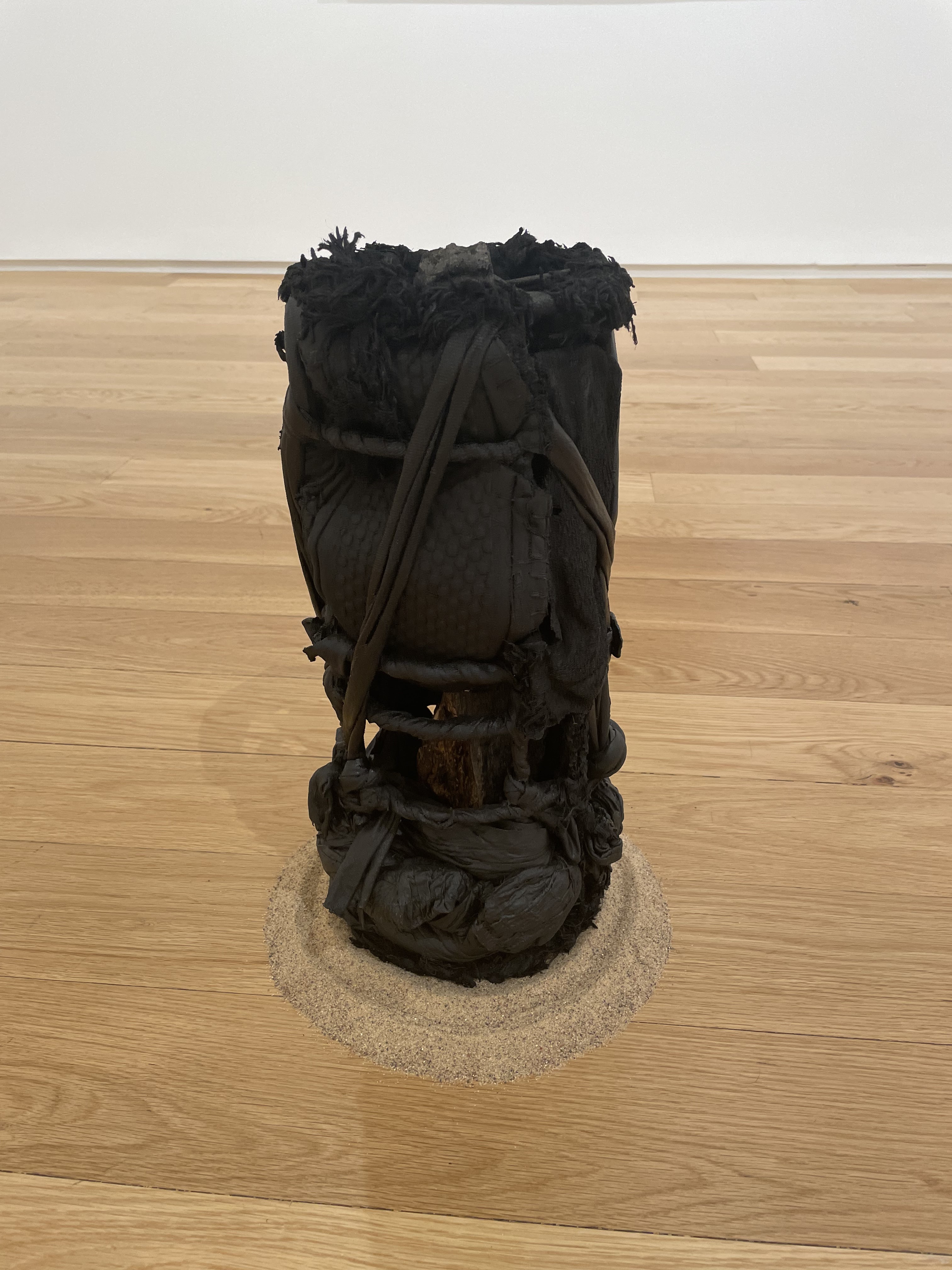 Another strong duality present in the collection of works is a sense of timelessness as the works feel both rich in history yet urgently contemporary. Standing in front of a large colored pencil drawing like Gatekeepers reminds me of sitting in a lecture hall examining Henri Rousseau’s The Dream on a large projector. The energy of lush colors and textures I was drawn to in Rousseau’s landscapes is present in Jennings’ deep, humid and vivid drawings. A series of small sculptures are dispersed around the gallery floor sitting in piles of sand, they feel as if they have been pulled right out of the drawings and placed alongside the two-dimensional works. They are extensions of their flat counterparts, proof that the world that you see before you in the artist’s drawings exists beyond their surfaces. One of the most beautiful effects an artist can have on their viewer is the ability to let them into their world, which Jennings has done at Alexander Berggruen.

By reading the accompanying exhibition text one can learn that the lantern-like sculptures are references to a West African practice of sculpture-making that dates back to the early eighteenth century called Bocio which was used as protective objects in spiritual contexts. In producing these sculptures, Jennings highlights pre-colonial African exercises in spirituality while referencing and criticizing the legacy of ‘primitive’ art in the Western canon as well as the corrupt history of looting in museology. In this way, the artist’s work is grounded deeply in history while being timely and contemporary.

Spending time in the gallery, I learned that the arrangement of Jennings’ works was a collaborative effort between the artist and the gallery staff, an important detail when considering display. Installation of the works ranges from seemingly traditional wall mountings to curiously high and oddly low hangs. The placements seem sporadic but intentional: Jennings’ duality transcends material and finds its way into the curatorial process as well. Perhaps the meaning lies not in the tension between opposing ideas but the ability to represent polarity. There is no dark without light, no good without evil… and in this way, two ideas become one: there is harmony in difference.

Angelica Maria Fuentes is a writer, curator, and art administrator based in New York City. Fuentes recently obtained her Master's in Curatorial Practice at the School of Visual Arts. Fuentes’ curatorial interests include interactive, digital, and intersectional feminist practices. Before moving to New York in 2019 she received her BA in Art History at the University of California, San Diego, and has worked for various institutions, art organizations, and businesses such as UCSD’s Visual Arts Department, The New Children’s Museum, and Contemporary Conservation in NYC. Fuentes is currently employed by UOVO, a fine art services provider in NYC with several locations nationwide.