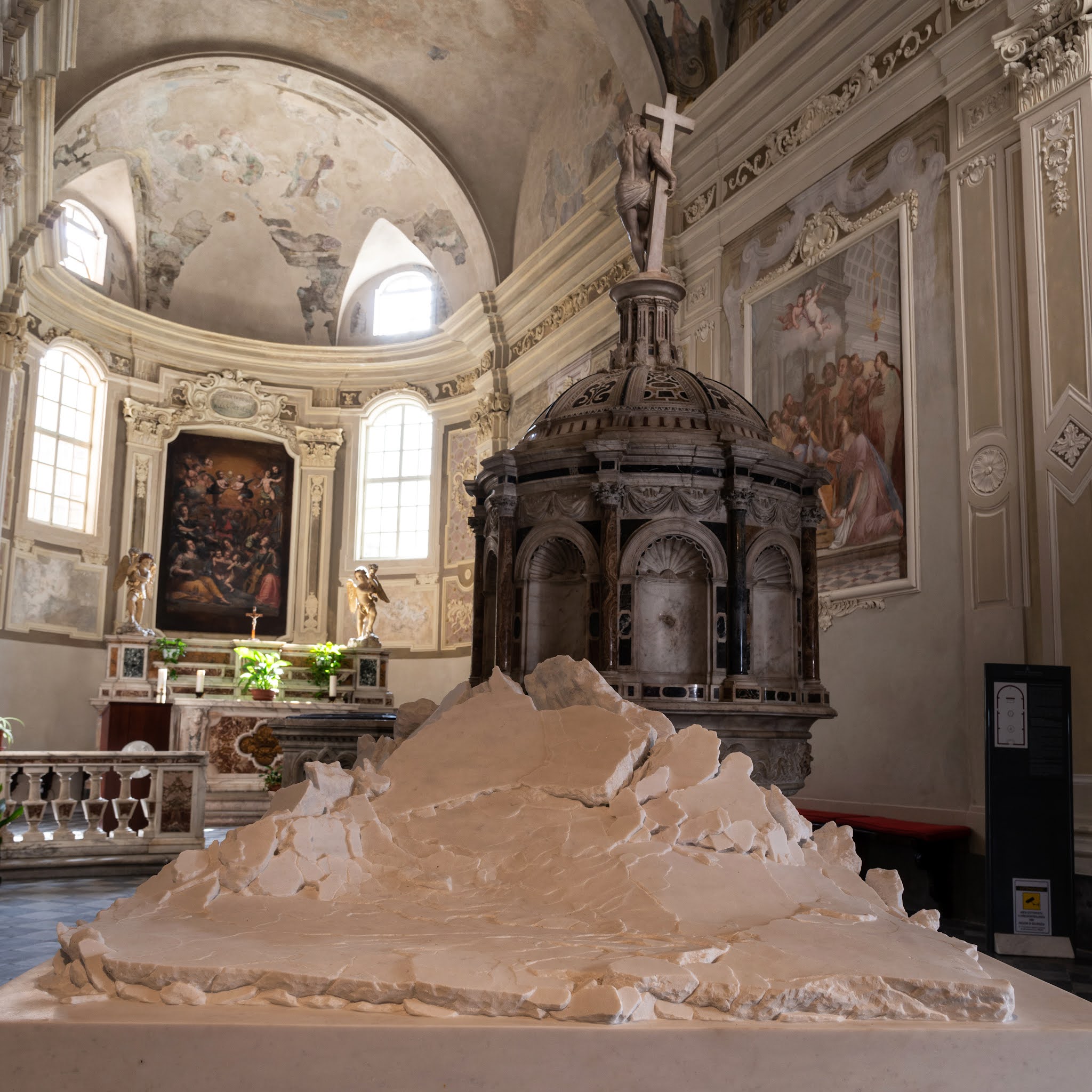 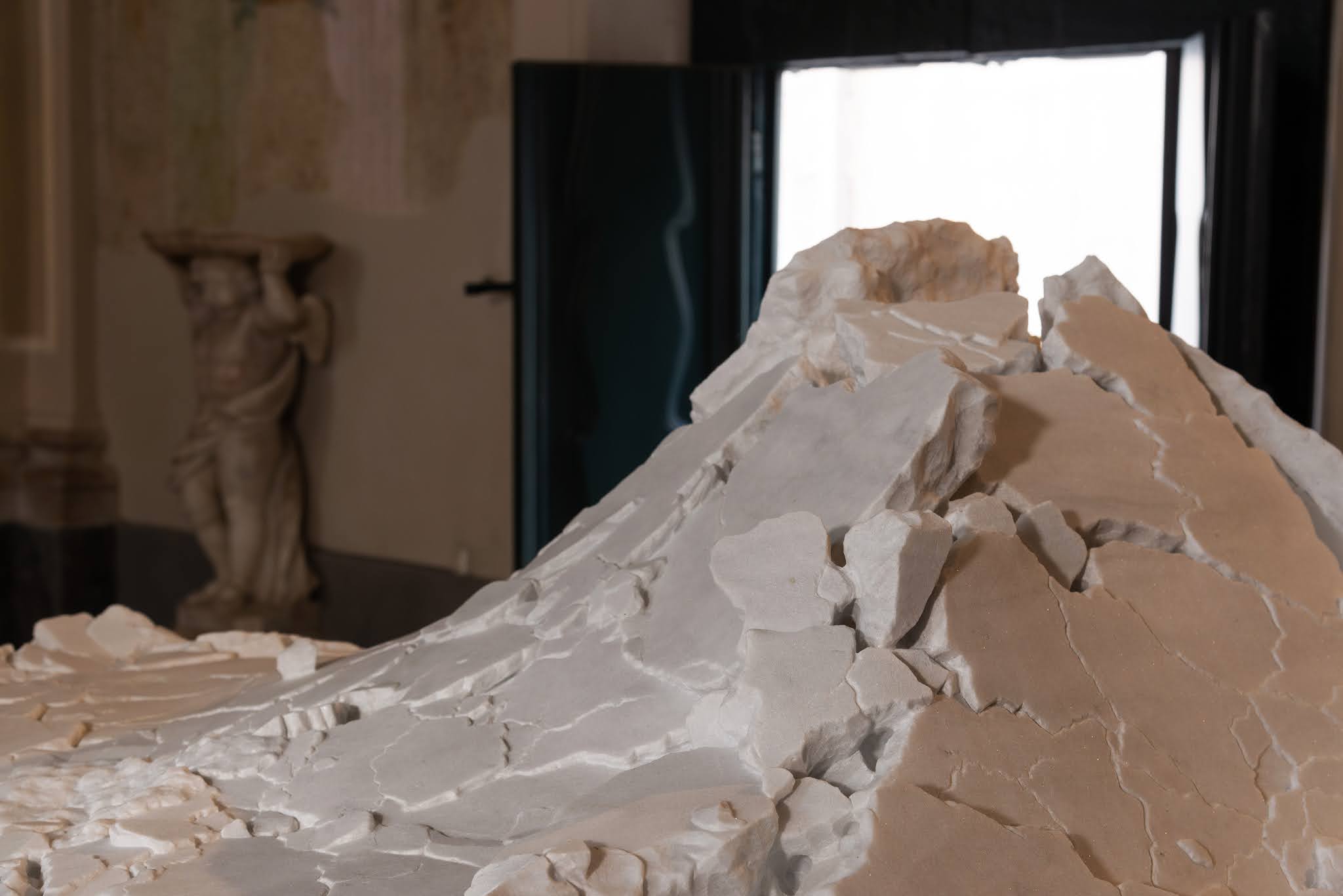 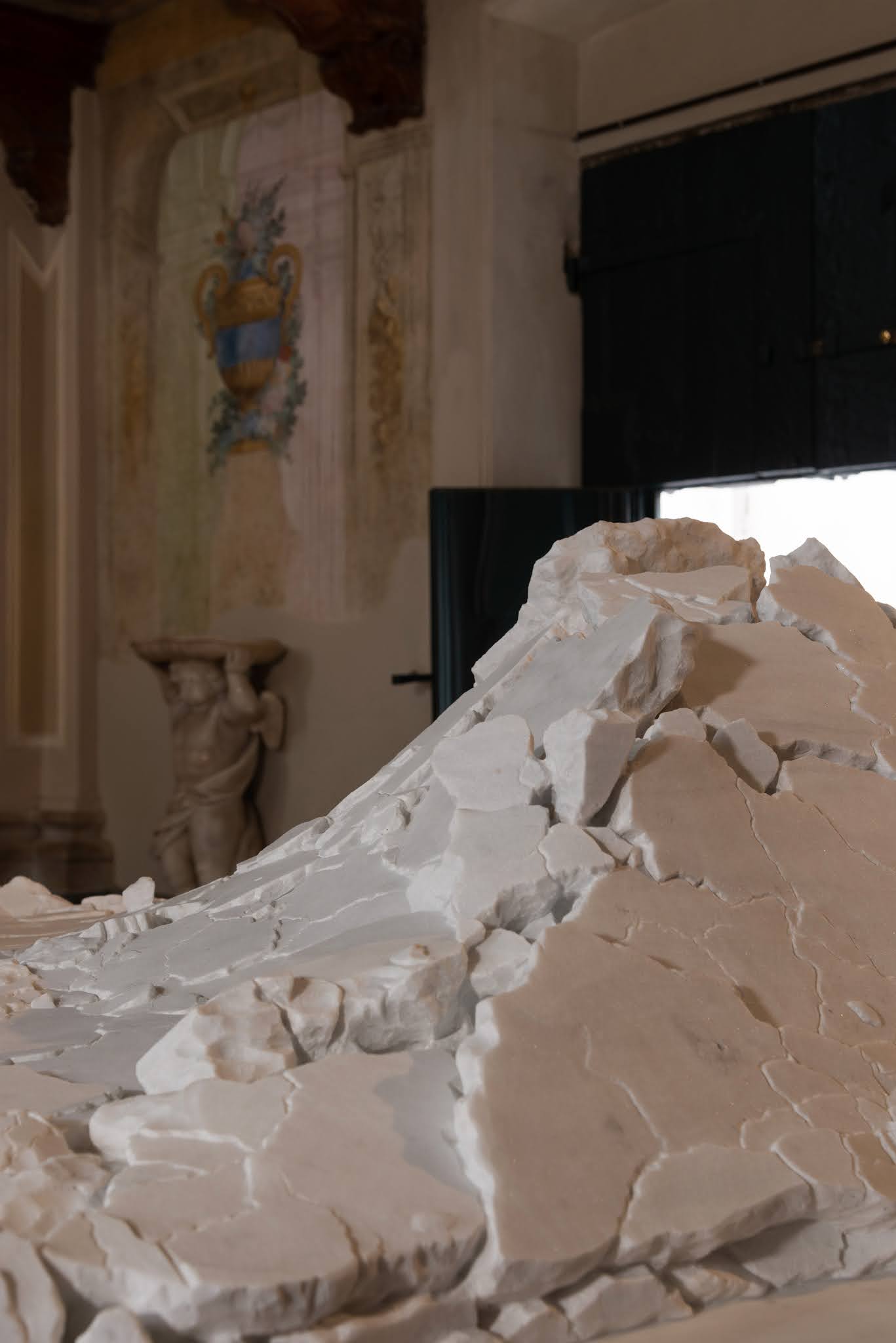 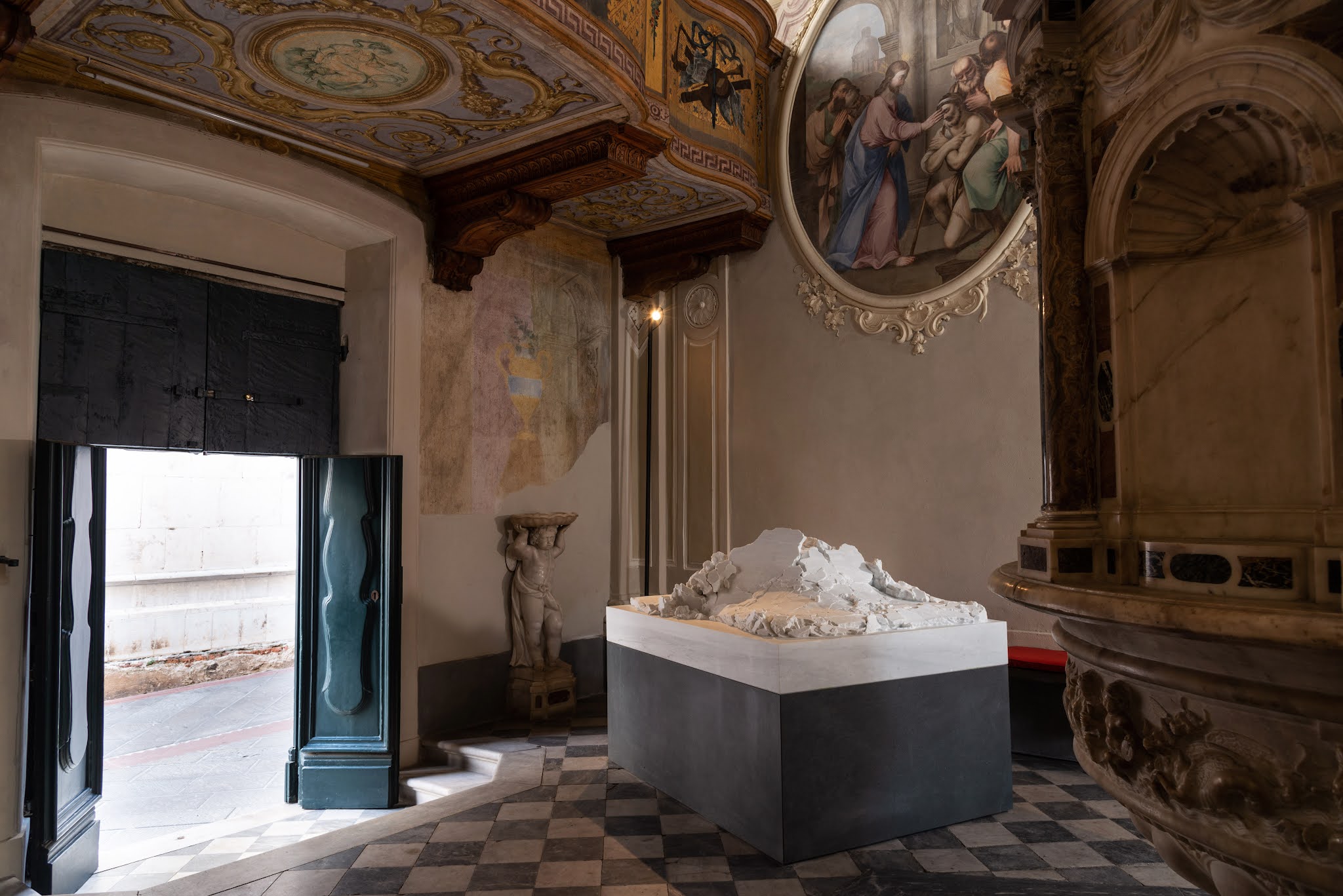 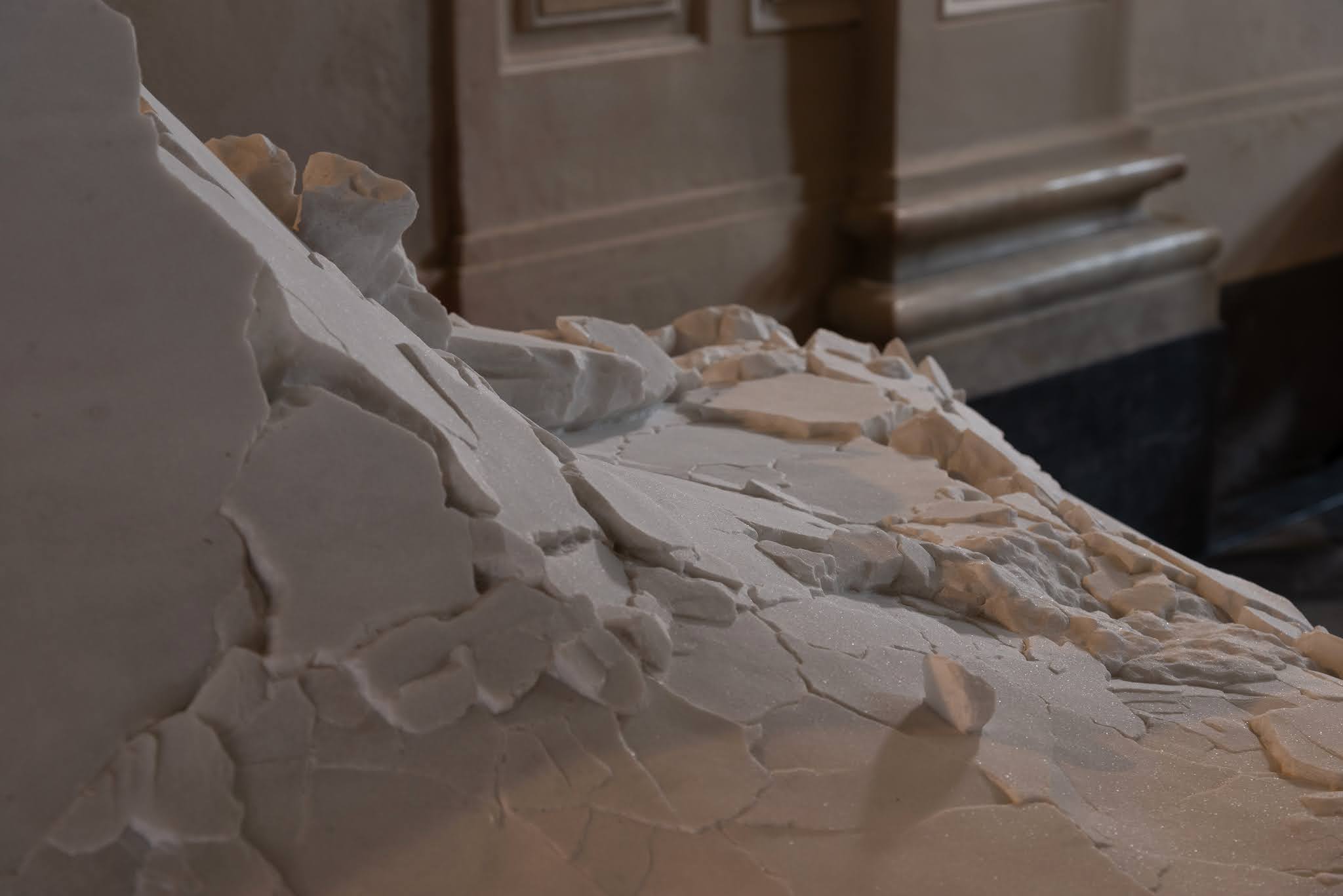 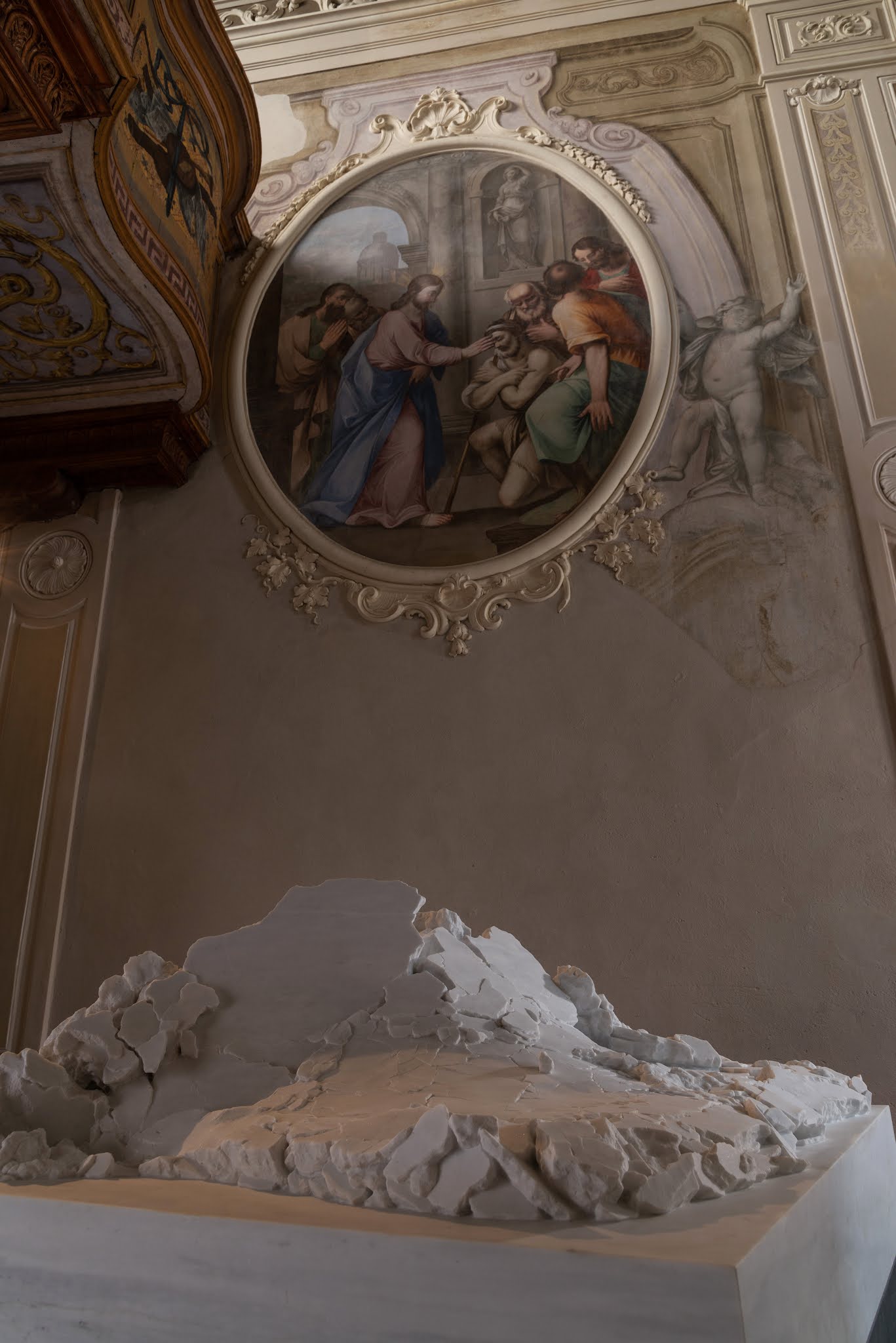 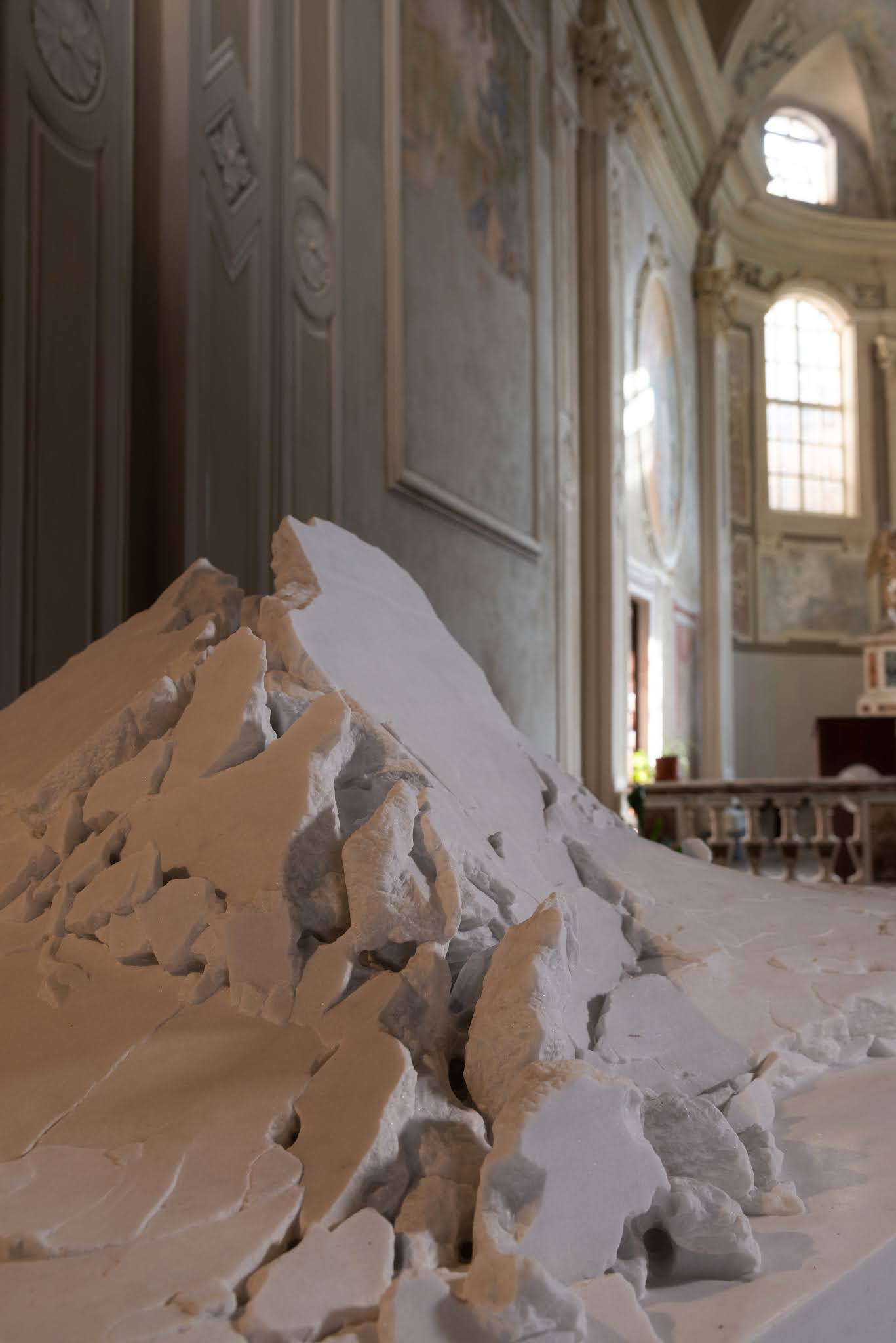 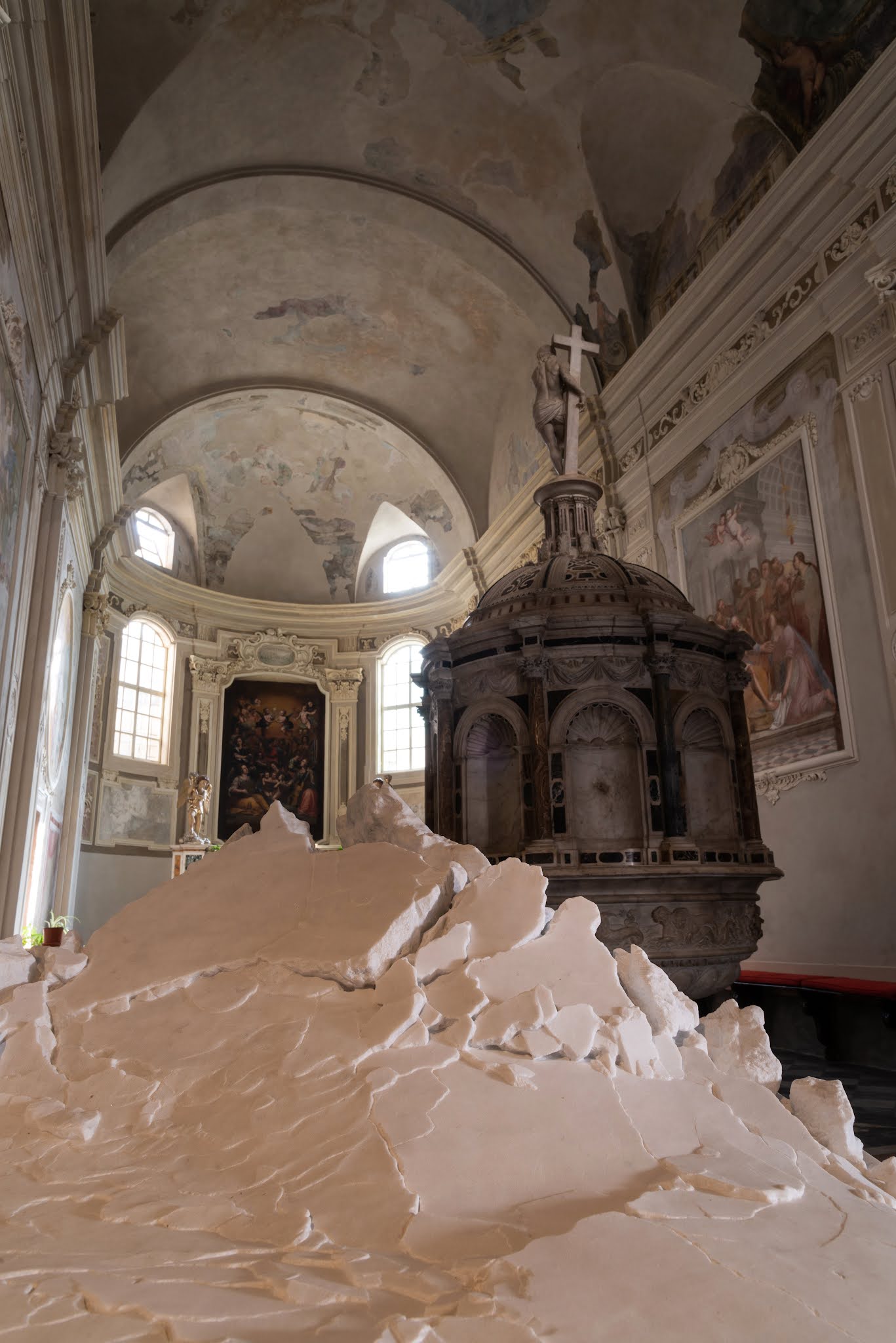 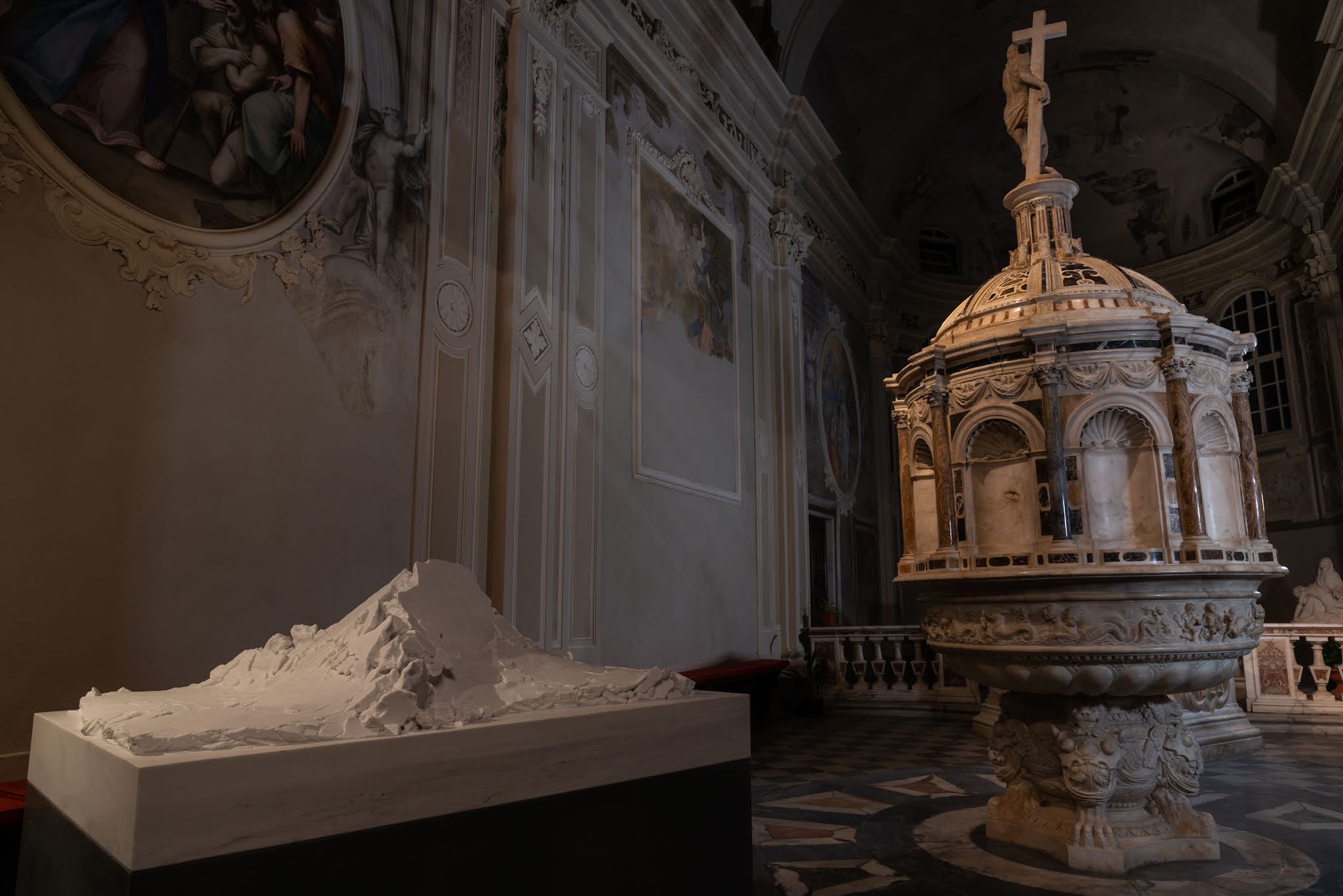 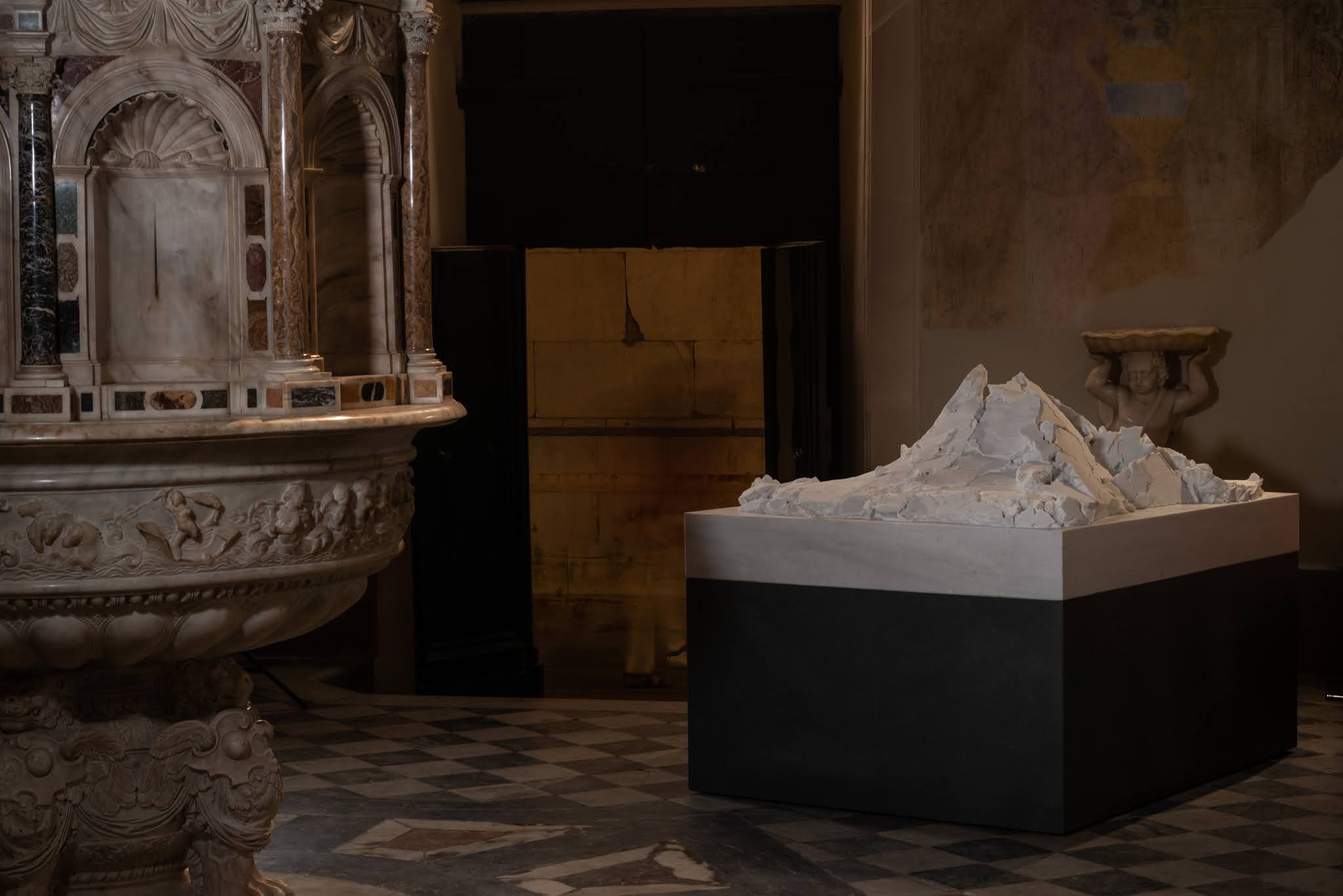 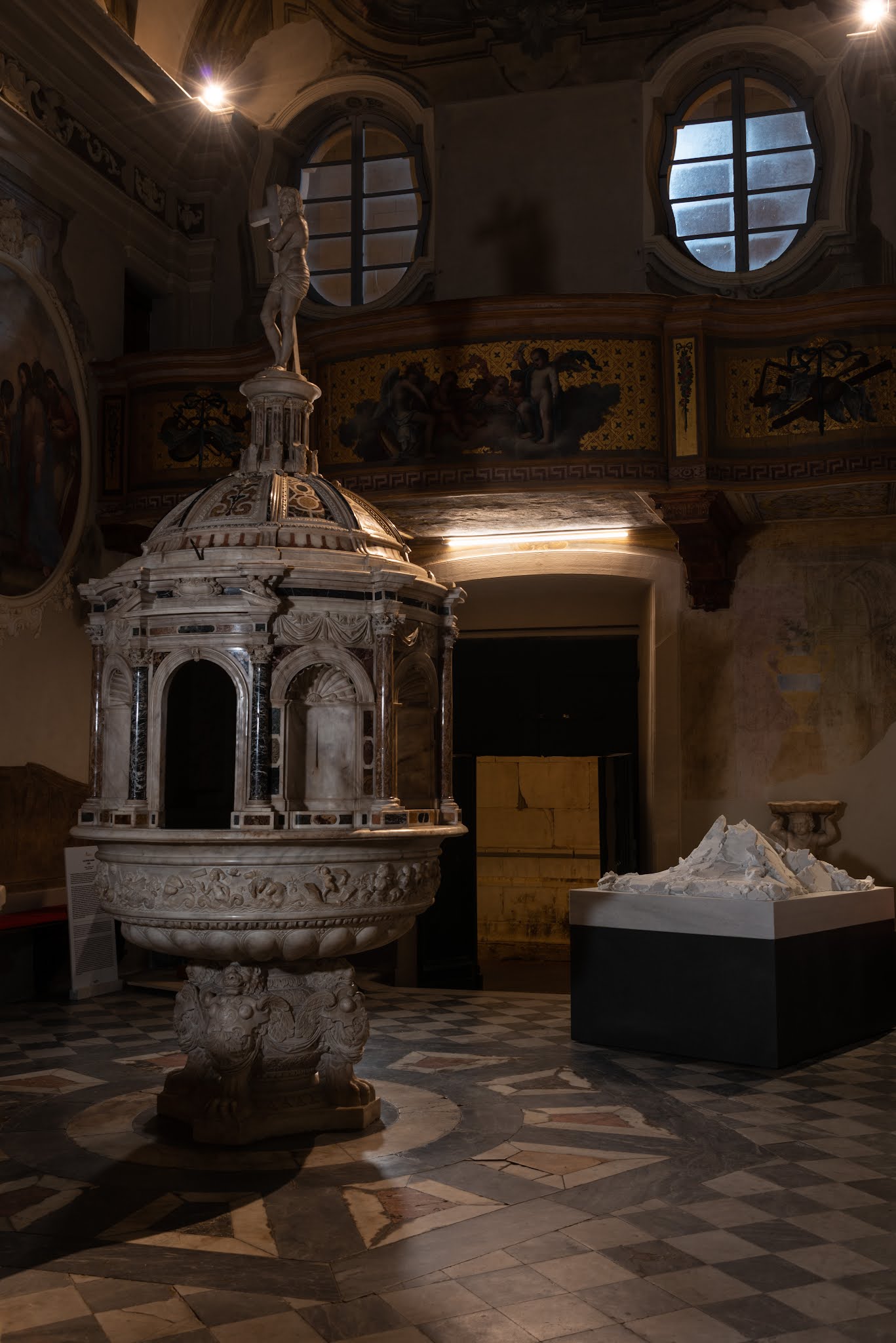 Our rendevous with contemporary art keep happening at the Baptistery of the Duomo of Pietrasanta on commission of the curator Enrico Mattei choosing, for the summer season of 2021, the artist Alda Marina Iacoianni with her art piece in marble Genesi.
The use of proposing these art meetings through the years, is not that of simply creating something out of context, but that of inserting or giving a counterpoint of the original plot of what art itself is and its transformations through time. The Baptistery is considered a small treasure chest, it was built in the 17th century, originally as the Oratory of Saint Hyacinth of Poland, and subsequently in 1786 it was transformed in Baptistery of the Collegiate Church of Saint MarWn on behalf of Leopold of Hasburg Lorraine and still to the day, it carries out its liturgic functions.

Alda Marina Iacoianni (1986) inserts an evocative value to this place of worship, that in exchange interacts with the piece of art, her research is very interesting because it belongs to a category of introspections that aren’t superfluous or hasty, but rather, so profound and informed that it requires a certain level of culture and knowledge to be able to move through the depths of the references, citations and connections that the artist brings together.

The artist looks for imperfections and the coalescence of form. This is one of the cardinal reasons why the “splitting” is conceived as a starting ritual, before gaining its shape, the desire to come into contact with the raw material mixed with the unpredictability of the incontrollable and random development of piece of art. The Splitting isn’t seen as a wound but as a crevice that becomes a concrete mark of vitality, the part that generates the inner ma<er and connects.

Her sculpture is a message of love and of positive energy. It shows us in full light, and in its full sensuality, the truth laid bare by discovery of its original organic belonging to the timeless dynamics of the universe. The art piece isn’t limited by its shape, but rather its goal is to overpower it, entering into a direct relationship with the observer, the piece poses in an interrogative light. An imperfect geometry where the crevices gives the piece a pulsating liveness, and the most utilised elements found are soft and strict shapes. The integration between soft and strict gives birth to a new spacial concept that no longer derives from the initial two. The sculpture gives a spacial expansion above and beyond, reconnecting to hope, desires and to the project that man himself has in finding the right balance between opposite poles.

The piece is articulated by a first degree of randomness towards the splitting of the used material, the action itself anticipates the creative process and permits the artist to reinvent each time; dexterity becomes an indispensable tool from the start of the process and then disappears thanks to use of new technology. The use of a mechanical means brings into the art work a deep fusion between an ideal culture and the raw material itself, the artist becomes philosopher, designer and executor. The great illusion of man is that of waiting to answer those enigmas that have never been solved.