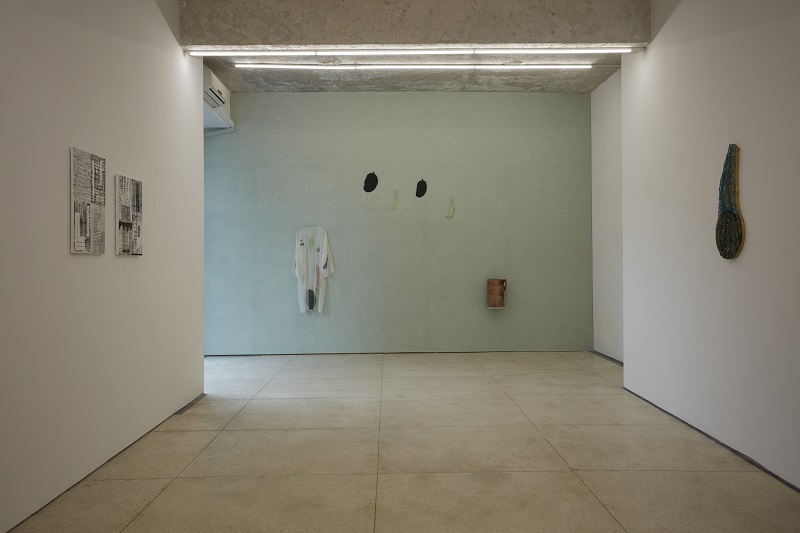 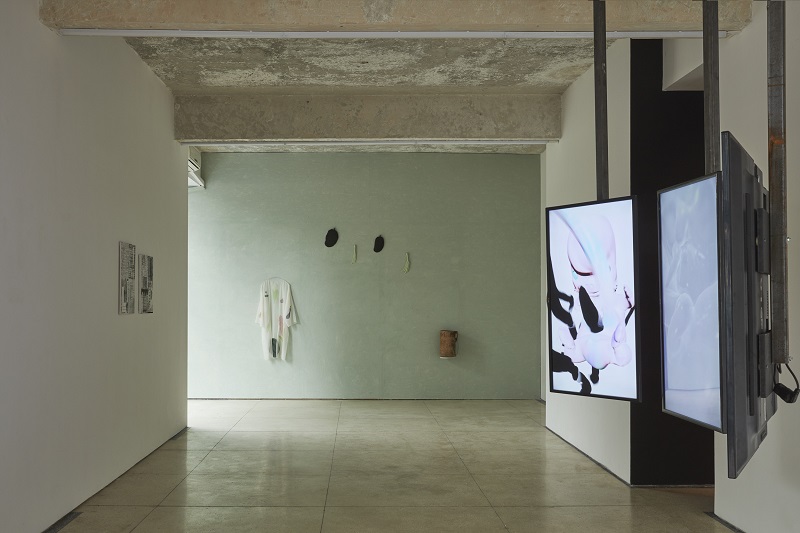 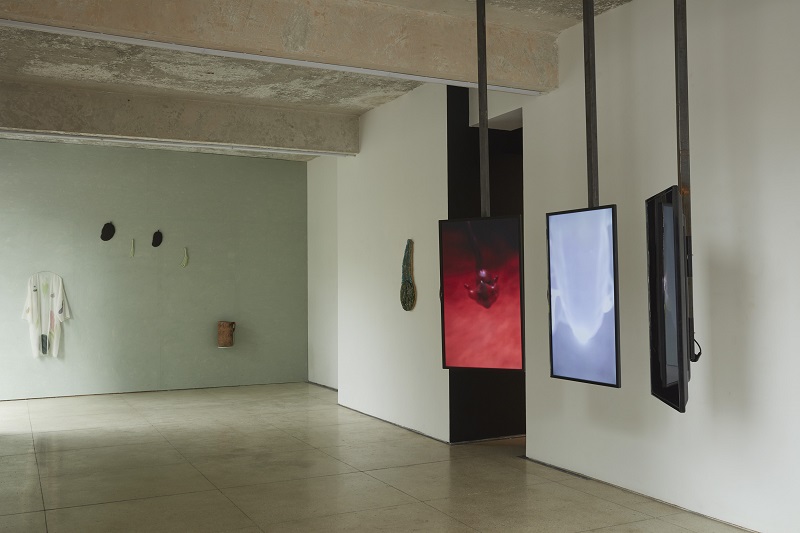 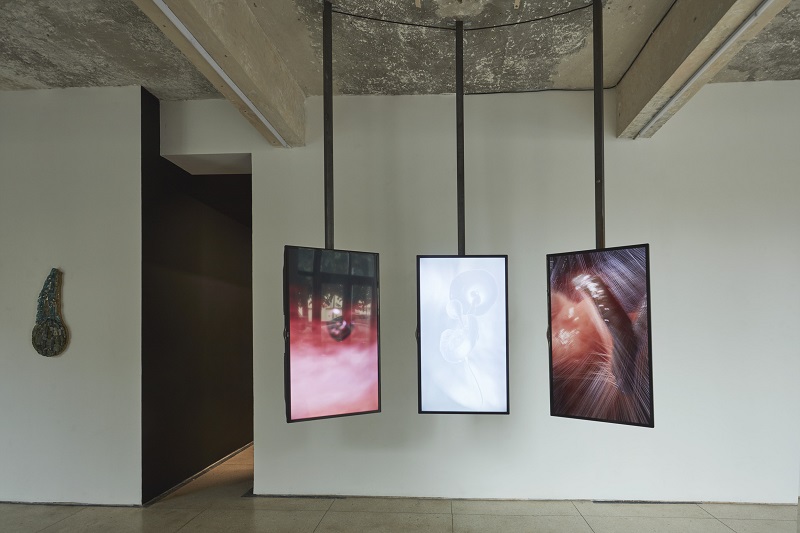 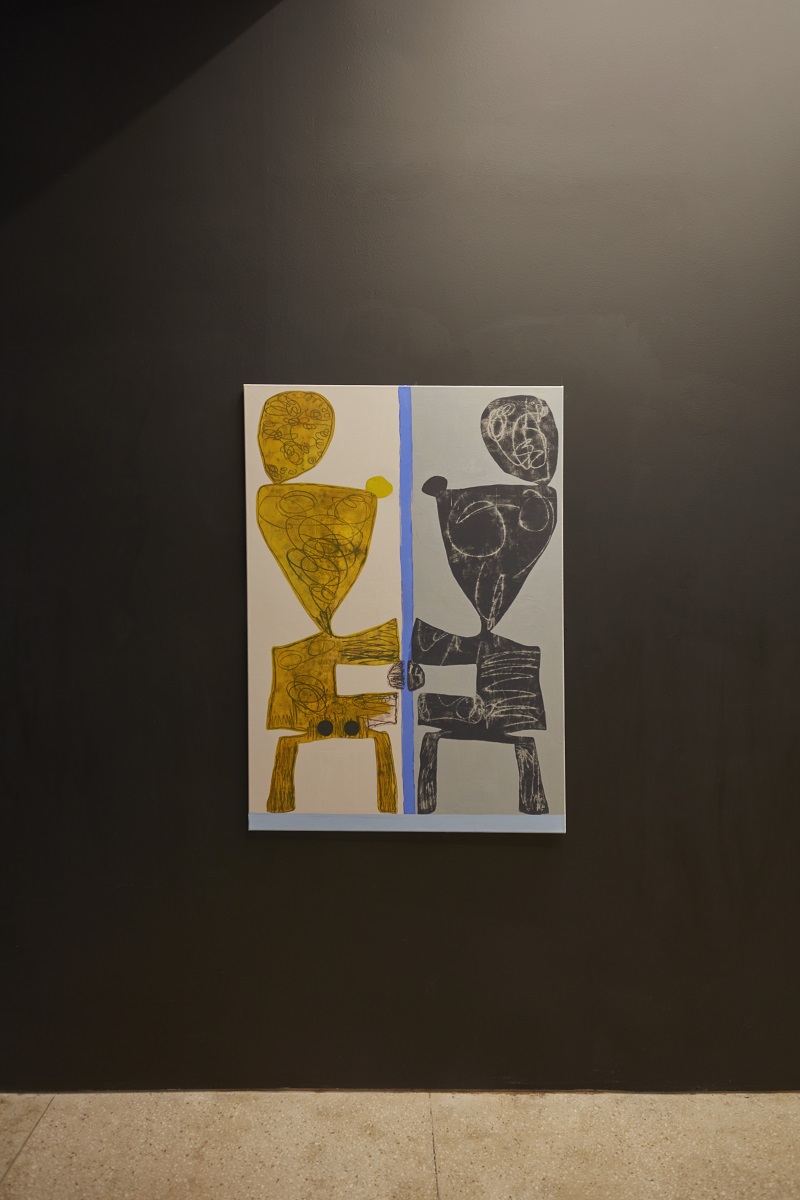 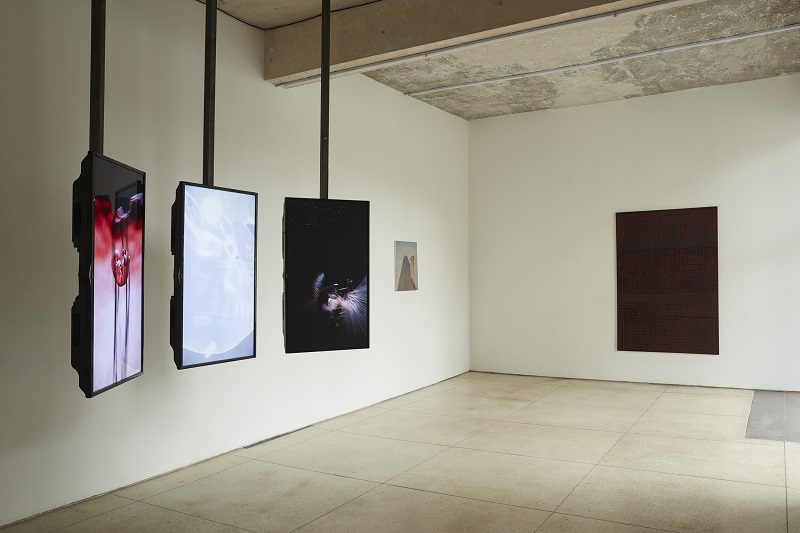 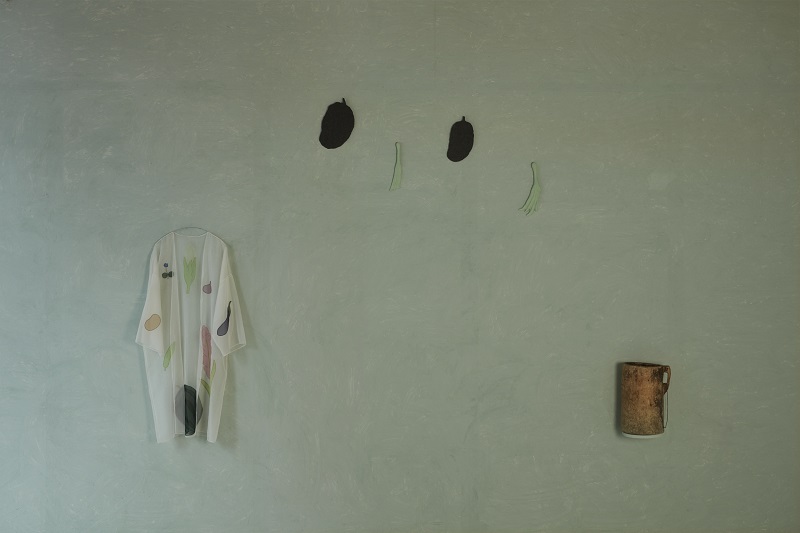 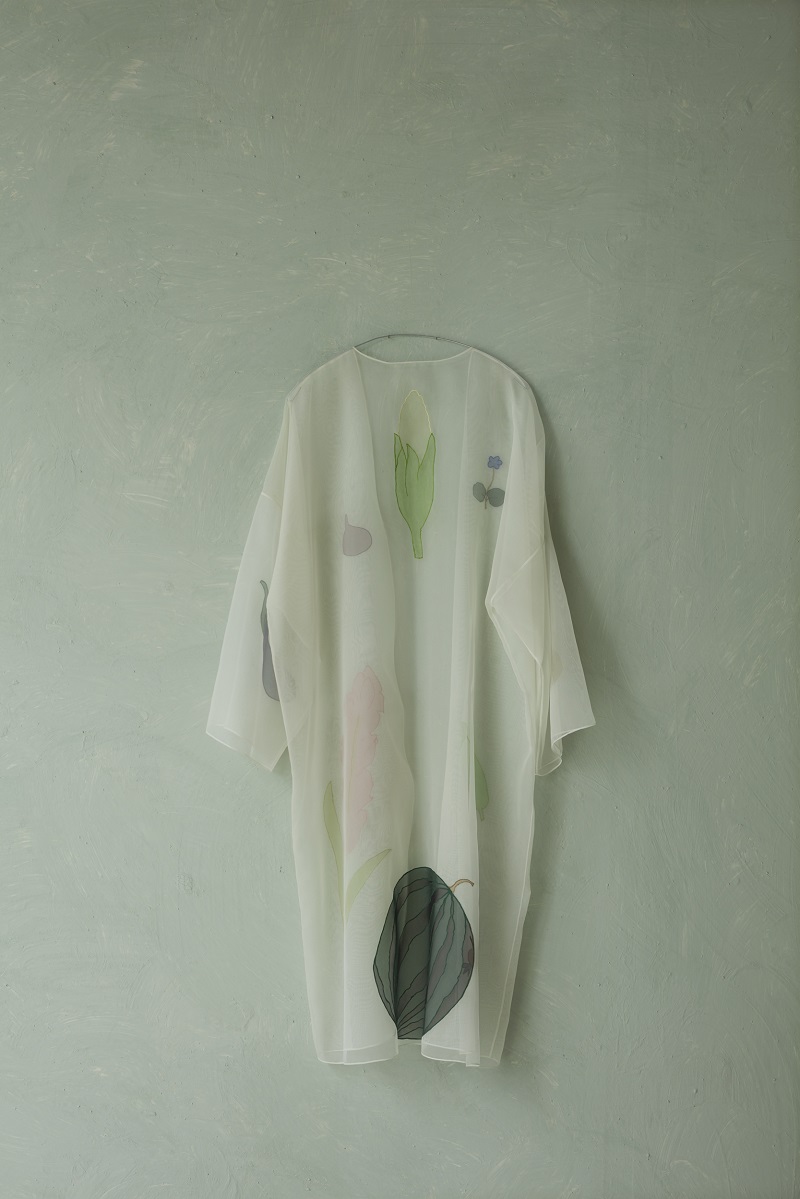 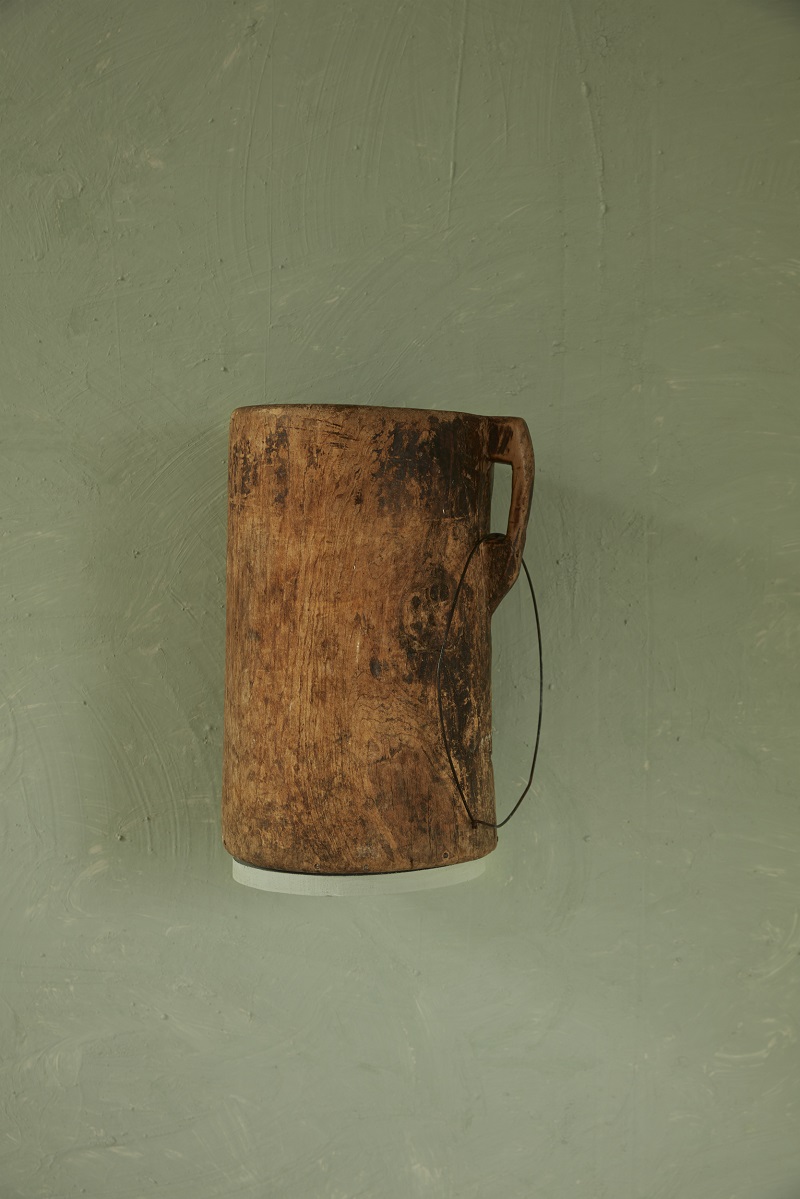 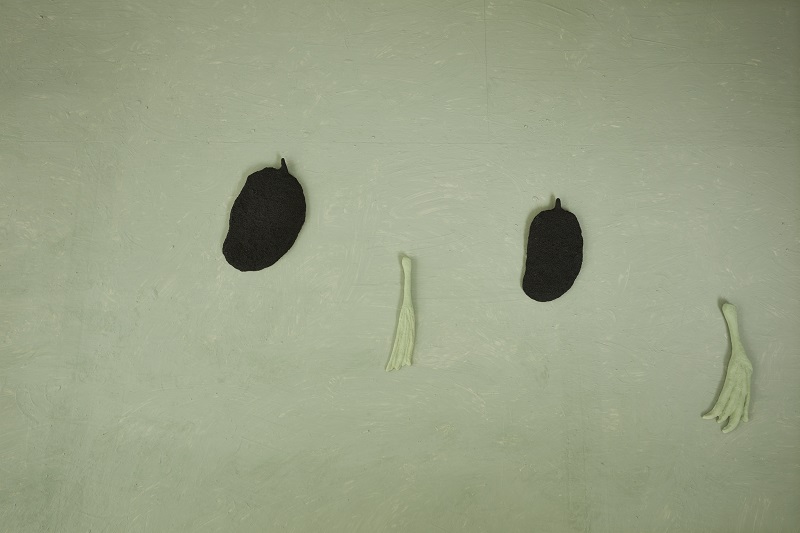 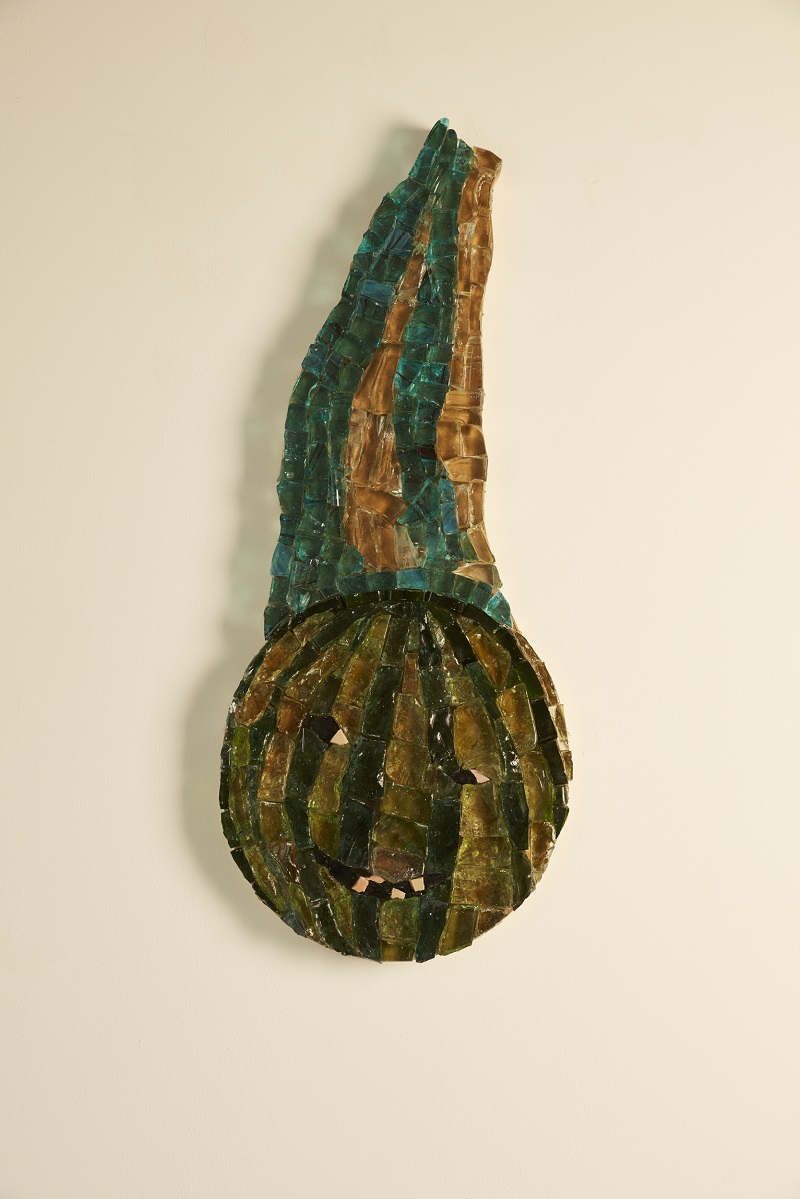 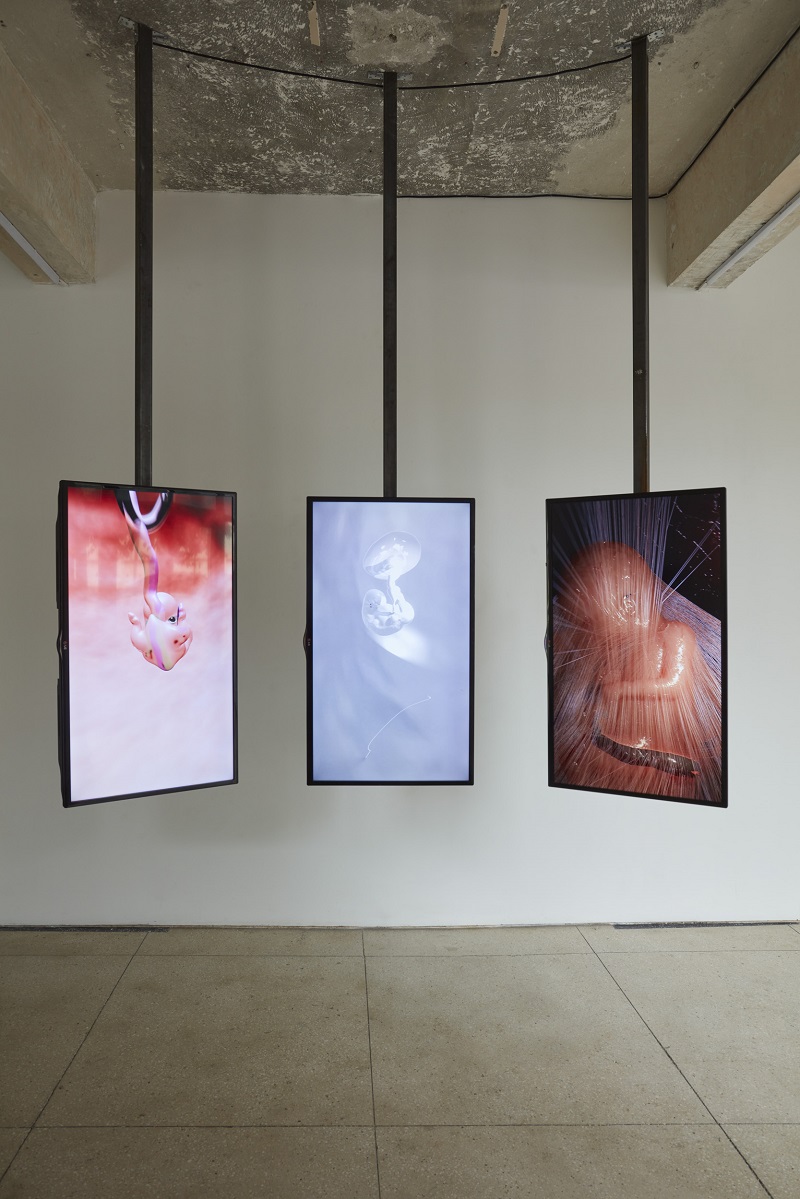 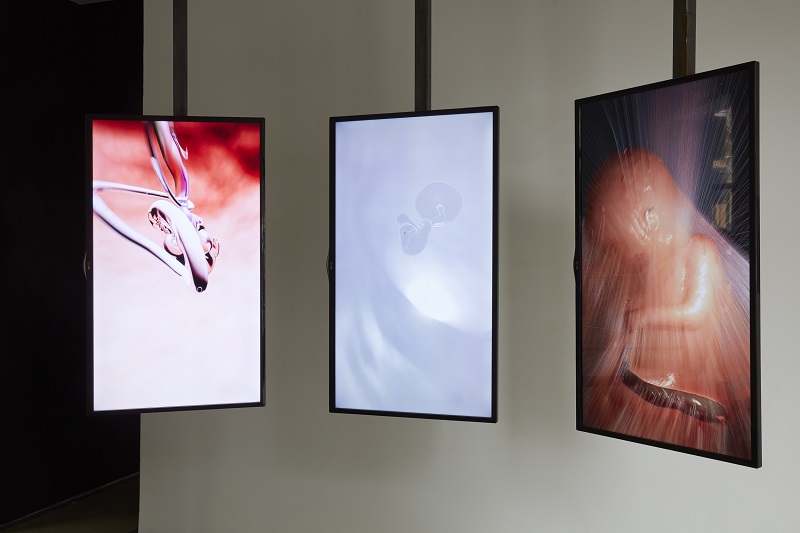 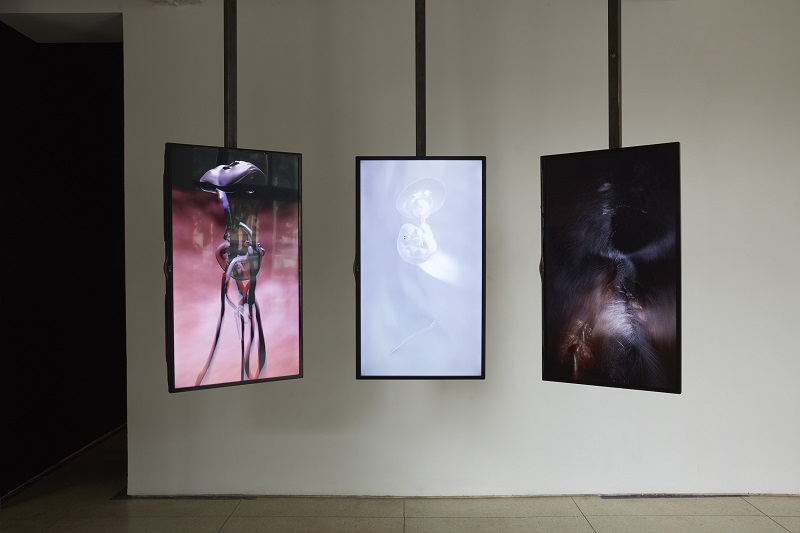 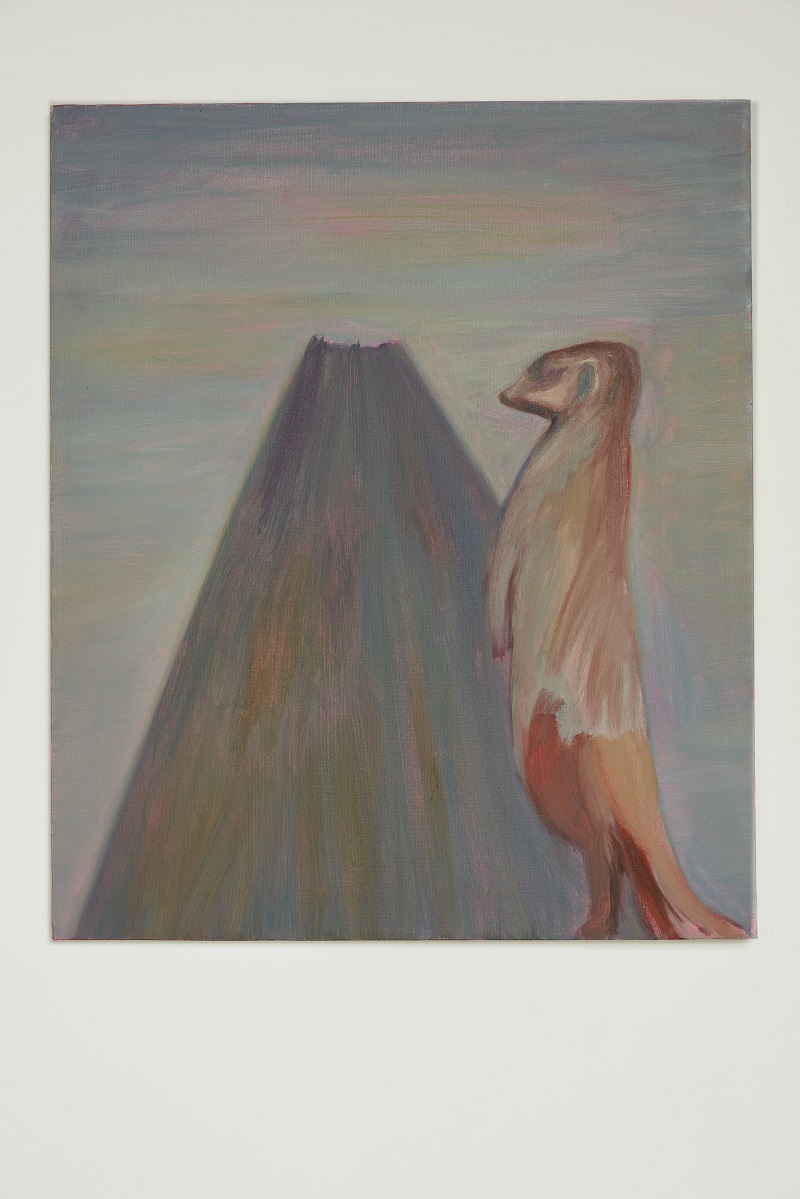 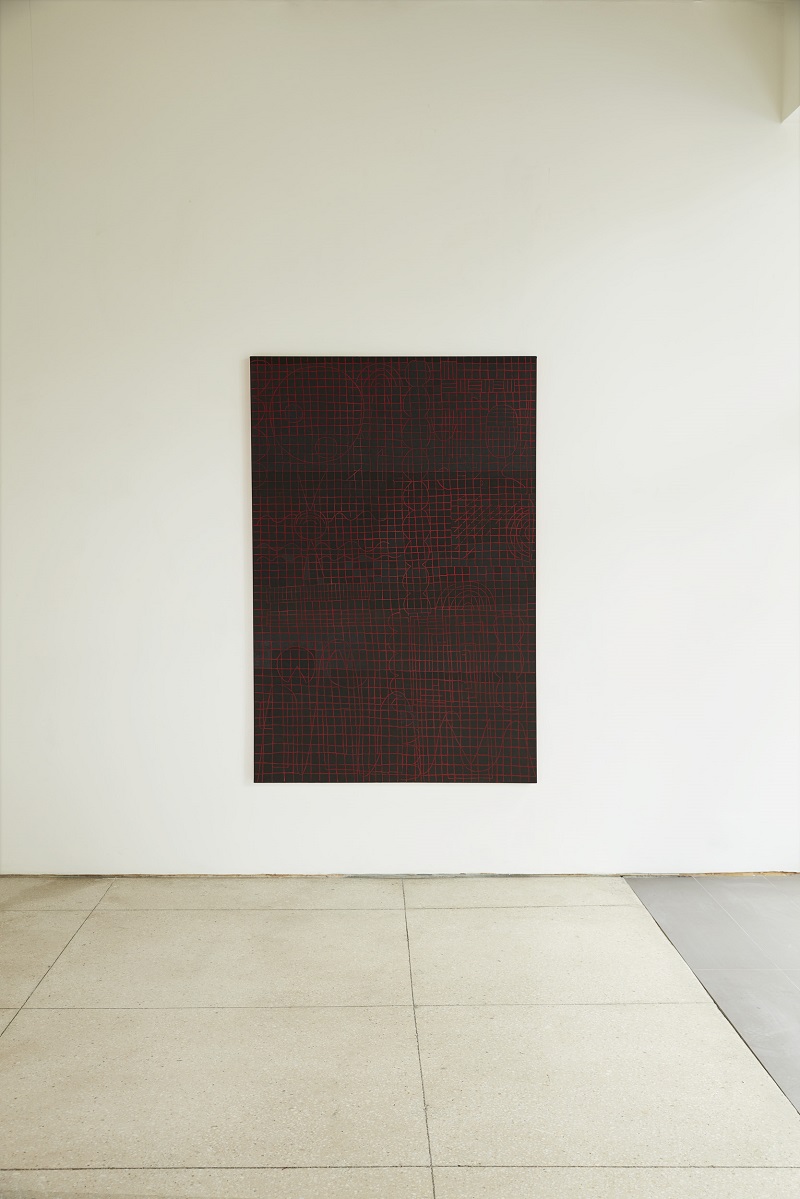 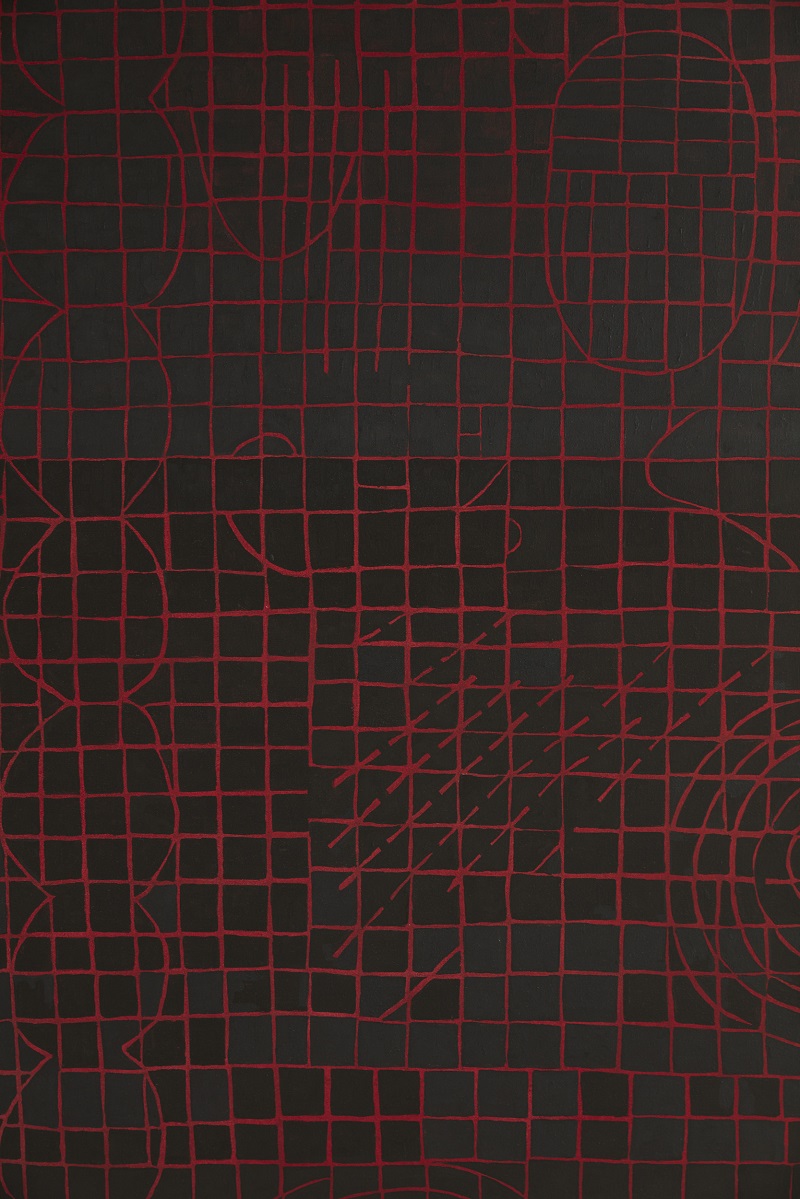 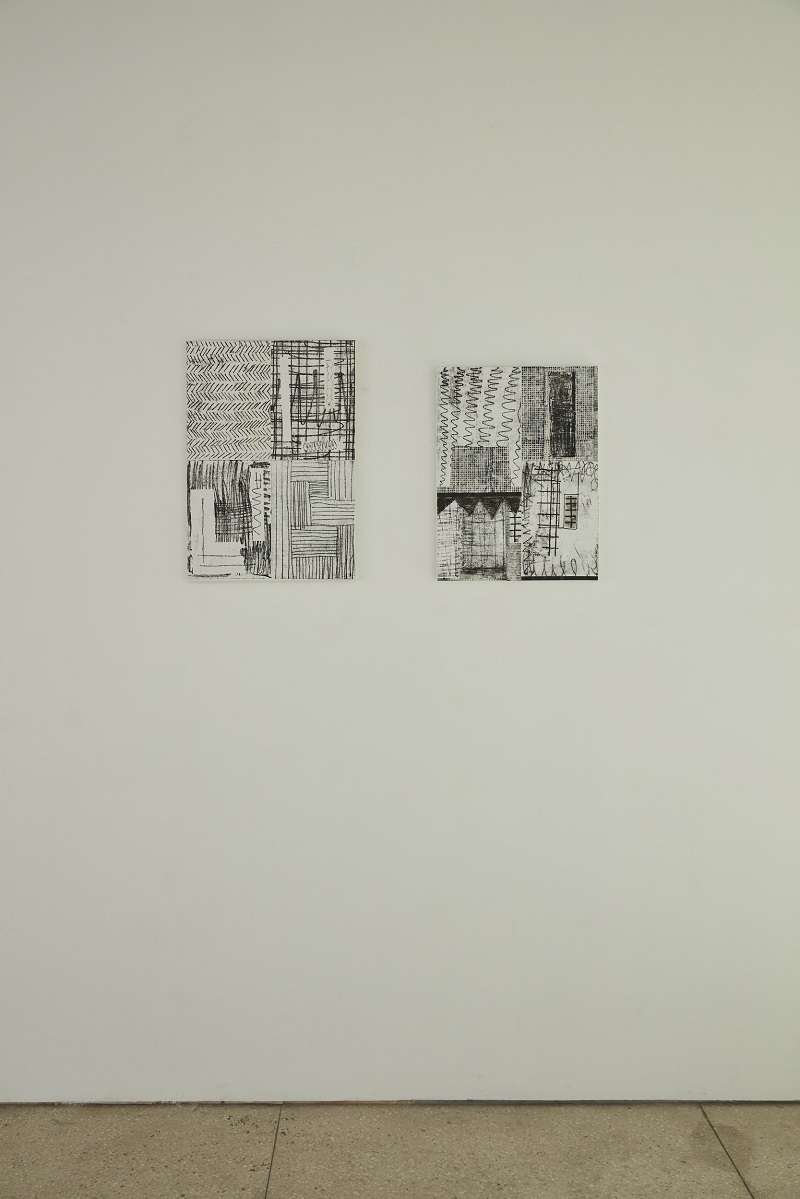 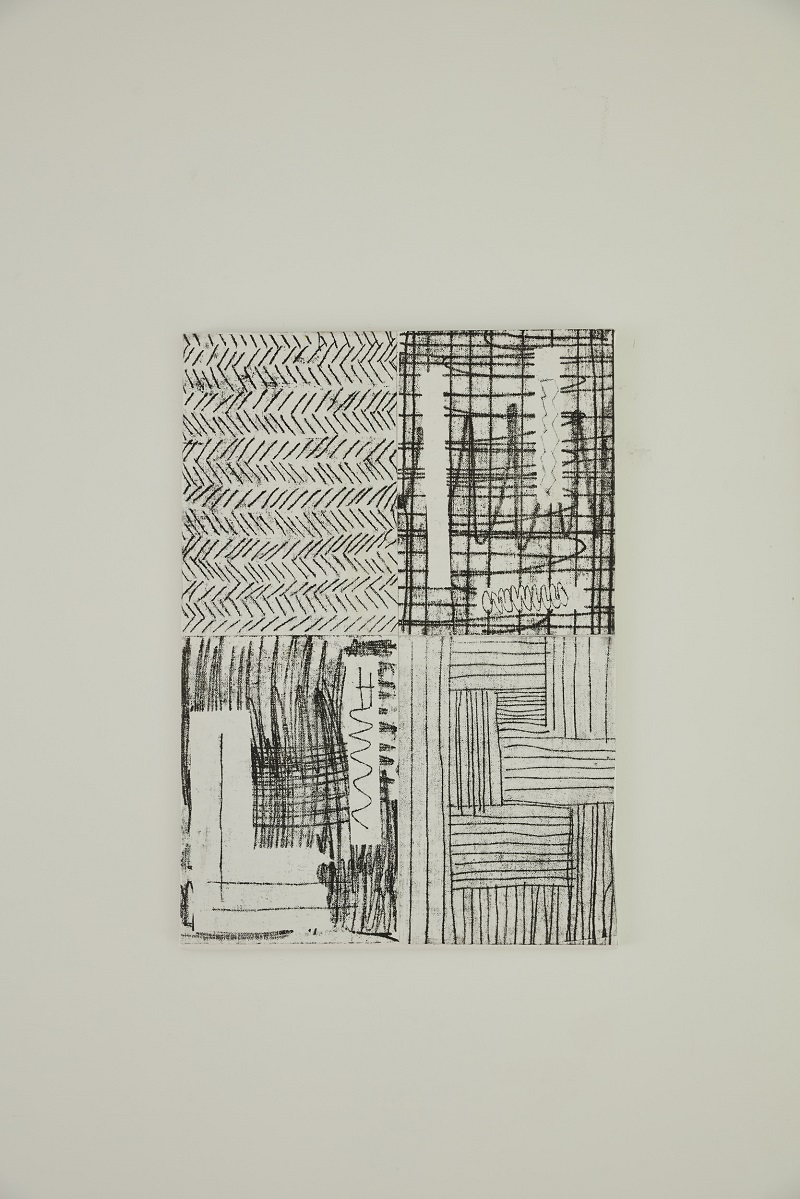 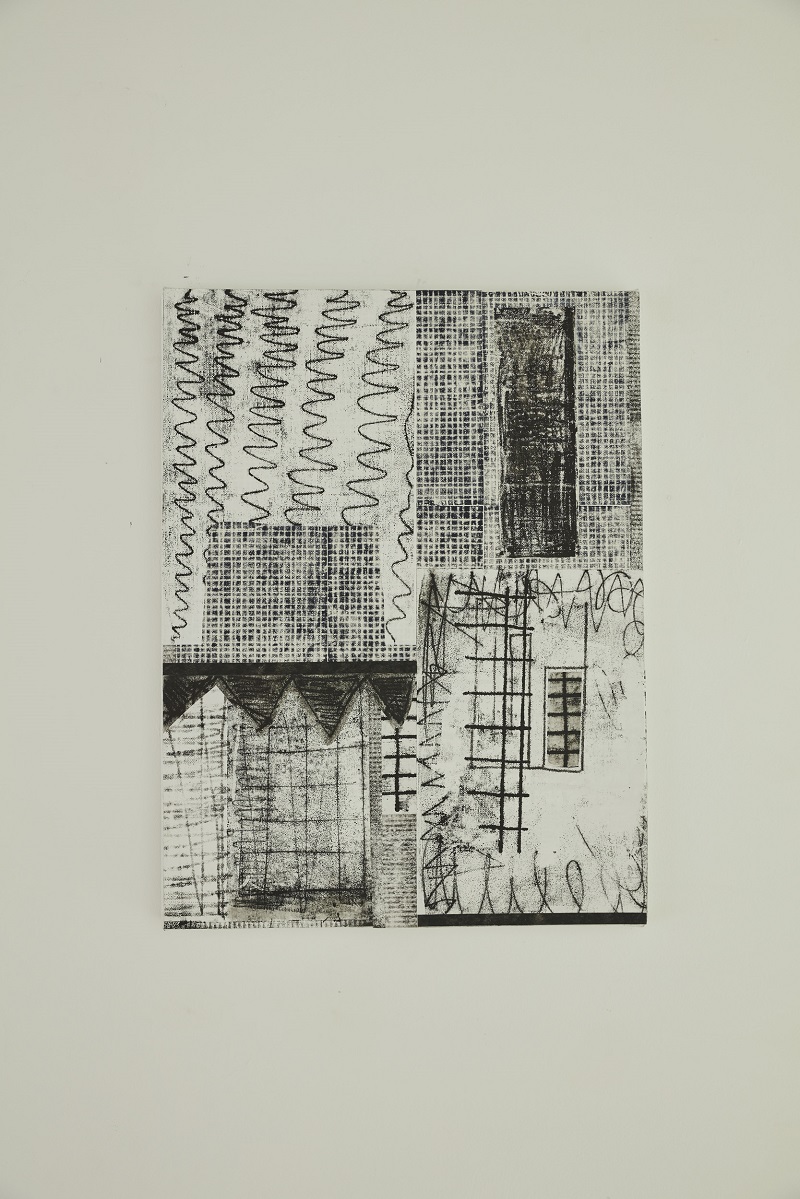 At the bottom of the coffee cup, future(s) and past(s) are interpreted through certain symbols that are shaped while turning the coffee cup upside down. The mountain and the meerkat, leveling each other out, is a metaphor for a symbol that appeared in Thea’s coffee cup years ago. In 2007, inhabited by a geographical nostalgia the artist did a series of small, fugitive works named future telling paintings. It is told that in Batumi, Western Georgia, people turn the coffee cups they drink daily, it became almost a ritual, a way of connecting to the near future by reading symbols in the coffee cup. The animal that stands in Future telling, facing the open mountain, in a seemingly obsolete and mysterious landscape, translates the observation of one’s destiny that is yet to unfold.

In Georgia, the Khvamli or Khomli mountain has several historical caves, one in which Prometheus, the titan god of fire, was punished.

Maria Schumacher’s large black and red painting creates a cavernous space or a fragment of a more figurative Tetris game. She made it during the pandemic, where the symbol of the cave chameleonically unearthed itself in many domestic environments. The ludic and split lines of the painting, the Brâncusian shapes that almost exceed the red grid of the canvas, the organic and uncontrolled contours permeate the everyday breathing, body movement, and synchronization during paralyzed times.

In Tzusoo’s Schrödinger’s Baby video work, the concomitant possibility of space both digital and physical is interrogated through the artist’s own female identity and her inner grappling with the potential of motherhood. Similar to Schrodinger’s cat experiment, whereby a cat entered a state of superposition (being alive and dead at the same time), the artist poses the question of whether the digital world could absorb the fixed entities of our physical bodies. Her desire as a woman to have babies has always been interrupted by confinements that float around. And yet, identity, skin colour, health issues, marital status, social status, are no parameters in the digital realm.

A bear called Ung-nyô appears in the Korean creation myth called Tang-gun. In order to become human, the bear carries out the mission of living on only mugwort and garlic for one hundred days inside a cave. The tiger is unable to last one hundred days, but the bear is able to endure it. The bear becomes human and marries a god’s son, who descends from the sky, and gives birth to a son. Then she disappears from the myth. In Korean mythology, women disappear after they give birth to sons. They never appear again. The ultimate goal of their existence is to give birth to sons. (Kim Hyesoon part of Documenta 14)

Inorganic umbilical cords hang from the ceiling as if the artwork becomes the baby, and the screen its skin. The human realm is however intertwined here through the sound of the video coming out of the artist’s belly and heart. If digital surrogate motherhood existed, how would then the human responsibilities change and expand?

Falling star, the abstract embodiment of a Georgian elderly woman as watermelon, is pieced together with soviet glass, smalta called in Russian, used in the past for mosaic murals. Despite the still patriarchal impression of the Georgian culture, the woman identity is symbolically strong, and together with nature, they are recurrent elements in Thea’s work. In this mosaic, there is pain and beauty, mourning and living. And not only concerning human nature but also for nature itself. The gown hanging on a headless hanger assembles flowers, vegetables, and fruits, mirrored by two mulberries and spring onions, as well as an 18th-century wooden vessel originally from Khvamli. This trinity is an hommage to nature, culture, and history, and universal female intuition, said the artist while sitting on the bench across the gallery space.

Thea’s work also highlights the collective trauma and environmental impact of the enduring crimes of colonization or neoliberalism. Resisting herself the extractivist industry in Georgia, especially the current plan of the largest hydroelectric power station in the gorge of the Rioni River in Western Georgia, the artist precisely returns to the environment in her practice to underline the ancestral knowledge of nature and the cosmological and geological look into decolonized futures.

As the exhibition space follows the conch shell shape, Never Ending Ending opens up a portal for hybrid identities that perform, on the canvas, alternative constructions of femininity and masculinity. The lines and colours flow together in the fiction of real life.

THE CONCH SHELL is an exhibition produced in partnership with Goethe-Institut Bucharest.