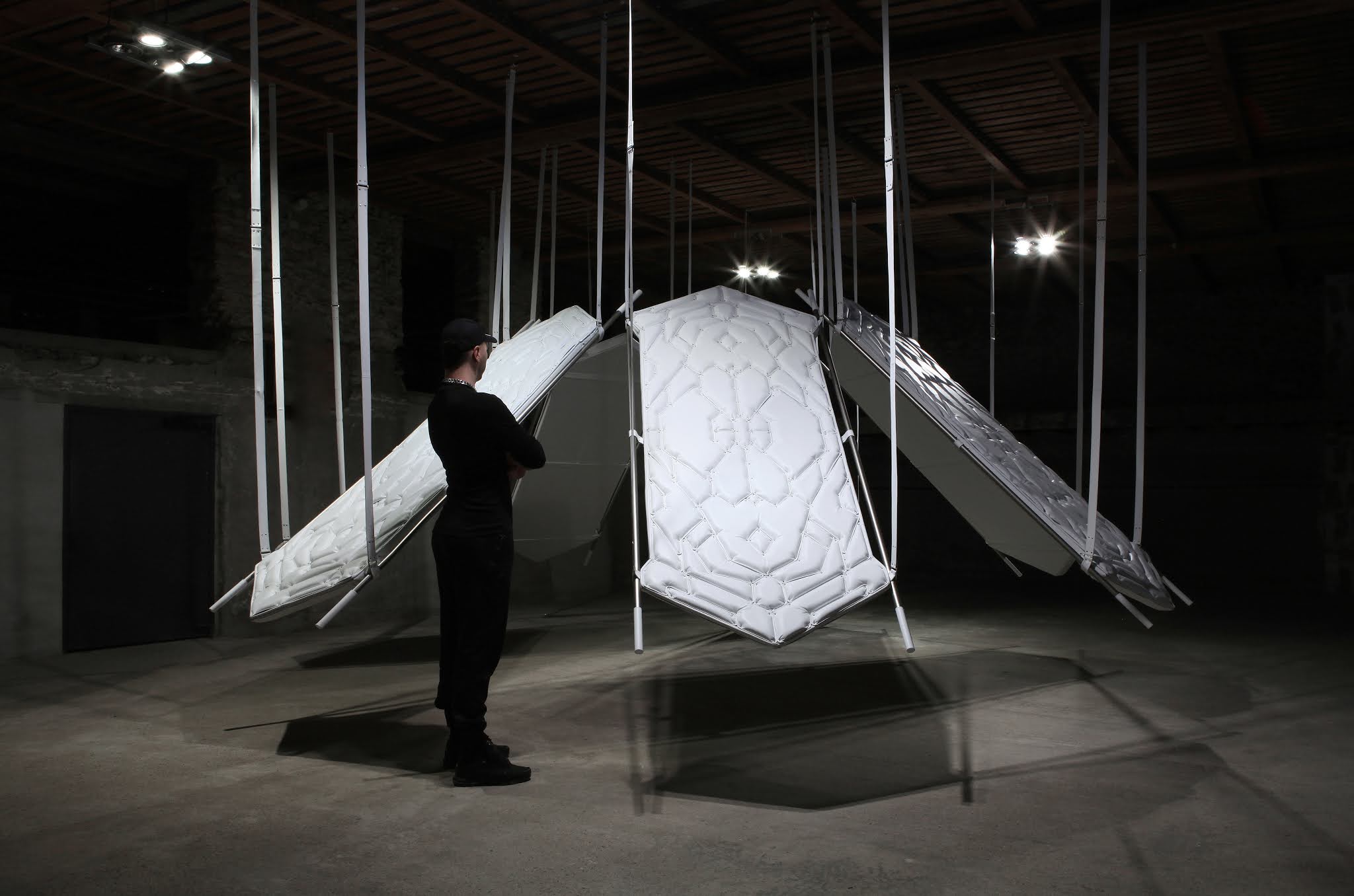 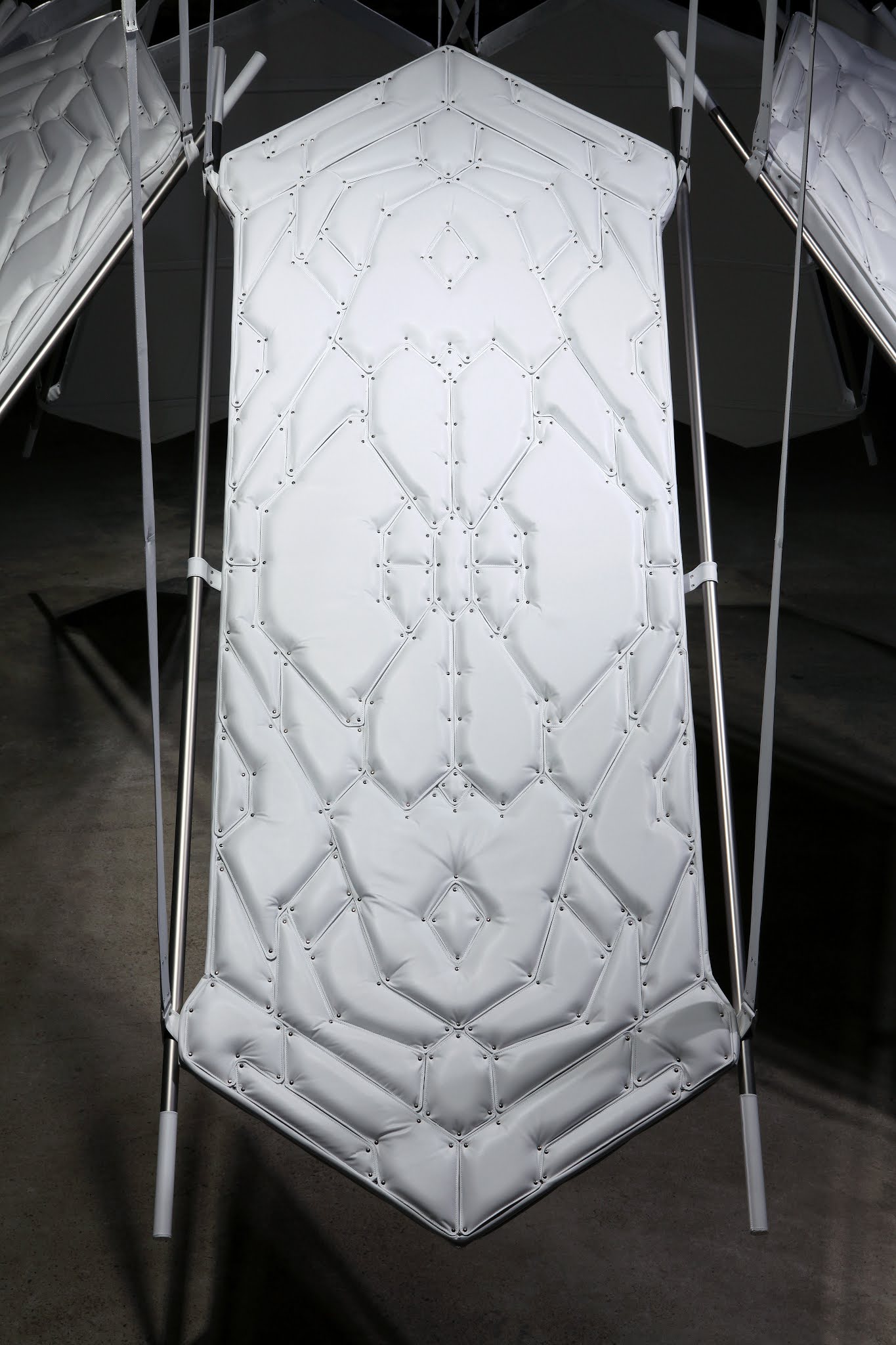 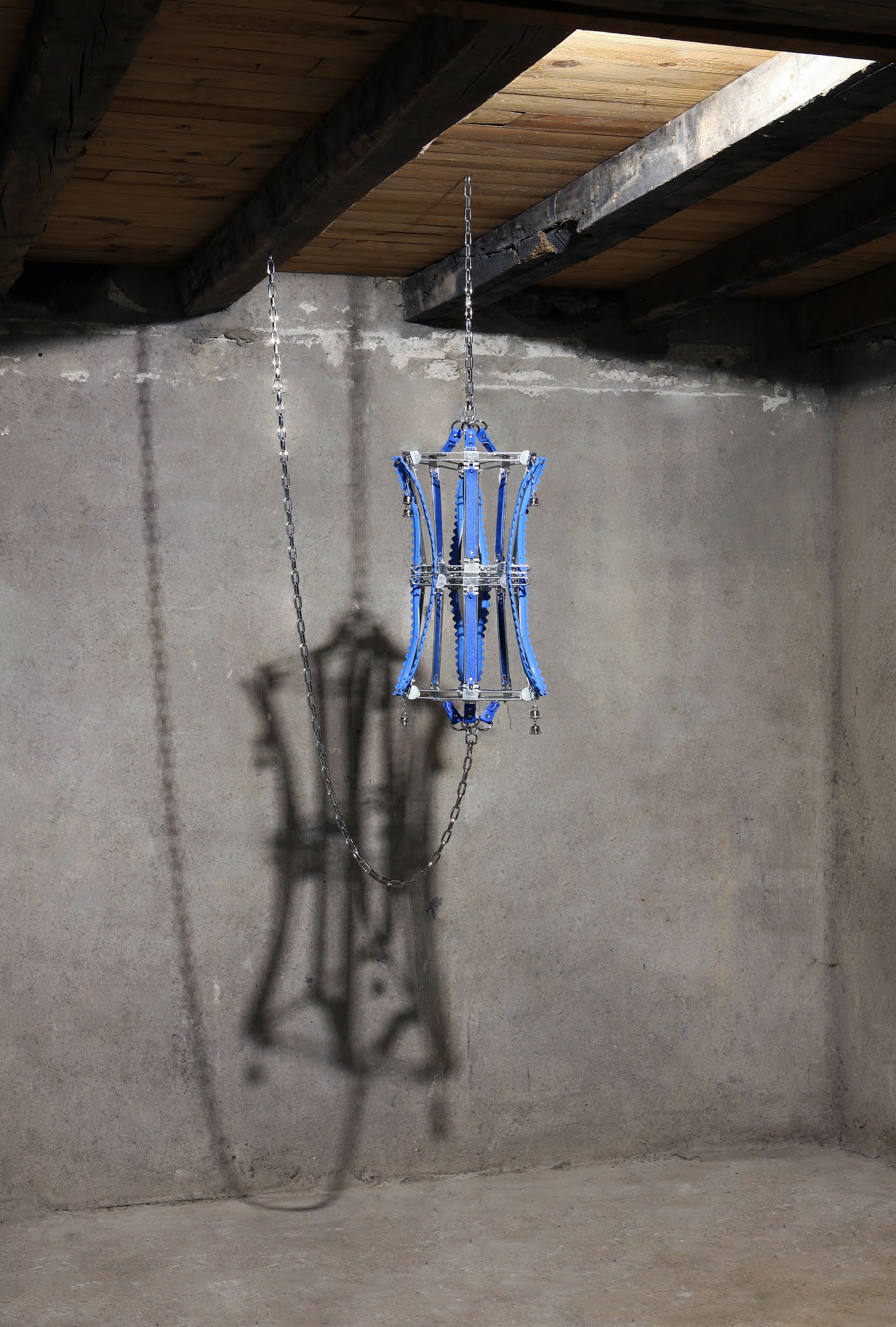 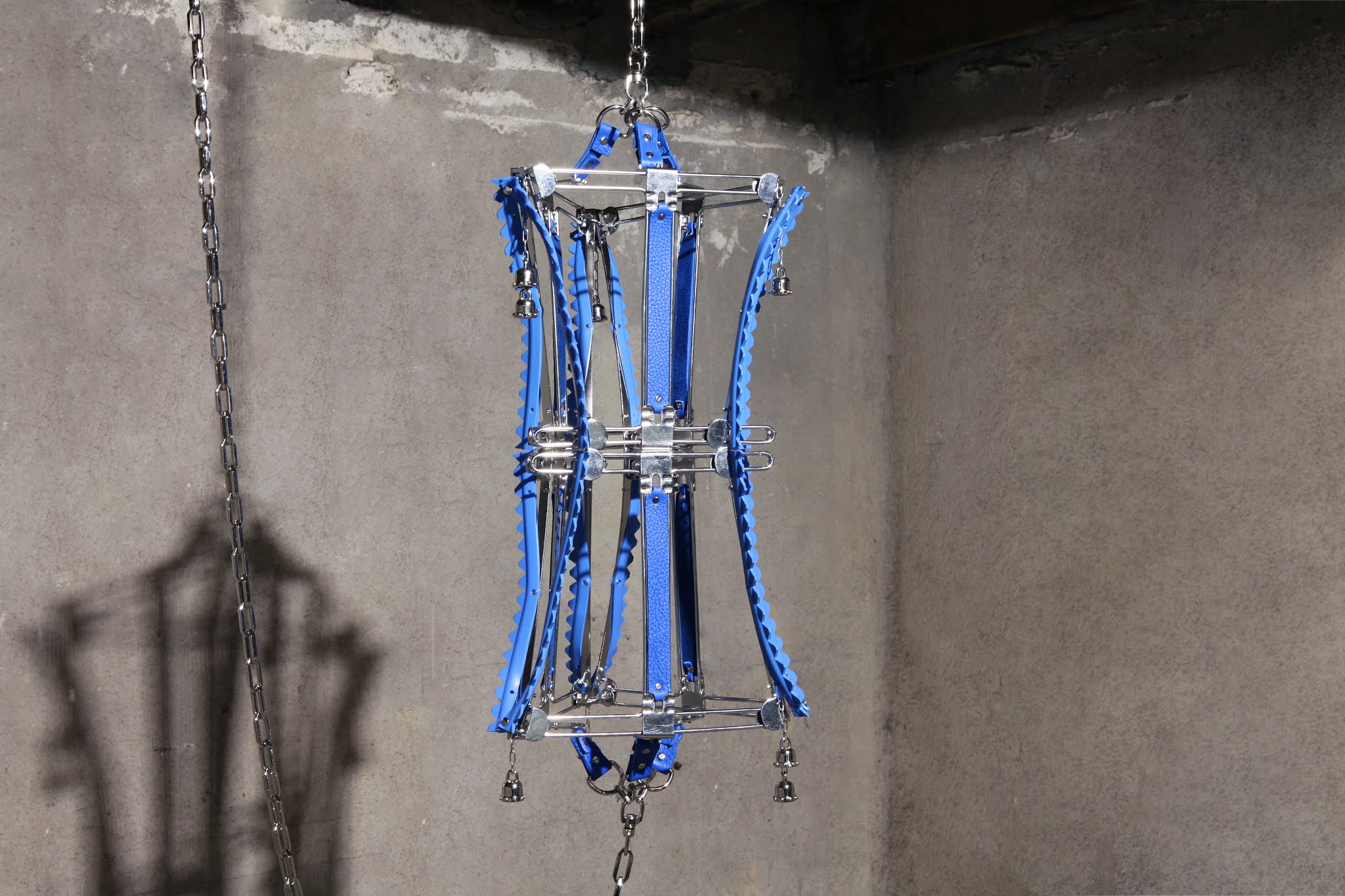 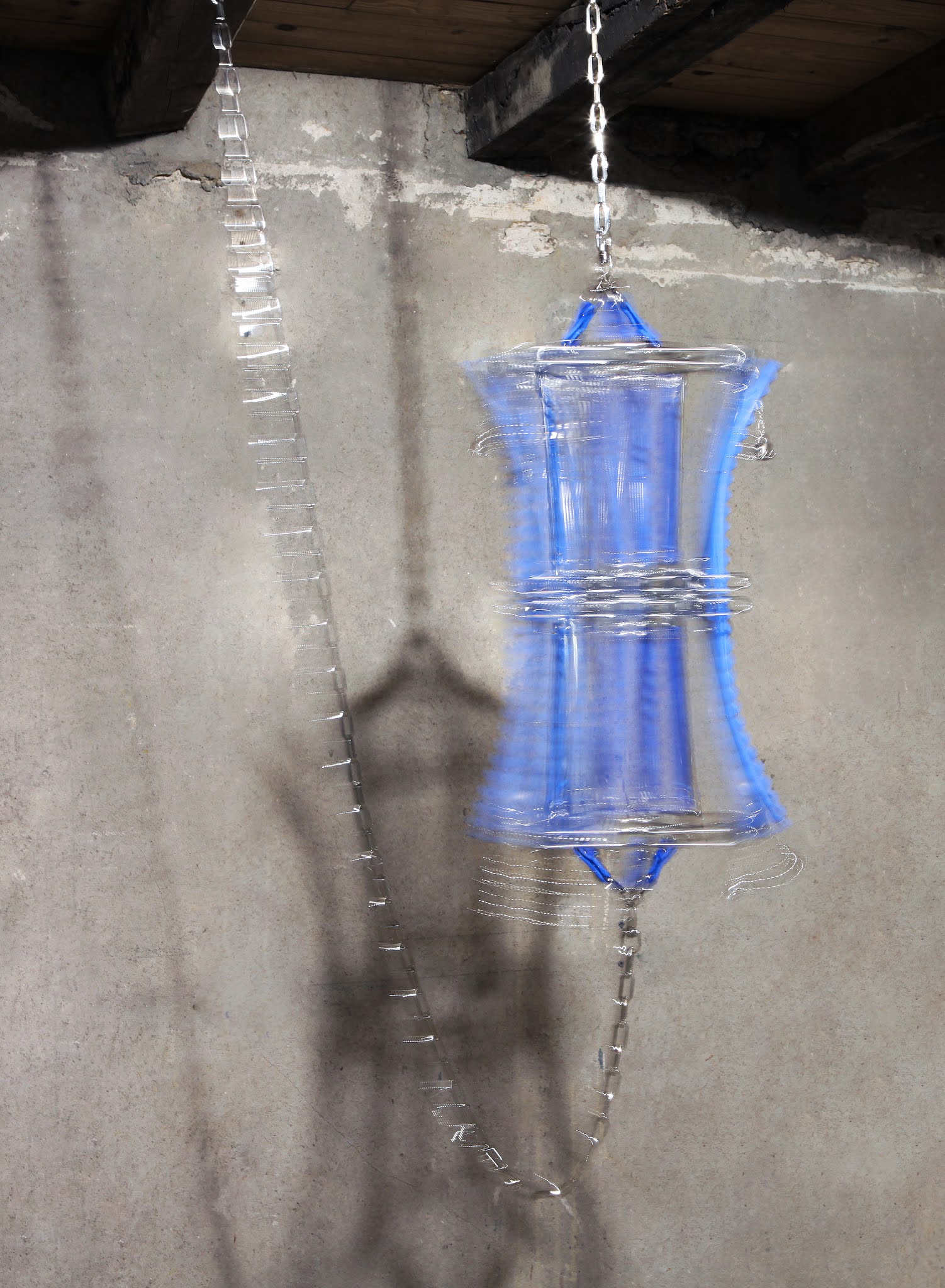 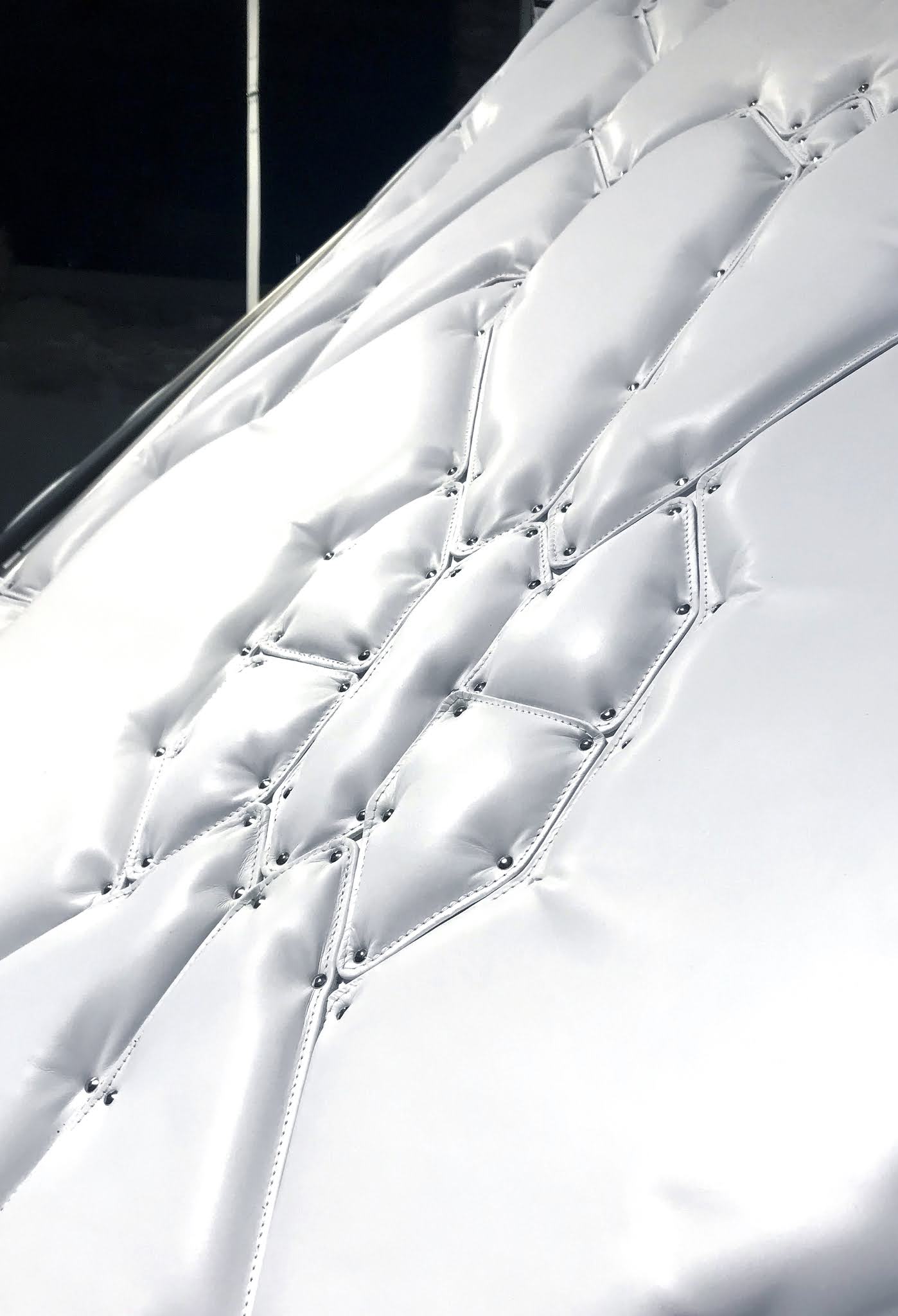 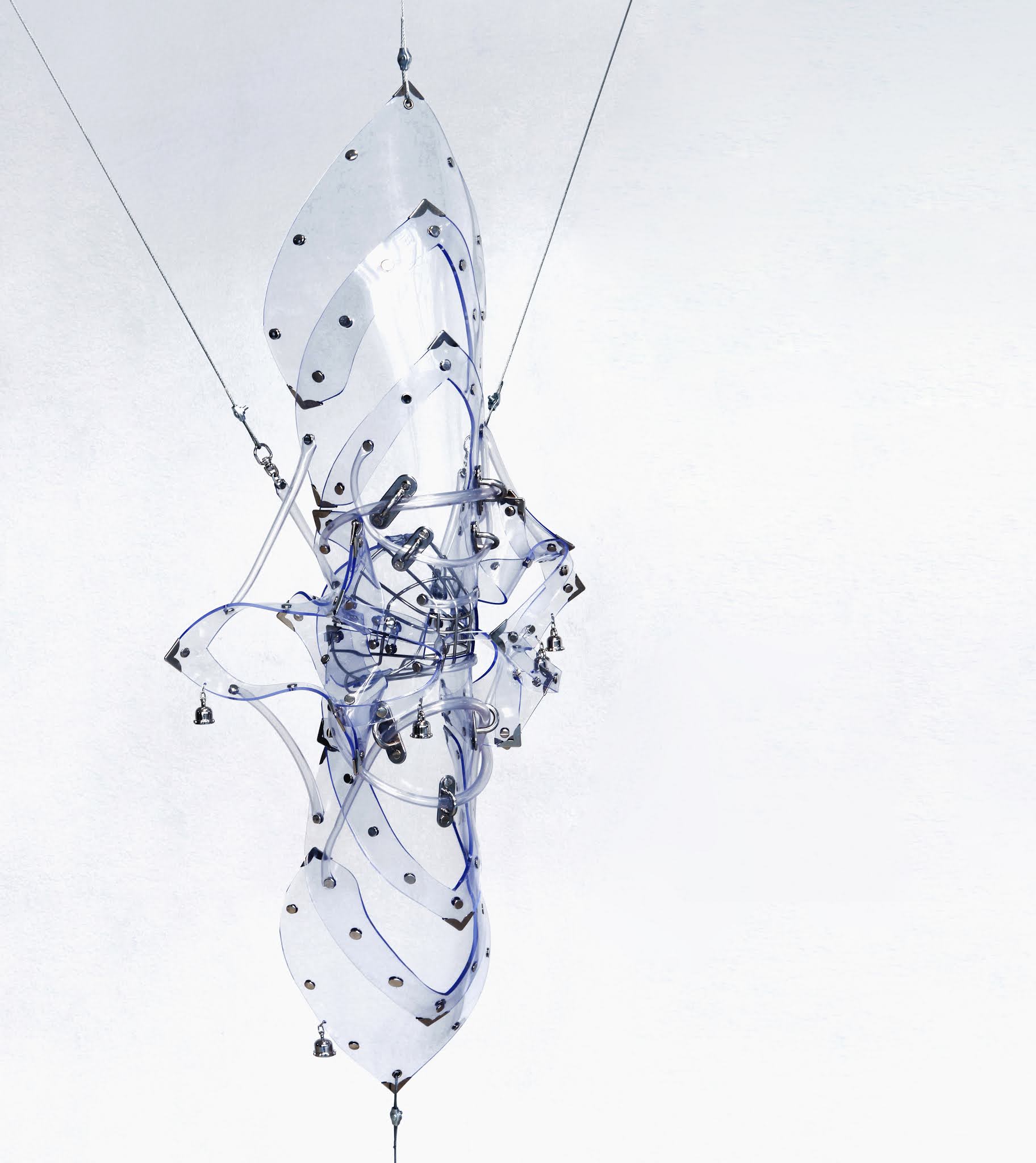 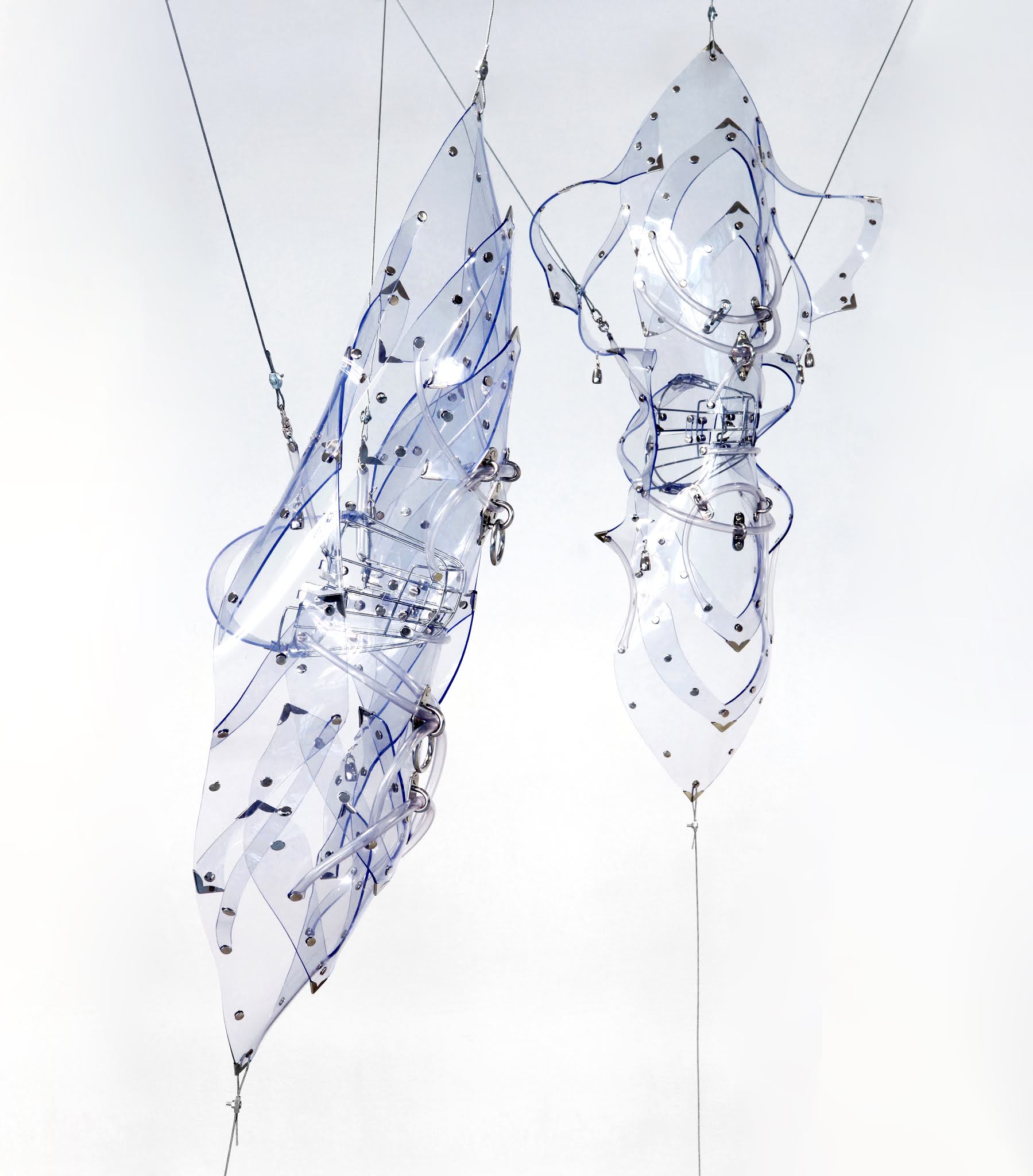 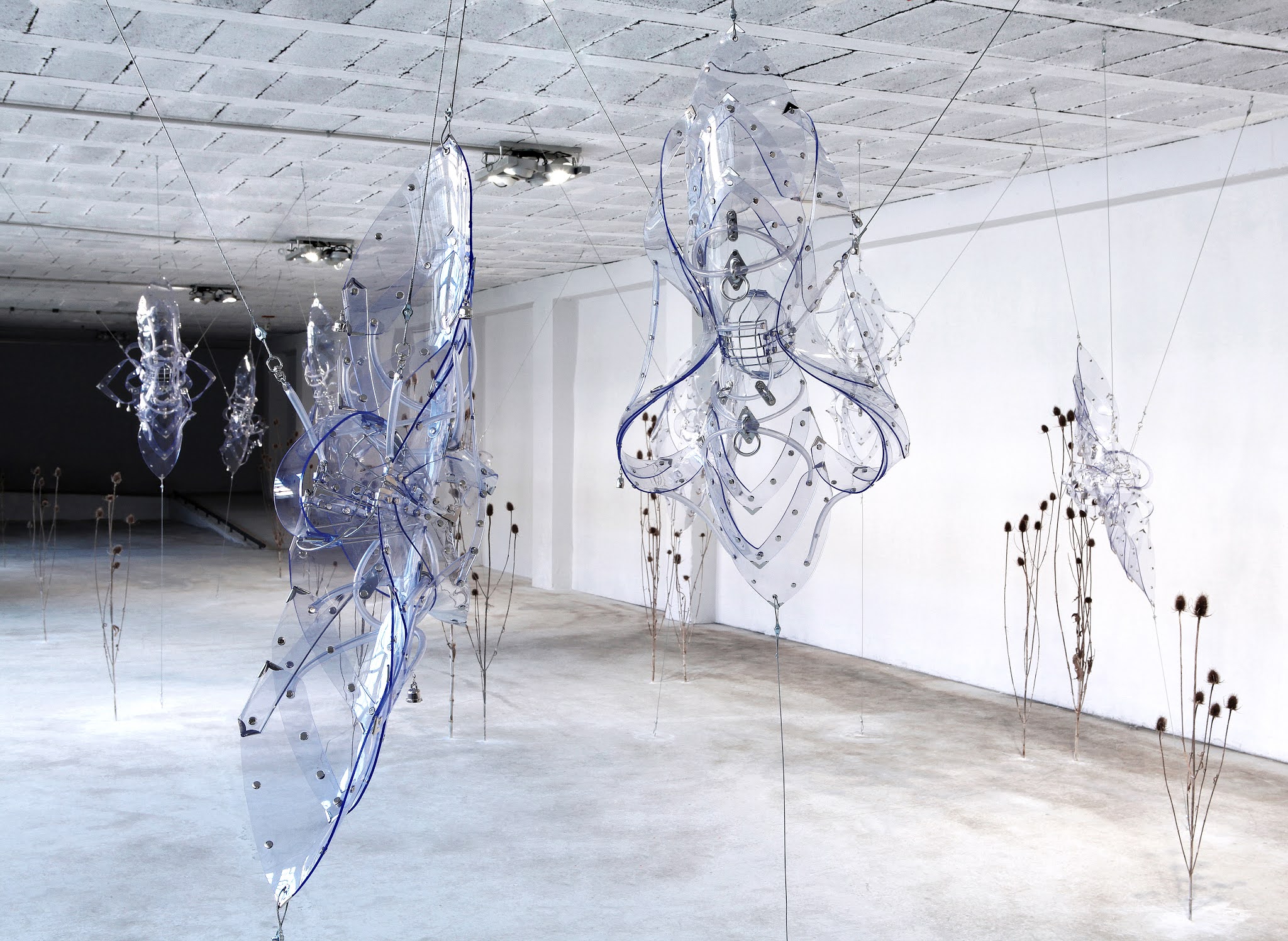 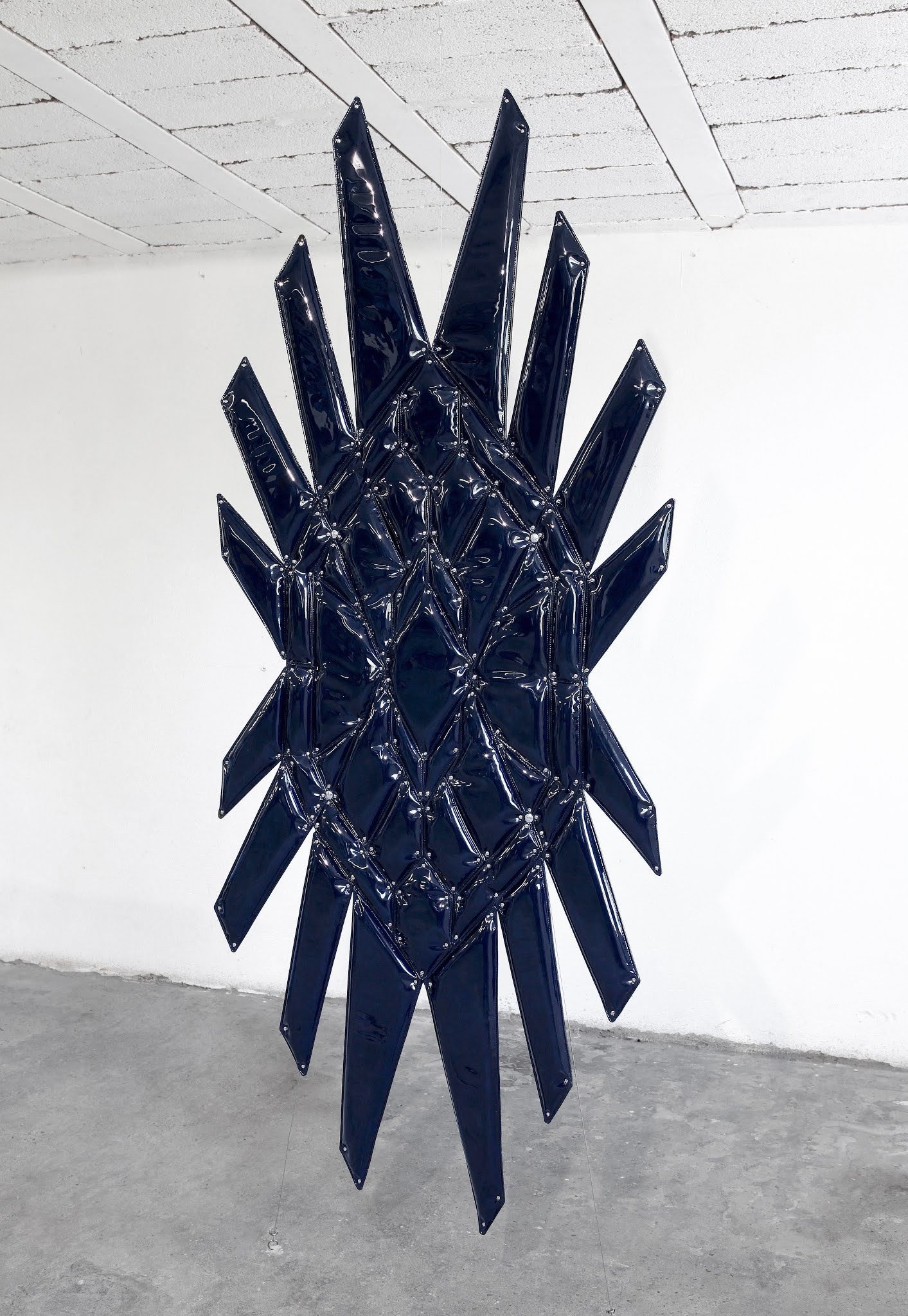 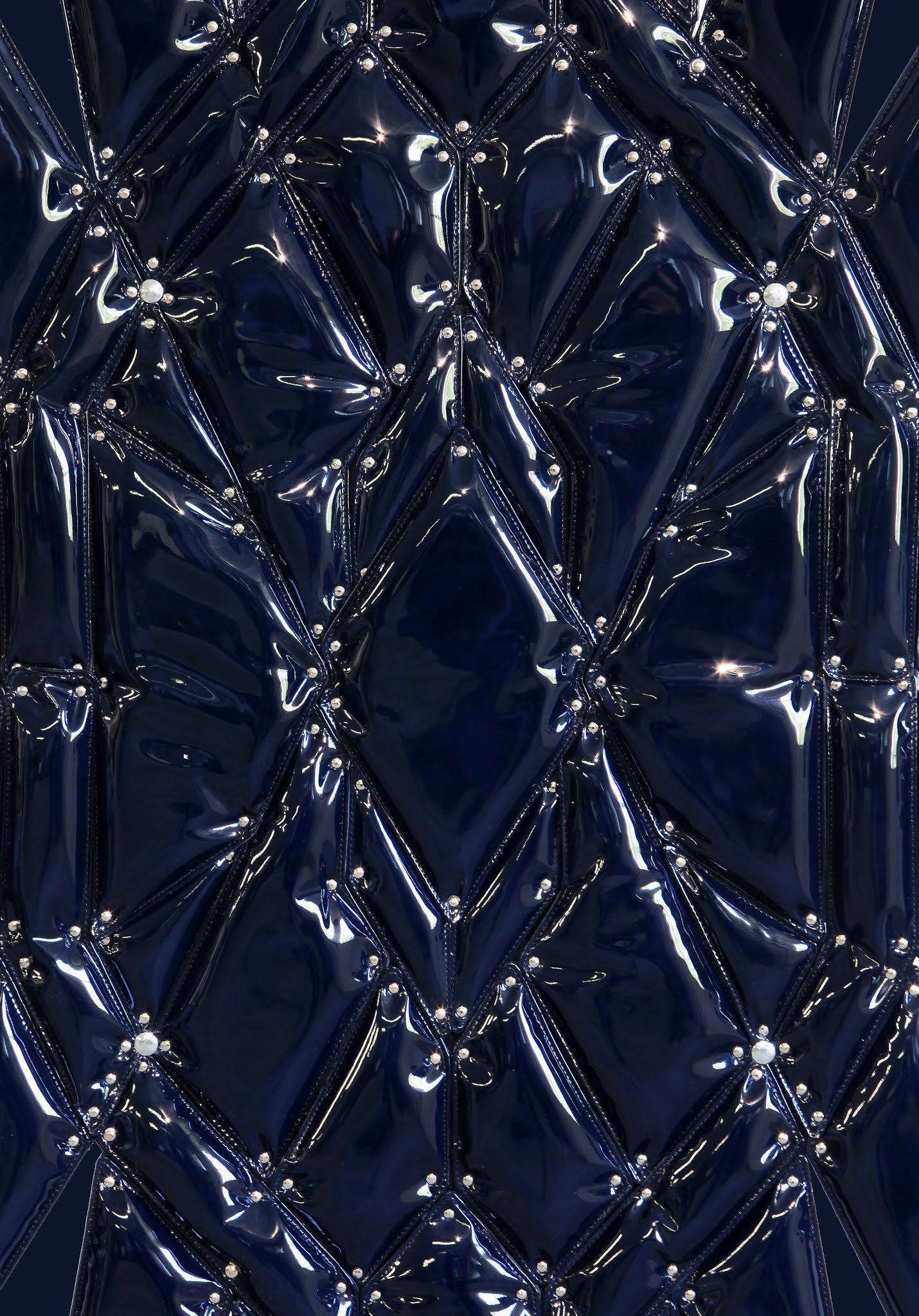 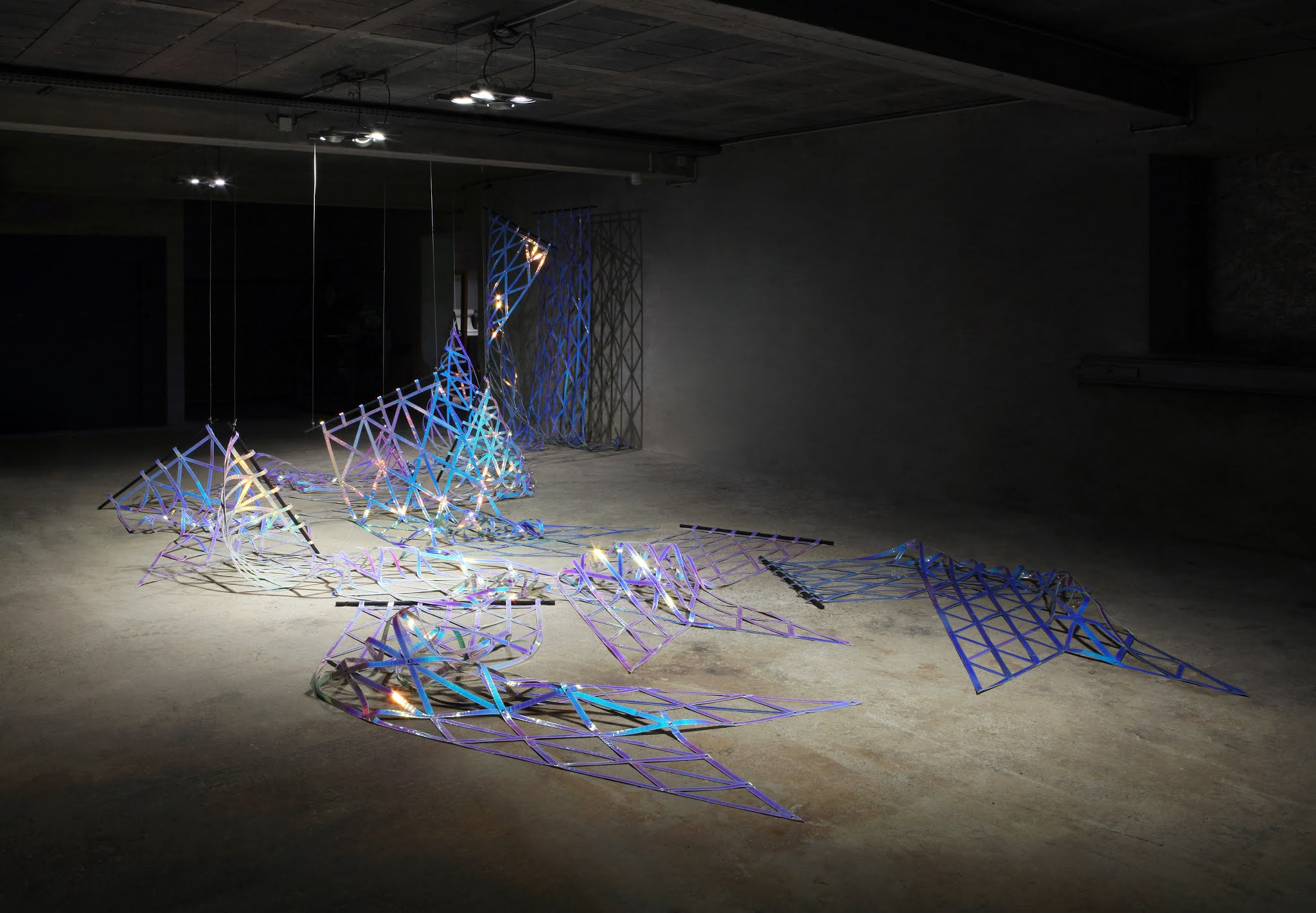 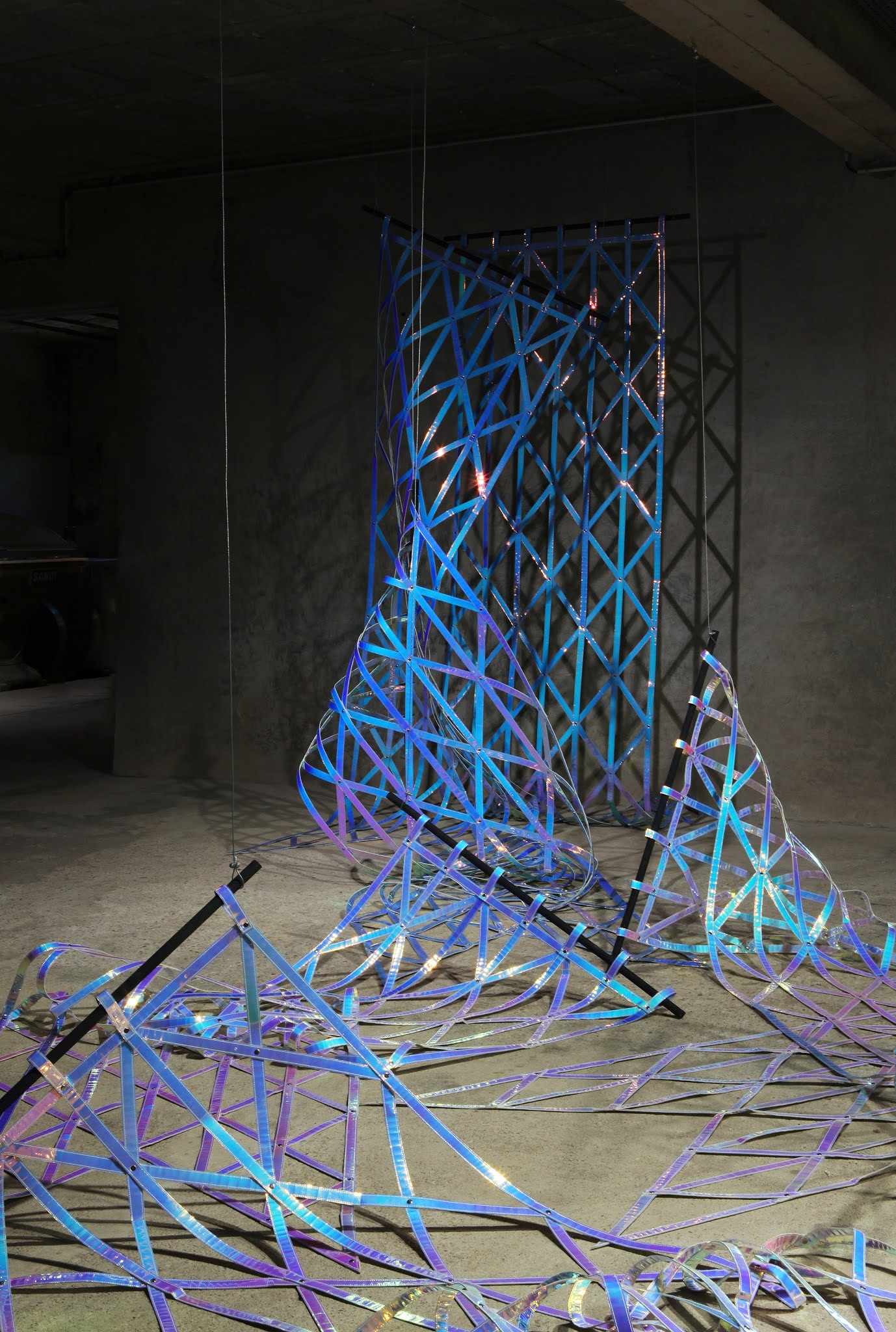 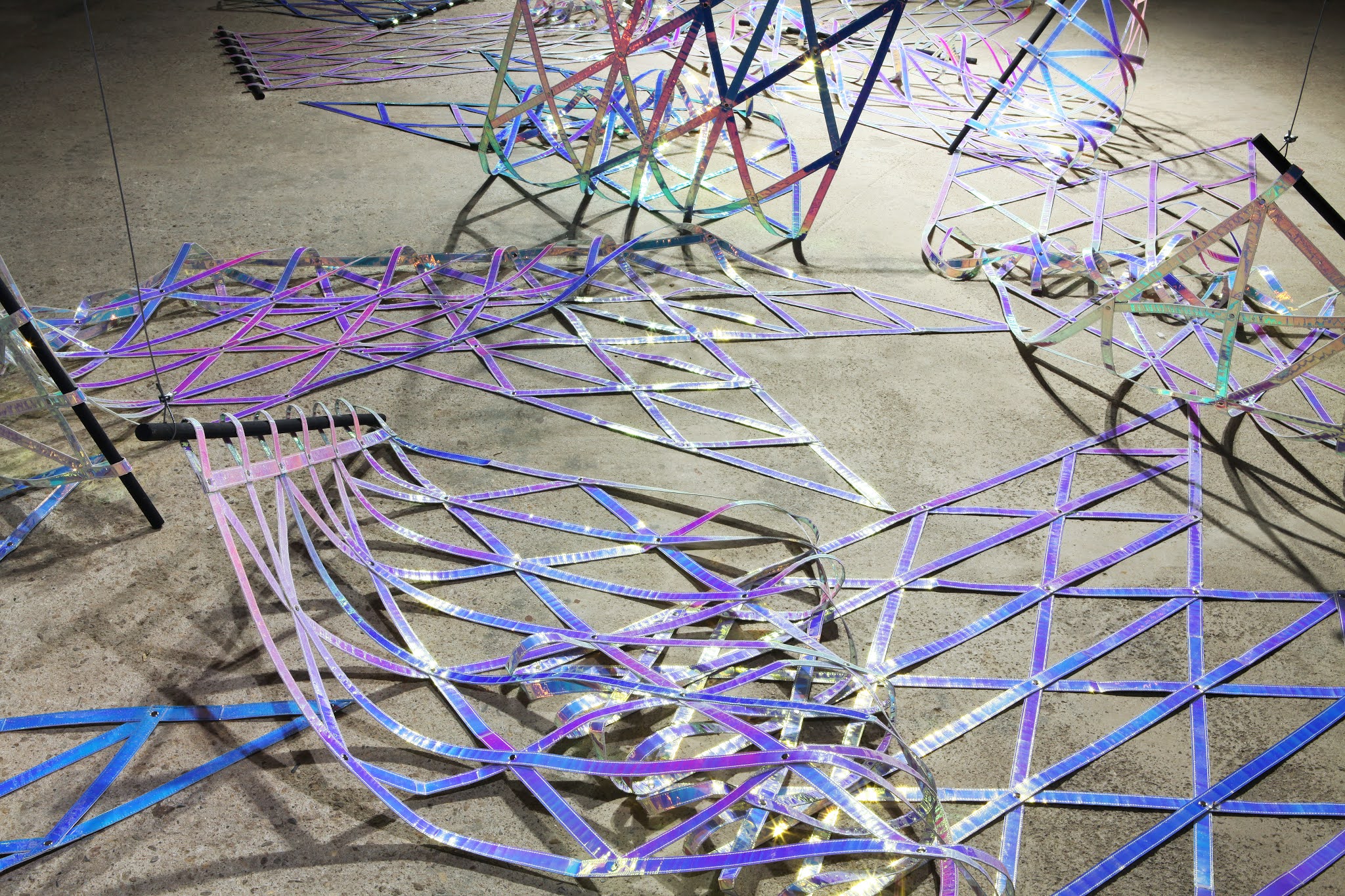 Photography: Phobé Mayer & Floryan Varennes
The finery for the totality
With Violence Vitale, Floryan Varennes continues his incantatory exploration of a rigged-out body. Whether augmented or impeded, this body is characterised making sure never to represent it by means of a process of metonymic suggestion, staking everything on finery. Based on rich academic erudition mixed with the imaginary worlds of esoterism and science fiction, the artist crystallises certain motifs, visual tropes and recurrent narratives. But although it a matter of a techno-body, it is also more broadly—like any other organism when hurled into the flow of evolution—that it must hold together growth and decline, reparation and aggression, negotiating doses between one and the other; and in line with the definition of conatus, a key concept in Spinoza’s Ethics, the aim of this is to “persevere in its being” and preserve or even increase its “power of existence”.
Since undertaking his first major works in 2018, the artist has been rooting his thought and motifs in two interwoven chronological registers: on the one hand, the Middle Ages—its power relations linked to the body, and its forms of life, thought and art, inasmuch as they mitigate increasing social brutality, as historian Johan Huizinga hypothesised in The Autumn of the Middle Ages (1919); and on the other hand, speculative futures, as diffracted in the popular imagination through existing cultural productions, stories and images. In this way, anthropotechnics, understood as the transformation of the human being through body practices and alterations, detaches from its usual meaning, tainted as it is by triumphant utopianism, in order to point out a characteristic of human beings—something like their very presence.
By these means, the artist gives shape to one of his main concerns: shaking off the essentialisms and binarisms of Western modernity, those that impose an artificial separation of nature from culture, gender from gender, but also—and this will be the specific approach behind the research undertaken in the context of Violence Vitale—instituted knowledge from popular, hereditary, oral and communal knowledge. The exhibition confirms a turning point relative to the artist’s previous series and exhibitions, broadening his approach to the individual adorned body, extending it to the social body as a whole. More particularly, this exhibition is a reflection on care and healing, inseparable from their twin states of violence and war. Its title therefore re- lates to this, put forward under the auspices of an oxymoron, and of a possible resolution through relations of protection in various palpable forms, and also of the suspension of contrary states.
Taking as a theoretical foundation his interest in medieval medicine, whose “antinomic curative dimension” he says he is exploring, Floryan Varennes offers a variegated scenographic journey conceived as a sumptuous and extravagant narrative arc. Without erasing the tensions or the struggle for life, the series nevertheless prepares a possible partial resolution through its more directly technological and cyberfictional aspect: technical evolution is postulated as reversible, neither good nor bad, and its course as changeable, on condition that bruised or vulnerable bodies take hold of it together, and arm themselves with it in turn. By reconnecting imaginations with history, more precisely with the late Middle Ages, which the artist defines as a period enabling the history of margins to be told, belief in alternative uses of technical resources resurfaces. Their desiring representations, their elective forms are yet to be brought into being, opening the spectrum of possibilities, leading it towards a resilient polysemy. If philosopher Bernard Stiegler, after Jacques Derrida, drew attention to the fact that “every technical object is pharmacological” (Ars Industrialis, 2010), both poison and remedy, it is in this sense: destructive power contains a curative power, and every technology is implacably ambivalent at first.
In opposition to a surpassing of the body by technology, Floryan Varennes advances the idea that an alter- native use of technical resources is possible. His stance is that of attention to zones of friction, those which receive vulnerable bodies and open the space of care, reparation and regeneration. Instead of a fixed illustration, the artist presents us with possible pulsating incarnations of a life that is still contained.
Ingrid Luquet-Gad
* The exhibition Violence Vitale by the visual artist Floryan Varennes is the public restitution of a 3 months residency within the framework of the device "Residences of artists in companies", set up by the French Ministry of Culture, supported by the DRAC Occitanie, and hosted by the cultural association AFIAC.