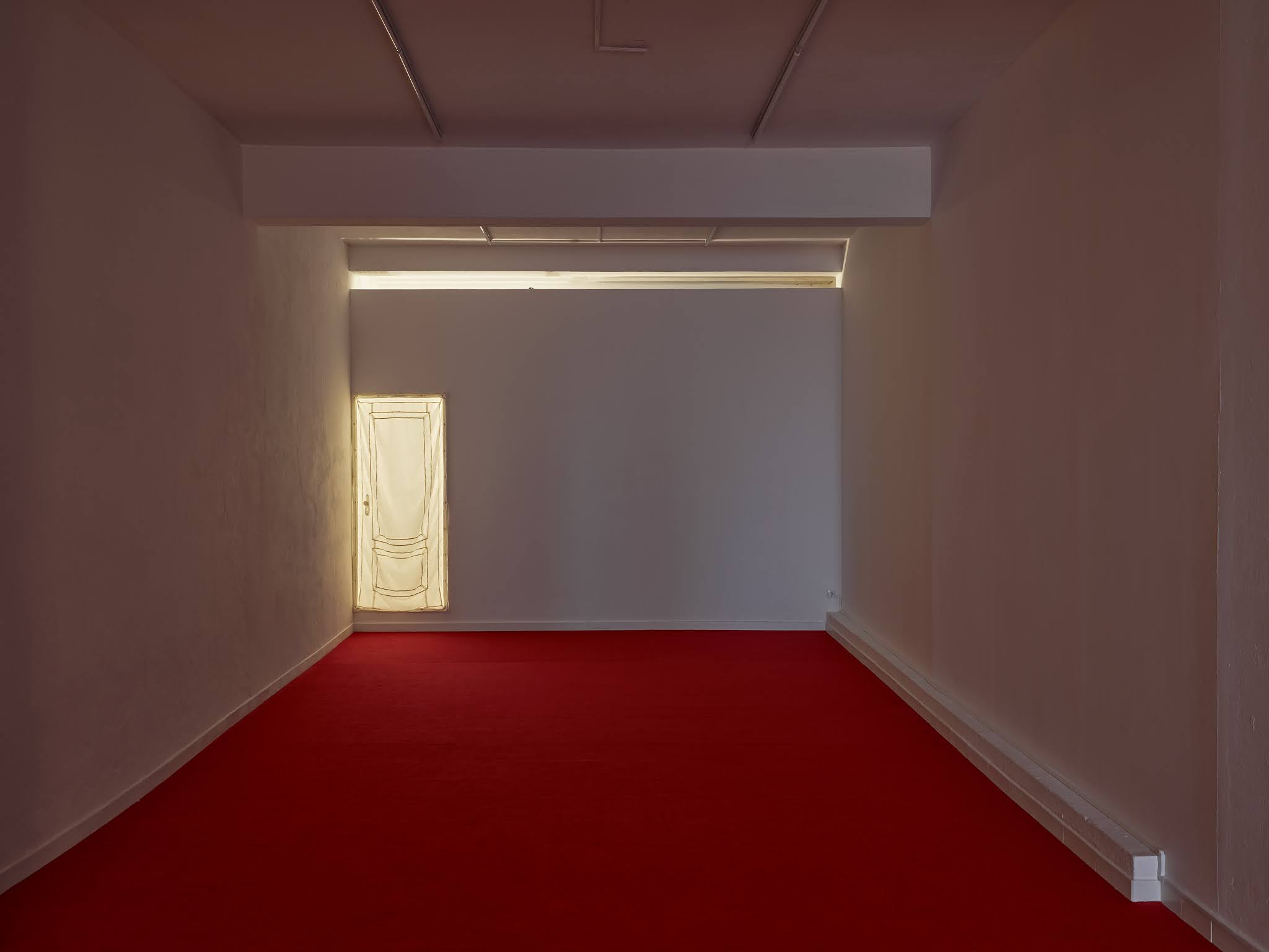 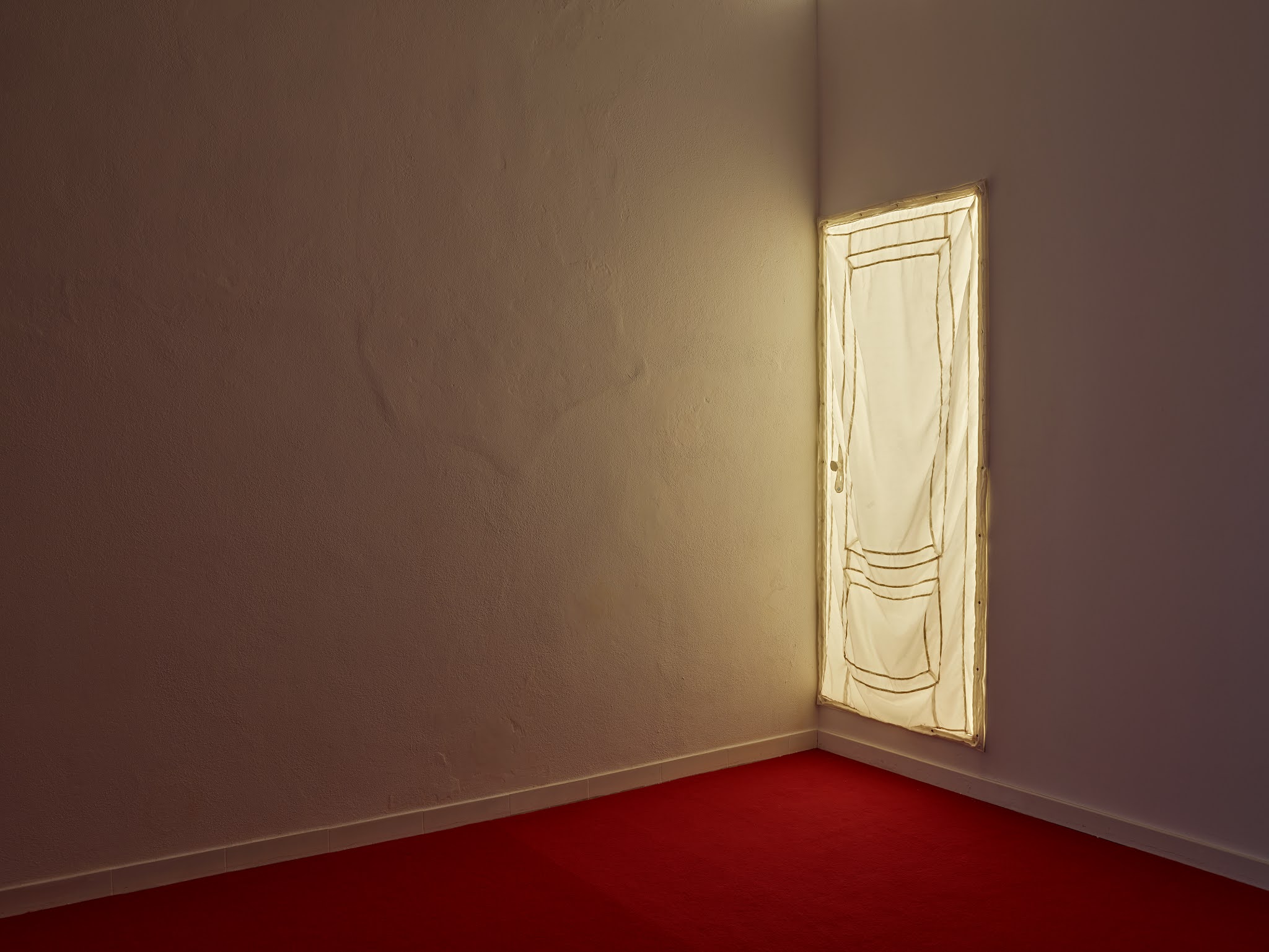 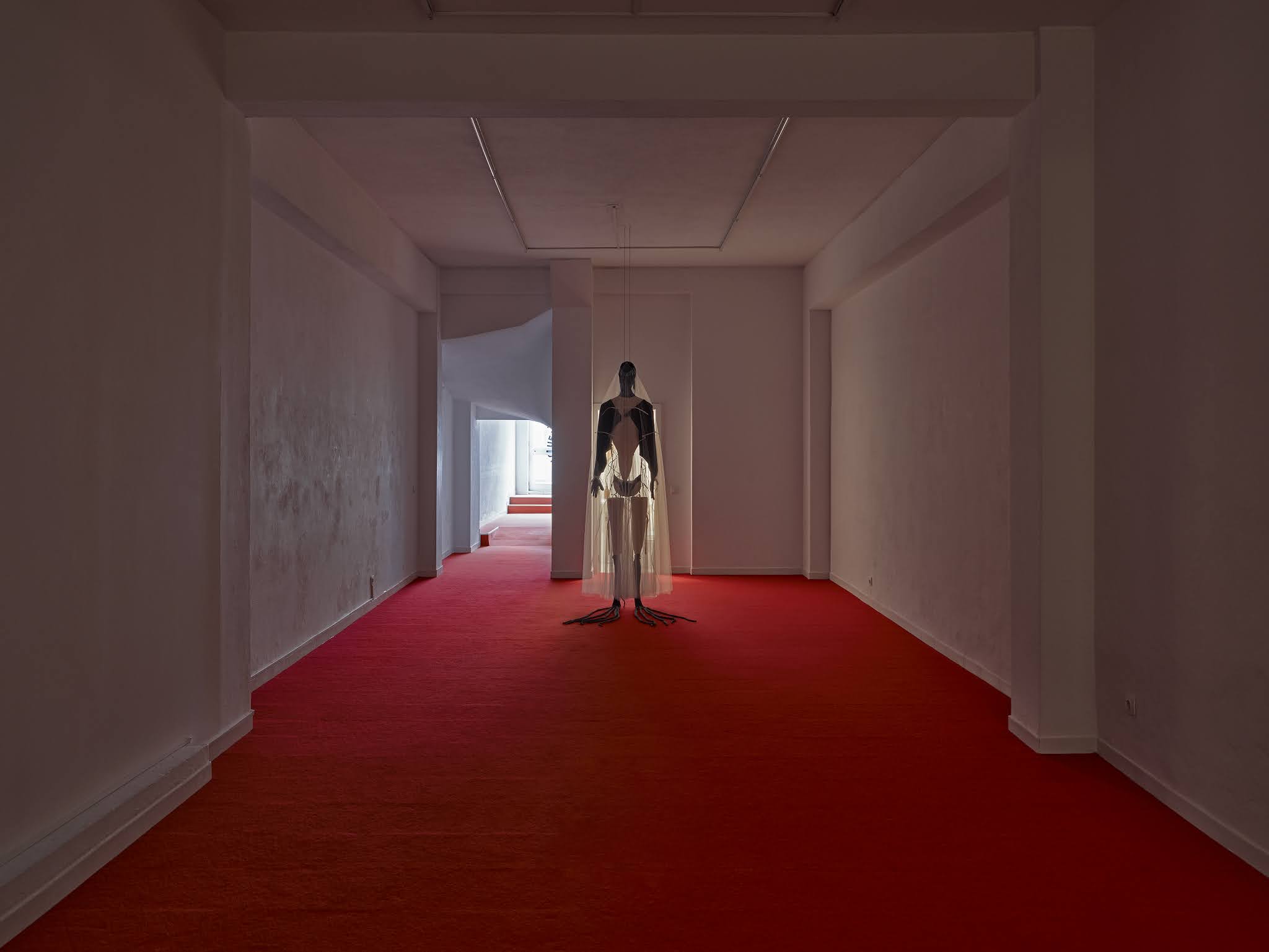 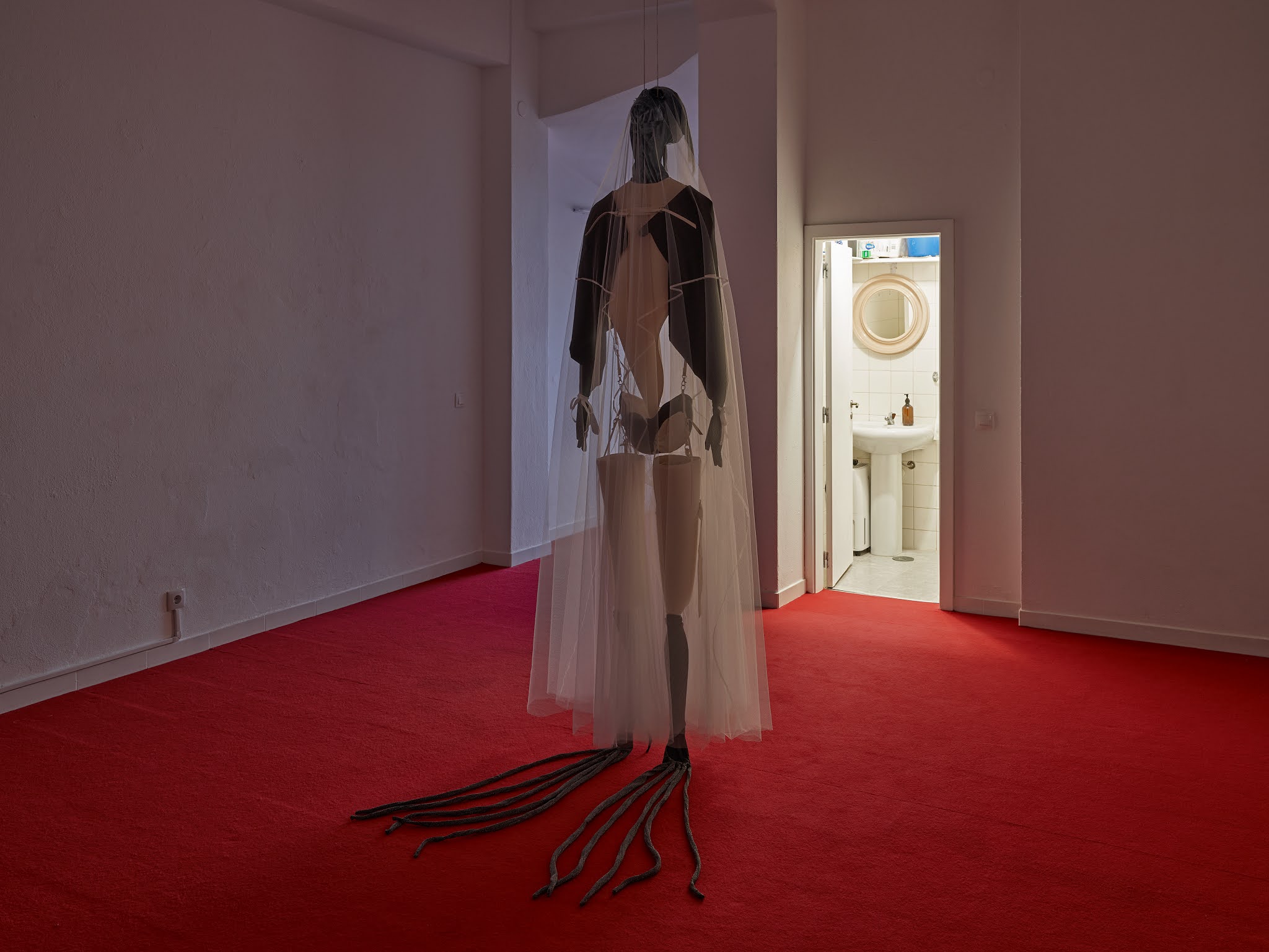 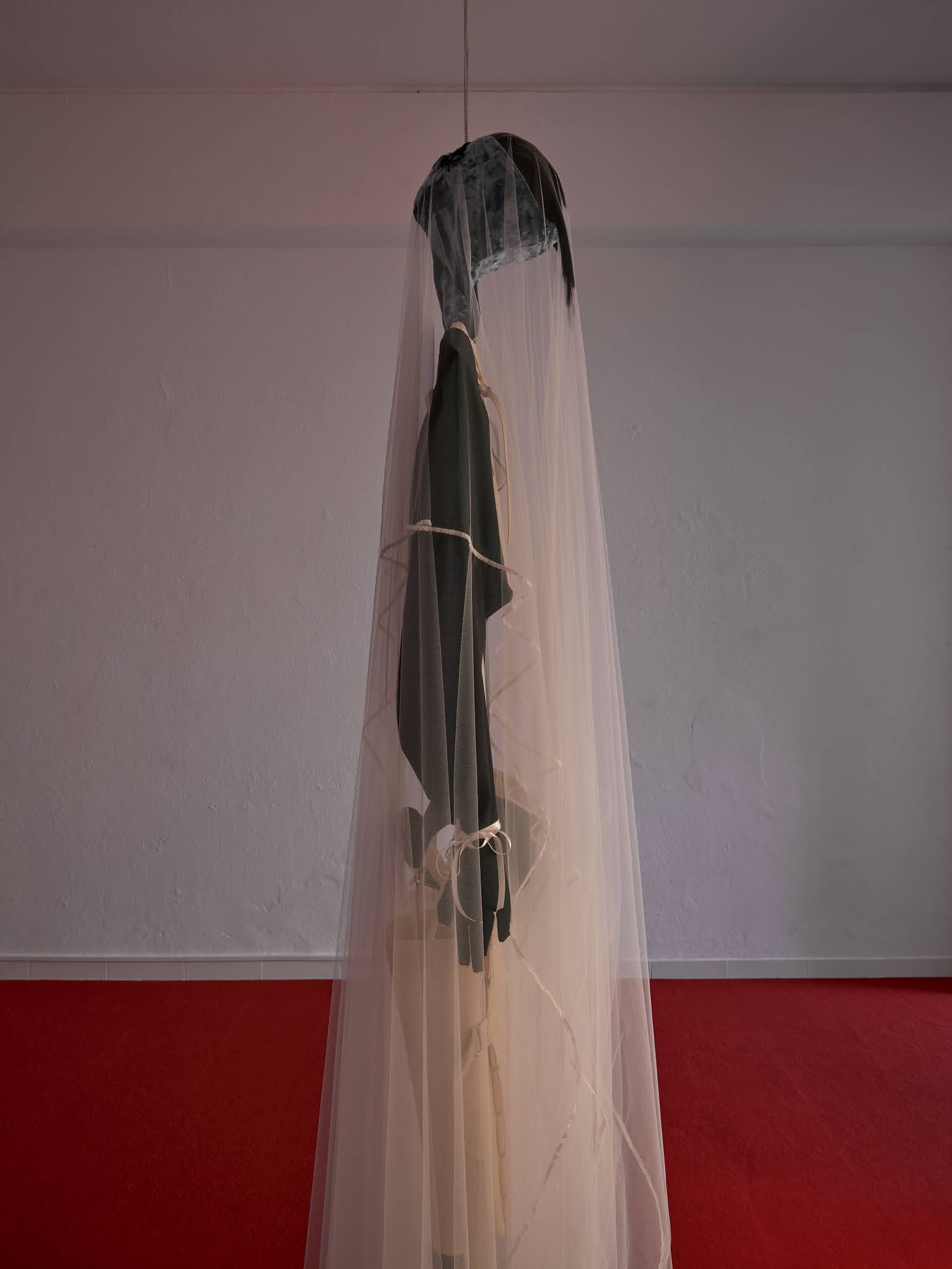 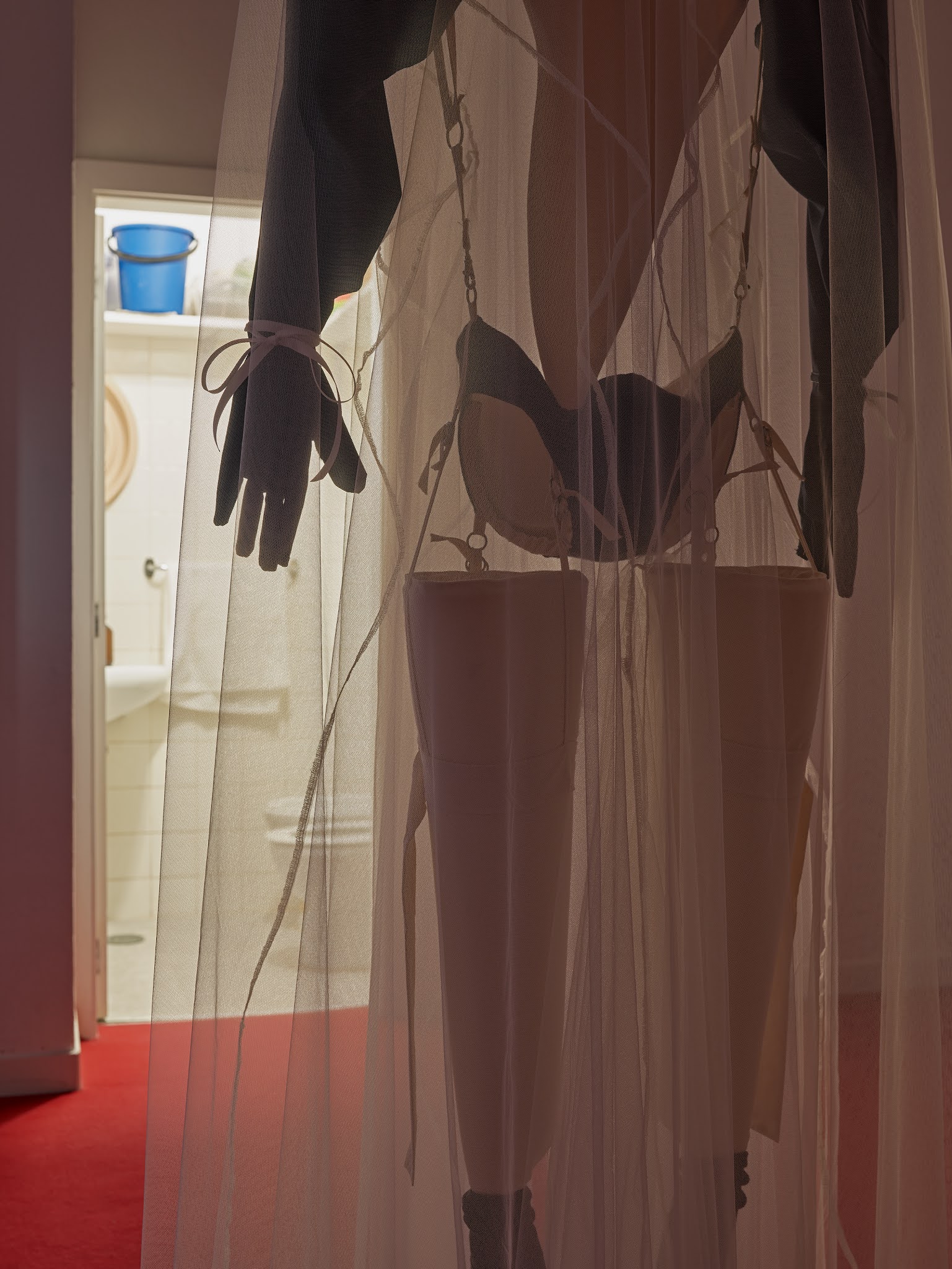 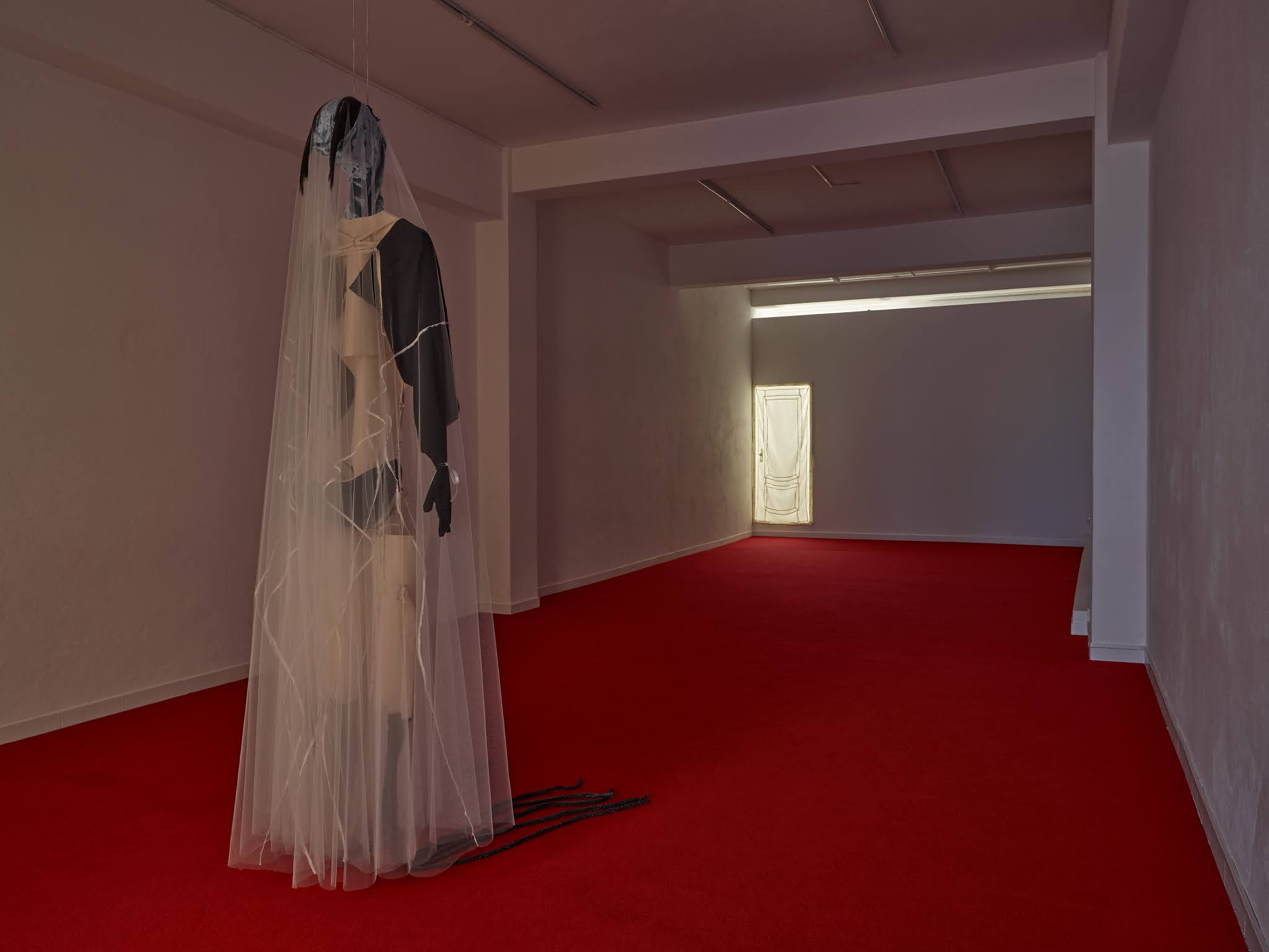 All images courtesy and copyright of the artist and space. Photos by Filipe Braga.
When I was in high school I was asked to model for a photography project about cardinal sins. During its presentation the student was asked by his teachers why was I chosen and he said it was because I looked ugly. Three years ago I was commissioned to make a public art piece for a prominent shopping mall in Lisbon. After the project was pitched to her, the head of marketing was confused. She was annoyed that my work—and, indeed, I—did not look Portuguese enough. Last summer at a dinner with some artist friends, one person turned to me and said that I was successful because I was a “chinoca” [chink] and identity politics are trendy right now. The most terrifying realisation I have had is that none of these people intended to offend me. In their eyes it was just a matter of fact that I, as a first generation Portuguese and a child of Chinese immigrants, didn't fit their standards of beauty, nationality or personhood. That I was a monster, an alien, an industry fetish.

Given that the peer who used a racist slur to describe me and my practice is active within the local art community, I couldn't continue with the exhibition without taking action. So, I set out to look into the state of racial politics in Portugal today. I wanted to understand how a self described antiracist and anti-fascist, who attended the local BLM march and ticks all the boxes of millennial ‘leftism’, gets to use a racial slur so effortlessly in private. If this term was not meant to be offensive, then why does he get to evacuate the meaning from these words? Why does he have the power to displace history? Why does he have the privilege to assign identity?

Trying to understand how someone aligned with leftist thinking called me “chinoca” made me wonder if there was a racist tradition embedded in the Portuguese Left. There doesn't seem to be an explicitly racist tradition, but it was telling to see how the Communist Party [Partido Comunista Português], Portugal’s largest opposition party, was never staunchly anti-colonialist until it saw this position as an opportunity to overthrow the authoritarian regime¹ . The 1969 student protests in Coimbra that sparkled the beginning of the end of the empire were largely comprised of upper middle class students mirroring the May ’68 protests and counterculture movements abroad². The Portuguese left-leaning vanguard was heavily invested in internationalism, meaning the colonies were decolonized at lightning speed and left grappling with a five-centuries-old record of dispossession and exploitation. Why am I going on about anti-colonialism? Because I am not interested in an affect-based framework for racism. Hate and fear are real, but porous. They leave too many exits for accountability to escape from. In my experience, racist behaviour is usually understood as an isolated event devoid of history. It’s closer to an act of passion—impulsive and quickly diffused once apologies are offered. I must accept these apologies otherwise I’m being ungrateful. Apologies are gifted, and gifts are deemed a good thing. What more could I want, they ask.

Among my ‘woke’ friends, coming to terms with the colonial past of one’s nation has become a moral, cathartic, and individualistic experience: colonialism=slavery=bad, accountability=knowledge=good. I was bad, now I am good. To feel bad about a bygone era protects their ego from acknowledging their role in reproducing notions of liberty, freedom of expression and progress that only benefit a particular kind of geopolitics. In my case, the artist I had dinner with is someone who I identify as a ‘legacy liberal’. He is someone born and raised with liberal ideals—his dad was an active participant in overthrowing the regime and therefore he accrues the revolutionary capital earned by his ancestors. He once had a Frantz Fanon book placed on his studio desk, he dabbles in the critique of capitalism like one must in the ‘age of anthropocene’, he has become attuned to the irony of whiteness via TikTok. Yet, he’s afforded a luxurious distance from being a subject of critique precisely because society entrusts to people like him the role of the critic, the voice of reason. Perhaps my ambivalence toward using descriptors like privileged, white, male, cis, straight or Western hinders my message because I refuse to engage in the same reductionist rhetoric as he does. But I hope you, the reader, understand my point. I am willing to accept that calling me “chinoca” doesn’t make him a racist, but the ease with which he used such a term is a testament to a certain bourgeois, upper middle class mentality that remains unscathed after the fall of Estado Novo in 1974.

I would be remiss if I did not bring up Lusotropicalism, the ethnopluralist framework promoted by Salazar’s regime that glorified colonialism as the Portuguese ‘civilizing mission’³. It became a foundational myth for Portugal’s national identity that lingers to this day⁴. Considering that Lusotropicalism attempted to remove the question of race from Portuguese coloniality, the available critical debate that remains utilises non-white bodies as either historical data (ie.: the transatlantic slave trade as a rational mercantile endeavour) or strictly as a colour chart for the human skin. Within this model seeing colour does not equate to seeing race. The pejorative term ‘preto’ is widely used today by non-Black people to describe Afro-Portuguese or Black people, so it is unsurprising that I was referred to as “chinoca”. I certainly look like one, don’t I? This racialist assignment of identity is bolstered by a resolute sense of post-racial entitlement that leaves no space for the Other to reclaim their subjectivity. By stripping the political category of race from its history, Portuguese society has undisputedly enshrined racialisation in the production of its national subjects. Thus it becomes natural to clutch our wallets when we see a Roma person, persuade Afro-Portuguese students to not pursue higher education, beat an Ukrainian migrant to death at the airport, hyper-sexualise the Brazilian body, accuse my parents and the Chinese community at large for tax evasion, human organ trafficking and world domination via commie COVID-19.

Returning to that evening, I have considered how my professional accomplishments were entangled with my ethnic background, the latter coming to represent my desirability in the context of the art-market. Suddenly, this racist equation is refashioned, and returns to the inevitable demon that made him do it: Capitalism! Capitalism made him think it! Capitalism made him believe it! Capitalism made him say it, so surely he must be excused and praised for his wit?! Could we argue that a racist slur is justified because it was used while criticising a larger evil? Are there legitimate moments to employ racist thinking that I need to know about?

My aim in writing this text was to make sense of what happened during that dinner. I felt betrayed by my colleague, who had access to my work and personal life and humiliated me in order to show off his inner provocateur. We were not alone at the table, but much like the teachers at my high school and the marketing team at the shopping mall, my friends remained undisturbed. I can’t blame them for living in a stagnant social reality that prioritises cosmetic change over ideological. Many of them posted black squares for #BlackOutTuesday on Instagram and used info-social posts to educate their followers. But none of them seem to have questioned the social contract that has inadvertently inscribed racism into its language. This is why racist slurs in Portuguese can easily slip away from their original meaning, so long as the speaker announces “I didn’t mean it that way”. Then in what way is a racist epithet meant to exist? Am I willing to be gaslit, to accept “chinoca” as a term of… endearment? How should I evade this racial profiling? By emulating K-Pop aesthetics instead? By proving I’m not a member of the Chinese Communist Party? By participating in the production of whiteness for whites so that they can feel visible in this era of everything-but-White? If I don’t, I’m bound to correct the racist projections laid onto me. I’ll have to submit to being “chinoca”, but not in that way.

On a final note, the works in the exhibition are not in reaction to this incident. They were inspired by the blueprint of the exhibition space. The toilet is placed in the middle of the room as it follows the piping system from the floors above. If powerful enough flushing the toilet could, hypothetically, bring down the whole building. In this instance flushing could be a powerful directional force with the toilet as a portal. One would go down. One would go under. So, I pictured the space as one waiting to go down under, or, if I reverse this scheme, one waiting to ascend from the underworld. Then what would come out of the toilet, shit? A shitty person?  Feelings of shittiness? Arriving somewhere shitty? I thought engaging with conceptual shit could be funny or political. But I wasn’t counting on being made to feel like shit in the process.

Let this text be a warning. If you ever address me with a predetermined idea of who I am again, I won’t be this civilised.

Bruno Zhu lives and works between Amsterdam and Viseu. Recent projects include presentations at Fri Art Kunsthalle in Fribourg, UKS in Oslo, ICA Cinema 3 in London, Frans Hals Museum in Haarlem, Antenna Space in Shanghai and Kunsthalle Lissabon in Lisbon. Zhu is a member of A Maior, a curatorial program set in a home furnishings and clothing store in Viseu, Portugal.