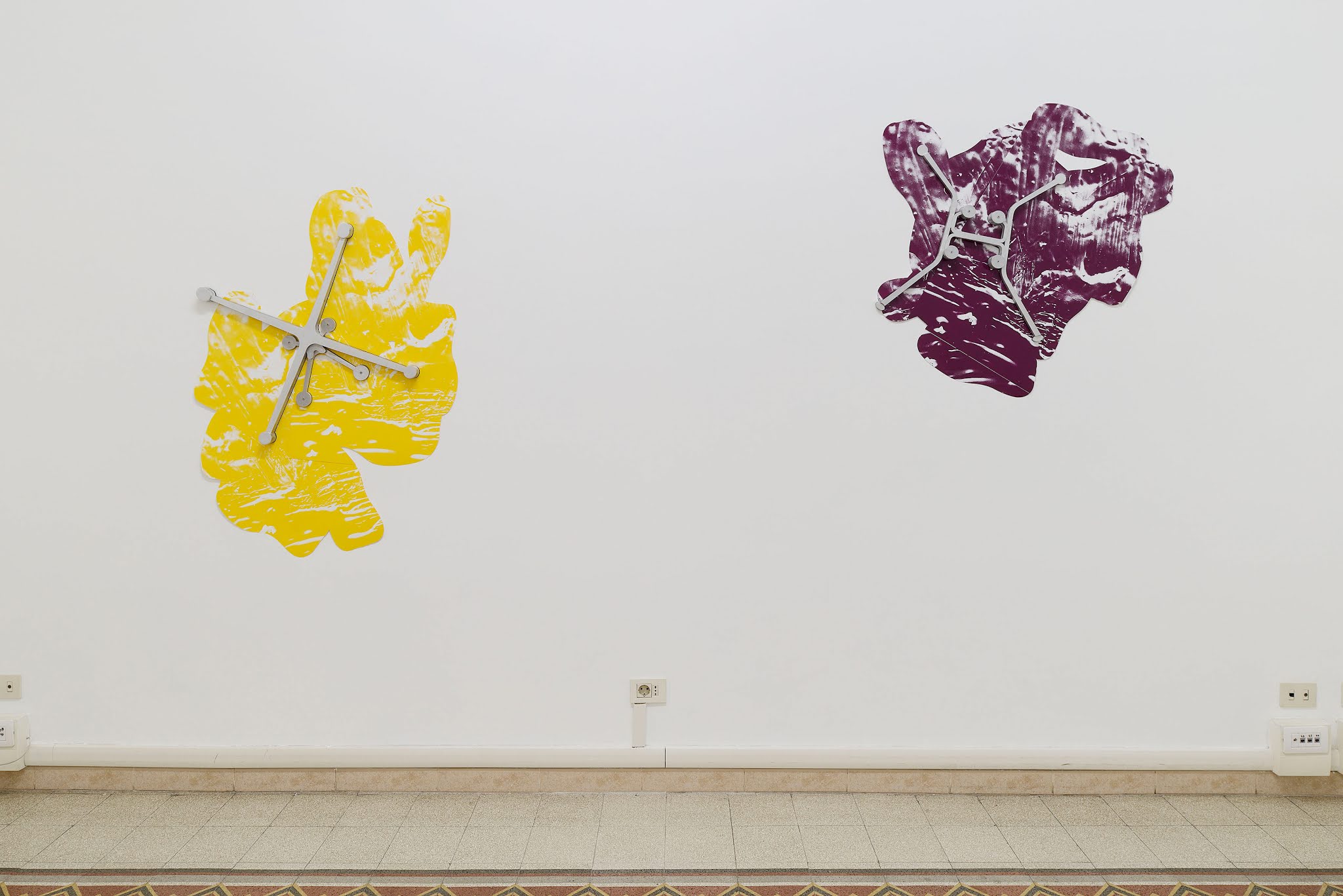 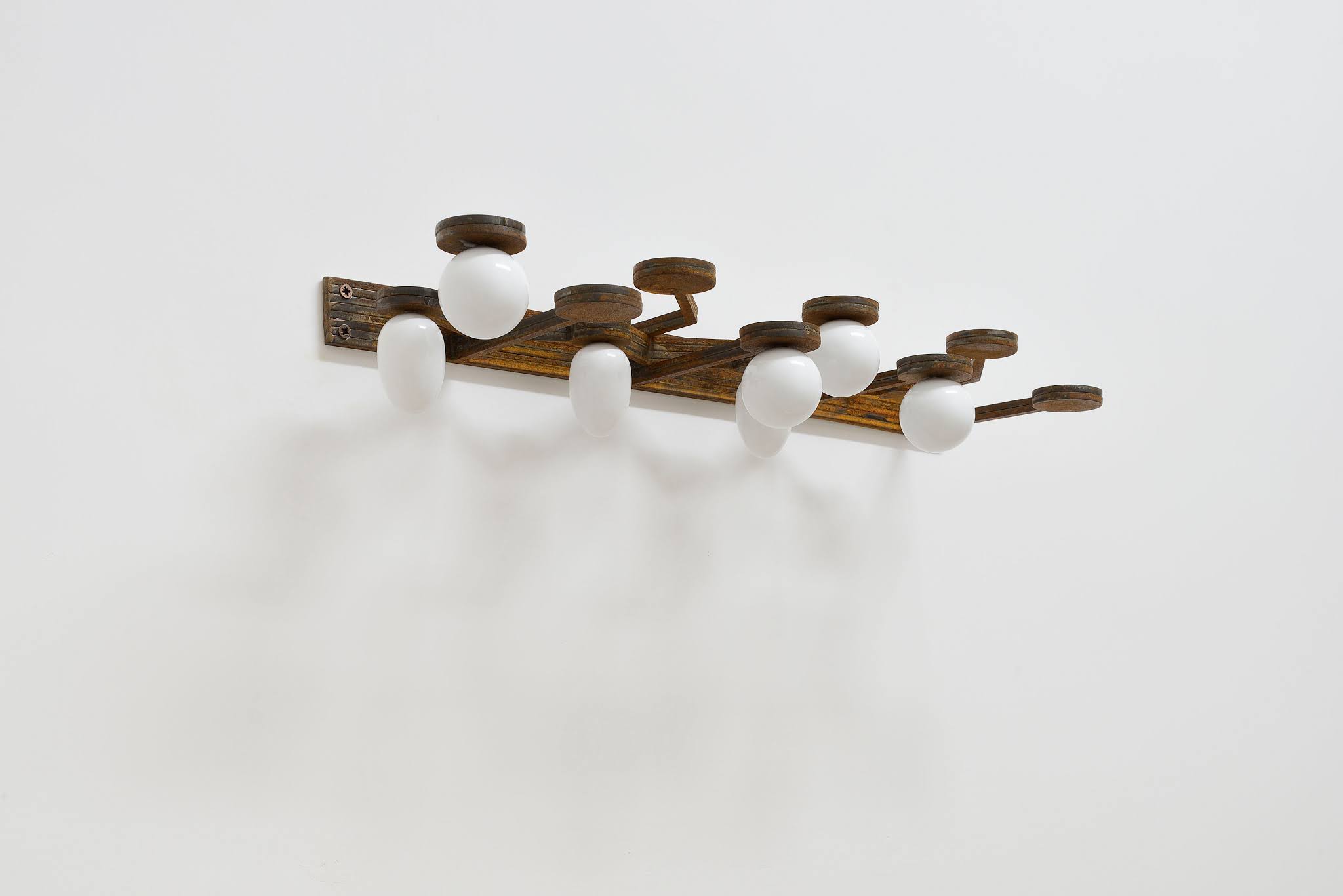 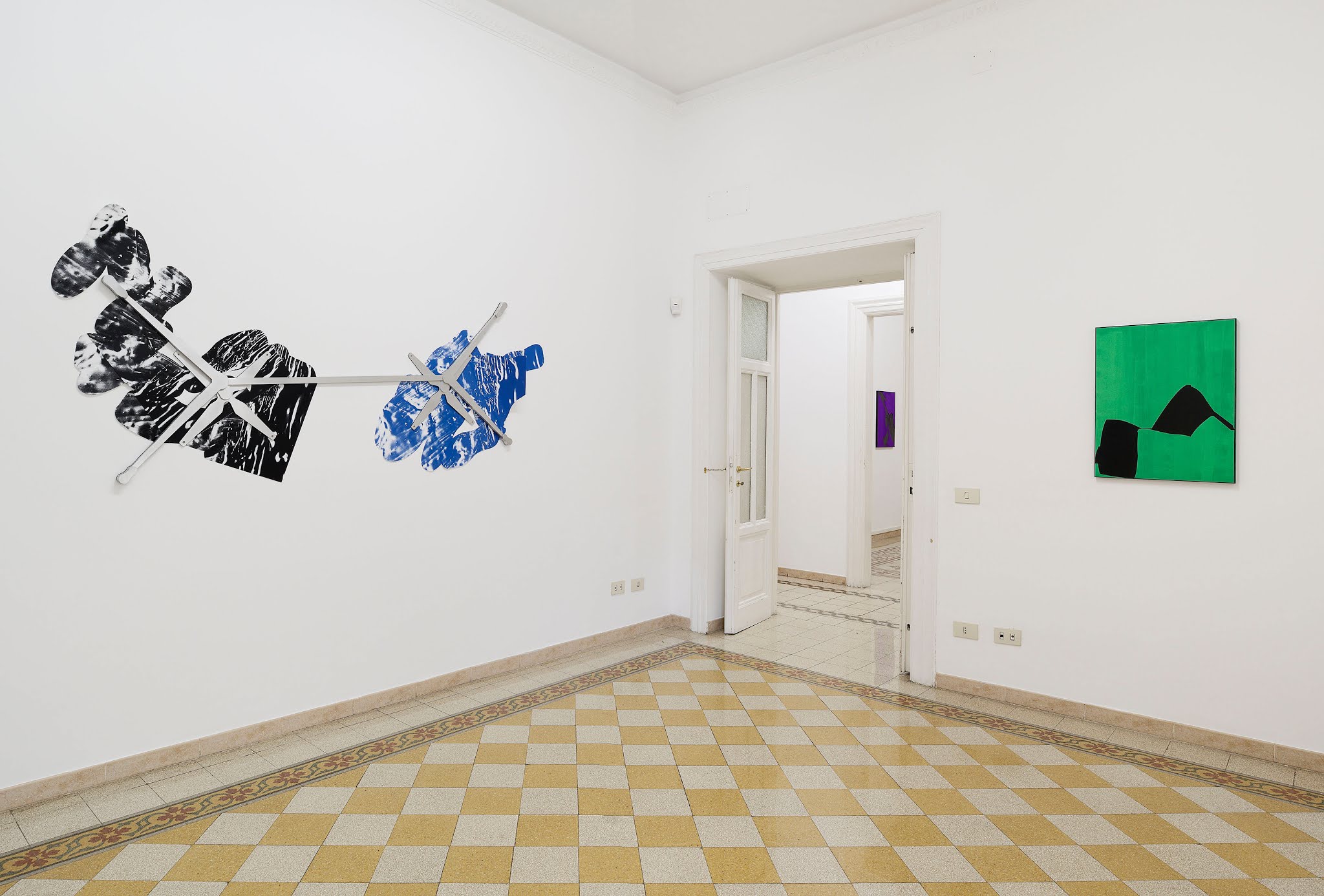 A space where art is exhibited and sold is certainly something physically similar to an office, absorbing and performing some of its functions. So it was in the modern era when some of the best-known galleries in the world were located in buildings populated by other offices. Equally, the exhibition space of BALENO is something like a living space transformed into an office-space for art.

Forcing his hand to these characteristics Andrea Bocca has built this exhibition, distributing a series of works that function as a synthetic scenography for the space as office. Especially looking at the modernist era — a moment of expansion of the tertiary sector and consequent increase in production to satisfy its practical and aesthetic needs — Bocca “furnishes” these rooms with a series of works that are like dysfunctional and ironical versions from the peak of modernist design, represented here by the work of Charles and Ray Eames.

In this way, the three wall works come from alterations of two chairs (Y Chair, M Chair) and a table (CK Table) by the aforementioned American designers. Through a process of transposition from three-dimensions to two-dimensions, these objects have been redesigned, being emptied of their original functions. The aluminum legs have been crushed and nailed to the wall: losing their initial purpose, they have gained that of operating as a kind of vertical paperweight, a tool for blocking paper cutouts to the wall. These forms replace the seat shells or the table top which have now been transformed into enamel stains or, more precisely, photographic reproductions of silk-screen printed colour stains, in a transposition from the material to its reproduction in image.

Another triptych of works (Charles, Ray, Jacques) is linked to the previous series both by the conversion from three to two dimensions and by the evocation of a tactile reference. On three panels in black MDF, painted with gouache in three different tones, Bocca draws silhouettes of shoes, oversized with comparison to the original reference. Among these shadows of shoes (or sinuous lines as they appear now), milled directly into the MDF for a couple of millimetres, two images of cats peep out, as a sugary evocation of the domestic context.

Finally, the last work (Comanda coolooorrrr......) takes up another Eames design icon, the popular Hang it All coat rack (1963). In this case, the artist has made some decisive alterations: the material is now weathering steel, while the structure has been rusted and the shape was “crushed” and was overturned from its original direction. The knobs, which clothes were normally hung on (now in lacquered wood), have been deprived of both colour and, in part, their spherical shape. Installed upside down, it seems as if large drops of white paint were falling from this time-worn structure, deprived of its original function.

Now that the home-office has been “furnished” with the works of Bocca, we should try to understand what lies behind these shapes and these images, which historical and linguistic references have been hung on the walls with so much freedom, and why...

The first two series of works have as their starting point visual, cinematographic and advertising suggestions indicated by the artist himself. A first reference is a number of advertising posters of the Eames chairs photographed from below in order to show the legs and their engineering structure as a quality of the products. Although less evident, another reference is a scene from Jacques Tatì’s film Mon Oncle (1958), where the director and main actor, who plays the role of Monsieur Hulot, inadvertently steps on white paint before he enters the office of a plastics industry for a job interview. His footprints are left almost everywhere, and even in the clumsy attempt to get rid of the paint, they become an indelible sign of an alteration in the cleanliness and efficiency of the office. Through a material and tactile dimension, they mark the intrusion of the human in spaces such as the office and the modernist factory that would like to represent the functionality of a machine made for living and working.

Furthermore, the second series of works finds iconographic references in two different sources: on the one hand, some research photographs by the Eames who analysed the position of shoes placed between chairs and armchairs in the homes of the time; on the other hand, ‘50s and ‘60s Ikea advertising where cats peeped out from among the furniture to make the viewer understand the scale.

Without going into further details, it now seems clear that these sources, together with the aforementioned reference to the Eames coat stand, all lead in the same direction, which was already suggested by the title of the exhibition. In short, Bocca’s simulation-exhibition takes place around the idea of a series of acts of alteration, if not vandalism, of the surfaces and forms of modernist design and the living environment for which they were produced. All the works speak not only of an alteration in a dysfunctional sense of their original form, but of an alteration of the living environment in which they should act as actors well aware of their role. Alteration that passes through at least two directives. One is through the forcing and distortions of three-dimensional forms towards two-dimensionality and the transformation of documentary images into certainly more abstract iconographies. This is the case for what originally were the chairs, tables and hangers of the two American designers, but also for the images that were intended to illustrate domestic life. Crushed to the walls, transformed into rusty skeletons, they become almost abstract silhouettes. These shapes and images speak of a functionality transformed into an illustration, a cartoon, perhaps a parody.

The other alteration is expressed above all through the presence of the tactile and material dimension in the form of bodies, human or animal, and in their presence, which is mostly marked by footprints and stains. The works in this exhibition speak of intrusions and passages that disrupt the impeccable order of interior scenes, they speak of an “alien” presence in the perfect organisation of domestic space. The chairs seen from below seem to allude to a bodily, if not sexual, reference, while paint, cats, silhouettes of the shoes and the threat of other stains dropping from the coatrack speak of a series of bodies and traces that go through the immaculate theatre of these interiors.

In this sense, the reference to Tatì’s film is revealing and opens to a further series of cinematic visions aimed at a critical commentary on the reality of modern life, traversed by the sarcastic and comic vein of the French director. After all, Mon Oncle is the first of a trilogy centred on life in the modern era that will continue with Playtime (1967) and Trafic (1971). With his clumsy, ironic and disenchanted manner, Hulot embodies the extraneousness towards the values of pressing modernity, even through his relationship with these new forms of living. More precisely, “in Mon Oncle there is no solution of continuity between the human world and the world of things” 1 and Hulot engages in a number of duels with the objects of the new modern living and the technology that animates it. Although he is not armed with any iconoclastic or clearly rebellious drive, and does his best to manage the modern world of objects, of living and of working spaces, Hulot cannot avoid leaving traces of his body in these close-up encounters. If, in fact, “more than in any other Tati film, Mon Oncle is filled with references to the dirty and the clean” 2, Hulot is that intruder who is unable to adapt to that reality and leaves footprints of his journey; a resistance of that regime of the living and the organic that modernity would like to remove 3.

If then, the interiors and the objects that inhabit them are crossed by the presence of various “intruders” who leave traces, it could be suggested that the real intruder of this staging is the artist. Through a sort of transfer, Bocca is the paint that leaves stains, the man who abandons his shoes, the cat that crouches among the furniture; in short, he is the materials that penetrate the domestic scenography. Nevertheless, it is the artist himself who takes the liberty of doing what Hulot or perhaps the cat are too shy and polite to do: modify, crush, flatten, hang on the wall those objects normally surrounded by an aura of sacredness. If we then think of the cultural and economic importance that design has, and above all has had, in Italian society, mainly in northern Italy where Bocca comes from, one would think that the artist’s transfers were at least two. In short, through these processes, Bocca stages the substance of an ambiguous and conflictual relationship towards those interior sets and the objects that populate them, and the only way to entertain a relationship with the loved object is through the flirtation of the parody.

1 Roberto Nepoti, Jacques Tati, Il castoro cinema, La Nuova Italia, Firenze 1979, p. 58.
2 Michel Chion, The Films of Jacques Tati, Guernica, Toronto New York Lancaster 1997, p.120.
3 Another anti-hero of the dysfunctional relationship with the modern home is certainly Hrundi V. Bakshi played by Peter Sellers and protagonist of Blake Edwards’ The Party (1968). The character and the film itself draw a sure source of inspiration from the character of Hulot, but above all from the films Mon Oncle and Playtime. See my contribution “Playtime. Yona Friedman, Monsieur Hulot, Hrundi V. Bakshi: alcune storie di liberazione”, in Yona Friedman, curated by Luca Cerizza and Anna Daneri, Charta, Milano 2008.