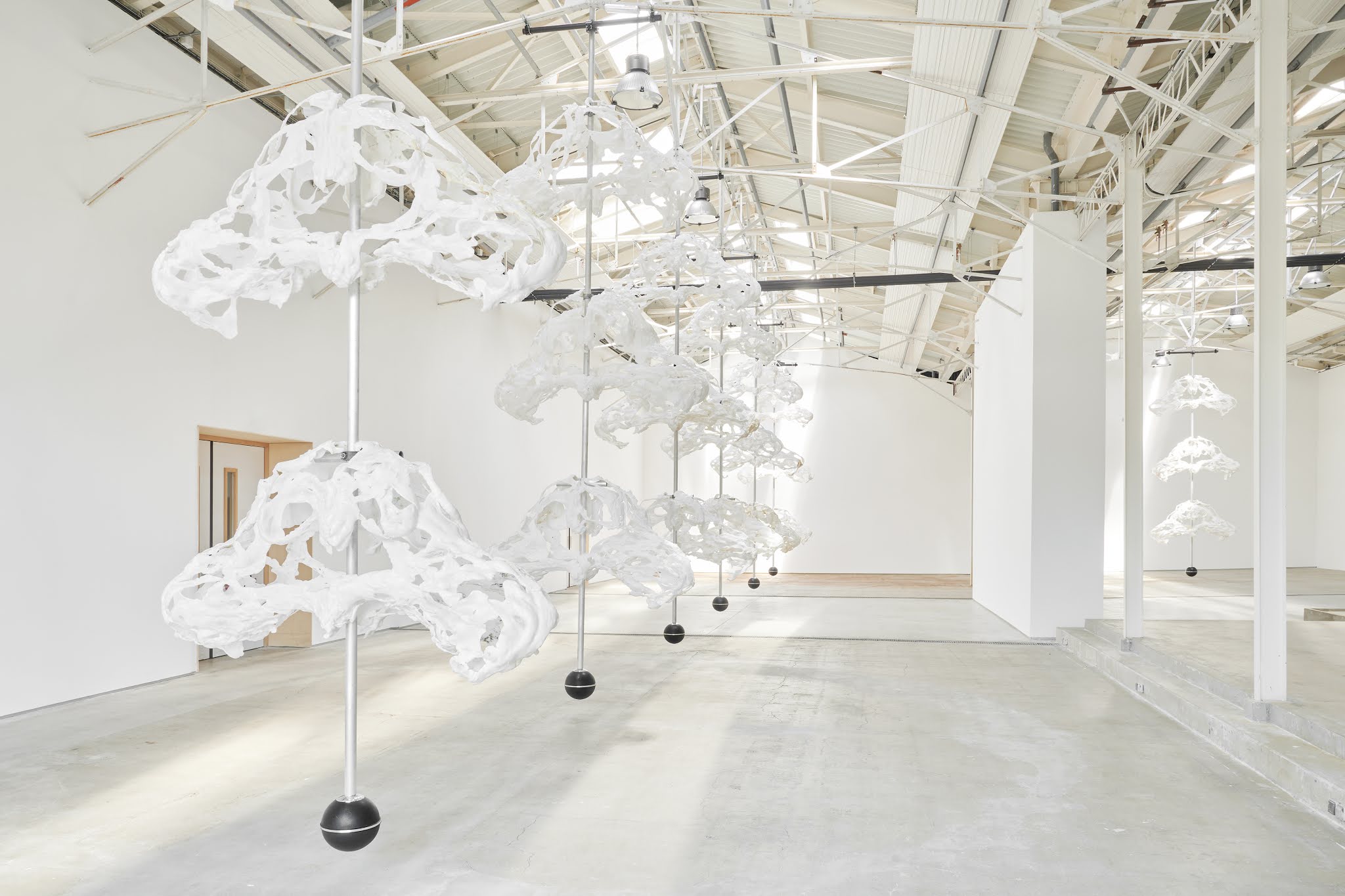 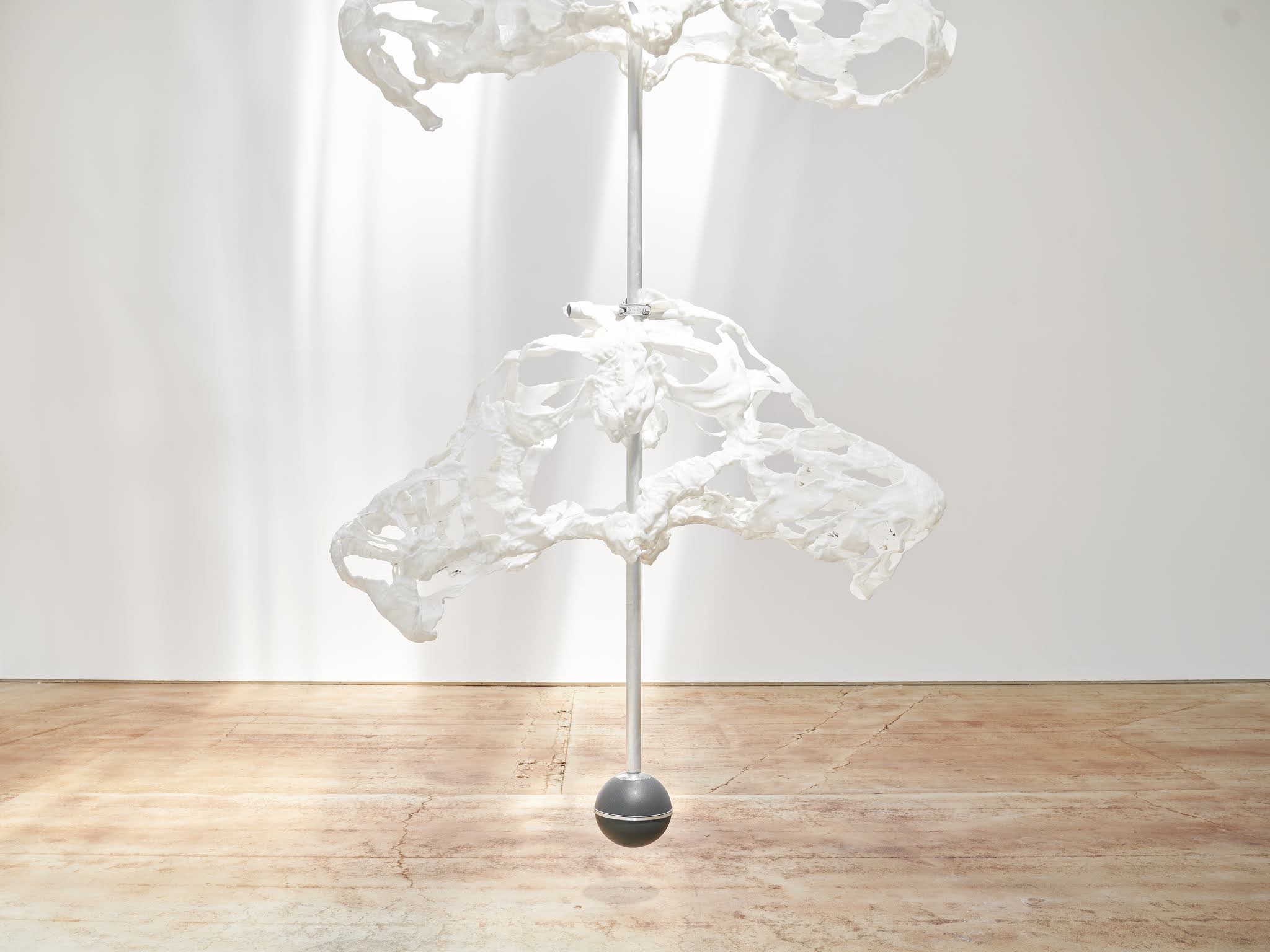 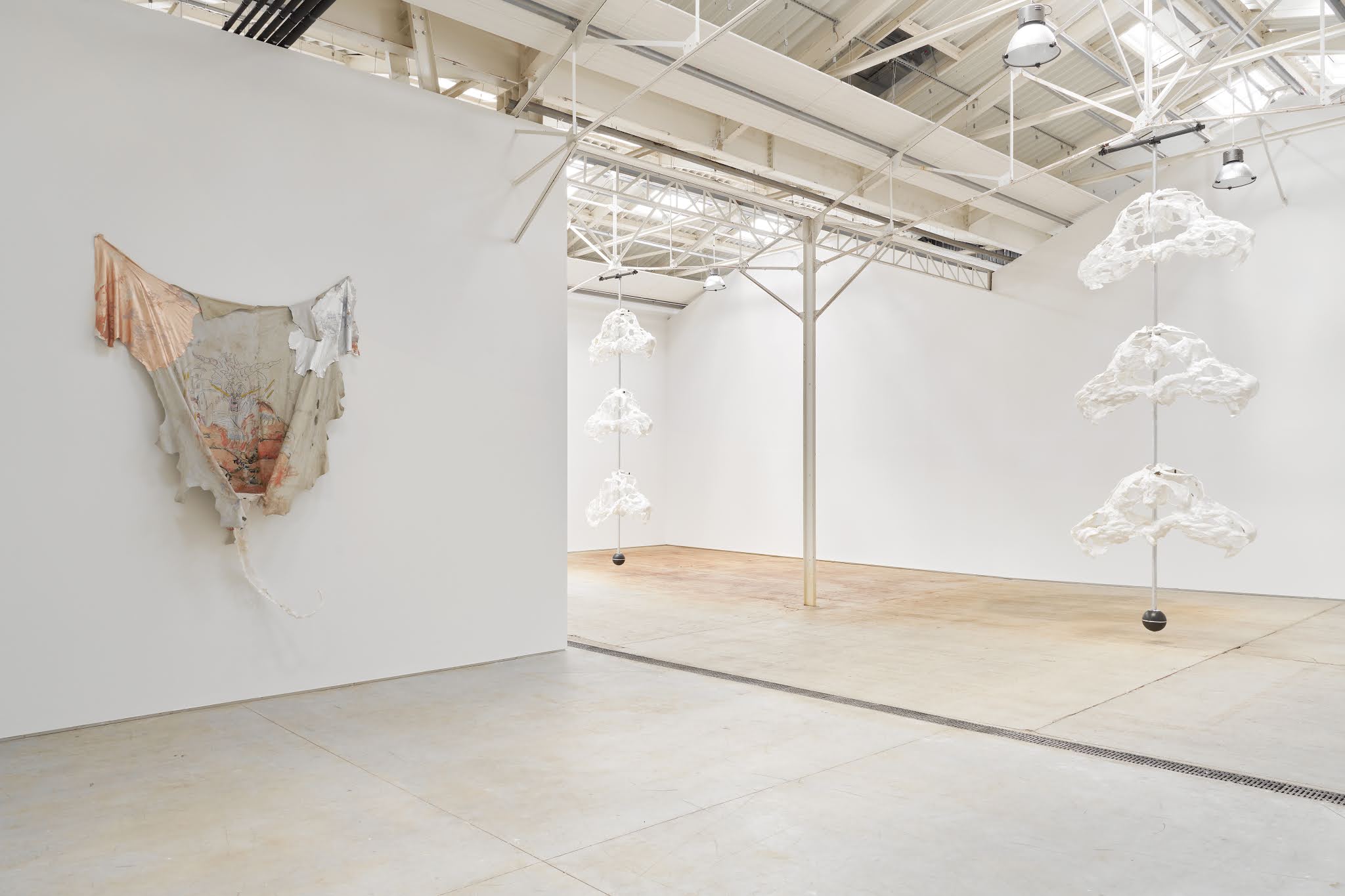 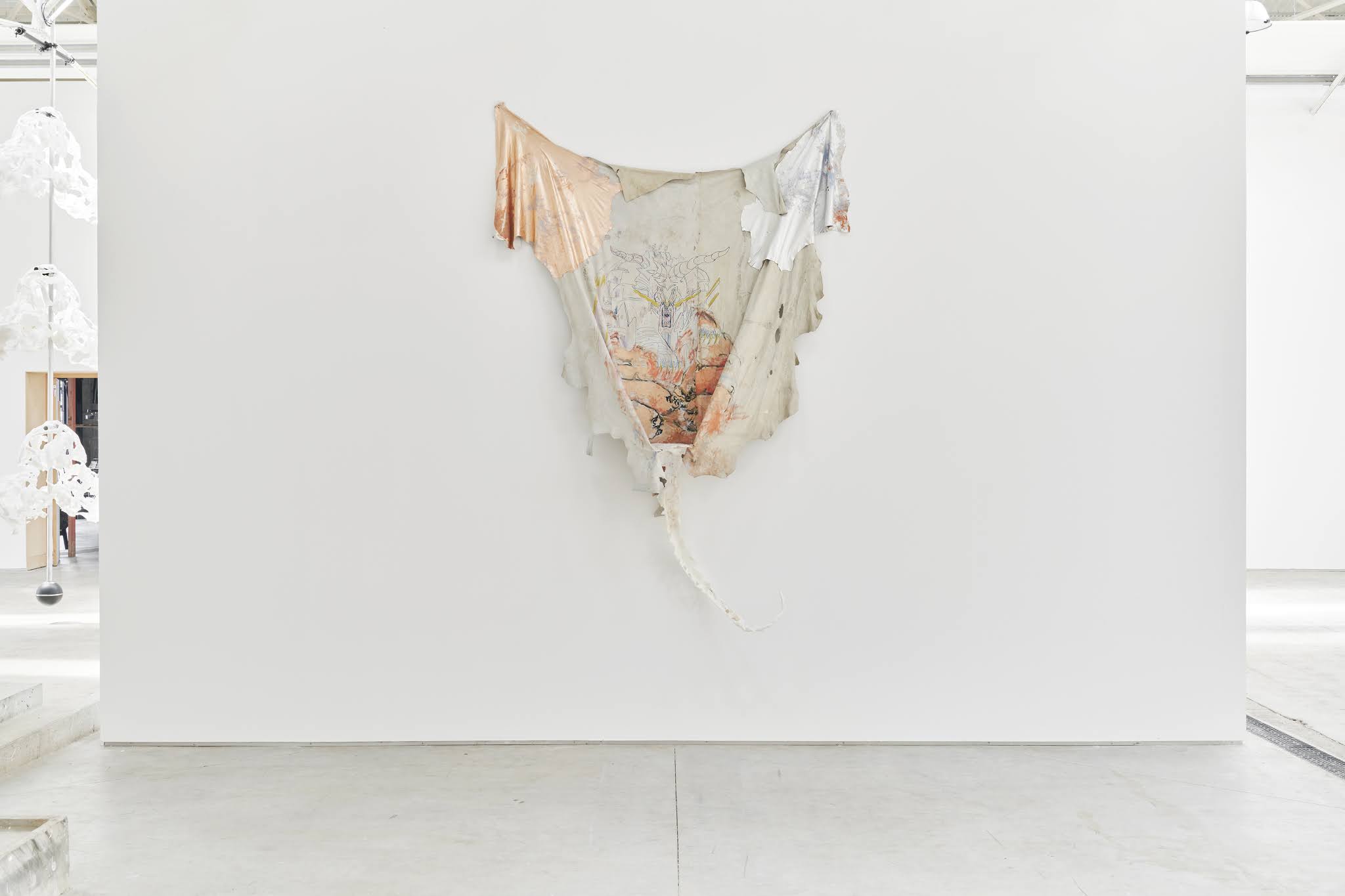 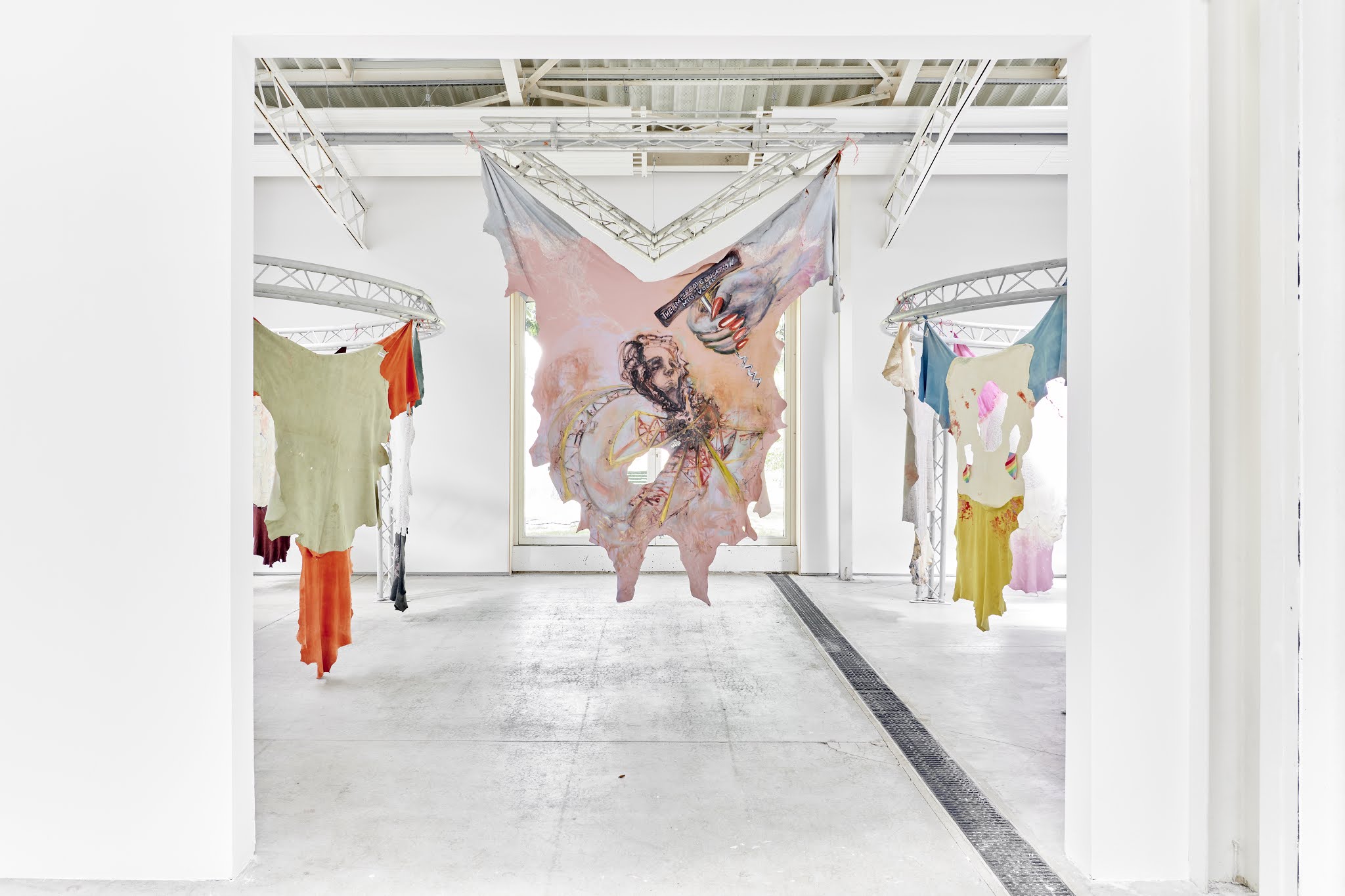 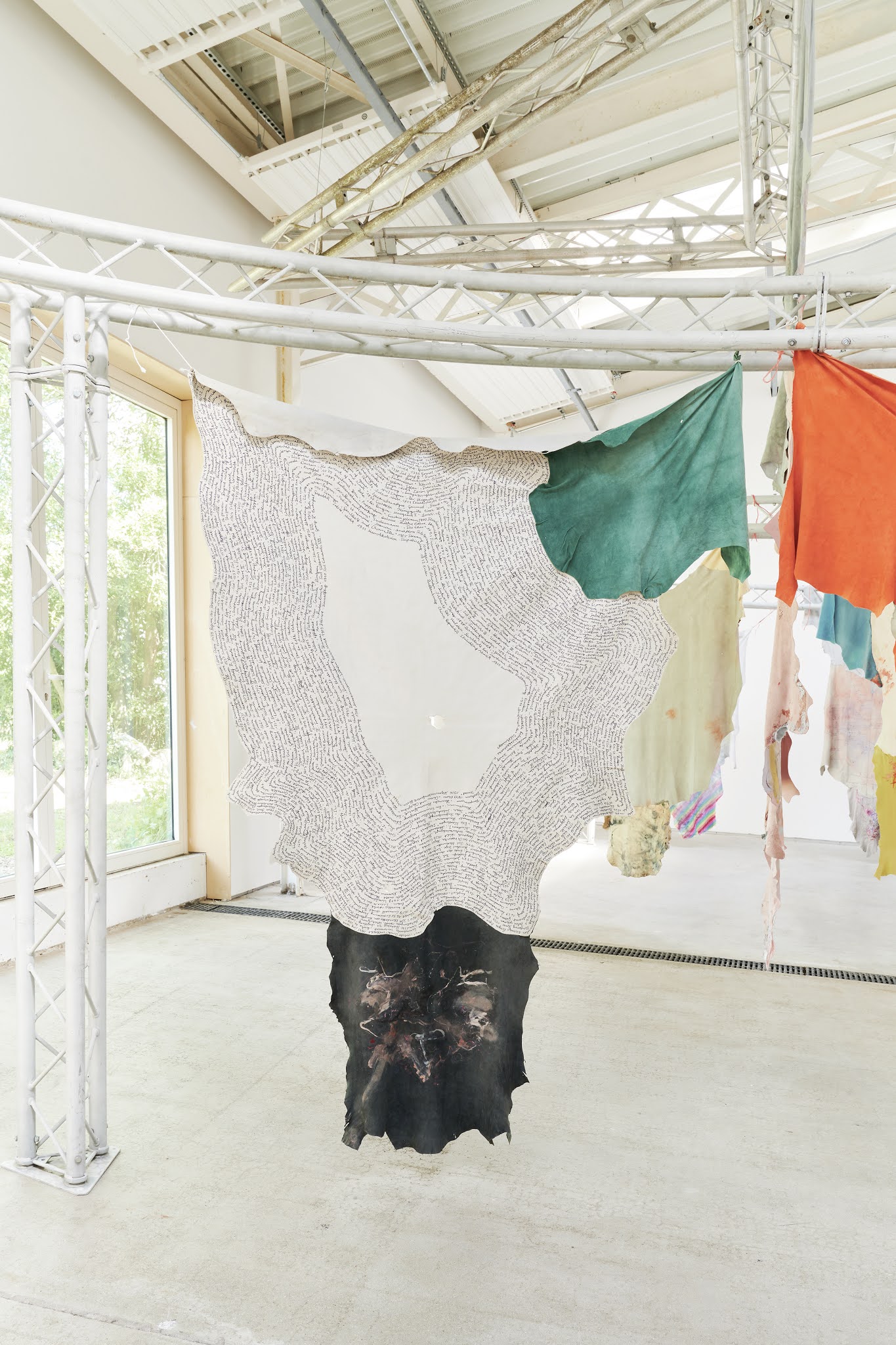 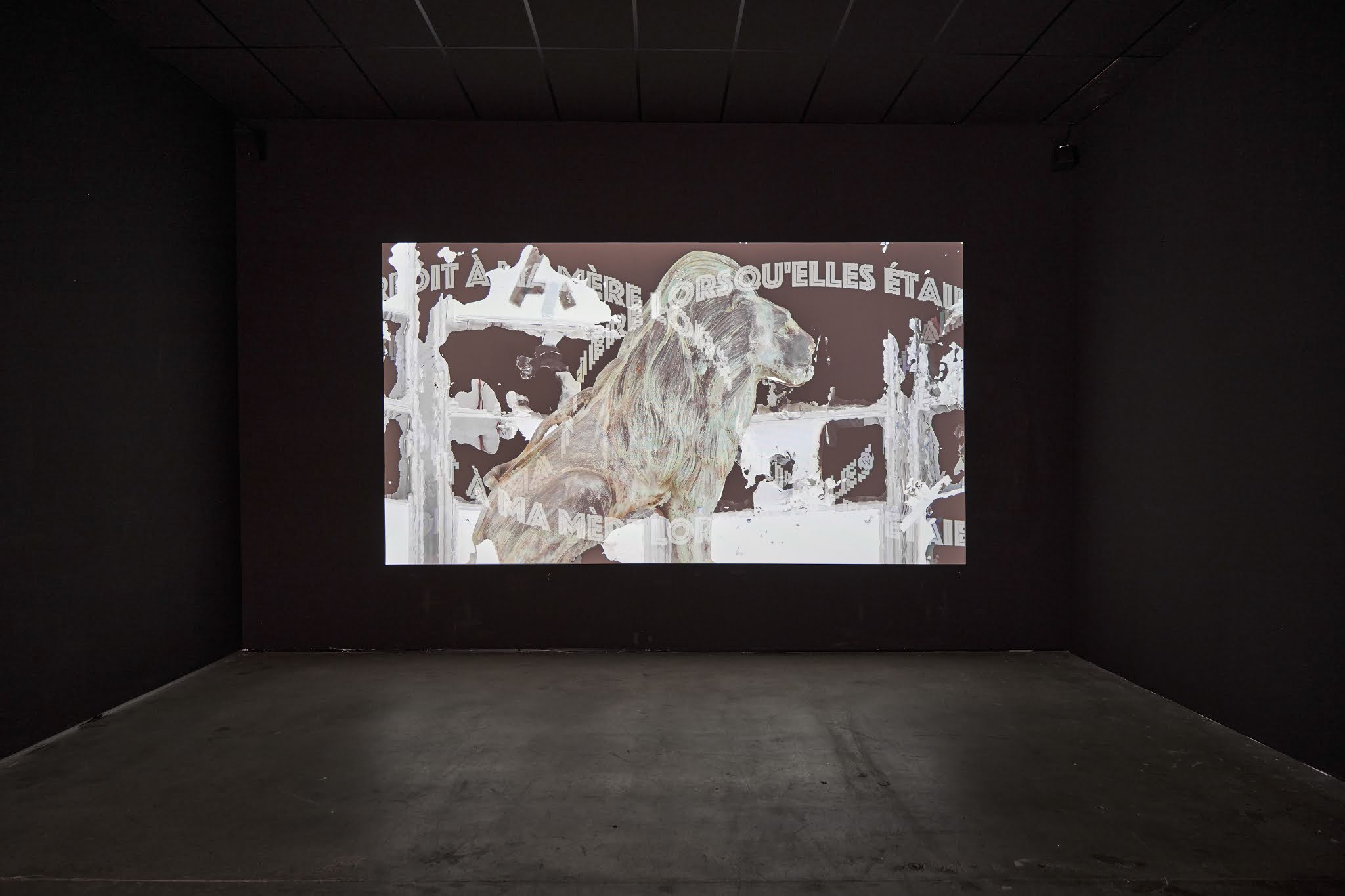 Confort Moderne presents My Appropriation of Her Holy Hollowness, the first institutional solo exhibition in France by Berlin-based artist RaphaelaVogel. Her distinct artistic language interlaces monumental sculptures with paintings on leather or fabric and video-sculptures, from which emanate hypnotic, at times screeching sounds, creating unsettling constellations. Gender, violence, death and humour are explored throughout Vogel’s work and form the basis of her inquiry into the assumed binary relationships between humanity and nature, technology and biology, fantasy and reality.
My Appropriation of Her Holy Hollowness comprises recent and new works across three gallery spaces. A new series of seven large-scale sound sculptures, which gives the exhibition its name, dominates the central space. Casts of lions made of polyurethane are mounted on metallic poles, fixed and suspended in rows from the ceiling. Round-shaped speakers adorn the tips of the sculptures’ tails and hover tentatively above the floor. They emit the soft tune of a German song, the first from Austrian romantic composer Franz Schubert’s series Winter Journey titled ‘Good Night’ (1828) that deals with the pain of lost love. Played and sung by Vogel herself, the song’s lyrics, originally written by German poet Wilhelm Müller, are replaced by extracts taken from angrily written letters exchanged by the artist with a former lover whereby both quarrel over the claim and access to cultural spaces following their separation.
The installation becomes an intimate biographical portrait, a melancholic elegiac musical score presented in form through the rigid regularity both of the sculptures that follows the rhythm of the sound and of the speakers that act as notes. The traditional symbolism of power and masculinity associated with the lion is abstracted through the porous drip of the casting process, and further undermined by the sound of the artist’ voice which permeates the space. Hybrid, skeletal forms emerge and serve as a macabre reminder of the violent mechanisation of the farming industry. It also offers a reflection on the disintegration of the today’s socio-political system, which Schubert addresses metaphorically in his Winter Journey series within the context of 19th century Germany.
As the sound ebbs and flows throughout the gallery spaces, it serves as the score to a film presented silently in an adjoining room. This new work presents itself as a baroque yet sombre collage of kaleidoscopic imagery and text, the latter transcribing the lyrics heard throughout gallery spaces. Filmed in a circular room filled with cameras, the imagery echoes the formal hollowness, as stated in the title, of the lions presented in the gallery. A new painting on leather adorned with a skeletal tail titled Defenders of the Faith (2021) is presented on a back wall in the main space. Referencing both art history and popular culture – namely a 1904 painting by Adolf Mossa titled Circé and Judas Priest’s album cover Defenders of the Faith from 1984 – its title offers a humorous defence of art’s role within society.
It echoes the hybrid forms and violent quality of the main installation and creates a formal dialogue with a recent installation titled The (Missed) Education of Miss Vogel, 2021 presented in the back gallery. Seventeen leather paintings hang like animal cadavers in a slaughterhouse from two circular metallic structures. The installation creates a complex rhizomatic mind map of the artist’ own interests and references spanning music, literature, philosophy and popular culture from Karl Marx and Pierre Bourdieu, to dressage and jazz music. The work addresses how – Eurocentric – canonical systems of knowledge are created and contribute to the formation of subjectivity. In echoing the aesthetic language of so-called ‘Outsider Art’, such systems are questioned and undermined.
A tension is formed, creating a dizzying landscape through a play of scale and materiality, circling between opulence and scarcity, a holy hollowness, that serves to reflect on the relationship between the personal and universal, the symbolic and science, the reified and mass production.
Tags Daily Lazy Exhibition, Juliette Desorgues, Le Confort Moderne, My Appropriation of Her Hoæly Hollowness, Poitiers, Raphaela Vogel, solo exhibition
Newer Post Older Post Home