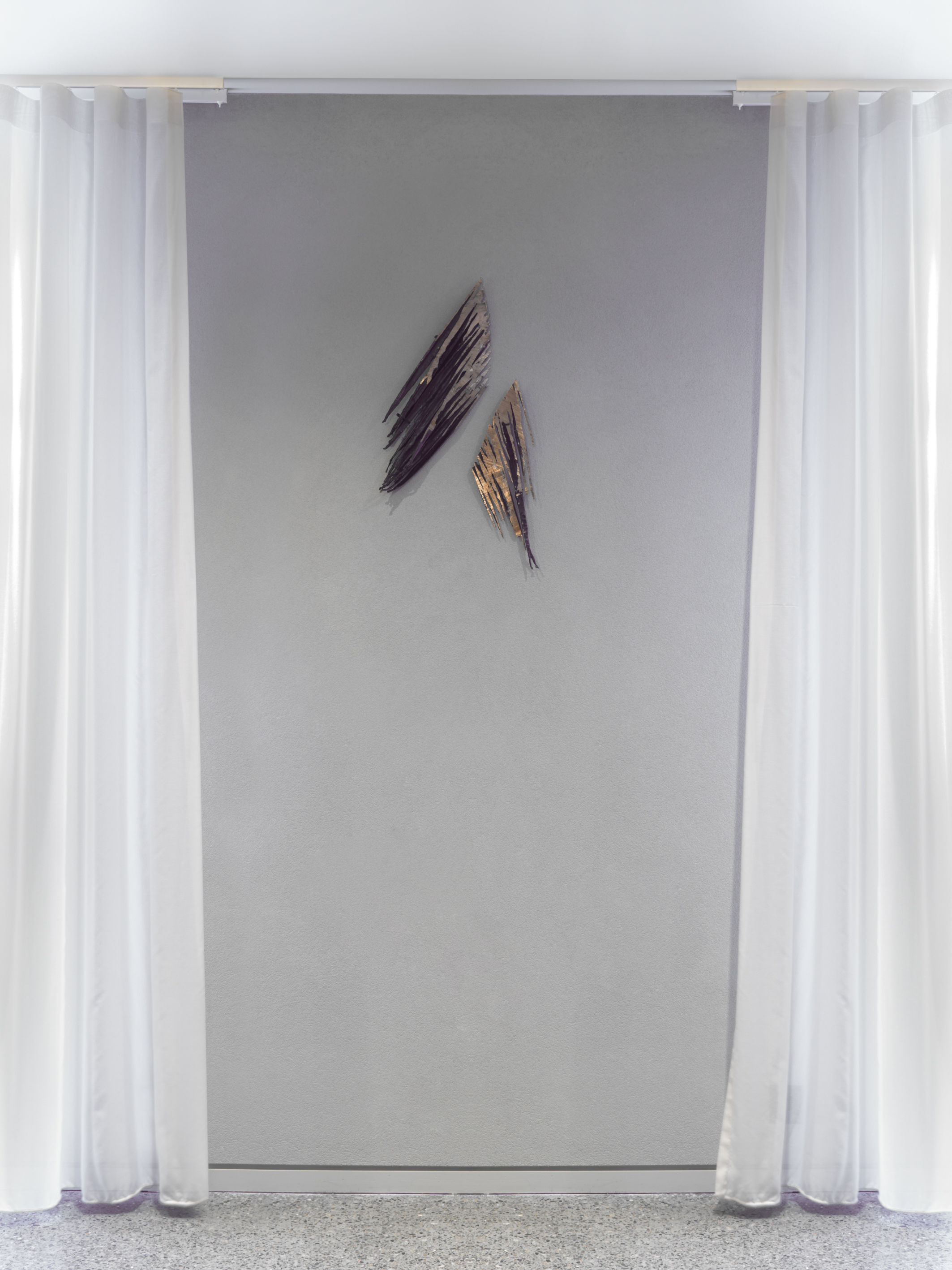 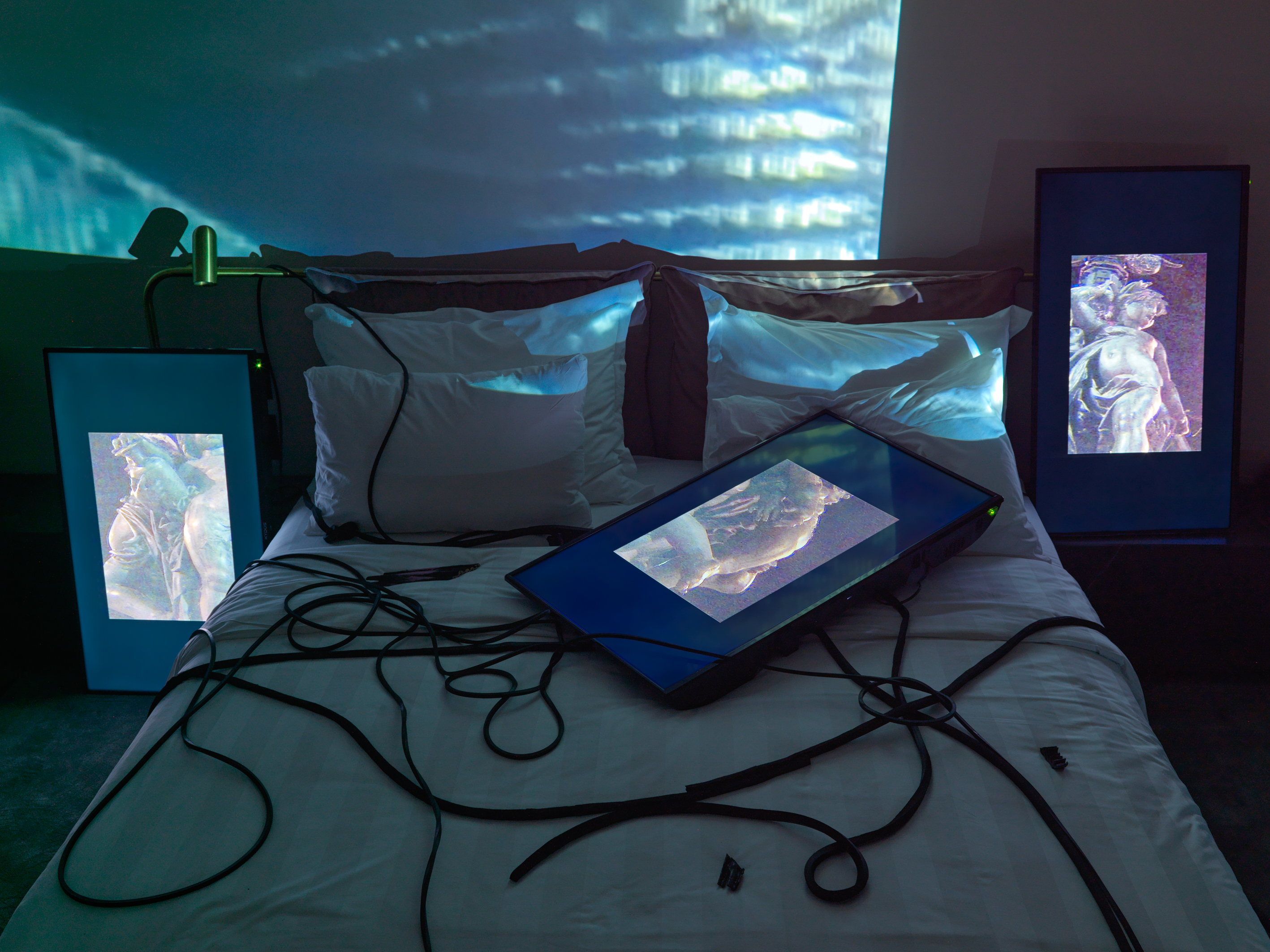 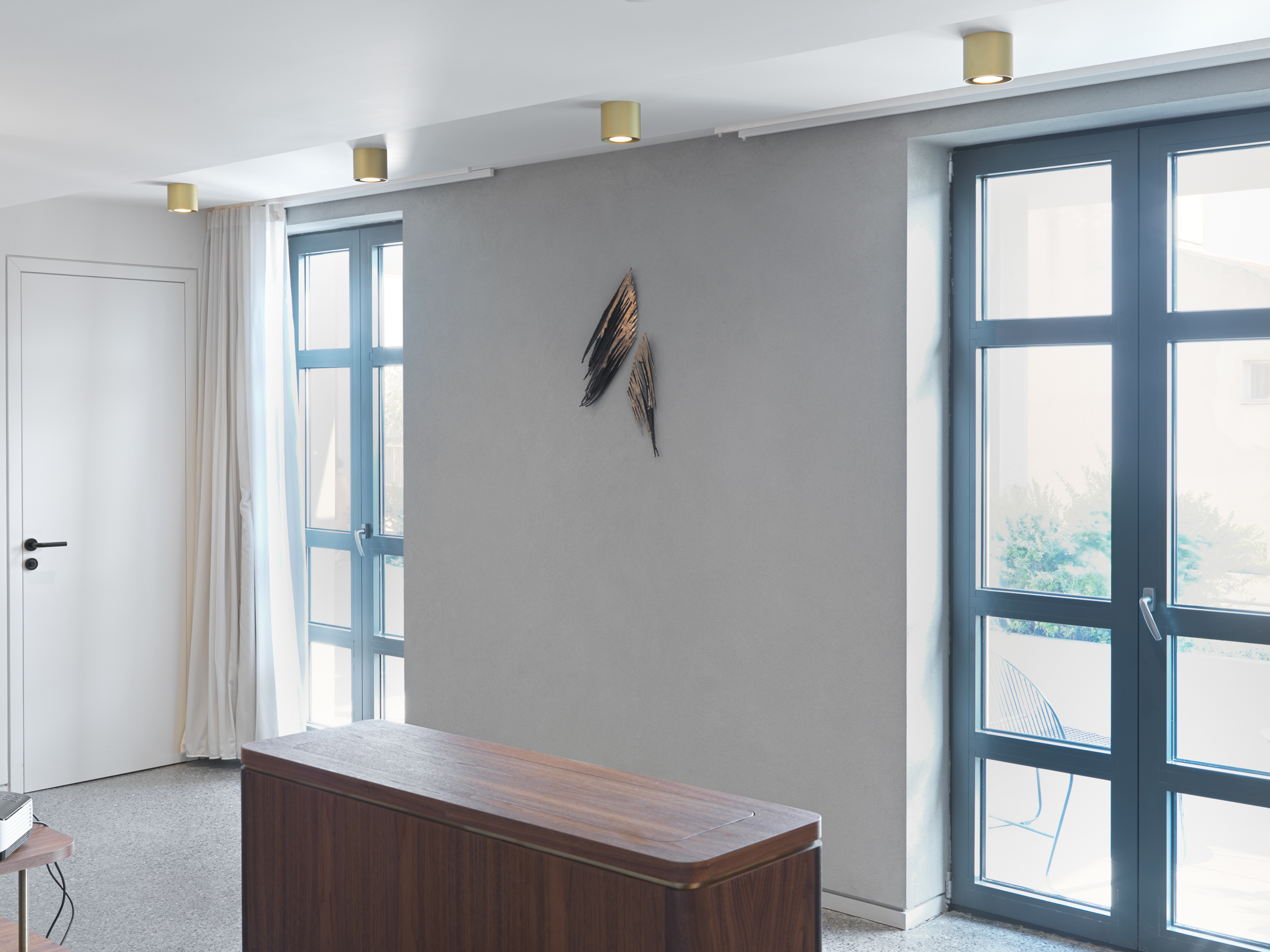 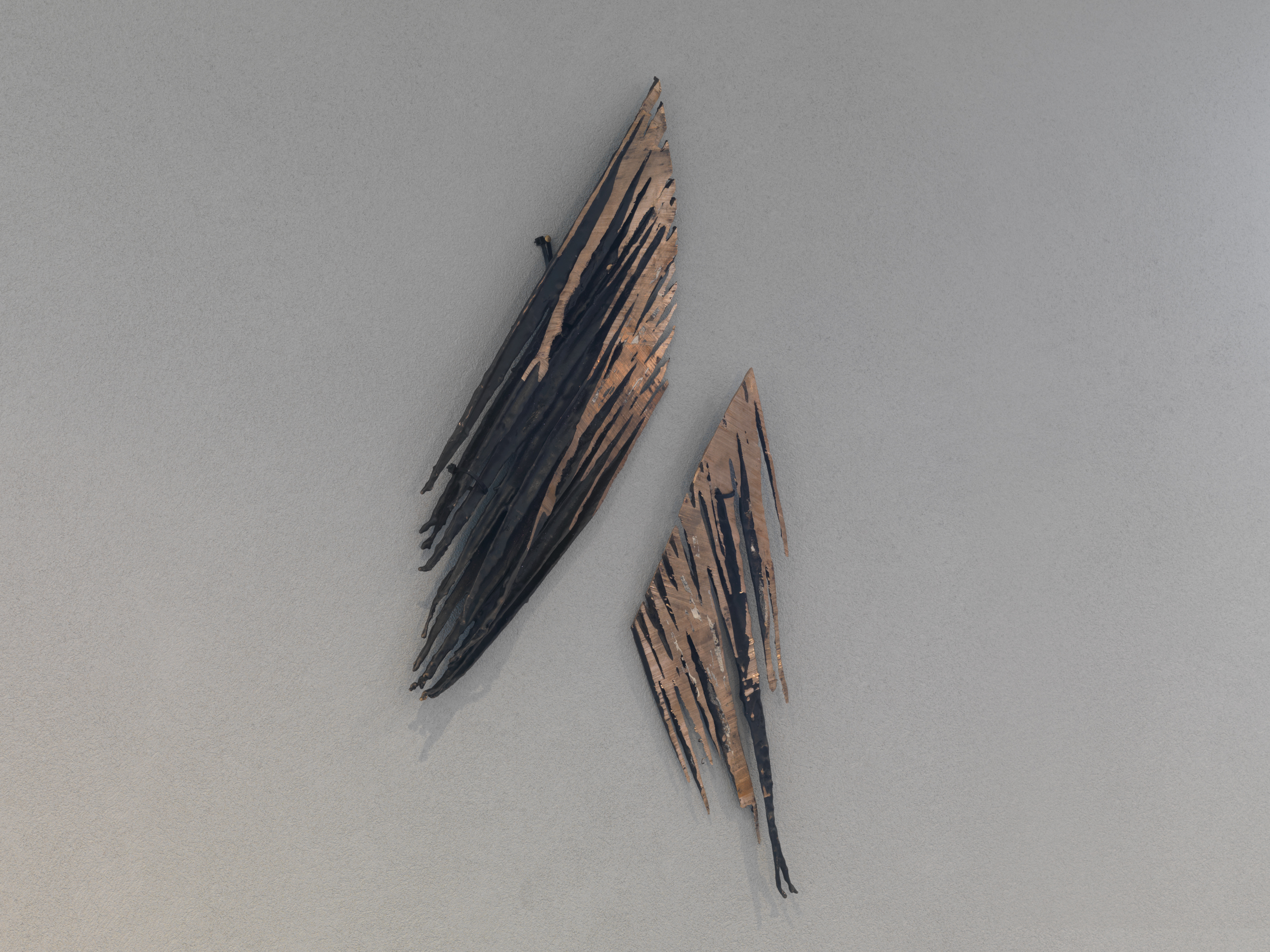 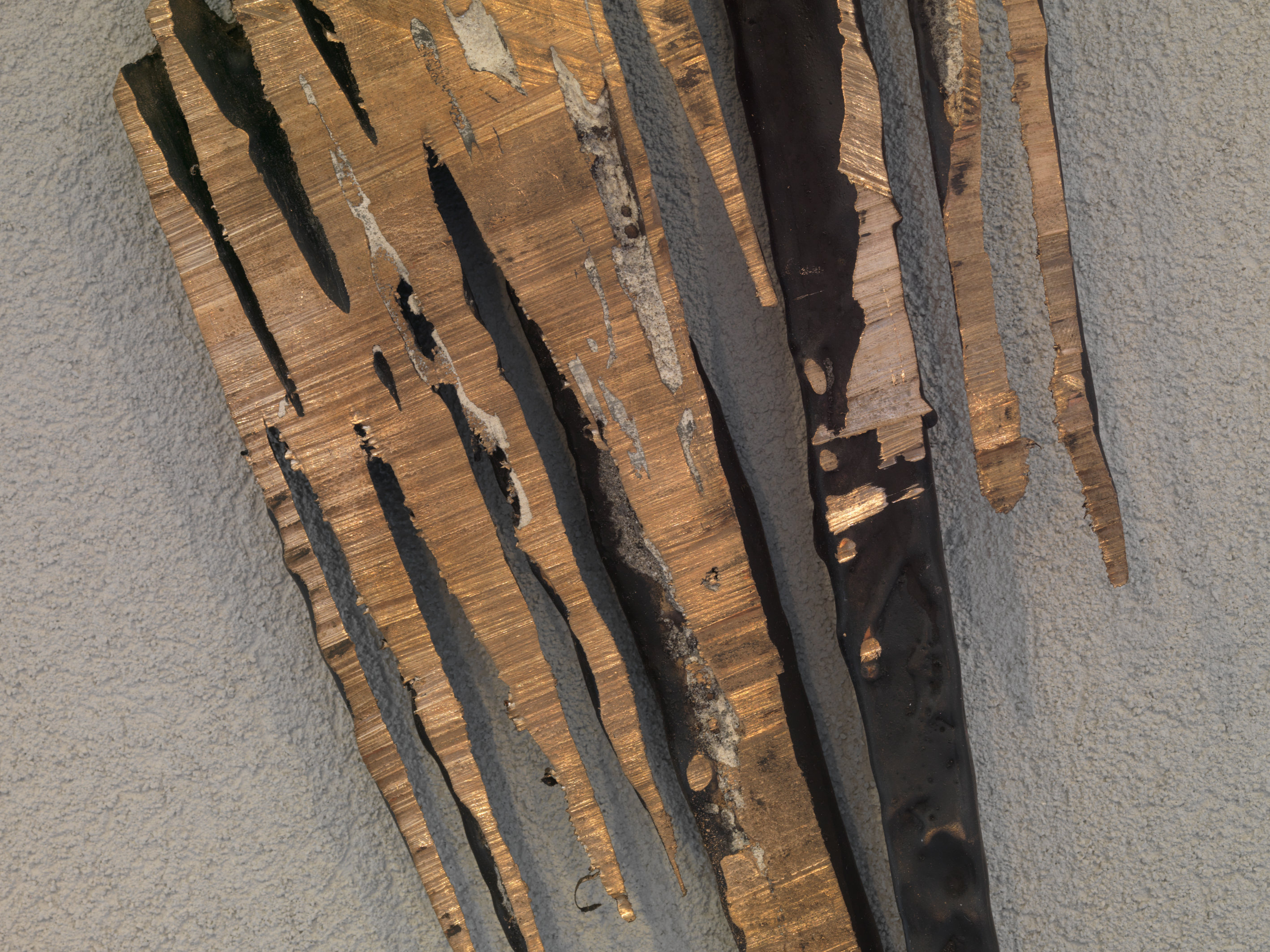 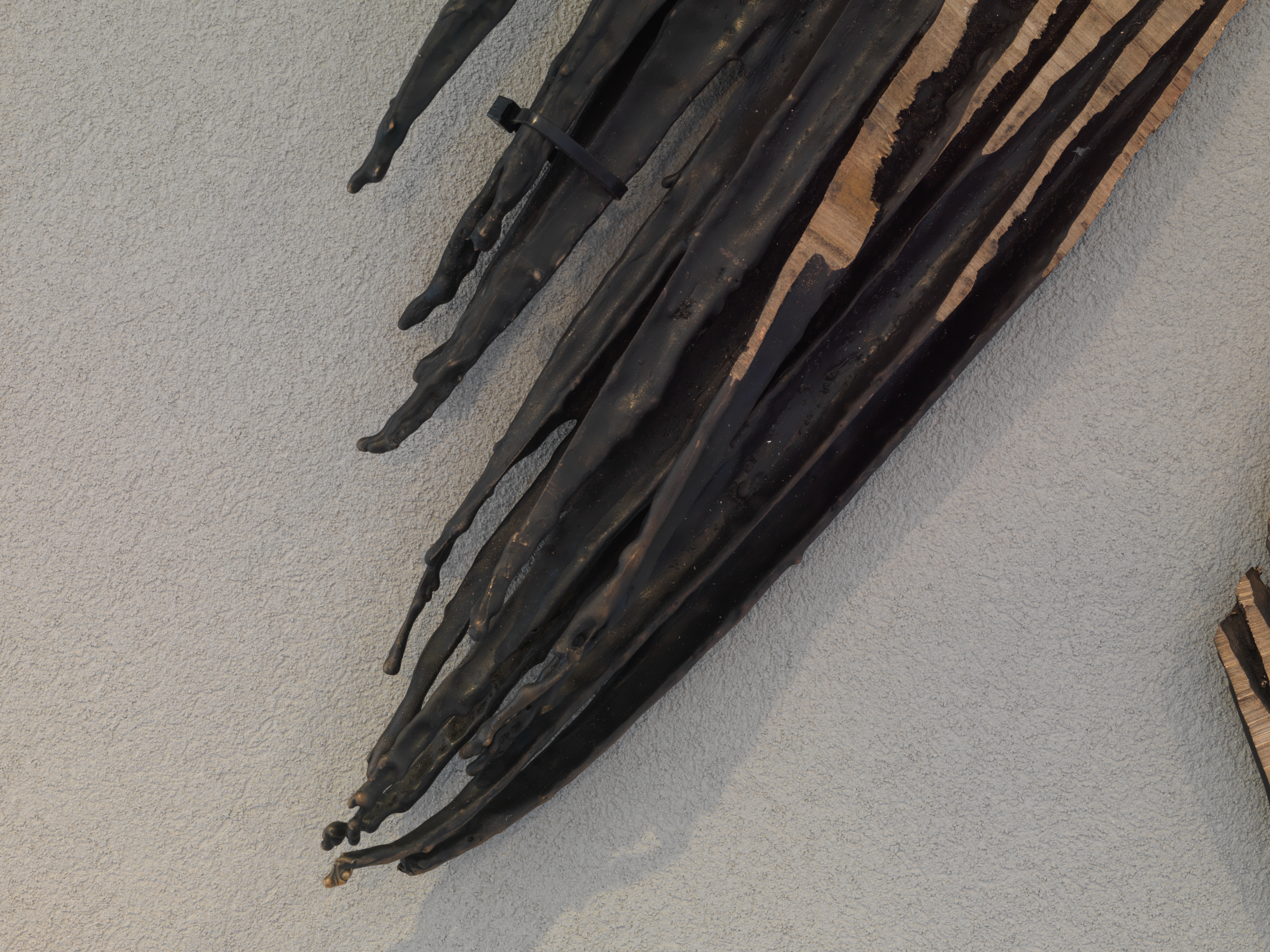 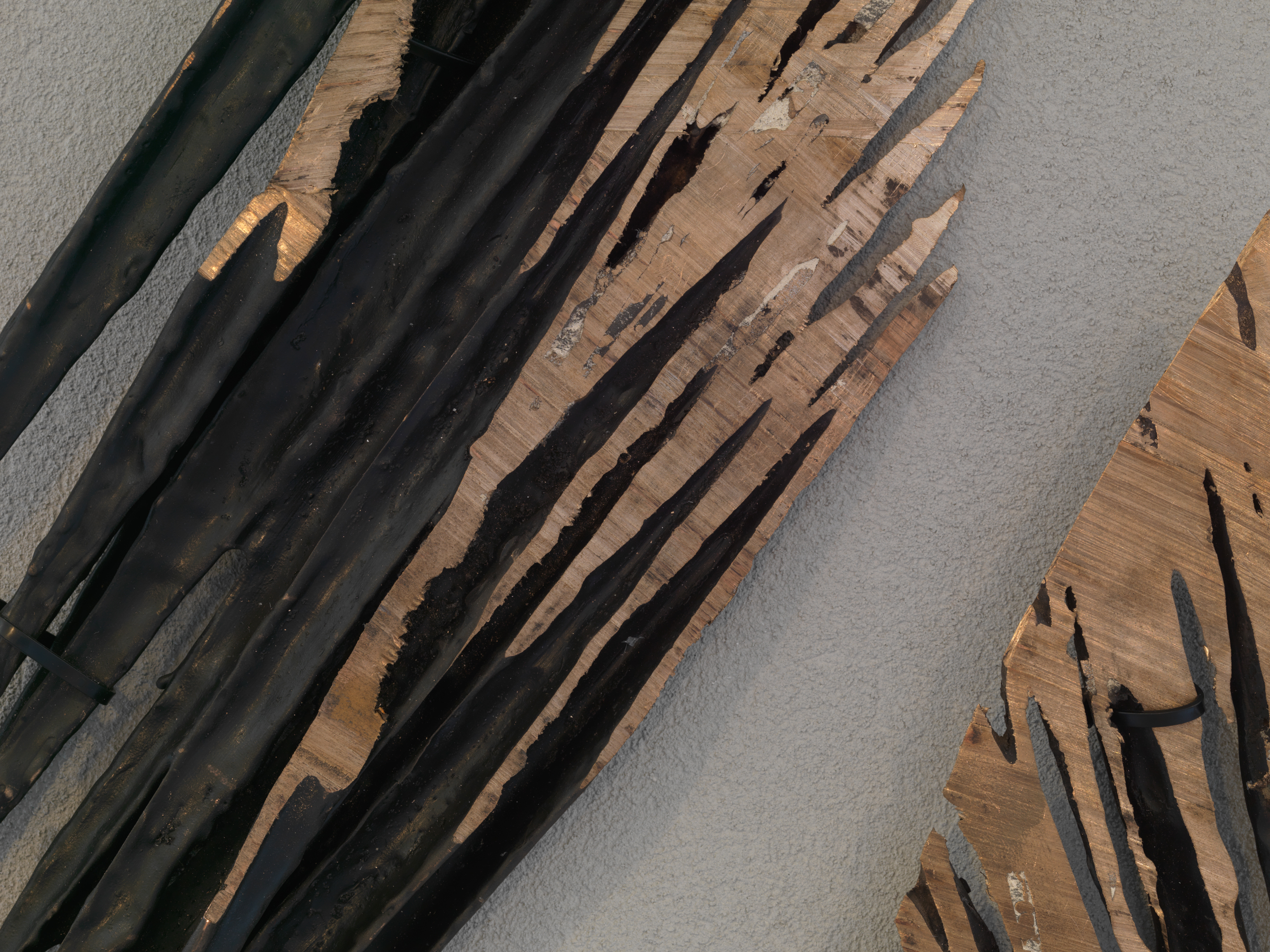 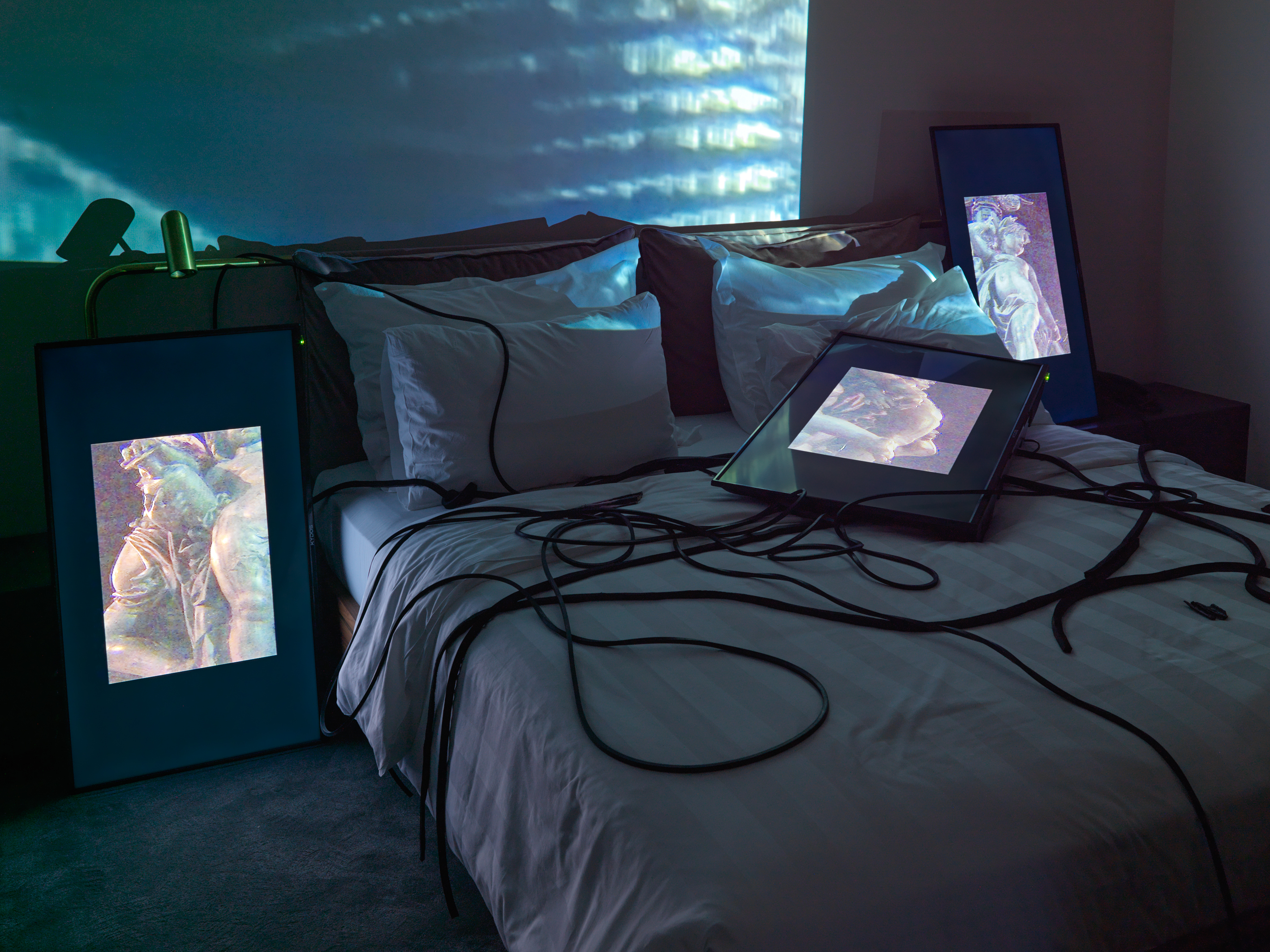 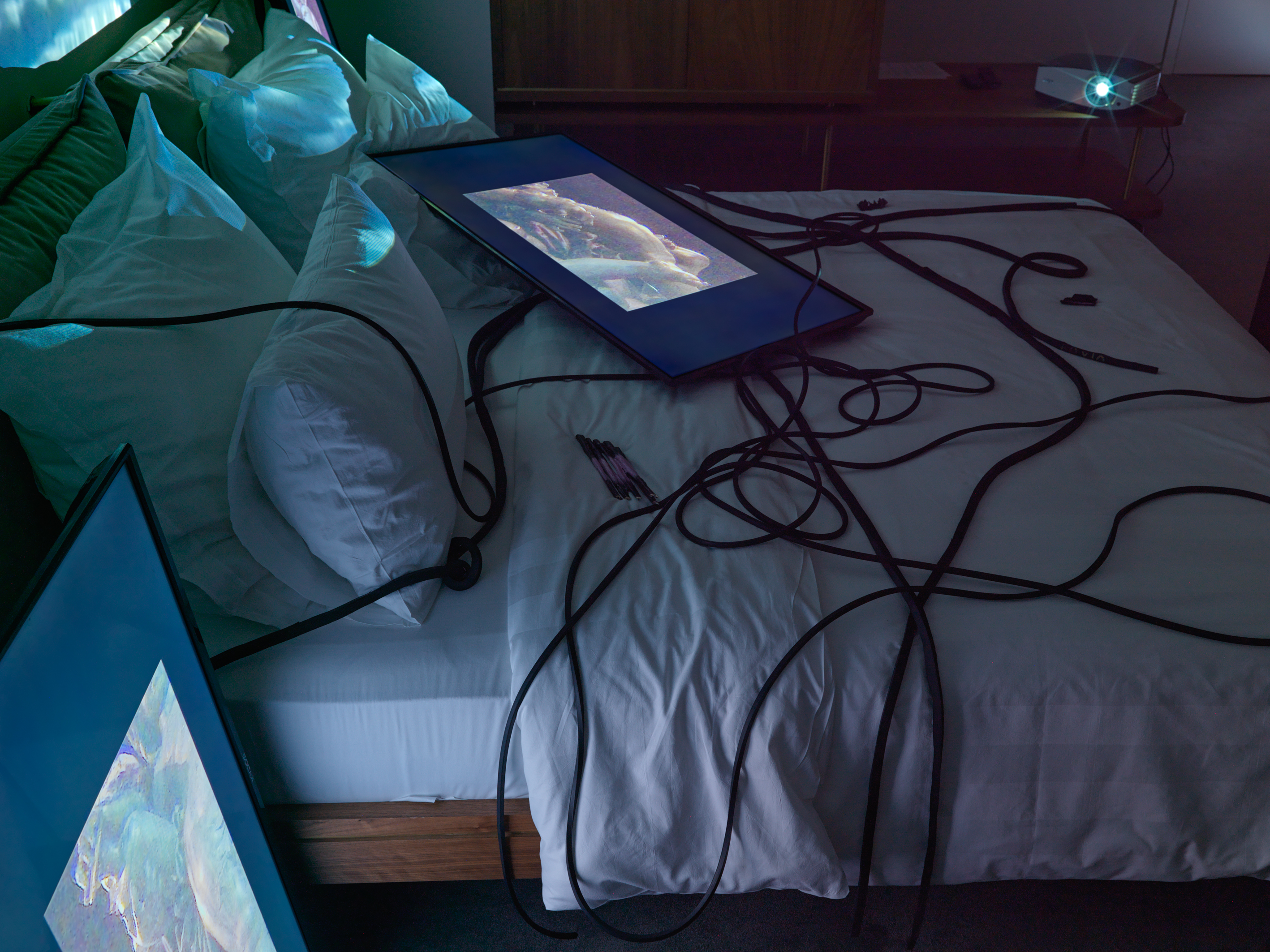 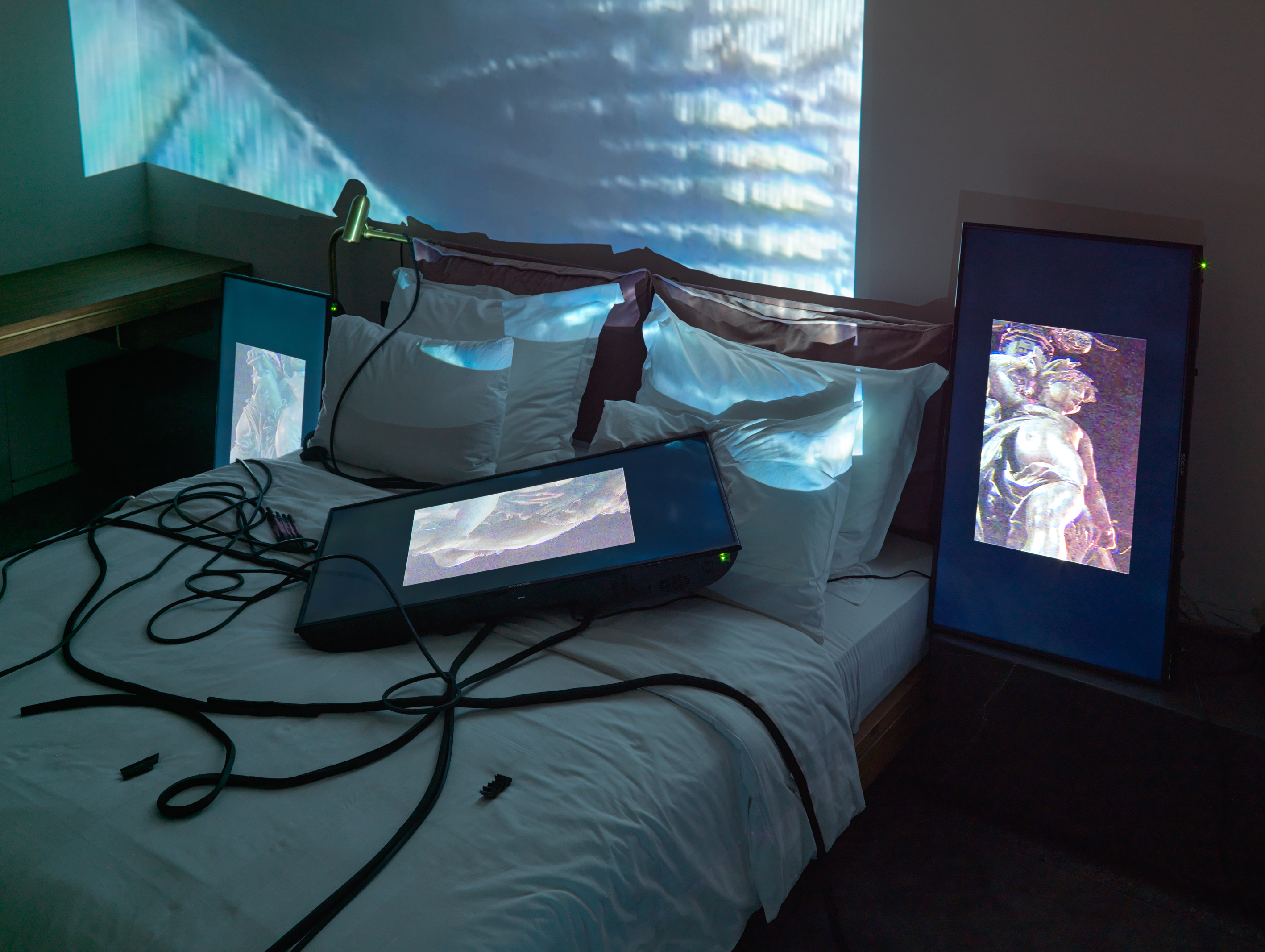 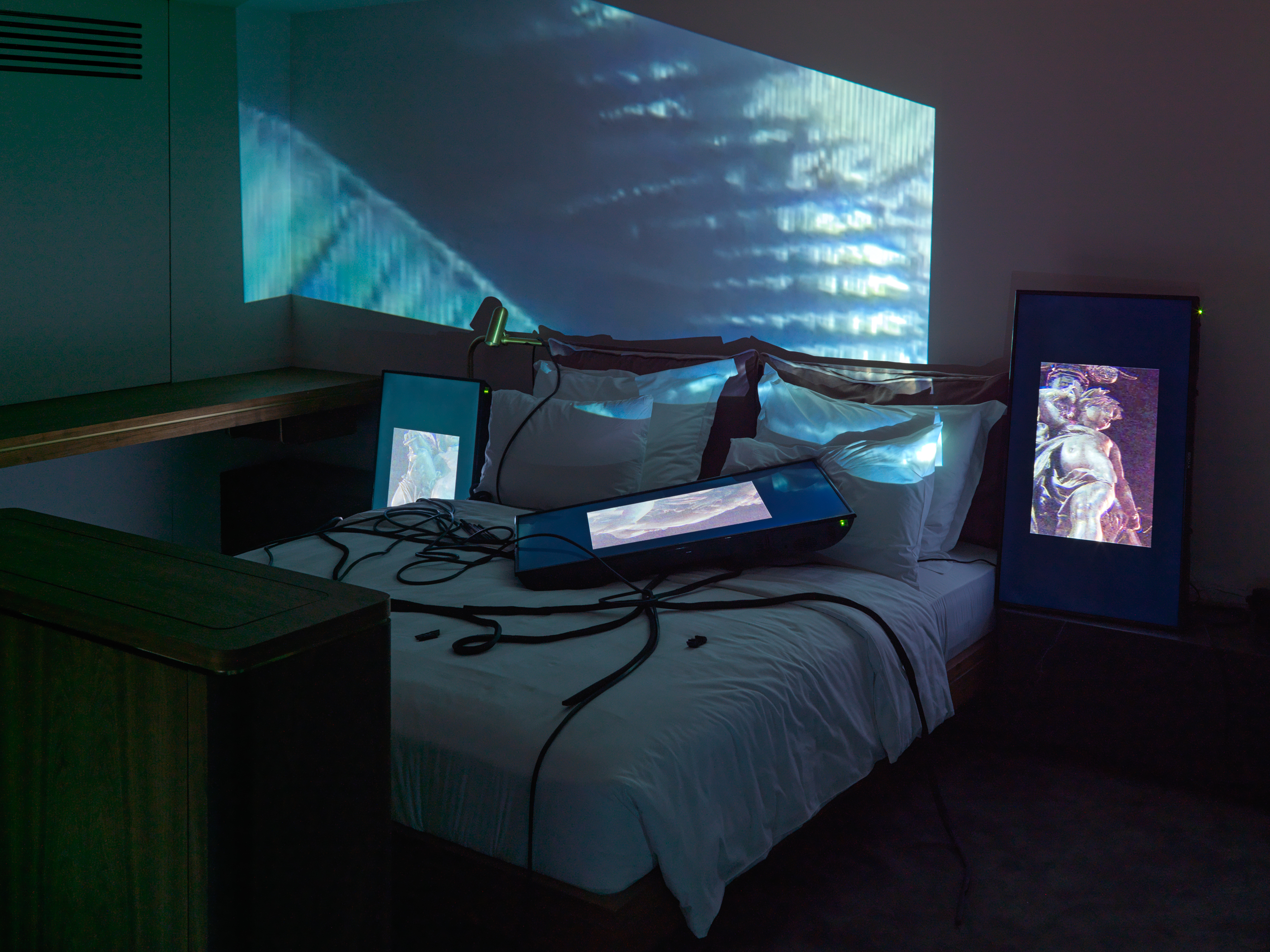 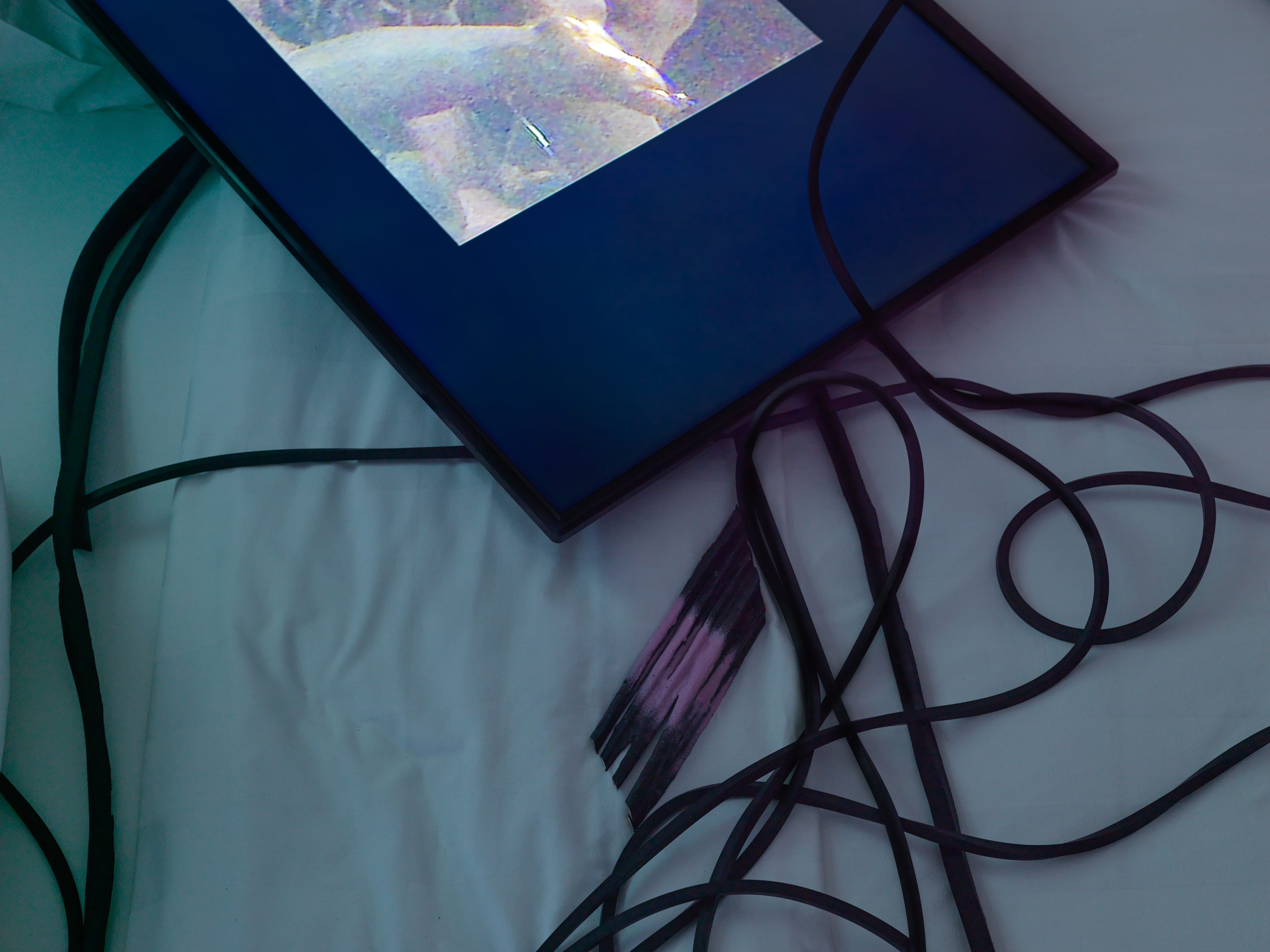 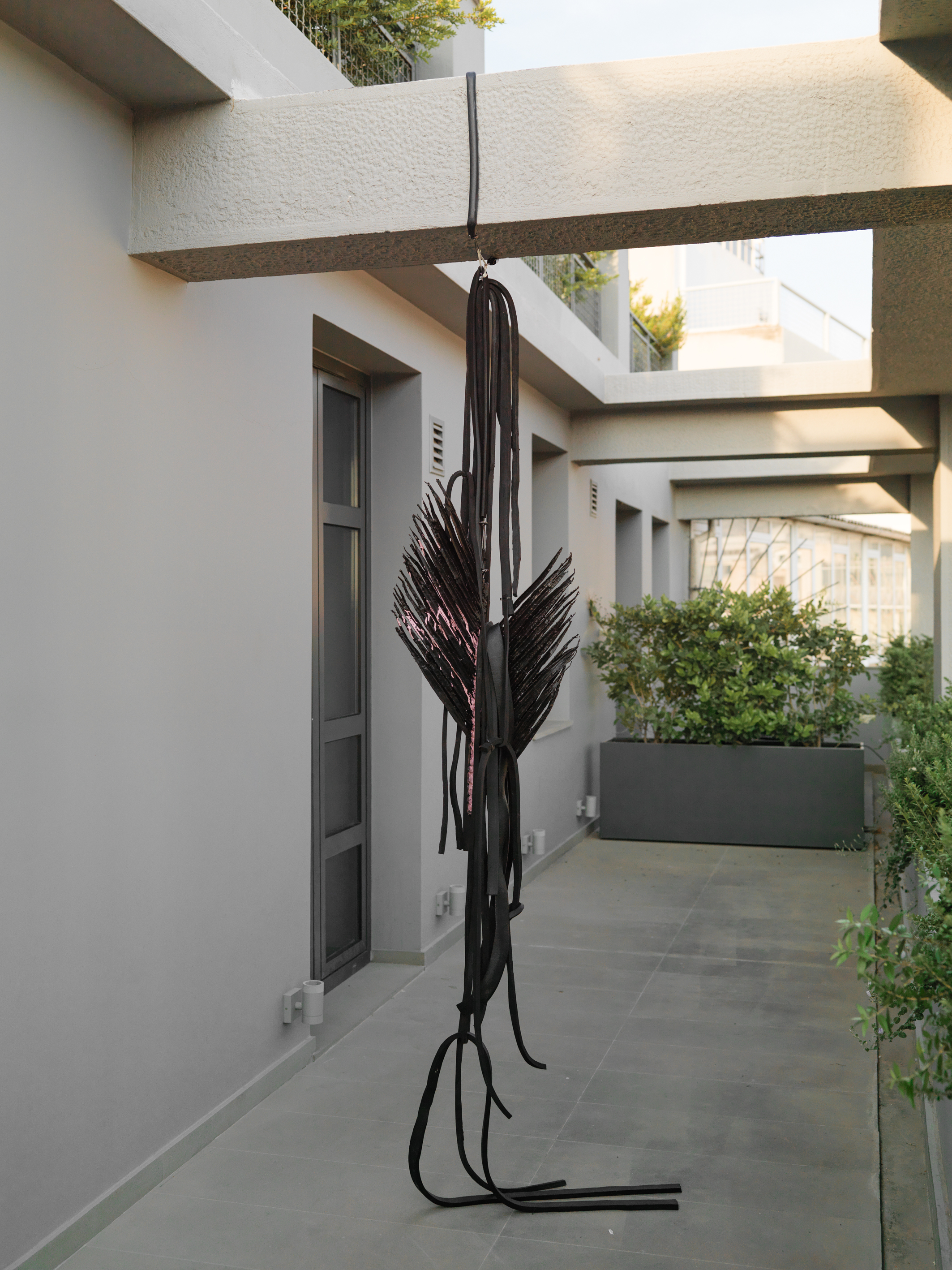 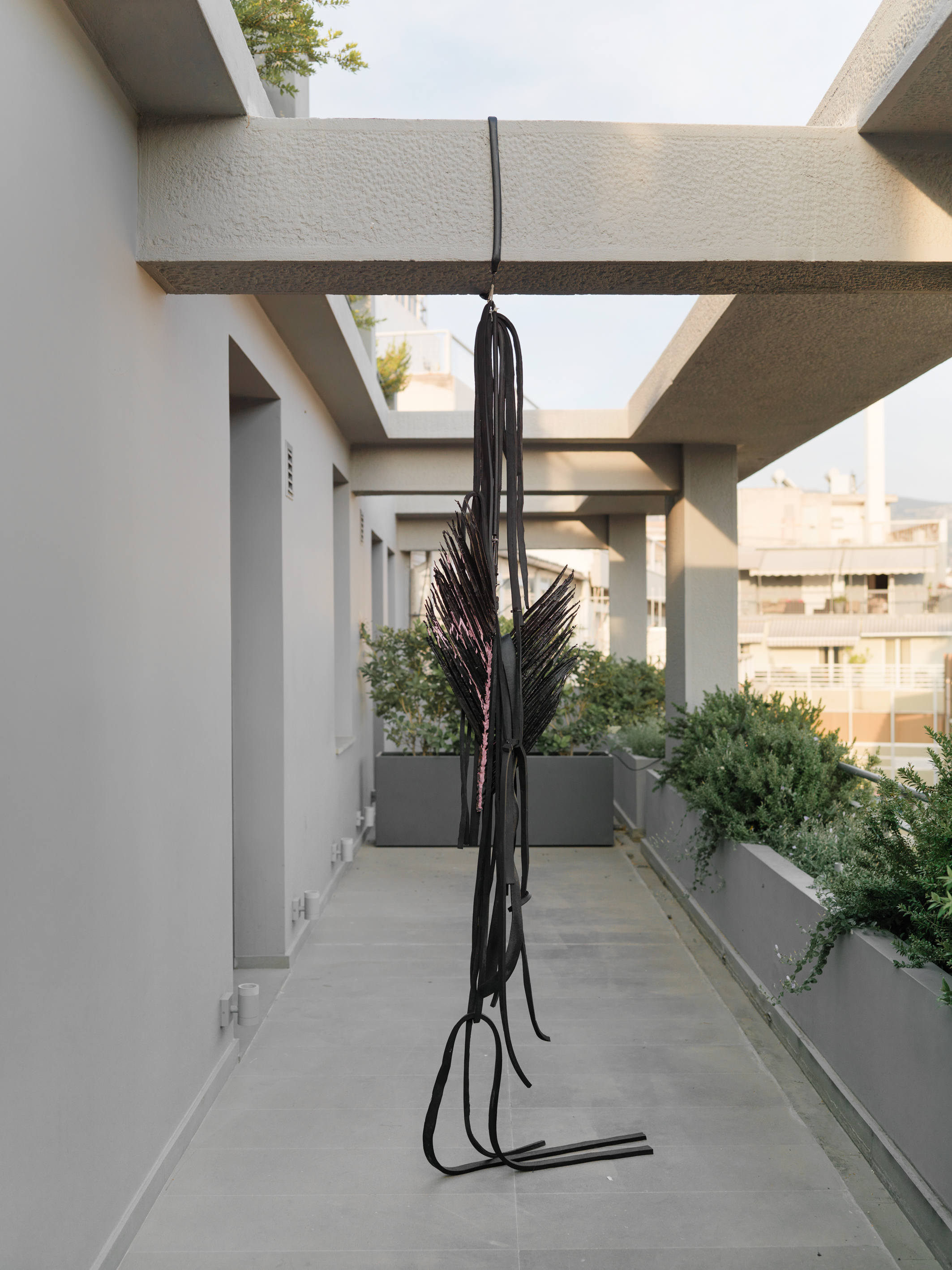 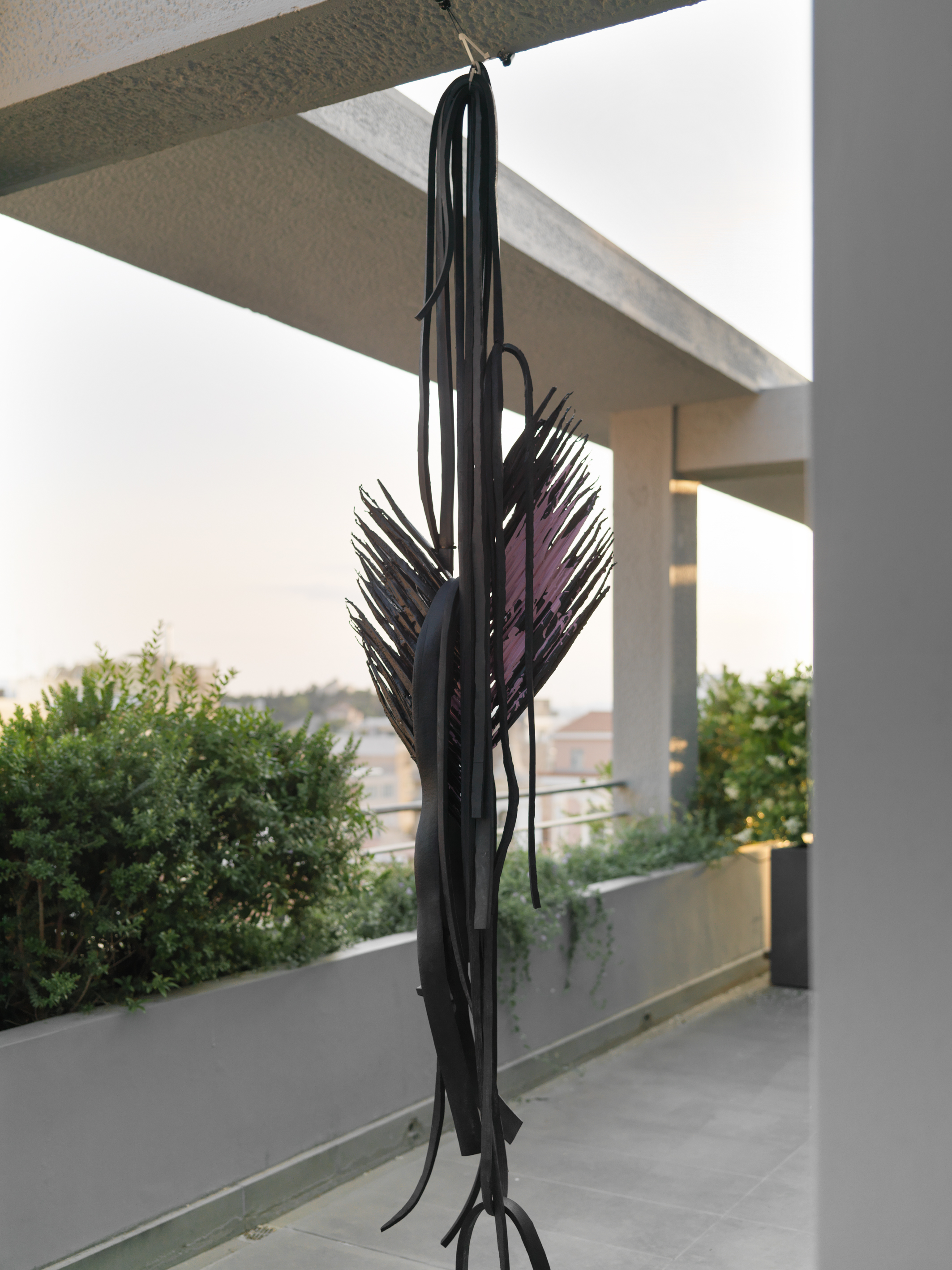 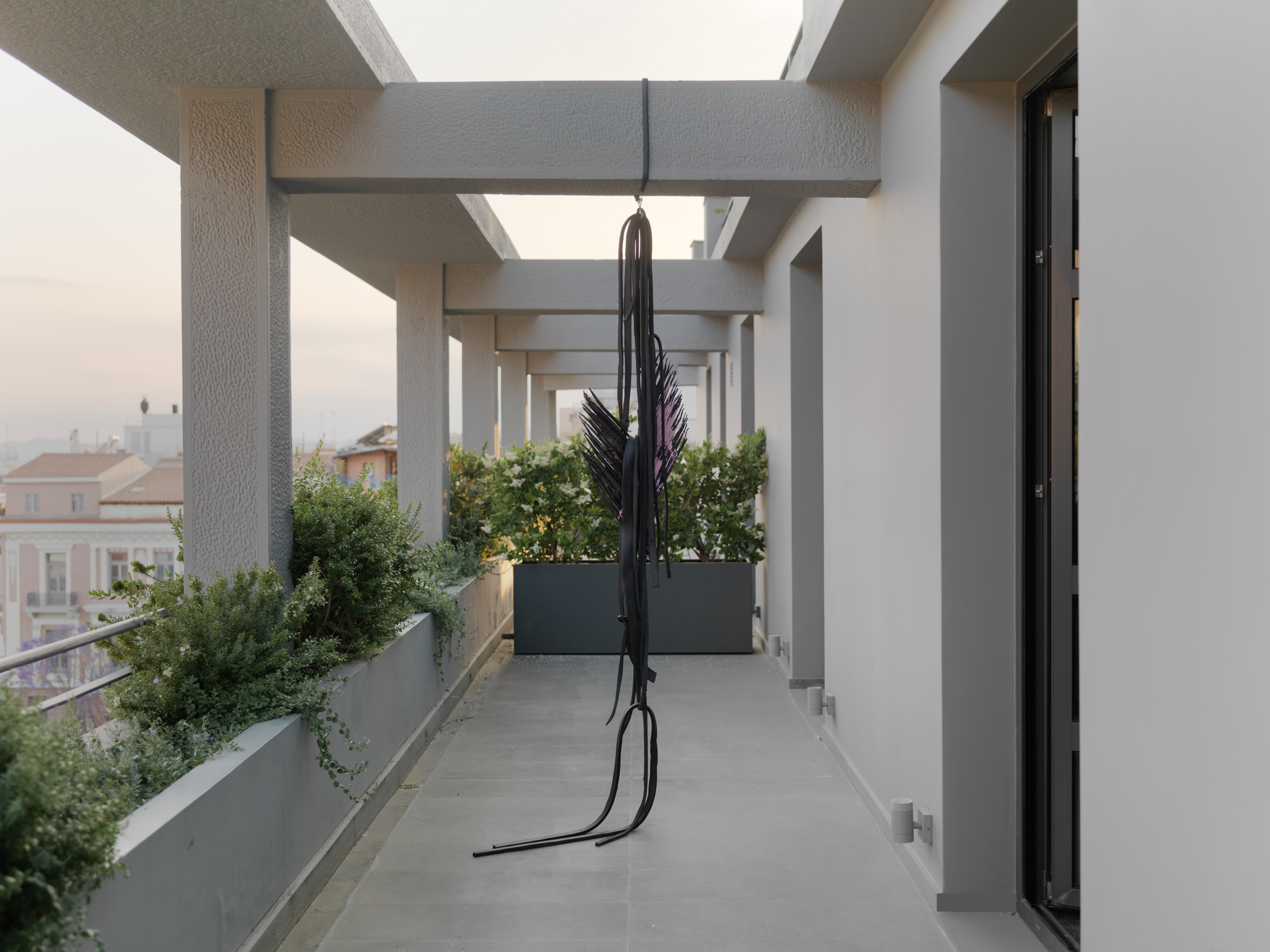 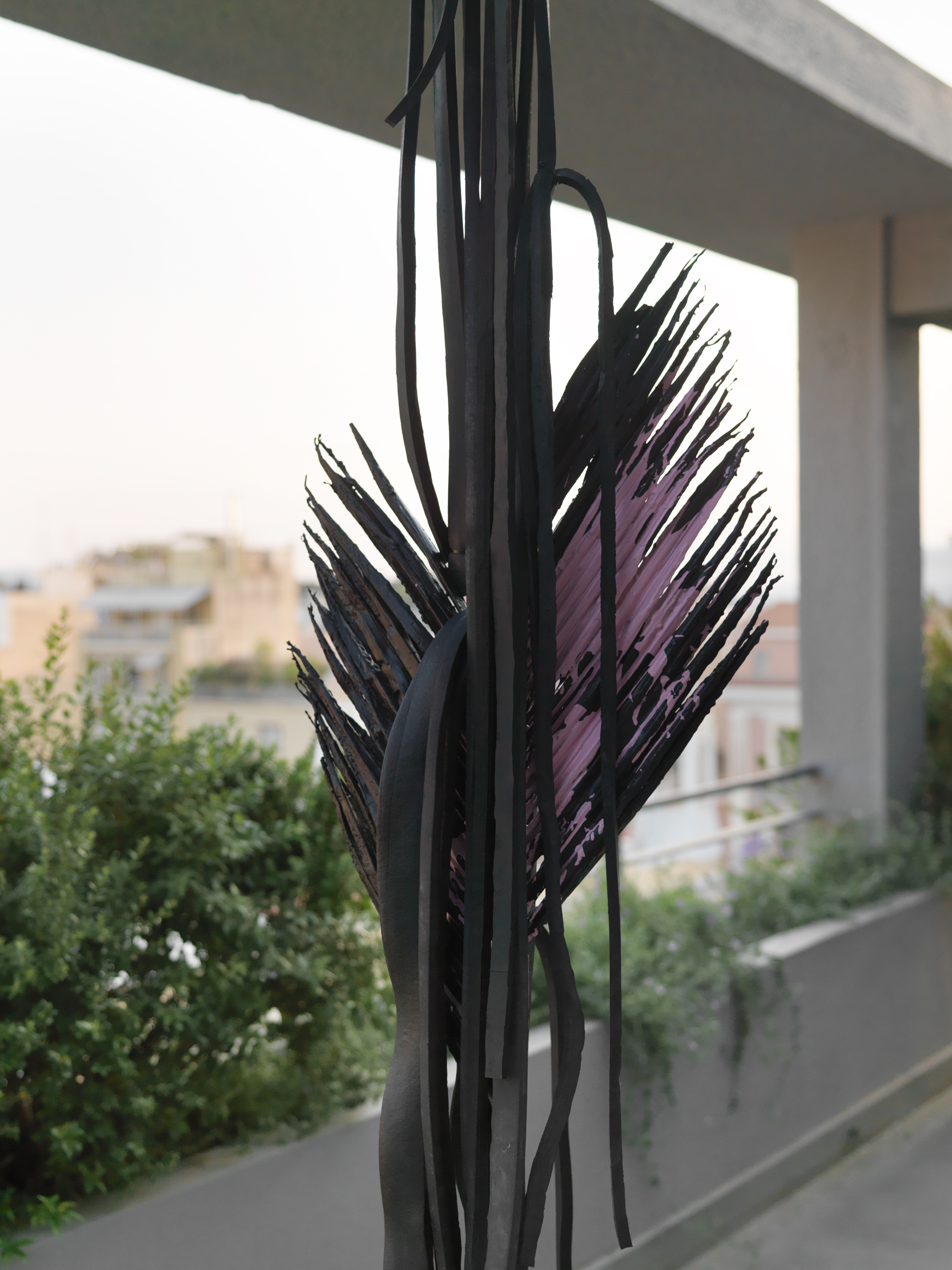 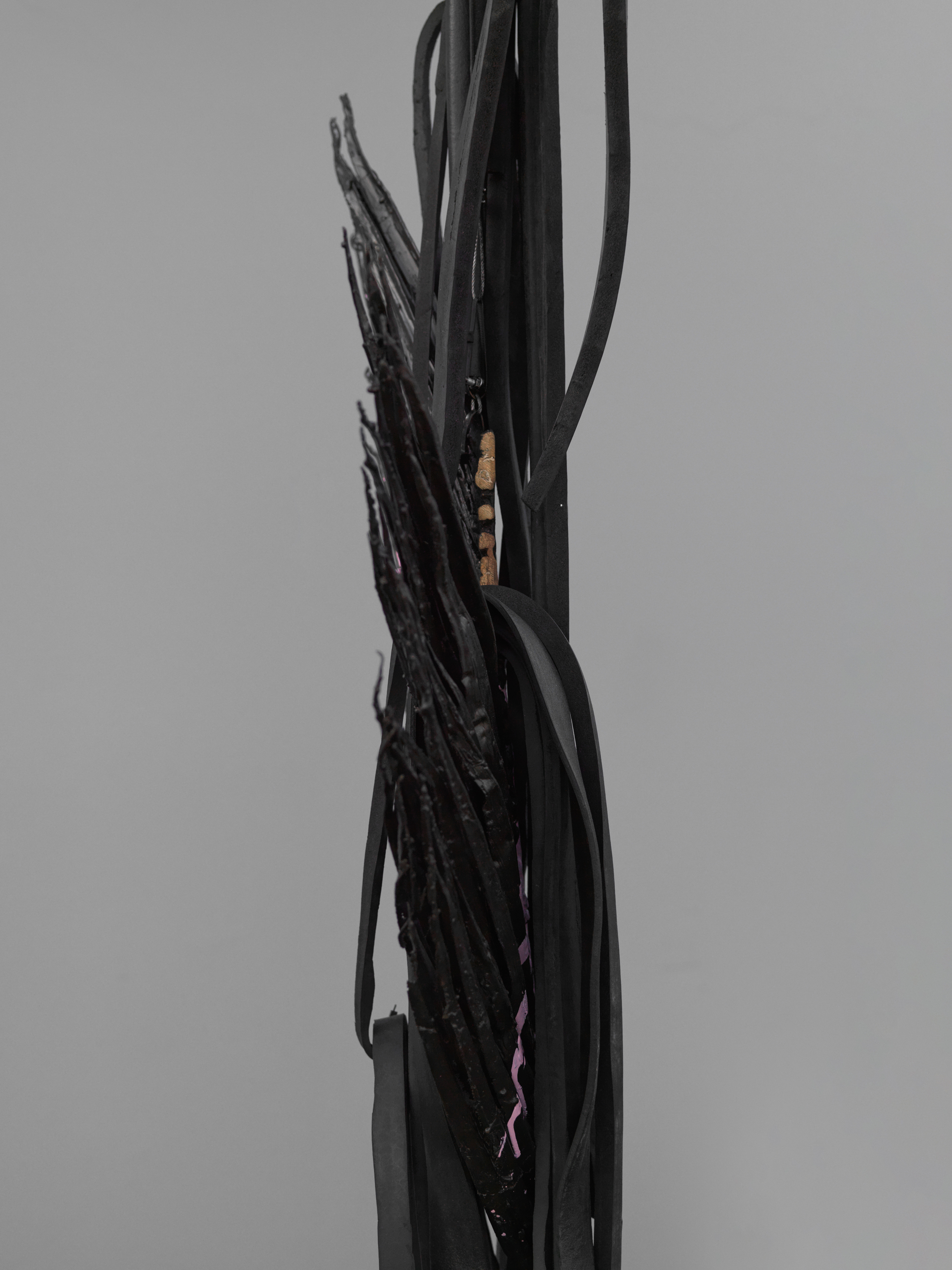 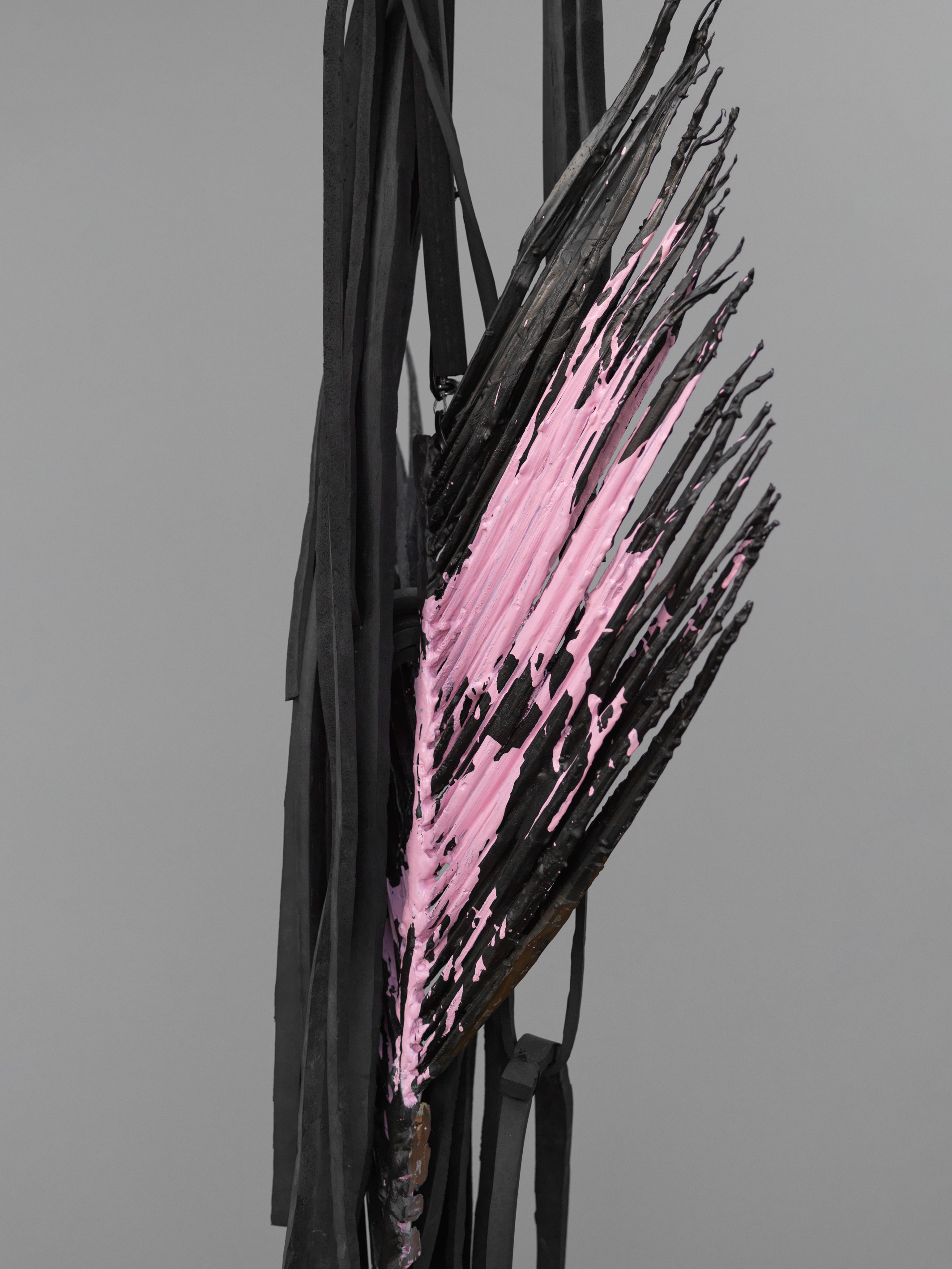 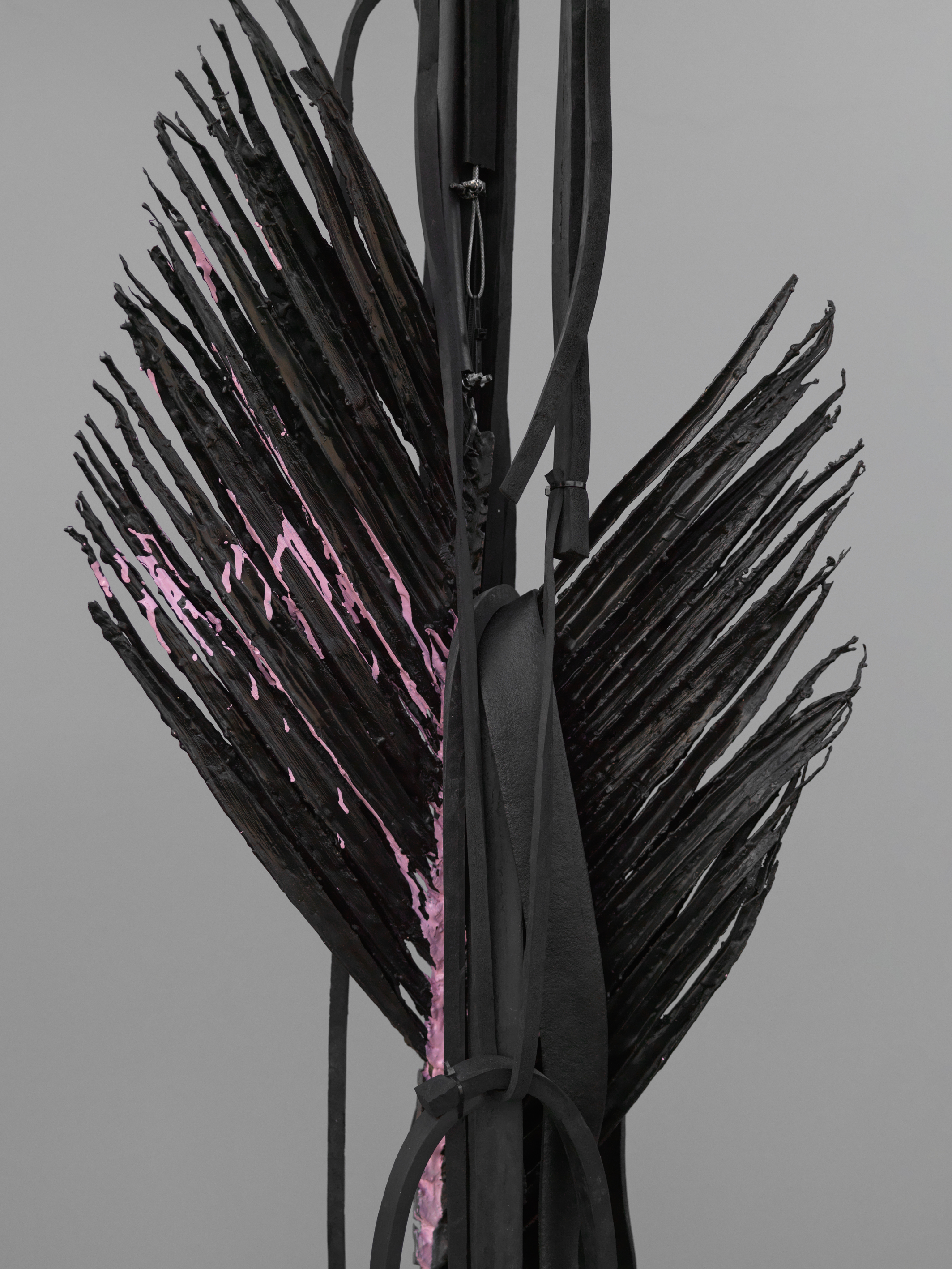 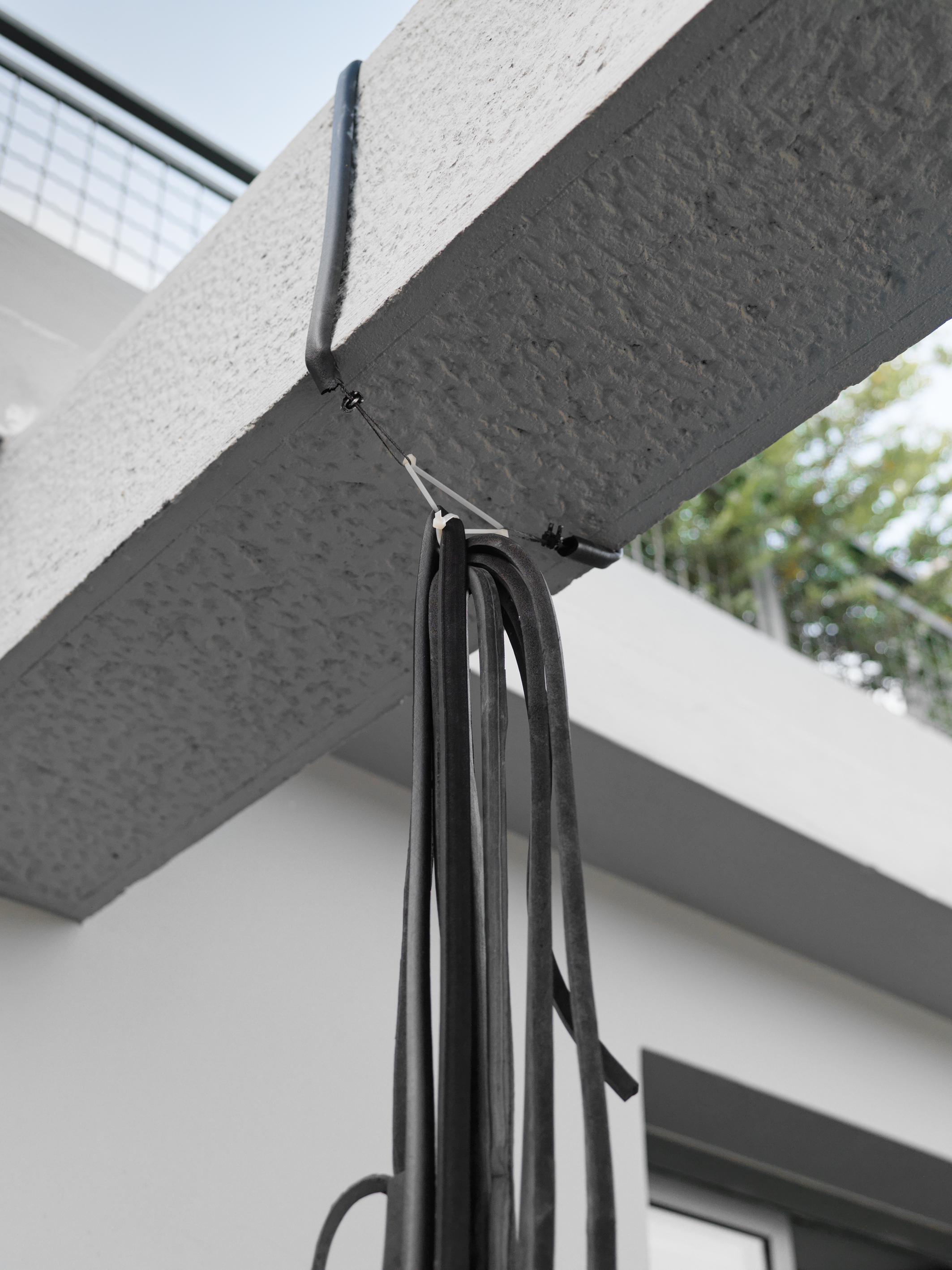 “The atmosphere of the planet Uranus appears to be so heavy that the ferns there are creepers; the animals drag along, crushed by the weight of the gases. I want to mingle with these humiliated creatures which are always on their bellies. If metempsychosis should grant me a new dwelling place, I choose that forlorn planet, I inhabit it with the convicts of my race. Amidst hideous reptiles, I pursue an eternal, miserable death in the darkness where the leaves will be black, the waters of the marshes thick and cold. Sleep will be denied me. On the contrary, I recognize, with increasing lucidity, the unclean fraternity of the smiling alligators.”
— Jean Genet, The Thief’s Journal (1949)

Taking Genet’s depiction of another planet as a departure point of where we currently stand and how we move onwards, a room at Perianth Hotel constitutes a threshold space for our research. But yet what we yearn for is not Earthly. For smaller beings within an atmosphere, weightlessness lives alongside other unattainable fantasies of the absolute. The force of reason protectively anchors itself against the dwelling - a necessary tension, nearly erotic. Nearly as erotic as the stillness of the three bodies of Eros sculptures that move and change through their entangled surroundings. Same as when the fragments leave the studio and lying on the bed, overlooking the Acropolis. Hanging and lifted, they step from sublime to sublimation. Fragmented, detached but still full - suspended they are hanging on a pleasure-terror dissolve. In this relativity of a lucid dream state we invite the guests of 505 to wander and contribute to the growth of the fragments, prior to their confinement. In our pursuit of a not necessarily human atmosphere, we invite fragments of Katerina Komianou’s work and put her practice in conversation with our research. In her ongoing project, she is experimenting with bronze and moving image as part of her practice, approaching their materiality both sculpturally and metaphorically. The isolation of small floral fragments taken from the urban environment, found in the Athenian urban fabric with historical and political meaning constitute the entities that form the conversation and through that they are reformed themselves. This procedure produces reversals, giving birth to entangled fragments . For the four day event at Room 505 of Perianth hotel, we invite visitors to dwell among selected sculptural fragments of her work within a constructed habitual environment. Lie in bed with them and stare at the Acropolis as they are slipping, mystifying and eventually fading out with new fragments materialised through the conversations and entanglements that occur in room 505.