Elsa Salonen / Distilling the Essence of the Seas 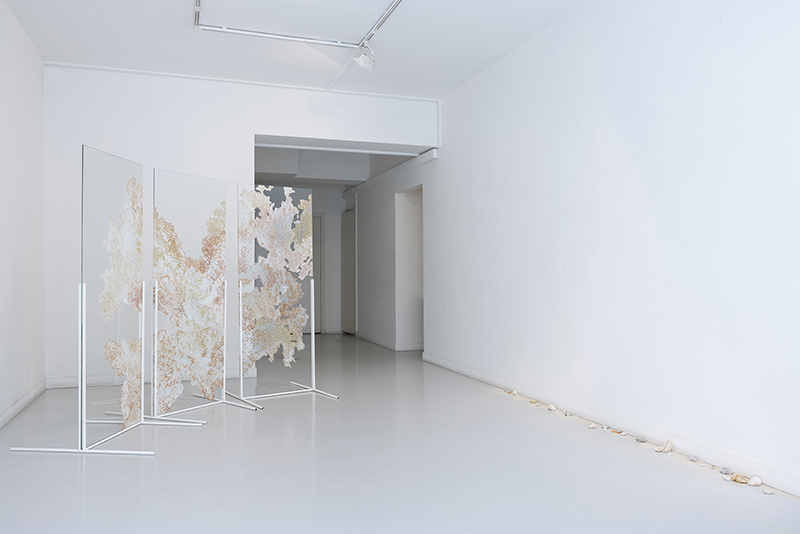 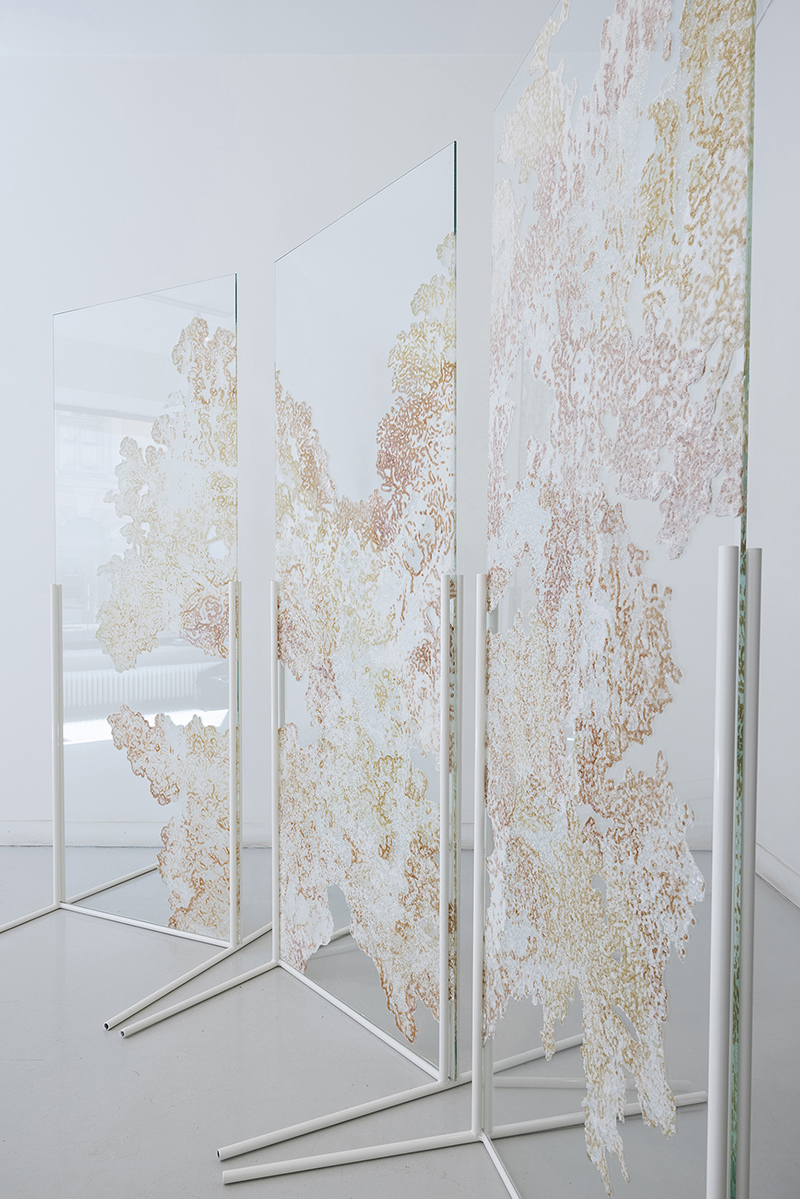 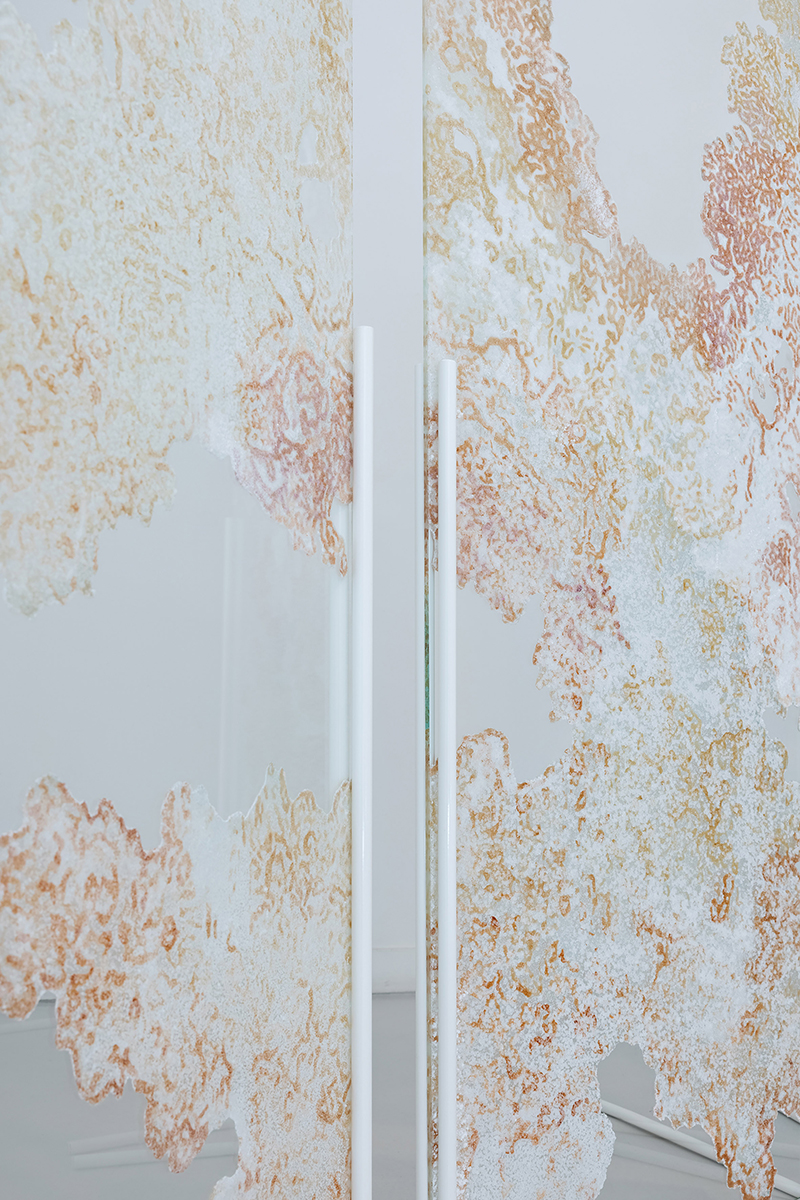 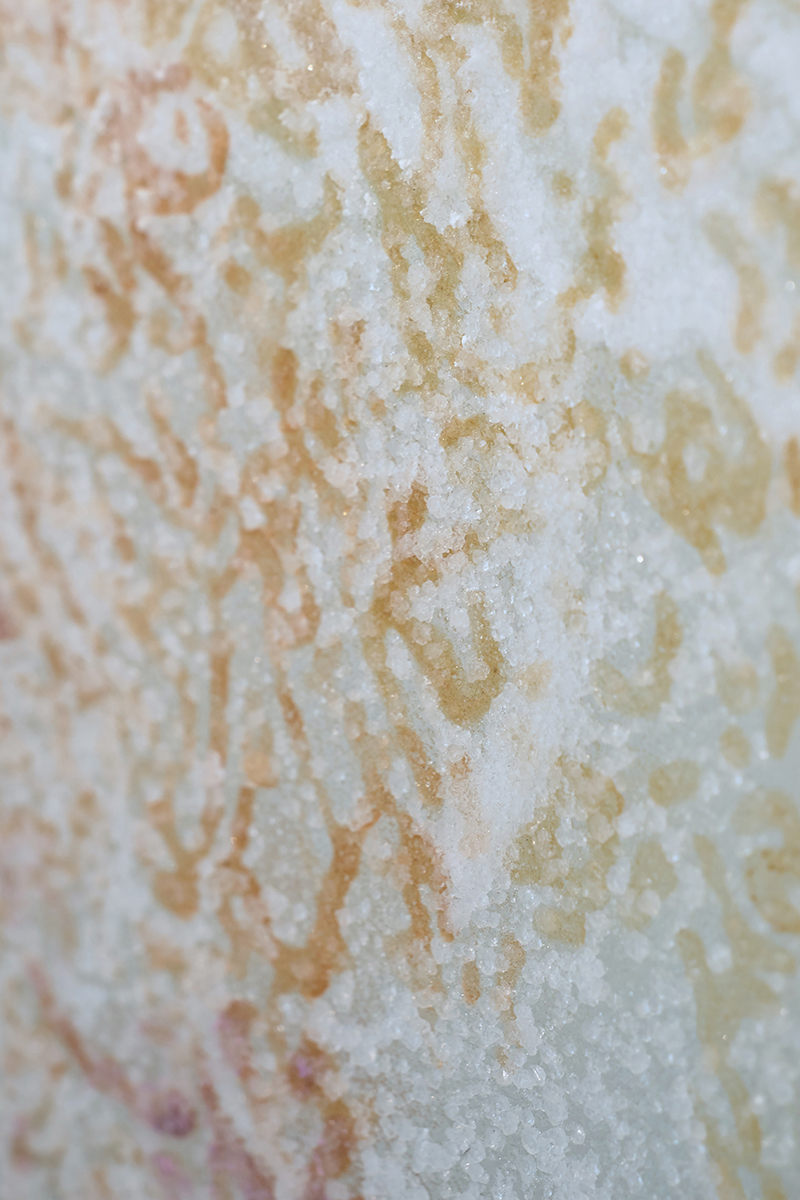 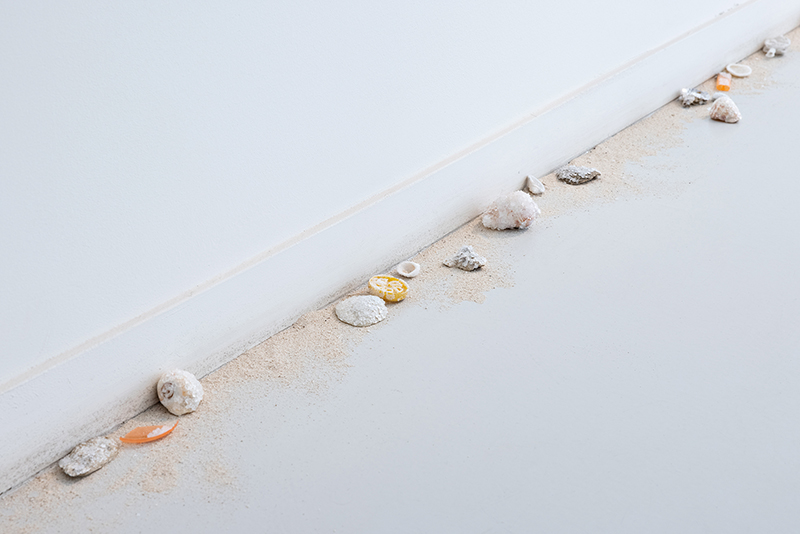 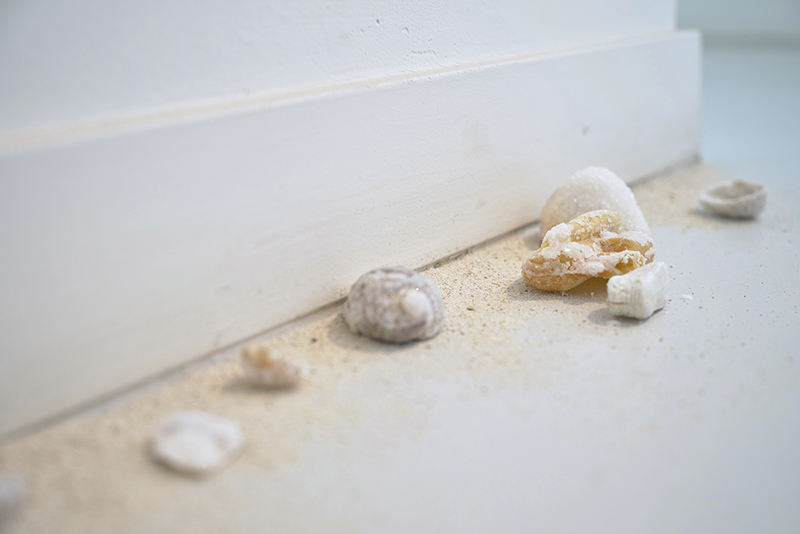 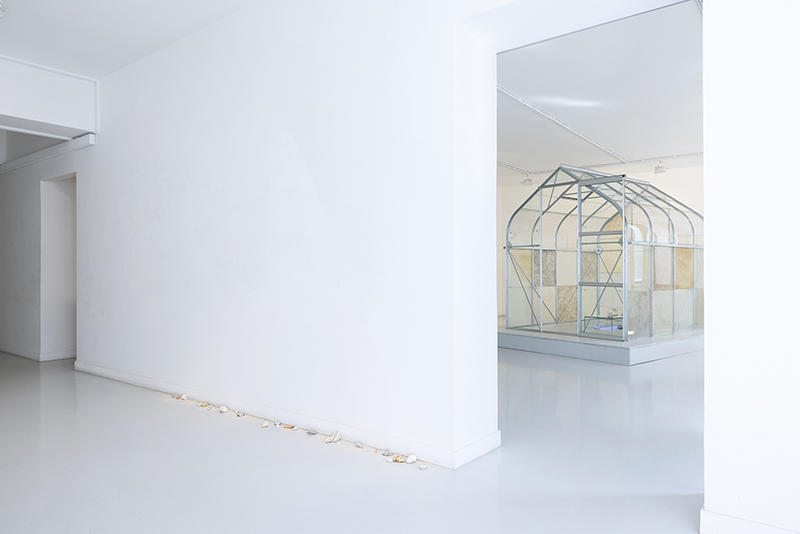 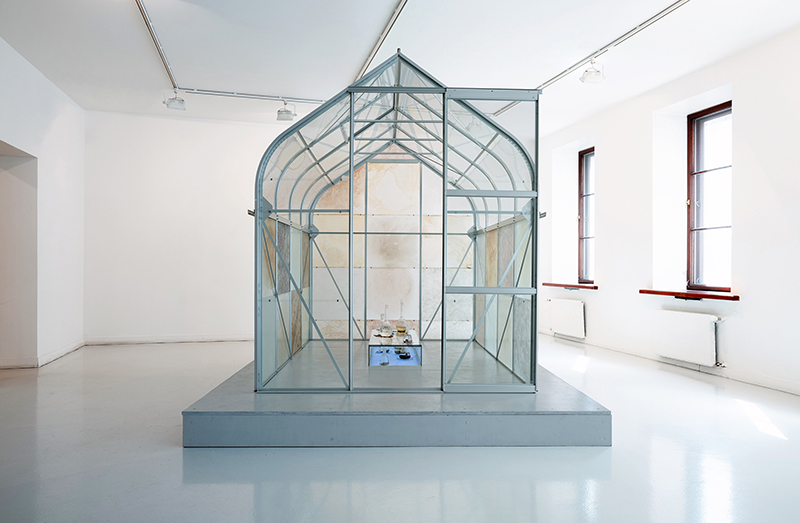 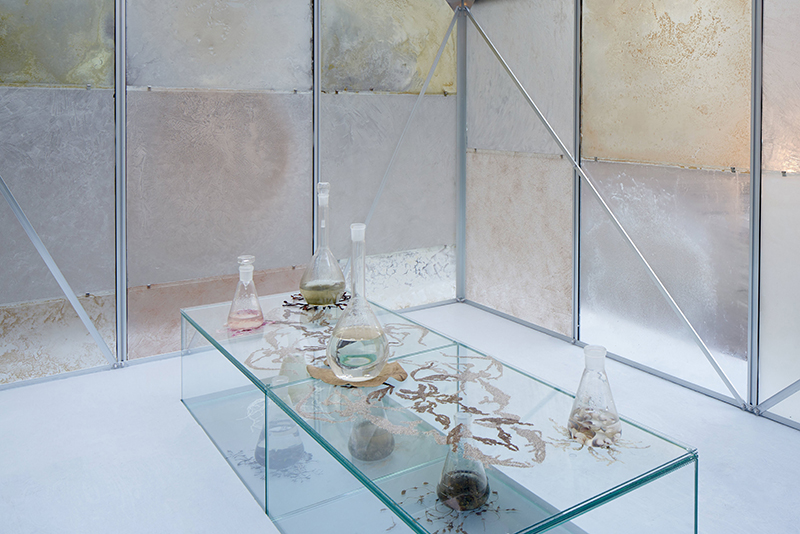 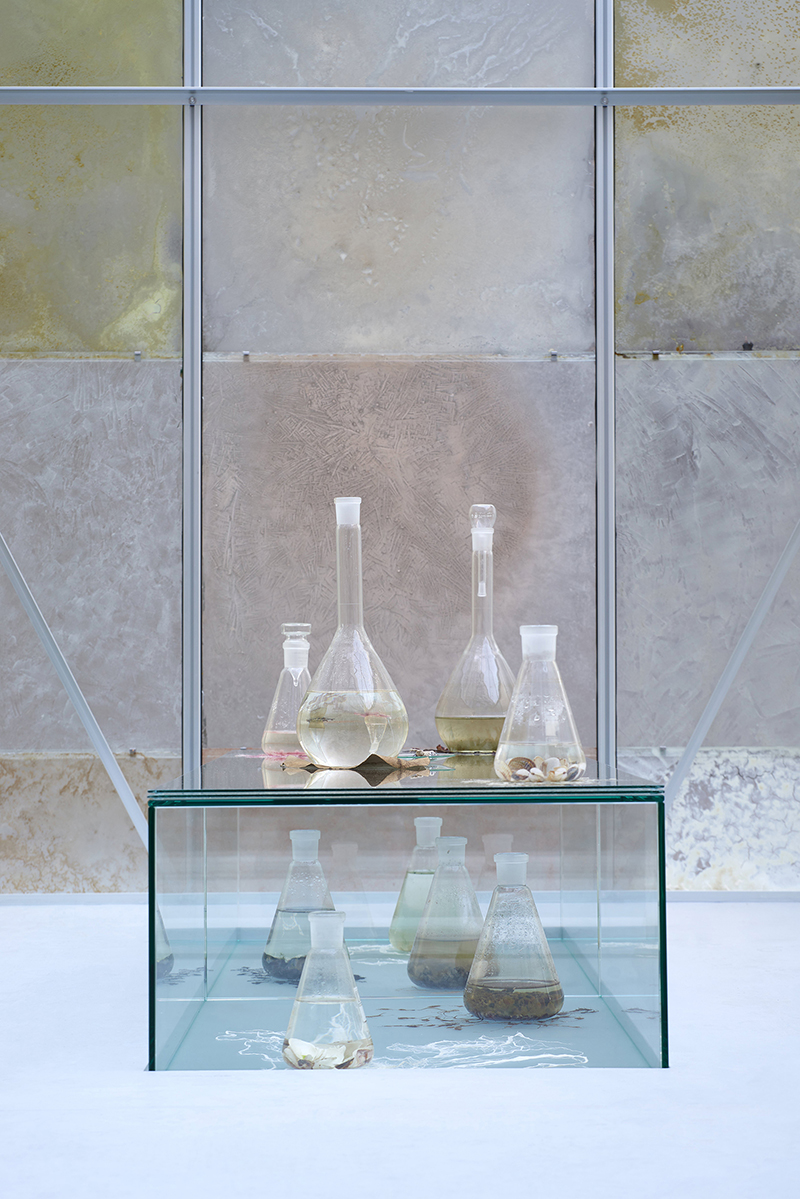 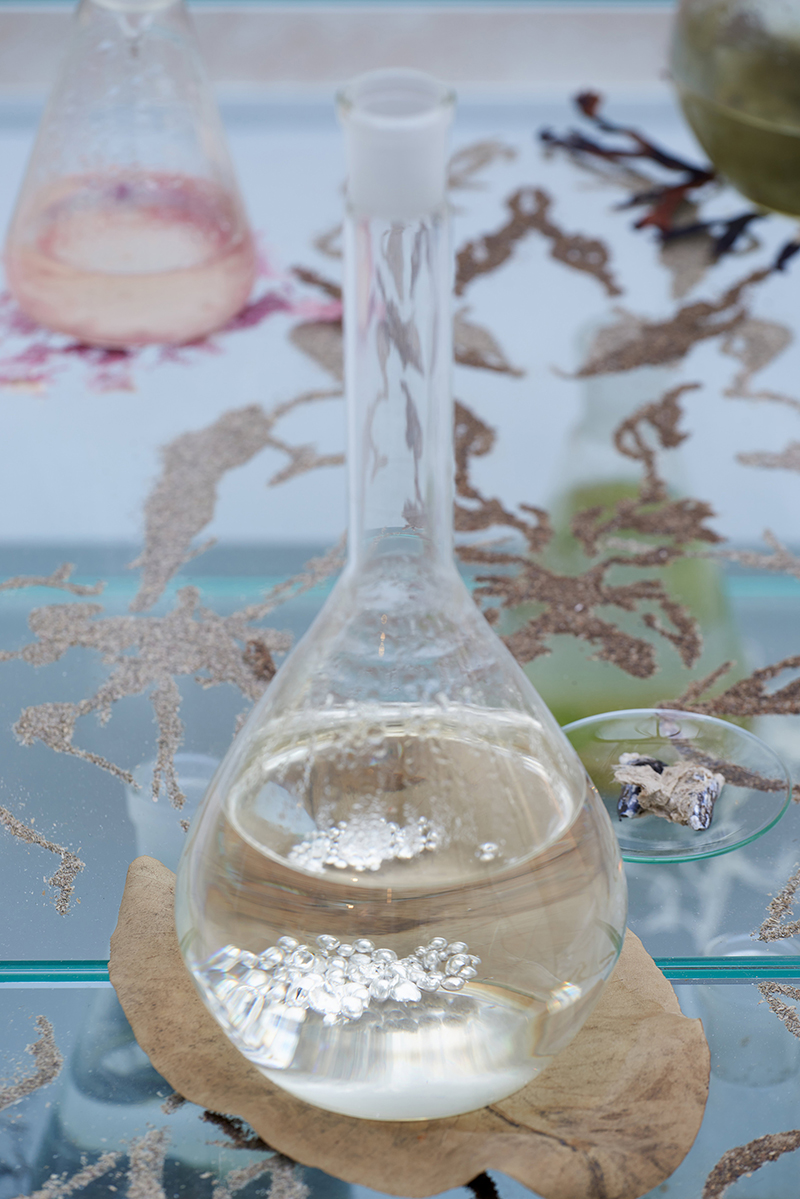 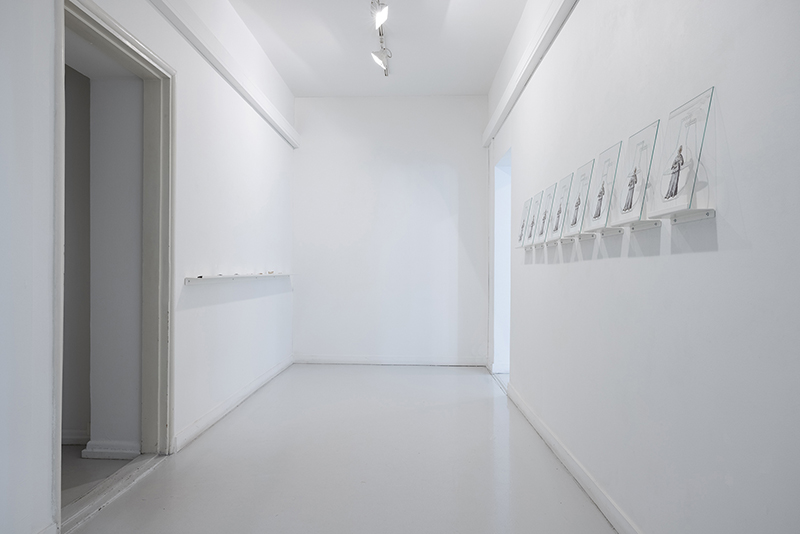 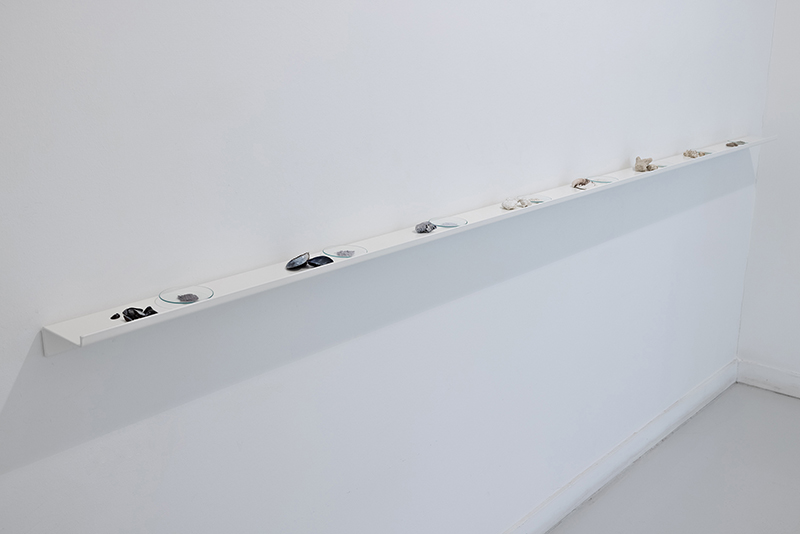 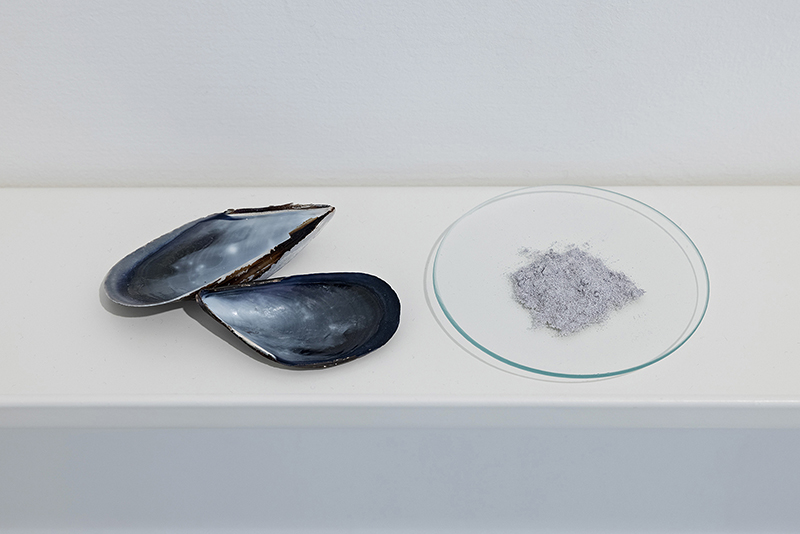 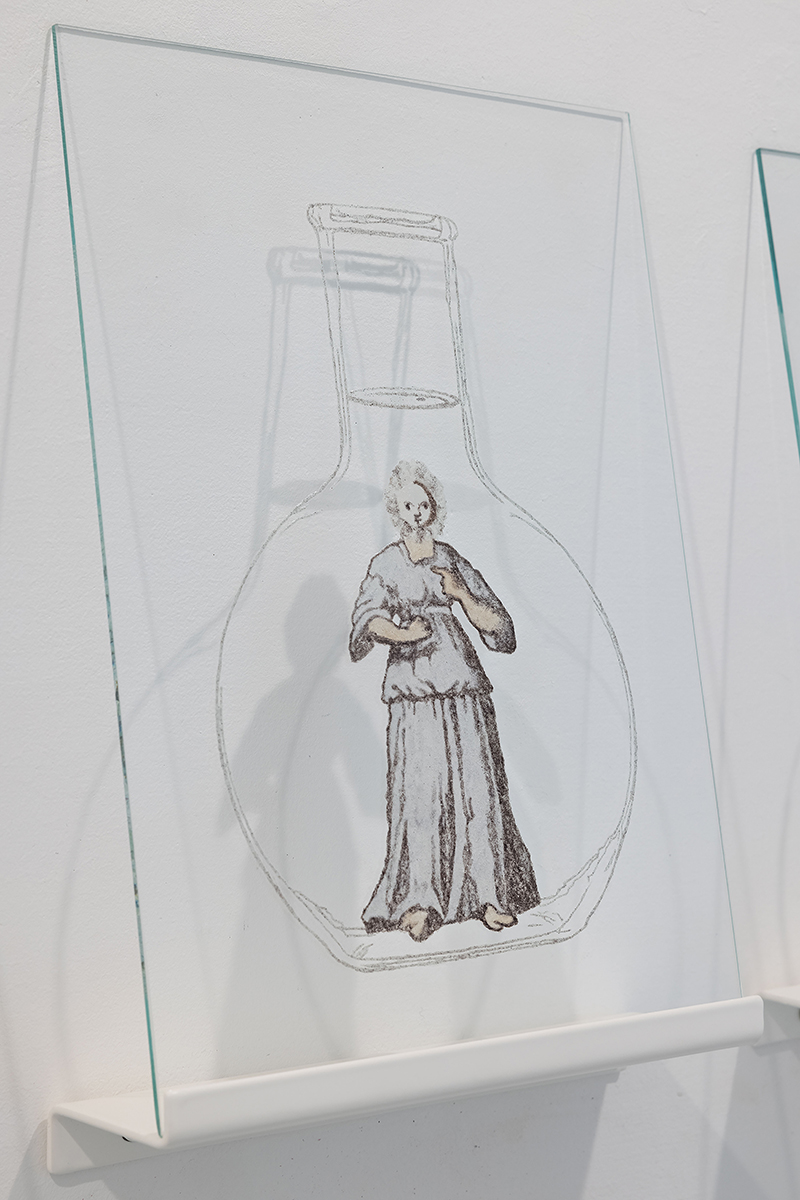 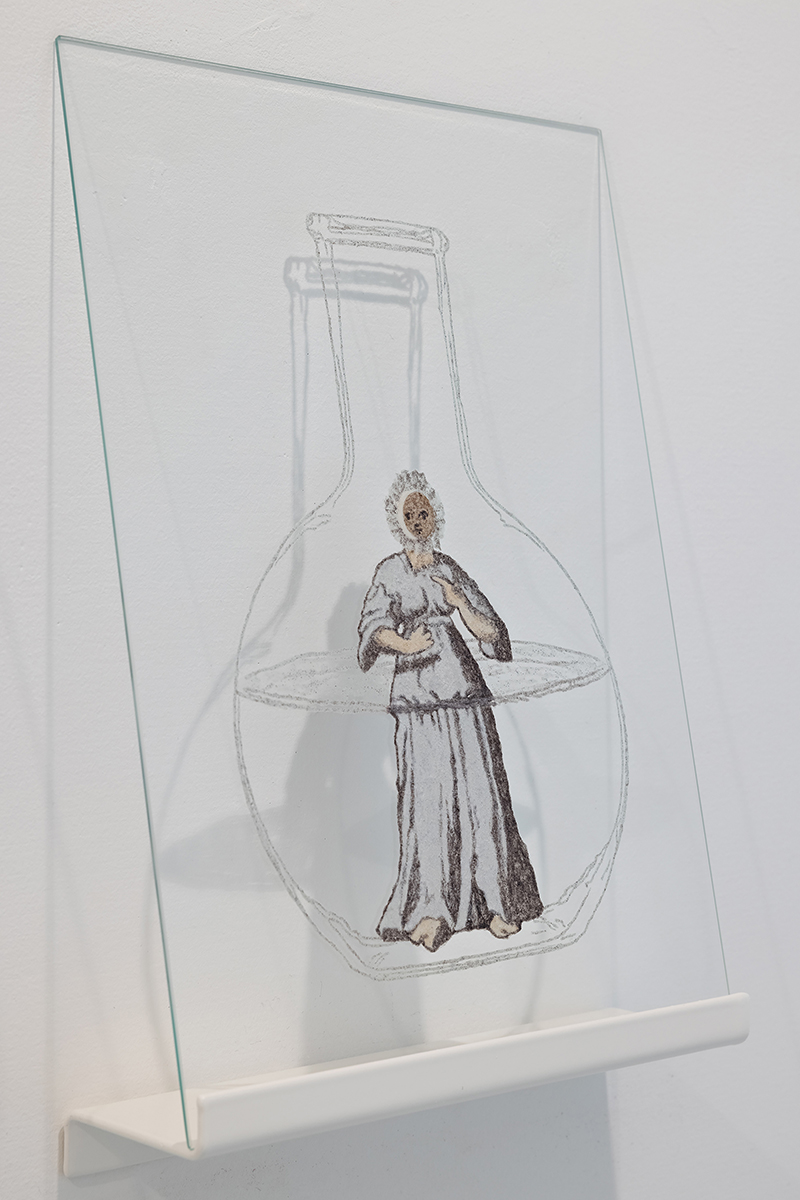 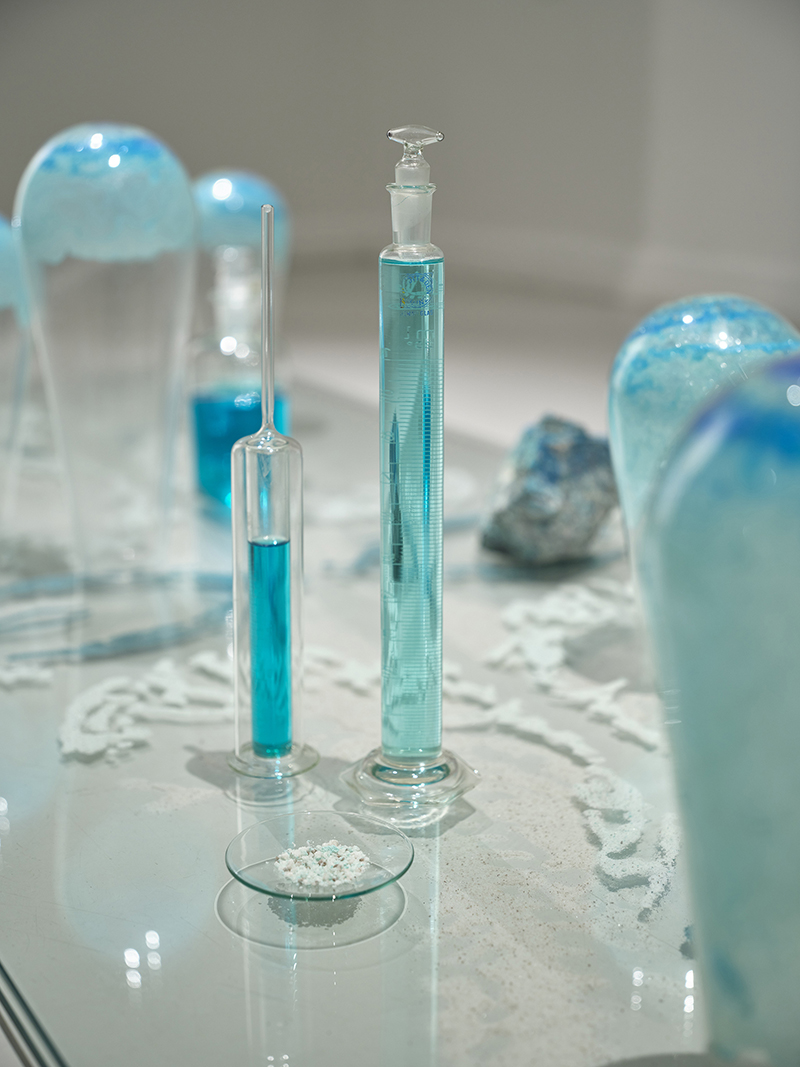 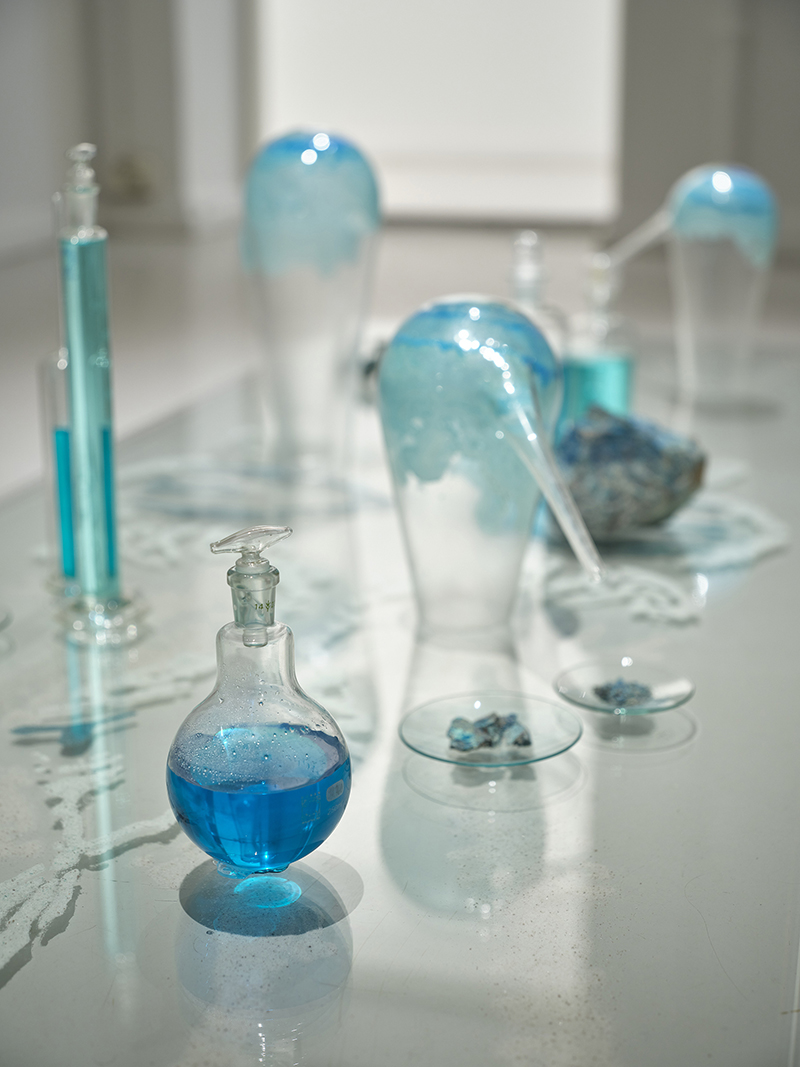 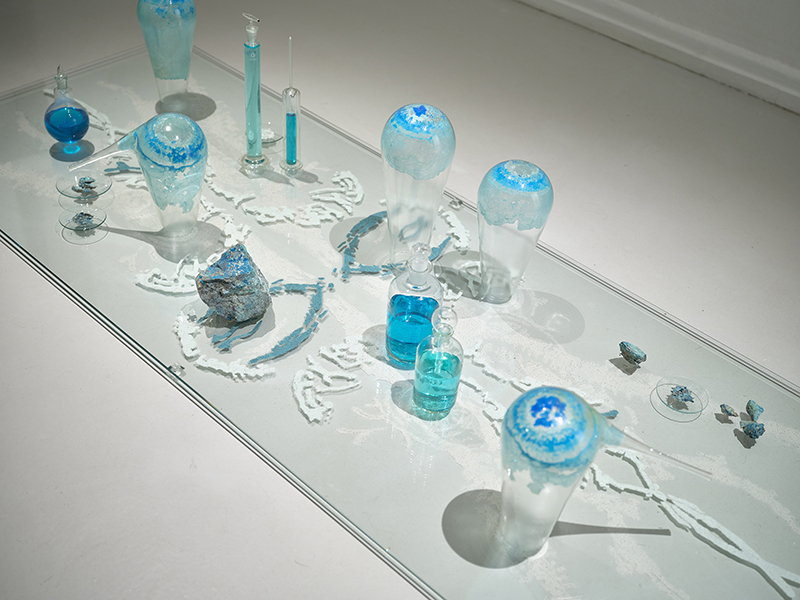 All the colour pigments of the exhibition have been gathered by Salonen and her friends from various natural sites around the world. She has made colours, for example, by
cooking algae and aquatic plants, as well as grinding seashells, plastic debris and pieces of dead corals drifted ashore. Through these materials and the places associated with them, Salonen studies the nature of the sea from the alchemist, animist, and scientific points of view.
The main work of the exhibition ‘Veden väelle’ is made with materials from the Baltic Sea and it is dedicated to its ancient water sprites. According to Finnish mythology, each
natural environment is guarded by its sprites, who affect its well-being and prosperity. To ensure good fishing fortune various offerings, such as silver, were brought to the mighty Water Sprites.
The series ‘Influence of the Moon on Bodies of Water’ is painted with materials found on the beaches, such as shells. Each work in the series is painted at a different stage of the lunar cycle; a painting depicting the full moon at the time of the full moon, a painting
depicting the new moon at the time of the new moon, etc. The moon controls the
movements of the tides, and in Finnish folklore, it also defined the lives of the people. The different stages of the lunar cycle influenced the choice of a favourable time to do different jobs.
In the first room of the gallery, a view of a bleaching coral reef in the middle of
microplastics depicts the current state of the seas. Painted with ochres and plastic debris collected from Colombian beaches, ‘I Dive in the Ocean as in a Prayer’ celebrates
underwater beauty while asking for strength to protect it. The last installation in the
exhibition ‘The Colour of Whale Fossils’ Songs’ consists of a marine blue copper patina of the Atacama Desert in Chile. The Atacama is the driest place in the world and - as a
former seabed - the richest marine mammal fossil habitat.
Medieval alchemists studied natural materials, from which they also made colours. Through the materials, they tried to understand the surrounding universe and at the same time the interconnectedness of everything, the role of the individual; oneself. One of the most important steps in alchemy was repeated distillation, which left the purest essence of the substance - and the alchemist - in the glass flask.
Elsa Salonen
Biography
Elsa Salonen (b. 1984 in Turku, Finland) graduated from the Italian academy of fine arts in Bologna in 2008. During the last decade, she has been mainly working in Berlin. Works by Salonen have been widely featured in many different institutions, including Schwartzsche Villa and Kunstverein Wiesbaden in Germany, Viborg art hall in Denmark, the Miguel
Urrutia art museum in Bogota, and the Lissone contemporary art museum in Milan. The solo exhibitions in 2021 include the Turku City Art Museum WAMx and the Jochen Hempel Gallery in Leipzig.