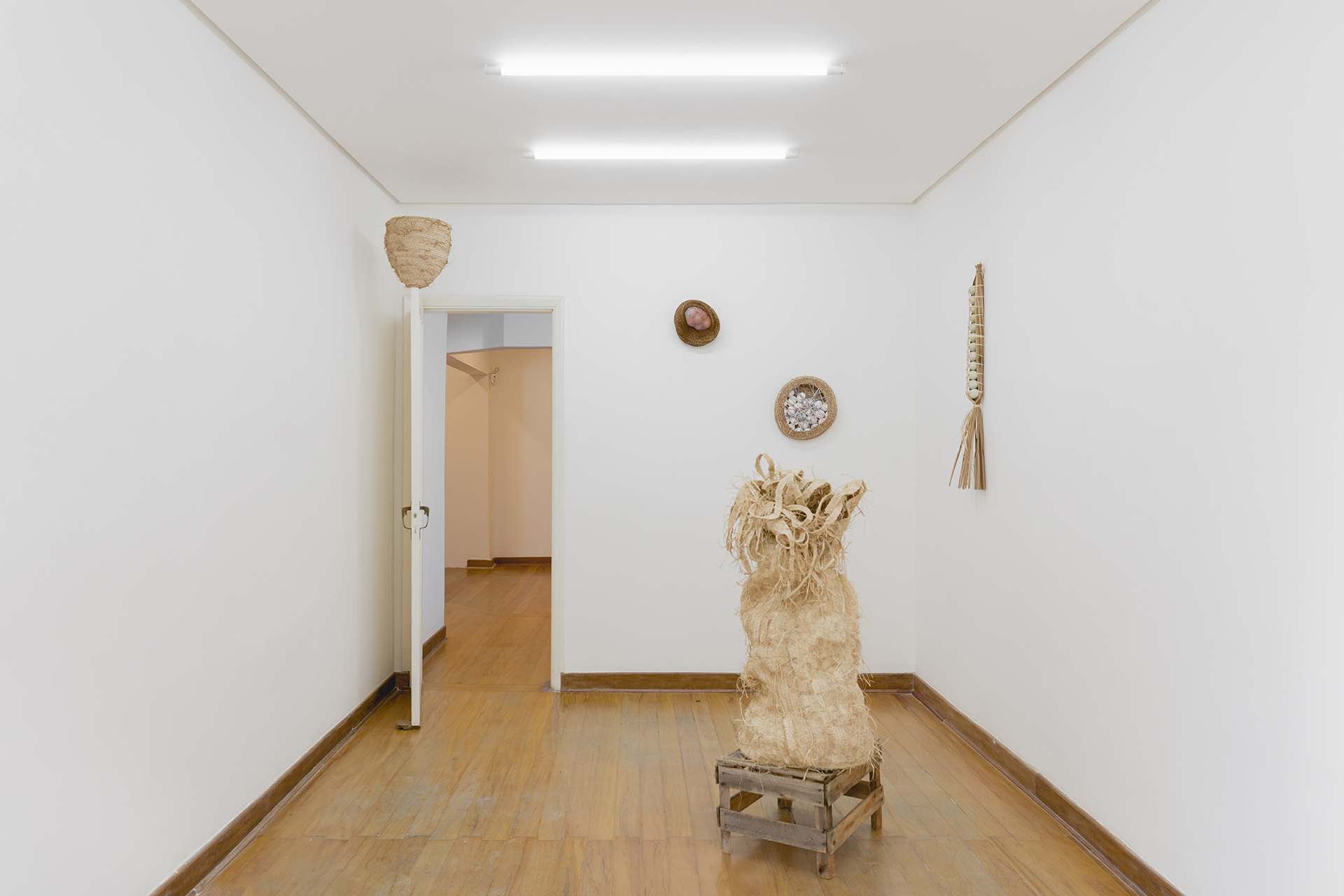 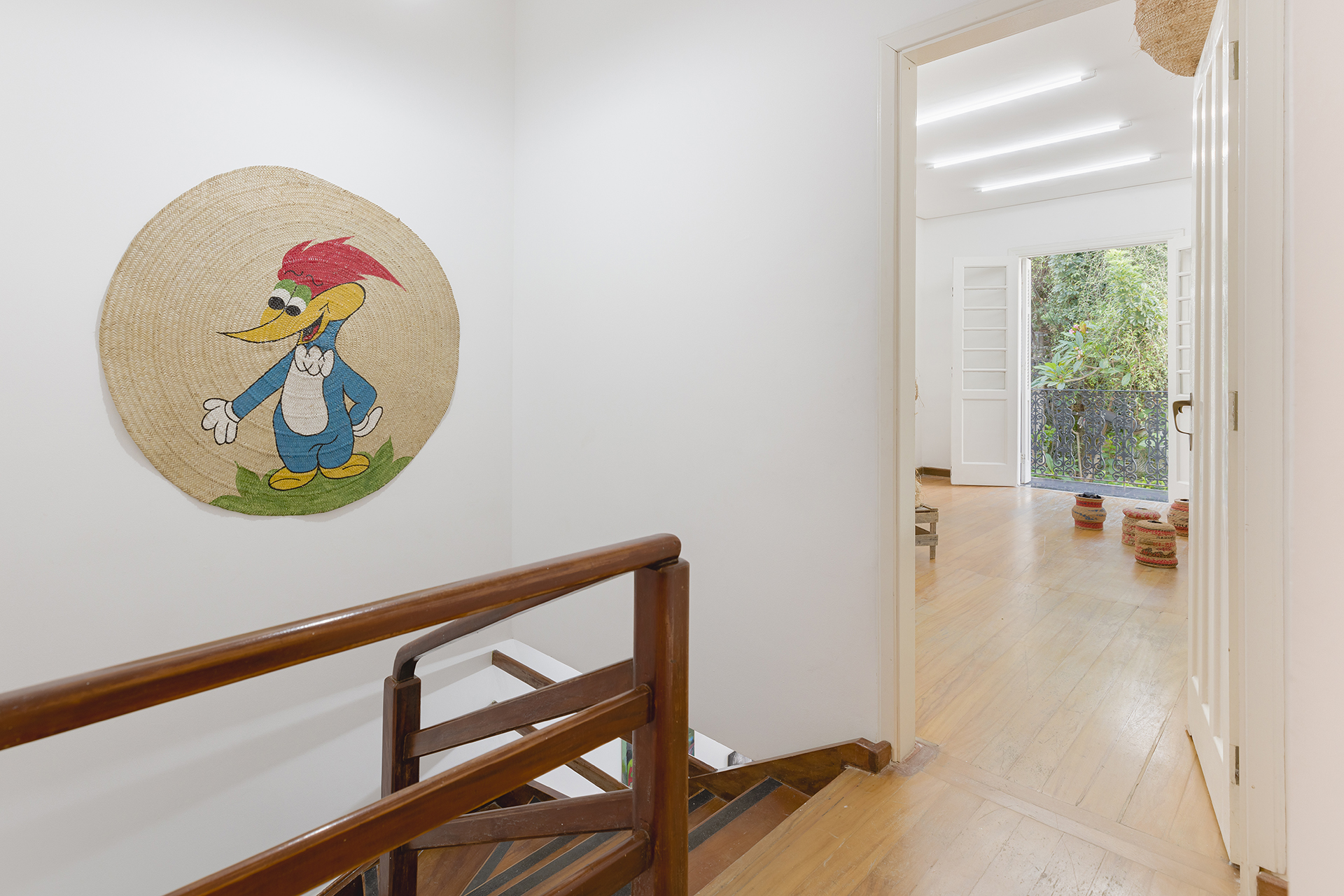 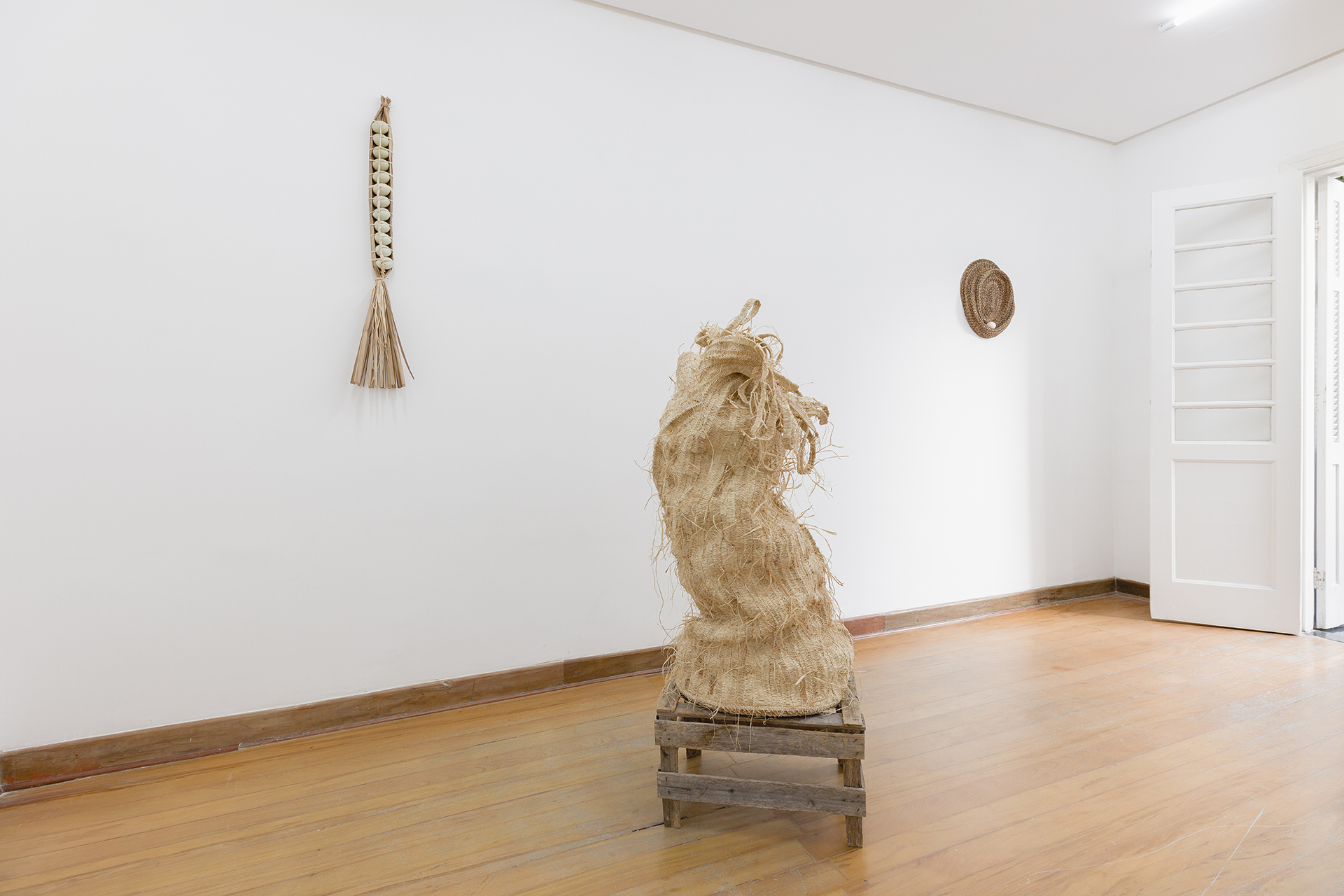 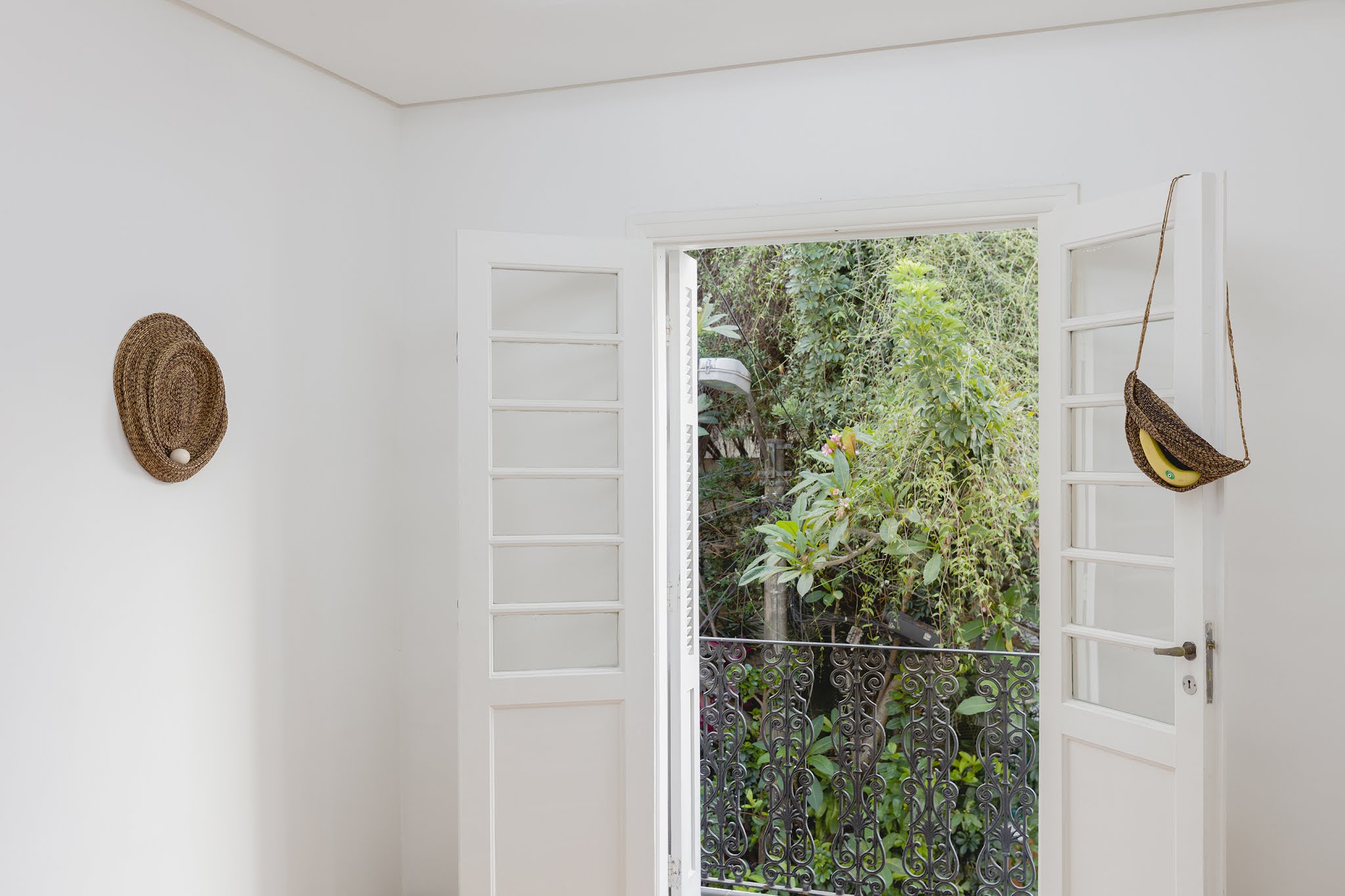 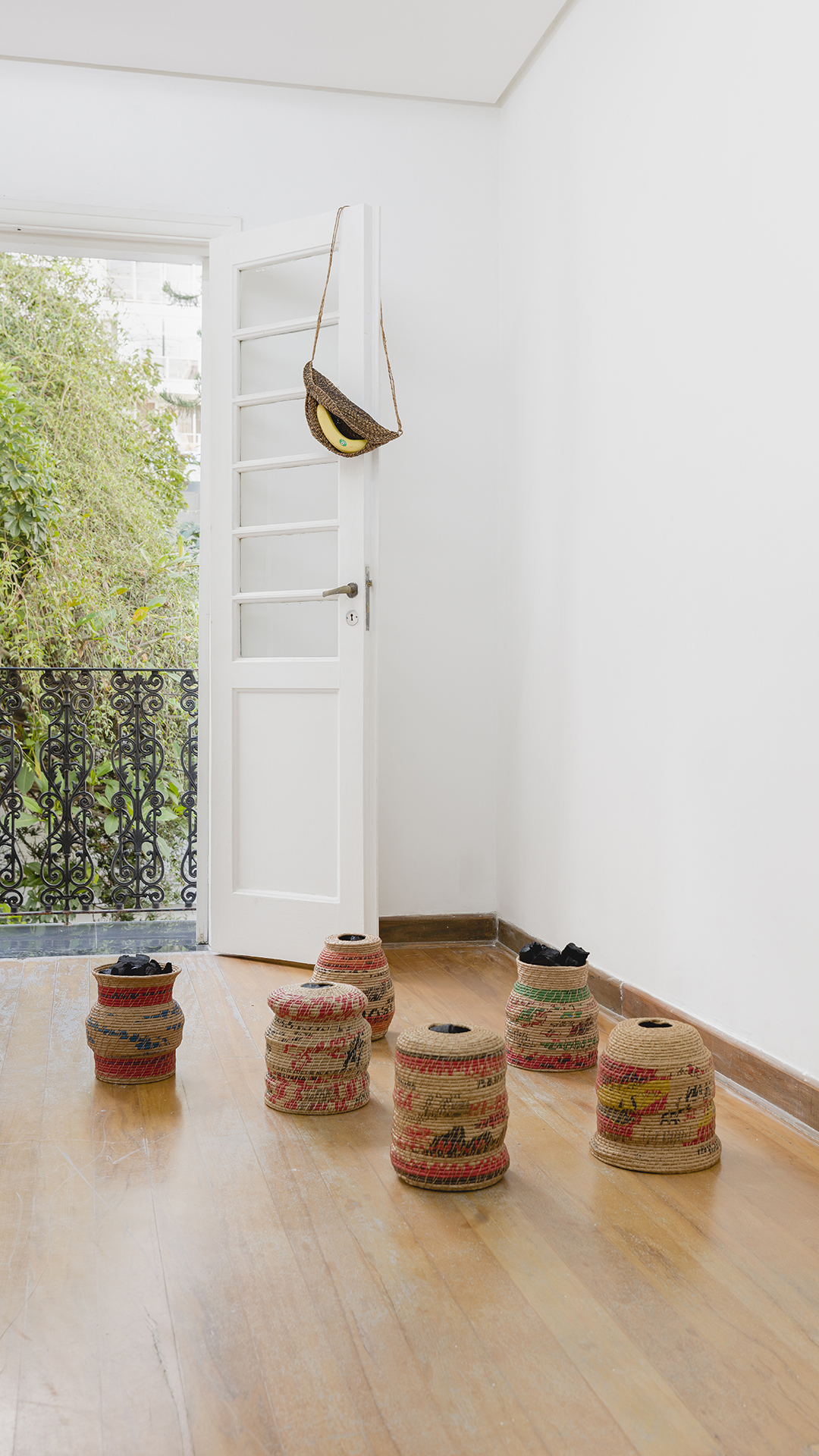 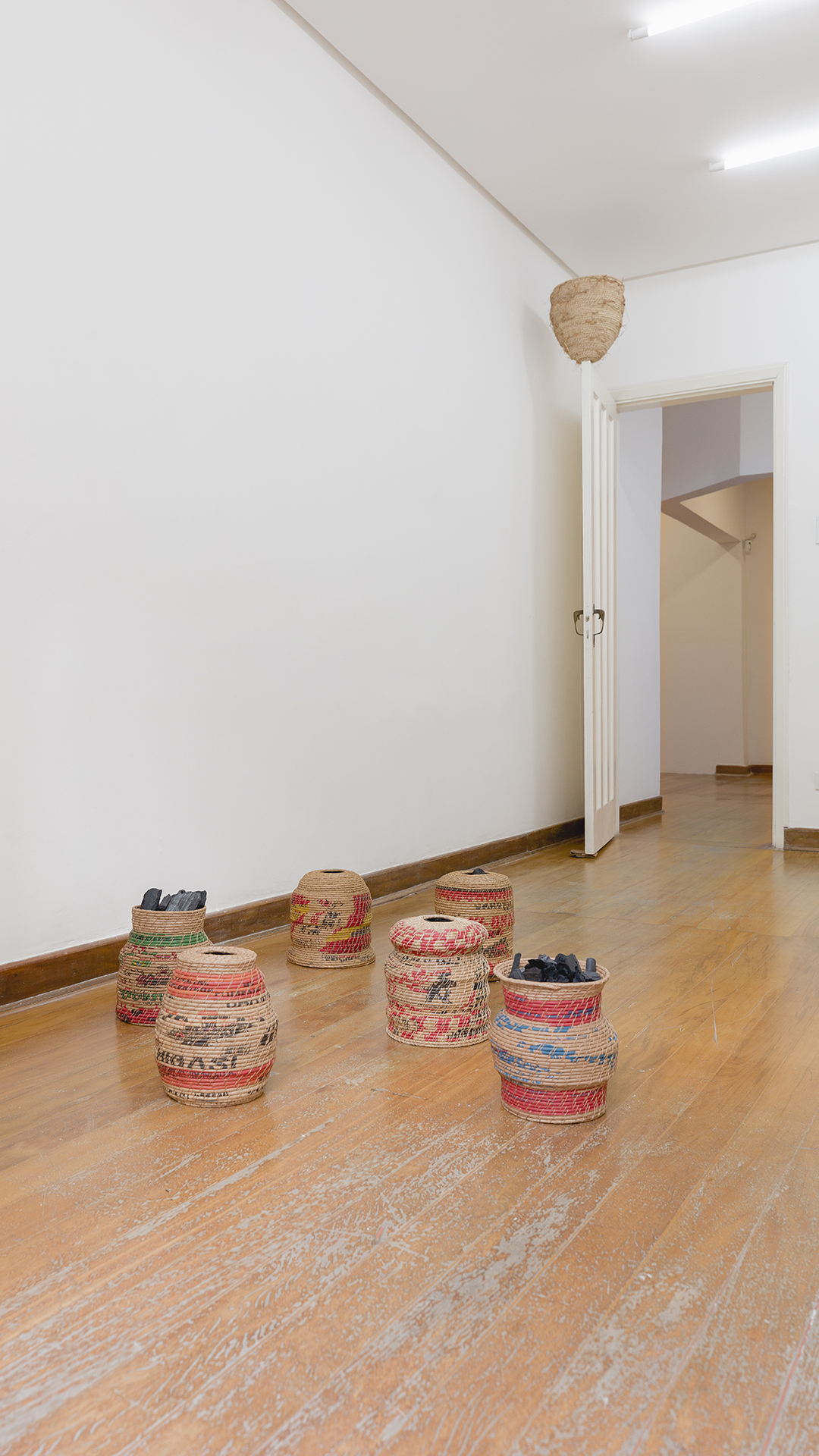 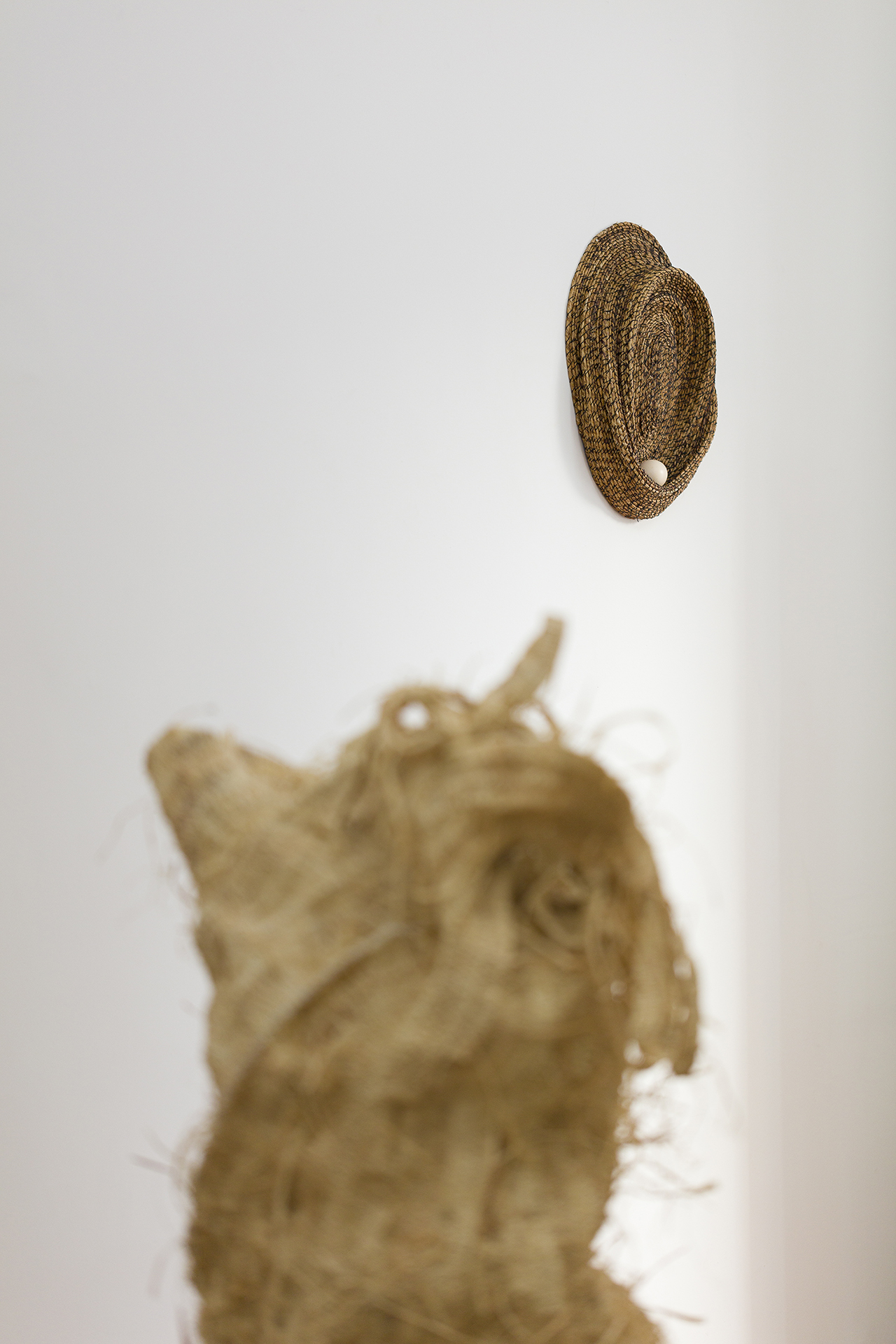 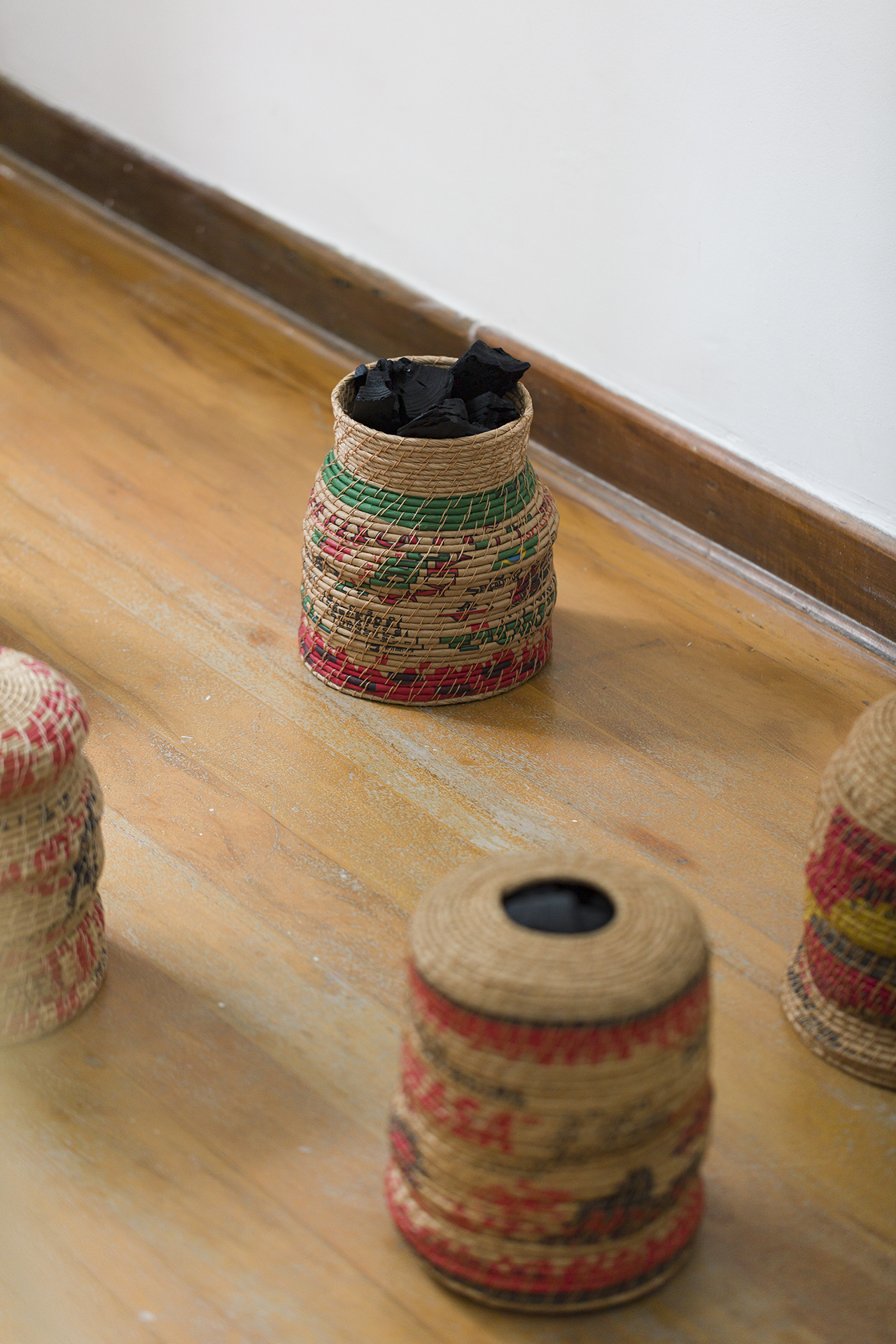 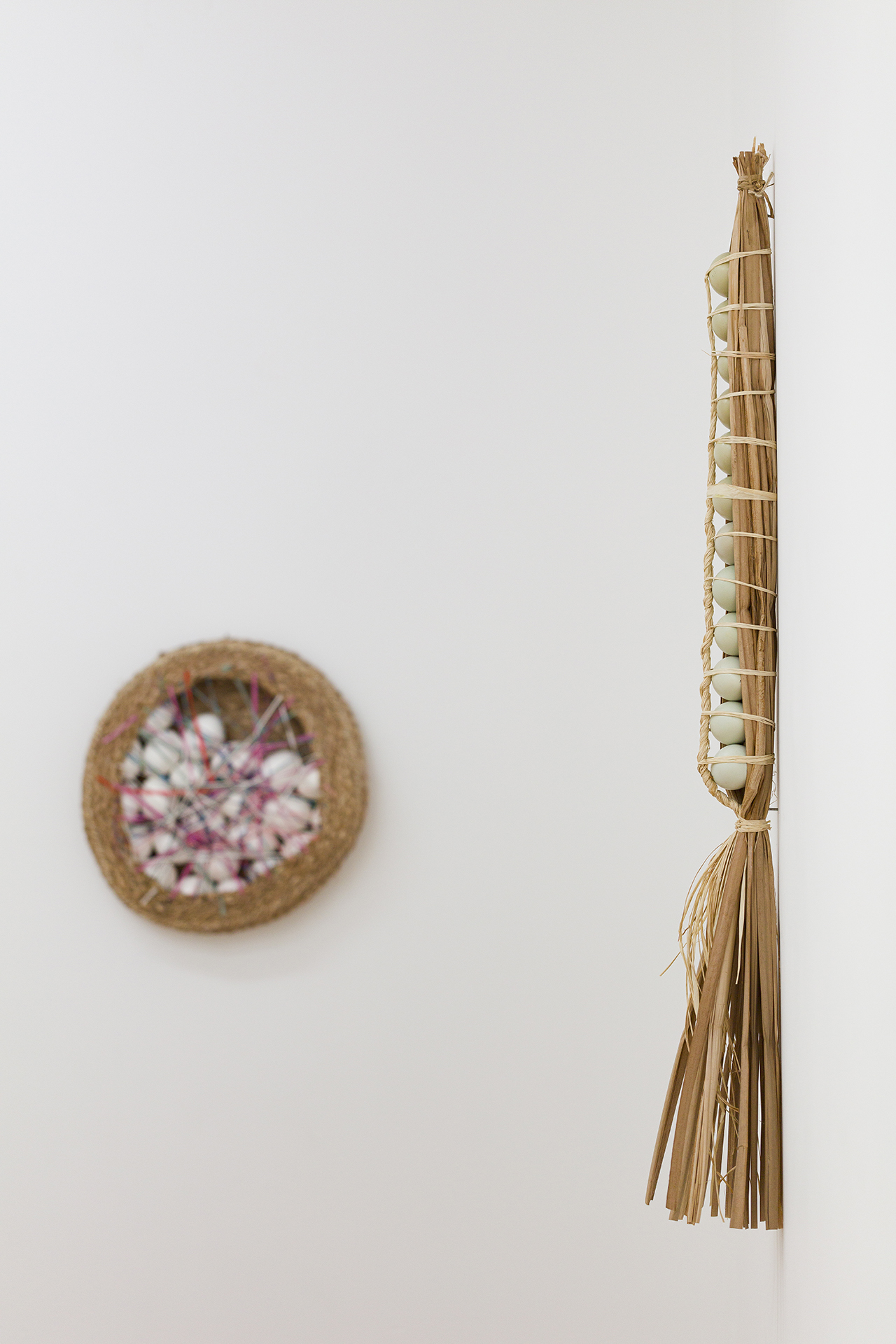 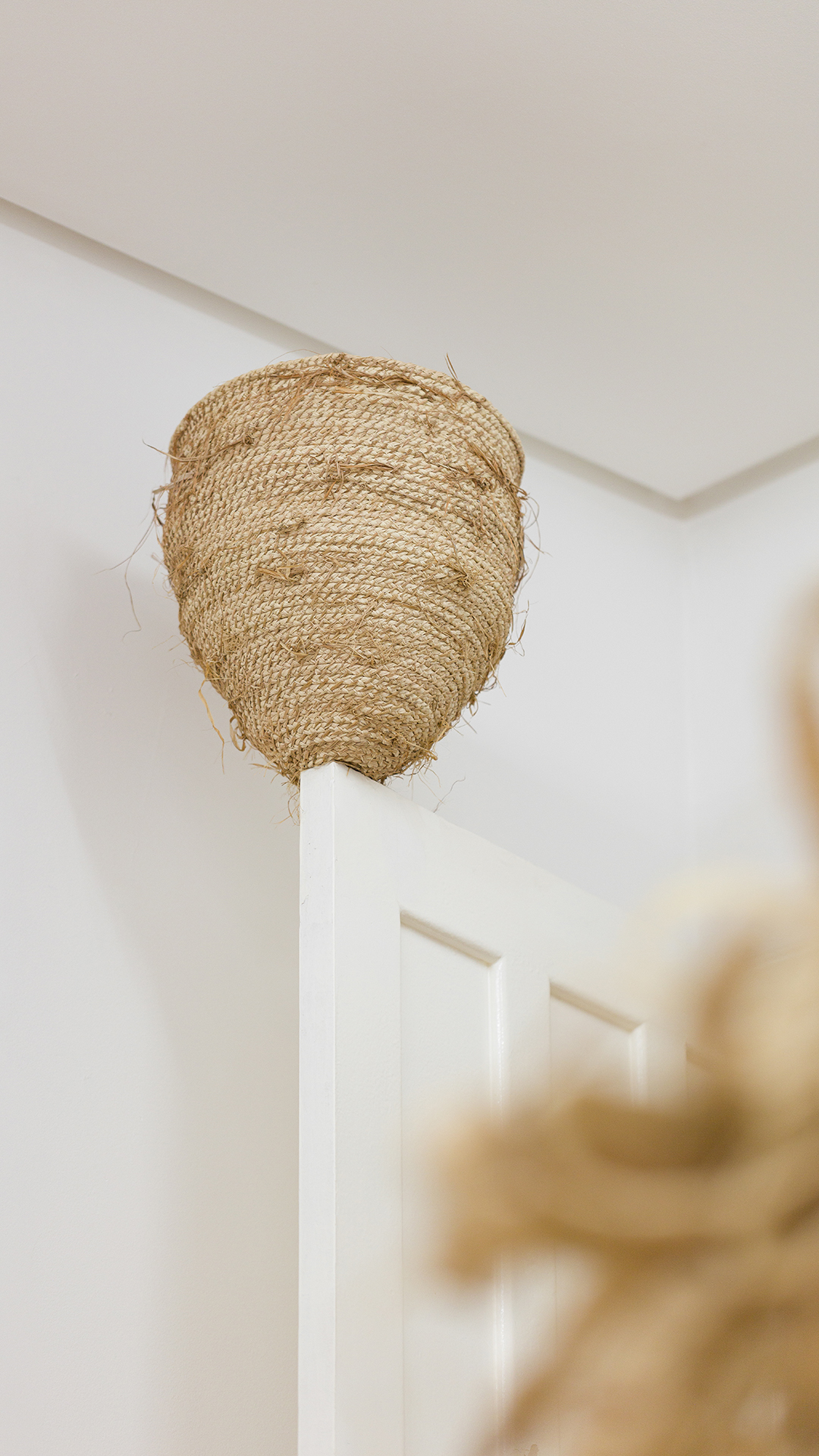 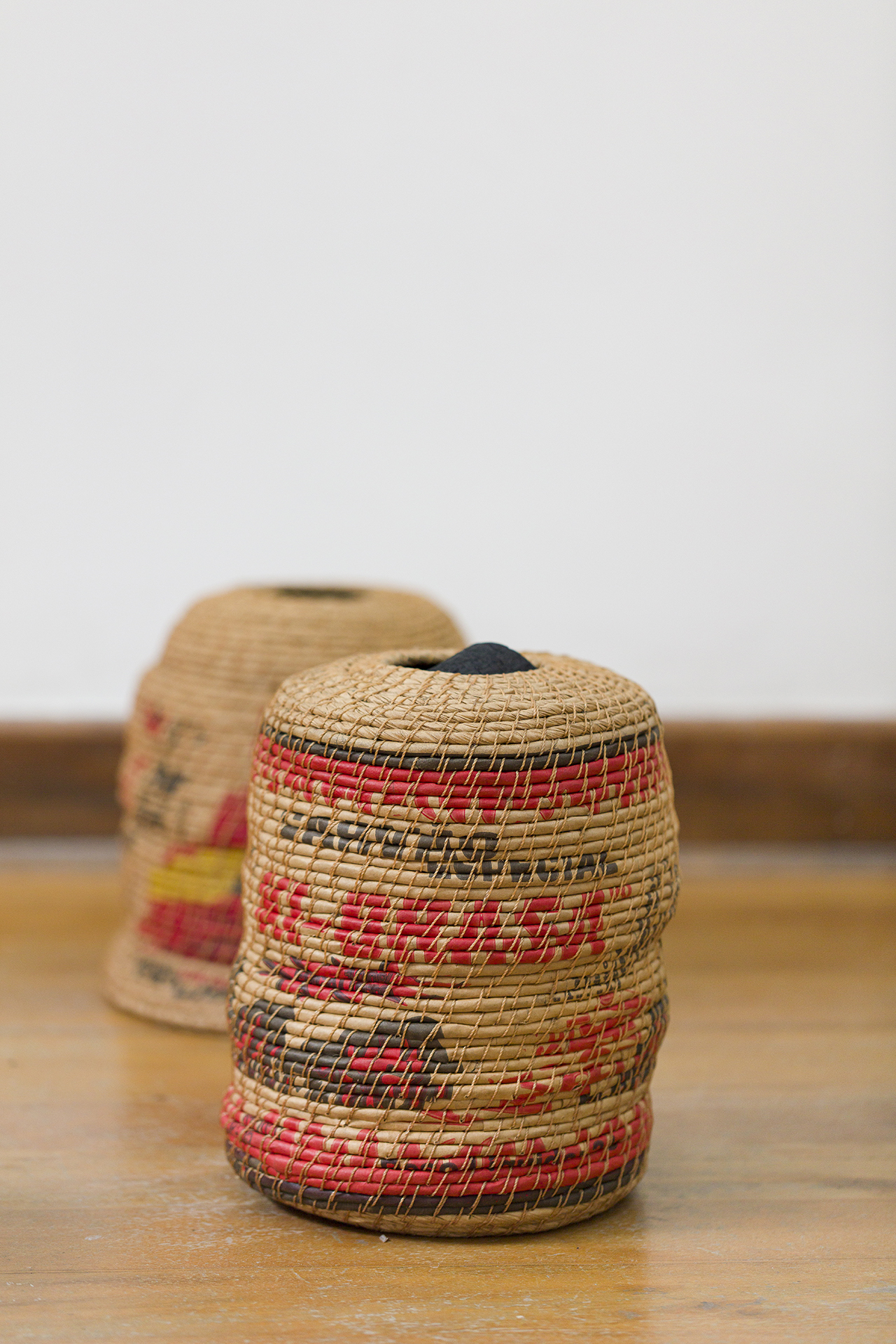 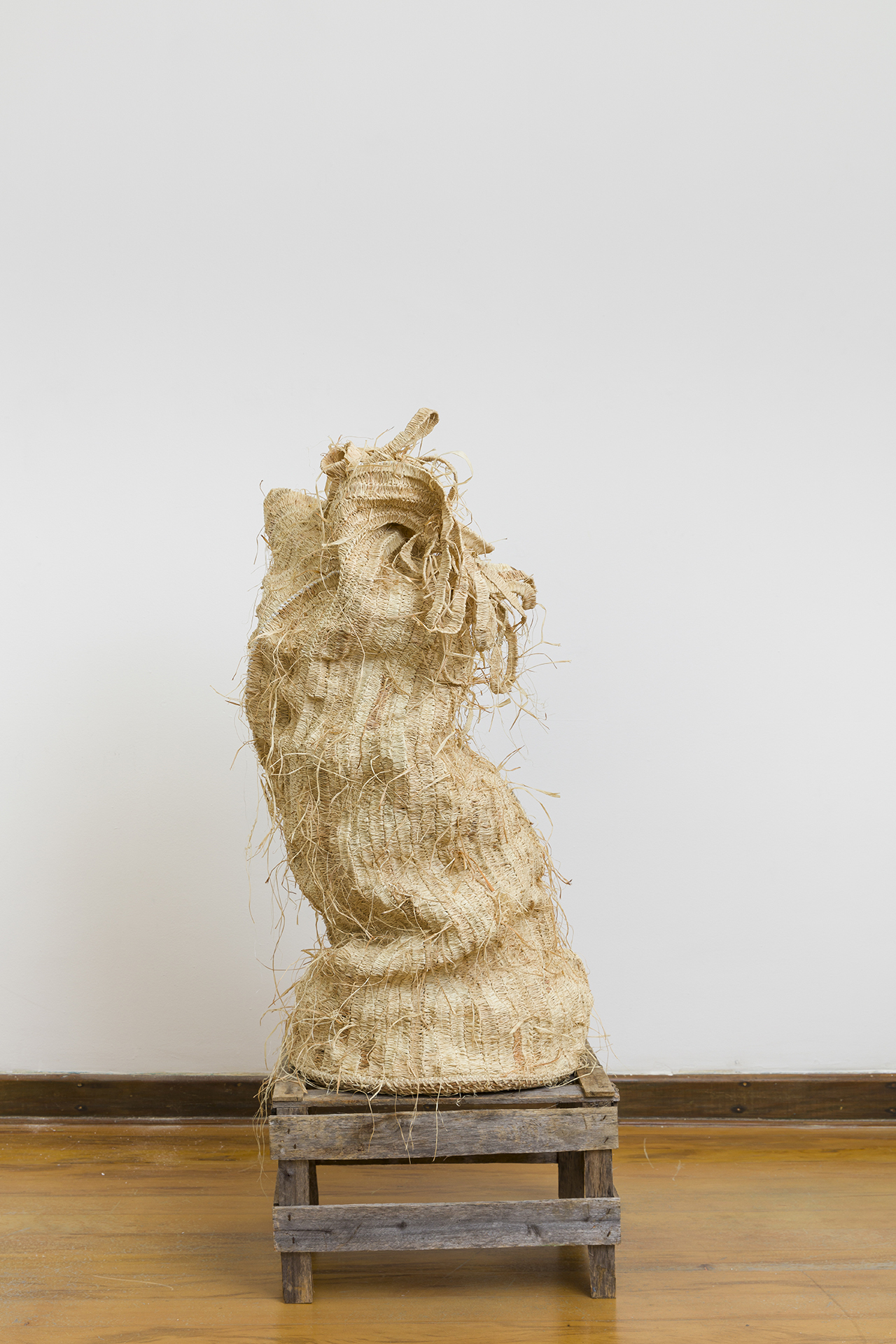 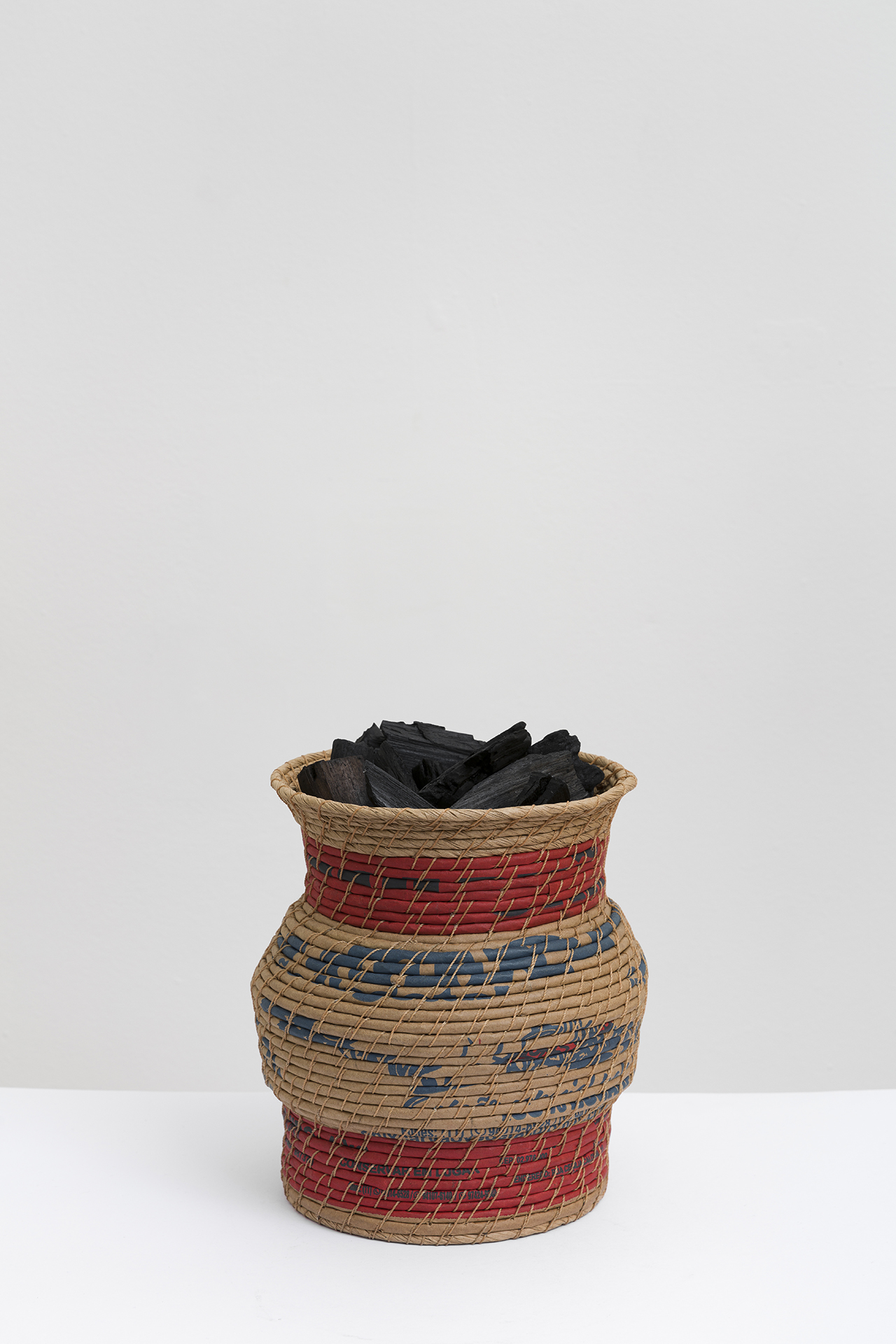 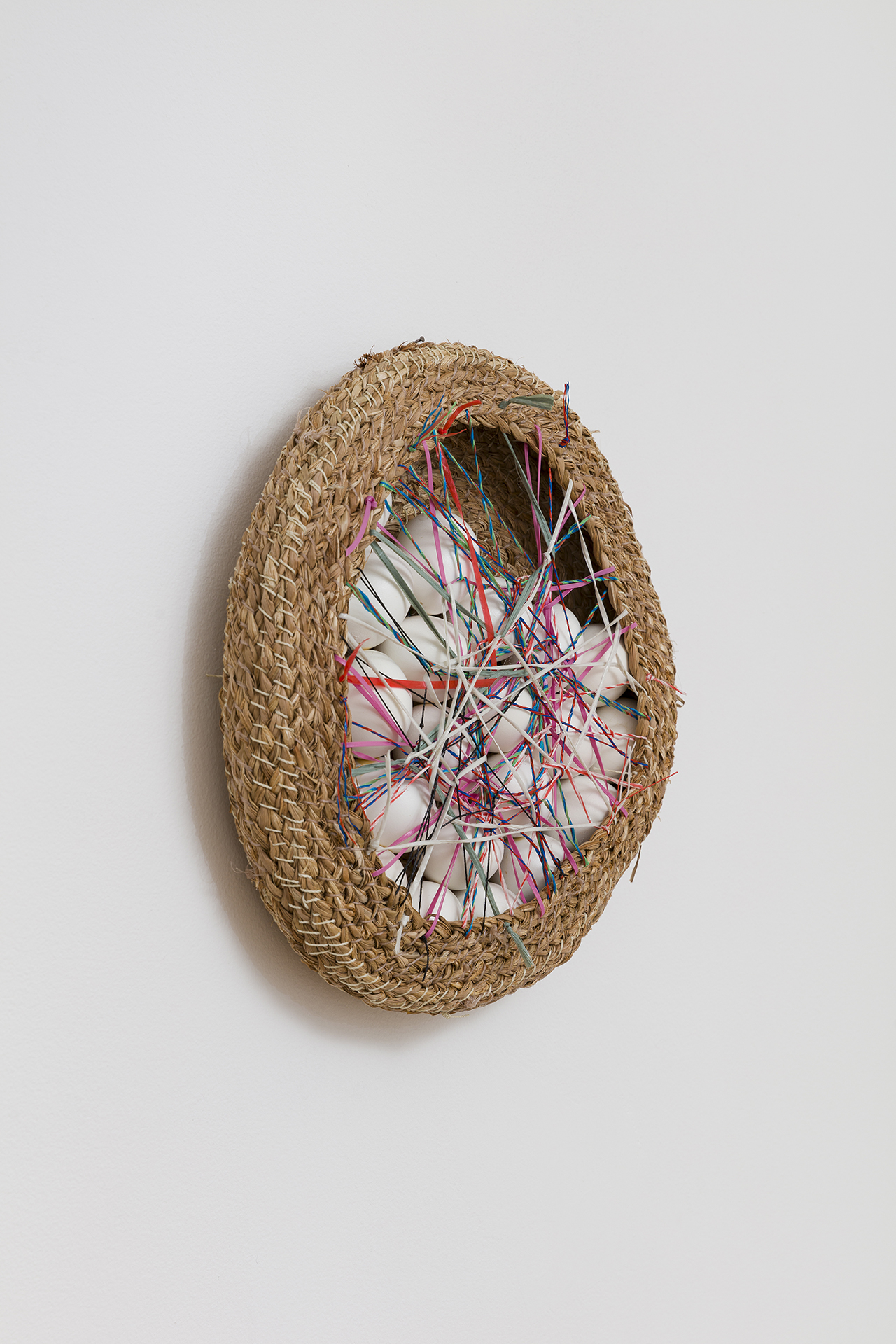 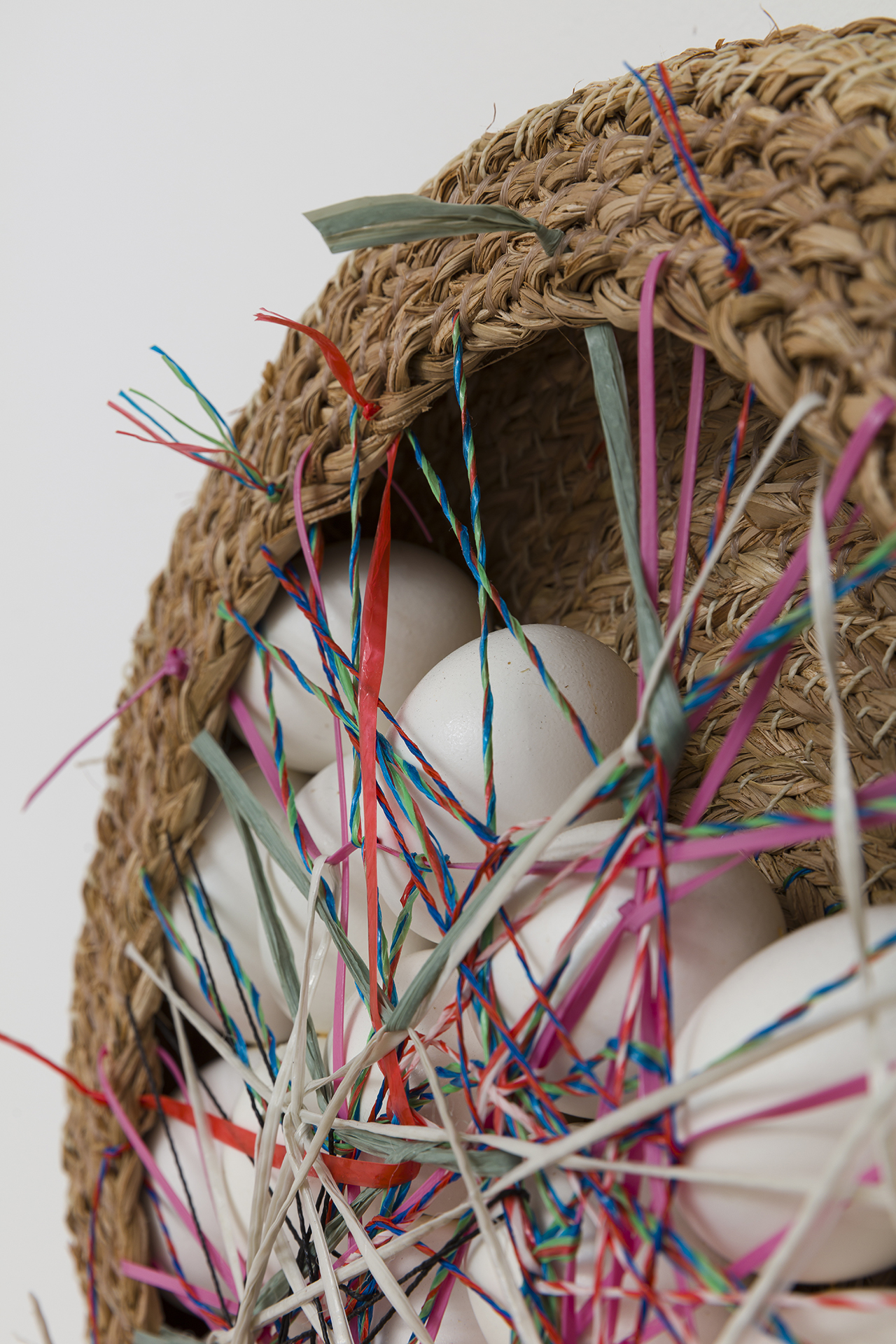 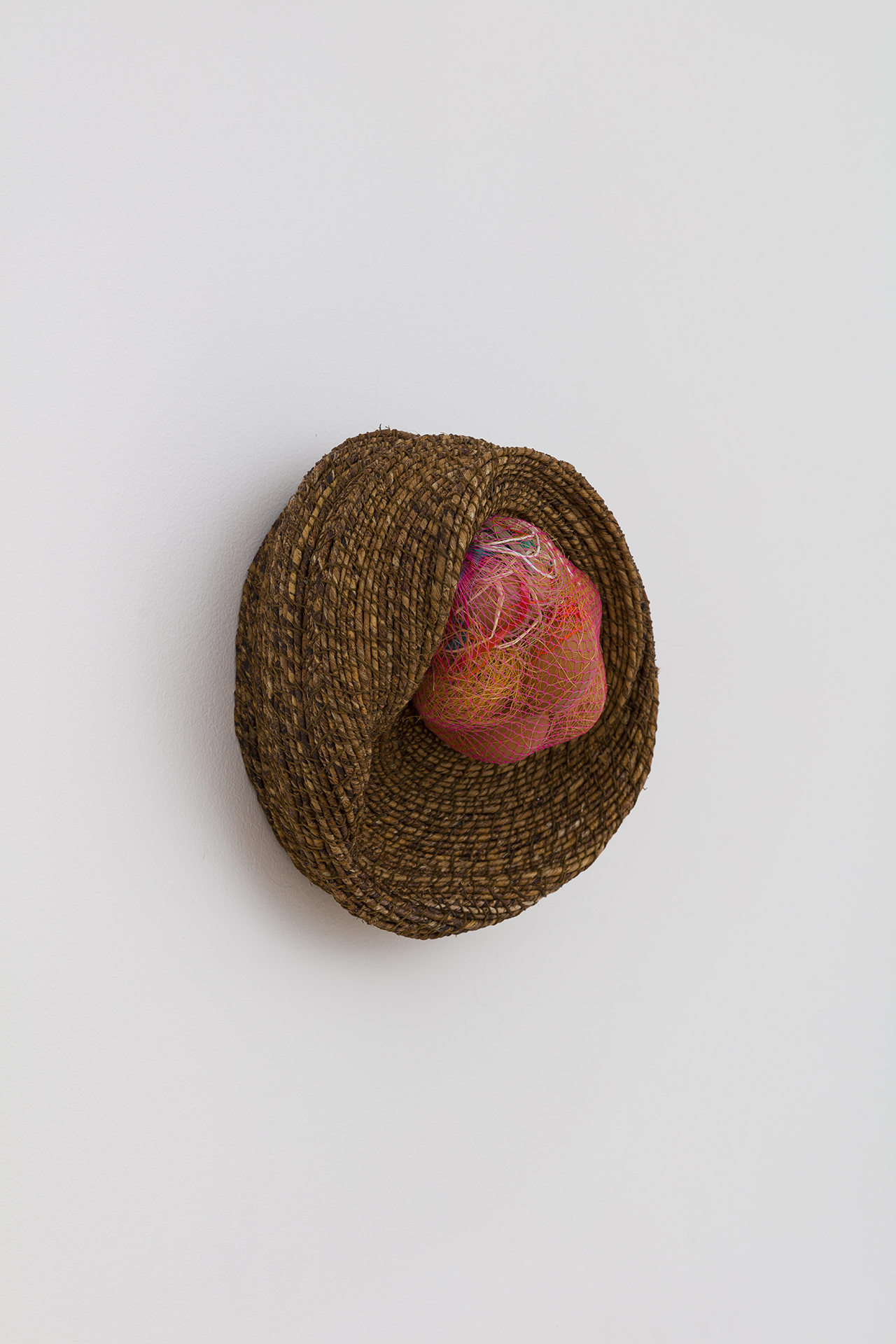 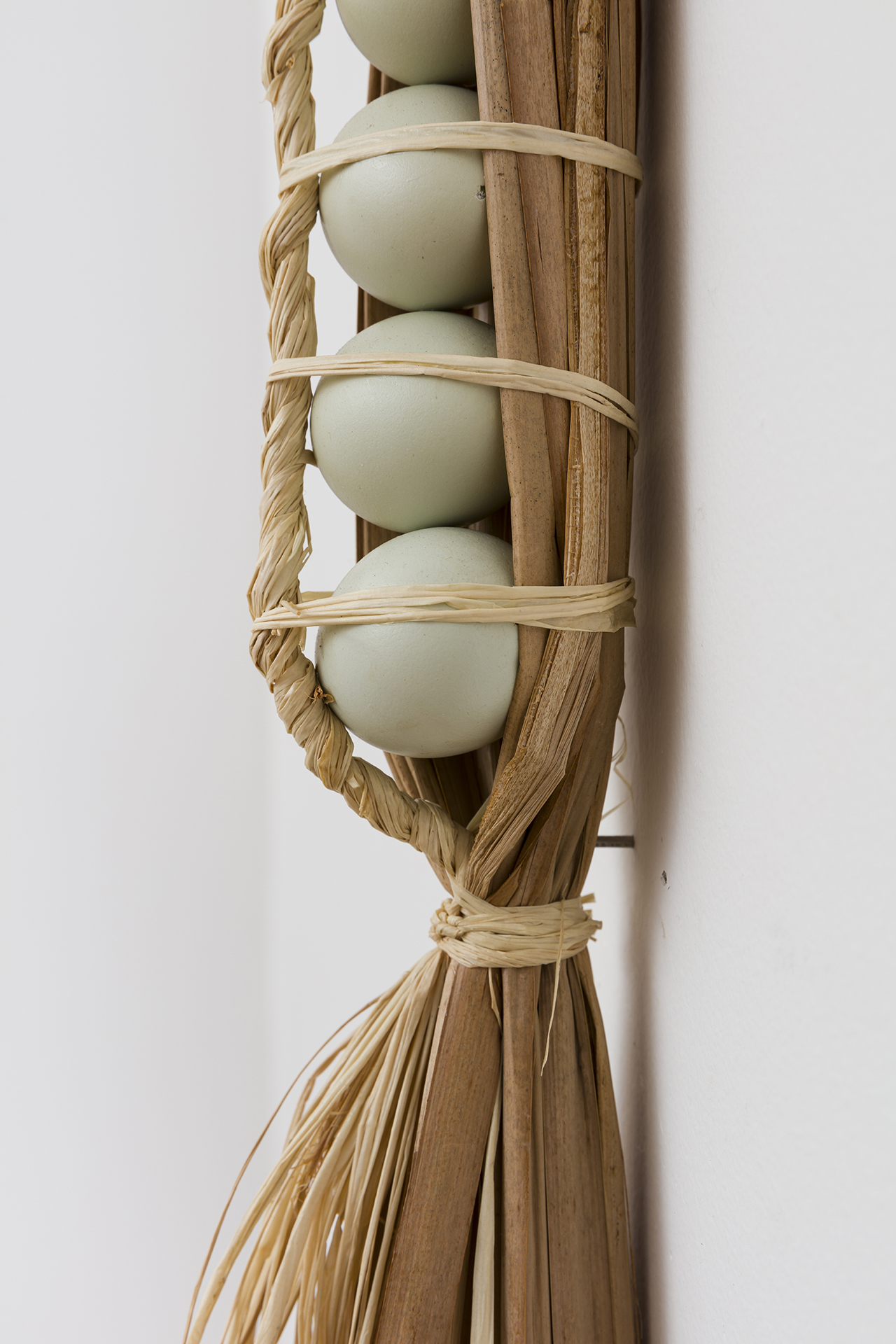 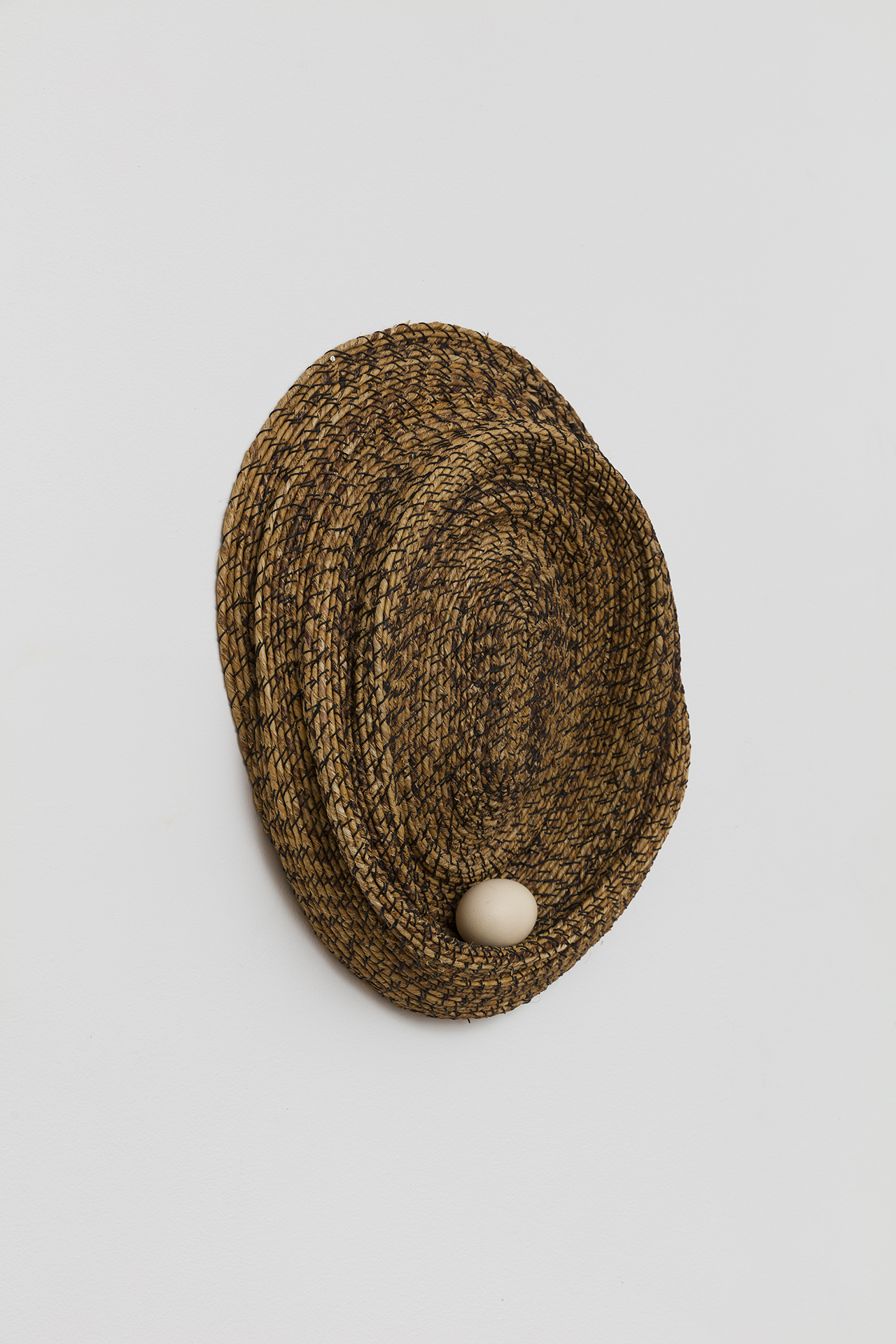 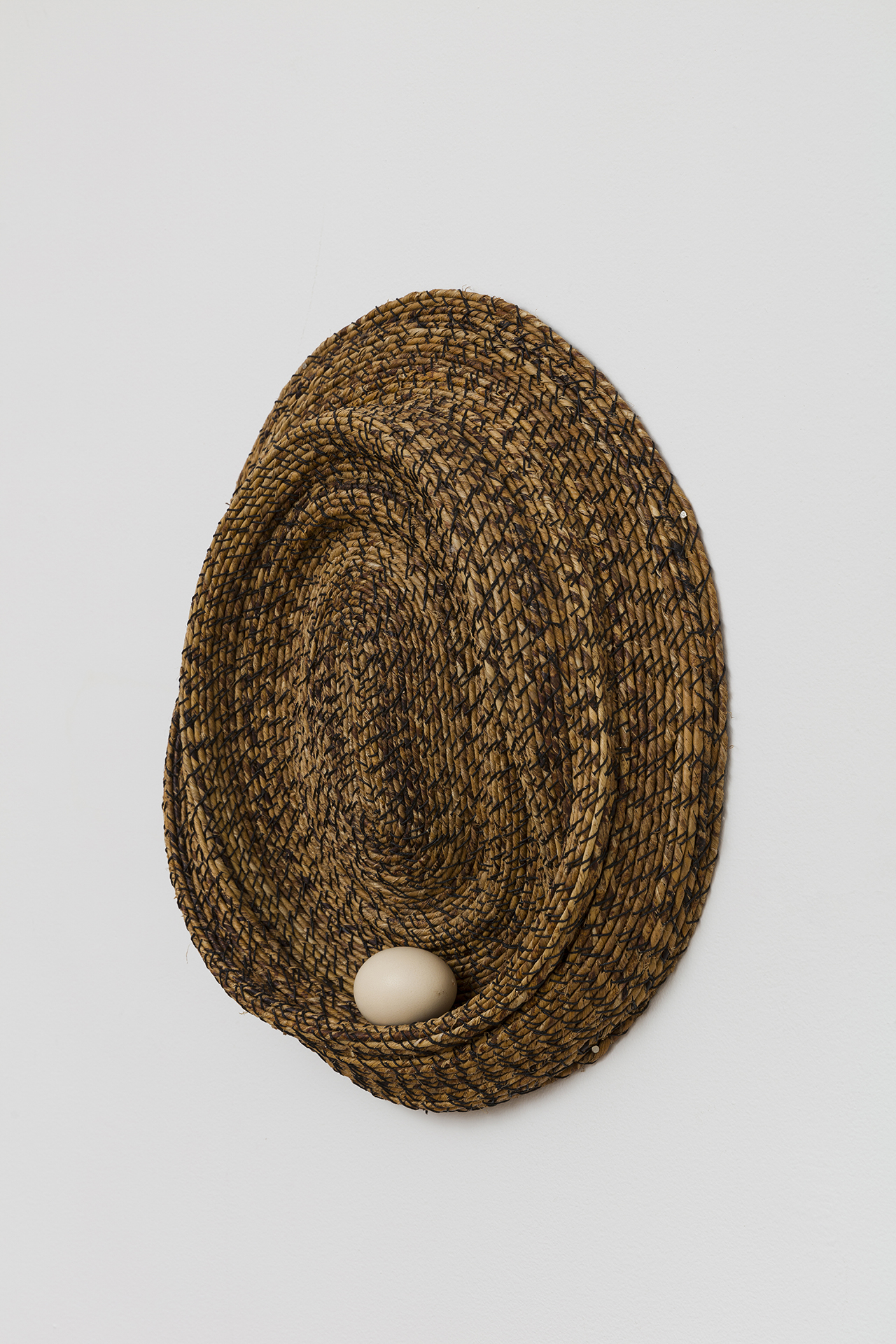 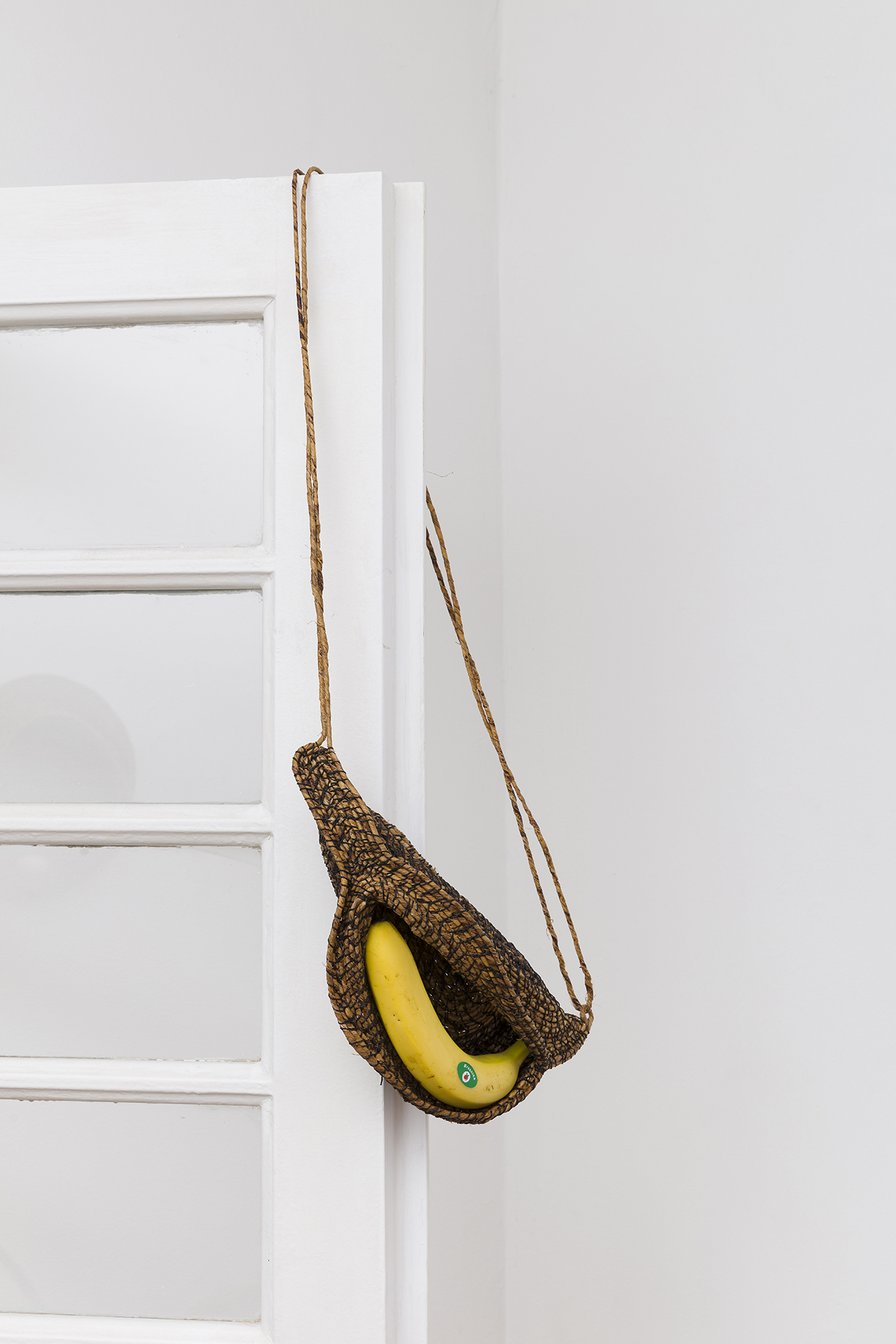 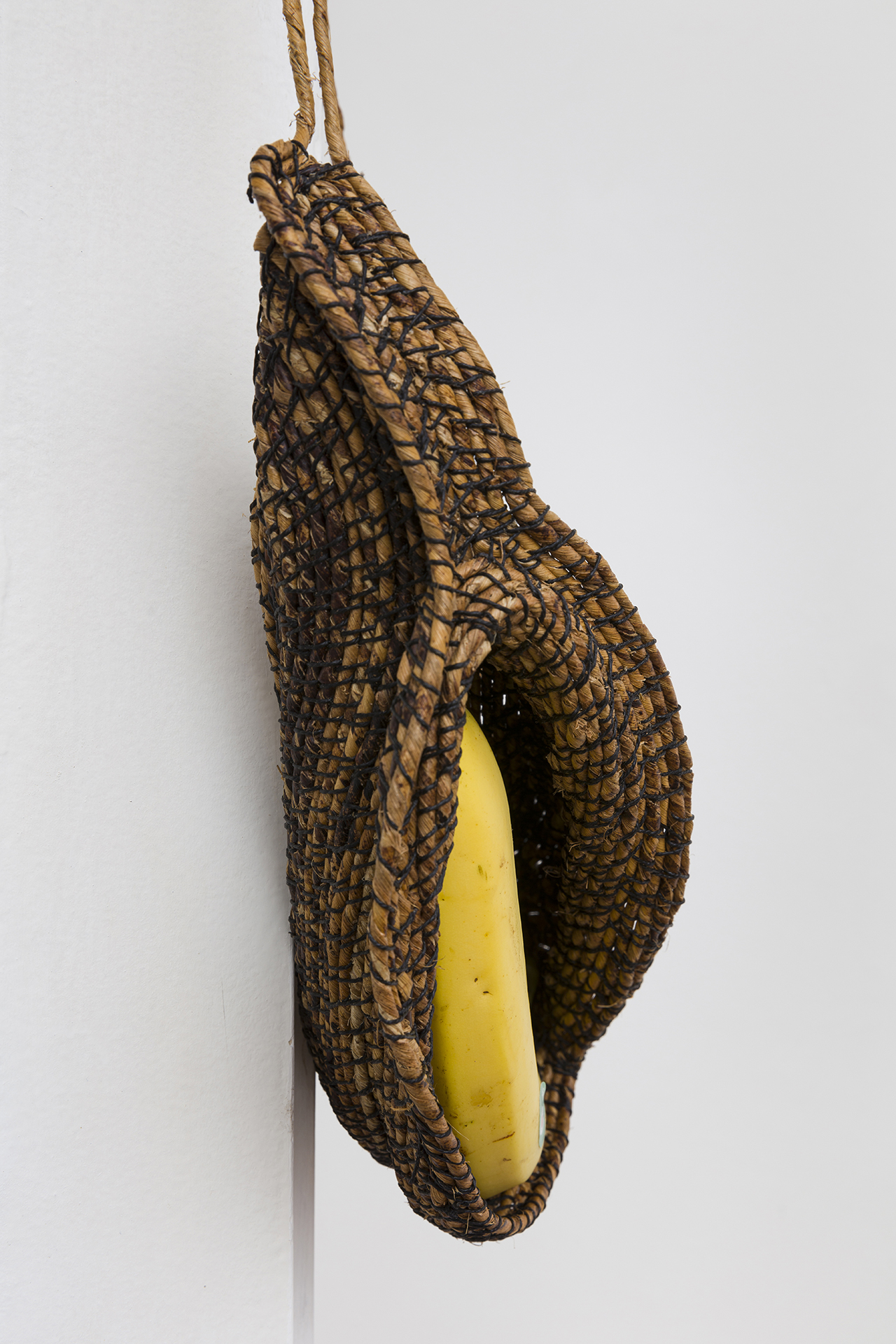 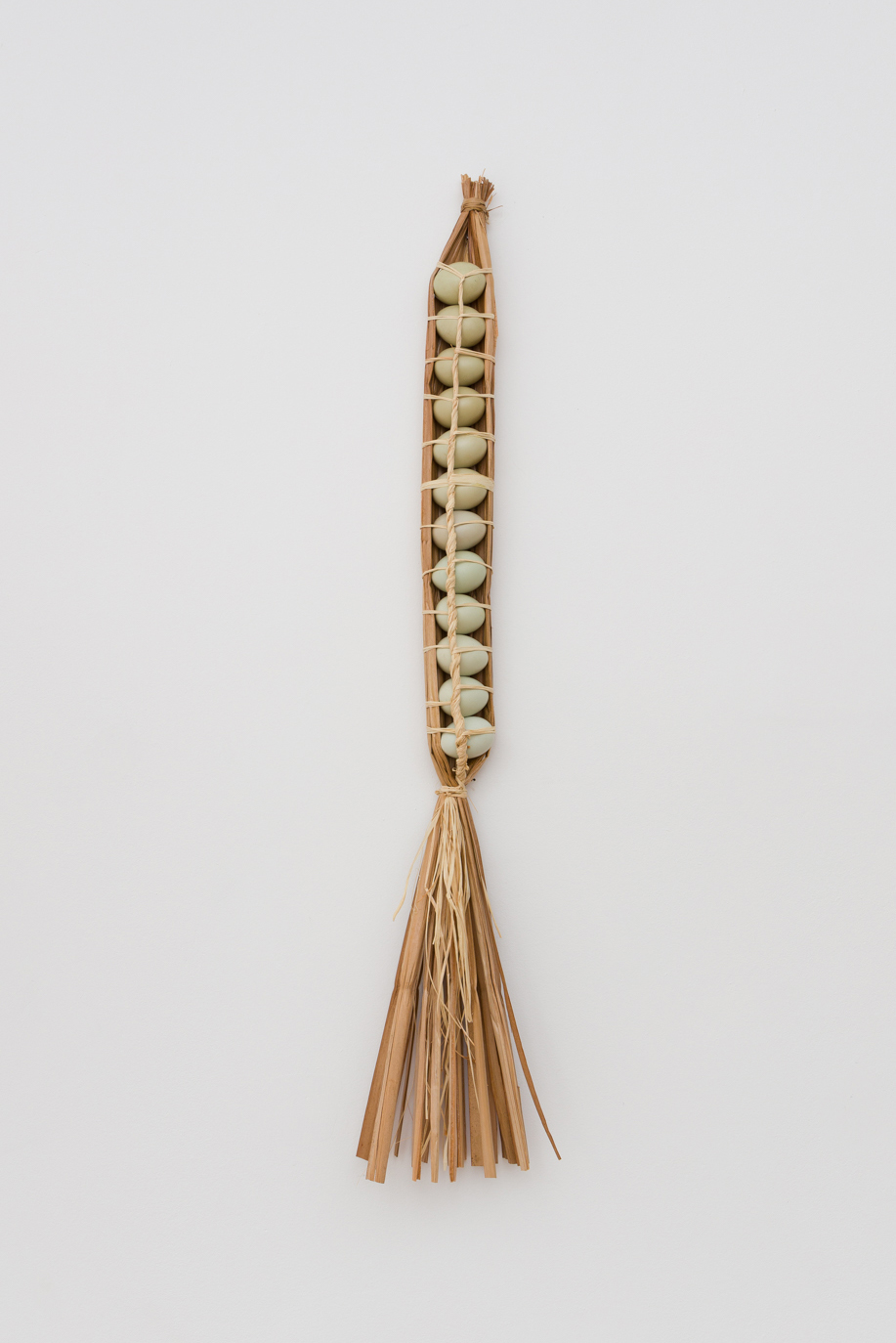 From May 6th - June 6th at C.A.M.A. space (Alameda Lorena 1257, casa 4 – Jardim Paulista, São Paulo) is on view the exhibition “Brunches no Wonderwerk” by Dan Coopey.

Around the time of the industrial revolution, as handcraft gave way to machines, a radical change happened in how goods were carried and stored. From pragmatic objects, receptacles were given an additional responsibility: persuading others to purchase the product within.

A new body of work by São Paulo-based British artist Dan Coopey traces this moment and its long shadows, as objects have become branding exercises; the food we eat, our essential objects of survival, packaged in capitalist narratives and invocations to spend money.

In an untitled series Coopey has taken various paper charcoal sacks and interwoven them into individual baskets. The original designs – each different but containing a similar lexicon of flame and fireside motifs and a palette of red and black – become abstracted as they pass in and out of Coopey’s paper coils and wax-coated polyester stitching. This transformation results in a surface design more akin to the patterning which decorated pre-industrial containers. The sculptures have an ancient, primordial feel to them, invoking the earliest moments of civilisation and the productive use of fire. This is reiterated in Coopey’s choice of title for the exhibition: the Wonderwerk caves in the Northern Cape Province of

South Africa contain the earliest evidence of human controlled use of fire (the names extrapolated into a brand, the kind that might adorn a certain type of fashionable eatery familiar globally). Coopey has returned the charcoal to the container; the burnt eucalyptus a testament to the environmental destruction that was accelerated in this march to modernity.

Mounted on a market crate, is Stack, Coopey’s largest self-woven work to date. Abstract in nature, its raffia woven edges left purposely unfinished, sewn together with plastic thread to form a vague column, it is a self-deprecating monument to vernacular design; to hobbyism taken to the point of obsession in which practical skills are allowed the freedom to create seemingly purposeless objects. At the same time, it recalls a giant nest in its roughness, a reference brought out in a moriche palm and raffia-woven sculpture installed seemingly precariously on the top ledge of a door in the gallery (reminiscent of how storks have adapted their home building to urban environments). Baskets are an original technology, understood to predate pottery, and nests might be understood to be the original baskets; a visual confusion into the status of these objects that Coopey here burlesques.

Coopey grew up in rural England, his grandparents smallholder farmers, his grandfather adept at craftwork and all things practical. This biographical heritage is recalled in a further series of basketary works in which eggs feature. Bought from a family similar to Coopey’s own, traders in the local market near the artist’s apartment in São Paulo, the eggs are seen carried in a variety of intricate ways. In one, a single egg balances seemingly precariously on the fold of an oscillating weave, its cream surface bold against the dark brown of the banana fibre; in another, a dozen eggs, their particular blue hue picked out from the array stacked up on the market stall, are held in row, secure in a palm and raffia construction over a metre in length. In a third work, two dozen white eggs are strapped into a palm-woven bowl-shaped sculpture by a variety of coloured plastic threads organised as a safety mesh. The market sells the eggs individually, though invariably they are bought in units of half a dozen, a dozen, two dozen or more: in the supermarket, this system is standardised. Interrogating his own position as a European in Brazil, Coopey followed this unit of sale, an invisible form of colonialism, hangover from when the British currency contained 12 pennies to one shilling, a nonsensical tradition to have been carried across the modern world. Together these works play with, and stand in contrast to, the codified, monetised and colonialized slickness of design in modernity; barcoded and recorded as packaging and the products therein enter the liquid market of capital.