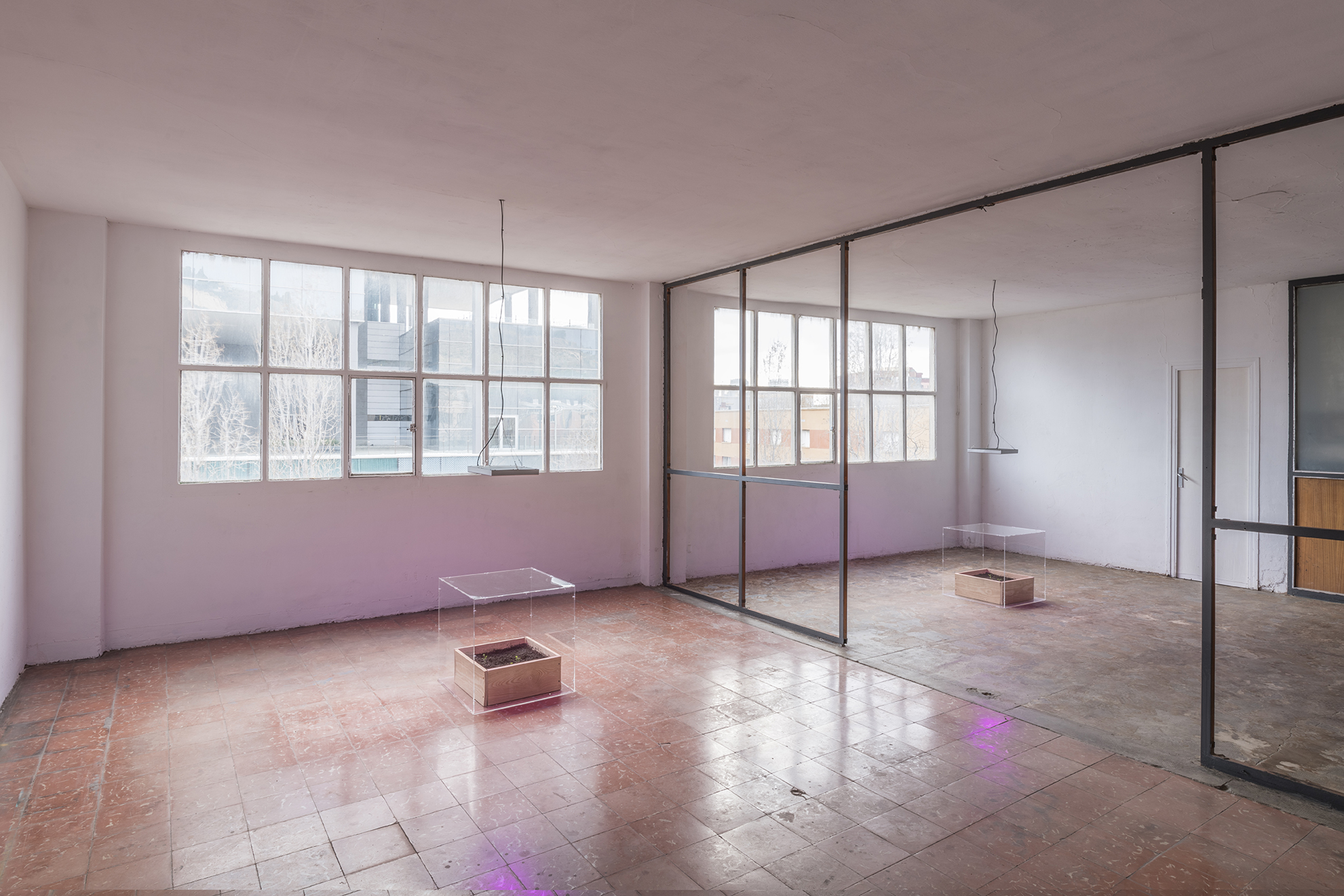 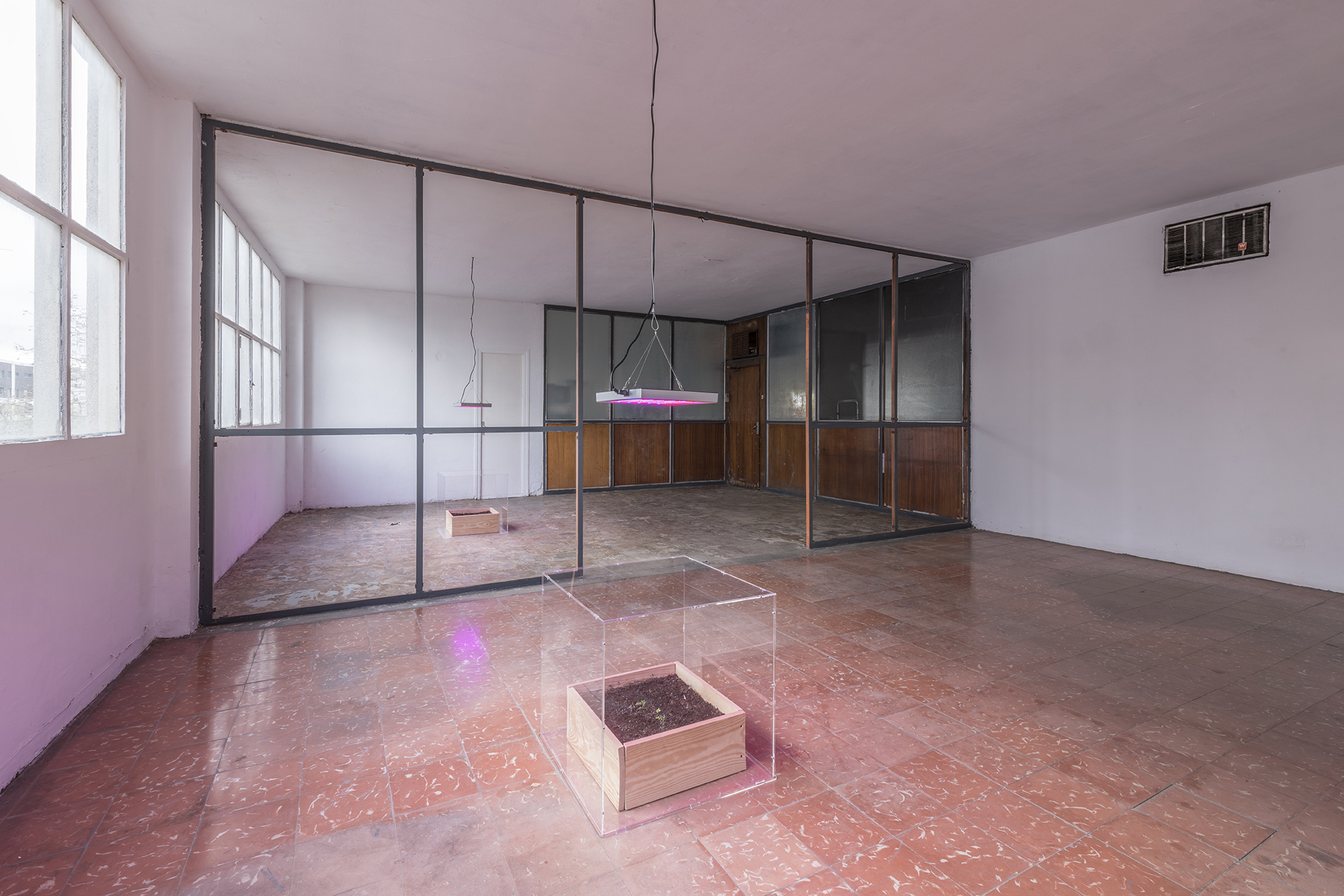 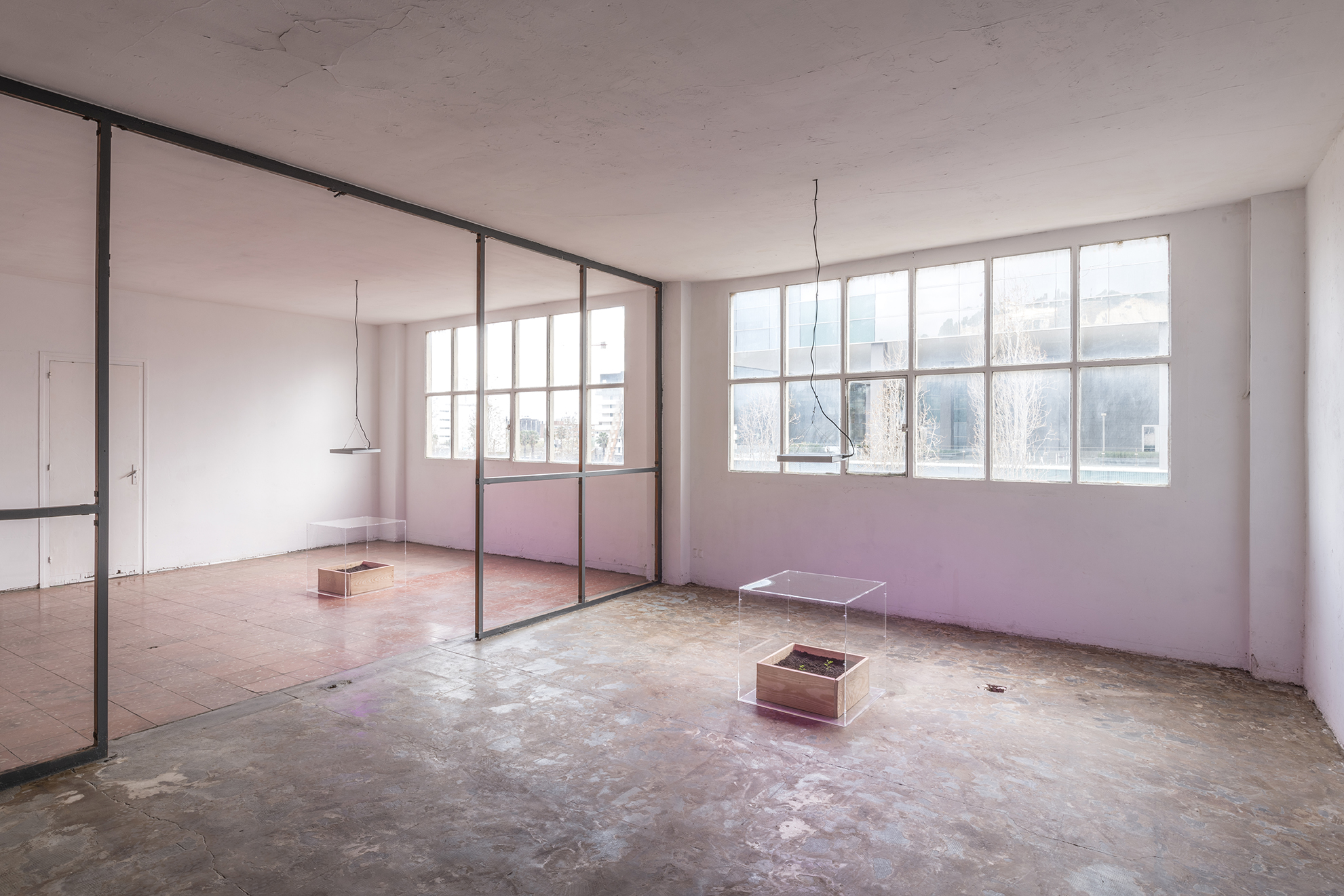 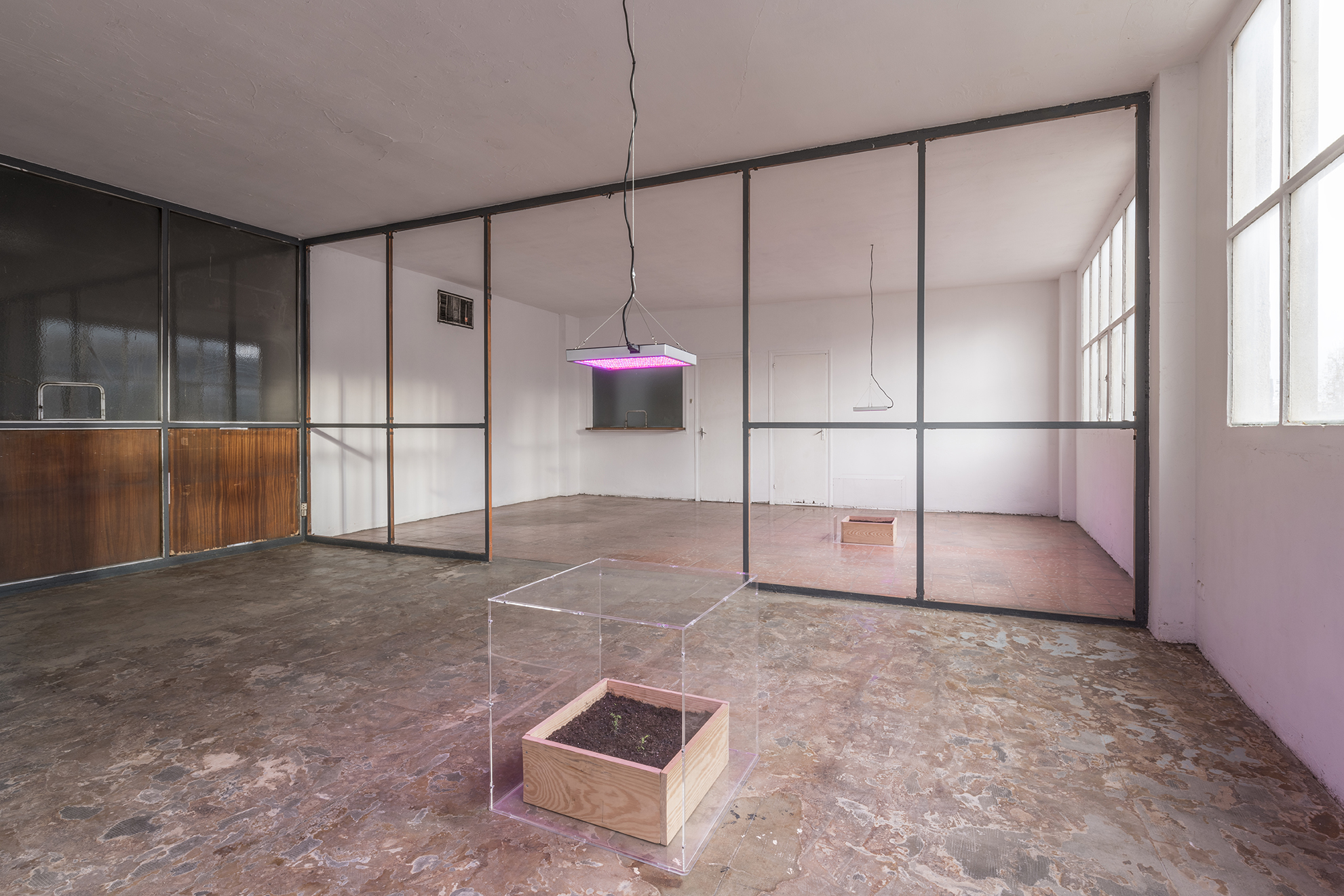 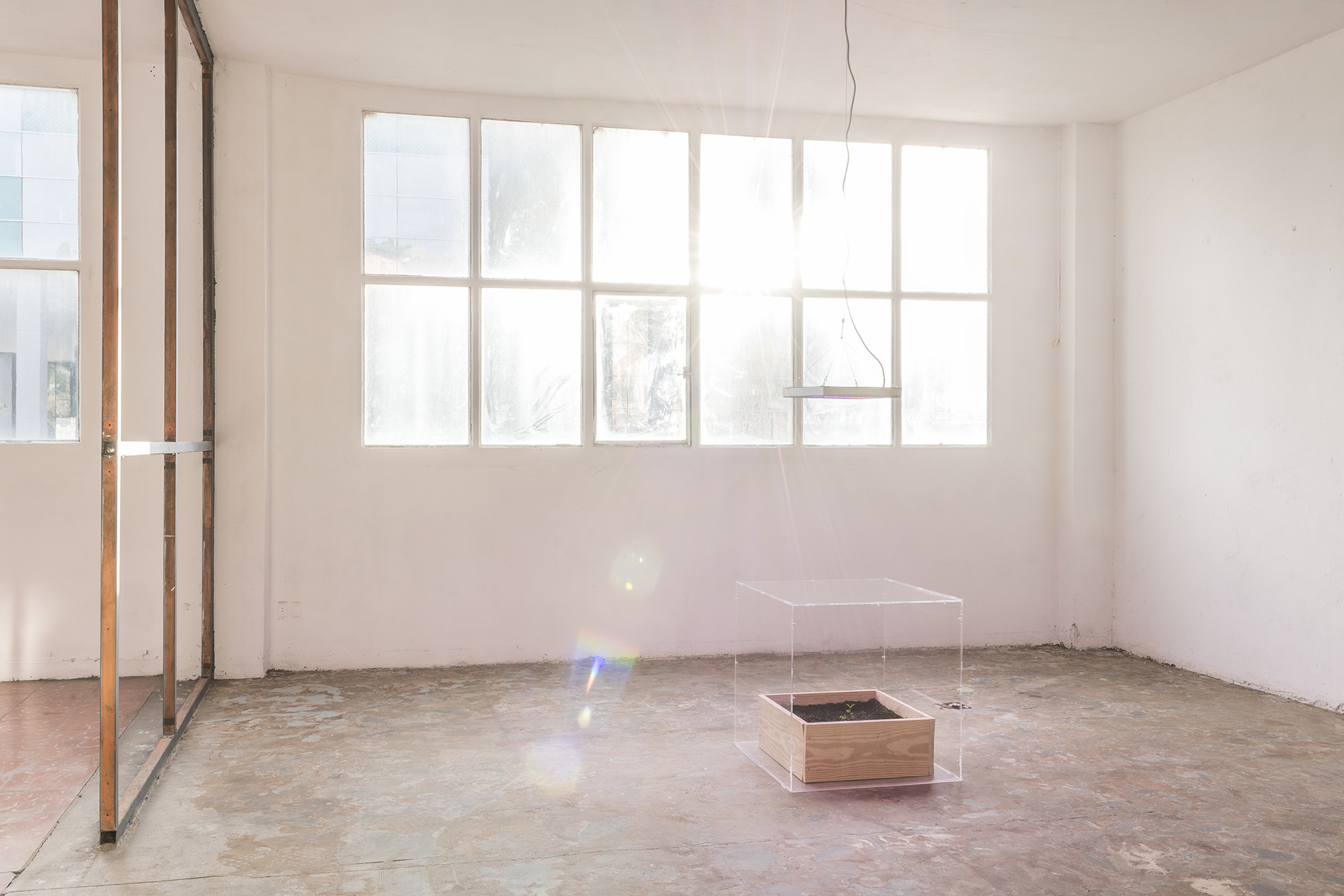 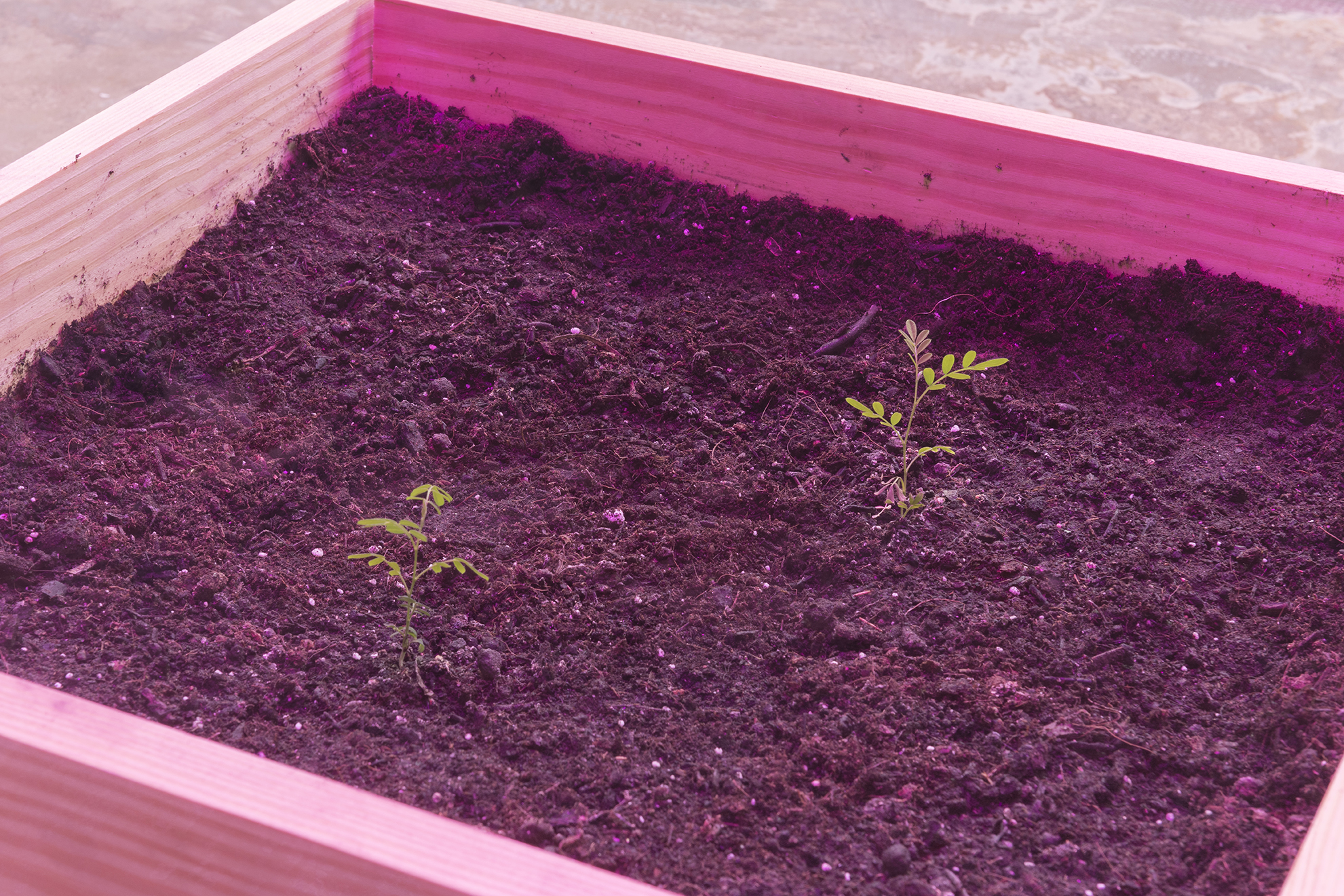 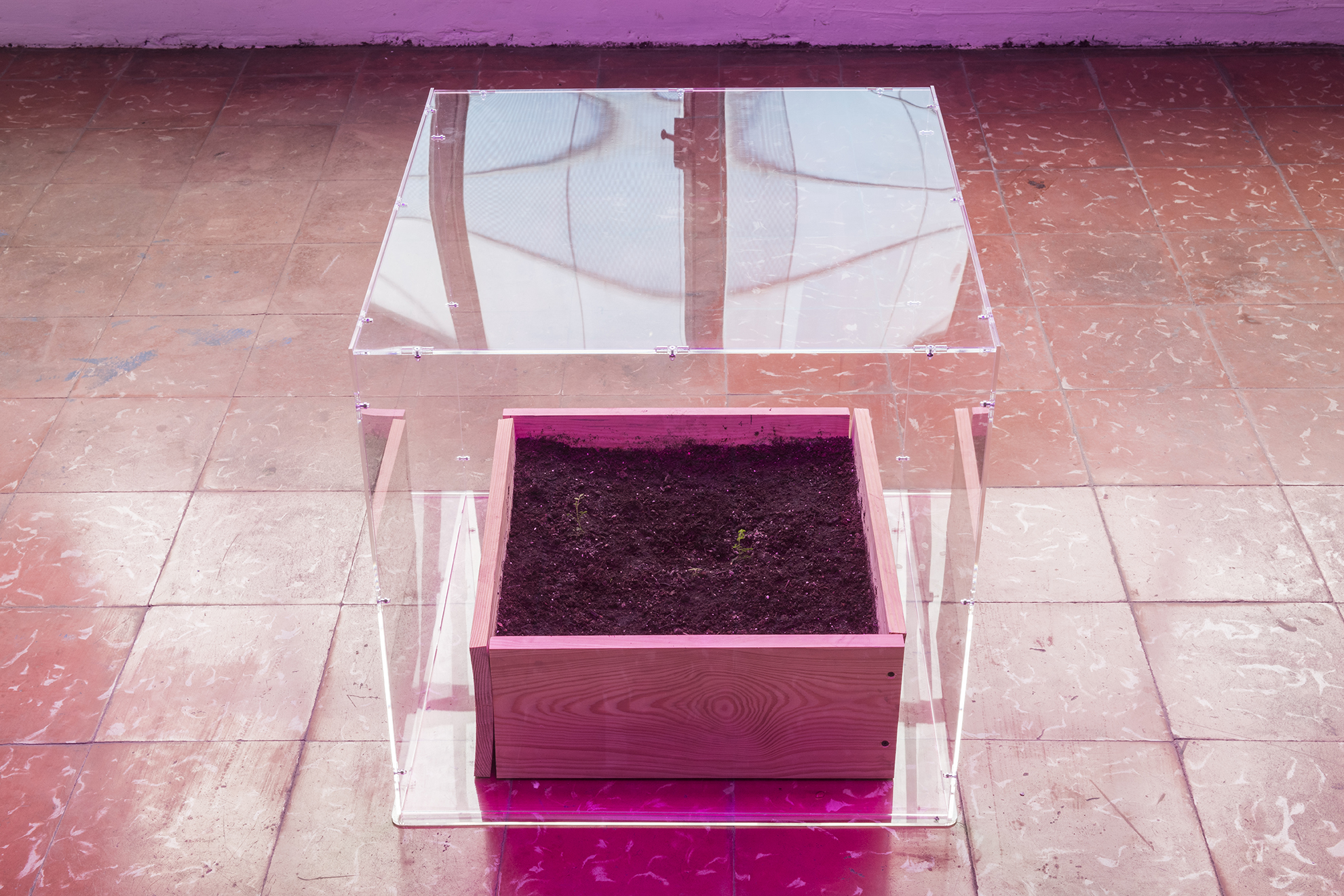 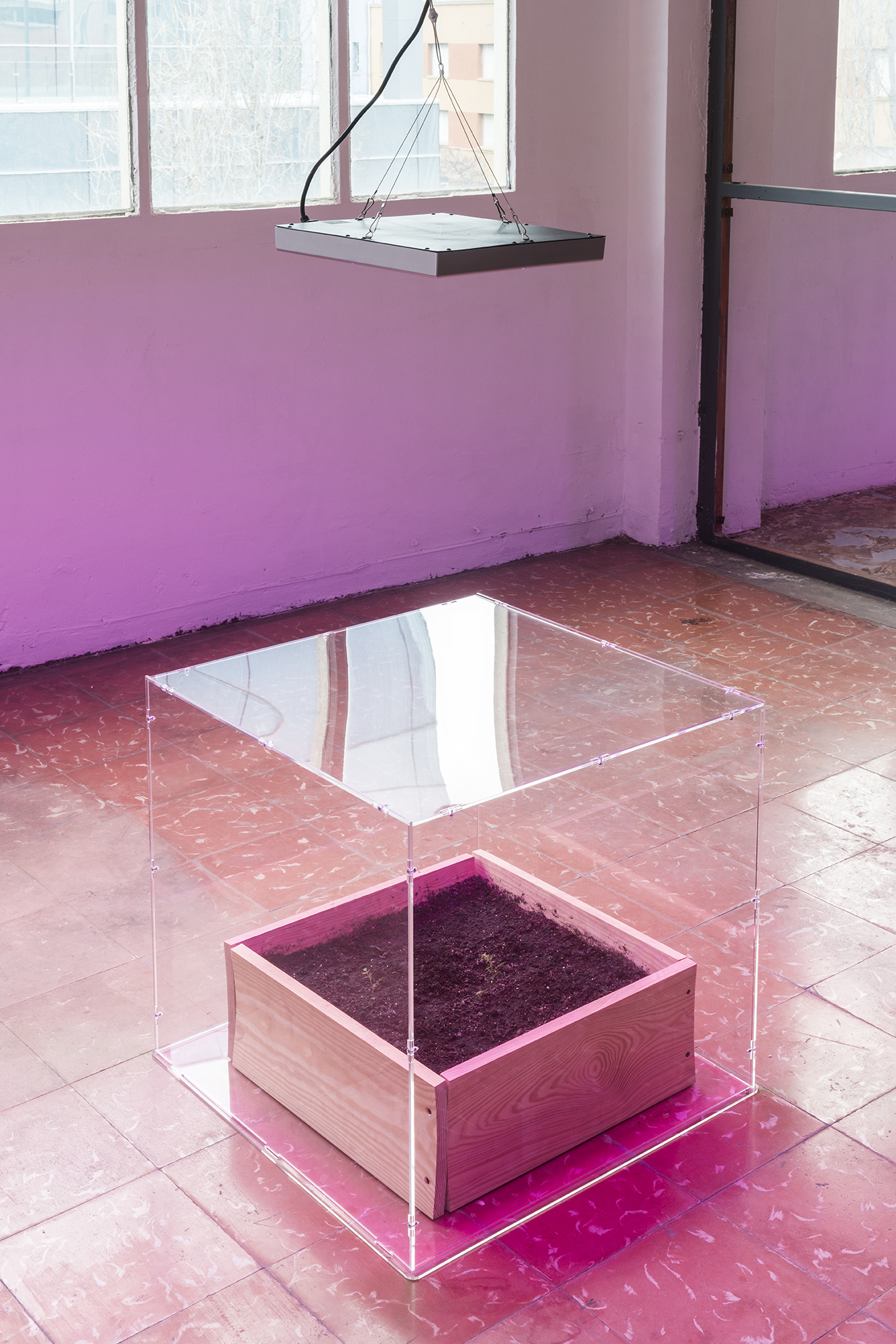 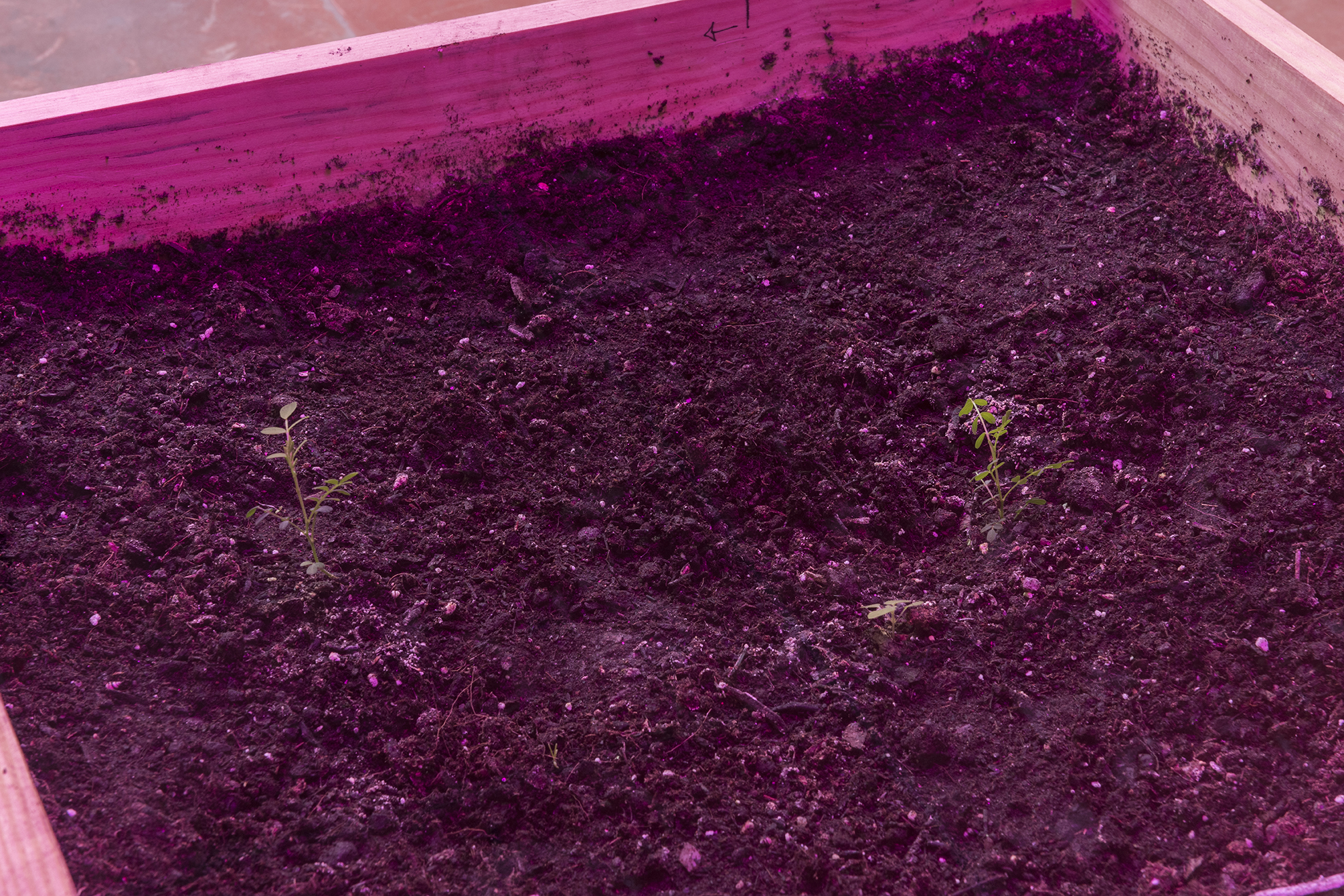 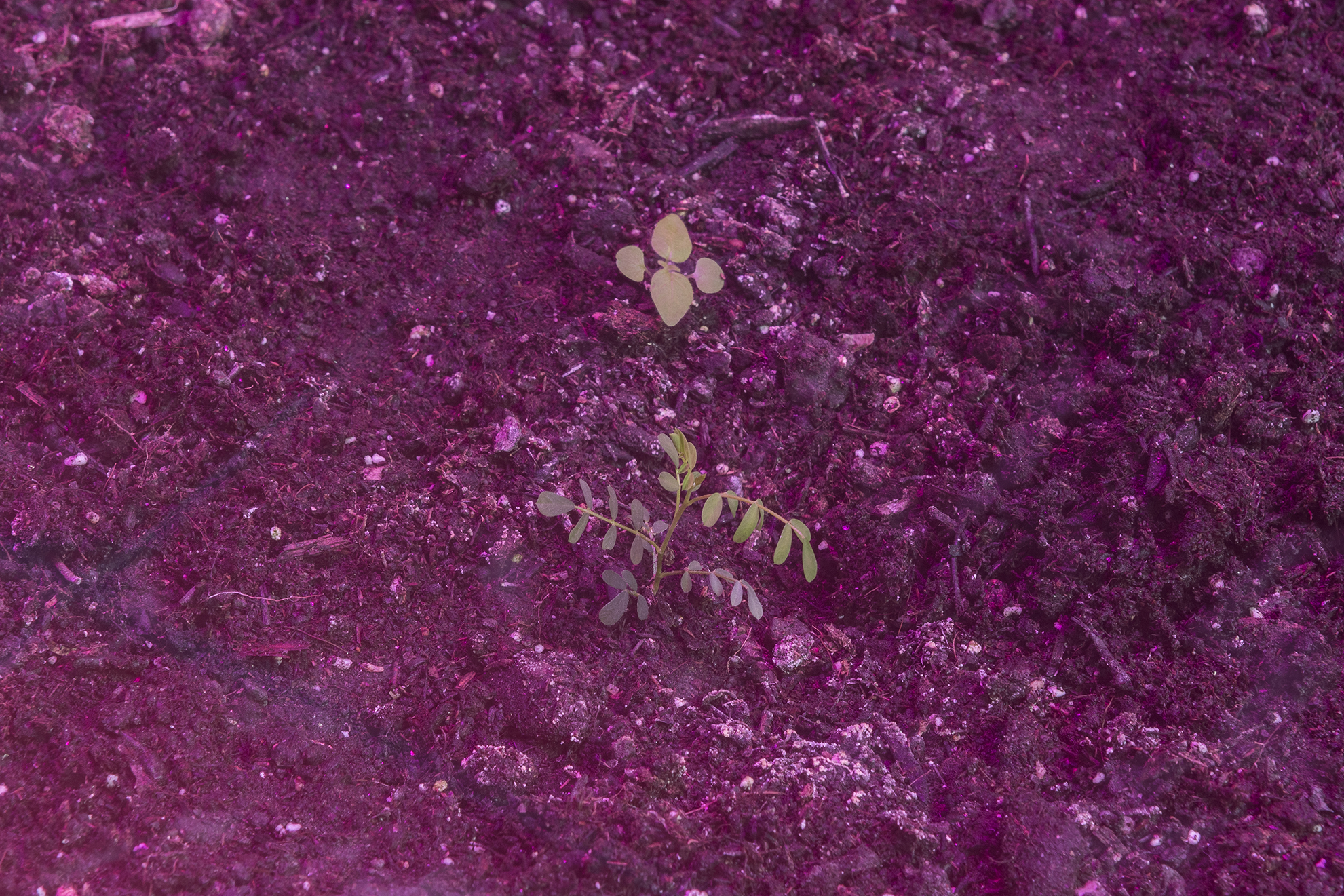 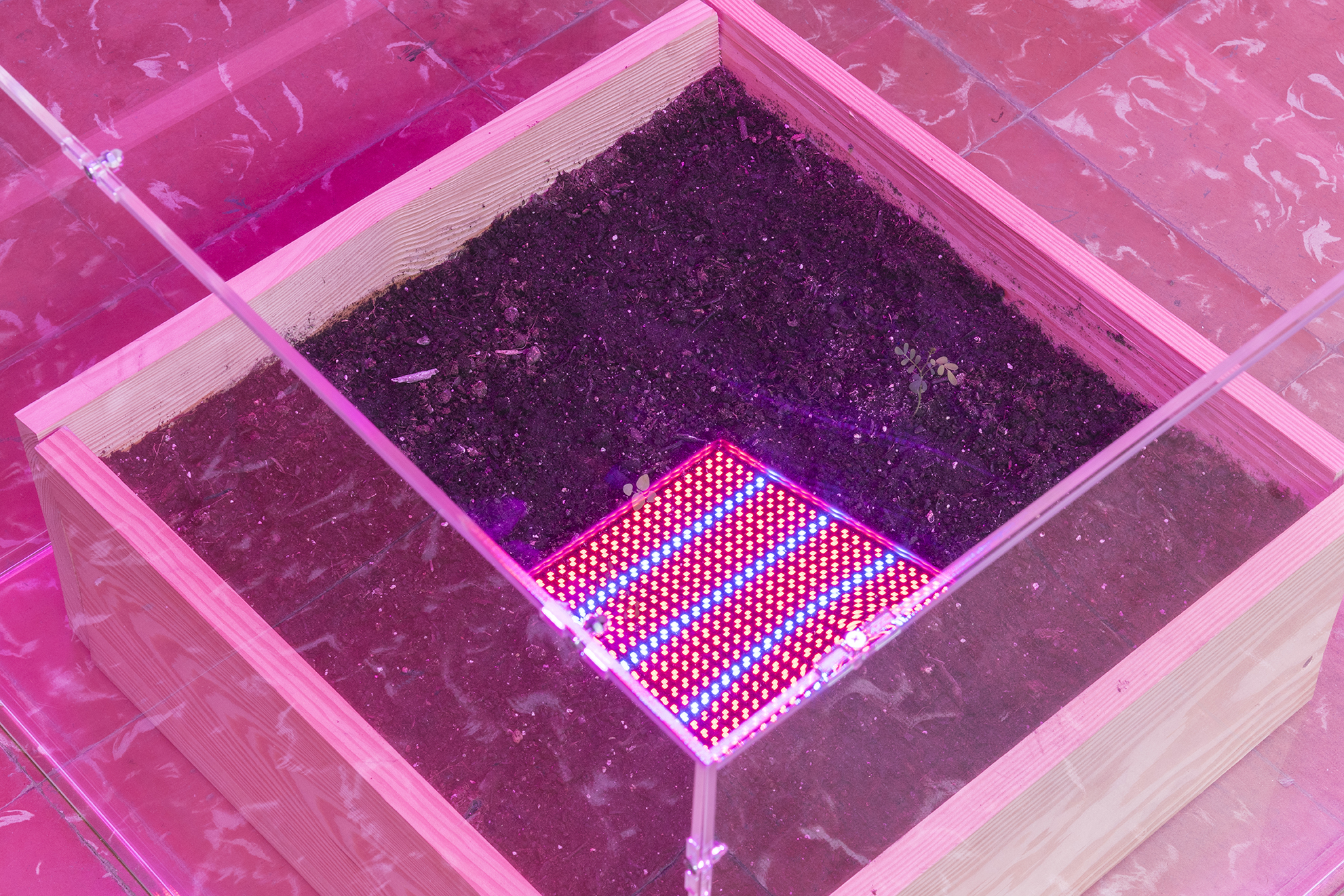 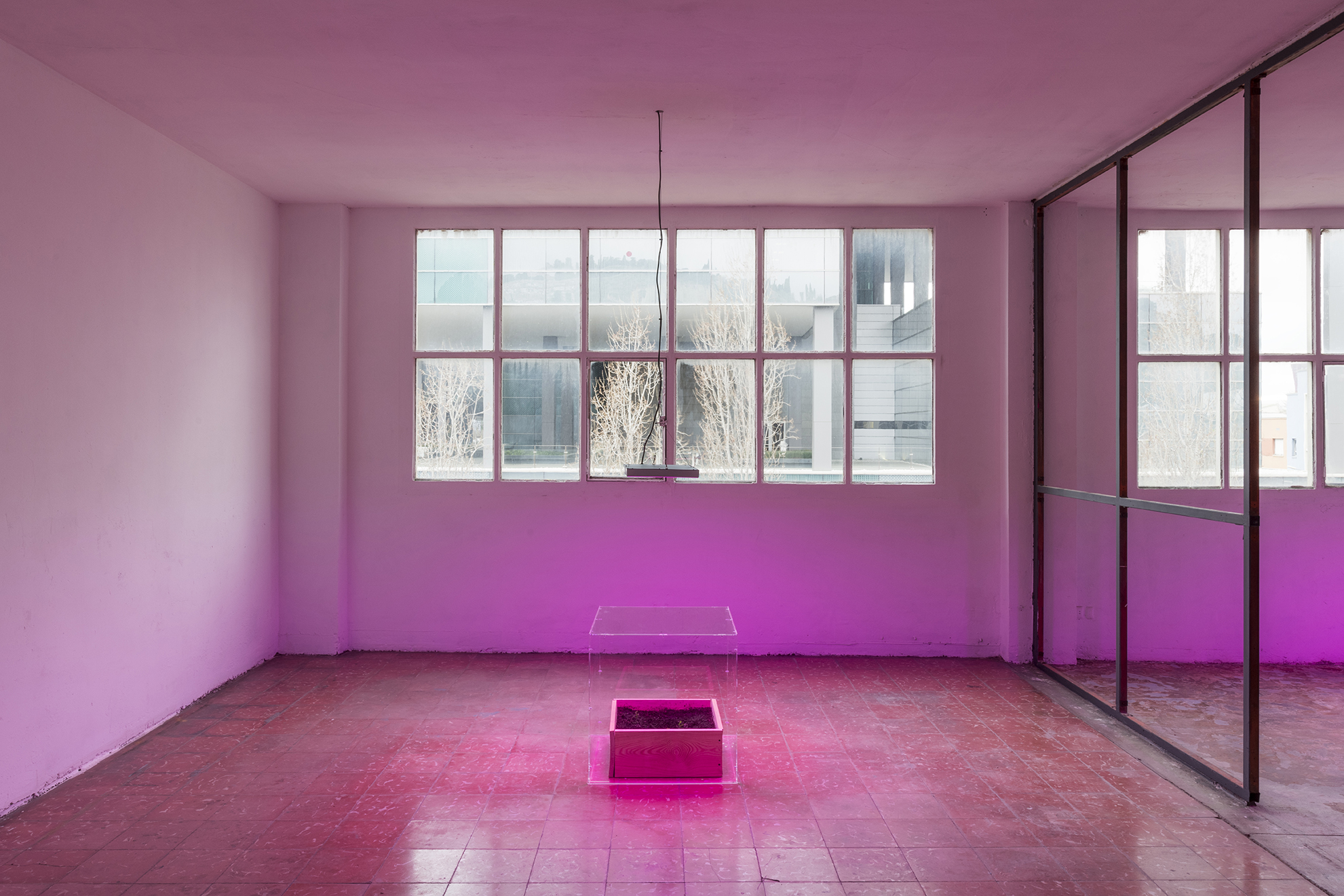 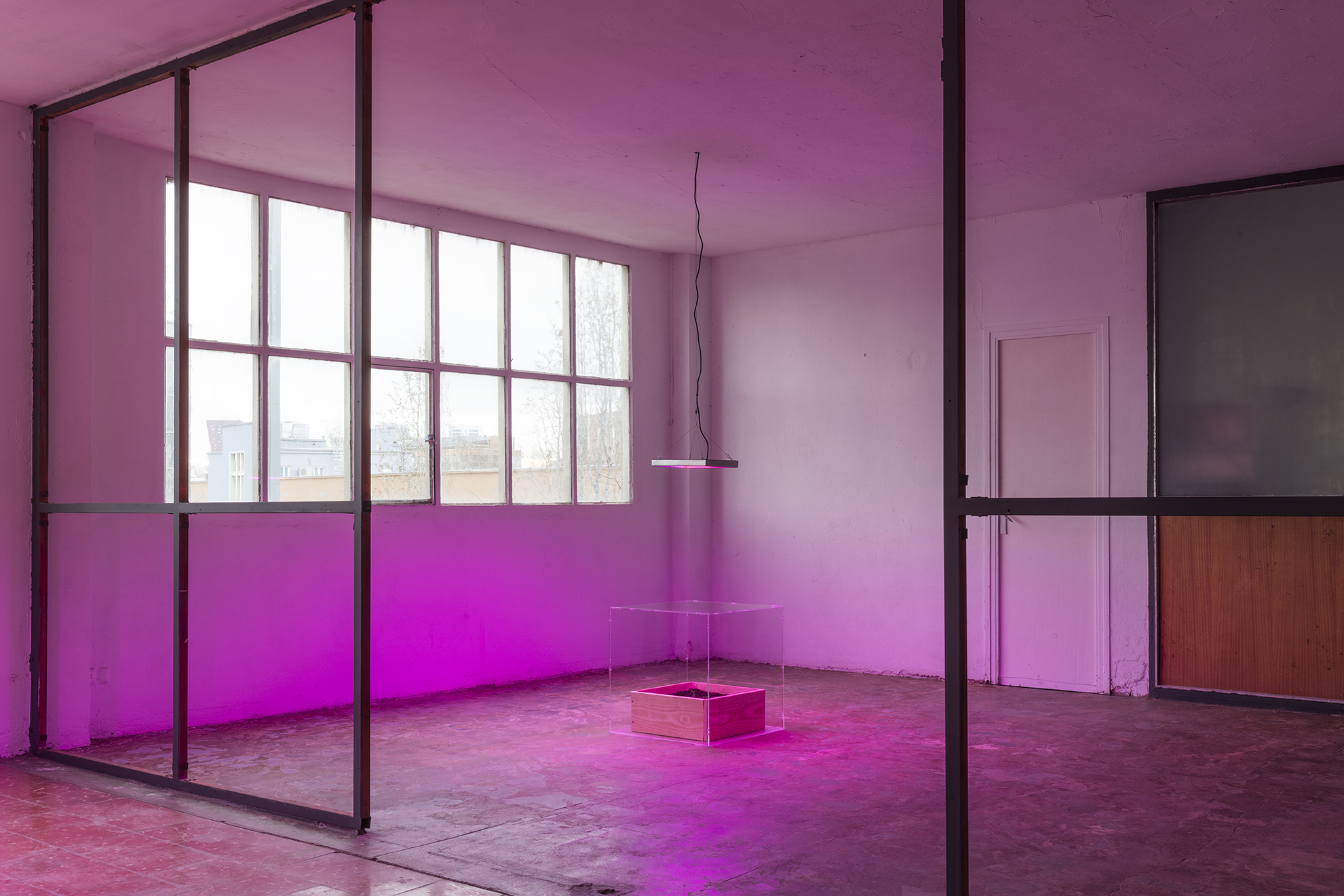 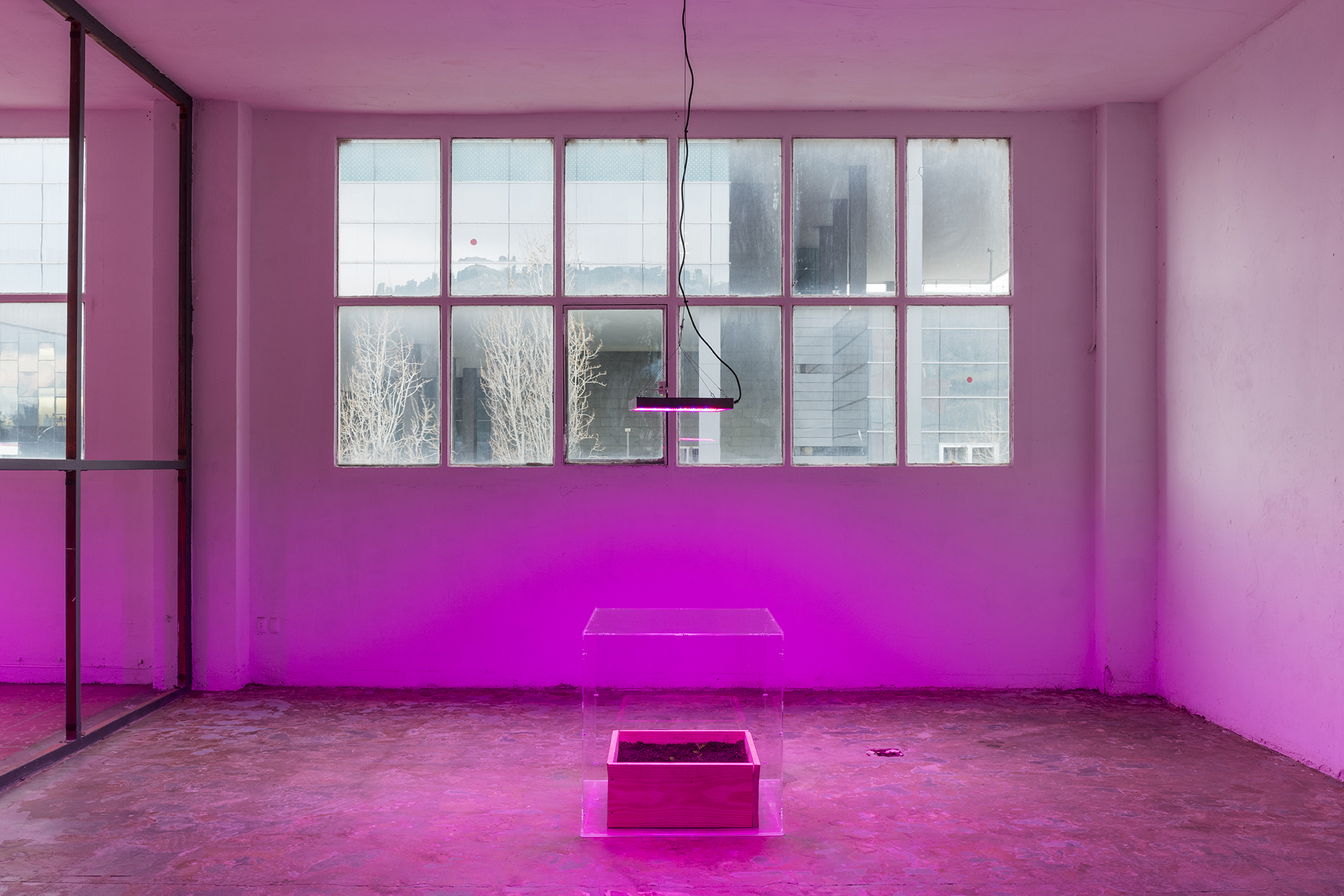 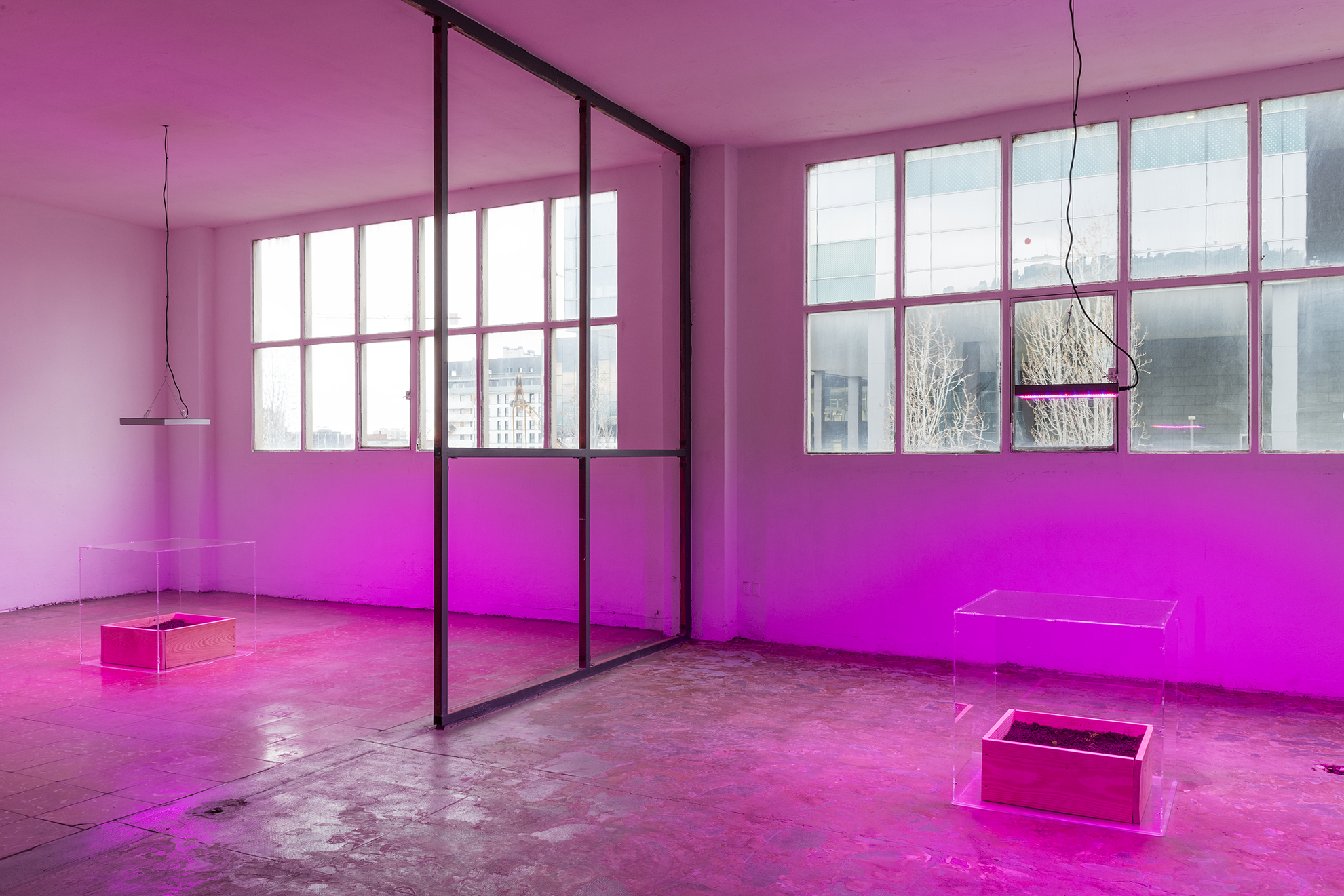 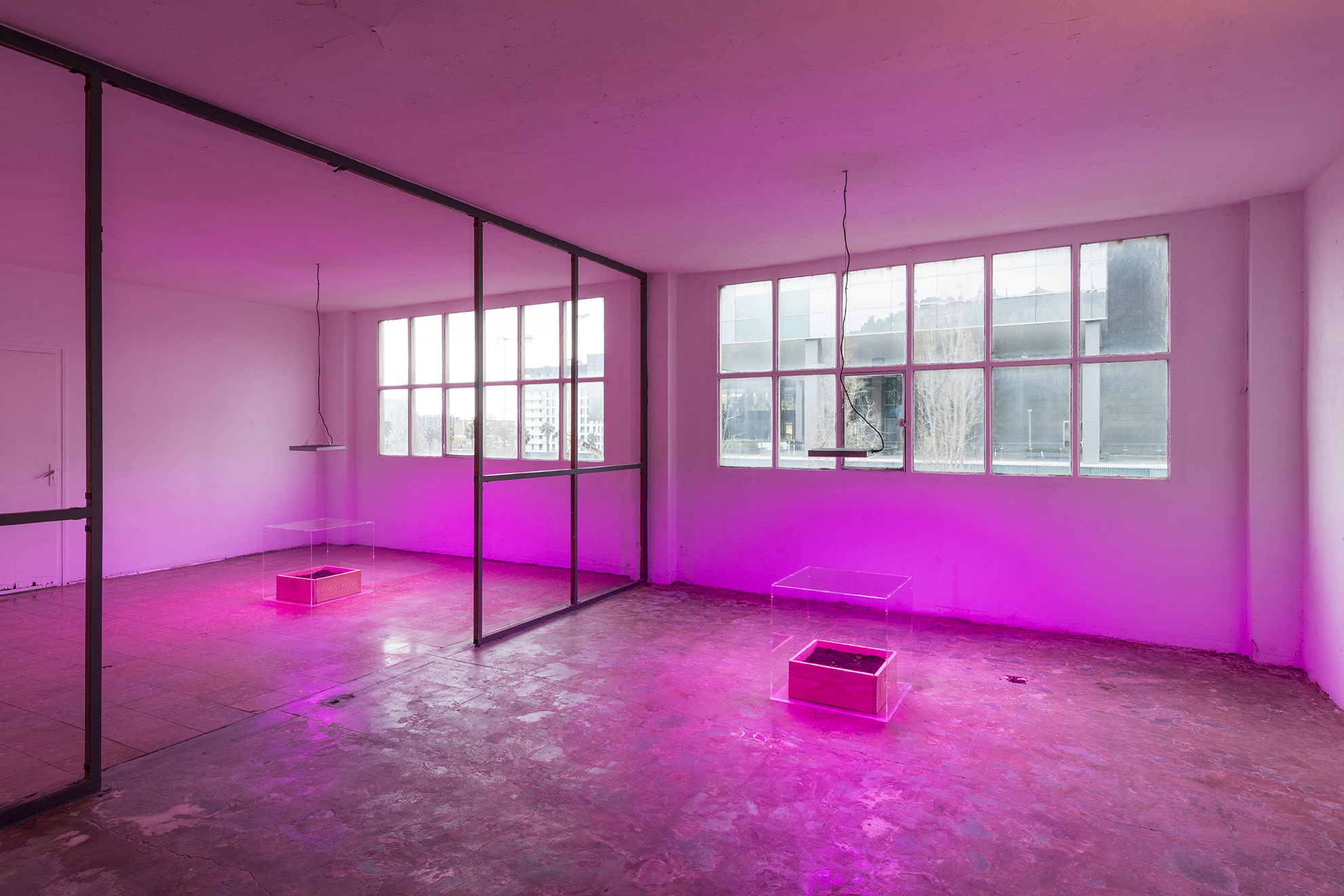 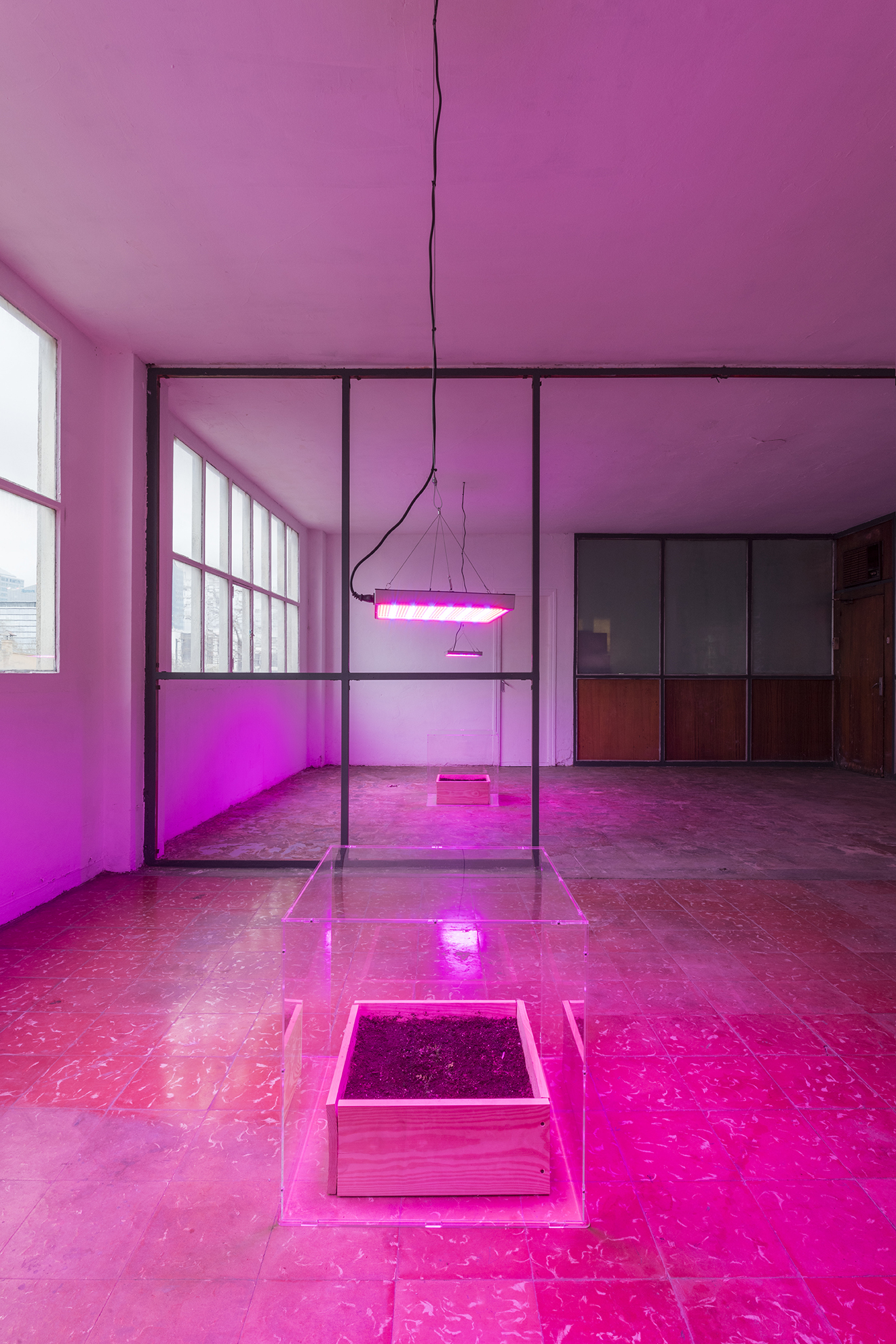 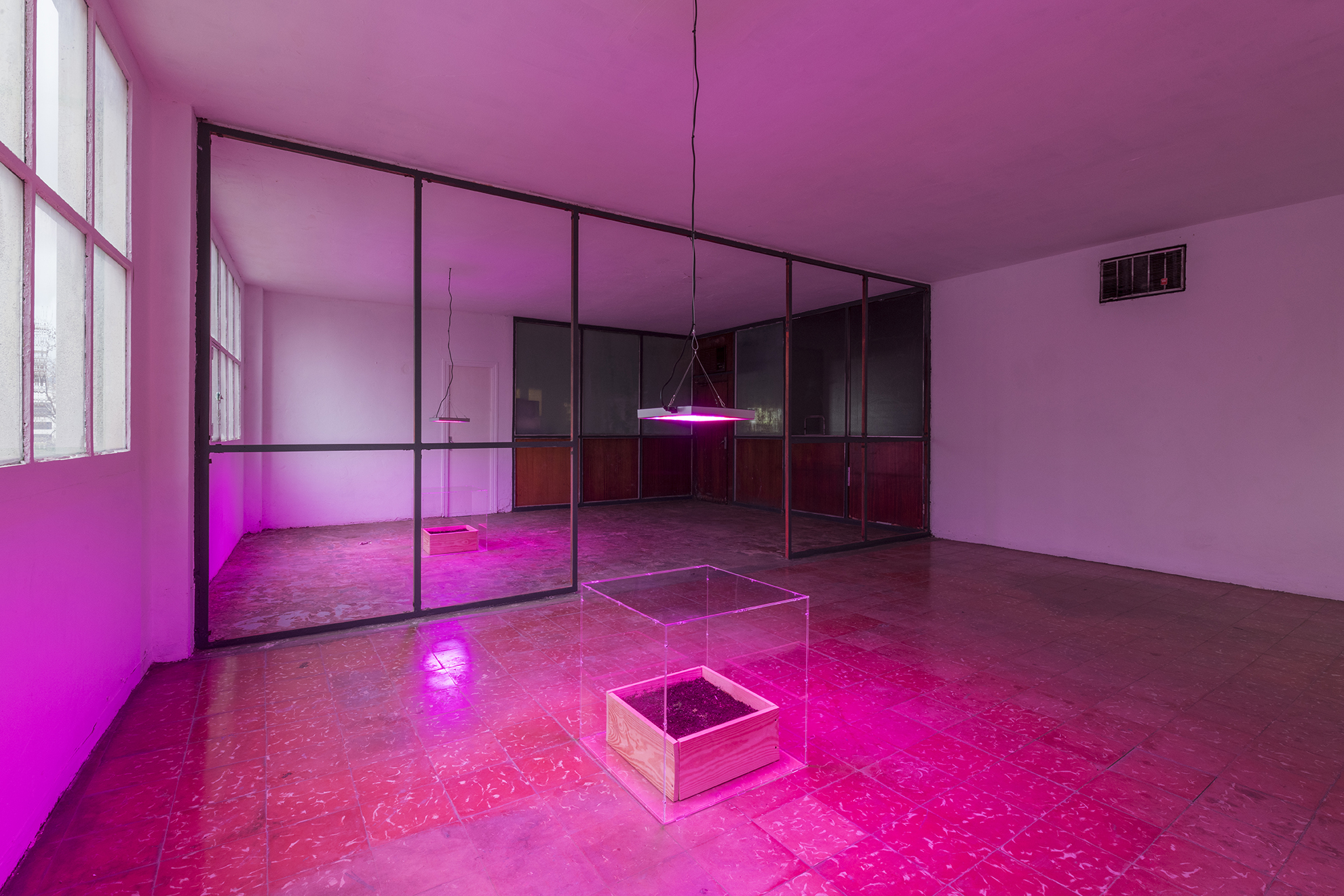 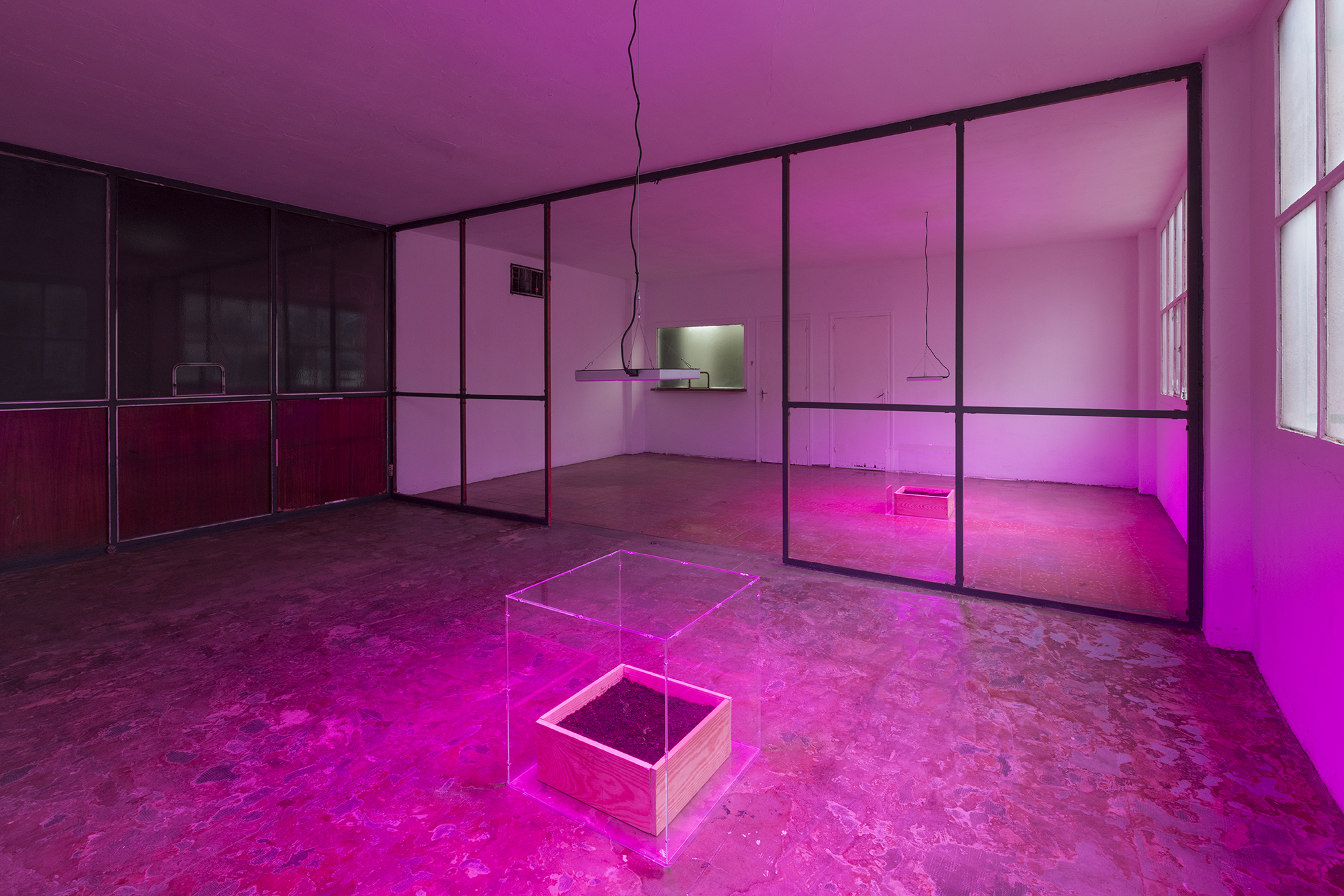 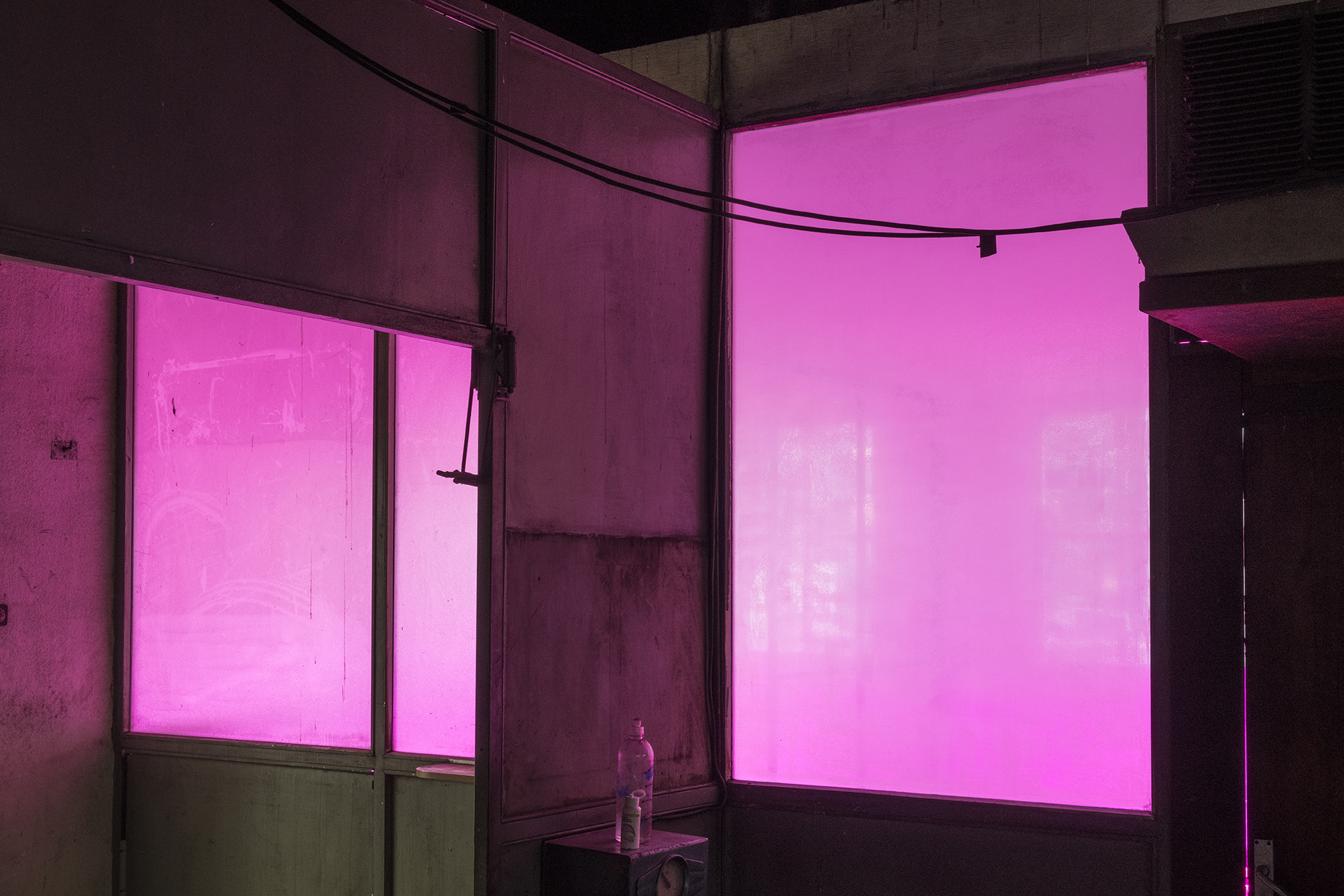 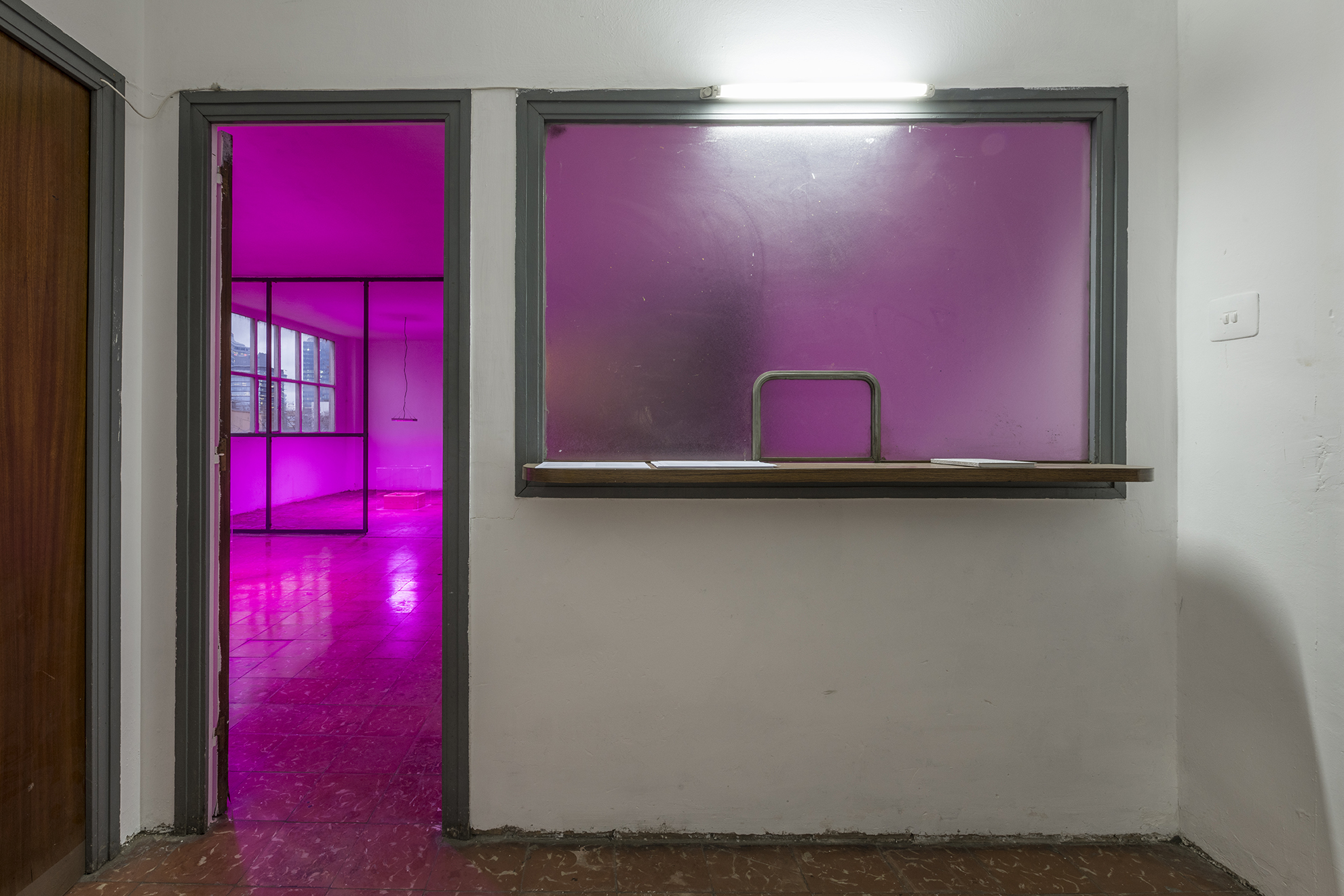 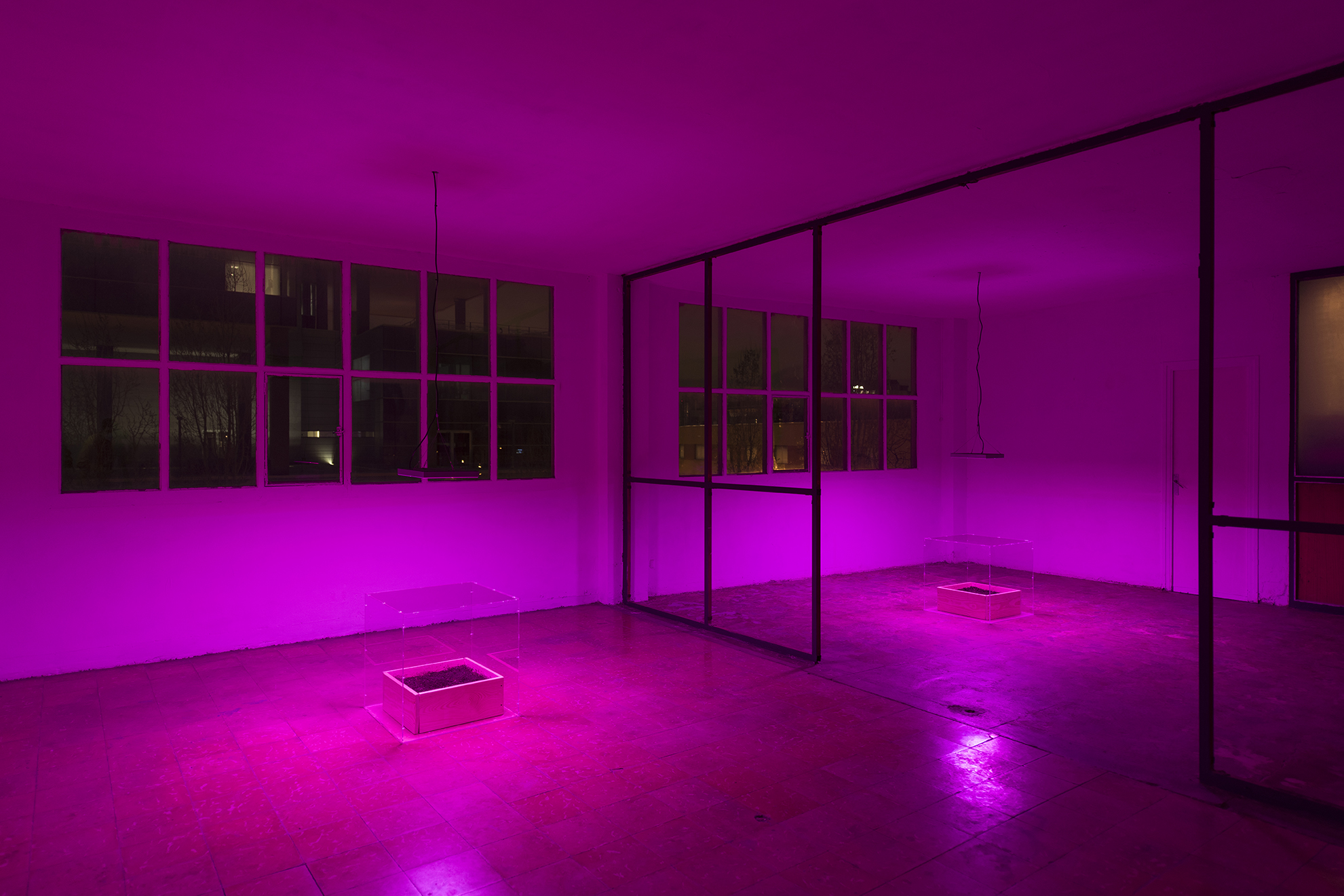 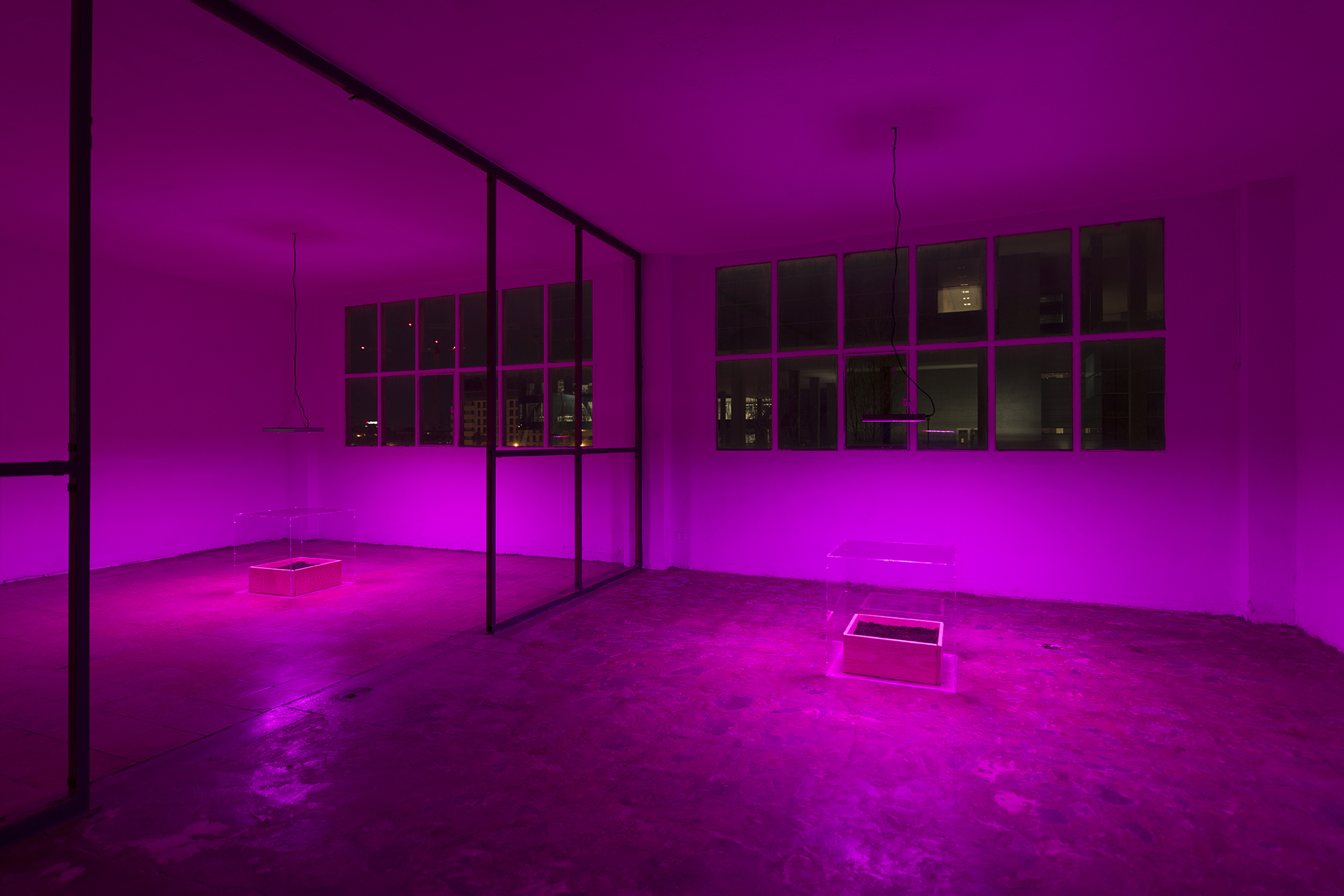 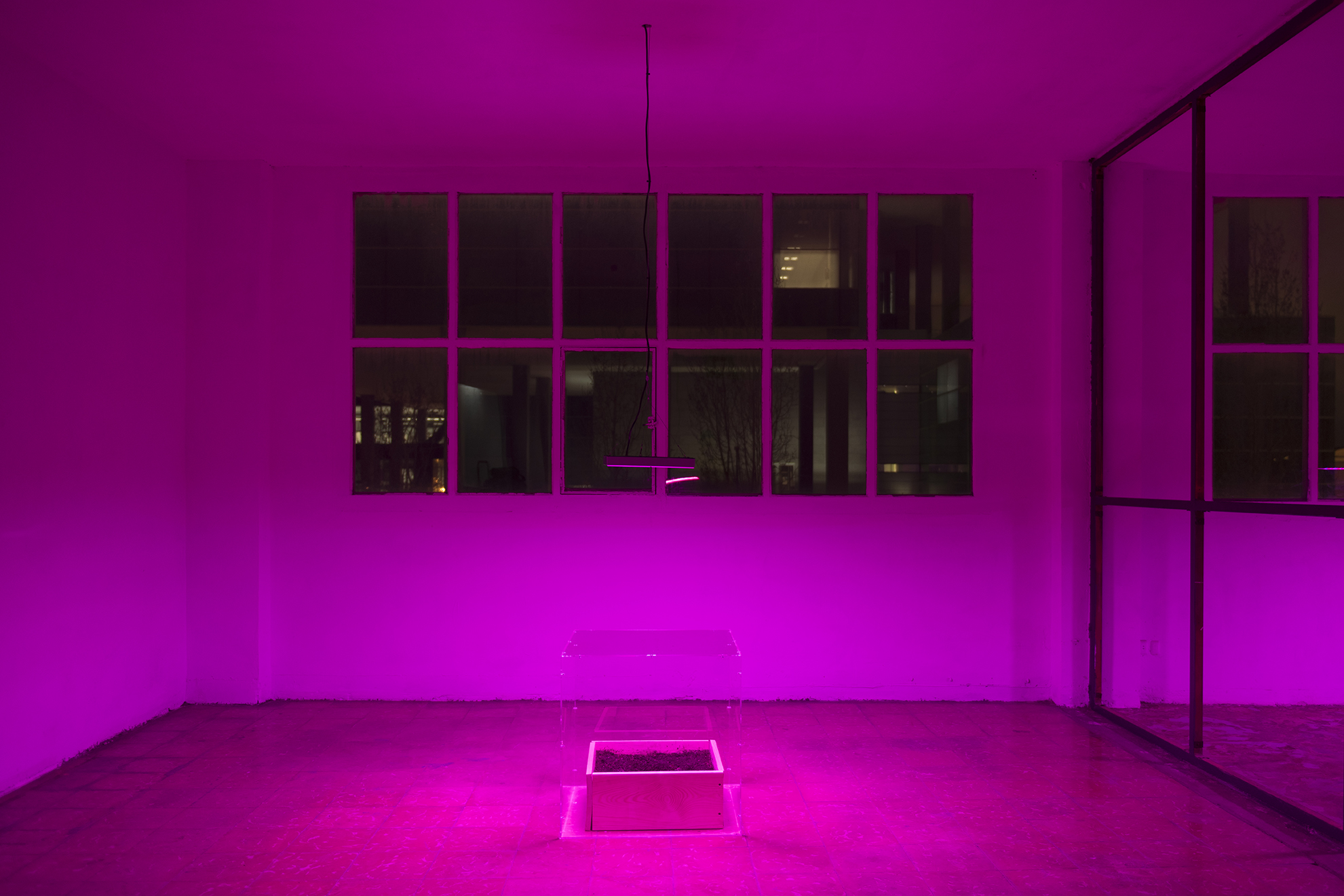 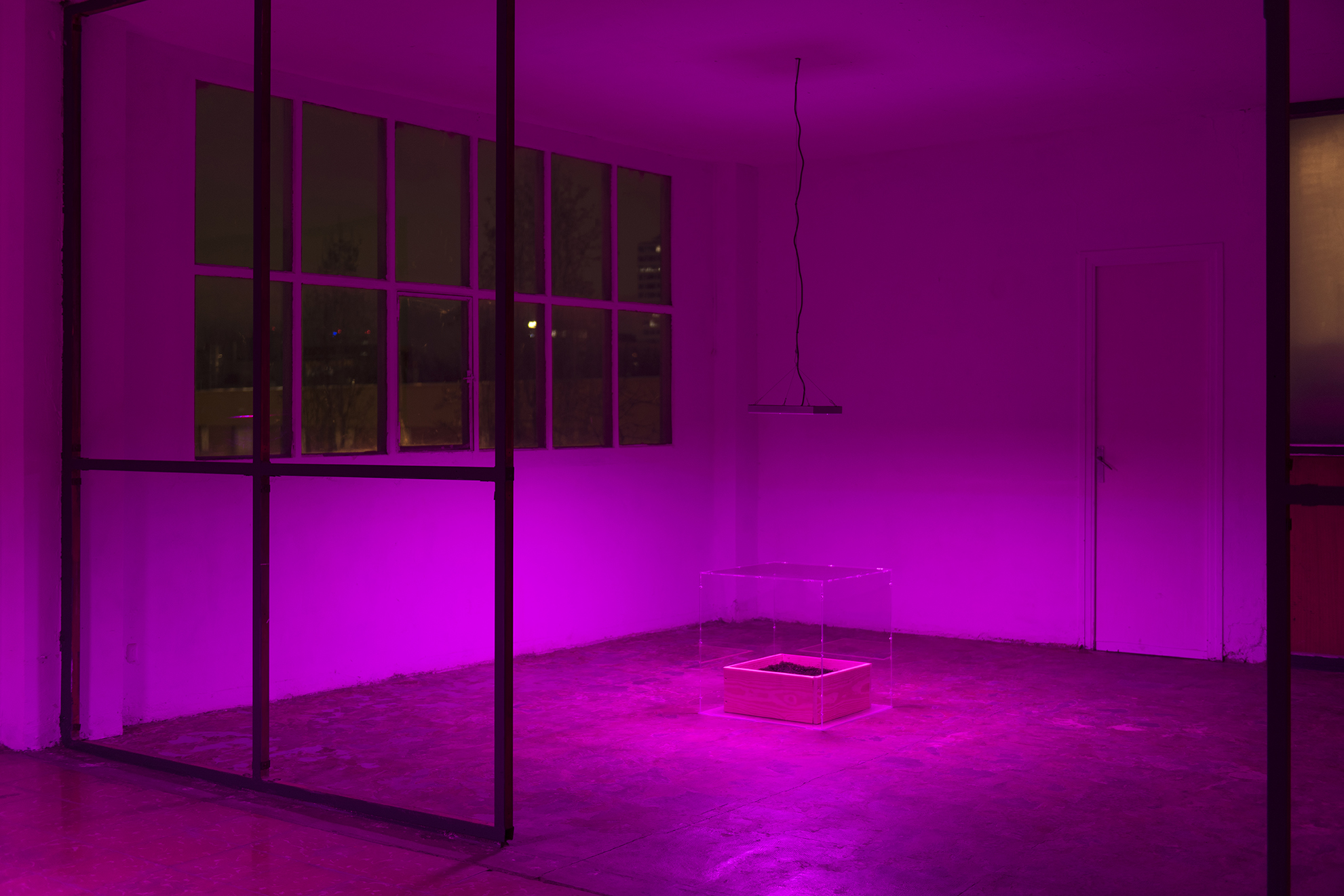 Photos by Roberto Ruiz
All images courtesy of the artist and gallery.

Kudzu is a parasitic plant species, native to Asia but invasive to North America and Europe. The plant was brought intentionally to North America in the late 1800s for its aesthetic qualities and agricultural dexterity. The leafy green vine blooms with sweet smelling purple flowers and was originally marketed as an ornamental way to shade porches and later was used industrially, as a cover plant preventing soil erosion, and as high-protein cattle fodder.

In the south eastern United States, the plant grew exceptionally well, due to the parallels in humidity and heat levels to its native climate. Since its original introduction into the region Kudzu has proliferated exponentially, creeping well beyond its intended purposes. Now it forms a quintessential part of the landscape and the folklore of the ‘American South’.

Kudzu essentially smothers all other plant life and rather than supporting itself, grows on top of other objects — plants, infrastructure, powerlines, building etc. — to reach light. It can grow at about 30 centimeters per day in direct sunlight. The plant is also stress-tolerant and survives adverse climates with very low nitrogen levels. The only way to kill it for good is to burn it.

For the installation in ‘Studio Parasite,’ one of artist’s many works centering the vine, Dean designed two seedbeds, into which Kudzu sproutlings were recently transplanted, grown from seeds leading up to the exhibition's opening. The wooden planters are encased in plexiglass cubes to prevent spore dispersion into the local ecosystem and positioned under grow lights, most commonly associated with the growth of marijuana. The plant will have a hyperconcentrated period of growth throughout the course of the exhibition timed for the start of spring with continuous access to light, natural through the windows and artificial from the lights.  The plants grow until the final week of the show, and are then burned; roots, soil planter and all. The ashes are placed back into the plexiglass cubes turned upright and shipped back to the artist to form a new series of sculptures.

The exhibition creates a parasitic system without a host — or if there is a host, it is the white cube. The system that the exhibition starts up models something similar to art, or a studio practice, cycling and recycling ideas and materials — but it models art as a structural parasite, necessarily territorializing everything around it to keep itself alive. Though here, the parasite is, again, physically without a host. On the other hand, Dean’s interest in Kudzu lies in its potential parallels to blackness, a return to her past inquiries around the ontology of blackness as a sort of viral force, a system of meaning capable of reproducing itself and its own meaning structures without any ontological core.

The Kudzu thing started as yet another joke in a way — or no, it was quite serious, when I was trying to write the play for the Hammer and thinking about the South. I was trying very hard to visualize an abandoned plantation and remembered my grandmother —

Actually no, I went to give a talk in Atlanta in August 2019, and I hadn’t been there in a number of years. I used to visit my Abuela there every summer with my younger brother. I did my talk and then spent a few nights in Decatur at her house. She drives but really shouldn’t anymore, so I spent much of the time shuttling her around in her little KIA–the bank, the supermarket, visiting my cousin at my Aunt’s house.

I’d forgotten that a huge part of our routine had always been her pointing out things that are weird about Atlanta. Being from New Jersey herself and having lived in New York City most of her adult life, Atlanta is a foreign territory and she likes to keep it that way. As we tooled around, she provided her running commentary on such topics as: the way they say “see-cement” when talking about cement, “in-shurns” for “insurance.” Visually: the red clay that sits under everything, and the Kudzu that barricades the forests from view and creeps over anything that it can attach itself to.

I made a whole show using red clay a few years ago, that became — in part — about how I’d made an assumption and actually in the South a lot of the soil is a regular brown. The red clay is pretty spottily distributed throughout the region. Culturally, though, there’s all this stuff about “the red clay.” I like these things; the unreality of American cultural identity and geographic imaginaries. Kudzu is another beloved trope of the American South. Flannery O’Connor, Toni Morrison, all these writers who take on the South — you find them talking about “kudzu curling up the rotting shingles…” “the shadowy form of the kudzu vines choking out the trees…”

You also see it in apocalyptic imagery. Because, if left to its own devices, Kudzu will simply overtake everything, is the idea. Kudzu — rampant, aggressive, unstoppable. And when it does, it slips over things, taking on their form. Sort of a botanical changeling, virus, slime, one of those parasites that commandeers its host, its only goal to continue to propagate itself. Maybe this is a bad analogy, maybe it's actually just more like a leafy crust.

The funny thing is that the scientific community is embroiled in an ongoing debate about whether Kudzu is actually so powerful. All this lore about choking out ecosystems — which has led to the plant being a highly controlled substance in most countries — is undermined by the fact that often Kudzu only seems to grow at an alarming rate in direct sunlight. Once you enter a forest, it quickly fades. A threat, but an empty one.

Months after that trip, I tried to get a few people I know in Atlanta to send me cuttings. They were all spooked by the request. I am generally not a pushy personality, so I didn’t argue that the department of agriculture probably wasn’t too worried about us. I also asked my cousins and they were kind of like I don’t know what you’re talking about. I eventually found some seeds on eBay and had to order them from Russia using a VPN.

The idea, then, was to plant a bunch of seeds in a variety of locations. Whatever exhibition offers came, I’d suggest roping the show into this network of sleeper cells, where we’d grow this plant, do a show vacated of all content. Simply process, and whatever desired meaning could be projected onto it by the institution and the viewer. I had my thoughts about blackness — the ecological threat stuff was not that interesting to me in this respect, more the image of threat (the threat imaginary?) It was mostly the fact that something could easily overtake everything in its path, doing nothing to change other objects’ cellular, molecular make up in the process, but still tangling everything up in itself. A virus, a slime, a parasite that commandeers its host. I realize now this is a bad analogy, yes, because blackness does rework the internal composition of things it touches in a way. If we’re talking about the right blackness (blackness not Blackness?) Kudzu’s life is as an aesthetic object, its being a structural one. Blackness’ life, sadly, is most often as an aesthetic object, but its being: a structural one. Yes, that’s it.

As such, in my little cells, the plant would grow and offer nothing but its growth, and in order to do anything other than be would need to be propped up by whatever mental structures you placed in its way.

Some other stuff happened, time passed. I wanted to make all these sleeper cells. Grow it. Burn it. Turn it into actual objects by mingling it with other materials (we’ll see how that goes when and if it ever goes). Almost got one set up in Pasadena at the Huntington (for whatever reason they were nearly willing to risk a small, but potent ecological disaster on their grounds. For the love of the game!) Almost one in Switzerland. Thought about repatriating the project to East Asia. I accidentally left one of my VPN seeds in a park in the West Village, in a shallow hole that I dug. My studio assistant Sam and I started to set some up here in New York with the helpful advice of Marisa at Pioneerworks. Sam took some of my VPN seeds home and tried with those to no avail. Then, using an app, he found a field of Kudzu in Bushwick; it had taken over a baseball field down the block from his house. He also went to an abandoned railroad track in Midwood in the dead of night to get some cuttings. None of them took, and they all died in our respective apartments within days as winter approached.

Cory is the only one who has had any luck. I tried the process he used, germinating the seeds and shoving sunlight down their throats, but nothing happened. I suppose the seeds like Barcelona and Cory.

The whole thing started with this idea of wanting to model an artistic practice. Not just cynically skewering art in the 21st century’s inability to make a case for its own existence (parasitic on the back of politics, history, identity, biography, and so on), but paralleling the process of pollination, shifting ideas and materials across forms and mediums. We were going to — we will? — take half of the ashes from the Barcelona batch and make new composite planters for a new batch to grow somewhere else, and the other half will be incorporated into raw material for “artworks.” These artworks would/will model some abject excess, accursed share, surplus value — I’m just saying words now. Really maybe just mean deadened capital. Dead plants. Dead capital. Once lively organic forces, now embalmed in materials and forms.

There’s that Robert Morris piece, box with a sound of its own making. It’s a perfectly closed loop, in my opinion. The box is the piece is the making of the piece, the box. A perfectly self-referential, material loop, with an actual sonic loop enclosed. I guess Studio Parasite (at one point titled Bad Infinity, a sloppy reference to Hegel that I’m still working through) is my attempt at looping myself through this proxy object, the kudzu, with the knowledge that I can never be hermetically sealed. More importantly, with the knowledge that that cannot be the goal. In retrospect, the whole project was a big excuse to get across the gulf between previously seemingly analytical, minimalist works and back to expression —  though always shooting with a Minimalist historical and conceptual lens. Maybe Studio Parasite doesn’t quite need to exist any more; in some ways sitting alone at home for close to a year performed the same operation, punting me back into play, and accidentally restoring the boundary between Art and art. But the great thing about Art and art is that it never needs to exist, but it does need to be a certain way (that only you (I) can know).

There is a lot more to say, but that’s always the case.