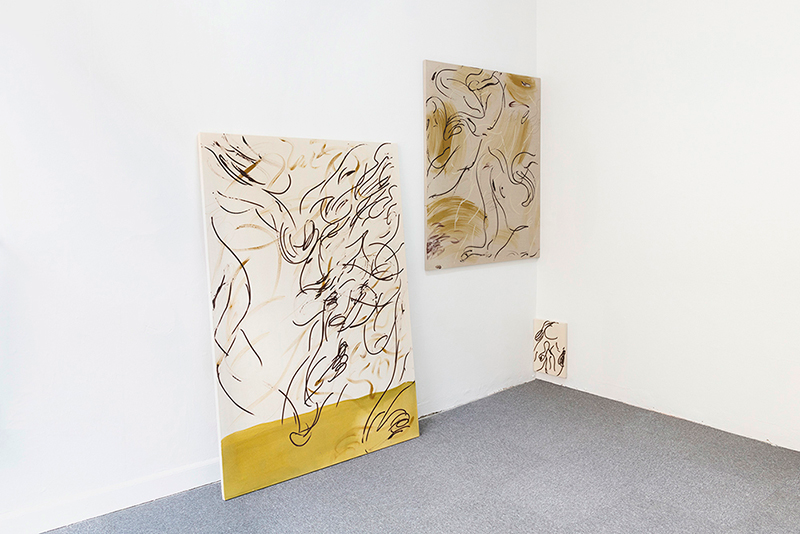 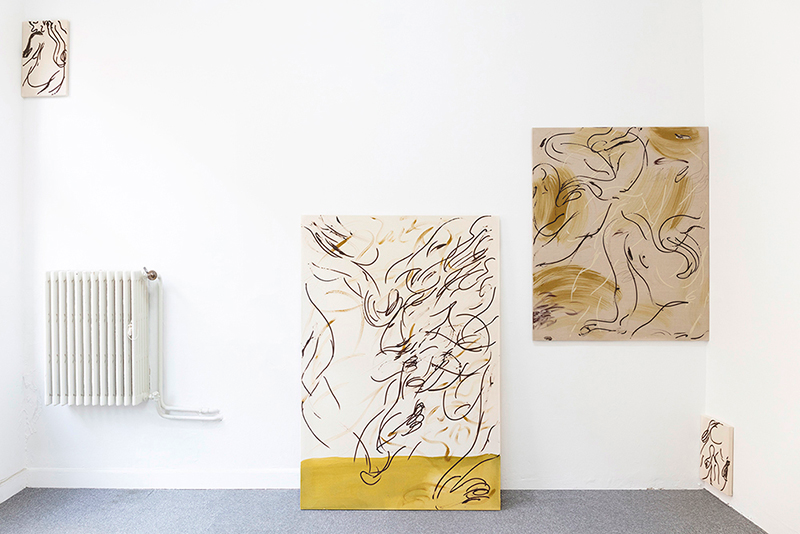 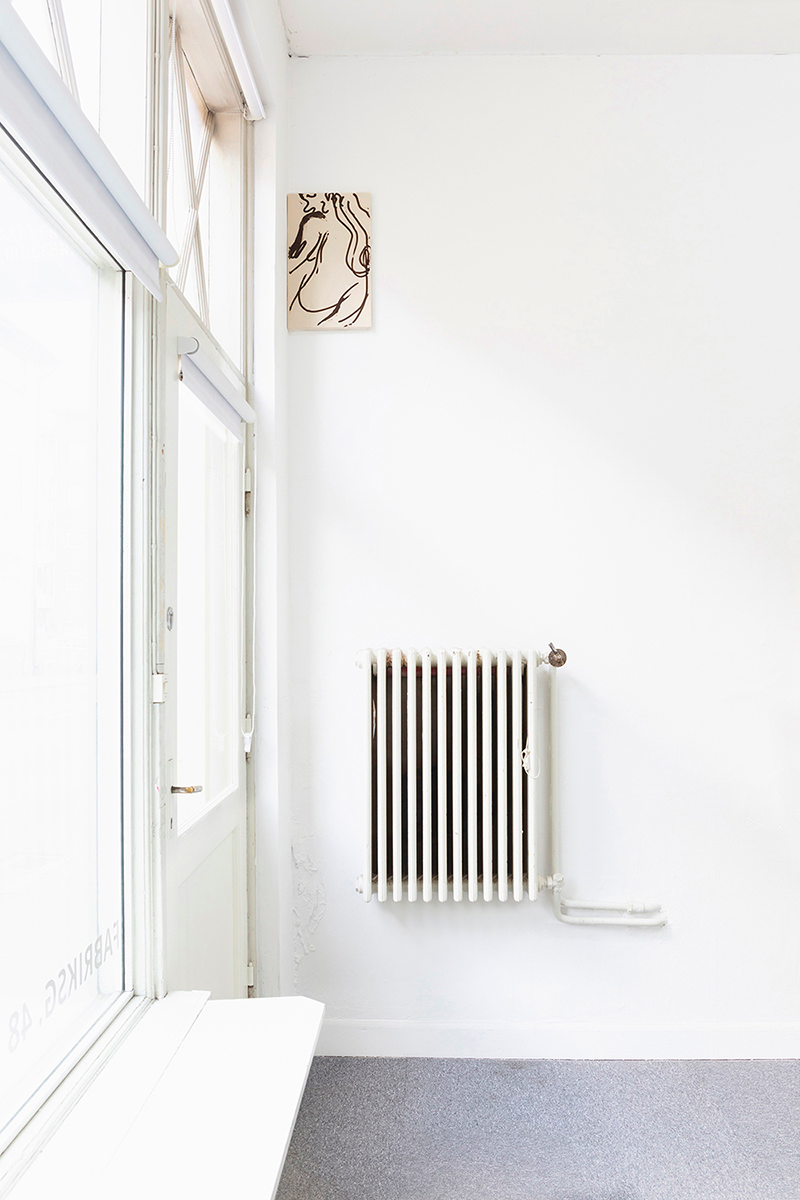 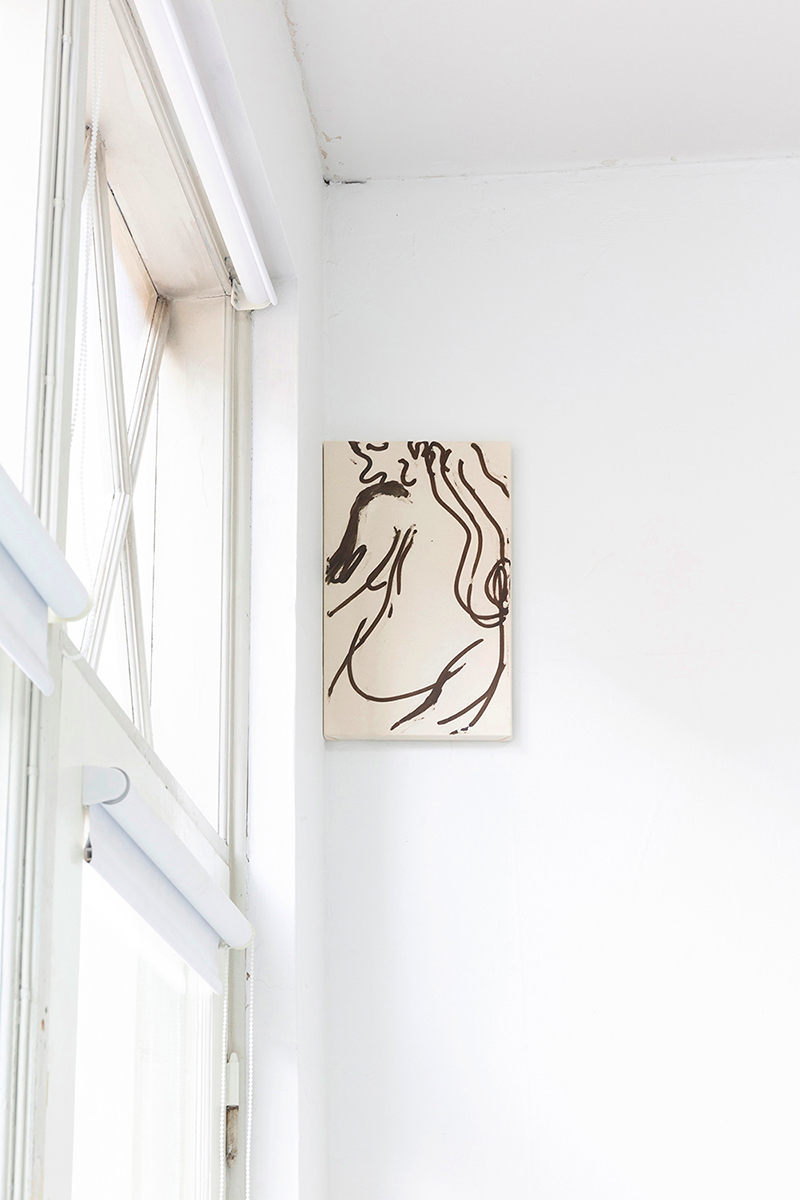 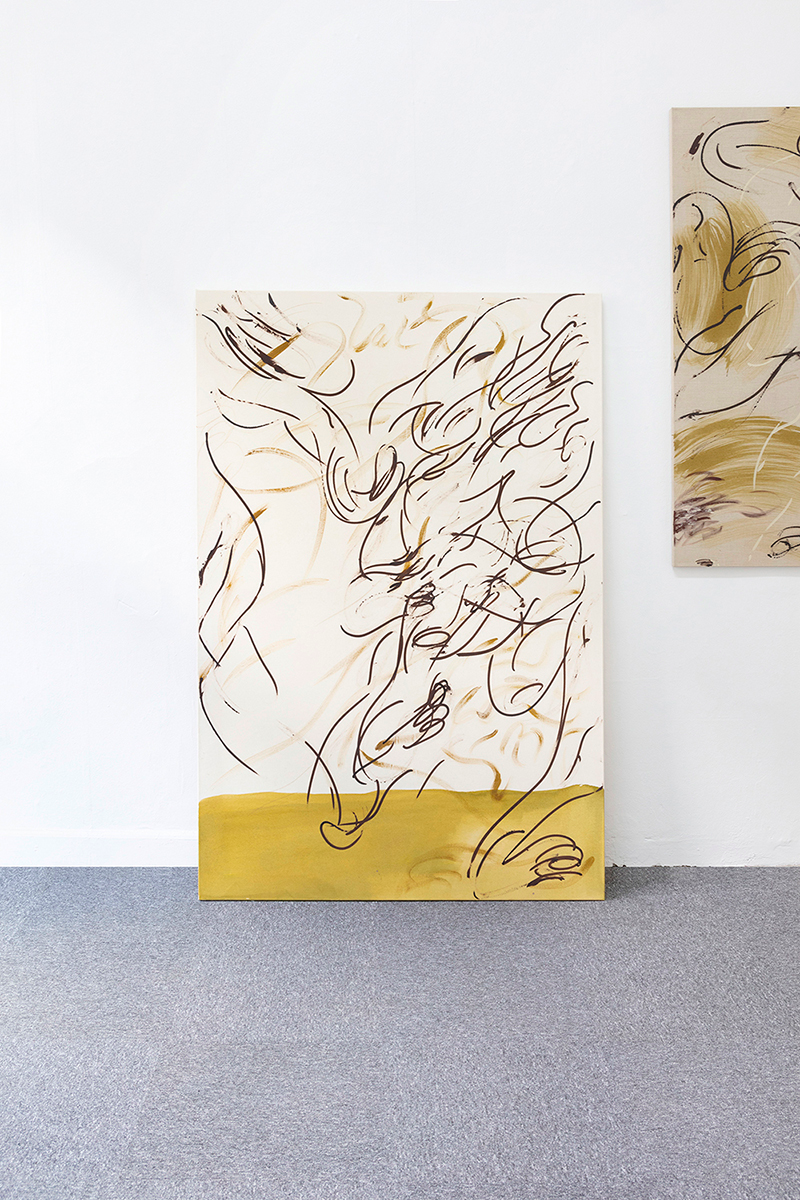 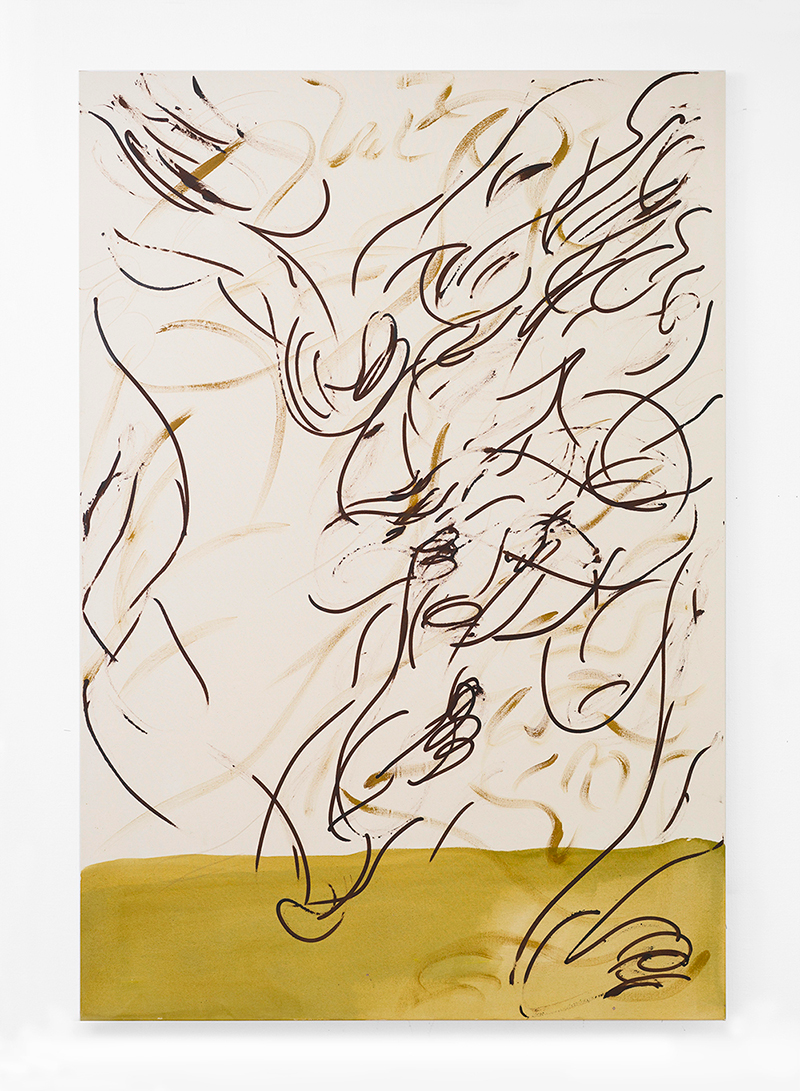 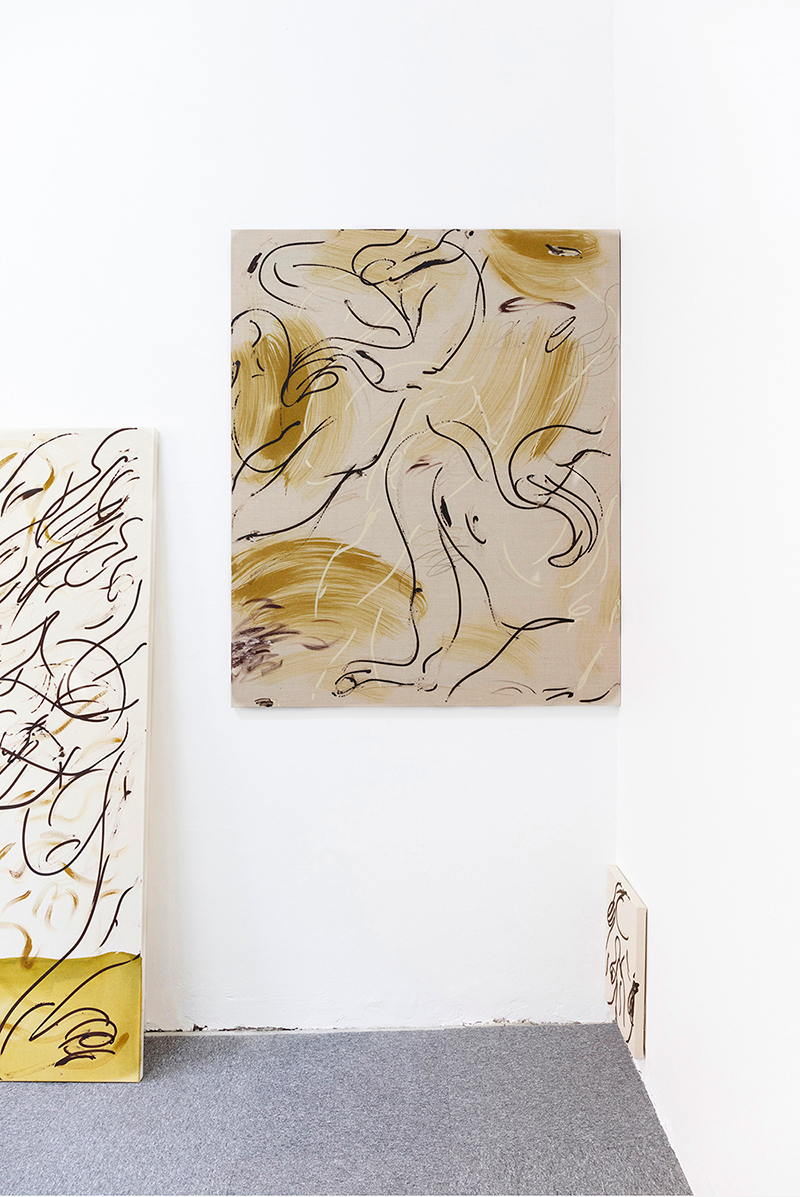 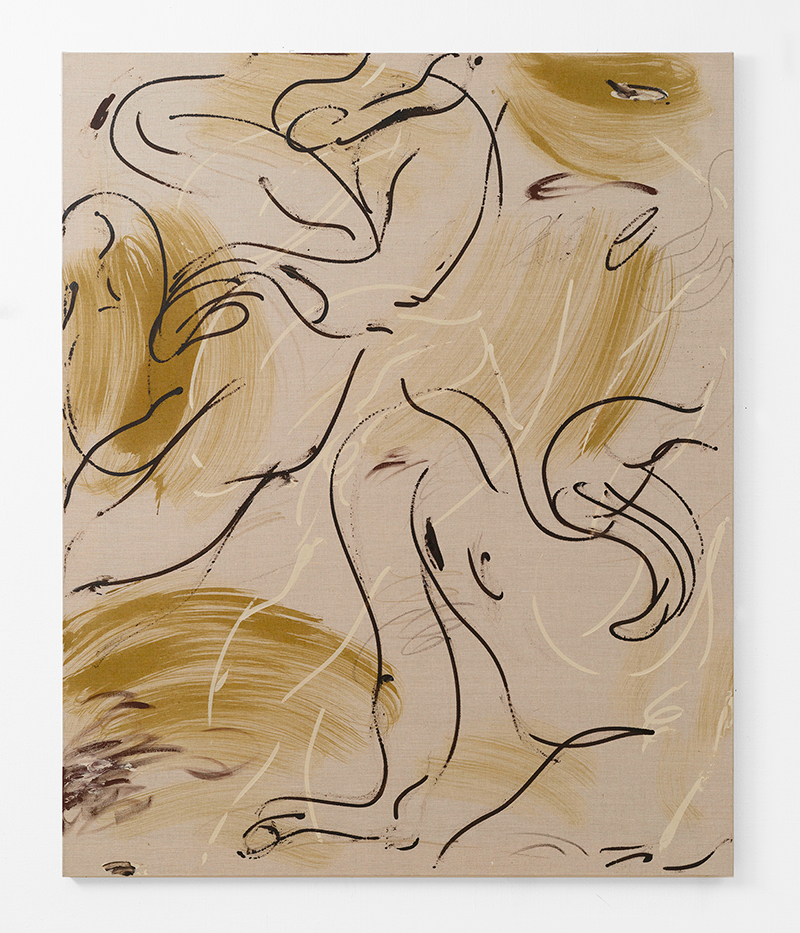 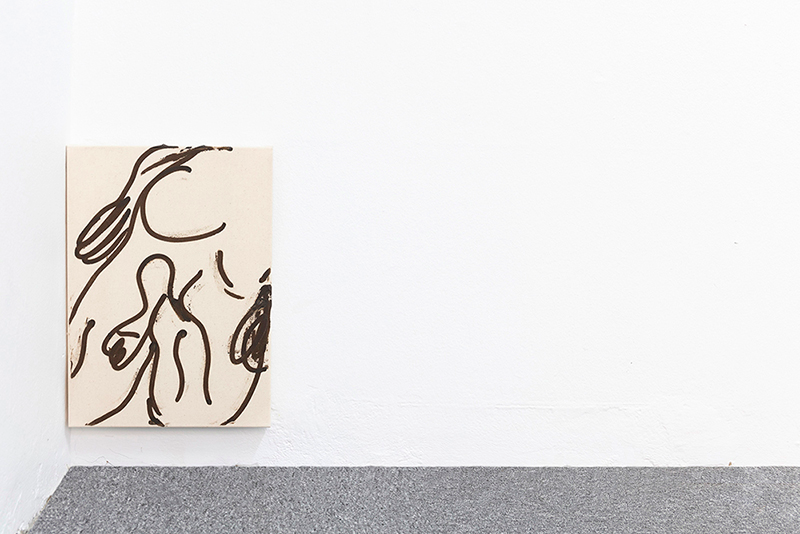 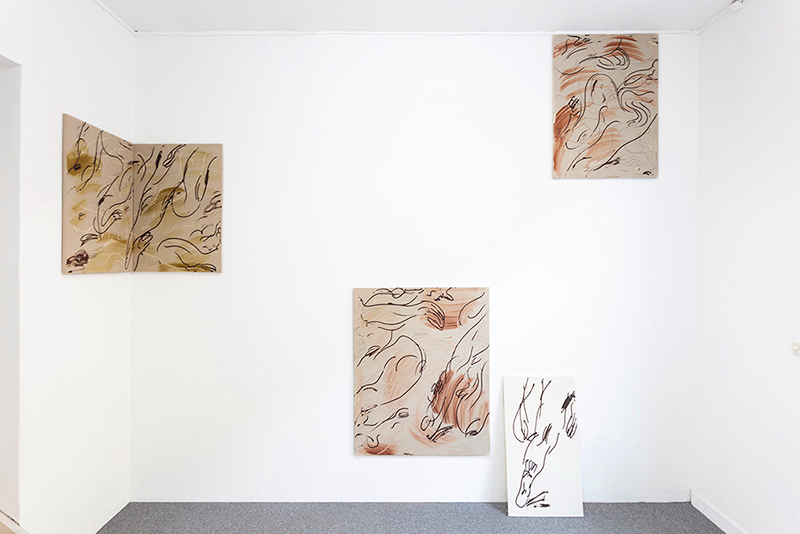 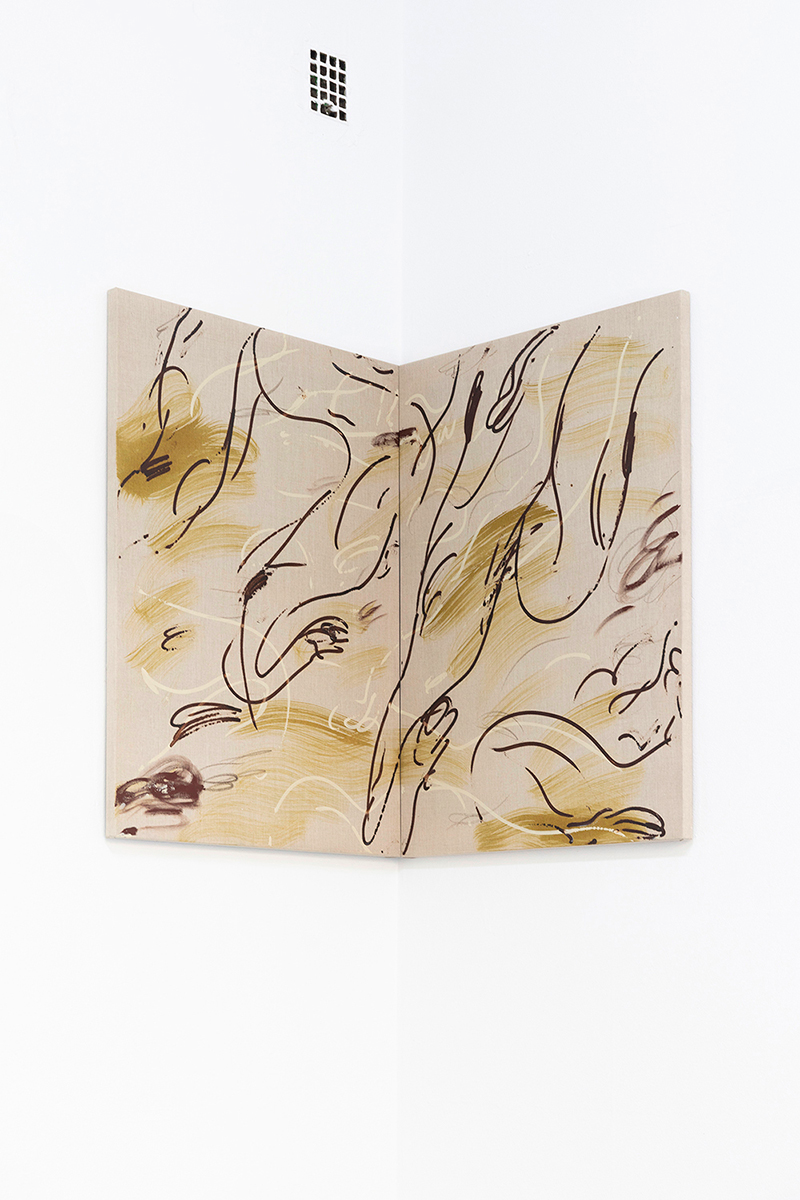 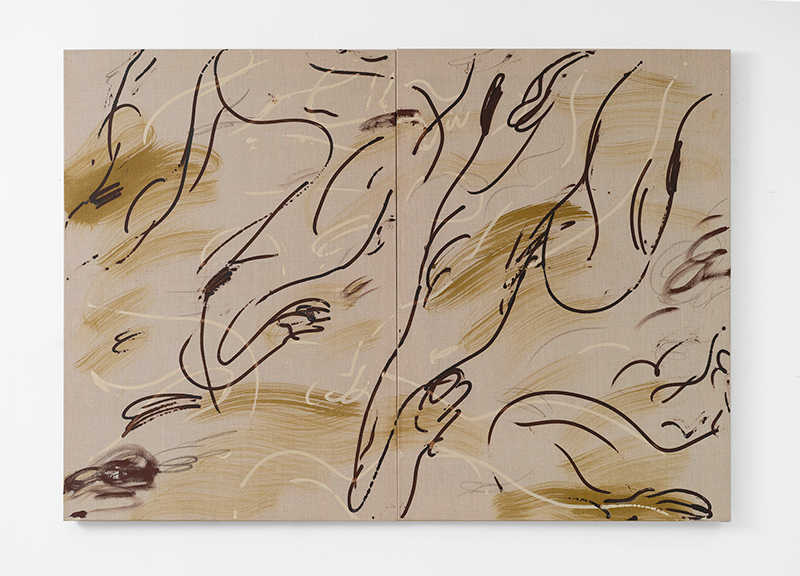 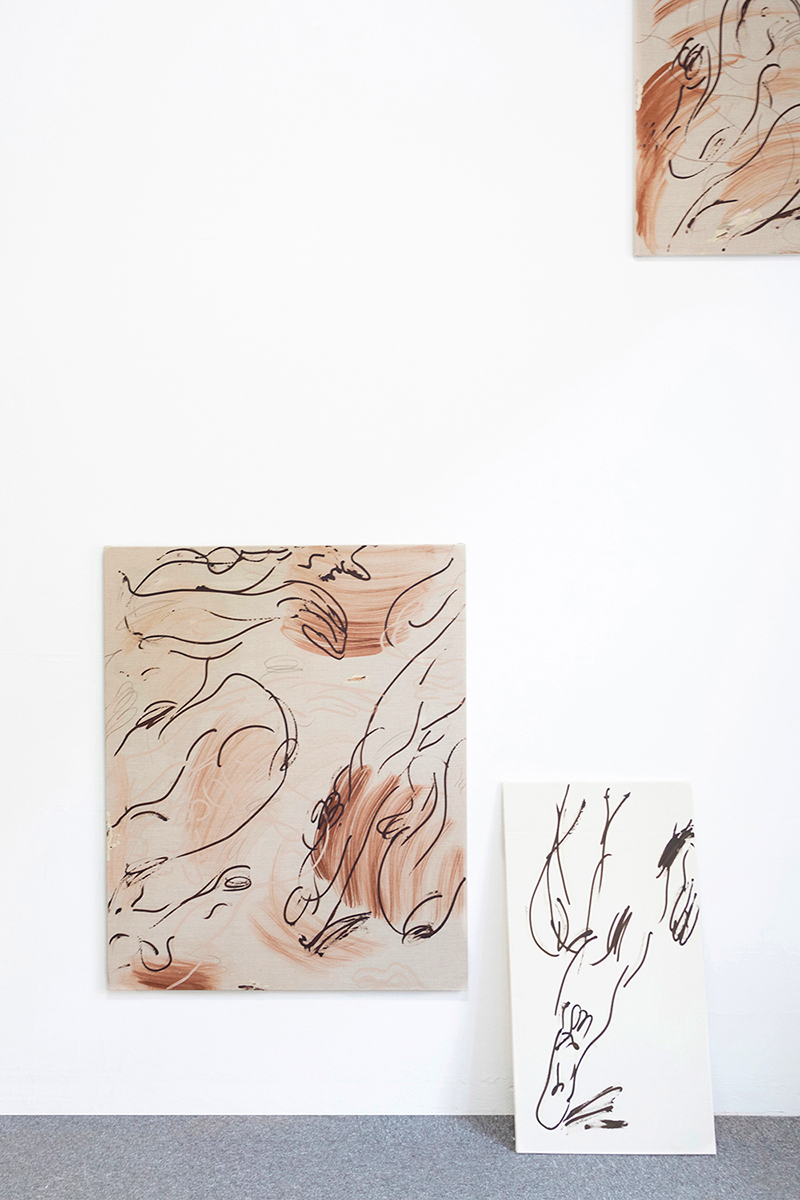 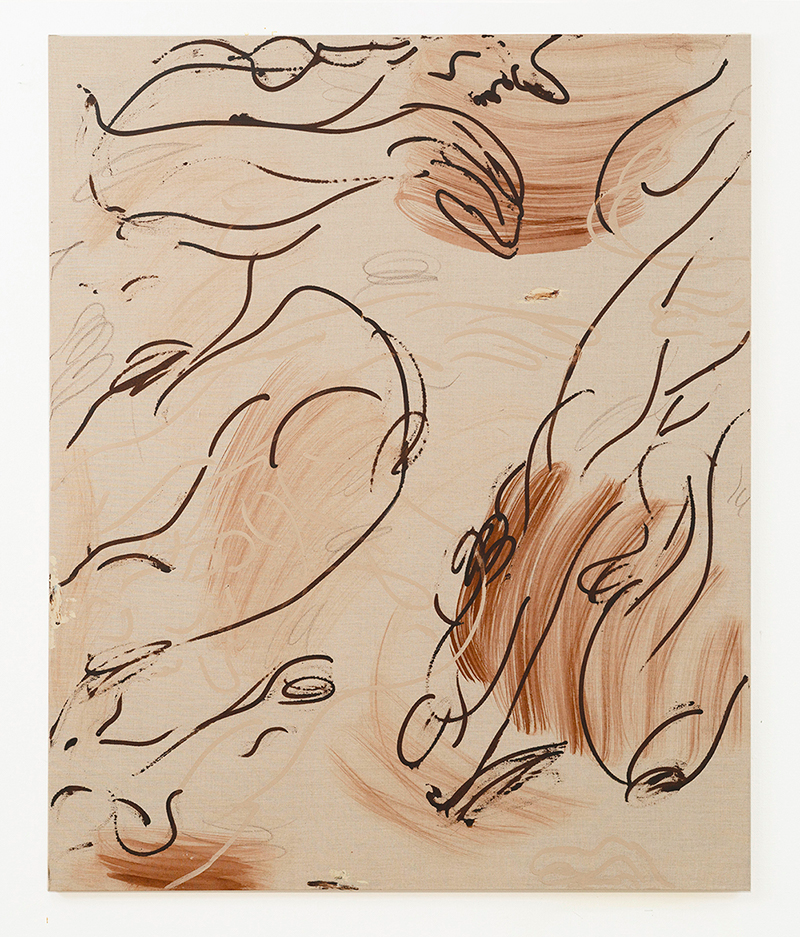 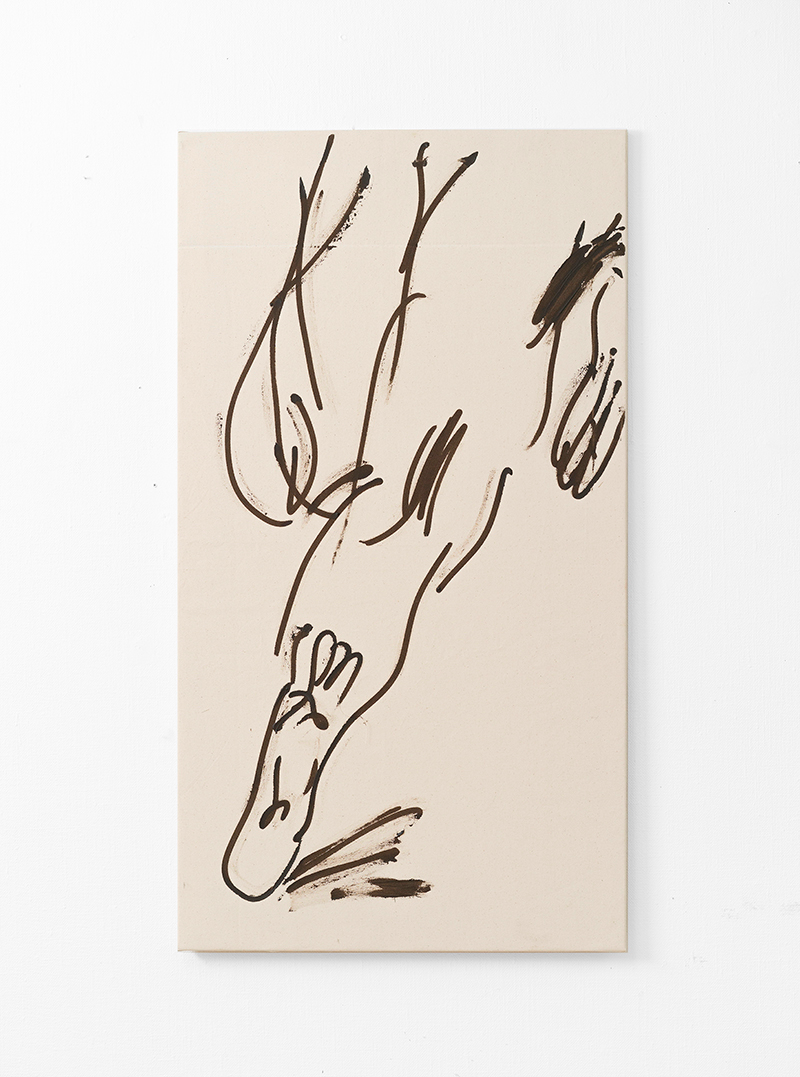 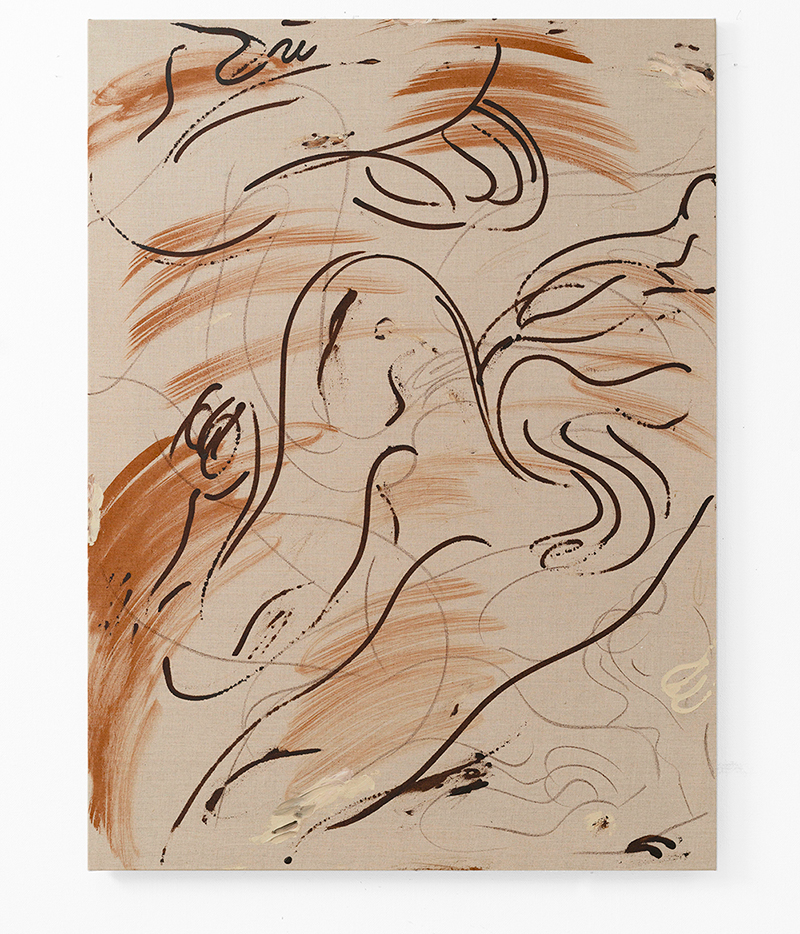 All pictures courtesy by the gallery and the artist.

"There is no way out. Escape is impossible. The only way out is in” I tell myself every time I try to escape something. When I look at Alina Vergnano's drawings that revolve around escape - the possible, as well as the impossible one - I come to think of this double movement of "inner" and "outer" escape which is made possible by art its best moments. Her drawings of gigantic, broken-up fleeing bodies are like visual transcriptions of the automatic writings of the surrealists, who attempted to escape everyday life by letting the unconscious control their actions.

Alina Vergnano's art has always operated on the borderland between the figurative and the abstract. Her lust-filled bodies that run, rest, sleep, or love and that move over the surface like waves, or spasms, freed from all conceivable narrative, can at times look like broken archaic writing, at times like a dream that resides at the surface of things. "There is nothing deeper than the surface”, Paul Valery once said. So it is here. My associations go to Matisse's cut-out figures, Kandinsky's symphonic formations, to Disney's movement patterns, but also to Cobra's dirty but, oh, so vivid color palettes. Her images also make me think of the violent body movements in the Pergamon Altar in Berlin, "the throne of Satan," as Paul so dramatically called it. But in Vergnano's images, the body lines are put out of play, like movements of light on the water surface, or jazz variations, which repeat themselves and at the same time break out of the thin of matter.

Vergnano herself finds inspiration in artists such as Louise Bourgeois and Amy Sillman, in Bergson's theories about the fluidity of things, or in authors such as Siri Hustvedt, Susanne Howe, and Silvia Plath. She was recently completely taken by Ottessa Moshfeghs My Year of Rest and Relaxation, which tells the story of a woman's hibernation for a whole year, a project in which passivity is transformed into an artistic project, which both accepts and transcends the boundaries of the body. The impossible escape of the self from oneself became a thread that Vergnano spins further in this exhibition, which is also about the will to escape the body or consciousness, about both belonging and non-belonging to a place, about being trapped in a contradictory inner movement or desire which is constantly subject to the laws of change. All things dissolve, Goethe claimed, long before Marx. He would have had liked Vergnano’s fleeting images. These drawings can also be seen as illustrations of emotions, this intangible matter that determines our lives and yet is so difficult to touch or understand.

In Time and Free Will, Henri Bergson wrote that feelings of joy make us open up to the future. Grief, on the other hand, comes from our inability to accept movement or overcome our physical and mental passivity. Vergnano's images are, out of Bergson's affect theory, as mirrors made for the future. They reflect a desire in motion, which refuses to be defined because then it would die. The volatility of desire hinge on the unsatisfiable nature of man. In Goethe's Faust drama, Faust is aware that the day he will be satisfied with the life he has and will ask time to stop will also coincide with his death. That is why he continues to demand the impossible. Restlessness is the engine of life. Vergnano's pictures are as parts of a single, large, restless desire machine that constantly wants to move on. Against what? Who knows. The important thing is not the destination, but the way there. However, once we have found what we are looking for, there is a good chance that we will want to change it. As Siri Hustvedt herself says: “Distortion is part of desire. We always change the things we want ”.