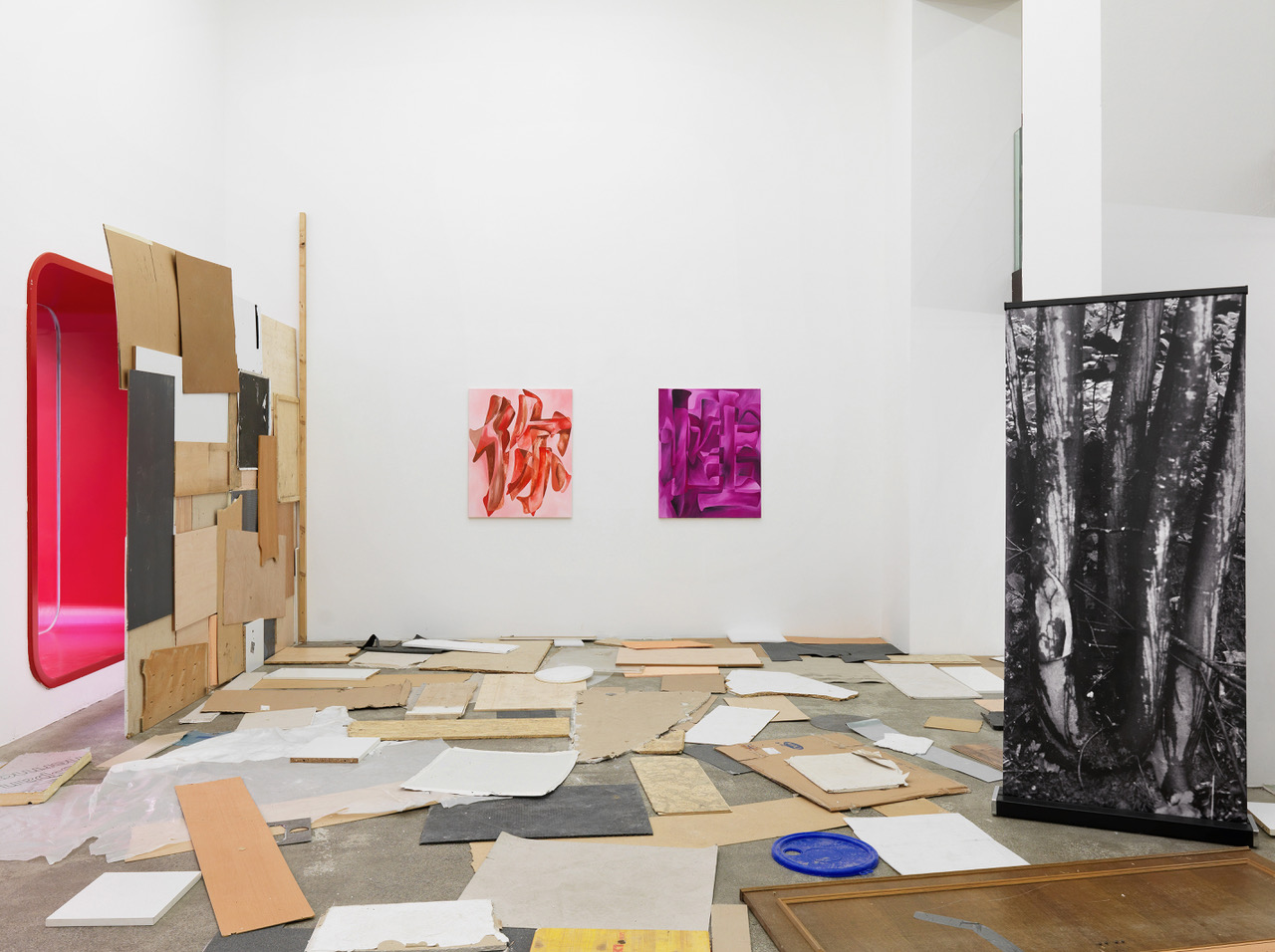 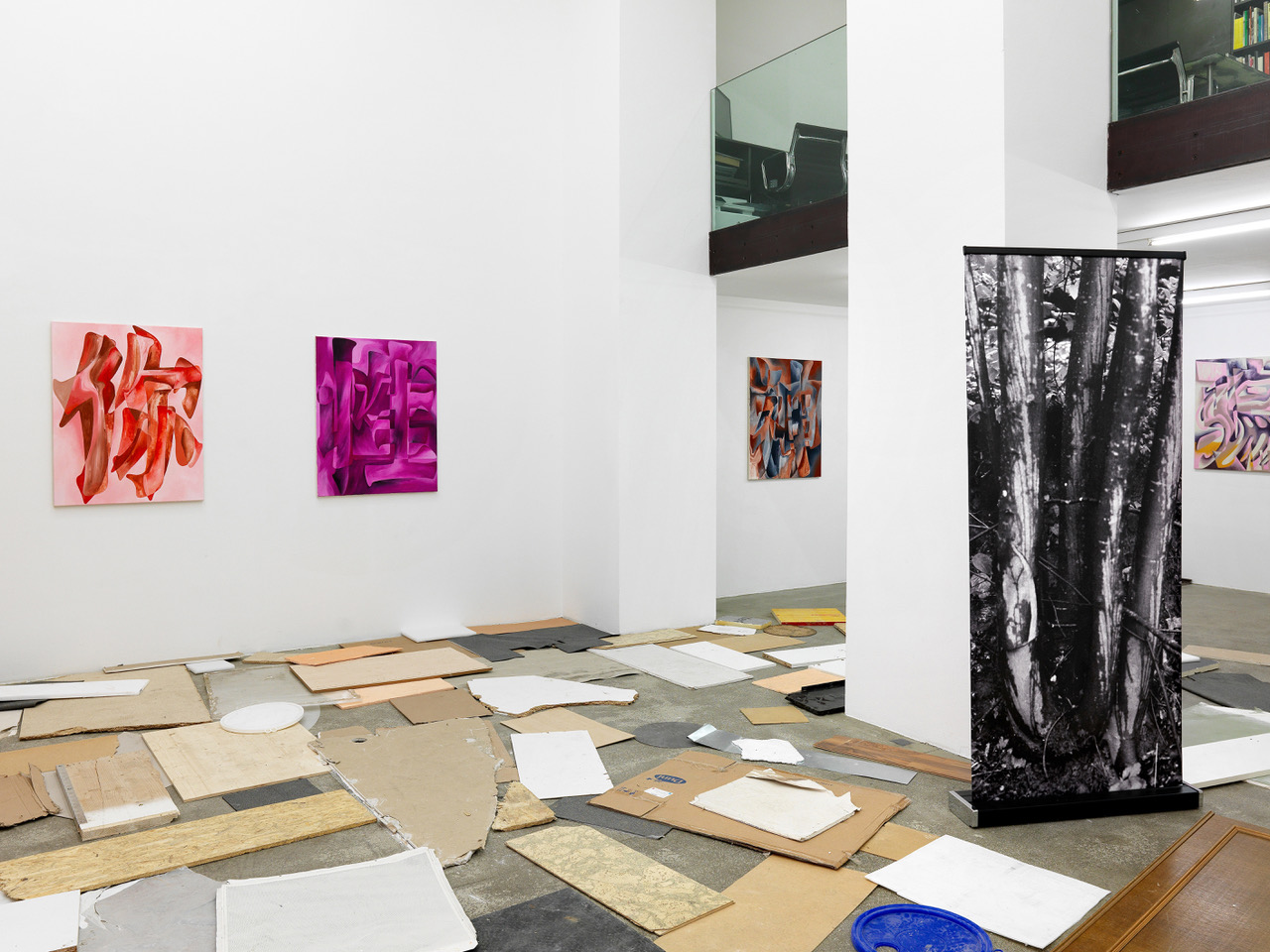 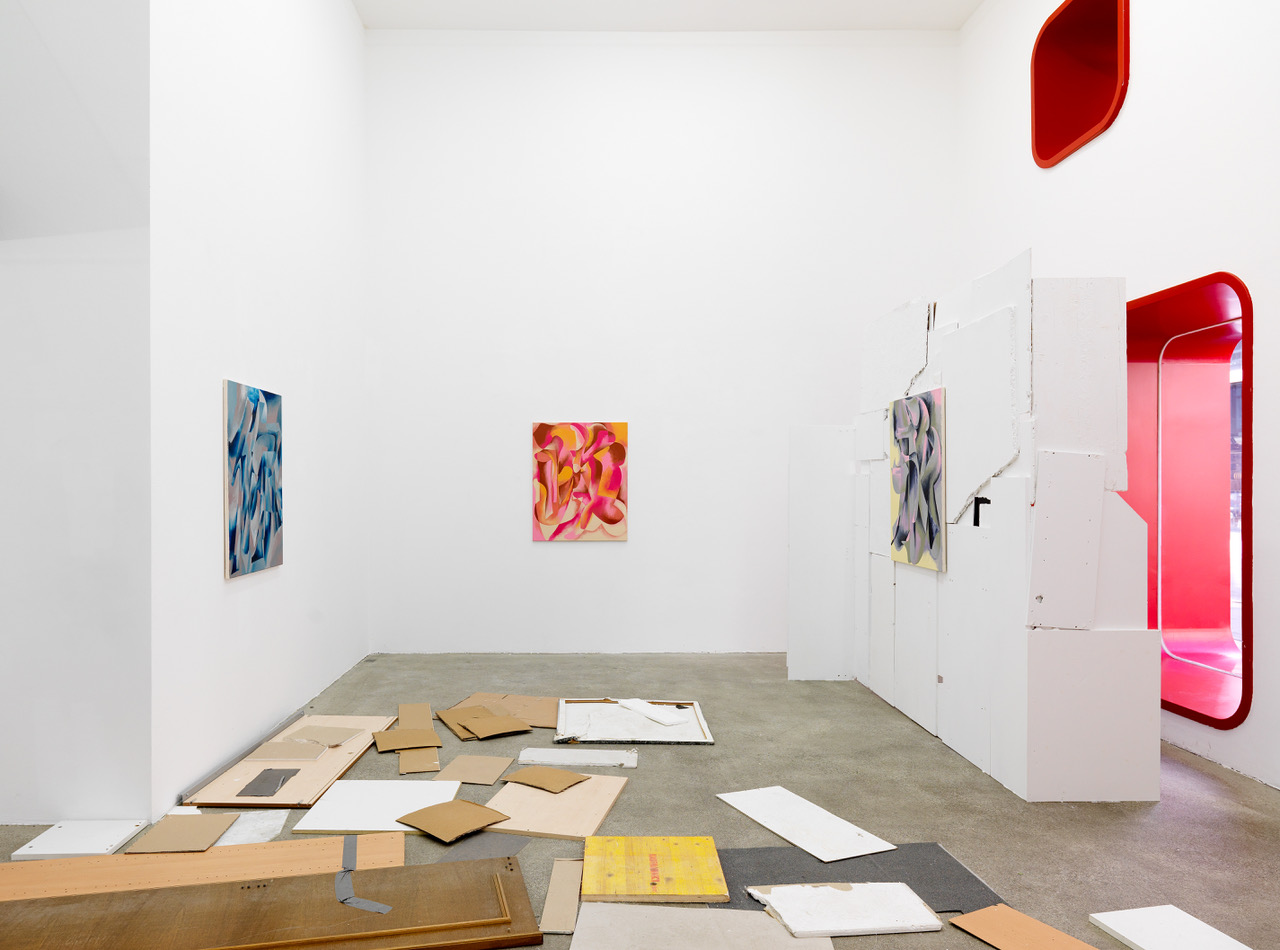 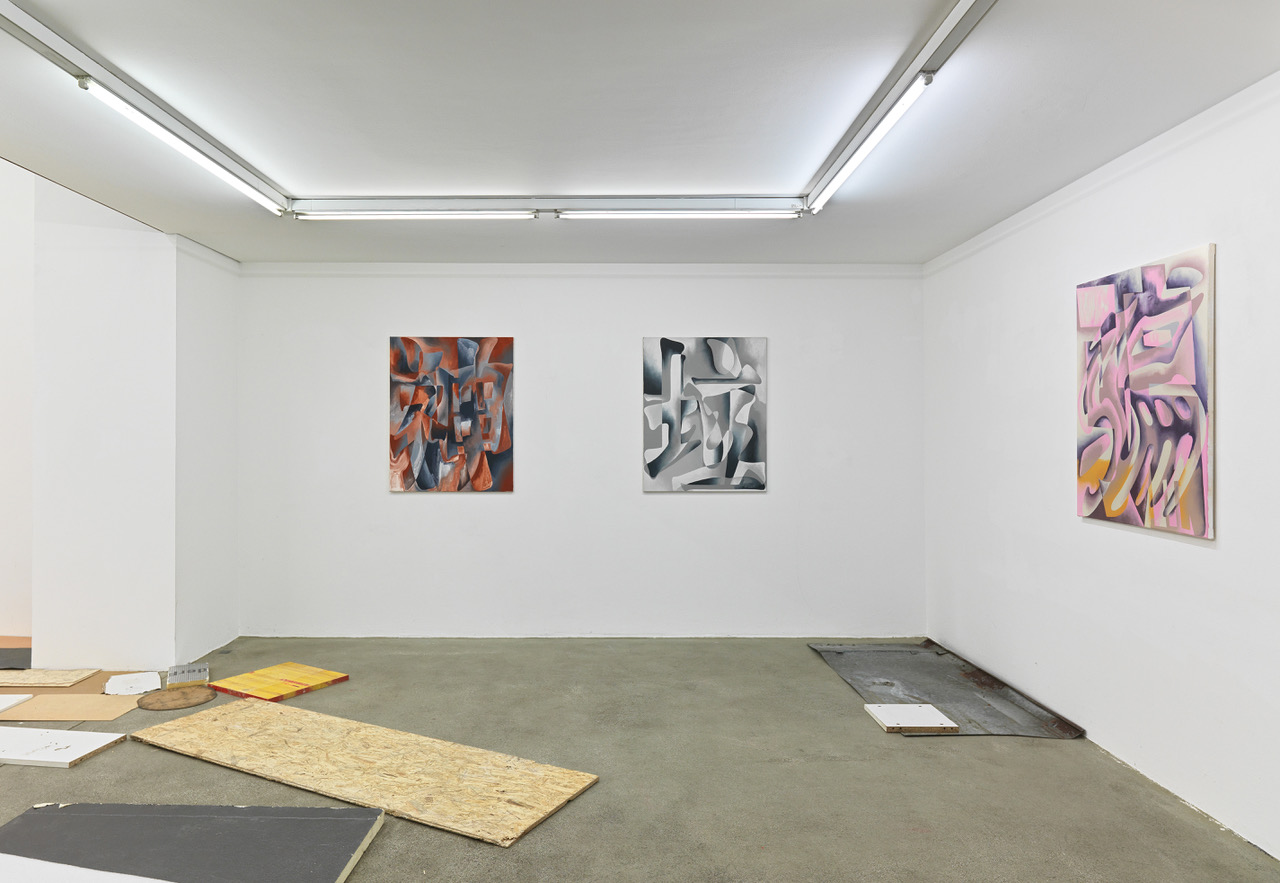 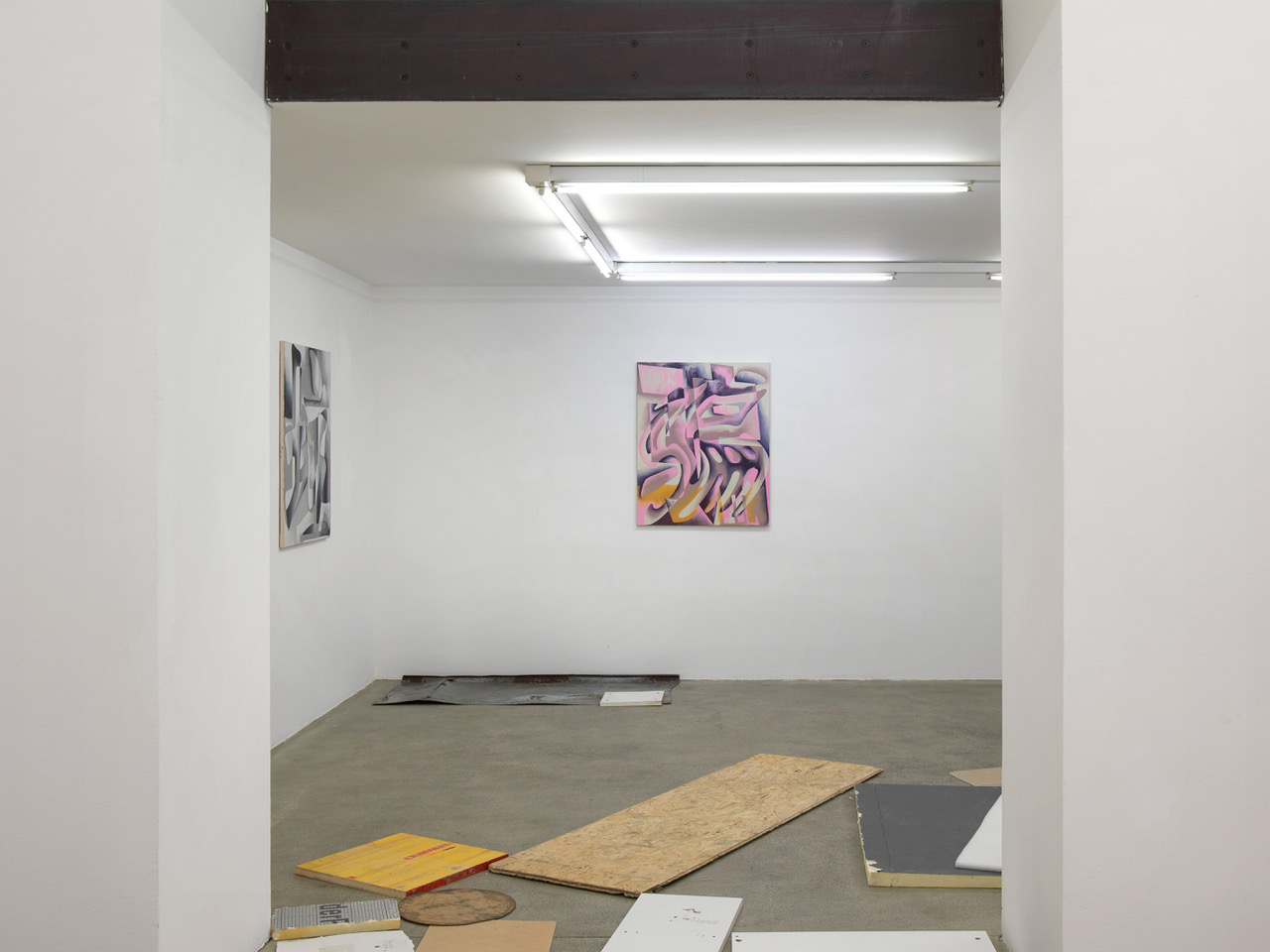 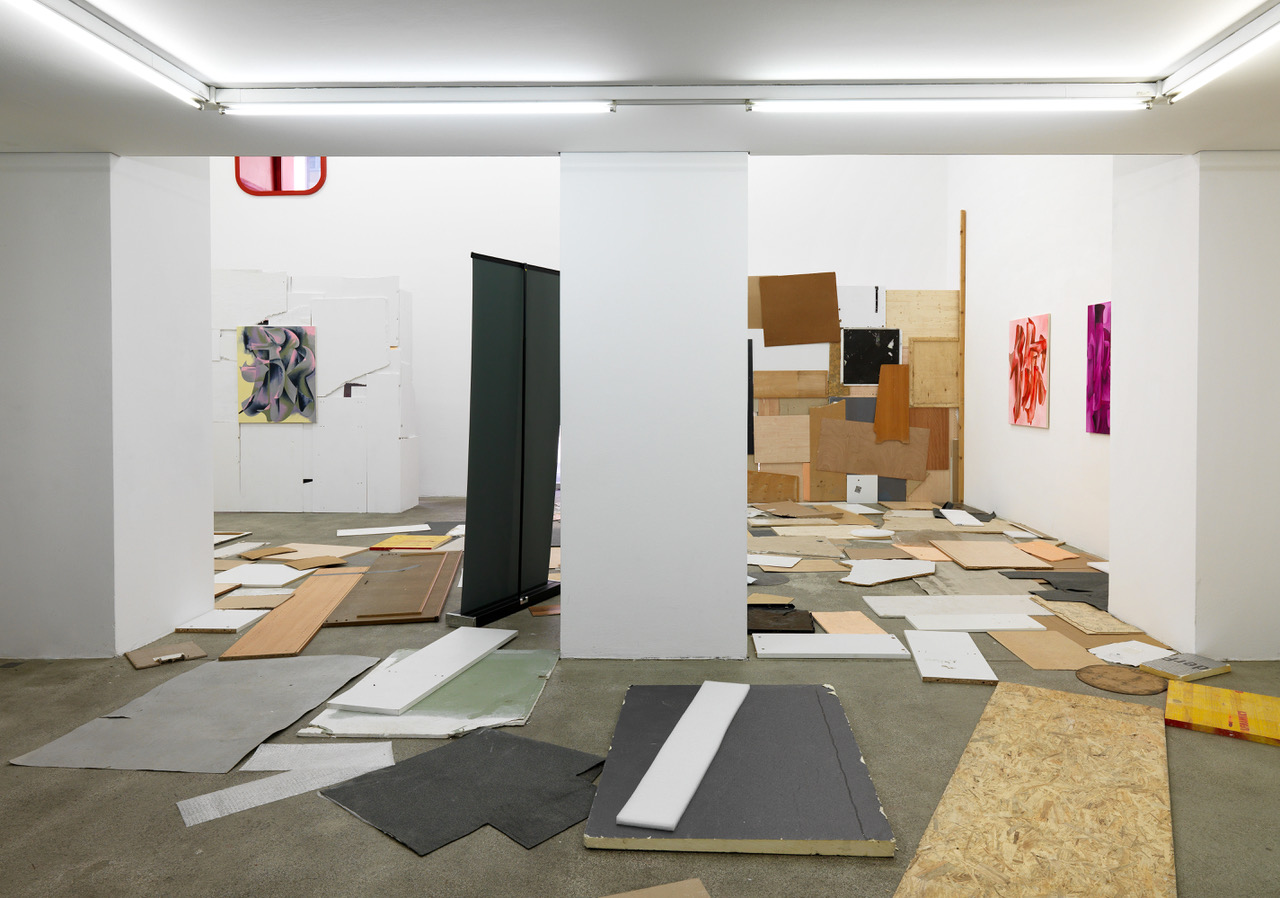 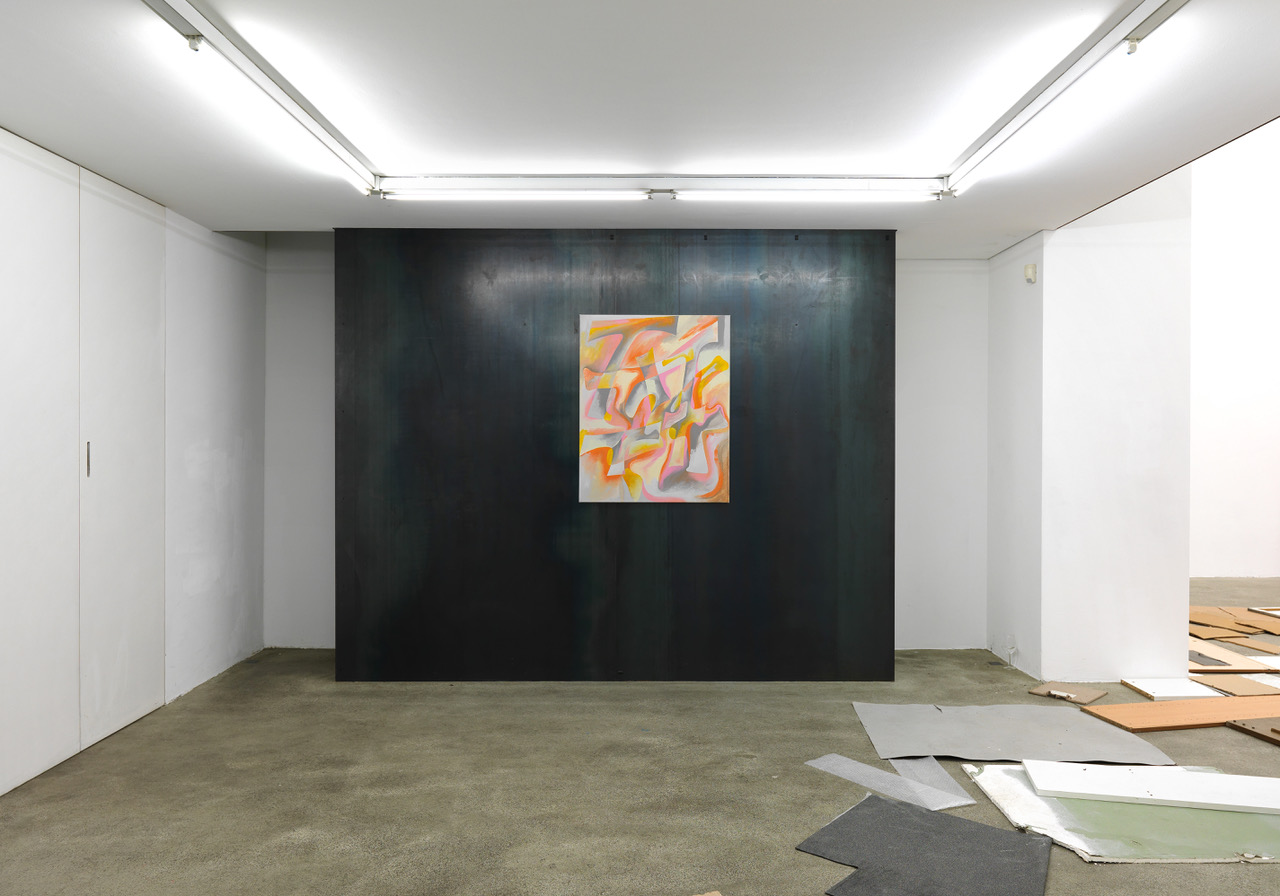 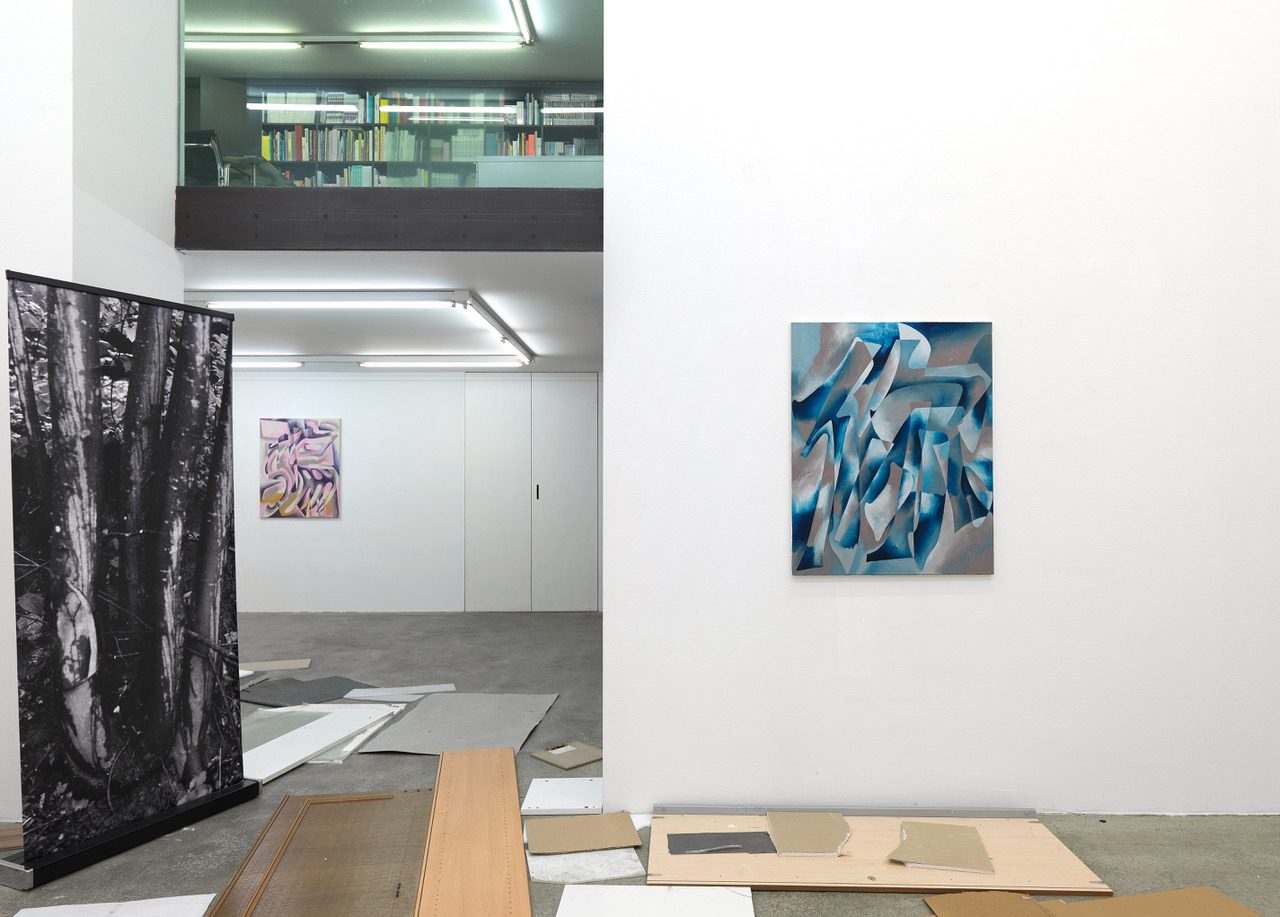 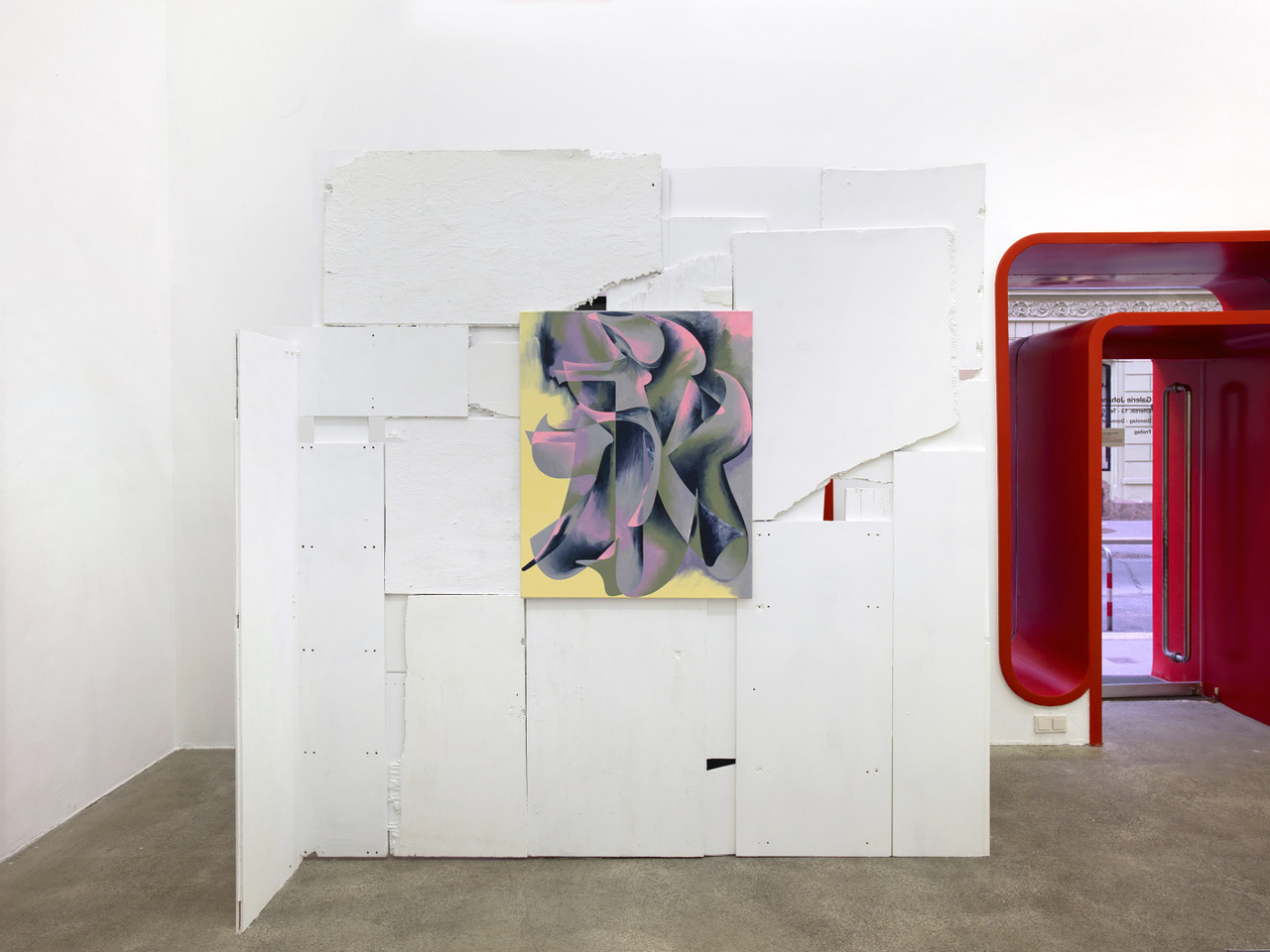 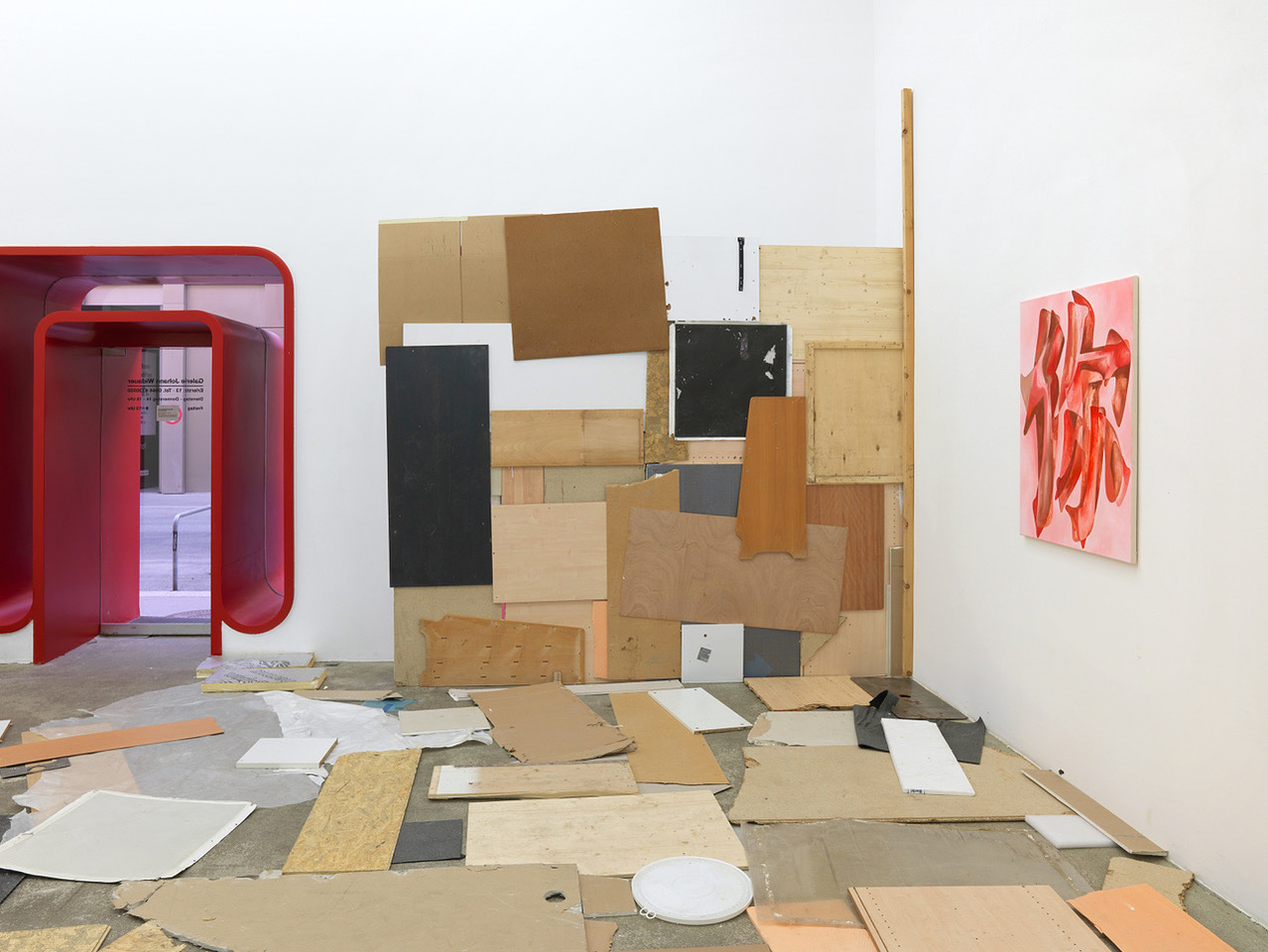 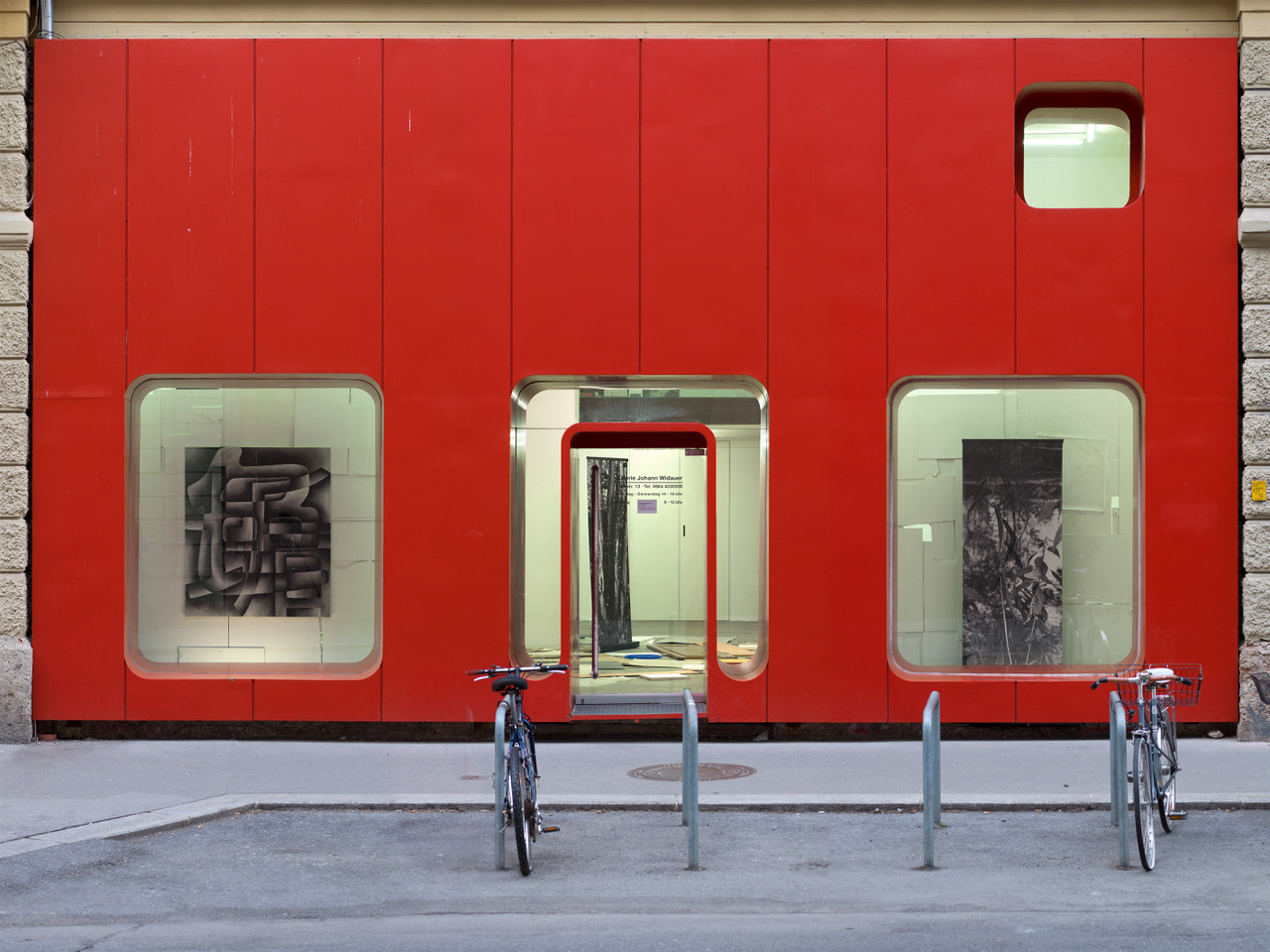 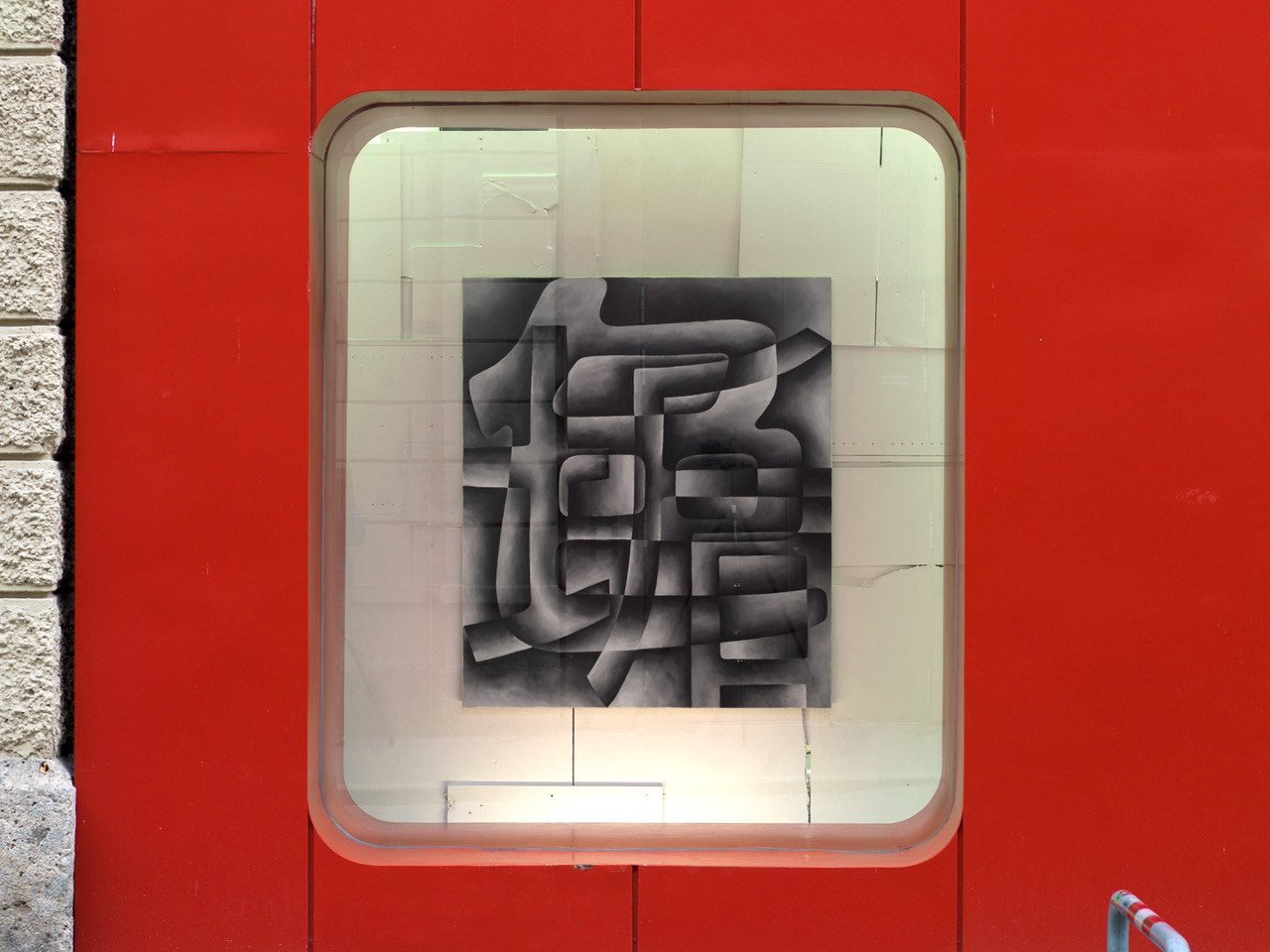 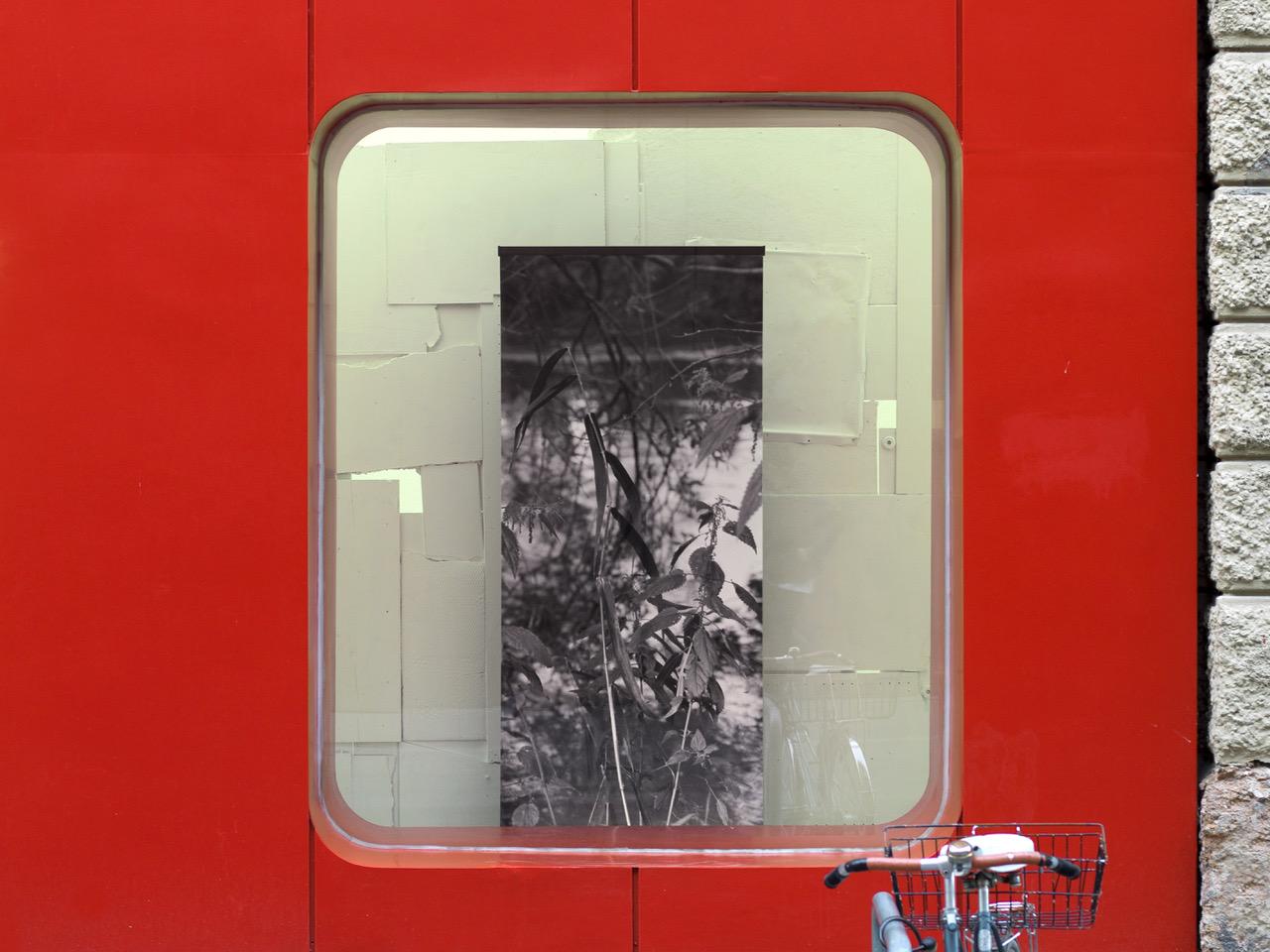 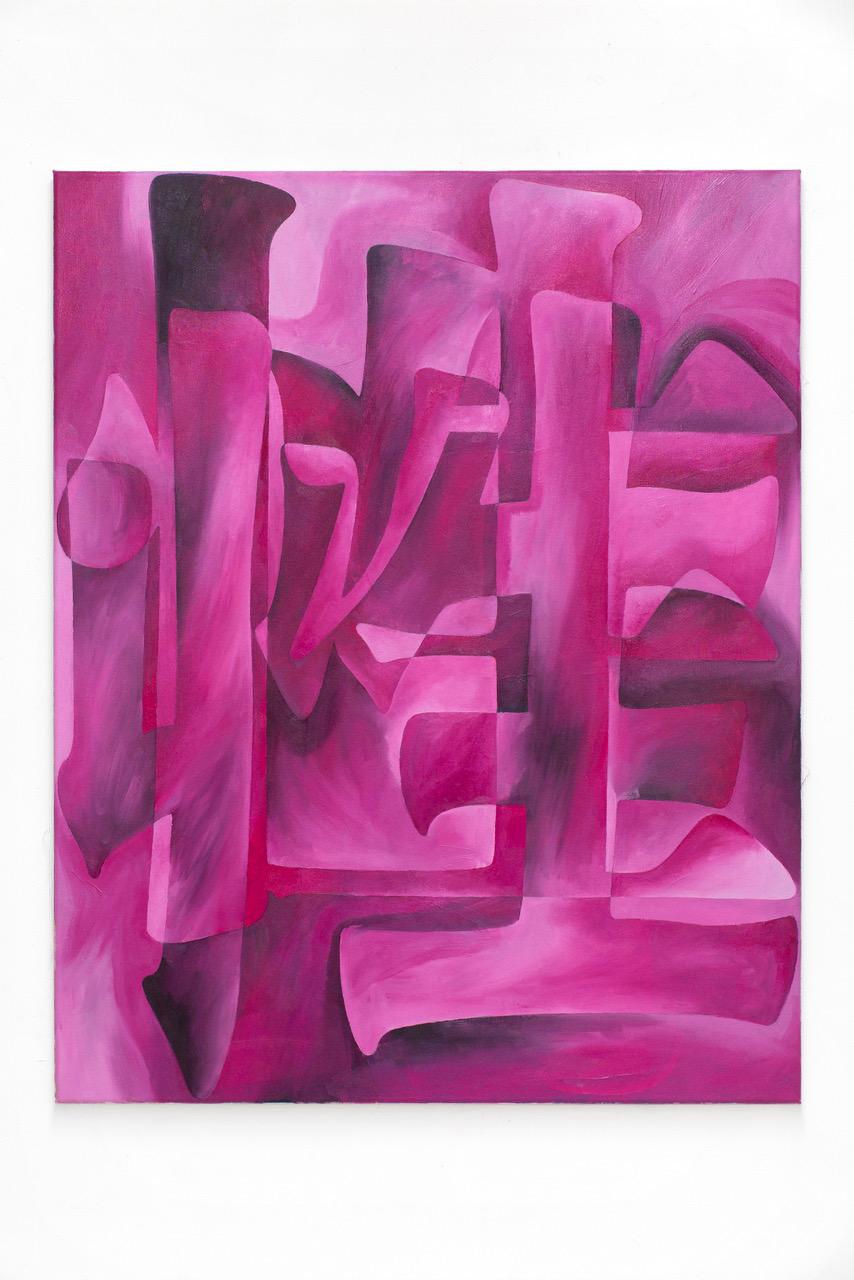 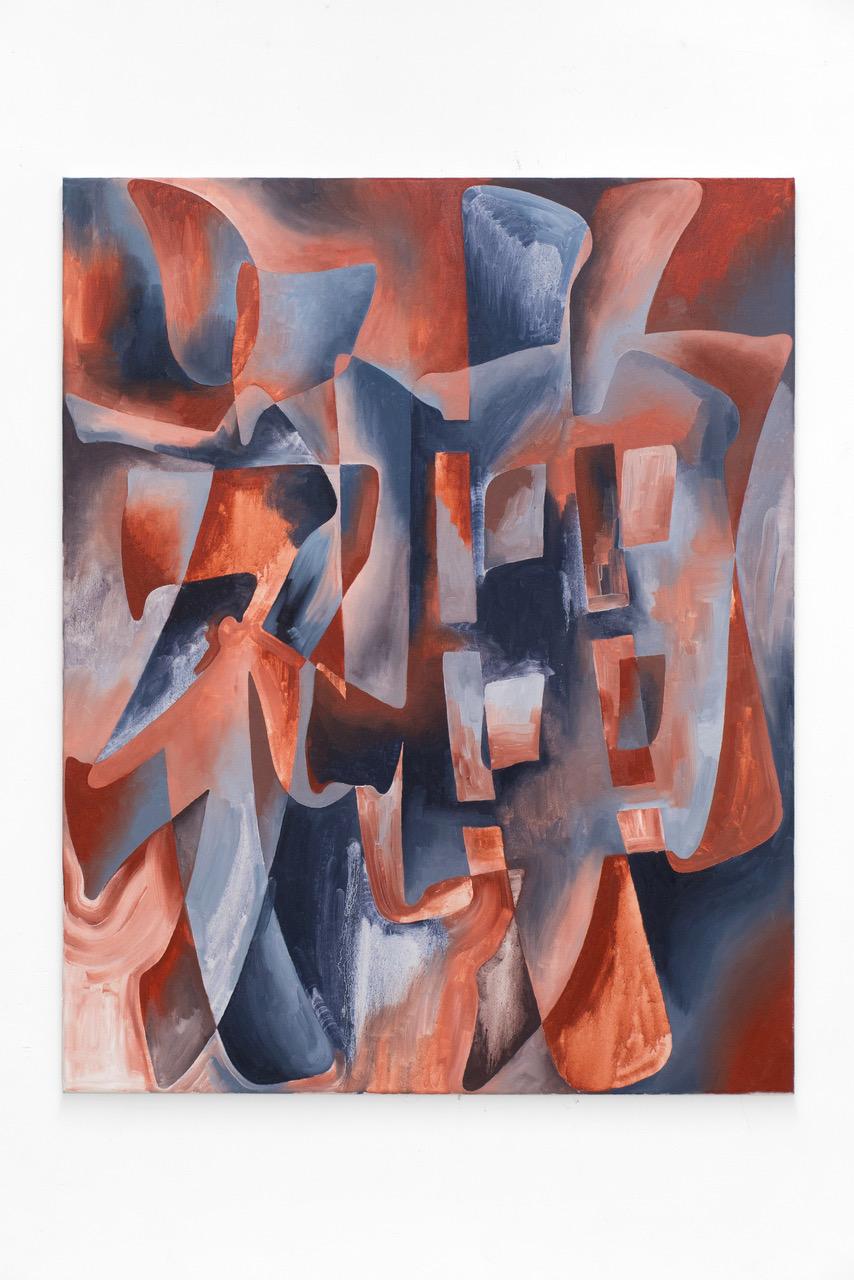 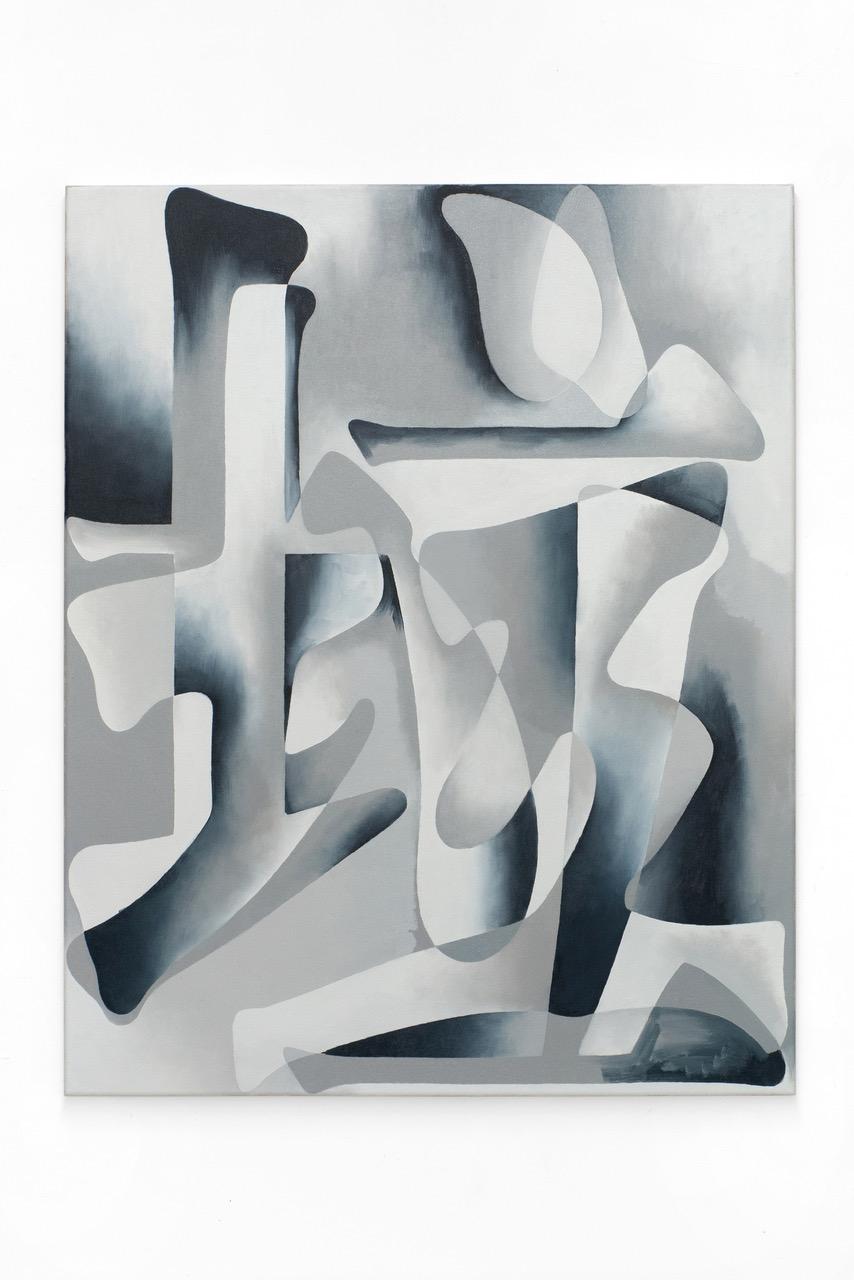 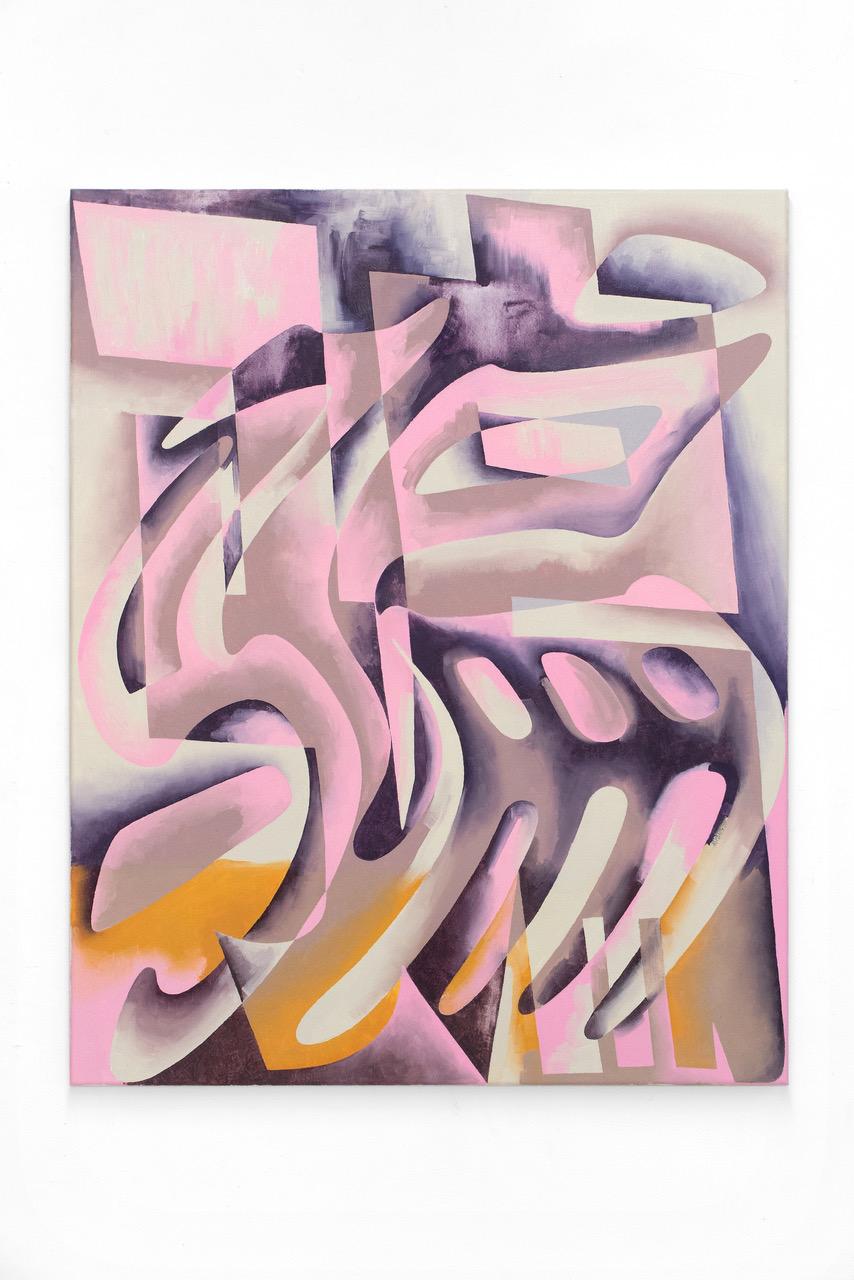 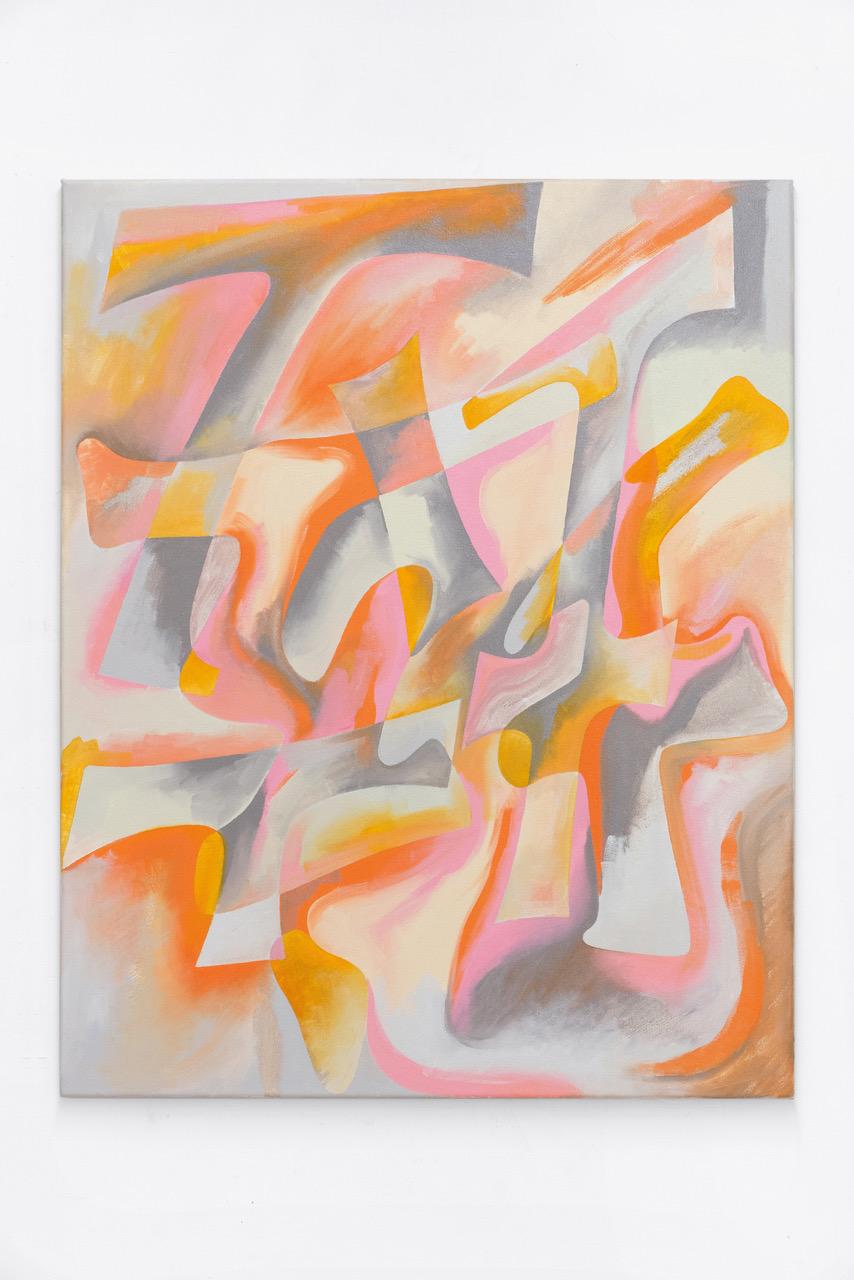 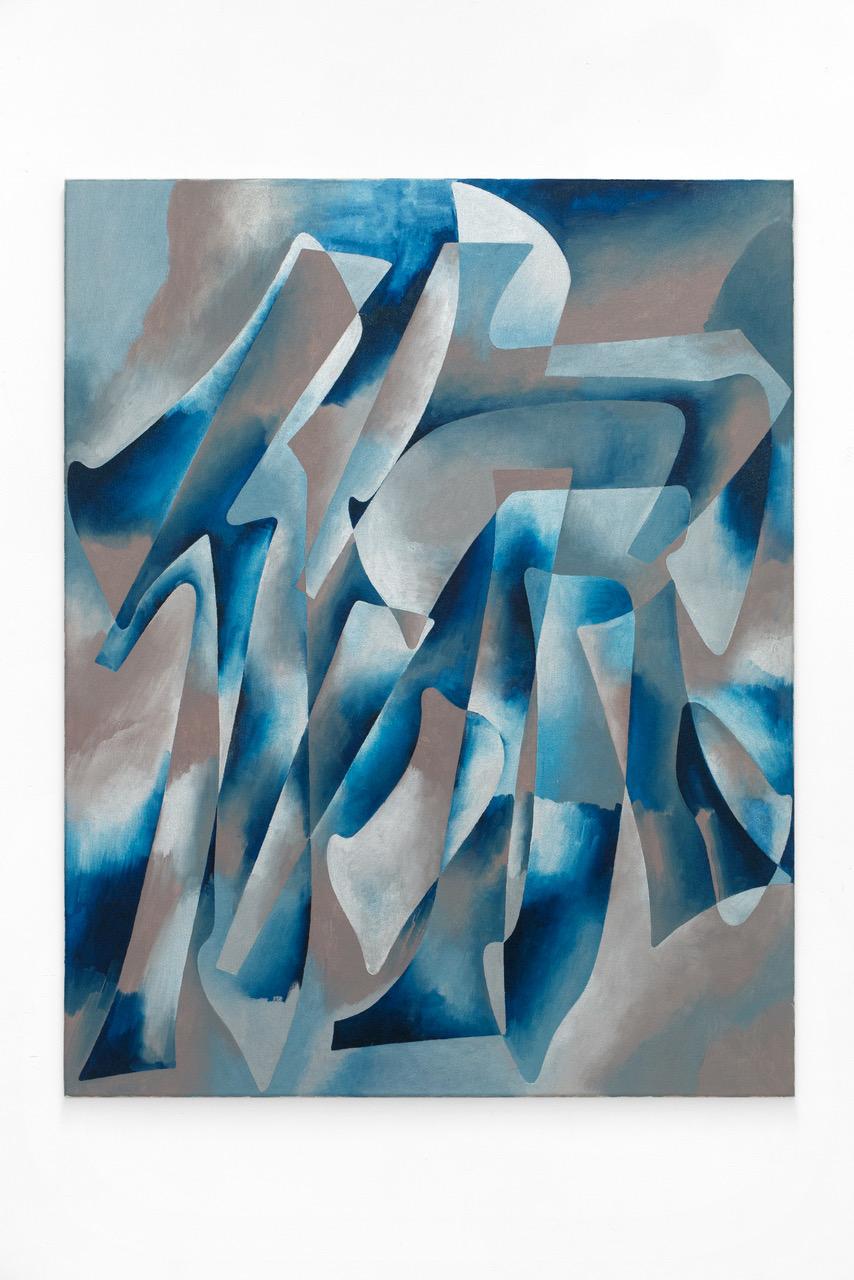 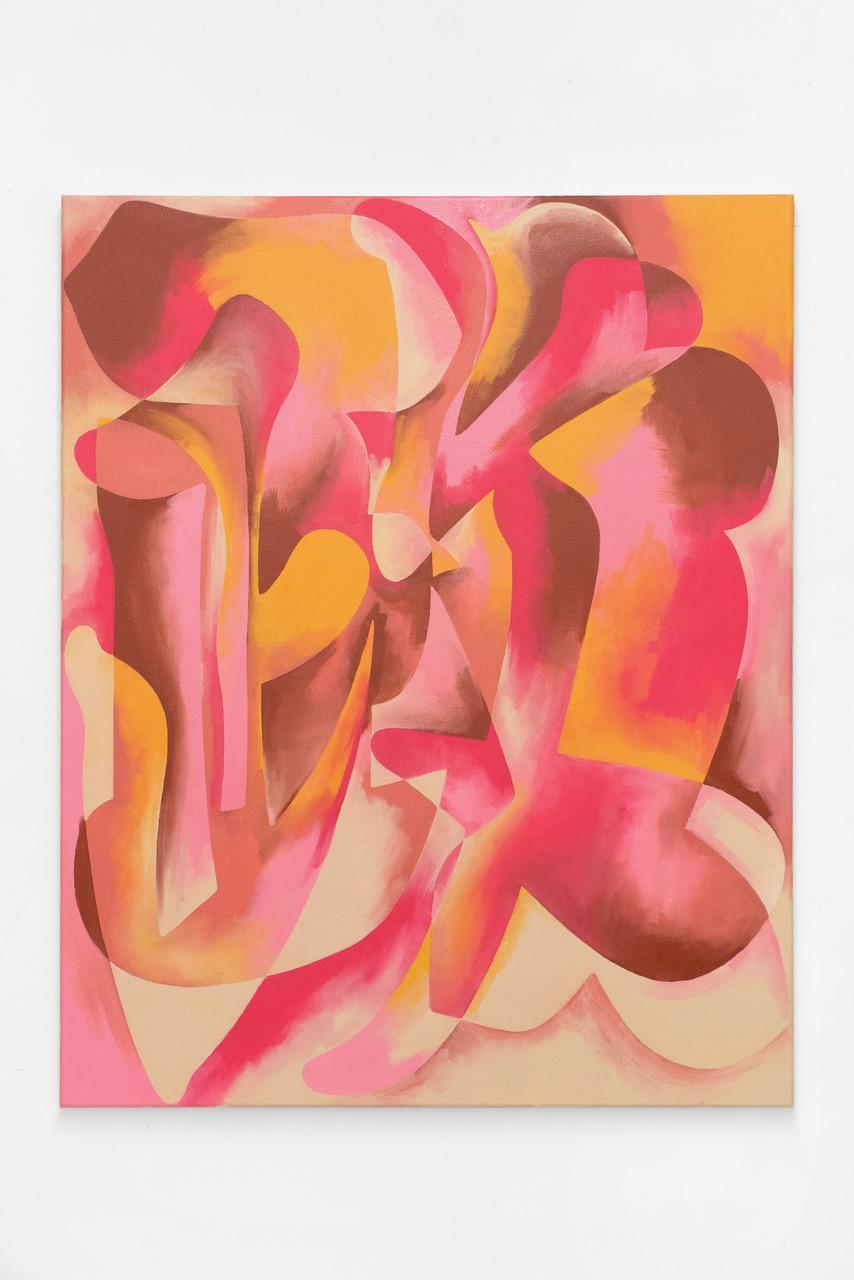 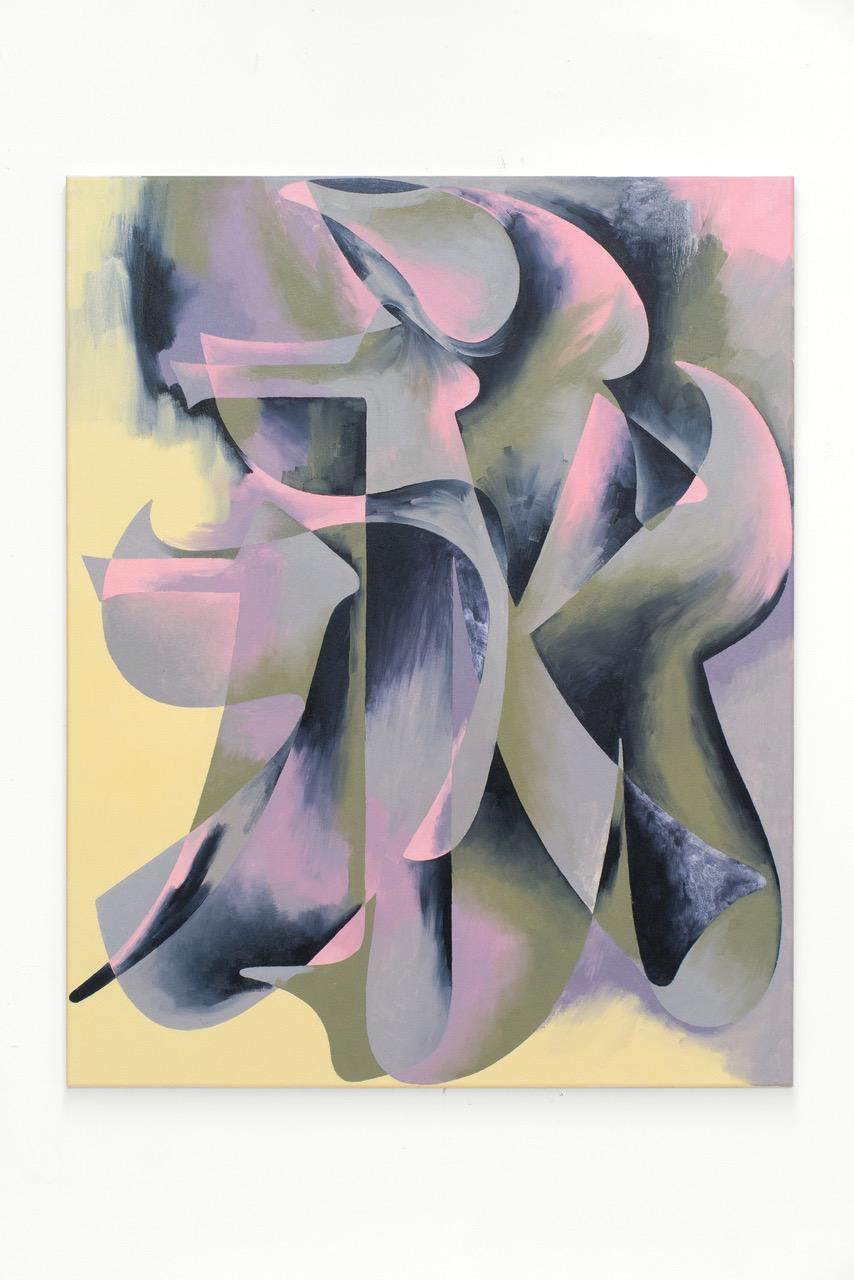 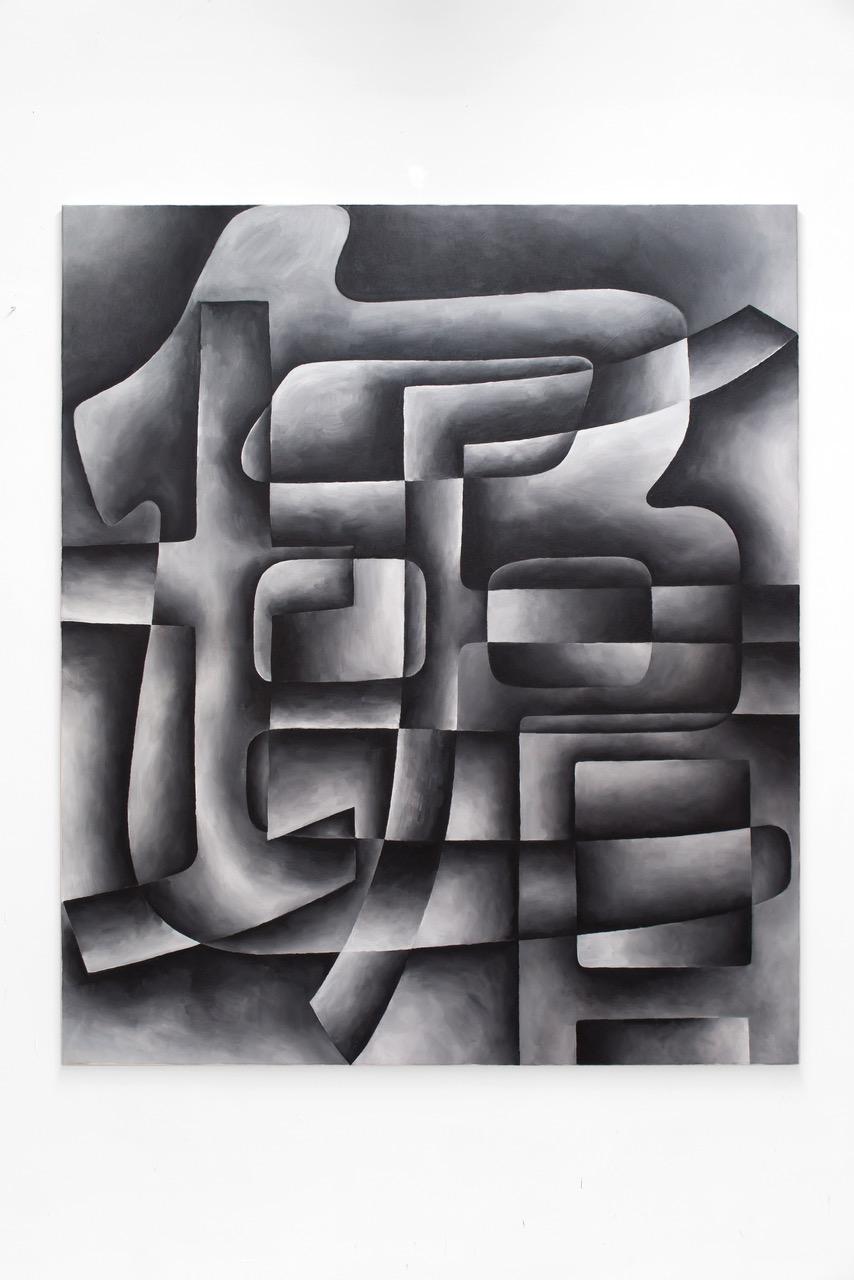 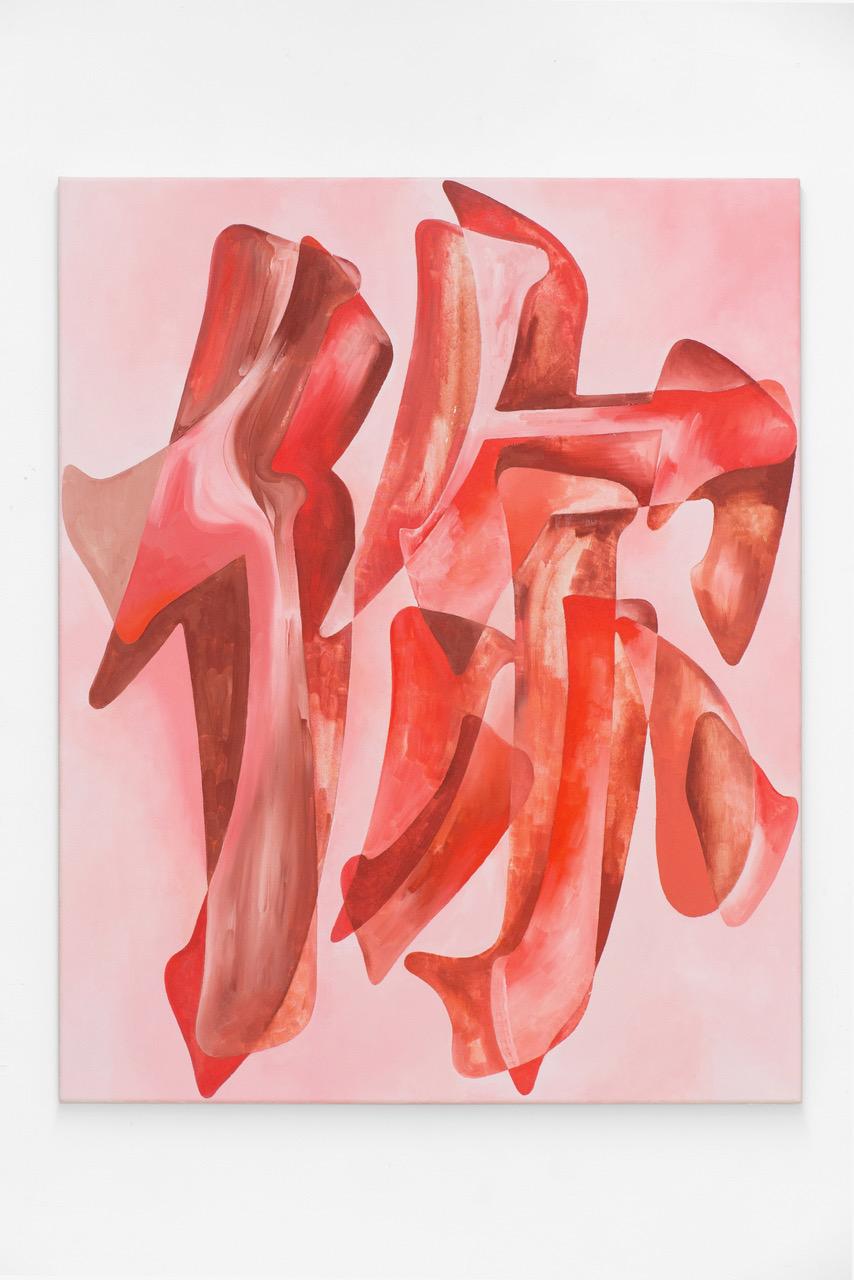 Alexander Wolff, coming from that productive, slightly Dadaistic Frankfurt scene, where in the obvious absence of a city surrounding the Städelschule – at least this is how it appears from the outside – everything seems to have been created by the students themselves – clubs, exhibition spaces, yes, even cooks emerge from there – opened a space immediately after moving to Vienna, began publishing a magazine, founded a band, did everything, so to say, fervently and at once, so that I was thoroughly astonished when he told me, one day as we coincidentally found ourselves on the same plane (we had both moved to Berlin by this point), that he had used the few hours delay of the plane to make a new painting. He was, as I found out, working on a series of paintings on towels, whose compositions were derived from the towels’ ornamental patterns. I was astonished because his general productivity – I first met him, for example, as he was vacuuming his exhibition space, which I had come to see – seemed to preclude that particular, square-shaped, labor-bound activity of painting. I visited his studio for the first time when he was preparing for the exhibition at Widauer Gallery in Innsbruck - and between these encounters more than ten years had passed. I arrived a half hour early, time he would otherwise have used to finish the lower corner of the painting he was working on. So he packed everything together, without impatience, (aired the room, cleaned his brushes, screwed the lids onto the paint glasses, cast a last examining look at the lower corner) and deferred completion to the following day. And I recalled a remark of one of Manet’s contemporaries, who in his biography lamented the fate of late nineteenth century painters, who ever only painted. Day in, day out, and when they went on holiday, wherever they went, it was only to set up their easels and seamlessly continue. For it is the field of the artisanal, painterly production of pictures, not that of the sketchy drafting of an idea, that one enters in this studio. This field comprises first of all, the general idea, the reason, so to say, for beginning a series of paintings as an investigation, the sketch, the setting up of the color palette, and the execution. Working in this way, the paintings emerge as a series; they are the speech, the articulation, each time taking on a new form through their application.  In the series for this particular exhibition we are in the realm of signs, barely recognizable as such, which even for those who can read Chinese characters – for Chinese characters are the basis of this work – are not easy to decipher. From these emerges a world of various geometric bodies, hollow forms and curvatures, whose connection to one another is not sculptural in the sense of giving birth to a whole figure, but rather whose individual constituent fields, composed in an optical sense, as schooled by European Modernism, are assembled. The signs themselves must also first be found. Therein lies a high discursive risk—each sign means something or could mean something – Alexander Wolff can’t be completely sure – which is also part of the fun. To paint, departing from the assumption that a “you,” a “now,” “pizza” or “sex” is being transmitted. Conversely to this risk, there is a calm security residing in this source material. For these are all characters that have been formed over millennia of debate and negotiation regarding the relationship between the line and the space within a square frame, in order to develop a special harmony within it. To disturb this could be disrespectful, like a bad joke about foreigners, were there not that incredible sense of being excluded from something, of being, oneself, the foreigner, which struck him during his stay in Taiwan, as he found himself thrown before these signs. These are all visual barriers that present themselves within the sign to every illiterate person, a barrier between a person and the world that can be circumvented with the YOU, the NOW, with PIZZA or SEX, but which arise when you want to move on from there, barriers before which you stand again and again the further you get. In this fascination, these turn into another joke, this time not about, but rather with the foreigner, for example when the clueless, non-turkish speaker attempts to decline the word “lentil” (mercimek, thus merciyorum, merciyoruz, and so on).

Subsequently there are color spaces that form the transition from one painting to the next. There, where there is painterly curiosity: if it works. One can find these color spaces in others’ paintings and try them out, forming an idea, which can also be found in some other sign out in the world. Alexander Wolff has also, at times, painted large wall paintings only with colors derived from materials from the surrounding environment, street dust, dirt, Berlin sand. And worked in the color spaces of the Czech Constructivists. Night spaces of Asian cities play their way in, again that peculiar marshy green, mostly transitioning into white or black, which has to make sense for the particular painting. There it meets the outside as an assertion.

The literary historian and critic V.S. Pritchett urged the generation of English writers (mostly men) after the Second World War, “to unself yourself,” to free themselves from the introspective gaze, to take an interest in the stories of the world and not see oneself as the emotional yardstick of the world. It seems to me, that in the work of Alexander Wolff, this advice is put to work naturally. Without wanting to go too much into the biographical, I see in many of my friends who, like him, come from former East Germany, a curiosity about everything that there is outside. It is a measureless, sometimes almost literal curiosity, that always radiates a bit of joy about everything that one can see: the colors, the cities, the languages, art, those things that others have come up with in the past, all those thoughts and solutions and responses that someone found, and all the questions.